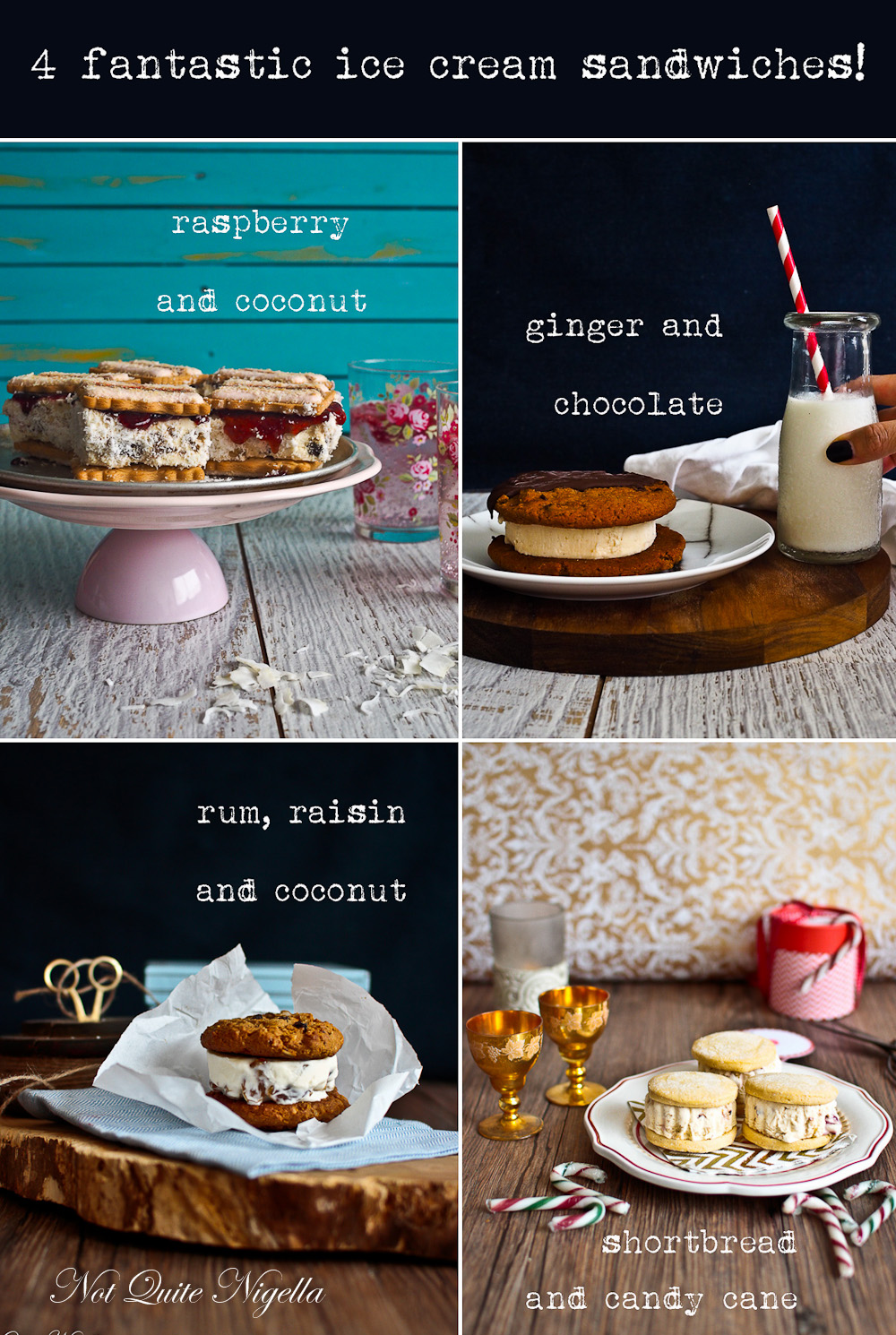 These recipes are brought to you by Woolworths Gold.

A friend of mine JY was telling me about a very real problem she has. She has isolated it down to her previous life and has even coined a term for it: Prior Life Greed or P.L.G.

"I think I was starving in a previous life so I eat everything in this life," she explained. It is also one of the things that makes her a great dining companion. Not only does she want to try everything, but she will also finish it all. 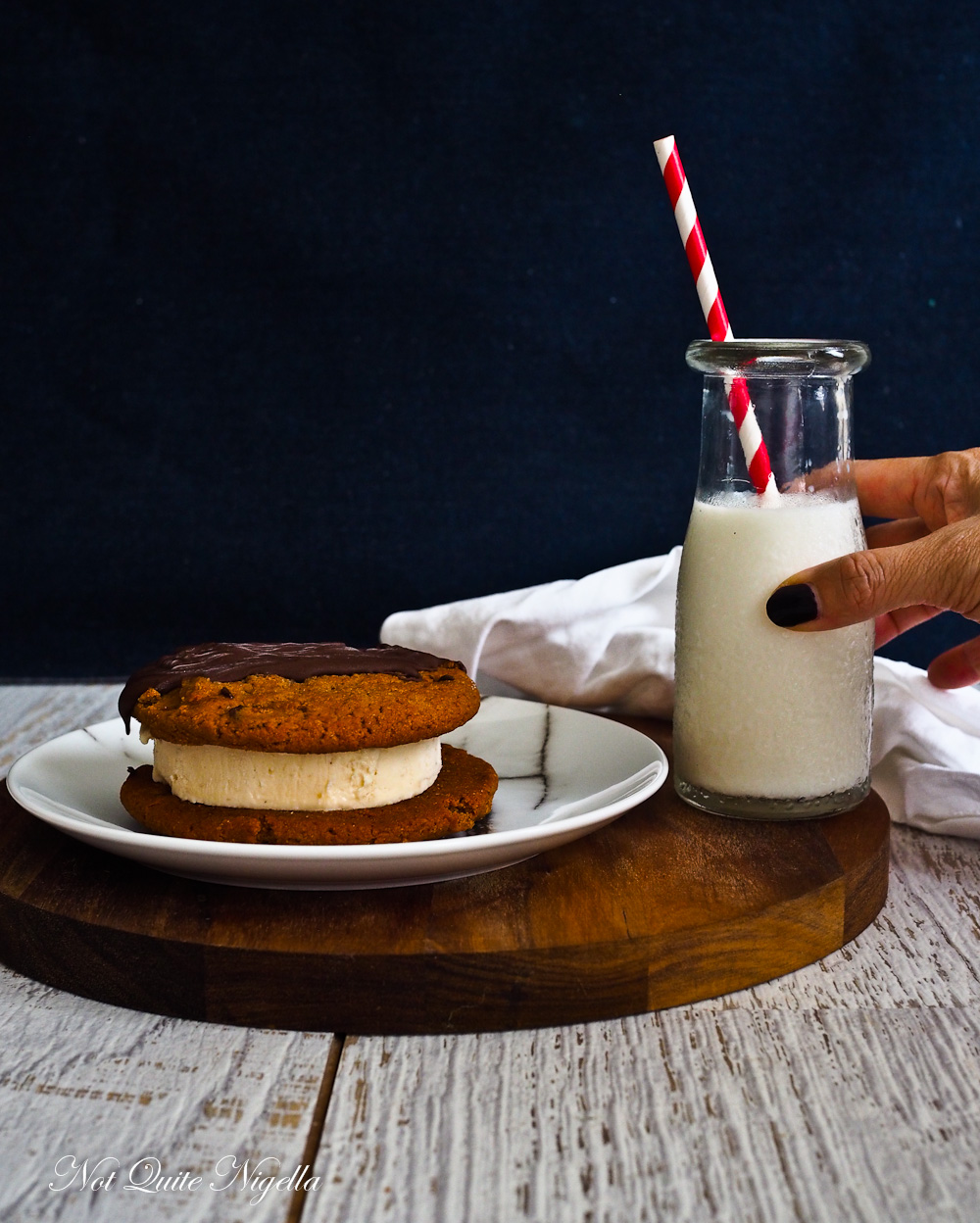 She explained it further, "My mum had to label all of our food" as she would often eat her little brother's food so he was forced to eat quickly in order to get enough and this would often result in him twisting over with stomach pains. As she was describing P.L.G. I thought that I might have a little bit of that. P.L.G. is different from F.O.M.O. or the Fear of Missing Out. It's more a fear of never having enough food. And JY explained that she has always had enough food to eat so it must have been in a previous life! 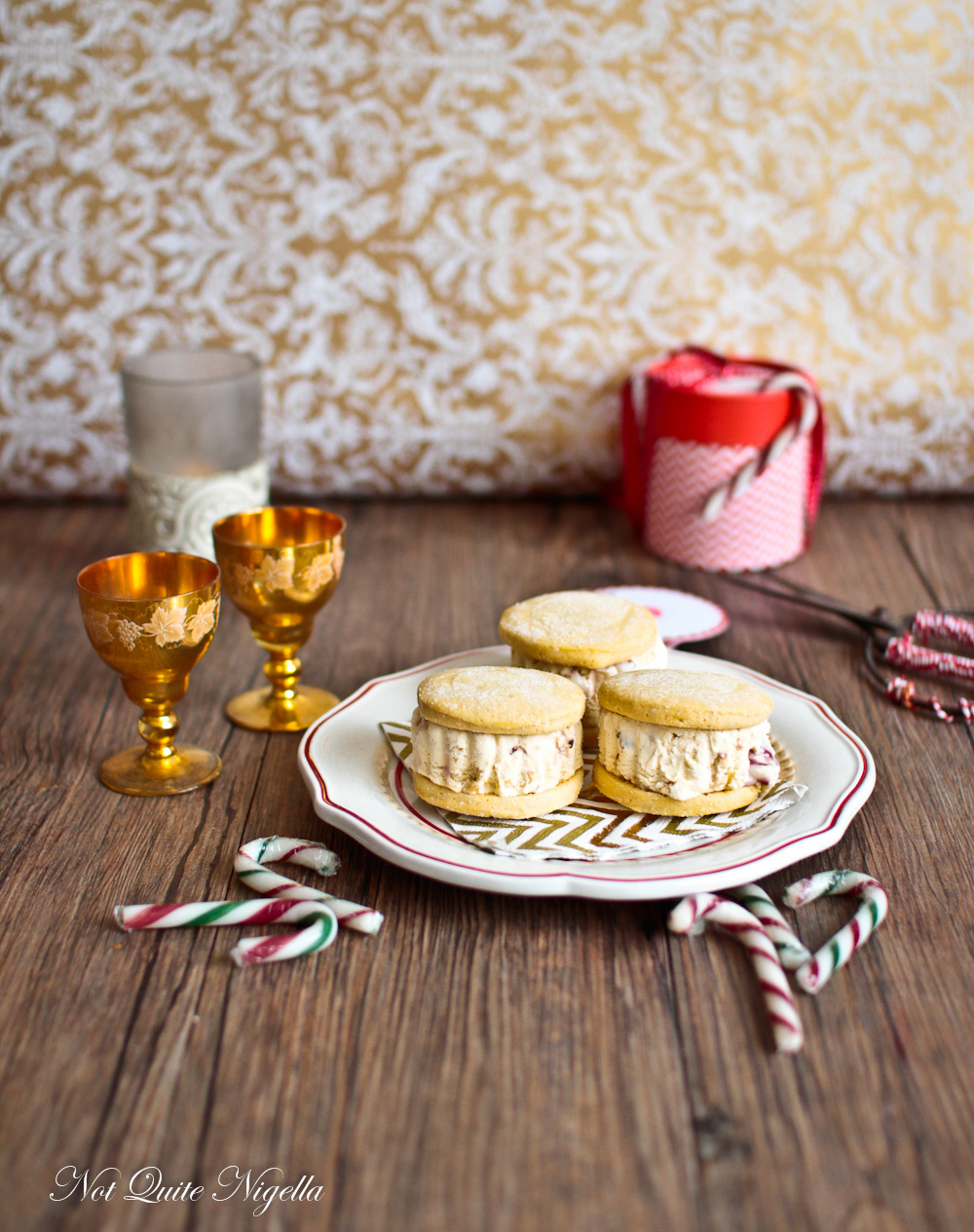 The time for eating everything and one of a PLG person's favourite seasons is of course Christmas. In Australia Christmas is always during the throes of summer so a hot roast isn't exactly practical for us. We tend to eat seafood and salads with a frozen cake or ice cream for dessert. I have wanted to do a story on ice cream sandwiches for a while now but wanted to wait until winter had passed. Certainly you can buy them but the best part of this is being able to put together a great combo where the cookie is just as good as the filling. 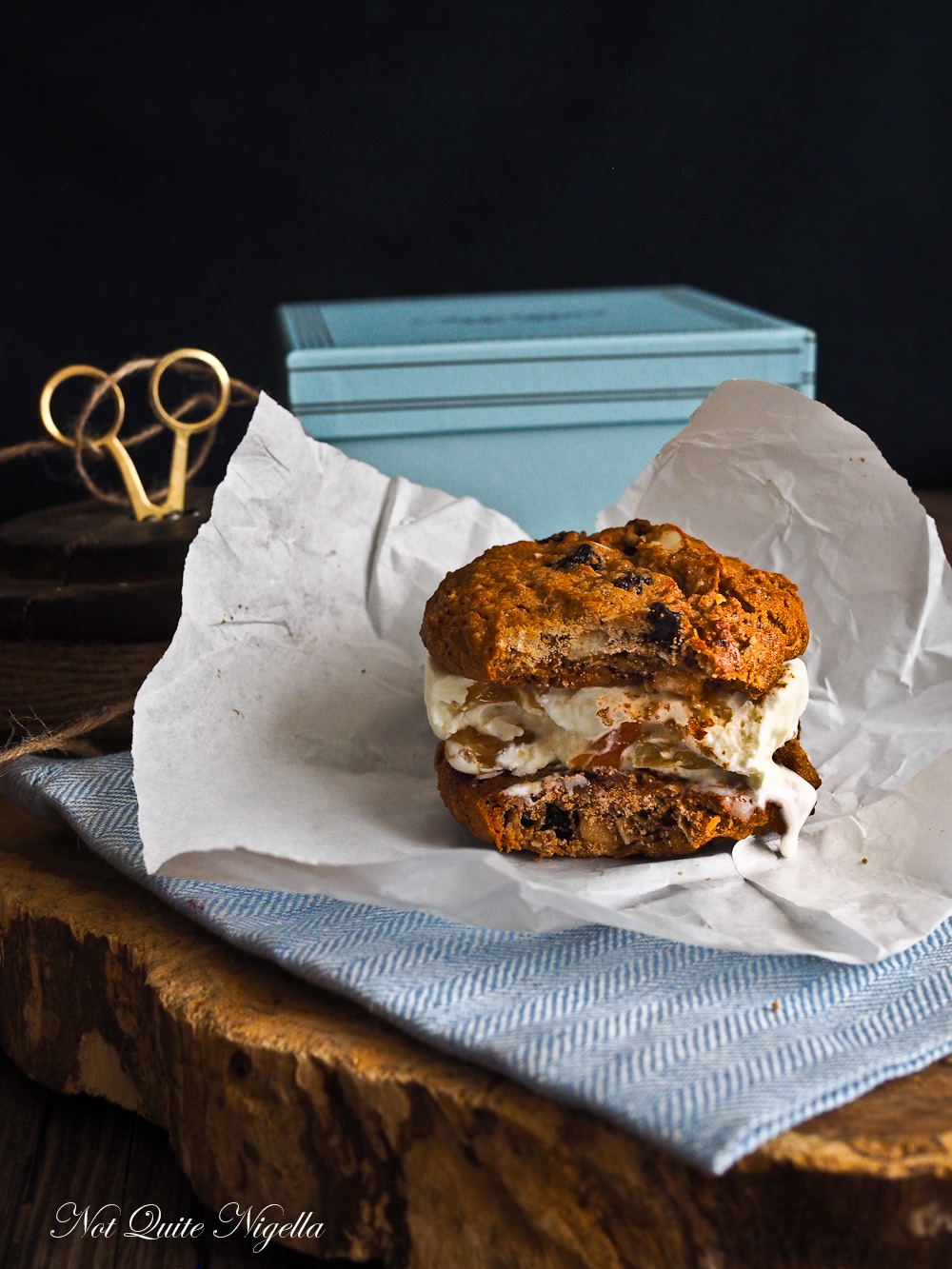 Part of the reason why I am giving four recipes is because they're so easy to put together I thought that you might wonder what sort of recipe direction is "slap two cookies together with some ice cream". I started with the new range of Woolworths Gold's "Decadent Cookies" and their boxed shortbread. 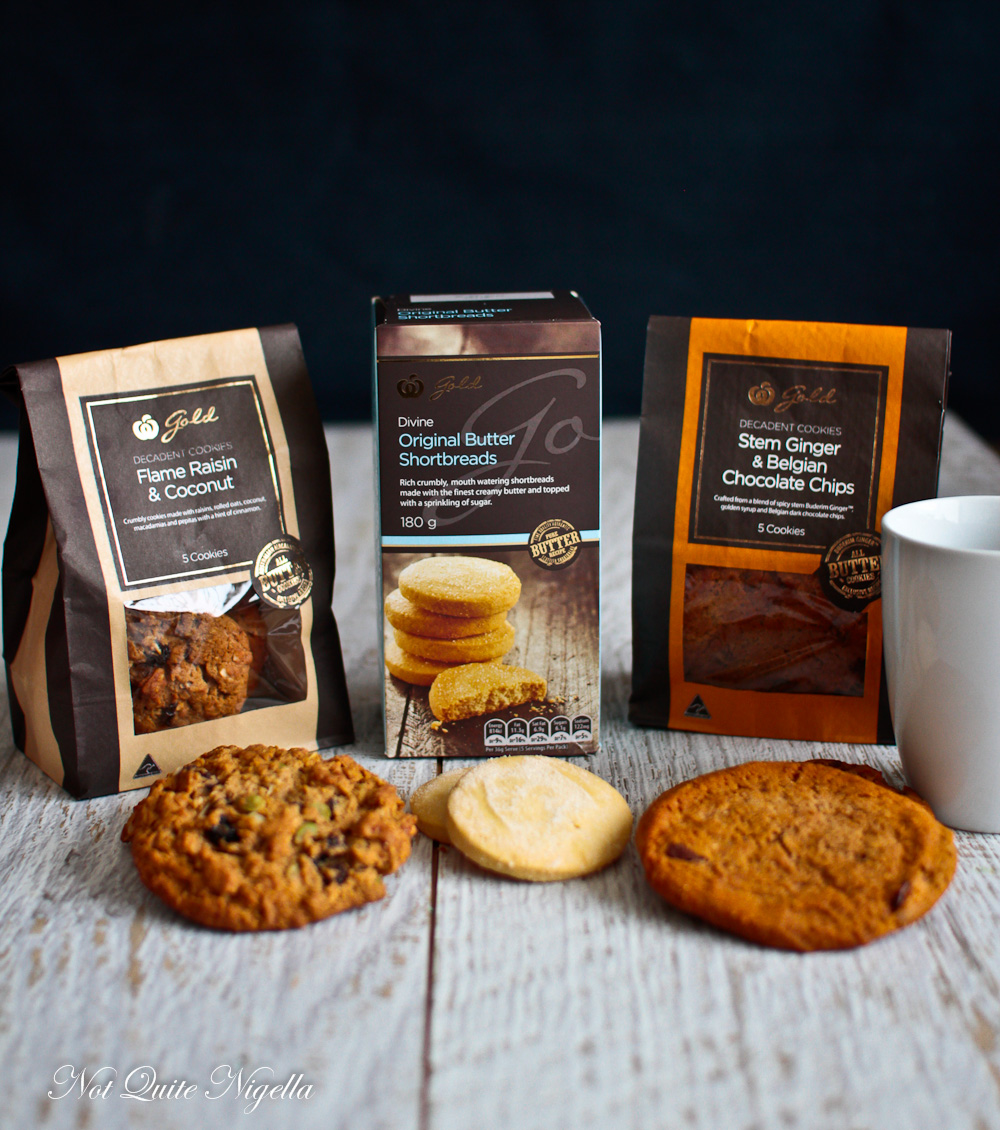 The fresh cookies are sold in the bakery aisle and I literally stood there for 5 minutes trying to decide on the two flavours to buy as they all sounded so good. There is Belgian Chocolate & Amareno Cherry, Stem Ginger & Belgian Chocolate Chips, Flame Raisin & Coconut and Soft Amaretti with Cranberry & Almond (and a tip if you are eating them by themselves, heat them up a little bit so that they are warm-yum!). So I did what anyone with PLG would do and bought them all because what if I had missed my favourite flavour? The Divine Original butter Shortbreads are in the biscuit aisle and are made in Scotland using butter in a Scottish shortbread recipe. And they are as the name suggests, divine. 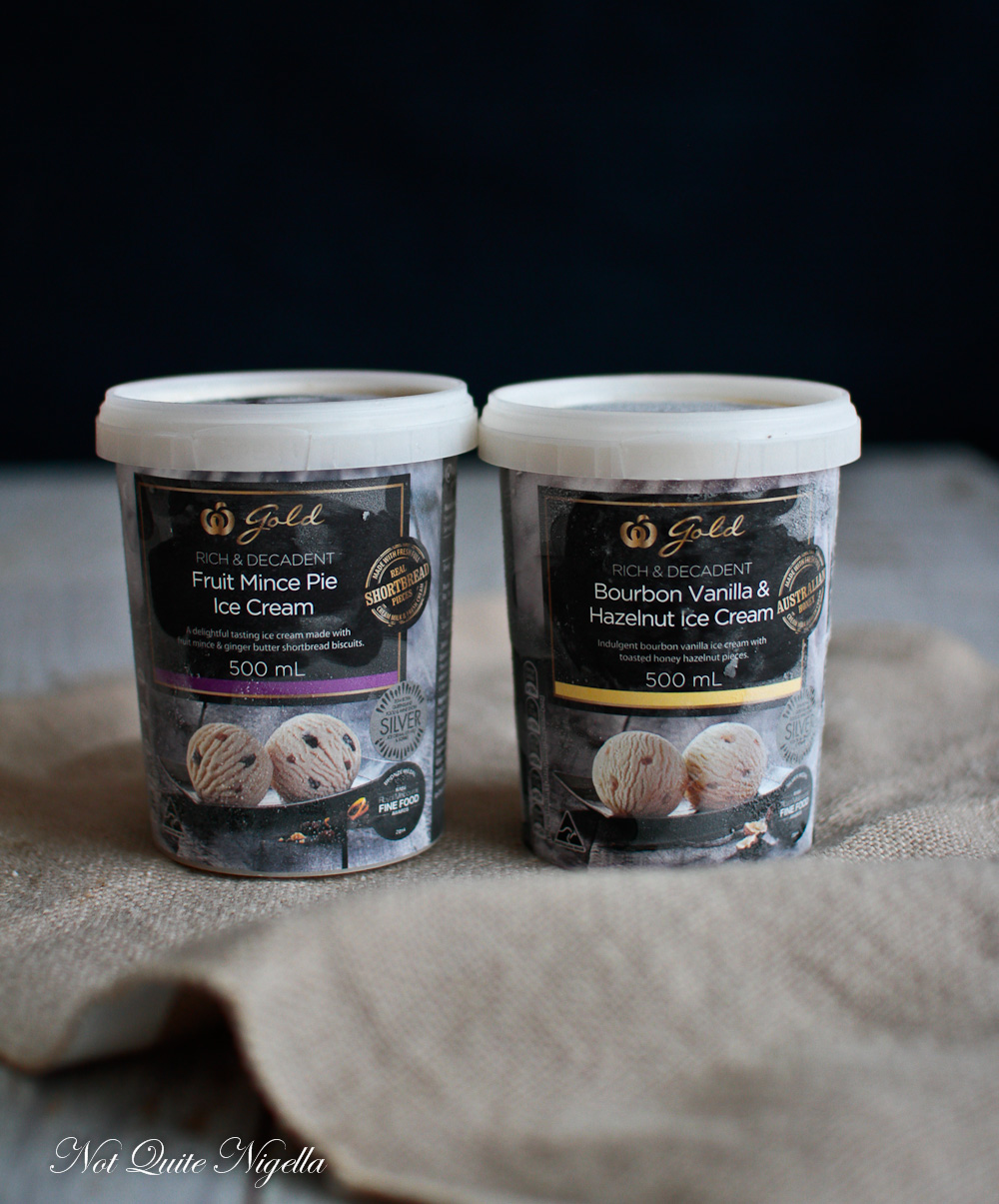 I filled the ice cream sandwiches with a mix of home made ice cream and the Woolworths Gold Fruit Mince Pie Ice cream made with real shortbread pieces and the Bourbon Vanilla and Hazelnut (an award winning one that nabbed Silver at the 2014 Royal Queensland Food and Wine Show).

So tell me Dear Reader, do you have or do you know anyone that might have Prior Life Greed or PLG? How about a Fear of Missing Out? Do you have a favourite combo of the four? And what is on the menu for Christmas this year for you? 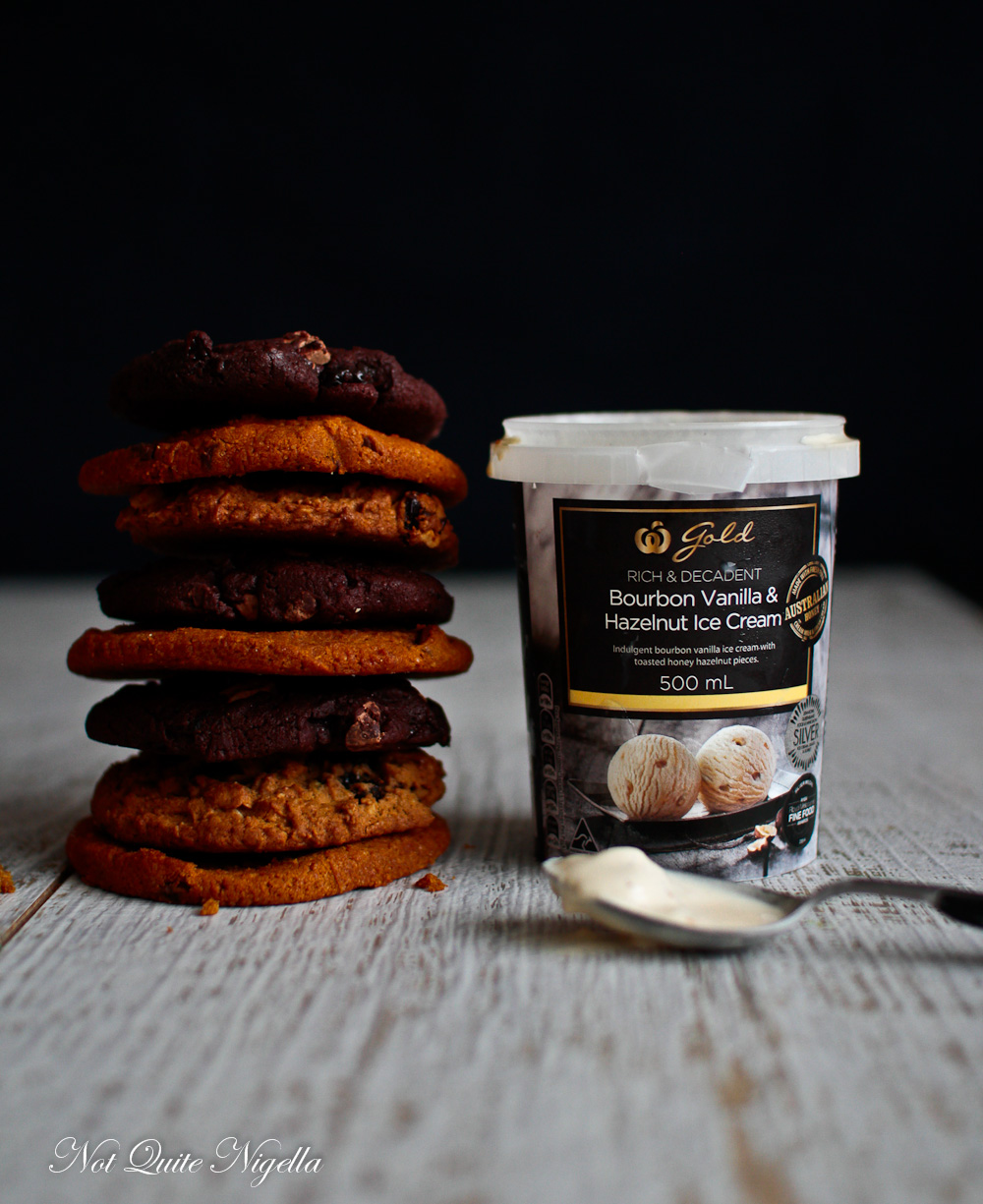 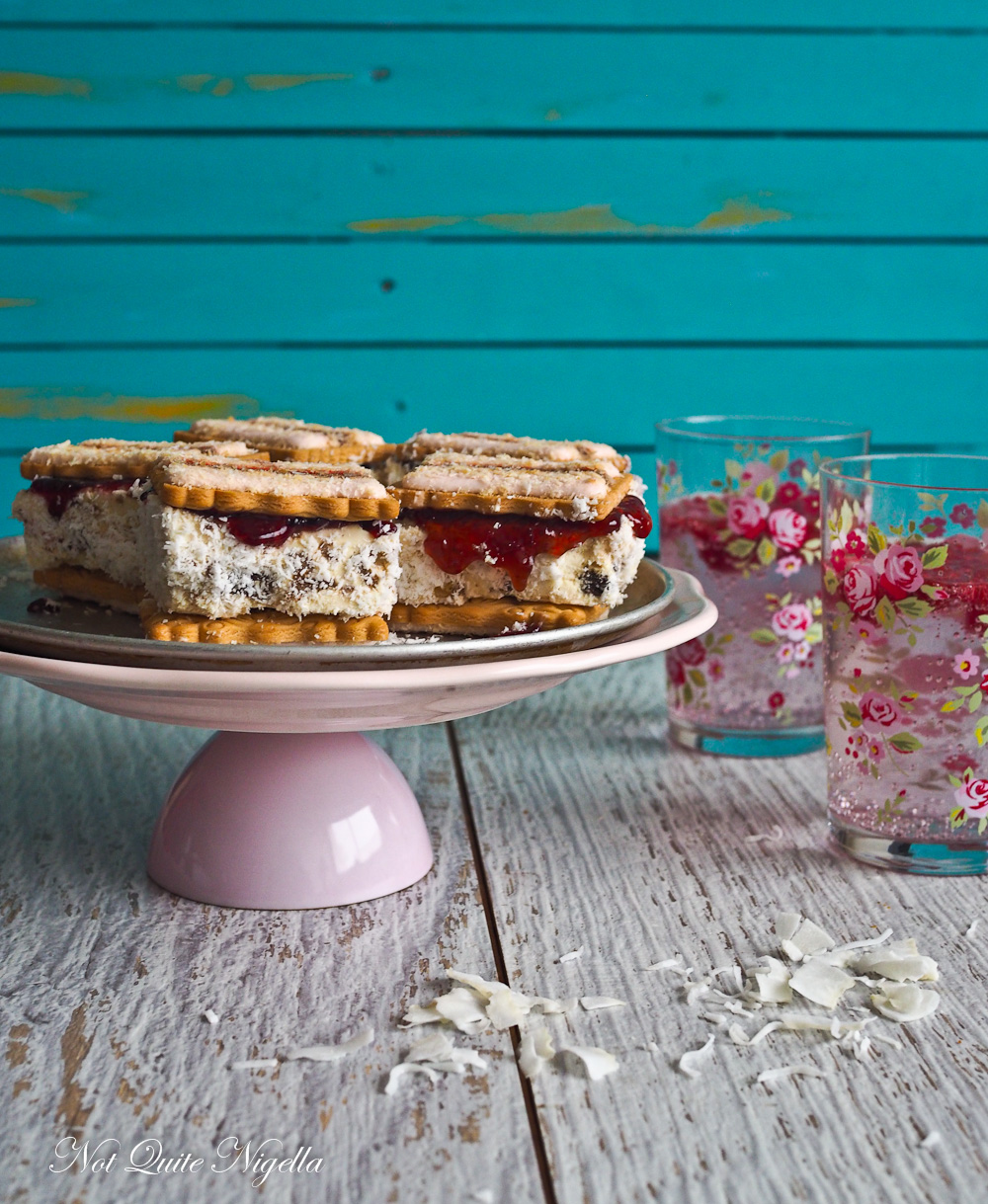 Step 1 - Slightly thaw the Woolworths Gold Vanilla and Hazelnut Ice Cream and press into a rectangular takeaway container. Freeze again and then place the biscuits on top and cut out around them. Roll the ice cream in the coconut and spread some jam on top and then top with another biscuit. 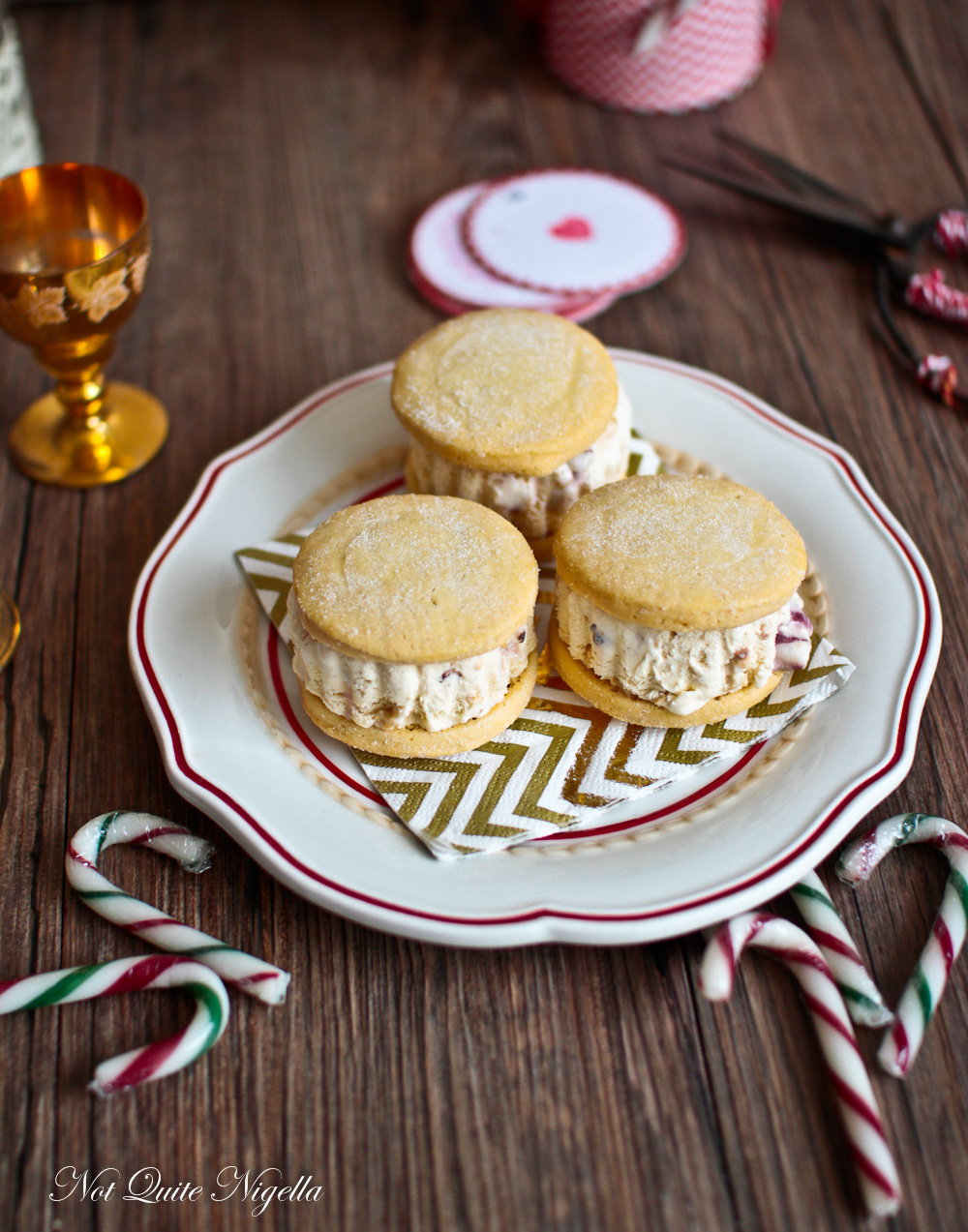 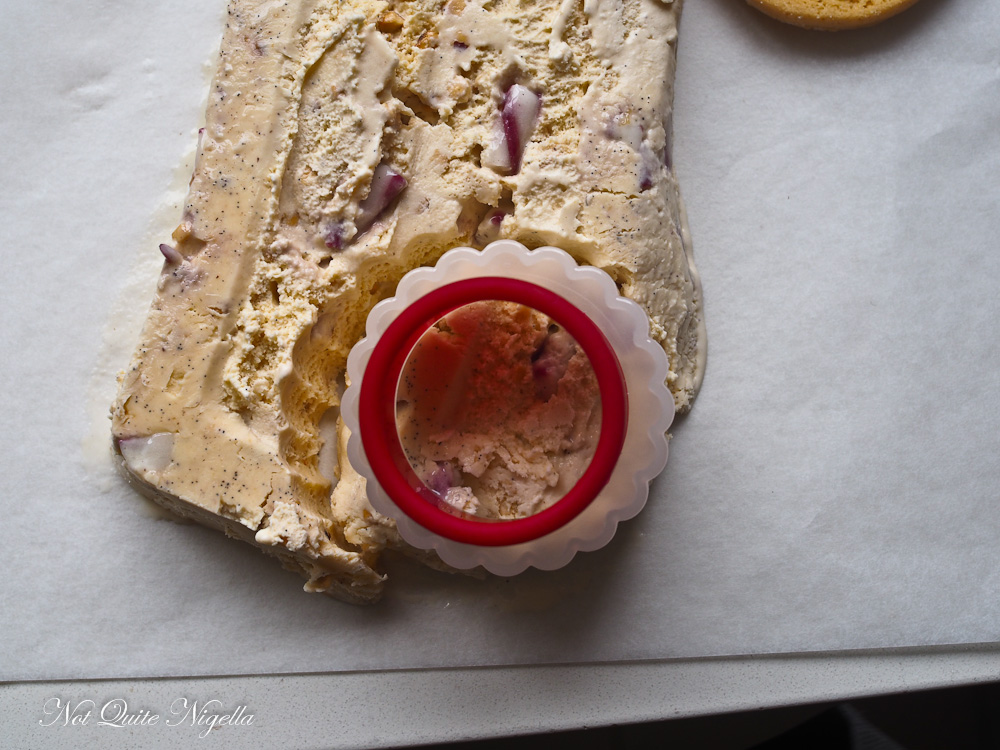 Step 1 - Slightly thaw the Woolworths Gold Vanilla and Hazelnut Ice Cream. Meanwhile, place the candy canes in a plastic bag and bash with a rolling pin until they shatter into smithereens. Mix the candy cane shards with the ice cream and press the ice cream into a round or rectangular container. 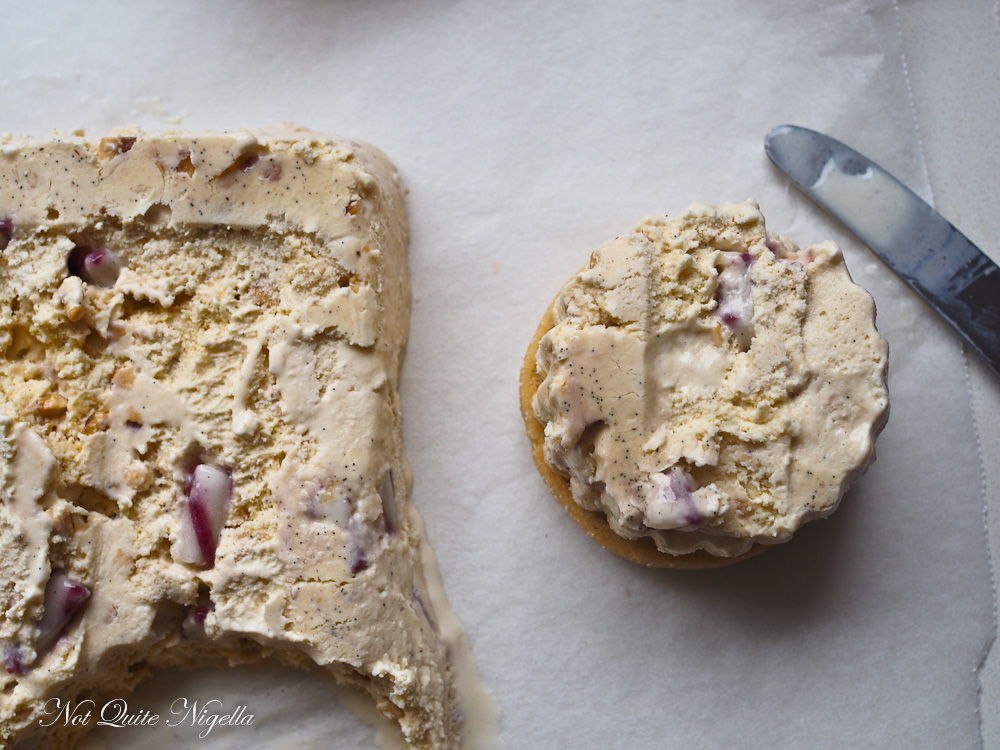 Step 2 - Take some fluted cutters around the same size as the biscuits and cut out the ice cream centres. Sandwich these between two shortbreads. 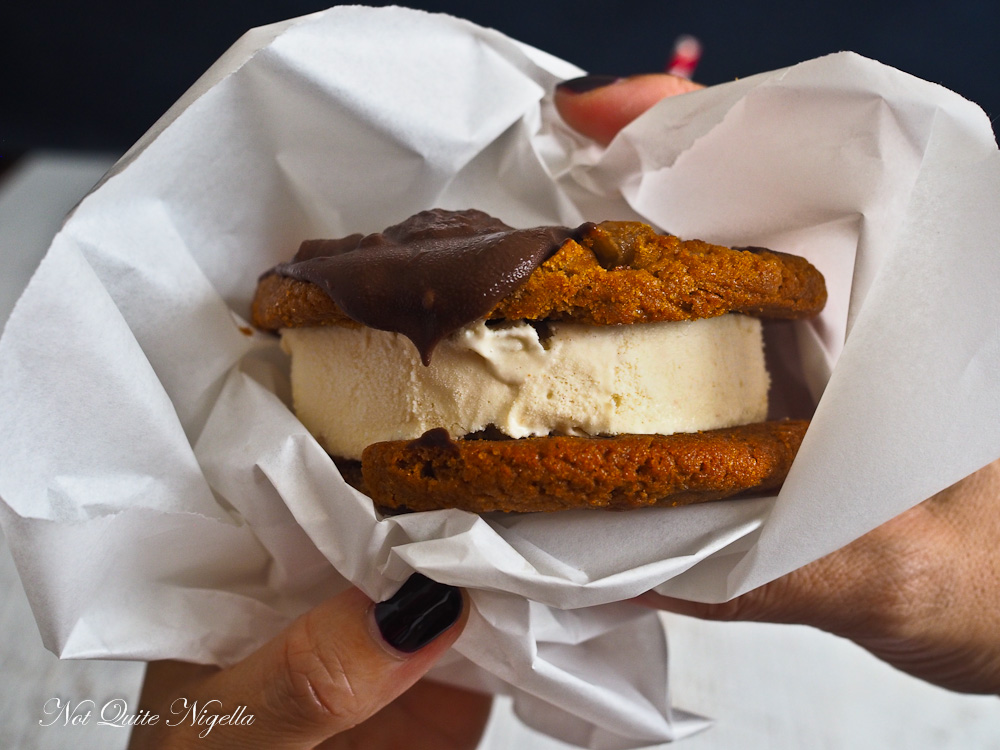 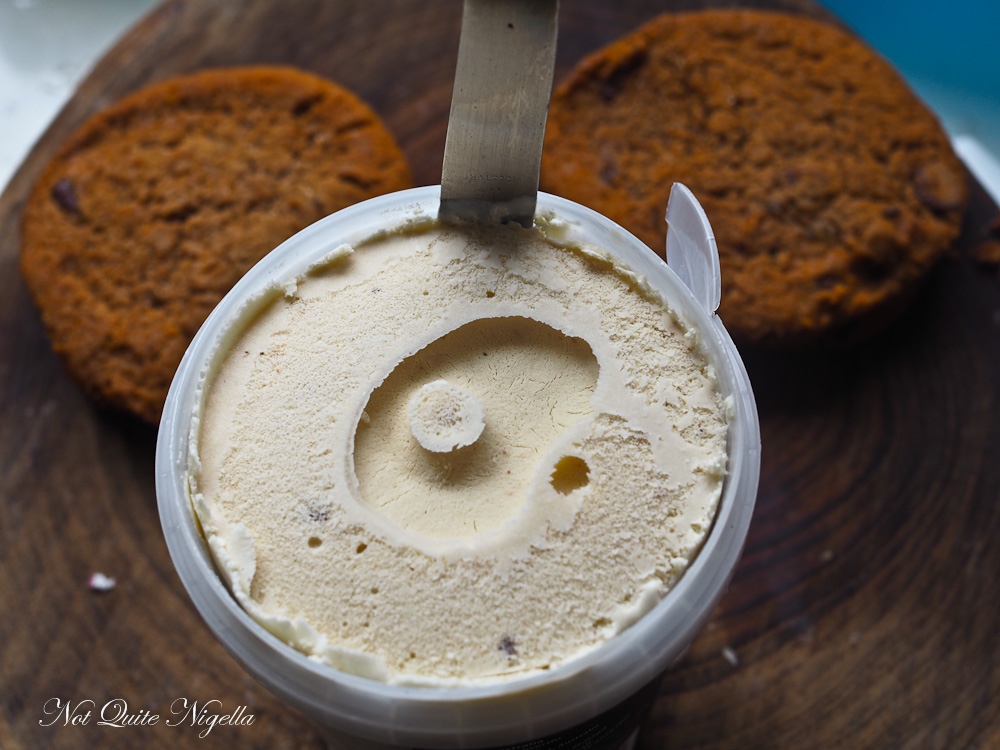 Step 1 - With a butter knife, slide the ice cream out of the container. Using a sharp knife, cut the ice cream into five even slices. Sandwich between two Woolworths Gold Stem Ginger and Belgian Chocolate Chip Cookies. Drizzle chocolate on top of half of the cookie. 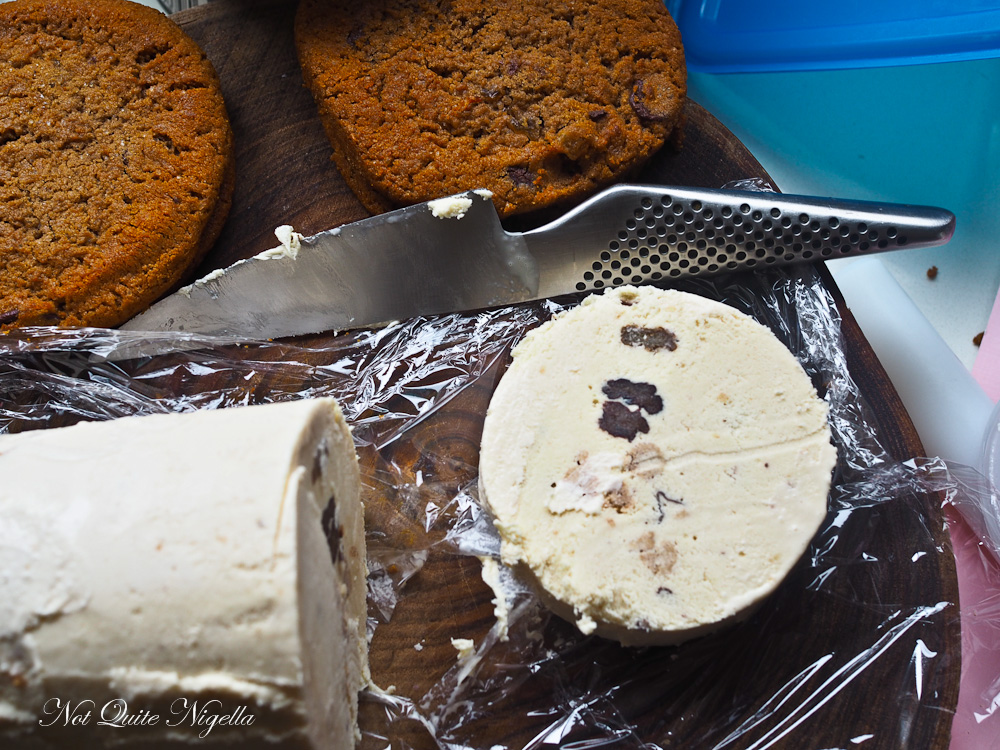 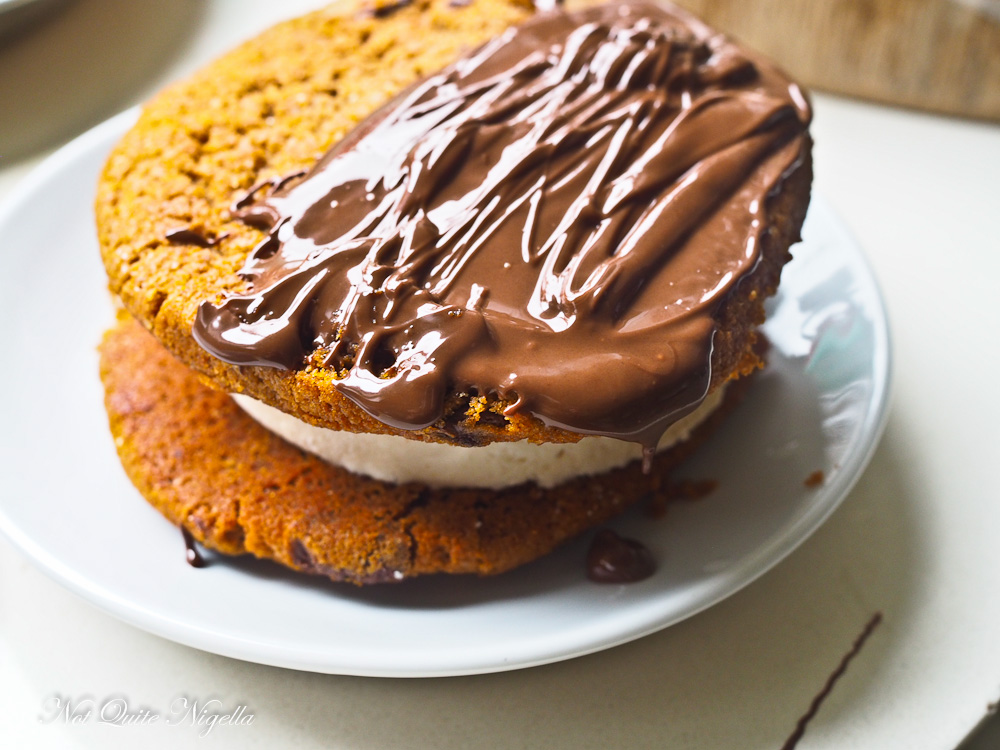 Makes 5 ice cream sandwiches (but they are big!) 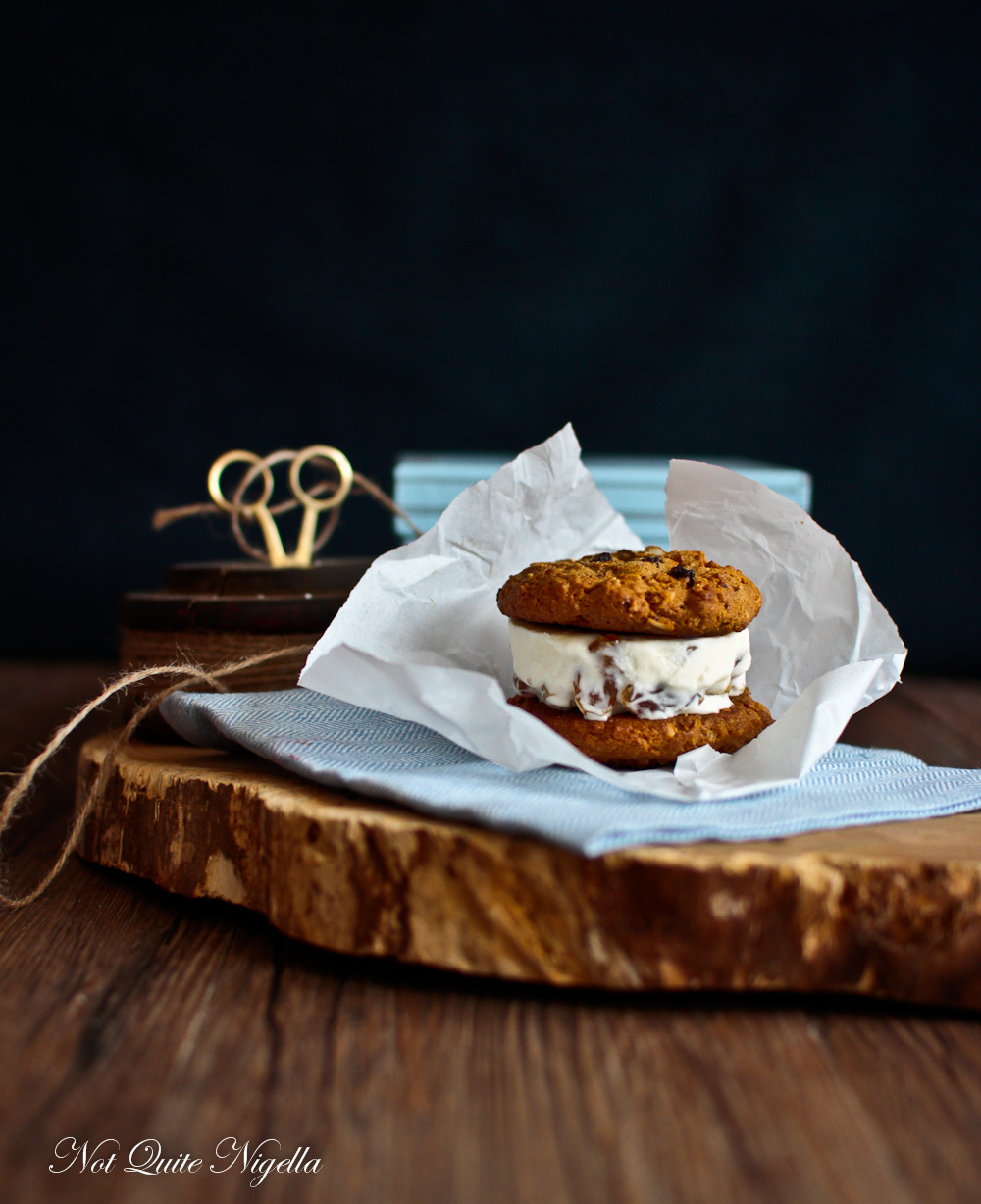 Step 1 - Steep the raisins in the rum overnight or for as long as you have. Whisk the icing sugar, cream and coconut cream and add the raisins and rum. I placed these in an empty Woolworths Gold Ice Cream container as it fits the cookies well and you can just slice off pieces. You can also use any cylindrical container around the same size as the cookies or simply scoop out a round using an ice cream scoop and squash it down between the cookies. Freeze halfway and then stir to distribute the raisins throughout the mixture or they will all settle to the bottom.

Step 2 - Using a butter knife slide out the ice cream from the container. Slice into 5 portions and wedge between the cookies.