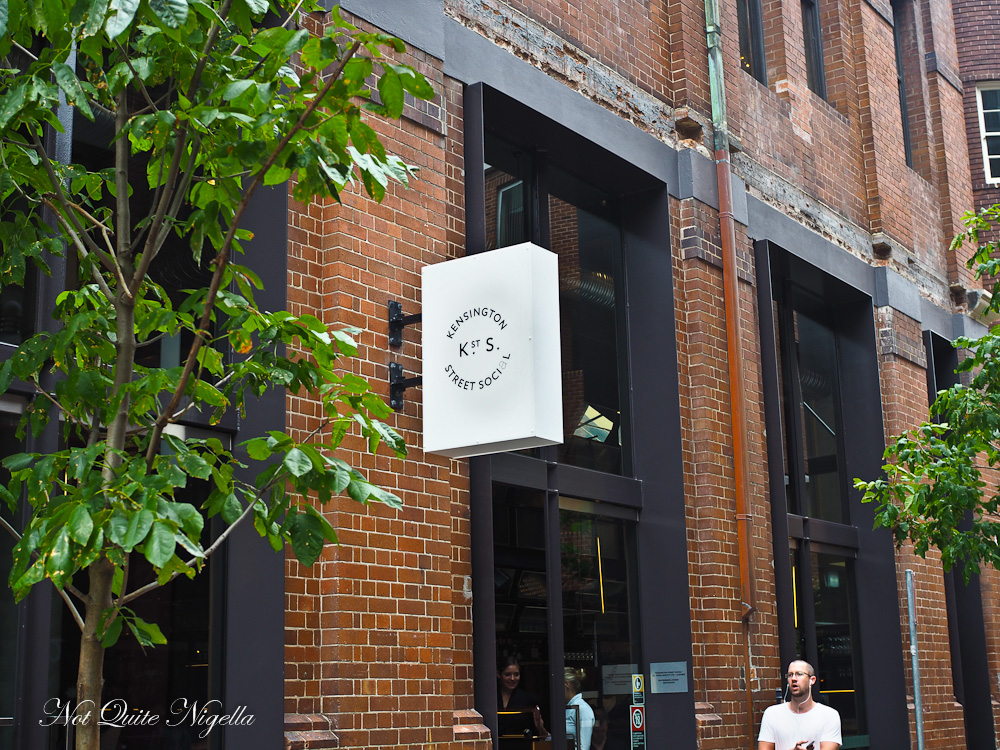 Ahh the Sunday lunch. What a better way to celebrate the second weekend day before going back to work than by sitting down with friends and eating and drinking all the food. And at Chippendale's newest restaurant Kensington Street Social, British chef Jason Atherton's first Sydney restaurant, they deliver great brunch and whimsical touches. 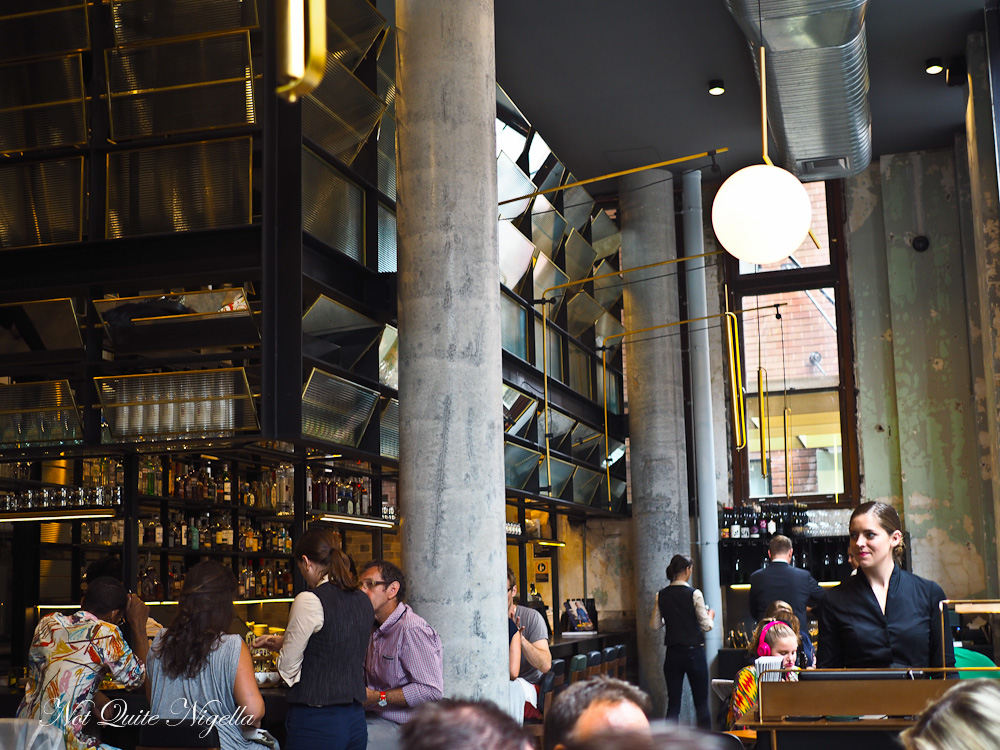 I've visited Aberdeen Street Social in Hong Kong but this is different sort of space. Located within the Old Clare Hotel we see staff whizz by with cloche laden trays, presumably for room service guests upstairs. There is an open kitchen, stripped back walls and plenty of bar seating. While Jason Atherton isn't there, the head chef Tony Gibson and executive chef Robert Daniels are. 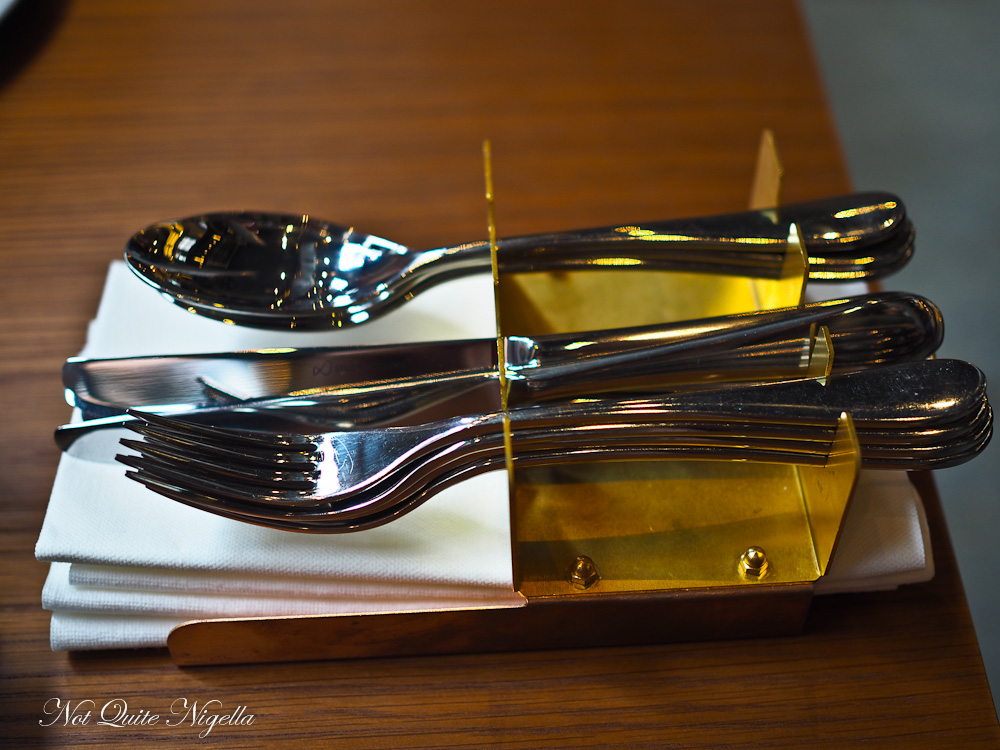 The decor is inspired by its former life as the Carlton United Brewery building. Service is friendly and polite. There are five of us at lunch today and we do the usual: each of us shouts out (well not literally shouting) something that we like while Mr NQN studiously avoids choosing items and talks nerdy things with Viggo like what sort of wine bottles they use for the water glasses (Bordelaise). The menu is made up of modern British and Mediterranean dishes while the cocktail list is full of punny temptations. 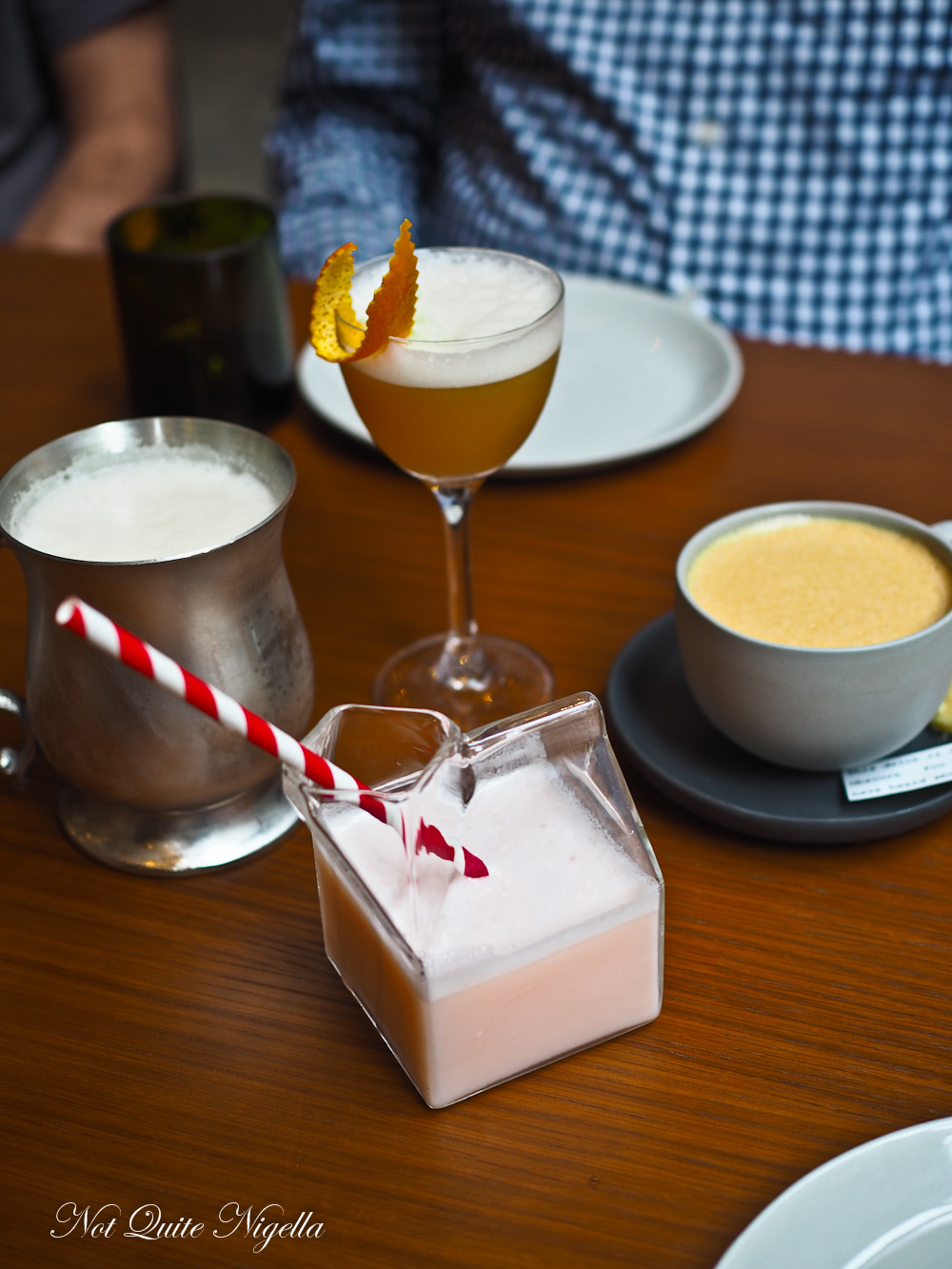 Speaking of punny...there's my cocktail at the front. The Cereal Killer. Get it? ;) The waitress does let me know that it's a sweet cocktail and that's fine with me. In it there's Ketel one vodka, Froot Loop steeped milk, apricot brandy and Aperol. It's sweet but not sickly so and isn't so much like Froot Loops, it's more fruity. And yes, how cute are those glass carton cups? There was a little conversation on Instagram and the peeps from Cured confirmed that you can buy them at Freedom. And you bet I'll be heading there soon for some... 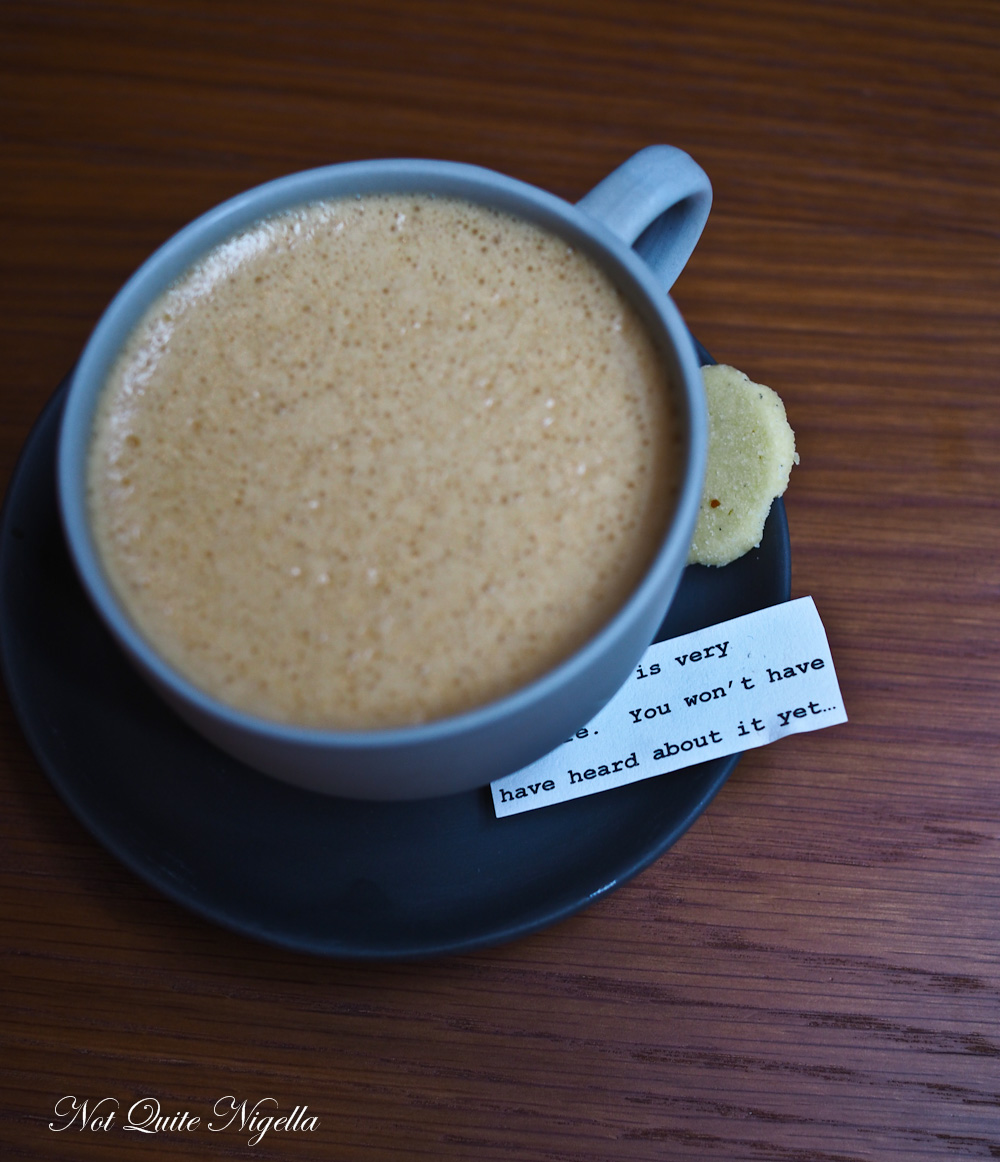 Louise's cocktail choice is a "Hipster Breakfast" that comes with a little slip of paper that says, "This drink is very obscure. You won't have heard of it yet..." which must be music to a hipster's ears. I'm just glad that there aren't beard shavings in it. This is made with a banana bread infused Pampero rum, cold drip coffee, salted butter foam and Fernet Branca. The banana bread is a bit lost against the stronger aromas and flavours of the coffee and Fernet Branca but it's a fun drink and a pick me up. On the side is a little shortbread round. And yep she cut this into five pieces so we could all try it. I think we are the most democratic eaters and sharers ever. 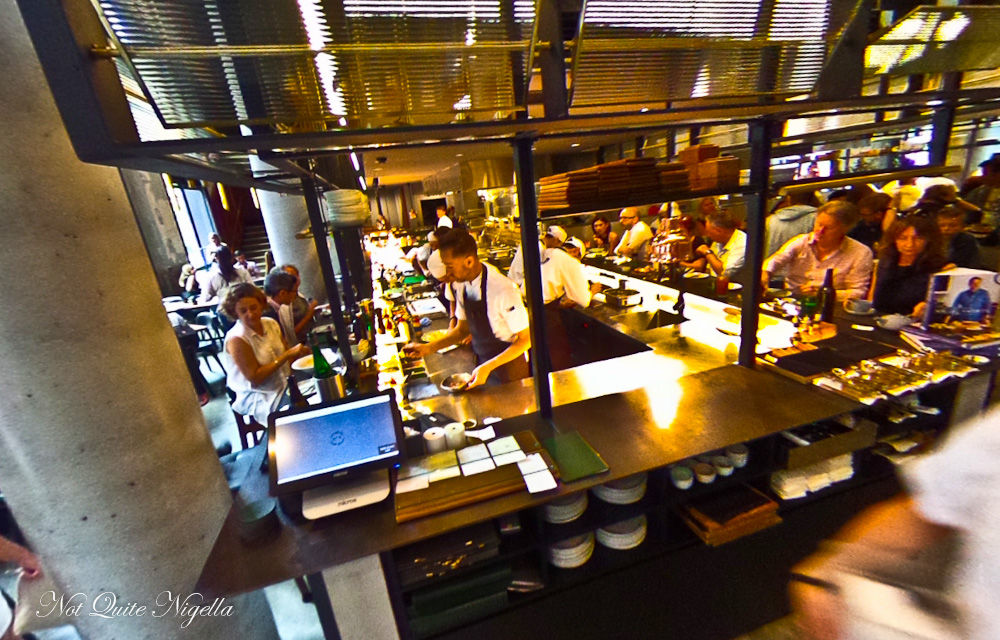 Belinda's drink is called Rye Society which is butter washed Bullet rye whisky, marmalade, Earl Grey, lemon, egg white and "Chanel No. Rye", a bergamot infused perfume that is sprayed at the table. At first she is a bit alarmed when she thinks that they have sprayed Chanel No. 5 on her cocktail. "Did I tell you that I cut my butt cheek this morning accidentally using the razor?" Belinda says while holding up her cocktail. "That's why I'm sitting funny," she explains. 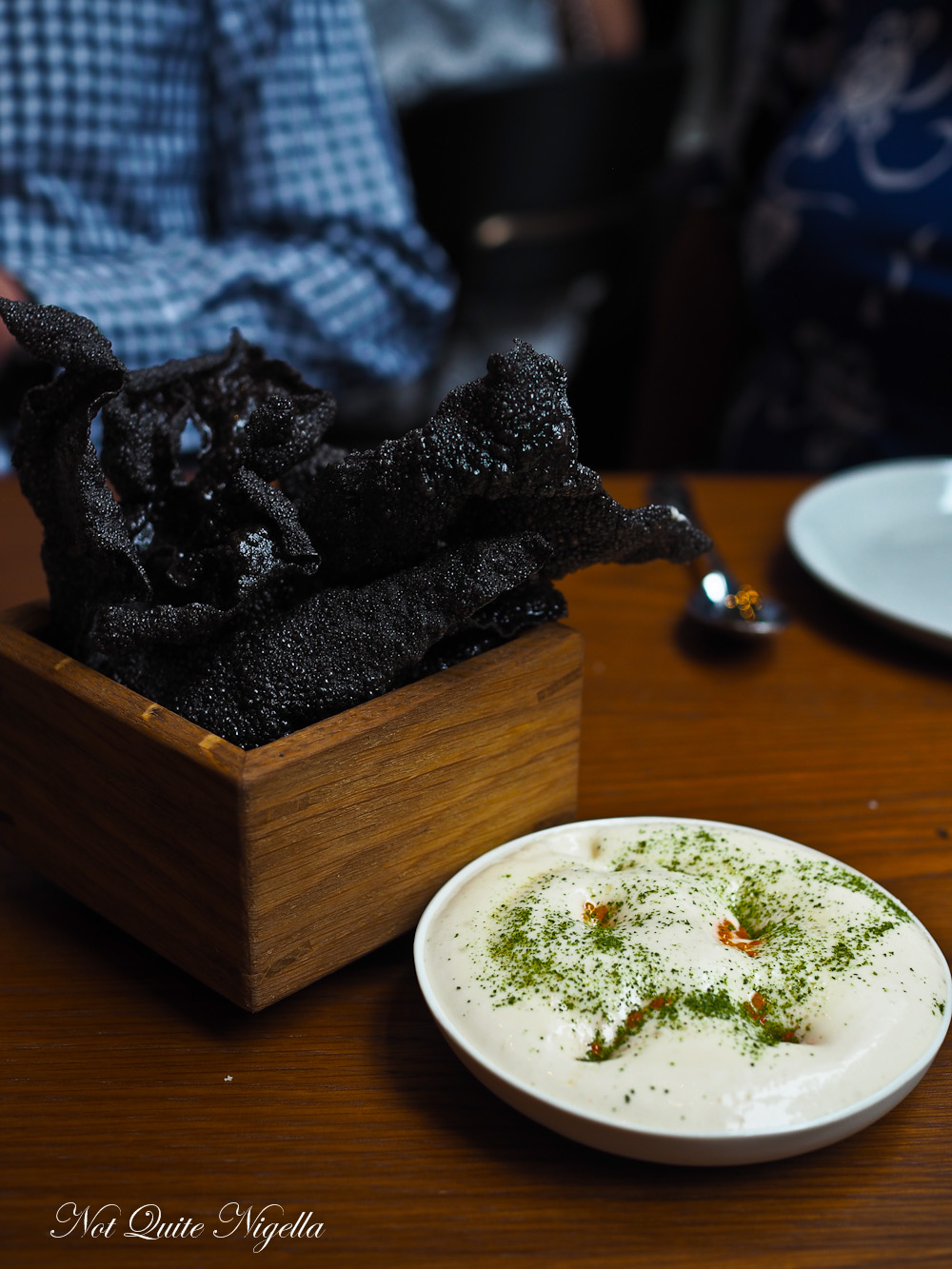 The food starts arriving and these were my choice because squid ink speaks to my inner (or outer) Morticia. The squid ink crackers are like deep fried rice crackers coloured with squid ink. They come with a cucumber foam with trout roe that you scoop up with the rapidly disintegrating crackers. Still they're delicious and I could eat the whole box. 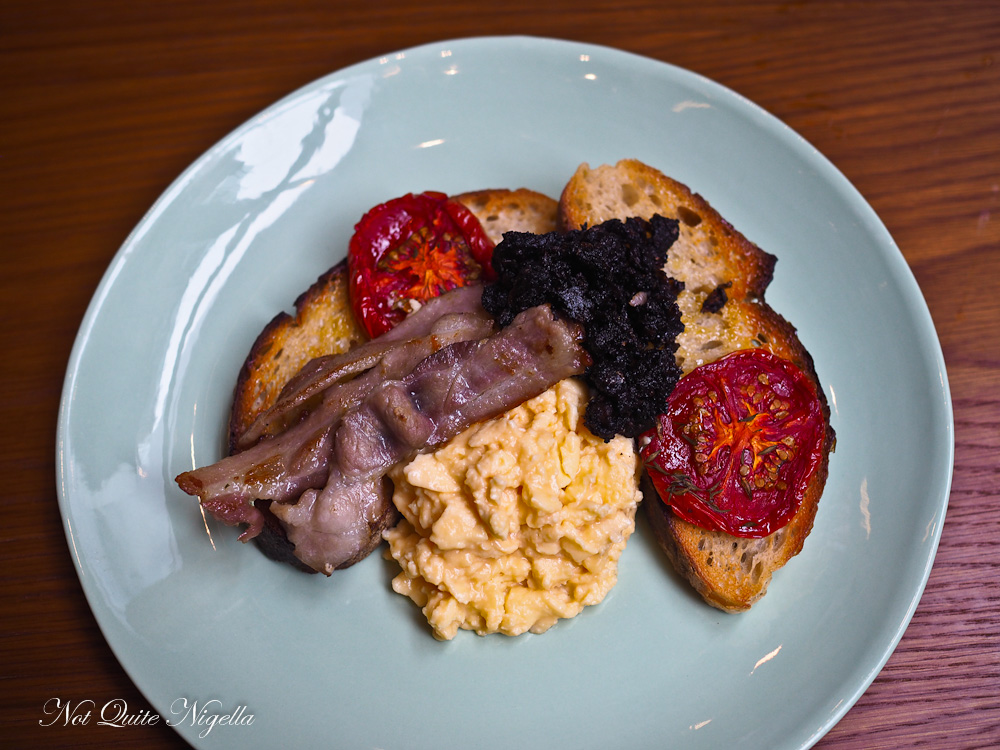 We did tend to order the less typical brunch menu items but there are regular sorts of things like scrambled eggs. Here they are paired with house cured bacon, black pudding and half a confit tomato and it's done very well. So if you have one of those friends who can't eat anything but regular breakfast food and who doesn't want squid ink crackers, they'll be taken care of. By coincidence or fate, the scrambled eggs just happen to be in the shape of Australia (minus Tasmania). I had to ask if it was deliberate and the waitress said no (and to her credit didn't give me a dodgy side eye look). 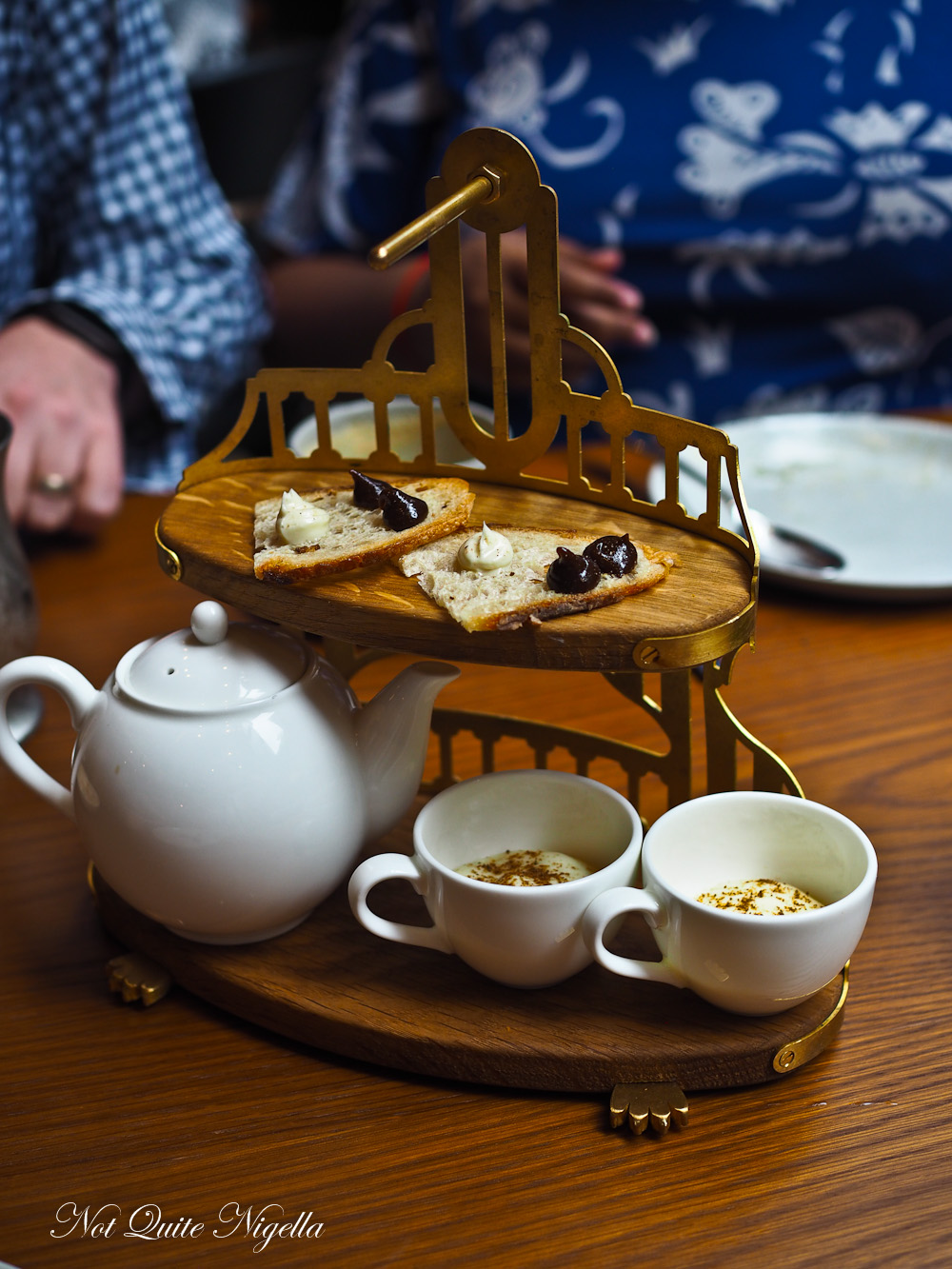 Most of the items are meant to be shared but when they mean shared they really mean shared between two because portions are on the small side or as Belinda quips, "This is a supermodel restaurant." This is a fun item brought out on a two tier stand. 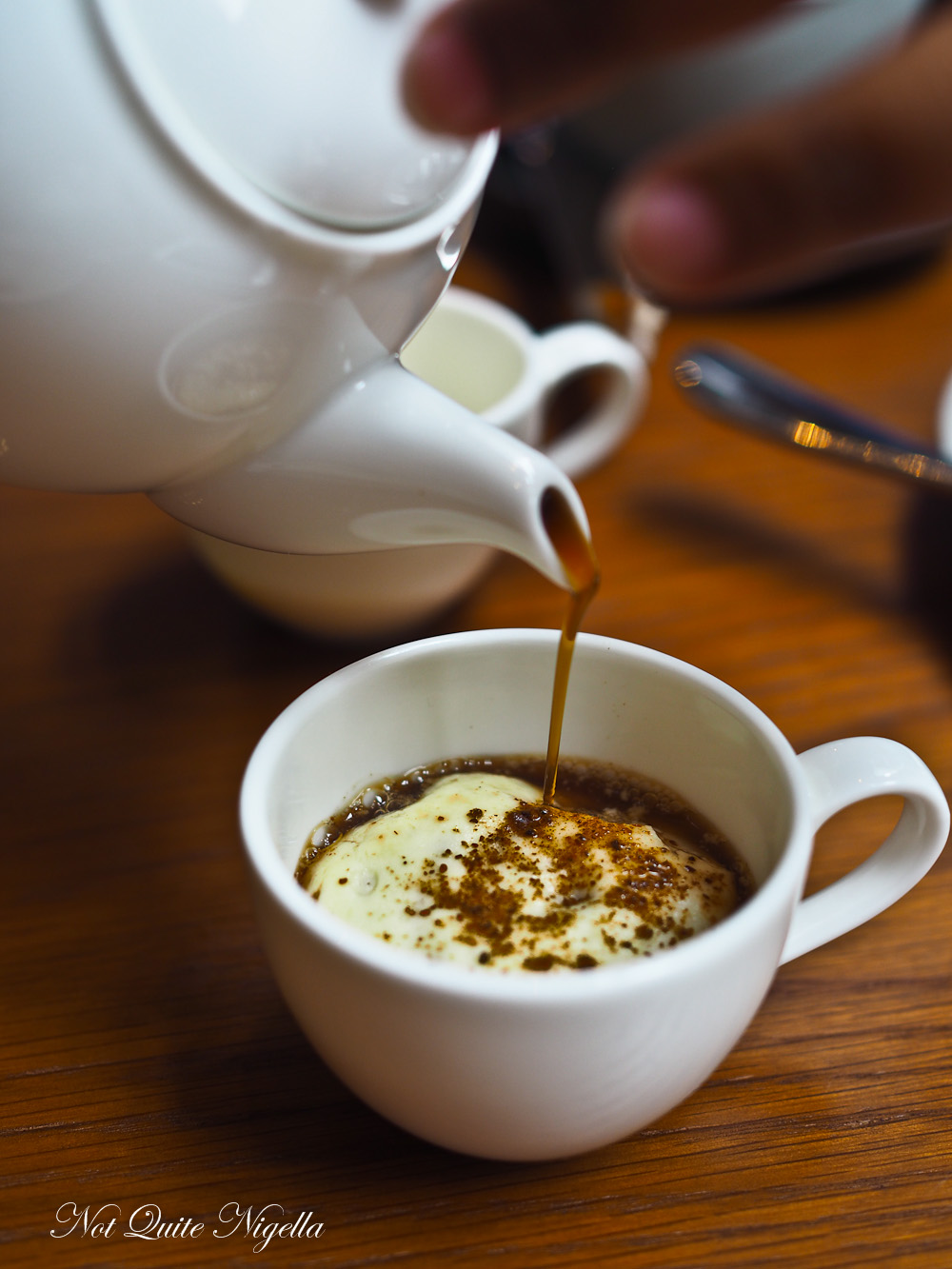 On top are two toasts with gentlemen's relish (a salty, anchovy relish) and bone marrow butter dabs. On the bottom is a pot of wild mushroom tea that you pour into the tea cups and drink after dunking your toast in. It's really quite fun and dainty but I will state the obvious and don't order this if you're hangry or have a gargantuan appetite. 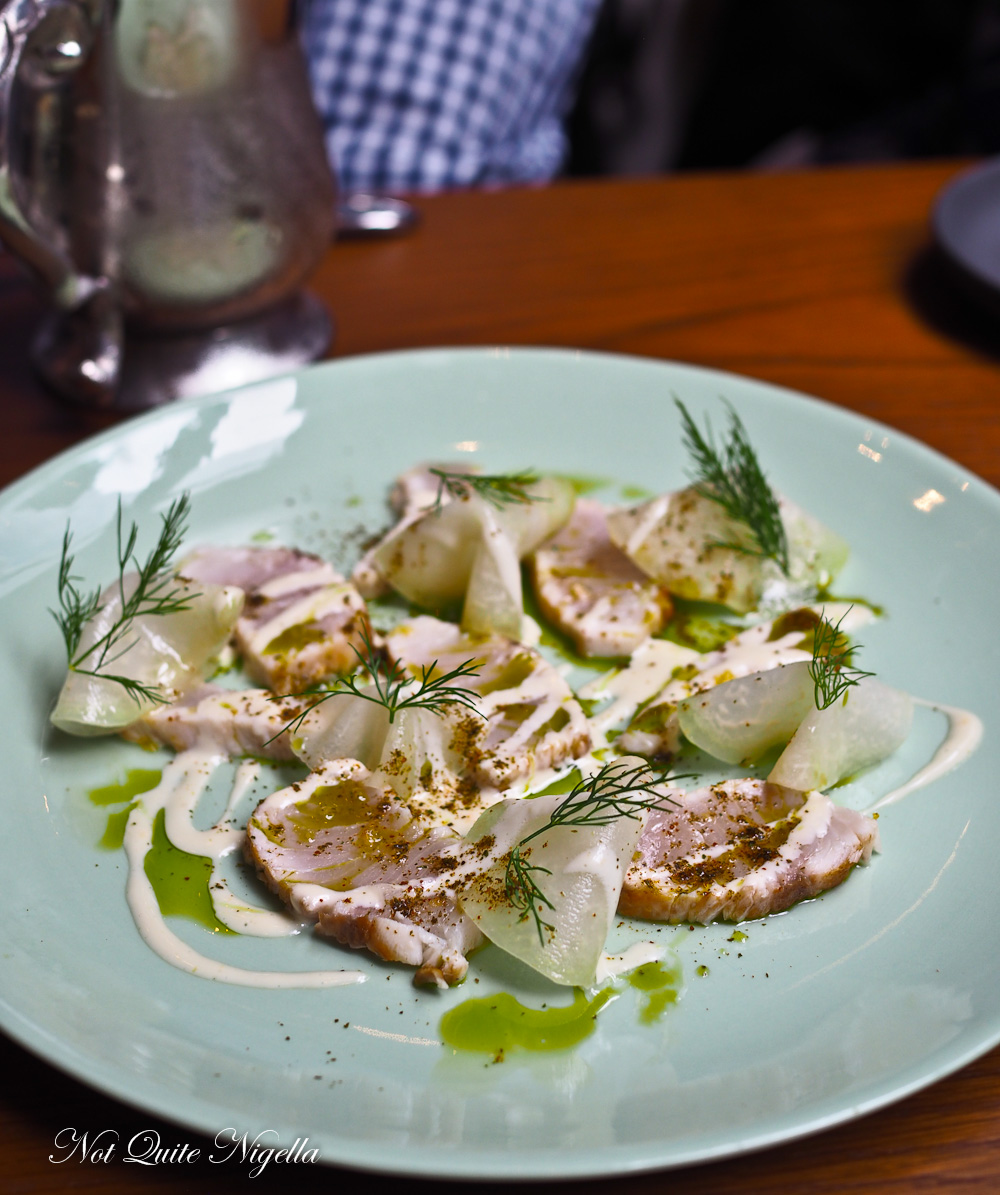 We all like the freshness of this seared kingfish tataki with paper thin slices of kohlrabi, sprigs of dill and a sprinkling of tōgarashi or Japanese chilli pepper. 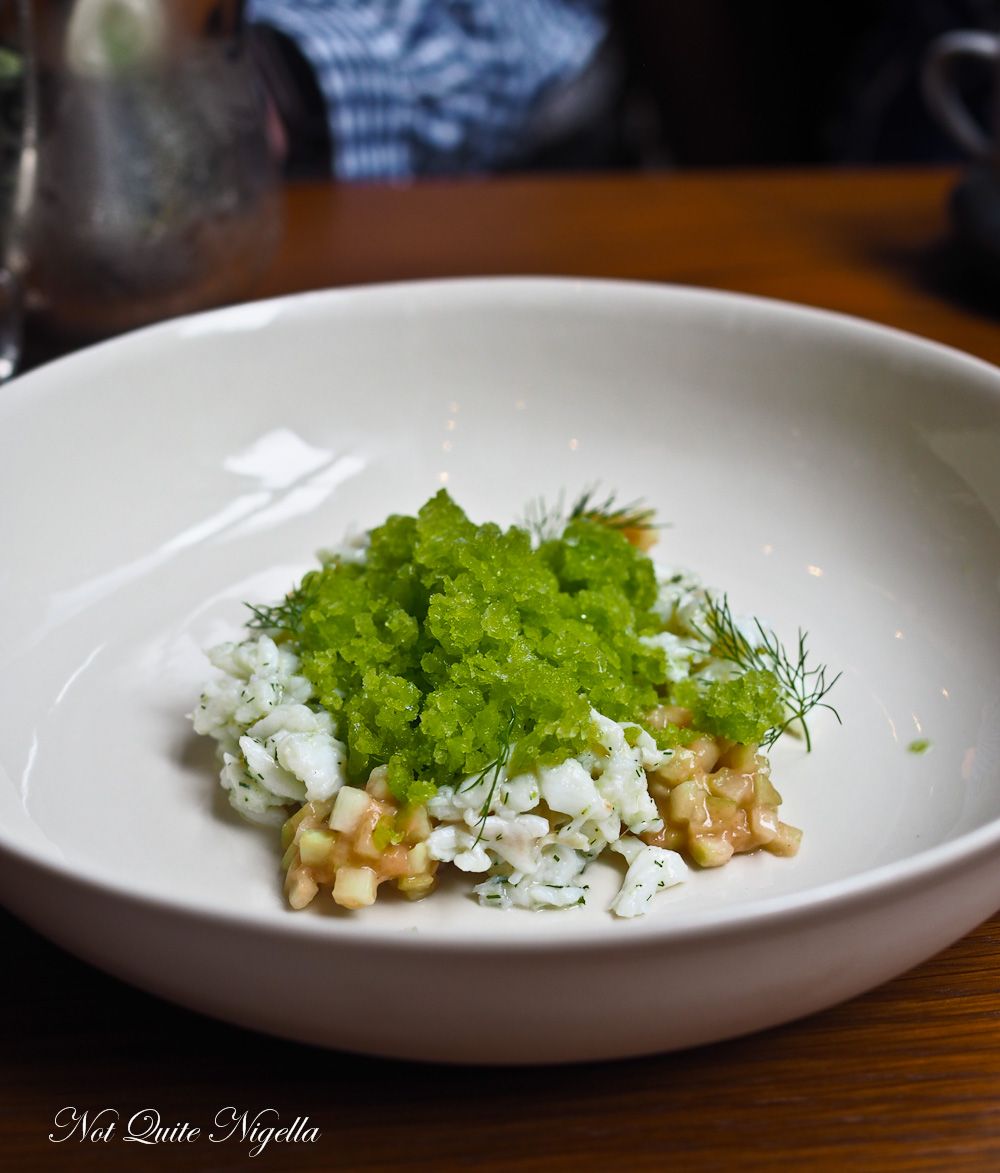 The spanner crab and tangy diced rhubarb comes to the table in a ring and they spoon the frozen cucumber gazpacho into the centre. I have to admit that gazpacho isn't one of my favourite things so whilst the spanner crab part was good, the frozen centre didn't appeal that much to me but that's just me. 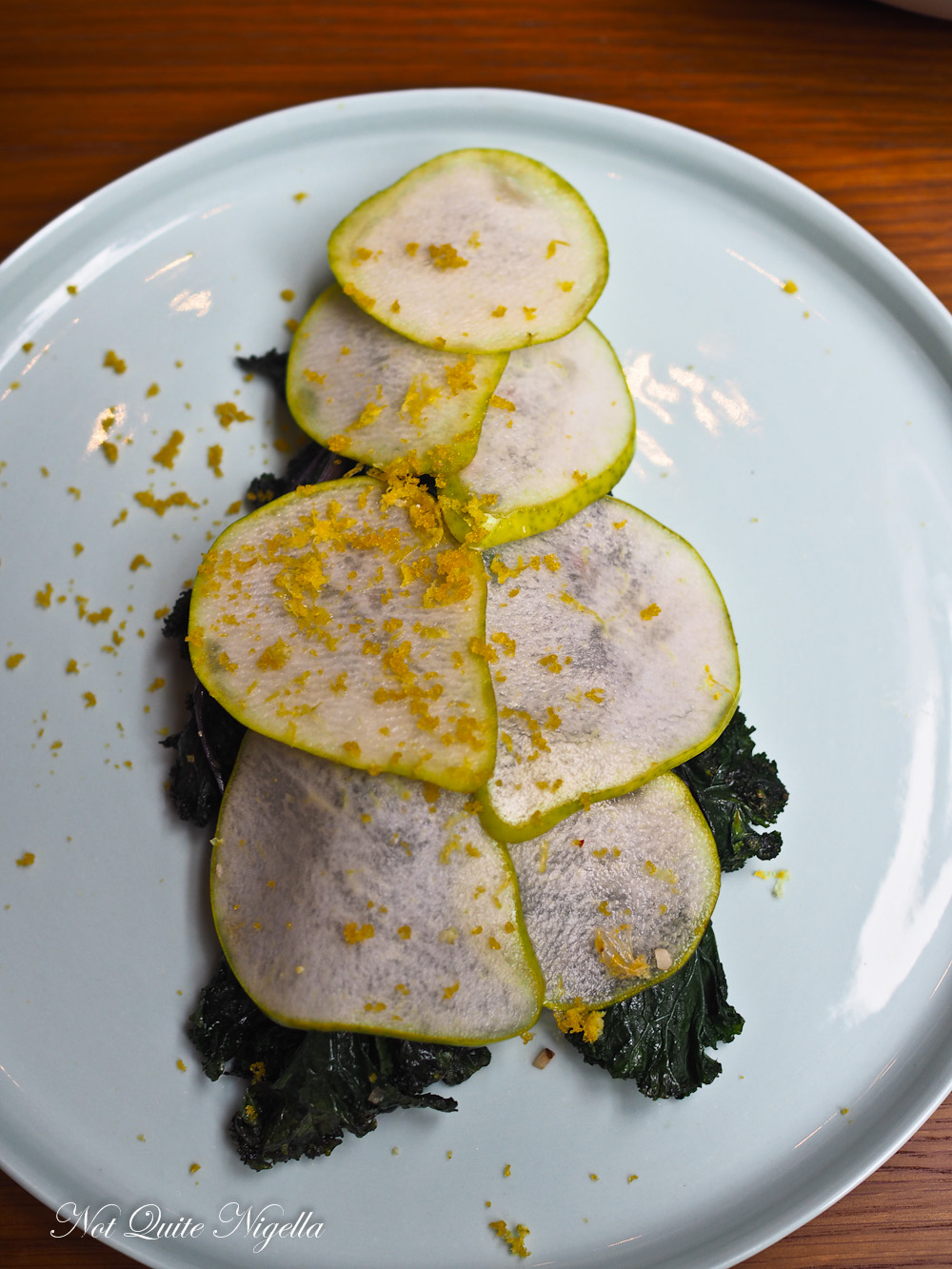 While I like the idea of the kale and chilli in concept the pear turns a little mushy when cutting it up with a knife and fork. It also need a bit more seasoning. 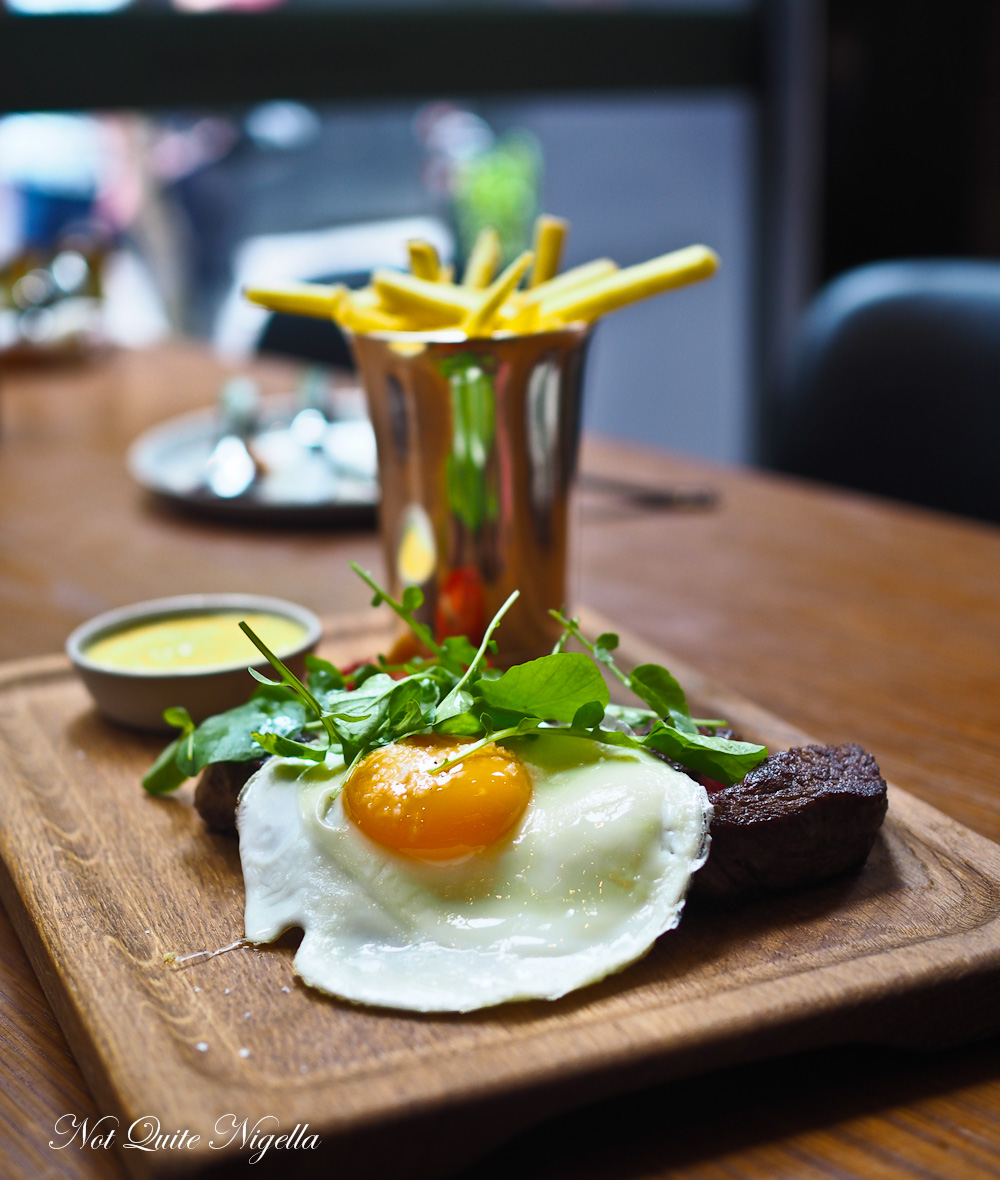 They didn't ask us how we like our steak cooked but they deliver to us one of the best steaks I have had in a while. Perfectly medium rare it comes with a sunny side egg, half a tomato, shoestring fries and a bearnaise sauce. The steak is succulent, full of flavour and melts in the mouth, the bearnaise is spot on and the fries made for dipping in the egg or the bearnaise. And suddenly I want all my steaks to come with a sunny side egg :) 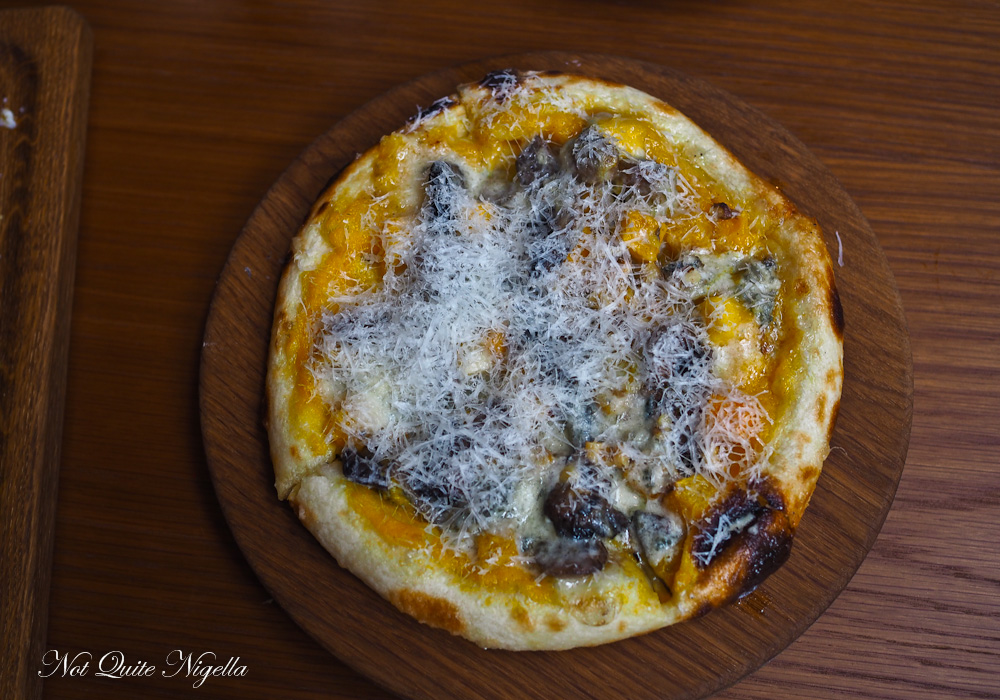 The flatbreads are the last to arrive -they come after we finish the steak which is unexpected as breads usually come at the beginning. They prompt the question, "What's the difference between flatbread and pizza?" The bread is crisp bottomed and puffy edged and soft on top and served in quarters. On top are chunks of Queensland blue pumpkin, oyster, portobello mushrooms with blue cheese and walnut. 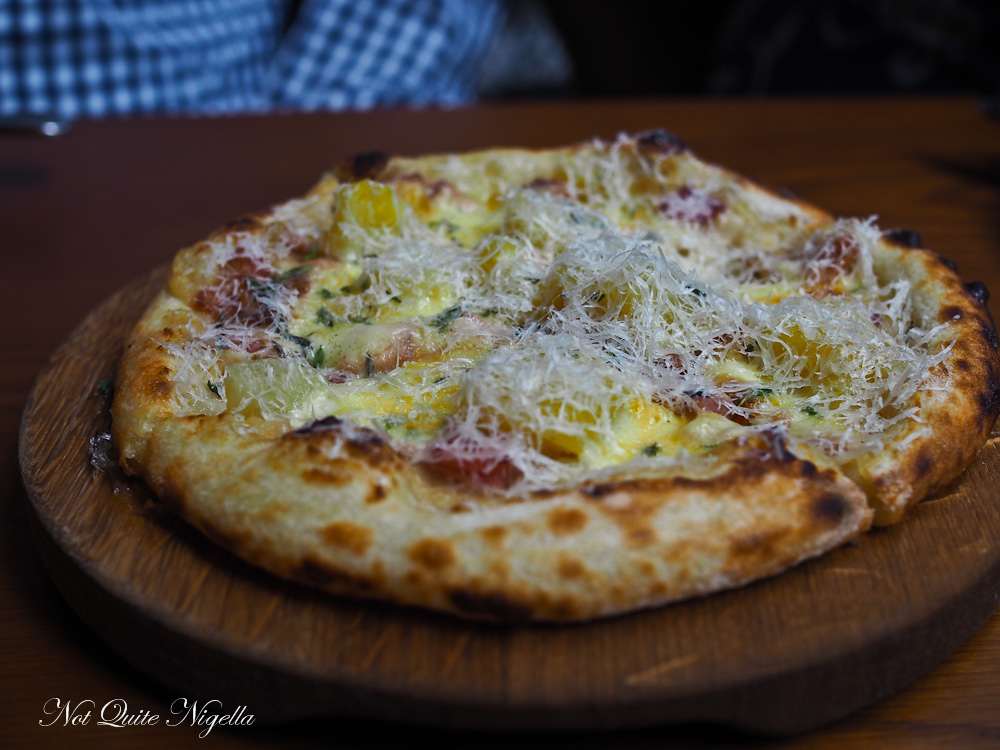 This flatbread is my choice as I love L'artisan Mountain Man washed rind cheese. I mean you can't really go wrong with bacon, onion, smoked potato and good cheese on a flatbread. I take small bites of this so that I can savour my quarter. 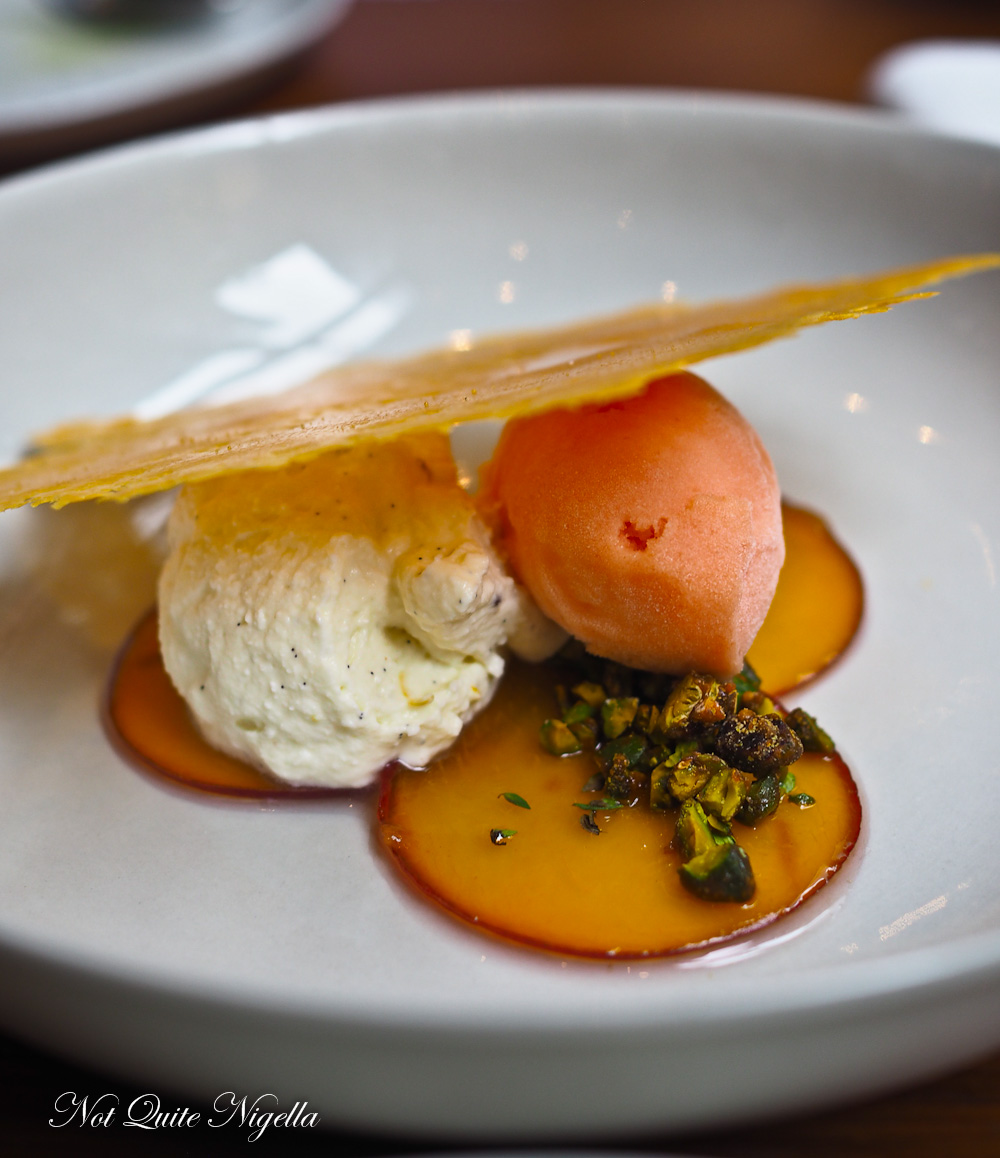 We have a little break before dessert and given that there are five desserts and there are five of us, we order one each. The buffalo ricotta with lemon thyme peaches and peach sorbet are nice enough but simple. "I like the honeycomb wafer the best," says Belinda. 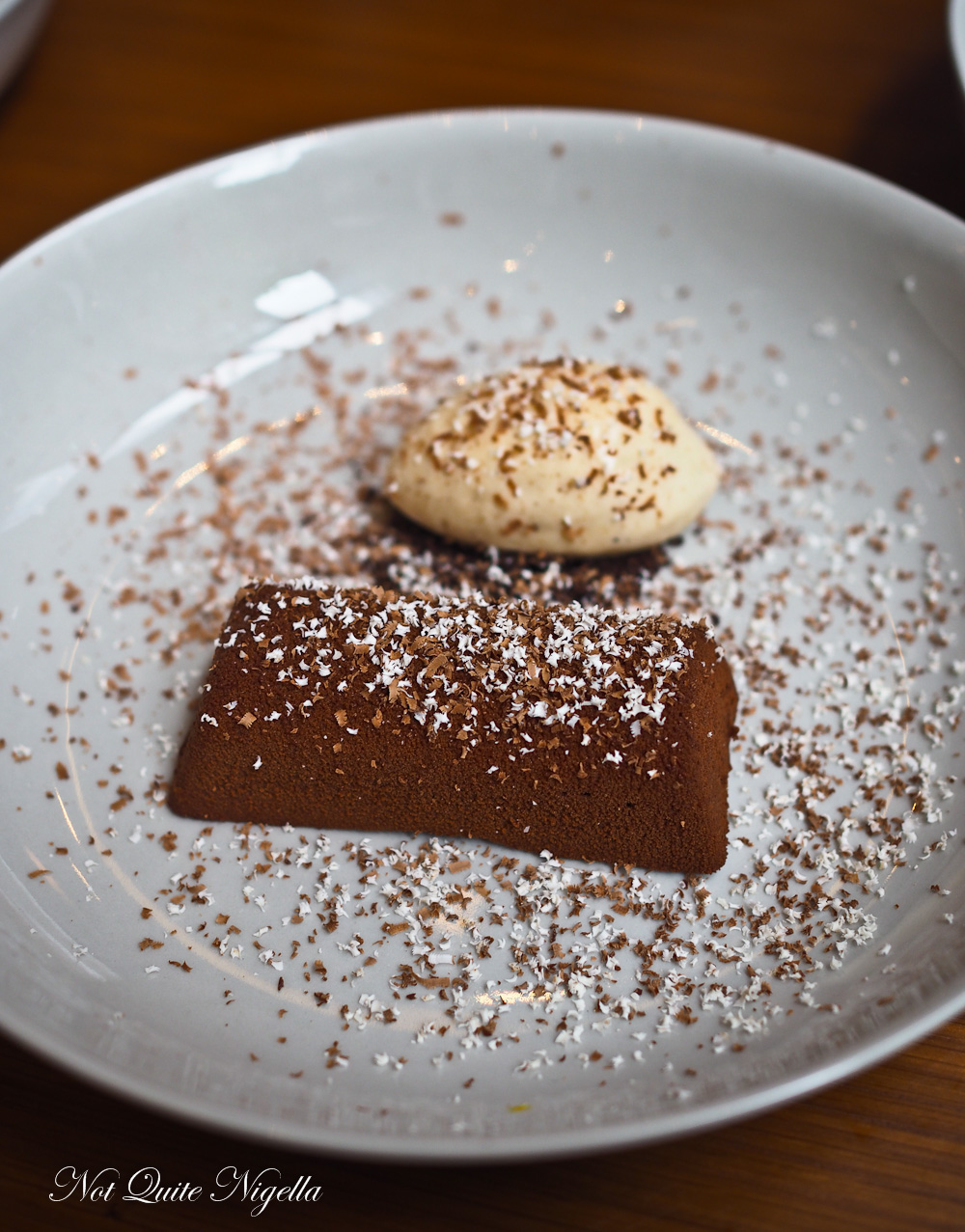 Viggo enjoys the chocolate and peanut bar with a centre of caramel and a scoop of caramelised banana ice cream. It is topped with shavings of white and dark chocolate. I would have loved a bit more peanut flavour to this. 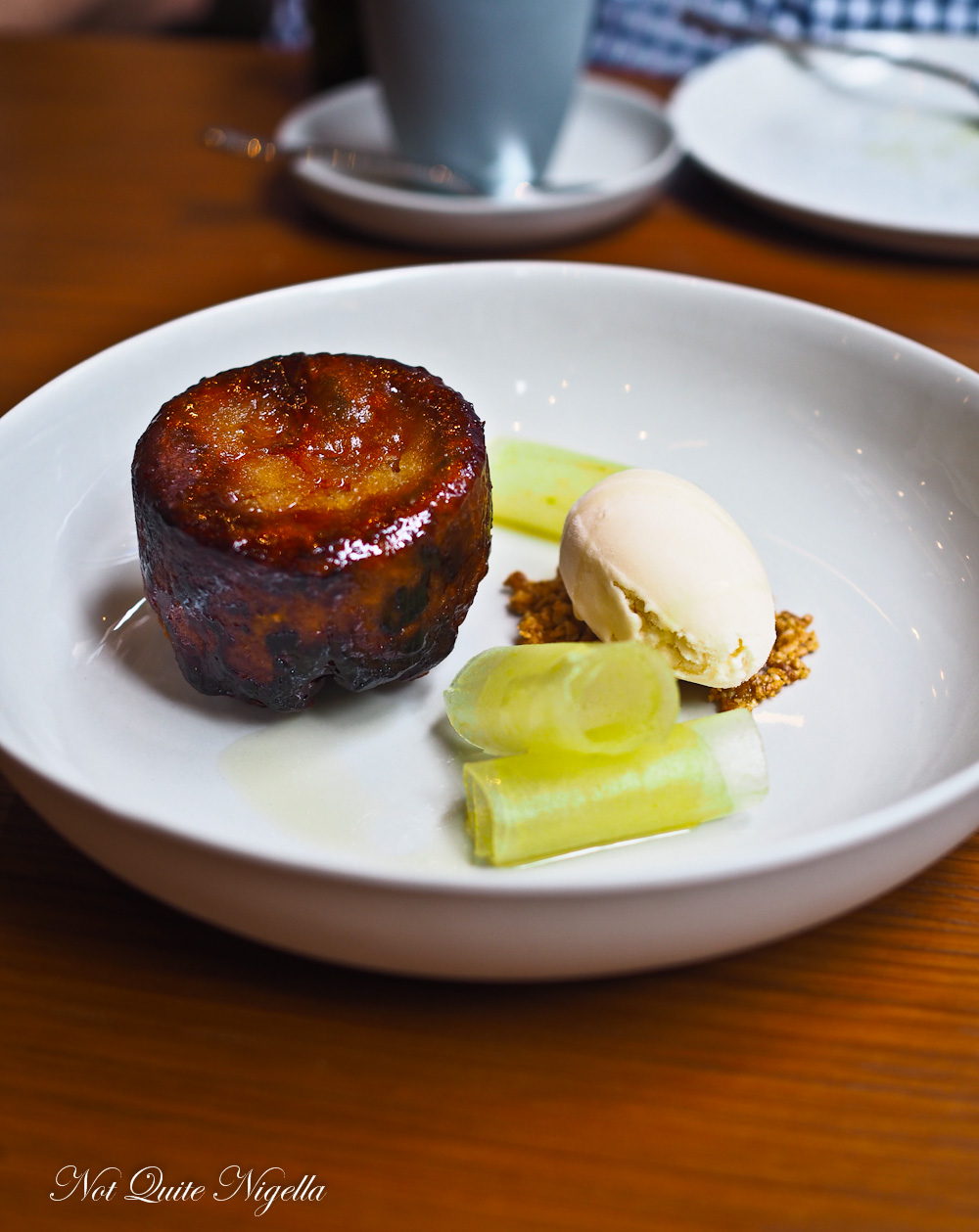 The apple pastry is served hot with a cider vinegar ice cream and pickled apple that lends the dessert a slightly savoury element. While the pastry is good it's also very rich. 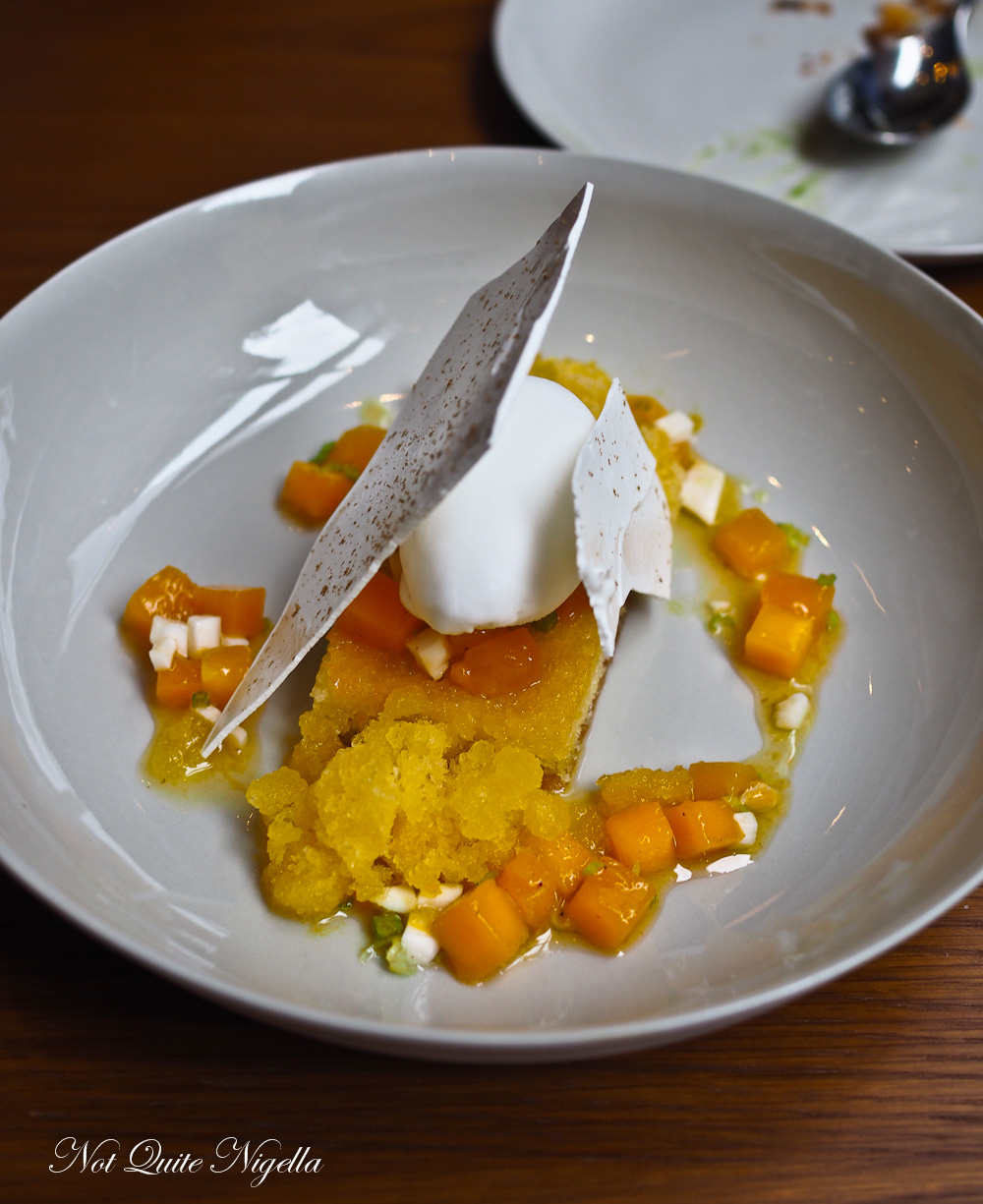 The olive oil cake certainly looks pretty. It is served with a scoop of coconut sorbet, diced spiced mango, and passionfruit ice granita. You don't really taste the olive oil of the cake and this feels as though perhaps there is an element missing. 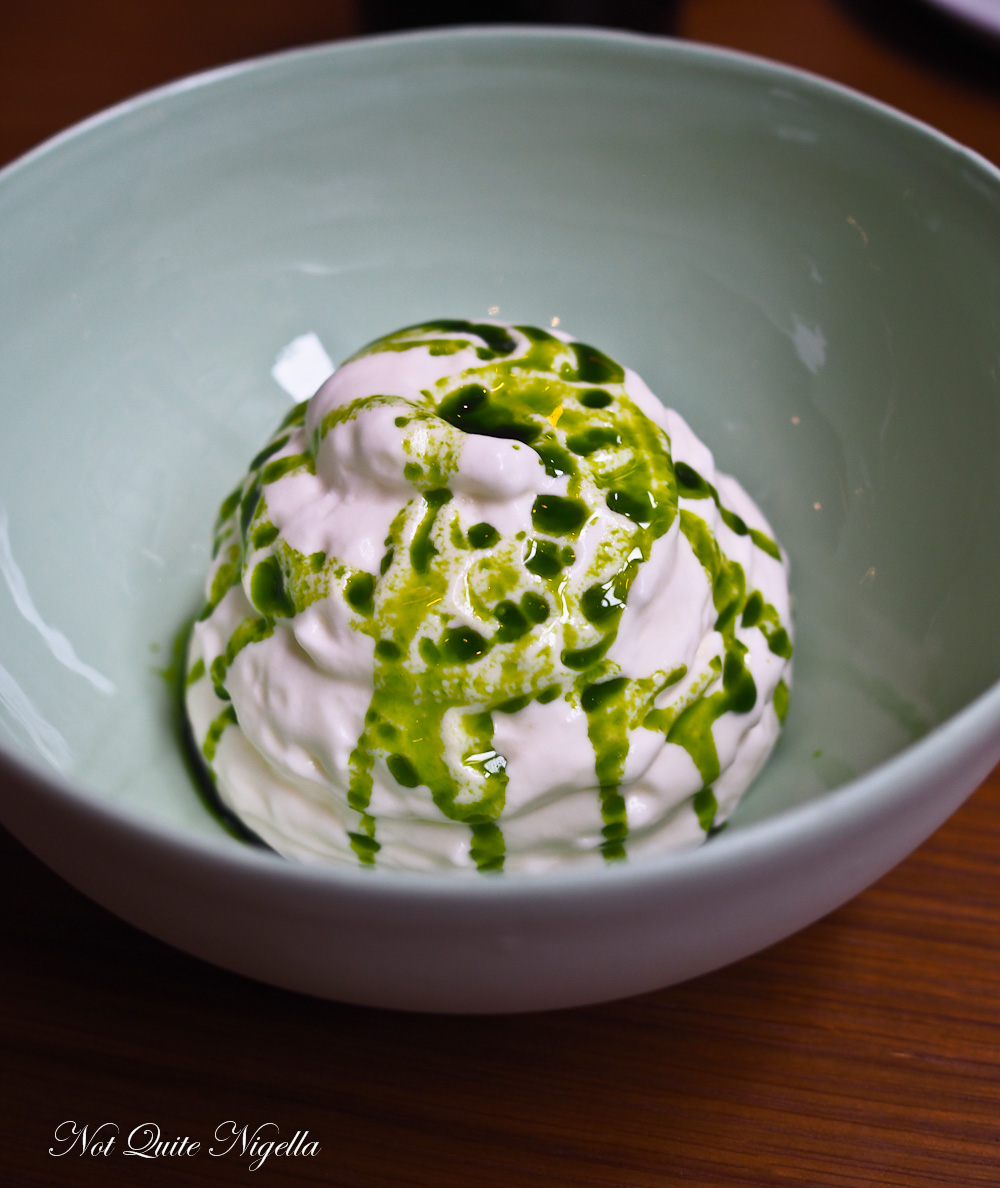 However everyone's favourite dessert is this one with a centre of basil ice cream, malt meringue, lemon curd and yogurt mousse on top. It's light, refreshing and textural and the malt meringue is such a delicious idea that I want to try at home!

So tell me Dear Reader, do you see a map of Australia in the eggs or were we all tipsy? How often do you try and replicate something that you ate out and enjoyed at home? And which dish or cocktail appealed to you the most? 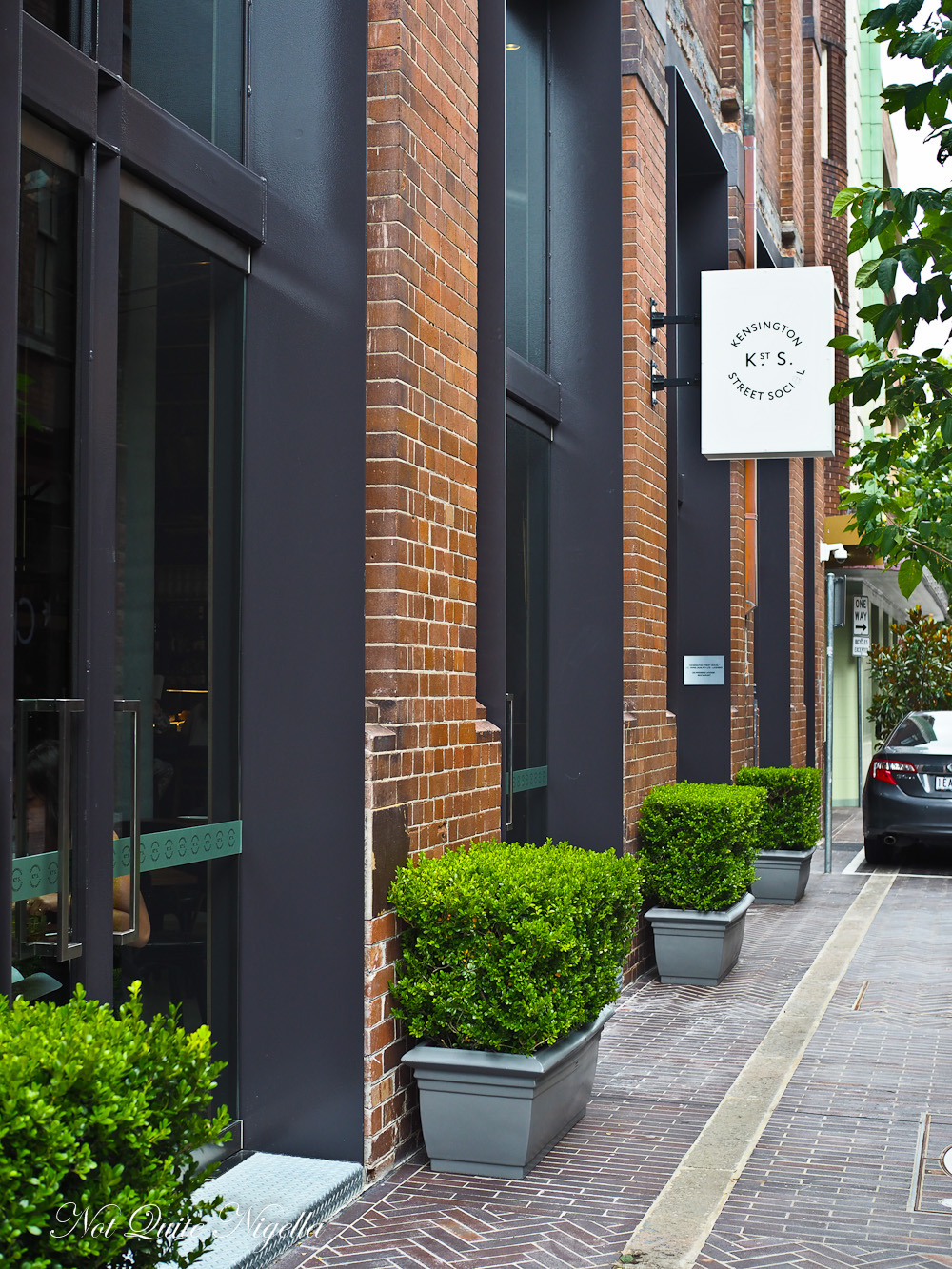