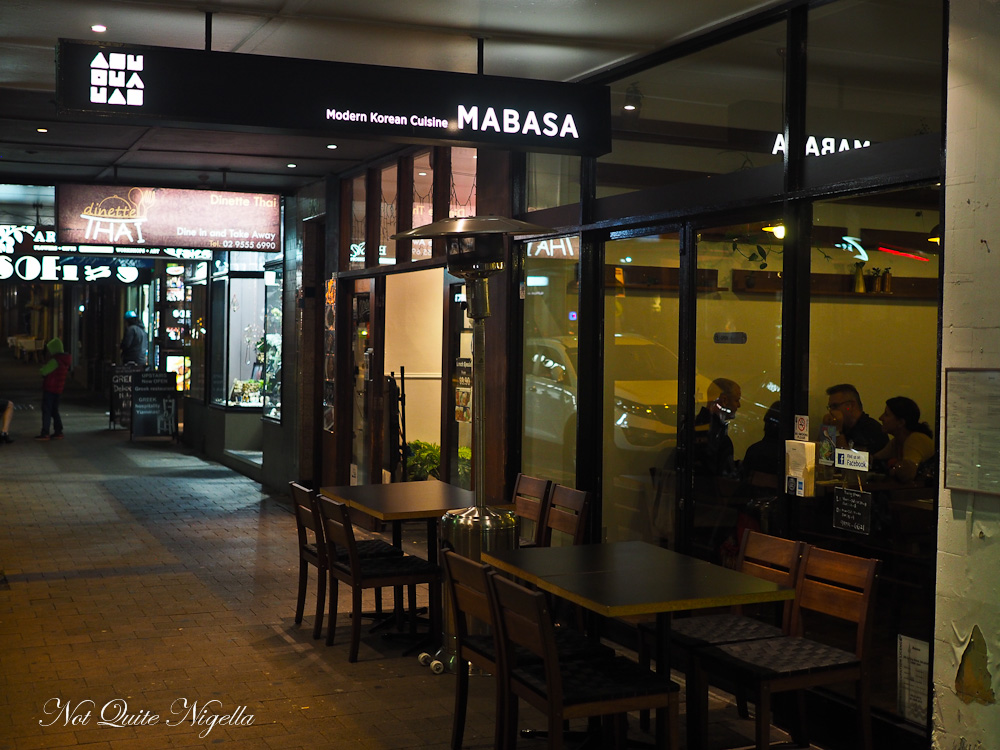 Mabasa is a modern Korean restaurant located on a quiet end of Darling Street in Balmain. A small family run restaurant, the menu starts with a little lesson on the Korean alphabet and then segues into traditional Korean dishes as well as some modern Korean interpretations. There are warming honey teas, perfect for winter as well as a Korean version of beef tartare, sizzling bibimbap as well as an entire rack of sweet Korean sauced American pork ribs.

I don't know about you Dear Reader, but when we eat out it's most often with a group of friends. It had been a long time since Mr NQN and I had a proper date together. He will occasionally ask if we can have a date night and I'm happy to oblige because I figure that if he wants to spend time with me alone that can only be a good thing. "Let's go to Mabasa!" I tell him. Based on the name he thinks that it might be African food but Mabasa on Darling Street serves up modern Korean (as well as traditional).

It's quiet this Saturday night, maybe it's because it is Winter. It is also the start of the Vivid light festival so maybe everyone that wants to go out is in the city. Service is friendly and helpful at Mabasa. Everyone says hello, even when you pass through the kitchen to avail yourself of their facilities. To warm up we start with some hot teas: a hot honey date tea for Mr NQN and a honey and quince tea for me. 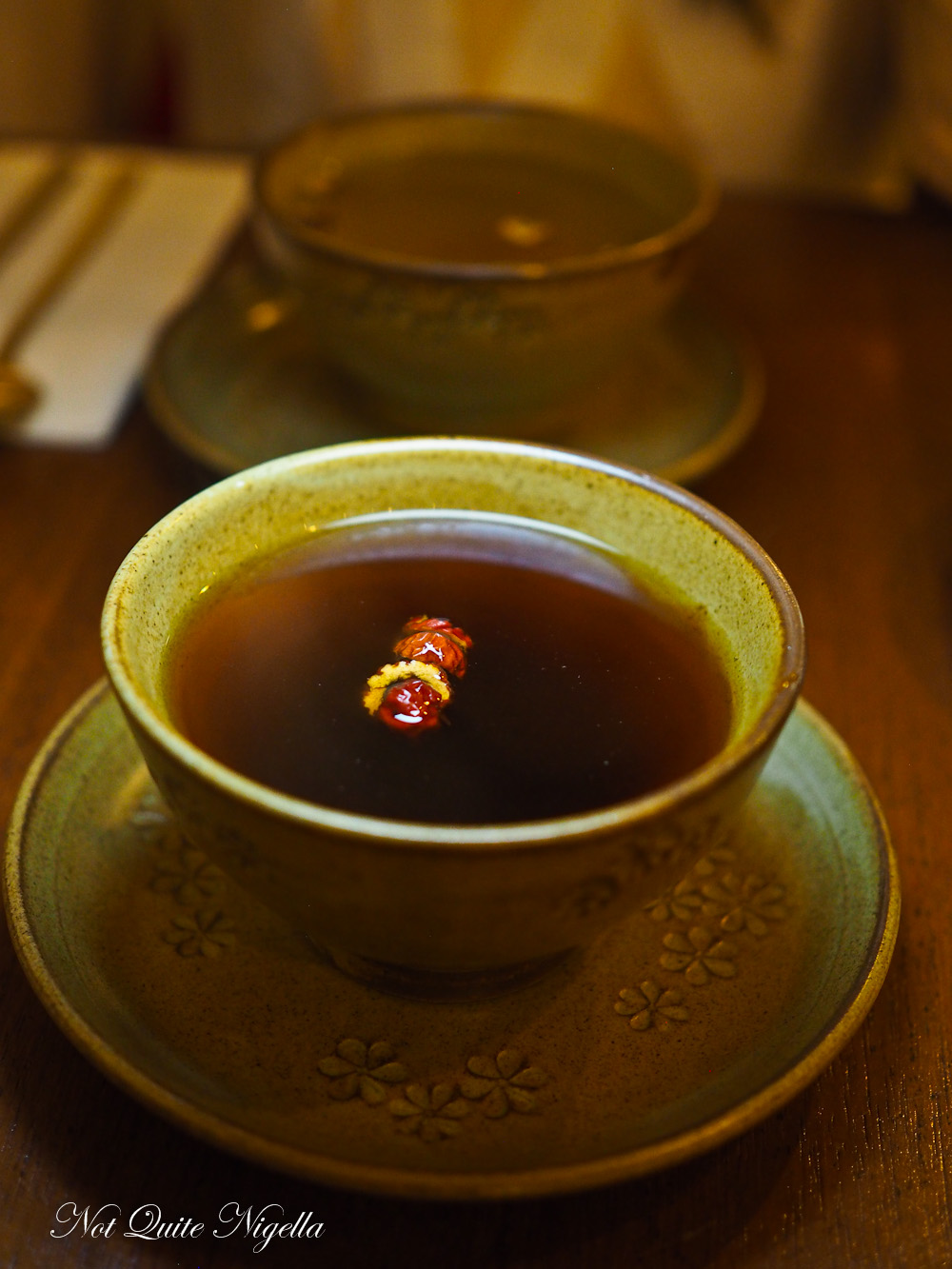 The hot date tea is smooth and sweet-like drinking liquid dates. Heaven. The honey quince tea has a nice tartness at the end. Another sweet number but oh so welcome in this chill! 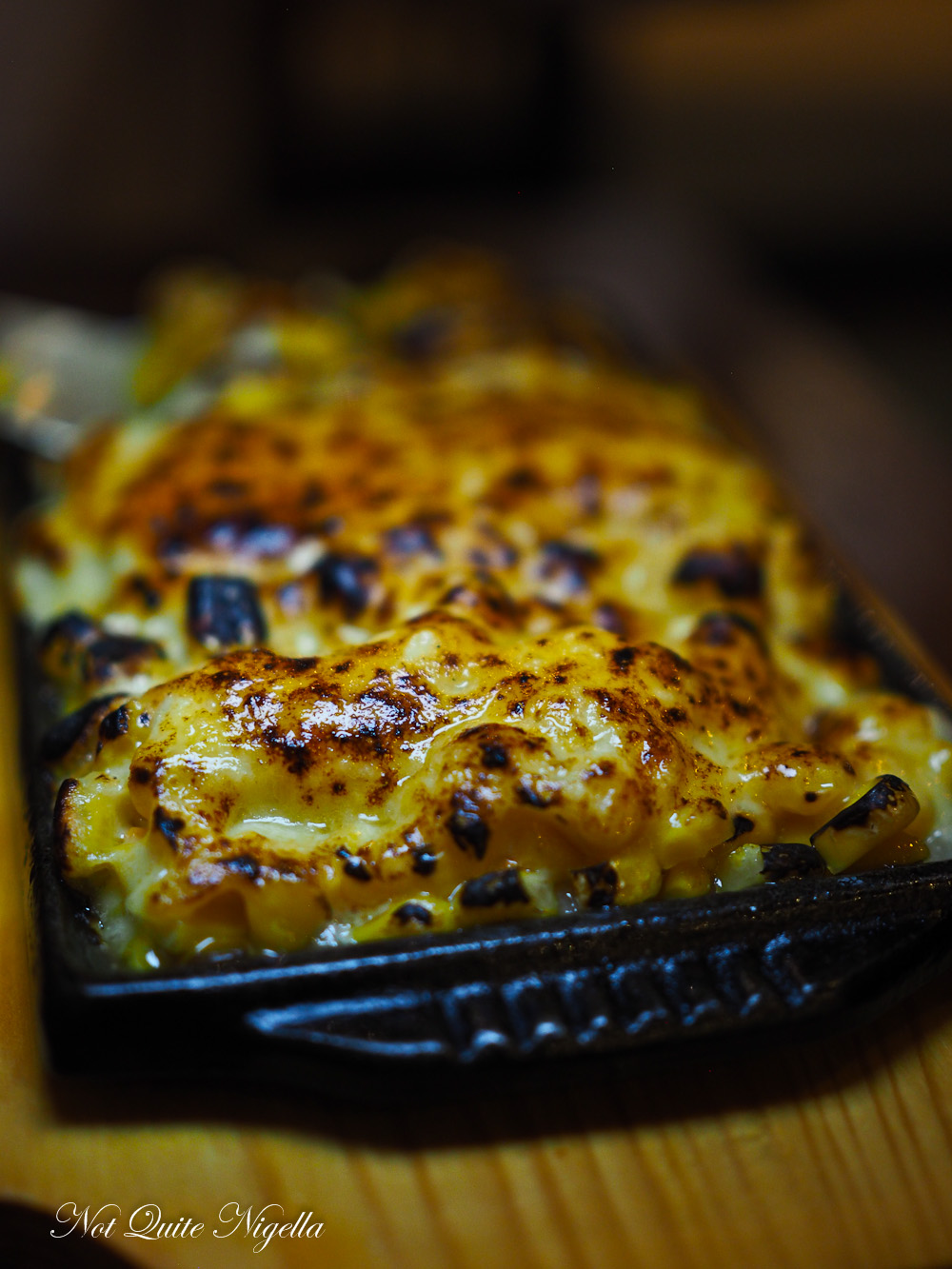 We dithered a little between choosing unusual dishes or traditional Korean dishes and decided to go for a mix of both. This simple but delicious side dish that comes out first. I'm a little in love with a cuisine that pairs up cheese and corn and then grills it so that the cheese is melty and blistered. There's some onion in there too and the whole thing is sweet and cheesy with just the right amount of savoury from the onion. 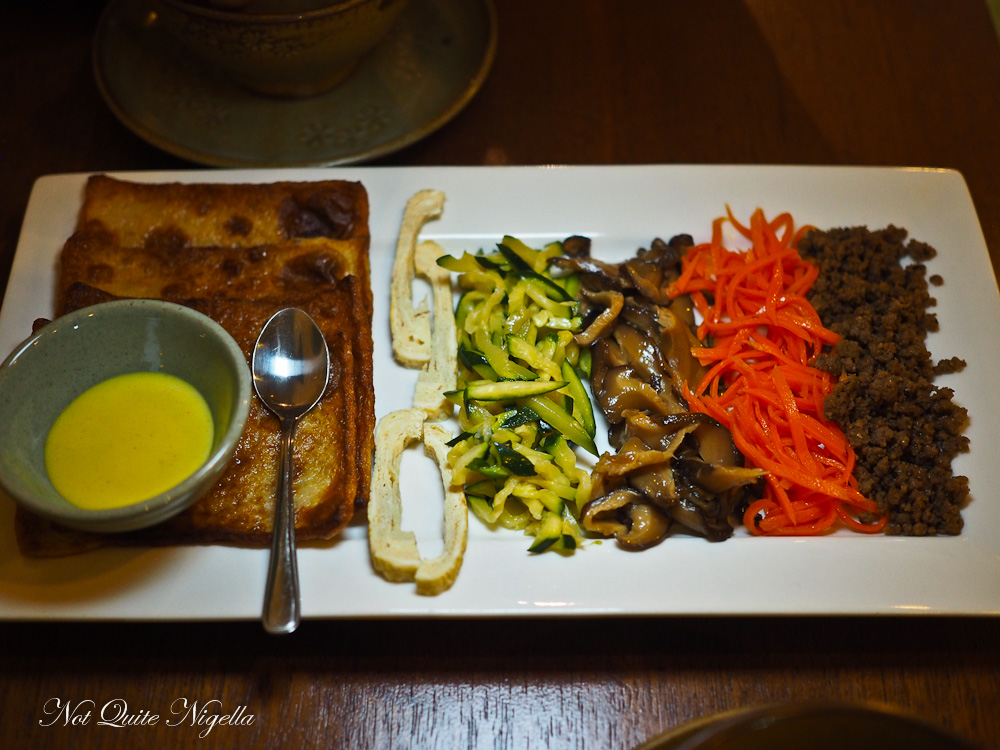 The wraps are a little DIY number that starts with four squares of thin fish cakes onto which you add seasoned mushrooms, carrots, zucchini, omelette and beef mince. There is a little side of creamy mustard sauce which is sweet and not particularly pungent on the side. They are nicely balanced and filling too which is a bit of a surprise. 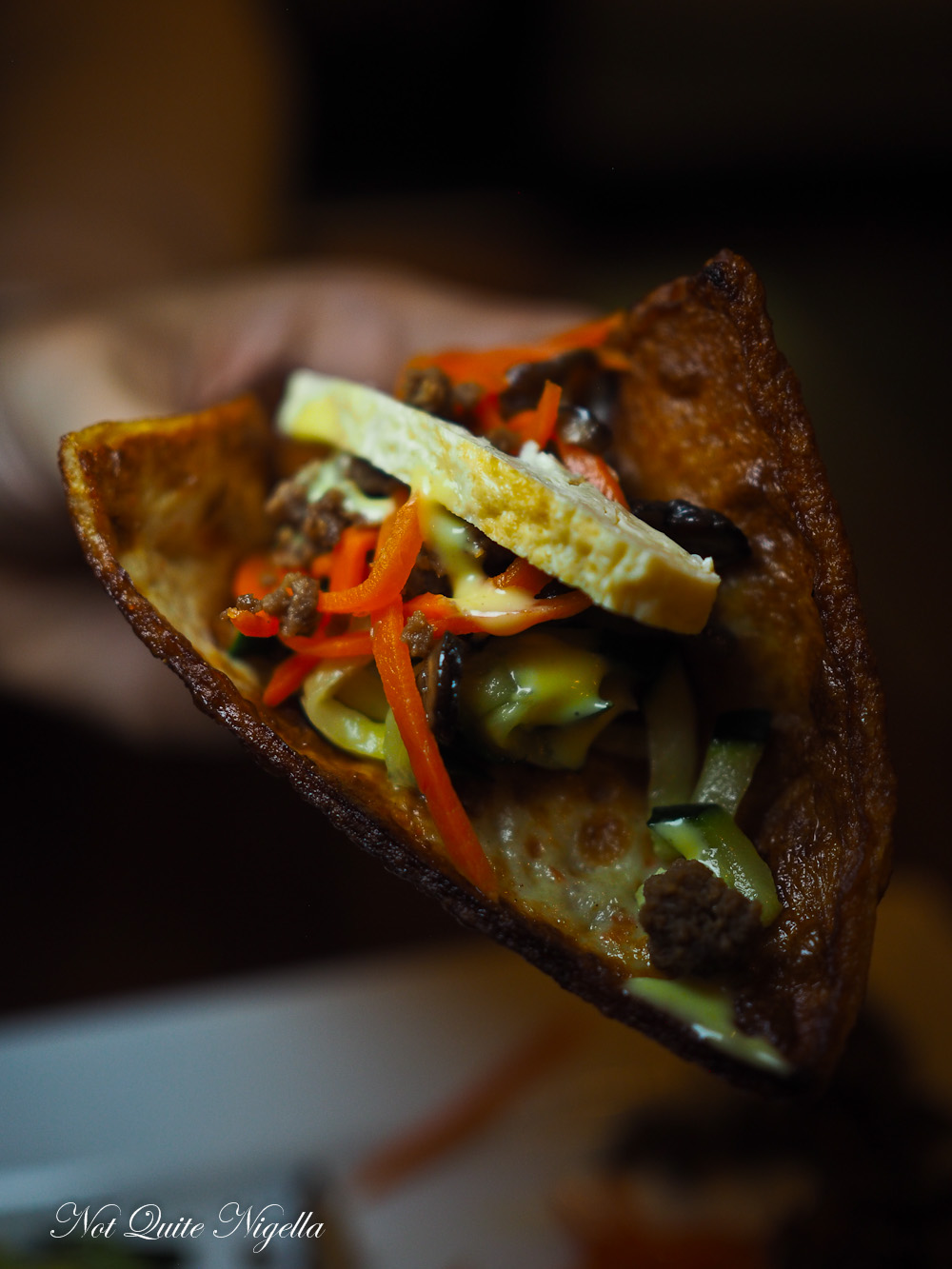 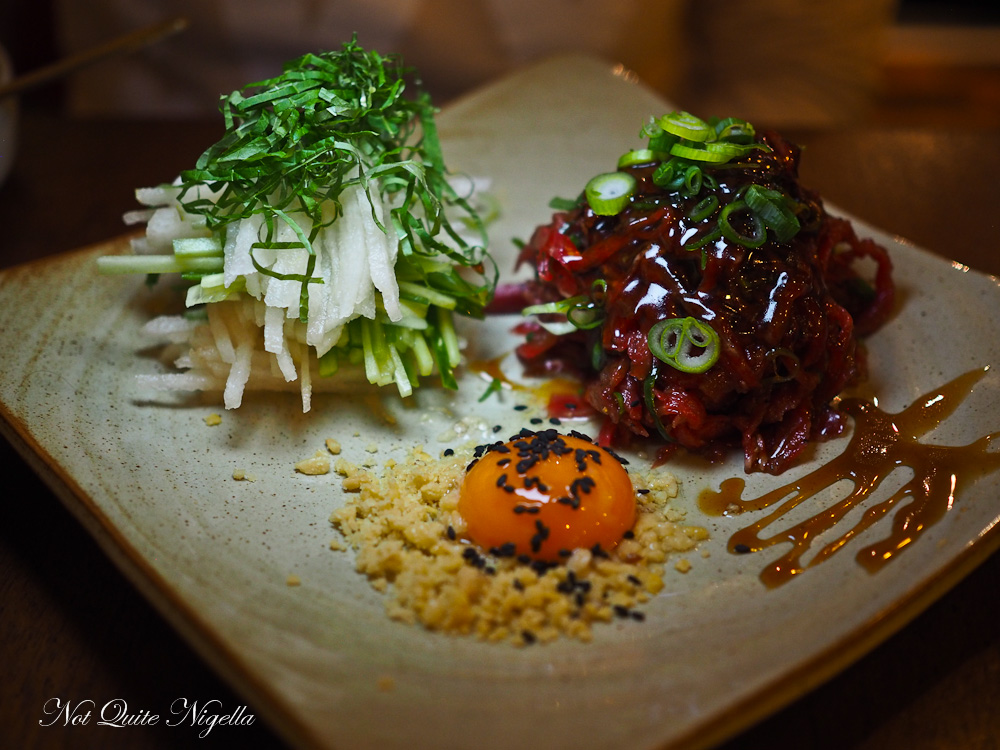 Their version of a beer tartare comes out next. It's beef slices and matchsticks of nashi pear, cucumber, raw egg yolk and spring onion. Whilst it doesn't have the mustard element or the Tabasco element (both that I think would work really well with it), it is noticeably sweet and juicy and an interesting take on beef tartare. 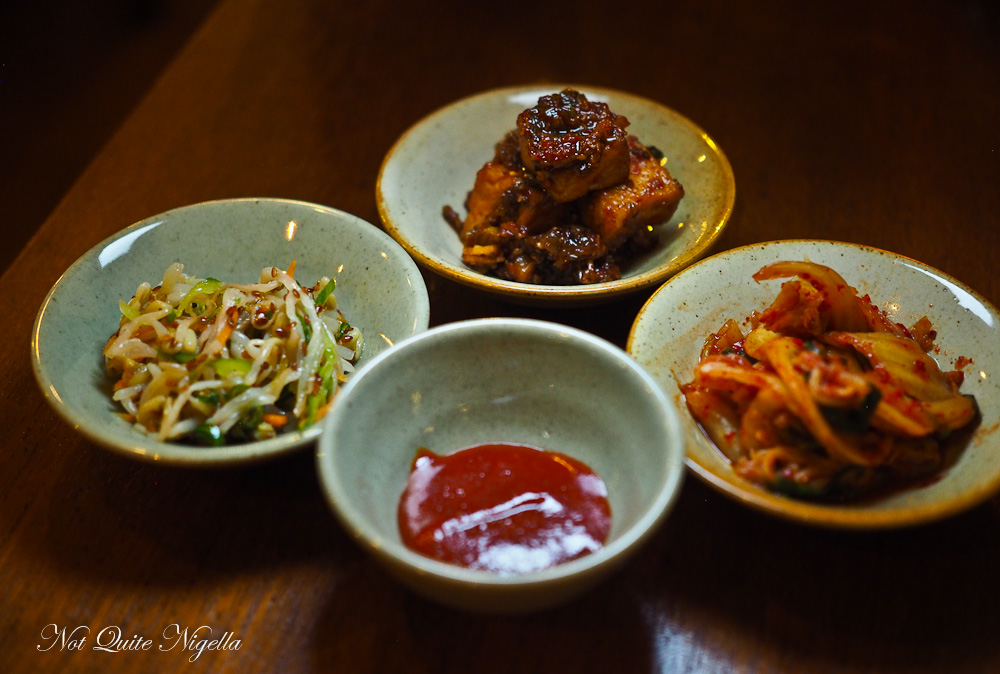 The banchan or side dishes come out just prior to the mains and there is an excellent home made kim chi, delicious tofu squares and a sesame cabbage salad that are all fantastic. If I could buy these in a take home pack, I would. 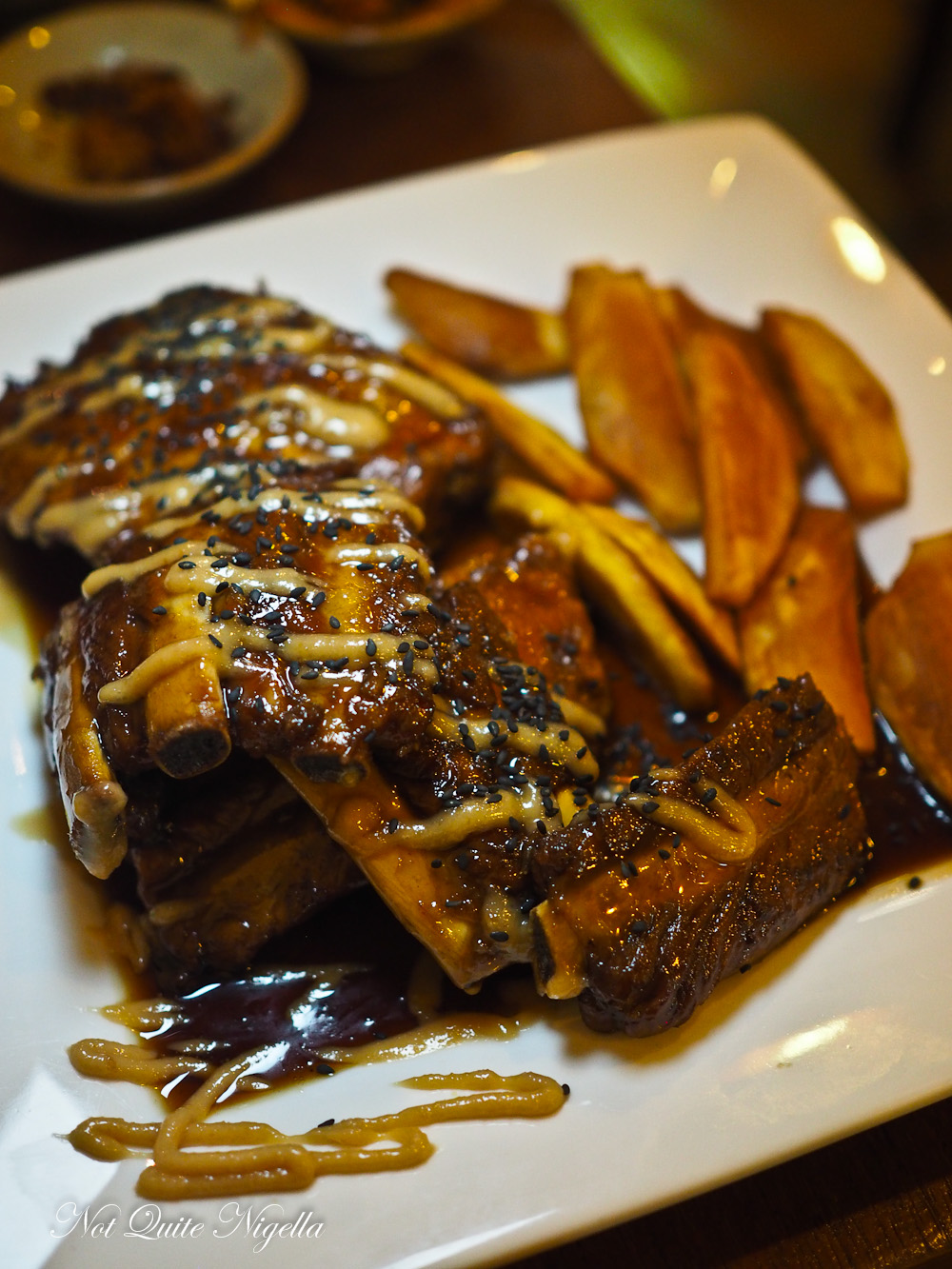 Although the menu does say that it is a full serve of pork ribs we had forgotten so when it arrives our eyes widen at its sheer size. The pork ribs are cooked in a honey and soy sauce marinade and on top is Mabasa peanut sauce. On the side are potato wedges which are perfectly paired when you dip them into the sweet, sticky sauce. The ribs are meaty and sweet and perhaps best suited to plain rice. 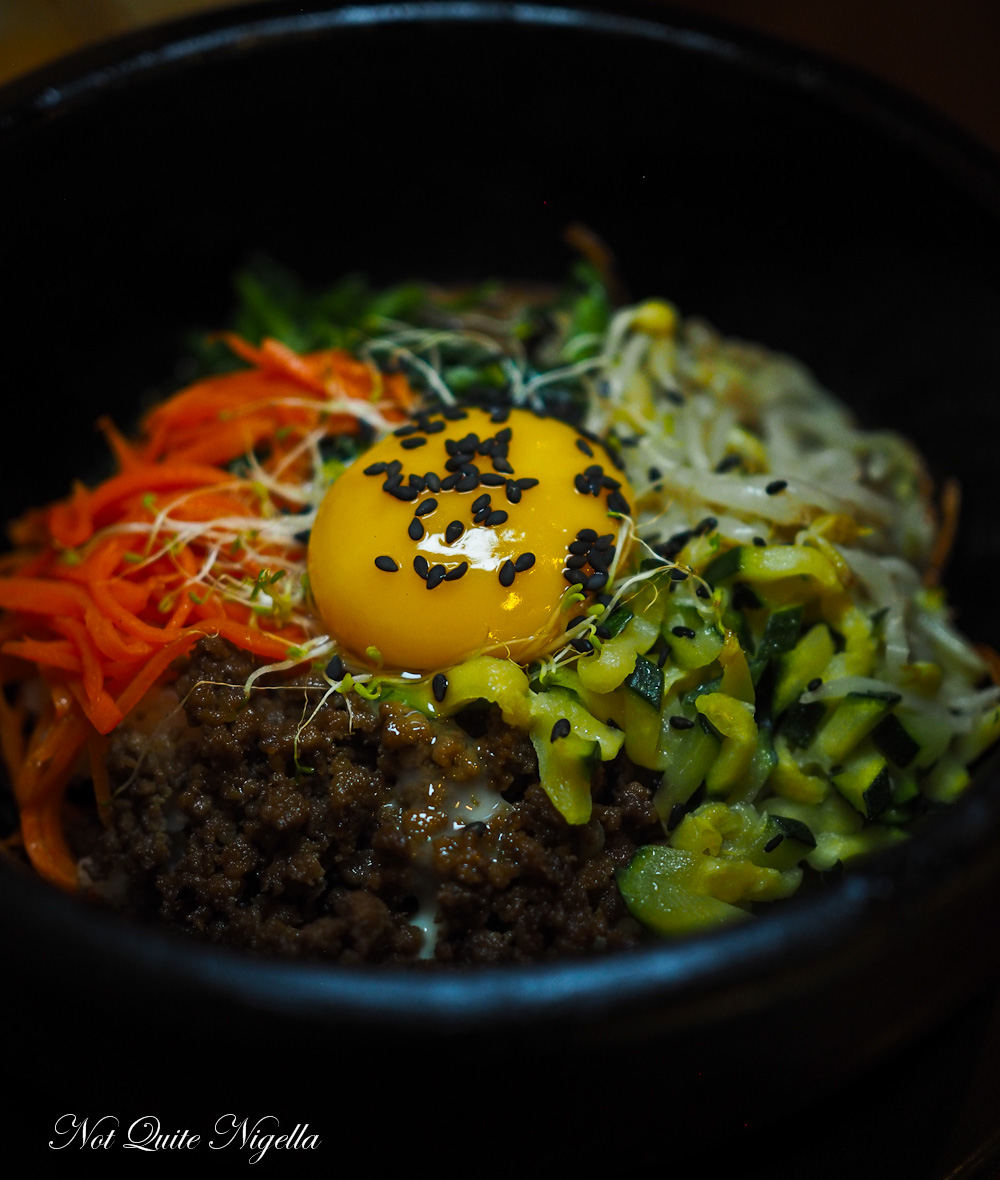 One of my favourite part of growing up in a Chinese household has to do with fried rice. Every Saturday my mother would make up a batch of it and I'd always prize the crispy bits of rice at the bottom. So when offered the choice of crispy bottomed bibimbap or not, the choice is always crispy. You can have minced beef or chicken and ours was just as minced beef although we didn't ask for it. We pierce the egg yolk and mix it about, scraping the spoon against the stone bowl. The chilli sauce, vegetables, beef and egg are such a comforting mix together. 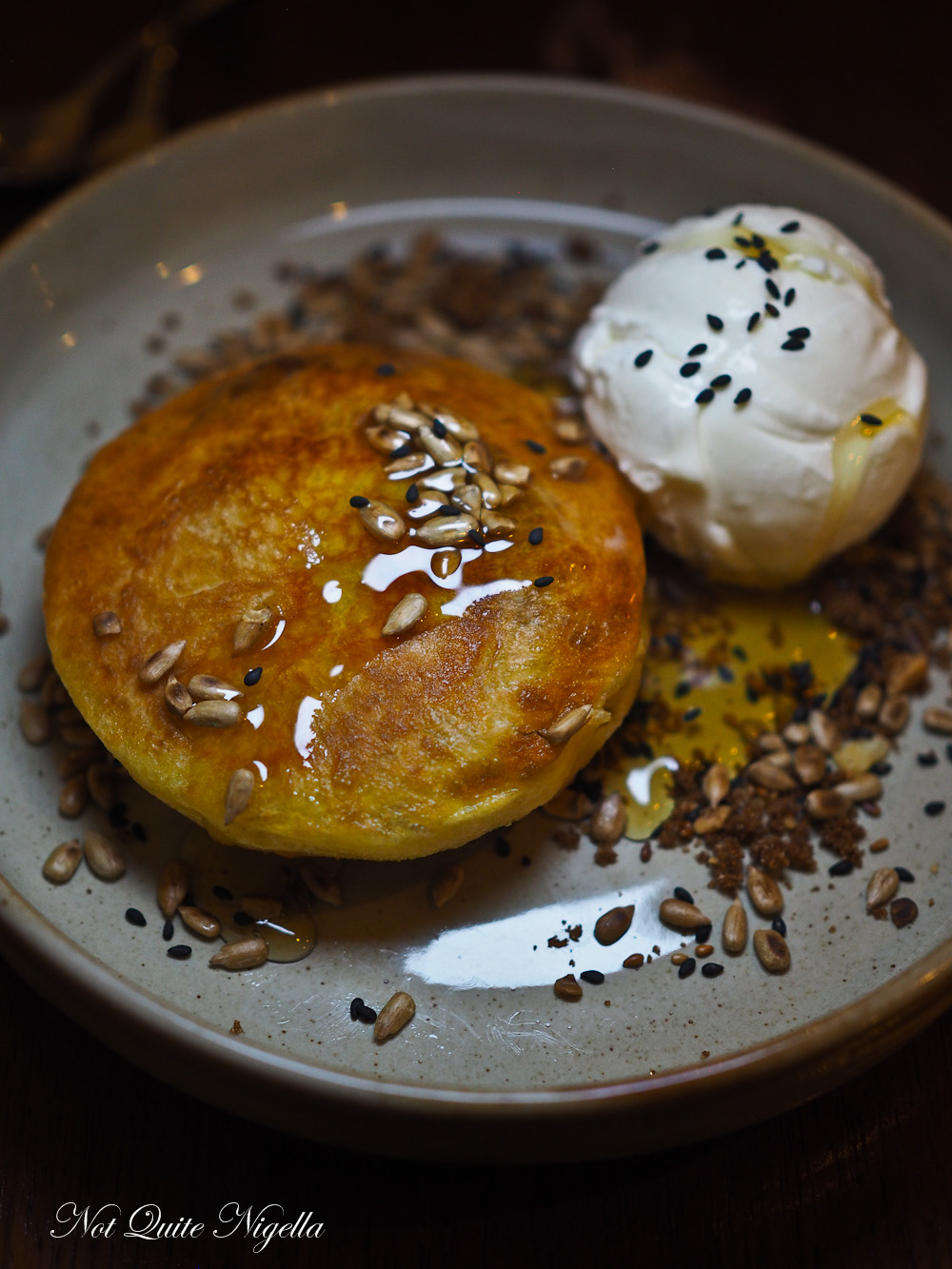 There are four types of dessert and given that Mr NQN was feeling too full to order dessert I felt like I would be pushing it if we ordered two. So we go with the recommendation which was one of the two that I wanted. The Hodduk is a Korean honey pancake that is fulled with dark brown sugar, sunflower seeds and sesame seeds with a scoop of vanilla ice cream. Truth be told I was a bit "meh" when I saw how many seeds there were because while I like the seeds, I'm not sure if I want a dessert to be that seedy. But once I tried it, I was smitten. Although there are lots of seeds, it never feels like that many if that makes any sense. They just taste nutty as they're toasted and the honey binds it all together while the ice cream gives the dessert the moisture that it needs.

Oh and what does Mabasa mean? It has to do with the Korean alphabet hangeul and the sounds correspond to three consonants in the alphabet!

So tell me Dear Reader, when you eat out, do you go as a group or as a couple most often? Do you go out less during Winter? And will you be catching Vivid?