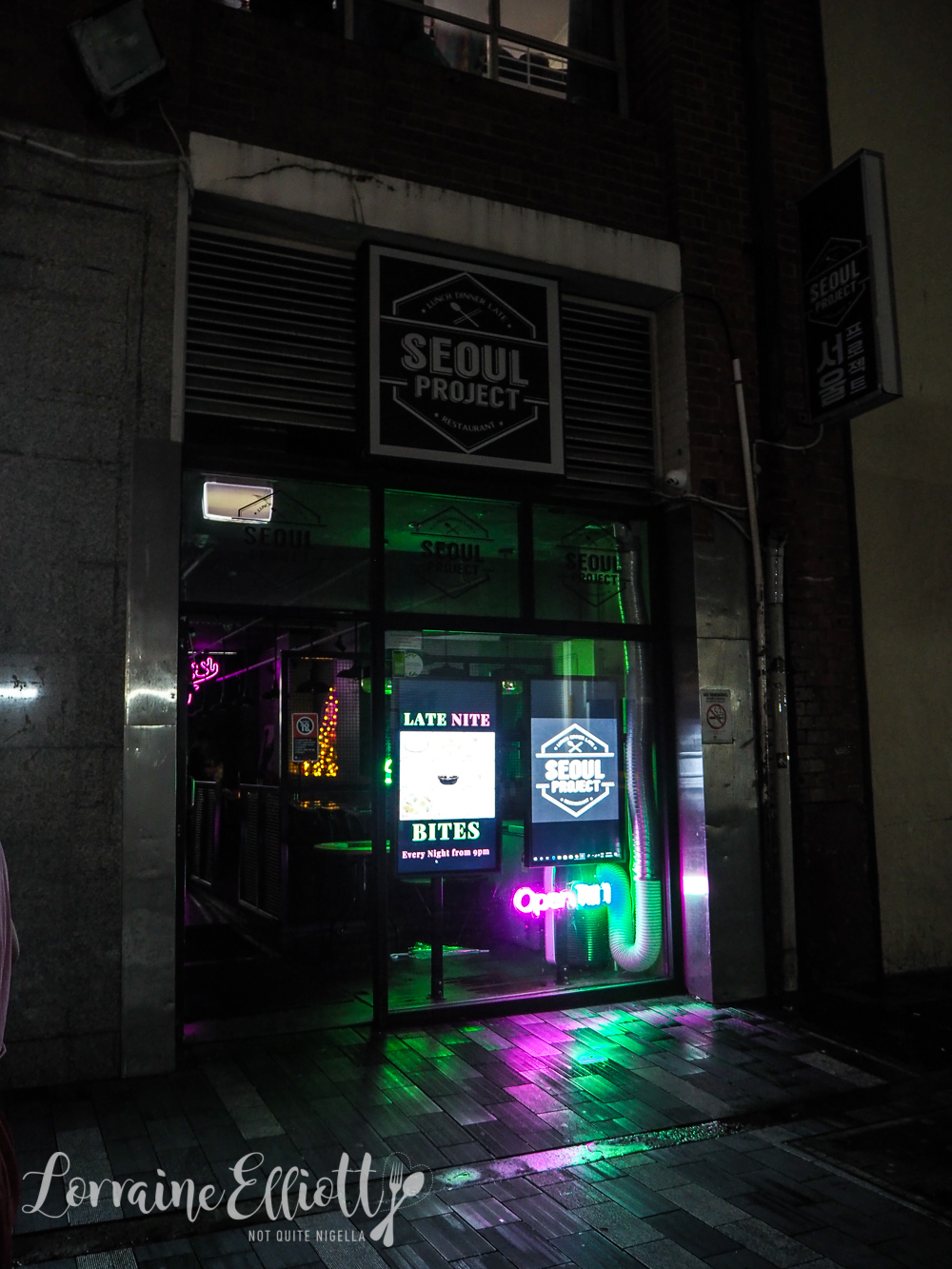 Korean Mexican? Is that even a thing? At Seoul Project there are Korean offerings but there is also a range of Korean tacos and quesadillas fusing Korean and Mexican cuisines. 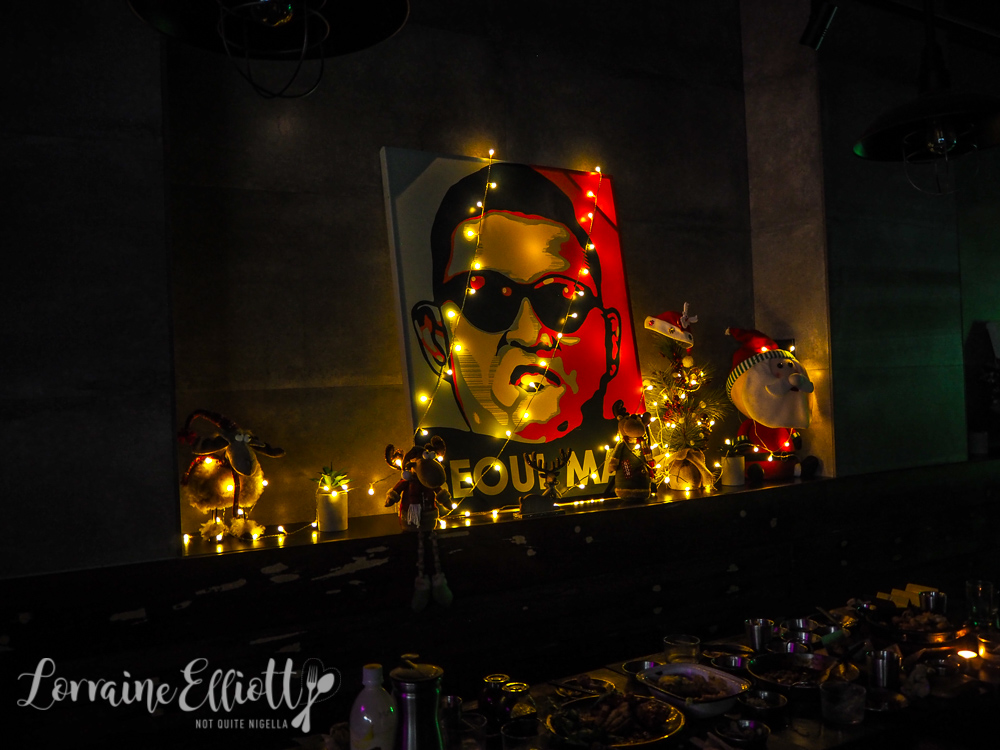 There was six of us: me, Mr NQN, JY, Ben, Nina and Garth and we had just completed an escape room with 10 minutes to spare so we were in a great mood and ready to eat. We follow Mr NQN down the street to Seoul Project. He had eaten there a couple of months before as it is near his work. Then we get there and it looks closed. "Is it open?" I ask. 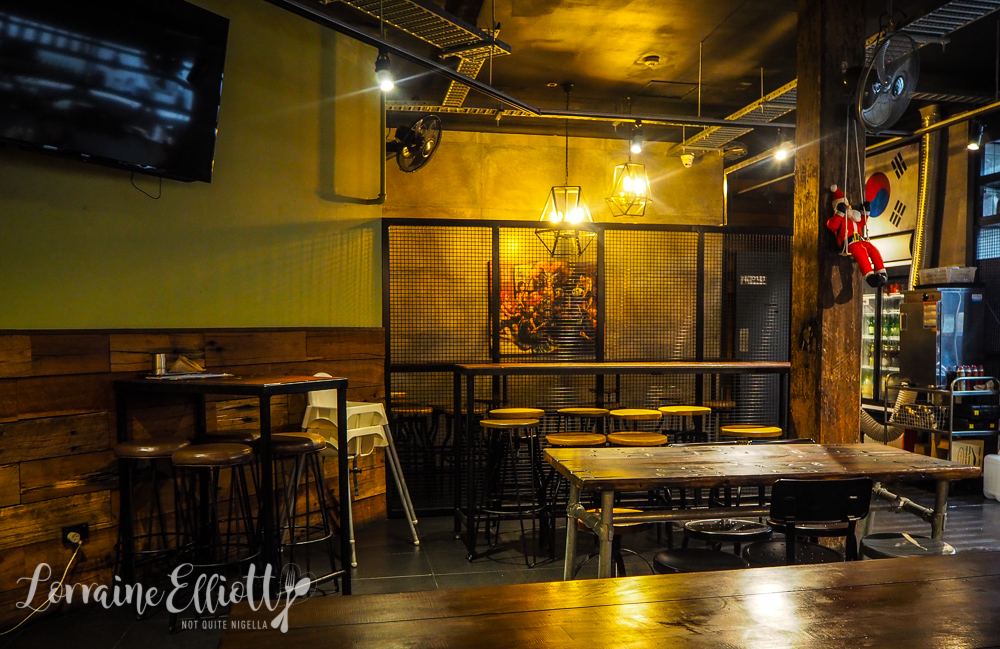 It turns out that there is a partial black out so there are lights in the kitchen but none in the restaurant save for the slightly incongruous neon Christmas signs. We take a seat lit with tea lights and get out our phones to shine a flashlight on the menu. JY and Ben improvise by placing their mobile phones in the lighting fixture above with the torches on so that we can see what we're doing. Service is friendly and sweet although there are some issues with communication. Nina asks for a glass of red wine and a beer glass is given. "Is it raining?" asks Mr NQN. Indeed, this whole afternoon it was pouring rain and the menu says that the Makgeolli ae $7 each when it is raining. "Oh that's not on weekends" our waitress says although that condition isn't stated anywhere on the menu. 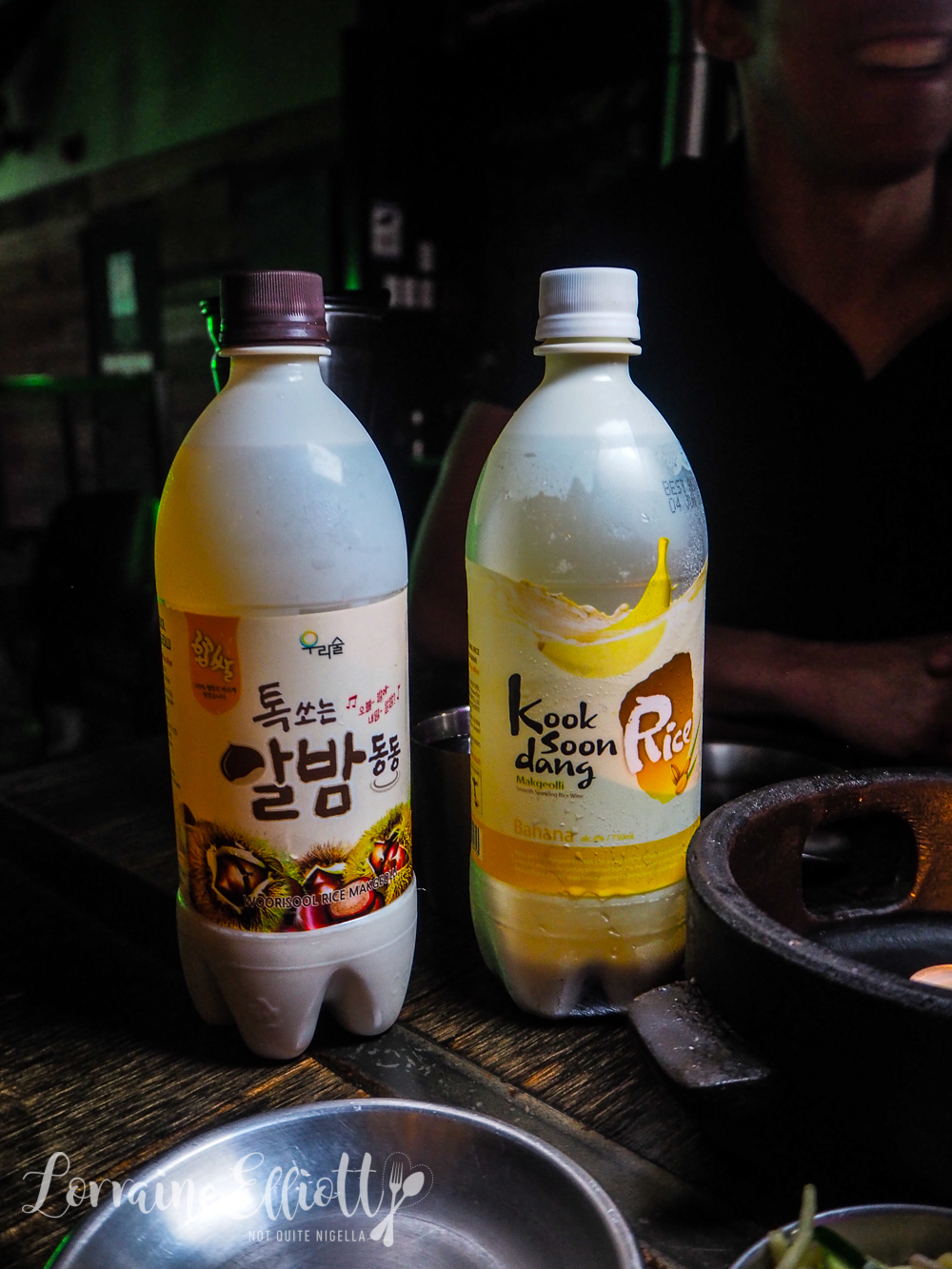 Chestnut and banana makgeolli $13 each

So instead of ordering all of the makgeolloi we try just two of them, a banana and a chestnut one. Makgeolli is a Korean lightly sparking alcoholic rice wine with a milky sort of look to it and it's sweet and fruity. 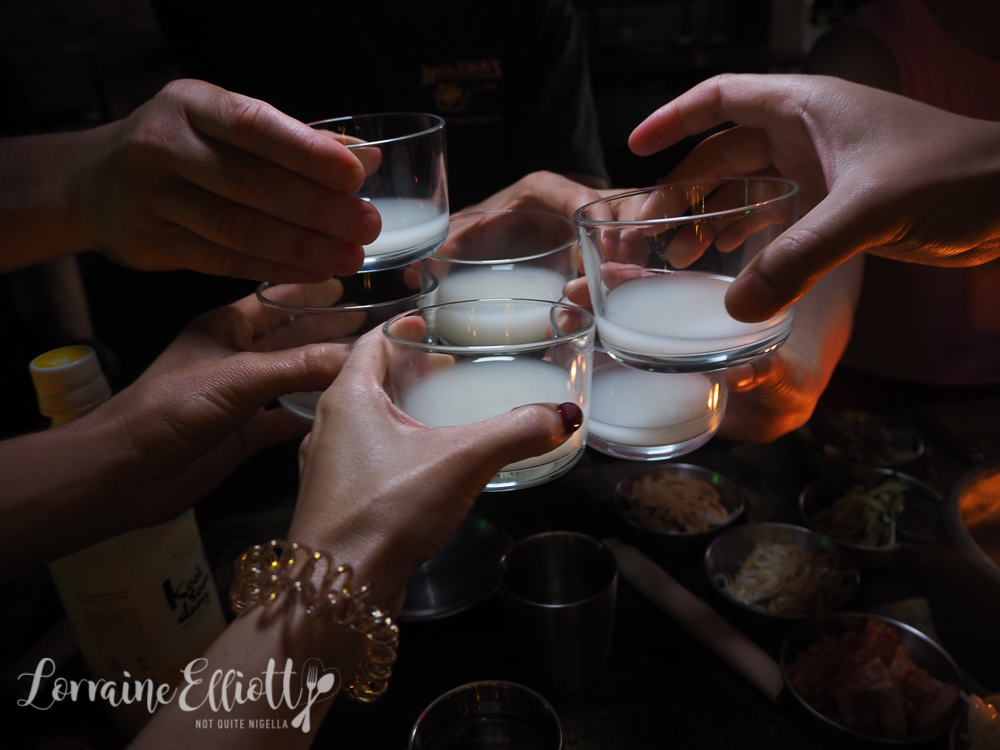 The chestnut is vaguely chestnutty at the end but the banana one is sweet and refreshing. Having said that I much preferred it at Jang Ta Bal when they served it to you in metal cups that brought out the flavour and its cooling properties. It makes a big difference. 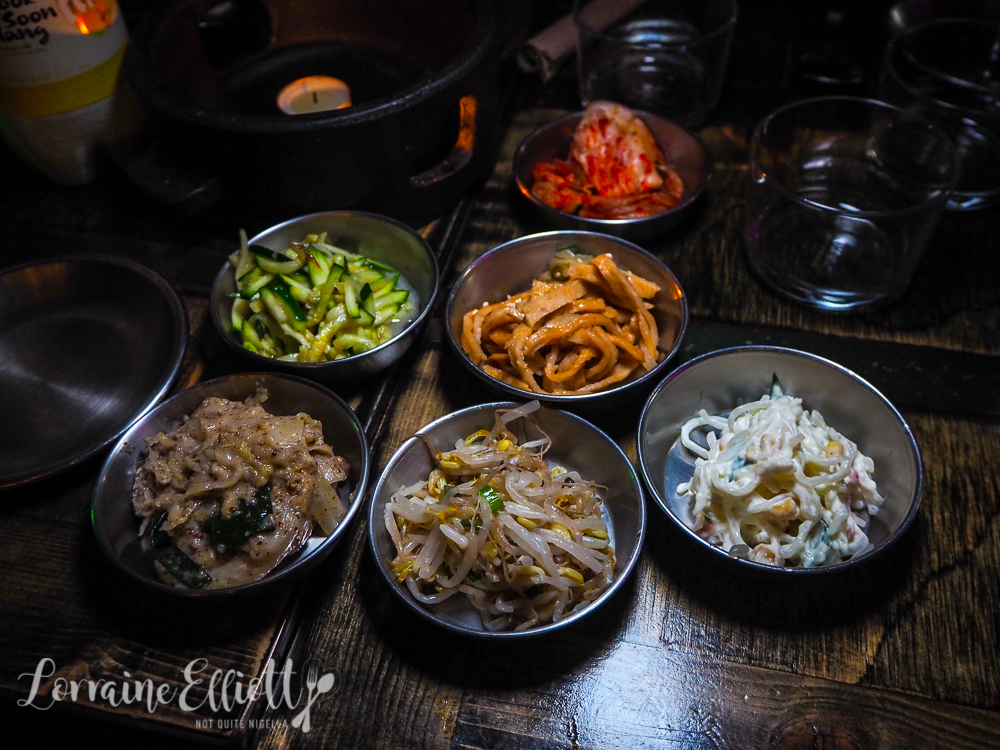 Along with drinks arrives the banchan, the complimentary side dishes offered at Korean restaurants. These vary according to each establishment and I must say that I really enjoyed the ones here a lot. There's kim chi, sesame bean sprouts, tofu strips and other vegetables. 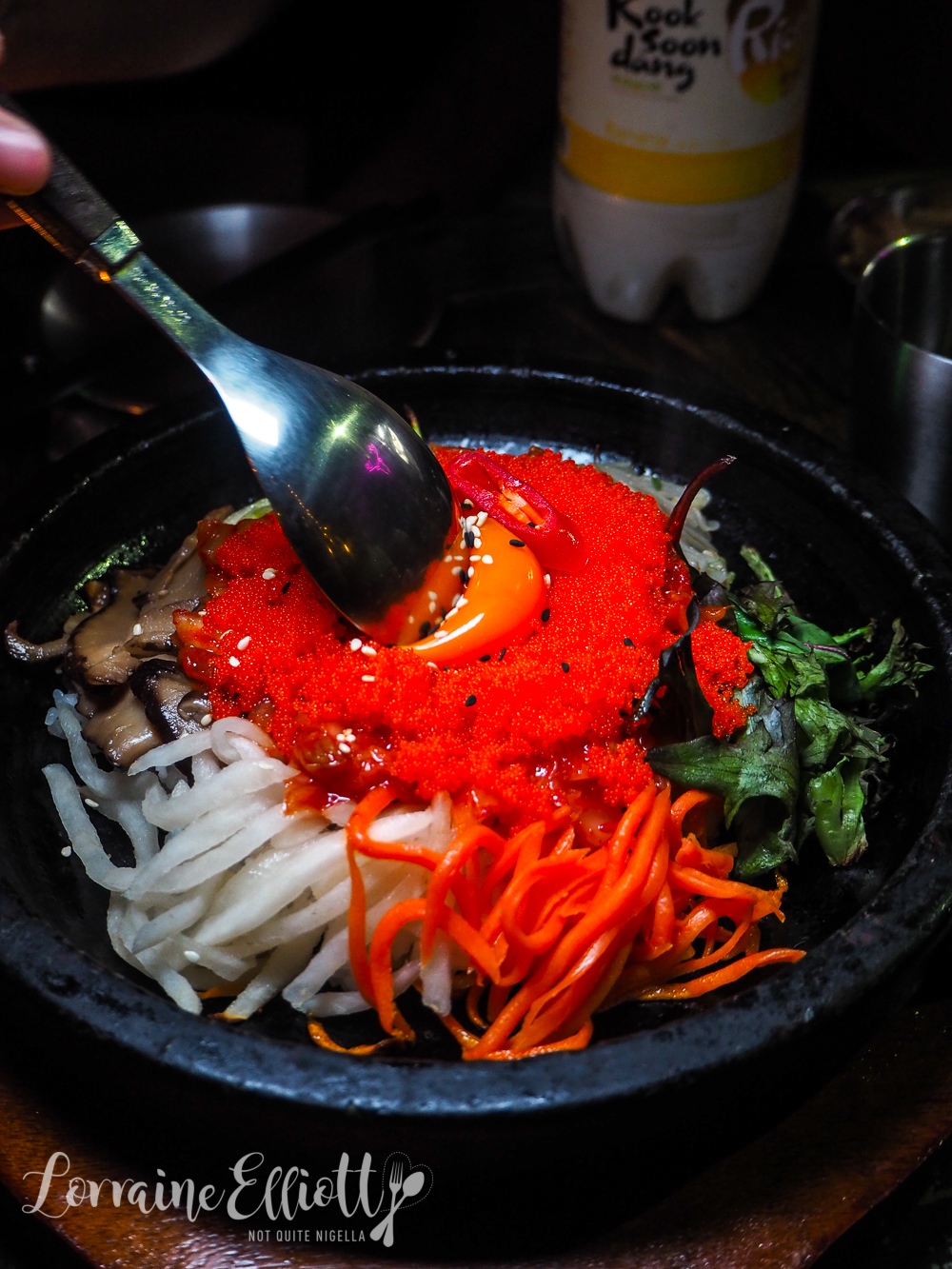 While we mostly tried the Mexican Korean offerings we also wanted to try one bibimbap dish and the one that looked the most interesting was the one with kimchi and flying fish roe. There's certainly a generous amount of tobiko or roe on top. But still I don't think it ever reaches the heights of a beef bibimbap. 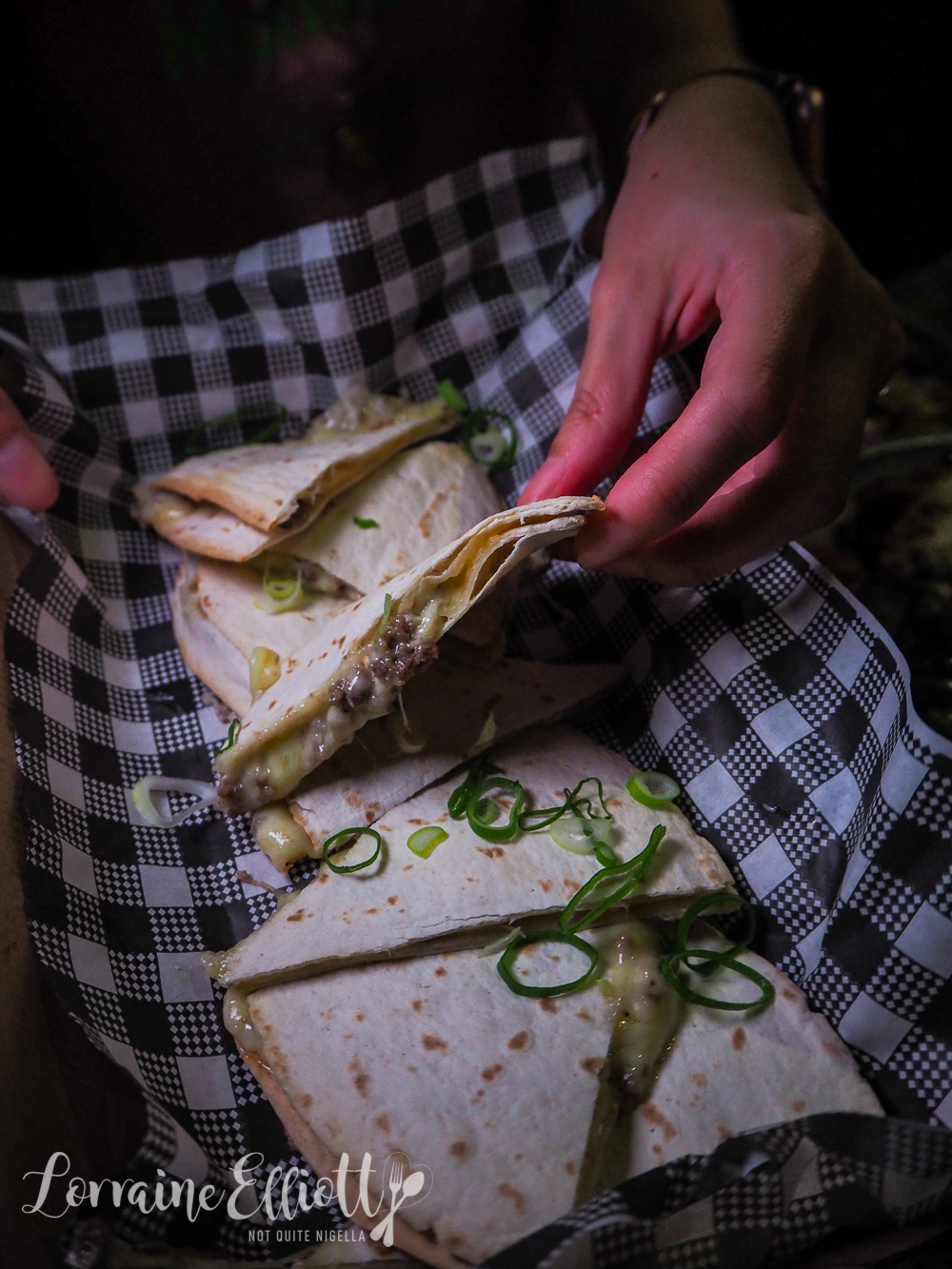 We loved the idea of a beef bulgogi quesadilla. It's a simple dish of two flour tortilla stuffed with a modest amount of beef bulgogi, mozzarella cheese and caramelised onion. It's not quite as filled looking as in the picture but the flavours are good. 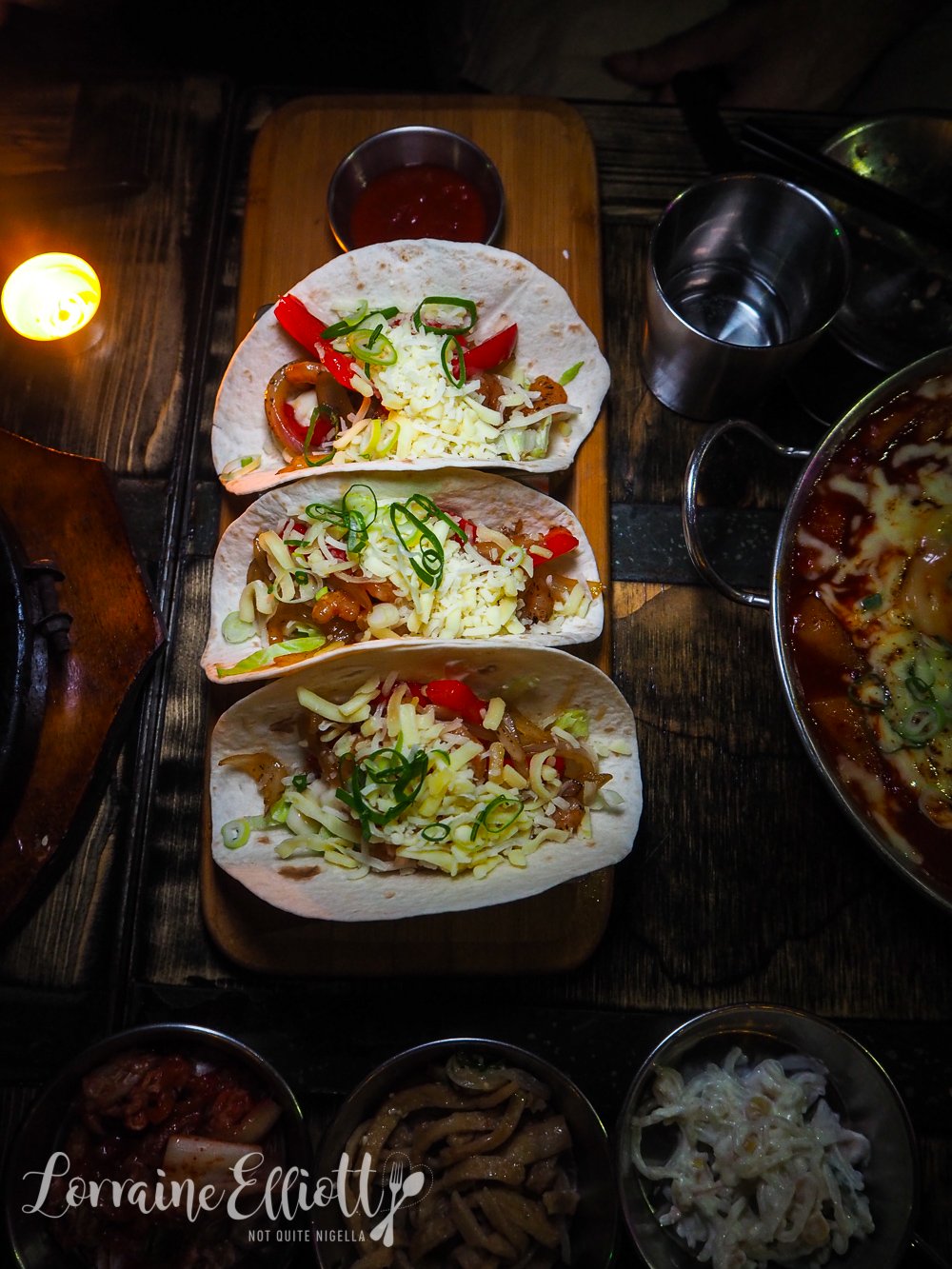 There are a few varieties of taco (chicken, beef bulgogi, vegetarian) but we opted for the marinated shrimp soft taco with sweet corn, kimchi slaw and sour cream. The flavour in these are very good although I didn't taste that much shrimp or prawn in them. There's a side of chilli sauce as well for dipping. 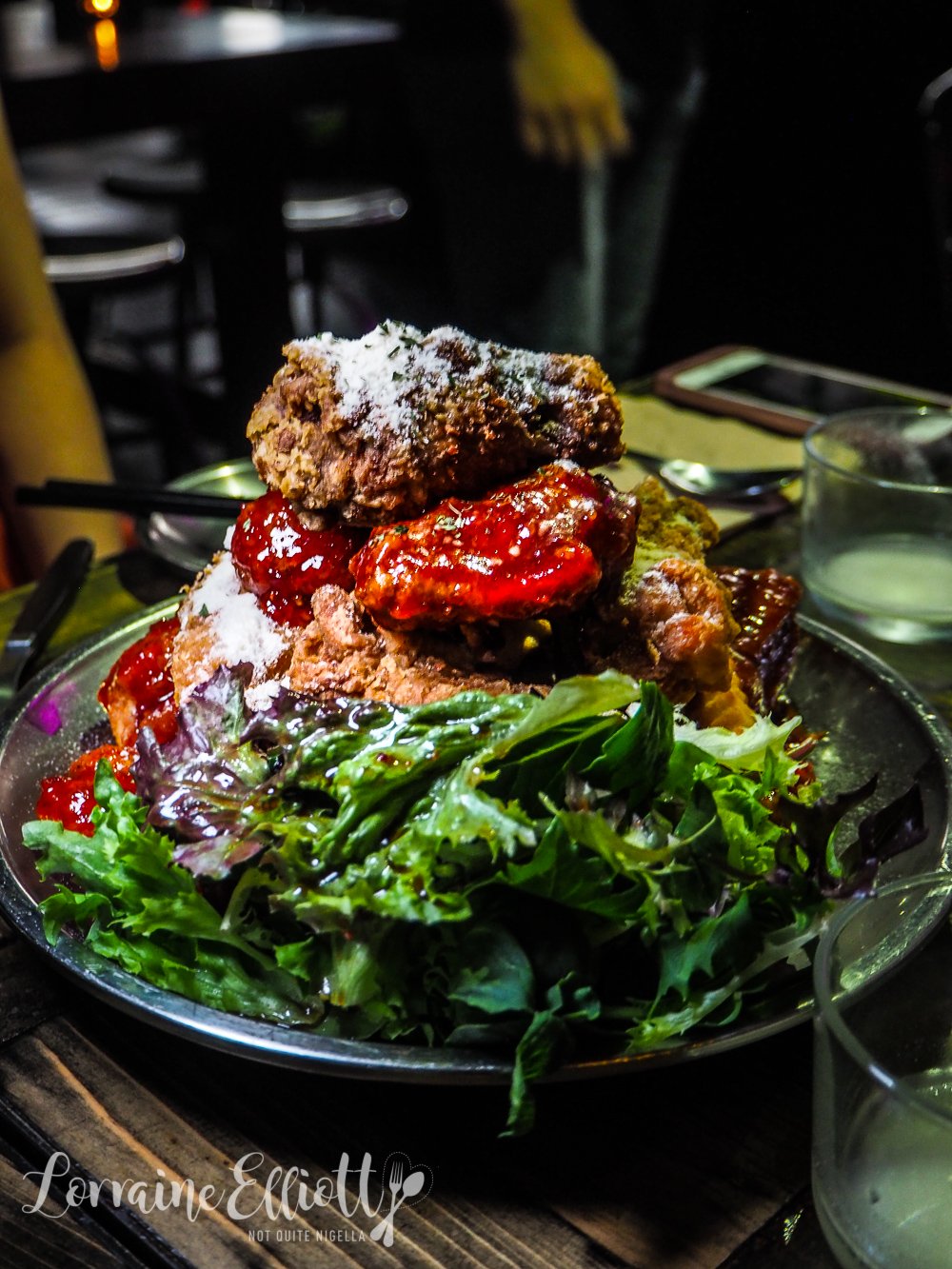 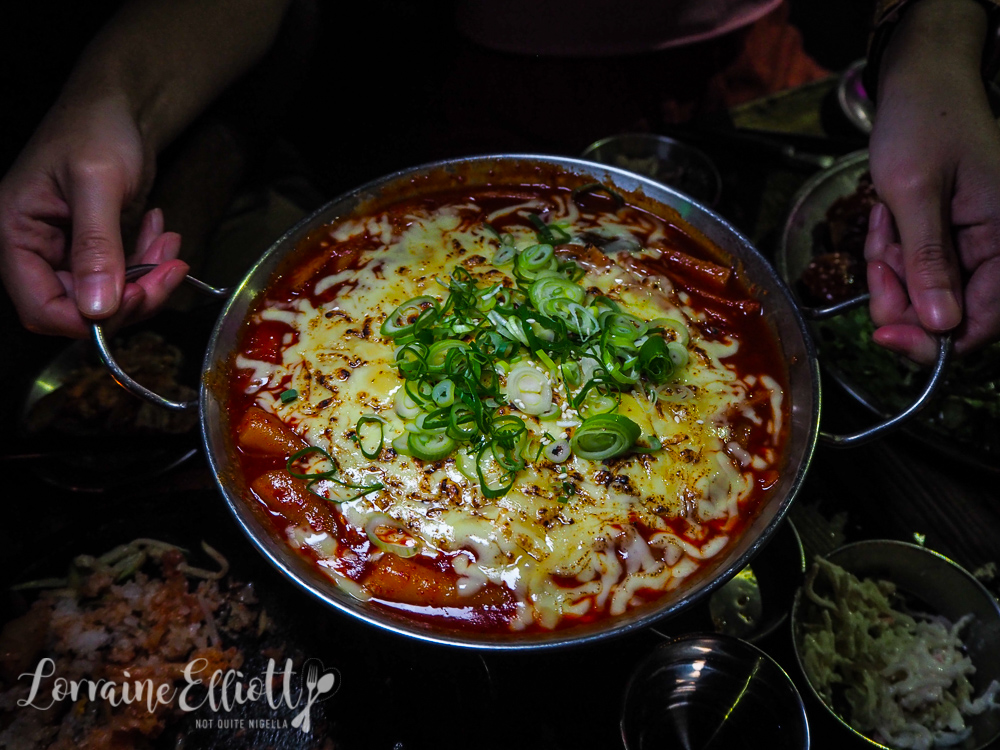 The cheese ttebookki is fries, tofu strips and rice sticks in a rich, spicy (but not overwhelmingly so) sauce smothered in cheese so you get glorious cheese strings when you serve yourself. I love the texture of the chewy rice sticks and go back for several servings of this. 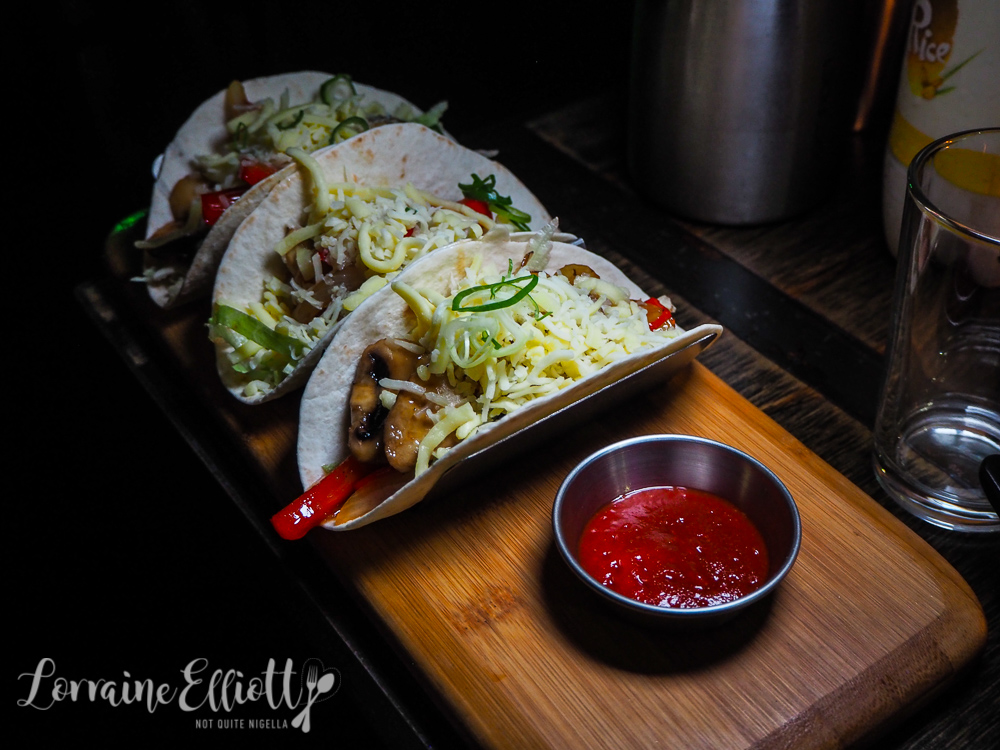 Nina loves her vegetarian tacos and declares them very tasty. 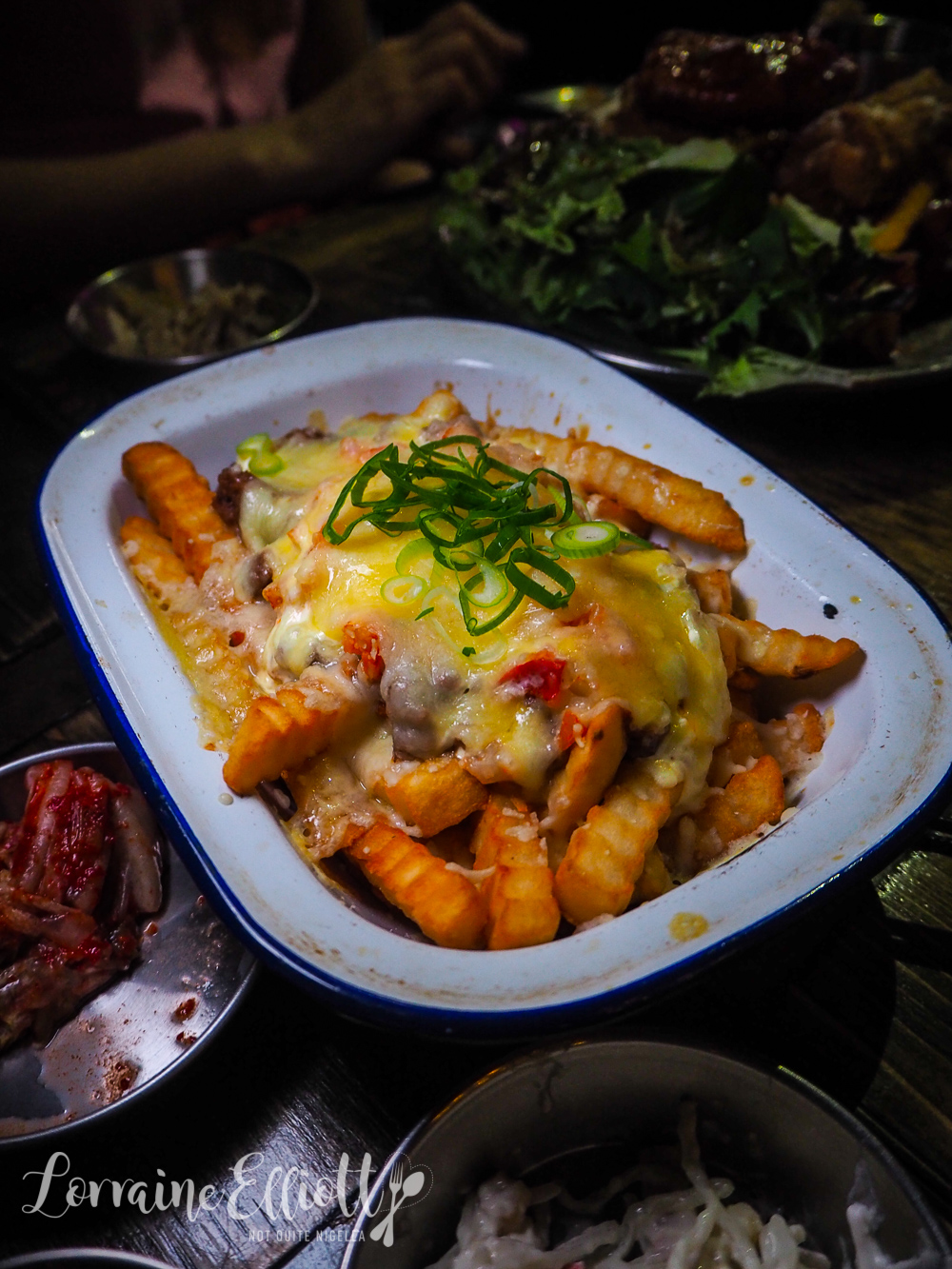 The only dish I wasn't super fond of was the kimchi fries. The chips were quite soggy and yet at the same time the dish was quite dry. I find that French fries keep their texture better when loaded up with toppings and this mostly went uneaten.

By now the lights have flickered on and off quite a bit and by the time we finish they stay on for longer. There's no dessert on the menu so we go elsewhere for a sweet fix!

So tell me Dear Reader, have you ever been to a restaurant during a black out? Have you ever tried Korean Mexican food?