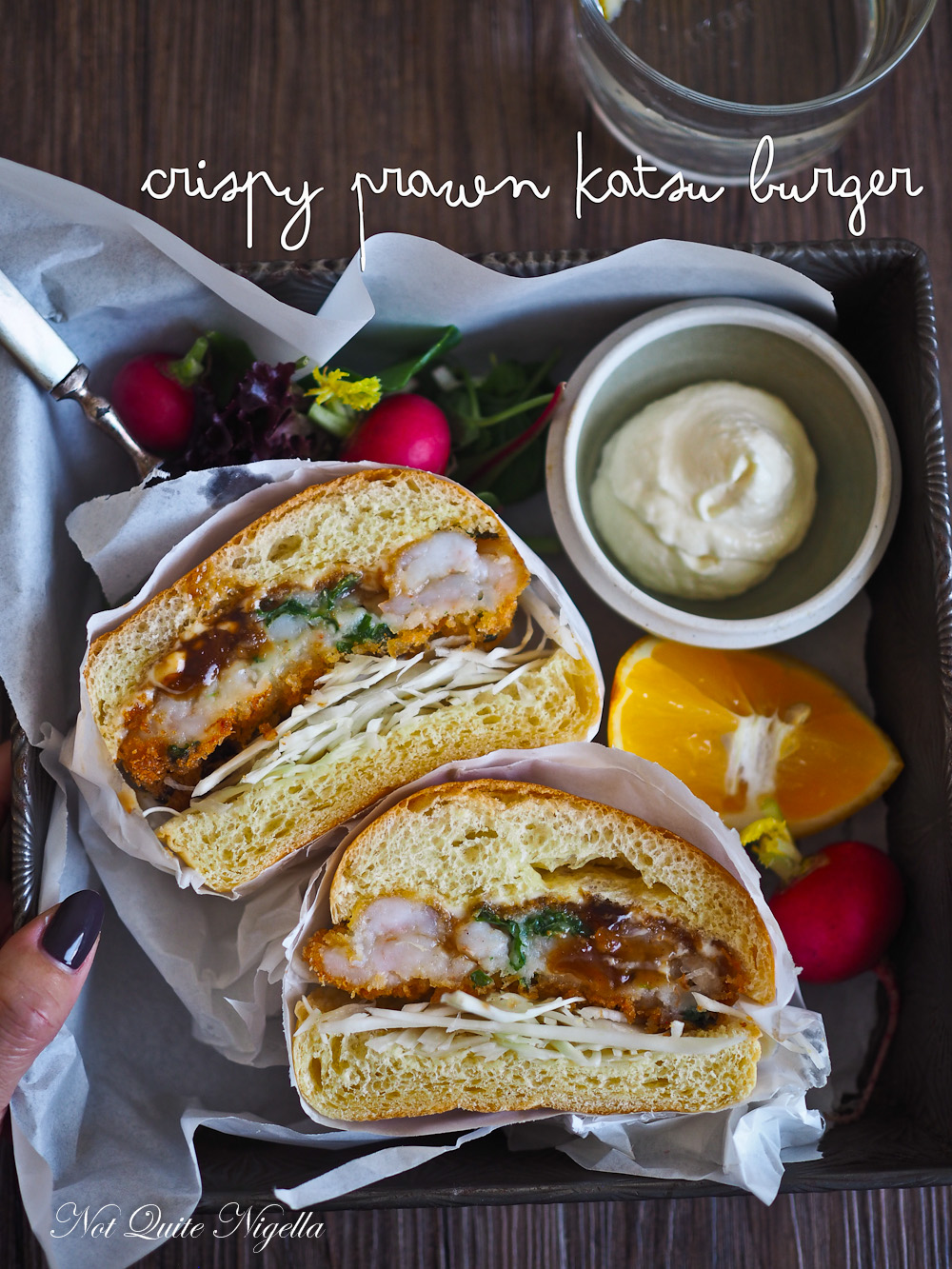 Love crunchy prawn burgers but want to make your own at home? Making them is much more economical than buying them and you know exactly what goes into them. These crunchy Japanese prawn katsu burgers or ebi katsu are easy to put together and in 20 minutes you could be sinking your teeth into these golden crunchy burger patties. Downy soft brioche buns are filled with an all prawn patty, finely shaved cabbage and a mix of tonkatsu sauce and mayonnaise.

To make these I actually used a bag of frozen prawns that I thawed. I had just walked into the fishmongers just as they were about to close and all the prawns were completely sold. I've never used frozen prawns before but it ended up being not such a bad thing because the bagged prawns were already peeled and all I had to do was defrost them and chop them up roughly and mix them with a mix that I learned from my mother.

I tested out two kinds of prawn burgers: one with the prawns minced up and one with the prawns chopped up. I preferred the latter although the minced prawn version was easier to shape and bread. But I think I liked the actual texture of the chopped prawns. My mother makes prawn toast with the same mix. 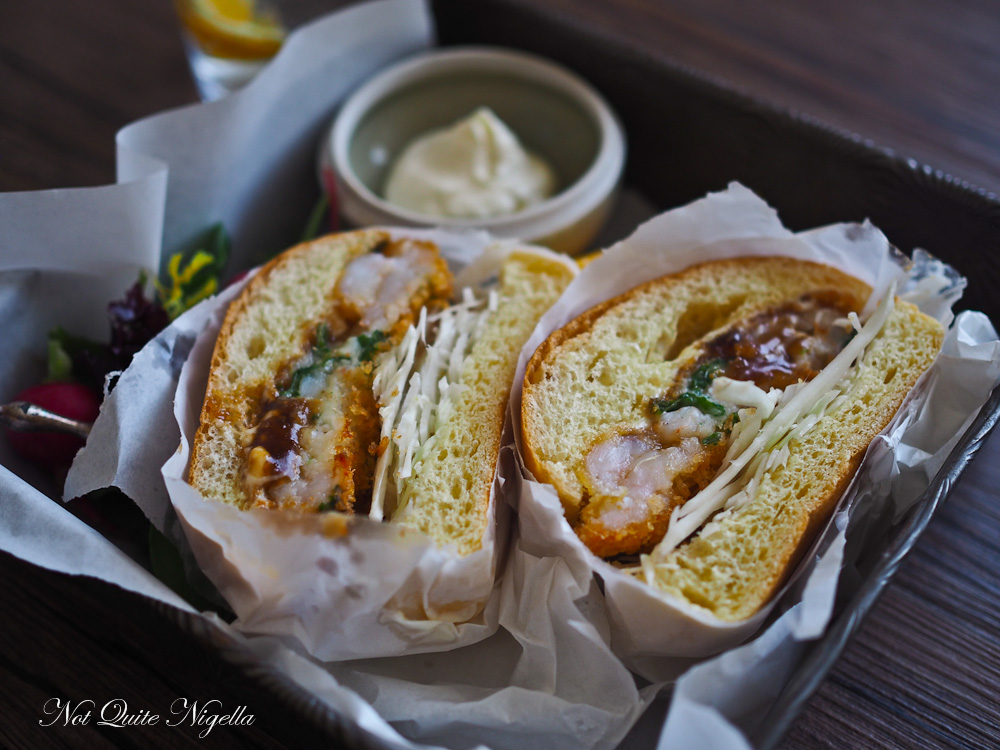 After dinner one night Mr NQN and I were driving my parents home. Growing up there were only two topics of conversation: school and food. And so while our conversation repertoire may be quite limited (we're all terrible at making smalltalk) we just love talking about food.

I love mayonnaise the way that my mother loves the chicken's bum so I have added quite a lot of mayonnaise as a side just in case for dipping. I think the katsu sauce gives the prawn burger a richer taste but it is quite strong and fruity so it can overpower the prawn taste. If you find it too much just use mayonnaise by itself.

So tell me Dear Reader, what is your favourite chicken part? Do you ever eat the chicken's bum or bishop's nose? And do you tend to use fresh or frozen prawns? 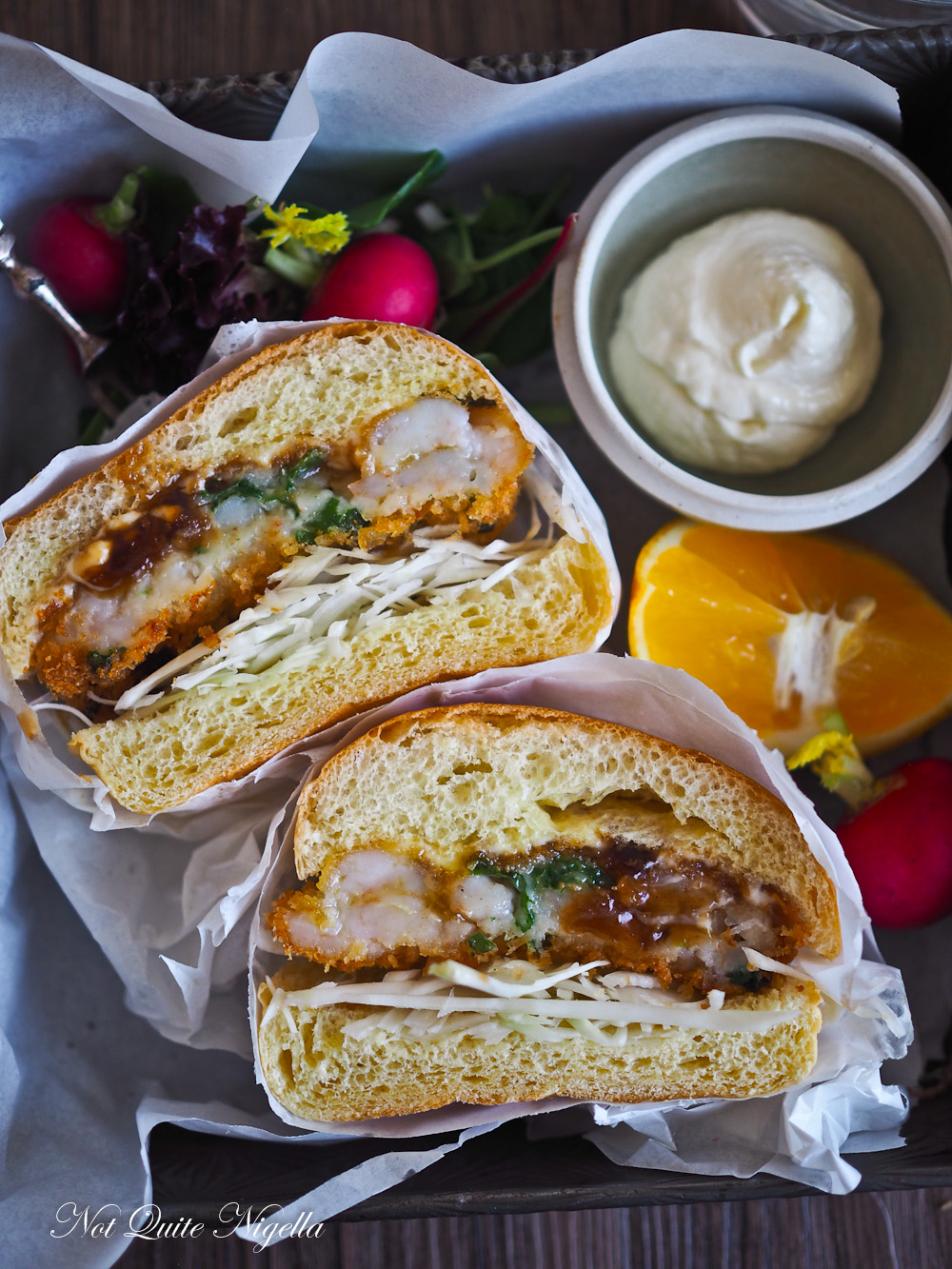 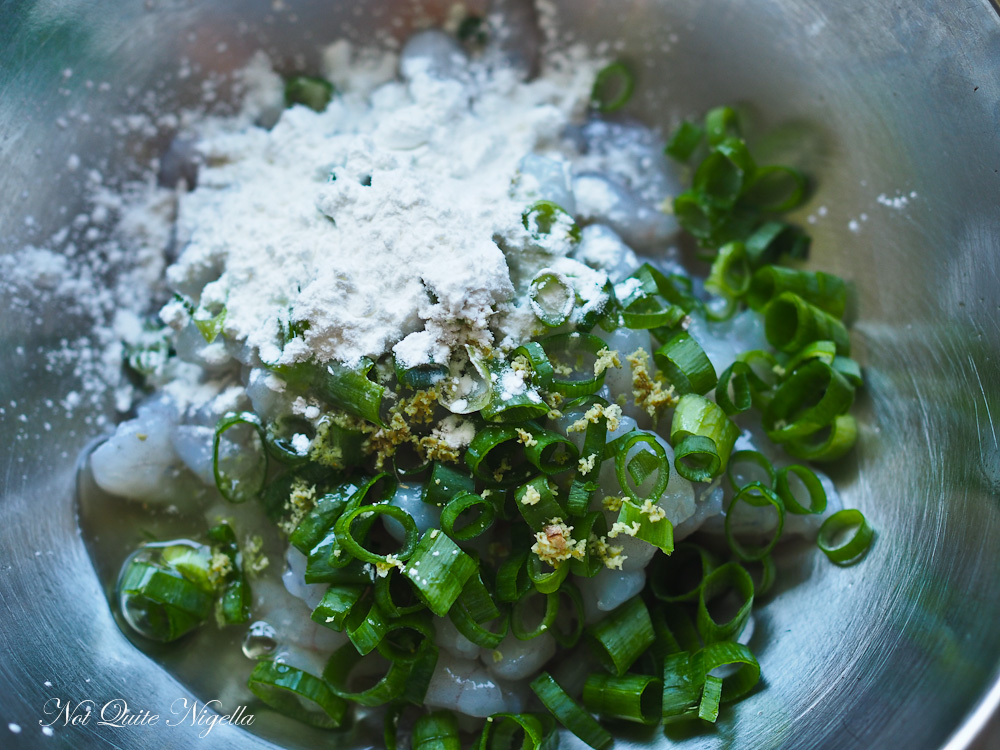 Step 2 - Place the panko breadcrumbs in a shallow bowl and set aside. Mix the spring onion, cornflour, egg white, ginger, salt and pepper and mix to combine. It should be a sticky, cohesive mix. 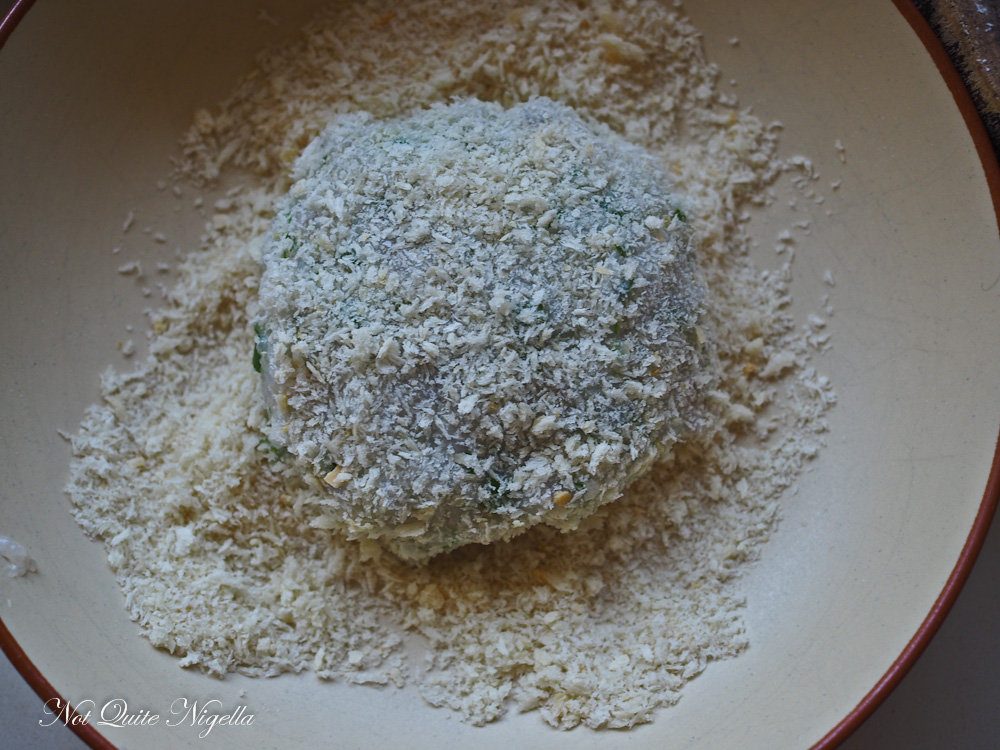 Step 3 - Gently place a mound of prawn meat in the panko breadcrumbs, around the size of the bun is ideal. Cover on all sides with the breadcrumbs and place in the fridge while the oil heats. 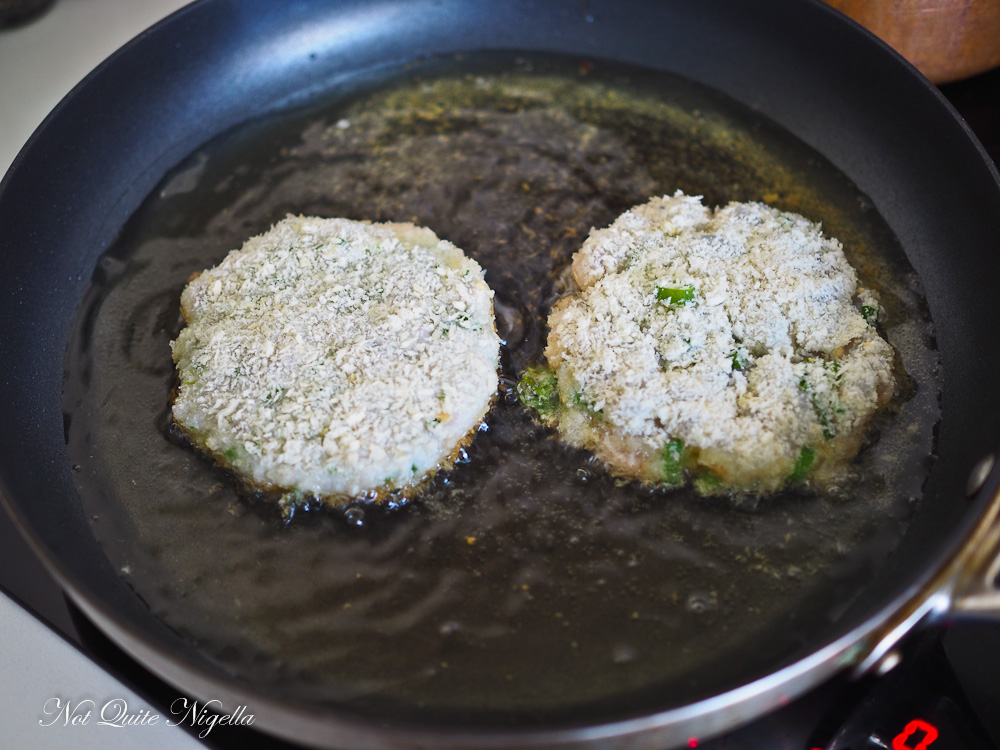 Step 4 - Heat the oil in a frypan until it reaches 180C/350F. Gently lower the patties into the oil (I used the flip to lower it down rather than my hands). Fry for about 3-4 minutes on each side until the breadcrumbs are golden. Drain on paper towels. 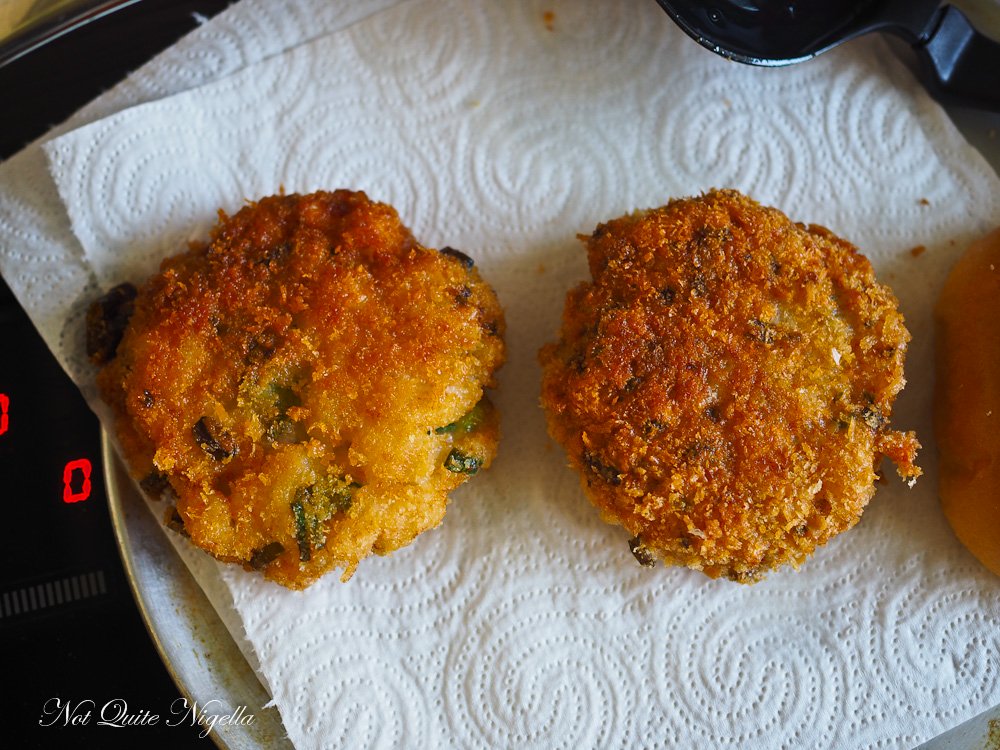 Step 5 - Place the shredded cabbage on the base, then the prawn patty and then drizzle with mayonnaise and bulldog tonkatsu sauce. 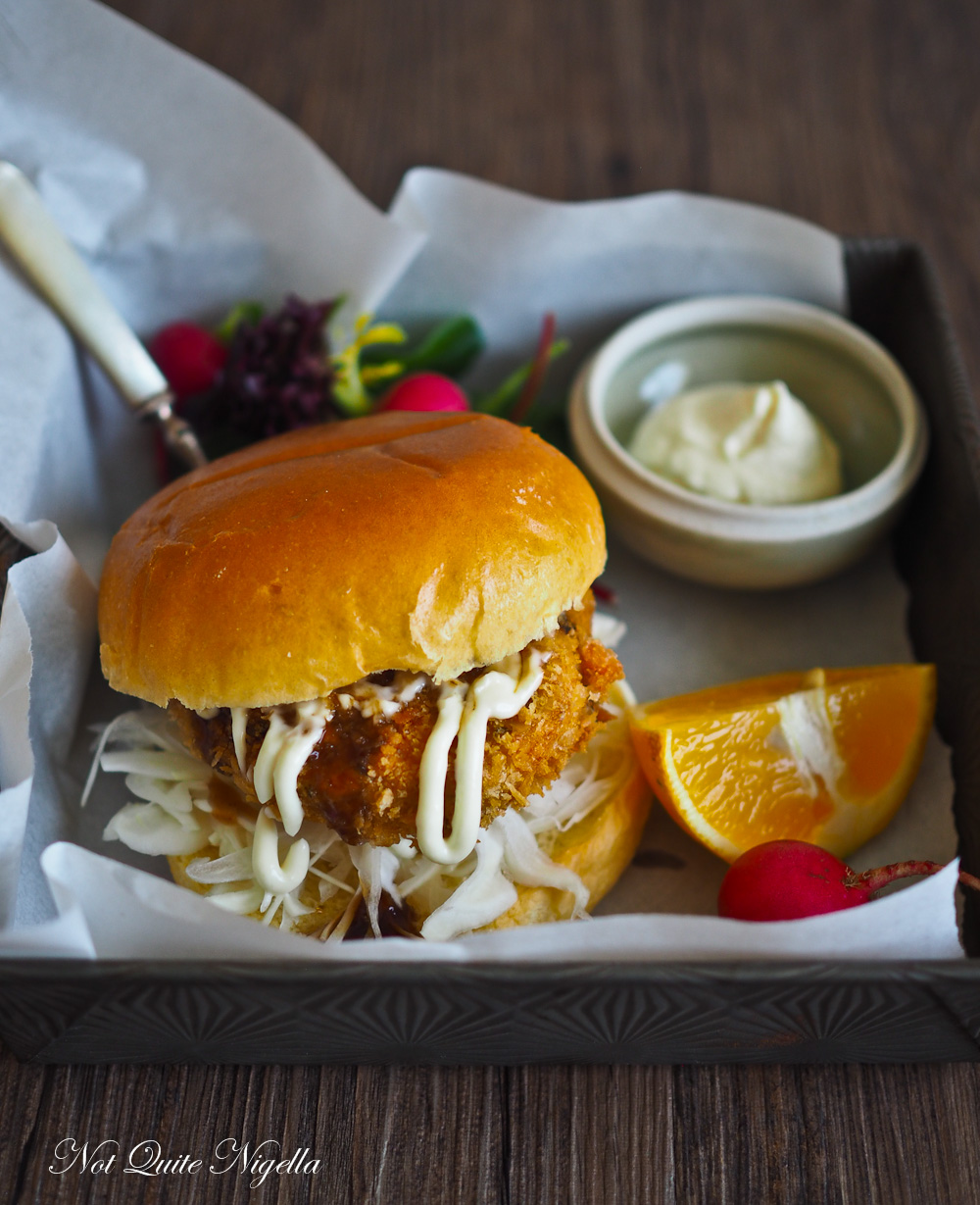