A New Year's Day Southern USA Feast! Plus the BEST Cornbread Recipe Ever! 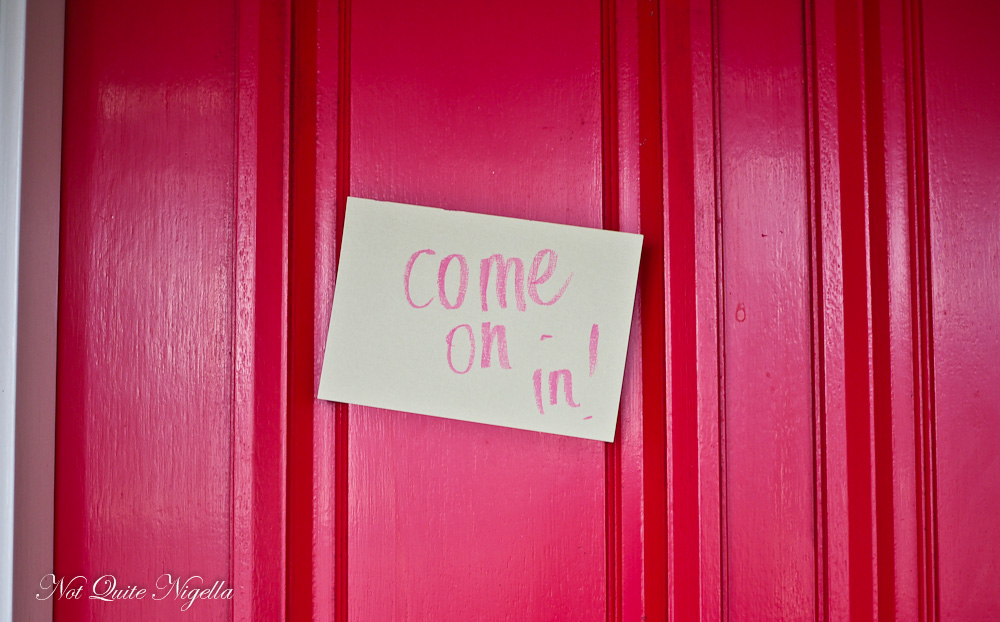 Almost every country or area in the world has its own way of ringing in the new year. Most are rooted in tradition with a healthy dose of superstition to ensure that the year goes off to a great start. For those in the Southern states of America, there are certain foods that all self respecting Southerners put on the table come New Year's Day from grits, collard greens, black eyes peas to cornbread. So what is the story behind these foods?

For Ivy Sherrill Carruth a Southern belle from Atlanta, Georgia and her husband Ryan, New Year's Day is very personal. Being Southern is such a large part of who she is from the warmth in which we greets visitors and strangers to the "Ya'lls" that pepper her drawl. 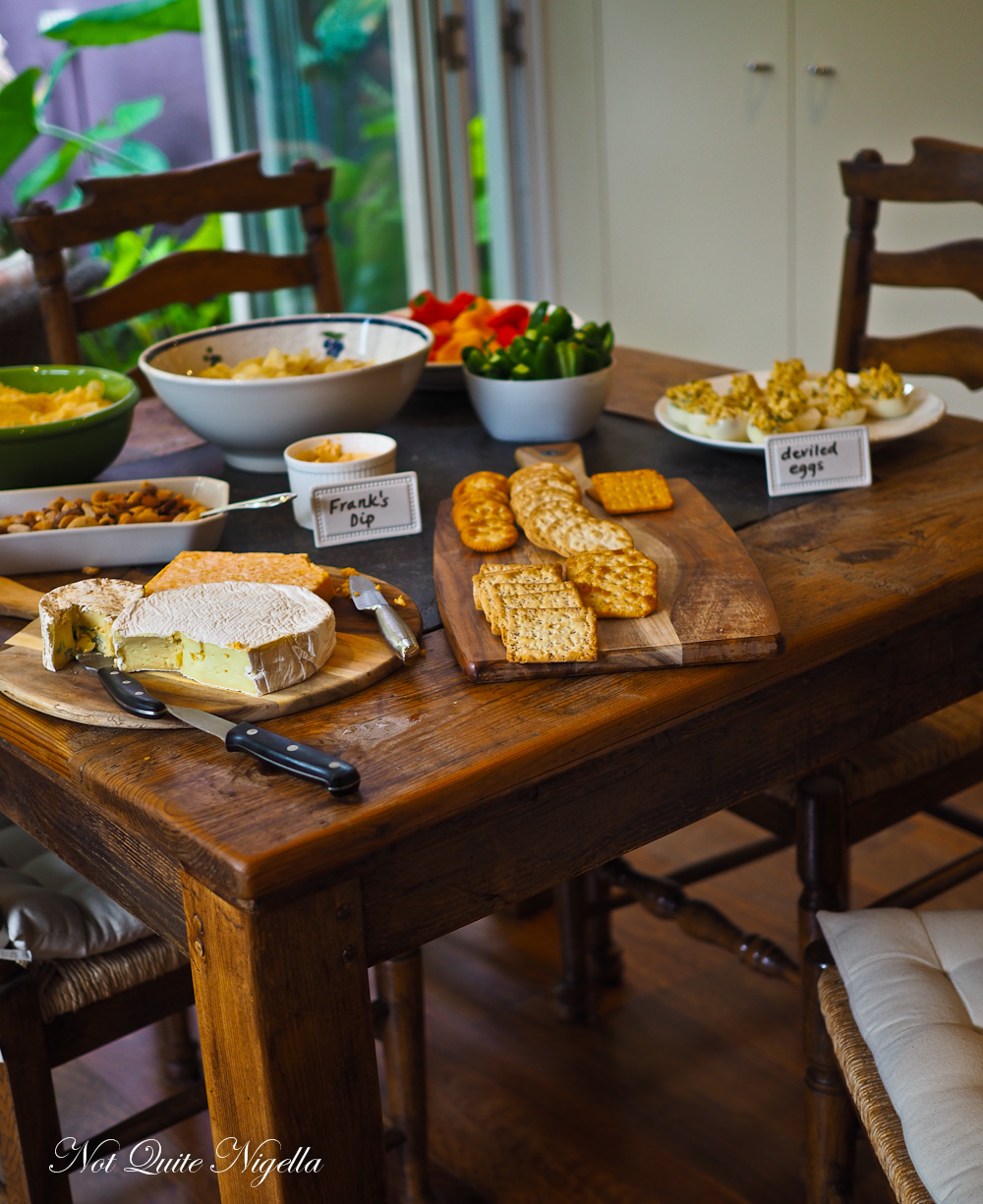 They've lived in Australia for the past 5 years and every year they invite their friends over for a "Greens and Beans" dinner on New Year's Day. The greens they speak of are collard greens, vitamin packed leafy greens that have a slight bitter flavour. Ivy explains that making collard greens from scratch is a big production and to save time she uses tinned collard greens which she cooks with ham hock. 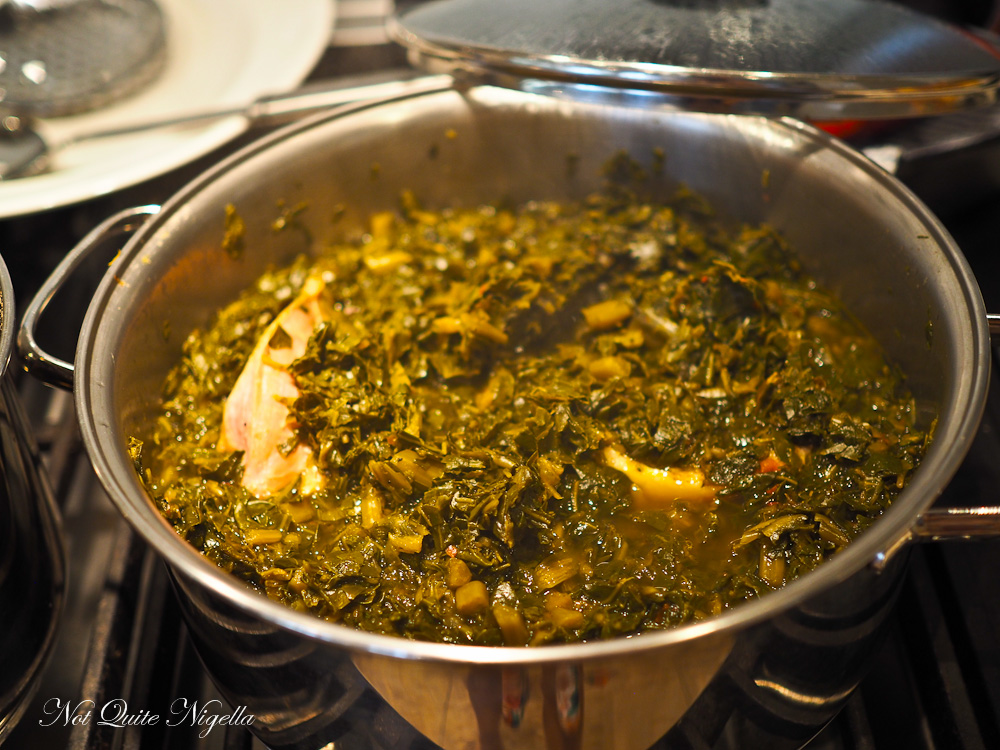 And why collard greens? Some say that it is because the colour of the greens resembles paper US currency, lining the path for the year ahead with fortune. They are also a vegetable that is in season during the New Year period. Some even use uncooked greens and tack them to the ceiling for good luck or in doorways to ward off evil spirits. 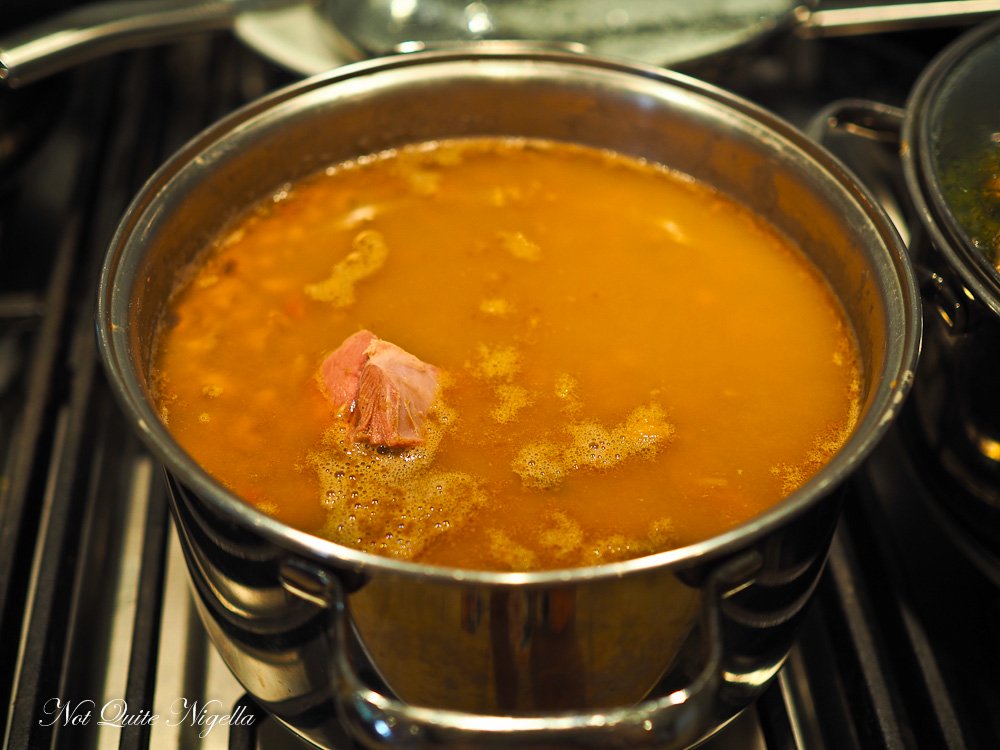 The beans in the "Greens and Beans" dinner name are black eyed peas. Here they are cooked with ham hock. Peas are good luck because they are a frugal food, starting off with limited extravagance means that fortune will surely follow and dried beans resemble coins. Ivy explains that the history of black eyed peas dates back to the Civil War when Union general William T. Sherman marched through the South. They left the fields of black eyed peas untouched as they regarded them as animal fodder. This left the humble black eyed pea as one of the main sources of sustenance for starving Confederate troops. 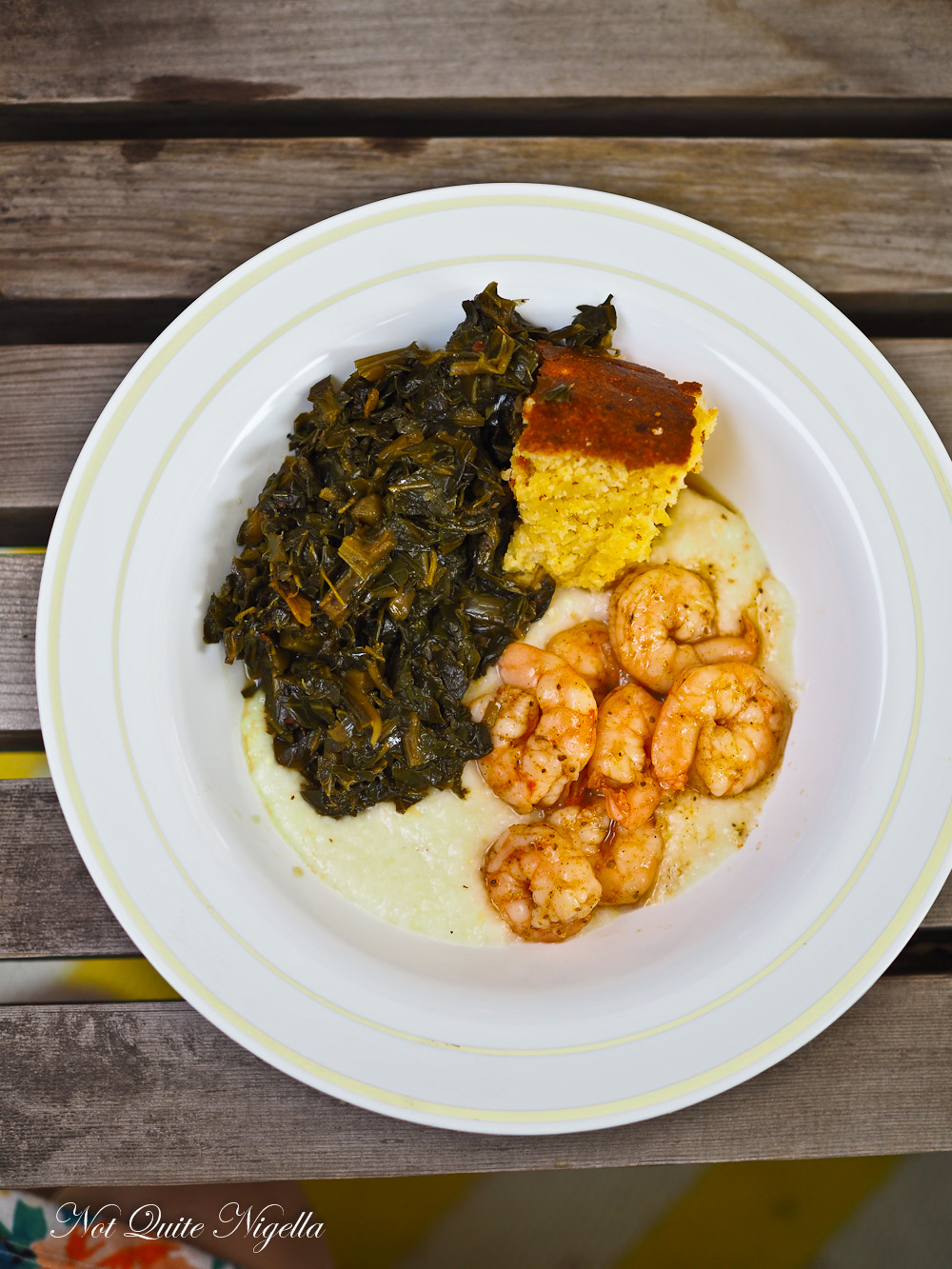 Hoppin' John is a Southern dish originally from Carolina made with black eyed peas, rice, bacon and bacon. And if eaten the day after New Year's Day Hoppin' John becomes Skippin' Jenny. Usually a coin is served in the Hoppin' John but Ivy demurs, "I don't add that in - cause gross- who who wants to eat something that's got a million germs on it? Gross." 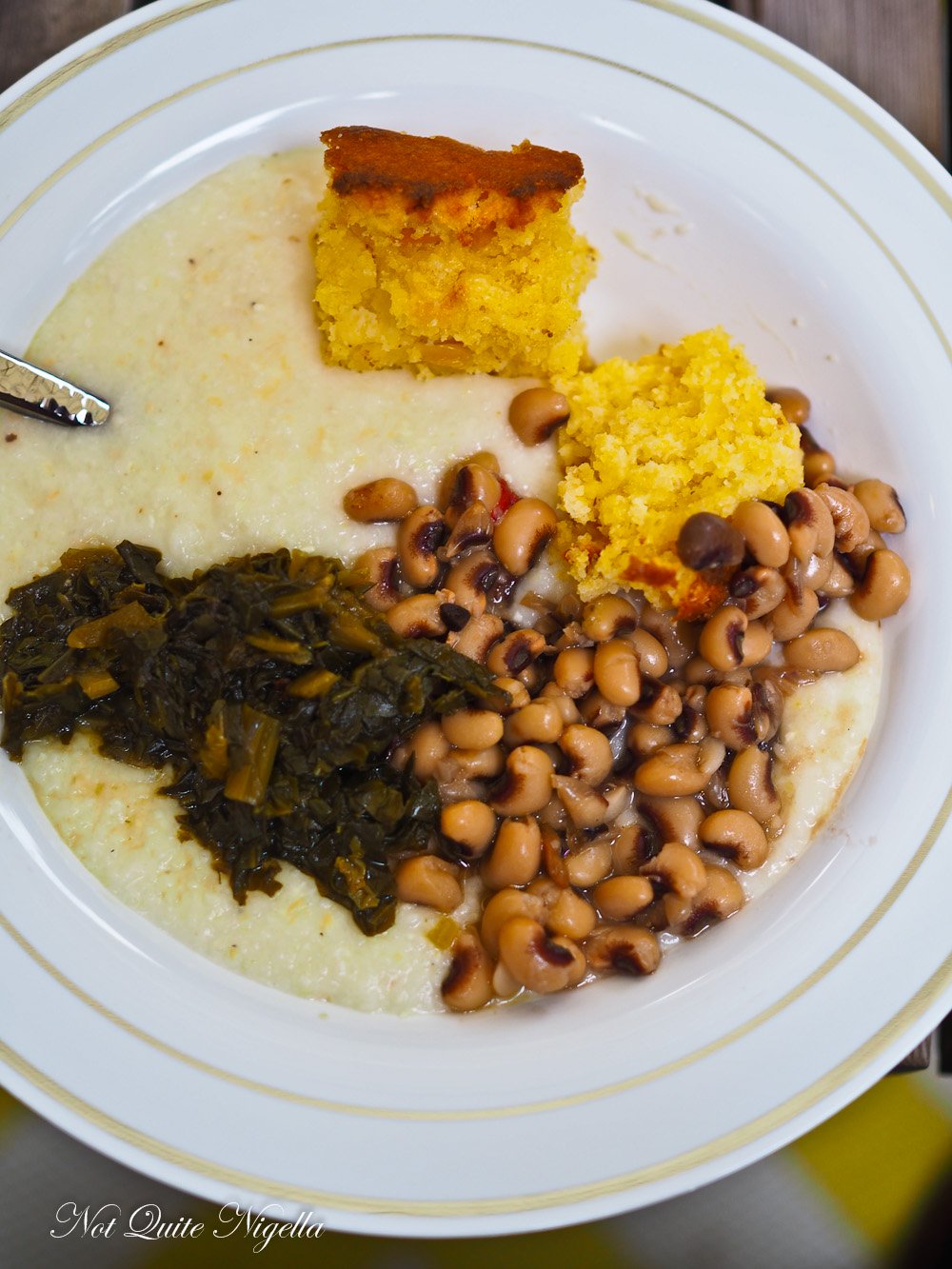 And pork is a very popular meat on new year's day. In the south they eat pork because pigs "root forward" so they are an animal of progress and their rotund shape signifies prosperity in the years ahead. 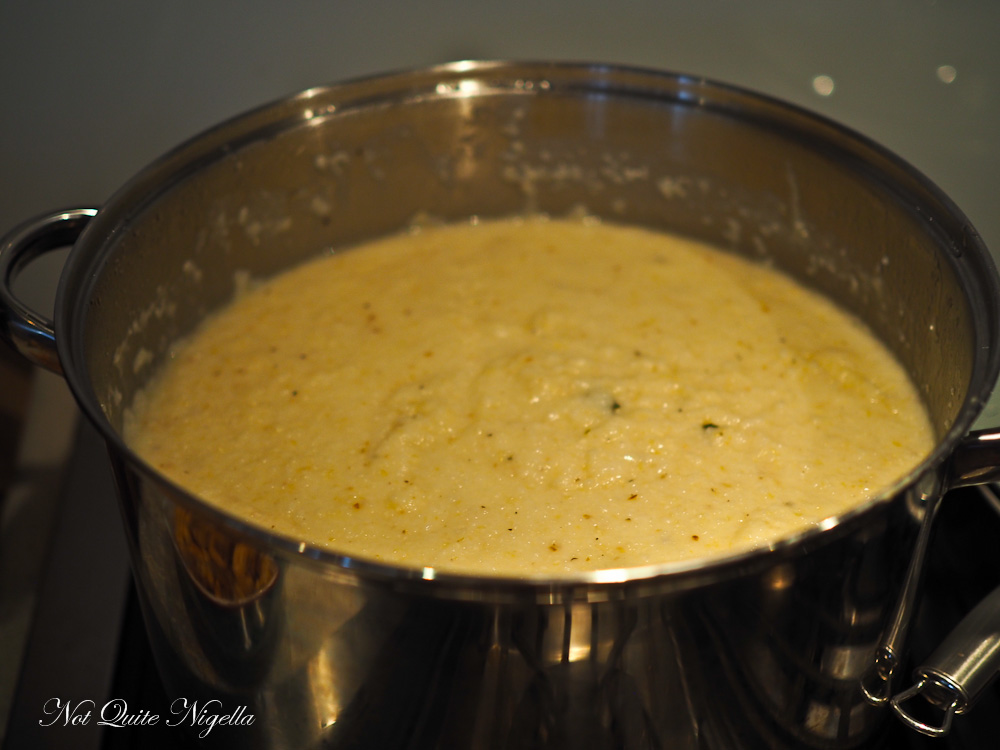 Also on Ivy and Ryan's menu are grits, soft porridge style maize kernels. The closest cousin to this available widely in Australia is polenta. Grits are usually eaten for breakfast most days in the South. They can be quite mild or bland but here Ivy flavours them with seasonings and lashings of cheese. These grits are the best I've ever had with lots of flavour. 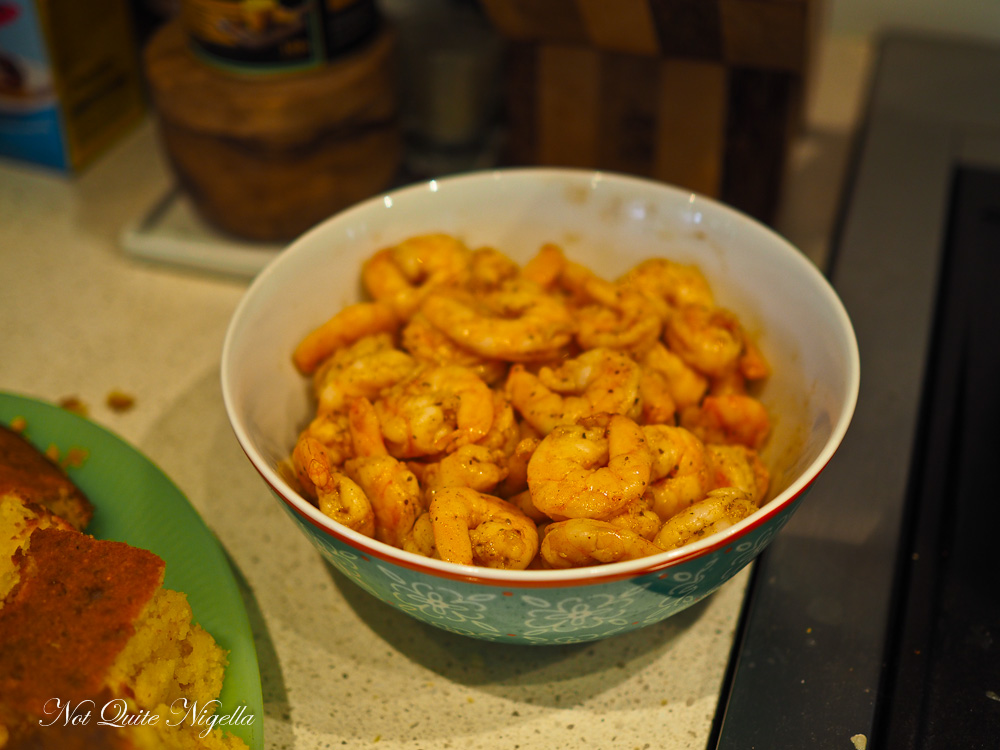 She serves them with shrimp which she invites people to pair with the grits as long as they call them, "shrimp n grits because there's no such thing as prawns n grits!". 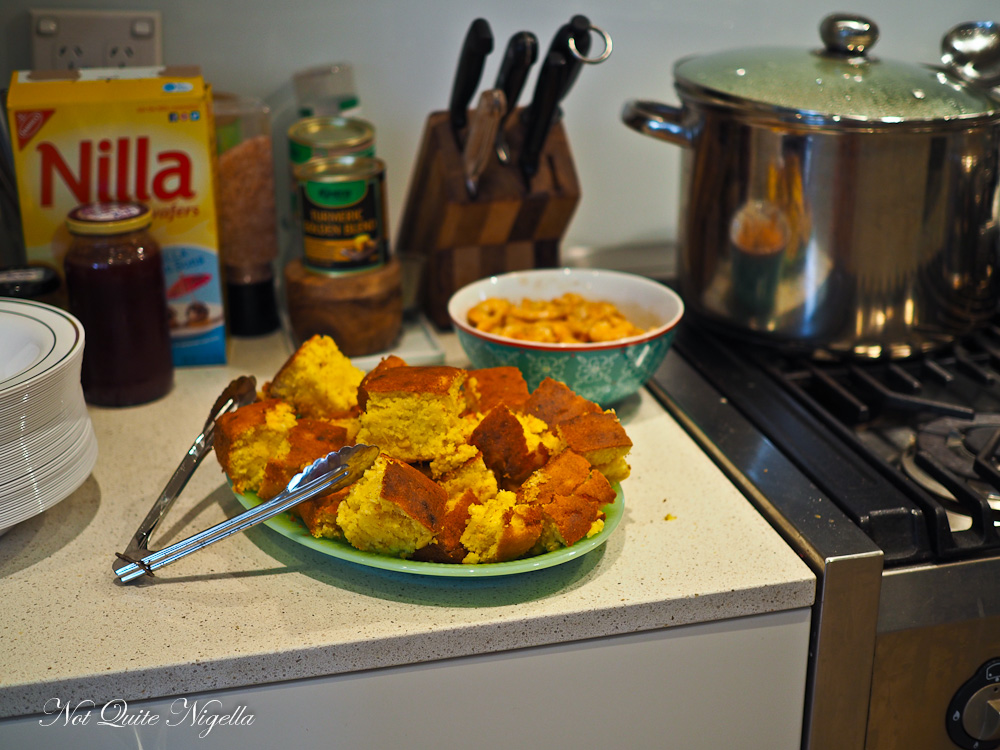 To finish off the meal is cornbread, a golden item signifying gold or pocket money. And Ivy's cornbread is a game changer. Most of the time cornbread can be dry and grainy but here it has an entirely different texture thanks to Ivy's secret ingredient-creamed corn. This also gives the cornbread additional luck as the corn kernels are said to represent gold nuggets. 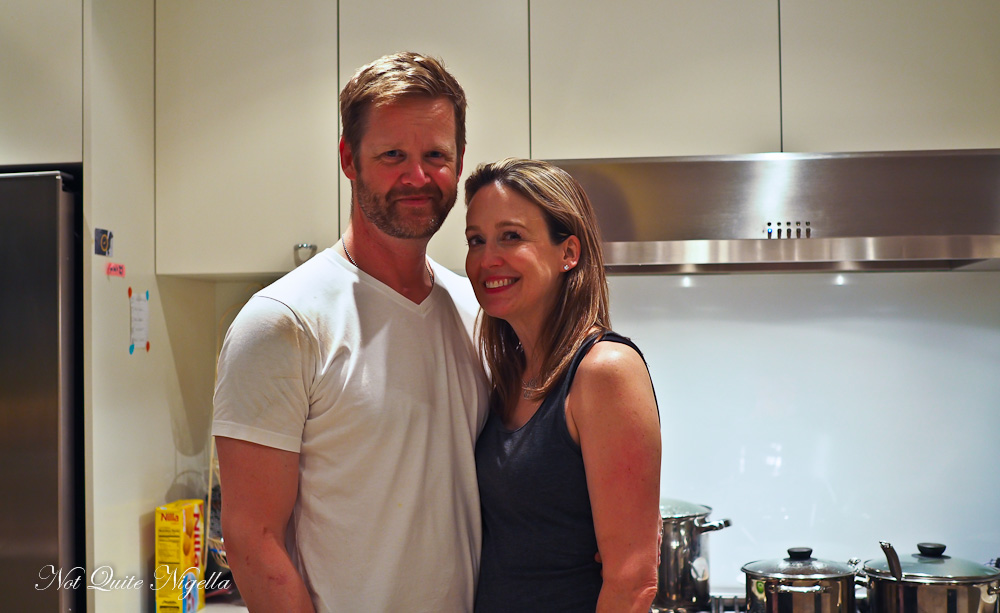 And are there any foods that's are no-no in the South in New Year's Day? "No chicken cause that's bad luck. They scratch backward," says Ivy. Because it is said to bring bad financial luck and the new year is all about looking forwards, not backwards. Makes sense to me! 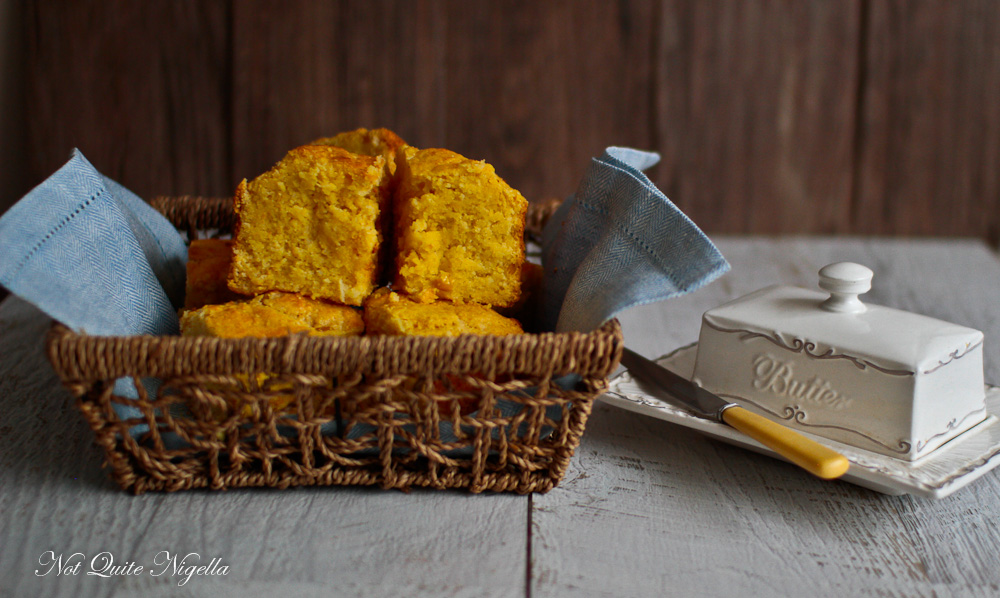 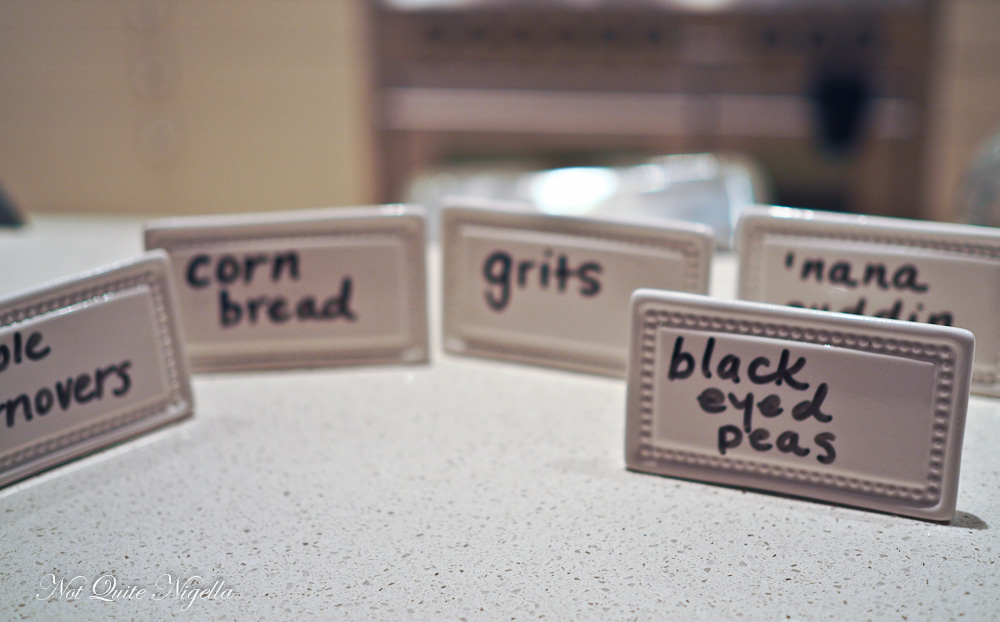 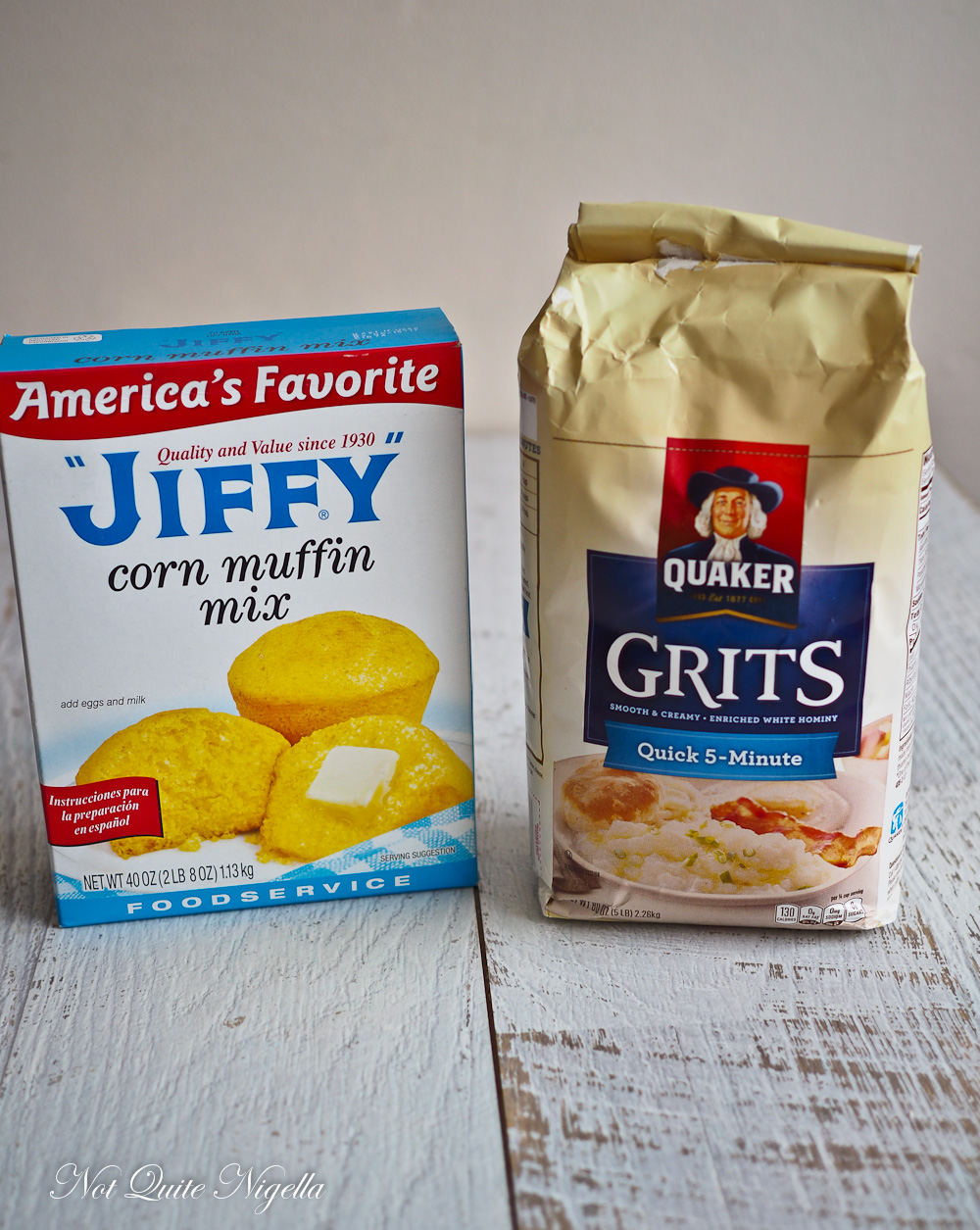 As I was leaving Ivy generously gave me a box of Jiffy corn muffin mix and a bag of Quaker grits so I had supplies to make my own. She says, "For the cornbread, it's not an exact recipe - I add things in and sort of semi measure while crossing my fingers and sending up a prayer that it all works."

You can buy the Jiffy Cornbread mix from USA Foods. Don't have access to it? Not to worry because here's a copycat recipe for "Jiffy" Cornbread mix! 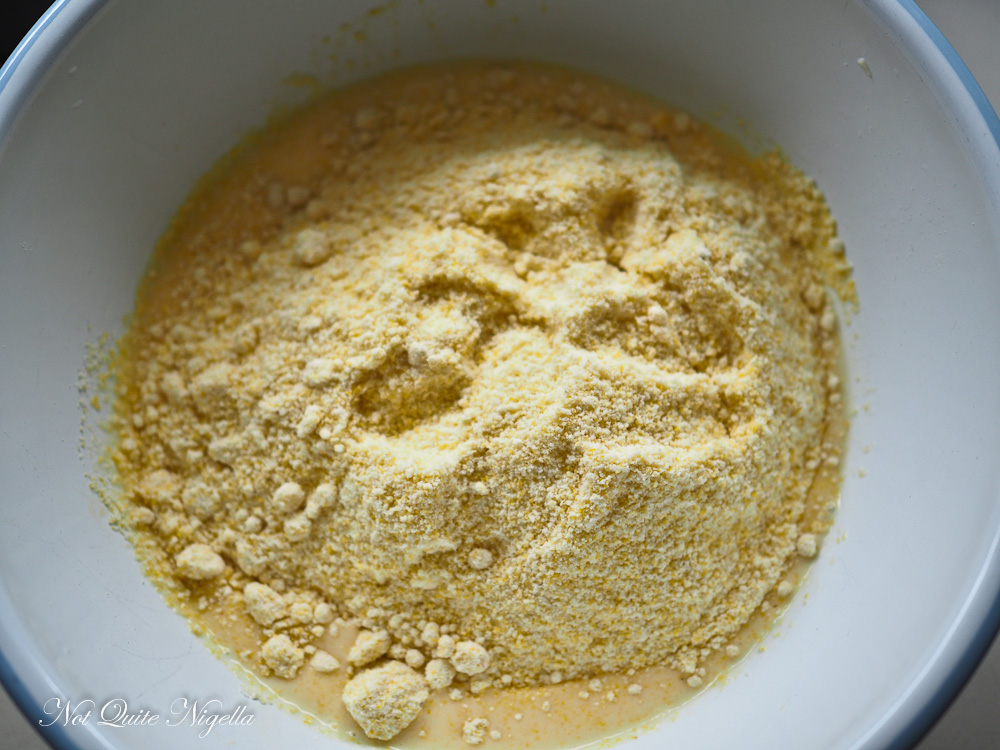 Step 1 - Preheat oven to 220C/428F. Grease a glass baking tray well with butter-I didn't have one so I used a 20x20cm/8x8inch metal tray and lined it with parchment. In a large bowl add the eggs and milk and whisk until combined. Then add the cornbread mix and stir with a spatula and then add in the creamed corn, cheese and honey (and chillies if using). Scoop into the prepared tin. 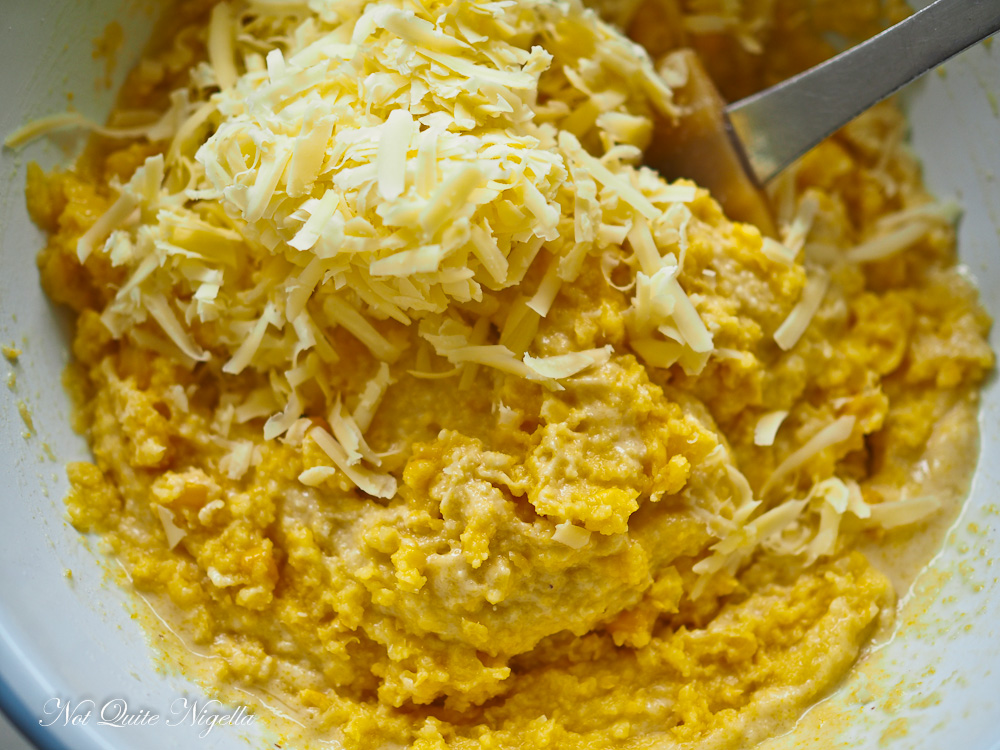 Step 2 - Bake for 10 minutes on 220C/428F and then knock the heat back to 200C/400F and bake for another 40-50 minutes until a skewer inserted comes out clean. Cover with foil halfway through if the cornbread is getting a bit too brown. Cool in the tray and cut into squares. 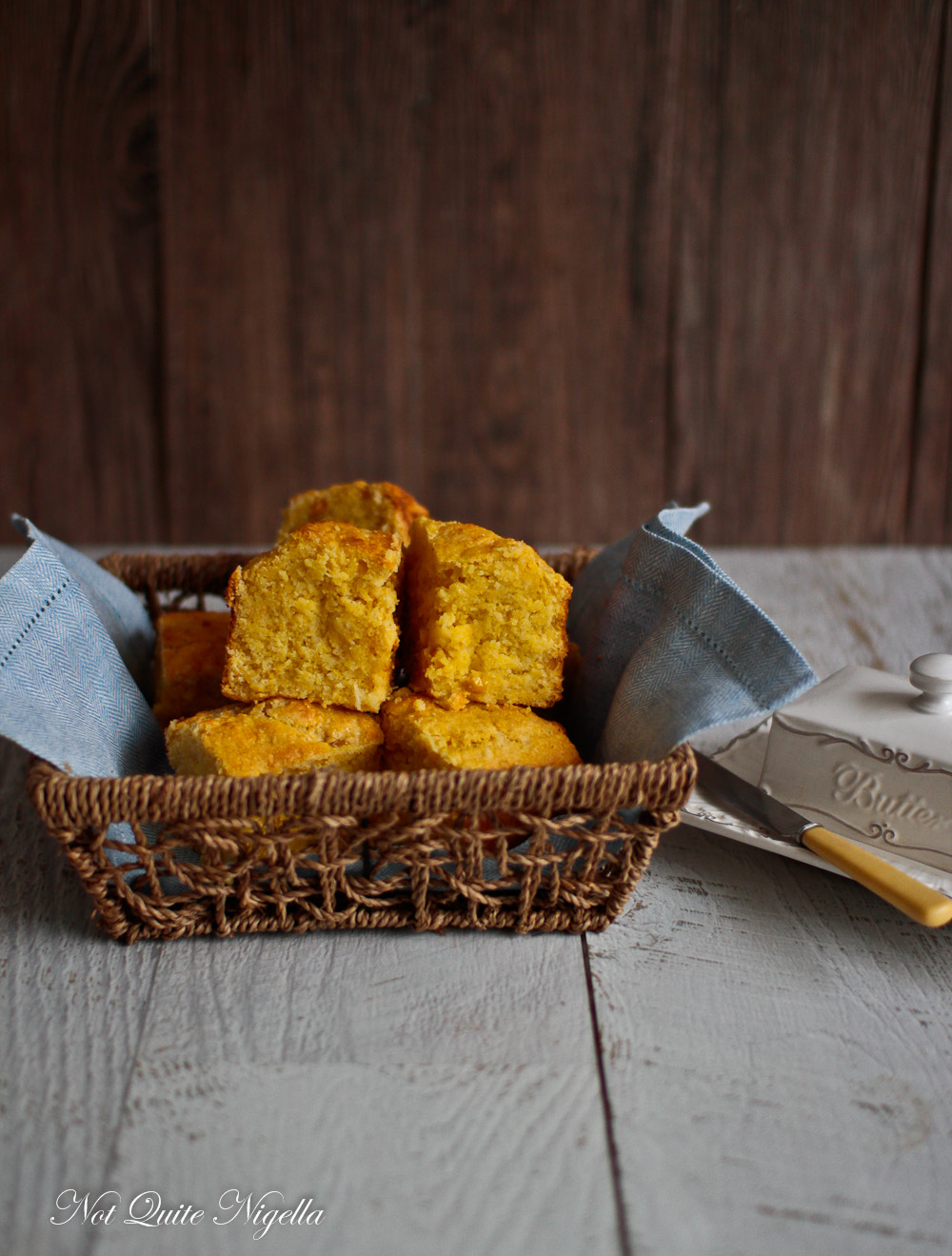