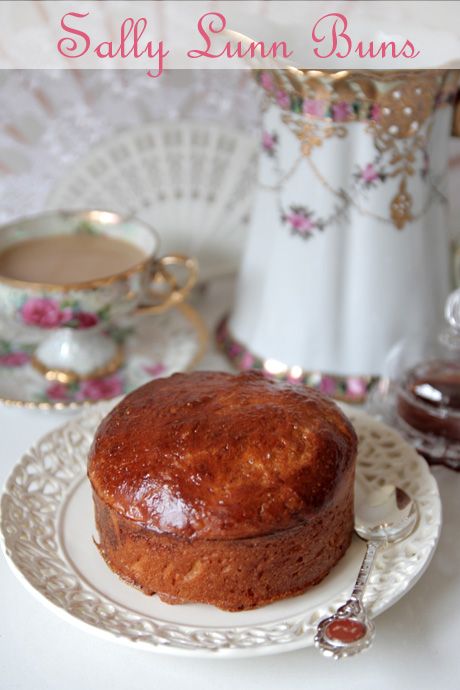 Let me tell you about a member of our little family. Our car Elphaba is a naughty racing green coloured creature that often likes to act up. She prefers it when I drive her to Mr NQN because as a half Finn, he drives cars like he is a rally car driver. I, with my newly acquired license (yes I will eventually shut up about this ;) ) am a bit gentler on her.  She has been to the mechanic about twenty times and he and her creator Peugeot are completely baffled as to what is wrong with her. So she has been christened Elphaba after the Wicked character because a) she is green and b) she is very misunderstood!

Since she is taking her 21st trip to the mechanics this week Mr NQN has had to do the grocery shopping on his bike. However things such as bread don't fare so well in a backpack and end up crushed (gleaned from first hand experience extracting a squashed loaf of bread) so I thought what better time to make some bread that I've been dying to make for ages. The famous Sally Lunn buns. 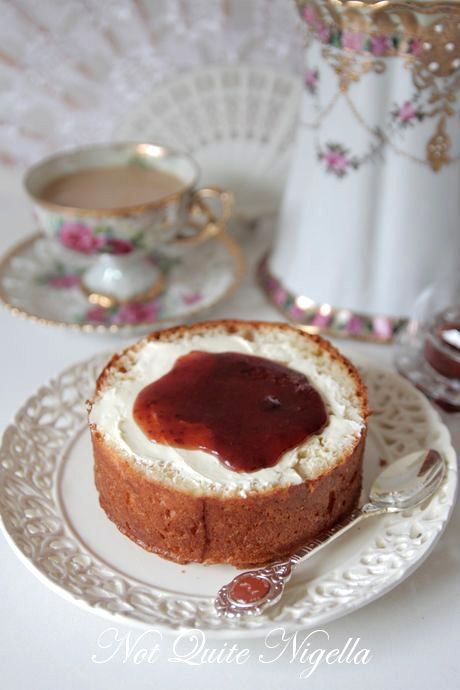 What are Sally Lunn buns? I first heard of these from my friend Queen Viv. She had visited the area of Bath in England last year and tried one of the Sally Lunn buns and they were a vivid memory for her. They're one of the most well known items in the area and are the creation of a French Huguenot immigrant called Solange Luyon whose name was anglicised to Sally Lunn. She fled from persecution in France to the city of Bath in 1680. Her buns are a brioche type of confection-light, airy and buttery and have been mentioned in books by Charles Dickens and William Makepeace Thackeray. But apparently Jane Austen was not a fan of these buns claiming that they had upset her stomach. Too much butter perhaps? No such thing! ;)

Like many historical items, there is controversy at eateries calling these menu items Bath Buns but instead selling stodgy overly sweet buns. You see the buns are used as "trenchers" or plates which meant that they are largeish and they are covered in savoury spreads or toppings like Welsh Rarebit. They're also known as great hamburger buns too.  Today only six people know the actual recipe that Sally Lunn used. It was  discovered in the 1930s in a hidden cupboard over one of the fireplaces in the kitchen. These four are of course sworn to secrecy about the recipe. 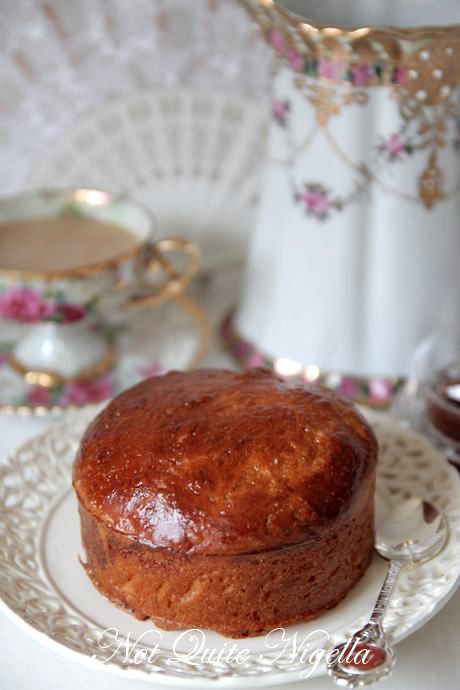 The version that I've made was borne of experimentation and picking bits and pieces from various recipes and brioche recipes. I consider these a simpler, less troublesome cousin of the brioche. It is rich, buttery and light and like they say the best Sally Lunn buns are, good with either sweet or savoury toppings. I was reminded of the Sally Lunn buns when I saw them on Fiona's lovely site NutsAboutFoodItaly and promptly wrote it down on my to bake list. They were much easier to make than brioche yet still had that lovely butteriness and a hint of sweetness. The texture was airy and light and spongey and we used them with both sweet and savoury toppings.

And if you're like me and feel the slightly chilly whisper of autumn coming, the idea of baking bread to warm the house and fill it with a buttery, freshly baked aroma is too hard to resist. I say when cold, bake!

So tell me Dear Reader, what foods are you looking forward to in autumn (or spring if you are in the northern hemisphere!) 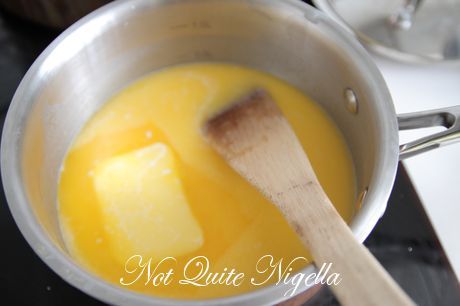 OK you didn't really need a picture of butter melting in milk did you? ;)

Step 1 - In a small saucepan, heat the milk and melt the butter on low heat until the butter melts but do not boil the milk. Cool for about 15 minutes. Beat the eggs in a bowl with a whisk until light and fluffy. 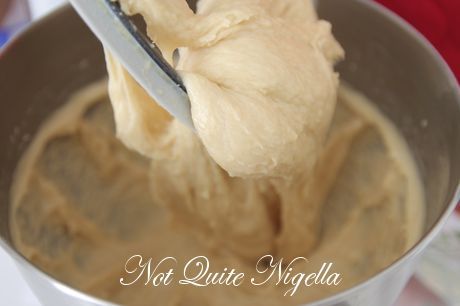 Step 2 - Meanwhile mix the flour, sugar and yeast  in the bowl of an electric mixer fitted with a dough hook. While mixing on the lowest speed add the butter mixture and then the eggs and mix for 6 minutes until it becomes elastic. In the last minute or so add the salt. It will be a wet and sticky mixture but don't fret, it is meant to be like that! 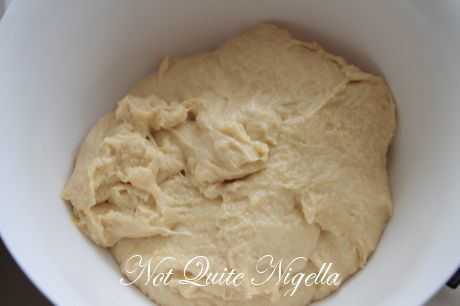 The dough when first placed in bowl to rise 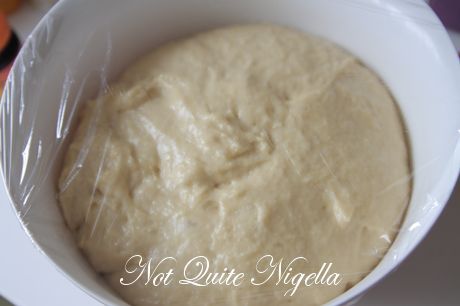 After half an hour rising 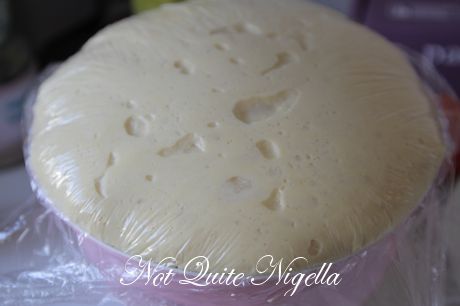 Oops I should have used a bigger bowl! This one is alive and breaking out of the plastic! 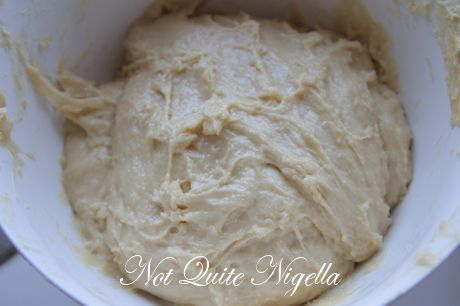 Step 3 - Grease a very large bowl with butter and place the now very sticky dough in the bowl and cover with cling film. Allow to rise for 1 hour to 90 minutes in a warm space in a draught free room. It will really rise up high! Punch it down and knead the dough for 2 minutes. 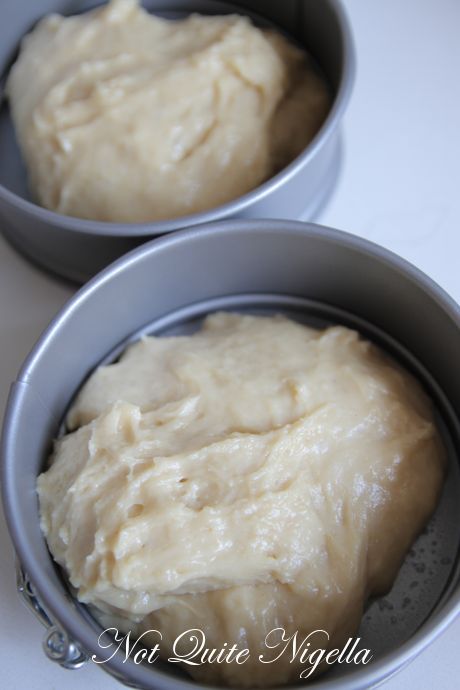 Step 4 - I made these using greased 12cm baking tins as they looked neater that way. You can make these free form and they will spread out more but won't quite get the hamburger bun shape. Divide the into about 10-12 buns and allow to rise for another 30 minutes. 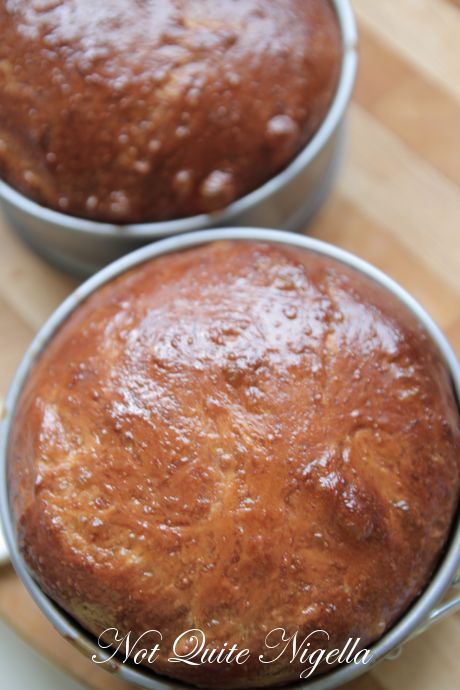 Step 5 - Preheat oven to 190C/380F. Just before they are ready, brush buns with the egg glaze and bake in oven for 15-20 minutes. Serve warm or toasted with just about anything! 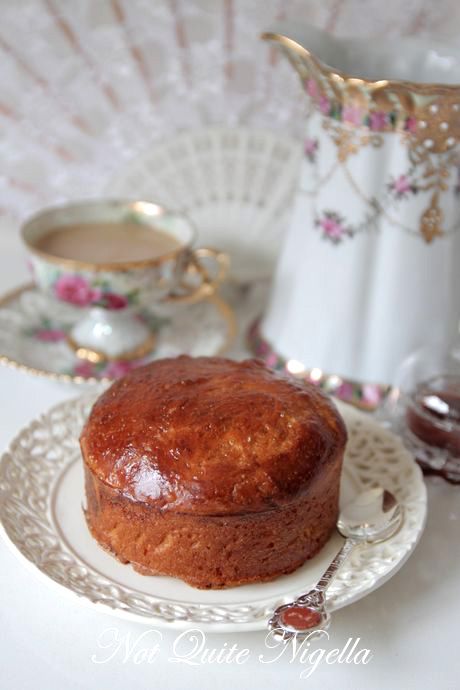