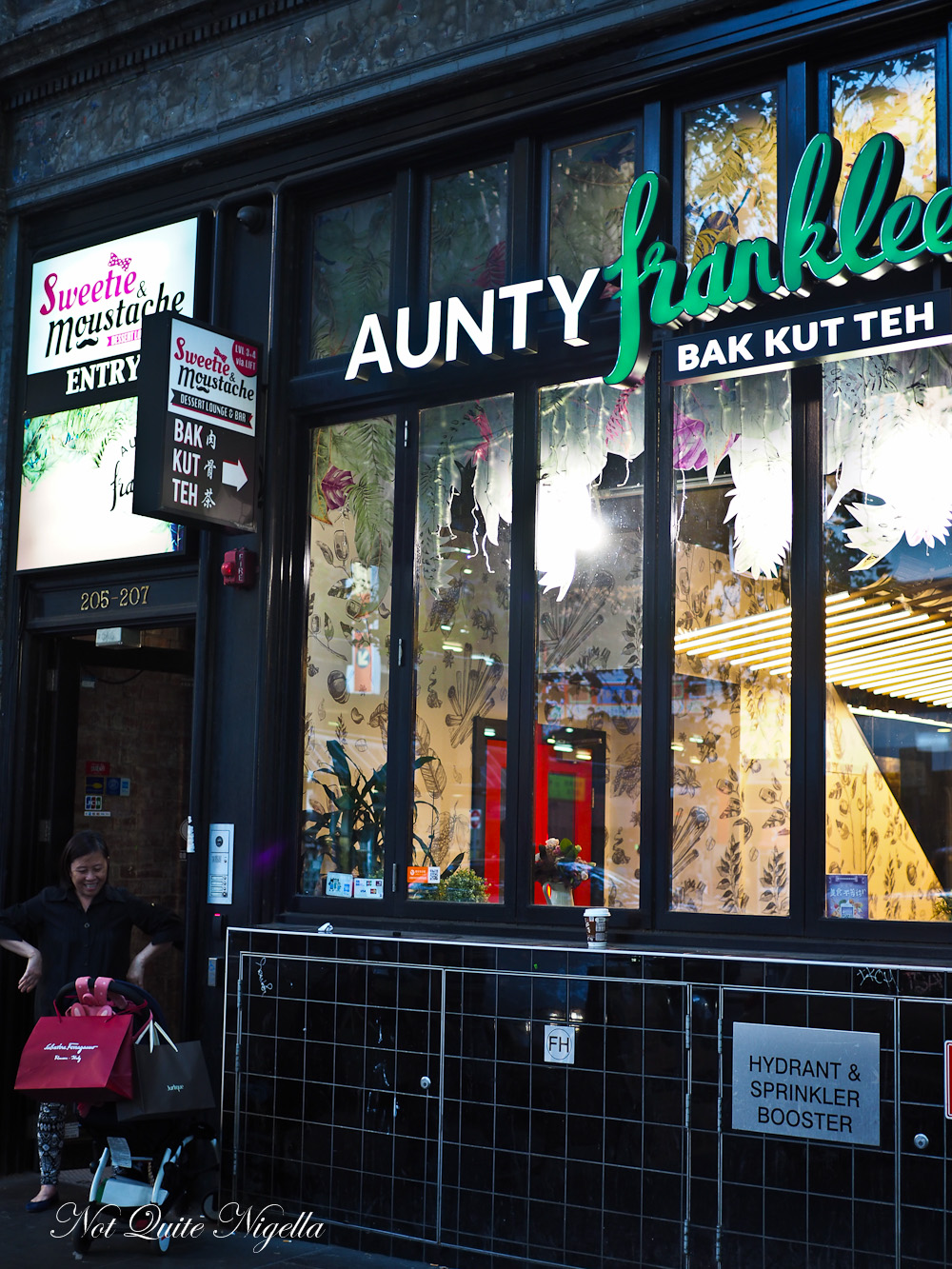 There's this thing that happens when you travel. It starts with a scratchy throat, then the air conditioning irritates and changing weather plays havoc on your system. And in cases like that, nothing beats a homemade remedy, like a slow cooked broth. Enter Aunty Franklee and her Bak Kut Teh soup. 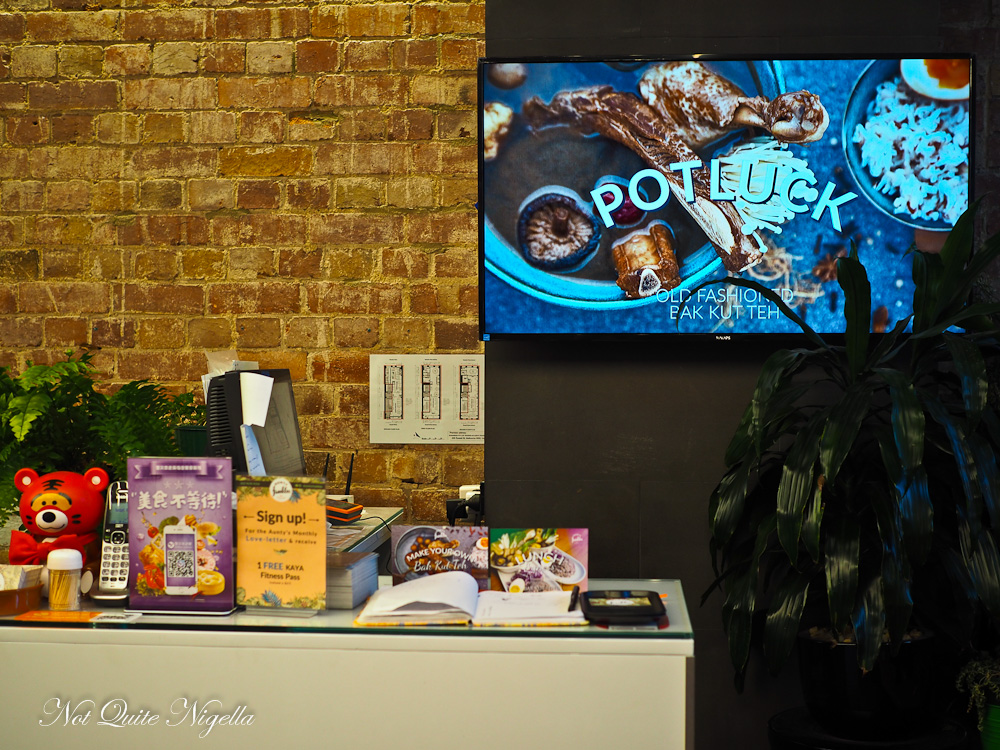 Mr NQN was feeling a bit poorly when he arrived in Melbourne the day before which accounted for his extended sleep in that morning. "Don't worry, tonight you're going to have soup! Malaysian bone broth!" I said and he visibly lit up. 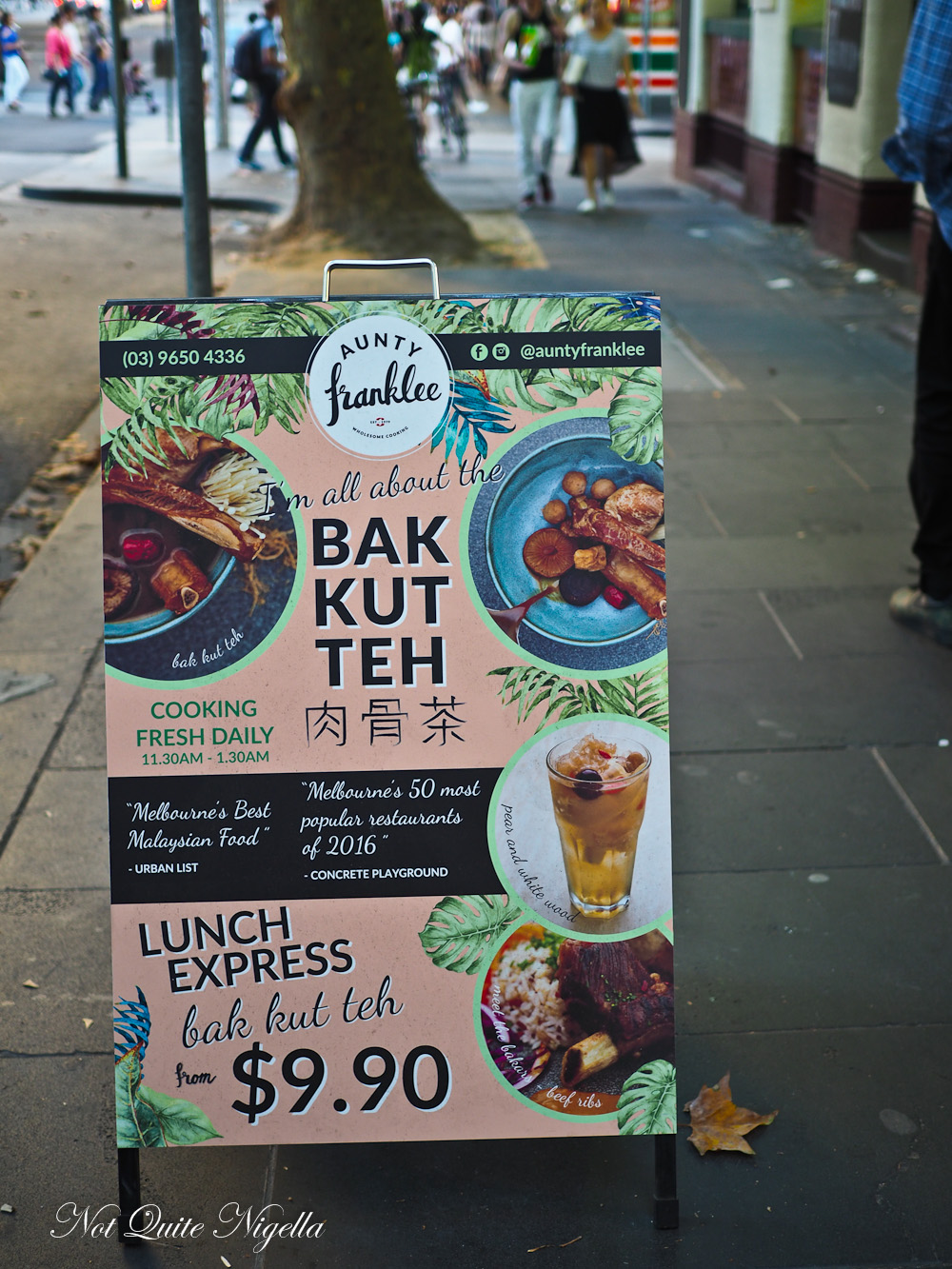 Aunty Franklee is on Russell Street in Melbourne's Chinatown area. The name Frank came together when the Lee family put all the first name initials together to spell Frank. Aunty was added to emphasise the wholesome family style nature of the menu. It was originally called Sugar Bun but the menu has morphed slightly. 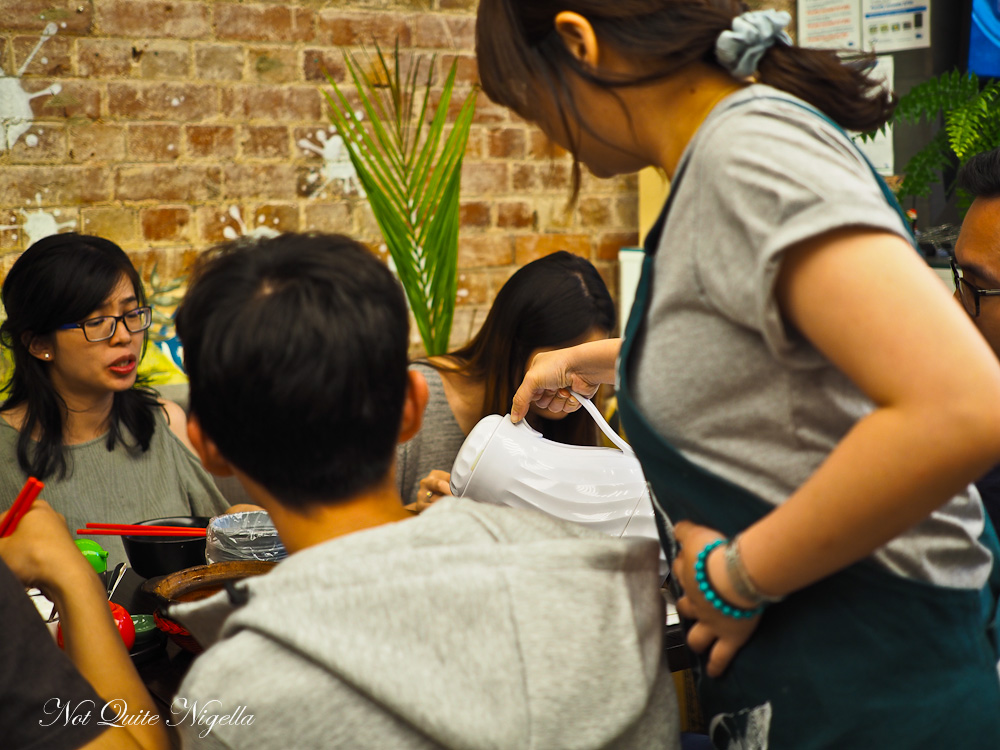 Topping up the soup

In case one was wondering what the specialty is, the signs spell it out. They read, "I'm All About The Bak Kut Teh". Bak Kut Teh is a Malaysian/Singaporean soup that translates to "bone meat tea". It's slightly herbal or medicinal in nature and reminds me of the Chinese medicine that my parents used to boil up but it's not a hard swallow at all. Much the opposite as it straddles the line between heart warming bone broth to medicine. The soup itself takes about 10 hours to make as they layer it first with bones (pork and chicken) and then meats. Time extracts all the goodness and marrow from the bones. The soup is made very day fresh. And there is a soup version and a dry version of Bak Ku Teh on the menu and customers get free top ups of the soup. 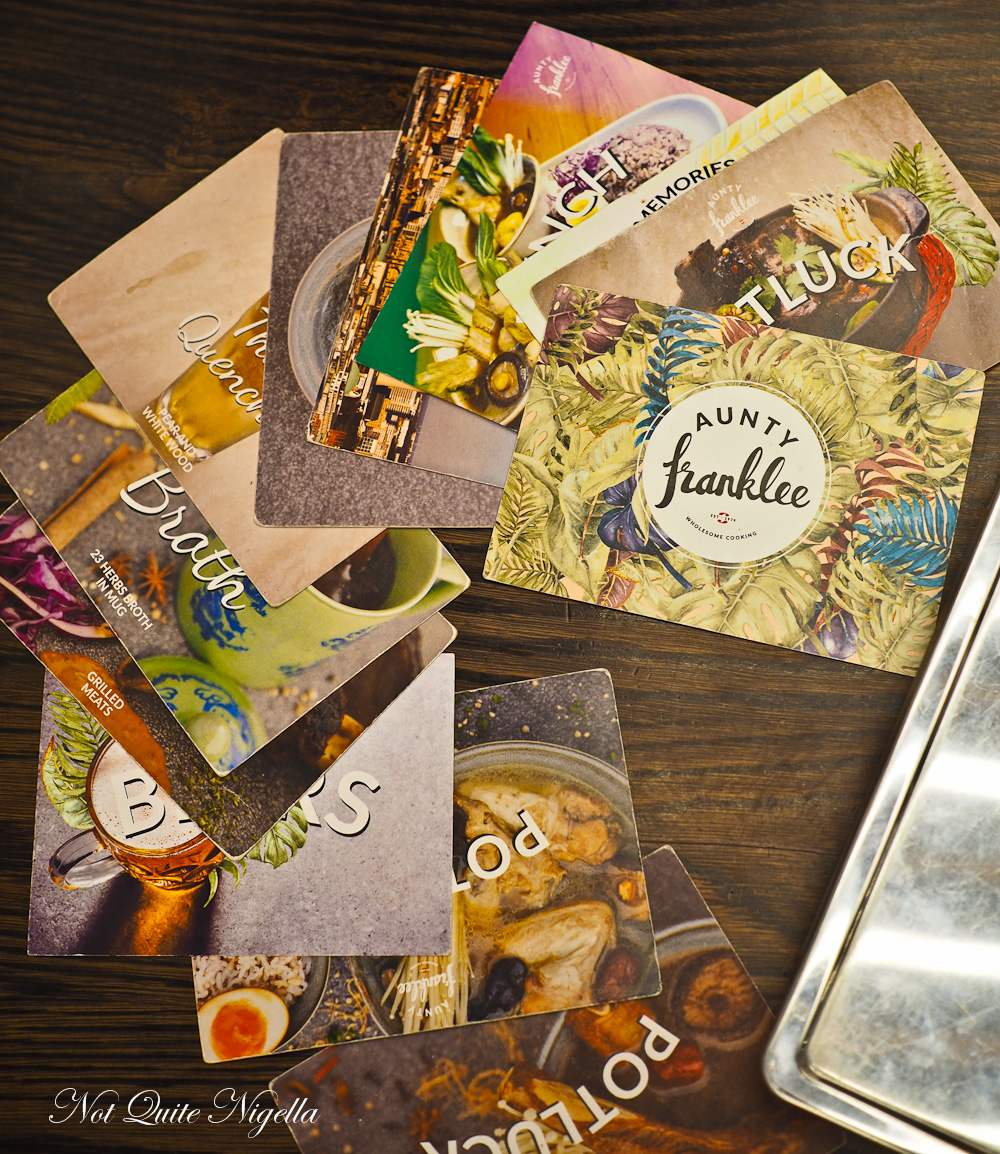 Service is very friendly and welcoming and we notice that Mr NQN is the only Caucasian customer this evening. Everyone else is Asian - young groups, young families etc. It's a nicely outfitted space with a large wall mural and our friendly waitress opens a tin box and spreads out a deck of postcards. This is the menu. 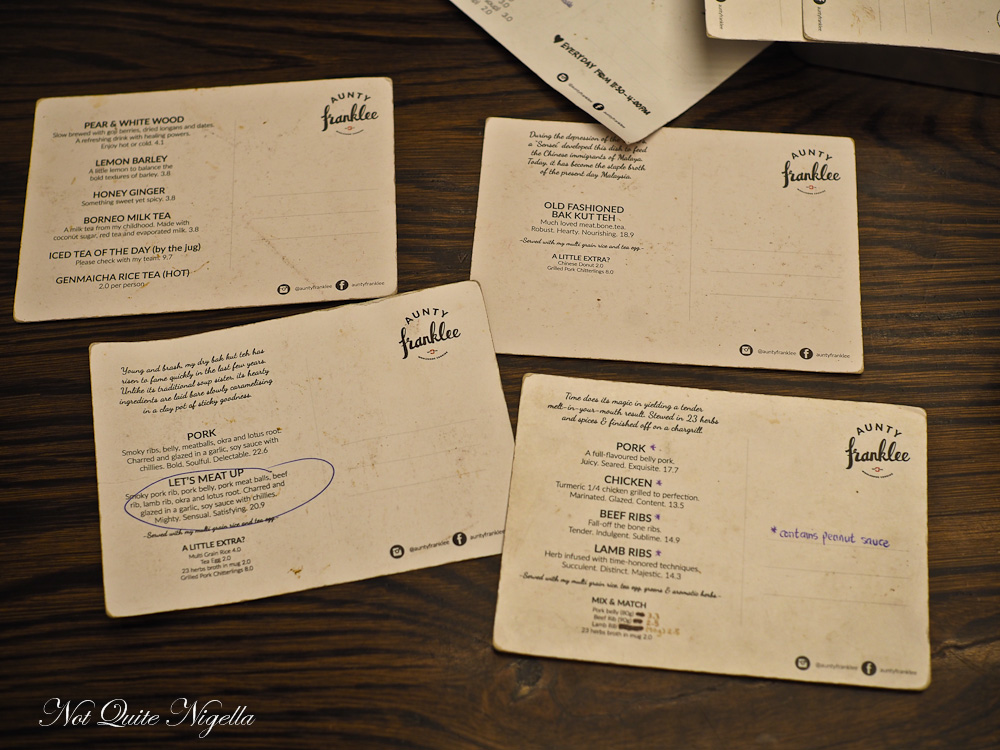 We ask for recommendations and she is very sweet and takes her time to explain things even pointing Mr NQN in the direction of a grilled meat dish "I think you'll like that," she says smiling, not unkindly at all but I think she assumed that Caucasian men like grilled meat because they probably love barbecuing (that couldn't be further from the truth no matter how many times I push him towards the barbecue). 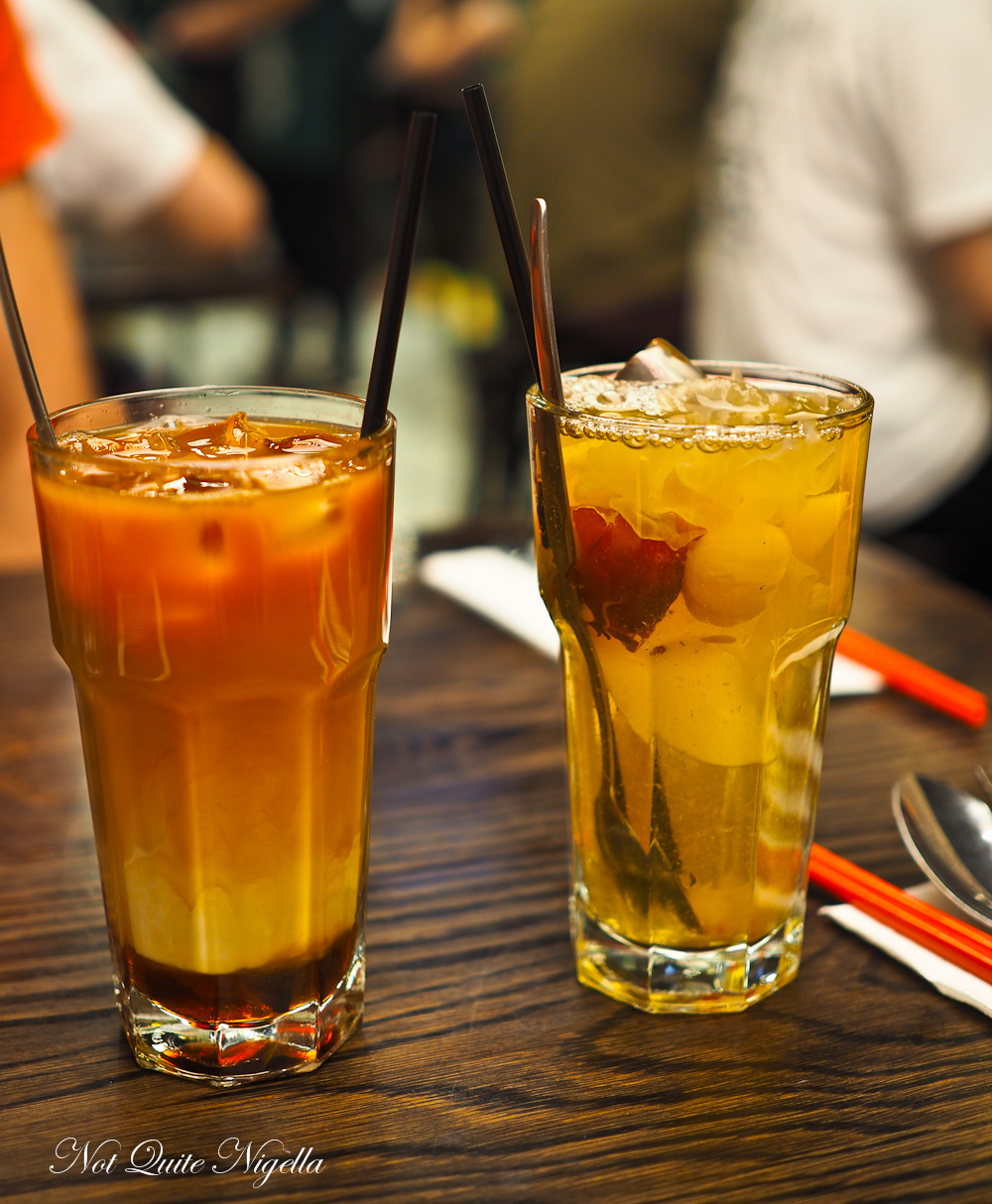 We order two drinks: a Borneo milk tea, like a slightly less sweet version of a Thai iced milk tea made with coconut sugar, red tea and evaporated milk that you stir before you drink it. There's also a pear and white wood drink with white wood ear fungus (it's delicious, fungus is delicious guys!), red dates, longans and goji berries with a sweet, refreshing quality to it. 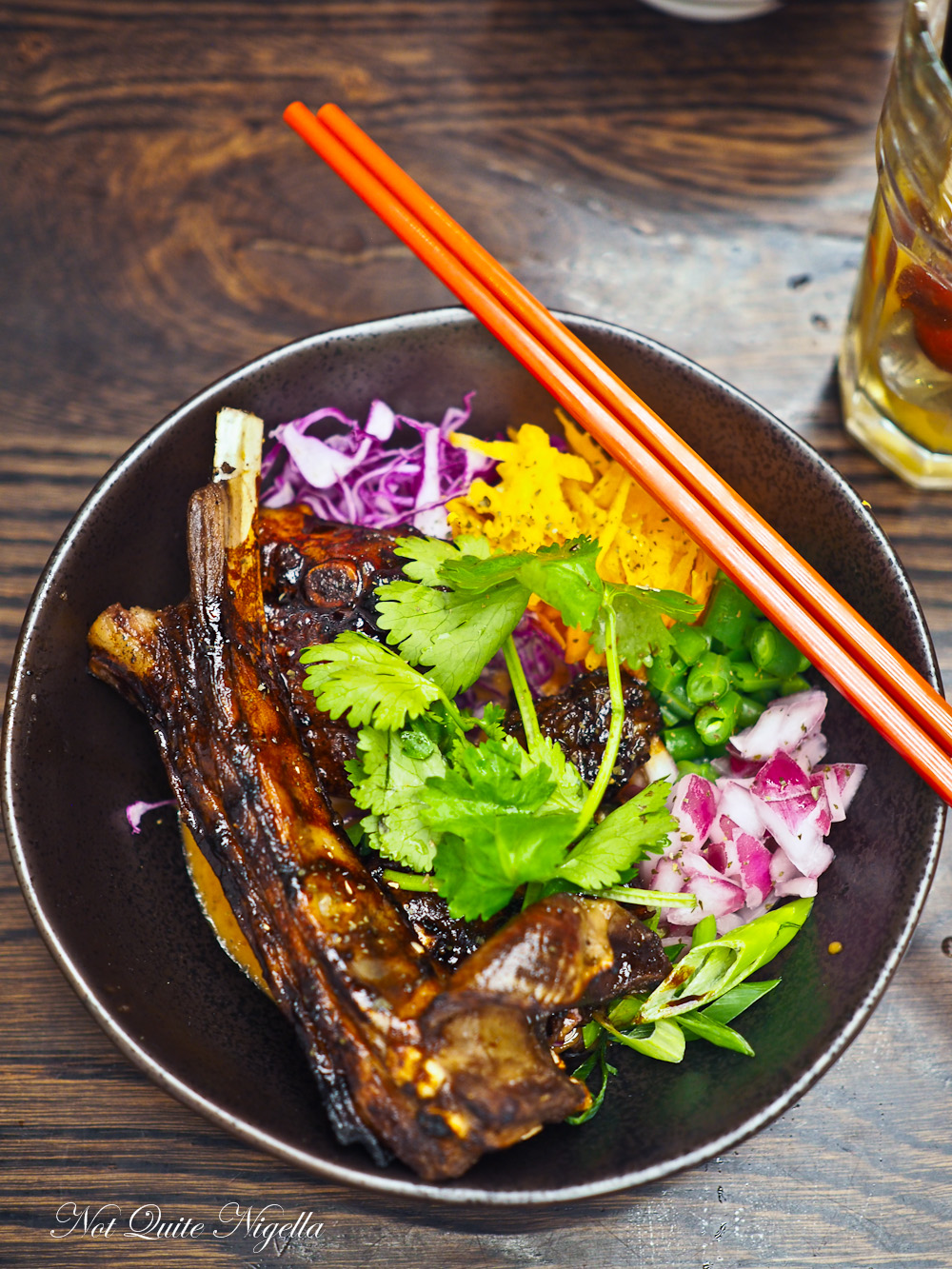 There are essentially five savoury dishes on offer and each one is flexible to a degree. Take the grilled pork, beef and lamb - you can get a bowl of it with salad and peanut sauce or you can order them by the piece. In the interests of maximum sampling we order all three. They sit atop a fresh chopped salad on a layer of creamy peanut sauce. We're instructed to toss everything together and while difficult to share, especially using chopsticks it's so moreish. The meat has a lovely char and luscious juiciness while the salad gives it much needed freshness and peanut sauce is always going to make something better. It also comes with a bowl of a fantastic mixed grain rice with red, brown and black rice, mixed quinoa, jasmine rice and half a tea egg. 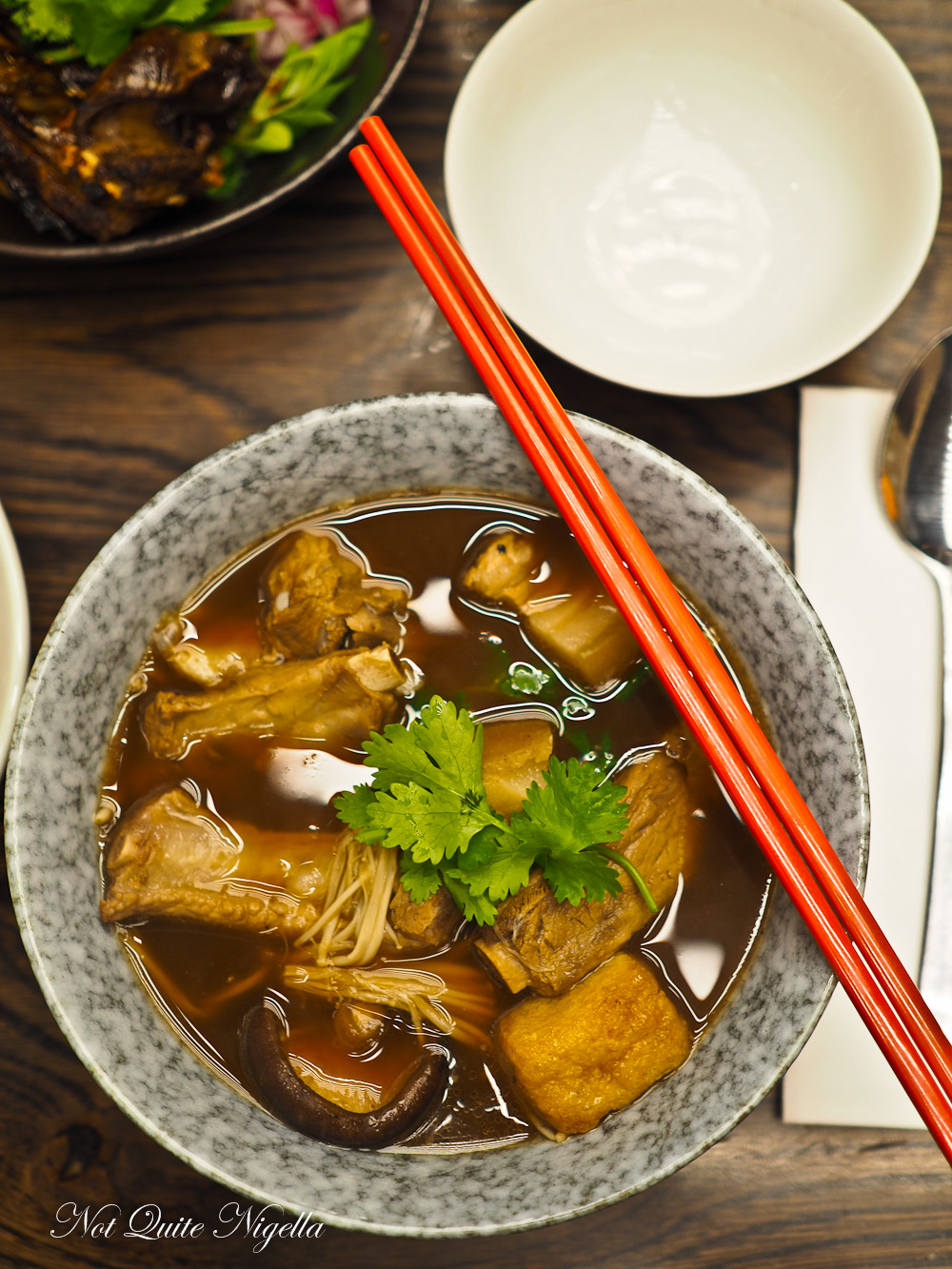 We order both the old fashioned and the dry BKT and if you do you're best off eating the soup version first as it is milder. It's very comforting and the bowl of soup comes with unlimited refills. "And if you don't ask for a refill we will be very sad," says our waitress jokingly (or not, I'm not sure). There's plenty of pieces of pork belly, pork ribs, a chicken leg and meatballs and tofu puffs. This is a dish that was designed to feed many during the 1930's depression era so it goes a long way to filling up tummies. The broth is what's on show here really though, it's complex containing 23 herbs and spices and it's slightly herbal medicinal aspect can only mean that it is very good for you. 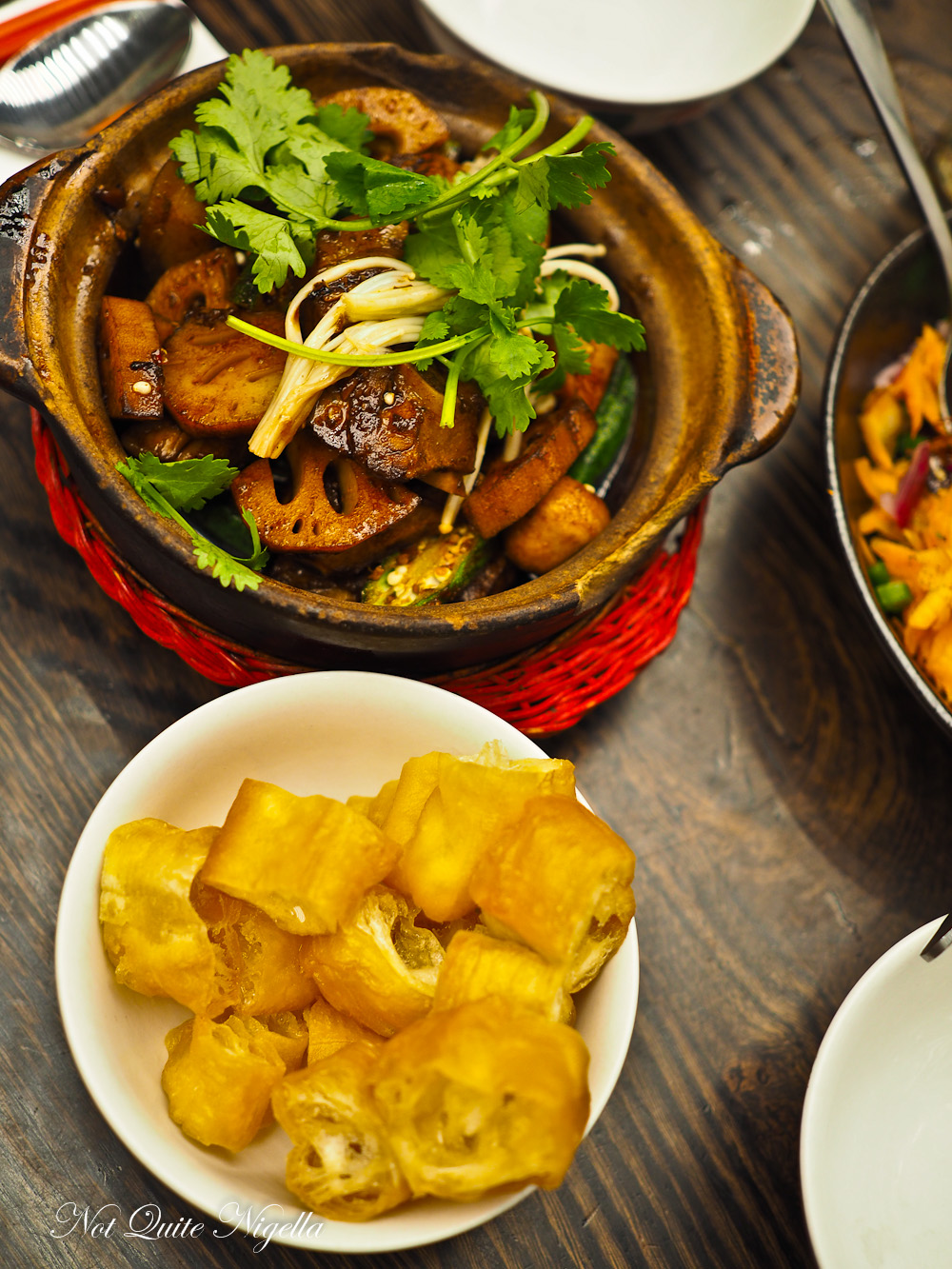 I have to admit though I adored the dry BKT mainly because I loved the spicy, bold sauce with garlic, soy and chilli and the tender meat. Again there are pieces of pork belly, smoky pork rib, lamb rib, beef rib but I also like the generous amount of lotus root and okra added to this as well as pork balls. And the Chinese donut which we ordered for the soup BKT is actually delicious dipped in the same and you definitely want a bowl of rice to soak up the sauce.

There's no dessert menu so we ask for the bill. The dinner is a steal at just $58! Another thing to keep Mr NQN happy...

So tell me Dear Reader, do you tend to get sick when you travel? Any tips on how to avoid that? And have you ever tried Bak Kut Teh? 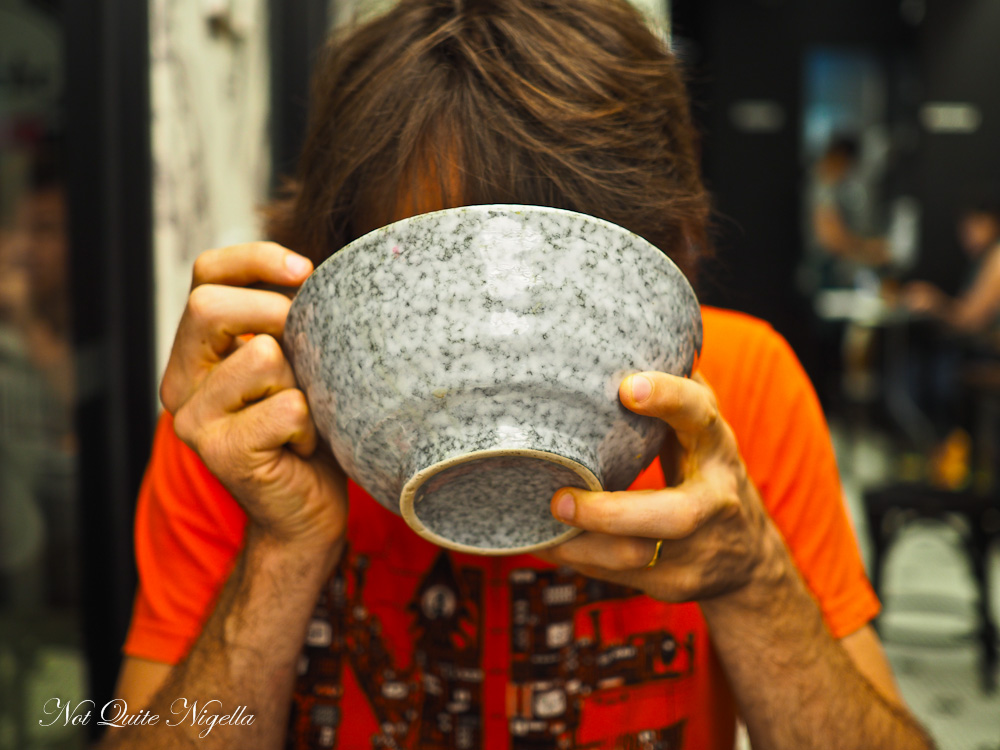