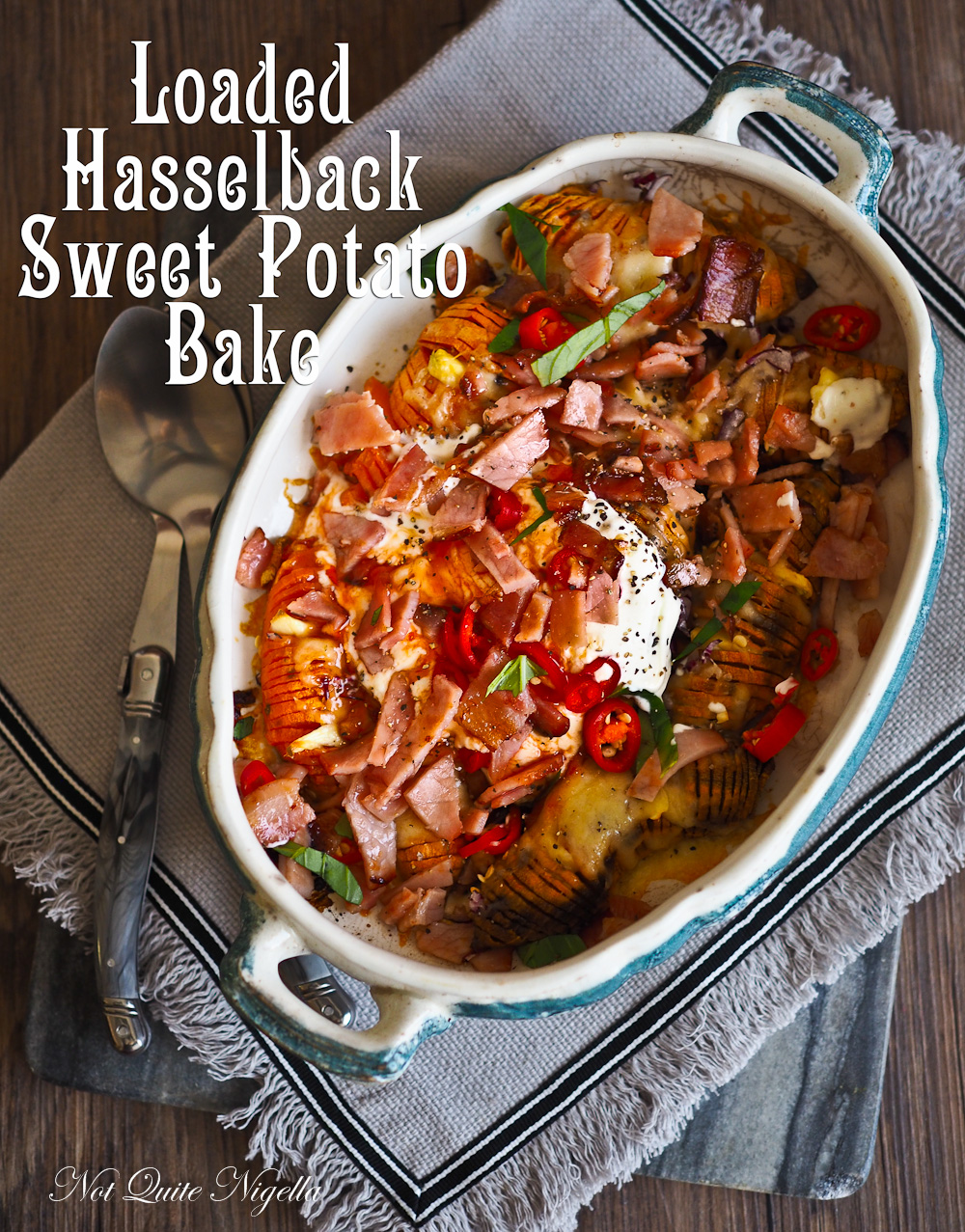 I think the MVP for best vegetable this year has got to be the sweet potato. You can do so much with it (delicious sweet potato frosting or sweet potato toast!), it's tasty, super cheap and lasts for a while. And in this post I share a tip on how to easily make your hasselback cuts using none other than a pair of disposable chopsticks! It's much easier and faster than using a spoon to cradle the potato. 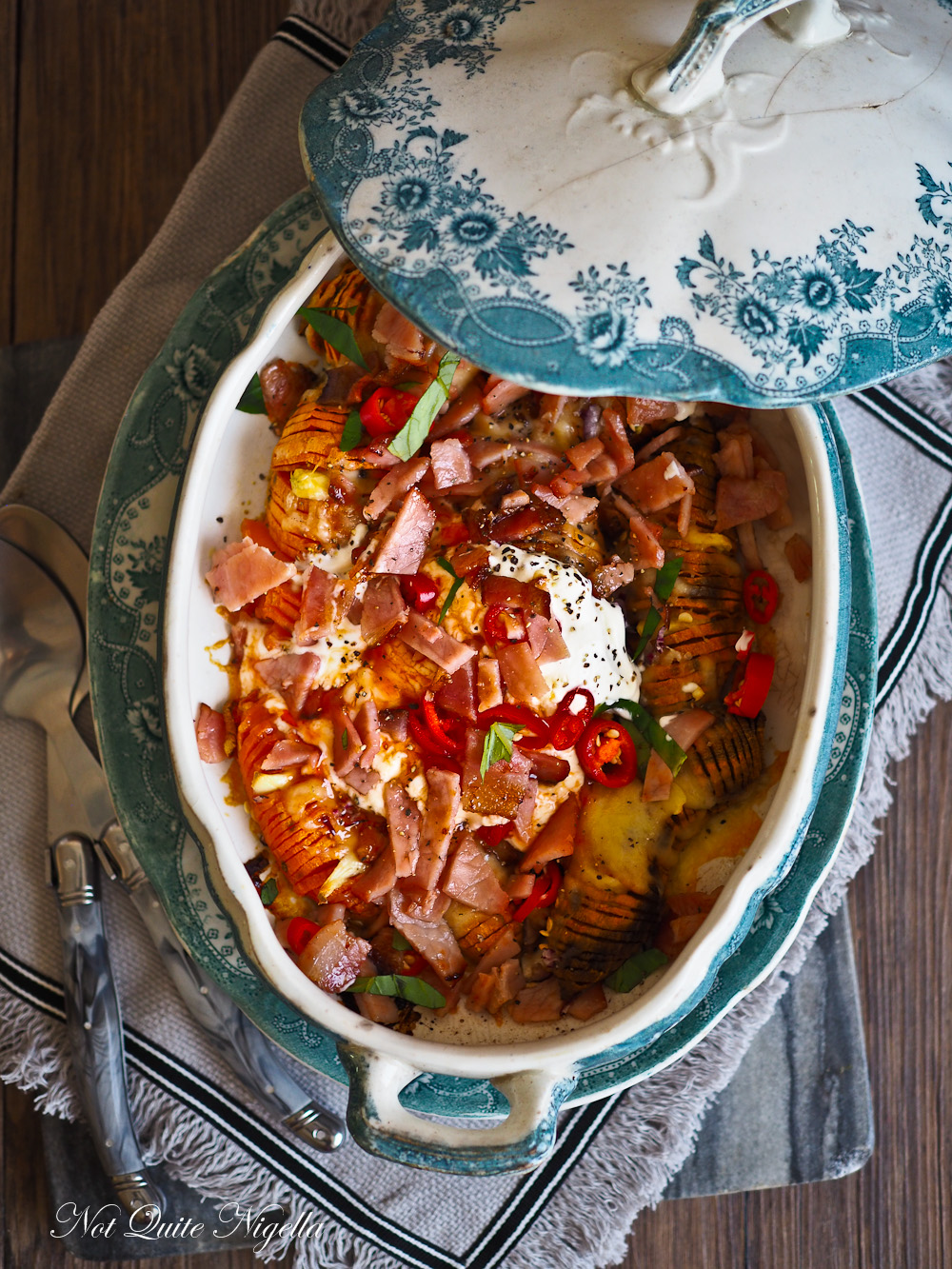 I was originally going to make the sweet potatoes as individual sides and you certainly can. But I thought that a big bake might be more complete meal for dinner. The savoury bacon cuts some of the sweet potato's natural sweetness and the sour cream and melted cheese is just right for winter comfort food or for snuggling in front of the television.

Speaking of television, have you been watching the return of Twin Peaks? Mr NQN and I watched it the other day with Nina and Garth. Well Mr NQN didn't watch it, he played on his phone because he doesn't like many movies or tv shows apart from comedies and documentaries.

Video of how to make loaded hasselback sweet potatoes!

The remaining three of us watched the new Twin Peaks slightly confused and intrigued. The first episode hooked us in with not just one but two murder scenes but the second and third episodes mainly confused us. It reminded me more of Twin Peaks season 2 than season 1. Season 2 was a bit mad and full of scenes that didn't quite fit together like a crazy dream whereas Season 1 was more of a coherent murder mystery. However it was delightful to see some of the original cast return and I recalled my crush on a young Agent Cooper-he was so good looking and so quirky! Swoon! 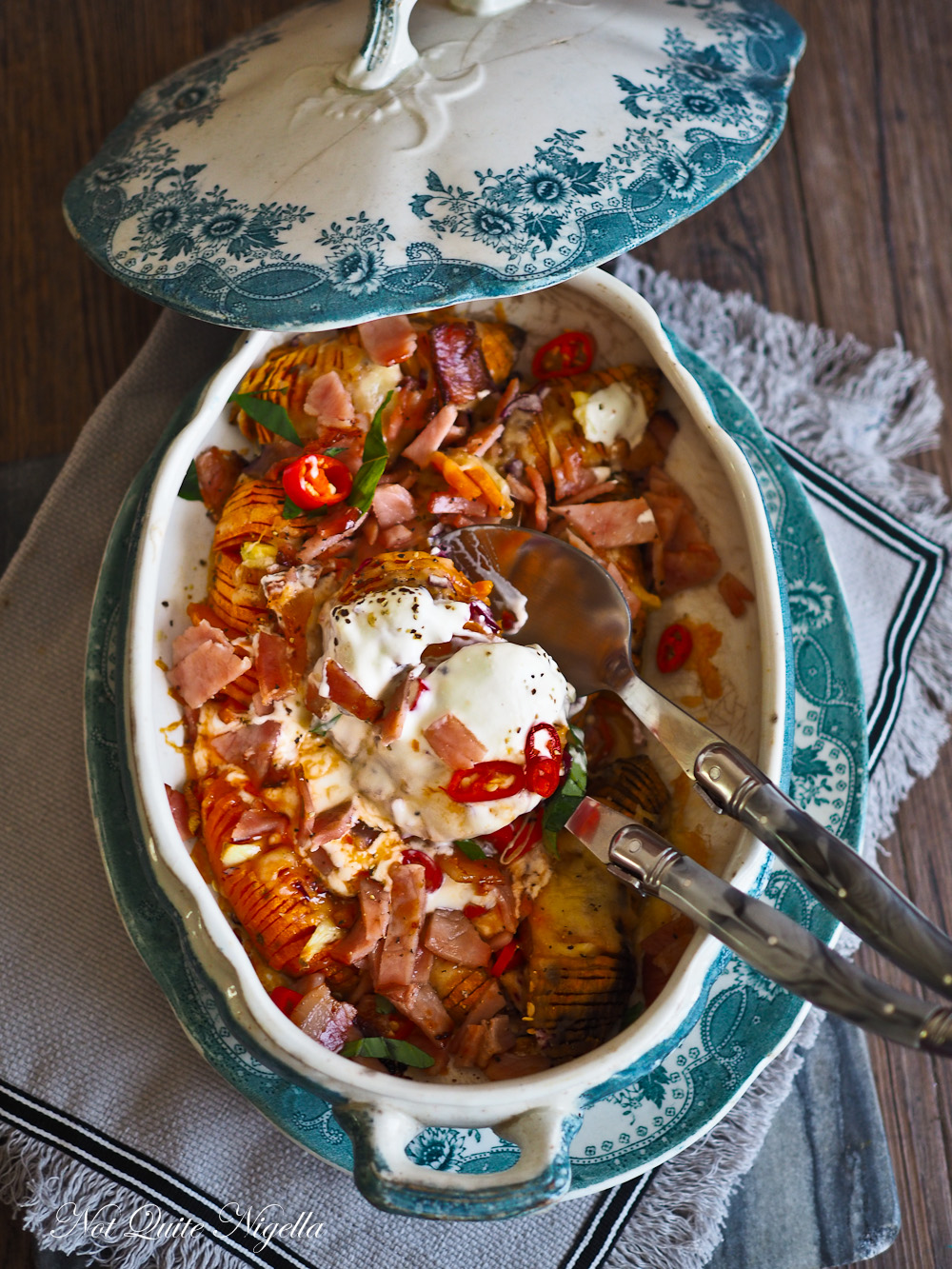 I haven't yet watched episodes 4-6 so I hope it gets back to the murder mystery part of the story. Nina has promised to wait so that we can watch it together (which is very nice of her since she has the streaming subscription!) and I'll make sure to bring her a tray of this sweet potato bake to eat sans the bacon as a token of appreciation!

So tell me Dear Reader, have you been watching Twin Peaks and what did you think? Do you eat a lot of sweet potato? What has been your MVP food or food that you've enjoyed the most this year? 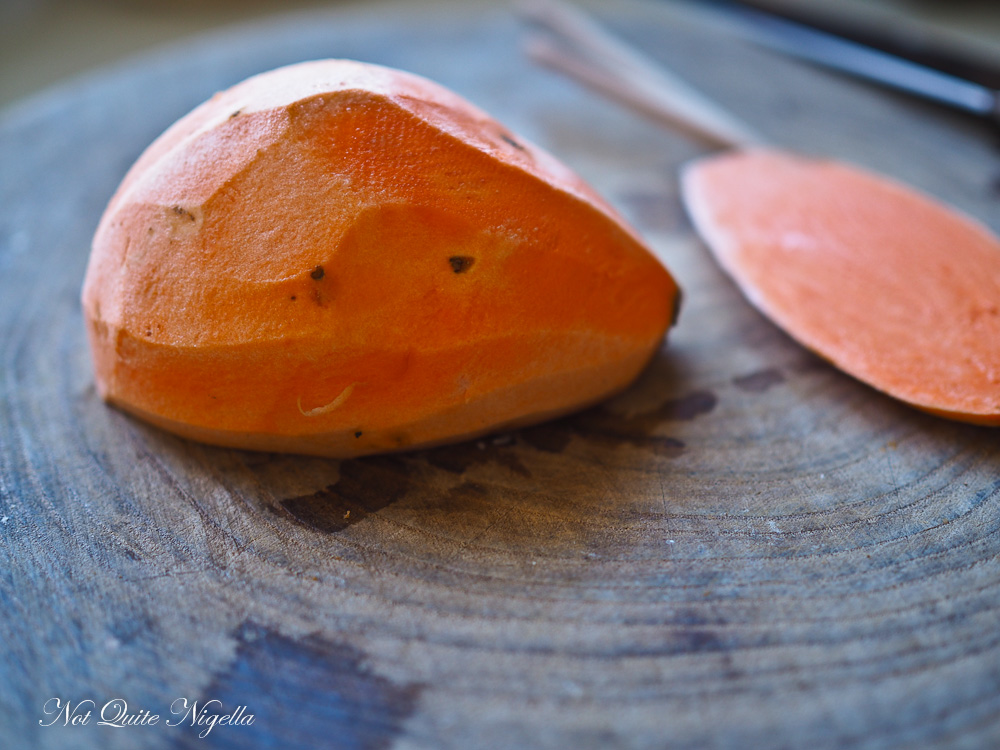 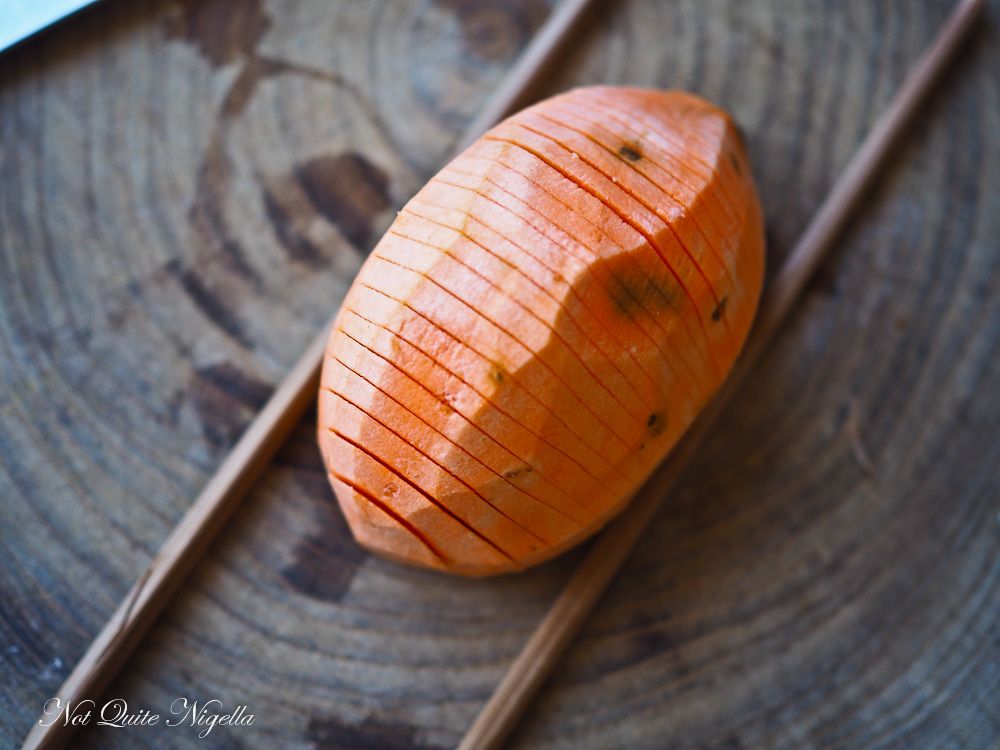 Step 2 - I put the sliced off bits on the base of an oven proof dish and then place the sliced sweet potatoes around them. Drizzle with oil and roast for 30 minutes. While it is cooking lay the bacon rashers on a lined baking tray. 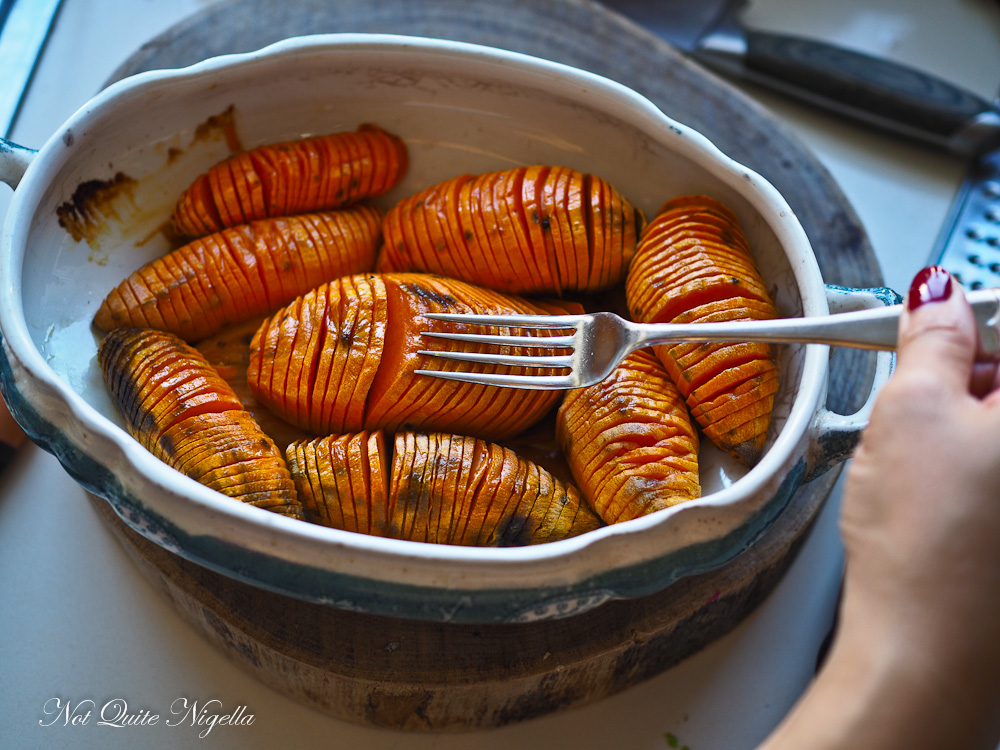 Step 3 - After 30 minutes take the sweet potatoes out of the oven and gently press a fork or spoon on them to separate the cuts. Roast for another 15 minutes and slide the bacon into the oven and cook for 20 minutes. Remove and chop. 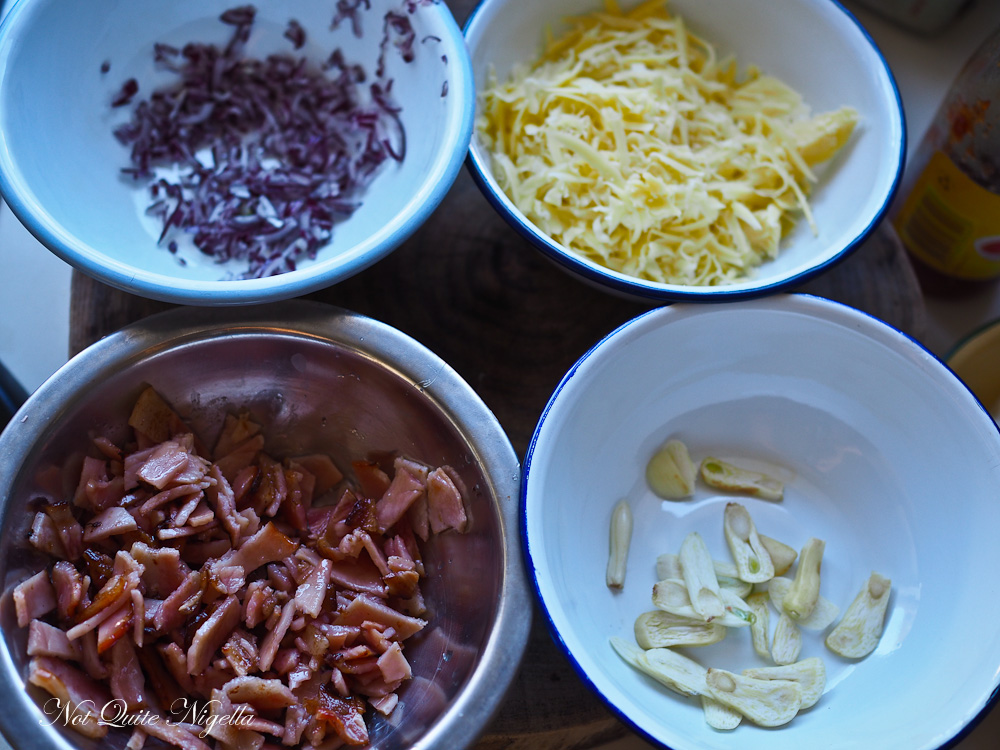 Step 4 - Then remove from the oven and slide 2-3 thin slices of garlic in each sweet potato. Sprinkle cheese and red onion over this and bake at 200C/400F for 5 minutes until cheese has melted. Top with sour cream, chilli sauce, bacon pieces and herbs.