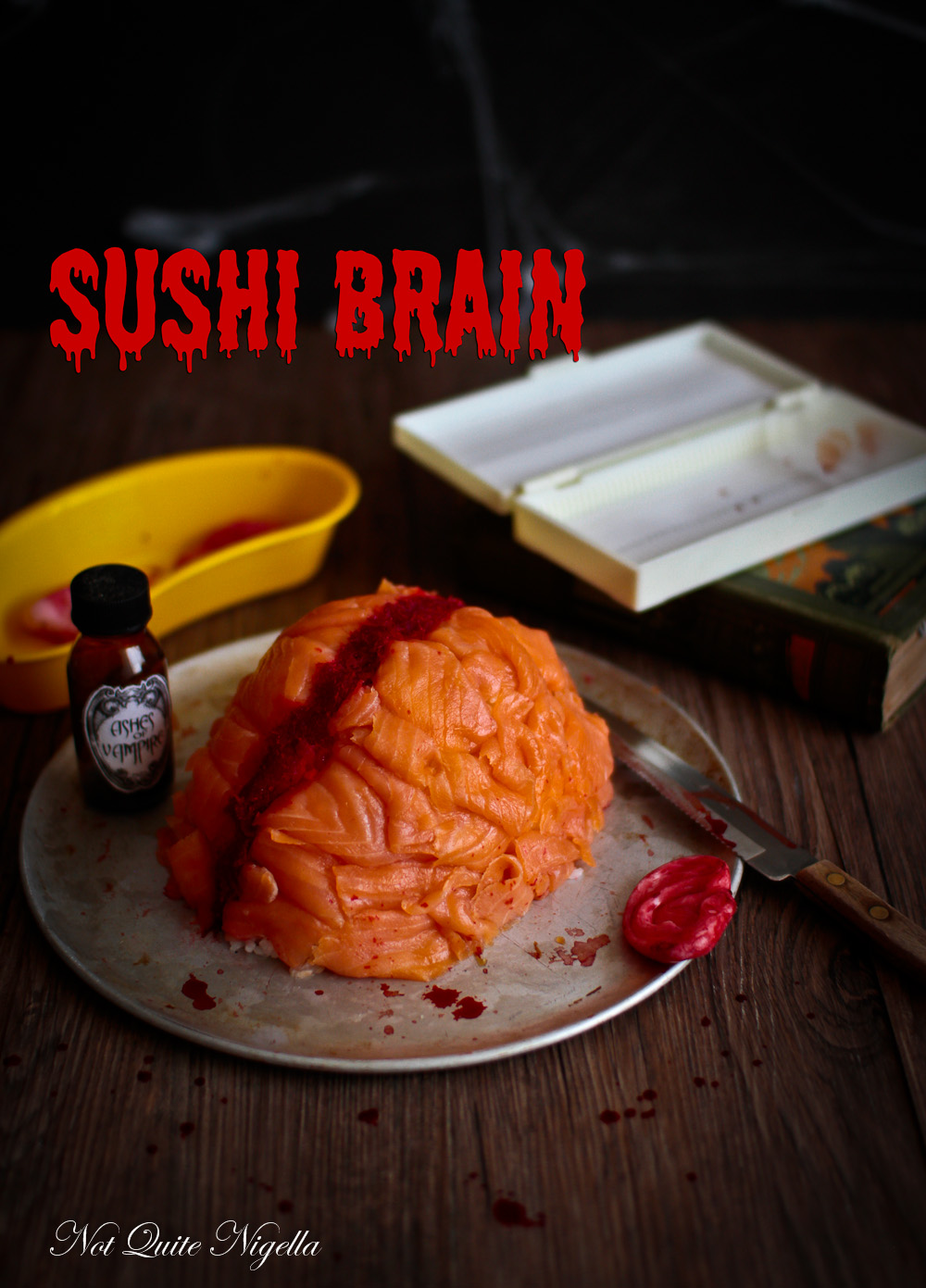 Hello ghouls! I'm so excited that it's October and almost time for Hallowe'en! Please allow me to present my first offering to you this year: a ghoulicious brain sushi hiding a chive cream cheese stuffed avocado and covered with smoked salmon slices and caviar. Serve with "Ashes of Vampire" aka soy sauce!

October is my favourite time of the year, mainly for Halloween related reasons. The weather is warm but not sweltering and I spend the whole month planning ugly, ghoulish things instead of pretty. Pretty? You can rest up this month, I won't need you. 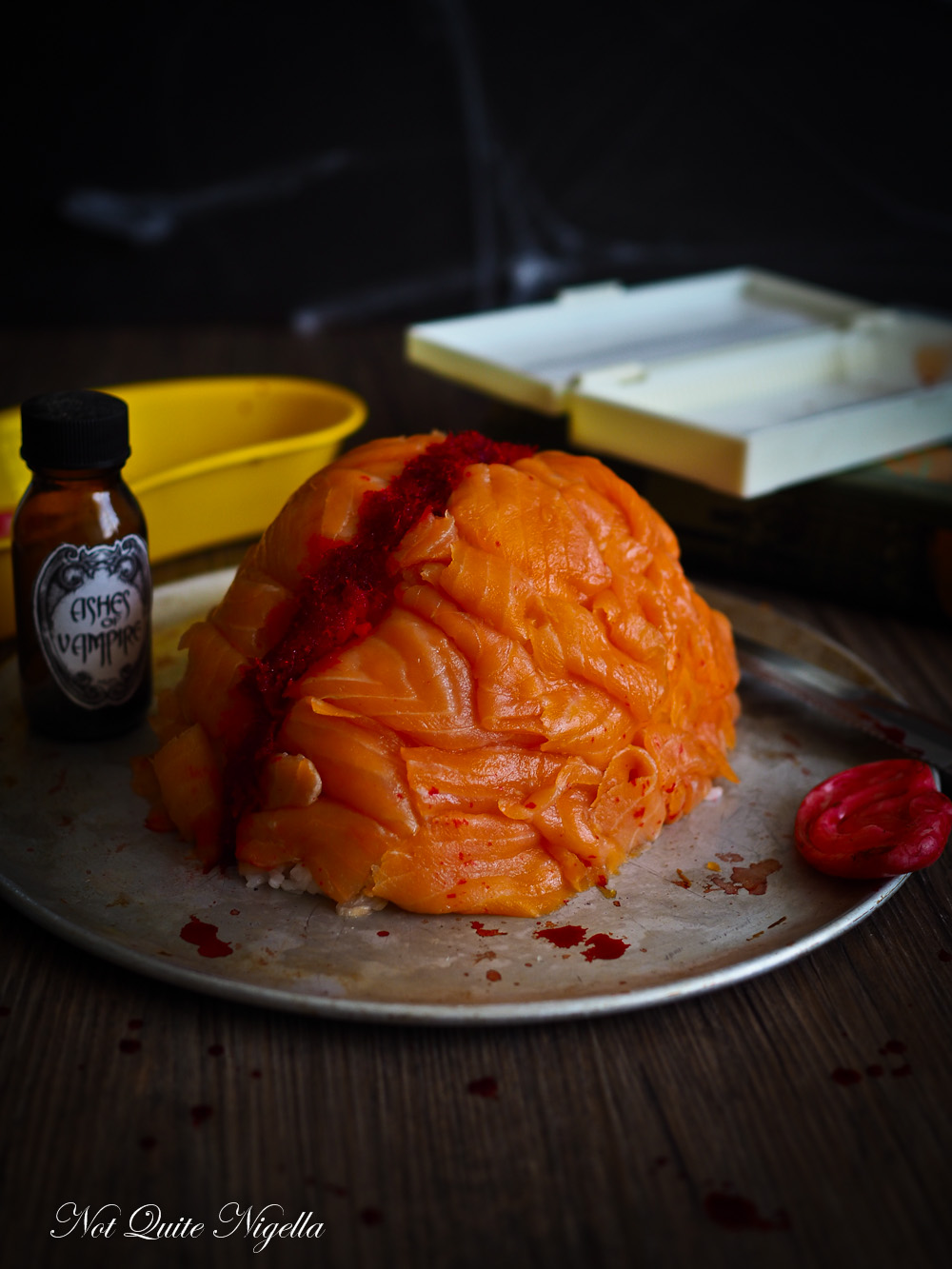 A lovely follower @emailcarm on Instagram sent me this recipe idea and I knew straight away that I'd make it! It's from Food Network although I'm not sure who made up the idea originally but it's makes for a giant sushi brain, one that you can slice up and feed a few people. It also happens to be absolutely delicious (so I'm told, no seafood arrggh!). I liked it because Halloween is often dominated by sweet things but I liked this as it was savoury and quite healthy.

Speaking of ghoulish things, I recently told you about my newest pocast obsession My Favorite Murder. You know when people ask you who you would invite to a dinner party? It's these two women Georgia Hardstark and Karen Kilgarif. I've now listened to all of the episodes so naturally I don't know what to do now except re-listen to them all. In one episode they talked about a quick psychopath test. Devised by a psychologist it is said that if you can guess the answer, you might well be a psychopath! Want to hear it? Ok, here goes:

_While at the funeral of her own mother, a woman met a guy whom she did not know. She thought this guy was amazing, so much her dream guy she believed him to be, that she fell in love with him there and then... A few days later, the girl killed her own sister.

Question: What is the woman's motive in killing her sister?_

Did you get it? Ooh tell me if you did! I'll put the answer at the bottom after the question. Mr NQN got it straight away which worried me a little so naturally I served him this brain cake (he was getting it any way). I will be sleeping with one eye open too ;) 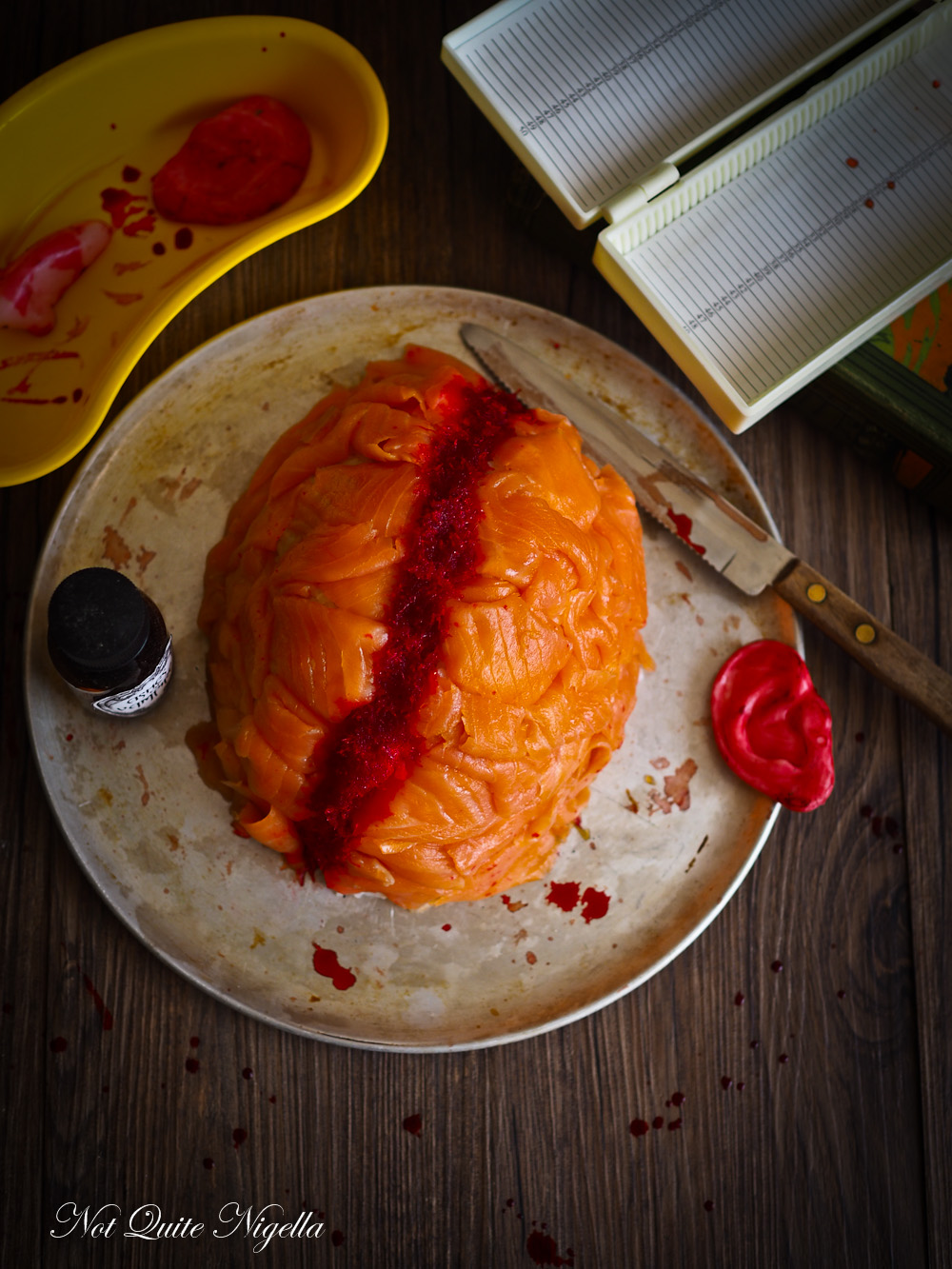 So tell me Dear Reader, what is your favourite month of the year? And did you guess the correct answer to the psychopath question?

Answer: She was hoping that the guy would appear at the funeral again. 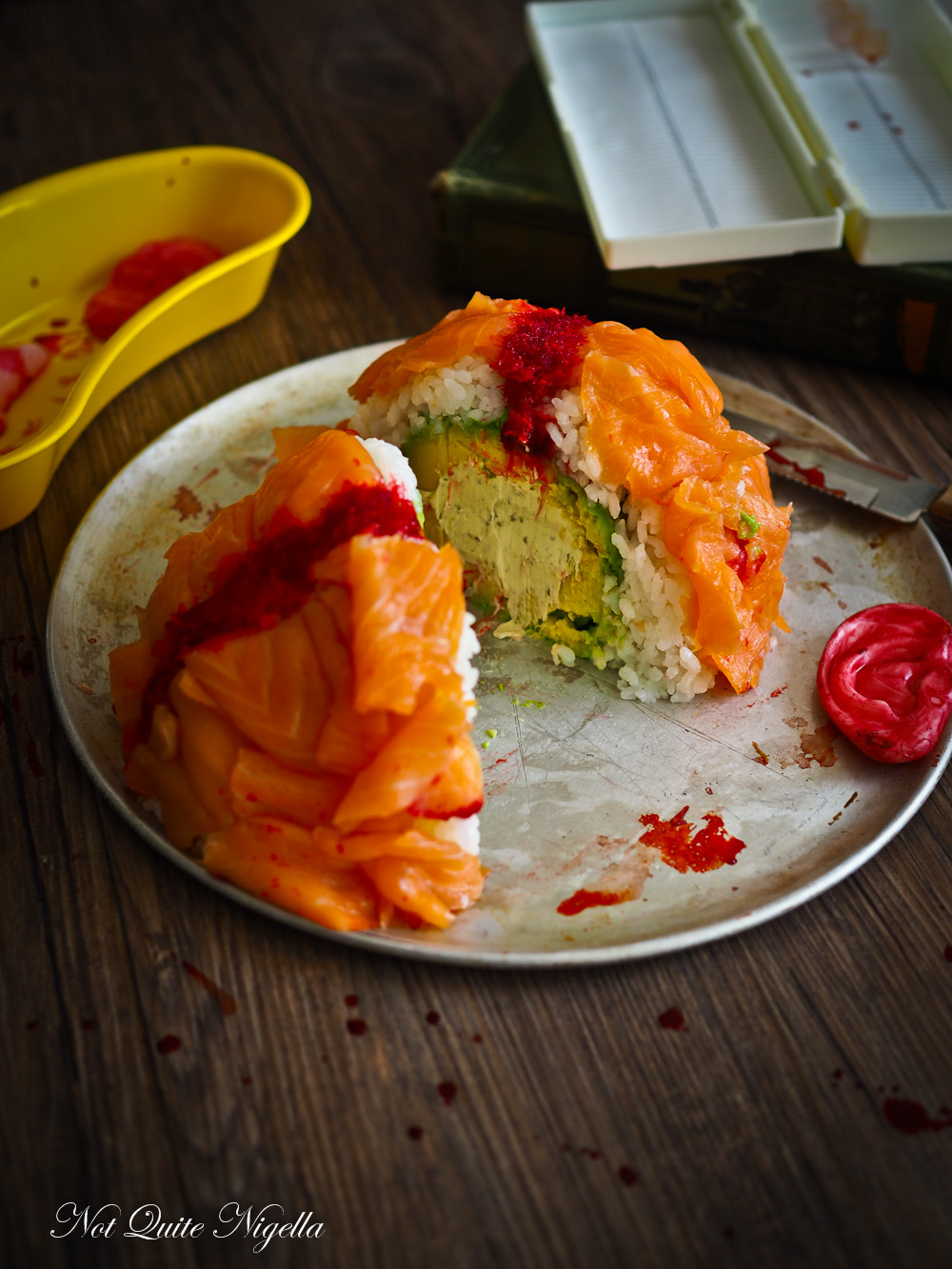 Buy thinly sliced smoked salmon. Smoked salmon pieces don't work as well as they are the ends that they cut off and won't fold in the way that you want.

Step 1 - Rinse the rice several times until the water runs clear. Add the water and cook according to directions. Stir in the sushi seasoning and allow to cool a little. 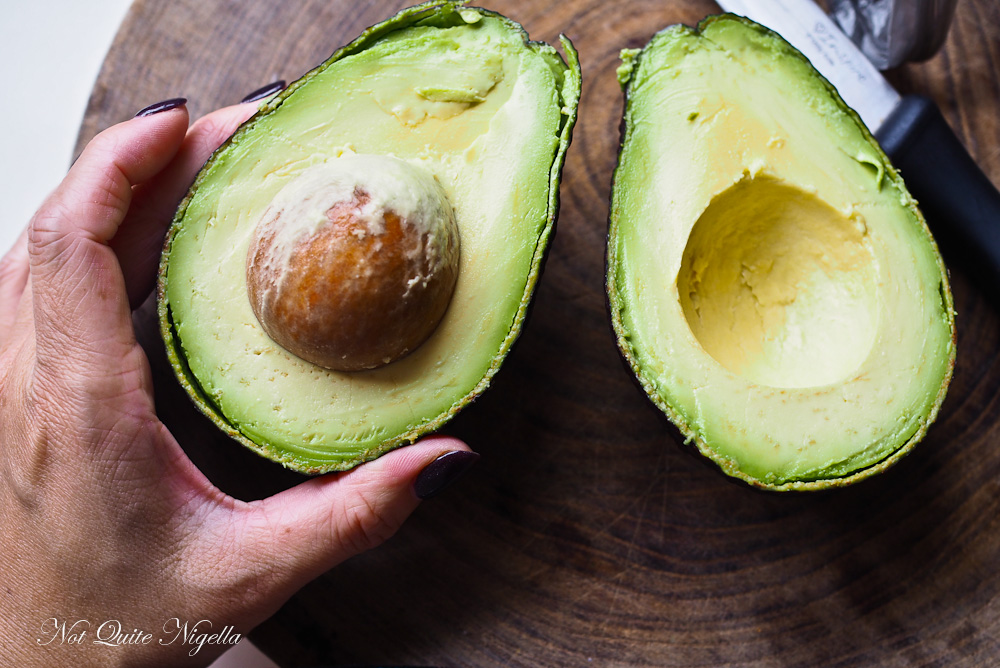 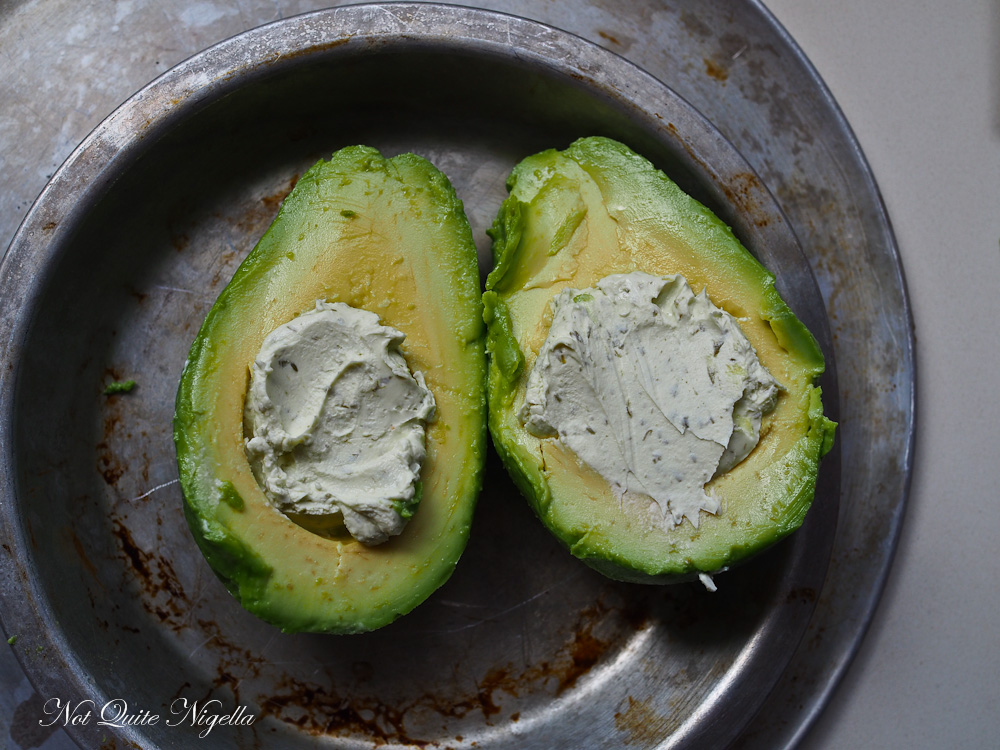 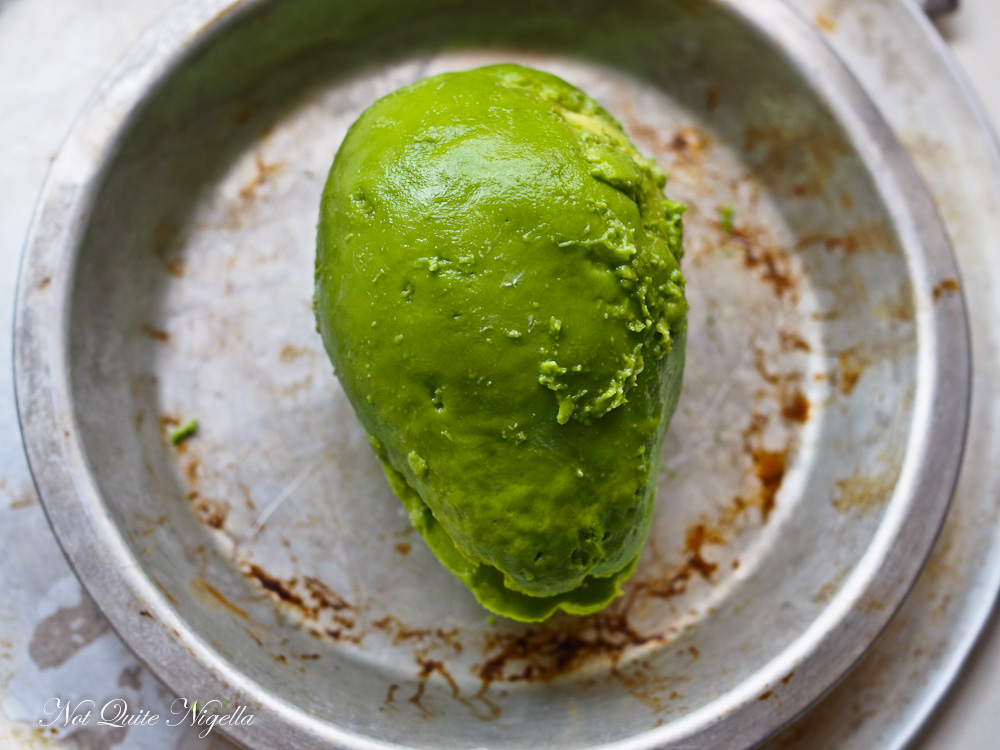 Step 3 - Using damp hands, press the sushi rice around the avocado. You may not need all of it (it depends on how big your avocado is, I just had 1/4 cup of rice left over). Press down the centre of the "brain" with your finger. 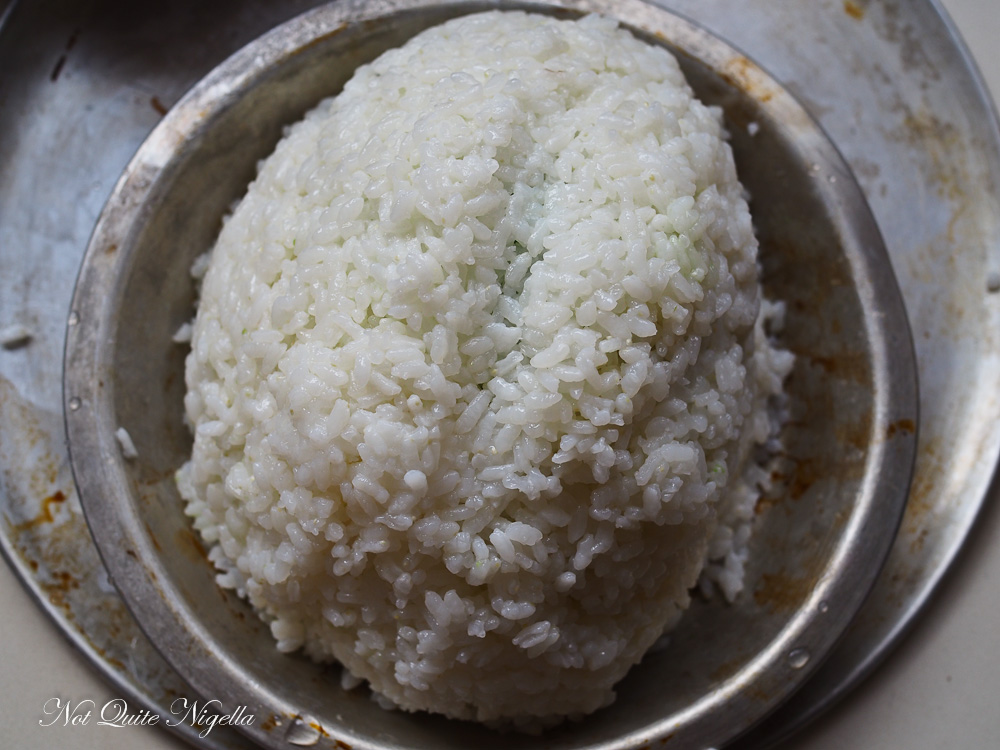 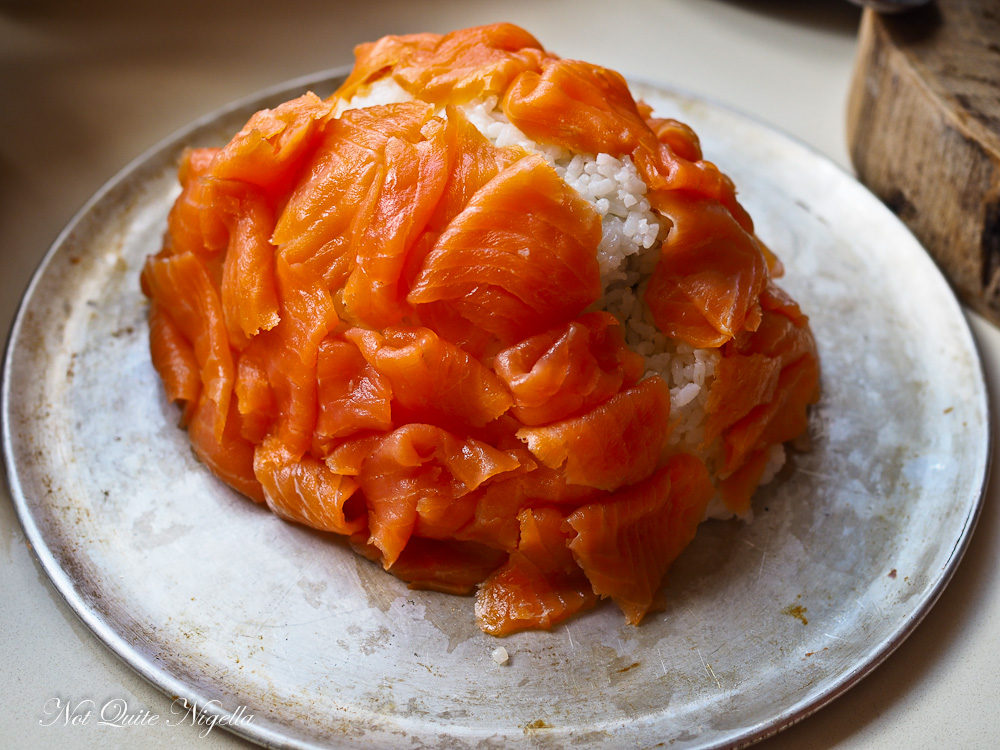 Step 4 - Fold smoked salmon pieces and make a brain pattern. Cover with oiled cling film to create more of a brain shape and then place red caviar in the centre.