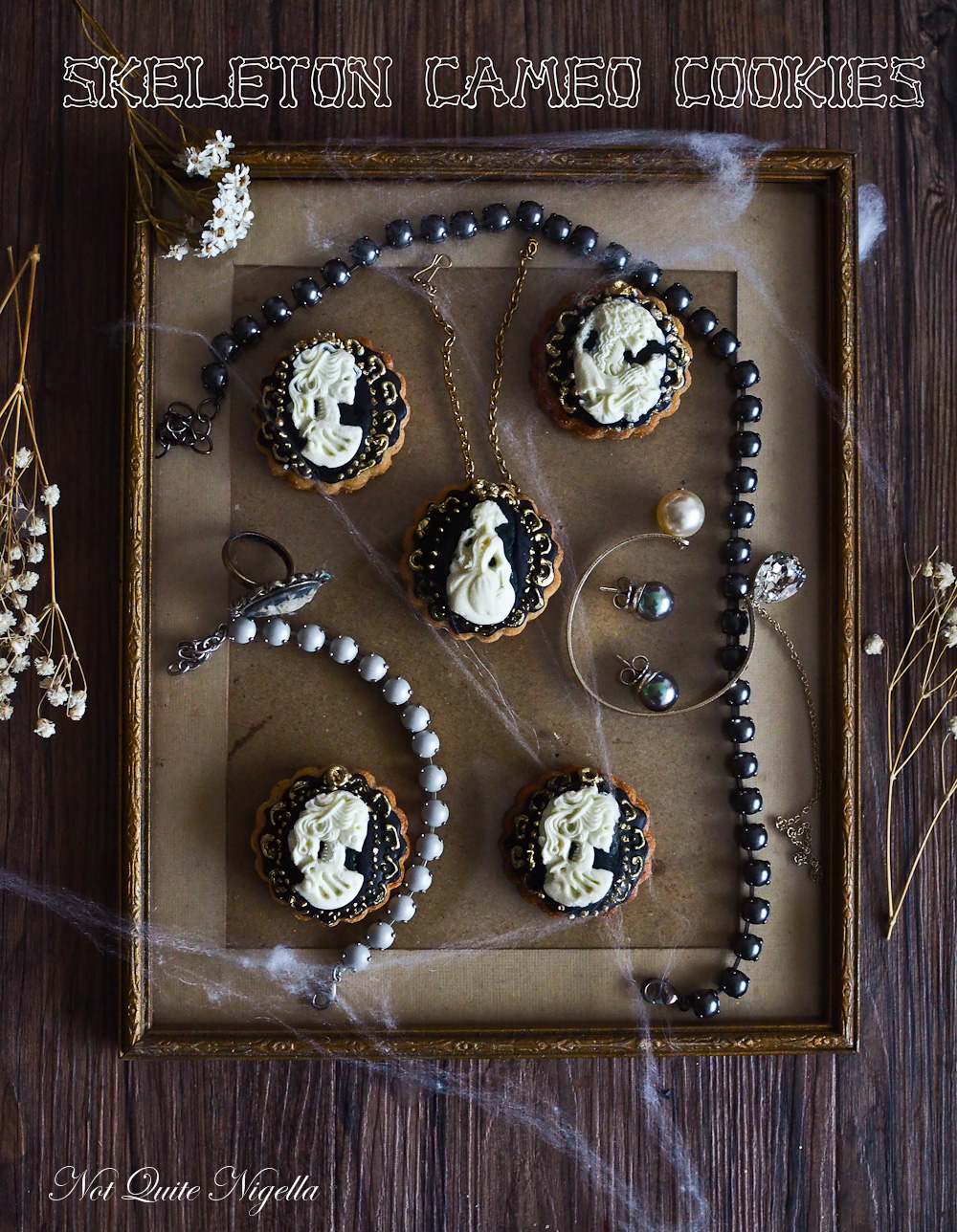 Happy Hallowe'en my dearest ghouls!! I hope you have a wonderful time and that it is more treat than trick! My last Halloween recipe for the year is a sweet treat. These intricate Cameo Skeleton Cookies are easy to do with silicon molds but there are a few little tricks and tips to make these are frighteningly detailed as possible!

I had wanted to make these for the longest time. I put them off because I had assumed that they were difficult as they are so detailed but the mold really does most if not all of the work. I tried doing this with chocolate and while it looked good, they were so fiddly and tricky so I settled on fondant and they were a cinch-fiddly but straightforward.

Before I forget, I've uploaded a quick tour of our Halloween party house on youtube. We were so delighted holding it at Q Station (said to be one of the most haunted places in Sydney). And although we didn't quite have any hauntings, it was creepy enough. I don't know if I could actually handle seeing an actual ghost at close range or having a supernatural incident.

A friend of mine once told me that she lived in an apartment in Darlinghurst with her boyfriend and dog and they had suspicions that the place was haunted. There were little things - objects would be moved slightly but they thought each other had moved them. Small things like a set of keys moved from a sideboard to a table. And sometimes she blamed herself and thought that she was absent minded. 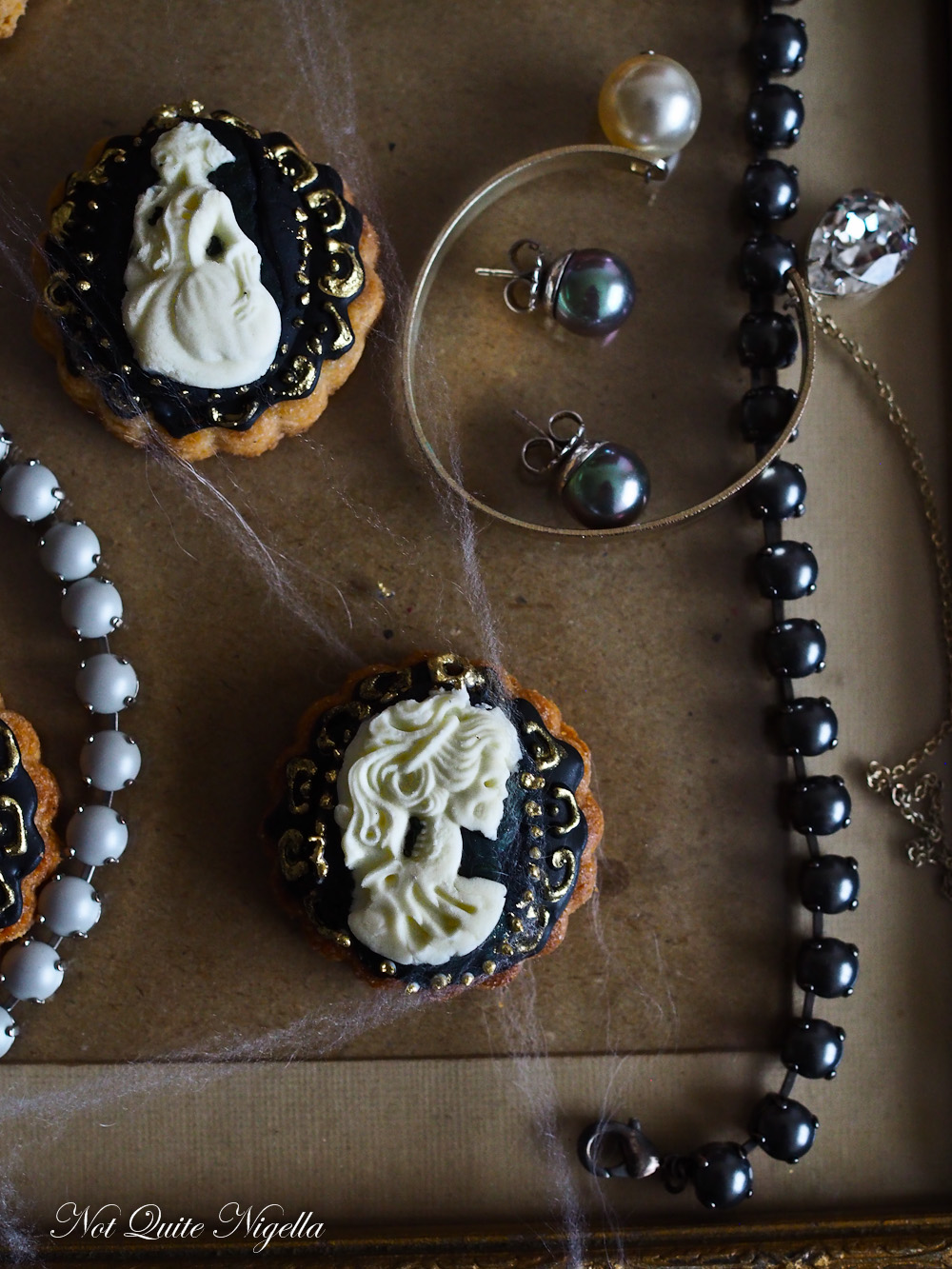 Then things increased a little. Doors started to slam shut without any windows being open. "It's not haunted," they'd whisper to themselves. They didn't want to leave as it was hard to get that apartment (a comment on the Sydney rental market). One night, her boyfriend was out and she was home alone with her border collie. The air felt a bit different, charged with volts of electricity almost as if you could see it. "I'm going to go to bed," she said trying to sleep off the problem. 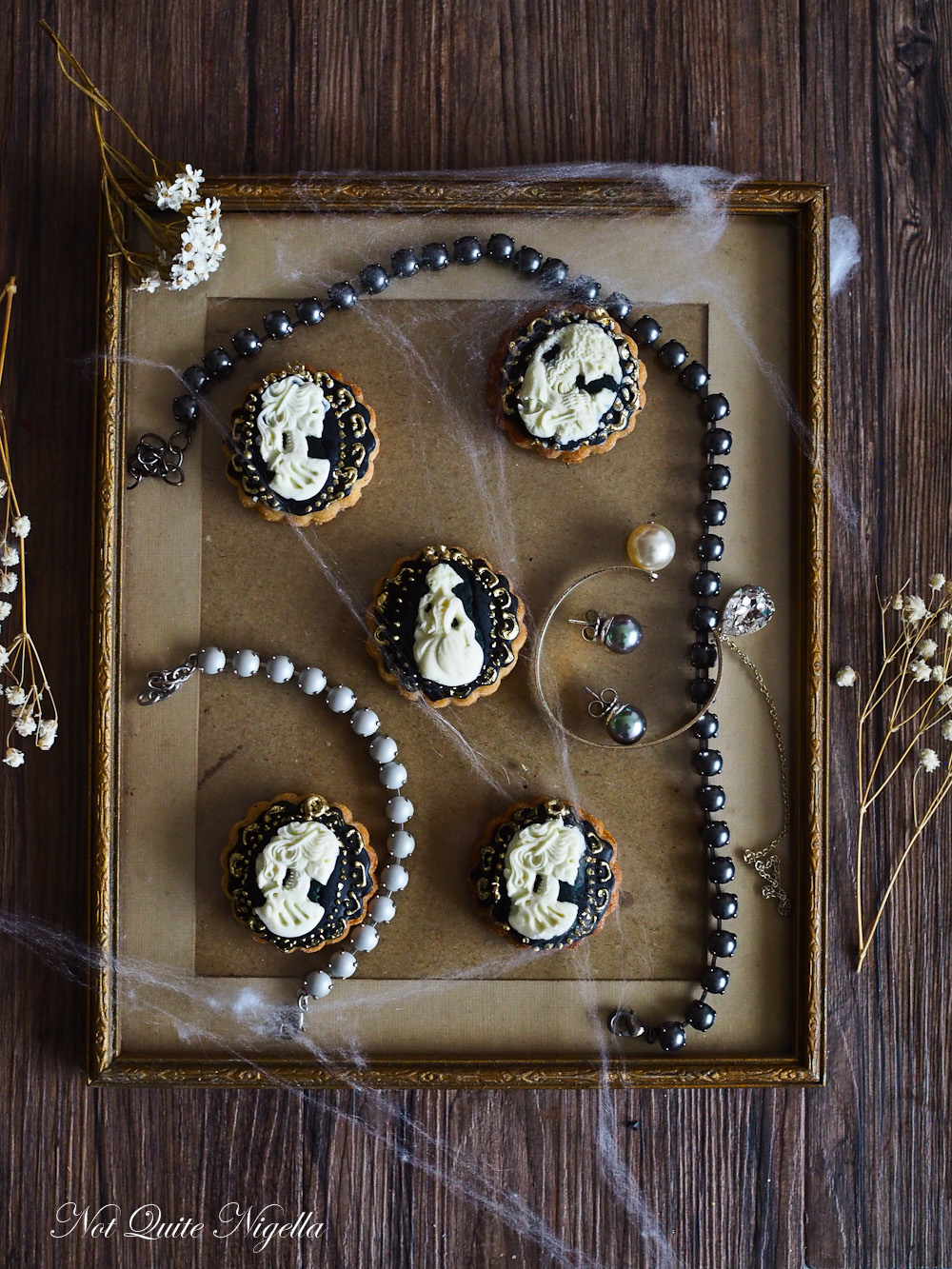 She crawled into bed and pulled the quilt over her with her dog sleeping in a bed by her side. And as soon as she did something snatched the quilt clean off the bed! She screamed and her dog barked like there was an intruder right in front of the bed. That was it - there was more excusing that behaviour and rationalising. They put in their notice to vacate the premises as soon as they could. Their landlord disclosed that there were many complaints of ghosts in the apartment and most tenants lasted a month or two before becoming spooked out. And that the ghost did like to do the sheet pulling trick! I do wonder if there are tenants currently there...

So tell me Dear Reader, have you ever experienced a ghost or lived in a haunted house? Do you believe in ghosts or an afterlife? And are you doing anything tonight for Halloween or did you celebrate on the weekend? 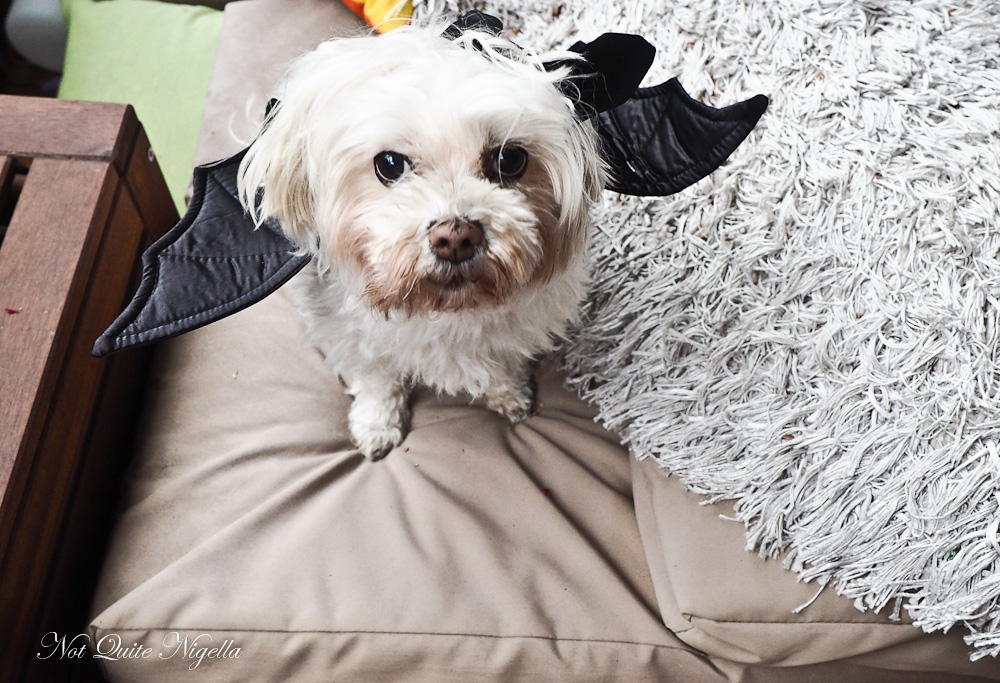 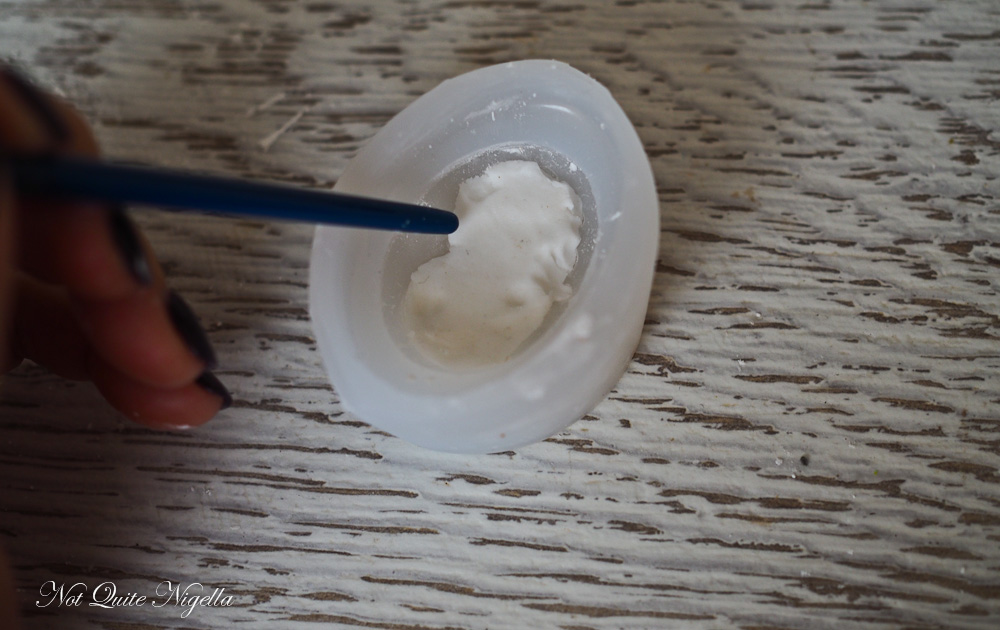 Nudging the fondant closer to the outline of the raised mold

Step 1 - First make the cameos so that they have time to set and dry. Brush a little cornflour into the cavitites of your cameo molds and press a small amount of ivory fondant into the cavity. This will take practice but using the end of a paintbrush nudge the fondant over so that it sits on the edge of the outline. If you go too far, you can always push it back. 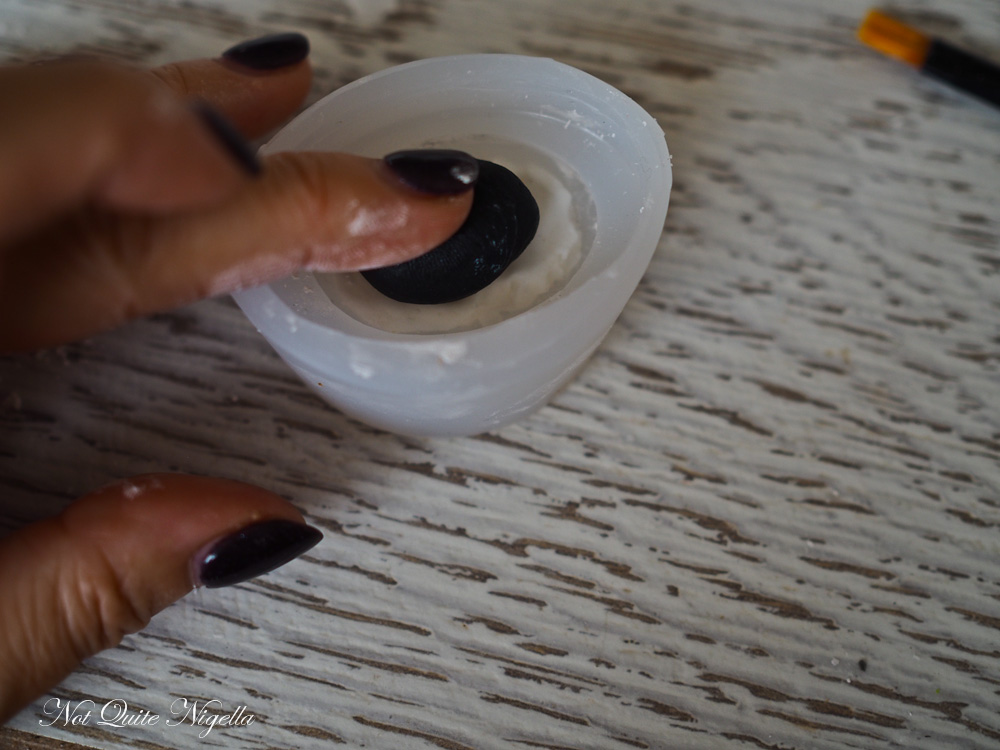 Pressing the black fondant into the mold

Step 2 - Then press a small amount of black fondant into the back of it and then lift out the cameo. Don't worry if you didn't get all of the outline (it can be tricky especially with a skeleton). Then take a small paintbrush and paint over the details that you may have missed. Allow to dry completely. 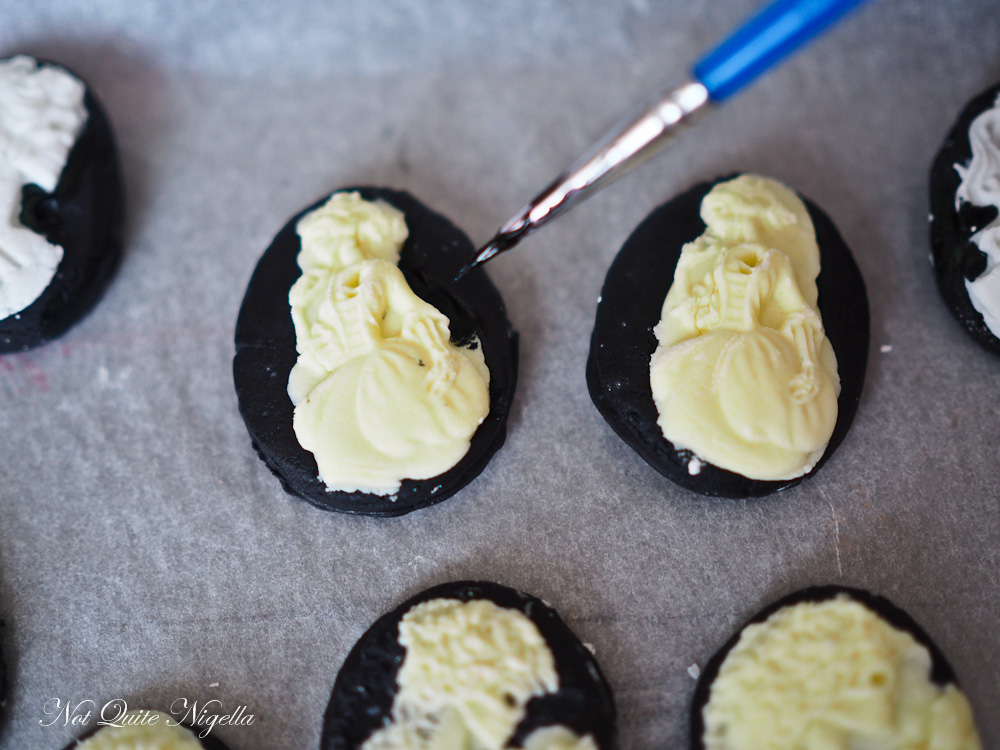 Step 3 - Beat the butter and sugar together until fluffy and light. Add the egg and vanilla and beat to combine. On the lowest speed mix in the cinnamon and flour. Form into two balls and place on a sheet of cling film. Flatten down the balls slightly and refrigerate for 1-2 hours or overnight.

Step 4 - Roll out one ball between two sheets of parchment and cut into small fluted rounds, larger than the cameos. If you have an oval cutter use this. I didn't so I used a round cutter. 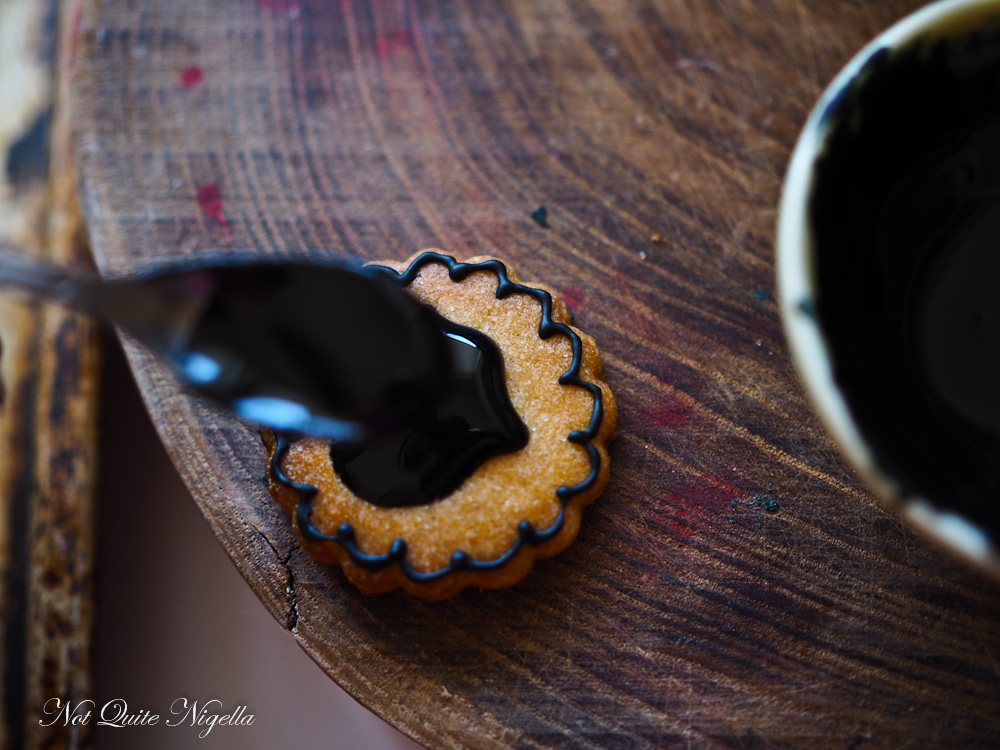 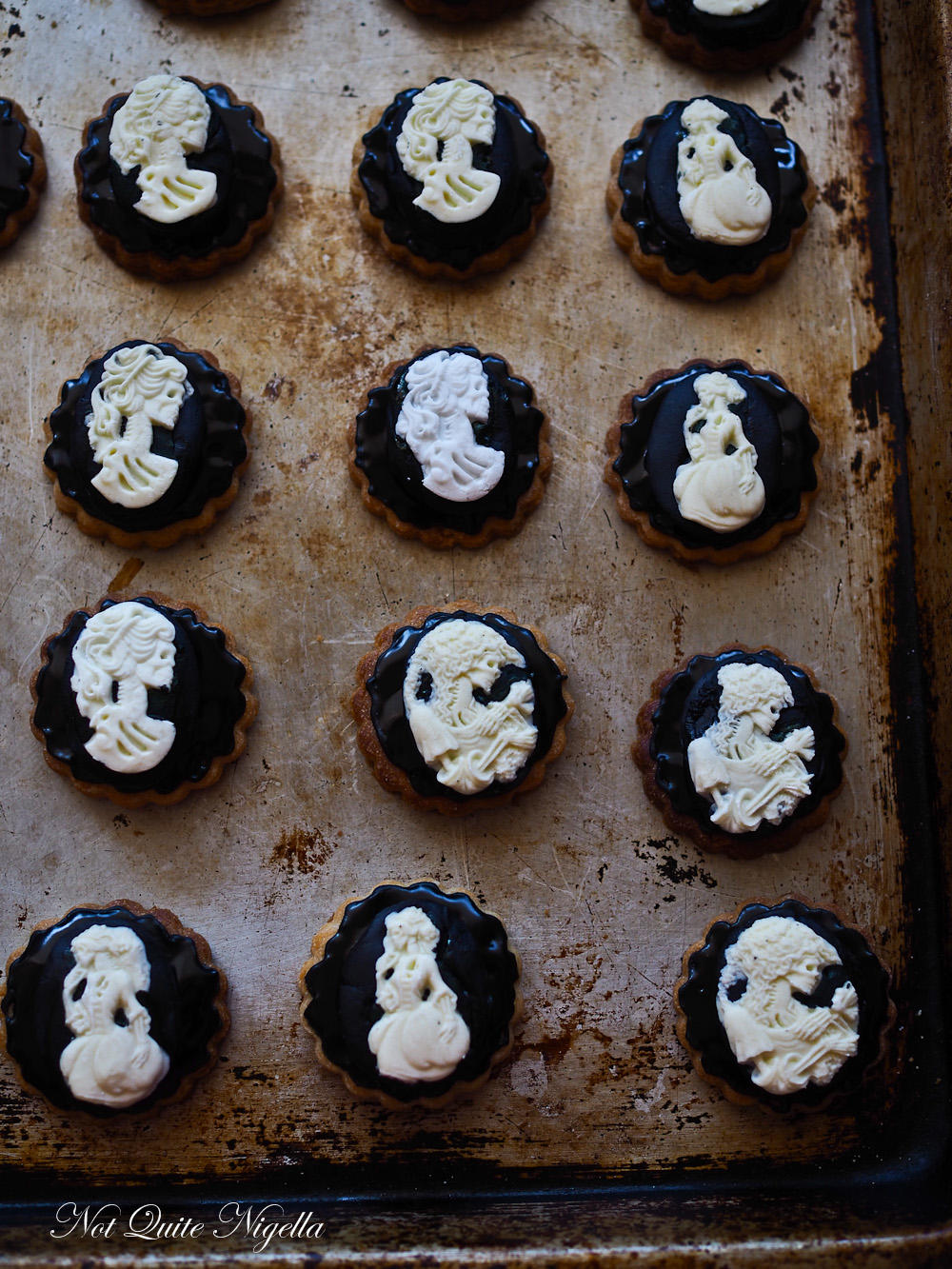 Step 6 - Pipe outlines around the cookies with the stiffer icing and allow to dry. Flood the cookie outline with a slightly runnier royal icing and leave to set. Gently place the cameos onto the drying royal icing cookie (do this while it is wet). Allow to set. 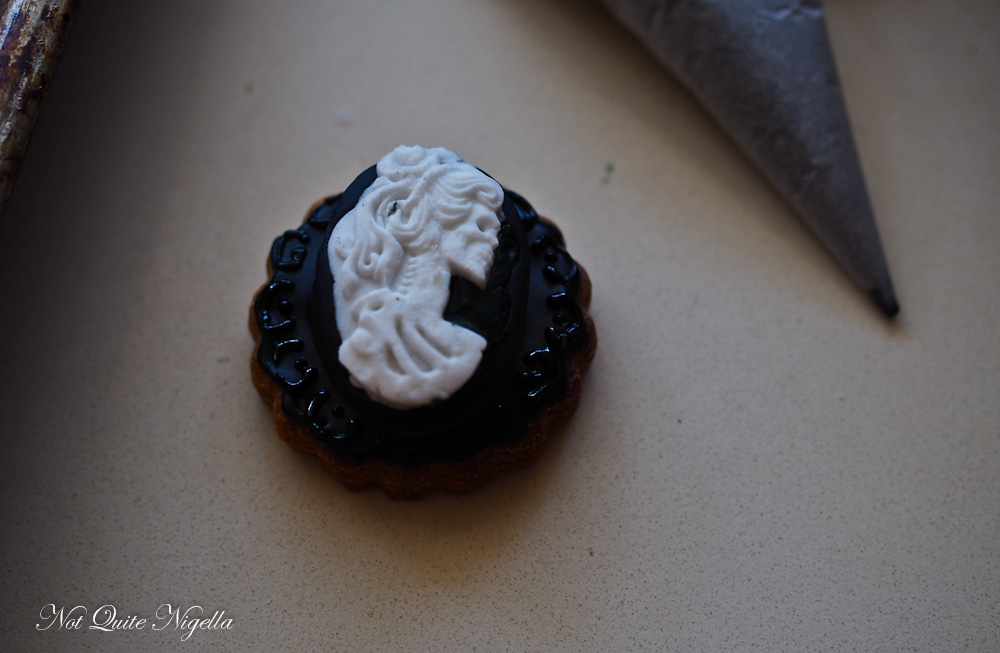 Step 7 - While these are drying, pipe elaborate curls or scrolls around the cameos and allow these to dry. It won't take long, about 15-30 minutes. Then carefully colour the scrolls and curls of black royal icing with the edible gold paint. 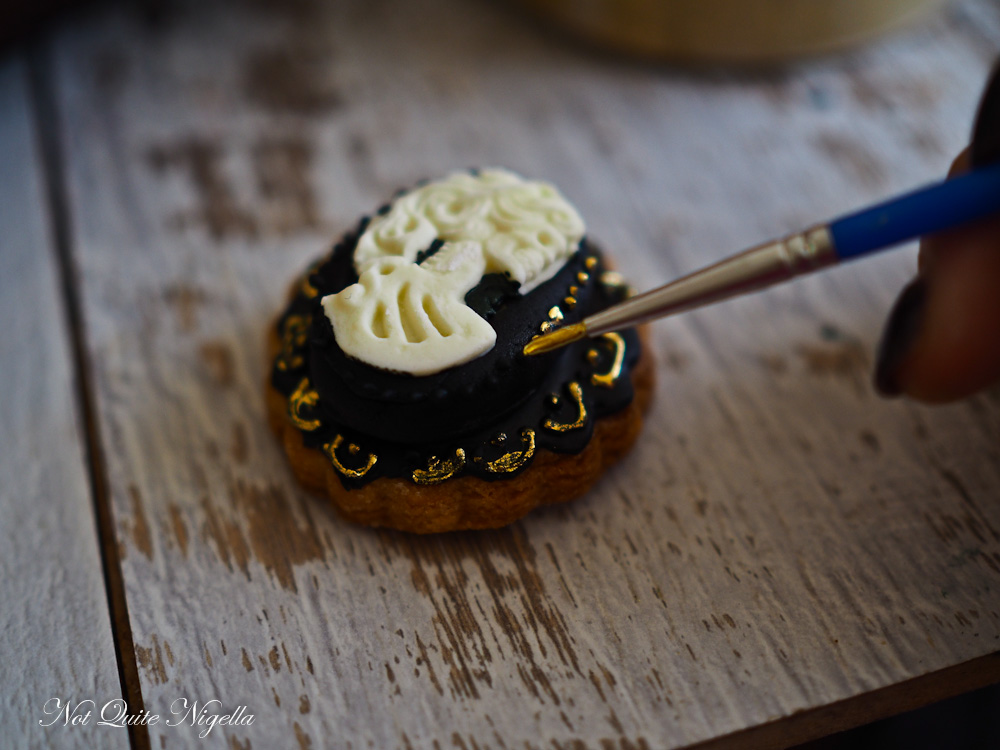