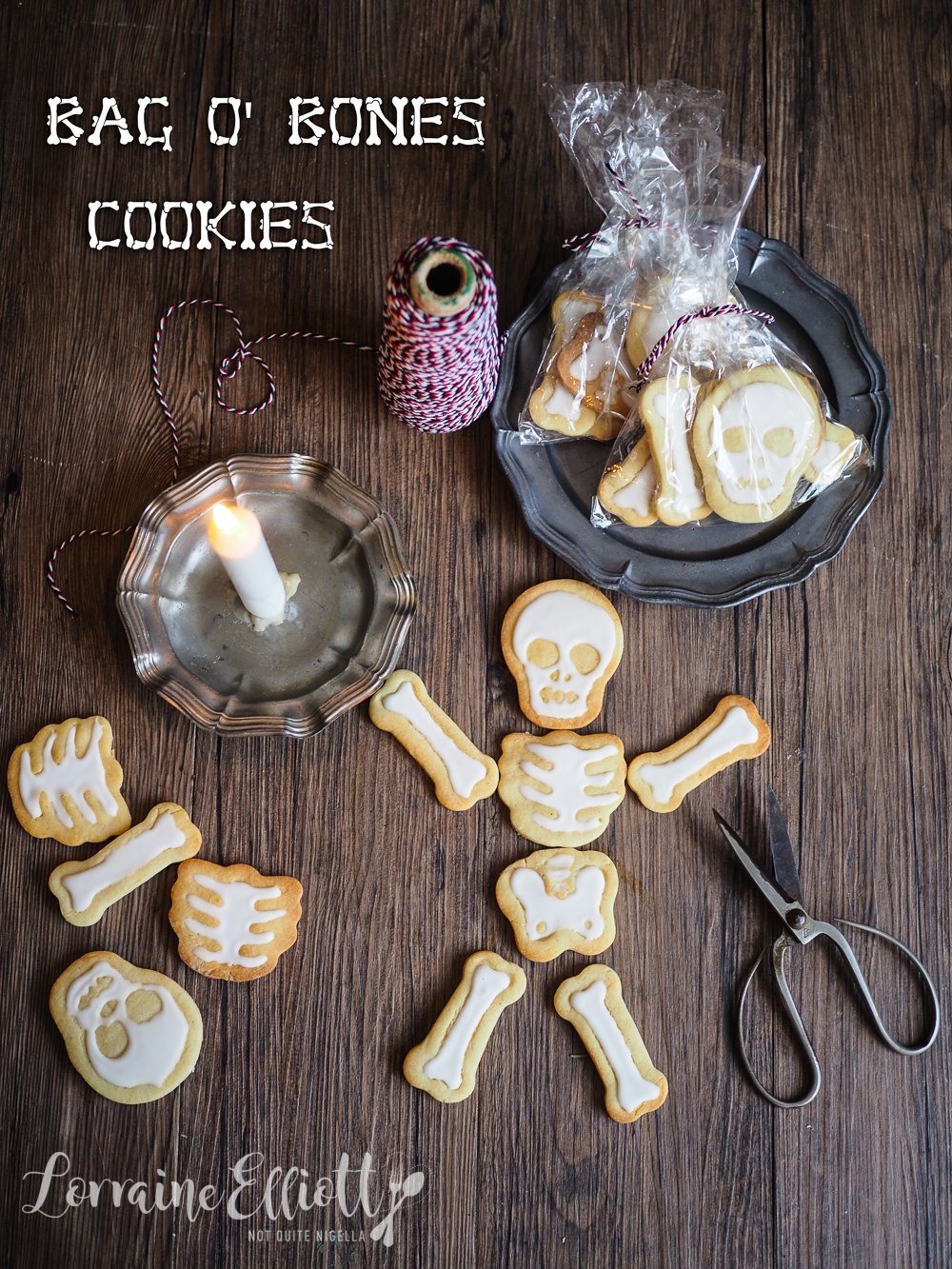 The month of October at Chez Lorraine is full of creepy delights in the kitchen. These bag o' bones skeleton cookies are a sweet way to creep people out! Crisp lemon and vanilla sugar cookies are patterned with royal icing. These make for a great snack or a Hallowe'en gift bag present too!

Every year I look forward to Halloween making scary, spookalicious delights for my Halloween party. I love making sugar cookies because they can be made ahead of time and the cutter does most of the work (especially with these indent cookie cutters). In fact these were a cinch to make.

I used my favourite reliable sugar cookie dough that doesn't spread and rolls and rerolls easily and once baked, the next day I filled the cavities with royal icing and it could not have been simpler! I like to think that these are cute scary because you know I easily go into grotesque scary at times and sometimes I don't know when to stop! 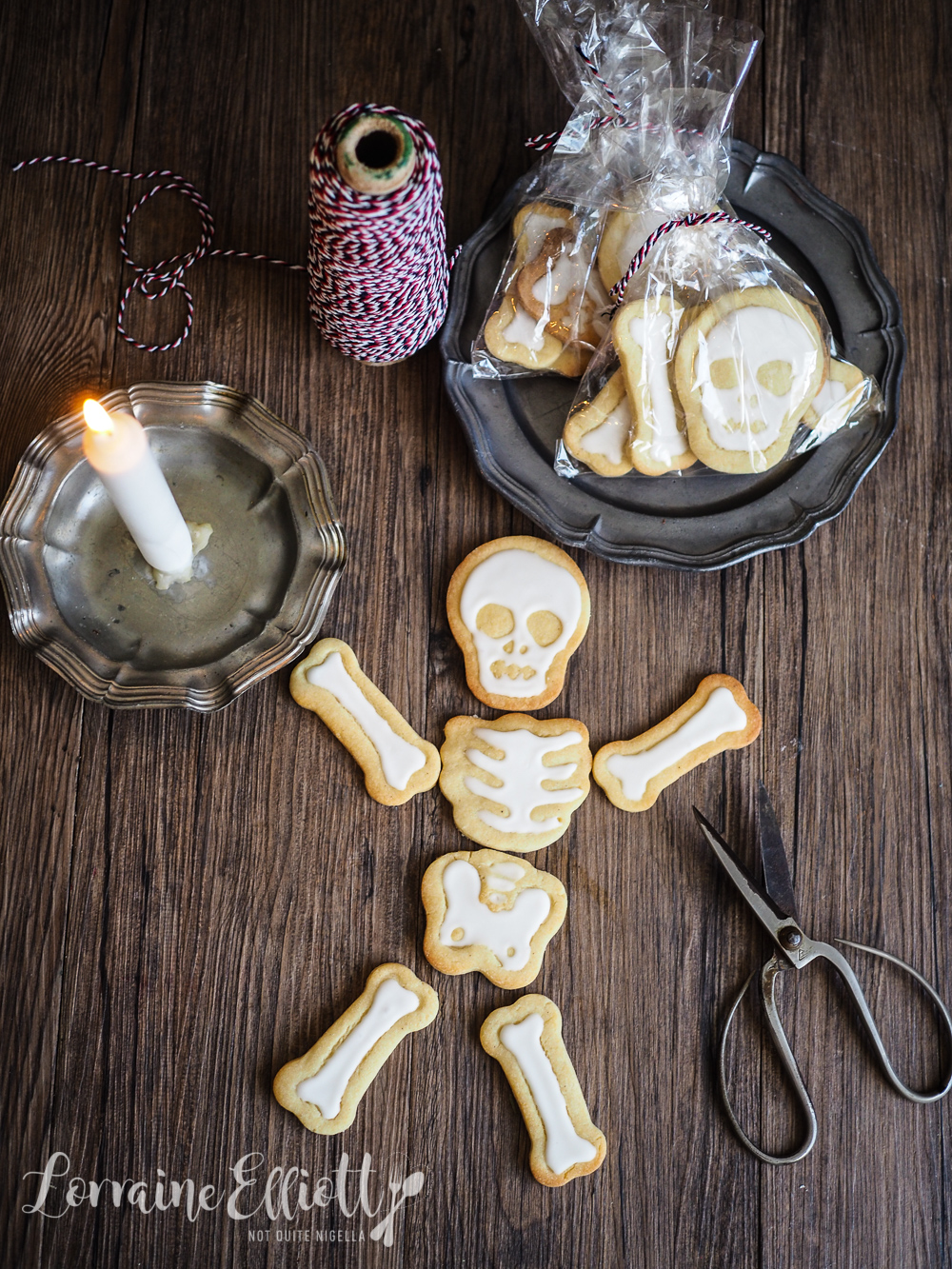 A rather scary thing happened to me while I was in Sri Lanka recently. I had arrived at a new hotel and I was unpacking my chargers, rearranging bags and sorting receipts. I had my backpack between my legs when I felt something strange...

I took my bag off and my lower thighs started to burn - a lot. It was a very specific pain. Like acid was being poured on my skin. I blinked once, twice, three times. What was happening to me? Why could I feel acid on my skin but couldn't see anything at all?

I watched with horror as blisters formed on my thighs in front of my eyes while the skin was burning and stretching to form the bump. My mind went crazy. Was there a ghost pouring acid on me? I've seen that in movies and quite frankly, pain like this makes you forget logic. You just simple want it to stop. Why was this happening and I couldn't see it?

I put cold water on the blisters careful not to pop them. It was painful and I didn't know how to treat it because I didn't know what caused it. I messaged Mr NQN about what had happened to me. I wondered if my camera battery had leaked acid because I was changing it at the time that it had happened. Is battery acid invisible? So many questions.

A few hours later Mr NQN had an answer for me. He sent me a link to a mysterious patterned beetle called a blister beetle, common in Sri Lanka. I must have accidentally crushed one maybe on the bottom of the backpack between my legs and it had imparted the caustic chemical they produce called cantharidin which had activated a little later. Which is why I couldn't see it but it had burned so much.

"I saw that beetle!" I told Mr NQN excitedly. I had noticed it because of its colourful appearance. I was so delighted to finally have an answer. Also a part of me was greatly relieved that it wasn't a ghost demon dripping acid on me too!

So tell me Dear Reader, has anything strange like that happened to you where you haven't been able to figure out the origin? Have you ever been bitten by a blister beetle? 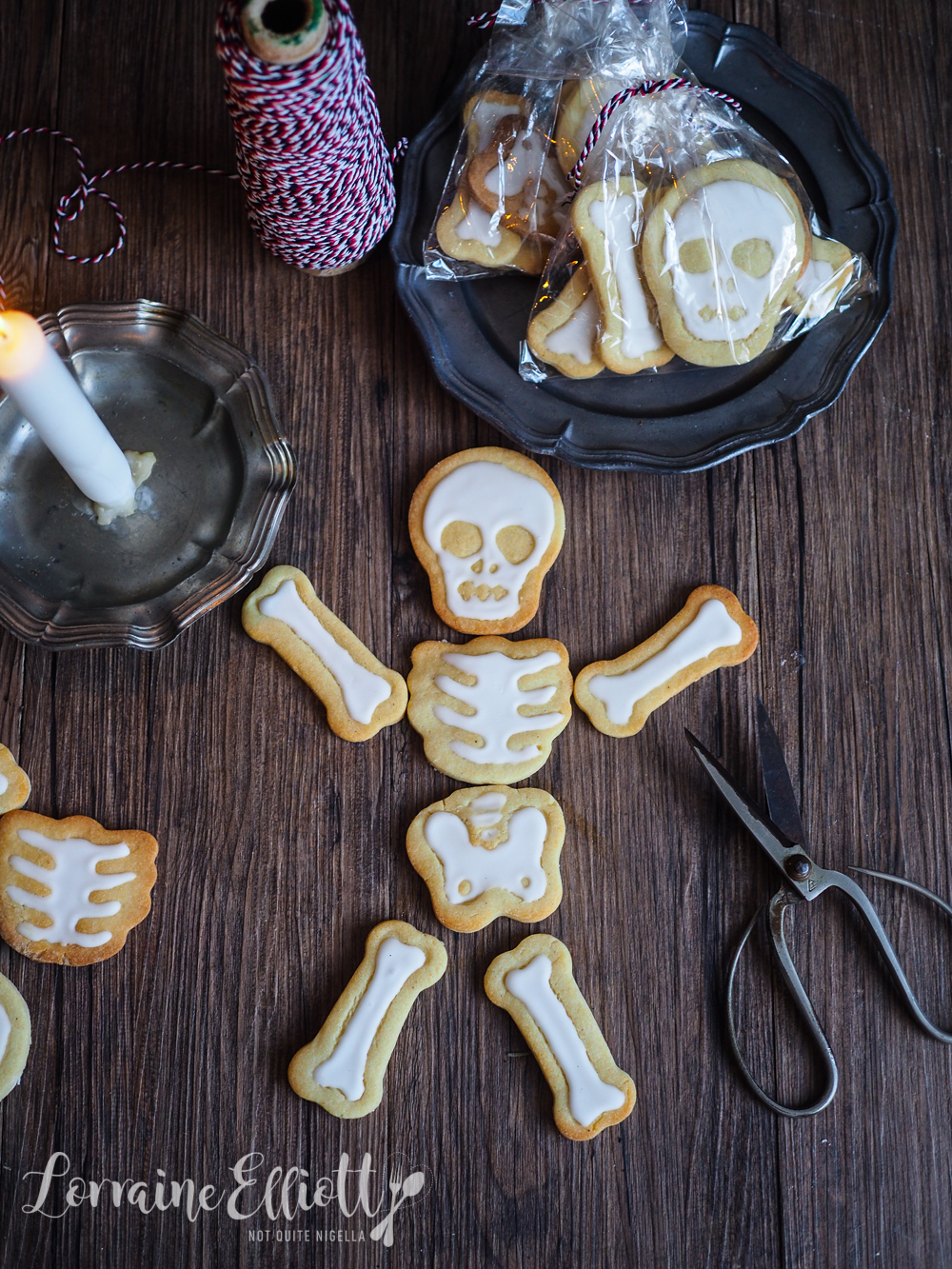 Step 1 - Using a beater attachment, beat the butter and sugar until pale. Add the egg, vanilla and lemon zest and beat until combined. Then on the lowest speed, add the flour until it becomes a pliable dough. If it is too sticky, gradually add some more flour (if it too sticky, the dough will spread).

Step 2 - Split the dough in half and roll each half out between two sheets of parchment. Rest in fridge for 1 hour. 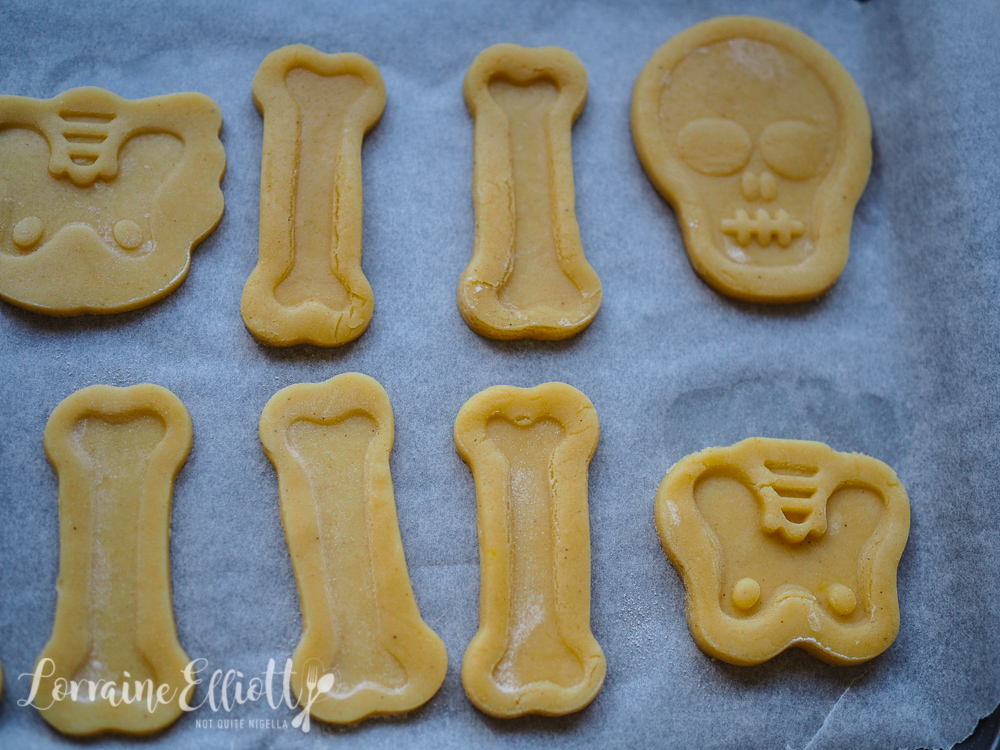 Step 3 - Line two baking sheets with parchment. Preheat oven to 180C/350F. Dip a cutter into the flour and then cut out skull, rib, leg and hip shapes. If you're using cookies with an indent, flip it over and press down firmly but gently to make an imprint. You want the imprint to be distinct so that it can hold the royal icing in the crevices thus easily creating the pattern. Place back in the fridge for 20 minutes or freezer for 10 minutes (this helps the cookies keep their shape). Then bake the cookies for 10 minutes or until baked through. Cool completely. 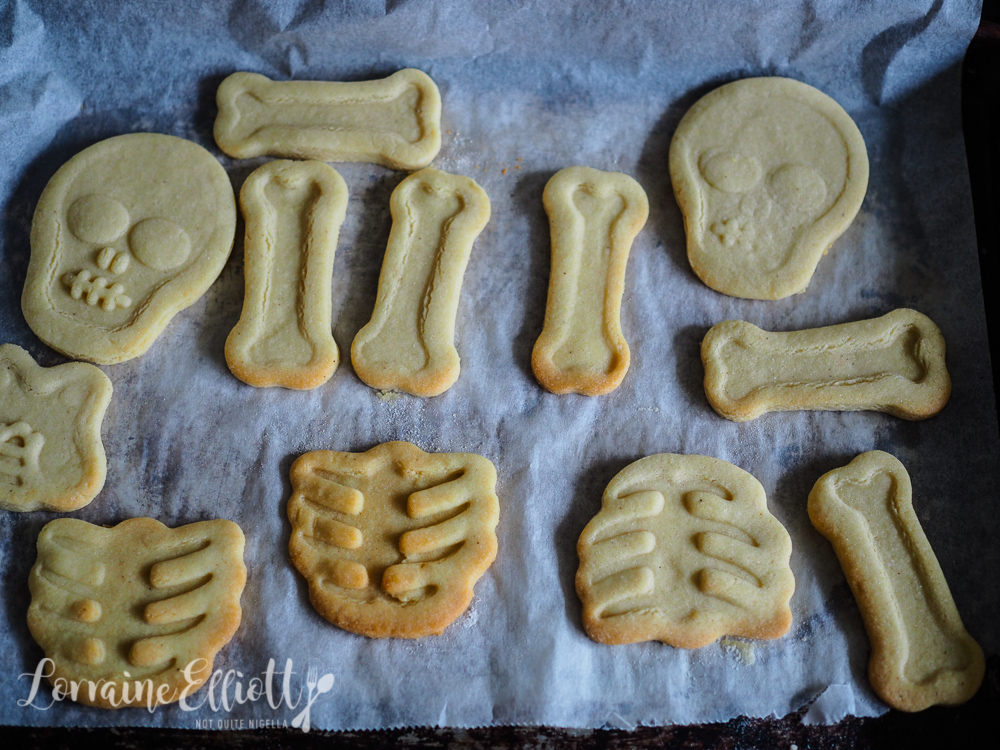 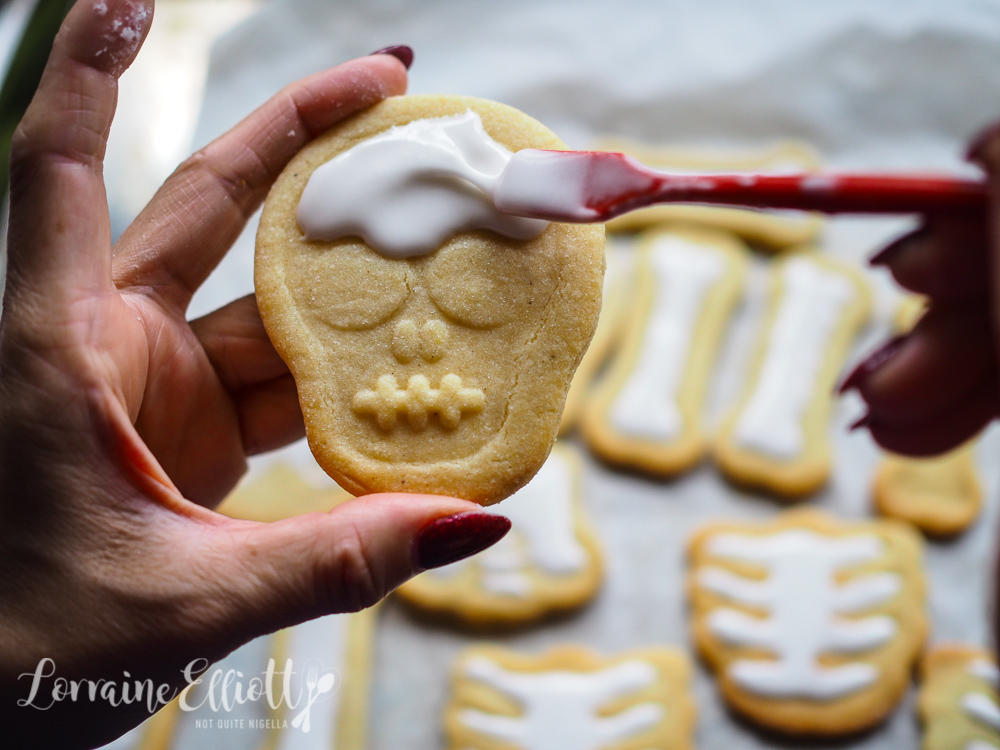 Step 4 - In a food processor, place the icing sugar and process until all lumps disappear. Add the egg white and whizz, then add just enough lemon juice to make it liquid enough to pool in the crevices. I decant some and then use a little fondant tool to scoop it into the holes. Repeat for all the cookies (get comfortable, sit down and don't bend over the cookies because it hurts your neck and back!). Allow to set completely. Bag dem bones up! 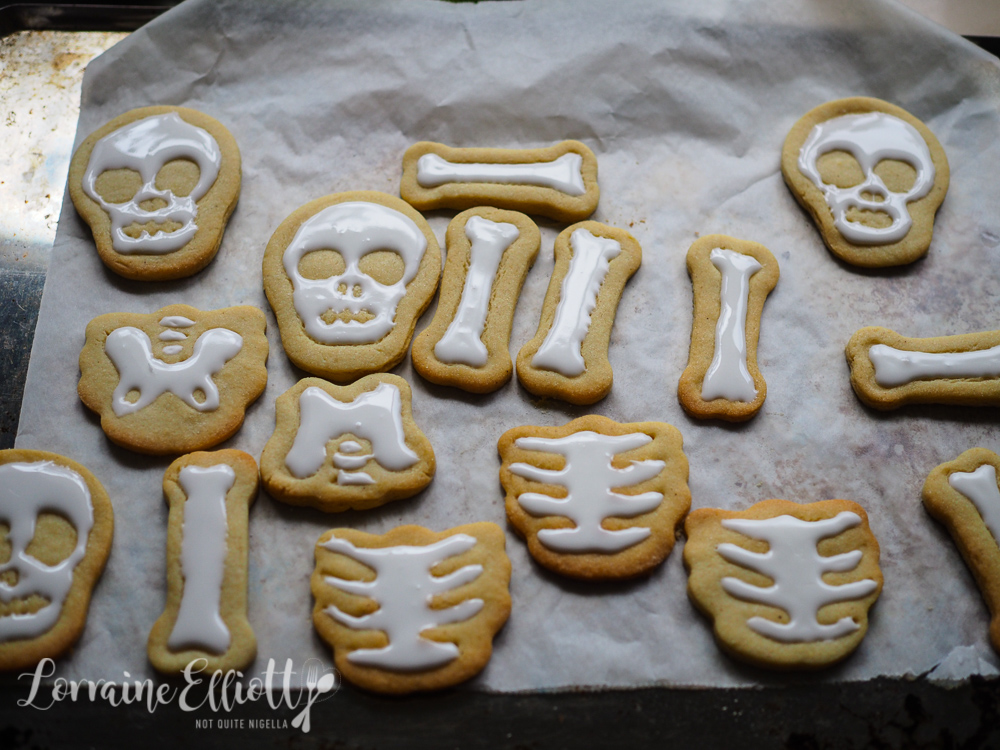 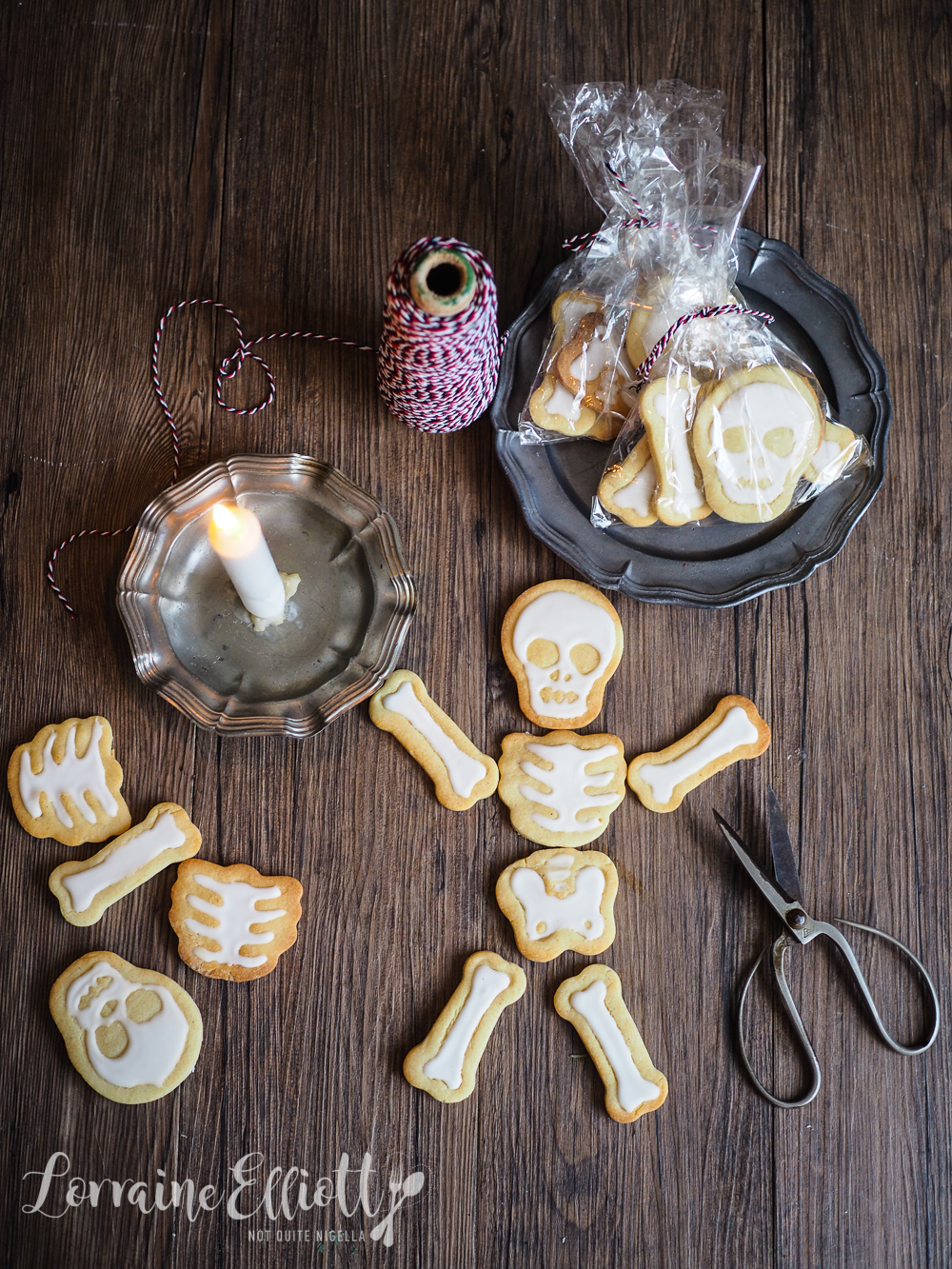