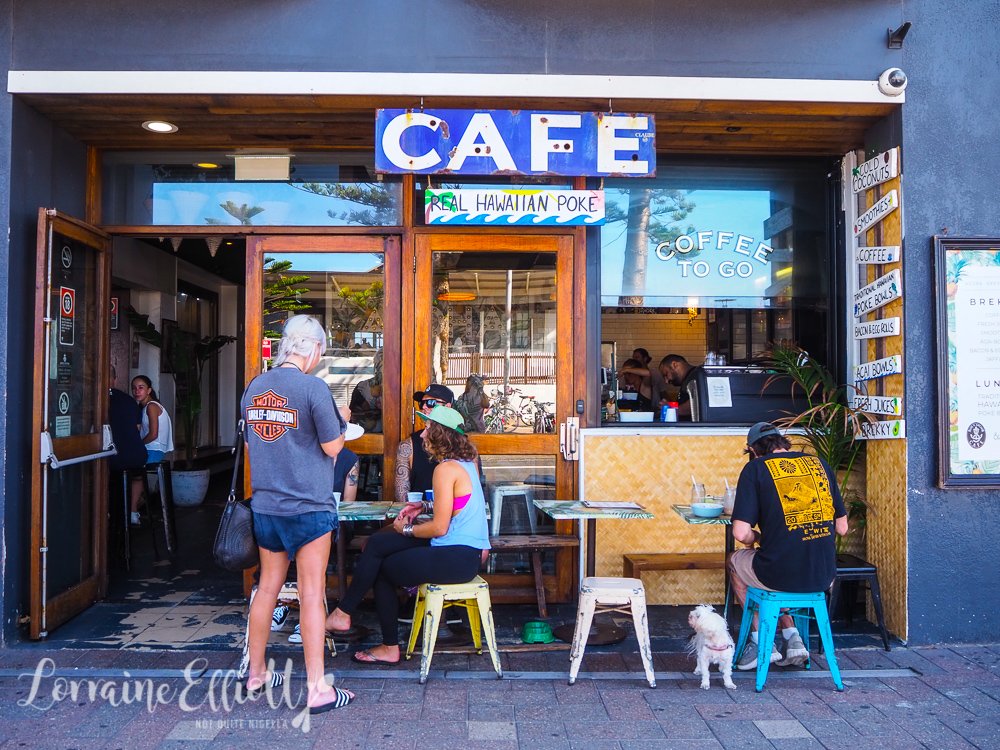 Native Hawaiian China West has one aim: to introduce Australian to real poke through her business Aloha Mate. Not poke interpreted by others but the real stuff from her homeland of Hawaii. Poke translates to "chopped" and it is made up of small cubes of raw sashimi grade fish mixed with a flavoursome sweet soy or chilli soy sauce, seaweed and sesame seeds. And Aloha Mate's could very well be the most authentic poke in Australia.

China, or Chai as she is known, explains what poke (pronounced po-kay) means to Hawaiians, "I believe Poke is the perfect representation of the Hawaiian culture today - the dish is rooted from the island however also influenced from other surrounding cultures. Known as the Melting Pot of the Pacific, Hawaii is truly unique as I don't feel there is anywhere else in the world where locals are as ethnically mixed nor embrace cultures the way Hawaiians do." 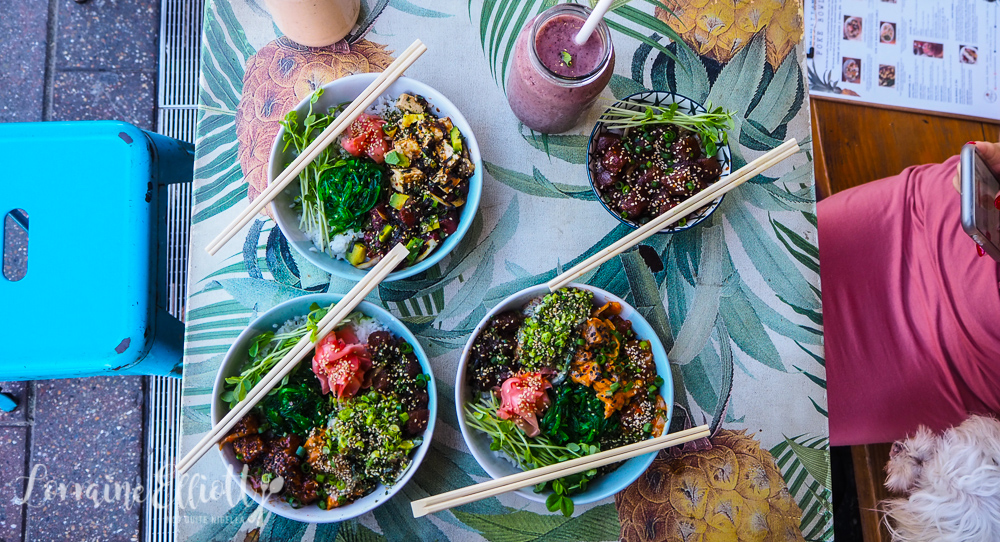 She's proud of her Hawaiian heritage, "I'm lucky to have not just one but both parents of Hawaiian descent. Most of my friends don't have any Hawaiian in them as our race has sadly declined rapidly in the past two centuries, now majority of Hawaii has Asian descent (including myself, as my father is part Chinese). My grandfather, Leroy Keawe Pukahi, was a pure blooded Hawaiian and one of a few hundred left. Most people have never seen a pure Hawaiian... I was raised by one."

She has also used family recipes in her menu. "My recipes are a mix of my own, my family's, and also a good friend of mine, Cory Vidinha, who owns my favourite Poke shop in Hawaii, Hibachi. Every Poke shop is different in Hawaii, every one has their own style of Poke- I guess I'm the same now too." 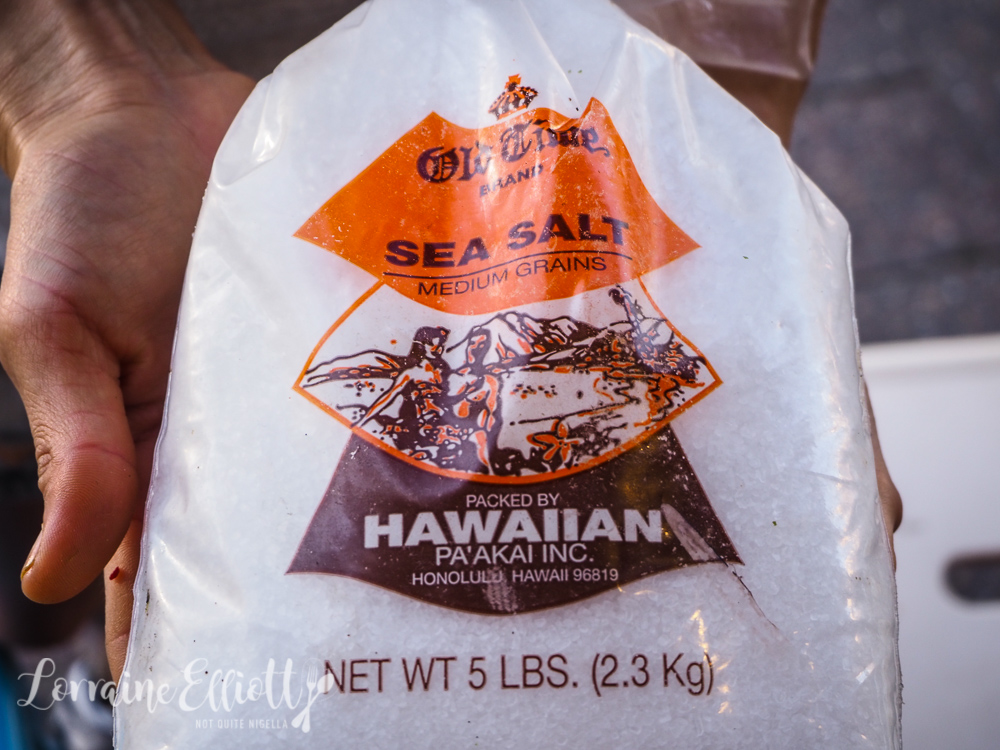 So what makes a great poke? "What makes real poke to me is the sauce or the marinades. Given that the fish is fresh it honestly just comes down to the unique flavours of each Poke that makes you drive that extra 20 minutes to get it from your favourite hole in the wall spot."

Chai imports dried Ogo from NOH foods in Hawaii and salt from Hawaii and as many components as she can. Even the lamps are from Hawaii's Big Island. The Aloha wall inside is a hit for selfies and Instagram. 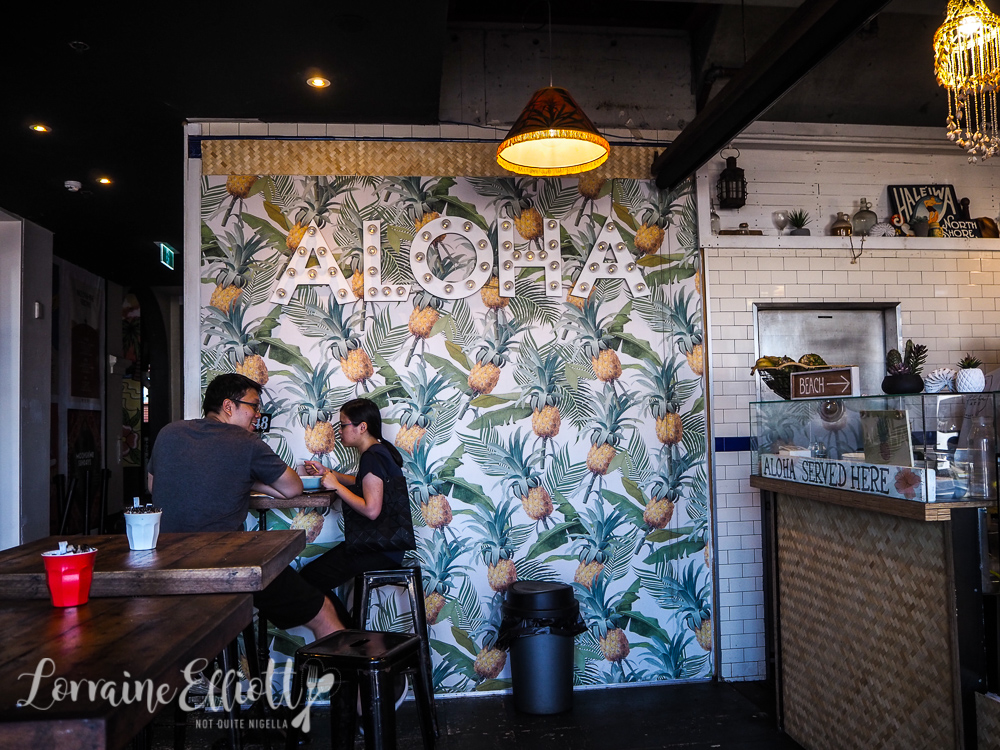 Aloha Mate is located on the North Steyne and is part of the Steyne Hotel at the Rope & Anchor cafe. She and her partner Mike Hill take care of the smoothies, juices and poke. They always offer people a taste of poke in case they are unfamiliar with it and that is usually enough to convert someone into the joys of poke. 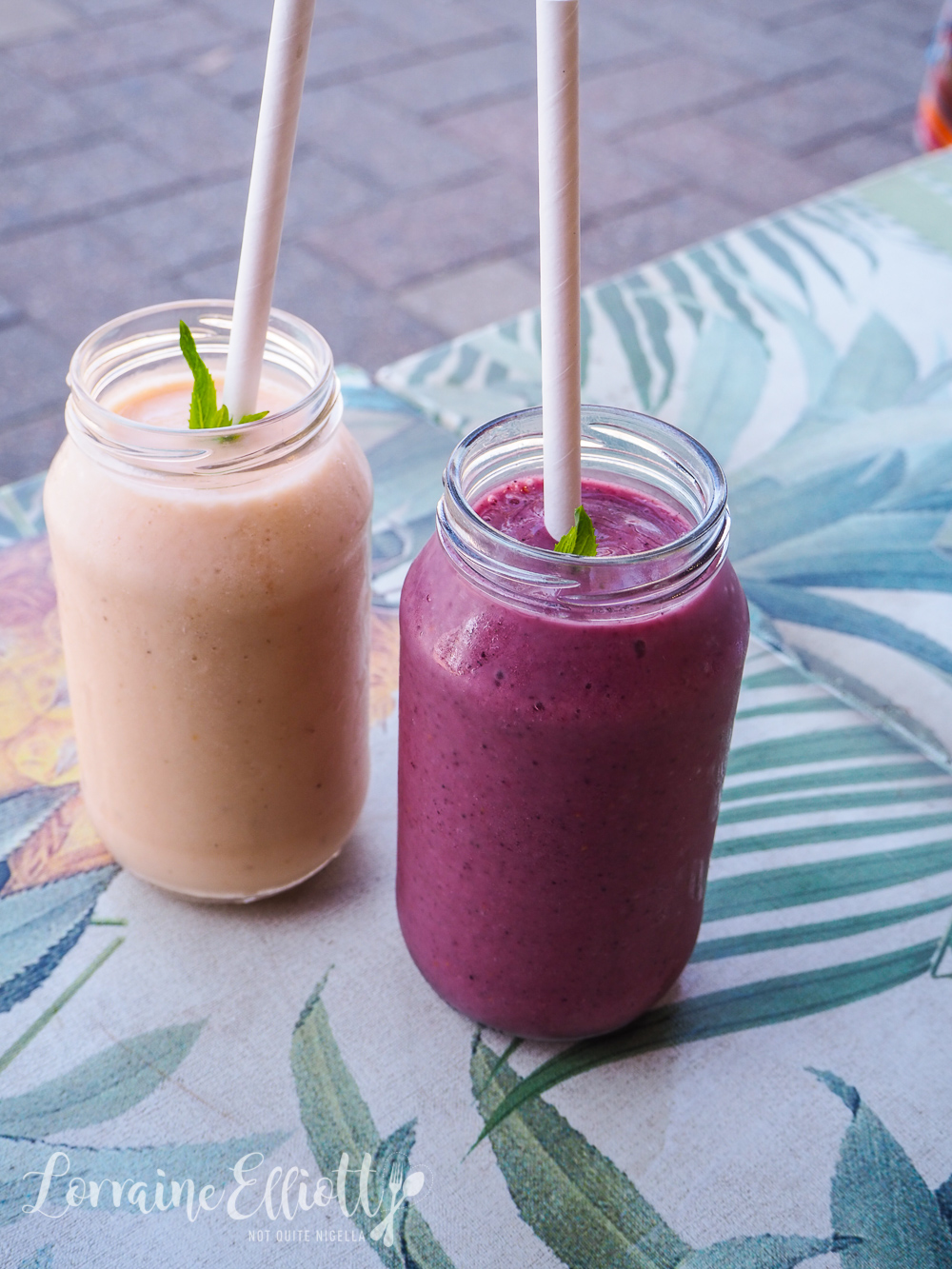 We start with smoothies - a Sunset Beach which is my pick with papaya, banana, pineapple, coconut yogurt and coconut water. Mr NQN likes the slightly tarter best selling Pray 4 Surf with mango, mint, banana, mixed berries, maca, coconut oil, coconut water and nut milk. Other smoothies have Hawaiian names like Road to Hana and North Shore (the Oahu one, not the Sydney one ;)). 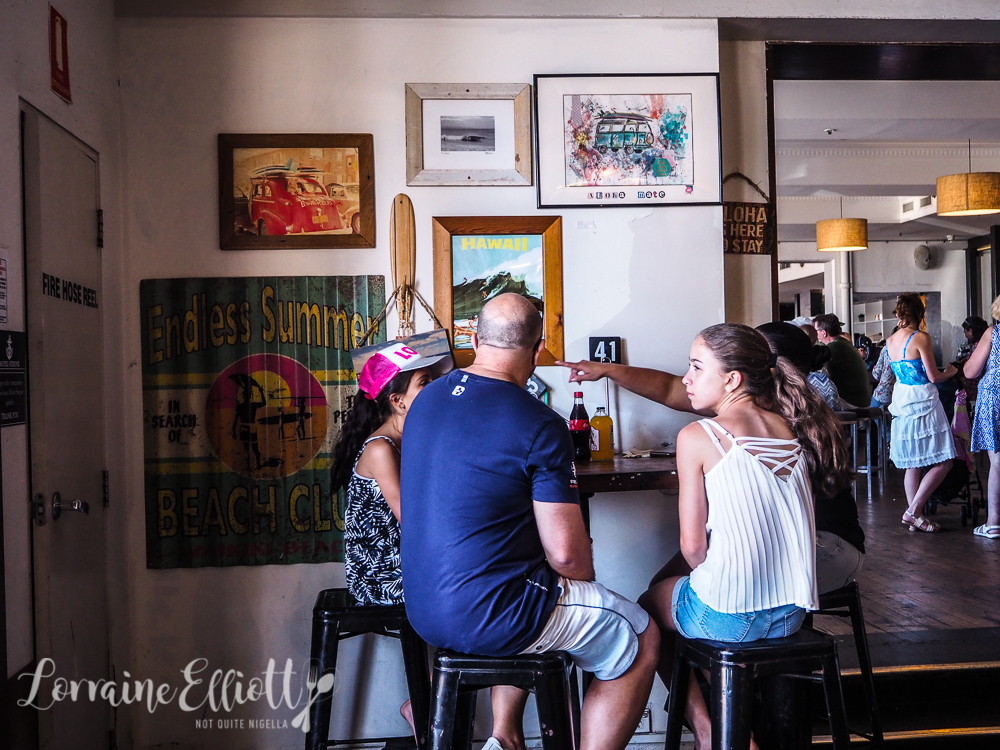 The poke bowls are $14 for a small or $17 for a large and you can choose up to two pokes for each bowl. China's poke bowls are simple - with seaweed, rice and poke. She knows that in Hawaii you buy poke fish by itself. Among her patrons are the toughest judges-Hawaiians visiting Sydney or the Hawaiian surfers that recently converged upon the small cafe for a taste of home during a recent surfing competition. 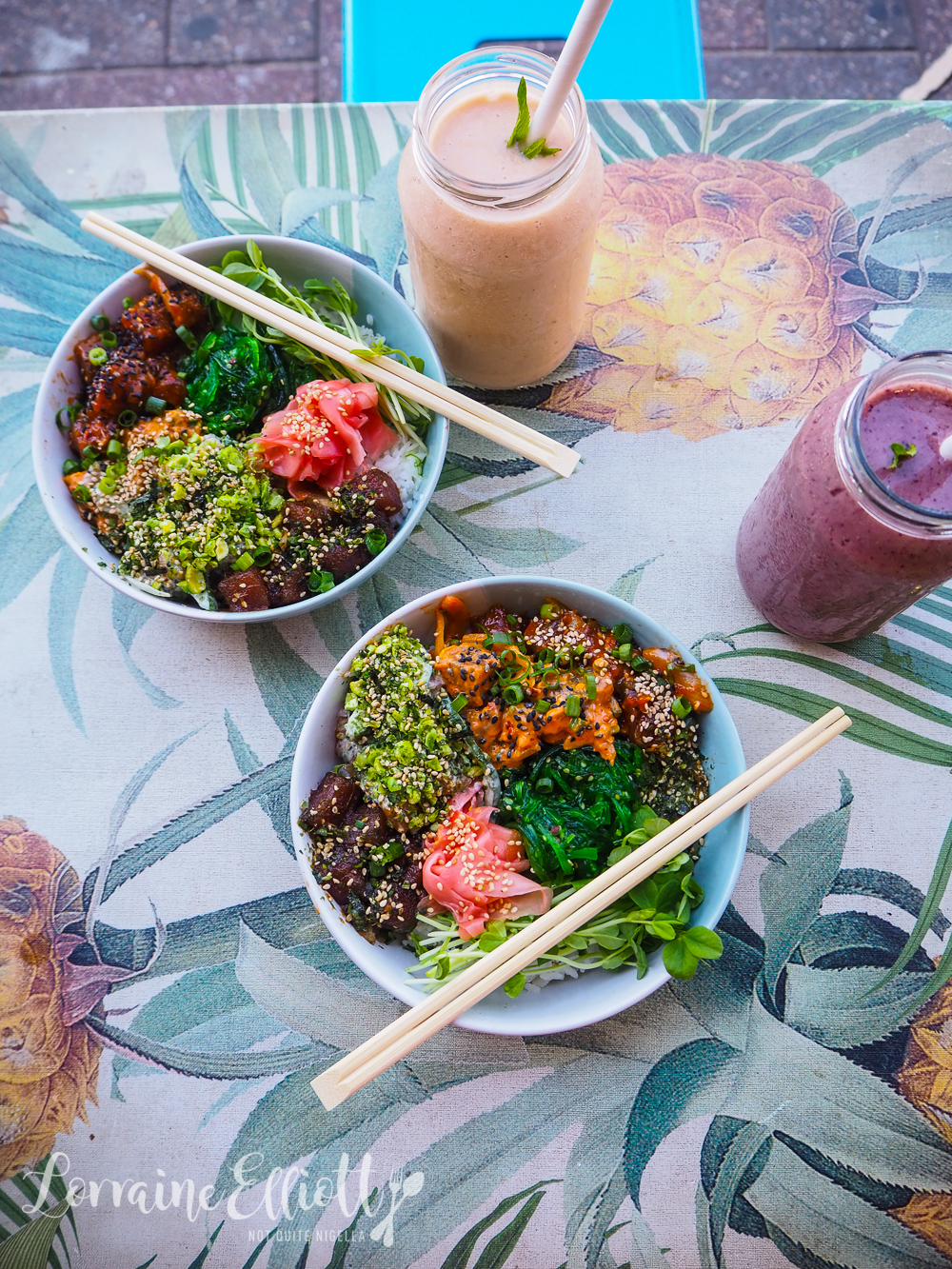 We try a large bowl with a bed of rice, seaweed and four types of poke. There's the Oahu Grown which is salmon, white and green onions, sesame seeds and a chilli soy sauce that is nothing short of fantastic and it's perhaps my favourite of all of them. Even with the white onion it's never too strong and I feel like I'm back in Hawaii. Mr NQN likes the Cali Bowl with its hit of wasabi with salmon, wasabi mayo, cucumber, white and green onions, masago (roe), furikake, sesame seeds and sweet soy-this also has a nice crunch to it from the furikake and seeds. 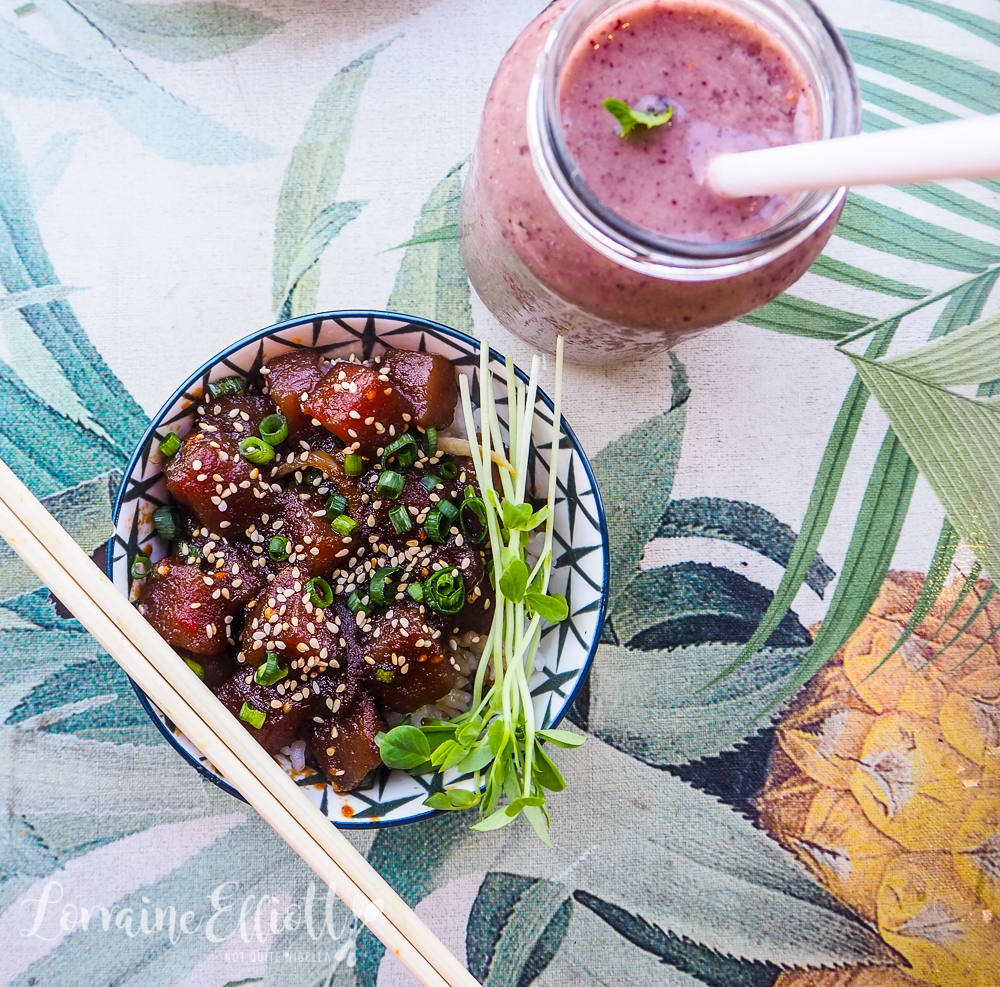 The Paniolo is also one of my picks-this is fresh tuna cubes in a sweet spicy sauce, white and green onions, masago and sesame seeds is heaven. Although I love salmon, it's the tuna poke that really appeals to me because that's what I think of with poke and the Kailua Sunrise with tuna, secret spicy mayo, white and green onions, masago and sesame seeds also appeals for its simplicity and balance of flavours. You can even ask for more sauce for your poke or rice which is nice because the rice gets so much flavour from the sweet or chilli soy sauce and the sauces are really superb here. 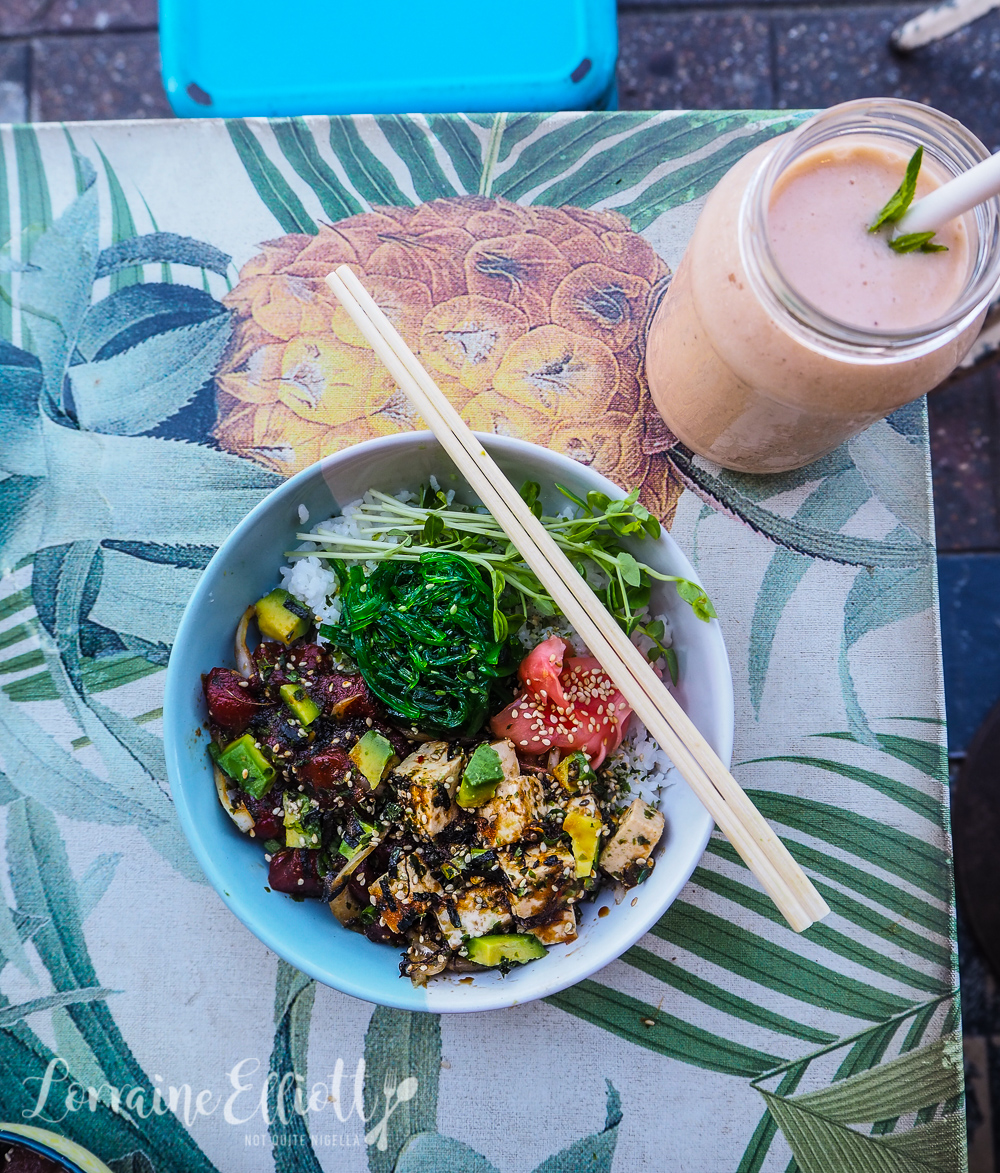 Vegans have two options - there's a Manoa tofu which is actually really, really good. The tofu is marinated so that the flavours go deep. It's then served with white and green onions, avocado, sesame seeds and a sweet soy sauce. But the revelation for me was the vegan Pono Bowl made of a secret ingredient. Mr NQN guesses that it's a fruit or a choko and I make my own guess of a certain fruit that turns out to be right (I won't spoil the surprise, you'll have to try it and guess it yourself ;) ). It looks like tuna and it's marinated so that the flavours penetrate it and it is served with white and green onions and sesame seeds and a chilli soy. Both vegan bowls are such powerhouses of flavour that you don't feel like you're missing out on anything. 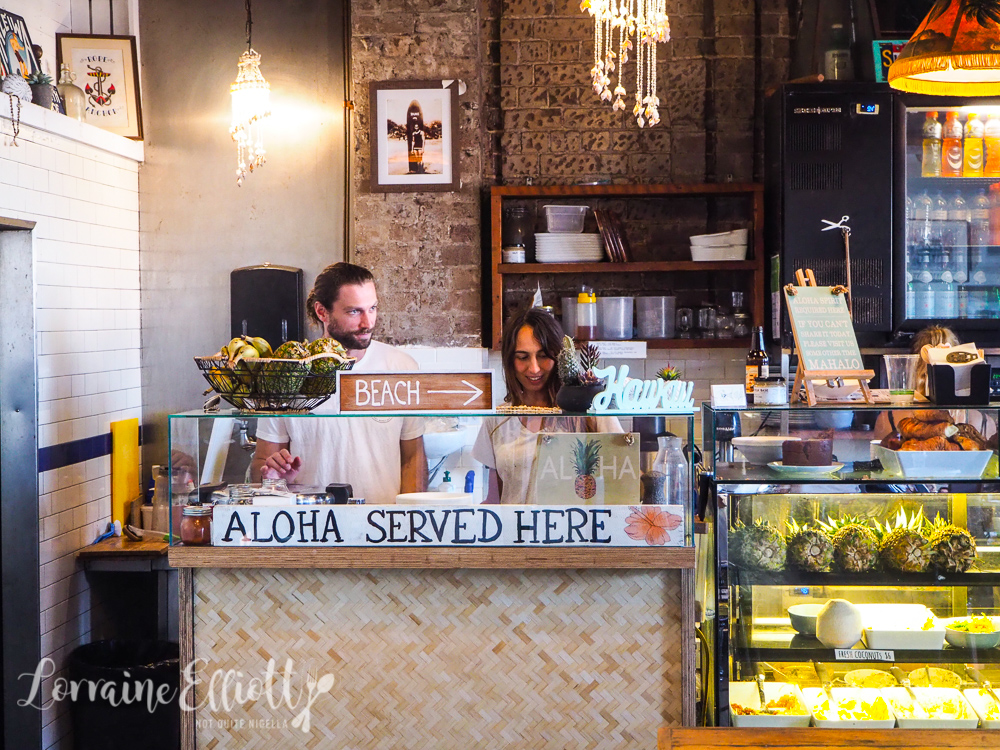 I ask Chai if she has plans to start serving other Hawaiian goodies like Loco Moco (a post surfing staple) or Spam musubis. She's not sure how the market will respond to that although she obviously misses Hawaiian food and culture being so far away. "I recently lost two grandparents in the past 18 months which has been difficult especially being away from Hawaii. However, being in the kitchen and cooking the meals they fed me as a child is my way of not only preserving their memory but also my Hawaiian culture in my new home. I am very proud to be from Hawaii and I hope that both my grandparents and my home are proud of my Poke too."

So tell me Dear Reader, do you like poke? And what is your heritage and are you proud of it? Have you ever been to Hawaii? 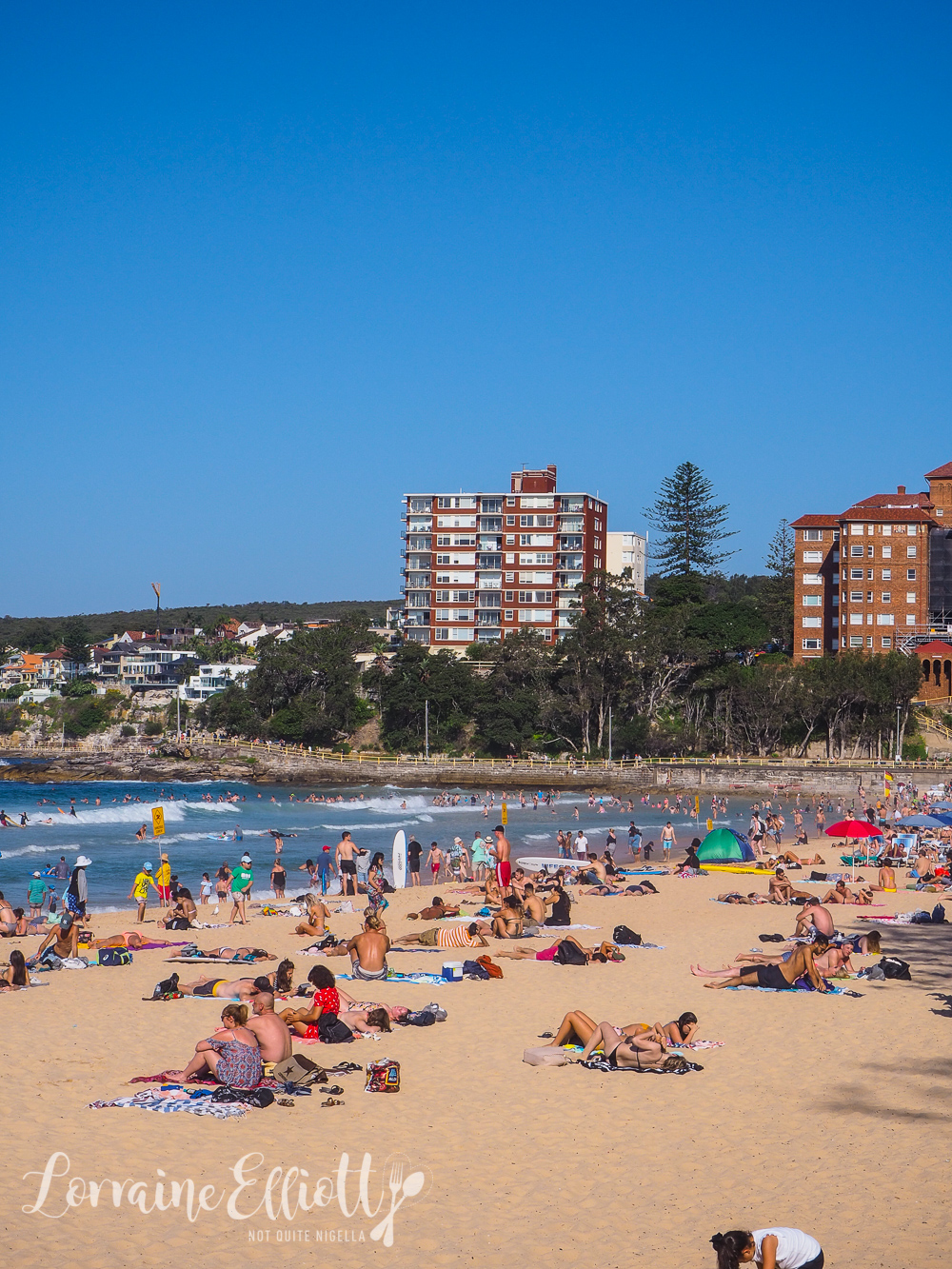