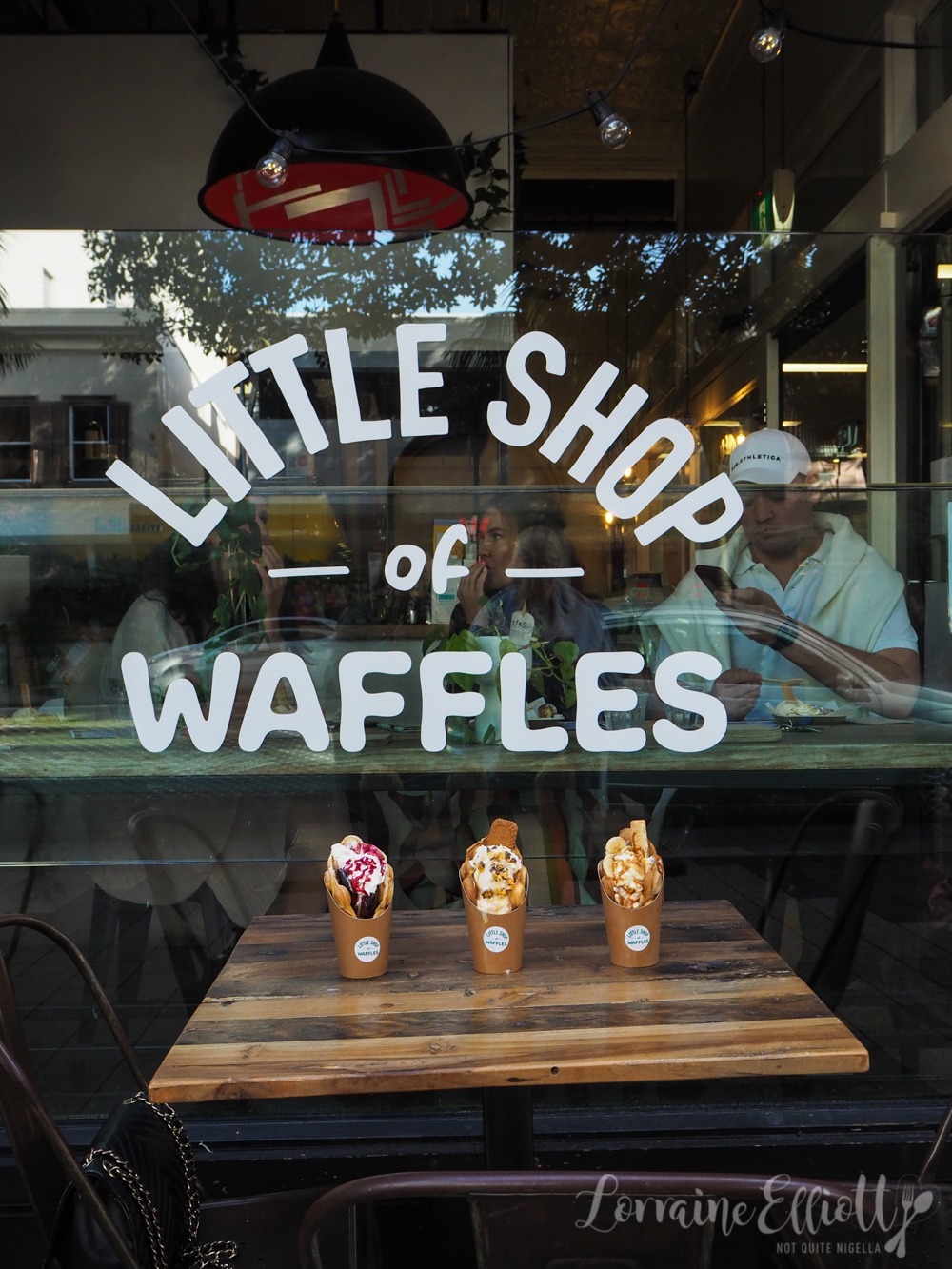 Little Shop Of Waffles is a shop dedicated to the bubble waffle (and croffle). Located on the Corso in Manly these bubble waffles are served sundae style with scoops of gelato and sauces. 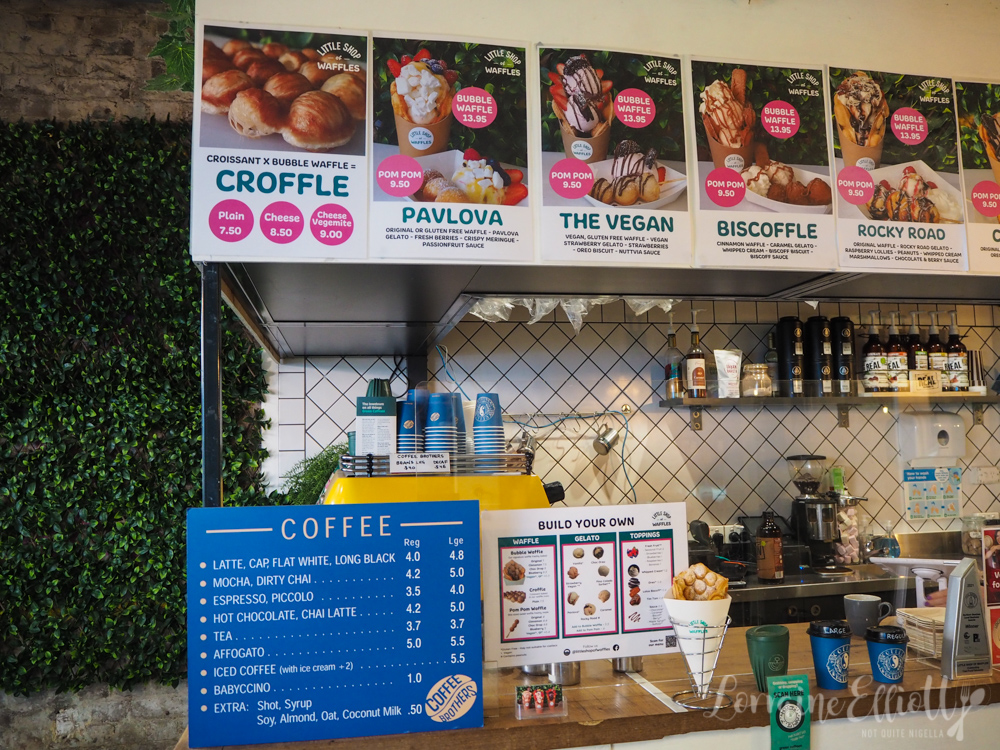 "Where is it?" Sammie and I say to each other as both of us, directionally challenged, try to navigate our way to the Little Shop of Waffles from the carpark (spoiler: it's literally a 1 minute walk). But where sense is absent, using your nose prevails and we follow the scent of waffles cooking that leads us to the shop. Little Shop of Waffles specialises in bubble waffles. Bubble or egg waffles are waffles cooked in a special waffle pan that create bubbles so that the bubbles resemble enormous bubble wrap puffs. They are crispy on the outside and spongey on the inside. Described as a hybrid of a cookie/biscuit and sponge cake they can be filled with fruit, chocolate where each ball has a soft or gooey surprise or the batter can be flavoured with spices like cinnamon or they can be plain. 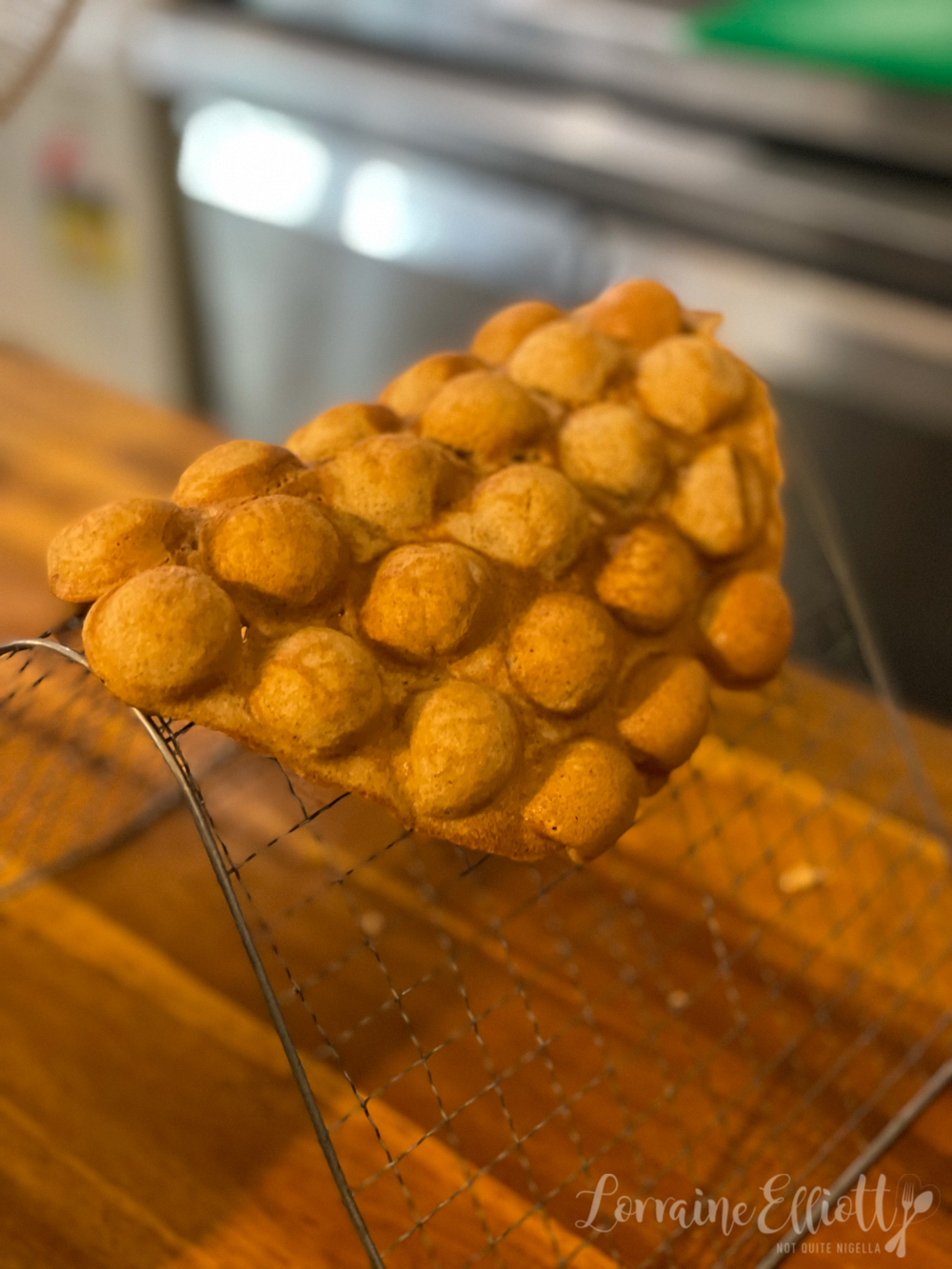 It was 2019 when Irene Zalami and her partner Saskia Schuck and their friends and couple Naomi Mourra and Alex Potter found themselves back in Australia. All four women had left their corporate jobs in London and decided that they wanted to create something in hospitality in Australia. They came up with the idea of a bubble waffle cafe taking on a Hong Kong street food favourite and bringing it to the Northern Beaches. They wanted to be located on the busy Corso too. "I wanted to create memories just like the ones I had," says Irena. They opened up on New Year's Day 2021 during the Northern Beaches lockdown. 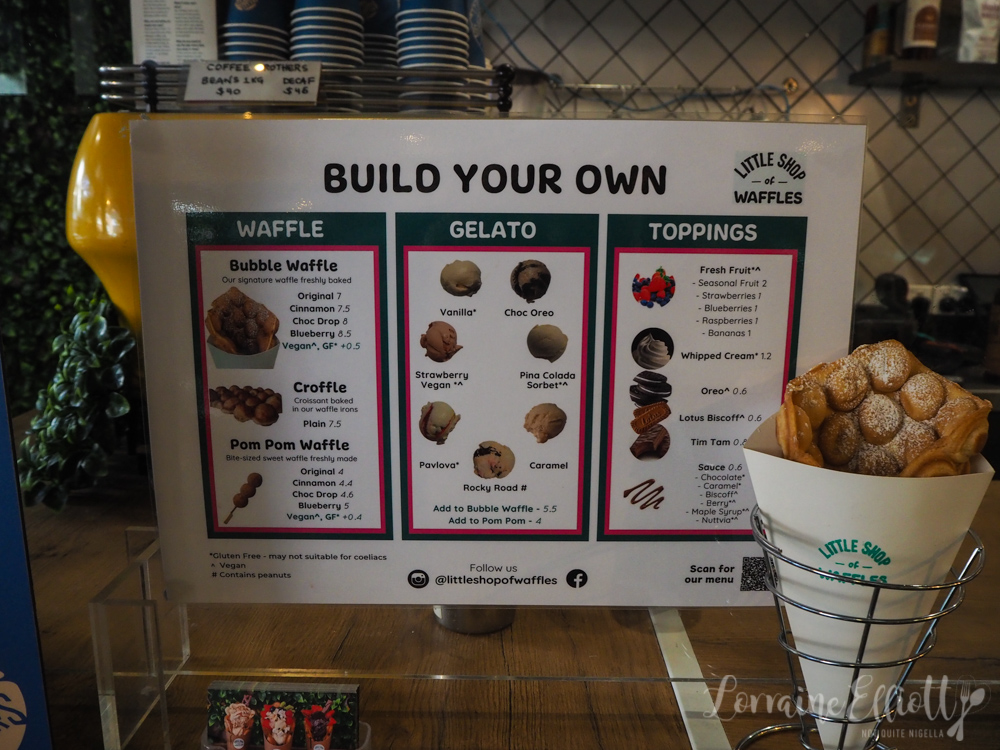 Irene is the only one of the four that works full time at the shop and she shows us the two machines that their bubble or egg waffles are made on. Their batter is a mix of flour, eggs, evaporated milk and sugar and there is also a vegan/gluten free option. The most popular flavour is the Pavlova with pavlova gelato, meringue and passion fruit drizzle followed by the Rocky Road but today we are trying some of the winter specials. The waffles are served in little paper cups with forks so that they can be eaten while walking. I find it easiest to pull off the "balls" and then dip these into the ice cream and sauce. The recipe for the batter was created by watching countless youtube videos and refining the recipe over and over again to arrive at the current one. And there's a little tip for making the waffles crispy-they hang them in front of a fan to crisp them up. 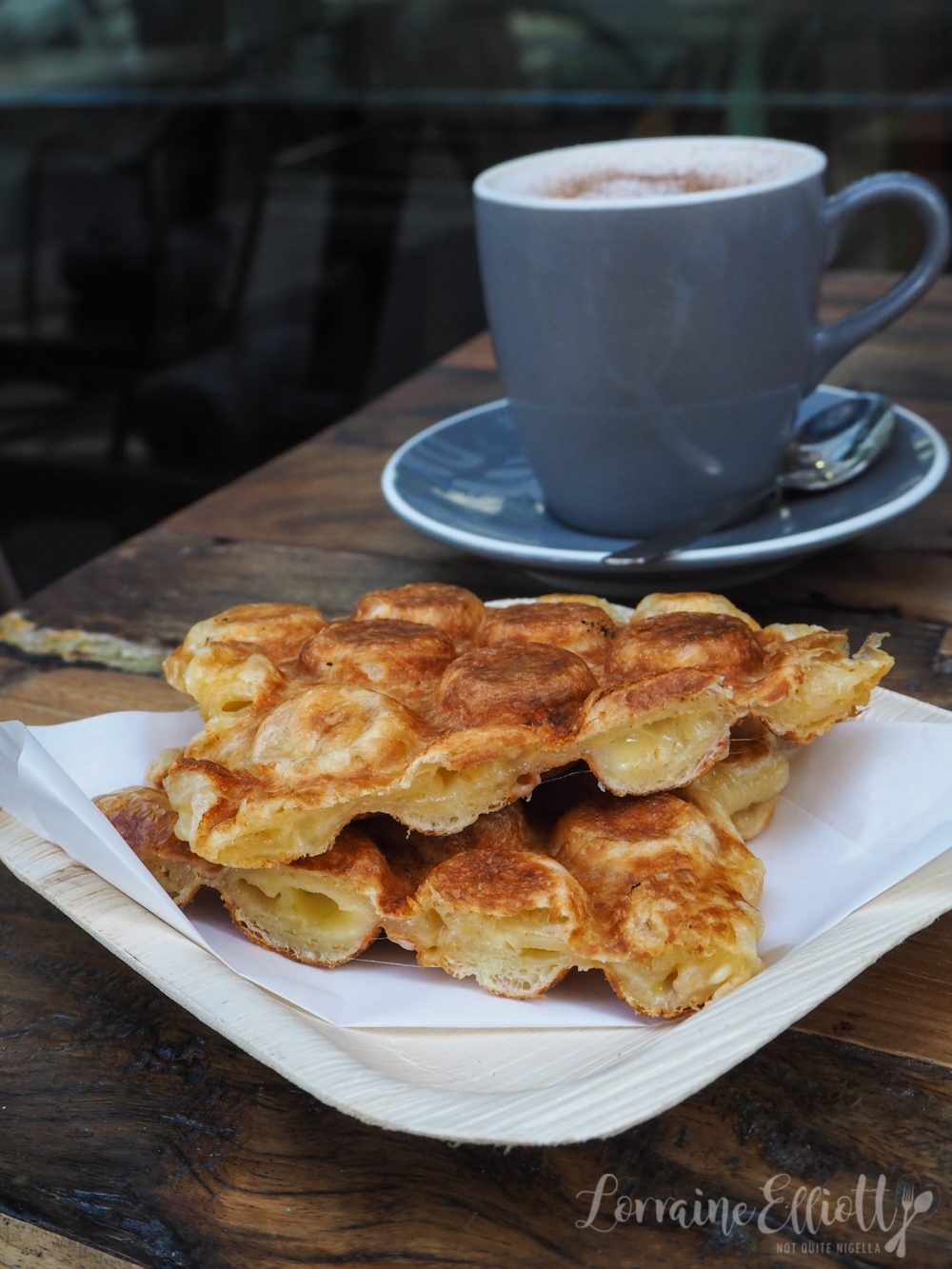 While most of the menu is sweet, they have a few savoury options by the way of a croffle (croissant waffle). A croffle is deliciously crispy version of a croissant where an unbaked croissant is cooked in a waffle iron. They can be plain or stuffed with cheddar cheese. The cheese is nicely melted in this and the buttery croissant dough is crisp on the outside.

It's onto the waffles. We did try a few of the waffles and I definitely recommend building your own. There's chocolate filled, blueberry filled and regular and I liked the chocolate filled and cinnamon waffles the best. And if you want something a bit more snack sized you can try pom poms which are three waffle balls on a skewer that can be served with a scoop or two of gelato. 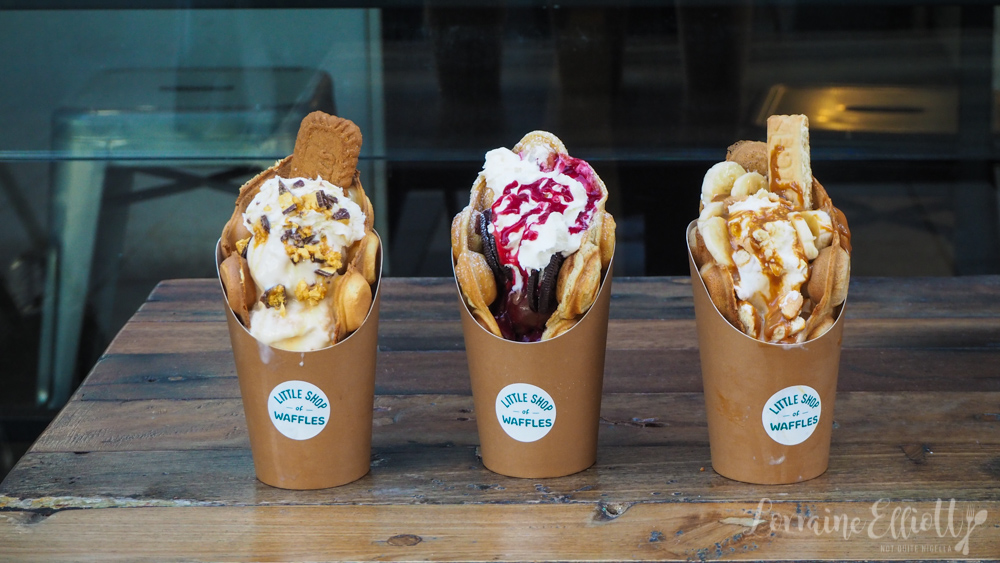 The Biscoffle is a cinnamon waffle topped with caramel gelato, Biscoff sauce and a Lotus Biscoff biscuit. I would have loved a bit more Biscoff sauce as this is the thing that really brings it together and the caramel gelato is really for those that really love their gelato sweet. For me, I think I prefer a less sweet gelato for this but I'm not a massive sweet tooth. 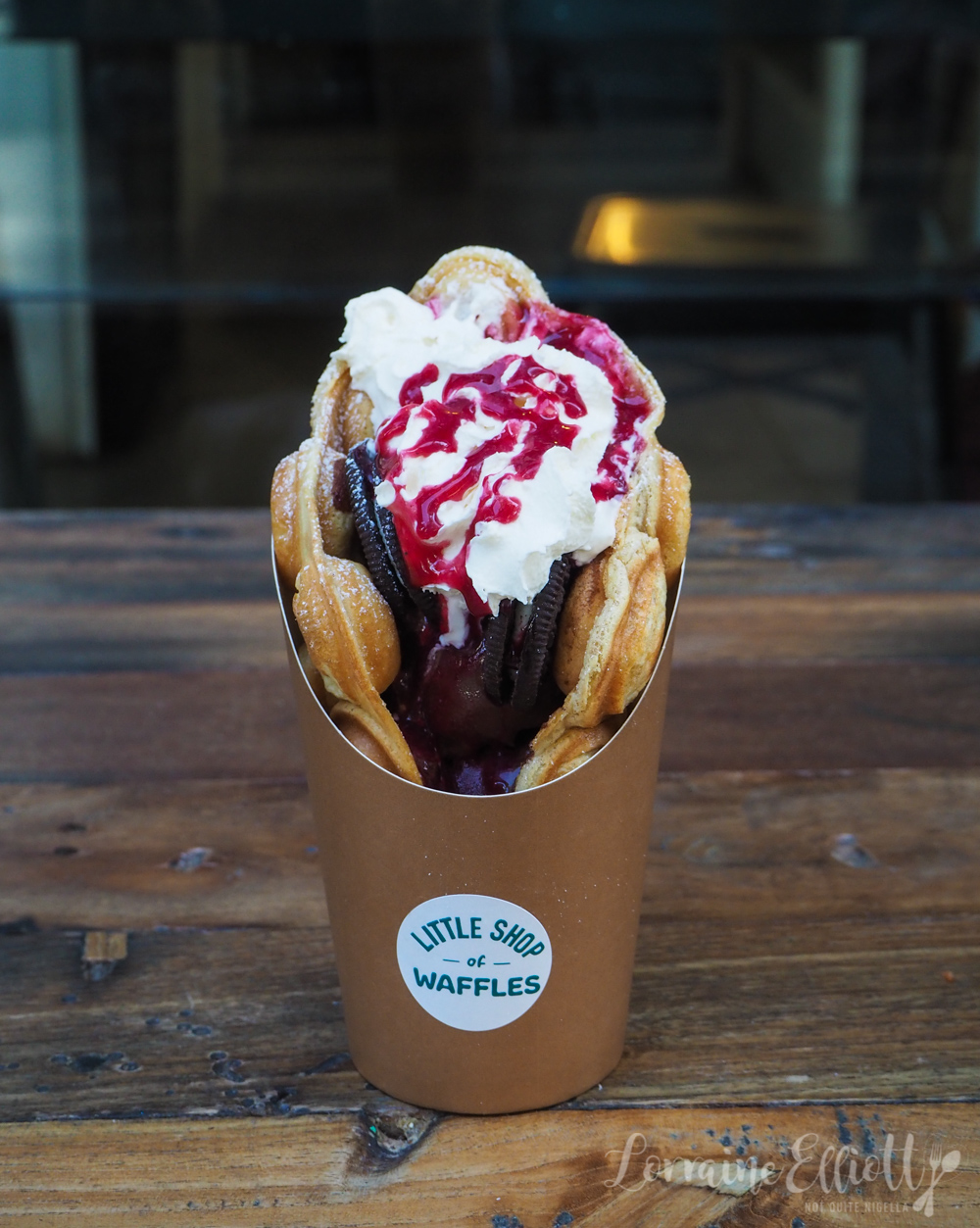 The Black Forest waffle is one of their seasonal winter waffles and has a vegan, gluten free bubble waffle, chocolate sorbet gelato, Oreo biscuit, berry drizzle, whipped cream (optional for vegans), dusted in icing sugar. You do have to dig down for the chocolate gelato and the vegan waffle is actually quite a good copy of a regular one with a teeny aftertaste. 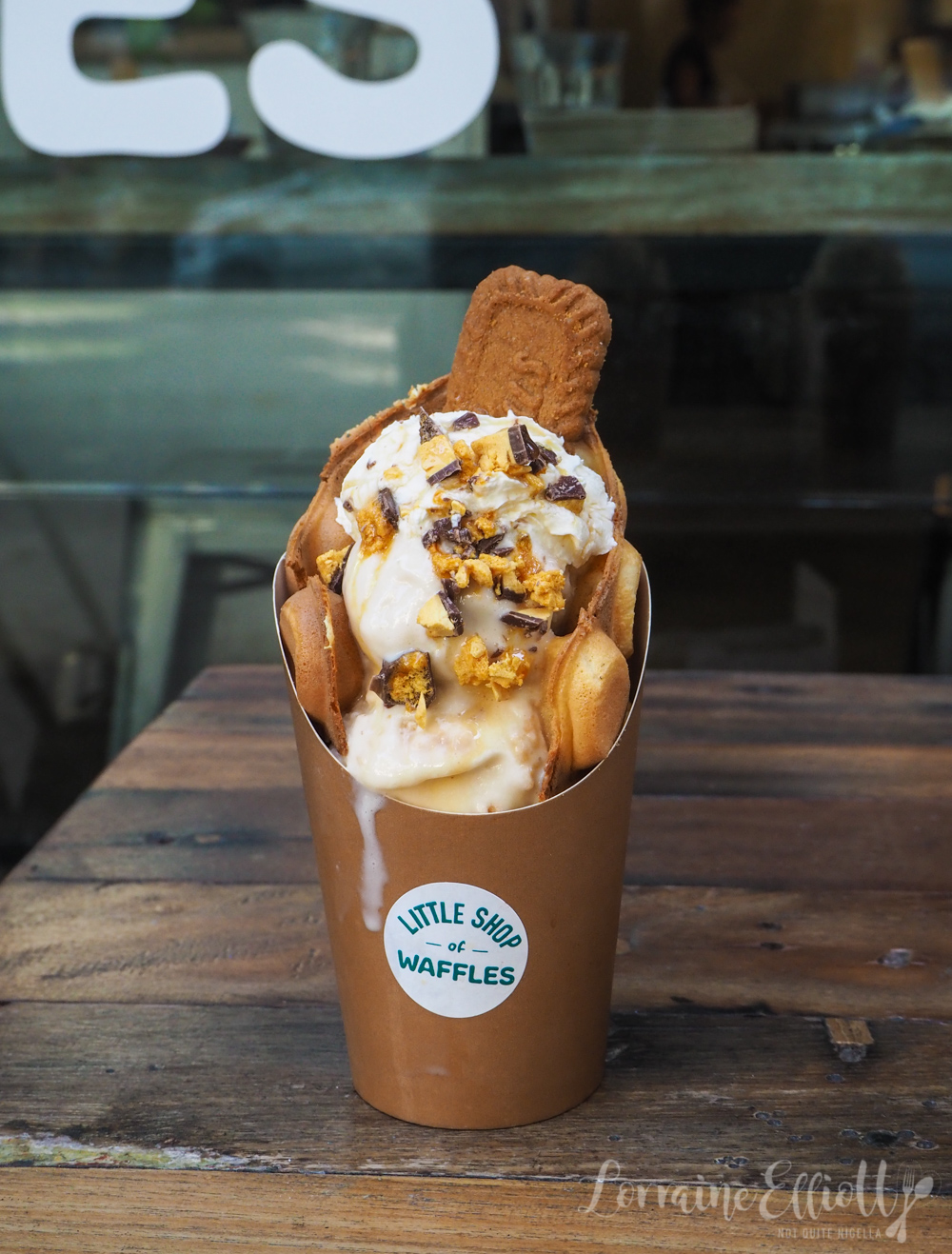 My favourite part of the fig and maple waffle is the cinnamon bubble waffle. This is paired with a caramelised fig gelato, Biscoff biscuit, choc honeycomb crumble, pure maple syrup and cinnamon sugar. Again the gelato is very sweet and next time I think I'd probably build my own waffle and take it home and add my own favourite ice cream. 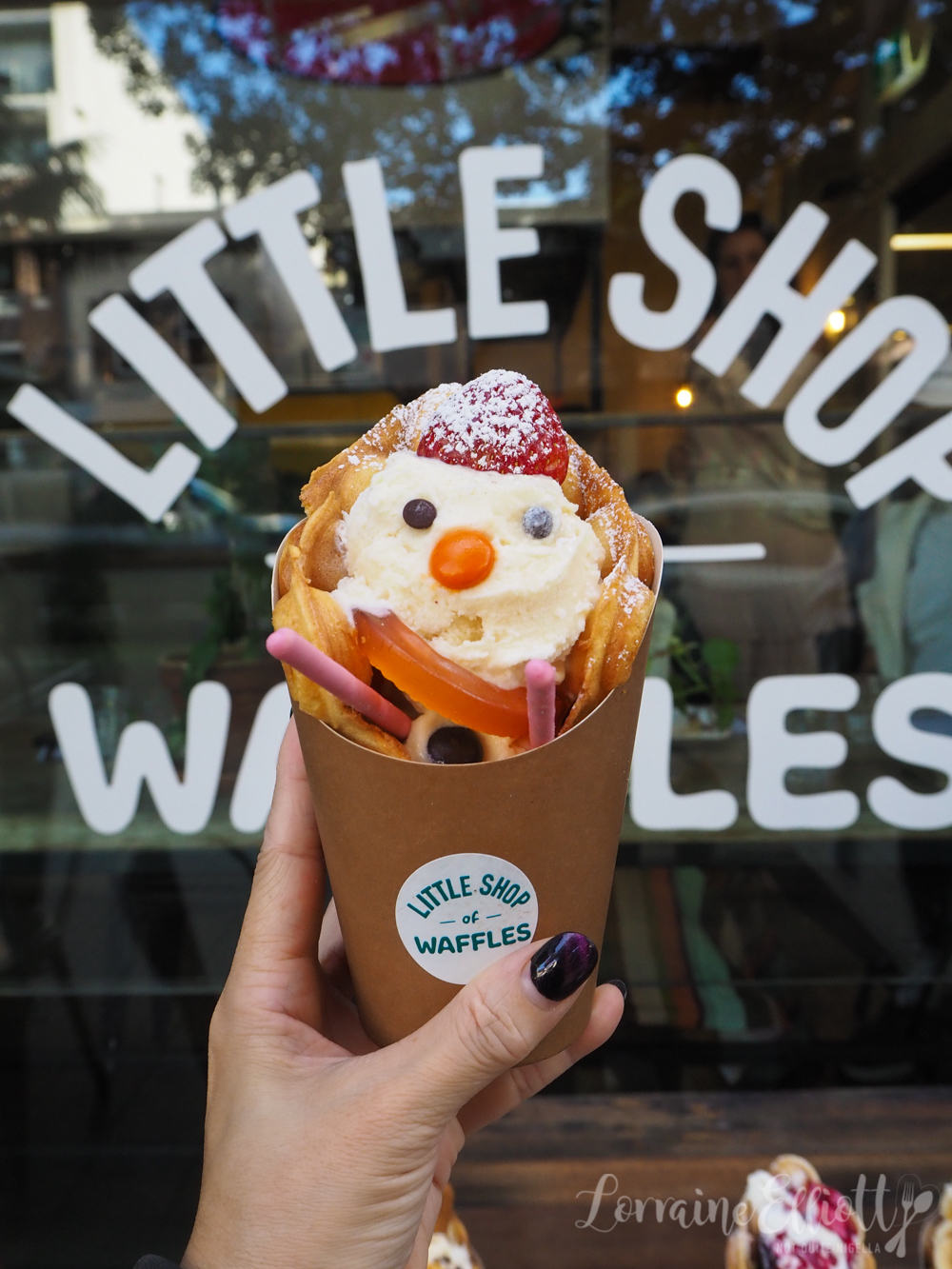 The Snowman waffles is a kid's dream with a selection of lollies and gelato. There are two scoops of vanilla bean gelato, strawberry pocky hands, m&m buttons and nose, a snakes lolly scarf and a strawberry hat!

So tell me Dear Reader, have you ever had a bubble waffle? Do you tend to build your own combos or do you order pre-set ones?

NQN and Sammie was a guest of Little Shop of Waffles but all opinions remain her own.