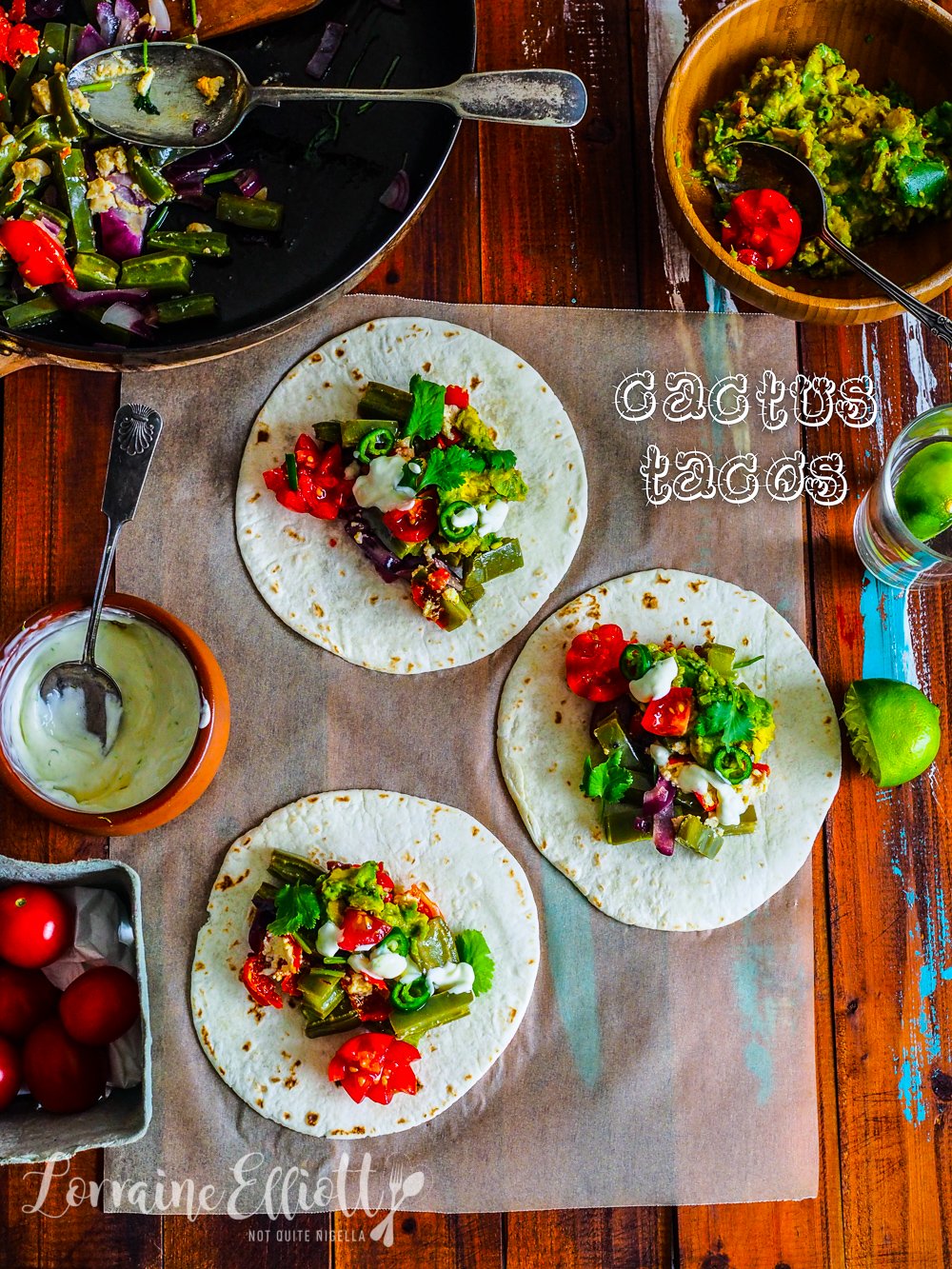 Have you ever tried eating cactus or nopales? They're a delicious ingredient in Mexican cuisine. And don't know where to get these? They're more available that you might think. Just take a good look around and you can forage for this amazing ingredient!

The cactus paddle or nopales (the name for the edible part of the cactus) came to me in a roundabout way. I had made a lemon tart and offered it to Ivy because Mr NQN hates lemon desserts. She came to pick it up to take to her weekend away on the South Coast with her husband Ryan. I wasn't home but Mr NQN let her in and she let me know that she was dropping something off for me. 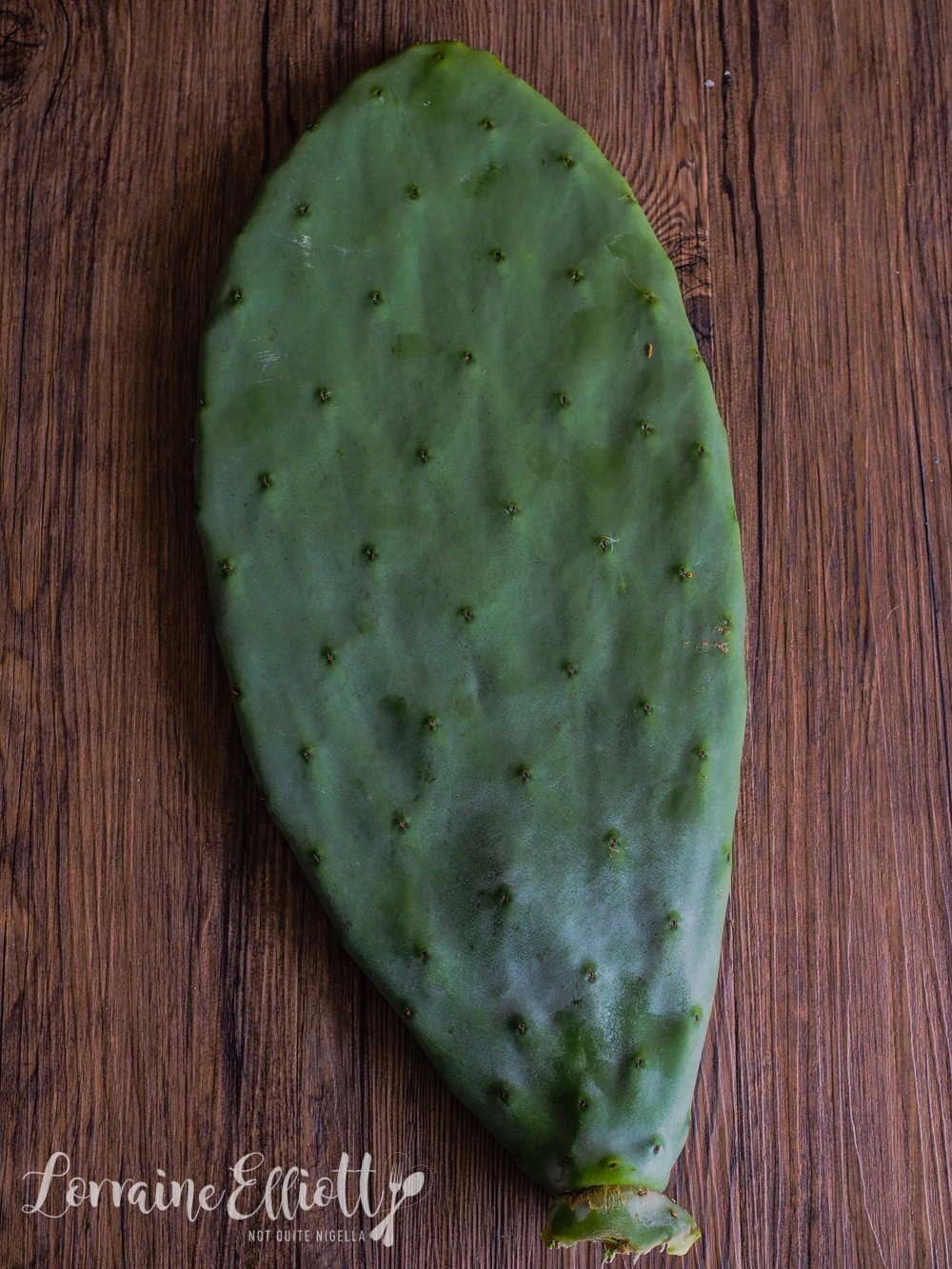 When I got home I saw the enormous cactus paddle on my chopping board. I peered at it from all angles. "That's a cactus right?" I said to him. He nodded, "She said you'd know what to do with it." All I could think was I had no idea what to do with it. "I guess we eat it?" I said unsure.

I asked her where she bought the cactus paddle from. "Woman. I picked it at work. Want more? I deal in underground cactus" she added. I told her that there was no shame in that, I'm an underground cake dealer of sorts.

So what does cactus taste like? Nopales or cactus is refreshing, with a lemony flavour and a juicy-ish crunch and a sort of meaty texture to it. To treat it, you shave the spines off with a sharp knife wearing gloves for protection (at least for the first couple of times). Then trim around the paddle and slice up into bite sized pieces. Look for cactus paddles that are medium to dark green in colour that are firm, unmarked and avoid ones that are thin and floppy. 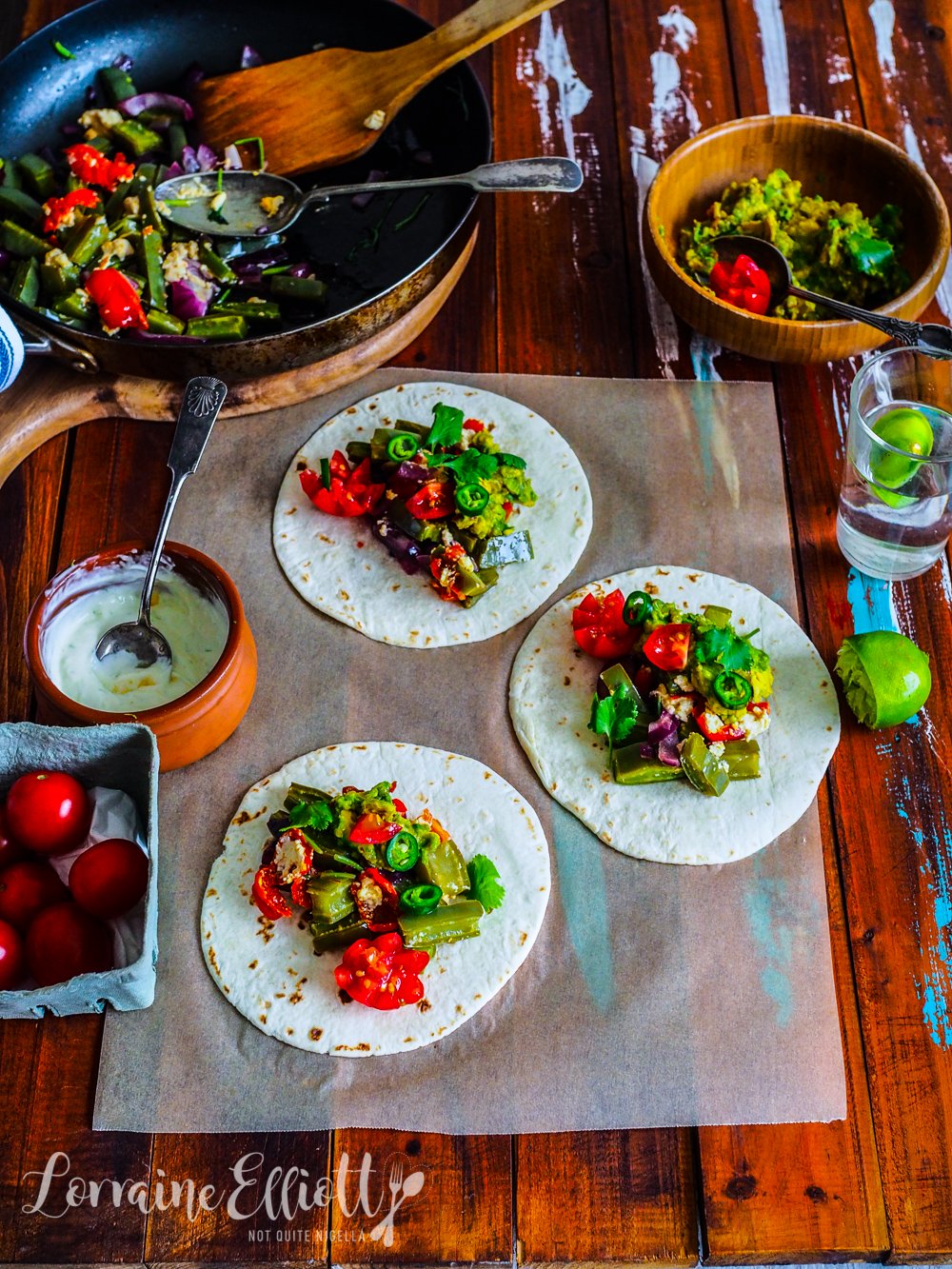 Nopales has nutritional benefits. It's high in dietary fibre, non-carbohydrate polysaccharides, such as pectin, mucilage, and hemicellulose that help reduce blood sugars and LDL-cholesterol. There are also small amount of Vitamin A, B-complex and Vitamin C.

You can cook cactus one of two ways: you can either pan fry the pieces or boil them in some water. Both treatments allow the sliminess to dissipate from the nopales (similar to okra's sliminess) and out of the two I preferred pan frying them because you can add onion, garlic and coriander flavours to it whereas if you boil it, it can be quite plain by itself. This was a large cactus paddle but you can also grill the much smaller ones and top these with your favourite toppings for a non carb taco. And I have to say that this combination, with nopales, onion, garlic, coriander and pepperdews (don't laugh, that's what I had and it worked) served on tortillas worked like a treat with the garlic and lime crema and fast guacamole that I made.

So much so that I asked Ivy my underground cactus dealer for another cactus paddle and she turned up two days later with another enormous. Then two days a friend of mine who saw me playing with them on Instagram asked me where I got them and Ivy furnished her with a couple of cactus paddles!

So tell me Dear Reader, do you have friends that give you quirky things? Have you ever eaten cactus? Do you ever forage for food? 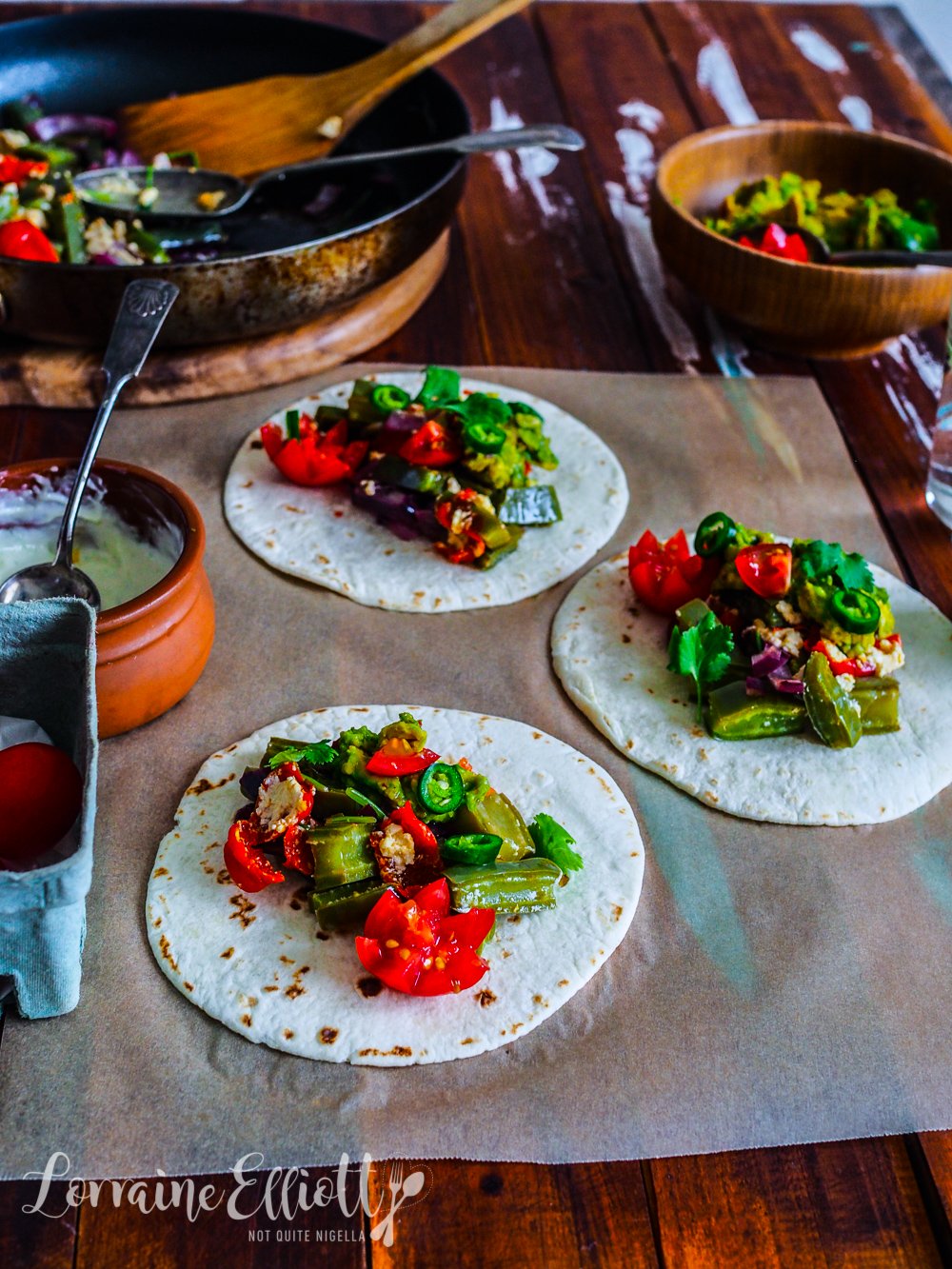 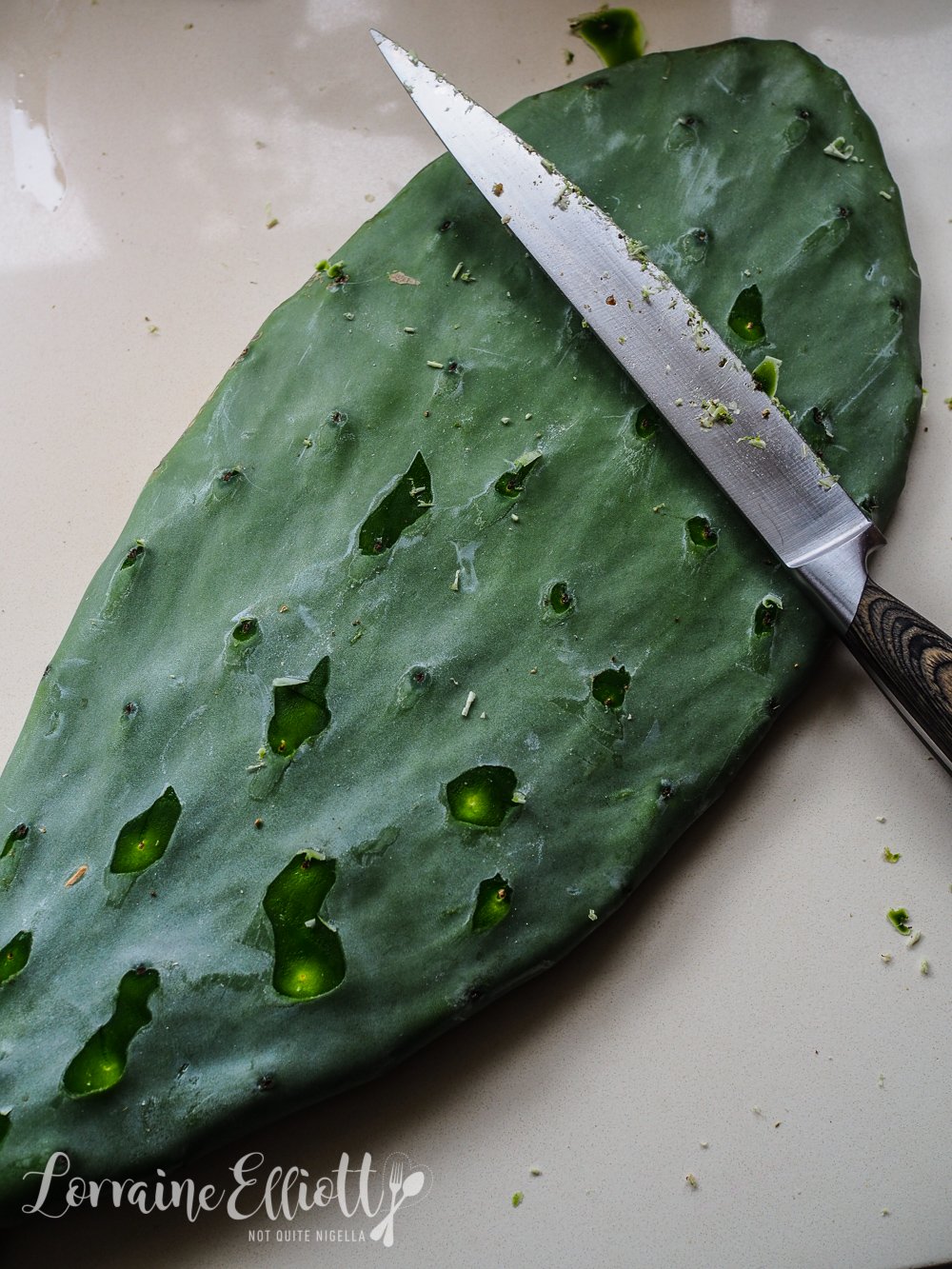 Slicing off the spines

Step 1 - Put on disposable gloves and using a sharp knife angled flat against the paddle, trim off the spines. Then trim around the edge of the paddle and cut into bite sized pieces. 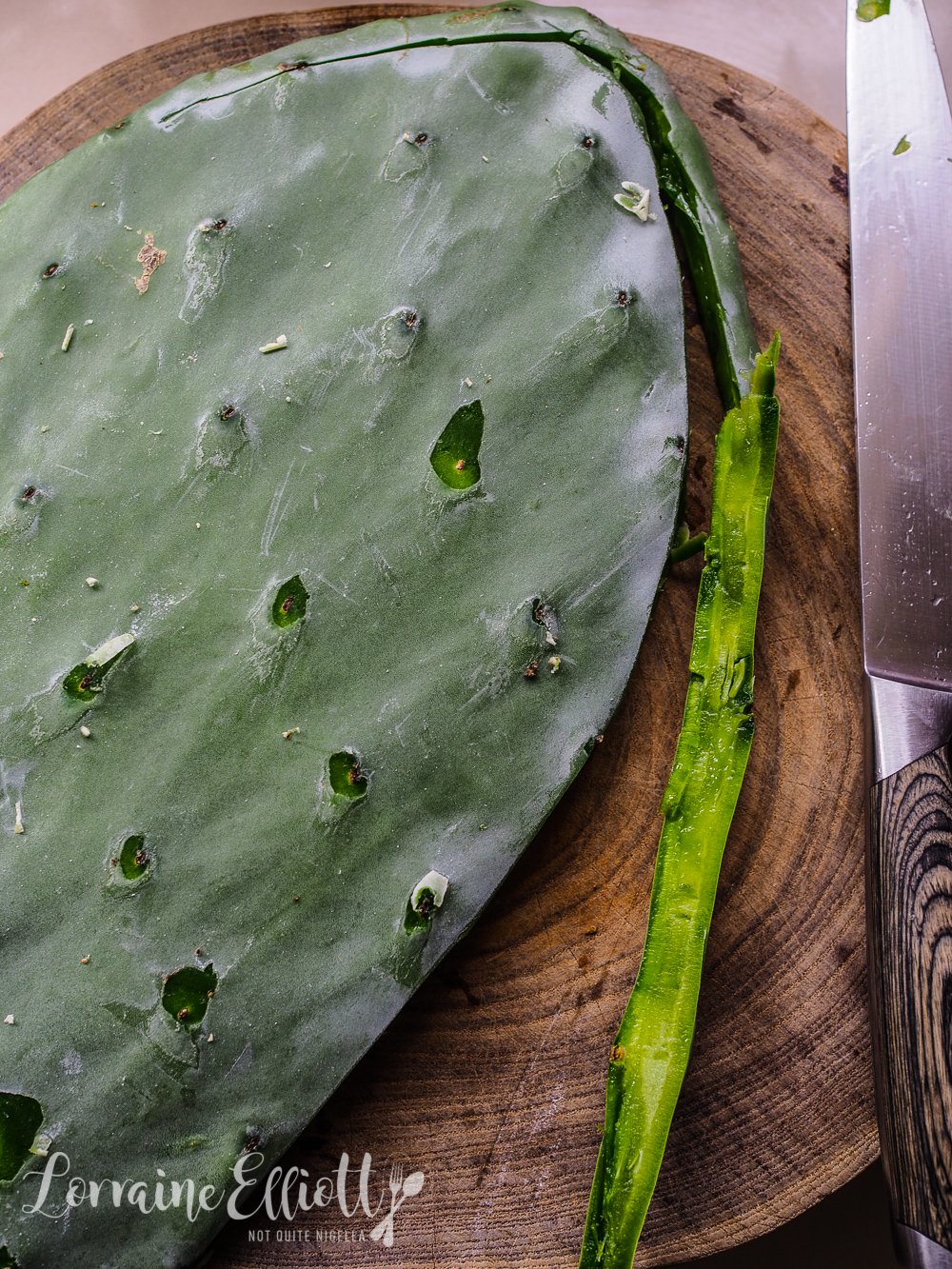 Trimming the edge from the paddle

Step 2 - Add some oil into a frying pan and saute the cactus pieces for 15 minutes or until the cactus turns a darker green and the slime dissipates. Add the onion and garlic and fry until sauteed. Remove from heat. Chop up the pepperdews and add these to the pan and mix. 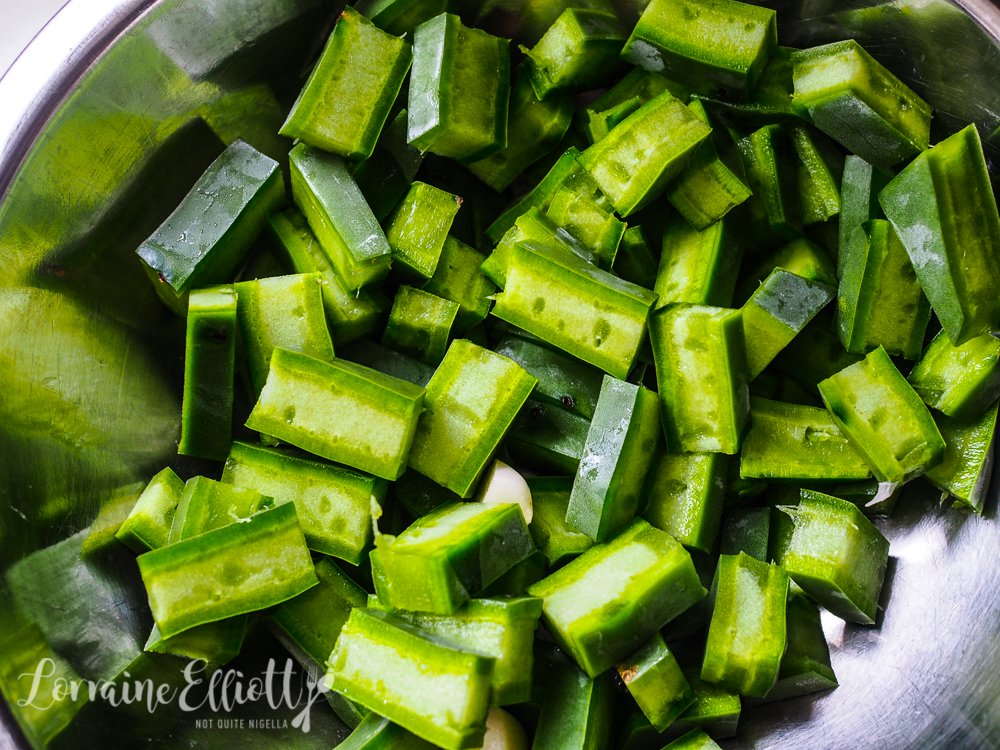 Step 3 - Spoon the filling onto the warmed tortillas and top with guacamole, crema, chopped cherry tomatoes and coriander. 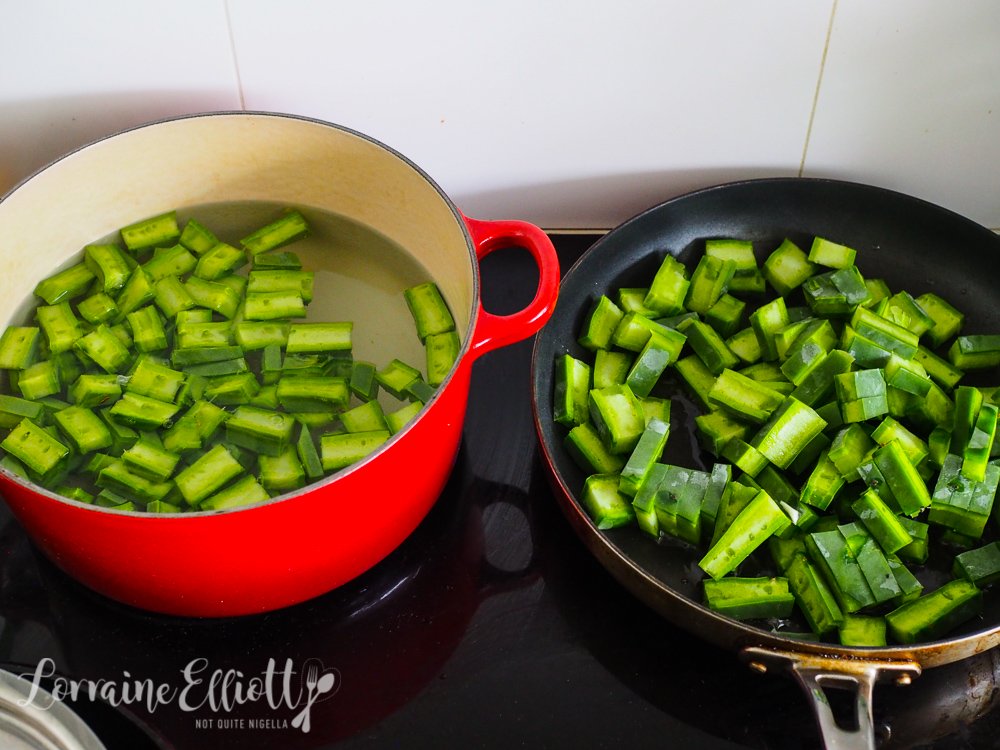 Step 4 - To make the garlic crema, mix all ingredients together in a bowl and drizzle over the tortillas. 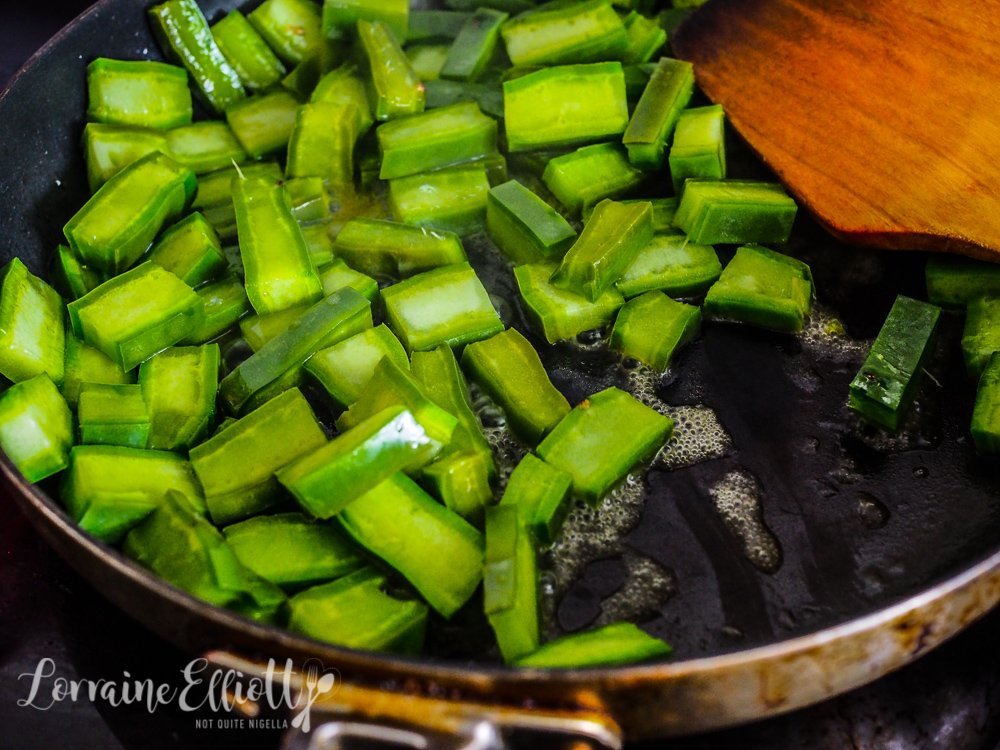 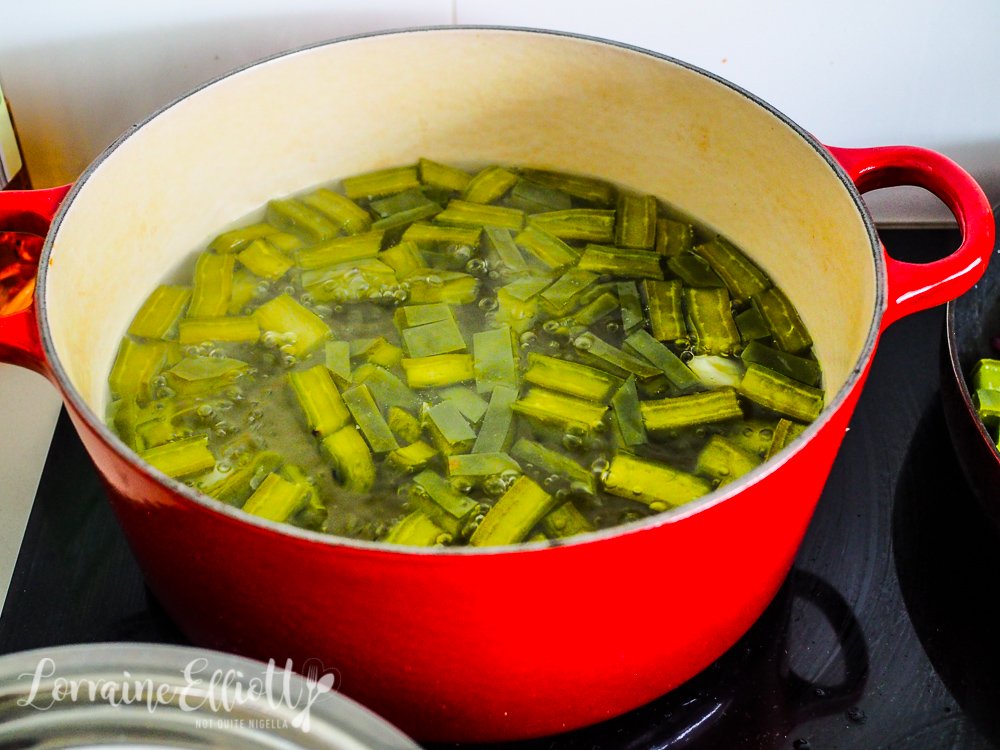 The mucus being released while boiling the cactus