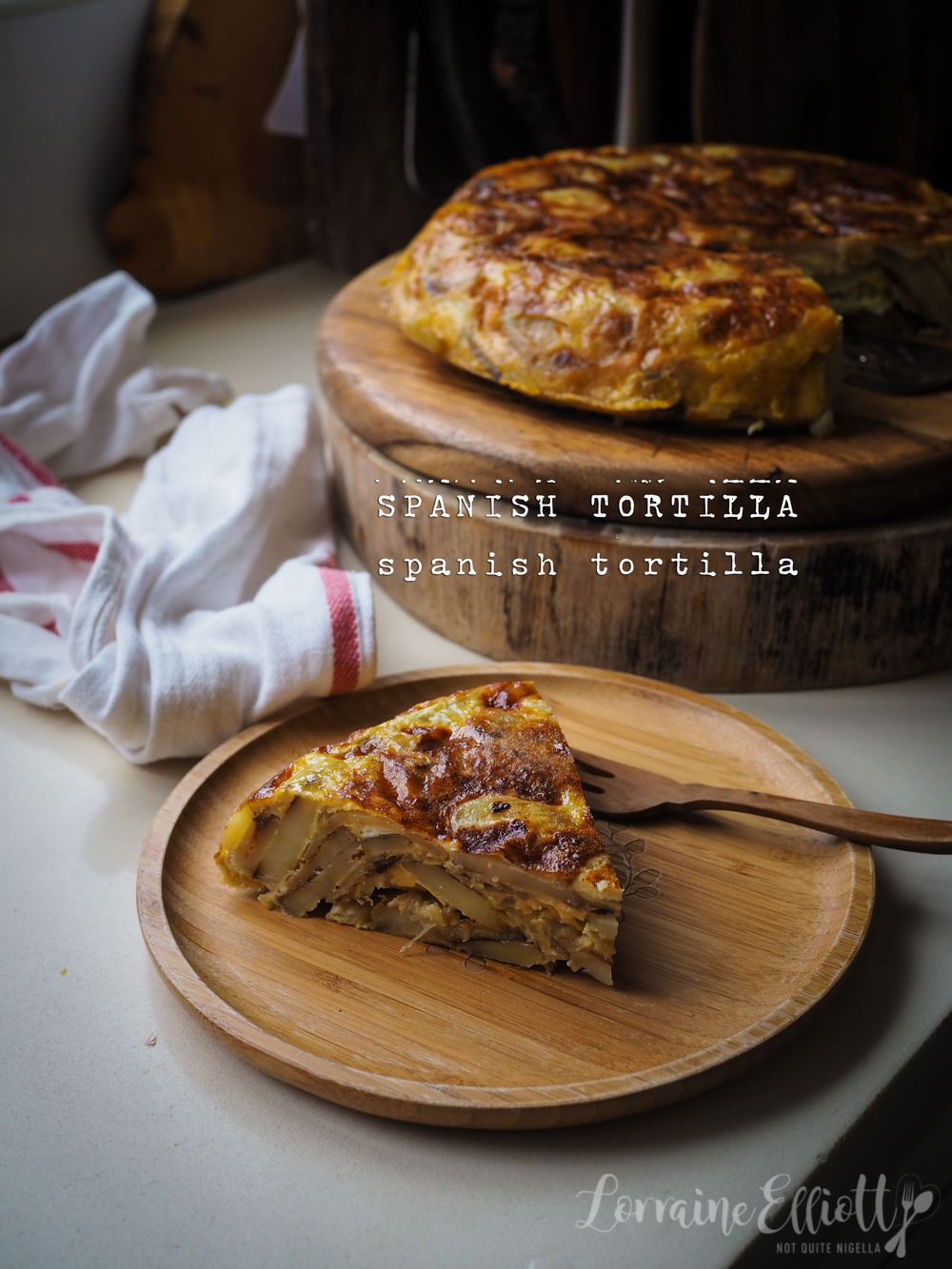 Spanish Tortilla or Omelette is a classic dish that is served at tapas bars at room temperature. It's a simple but wonderfully tasty dish made with just four ingredients: potatoes, eggs, onion and salt and is delicious hot, room temperature or cold!

Spanish Tortilla is a dish steeped in history. Omelettes date back to the 16th century in Latin America and Europe when the Aztecs were said to have eaten a plate shaped dish. But the Spanish omelette came about when the Spanish came across the Incan potato and brought them back to Spain. One of the many legends says that general Tomás de Zumalacárregui invented Spanish Tortilla during the siege of Bilbao during the early Carlist wars as a way of feeding the troops. 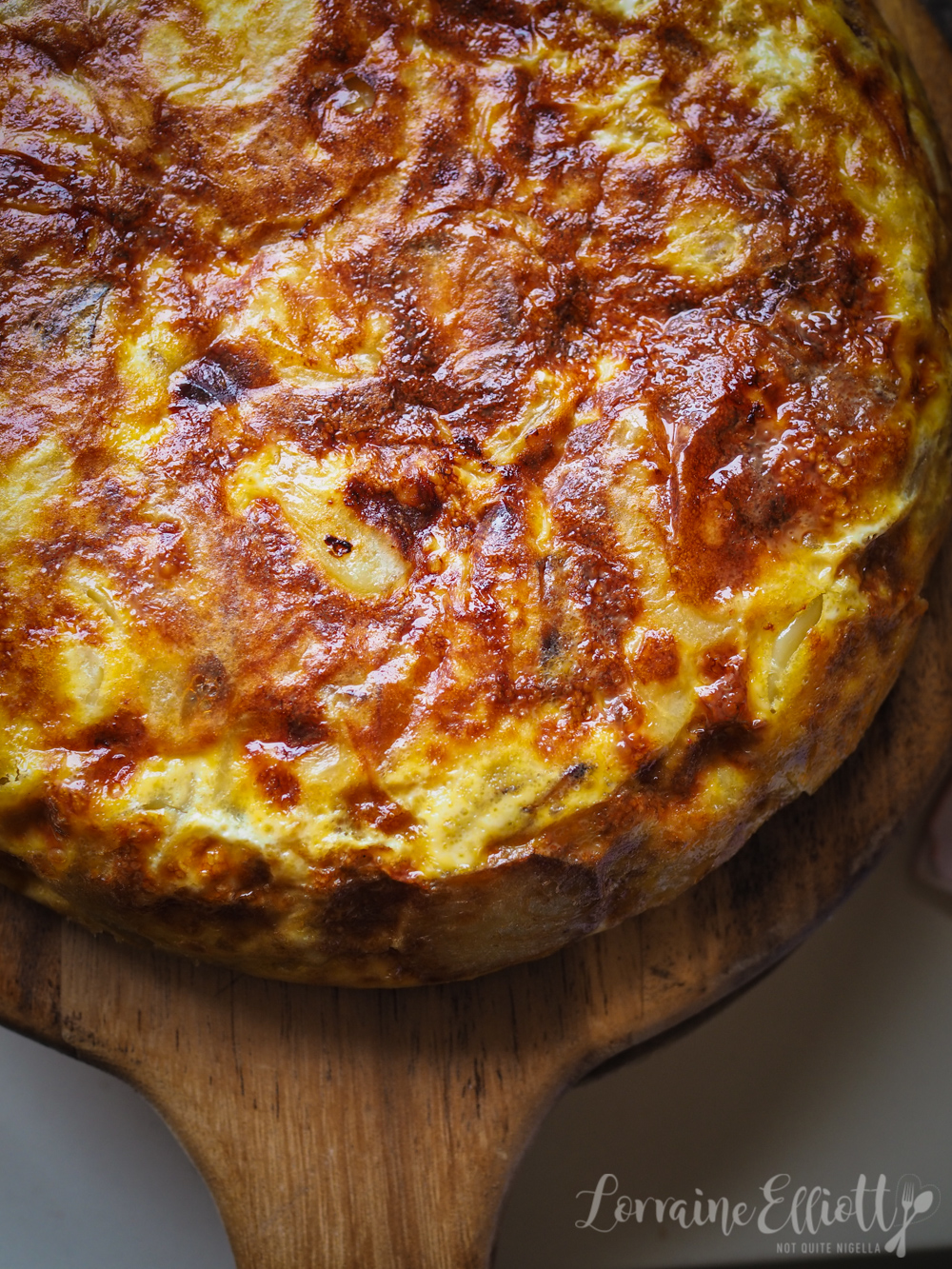 Why is a Spanish omelette called a tortilla? Tortilla is a diminutive of the word "Torta" which means cake and references its resemblance to a cake. In a Spanish omelette the potatoes are either sliced thinly or cubed. It's up to you which you prefer. Traditionally a Spanish Omelette or Tortilla de Patata does not contain onions and is the ultimate simple dish using potatoes, oil and eggs. Nowadays many add onions for flavour and sweetness. There's also a version of Spanish tortilla that uses potato chips!

Which potatoes to use for Spanish tortilla? Some say floury (like Coliban), others say waxy (like Dutch Creams). Waxy keep their shape better while floury are softer. It's really a matter of your preference for texture. If you do use floury potatoes, soak them in water for 10 minutes and rinse the starch from them. 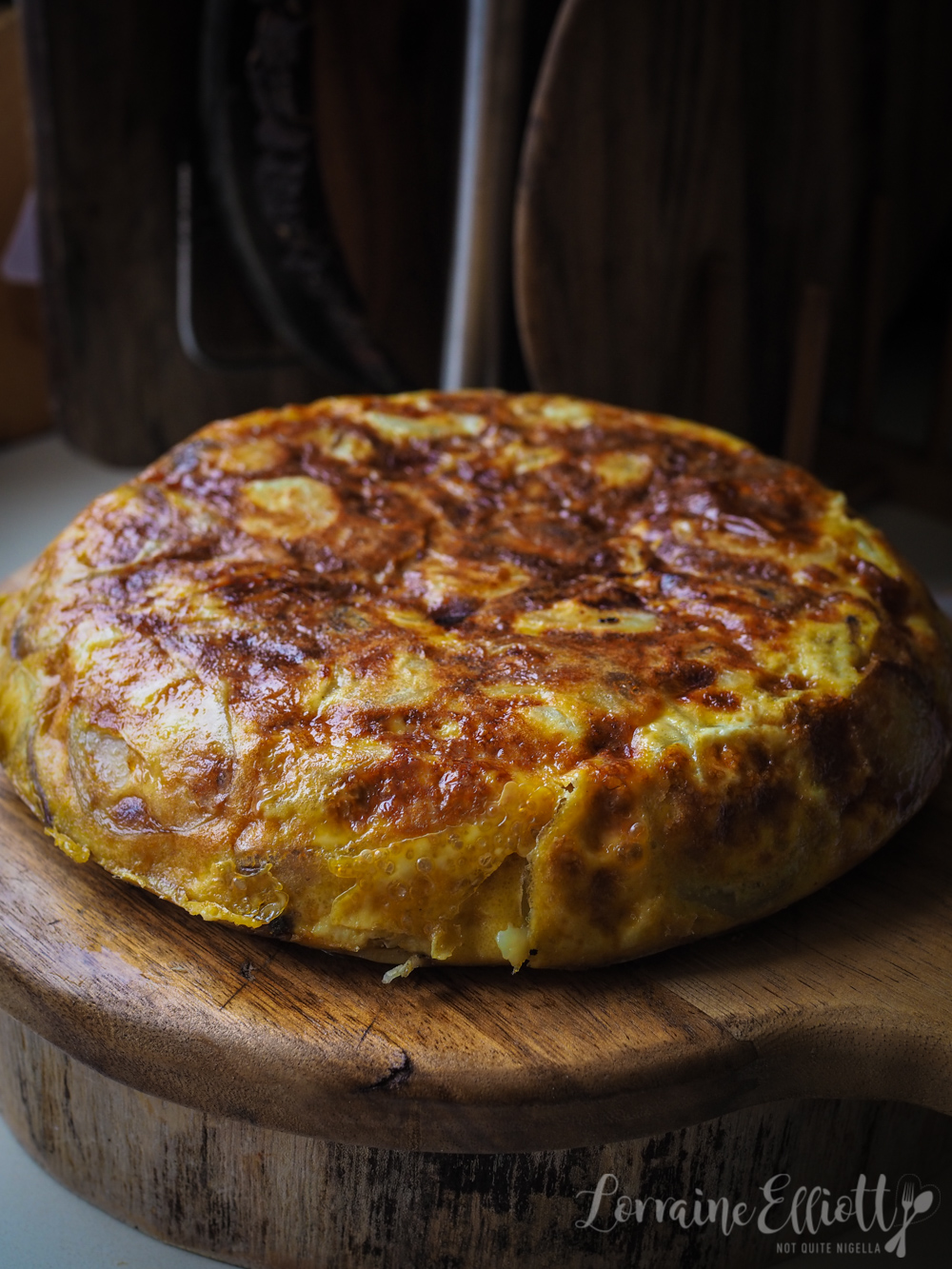 1 - A non stick pan is very important as you don't want the tortilla sticking to the pan after all the work you've done cooking the potatoes.

3 - Potatoes need salt. Potatoes and salt are like a co-dependent couple or the people that you want to set up on a blind date because you know they'll get on so well. So while 1.5 teaspoons of salt sounds like a lot, it's absolutely needed because there are a lot of potatoes to season.

4 - The most important thing is to make sure to cook the tortilla on low heat. Don't be tempted to rush it, keep it low like 3 out of 10 heat and just be patient - distract yourself with something. A watched Spanish omelette only ends up overcooked as you lose patience and increase the heat. 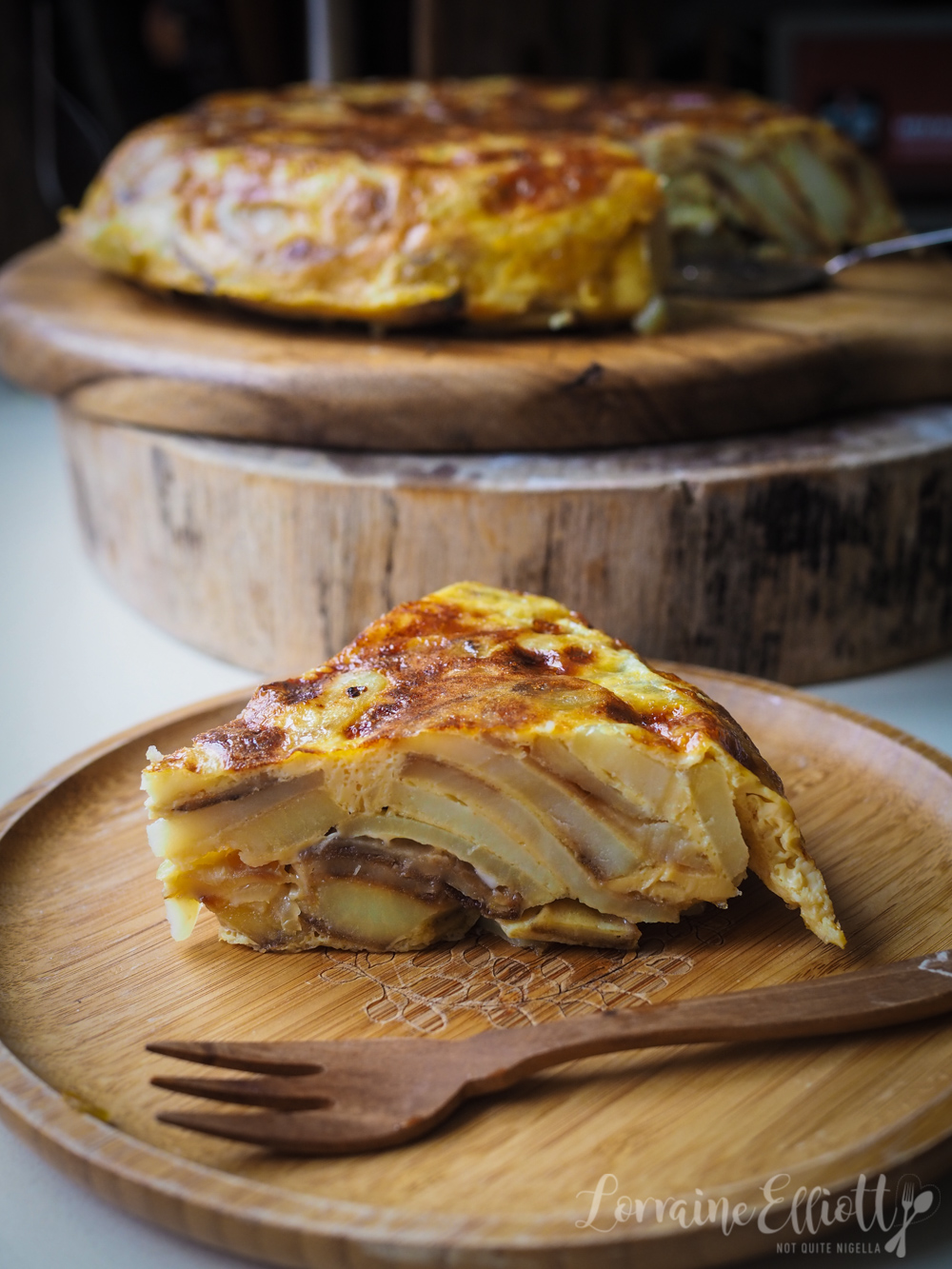 6 - Flipping a tortilla is the most challenging part. Conversely a tortilla flipped with confidence in one swift motion will always work. After this you can slide the tortilla back onto the pan to cook the top (now the bottom). Some people pop the pan under the grill to finish it off if they want to avoid flipping it while undercooked but just make sure to use low heat only.

7 - The perfect Spanish tortilla texture is not too dry but only just set, hence why I keep banging on about cooking it on low heat.

Confession: I served this with chopped, pan fried chorizo on the side because I had some and they were delicious together. But this isn't the classic way to serve it and may just end up getting some people mad for messing with such a classic dish. 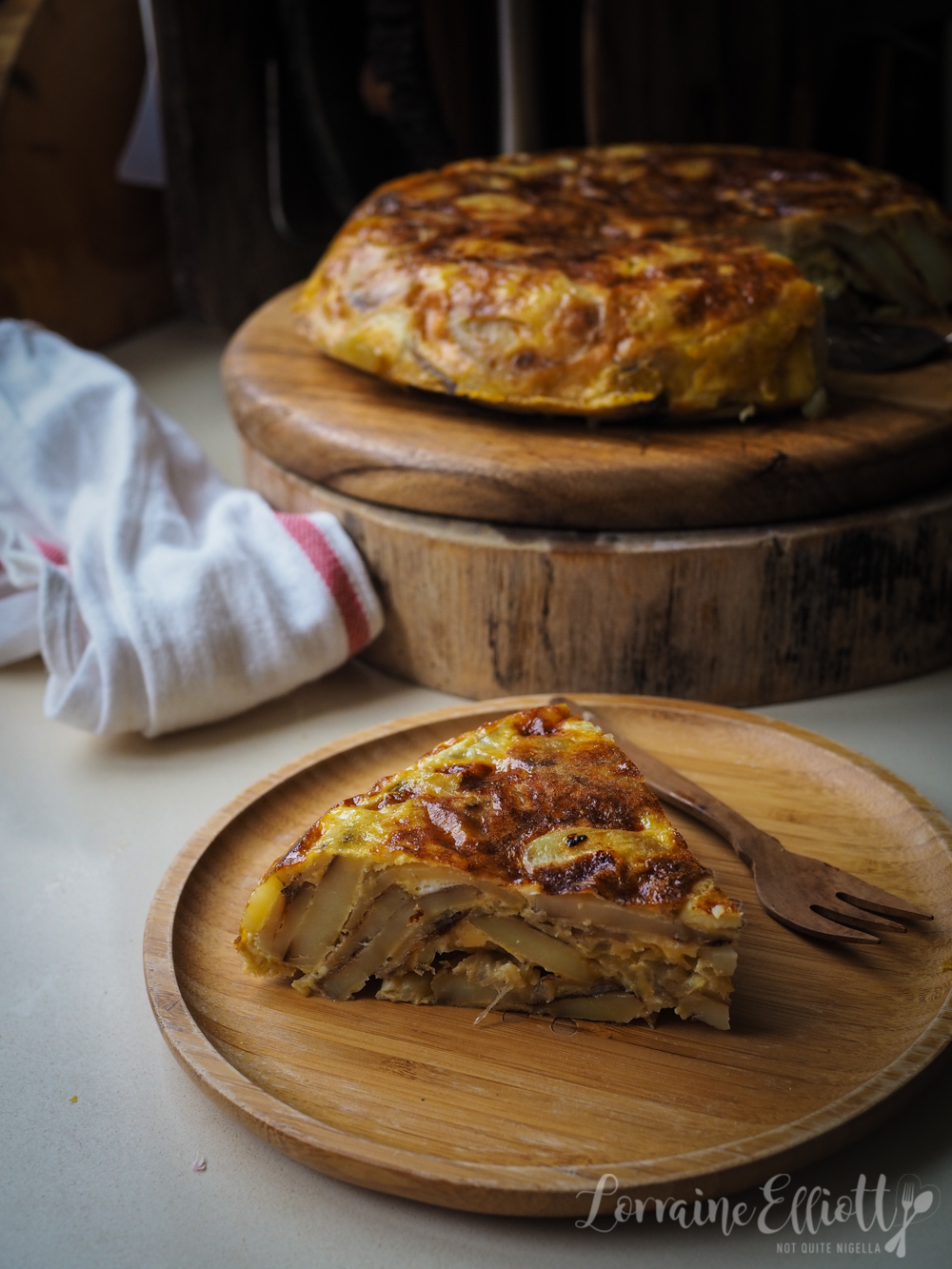 Apart from clearing potato space, I'm going to show you some new things that I have in my kitchen as part of the In My Kitchen series hosted by Sherry of Sherry's Pickings. 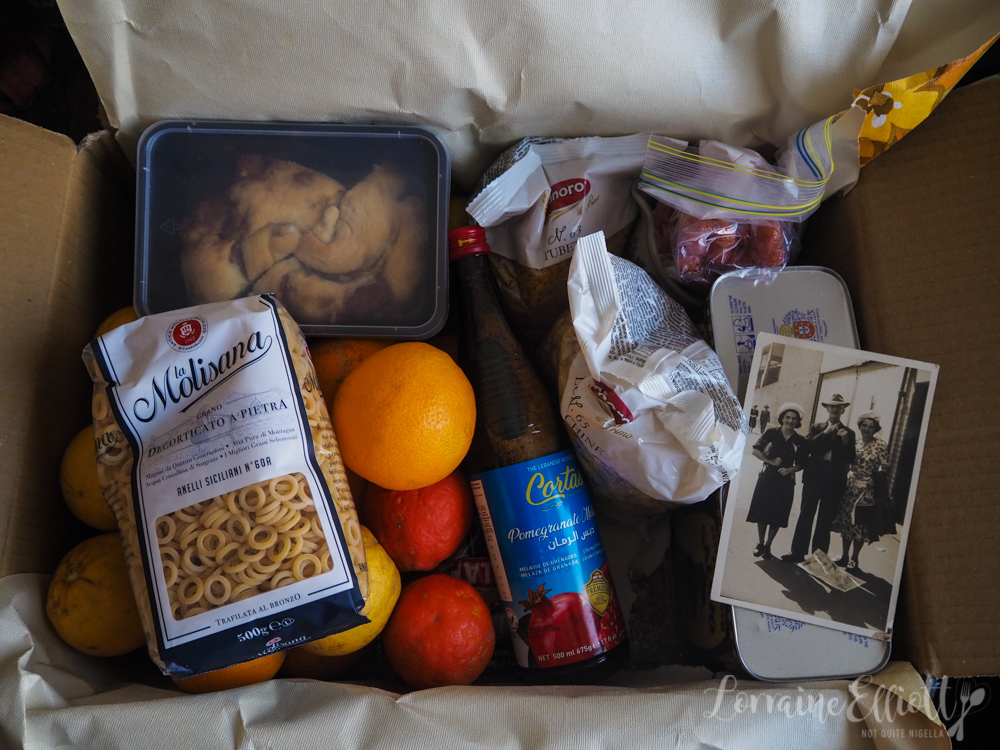 The first pic is a box of goodies that my friend Valentina. We had been sending boxes of gifts and food to each during lockdown and this one had a few types of pasta which I used in Greek Lamb Shanks and Timpano, some fantastic Portuguese extra virgin olive oil, dried cumquats, pomegranate syrup, homemade tahinopita and her home grown citrus. And the black and white photo? It's just a photo that she found at an op shop. 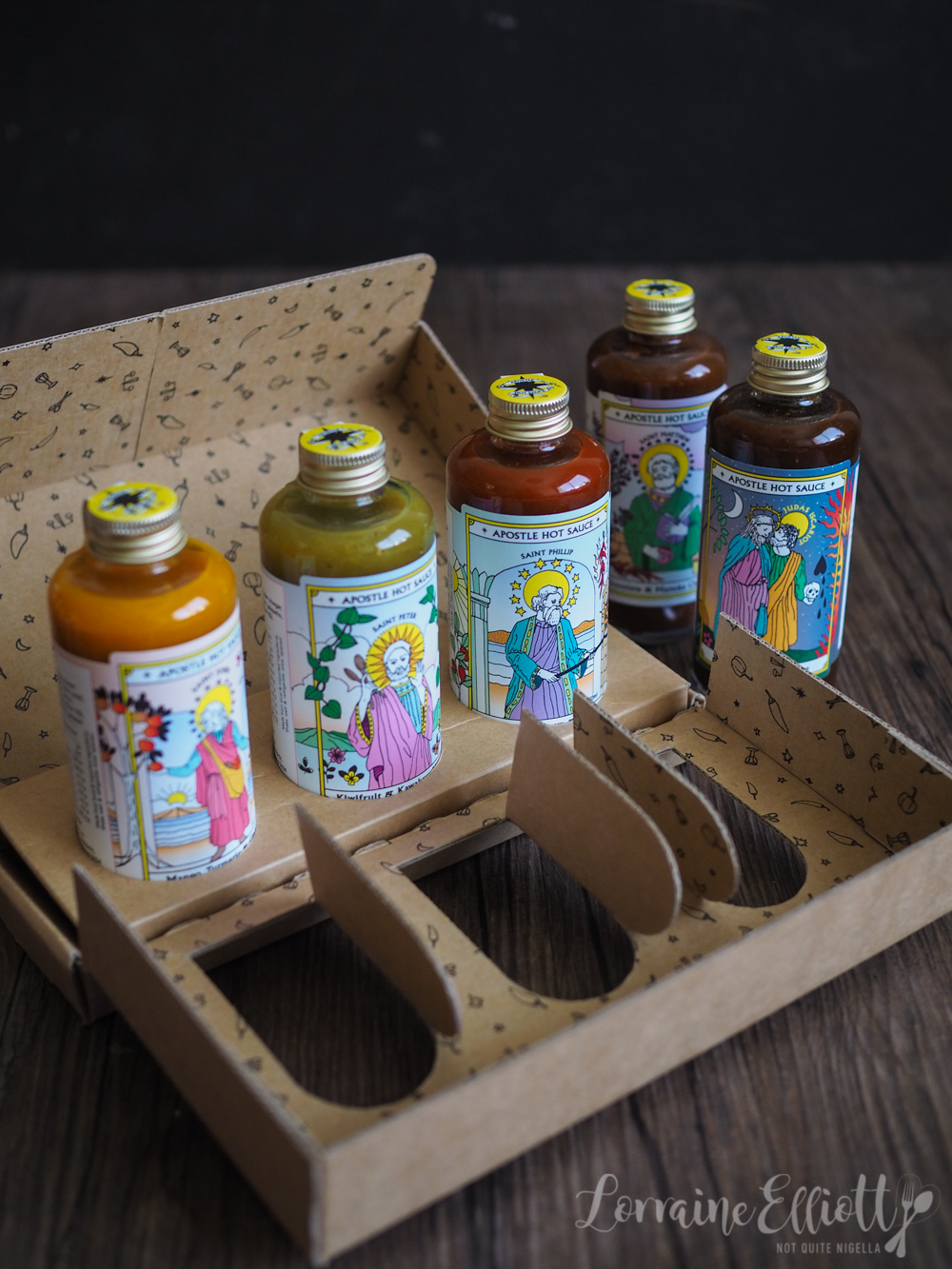 The next pic is of a New Zealand brand Apostle hot sauce. Apart from having the best packaging (seriously, is this perfect Christmas gift or what?) I loved these hot sauces with flavours named after saints and sinners. The Saint Phillip is their roasted capsicum & chilli and is their classic red hot sauce but they've also got interesting flavours like Saint Peter made with kiwifruit and kawakawa verde or Saint Matthew with chocolate & manuka chipotle! They are available at David Jones. 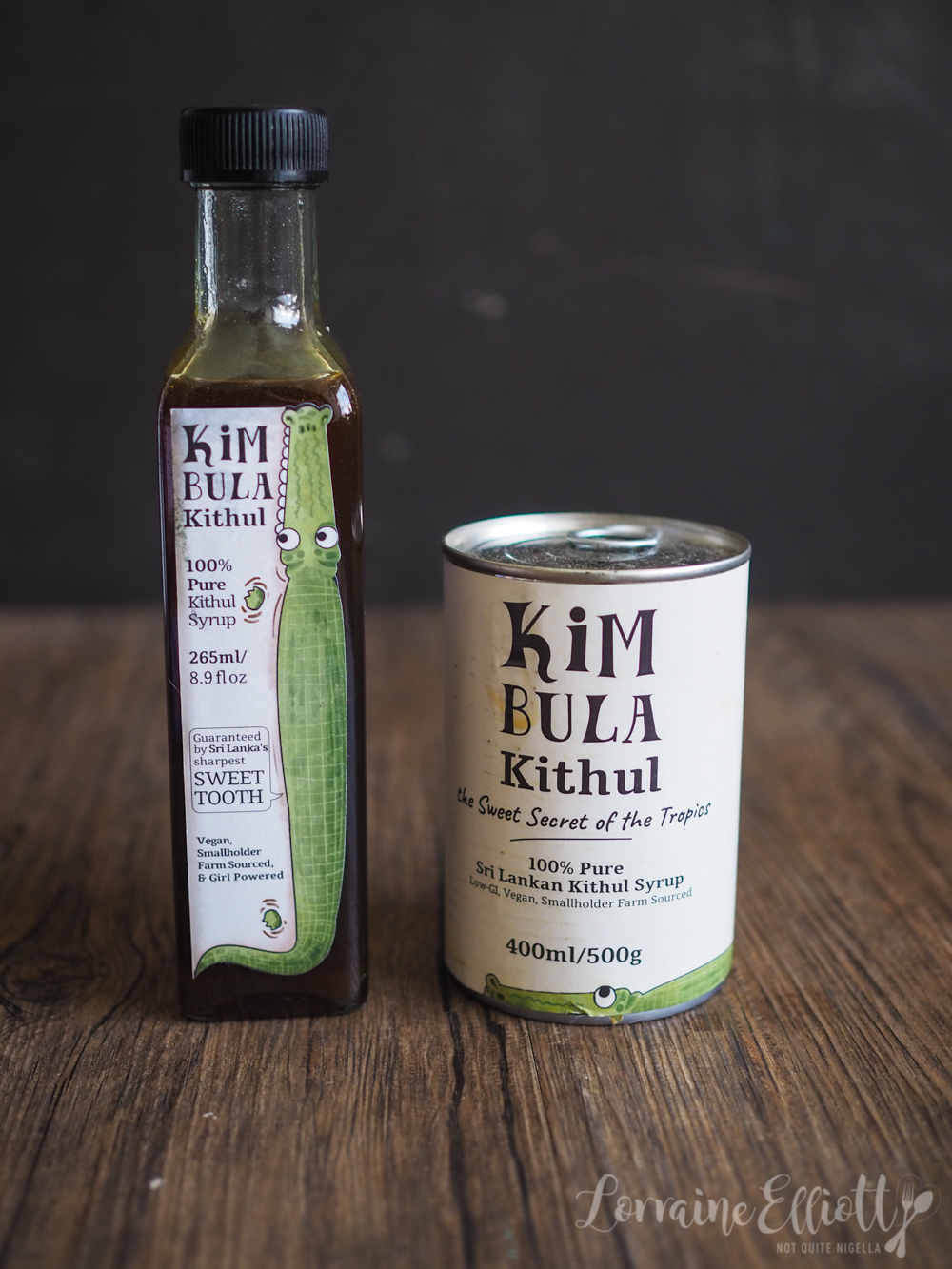 I also was sent some Kimbula Kithul syrup. If you've ever visited Sri Lanka you'll be familiar with the breakfast dish of "kithul and kurd" which is kithul treacle over yogurt. Kithul syrup is made from the sap of Kithul flowers. Kithul tappers climb the trees with a basket and knife to collect the sap which must be boiled immediately to prevent fermentation. Kithul syrup is low GI, vegan, preservative free, vegan and rich in Vitamin B and this one is made with no sugar or water added. The syrup itself has a tangy, slight smokiness and can be used in cocktails, stir fries, over pancakes, in drinks or anywhere you would use sugar, honey or maple syrup. 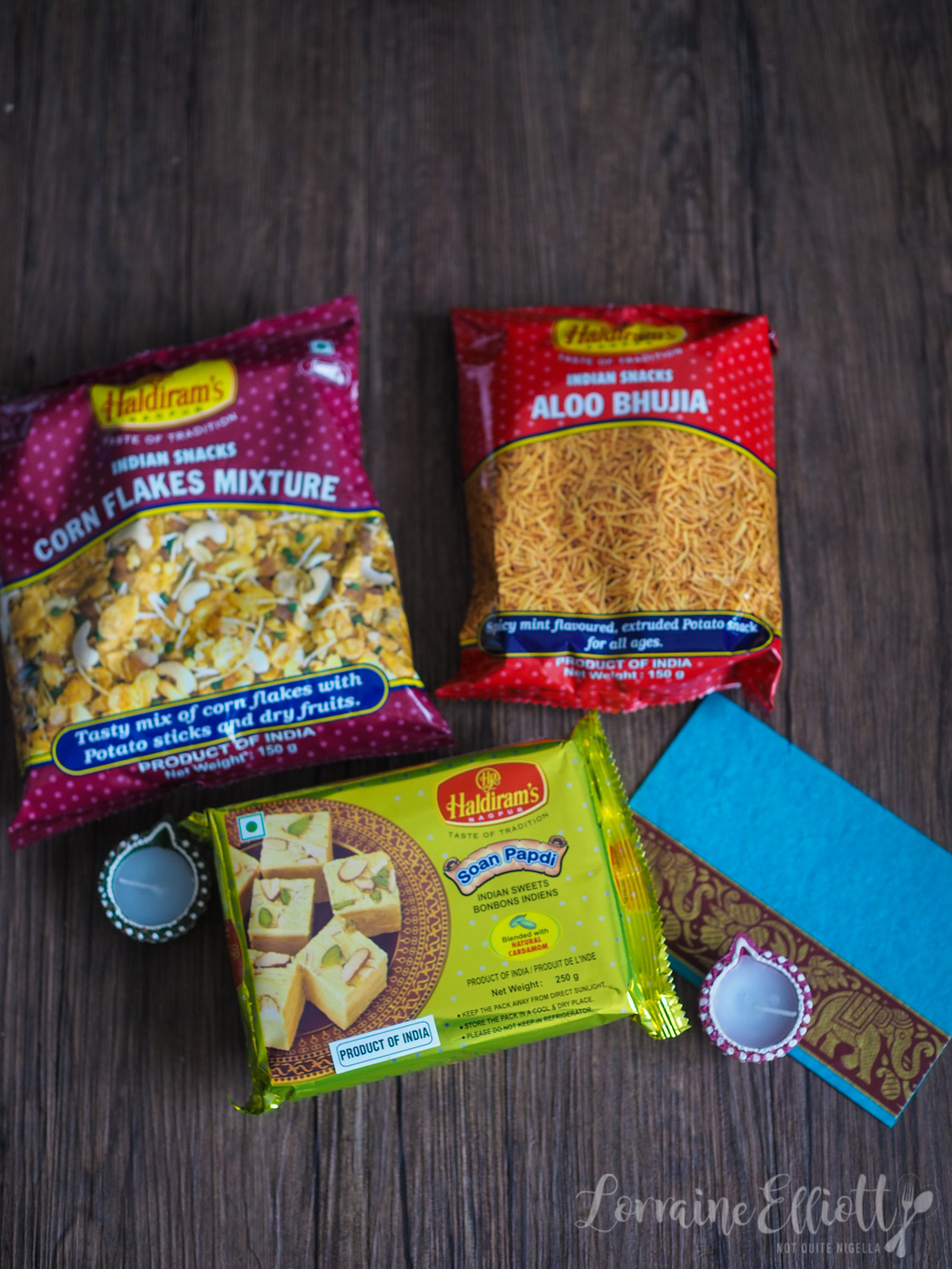 Our friends Ahana and Sagaar also sent us a Diwali package to help celebrate Diwali. It is a 5 day festival of light, like a New Year that celebrates new beginnings and the triumph of good over evil and light over darkness. Before COVID I was planning a trip to India and I've always wanted to see Diwali up close but that was not to be. I loved all of the things that they sent me from the delicious crunchy cornflake and peanut mix seasoned with spices to the tiny potato straws or Aloo Bhujia that had a spicy and refreshing flavour to them. I also loved the Soan Papdi which was like pashmak and halva in one with a cardamom flavour to it. Happy Diwali everyone!

So tell me Dear Reader, have you ever tried a spanish tortilla?

These measurements are ideal for a 26cm/10.2inch non stick pan. 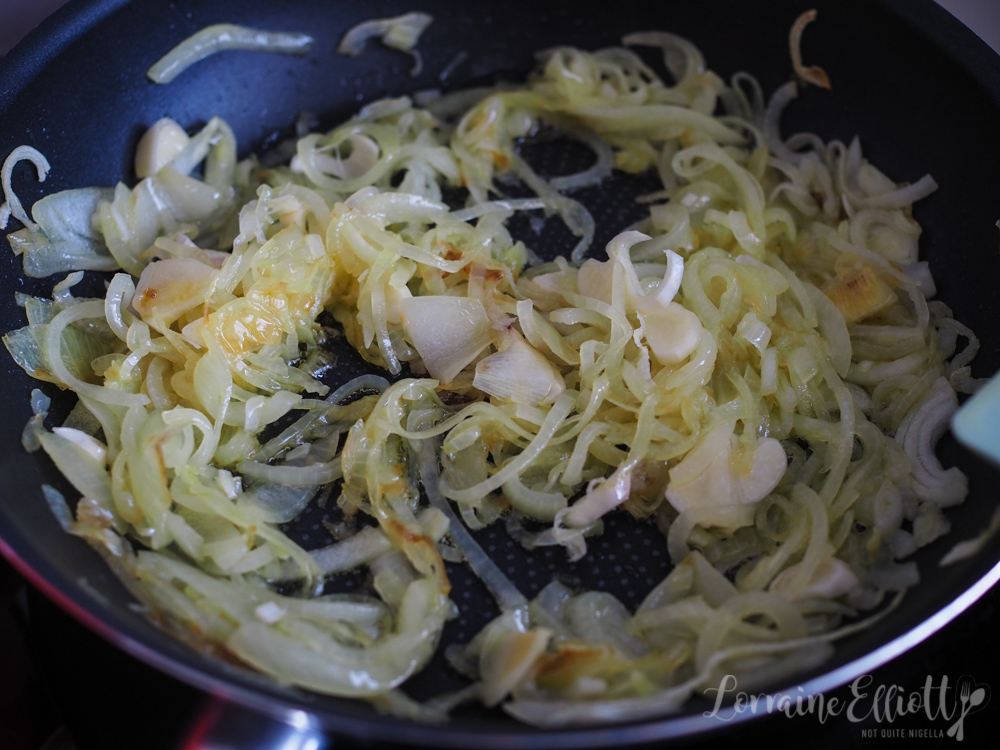 Step 1 - Heat a frypan on medium heat (5 out of 10 heat). First sweat the onion down in some olive oil slowly for 20 minutes while you peel the potatoes and slice them. You don't have to stir the onions much, just let the heat do its job and soften them occasionally turning them to cook evenly. Transfer onions to a large bowl once softened and caramelised. 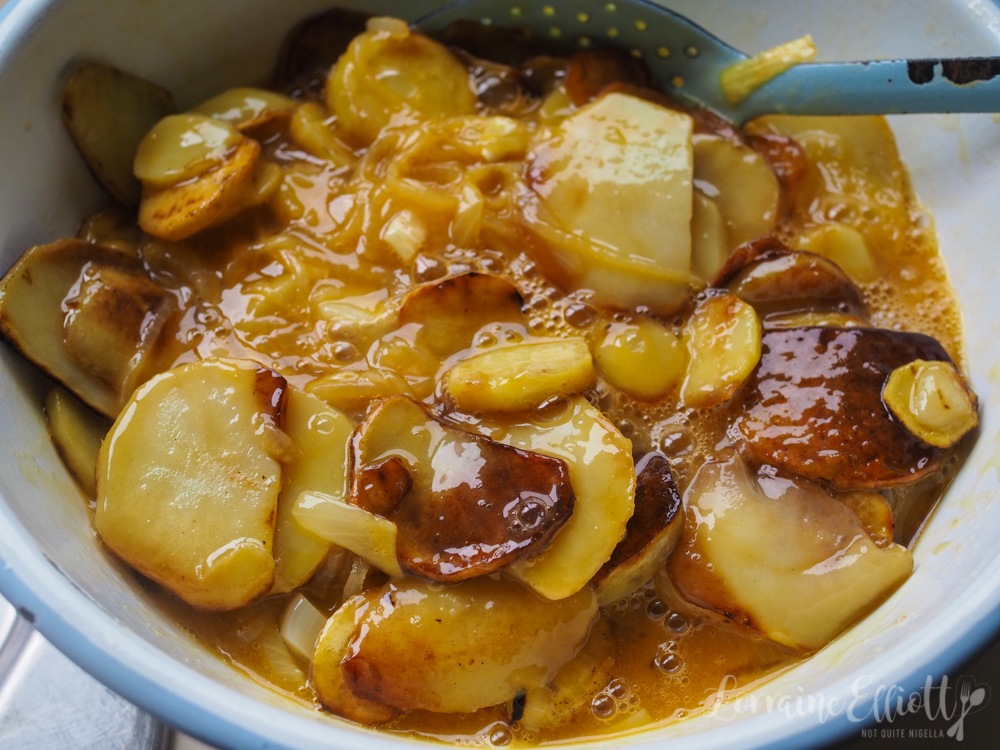 Step 2 - If you are using floury potatoes, soak the sliced potatoes in water for 10 minutes. Otherwise drain well and pat dry on a paper towel. Fry the potatoes in batches on medium high heat (7 out of 10) until golden and crispy and once they're cooked add to the onion mixture stirring until they are combined and season with salt. In a jug whisk the eggs and add to the bowl with the potatoes and onion and toss to combine well. 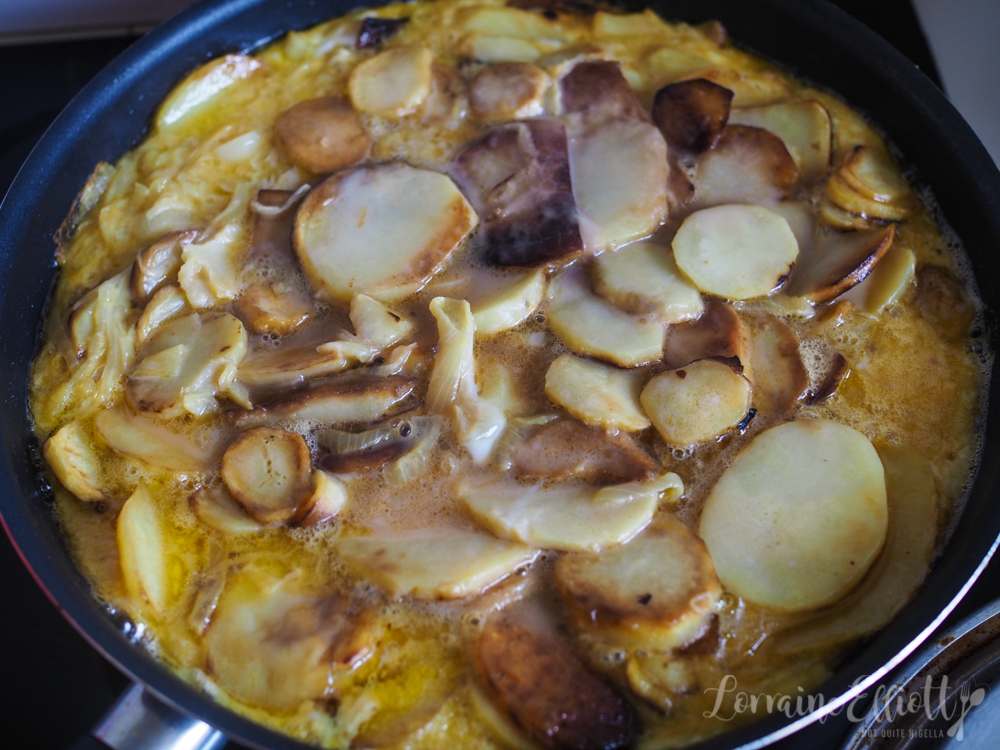 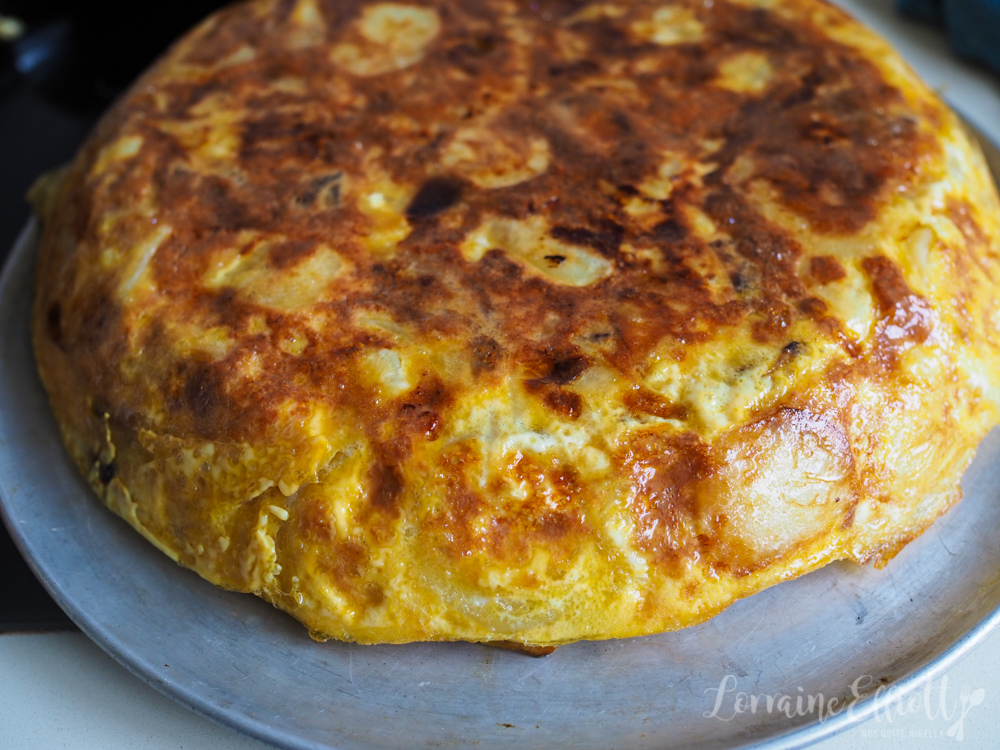 Flipping omelette onto a plate

Step 3 - Wash your non stick pan and dry it. Then heat it on low (3 out of 10) and add 2-3 tablespoons of oil. Pour the omelette mixture into the pan and place the lid on. The omelette will cook from the outside in and it will take a while (around 15-20 minutes or so) for this step. When the tortilla is about 2/3 of the way cooked (from the outer edge) then place a large plate on top of the pan and then flip the pan over. Try not to hesitate when doing this as is nature but if you do it in on swift motion it will be better. The uncooked top of the tortilla will now be facing down on your plate. Slide the omelette back into the pan so that the uncooked part has contact on the frying pan. Fry for another minute. Then flip back onto a plate. The more photogenic side is now facing down so flip this one last time onto the serving plate or board. Serve hot, warm or cold. 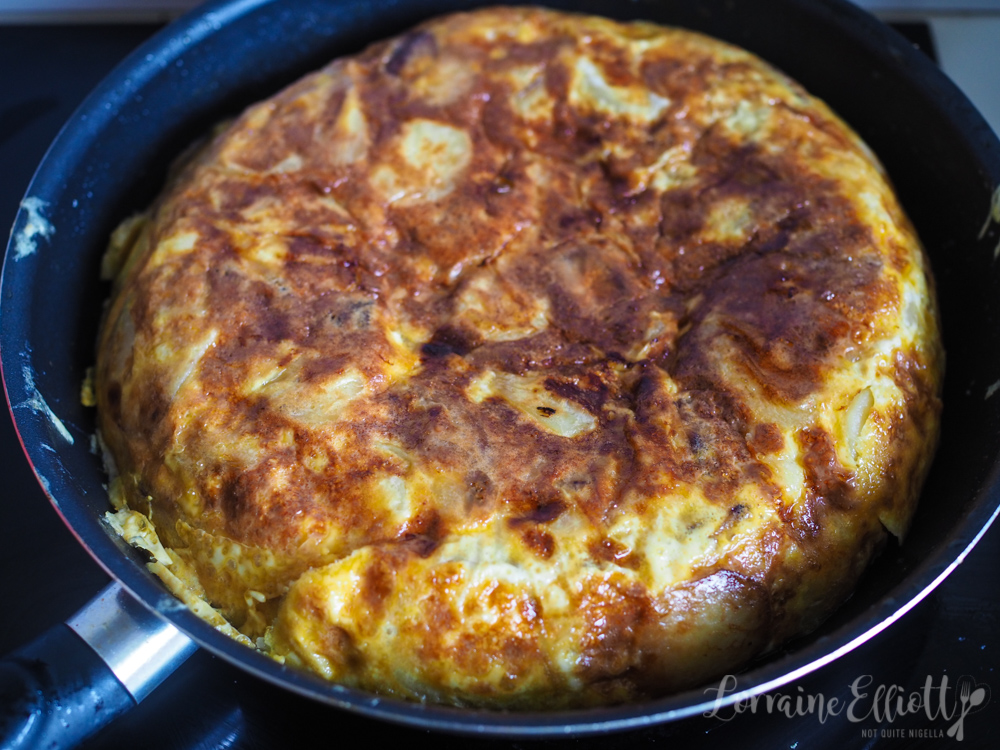 Cooking the base of the omelette