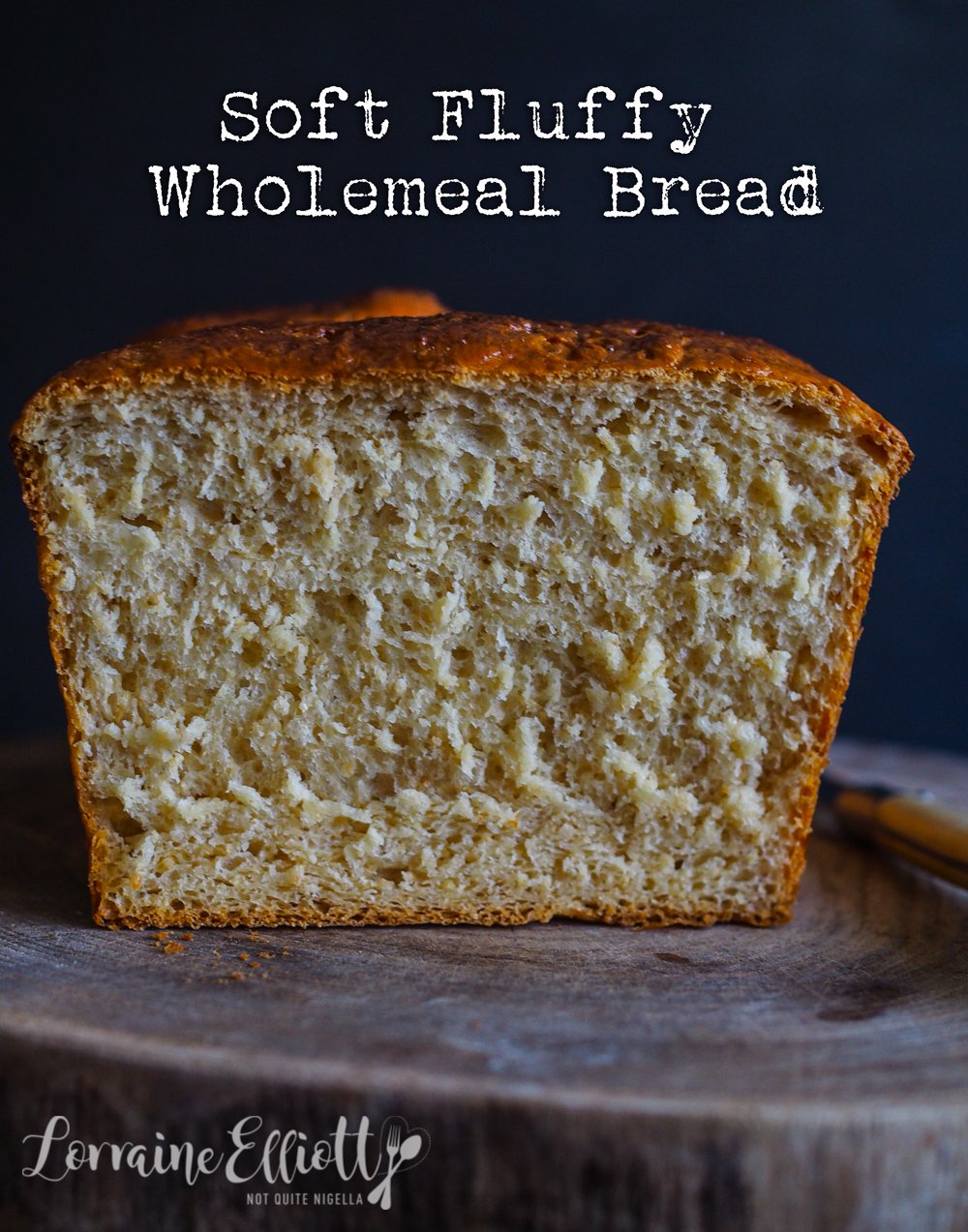 I've never been happy with wholemeal bread until now. While it would be good on the day that you baked it, it would harden quickly on subsequent days. But now I've got a recipe that's a keeper. This wholemeal honey milk bread is 50% wholemeal flour 50% bread flour and is sweetened with honey. It also keeps really well thanks to that baker's secret-the tangzhong roux! 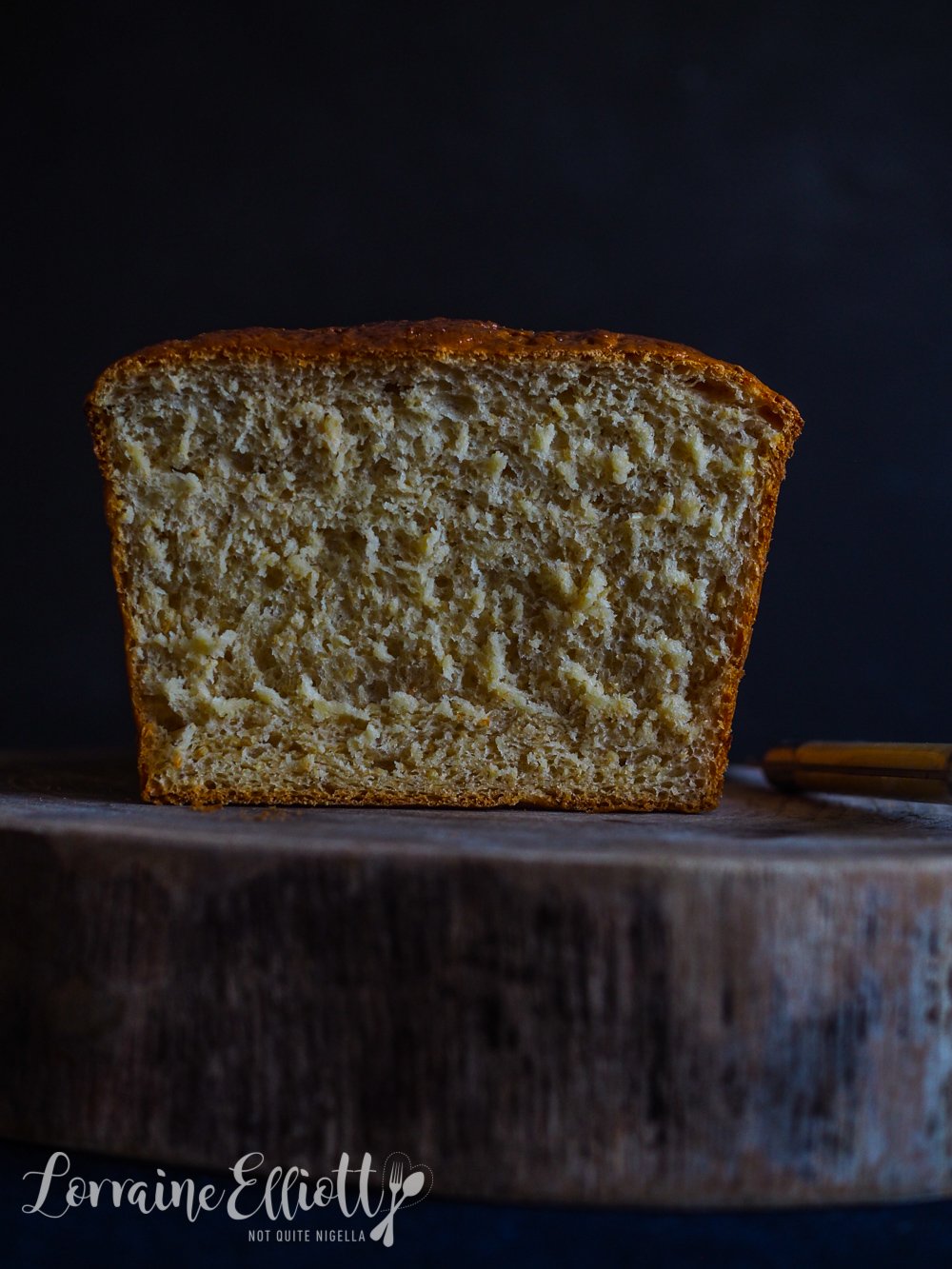 I have been desperately seeking a fantastic wholemeal bread for years and by years I mean for over a decade. Wholemeal loaves are nice enough on the day baked but turn quite hard very quickly. And then it occurred to me to try a loaf using tangzhong roux, the baker's secret that keeps bread fresh for longer and gives it a beautifully soft texture. I paired it with honey for a bit of sweetness. The end result was this bread that was so soft and gorgeous. Every time I make a tangzhong bread I am surprised that one little thing could make such a difference. You could absolutely play with the levels of white and wholemeal flours in this until you get to a level that you like. But my desperate search is now over! 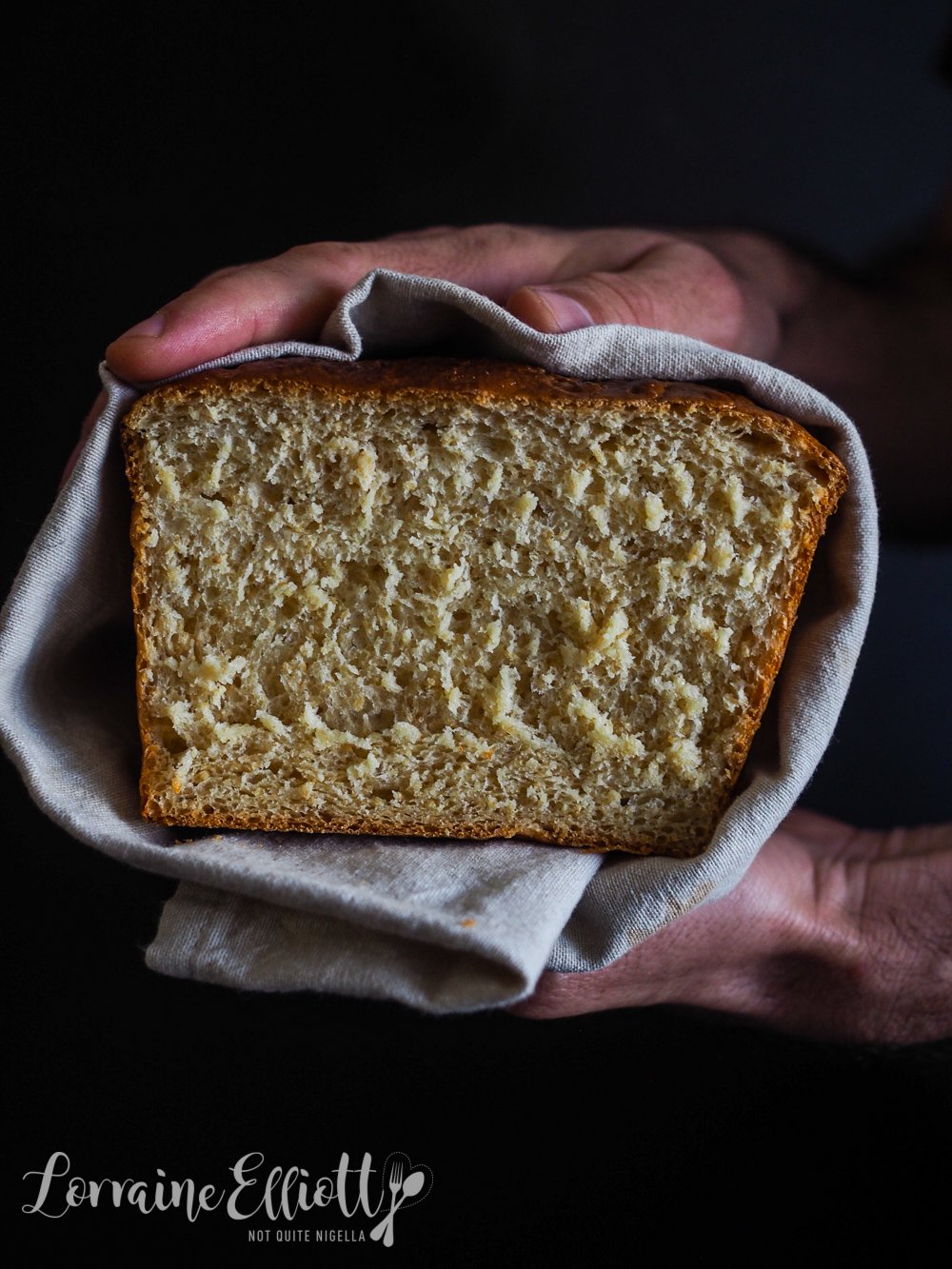 Speaking of desperately seeking, I am always on the look out for hand models. As I work from home by myself (with the sweet companionship of Mochi but paw modelling isn't her forte ;) ), there are some things that photograph better with hands, either holding, slicing or eating the food. Bread is one of those things that goes well with hands. Perhaps it's the idea of being hand made, of creating something so basic, earthy and simple from scratch. Or perhaps I am thinking too deeply into this.

But often I don't have anyone to hold things for me and I haven't mastered the art of the self timer. So I will literally ask almost anyone that knocks at my door to hand model food for me. I pay them in whatever food they hold! And that's a little warning to anyone that knocks on my door ;)

So tell me Dear Reader, what sort of bread do you eat day to day? Have you ever tried a bread using tangzhong roux? 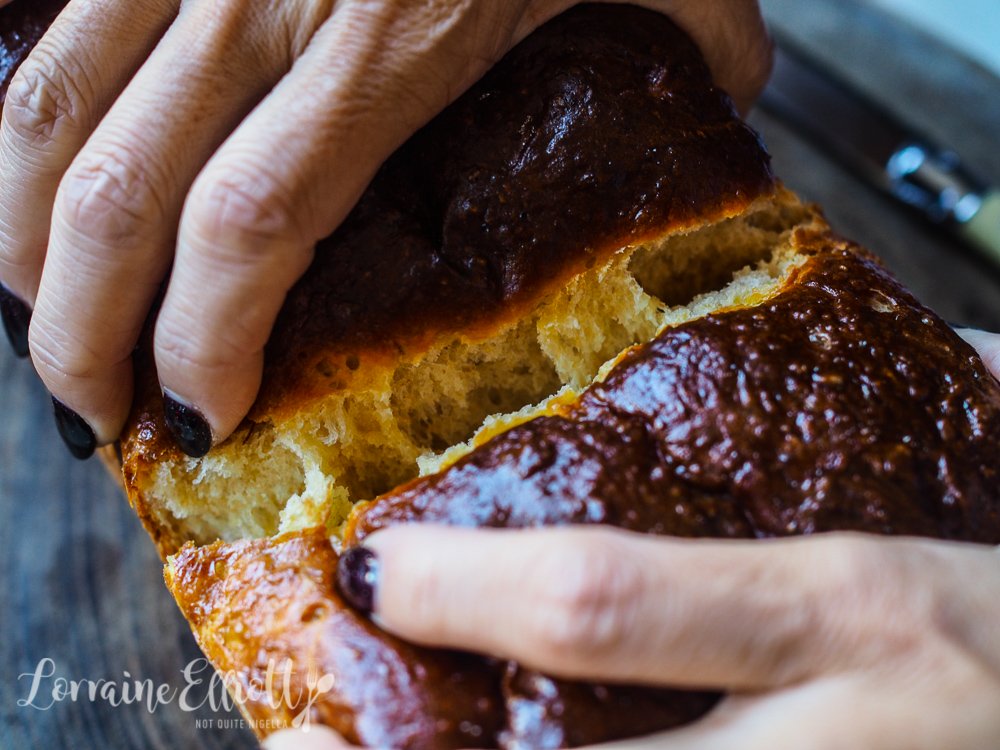 Step 1 - In a small saucepan whisk the 30g bread flour and 125g milk together until smooth. Heat on medium heat until it reaches 65C/149F. Remove from heat and add butter. Whisk in the honey (I warm it a little in the microwave first to make it easier to handle) and second lot of milk as well as the egg. Set aside. 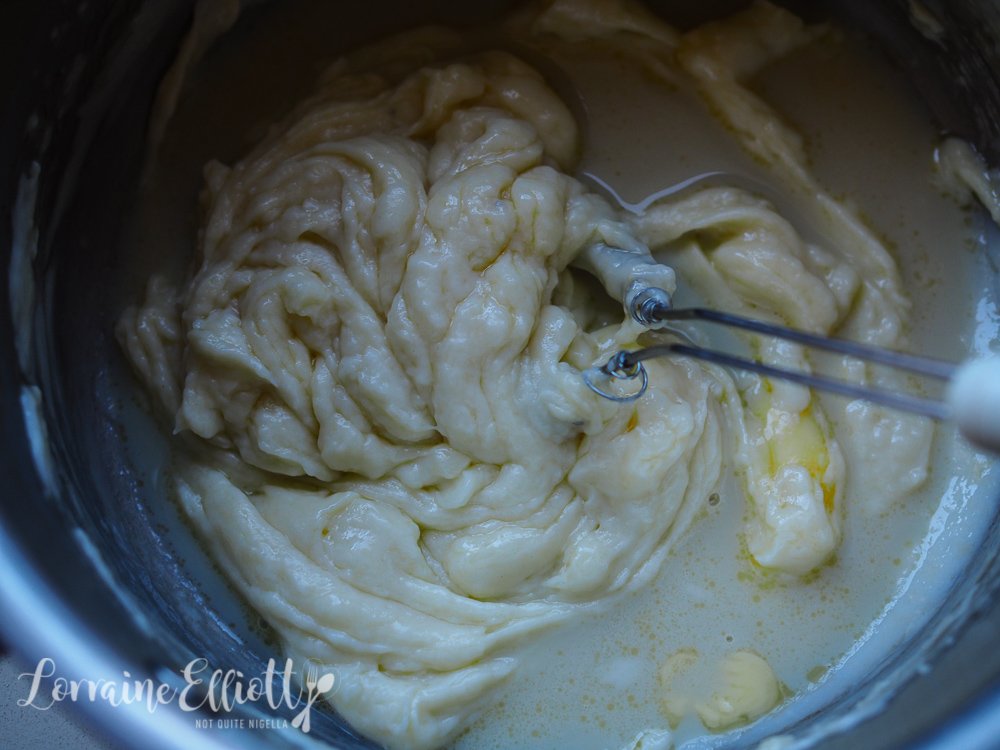 Step 2 - In the bowl of a mixer fitted with a dough hook place the two flours and yeast and mix with a spatula to combine. Add in the tangzhong mixture and stir to combine. Then knead on low speed for anything from 8-11 minutes. You want to get the window pane effect where you can pull apart the bread gently without it breaking and you get a translucent "window". It is a touch harder with wholemeal flour than it is with plain bread flour so windowpanes may not be as big as normal-an inch or two is fine. Roll into a ball and place in a bowl (I scrape down the sides of the mixer bowl and use that) and cover with cling film. Since it is cold, I also put this bowl in a bowl of hot water, changing the hot water 2-3 times. You want it around 2-3 times its original size and it will take around an hour. 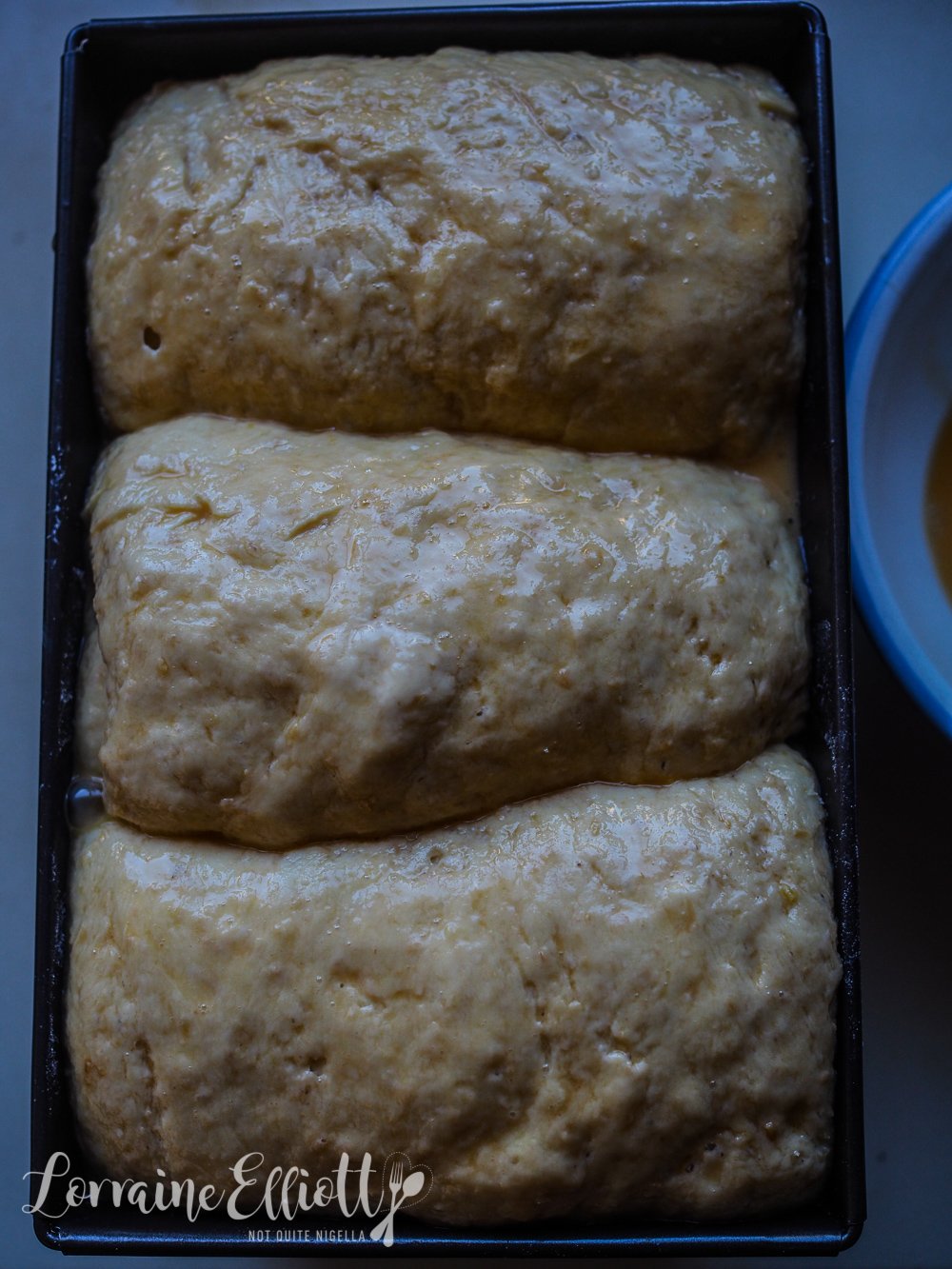 Step 3 - Preheat oven to 170C/348f and spray a loaf tin with oil. Knead in the salt and then divide the dough into three even pieces. Flour a surface and roll out each of the three pieces into a rectangle around the same width as the tin. Roll up like a Swiss roll and repeat with the other two pieces of dough. Cover with cling film and again place in some hot water until it has risen again, around 20 minutes. Gently brush with the egg wash and bake for 30-35 minutes. 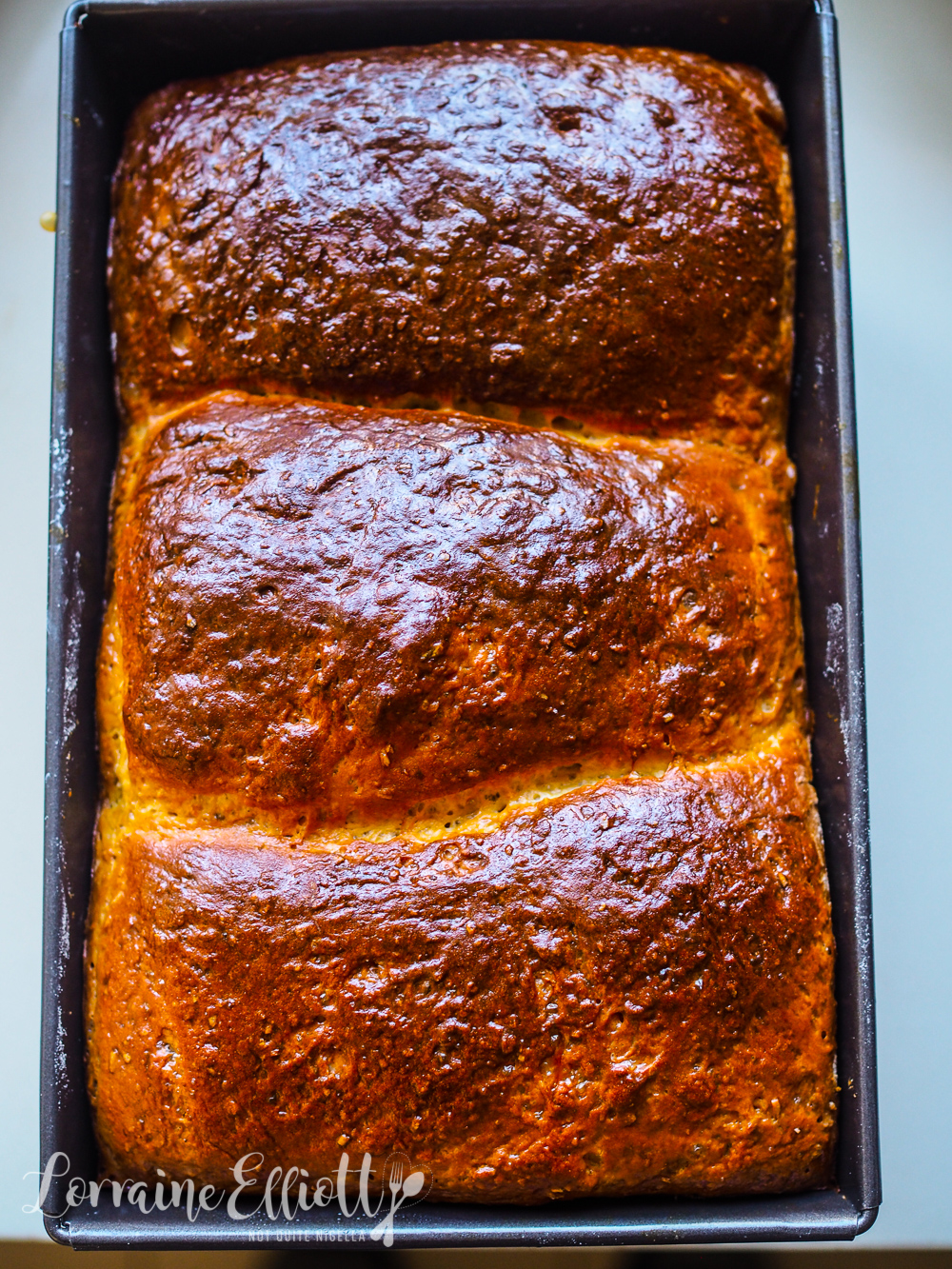