How To Make Perfect Brown Rice {with Japanese Omelette} 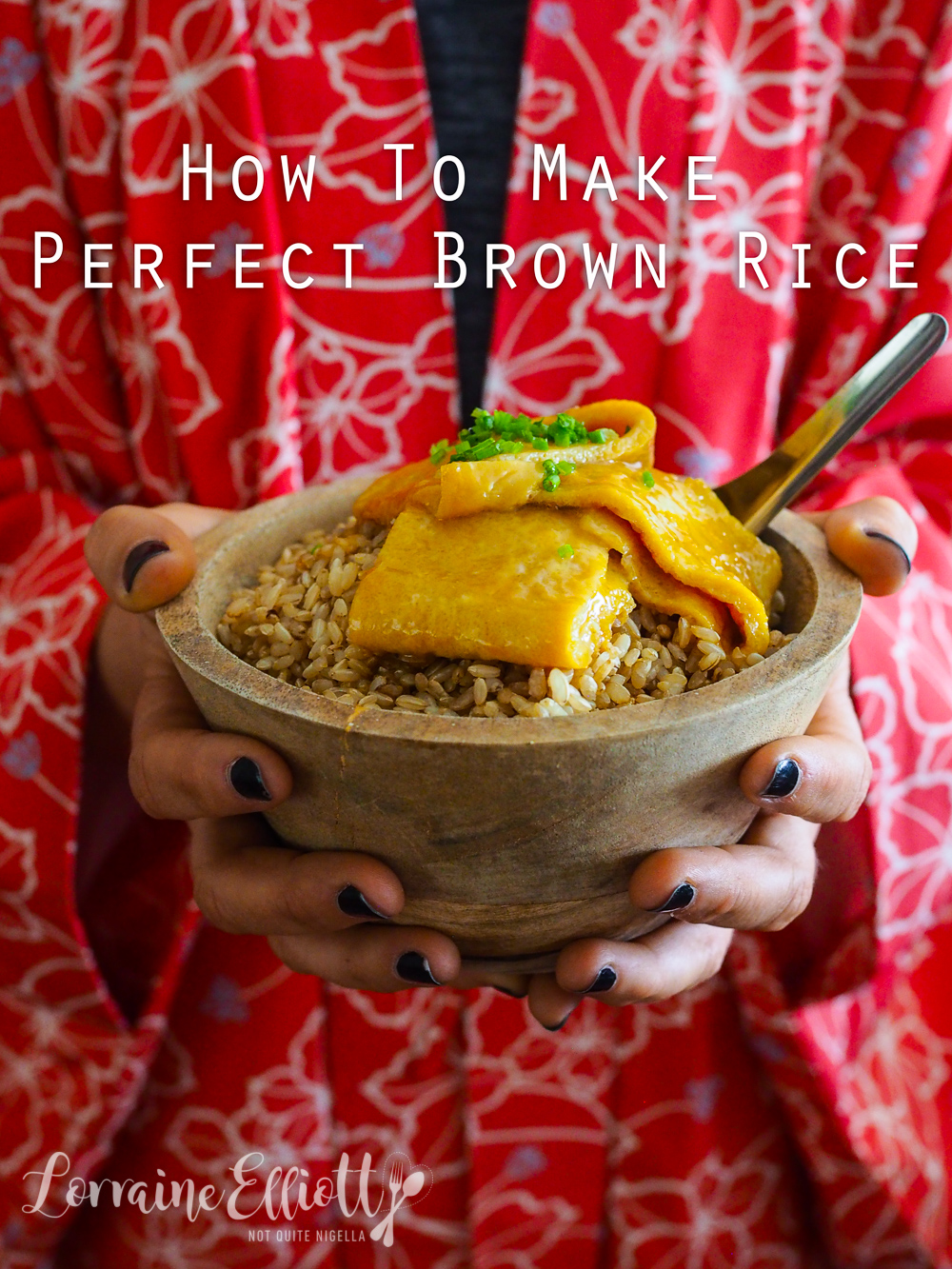 Brown rice can be a vexing item to cook. You can either end up with rice that is hard and uncooked in the centre or you can end up with sludgy, sticky rice after an hour of cooking. Neither of which are satisfactory or appealing. Do you want to know the best way to cook brown rice, that doesn't take too long? Read on Dear Reader!

I consider cooking brown rice similar to poaching eggs, one of those so-called simple things that most people find difficult. I mean we all want to eat brown rice (well sort of) because it's healthier but when it doesn't work you basically sort of give up on it (or is that just me?).

This recipe is from the lovely permaculture guru Cecilia Macauley who also showed me how to make shiso tea and the most delicious soba salad. All you need to make the perfect brown rice is a pressure cooker or instant pot. You wash the rice three times and then soak it for 30 minutes in water and then cook it on high for 25 minutes in the pressure cooker in the ratio detailed below. Each grain is perfectly cooked - Cecilia calls it "caviar" as it pops in your mouth.

This recipe has a little extra recipe. You see I'm not one to sit down and eat a bowl of brown rice by itself but Cecilia served me some brown rice topped with this gorgeous egg omelette. I couldn't stop thinking about it. The egg omelette has three ingredients in it so it is very simple but the key is to not overcook it. Just stop once it is starting to get that glazed jelly on top. I promise, it's delightful. 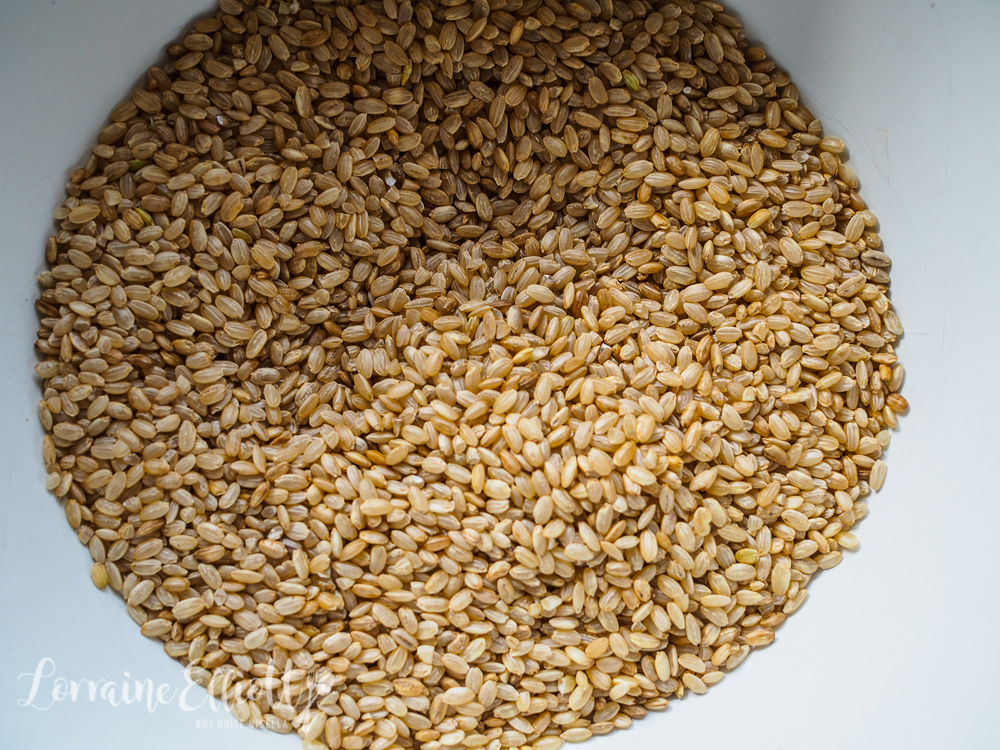 Nina helped me with these photos and she's a big omelette eater. In fact she makes an omelette and salad very single night to eat (she hates cooking and needs protein). I asked her to come up before our training session to hold a bowl for the photo. She donned the kimono she gave me one year for Christmas and we were done.

Then we went downstairs to train. She told me that on the weekend she was in a particularly bad mood. Nothing could lift her spirits. She woke up on Sunday, opened one eye and wondered if Garth was going to take their dog Marley for a walk. He didn't. This put her in a worse mood and a real "Why do I have to do everything?" state of mind. She didn't want to think at all and when Garth asked if she would like to go for breakfast and asked her to choose where, she just wanted him to pick. After a bit of sighing and eye rolling she decided she didn't want breakfast at all, "Just get me a cappuccino," she told Garth sullenly. 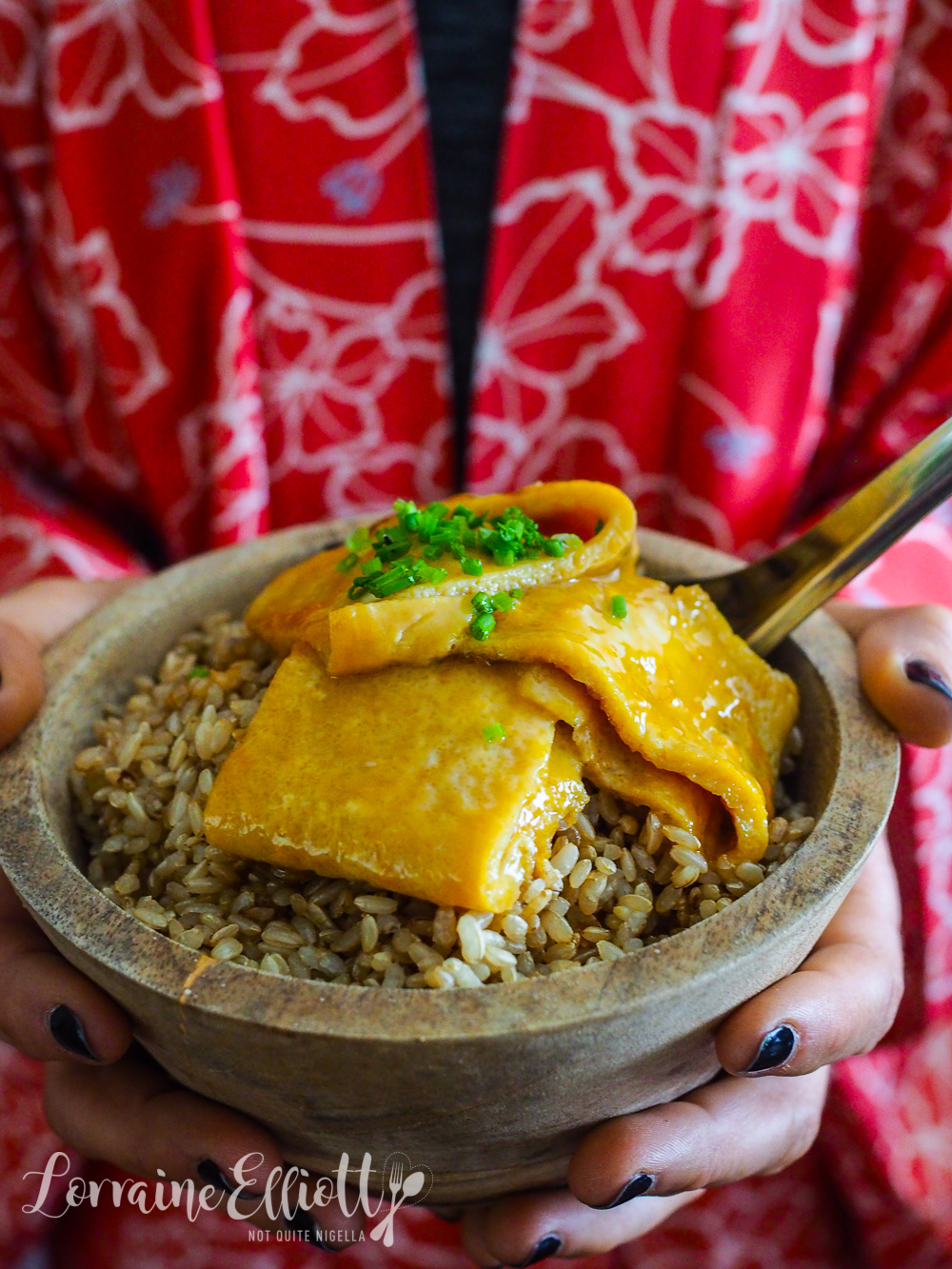 He returned with drinks for both of them and she took her drink. He decided to distract their dog Marley so he kicked a small ball at him. The ball bounced a weird way and hit the bottom of Nina's coffee cup and sent her whole coffee raining down on her legs and her brand new suede Vans. She started crying and then this morphed into laughing because of the absolutely terrible day she was having. I'd like to say that this lightened her mood straight after but I suspect this was just a break in the weather.

So tell me Dear Reader, do you find brown rice hard to cook? What lifts your mood? Or does time just have to pass?

How To Make Perfect Brown Rice {with Japanese Omelette}

Step 1 - Wash the rice three times, gently. Fill a bowl with water and soak the rice for 30 minutes. Then drain the rice and fill with the 600ml water. Place pressure cooker on high and cook for 25 minutes. 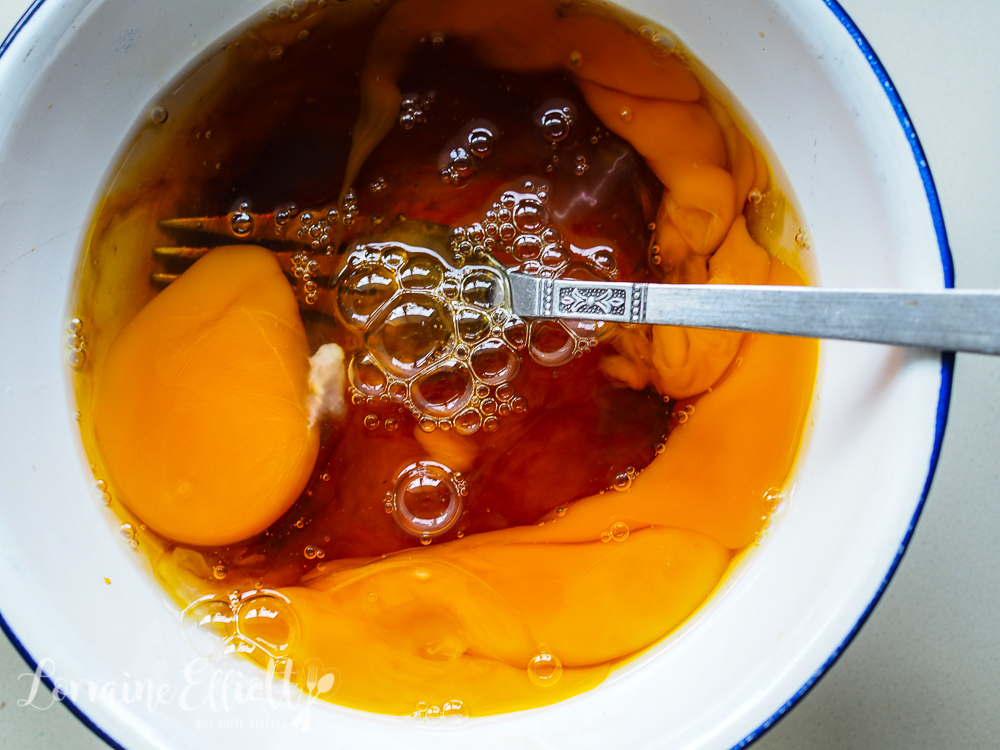 Step 1 - Whisk the eggs with the soy sauce and mirin until well incorporated. Heat a pan on medium high heat. Add the oil or butter and melt. Then pour in the egg and turn down to low medium heat. Watch the egg-you want it to set at the bottom but you want a glossy, jellied top that is quivering and just set. This is enough for 1-2 people. 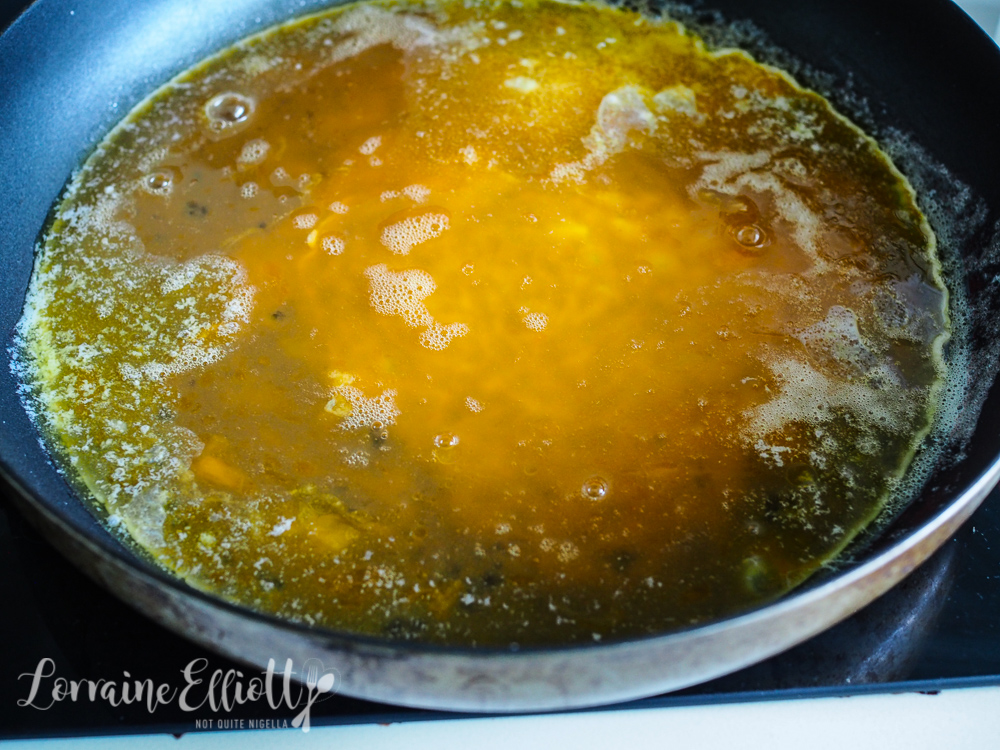 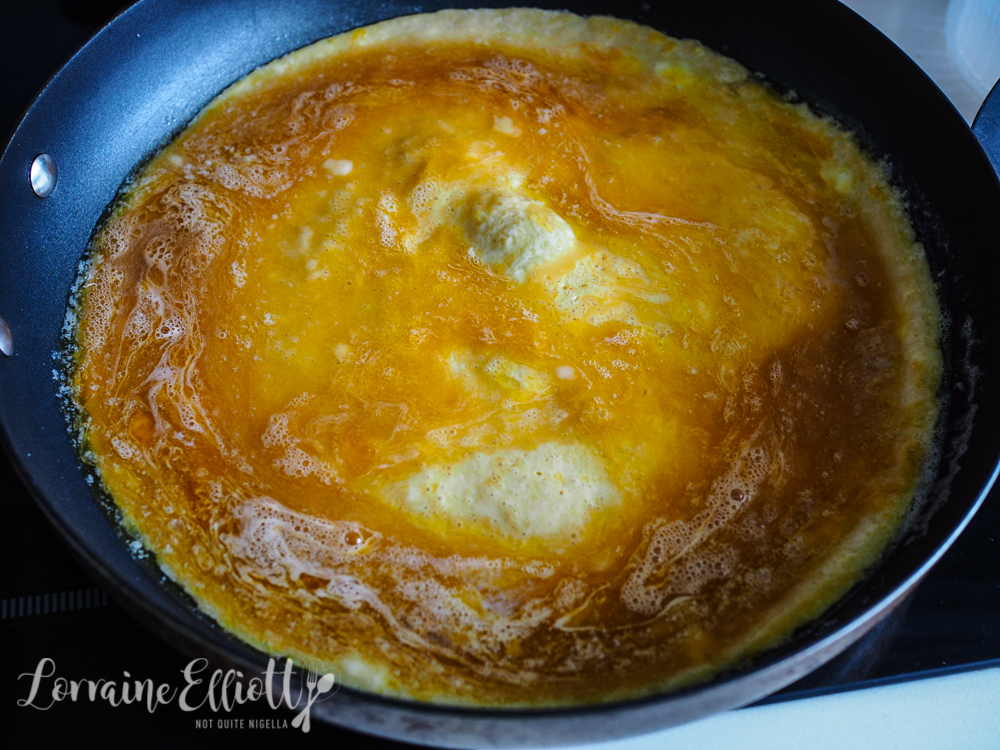 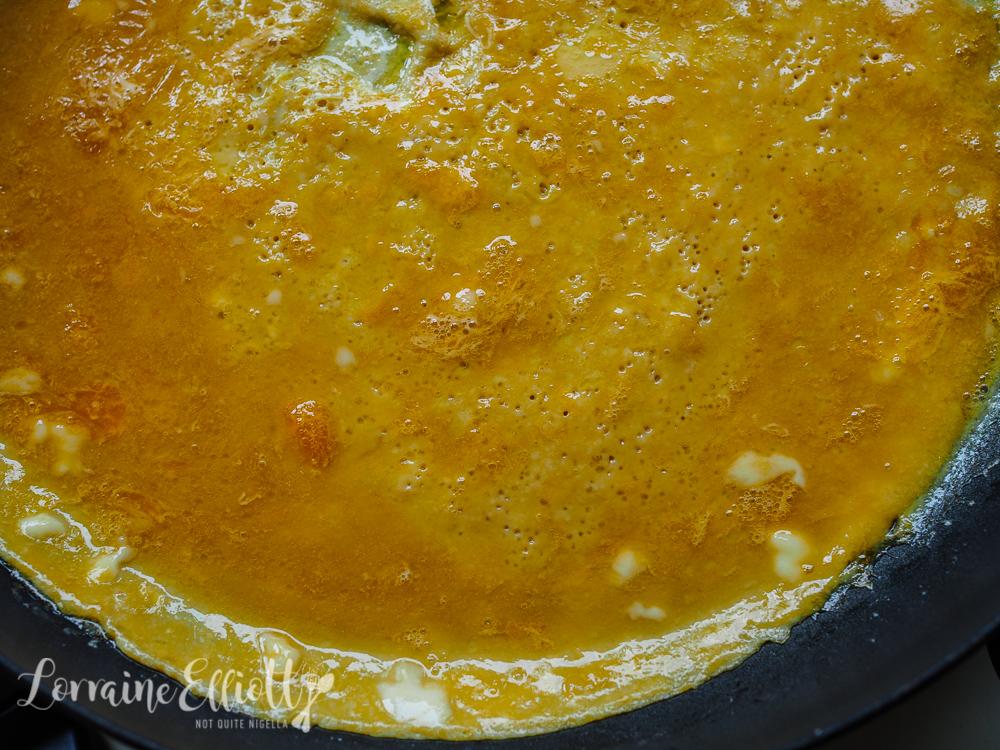