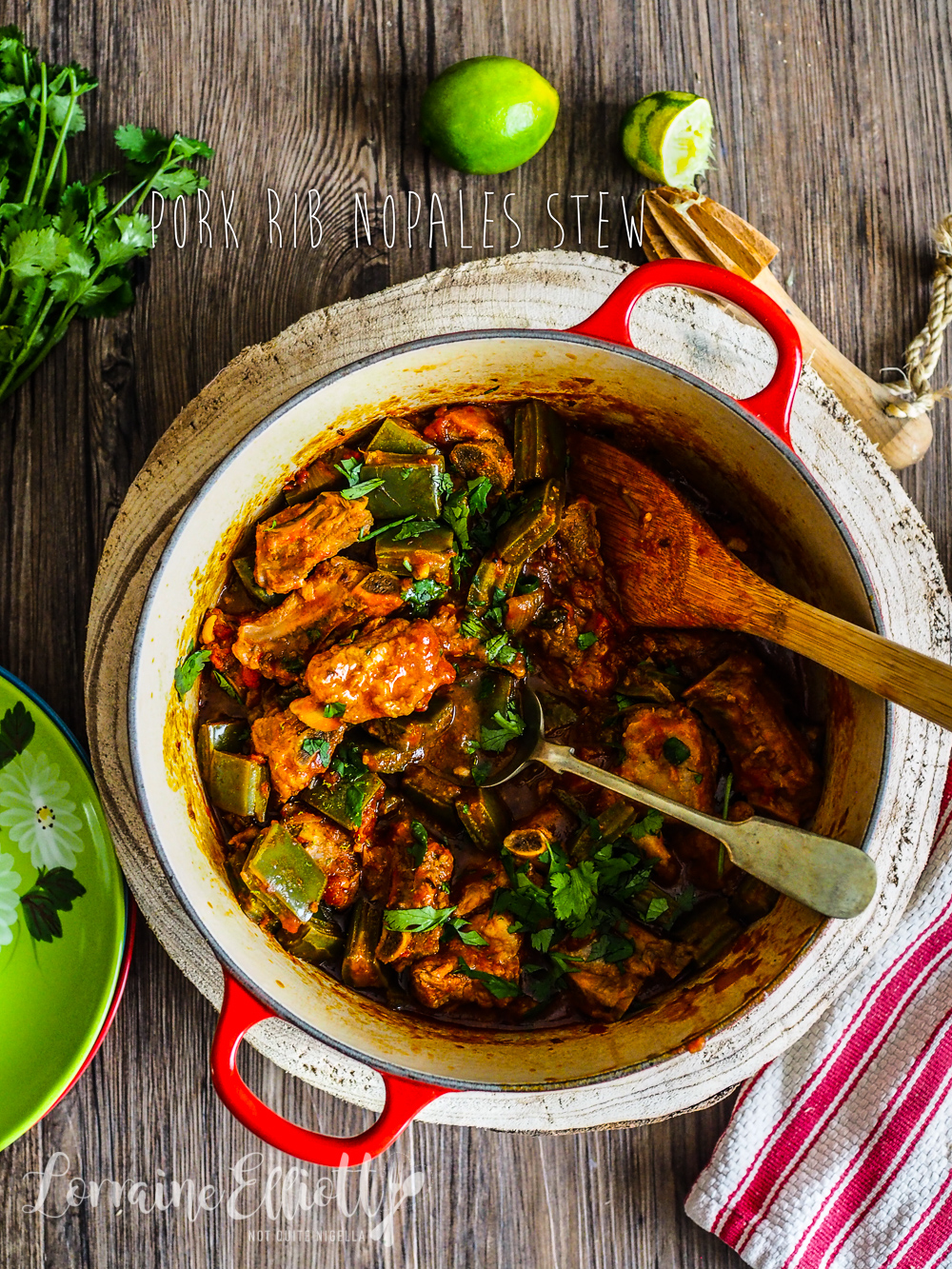 I know that putting up one cactus recipe was possibly crazy but I have another for you. This Mexican pork rib stew is all soft pork ribs, spicy, tangy sauce and pieces of lemony cactus. Don't worry if you don't have access to cactus, substitute it with your favourite vegetables because the pork ribs in this are so lip smackingly tasty that Mr NQN ate this whole recipe in two sittings.

Cactus is really more an ingredient that you find in Mexico and in states of America where there is a large Mexican population. There you can find paddles of cactus piled high on tables.

Cactus pads aka nopales or the leaves of the prickly pear are easy enough to deal with if you have a sharp knife. You just shave the spines off and then cut around the paddle and chop it into bite sized pieces (I also discard the bit towards the bottom of the paddle where it would attach to the rest of the cactus as that can be tough). They are prickly things although the spines of the prickly pear cacti are spaced wide enough so you can grab onto them. I've only pricked myself twice and the spines are so thin they're not very painful. 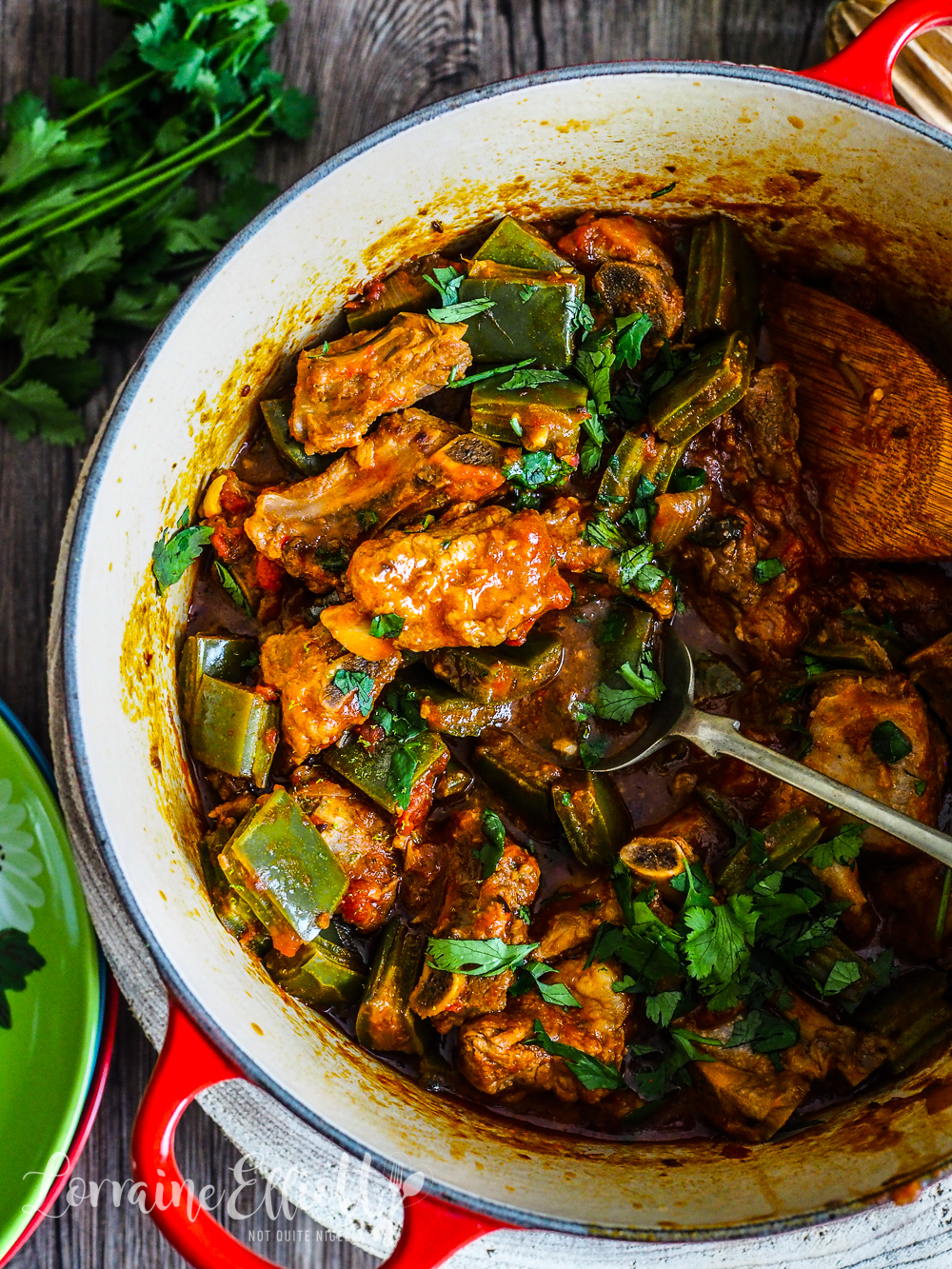 Sometimes I meet people that are a bit prickly. Usually I find people are really pleasant and easy to talk to and that's why I enjoy meeting and talking to people. But I recently met someone that I'm pretty sure hates me. Every time I see her she looks me up and down with a sneer and a roll of her eyes and I actually have no idea why she feels that way but you know I don't really care enough to enquire or fix the situation. Sometimes people just hate you and that's fine, it's really their problem.

Thankfully I rarely see her but I had to a few weeks ago. There was an event and I arrived early because I was told the wrong time (along with another girl who also arrived early). When I arrived and saw her there with nobody else I dreaded having to sit there with her. "Oh I thought we were meant to arrive at 12:30..."I said to no-one in particular. 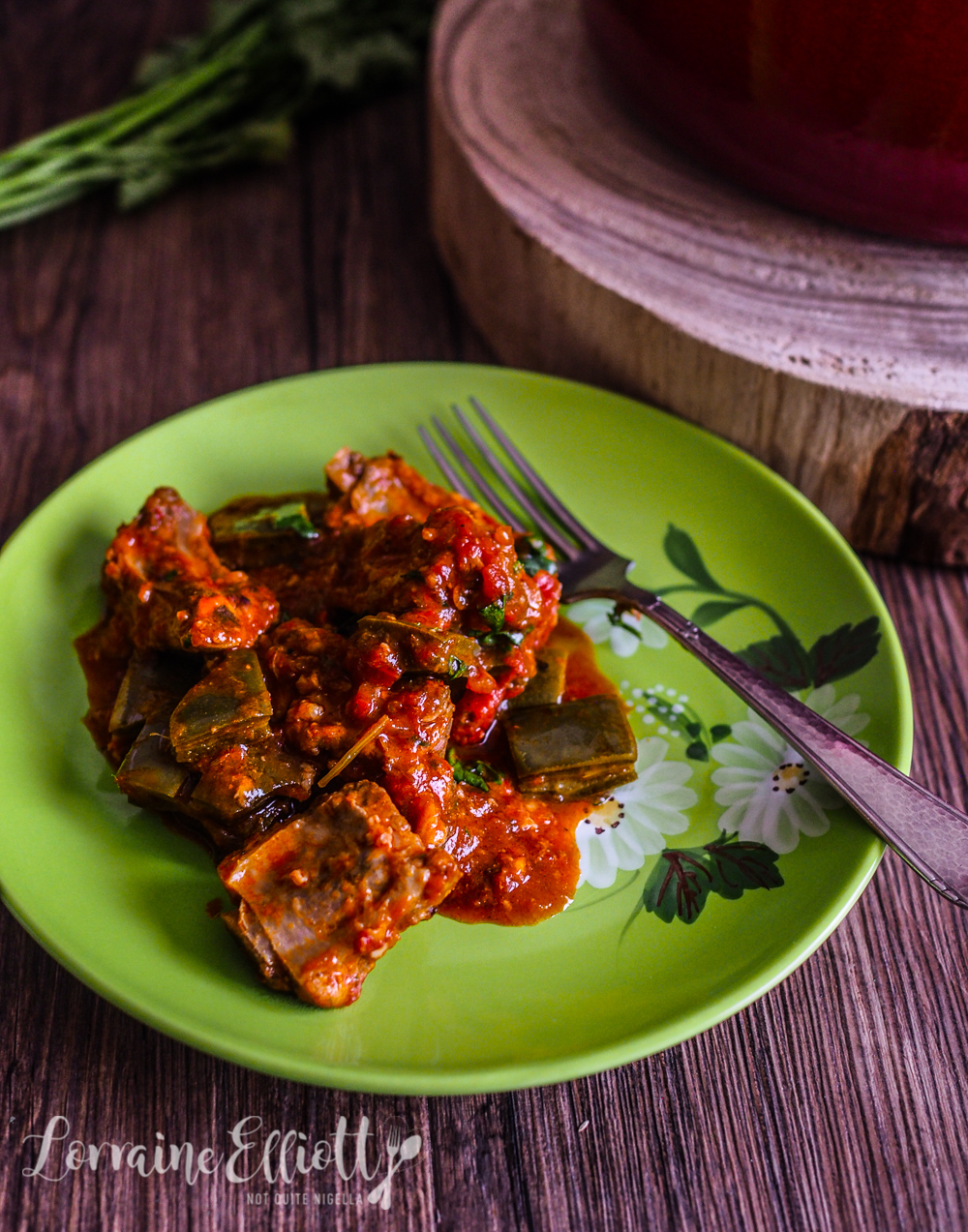 "Well they must have told you the wrong time so you'd turn up on time since you're always late," she said, in her little girl voice but with a distinctive hiss of malice to it. I looked at this woman, unhappy in her life, with her little girl voice and contorted expression of loathing and dubbed her the prickly pear. If only she were appetising as cactus! I made sure we were seated far away from each other too ;)

So tell me Dear Reader, do you find most people pleasant and easy to talk to? Have you ever met someone that just hasn't liked you? And would you or have you ever cooked with cactus? 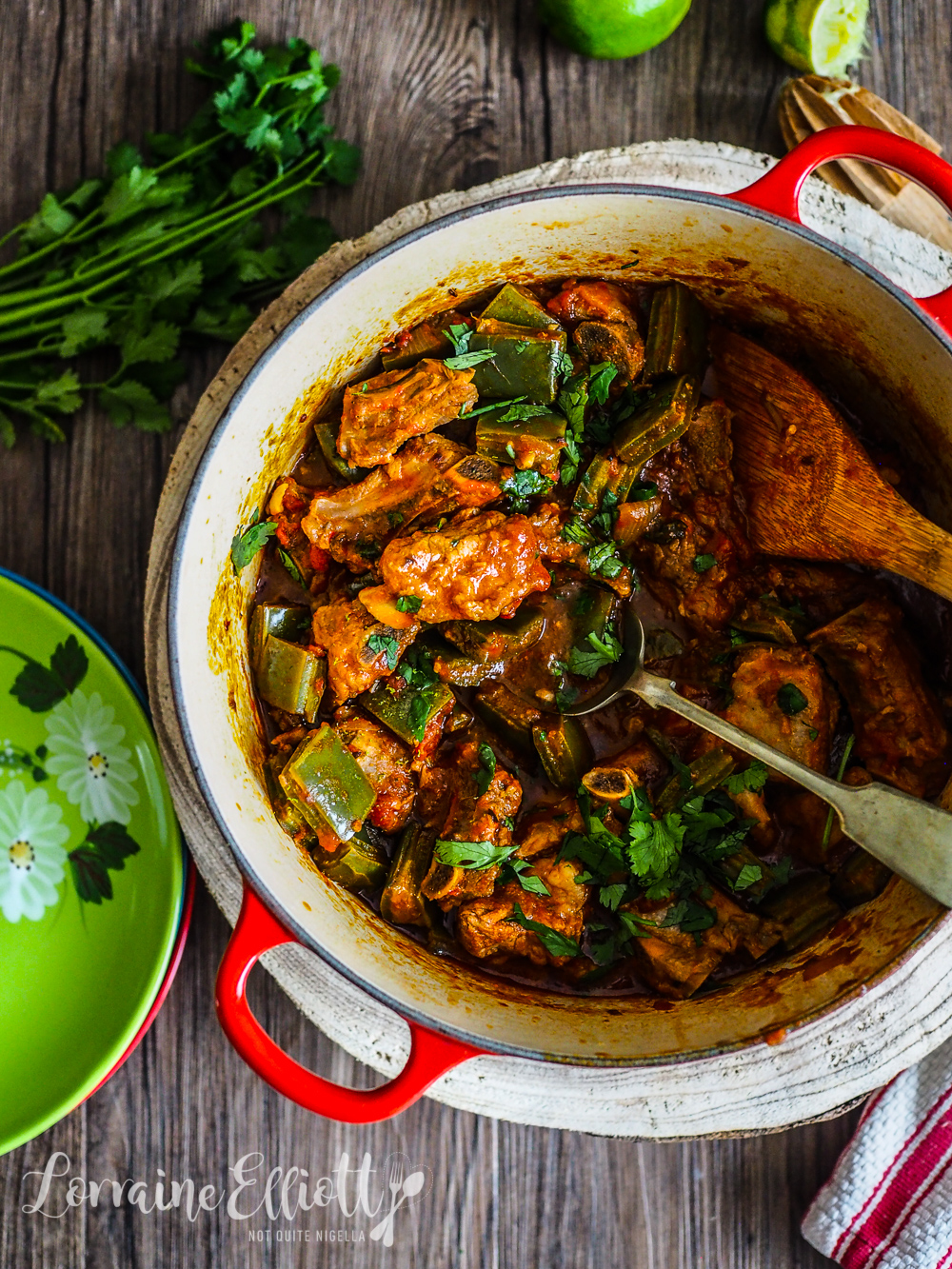 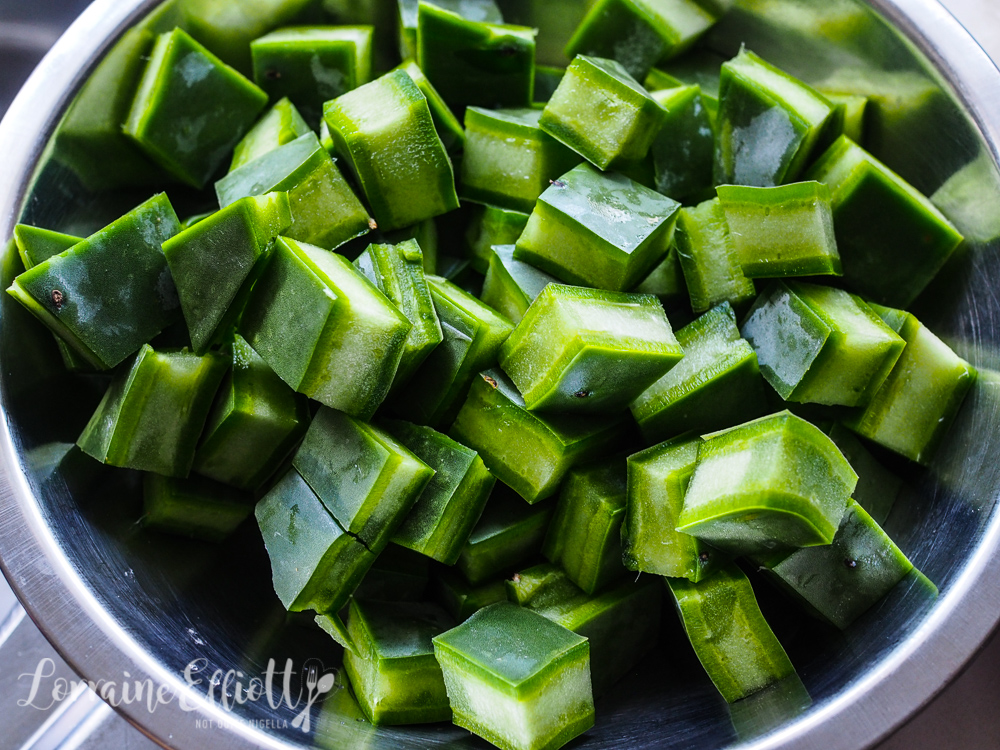 Step 1 - Firstly boil the cactus for 10 minutes in plenty of salted, boiling water and then strain and set aside. I do this first as I hate washing up and just use the same pot but you can use a different pot and do this while the whole stew is cooking. 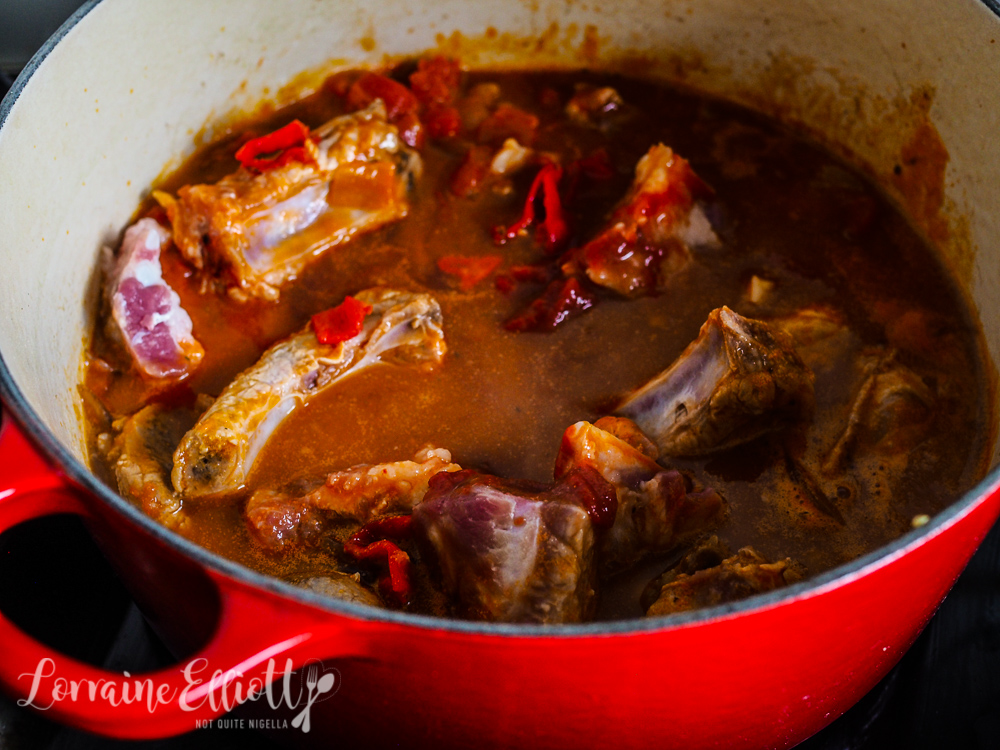 Step 2 - Heat the oil in a large pot with a lid and saute the onions for a few minutes until turning translucent and then add the garlic. Then add the pork short ribs and brown a little. Add the chicken stock, tomatoes, tomato paste, cumin seeds, lime zest and juice and the coriander roots chopped into 1 inch pieces (leave the coriander leaves for later) and the chillies. Bring to a simmer and cook for 1 hour with the lid on. 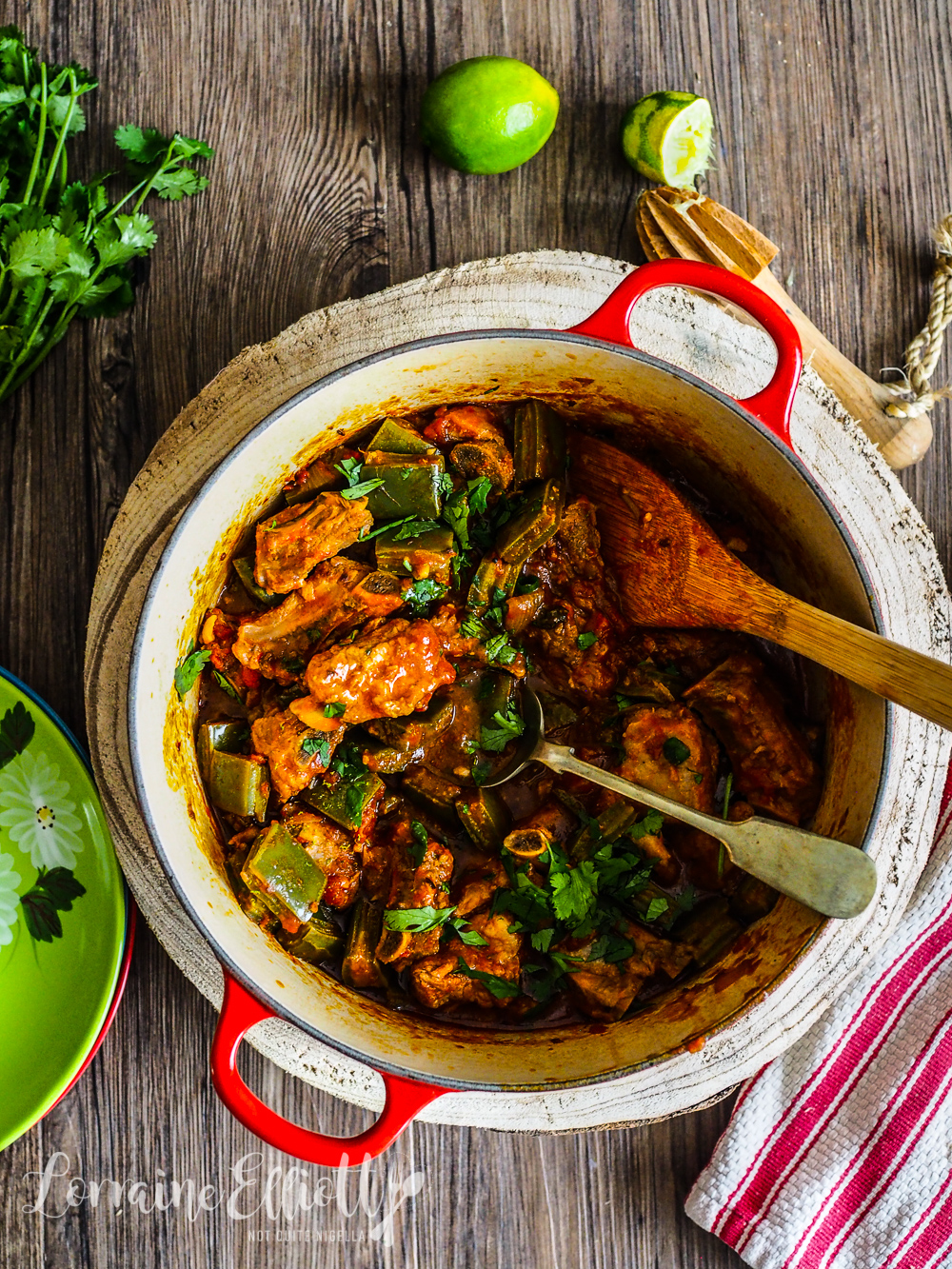 Step 3 - Then add the cactus into the pot and simmer for 30 minutes with the lid off reducing the liquid and making sure that it doesn't catch on the bottom of the pot. Season with salt, pepper and sugar. Sprinkle with coriander leaves for serving.