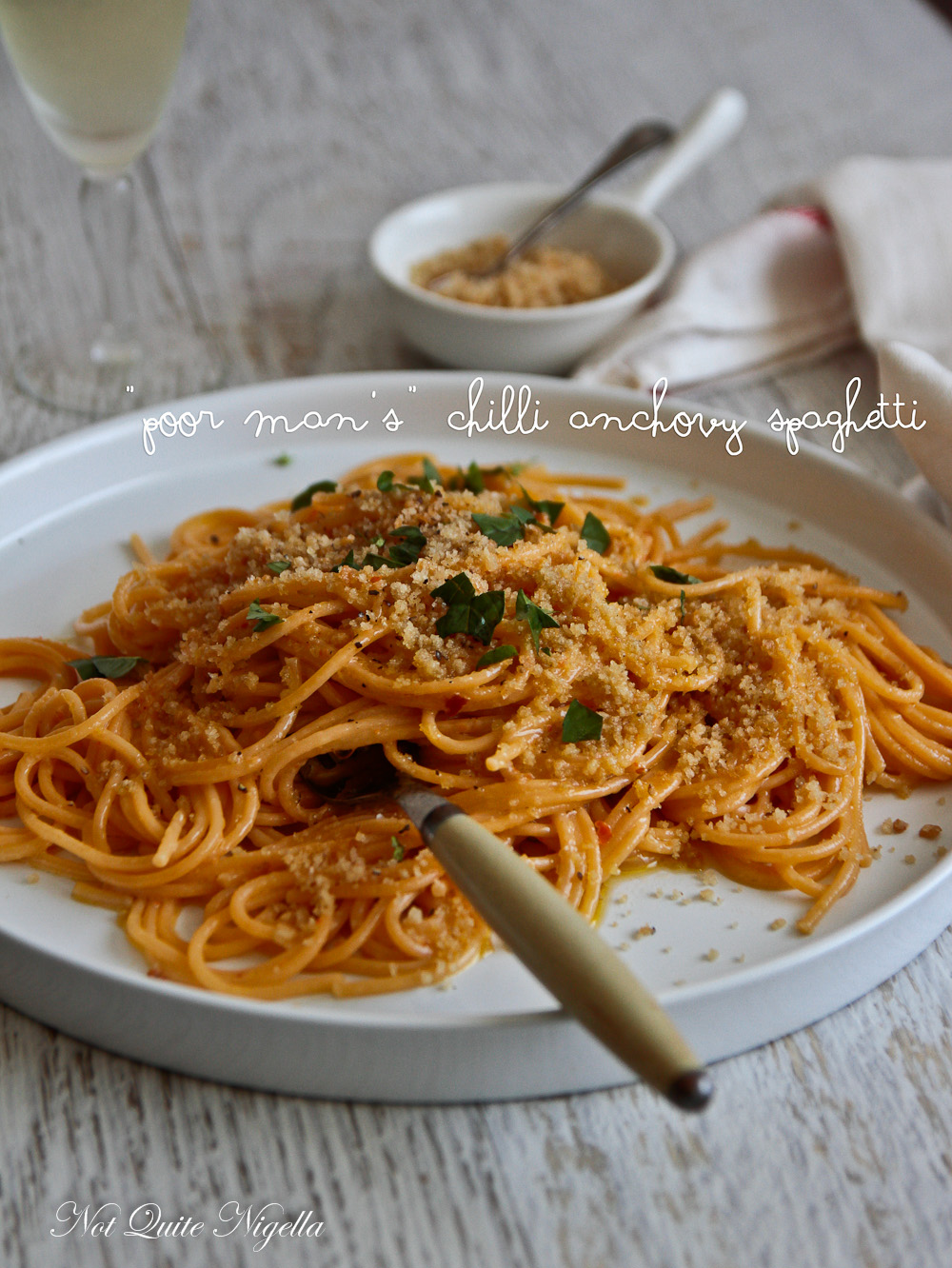 An easy dish with pasta that you can keep in the fridge on standby, this anchovy, breadcrumb spaghetti has many versions that abound. It was originally created to make use of less expensive ingredients the breadcrumbs and anchovy replacing parmesan cheese. It's a dish that can be done in 15 minutes making it perfect for a weeknight dinner.

So it's been a few years since I dived into the pool of drivers and got my driver's license. And ever since then I've met so many others that have started the long, long journey of getting a driver's license. In Australia it is not easy to get a license and usually requires several attempts and several types of tests. Gone are those days where you drove around the corner, the person with a clipboard ticked yes and you were on your way.

I do feel for my friends that are getting their licenses. I don't know if I told you but I am now on my blacks i.e. my full license. Mr NQN was slightly miffed that I got a gold license straight away. He was under the impression that one had to have a spotless driving record for 10 years to get one (which he has) whereas this blow-in that he taught got one straight away. Oh the injustice! 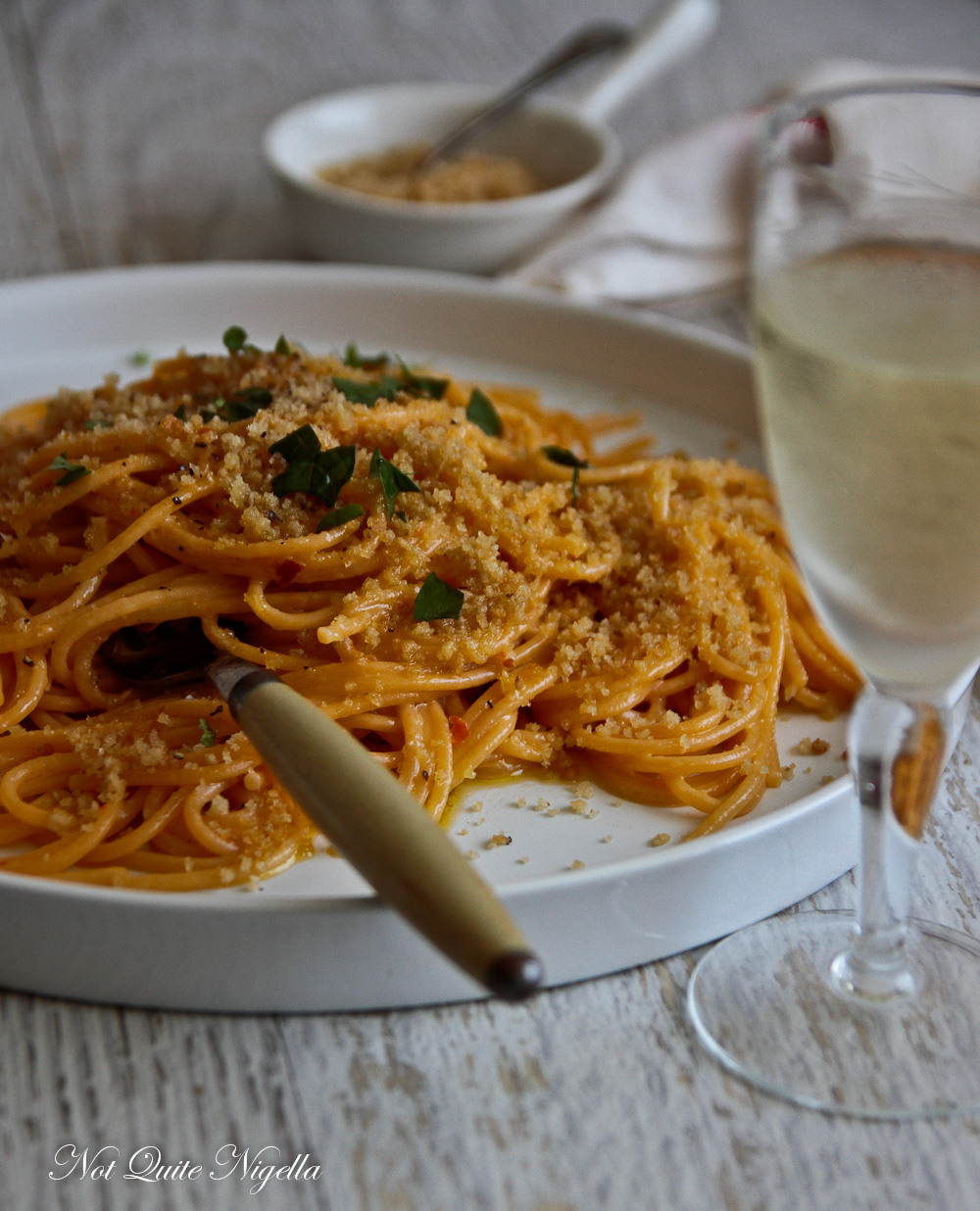 I'm still learning although I do try to challenge him at times especially when I send him pictures of my parks. I'm perversely proud of my parallel parking. Truthfully, we have a reserve camera so it's not so much my skill that helps but reverse parallel parking was always the hardest thing for me. But now I can go through tunnels without freaking out and thinking that I am going to hit the wall. The only thing left is long distance driving. I'll happily drive around Sydney even over that confusing mess that is the Harbour Bridge but road trips are another matter. Driving for over two hours is a bit much for me, especially if I have other car related tasks like being the car DJ. Short and sweet trips are it for me!

I like short and sweet when it comes to cooking too. I was talking to a friend of a relative over dinner and he was saying that he is the cook in the family. He is often tasked with making dinner and one thing that always has on standby is an anchovy breadcrumb mix in a jar. Anchovies and breadcrumbs were often used in Cucina Povera or cooking of the poor in Sicily, Italy in place of using parmesan cheese.

I decided to go with his suggestion and ever since then I've been able to make dinner in about 15 minutes. I like to add chilli to it to boost the flavour and I also used a chilli spaghetti but it works just as well with regular spaghetti. The cream isn't part of this dish traditionally but I thought it lent the sauce a nice finish. Leave it out or add it in, depending on what you like.

So tell me Dear Reader, do you enjoy driving? Do you prefer short or long drives? 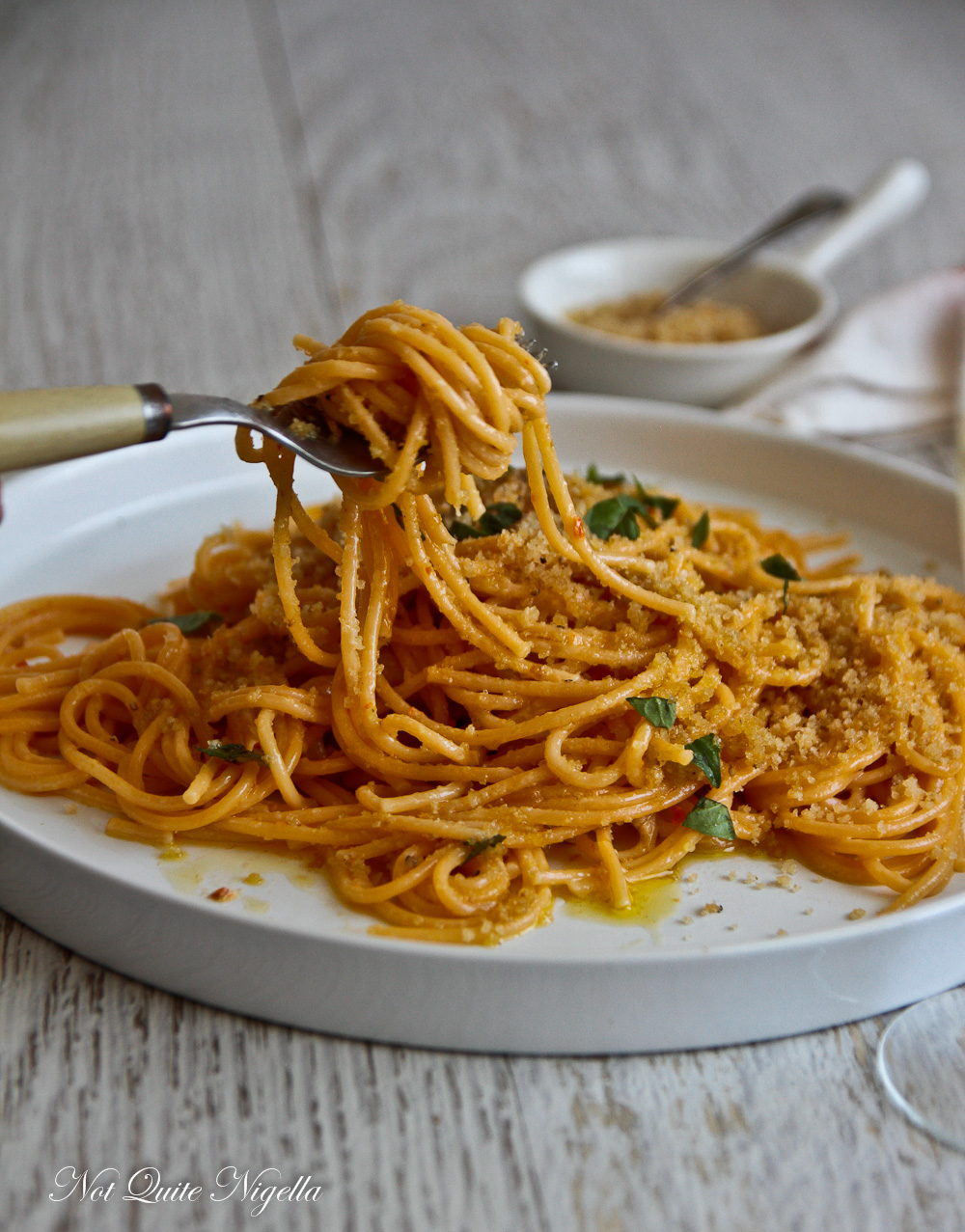 Spaghetti With Anchovy, Chilli and Breadcrumbs

Step 1 - Cook the spaghetti in plenty of boiling water according to direction knocking a couple of minutes off the cooking time.

Step 2 - While it is cooking, place the breadcrumbs, anchovies, garlic and 4 tablespoons of olive oil in a small food processor and whiz together. You can store this in the fridge as there is extra here and you can then whip up this dish again. It can keep for a month (or even more perhaps) in the fridge. If you are using it straight away, toast the breadcrumb mix in a small frypan. Set aside in a bowl.

*Step 4 - * Serve on plates and spoon over with the toasted breadcrumbs (in the same way that you would distribute parmesan cheese).