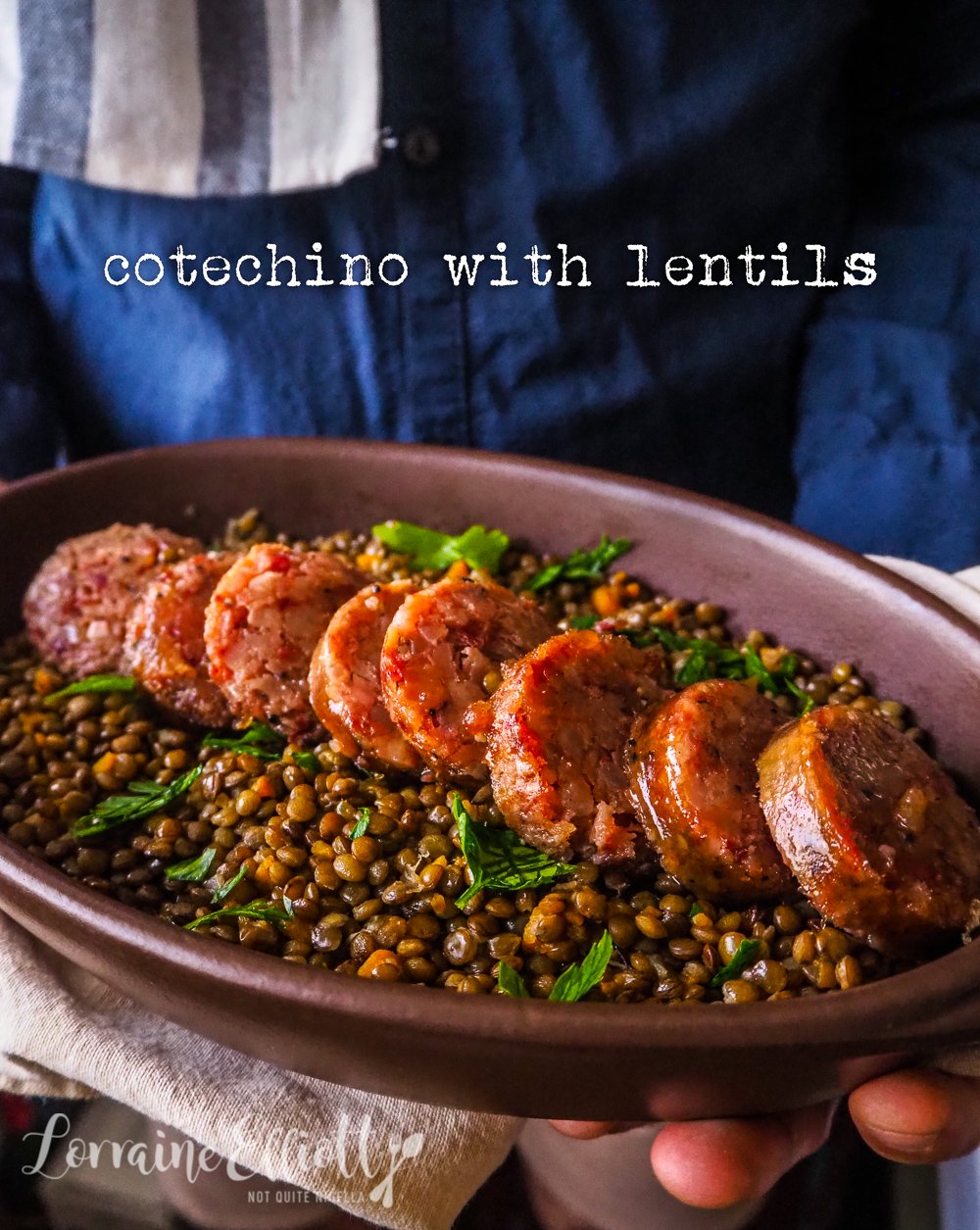 Want to usher in the new year like they do in Italy? Cotechino with lentils is the traditional dish to serve in Italy. Hailing from the Modena region, it is a divine tasting, thick sausage made using pork rind and secondary cuts of pork. It's served on a bed of lentils, sliced up so that it resembles coins thus ensuring the eater a year of prosperity.

I remember the first time I tried cotechino. I was in Modena, Italy. We didn't have long in this town but we still managed to hit most of the food that Modena is known for. And when I saw cotechino I did a double take. I'm someone that doesn't shy away from fat in food (OBVIOUSLY with my butter and pork crackling addictions) and it was the specks of white that dotted the glistening slices that caught my eye.

It was cold outside and I see logic in warming up from the inside - perhaps it's my greedy nature justifying itself. So I took a bite into a hot slice of cotechino sausage. The texture was melting and juicy, just how you want a fat sausage to be. Not lean or dry, just the wonderful sensation of tooth on juicy meat and mild, sweet spices. It was served with salsa verde and every time I saw it on the menu I'd order it. 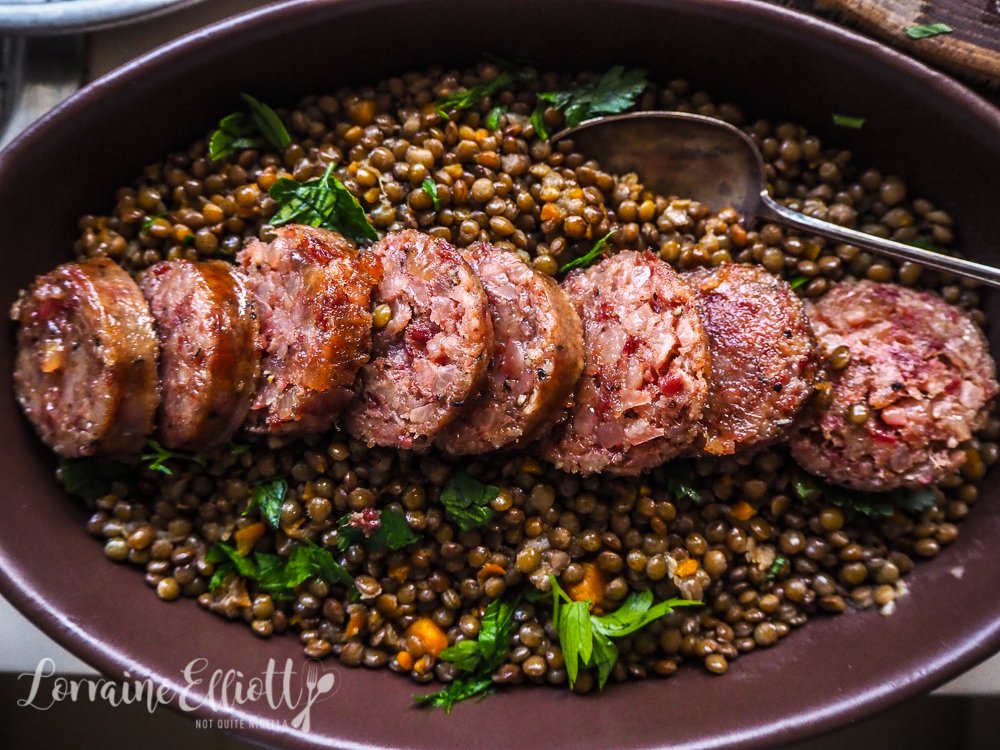 Cotechino comes from the word cotica which means pork rind. It's not a part of the pig that you usually put in a sausage because it takes so long to cook. In fact Cotechino simmers for a couple of hours so that the pork rind becomes meltingly good. Cotechino with lentils is the antithesis of fast food and defines slow food. It is boiled on low heat for several hours to render the rind soft. The lentils of course must be soaked overnight too. So it's not the sort of dish you do when you're in a hurry.

You can buy cotechino from Italian delis and butchers. I bought some at Paesanella in Marrickville. I actually tried my hand at making one and while it was good, it didn't remind me of the ones in Modena so I cut my losses and went with the commercial one.

I was disappointed because I had been rushing around just before Christmas gathering the bits and pieces for it. I was doubly disappointed because I had organised myself and thought that I had done everything right. I made a special order with the butcher for the special cuts and grinding specifications only to be told on the day to be told that they couldn't do it and had to dos another shortcut without the rind (which made me realise that it wouldn't have the hallmark cotechino ingredient). Then when I went to buy the sausage casing, the shop that I bought it from recommended me one size which turned out to be half the size of what I needed. So it was a bit of a disaster. But one that I may revisit sometime in the future.

Usually it is served sliced, warm so that the fat melts on the tongue although I prefer it when the slices are lightly pan fried. The slices sit on a bed of lentils and it's a hearty, warming dish perfect for a cold winter's night in Italy. It's probably not as suited to our warm weather during summer but there were no complaints when I did a test run on a balmy night. And I felt like I was imbued with the luck of the Italians!

So tell me Dear Reader, have you ever tried cotechino? Do you have a new year's tradition that you stick to? Or any favourite past New Year's dishes? Which country do you think is the luckiest? 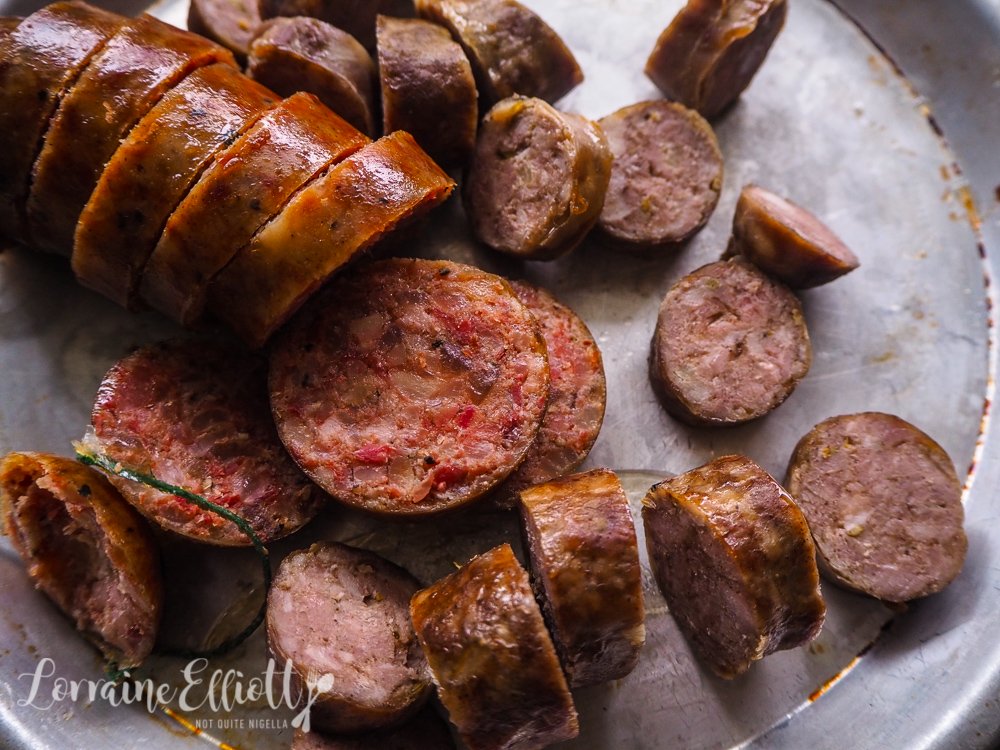 Commercial cotechino vs home made

Cotechino can be found at Italian specialty stores. I bought one at Paesanella in Marrickville. 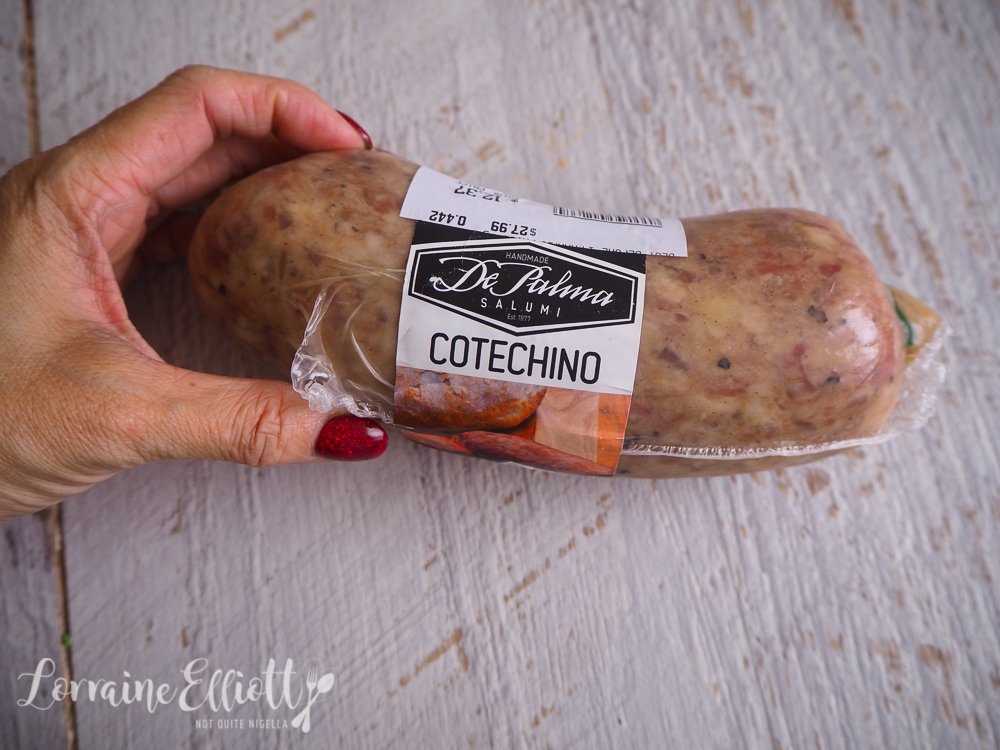 Step 1 - Firstly cook the cotechino. Place a pot of water to boil and then place the cotechino in it. Reduce heat to low and simmer for 2.5 hours or until it floats to the top. At this point you can leave it to cool (which I did as I was going out for the day). I also put the simmering stock in the fridge to separate the fat and I used it as stock for making the lentils. 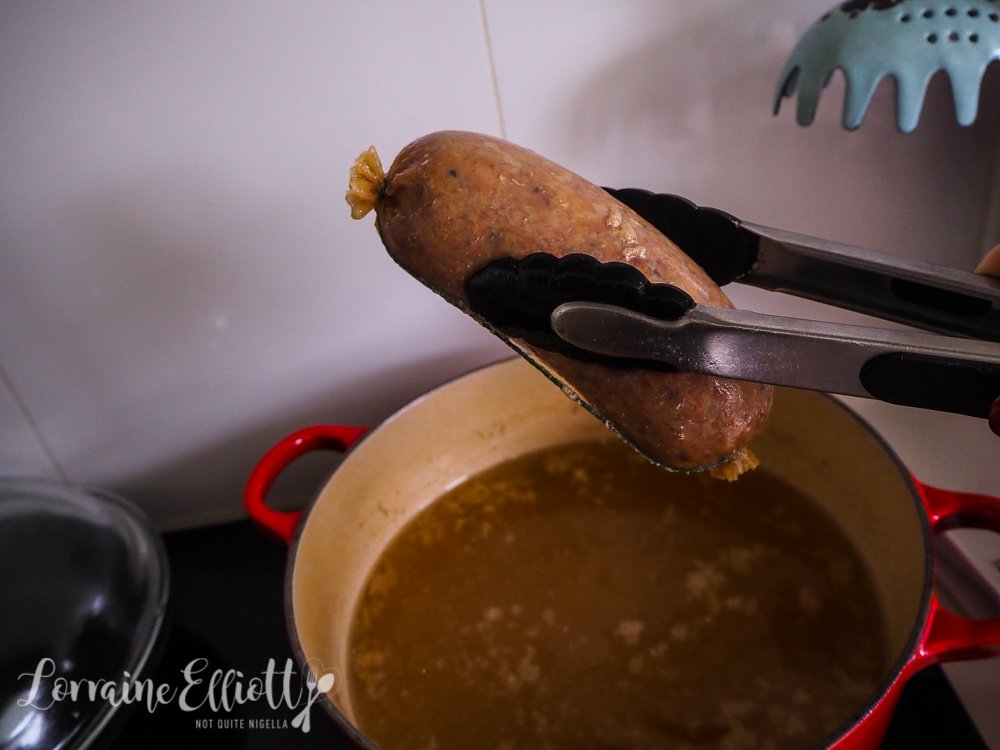 Step 2 - Heat a large pot and heat some oil or fat from the cotechino and saute the onion, carrot and garlic until soft. Add the lentils, bay leaves and stock and place the lid on and bring to a boil and cook with the lid on for 20 minutes. Then remove the lid and cook off the stock for 20 minutes. Season to taste. 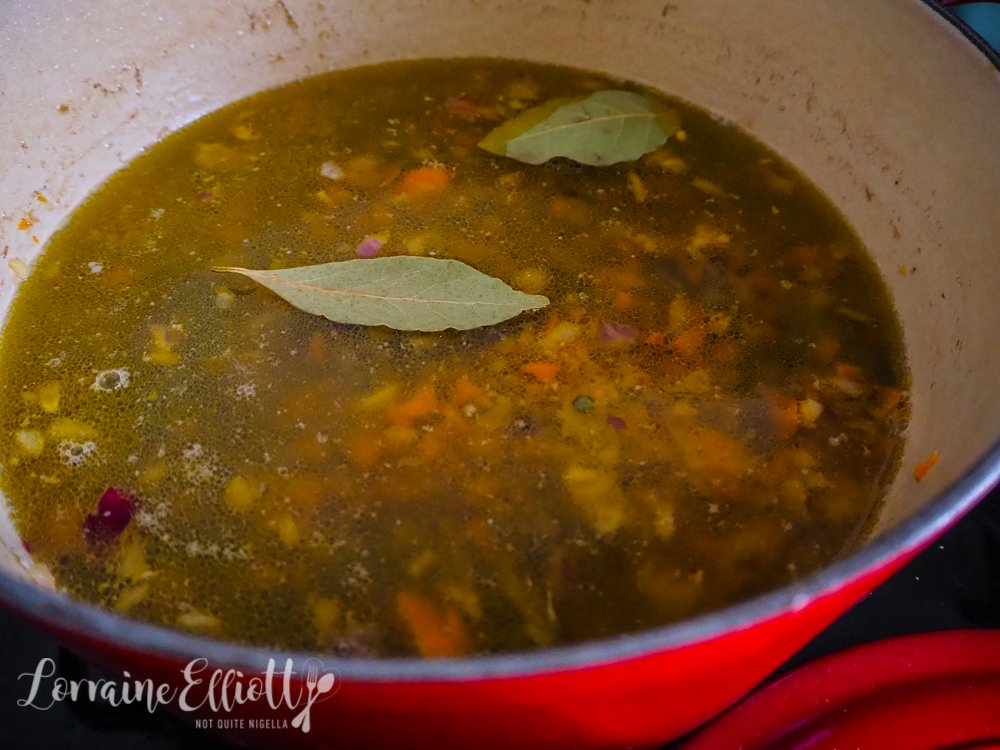 Step 3 - Heat a frypan and slice the cotechino. Add a little oil and pan fry the slices so that they are slightly crisp. Ladle the lentils (removing the bay leaves) in a serving dish with parsley and then place the sliced cotechino on top. 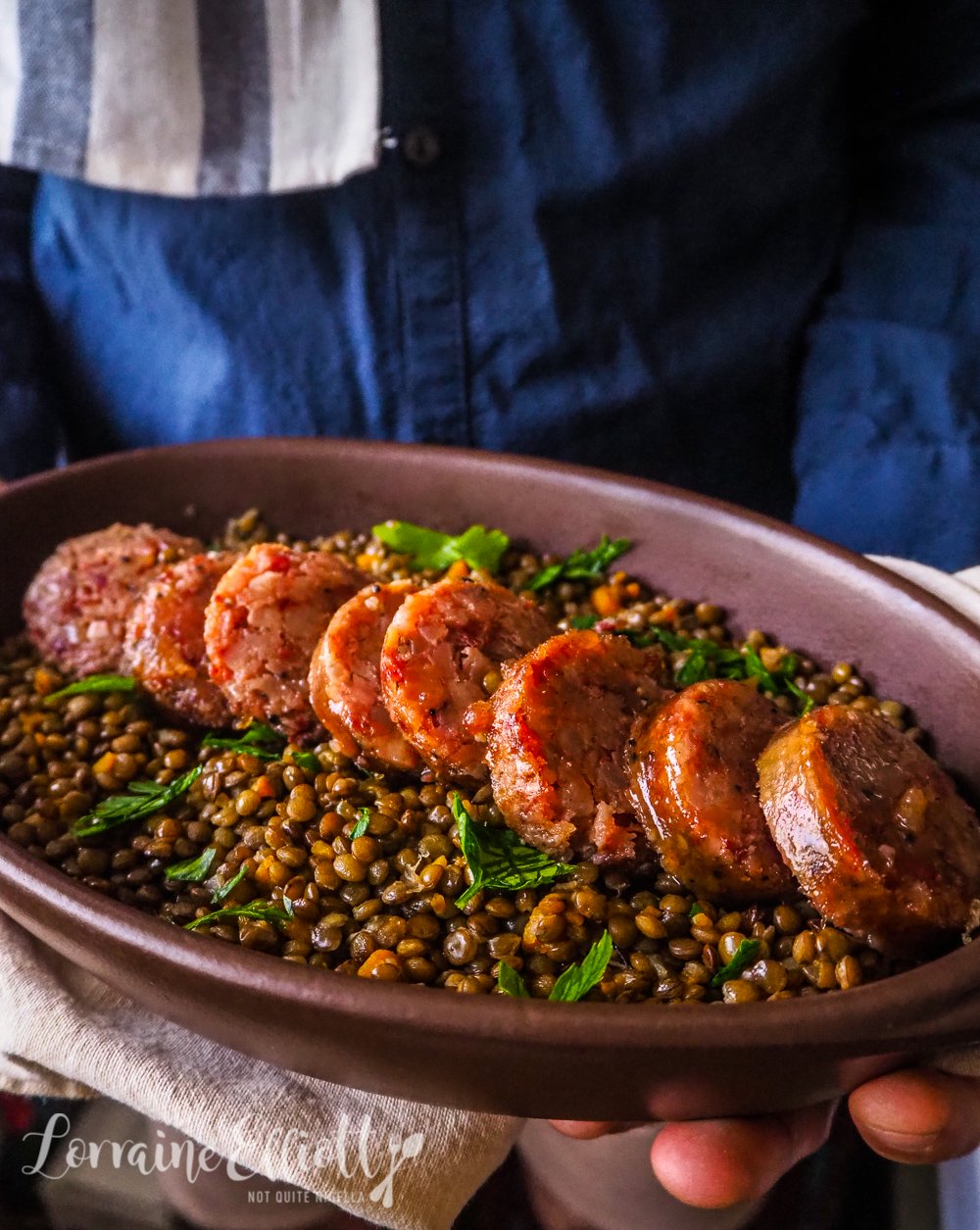