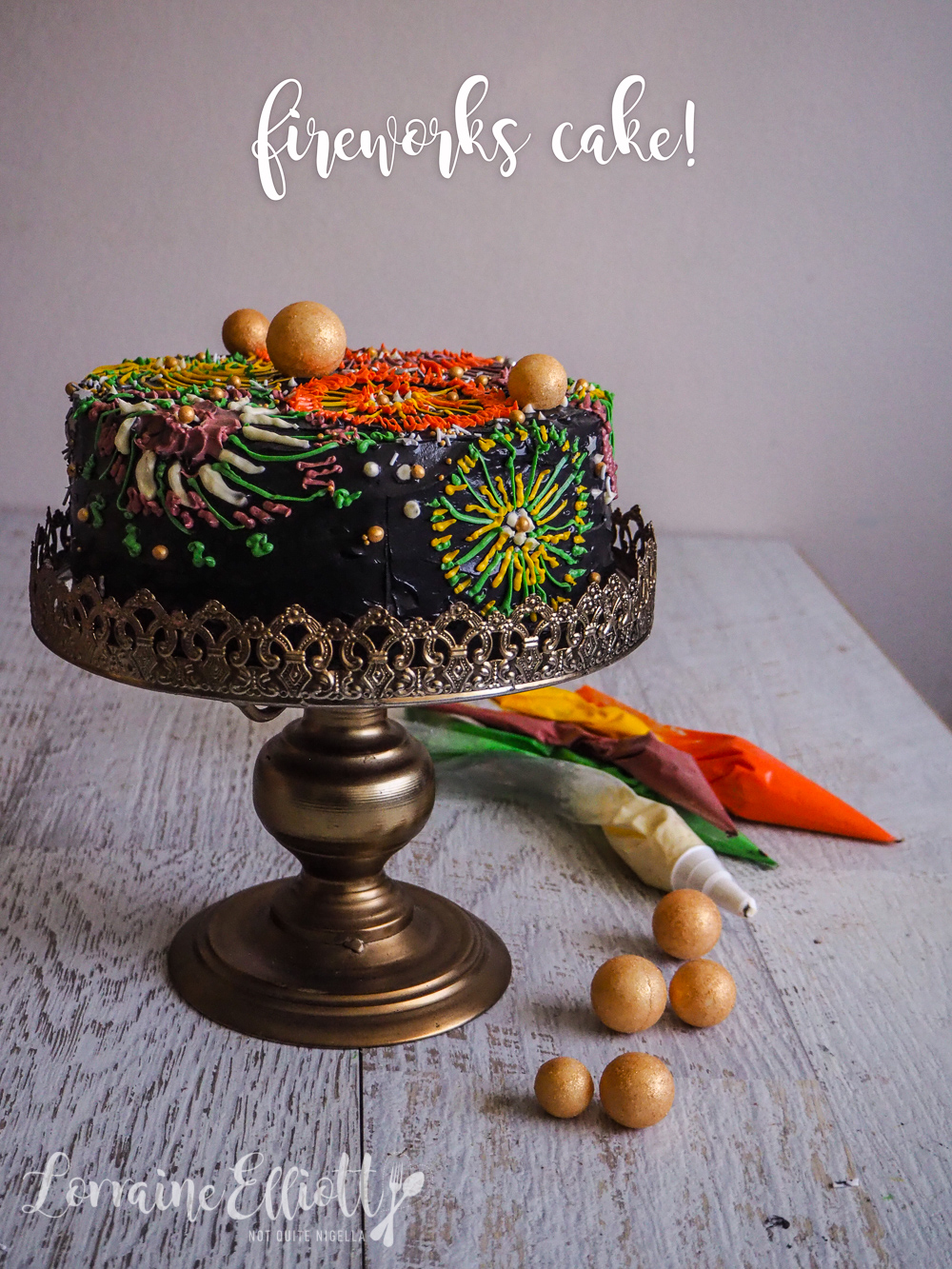 This cake is sure to create fireworks of the good kind. Vasilopita is a beautifully tender and buttery traditional Greek New Year's Day cake. You hide a coin or token inside the cake and when it is sliced on New Year's day, whomever receives the coin gets one year of good luck and cutting the cake blesses the house too. And this version is covered in a buttercream frosting in a fireworks pattern to really celebrate the new year! 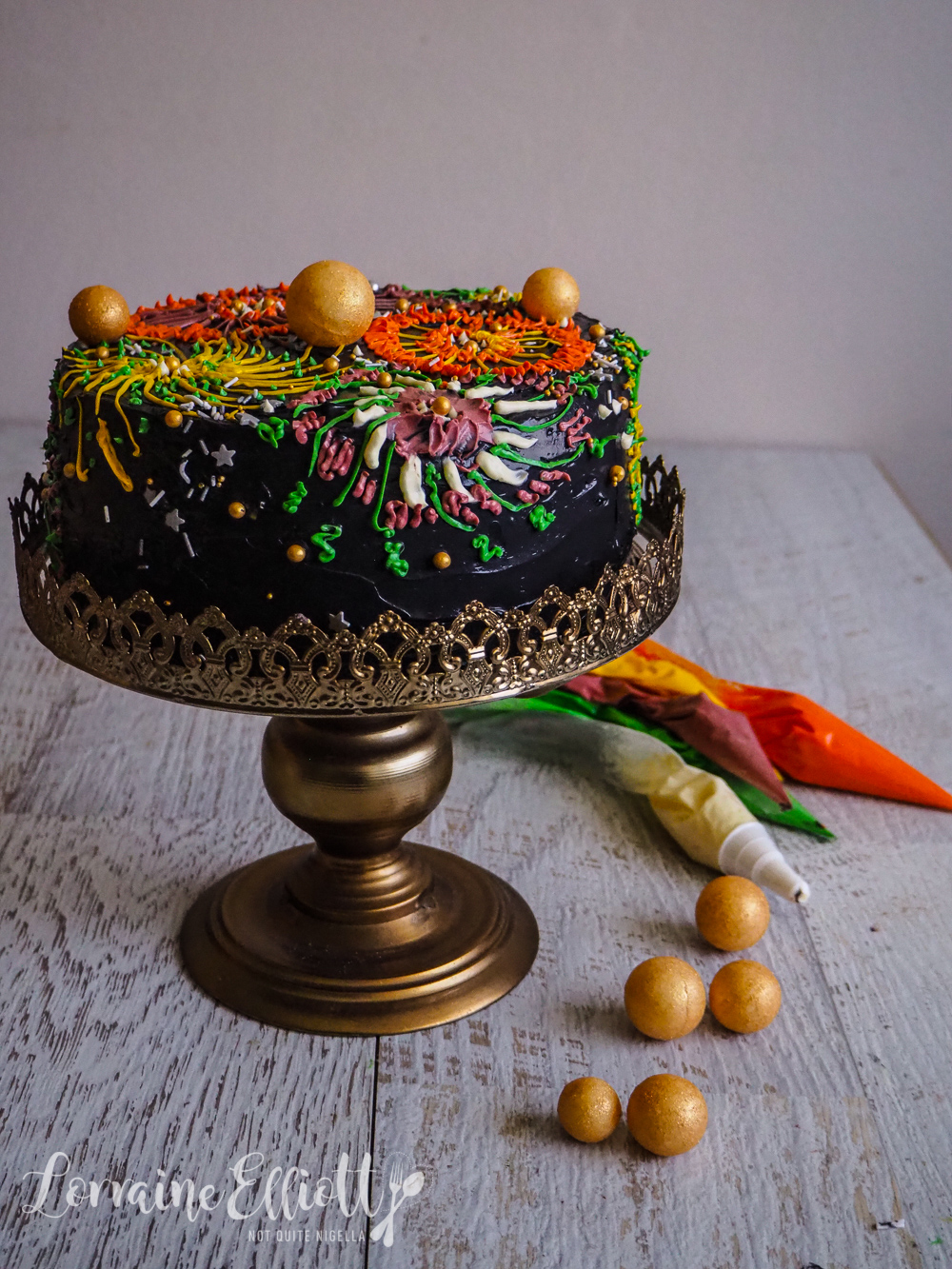 Many associate this cake with the legend of Saint Basil. The story goes that the city of Caesarea was under siege and Saint Basil called for everyone to give what they could to pay the ransom. Gold and jewellery was generously given by the residents but the collective giving spirit embarrassed the enemy who called off the siege. Saint Basil was then tasked with the impossible task of returning the goods to their original owners. So instead all of the jewels were baked into bread or cakes and by a miracle, the jewels were returned to their rightful owners. 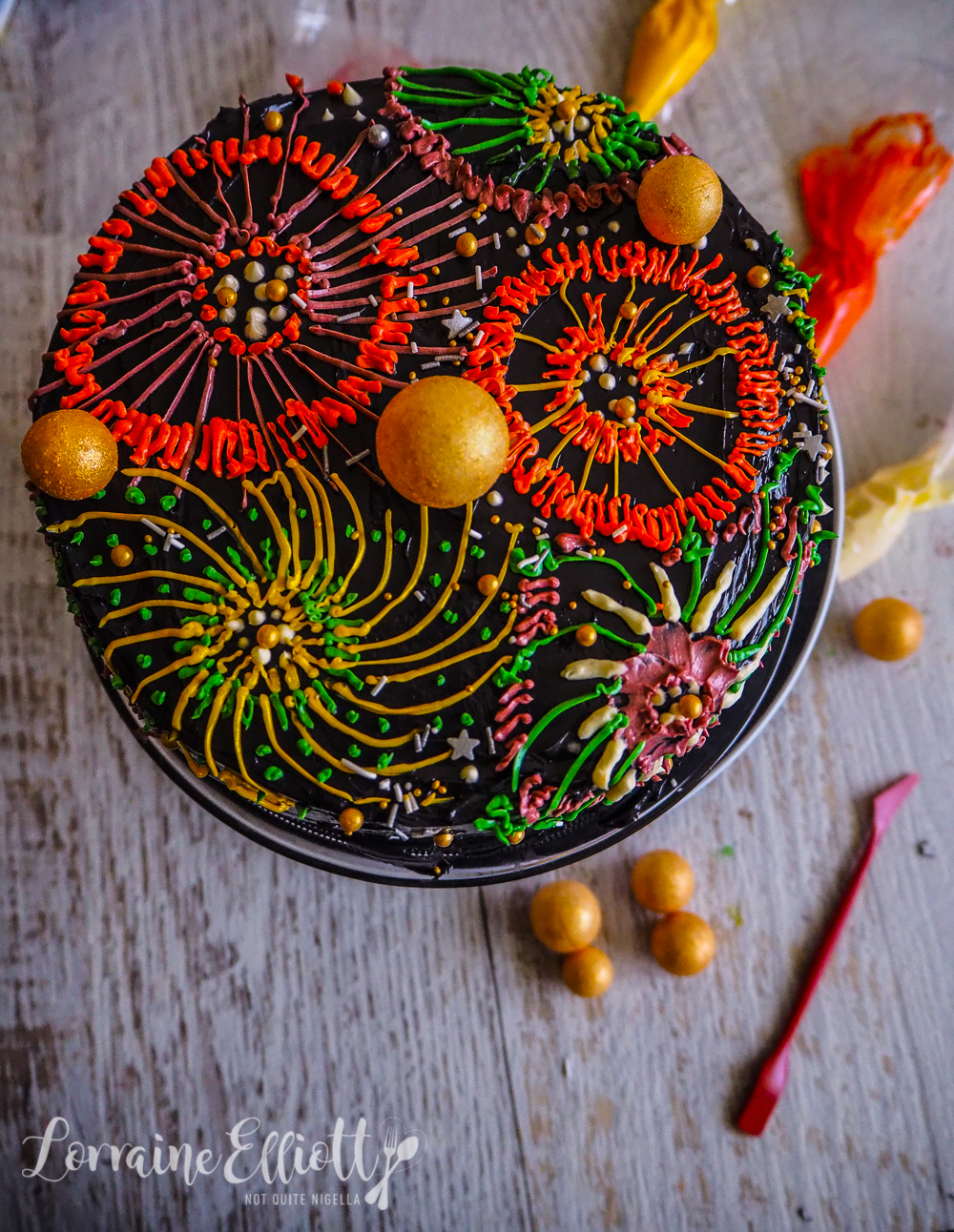 I liked the Vasilopita because it is a simple butter cake with flavours of orange. Another token filled cake is the French cake Galette des Rois but this is a bit more complicated because puff pastry isn't such a simple task to make in warm weather. The Vaselopita cake can be whipped up quickly with mostly pantry ingredients.

In Greece, there is a cake version as well as a bread version. I made the cake version because my father's birthday also falls on New Year's Day so this would be the perfect birthday cake too. A slice is cut for every one present from the eldest to the youngest. 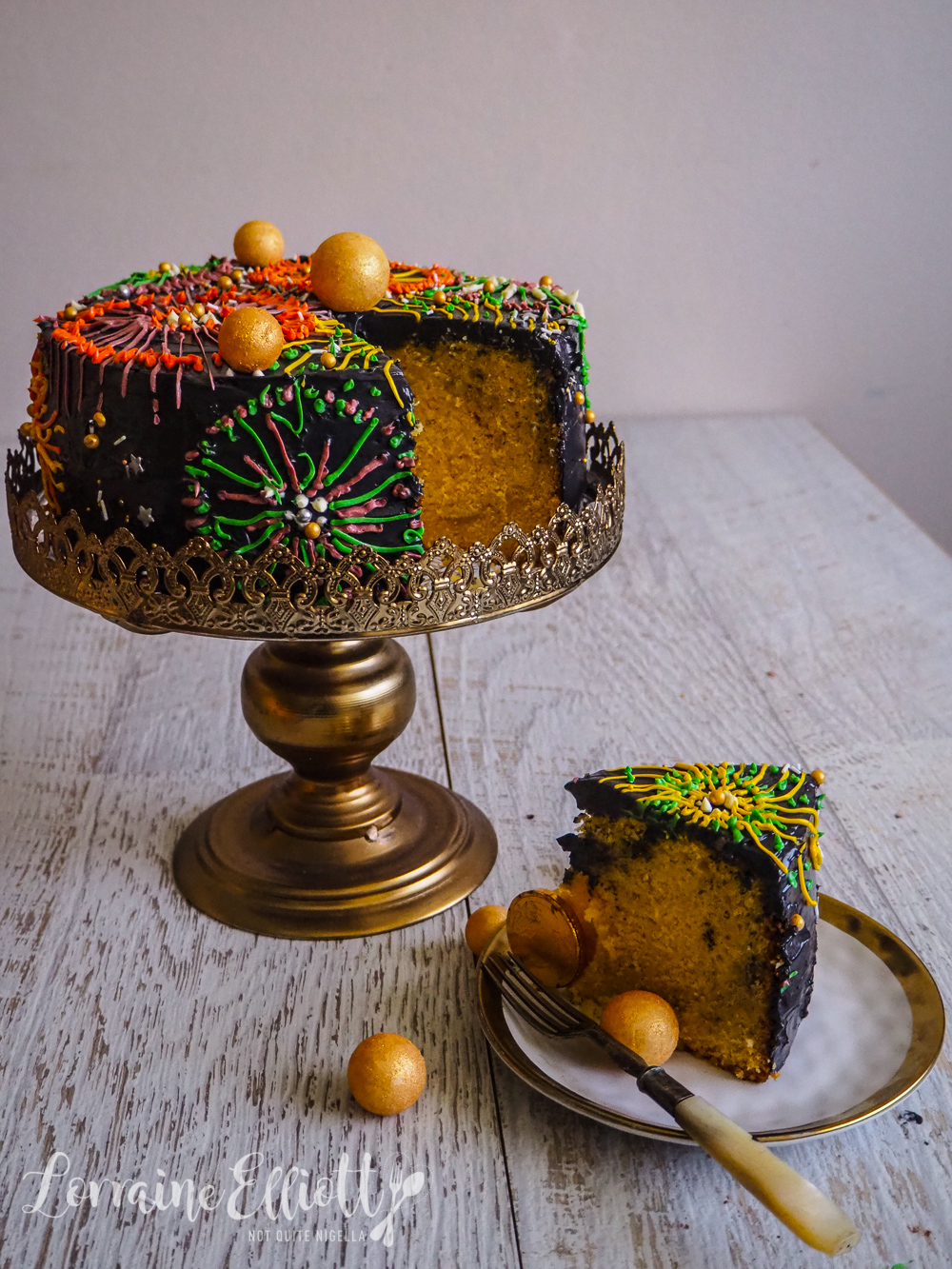 I decided to zhush it up using buttercream fireworks because well you know me right, any excuse to learn a new skill or pattern. But even in its undecorated form it is a truly gorgeous butter cake. Even when cut into two days later it retained its lovely buttery texture. I was generous with the orange zest, vanilla and cinnamon because these flavours are ones that I associate with the holidays and I'm not quite willing to let those go just yet.

Christmas and New Year's is a time for rituals. This past week we had Christmas Eve dinner at our place and then went to the Central Coast for Christmas Day lunch with Mr NQN's Finnish family and friends at his aunt and uncle's house. 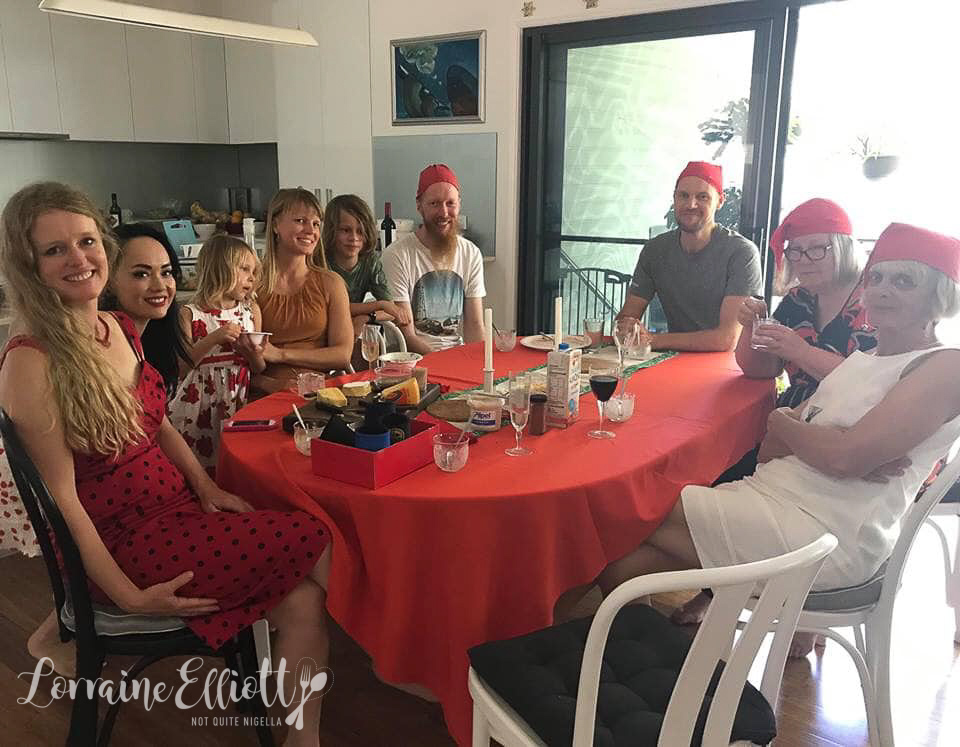 Every year his aunt and uncle serve the same things and I love it because I'm always trying to change things up for Christmas but it's also nice to look forward to ham, prawns, Porkkanalaatiko (Carrot Casserole), Perunalaatikko (potato box) and Lanttulaatikko (swede casserole), Joulutorttu (pinwheel prune pastries) and Sekahadelma Keitto (dried fruit soup) and sweet rice porridge (Riisipuuro). 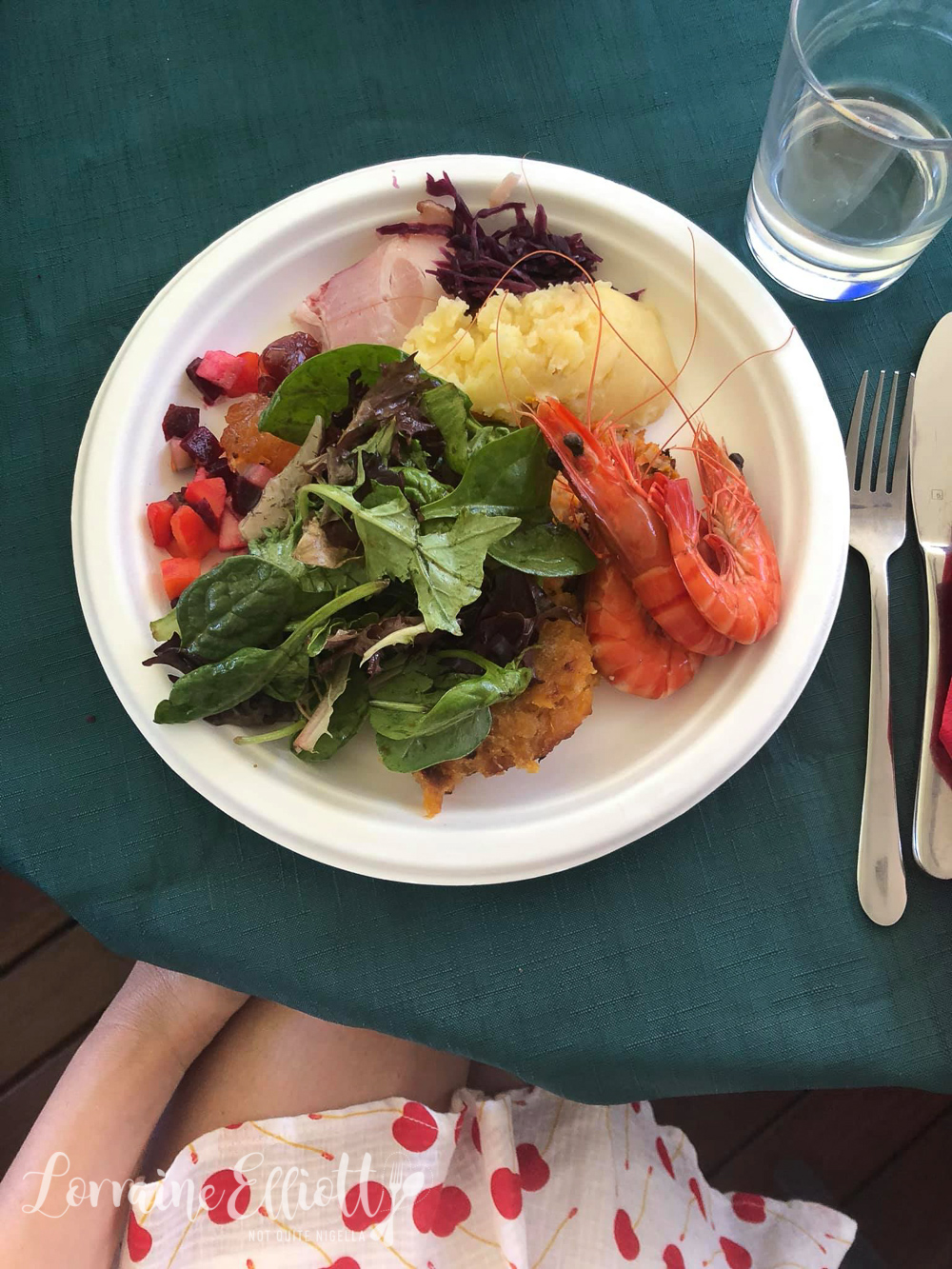 Time really flies while when we are there-suddenly it's 3pm and almost time to head back to the city. But while everyone was eating the dessert, Mr NQN's cousin Liisa suddenly turned up the music on a song called Lasten Joululaulut and all the Finns in the room started singing and dancing in unison. It was as if it were a Finnish flash mob. 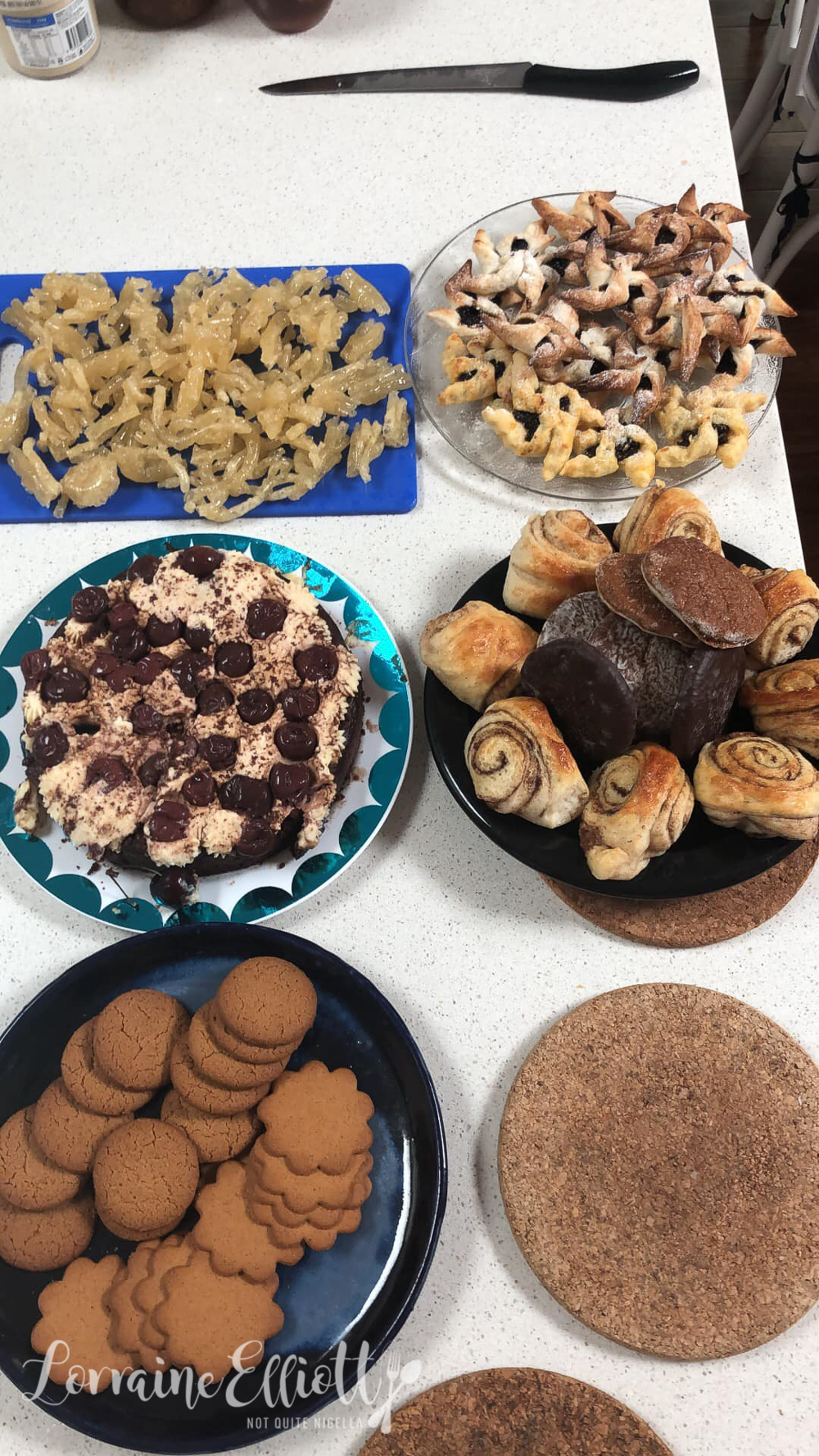 The non Finns among us looked around us in wondernment. They lined up and started doing a dance-it's a story about elves and how they sneak into a house while everyone is asleep and the chorus goes, "Tip Tap Tip Tap". 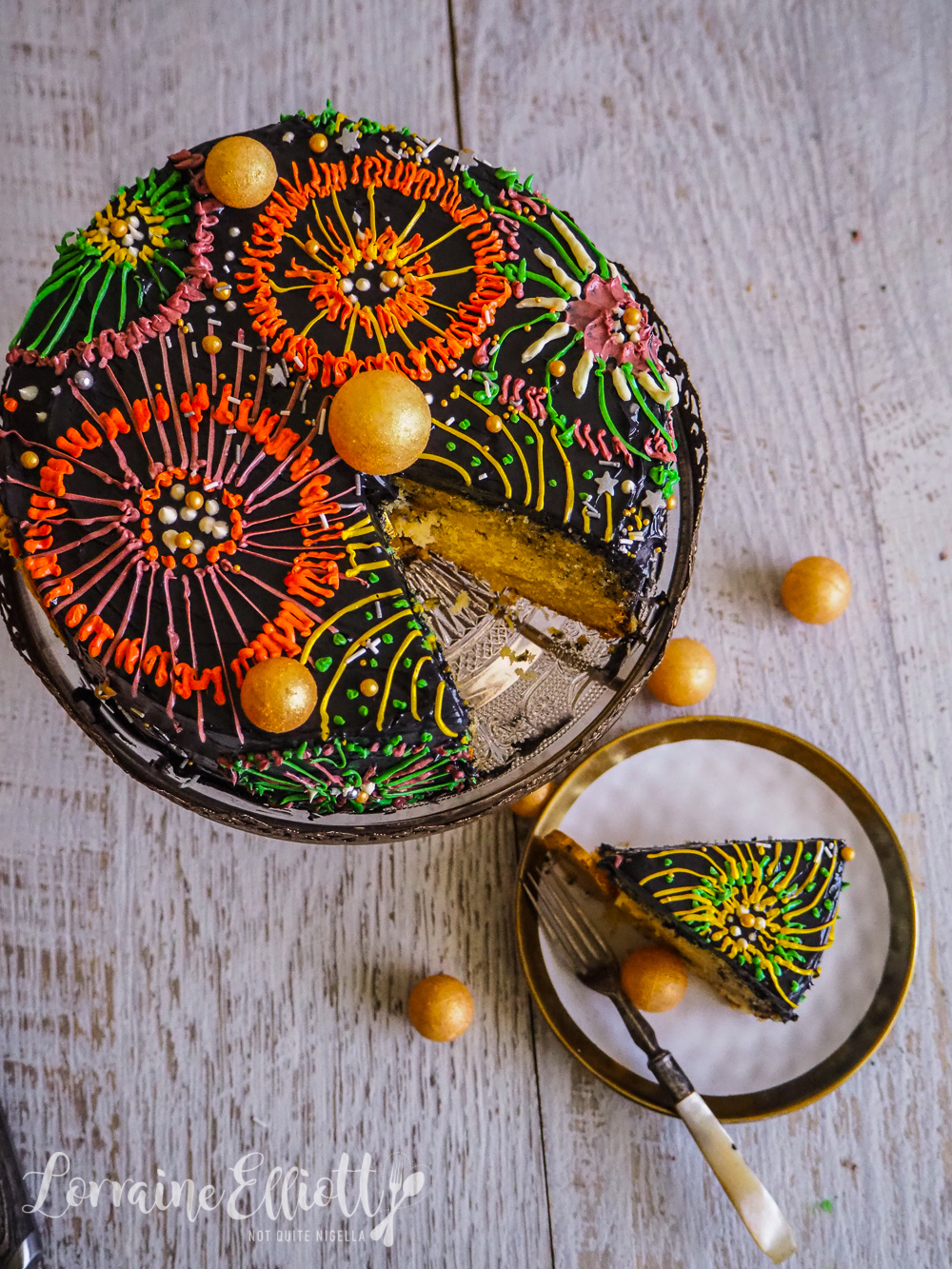 It is very cute especially when everyone does it in unison along with the actions. If you'd like to have a little look I put some videos of it up on my Instagram stories under the Christmas highlights. It's adorable. And while I love the new and doing things a bit differently, a part of me also adores traditions like these! 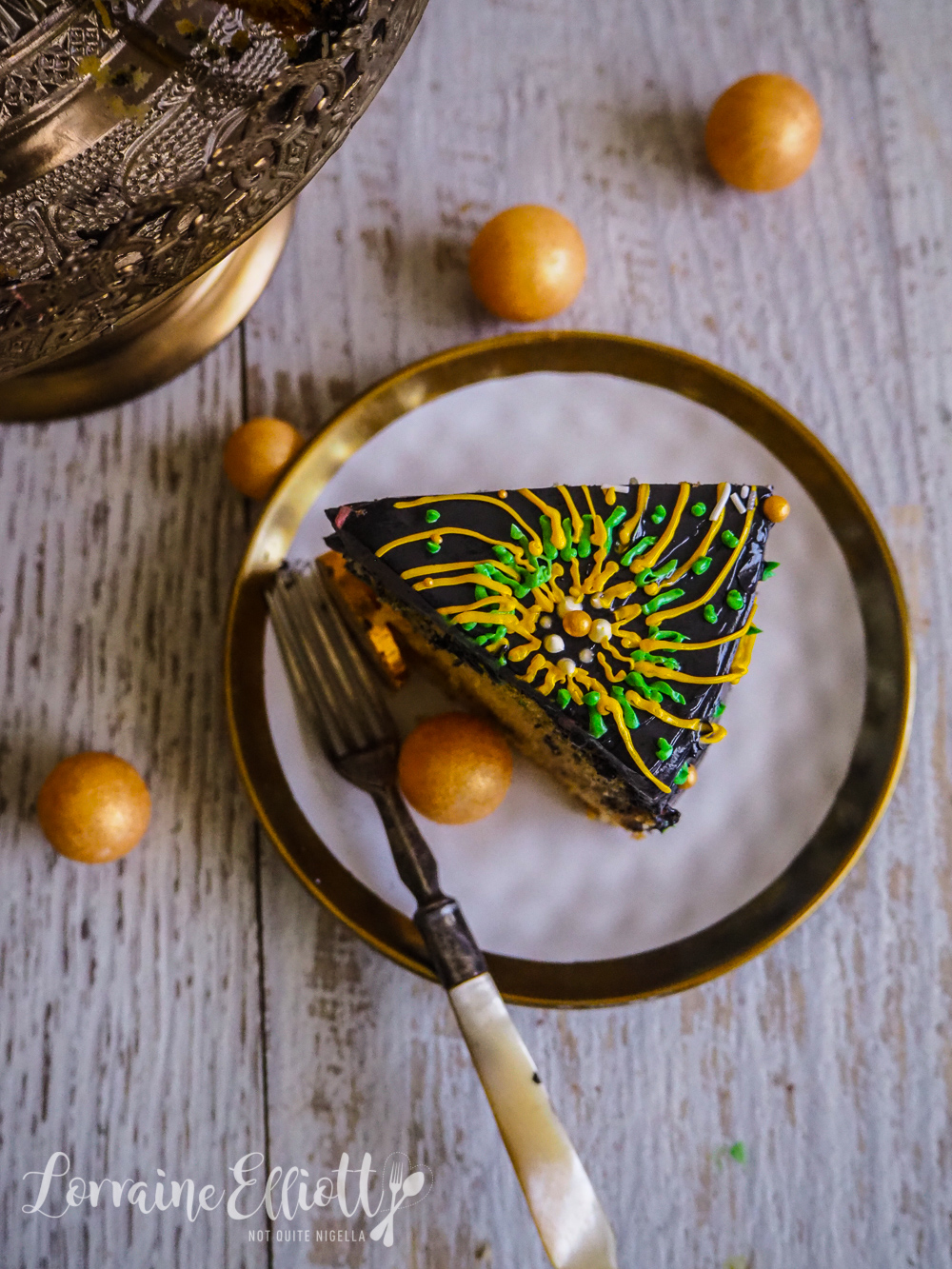 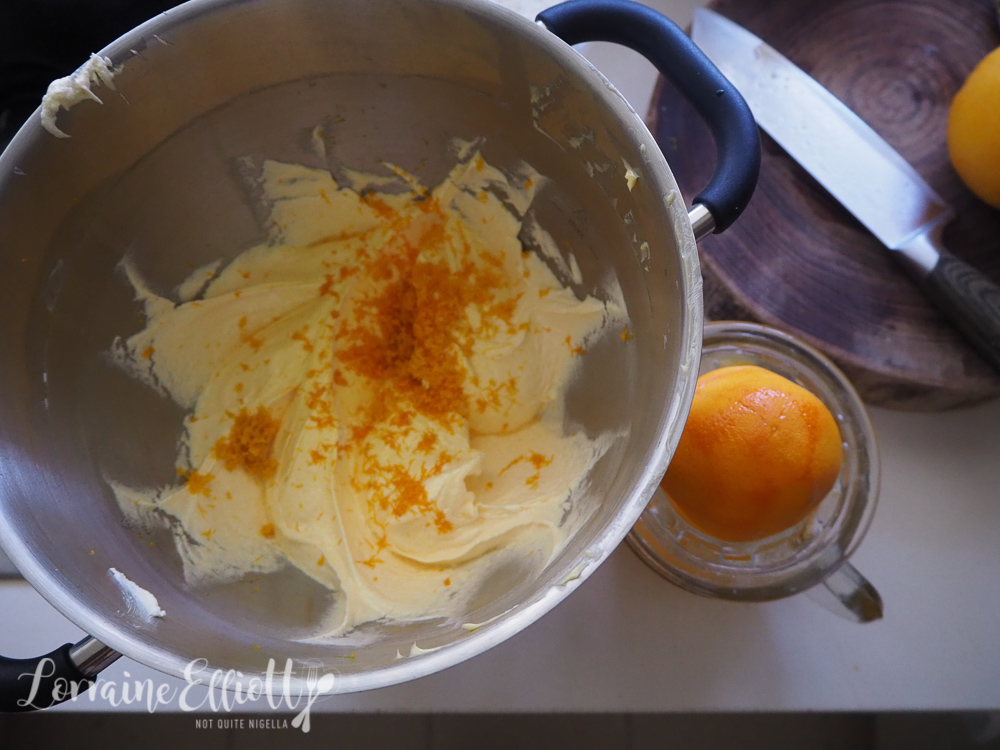 Step 1 - Preheat oven to 160C/320F and line the base and sides of a 20cm/8inch cake tin. Beat the butter and sugar until white and fluffy-about 5 minutes or so. Then add eggs one at a time beating well between additions. 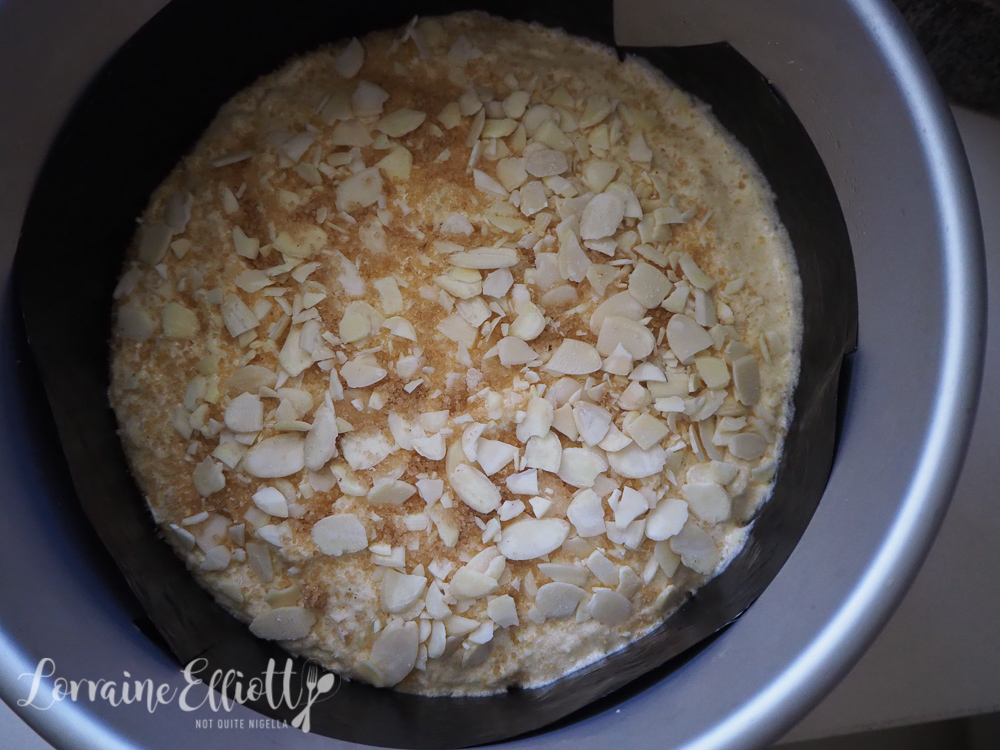 Step 2 - On the lowest speed add in the flour, baking powder, orange zest, juice, vanilla and cinnamon and beat until just combined (do not overbeat). Spoon half of this batter into the prepared tin and cover with almonds and sugar. Then spoon the remaining half into the tin. Bake for 80 minutes or until the centre springs back when touched. Cool completely. Then slide a chocolate coin into the cake. 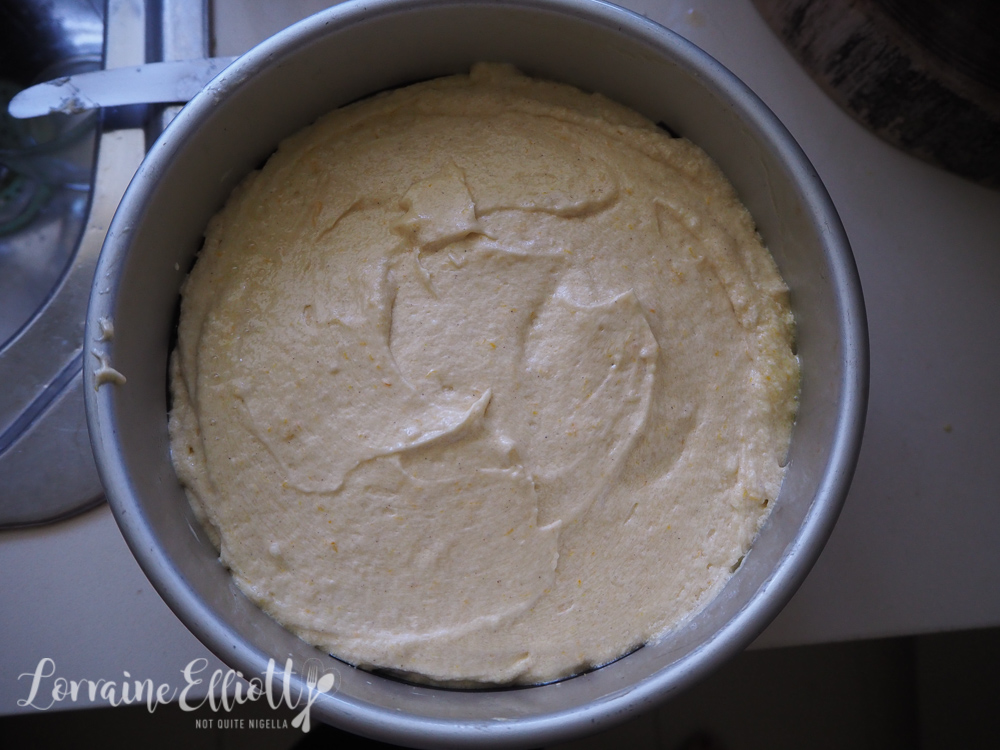 Step 3 - To make the buttercream, beat the butter on low to medium speed until white in colour - about 4-5 minutes. Then add the sugar and water and beat on same speed for another 5-8 minutes or until the icing is smooth and you can feel any sugar between your fingers. 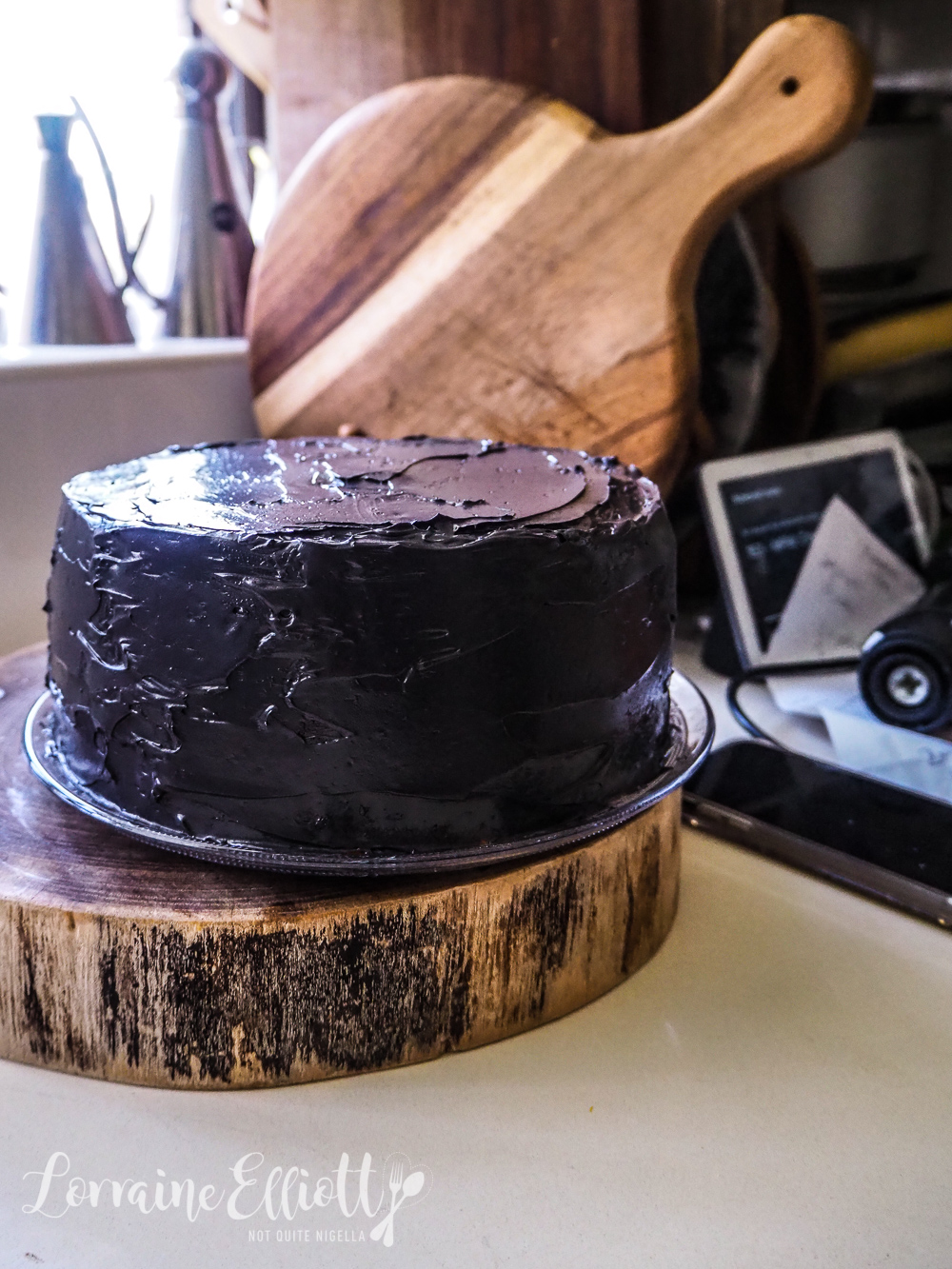 Step 4 - Place two tablespoons of the white buttercream in five bowls and tint them orange, yellow, blue, red or pink and leave one white. With the remaining buttercream beat this with the charcoal until you get a black buttercream. Spread this all over the cake on the top and sides. If you have time you can place this in the fridge to harden as it will make piping the fireworks easier. 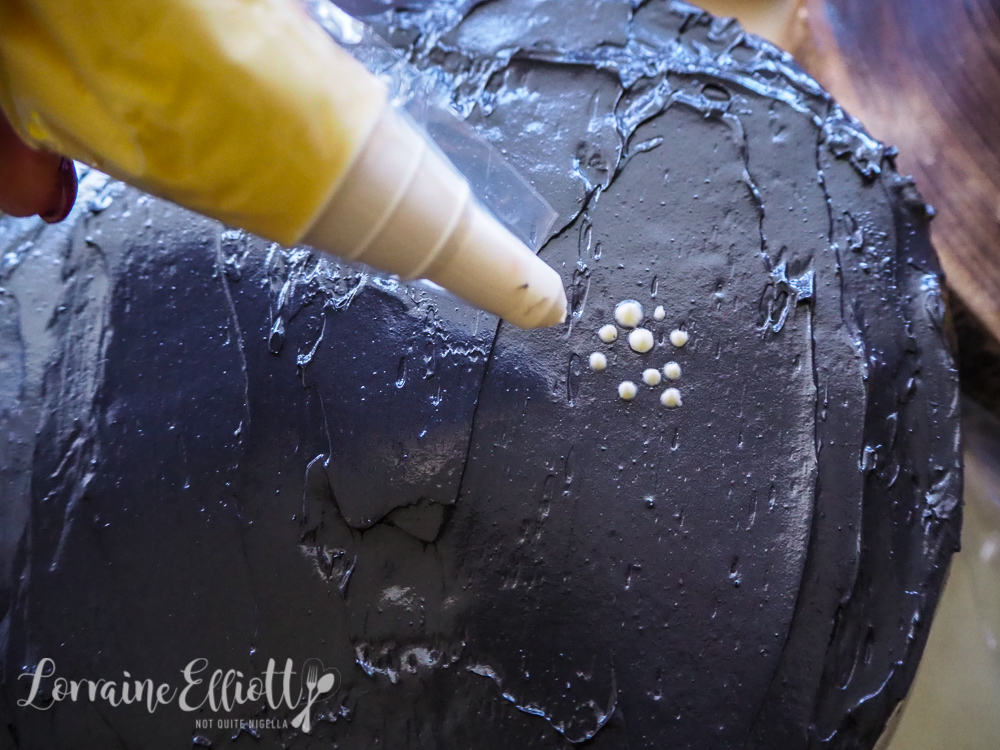 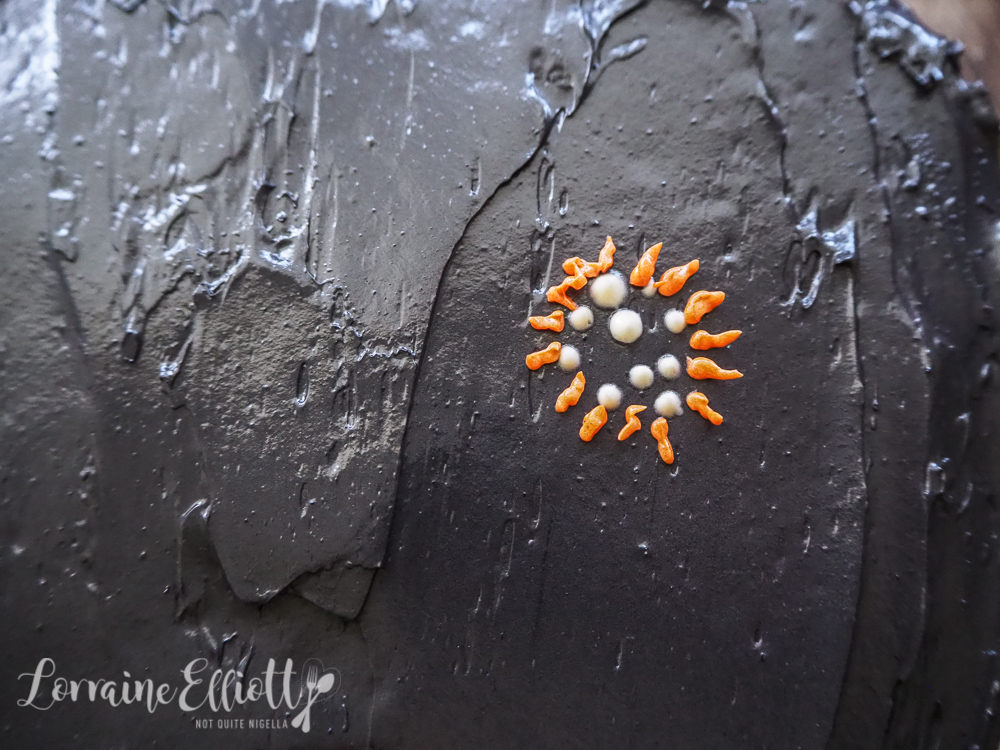 And then build layers for the fireworks 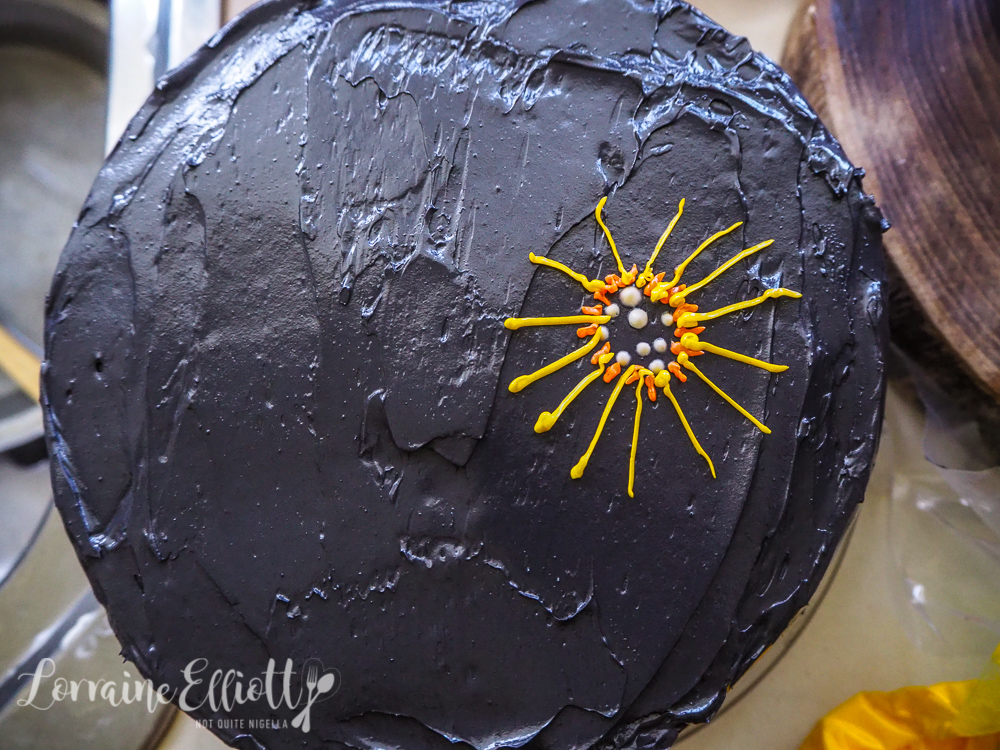 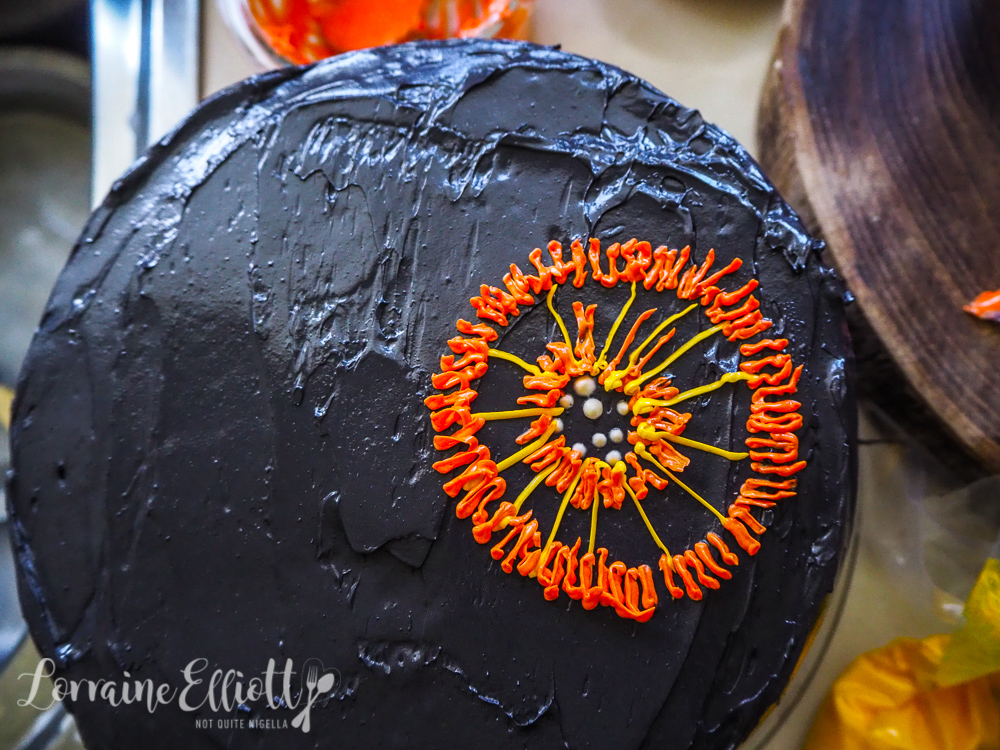 Step 5 - Place in small piping bags fitted with plain tips. I only had one tiny plain tip so I didn't add a tip. Start with white at the centre and pipe five small dots. Then branch out to create the fireworks using different colour combinations. It is easier to do this on a tilted cake turntable so that you can draw the patterns on the sides. Sprinkle with gold balls and sparkly sprinkles. 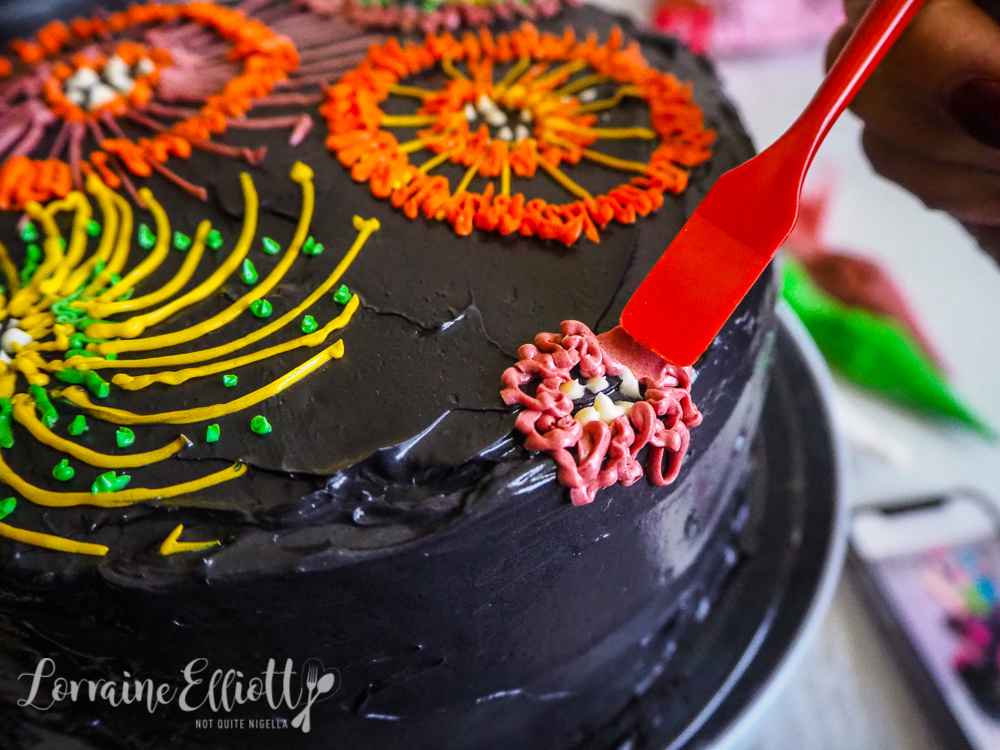 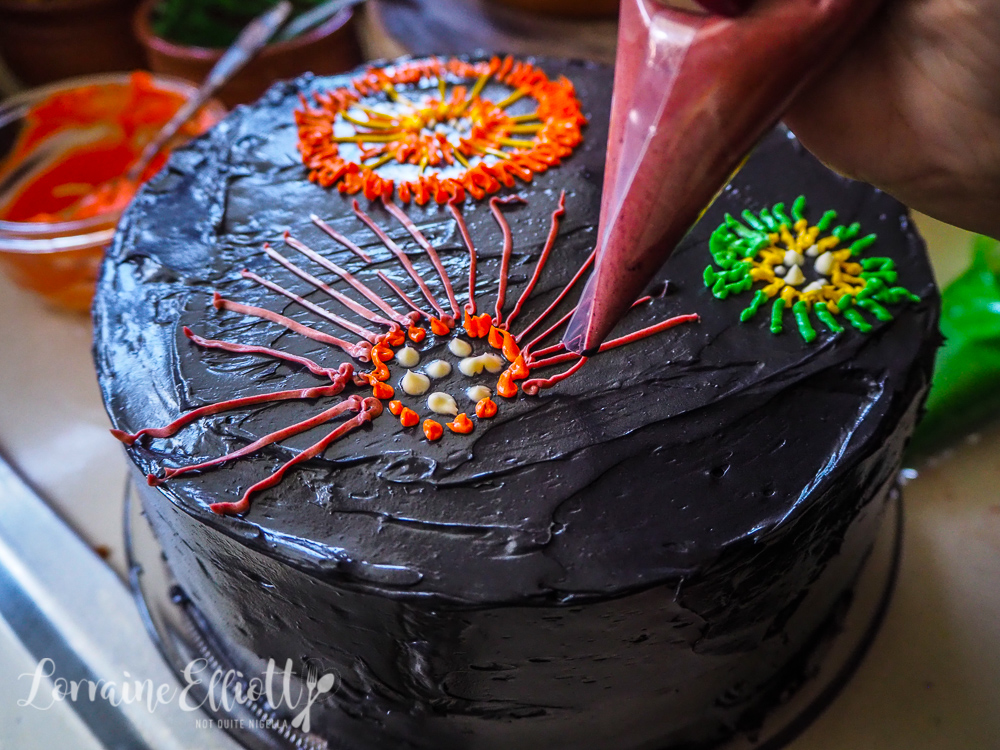 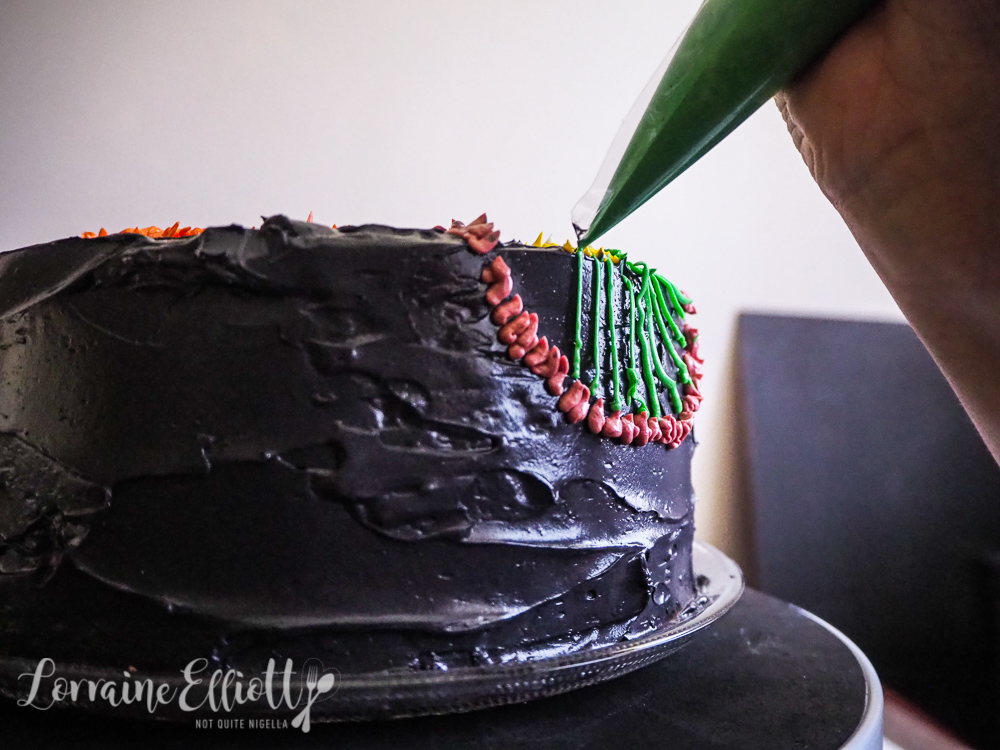 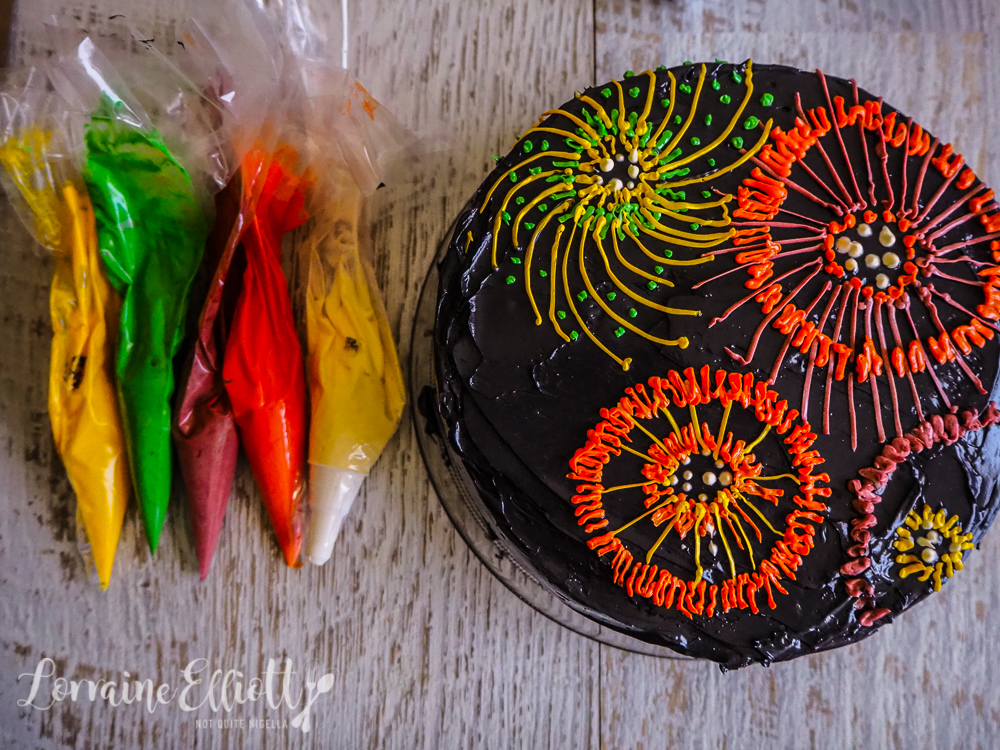 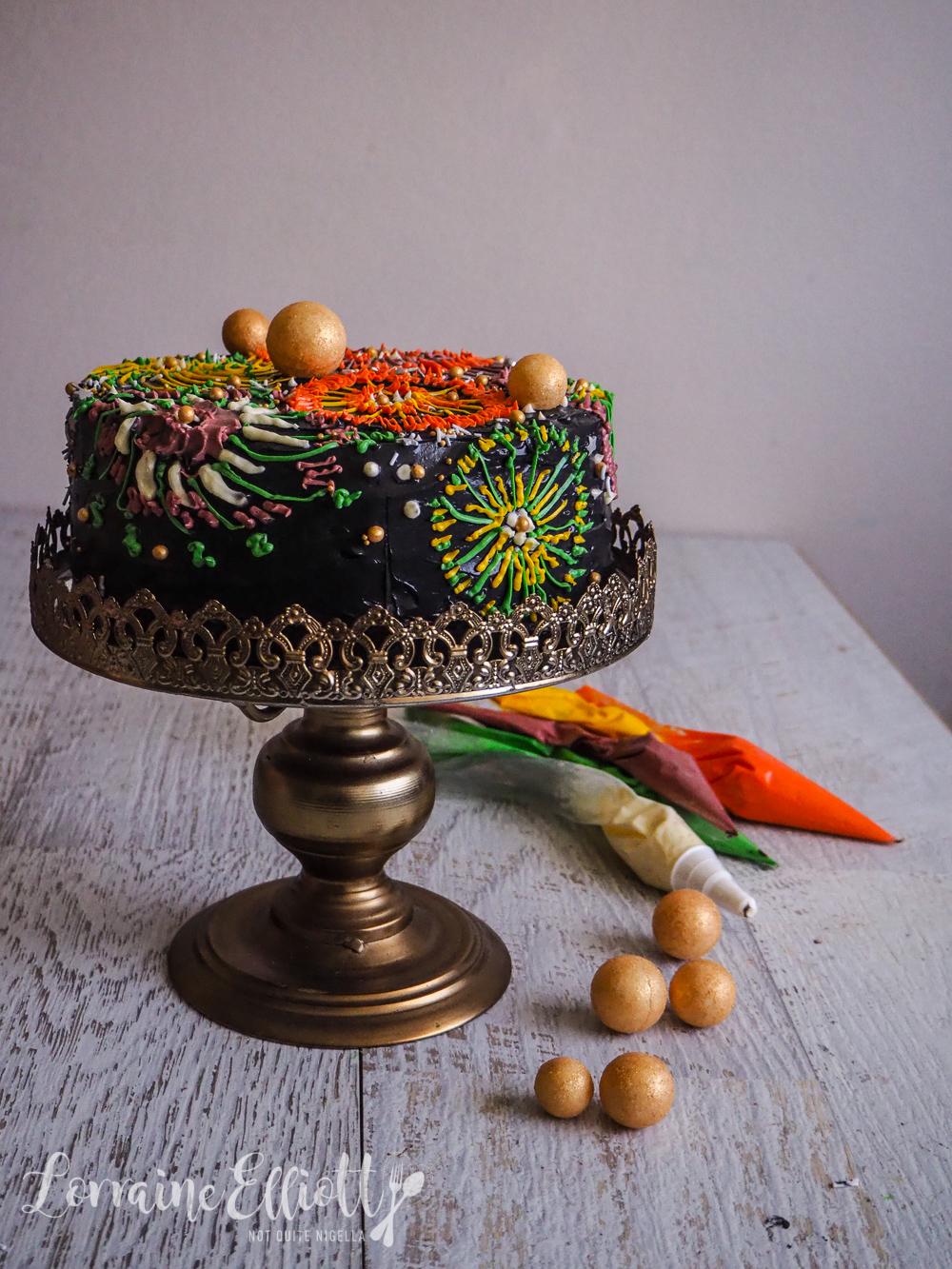