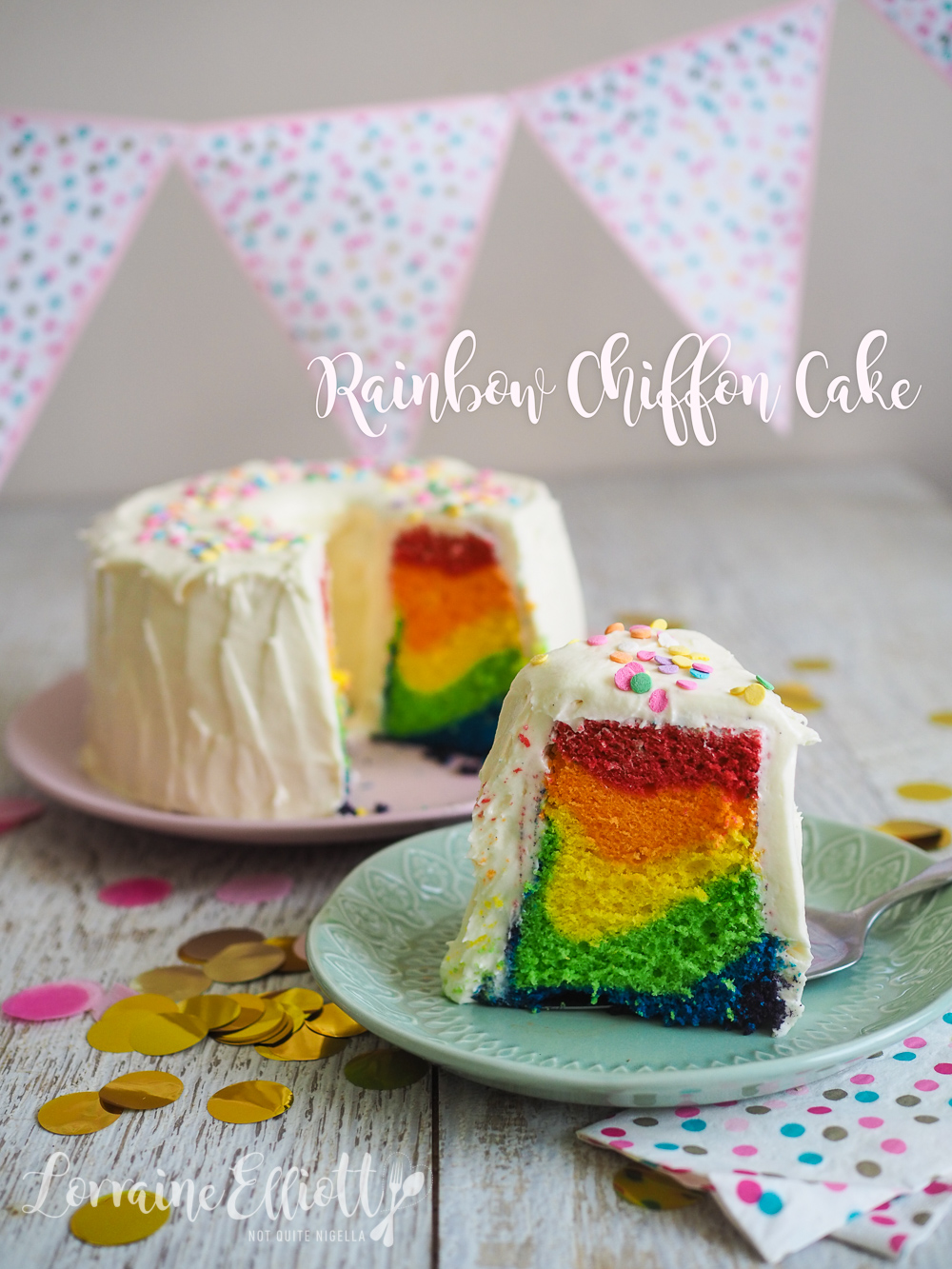 This rainbow chiffon cake is perfect for Mardi Gras! With all six colours of the rainbow, this cake is ethereally light and yet still moist inside too. Covered with a rich vanilla buttercream and decorated with edible confetti this cake is pure joy! I called her Miss Reign Beau!

What is a chiffon cake? Chiffon cake is a very light cake that has a very fine crumb. Chiffon cake can be served with or without frosting. The light and airy texture is a result of whipped egg whites rather than using baking powder as a leavening agent (although baking powder can also be used). 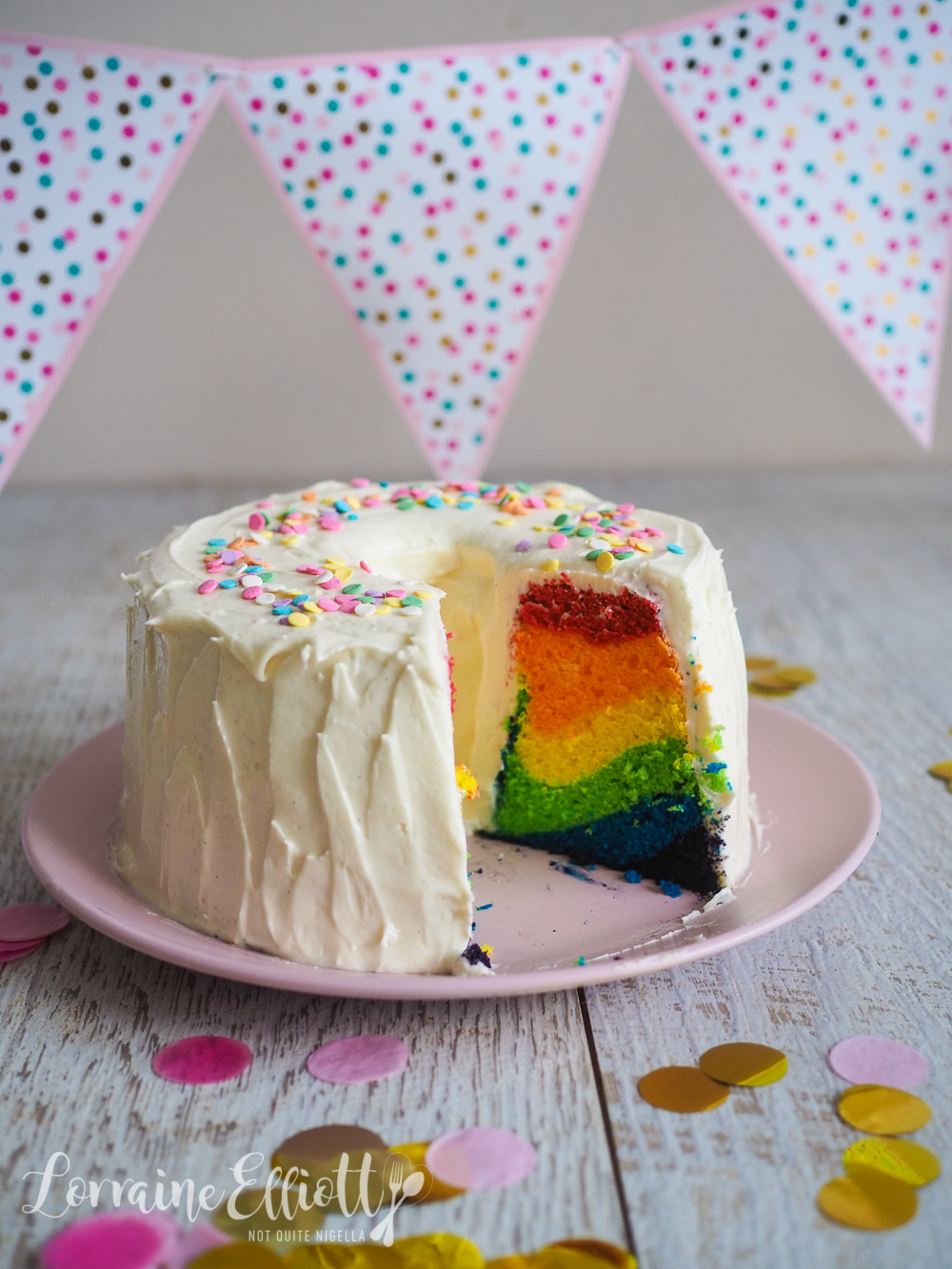 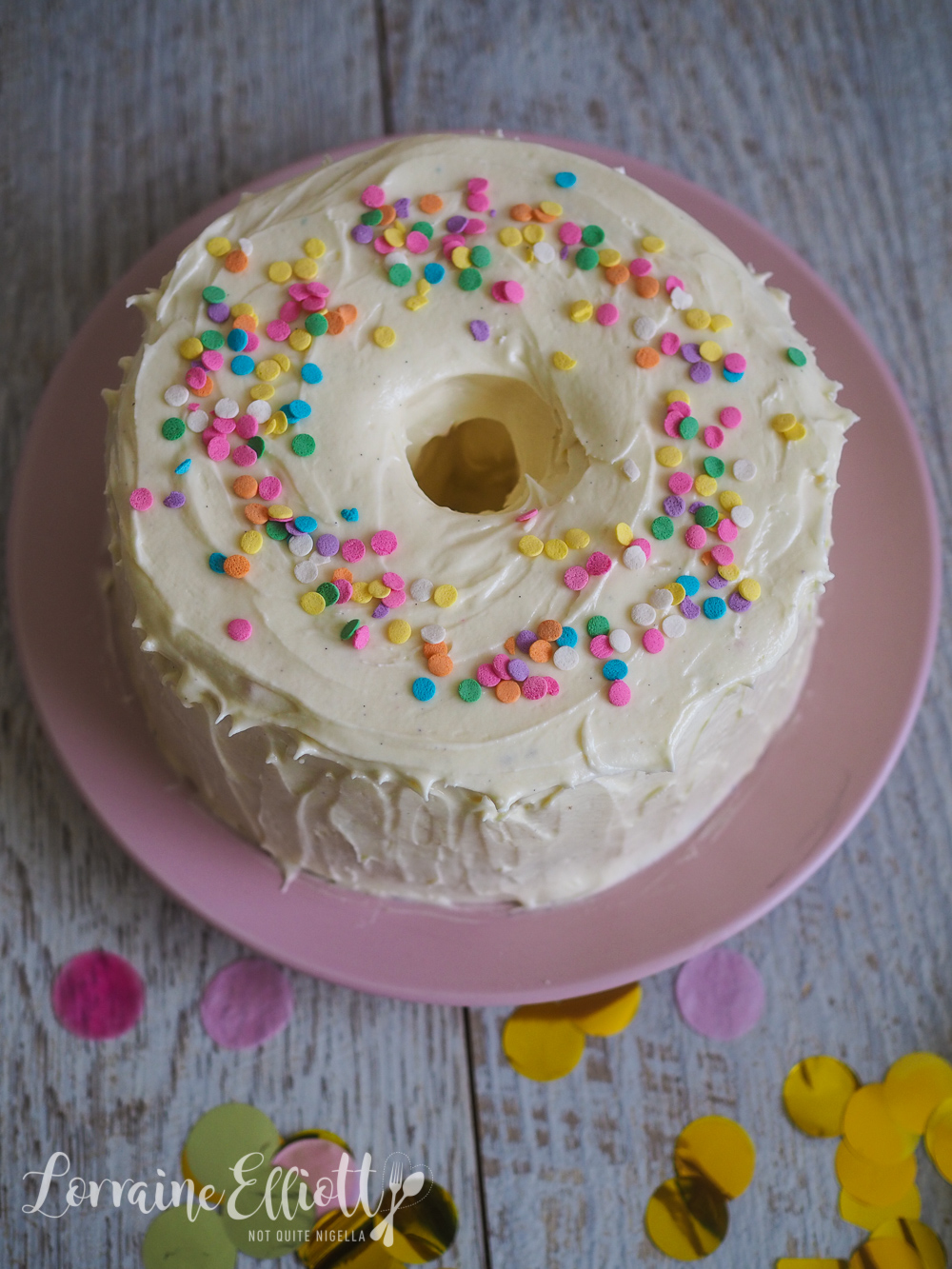 The unique texture of chiffon cakes: Chiffon cake is an example of a foam cake. The oil in the cake keeps it moist and helps the texture remains soft because oil is liquid at room temperature. This cake can be kept at room temperature as it is coated in buttercream and lasts in a covered container for 3-4 days while still remaining moist and fresh. 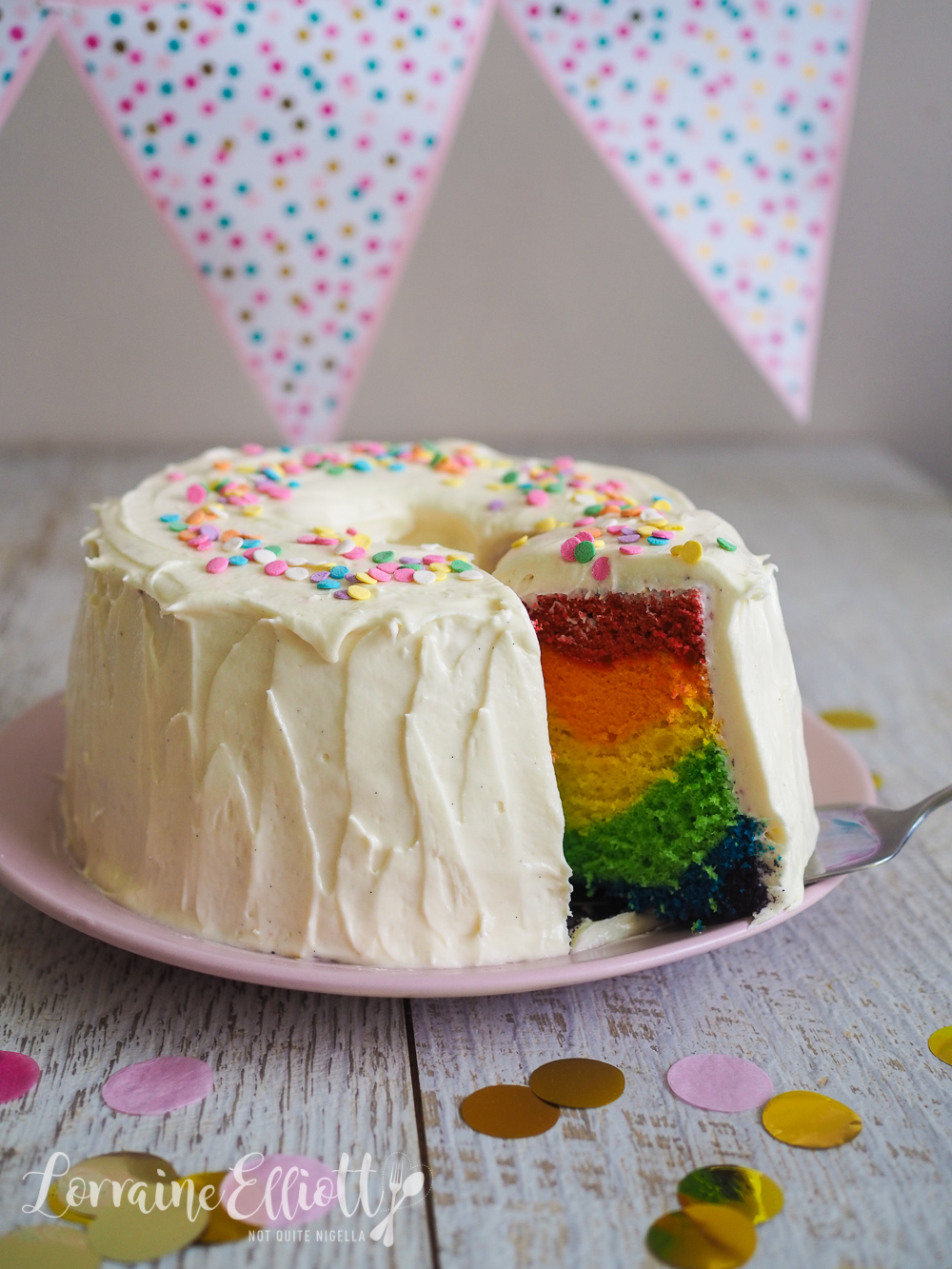 The cake tin is one of the most important parts of a chiffon cake and I would not recommend making one unless you have the correct tin. You will need a non non-stick tube tin. I bought mine from ebay many years ago. The chiffon cake tin also has little legs that help you cool the cake upside down so that the cake stays risen and doesn't sink down in the tin. The lack of non stick coating allows the cake to cling to the sides to rise up and prevents it from sinking down. 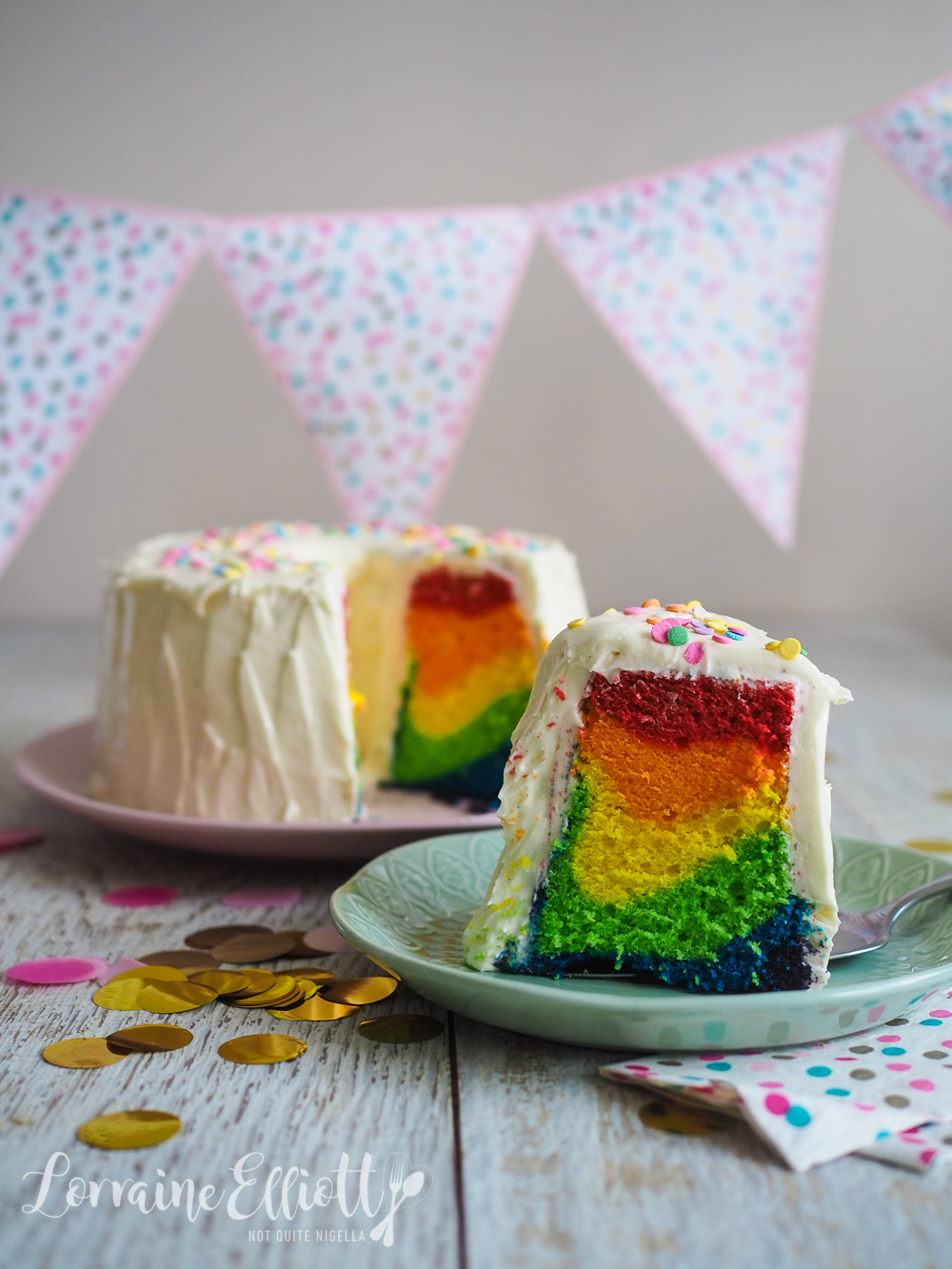 This weekend is the Mardi Gras parade, a very important event in the LGBTQIA+ community and in Sydney in general and it always coincides with our wedding anniversary (we got married on Mardi Gras weekend many years ago). I often want to bake something for Mardi Gras but I often forget, my mind buried in activities and the January - March daze. Sometimes we even forget our anniversary until it's almost too late!

This year I remembered both the anniversary and Mardi Gras so I celebrated the best way I know, with cake! The rainbow detail is a little fiddly but when it's as important as Mardi Gras then it's just a bit of extra washing up with the bowls.

It has been a few years since I went to the parade and I wish we could come along to this year's especially since Laura is going to be part of the parade. Happy Mardi Gras weekend and have a glamorous time darlings!

So tell me Dear Reader, are you going to the Mardi Gras parade or celebrating? Have you ever baked a chiffon cake? 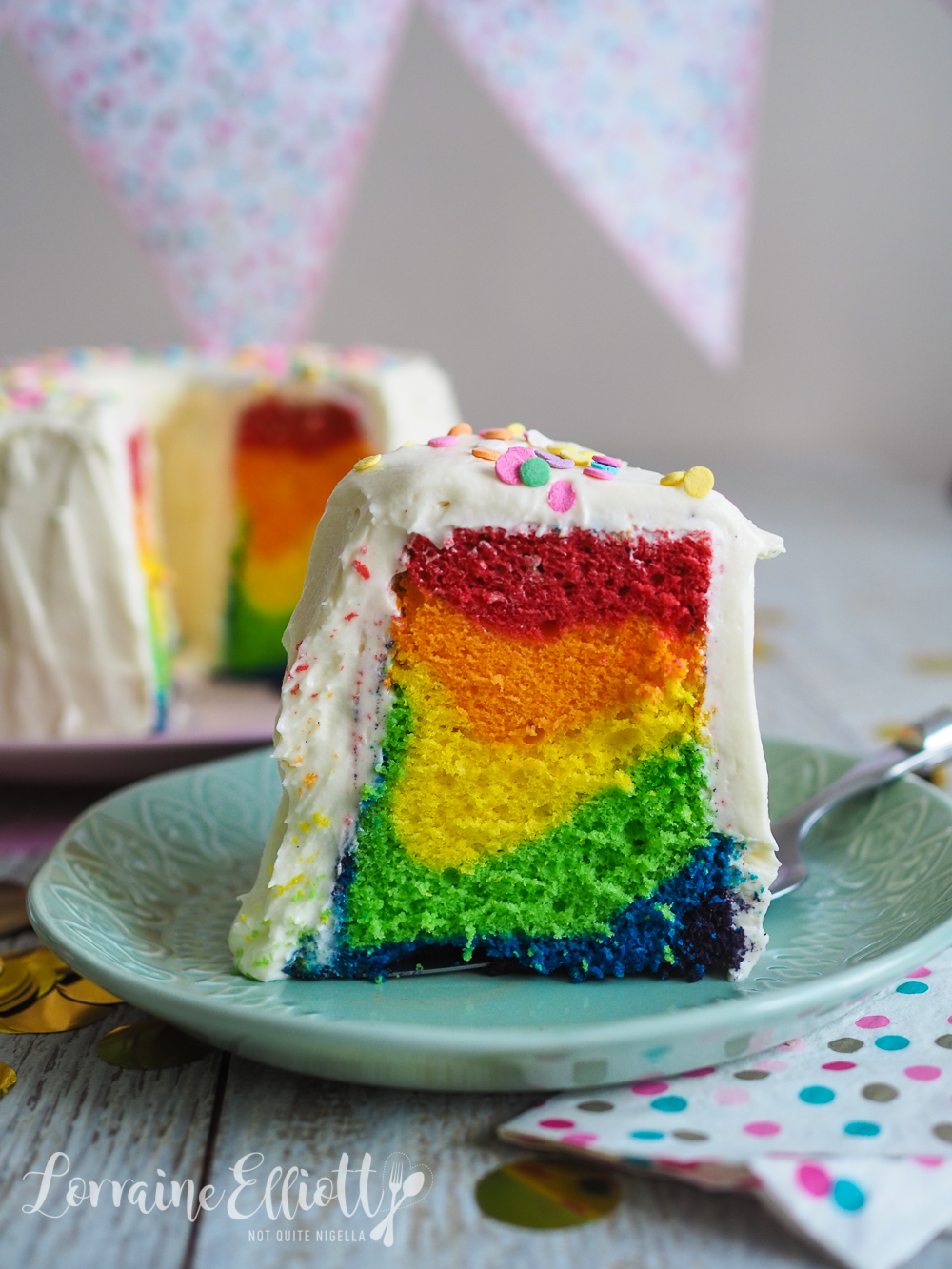 Step 1 - Preheat oven to 170C/340F and have a 21cm/8.2inch chiffon cake tin ready (must not be a non stick tin). Also it's important that the whisk and bowl are very clean and have no traces of fat on them. Also have six bowls, spatulas and spoons. Because you want to divide the mixture into six portions to colour them, weigh your mixing bowl and separate bowls. 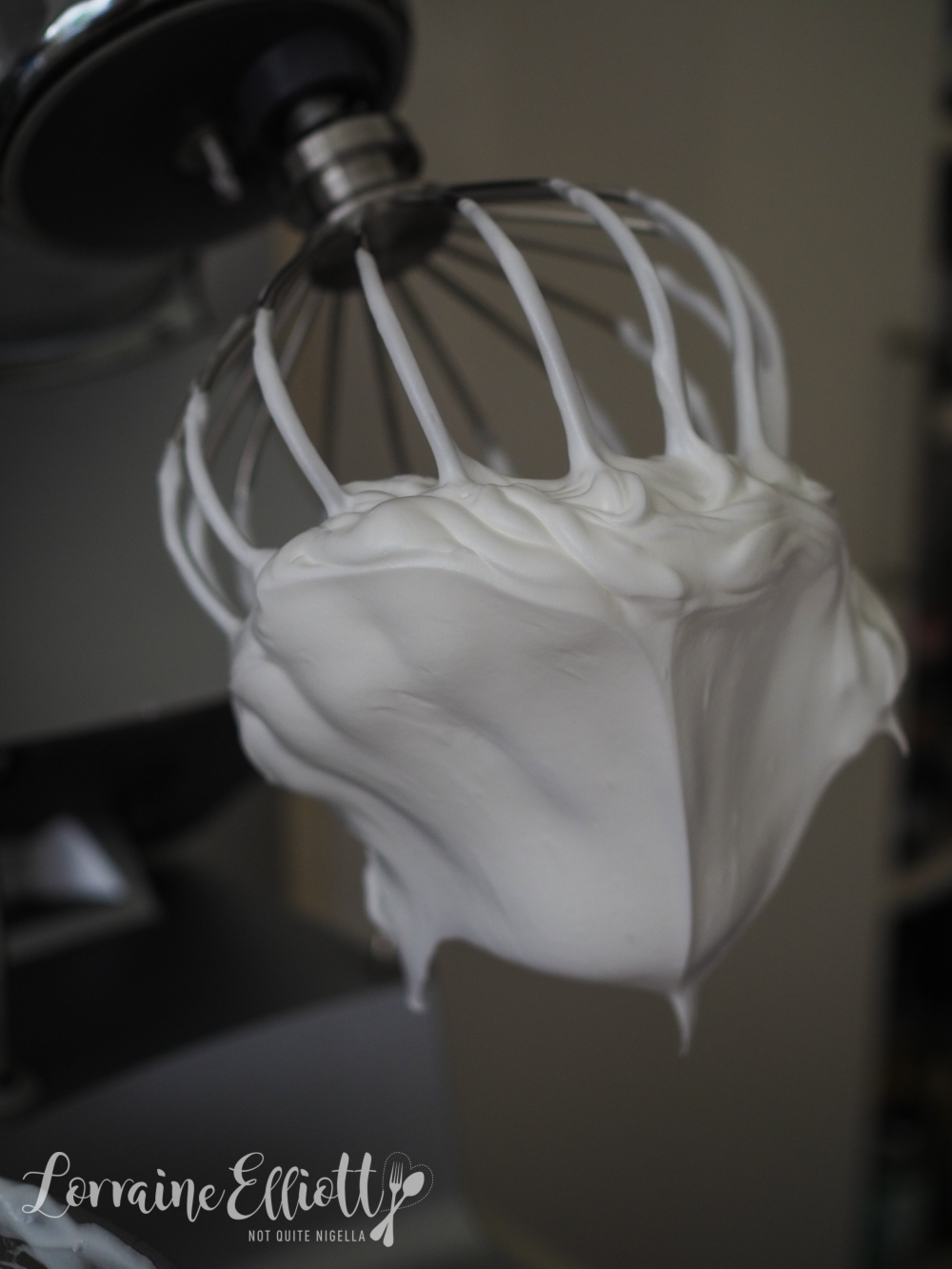 Step 2 - Whisk the egg whites and cream of tartar until you get soft peaks. Add the first lot of sugar in a stream and whisk until firm peaks form and you can tip the bowl upside down without the meringue moving. Scoop the meringue out and set aside in another bowl (at this point, it's useful to weigh the total weight of the meringue mixture because you'll divide it into six portions). Using the same bowl (mainly because I hate washing up) whisk the egg yolks, tea and second lot of sugar for 3 minutes. Add the oil and milk and whisk until combined. Sift in the already sifted cake flour in in four lots and fold gently until smooth and there are no lumps. 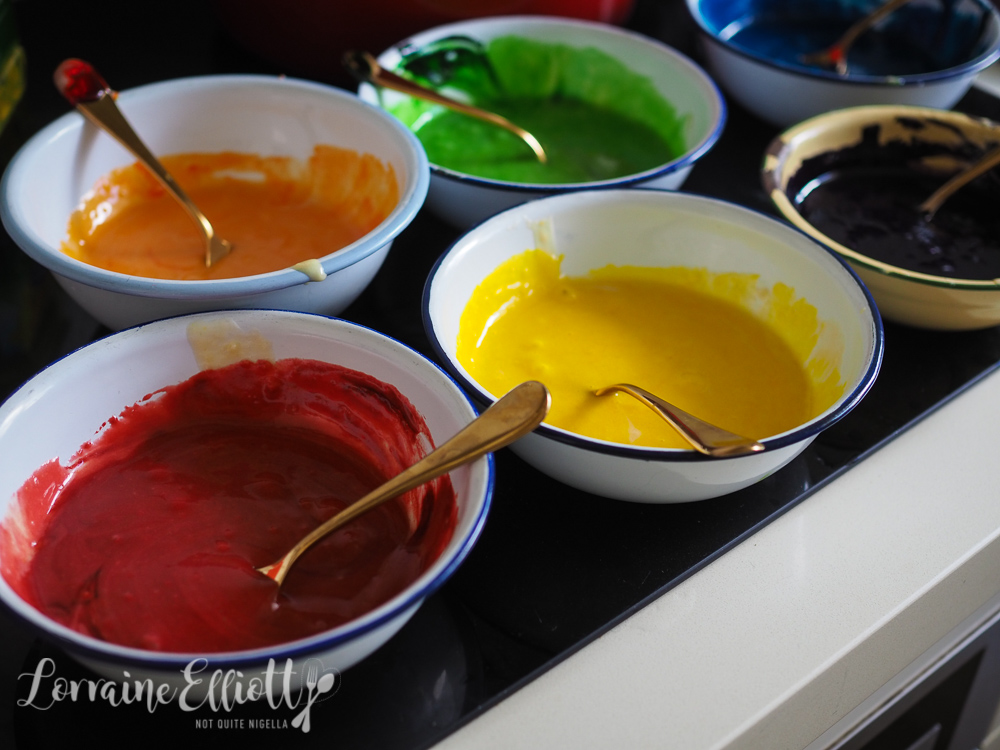 Step 3 - Preheat oven to 160C/320F. Divide the yolk and flour mixture into six bowls evenly (I weigh the total mixture and then divide and weigh). Colour with gels. The divide the meringue into six lots into each bowl. Make sure to gently fold the mixture in trying not to deflate the mixture. Make sure that the egg whites are incorporated well and there are no streaks. 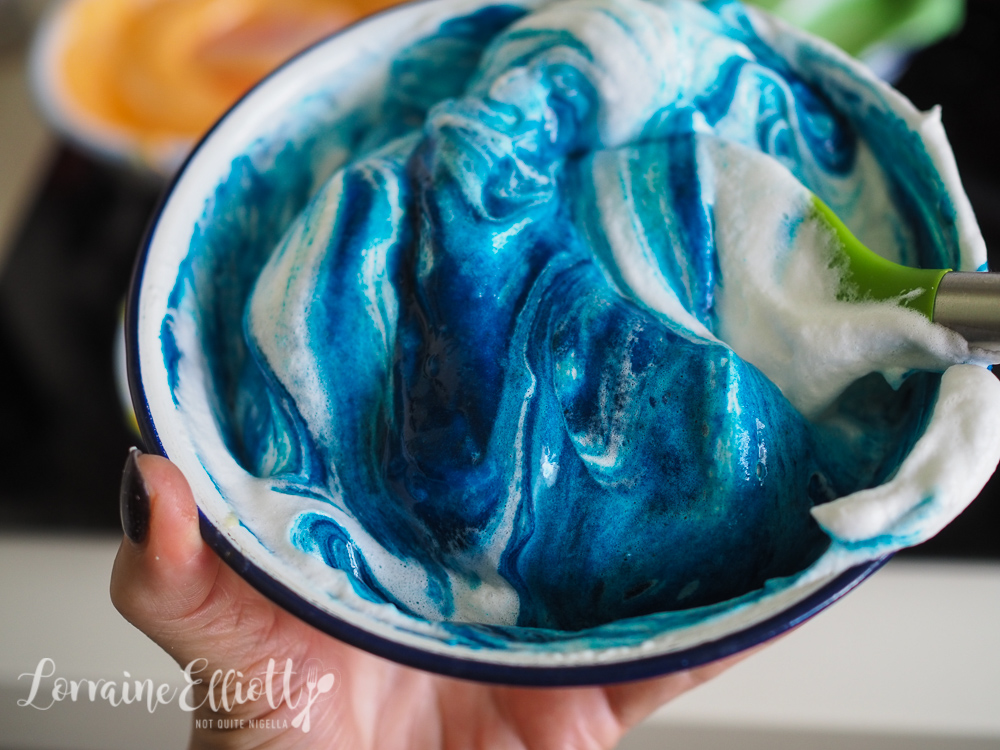 Mixing in the meringue 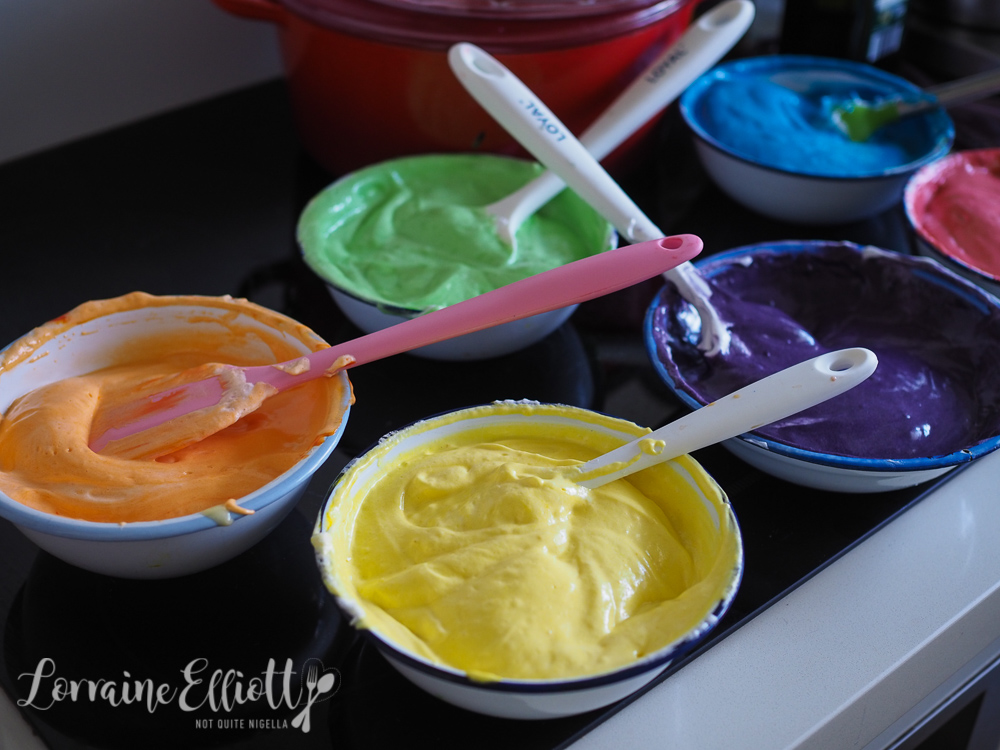 Until uniform in colour

Step 4 - Spoon into the tin and start with red then orange, yellow, green, blue and finish with indigo leaving 2cm or 3/4 an inch space from the top. Smooth over with an angled spatula between each layer. Then bake for 50 minutes or until the top springs back when touched. 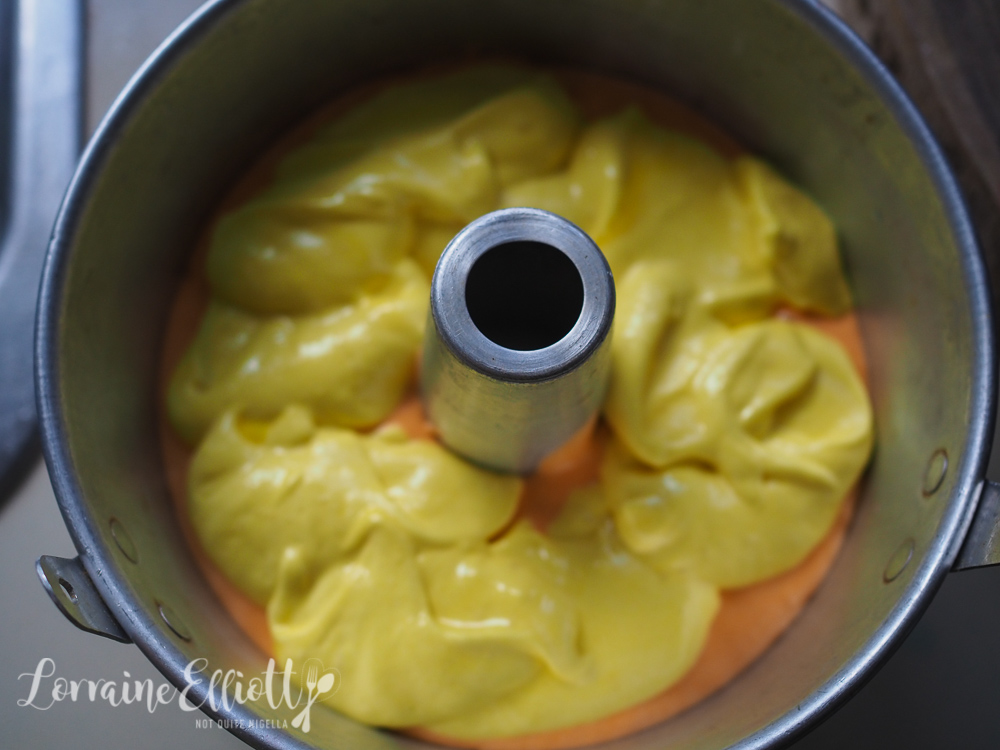 Spoon each batter into the tin 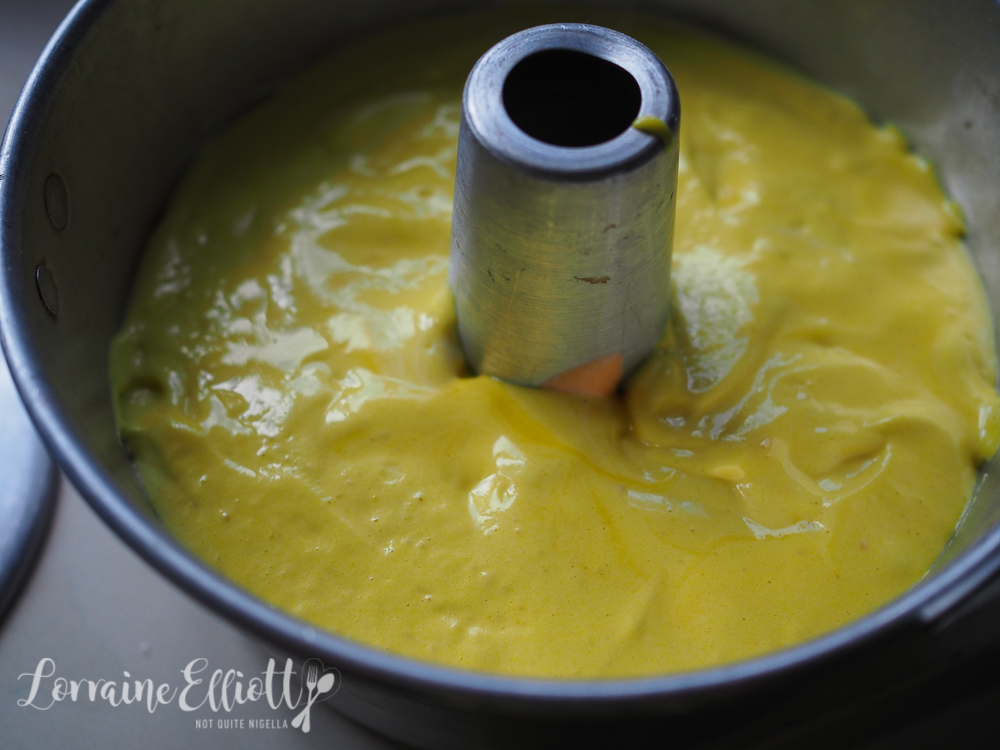 Then smooth over with an angled spatula

Step 5 - As soon as the cake comes out of the oven, immediately turn it over onto a plate and allow to cool upside down. 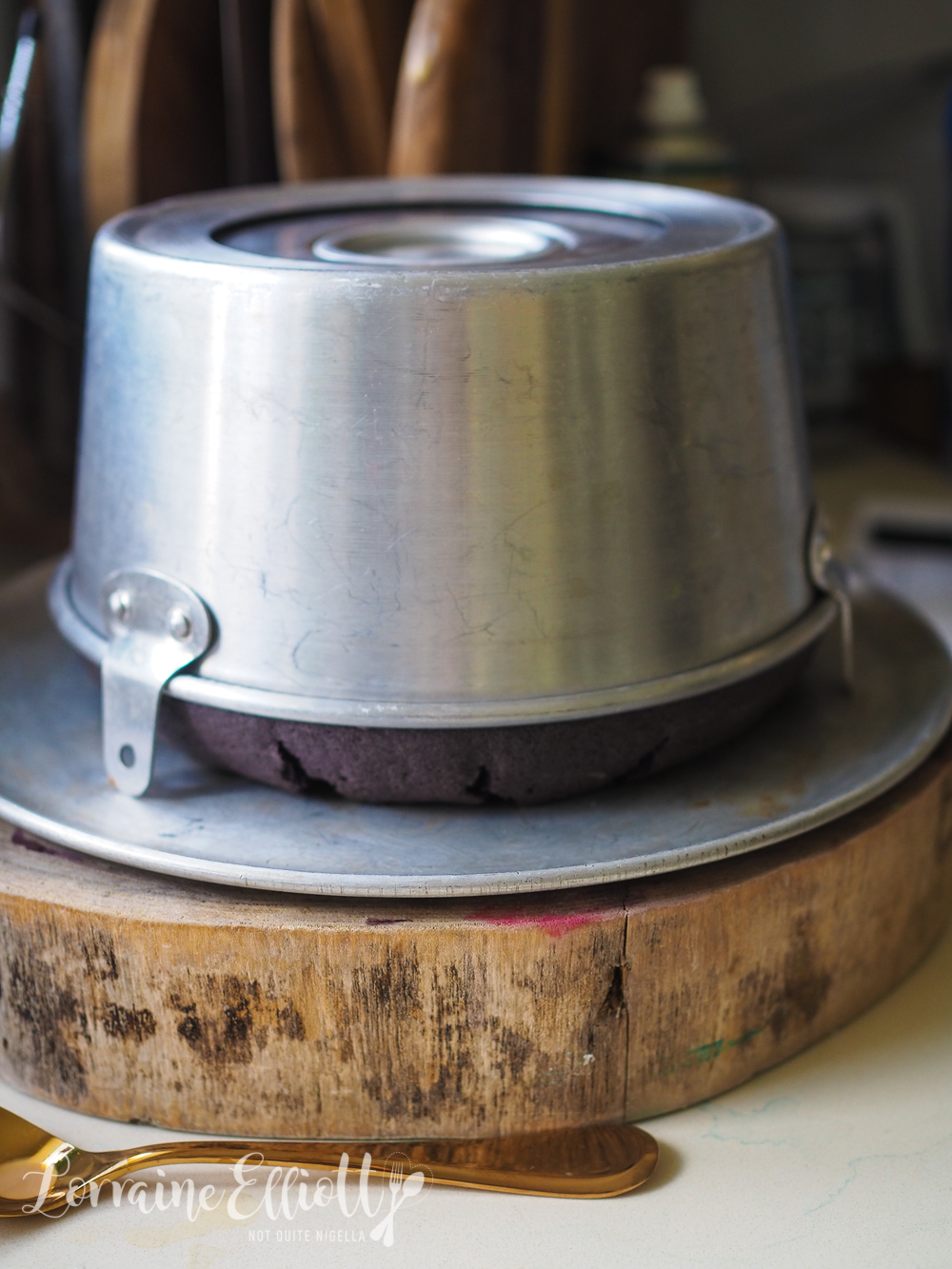 Step 6 - Run a thin knife along the sides of the cake tin and then run it across the top to dislodge it from the tin (you can also use dental floss for the top). Place on a cake disc or a serving plate. 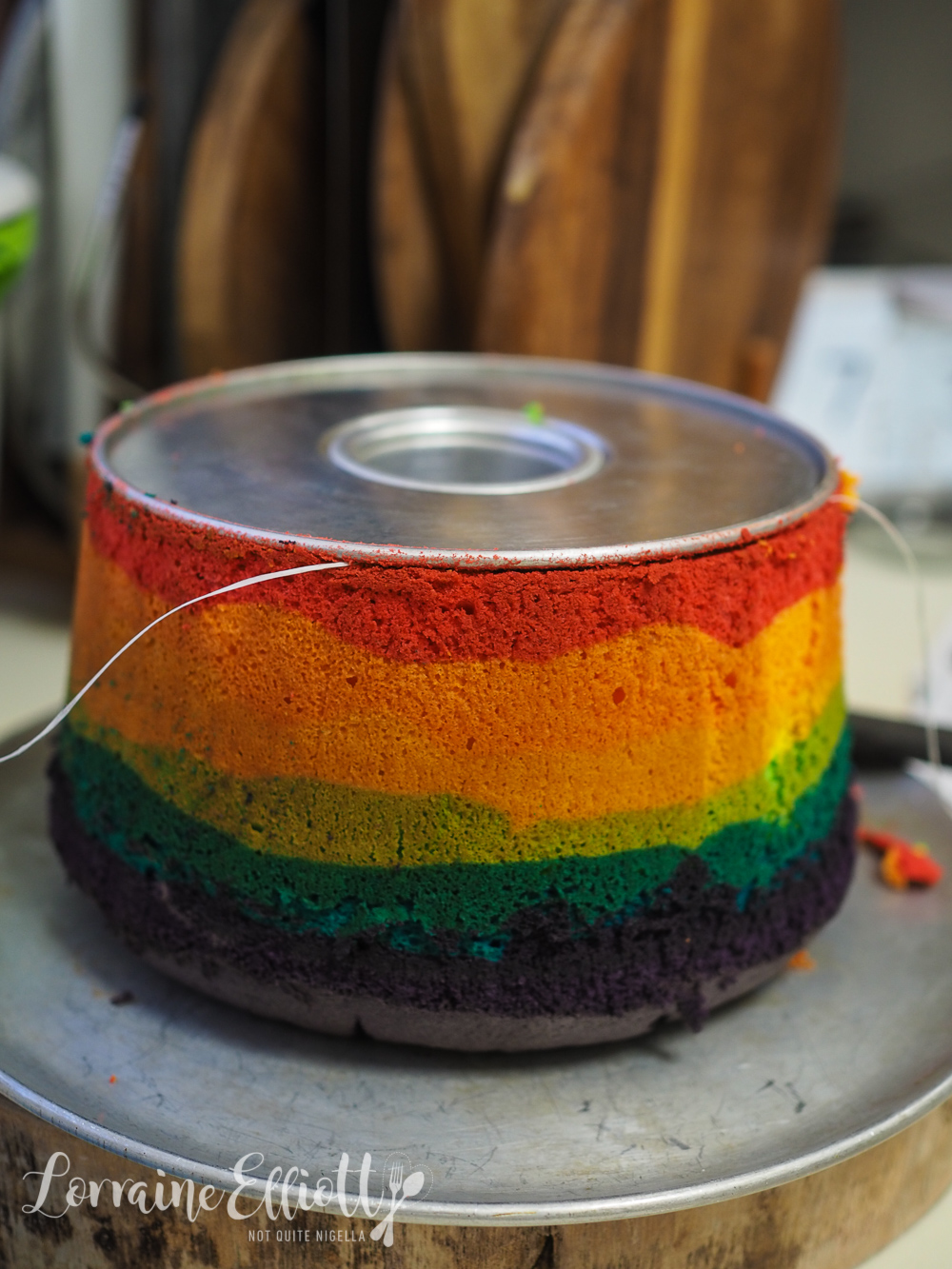 Using dental floss instead of a knife

Step 7 - Beat the butter until smooth for around 2 minutes. Then on slow speed add the icing sugar, cream or milk and vanilla and once added, increase the speed to medium and beat for 5 minutes or until the sugar doesn't feel gritty between your fingers. Separate it into two bowls with 1/3 of the mix in one and 2/3 in another. 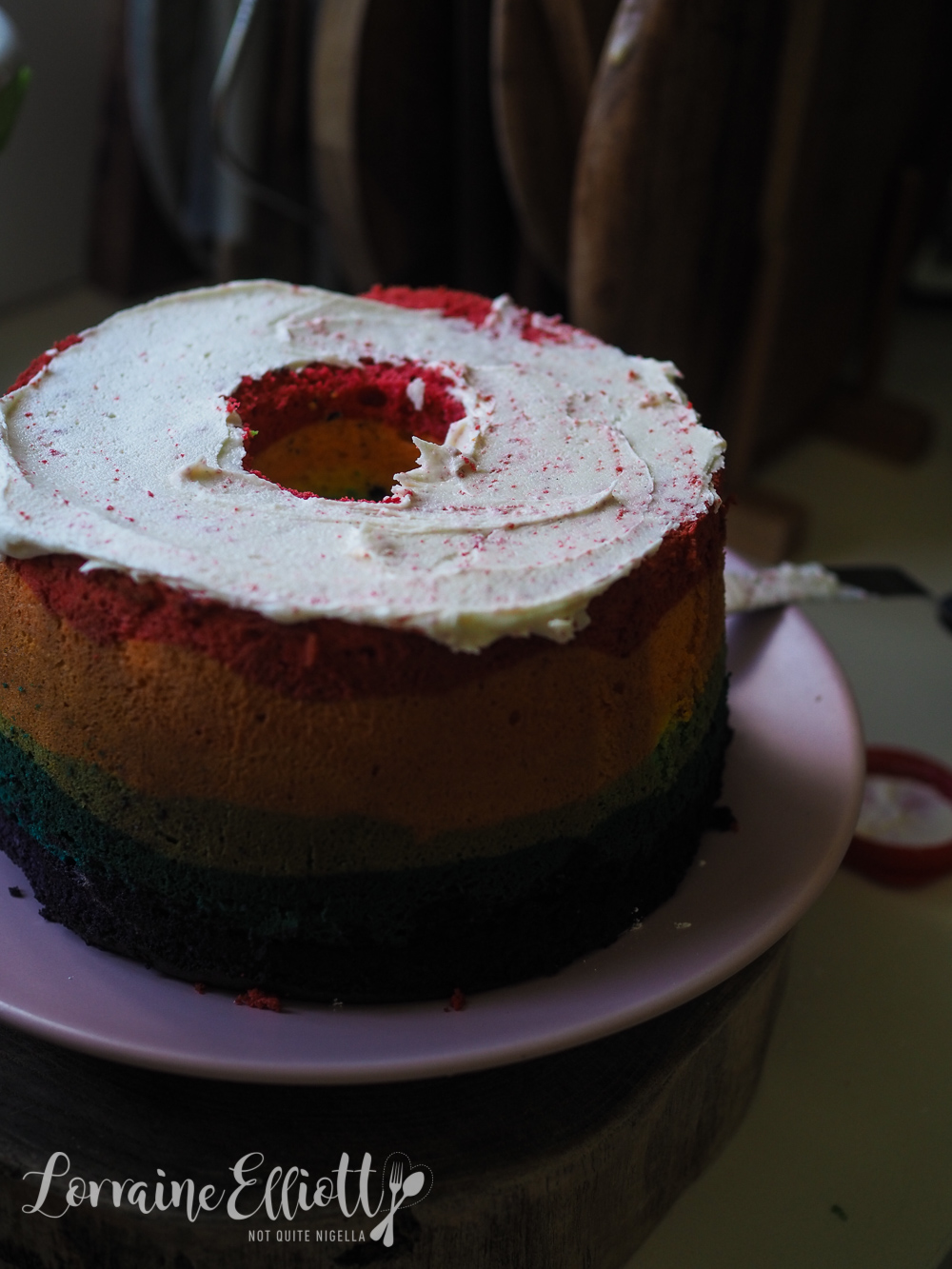 Step 8 - With the 1/3 of the frosting make a crumb coat-this catches all the crumbs because chiffon cake has lots of crumbs. Refrigerate for 20 minutes or until the buttercream has set. 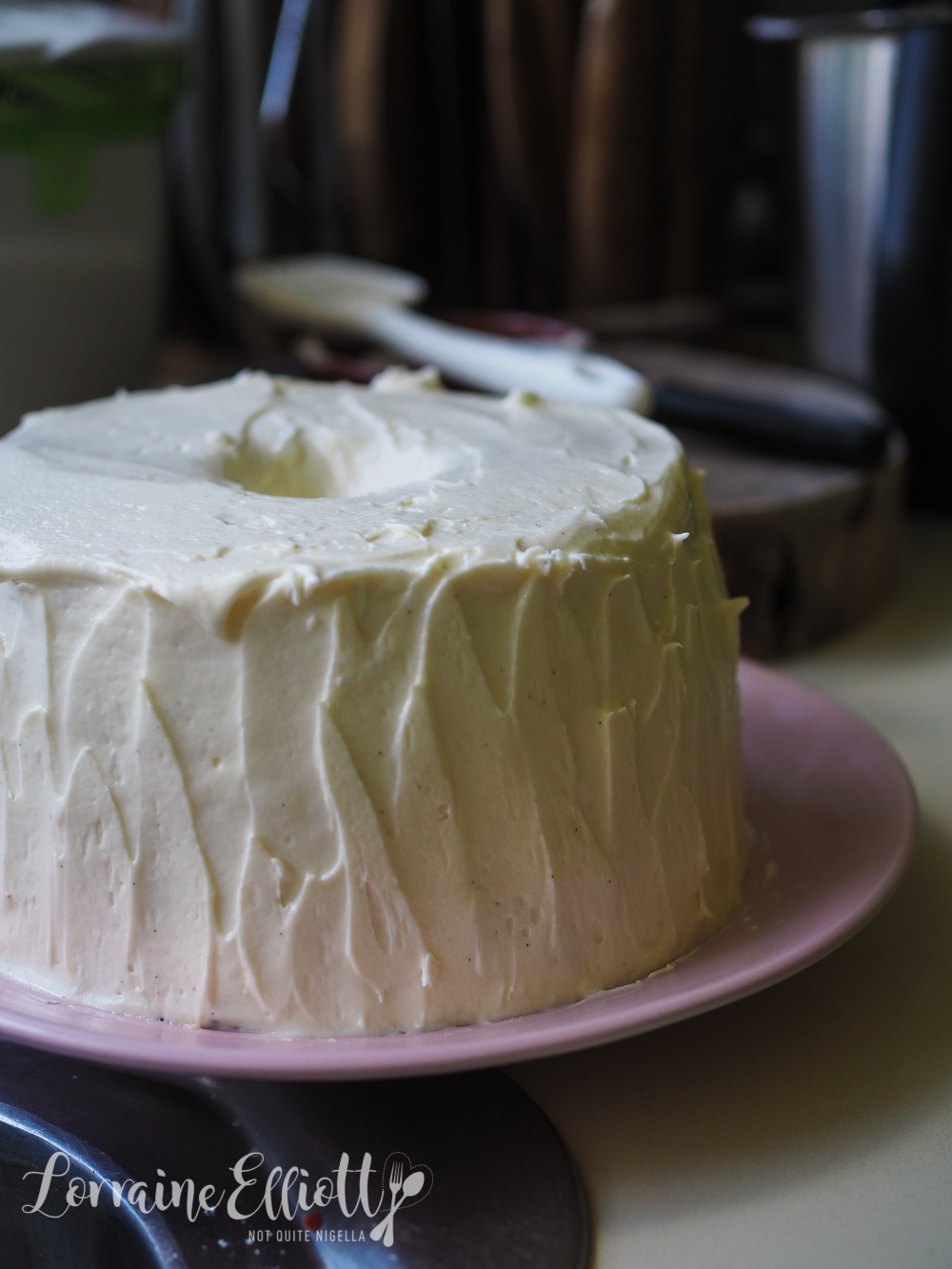 Step 9 - Then spread around the 2/3 quantity of the buttercream smoothing it on the sides, top and inside the centre. Sprinkle with confetti sprinkles. This cake can sit at room temperature. 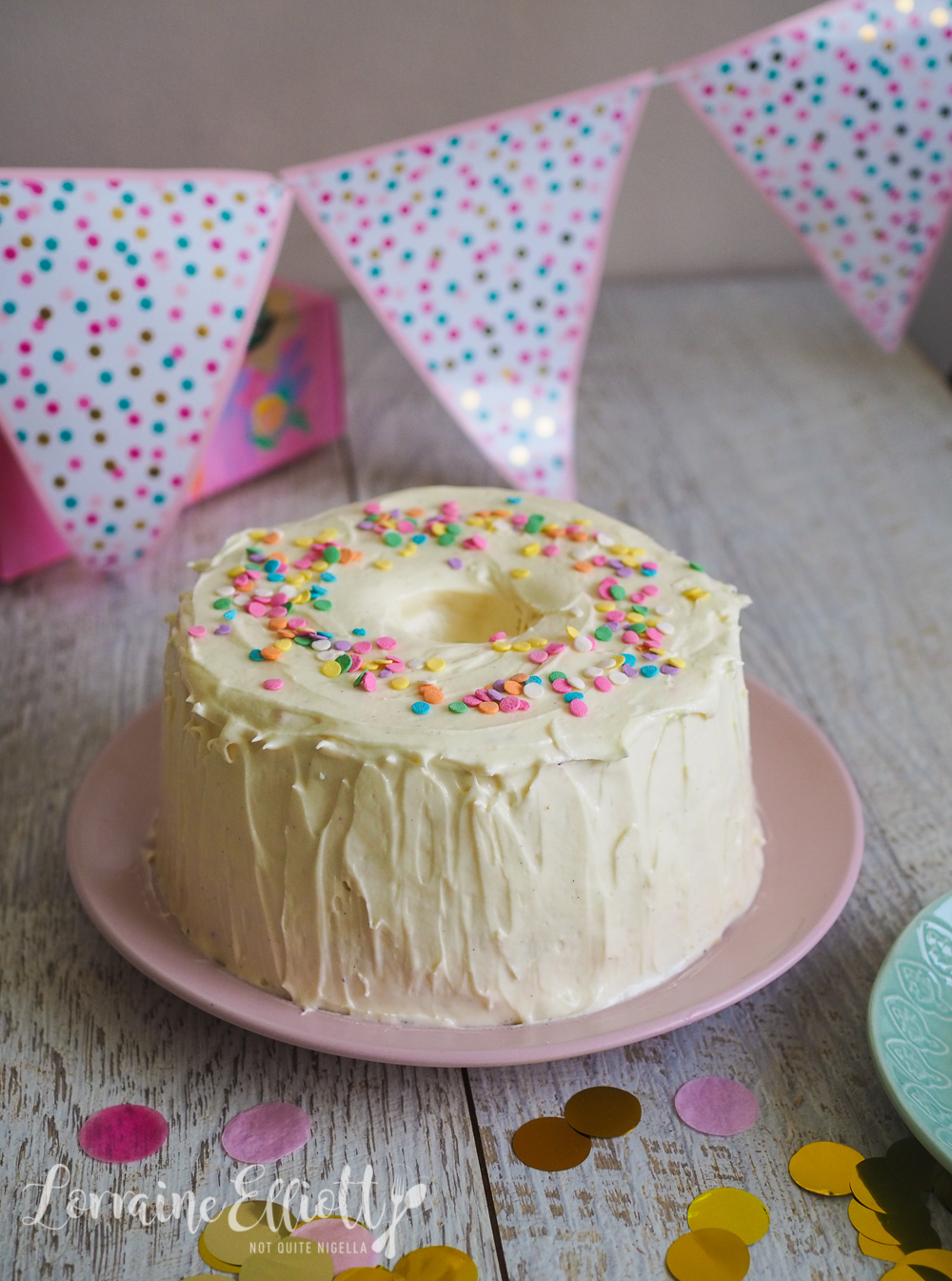