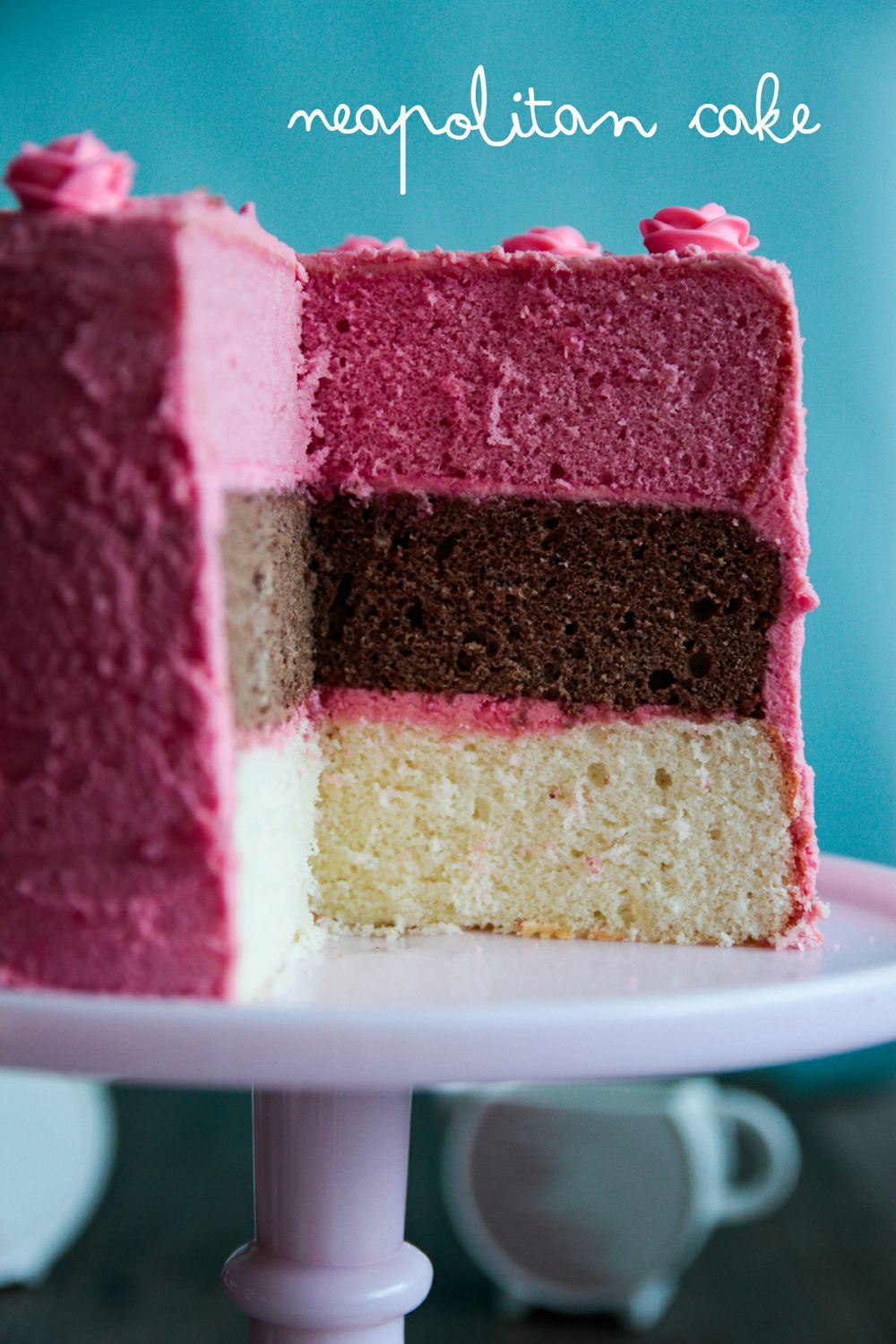 This year for Mother's Day, we had our annual Mother's Day picnic in Centennial Park. It is the one time in the year that all of the mums and families of Mr NQN's extended family get together and it's always a good excuse for cake and a bit of motherly pride. On that day Mr NQN's mother Tuulikki felt particularly proud of her youngest son Manu. He works in television as part of the crew and she was talking about his work on a television series called Underbelly which is about unsavoury underworld criminals in Australia.

Mr NQN, ever the imp asked her if she enjoyed watching the show. After all Tuulikki doesn't even like the colour black and nice, happy people with pure motives abound in her world. And as far as her kids go, they are rays of sunshine that can do no wrong, as you would hope a mother feels.

"Oh errm yes...well" she said looking around smiling gingerly and holding a finger to her chin, her trademark gesture when she is thinking. Underbelly is full of crooked police, prostitutes and criminals and I could see that she was struggling to make a positive comment about the show's storyline. But then her eyes lit up and her pointer fingers rose skywards like an orchestra conductor! "Oh yes! The colours in this television show are very beautiful!" she said in her sing song Finnish accent. 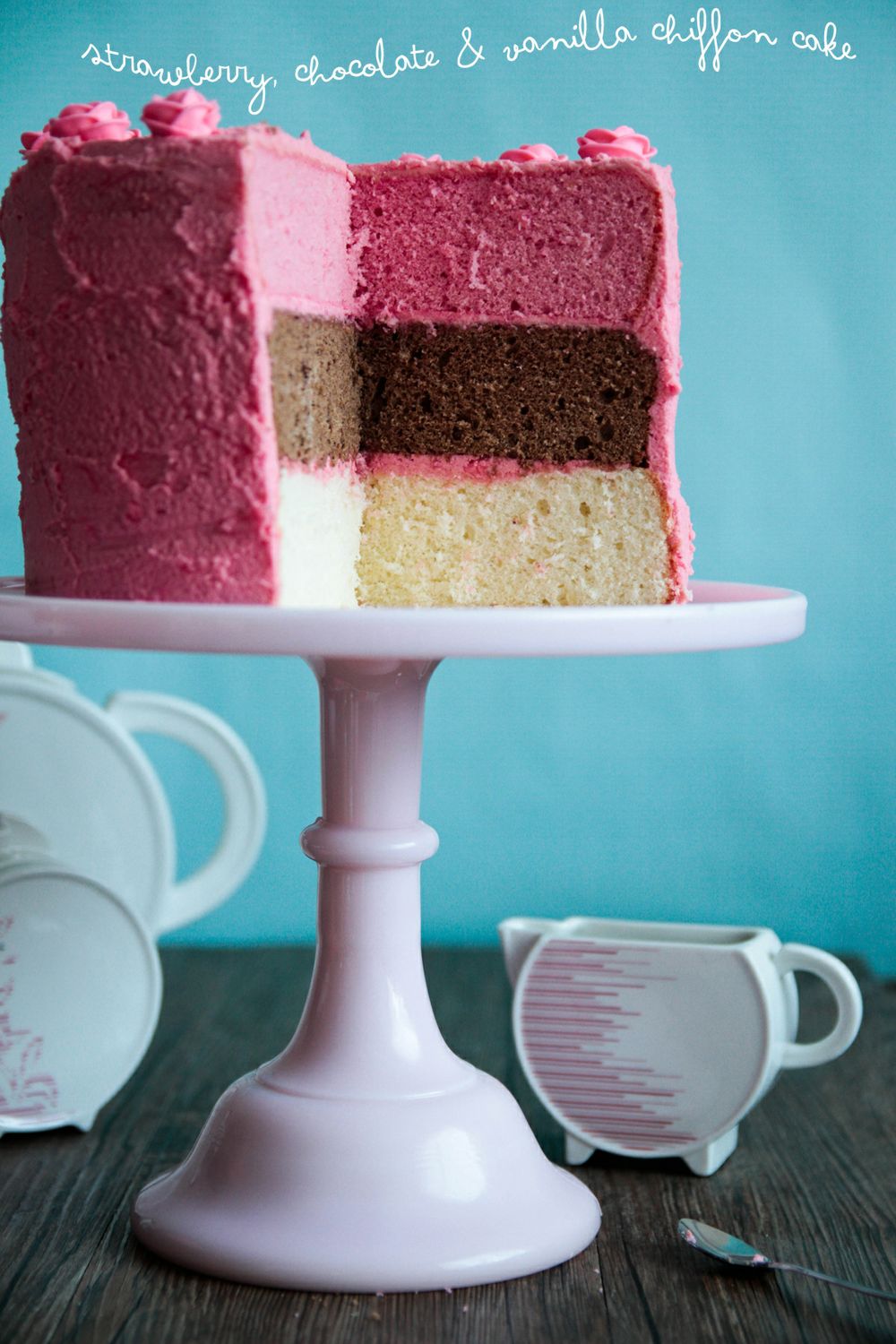 This cake is for the mothers that believe in their kids and believe that they can do no wrong. It's an enormous cake as you can probably tell and if truth be told, I had no idea that it would be that high at 15 cms or 6 inches iced and would necessitate repositioning the shelving in my fridge to accommodate it. But for large multi family crowds it's actually not a bad size at all. It's a chiffon sponge cake which is really so light and gorgeous and I decided to make it in three flavours for a Neapolitan cake in raspberry, chocolate and vanilla. 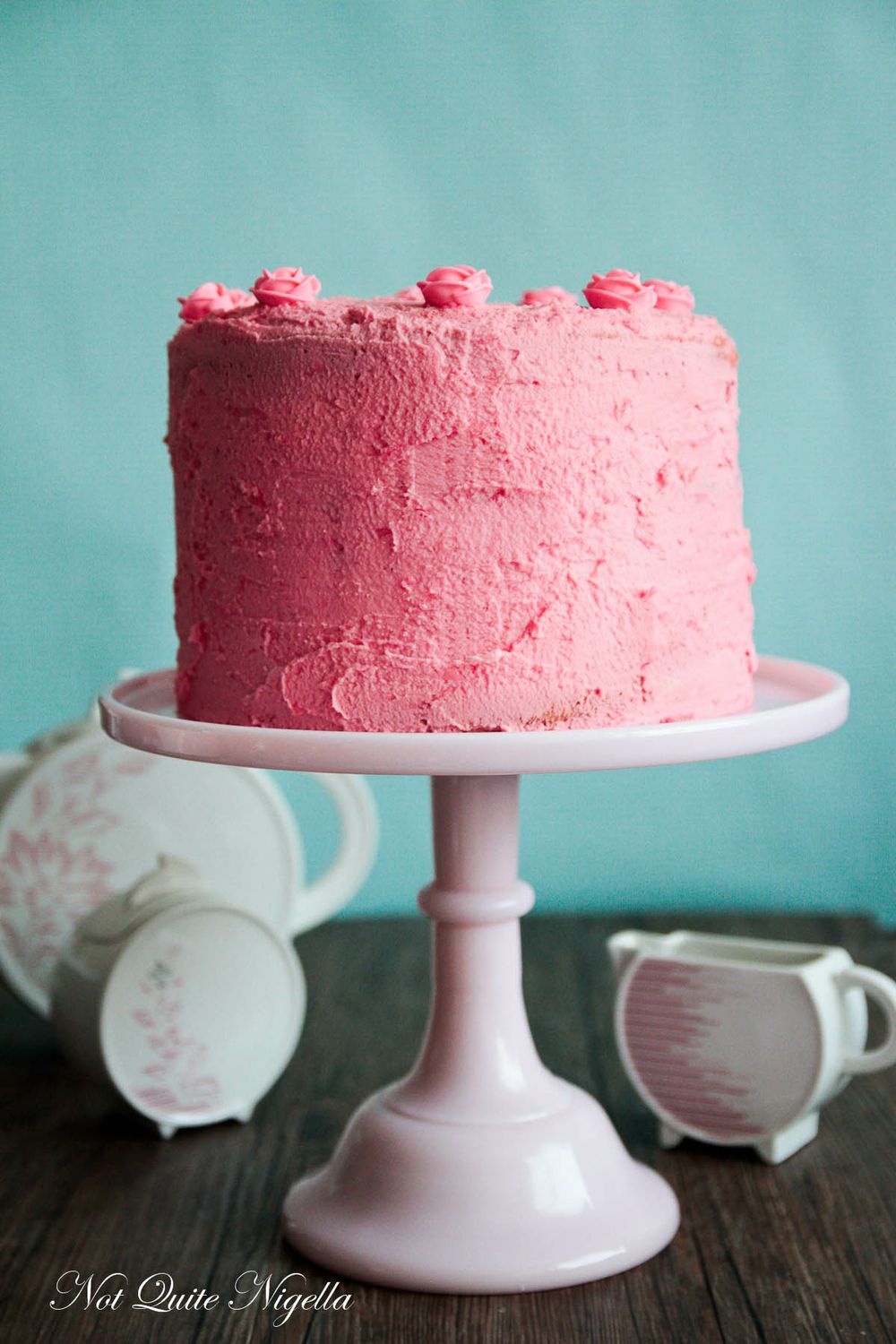 It does require the largest mixing bowl you can find but I do promise that if you want an attention grabbing cake this is it. It transfixed little Aura Lily to an almost obsessional level during the afternoon. The cake also has the advantage of being able to be made days ahead of time and it keeps beautifully and doesn't dry out at all. Even five days later I shaved off a little slice from what was left over and it was still soft and delicious. I covered it in whipped, stablised cream which was a tip that I got from Eva's clever post here. It is where you add a bit of gelatine to the whipped cream to set it so that it doesn't melt and can be transported a little easier. I would recommend slicing it in thinnish pieces because it is effectively three cakes but also know that this doesn't stop seconds or thirds which is what all proud cooks want. 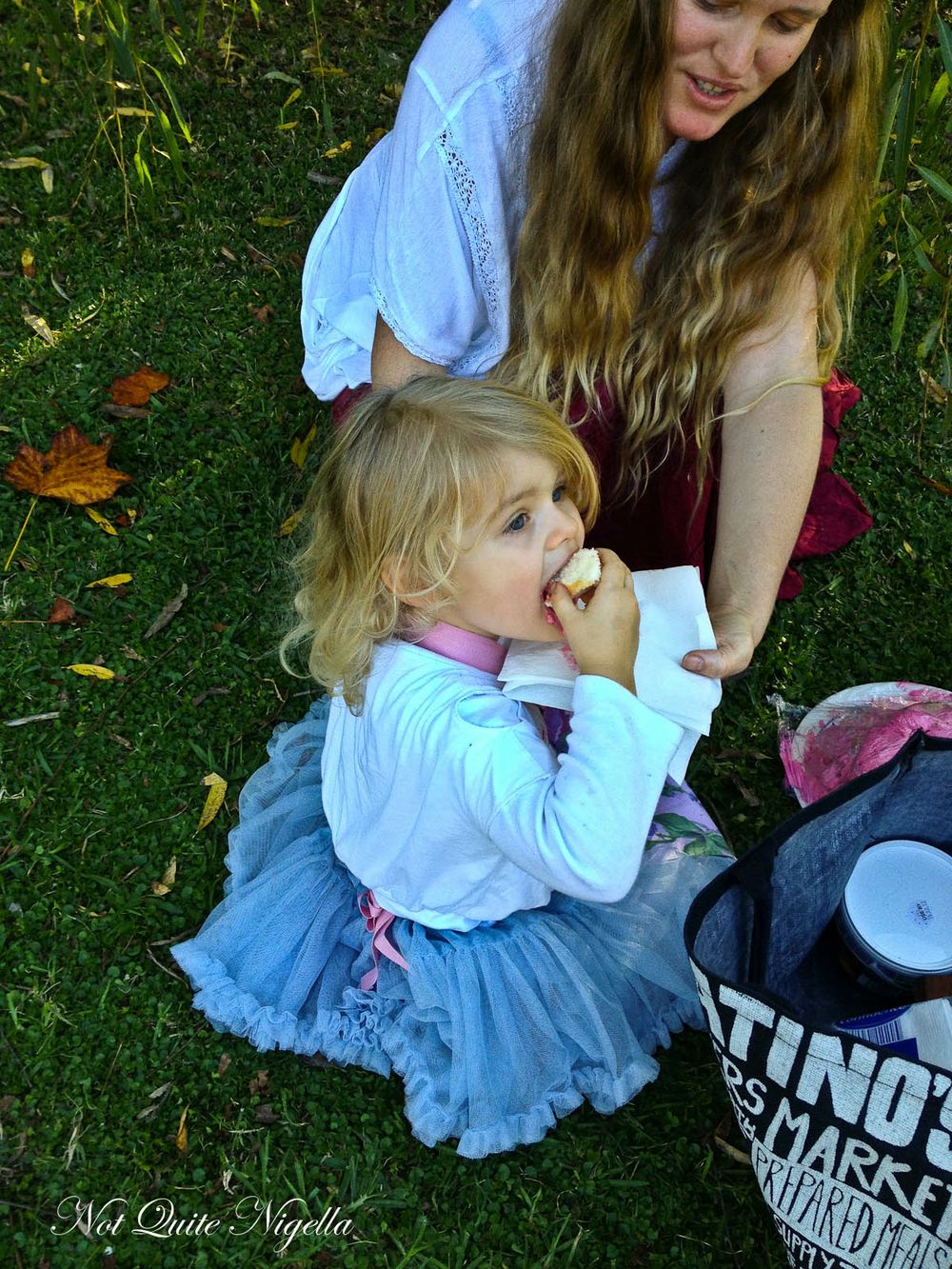 Aura finally getting a slice of cake! 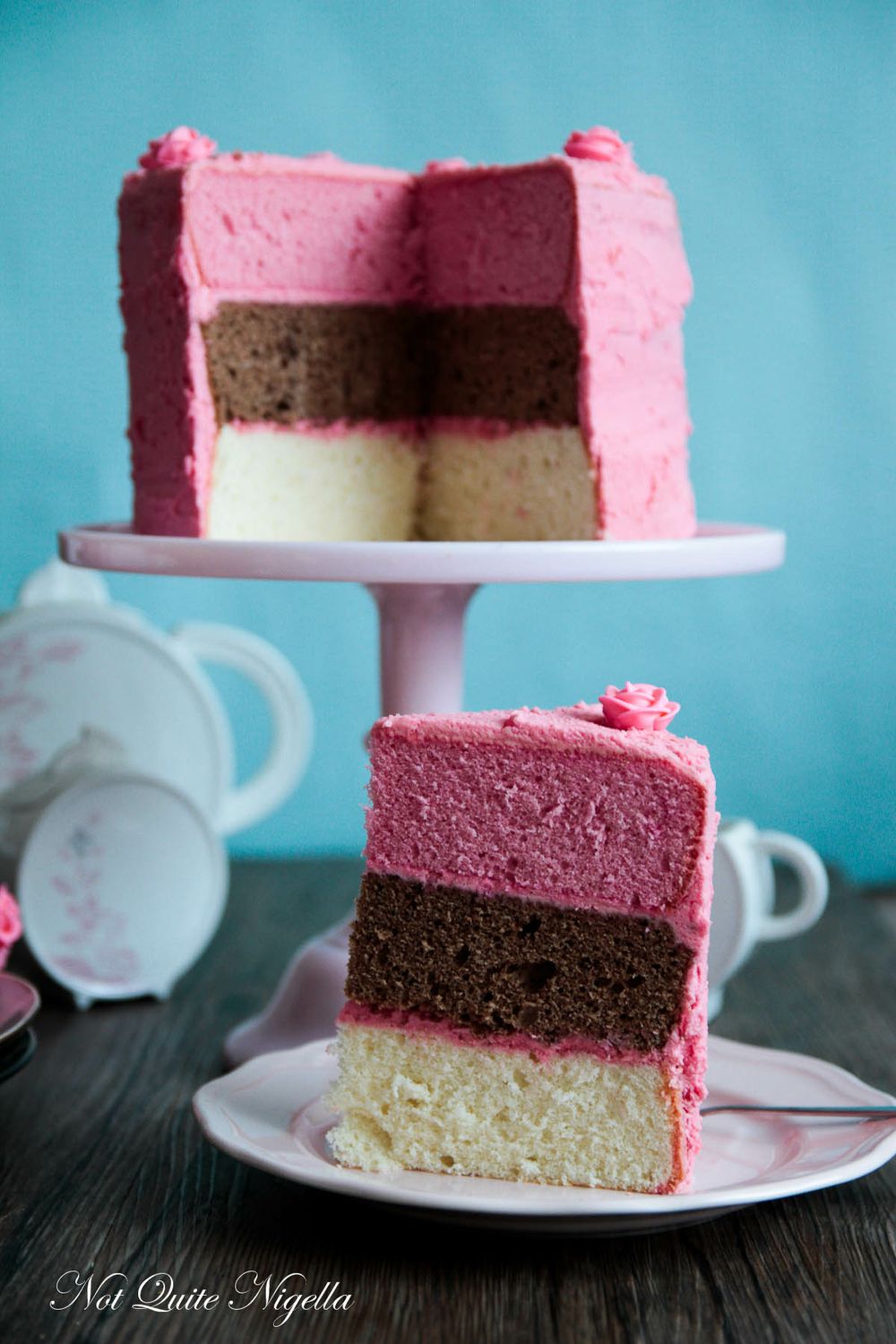 And I've got some really exciting book news updates and media articles to share! My friend Laura was in David Jones Bondi Junction when she texted me this picture below! My book is in the Top 10 books at number 5! This prompted a happy dance in the middle of uber cool Surry Hills where I'm sure that people were looking at me oddly! 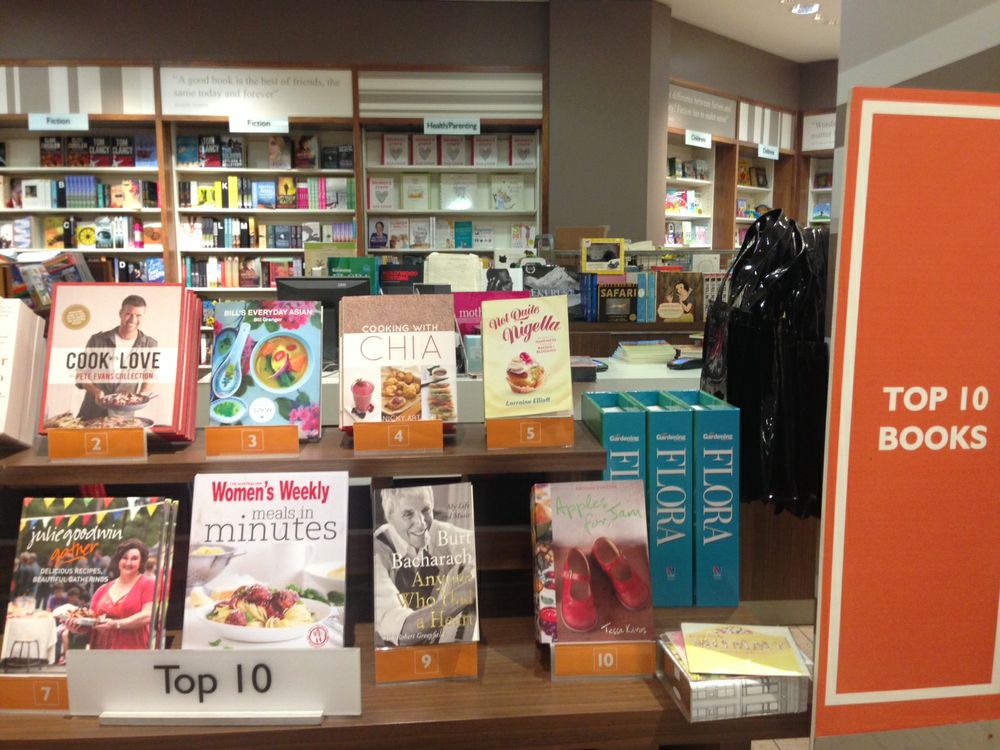 I was also interviewed for Townsville Eye and they did an amazing cover story that went across two pages! 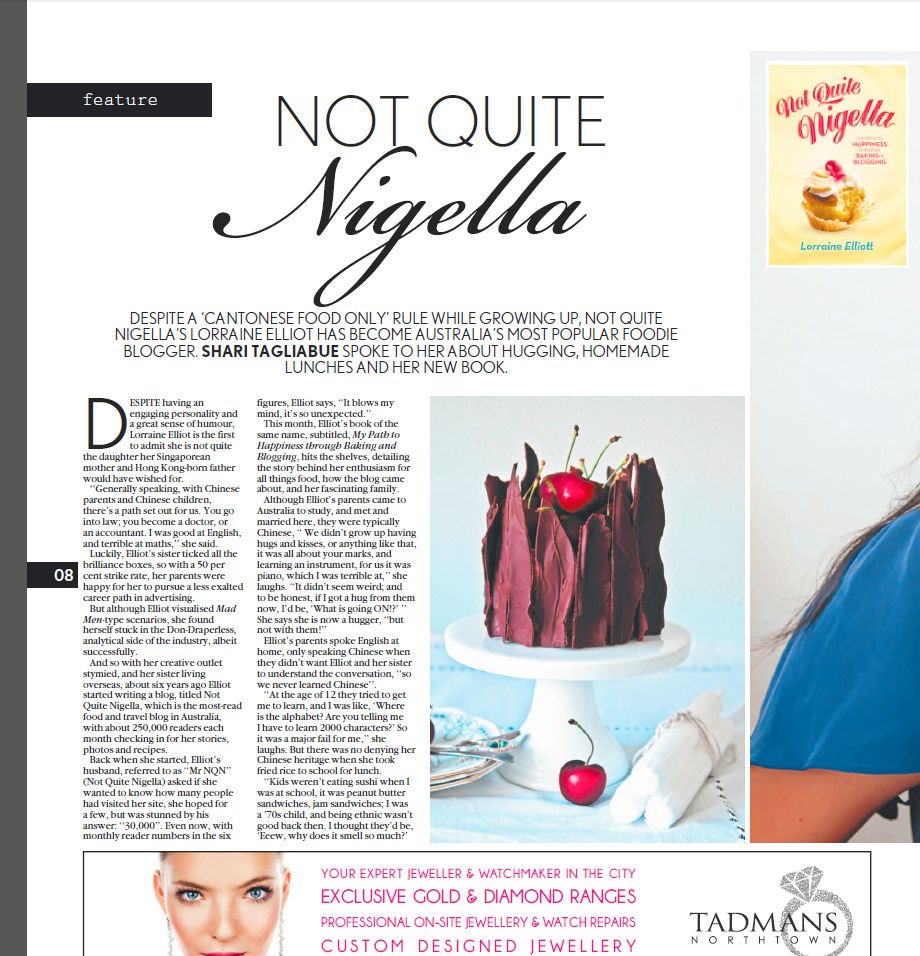 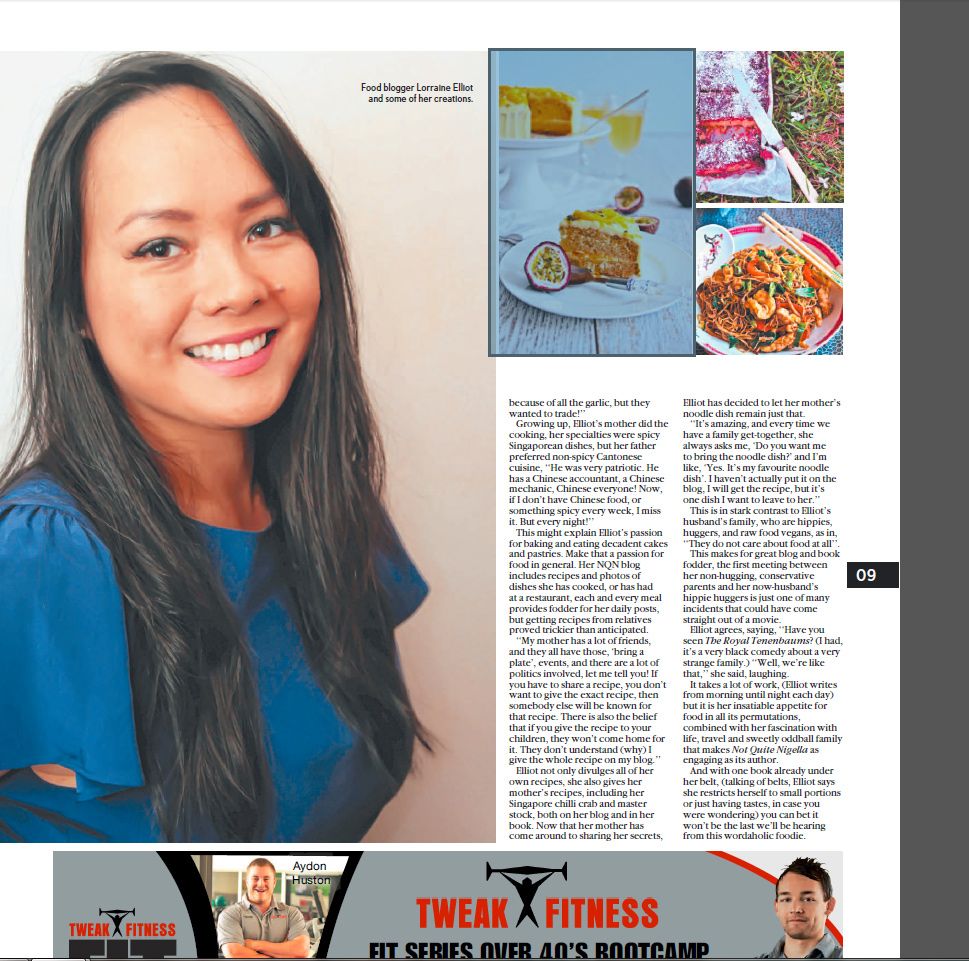 There was also a one page in Good Food last week (click to read online version) where I share dinner party tips. 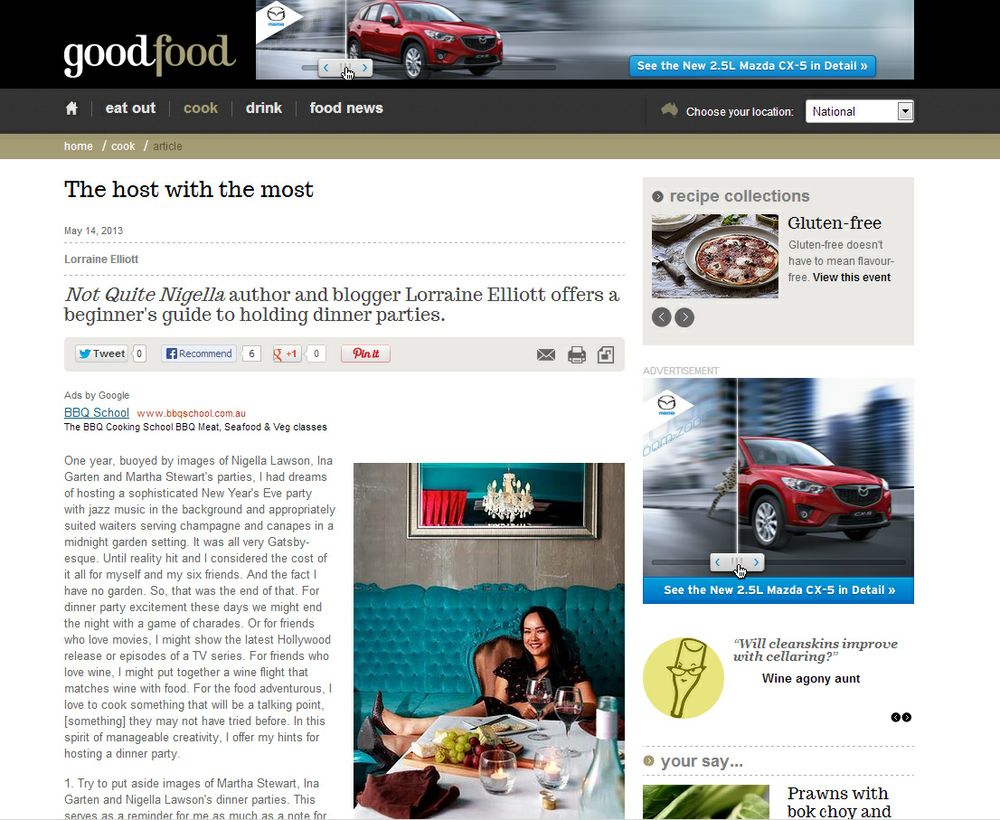 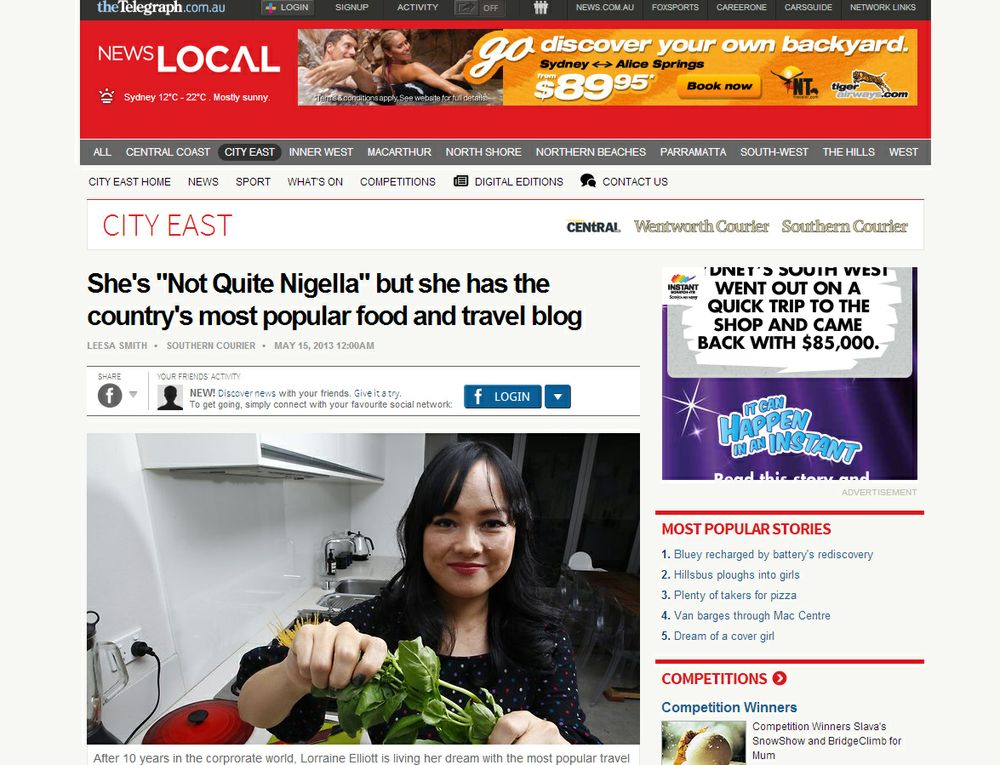 There was also an article in Tech Life! I must admit that I was a bit worried that it was going to be another article slamming food bloggers but was relieved to read that it wasn't. 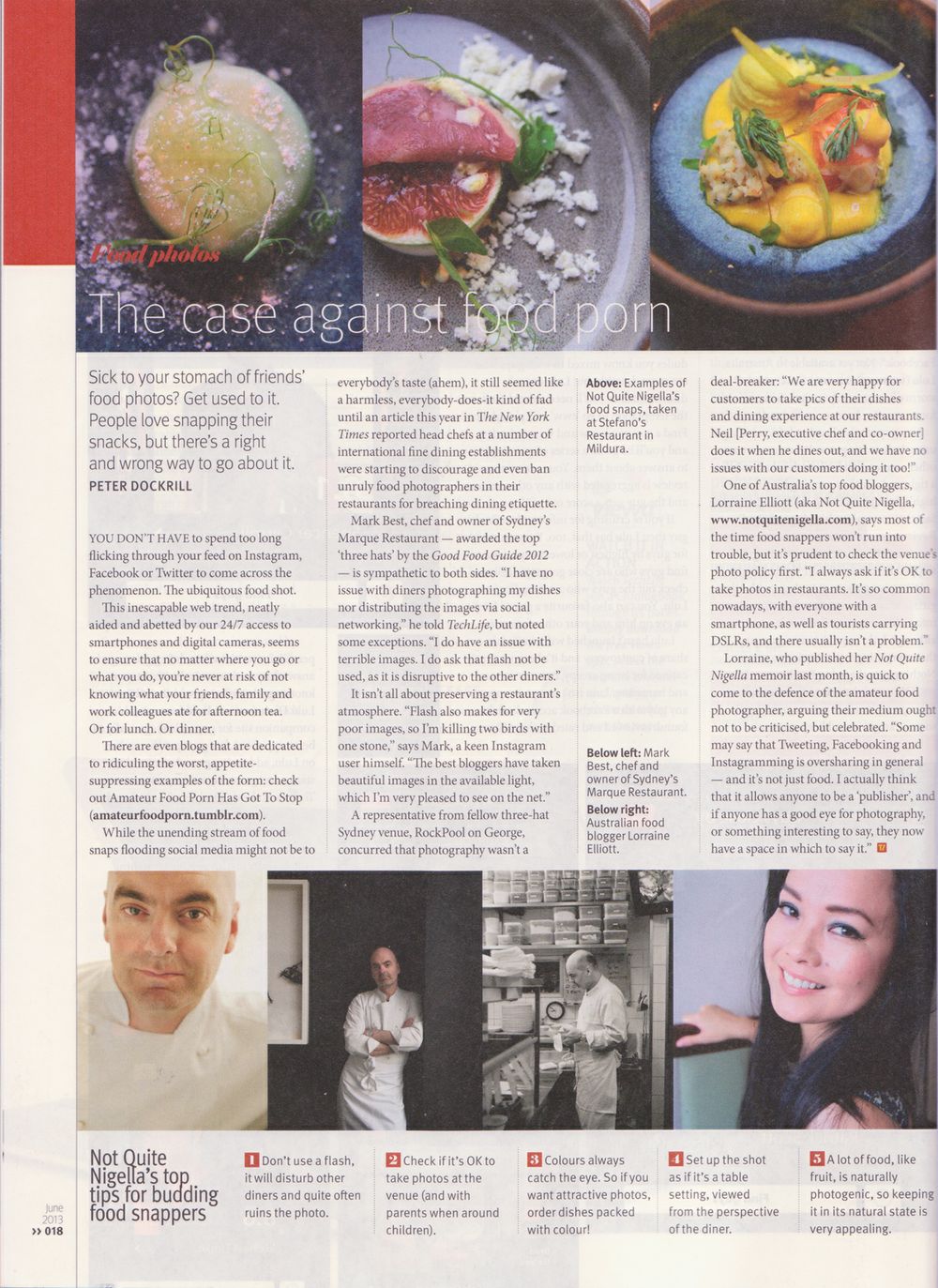 As well as mentions in Cleo and the final issue of Madison magazine! 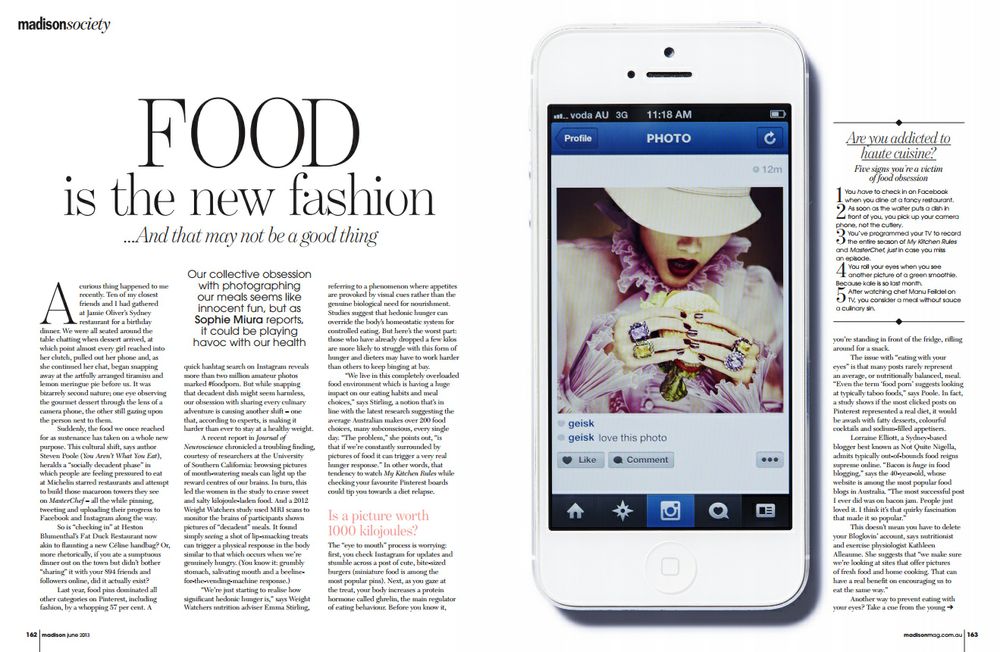 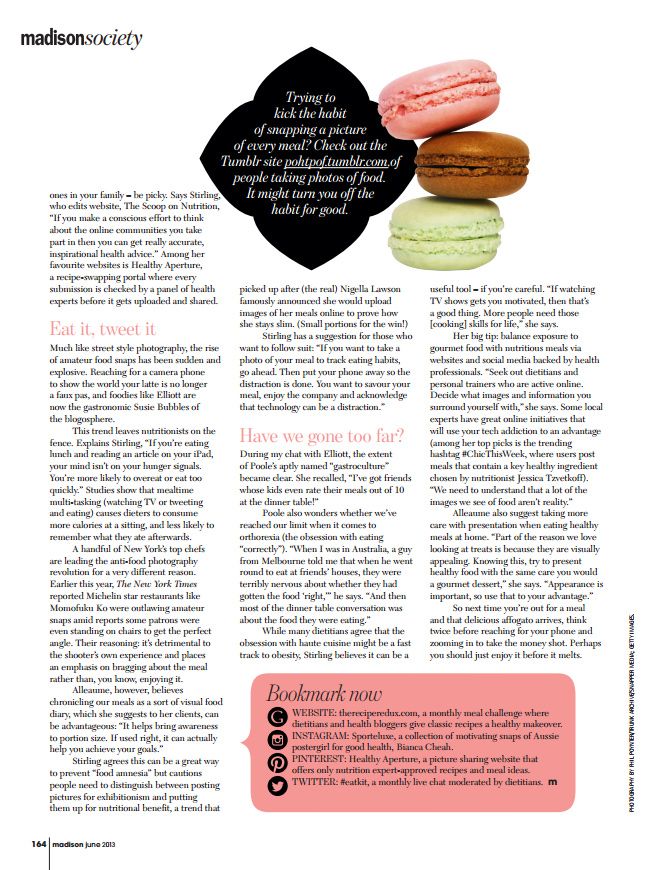 And sureally, a guy was reading my book on an episode of The Project on tv last week (ironically on a story about people taking time off the internet! ;)). 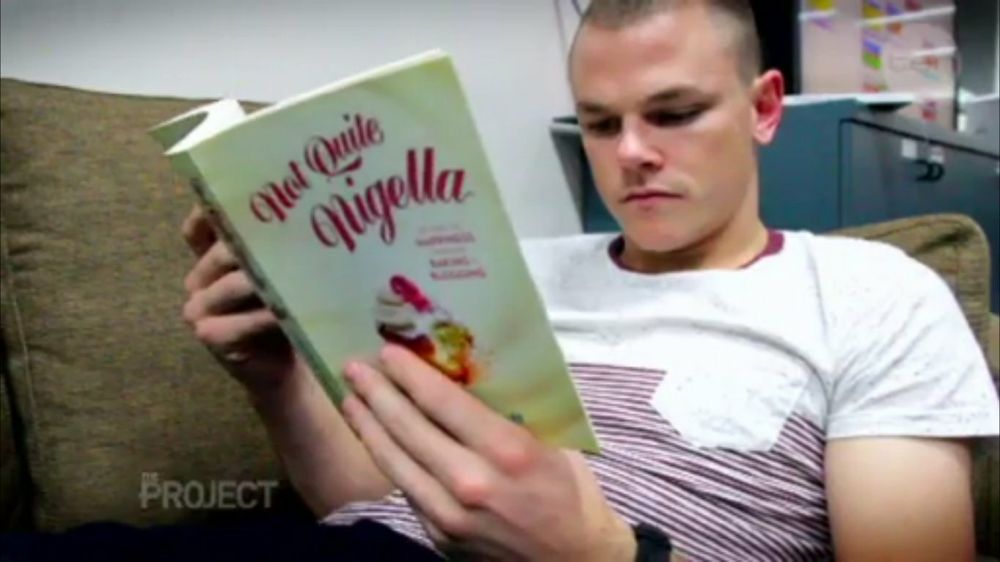 And then Maureen, Christie, Joanne, Steph and Sam wrote wonderful posts about the book!

So tell me Dear Reader, what is your mother like? And what did you do for mother's day and if you're a mum, what would be the best present ever?

Degree of difficulty: medium to high (manly because of its size)

*To make 1 cup of cake flour, add two tablespoons or cornflour or cornstarch to a measuring jug and fill to the one cup measure with plain, all purpose flour. You can also buy cake flour at the supermarket nowadays.

Step 1 - Preheat oven to 160C/320F. Grease and line three round springform tins 20cms or 8 inches in diameter with baking parchment. In a largest bowl you can find, sift the flour, sugar, baking powder and salt from a slight height to get some air into the mixture. In a large jug mix the oil and water and egg yolks. Make a well in the centre and add the oily, eggy liquid and mix until smooth. 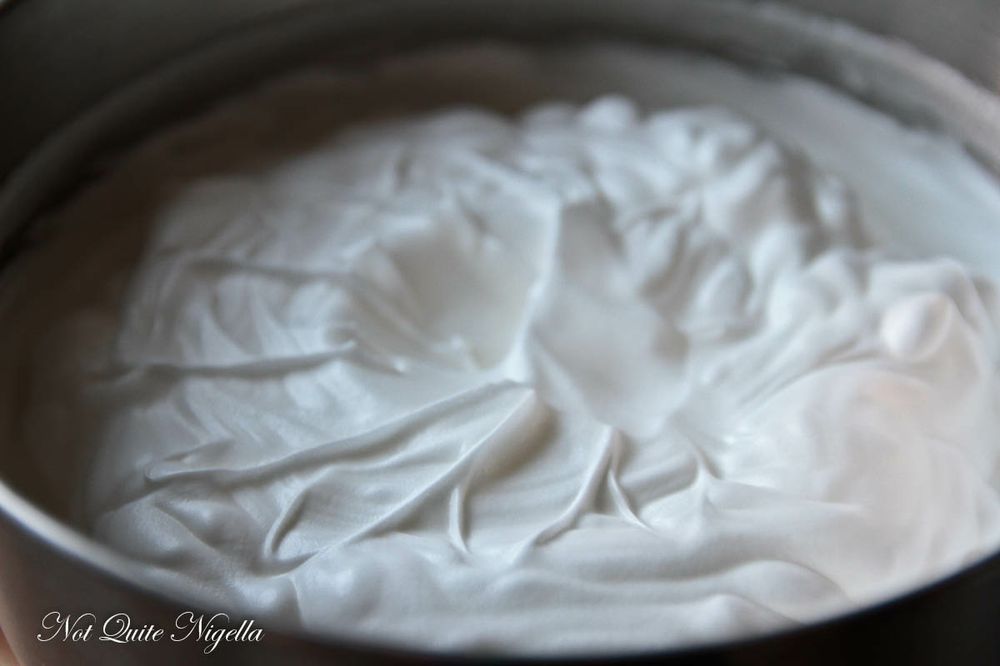 Step 2 - In a clean bowl, beat the egg whites with the cream of tartar until soft peaks form. Add in the sugar gradually and beat until glossy and stiff-I test it by turning the bowl carefully upside down and if it holds, then it is ready. Fold a couple of tablespoons of the egg whites into the egg yolk and flour mixture to loosen it up  and then keep adding it in folding gently so as not to lose too much air. You want the yellow and white streaks to disappear and the mixture to take on a homogenous palest yellow shade. It may take a while to do this, be patient but it is a big mixture. 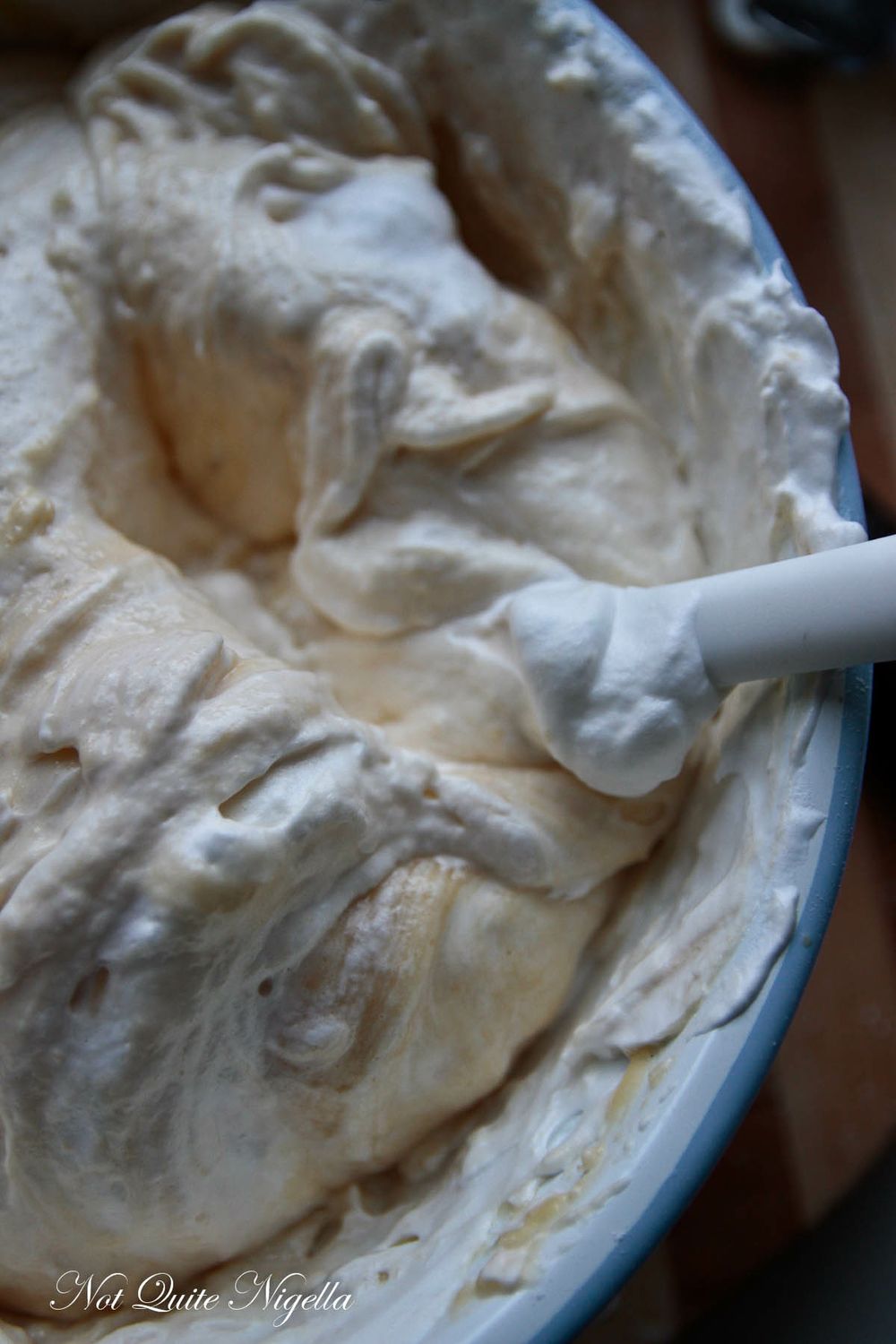 Streaks-good in hair, not good in cake ;)

Step 3 - Divide the mixture into three-I'm a bit fussy and I wanted to make sure that I had the exact amounts in each cake but it doesn't really matter. I found that the pink didn't rise as much as the vanilla because I used more liquid pink colouring. I weighed the mixture and divided it by three. I then sifted the cocoa into one of the bowls to make a chocolate layer, added the vanilla extract to another to make the vanilla cake and added the raspberry flavouring and pink colouring to the last one to make the pink layer. Then gently spoon them into the three tins and tap them gently on the benchtop to get rid of large air bubbles and bake for 35-40 minutes until a skewer inserted comes out clean. Cool completely in tin and you can wrap and freeze these layers until you need them.

Step 4 - To make the stabilised cream, place the gelatine and water in a bowl over a double boiler until it has melted (you can also do it in a microwave which is what Eva did). Drizzle into the cream as it is whipping and add the sugar and food colouring in. 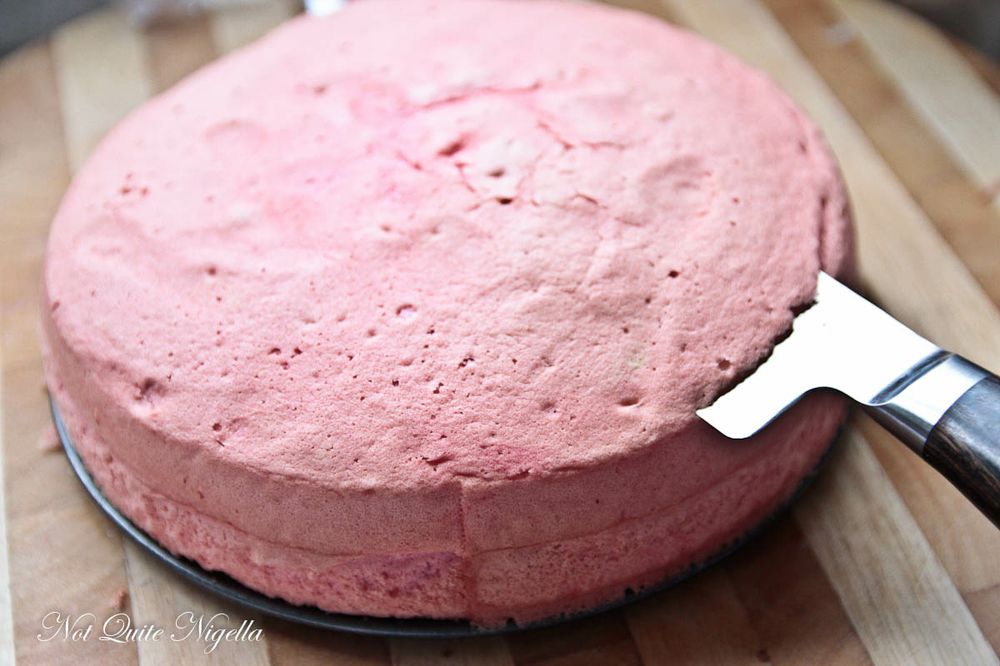 Step 5 - When ready to decorate, remove paper from cakes and trim the tops of the cake so that they are even. I use the cakes base side up so that there are as few crumbs as possible. Spread a layer of the cream between layers with an angled spatula. Cover the cake with more cream and add sugar roses on top. Keeps covered in the fridge for 4-5 days. 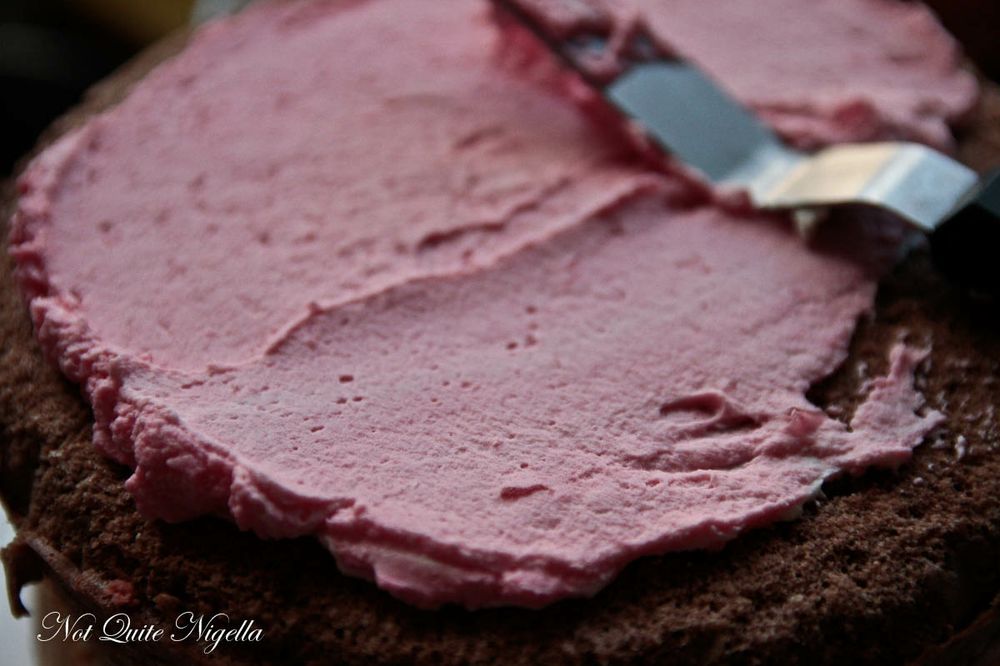