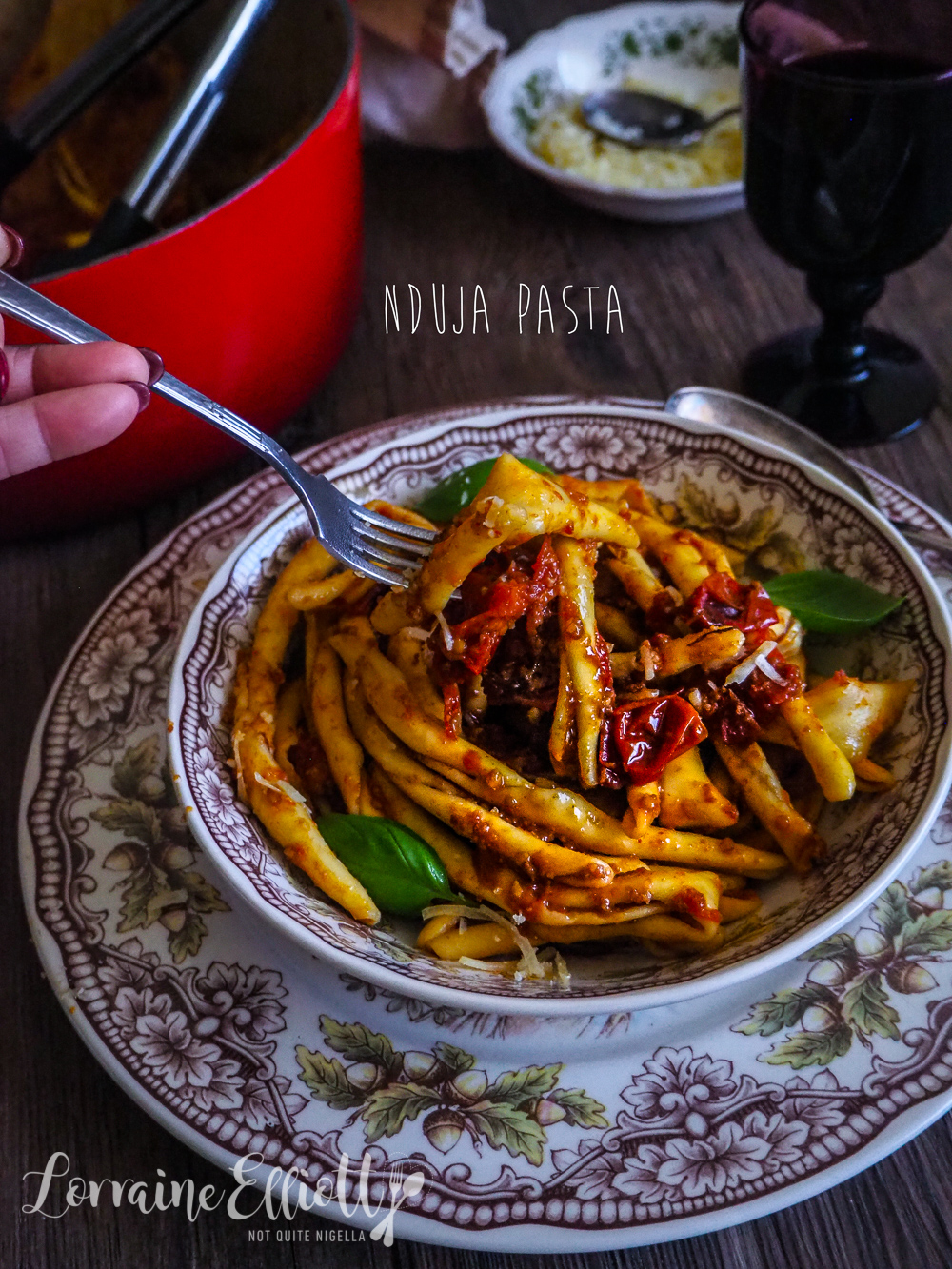 Chery tomatoes are abundant now and if you have an excess that needs using up then this roasted tomato sauce is a quick but super tasty way to use up the season's tomatoes. Pair it with nduja (or feta if you're keeping it vegetarian) and some fileja or corkscrew pasta and you've got a spicy powerhouse pasta that tastes of Calabria! 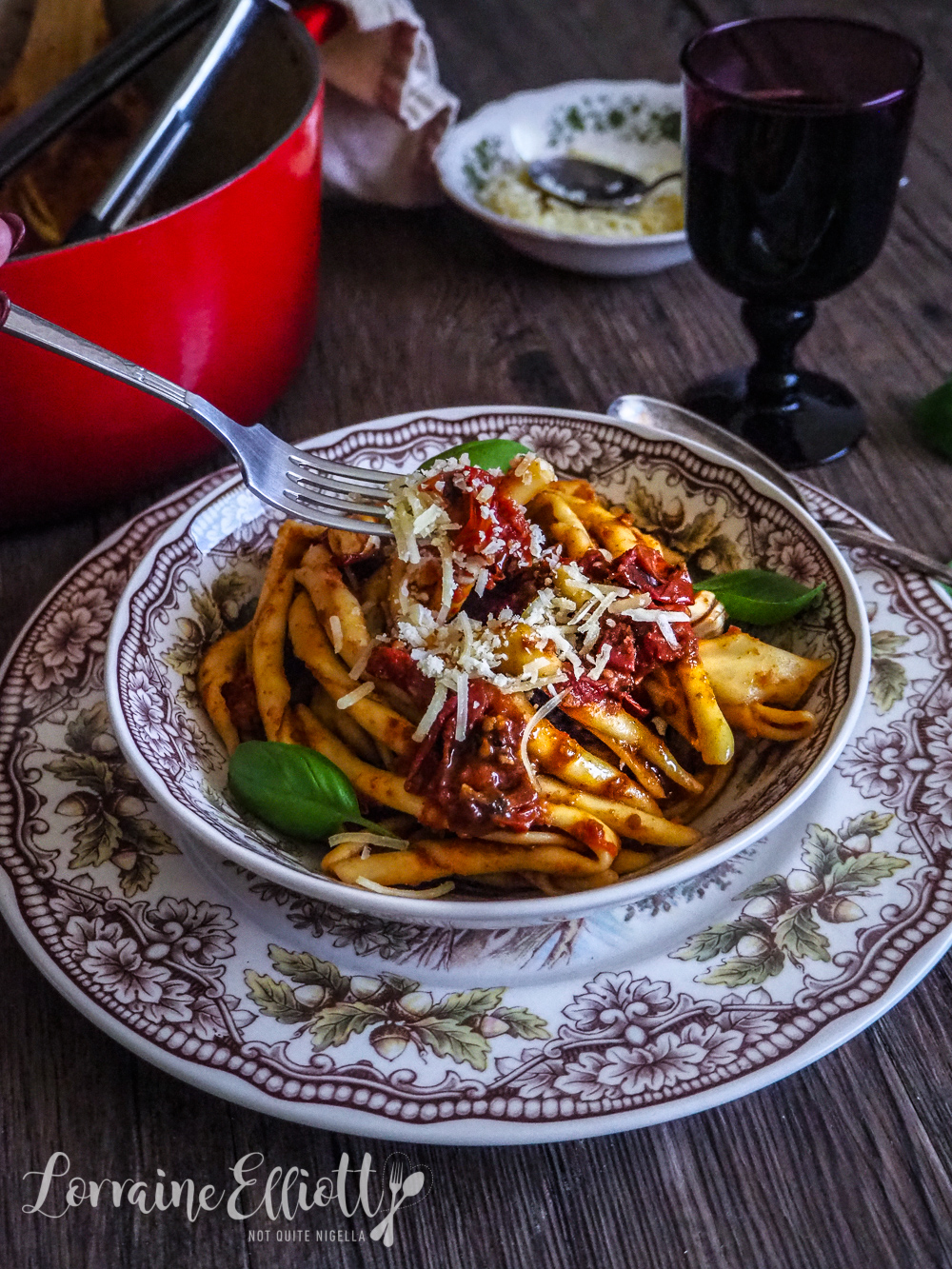 This delectable pasta came about in the most roundabout way. I had bought some cherry tomatoes at the market as they are always a favourite for me in salads during summer. Then I saw a stand selling 3x250g punnets of cherry tomatoes for $1.80. I can't resist a bargain so I ended up with a kilo of cherry tomatoes but I knew that the cheaper tomatoes wouldn't last long. So the next day I roasted them with some Italian vincotto (reduced, syrupy grape must) and some molten lava hot salt from Canada and it produced the most delectable sauce. The tomatoes were sweet, even sweeter than the sun could have kissed them.

I have had nduja pasta on my "to make" list for months. I hadn't come across nduja in my travels or shopping so it sat on the list largely ignored. Until I was running out of ground spices and I popped into a deli. Needing to meet the minimum purchase for my credit card I saw a packet of nduja! Into my basket it went. And then I decided to pair it with this cherry tomato sauce. 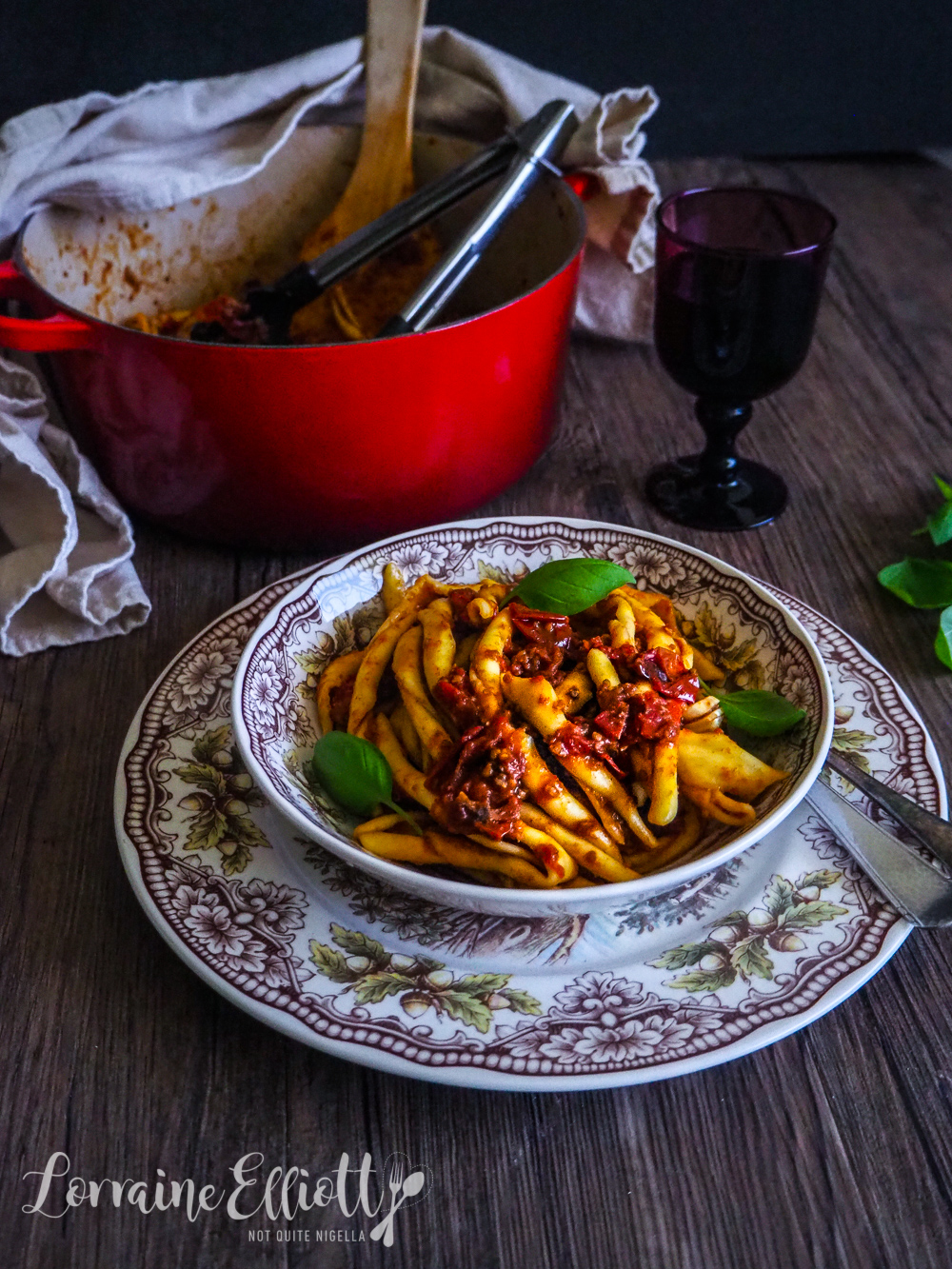 I like to think I'm on top of what is in my pantry but truthfully it's a jumble in there and I don't know what I might pull out any day of the week. I'm often saying to myself, "Where did I get that from?". And when I went rummaging in the cupboard I found a corkscrew pasta shape that I had no memory of buying (I like to think it's probably shopping elves). I didn't even now what it was called but when I searched for the perfect pasta shape for nduja it was this one! 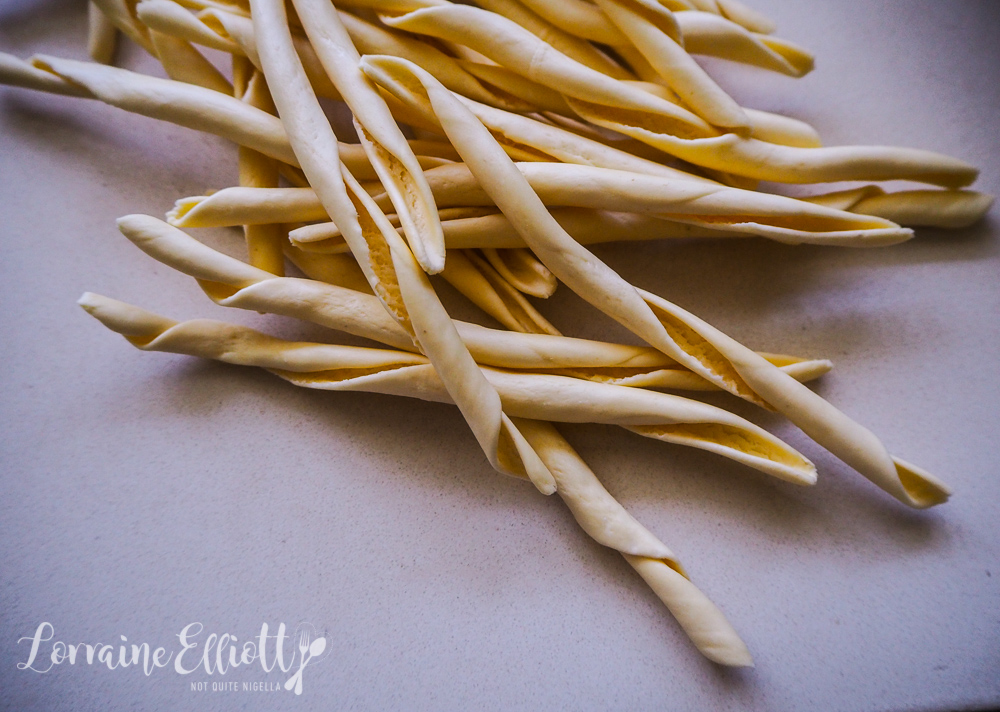 Fileja (where the j pronounced as a y) or Scialatielli is a Calabrian pasta from the province of Vibo Valentia. It is the pasta shape most often paired with nduja. I learnt how to make it at a class where it was made by rolling dough around knitting needles or wire and it's a wonderful shape for catching sauces. It takes a little practice to make this shape but once you do, it's straightforward.

I wish I had other talents- being able to name all the pasta shapes in the world is one of them. But perhaps it's likely that I can't remember them because on the weekend we did an escape room that was rather eventful one (for me at least). 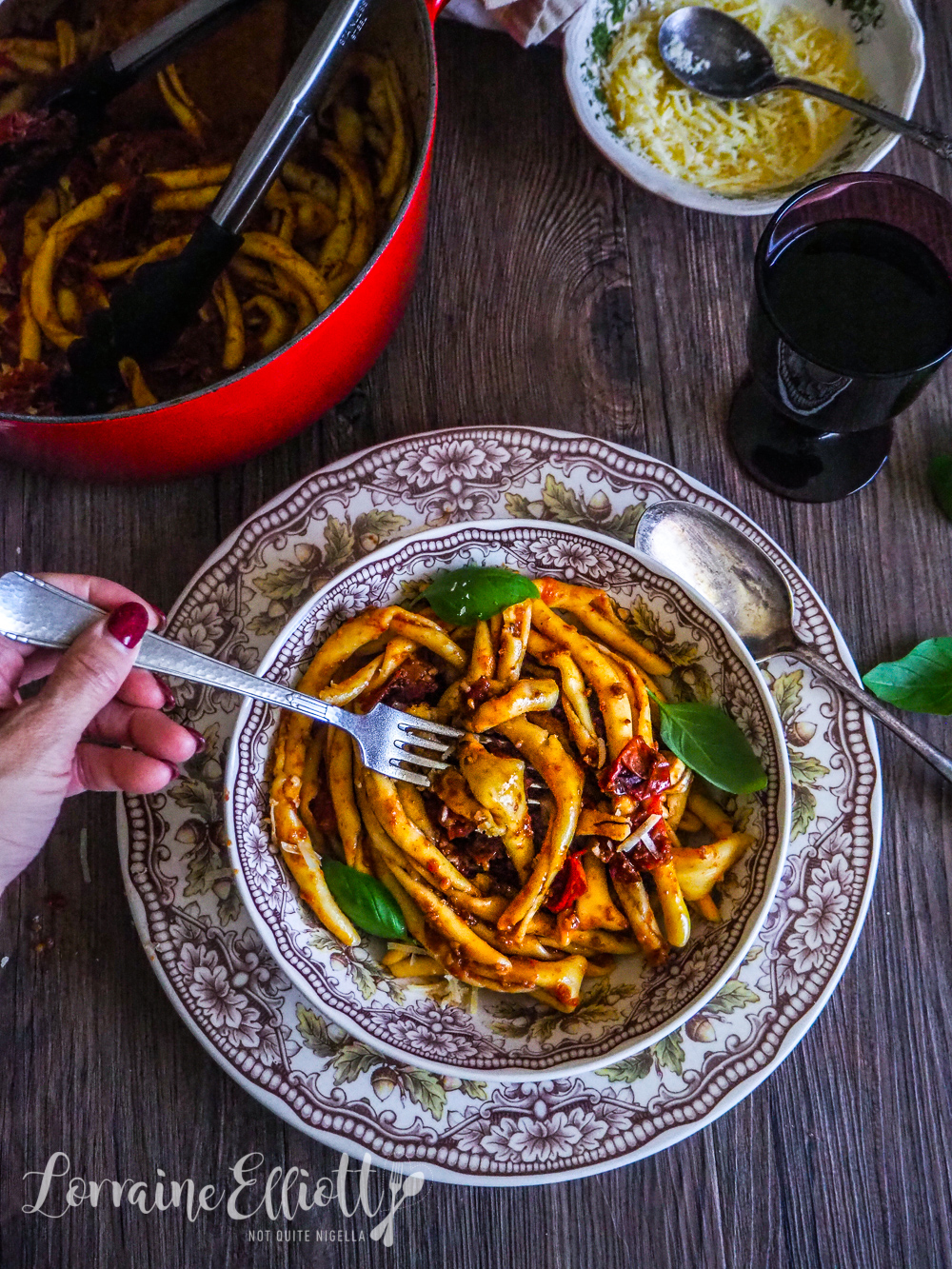 We are really exhausting all of Sydney's best escape rooms and this time we went for one that none of us had tried before. For this room, we were separated into two groups at the start. JY, Ben and I were in one room and Mr NQN, Nina and Garth were in an adjoining room.

We were busy breaking a code on a padlock when suddenly something fell down on my head. It was an exit sign! It hurt like hell and the sharp edge hit me first. There was no bleeding but my head was sore for a week afterwards. We weren't overly surprised. It was a very flimsily put together escape room with things feeling really shoddy.

When Ben mentioned it to them afterwards, the woman said, "Oh that has never happened before," which I thought was a rather odd thing to say. And it turned out that once I read a review on it, it had happened to someone else before who mentioned it in their review! The only thing I could say afterwards was "I hope I wake up with some psychic skills after this!".

So tell me Dear Reader, what extra special skills would you like to have? And do you know exactly what is on your pantry and where it came from? 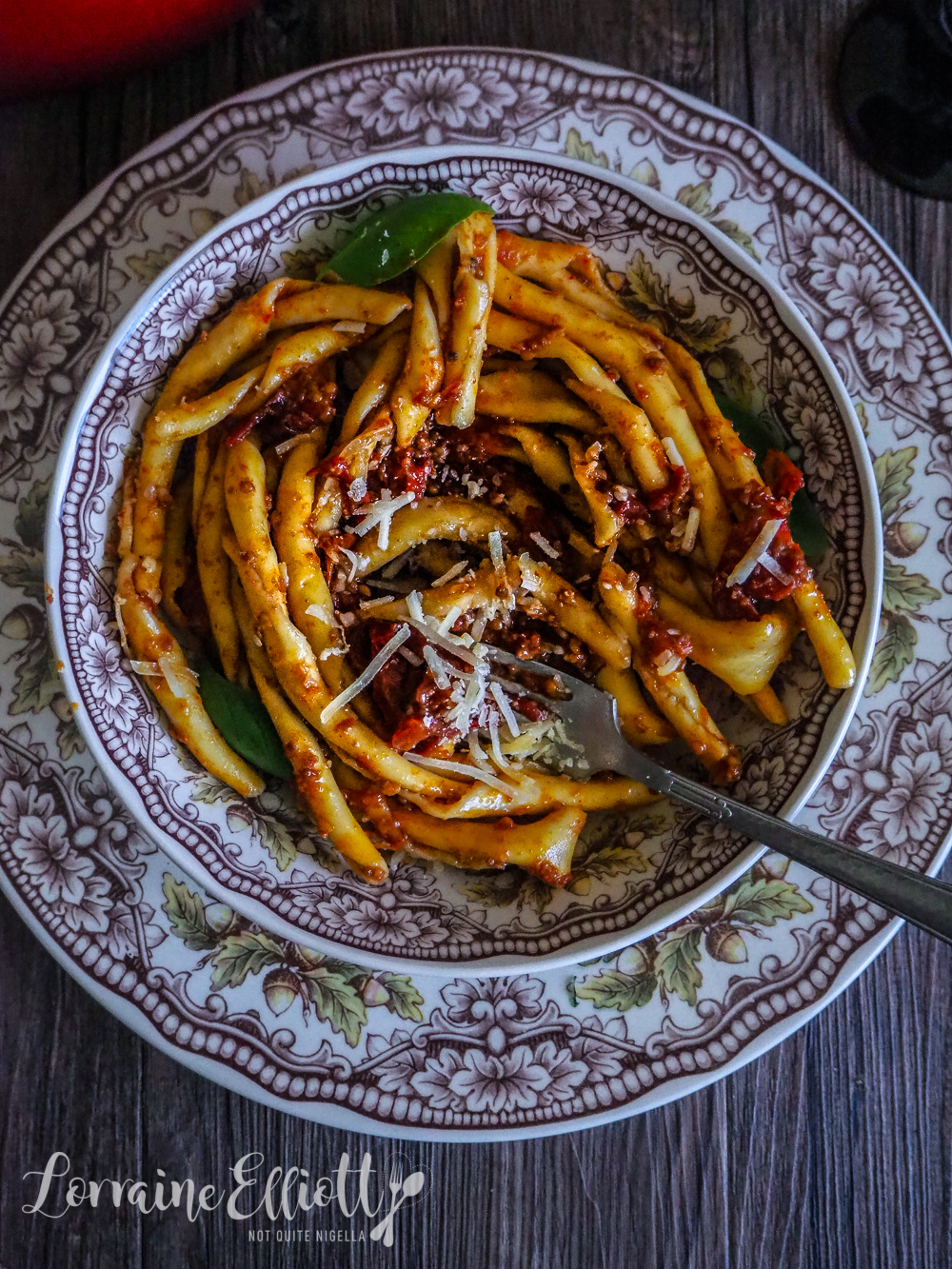 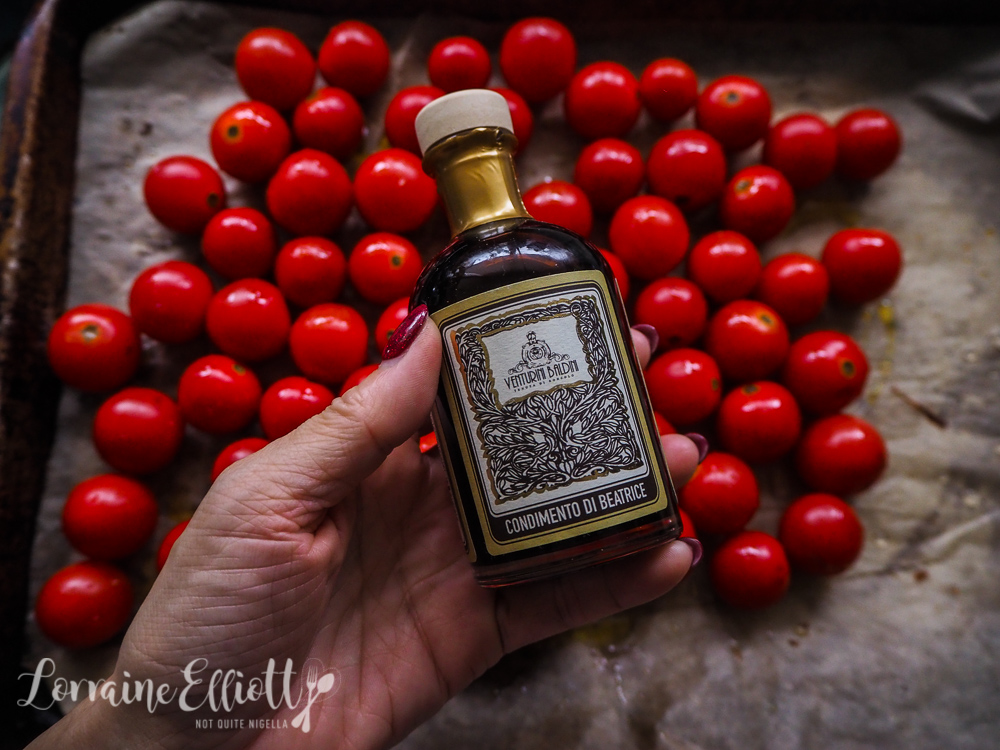 Step 1 - Preheat oven to 200C/400F. Line a tray with parchment and place tomatoes whole and drizzle with olive oil and vincotto. Roast for 25-30 minutes. You can make this ahead of time by 3-4 days and just store with the sliced garlic in an airtight jar until needed. 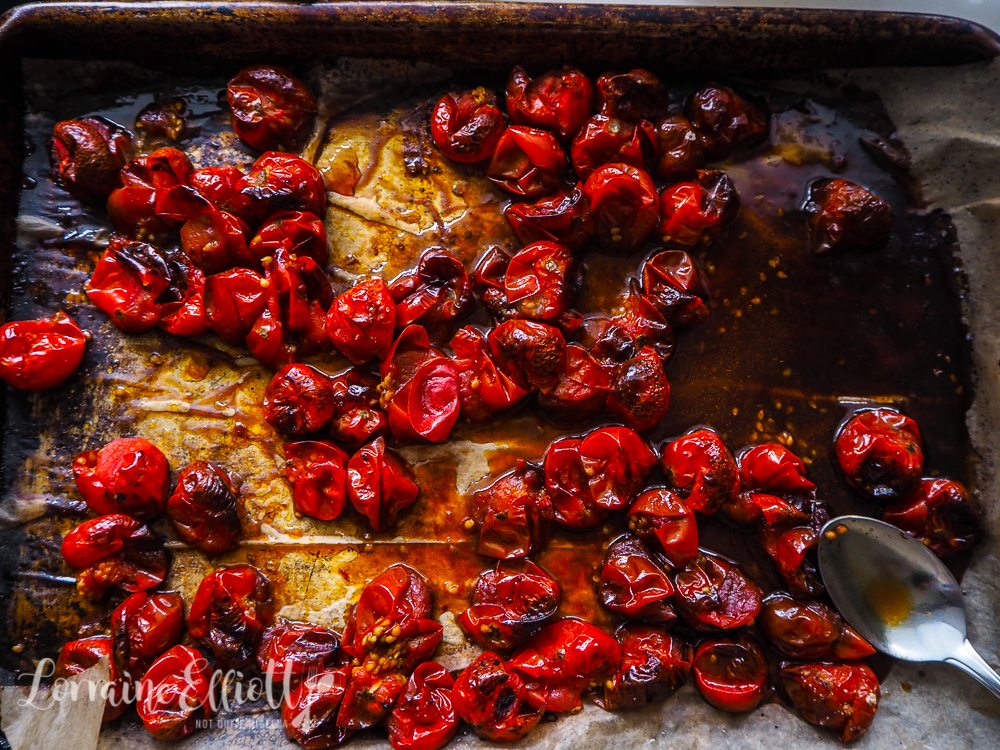 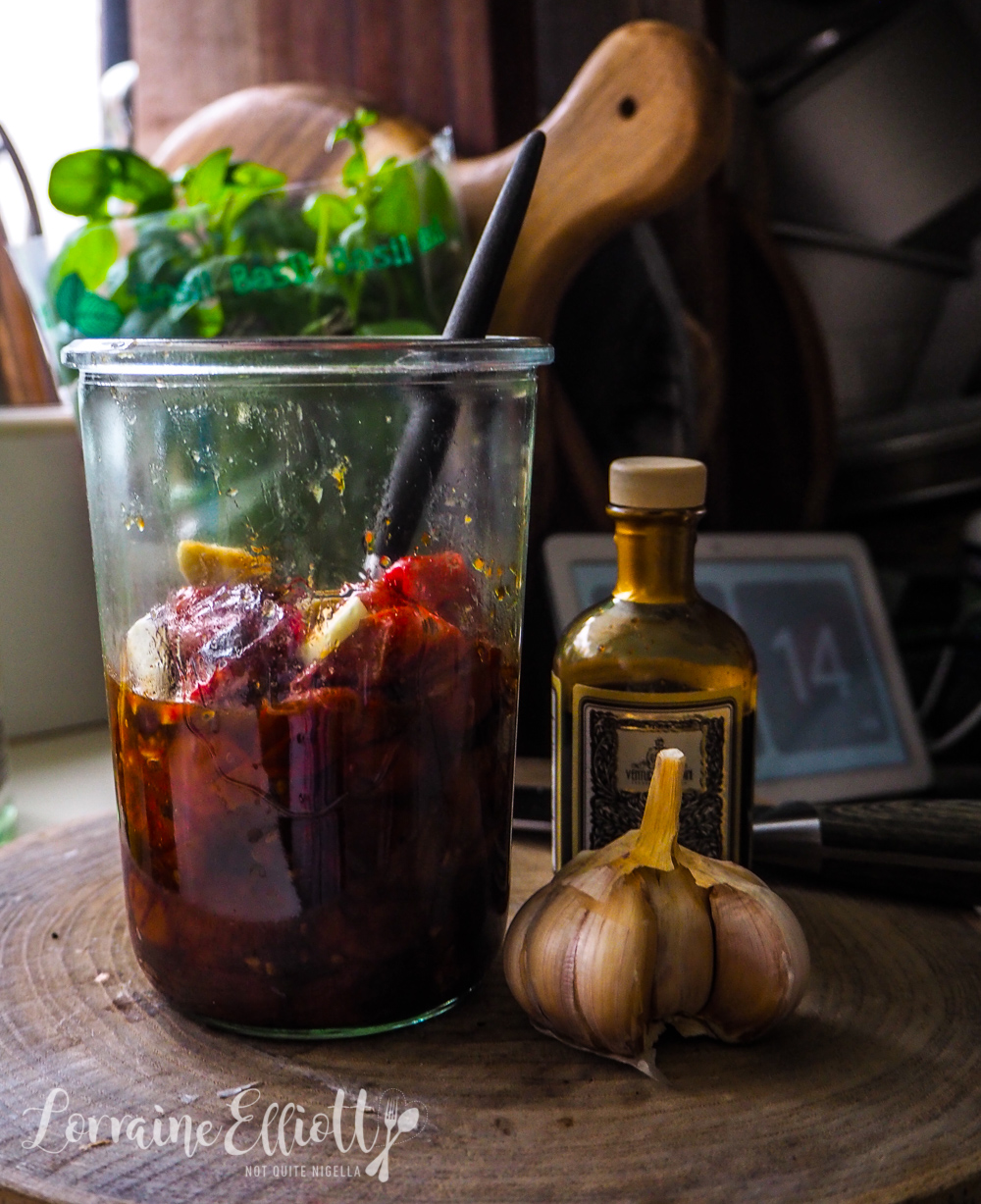 Step 2 - Boil the pasta in a big pot of salted boiling water until al dente. Drain and reserve 2 cups of pasta cooking water. In the same pot place the roasted tomato sauce and nduja and cook until the nduja is cooked through, adding in as much pasta water as needed so that it becomes a thick sauce. Toss the fileja pasta through this and serve with grated pecorino or parmesan cheese. 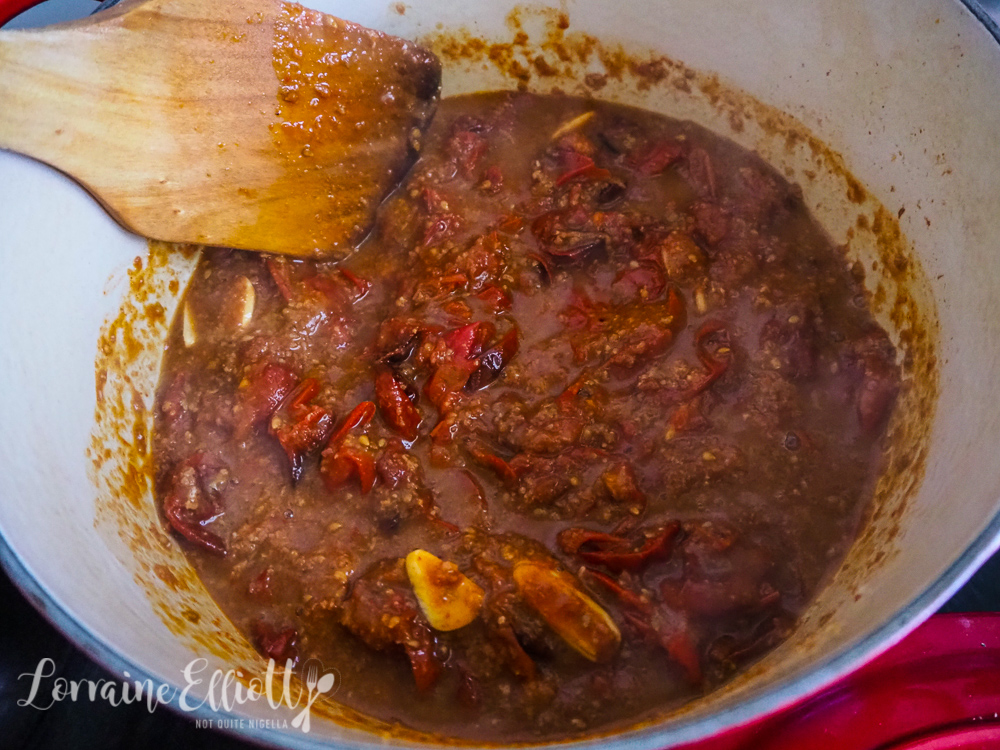 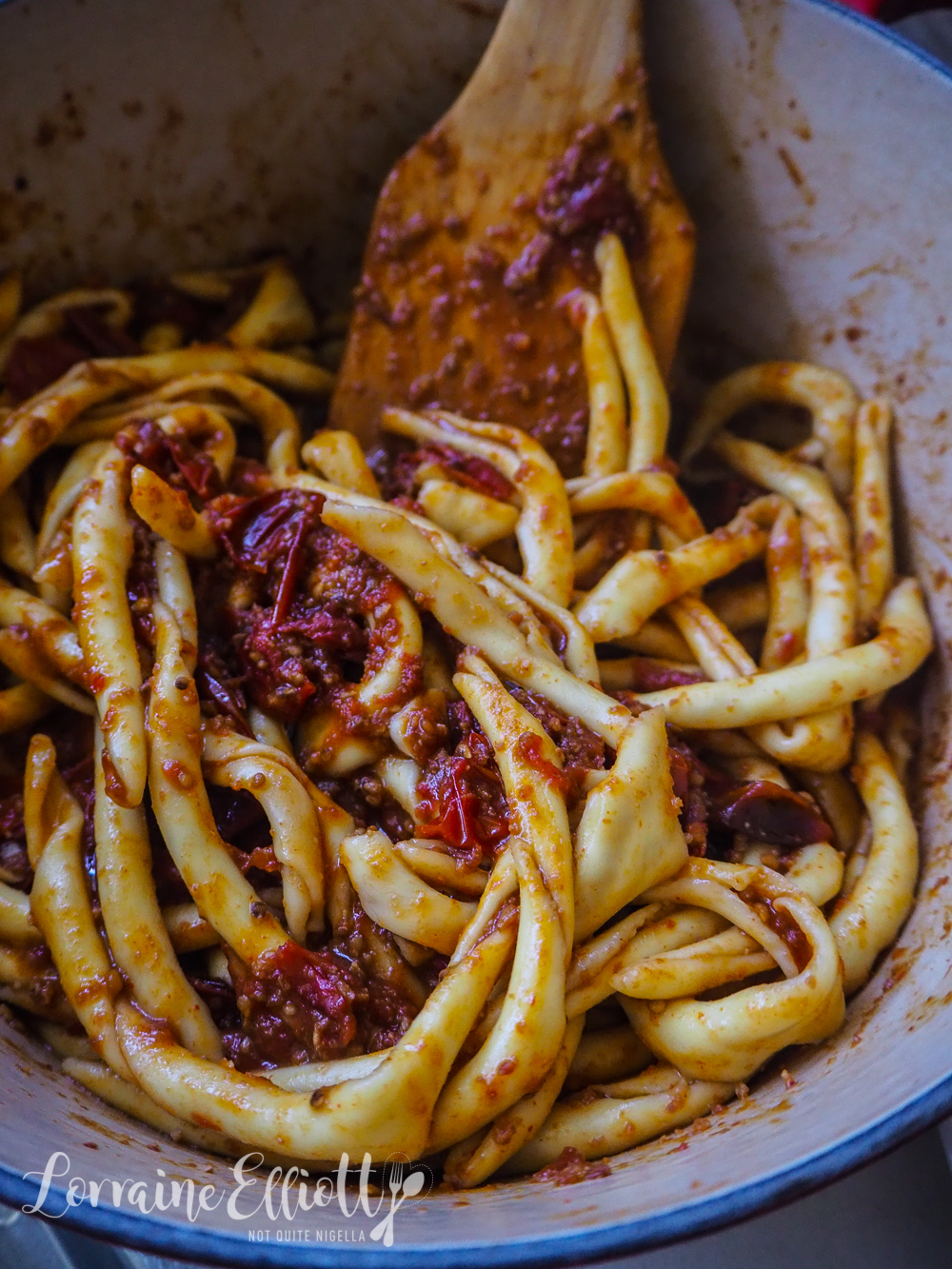 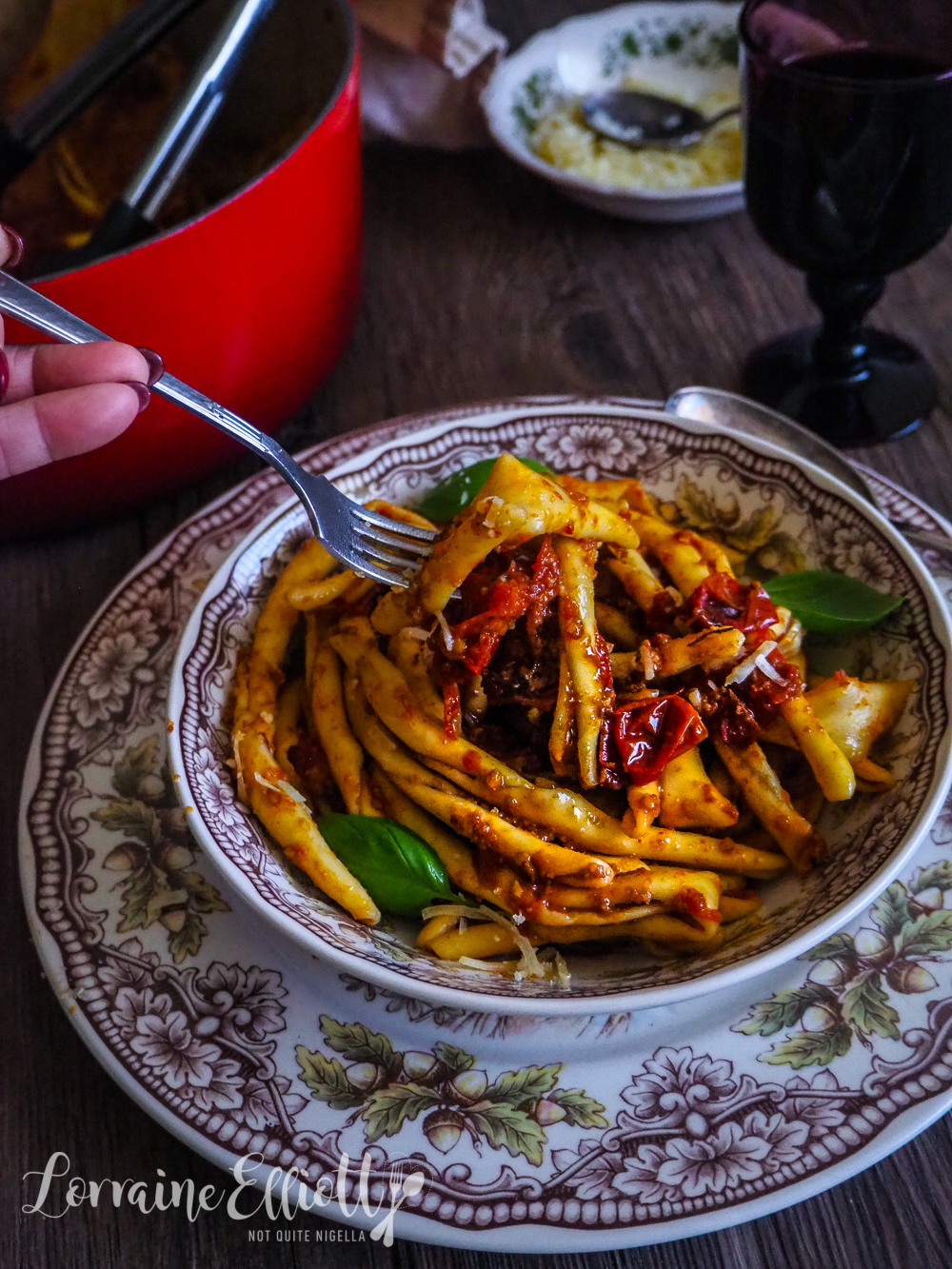