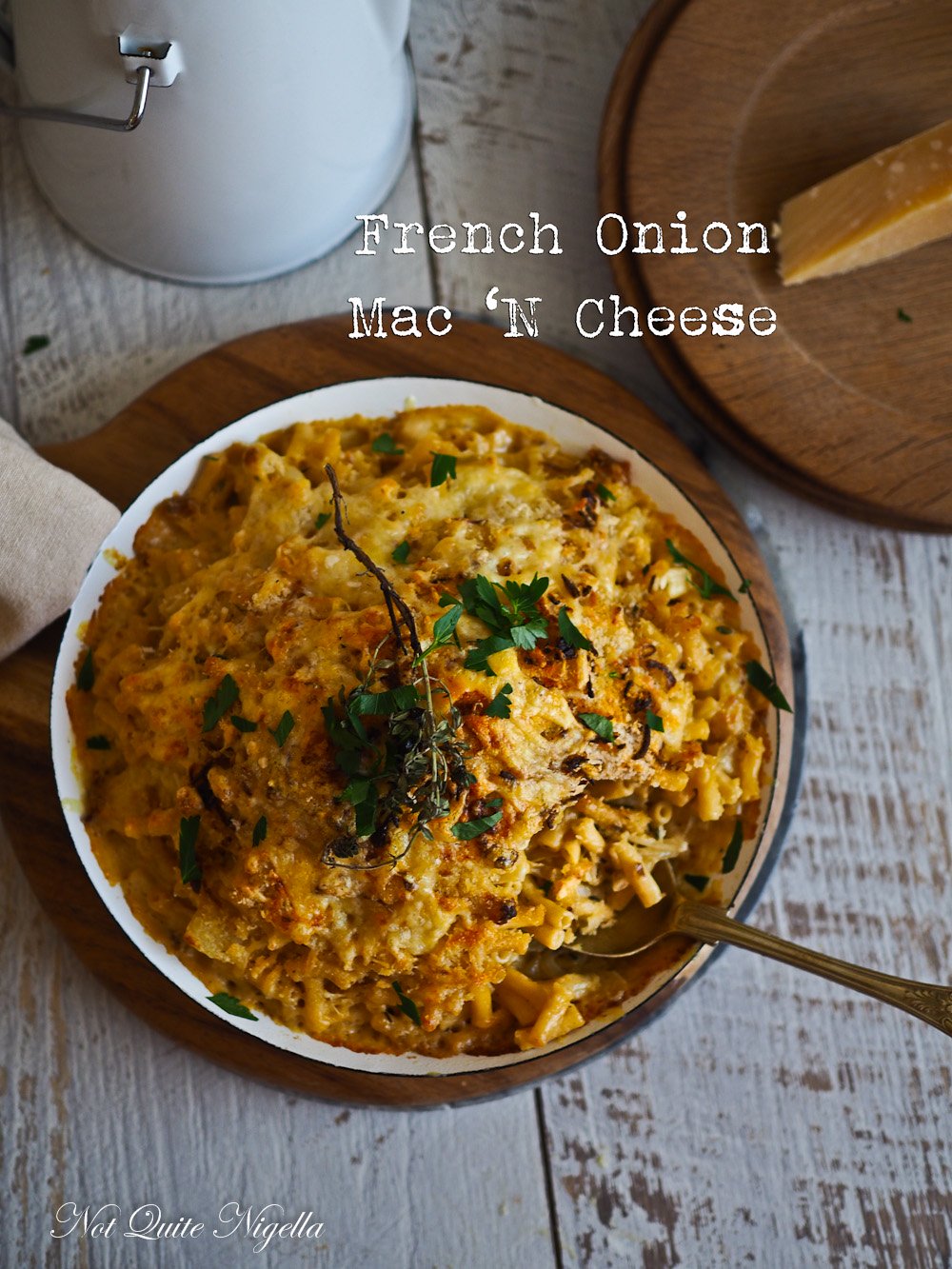 Sometimes I get so excited that I cannot wait to share a recipe with you Dear Reader. And this French Onion mac and cheese is one of them! It starts with softly cooked onions and garlic and then brandy and beef stock is added as well as plenty of cheese to make this a mac and cheese that is hard to stop at one serve. On top are crispy onions and toasted breadcrumbs as well as more cheese - of course!

If you're a mac and cheese fan may I beseech you to make this lovely version. The French onion flavour adds so much to the mac and cheese especially with the generous hit of brandy and fresh herbs. My favourite part is of course the crispy top so feel free to make this in a large rectangular or oval dish for more crispy topping. 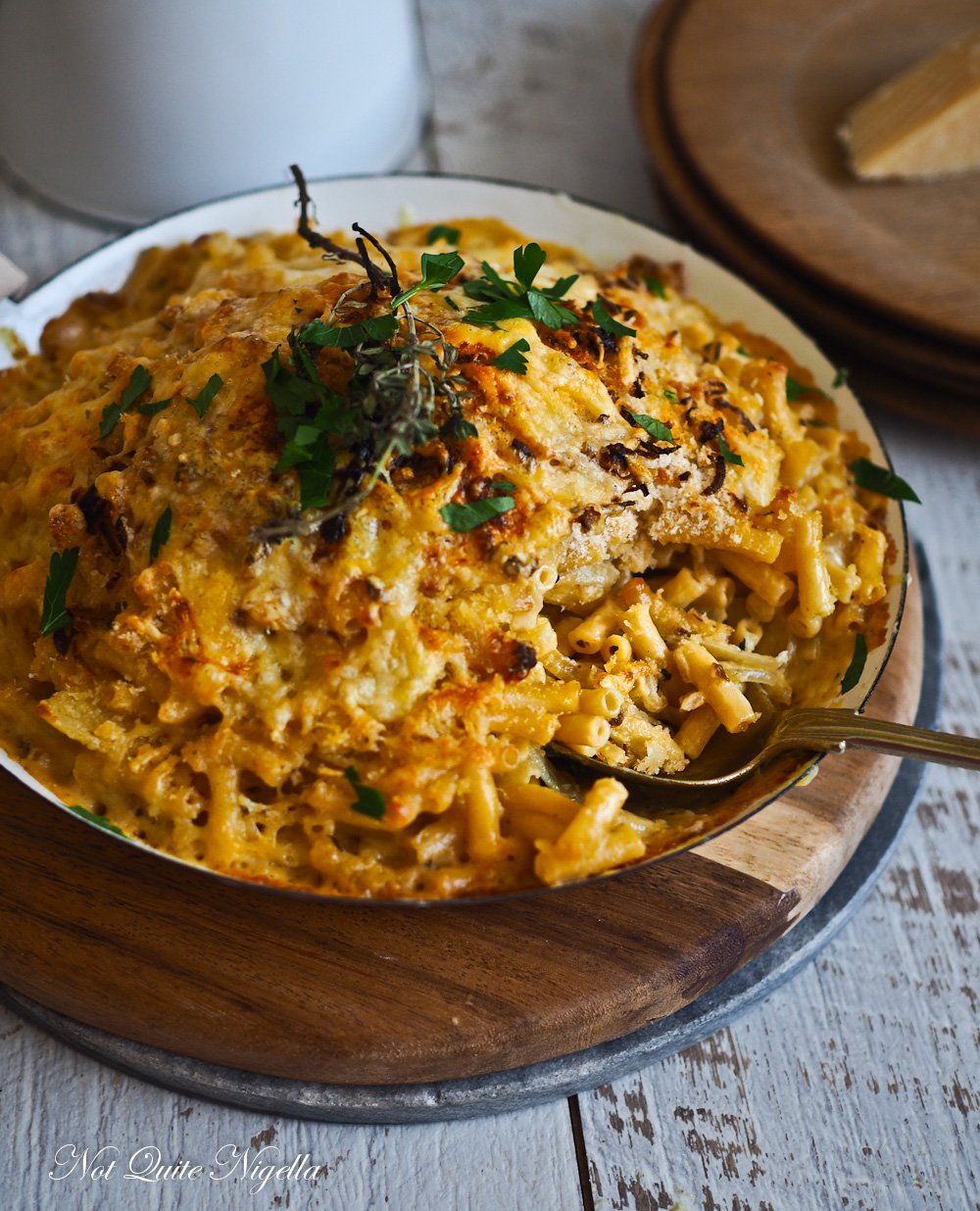 "Is French onion soup actually French?" Mr NQN asked me as we were eating it. "Or is it like French fries?".

"I'm pretty sure it's actually French. I don't know who is claiming French fries but I want to be a citizen of that country," I said.

These are the sorts of oddly boring strange conversations that you tend to have as a couple eating dinner. And then later that night Mr NQN said to me. 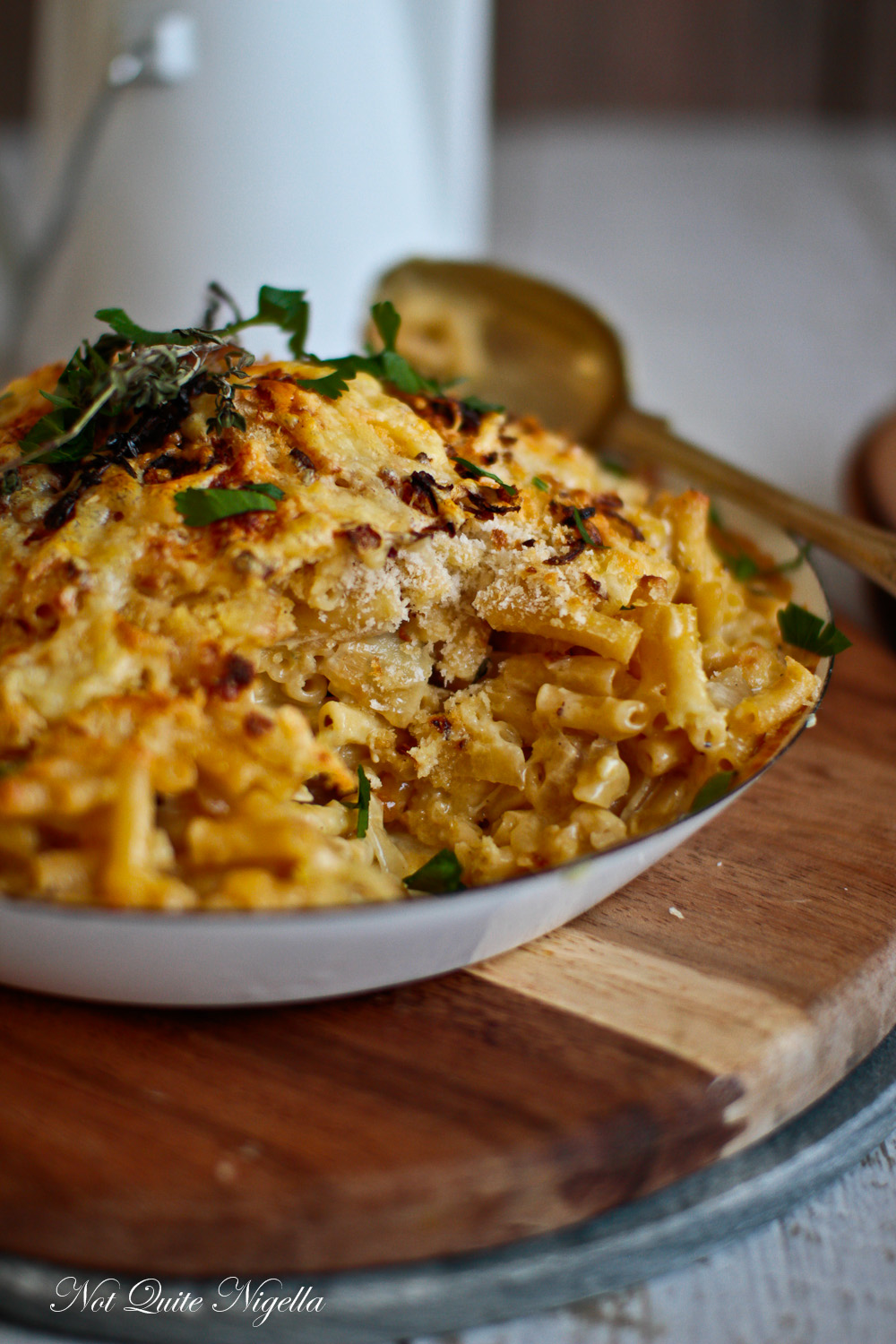 "Oh while you were away Mochi got on really well with another dog, a West Highland Maltese," he said. This was important as Mochi often growls at other dogs trying to guard me. We've been trying to teach her to be more friendly but it hasn't been that successful.

"Hmmm the only dogs she doesn't growl at are white dogs or other Maltese Shihtzus. Do you think... Mochi a white supremacist?" I pondered aloud.

After thinking for a moment Mr NQN said "Yeah..." and exhaled loudly.

"We did not raise her like that!" I said. I looked at my lovely little fluff ball asleep by our side and wondered where we had gone wrong. 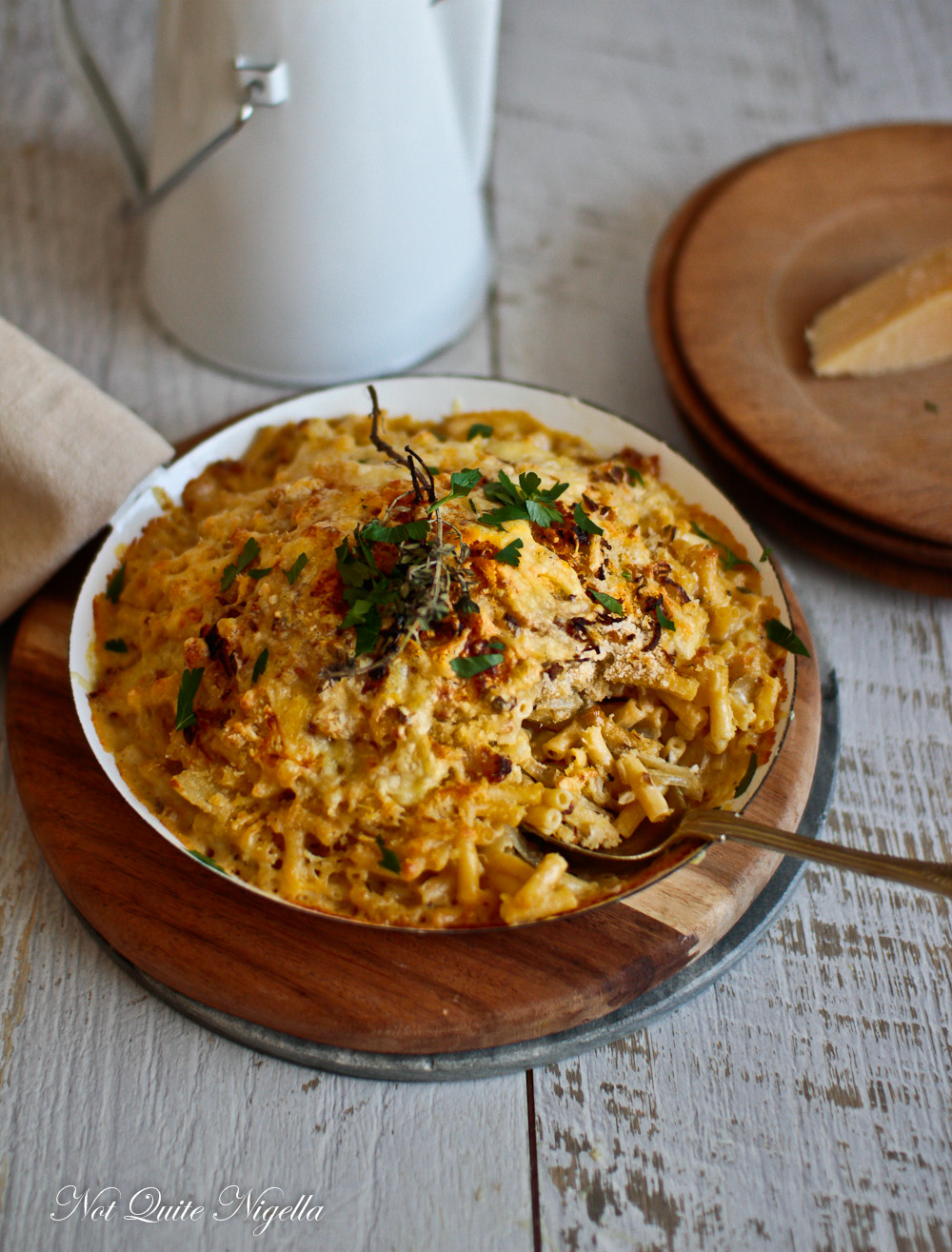 Then the conversation turned to white supremacists who have obviously been in the news lately.

"Do you think white supremacists only like white dogs? What about mixed breed dogs? Is that against their rules?" I asked him. I could tell he wanted to sleep but I had questions. He tried to bring a halt to my white dog/white supremacist questions by telling me a piece of trivia - that it was the Belgians that were said to have invented French fries, not the French! And yes the French had invented French onion soup.

So tell me Dear Reader, do you have strange conversations like these at home? And do you think white supremacists would like white dogs? ;) Never saw myself asking that question...

Fried shallots can be found at Asian grocery stores 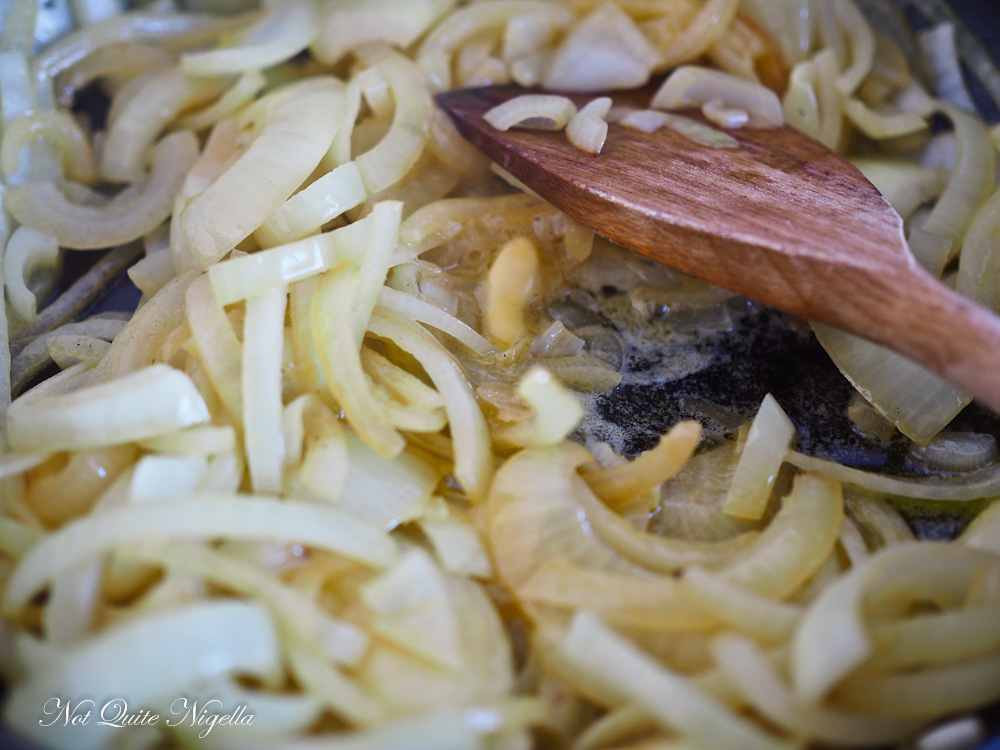 Step 1 - Cook macaroni in plenty of salted, boiling water for 6 minutes. Drain and rinse in cold water. Peel the onions and slice thinly. Add a few cubes of butter into a large frypan and saute the onions with thyme on a low medium heat. Saute until very soft-this will take a while, around 25-30 minutes depending on how thinly you've sliced the onions. Add cubes of butter if needed. Reserve 30g/1oz of the butter to dot on top. Then add the garlic and saute until soft. 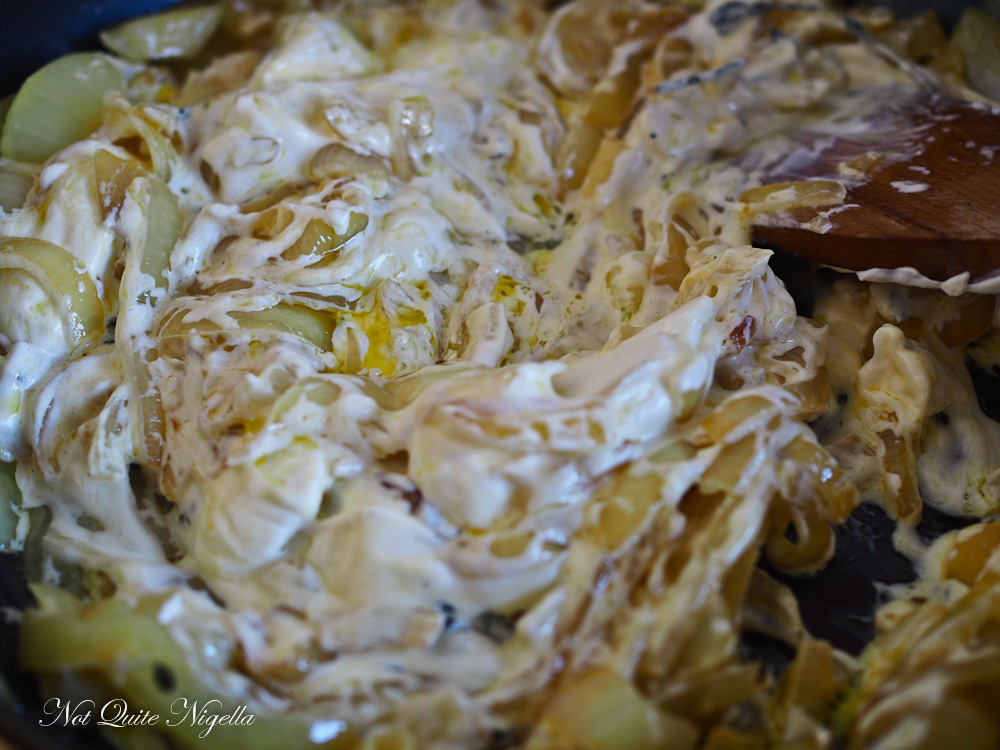 Step 2 - Add the cream cheese to the pan and cook until soft and liquid. Add the beef stock and the brandy and cook on medium heat and add salt and pepper. Mix through 2 cups of the grated cheese and macaroni. 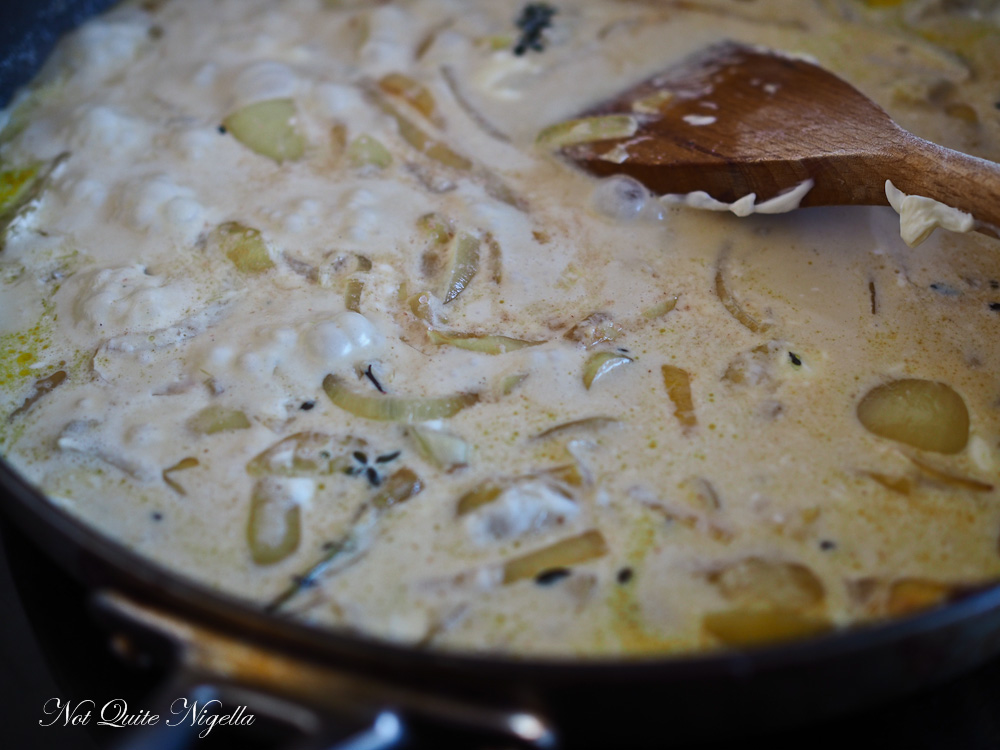 Step 3 - Preheat oven to 200C/400F and spoon the mac and cheese into a oven proof pan and sprinkle with breadcrumbs, fried shallots and the last of the cheese and butter. Bake for 15 minutes and then place under the grill and grill the top. Serve with parsley (this really balances the rich mac and cheese). 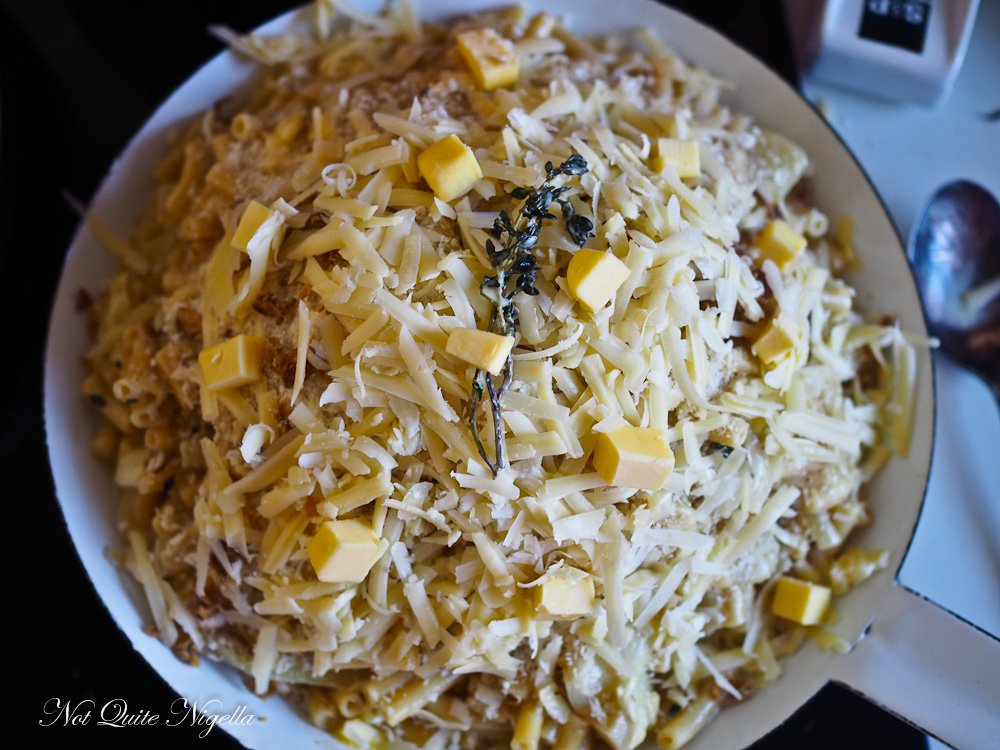