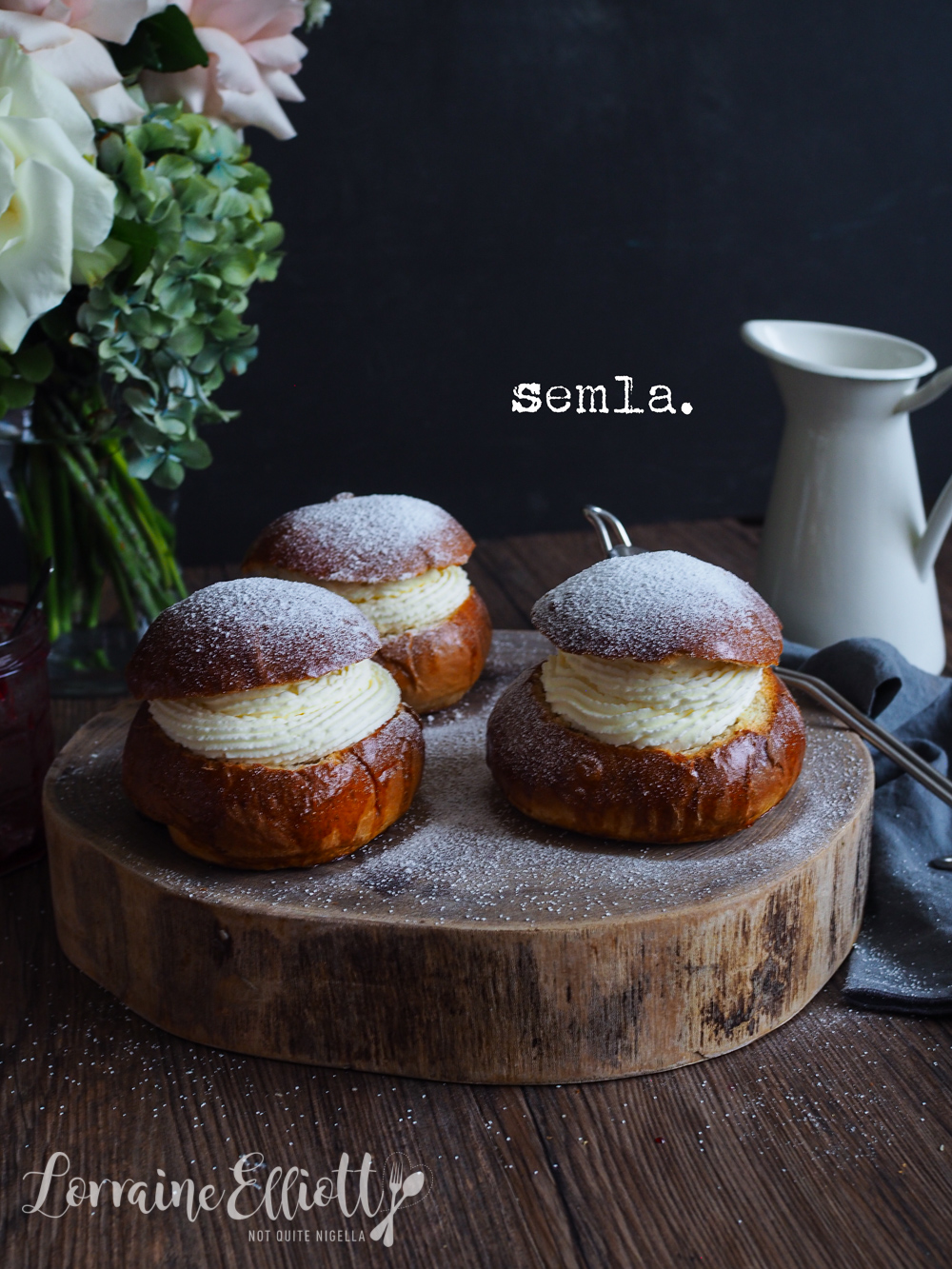 These Semla Scandinavian "Fat Tuesday Roll" buns are pure heaven. A cardamom scented bun is filled with jam and billowy clouds of whipped cream before a final dusting of icing sugar. Never has something so simple been so pleasurable! And it's Semla day today!

Semla (or plural semlor) are a seasonal treat. They are usually part of Lent or Shrove Tuesday celebrations in Scandinavia and versions are also seen in Denmark (made with puff pastry), Iceland (made with choux pastry), Estonia, Norway, Lithuania and Latvia. Like the hot cross bun, shops sell these in December and January up until Easter. 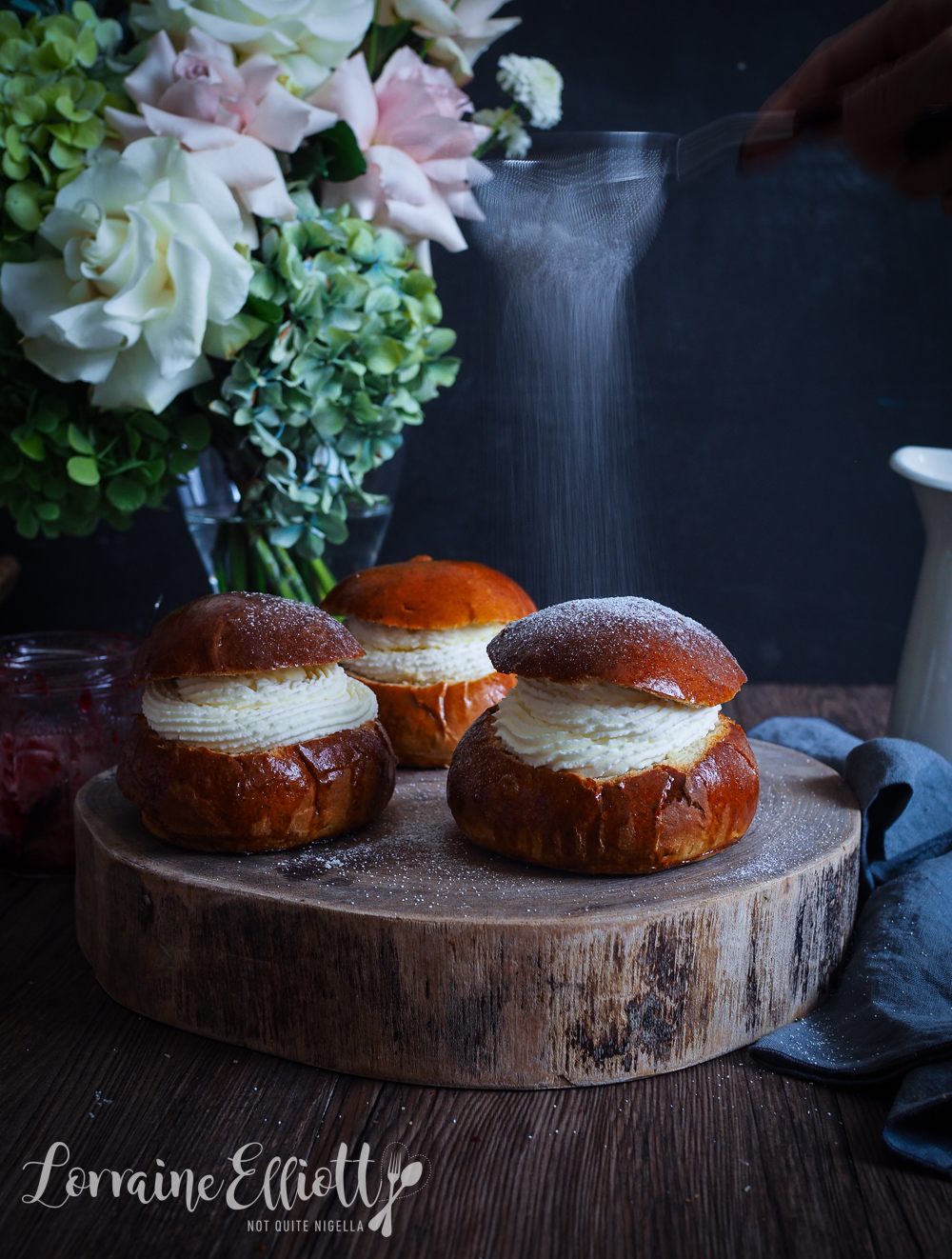 I liked the sound of the Finnish version better with jam and cream because while I don't mind marzipan, jam and cream make much better bedfellows in my opinion but if you prefer marzipan certainly add that instead of jam. Interestingly, the buns are traditionally served in a bowl of warm or hot milk-this would help if the buns aren't fresh and I might be tempted to add some sugar into the milk. But as it was, the only change I made was to use a tangzhong roux mix to make these even softer, fluffier and longer lasting than regular. They are such a wonderful treat and I loved the simplicity of this jam and cream filled bun. I couldn't believe that it was my first time trying one too!

Speaking of trying something new, I was recently staying in a hotel overseas when I switched rooms just to test out a different room type. But in my haste to pack up I realised that I had left my yoga mat in my old room. This was around midnight when it happened and I didn't want to deal with it in the morning as I'm a zombie at best until 11am so I called downstairs. 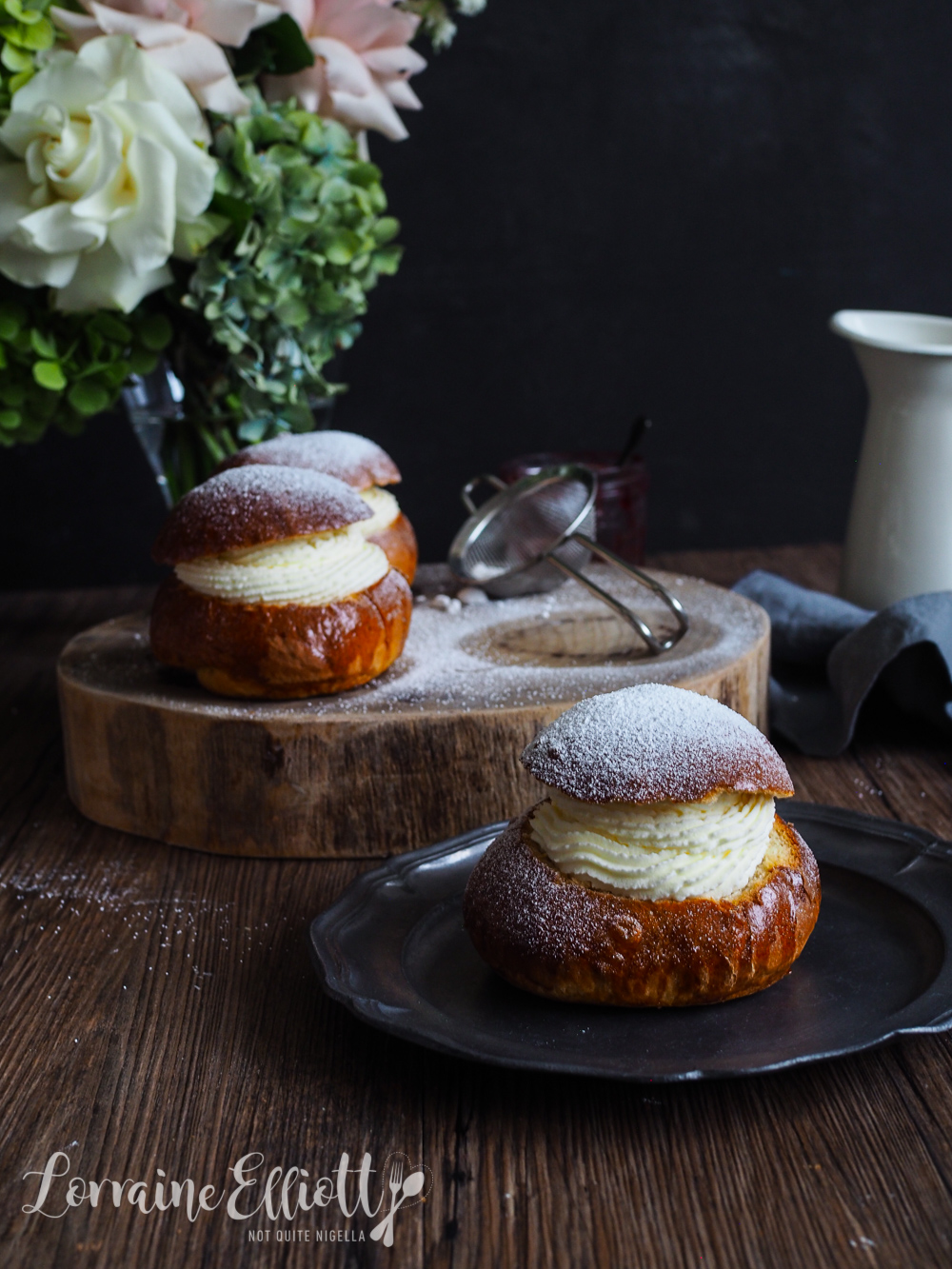 I explained my predicament to them and asked if they could possibly retrieve my yoga mat for me as I needed it first thing in the morning. They told me that they would call me back. And I waited. And waited. Twenty minutes later I decided to call them again. "Miss, we couldn't find it in the room. Do you know where you left it?" they asked.

"I have no idea, maybe room service put it in the cupboard if it's not next to the bed?" I suggested telling them that it was a bright aqua green mat and would have presumably stood out in the room. They assured me that they would go and have a better look and called me back. "Miss, there is nothing there. Would you mind coming to the room with us?" they asked. 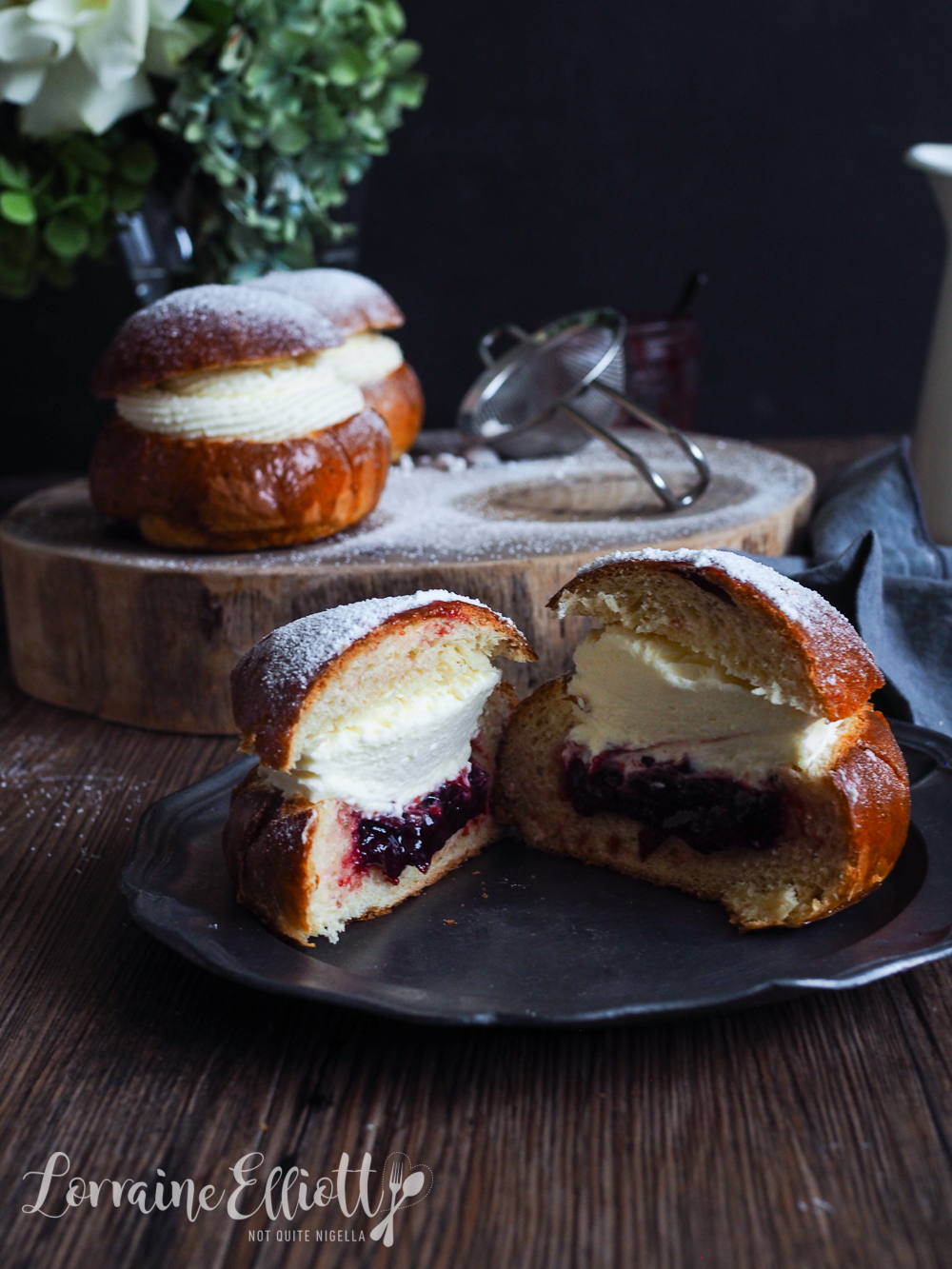 Donning a robe, I followed them into the room. And there it was, my bright aqua yoga mat leaning against the bed. I looked at the man who had brought me there and then he looked at me and started laughing.

"Yoga mat!! We thought you were looking for your YOGURT!" he said giggling, "We looked in the fridge and couldn't find it!!"

So tell me Dear Reader, are you more alert late at night or early in the morning? Have you ever had a similar misunderstanding? And have you ever tried Semla? 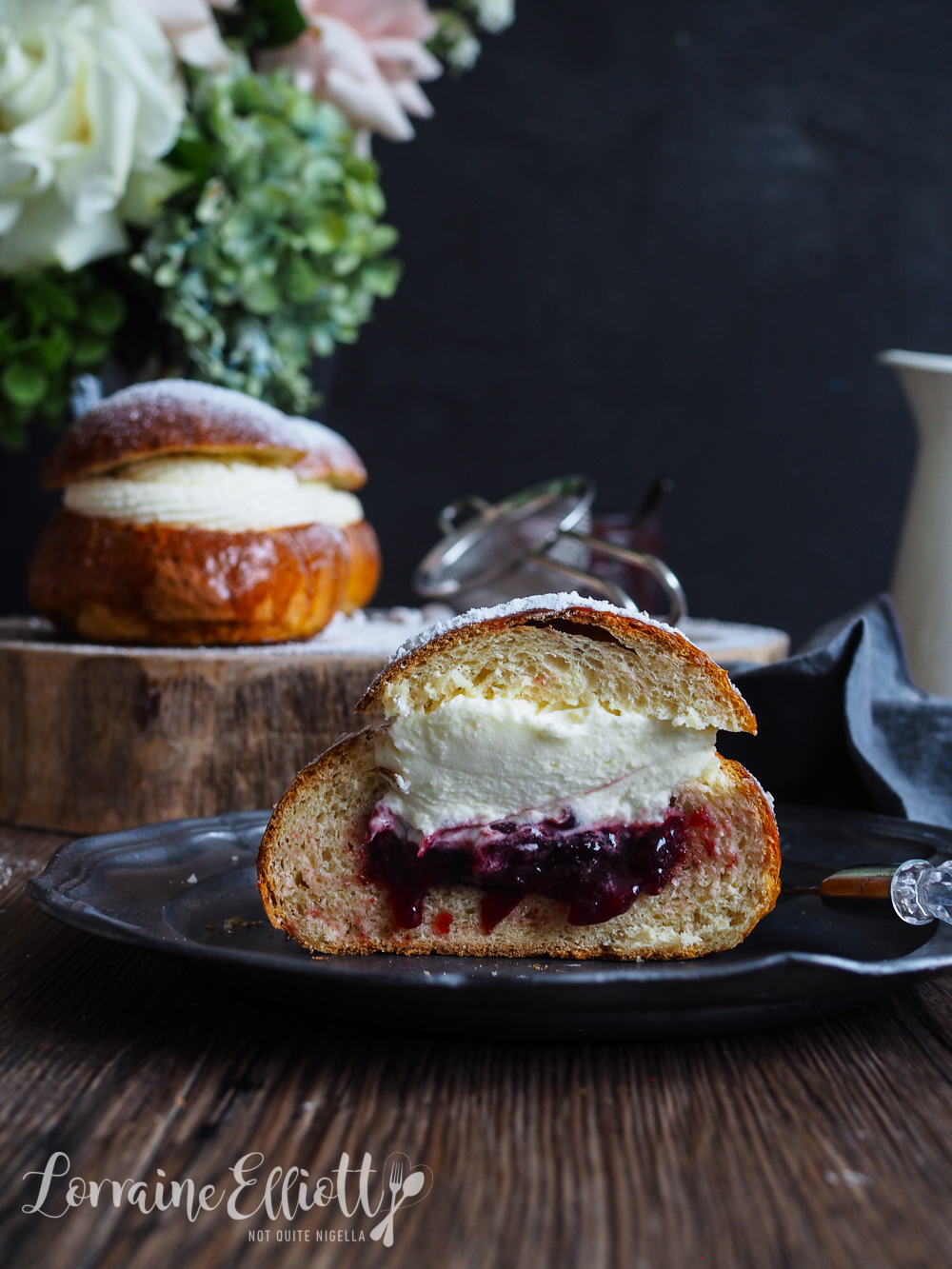 Step 1 - Make the tangzhong mixture first. Take 2 tablespoons of a cup of the total flour and add to a small saucepan. Whisk in the 1/4 cup milk until smooth. Then heat to 65C/149F. Remove from heat, cool down to 45C/113F and then whisk in the egg and honey.

Step 2 - In the bowl of a mixer fitted with a dough hook (this requires a lot of kneading so I don't recommend doing it by hand), mix the flour, yeast and cardamom. Add in the tangzhong mixture and mix to combine. Then start kneading on the lowest speed. Knead until it becomes a cohesive dough, then add the dots of butter. Knead until it becomes very stretchy and elastic and you can pull the dough apart without it breaking (the window pane effect). 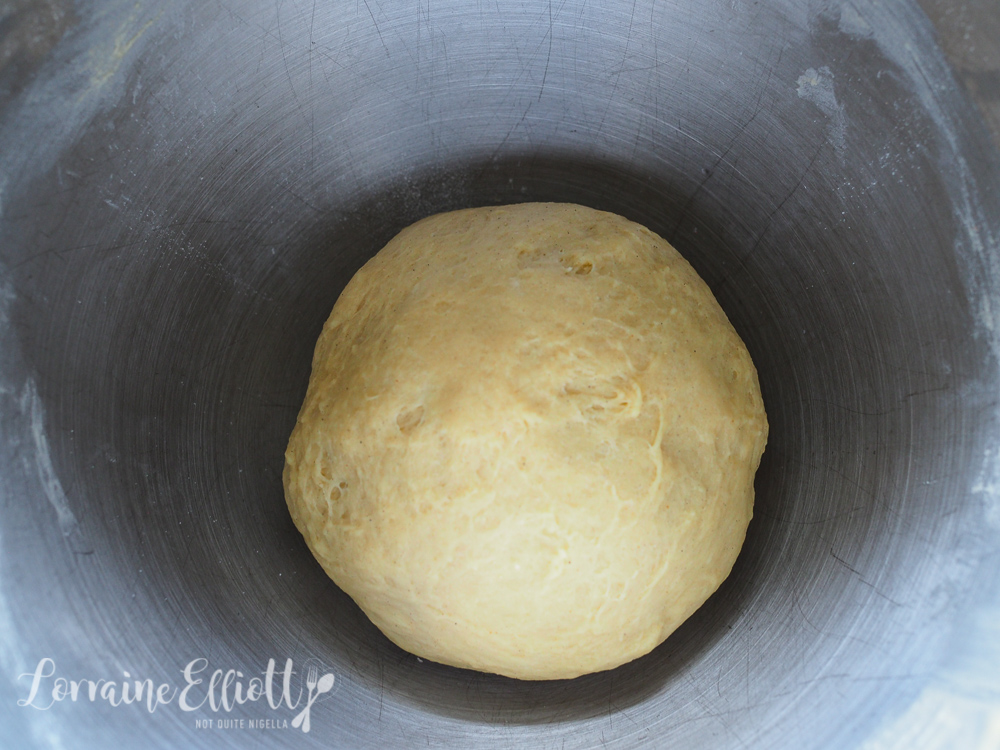 Step 3 - Shape into a ball with a smooth surface, cover and place in a warm, draught free area. I put it in a bowl of hot water to help it along. Allow to rise to double in size for an hour. Punch down the dough and knead in the salt and then divide into six even portions. Make sure that the balls don't have any cracks on the surface or lines that is, keep rolling them until they are smooth on all sides. 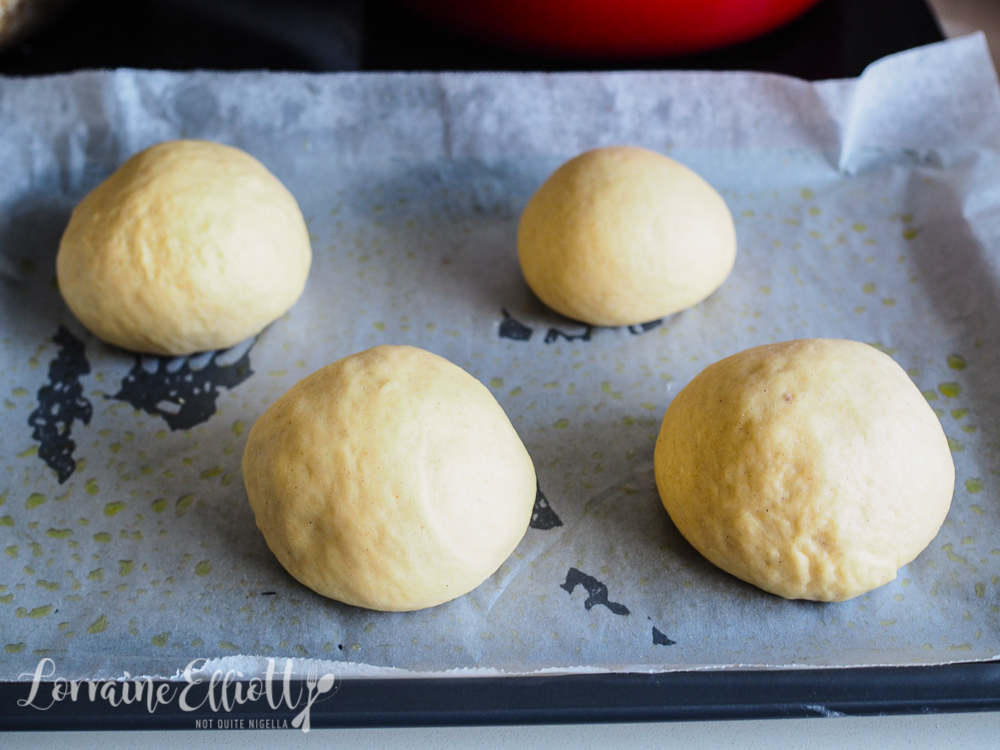 Step 4 - Place in a warm area for the second proofing-around 20 minutes. 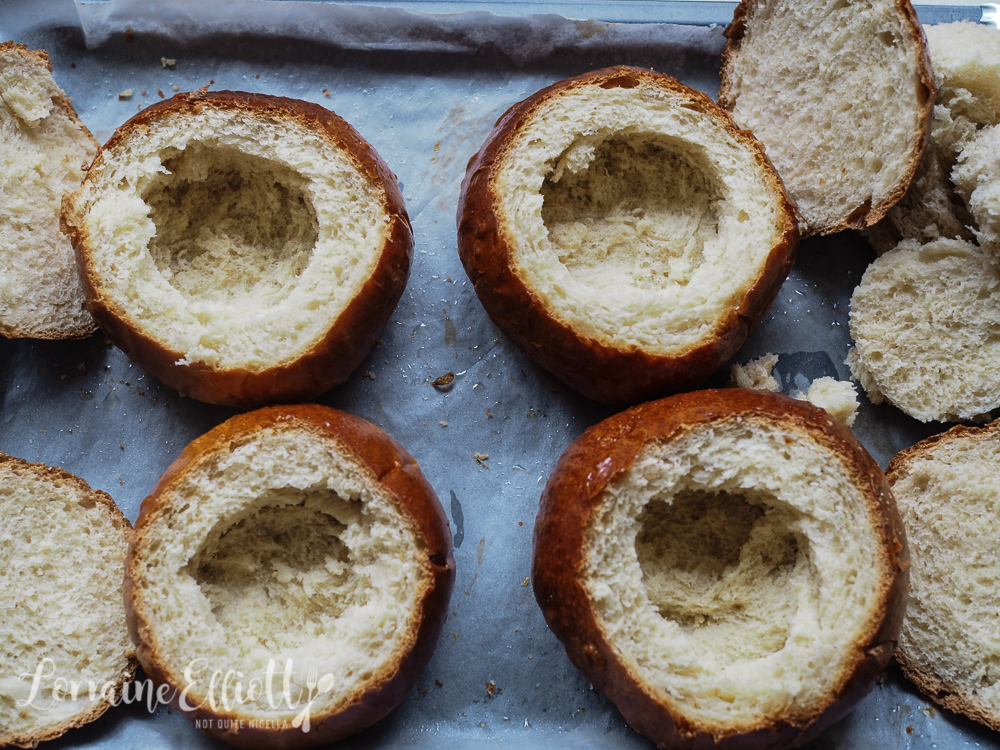 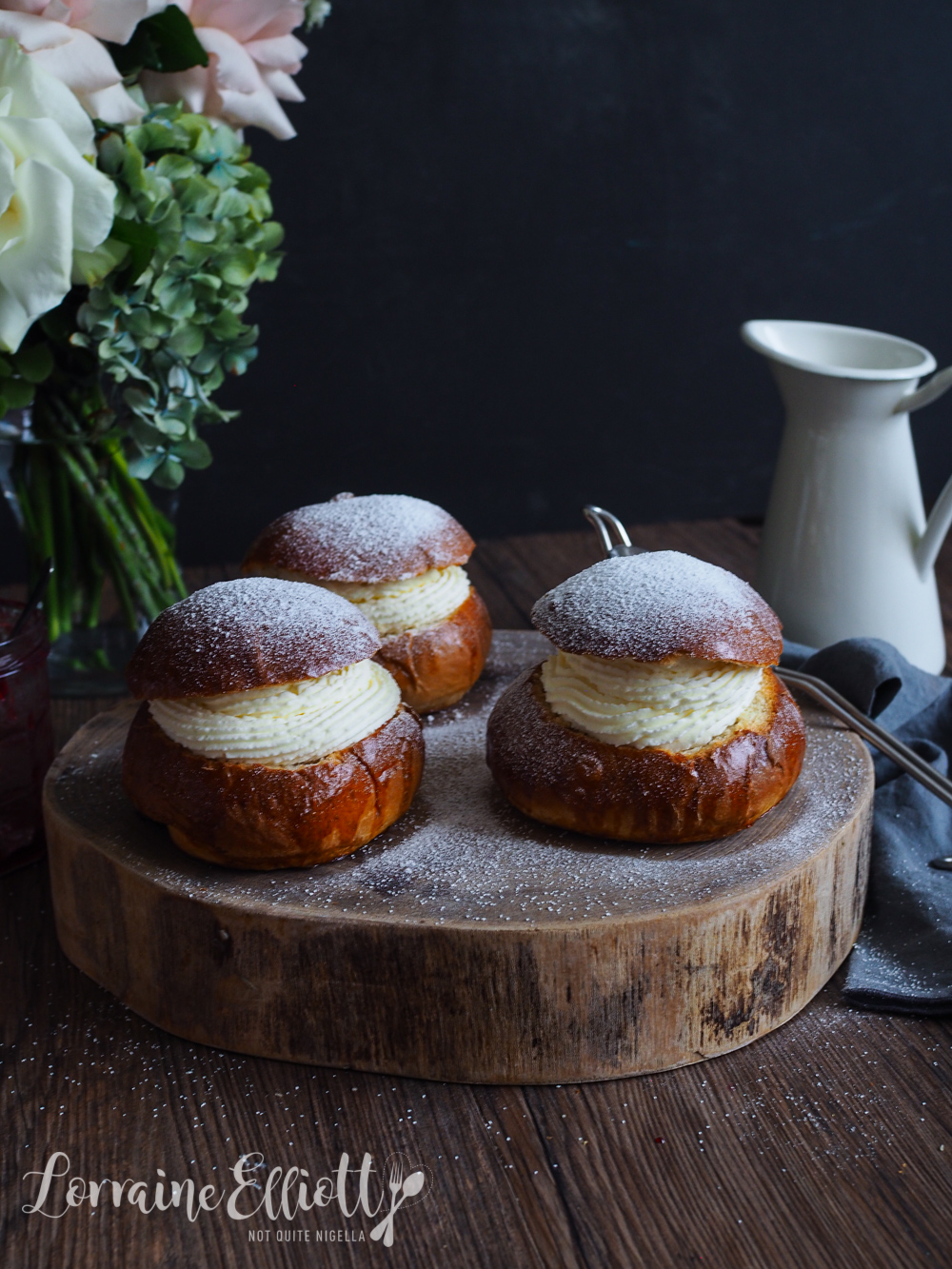 Step 5 - Whip the cream with the vanilla sugar and place in a piping bag. Fill each bun with jam and then pipe whipped cream on top. Place the top on each bun and then sprinkle with icing sugar.