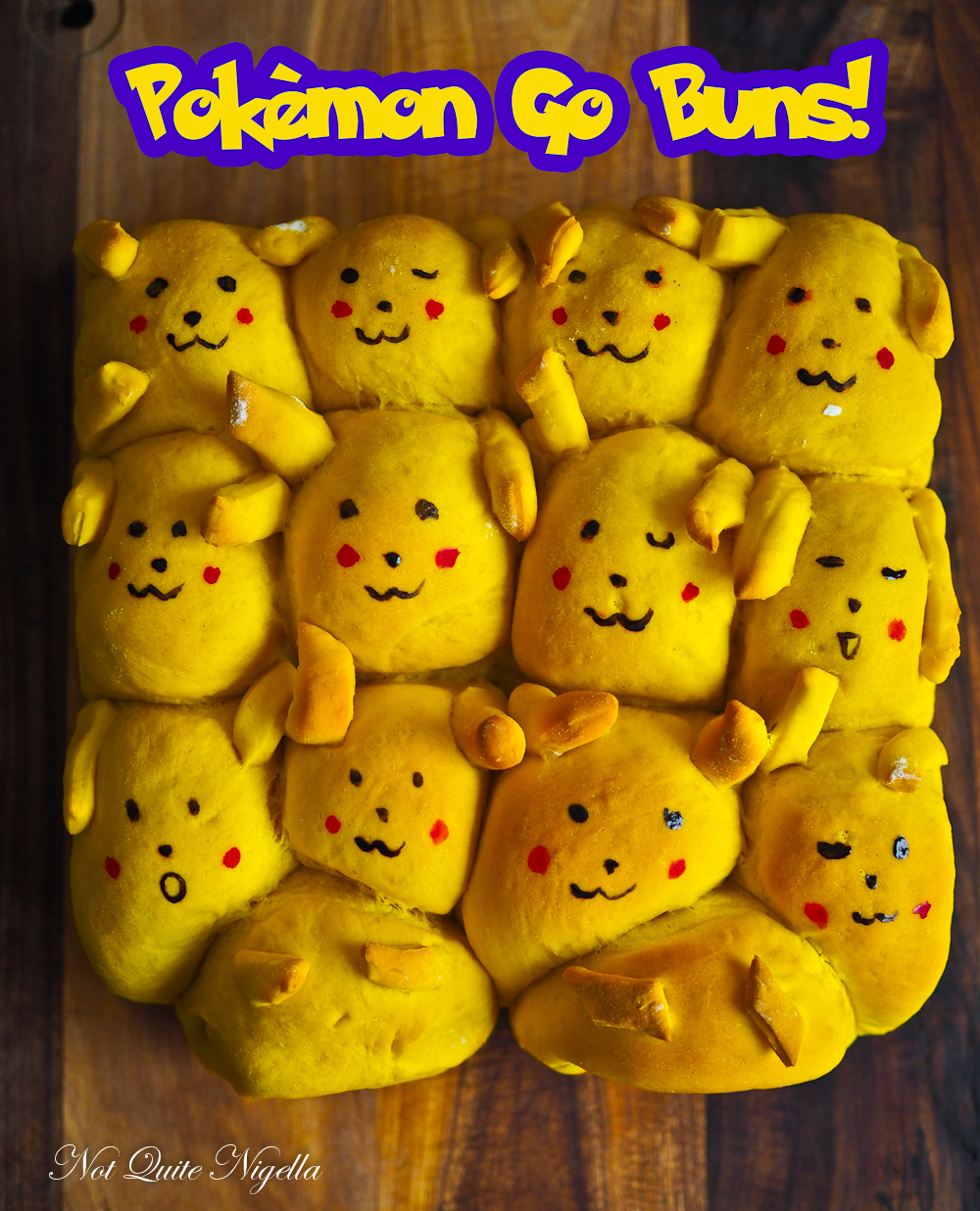 Are you right into the Pokemon Go craze? Are you one of the groups of people that wander the streets looking to capture rare or elusive Pokemons? Surely such activity requires sustenance and these adorable little Pokemon Go Pikachu buns filled with a sweet or savoury filling are the perfect snack!

Mr NQN as expected is very much into these games. You know how some people are early adopters of technology? That's him. If I ask him about anything tech related, he will be totally across it. I'm a bit more resistant, sidling up to a new app or tool with a touch of nervousness. But not him, he'll try anything. 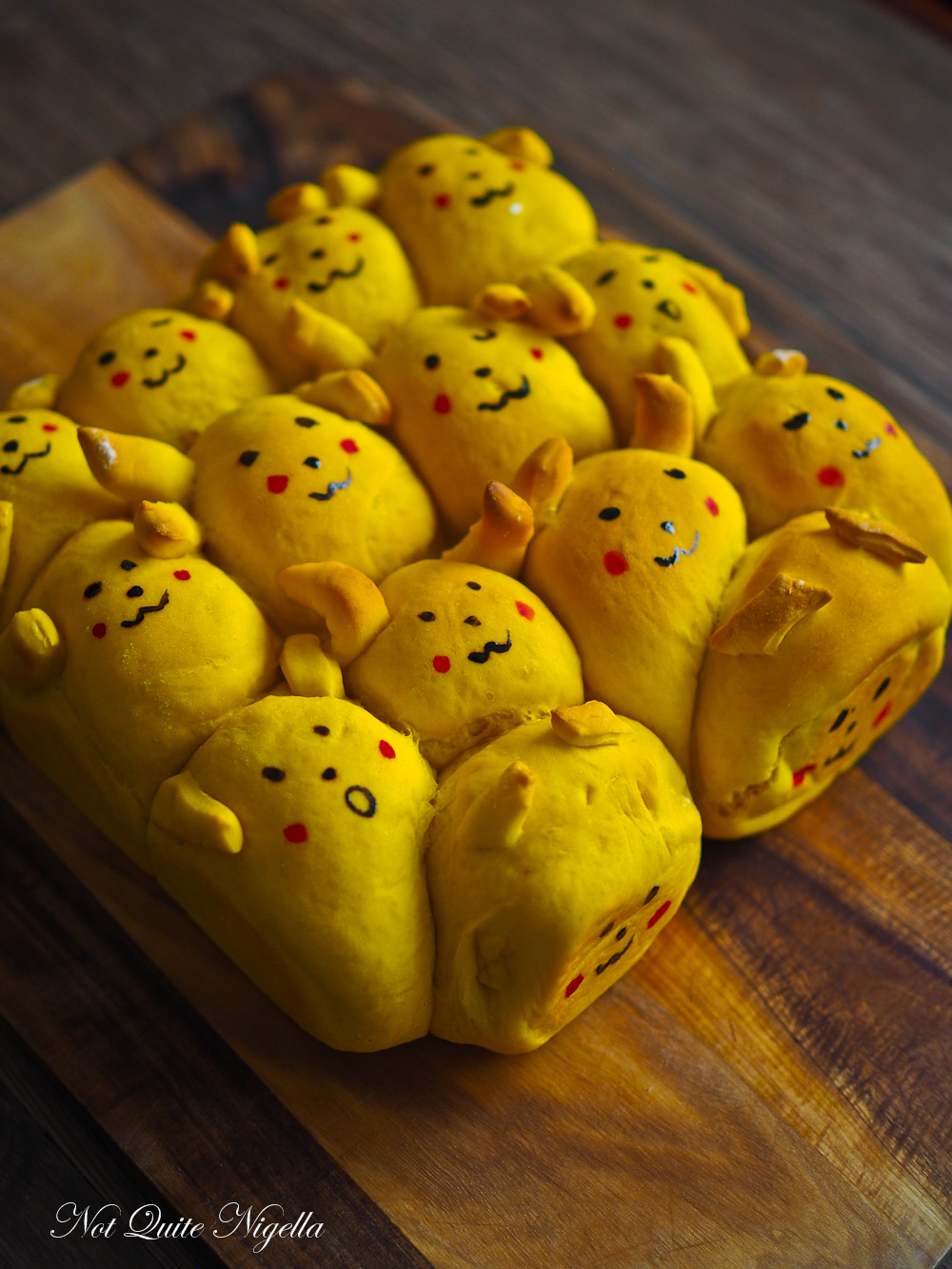 These Pokemon Go buns were his suggestion. Mainly because chasing Pokemons is hungry work and he thought that other people might like a pocket sized snack to take on their adventures. I wasn't sure how they would go but I wanted to do some cluster buns that you could fill with either Nutella, peanut butter a pizza filling depending on your taste. I made the buns honey flavoured so they could go either way and I was surprised at how easily they came together. I dubbed these the "You've got nothing to lose buns" because I didn't hold much hope for them. But they ended up being really easy, rather cute and deliciously soft to boot. I know they don't look perfect but it's a bit difficult to control bread at times. Sometimes it rises and puffs up too much. 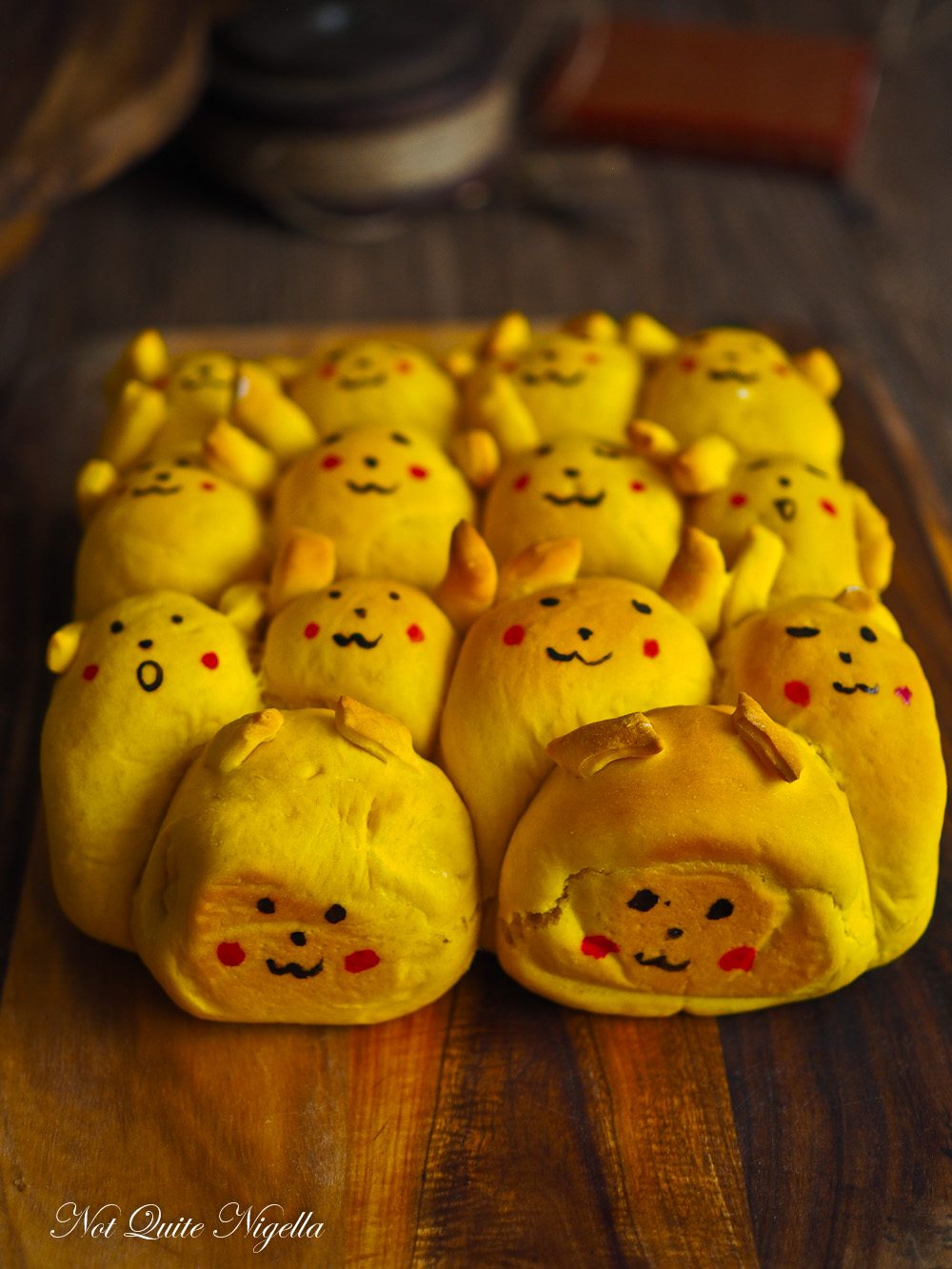 Something else that I've been working on for the last few years is my driving. I haven't written much about it but it has been going smoothly. No accidents and no lost points touch wood and only one parking ticket. I do have one rather strange thing that I do when I drive.

You see I prefer to drive barefoot. I think it's because I learned to drive during summer and during summer you tend to wear thongs (flip flops haha I should clarify for those readers in America). And you're not allowed to wear thongs when you drive because they can get stuck under the brakes or accelerator. I told people on Snapchat about this and the North Americans said that driving barefoot was illegal. But for Australians apparently it is legal (in NSW and Victoria as far as I know). It is often recommended instead of high heels or thongs. So every time I drive up to a place I take a few minutes to put on my shoes. It's not the most elegant entrance but I'm working on that ;)

So tell me Dear Reader, are you an early adopter of technology? Are you having fun playing Pokemon Go? And how about driving barefoot? This is apparently a huge area of contention on driving websites! 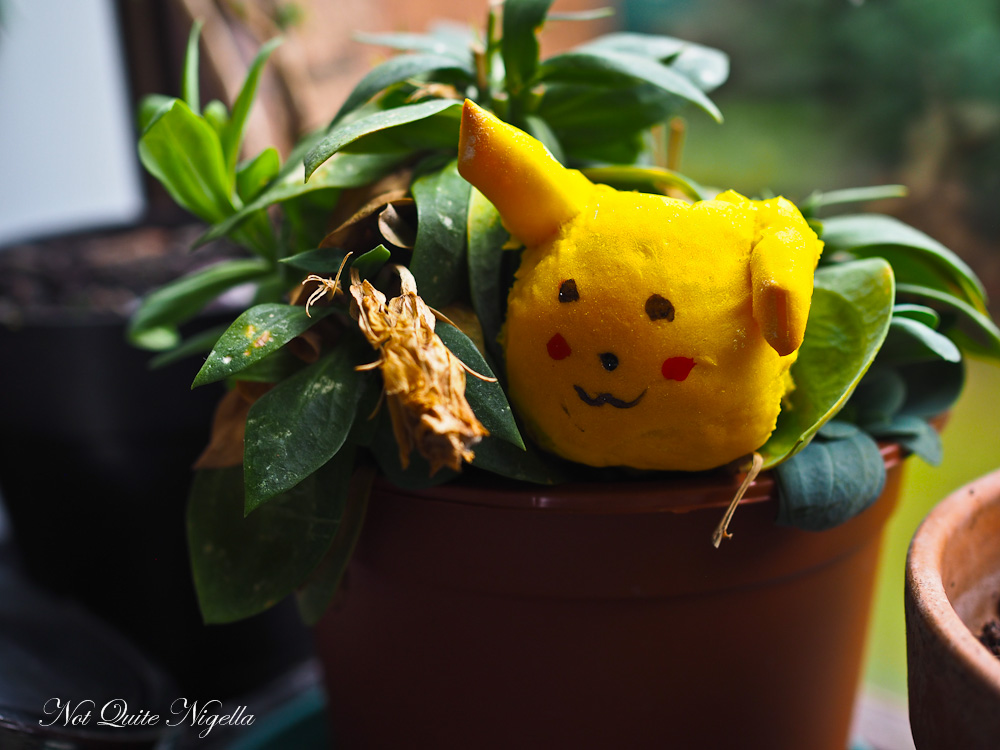 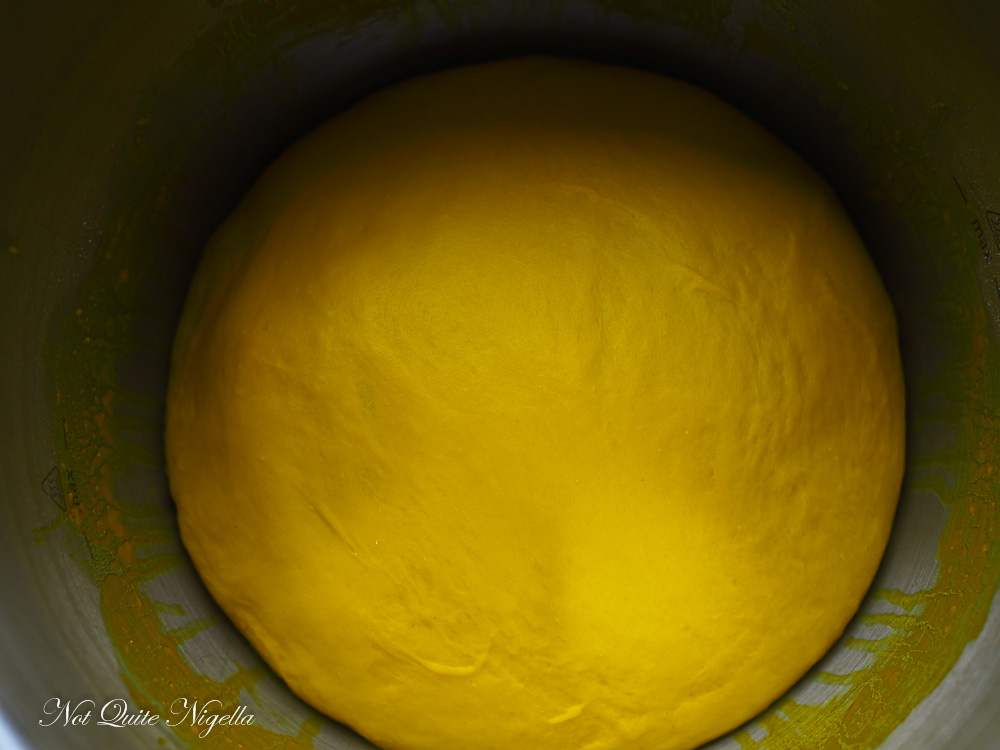 You need the dough bright yellow

Step 1 - Mix the flour and yeast together. Add the yellow colouring into the water and mix in with the flour and knead. After a minute add the honey and oil and keep kneading until elastic in texture. Place in a bowl and cover with cling film and place in a warm area and allow to double in size. I set it above a bowl of hot water and changed the water 3 times once the water got cold. 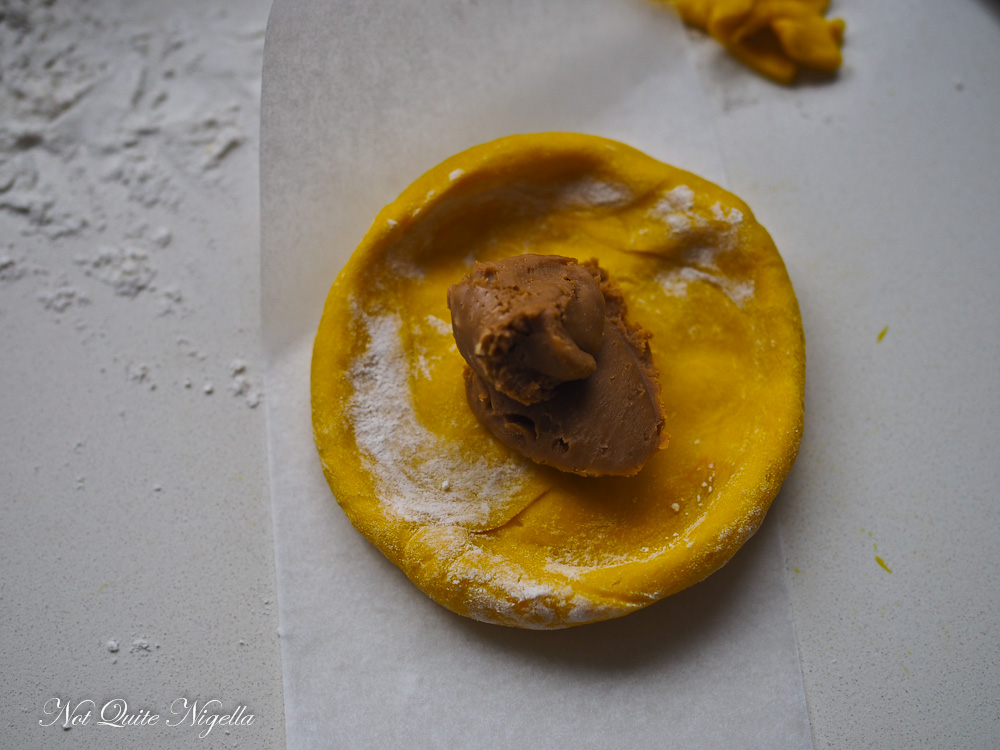 Step 2 - Line a 20x20cm/8x8inch square tin with high sides (if you don't have a tin with high sides, then add two layers of brown paper going about 10cms/4inches up the side - the high sides make sure that the ears brown but the rest of the buns don't). Knock back the dough and add in salt. Roll out into a sausage and lightly flour a clean surface. Cut the ends off the sausage (you'll use these pieces for the ears) and then divide the dough into 10 or 12 pieces. You can make unfilled rolls by rolling them into balls on the counter. This is a technique that I picked up that makes sure that there are no seams or cracks on the surface. It takes practice though and the surface has to have some sort of stickiness to it to roll it into a round. 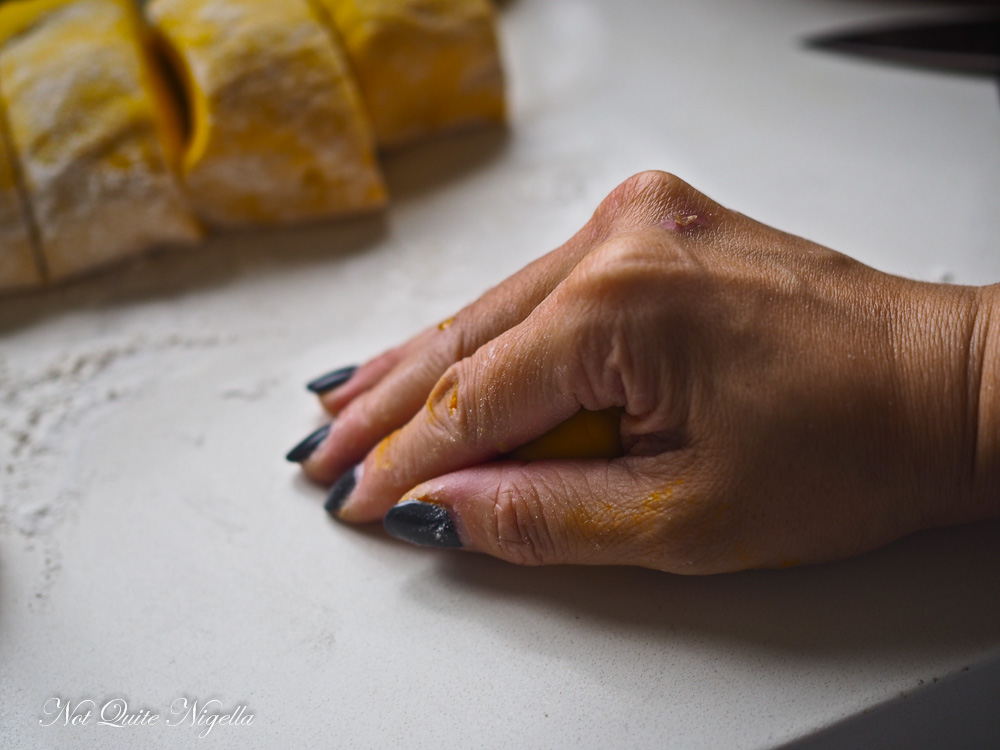 I know, I have unattractive hands. Not helped by a scrape I had with a wooden door!

Or if you are filling it, allow the dough to rest for 10 minutes and then roll out into a circle and fill with a heaped teaspoon of peanut butter, Nutella, grated cheese or I used Speculoos spread. Do the same technique rolling it up and making sure that there are no seams. 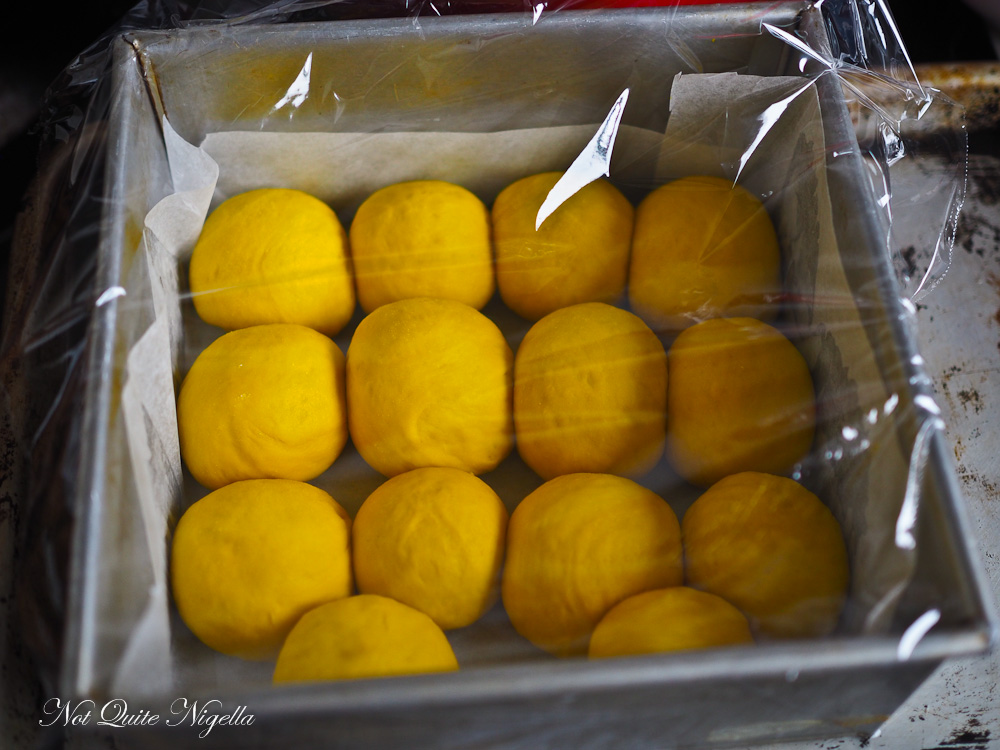 Allow to rise from this... 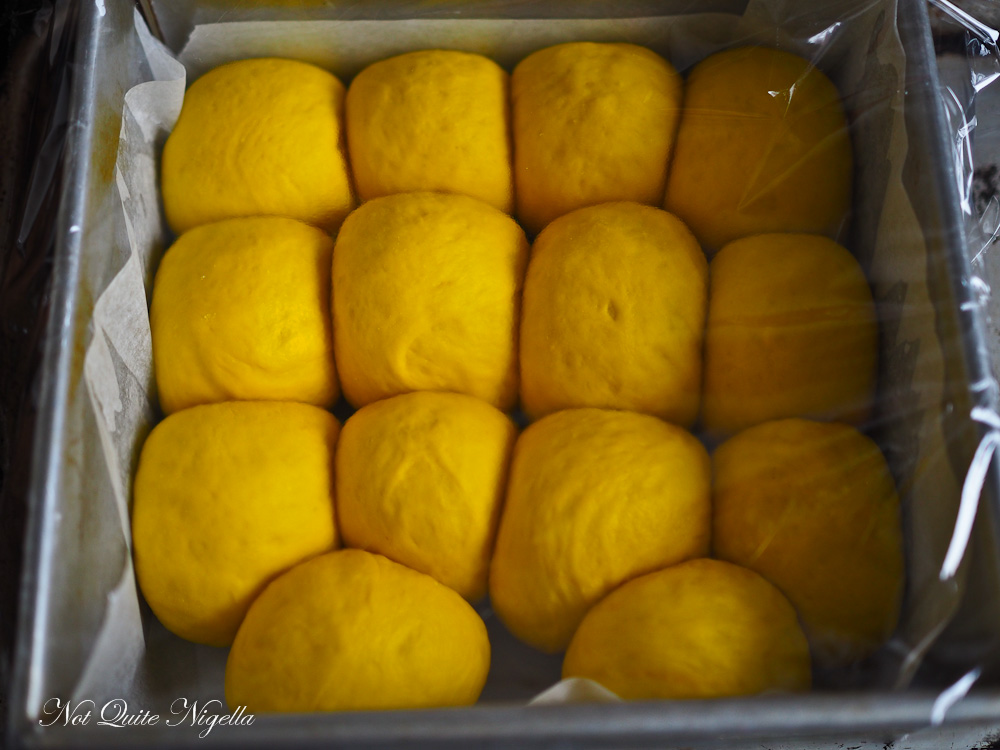 To this so that they sit snugly

Step 3 - Allow to rise in a warm place for 15 minutes. Then roll out the last two rolls and then cut out the ears. You will cut out strips about 3/4 of an inch long. Adhere them to the buns. You don't need these to rise again. Bake for 18 minutes. 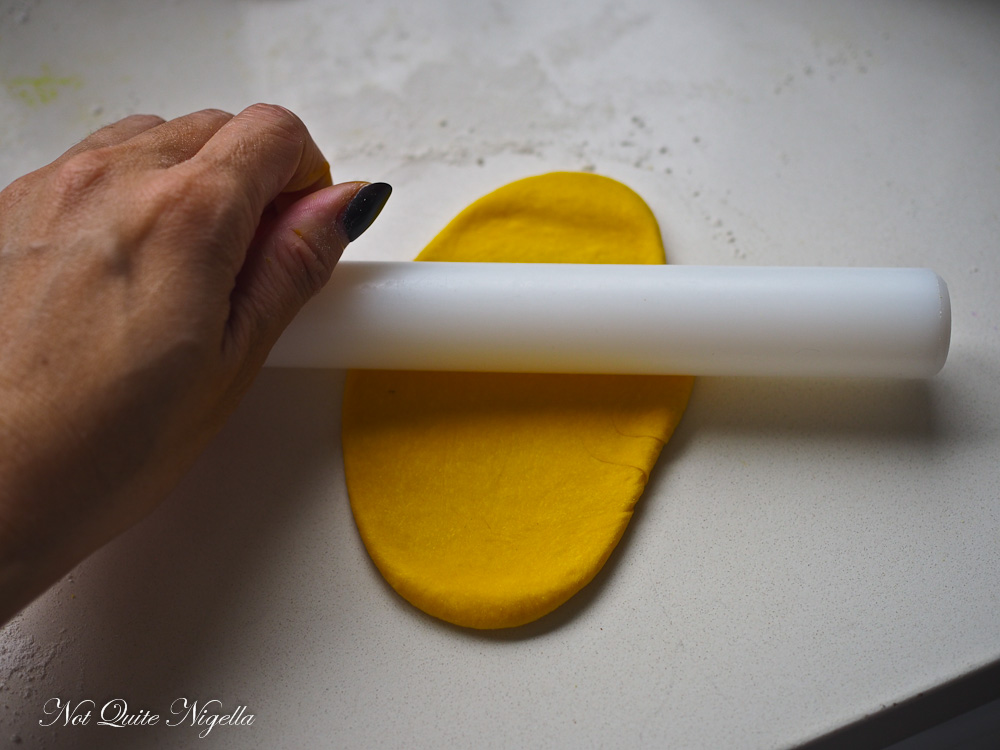 Roll out the ends to make the ears 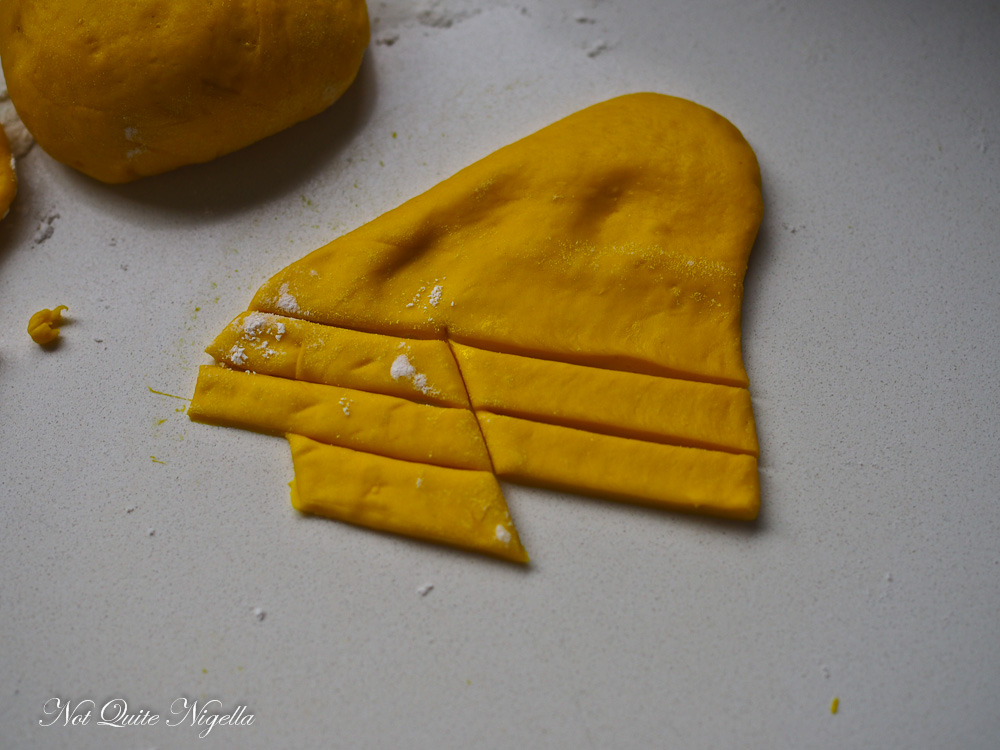 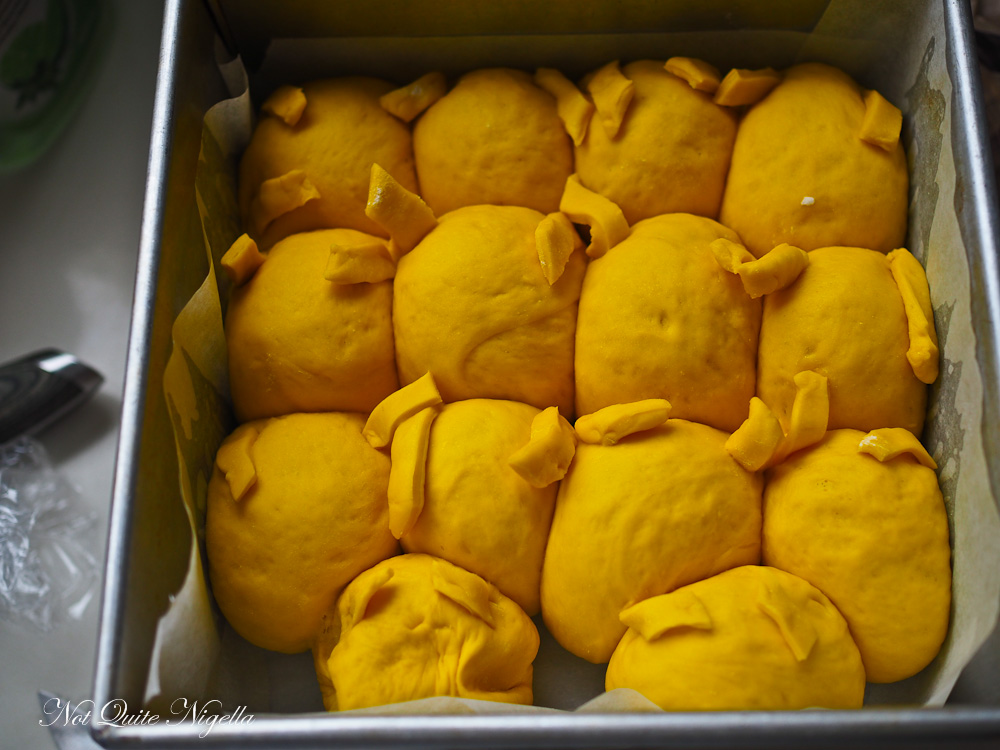 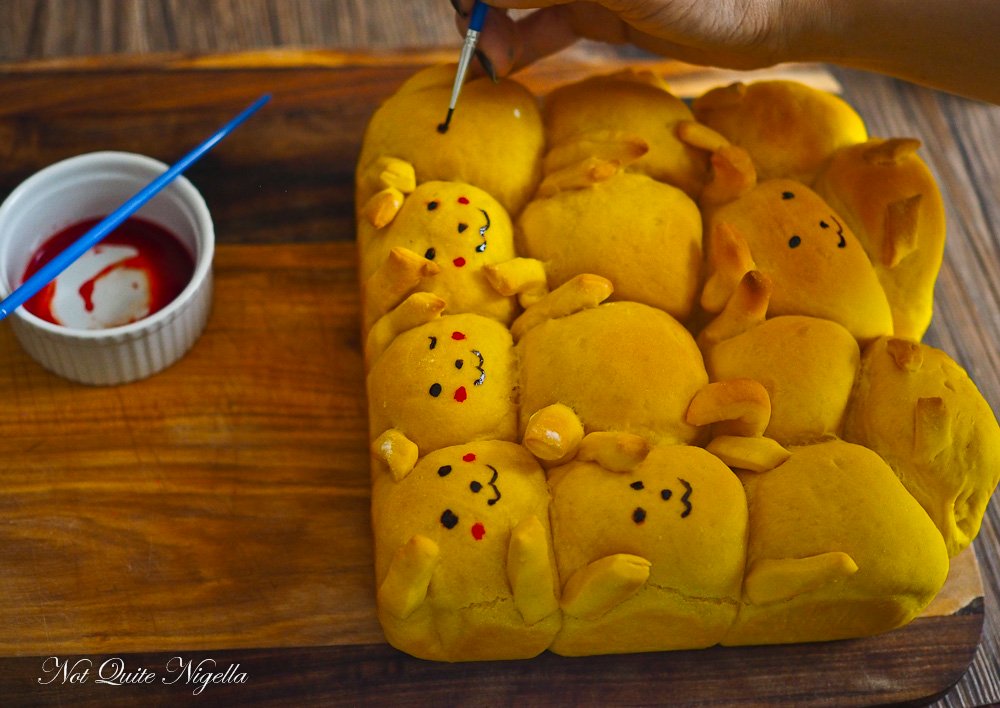