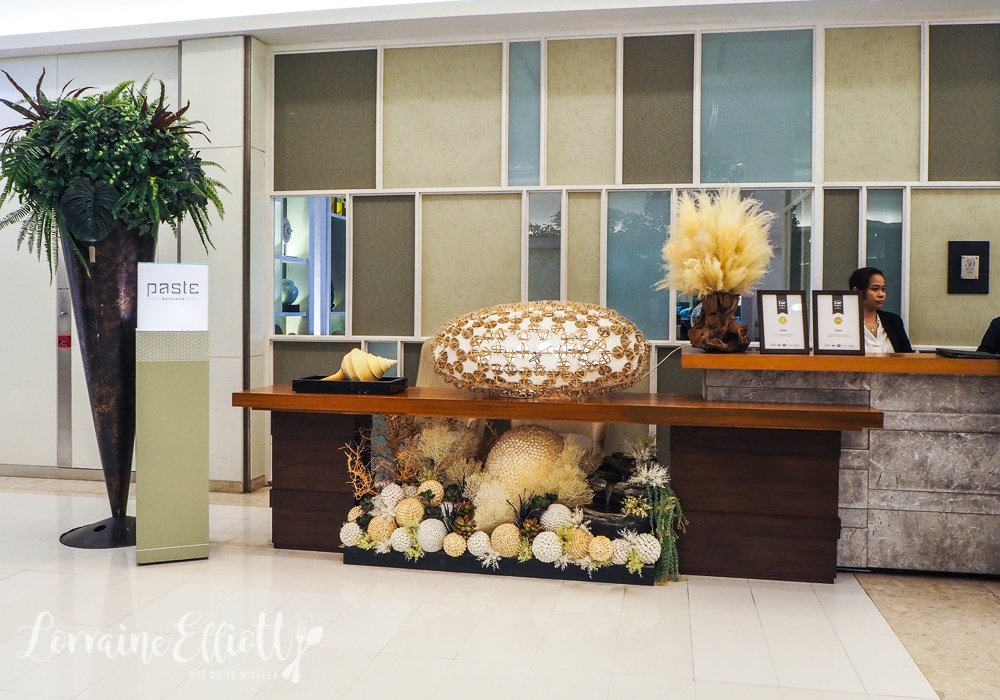 Chef Bee Satongun from Paste is one of the small number female chefs to appear on Bangkok's Michelin guide. Bee's focus is "heirloom Thai cuisine" and her modern interpretations of historic dishes gleaned from the worn pages of old cookbooks. 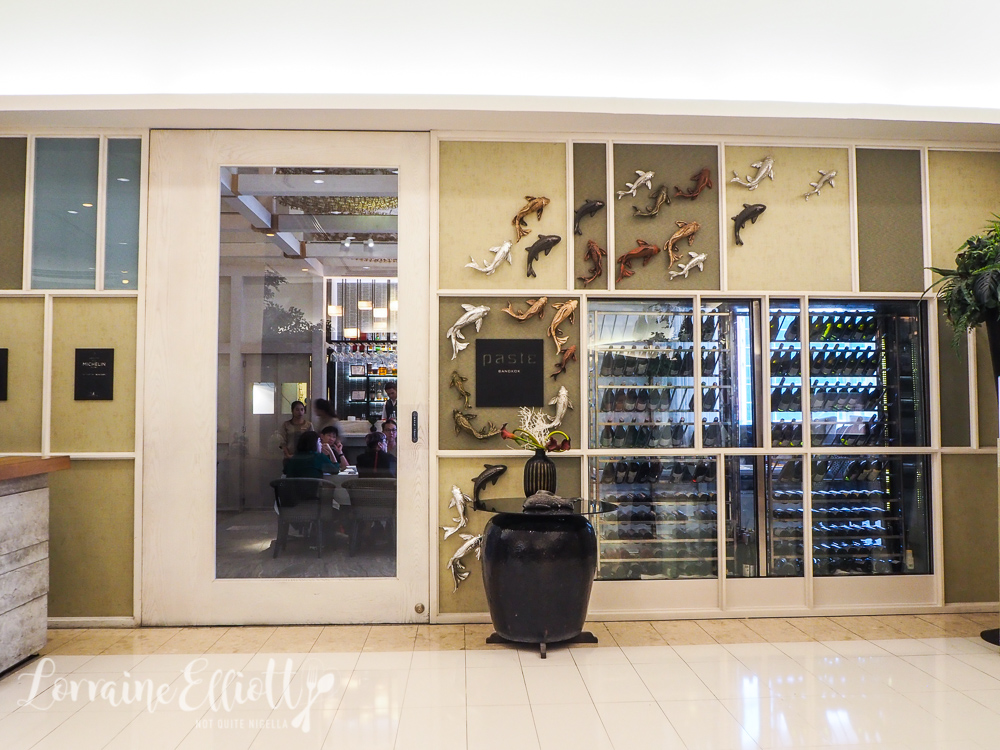 Located on the third floor of Gaysorn Plaza shopping centre it's the ideal place to try Thai cuisine fine dining style. Accommodating staff swing open the large glass door and you can either sit at a curved booth facing the window or at a table facing the kitchen and watch chef Bee busily working. At the time of our visit they were filming an episode of a tv show. 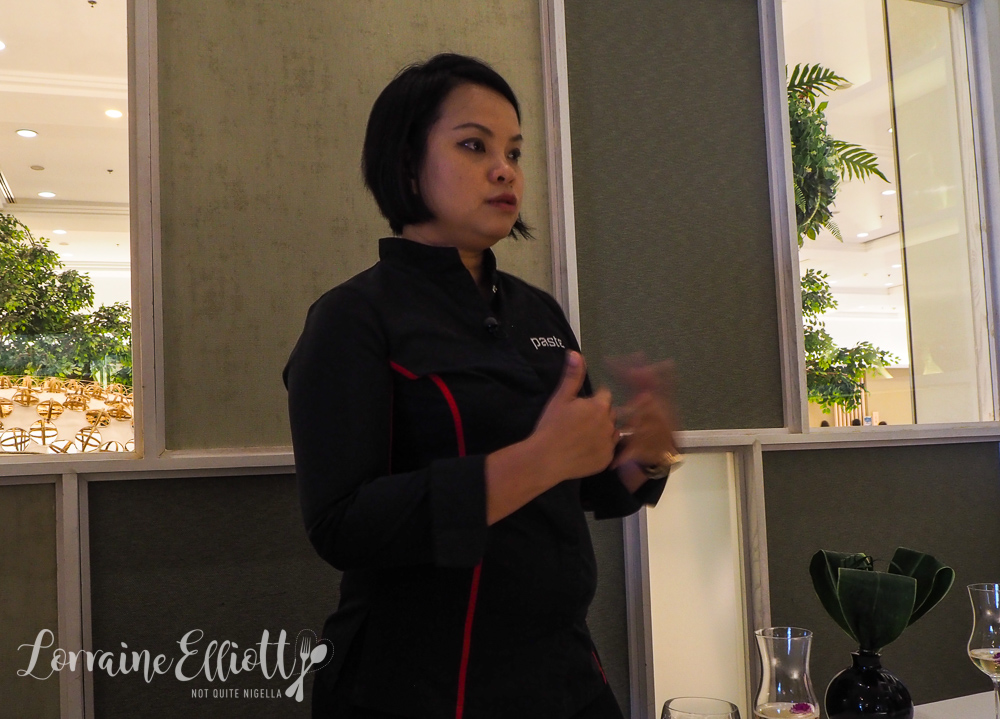 Bee grew up in Bangkok and her family had a modest eatery where her mother cooked classic Thai dishes. Her start as a chef was relatively late and began at the age of 28 when she married Australian chef and co-partner in Paste Jason Bailey. Her dishes feature complex flavour combinations and each dish has around 30 ingredients. She has spent time training in Australia and considers Tetsuya Wakuda an influence in the way that he uses Asian flavours and ingredients.

Bee says, "There’s a huge misconception that Thai food is only a street food (the best Thai food is certainly not found on the streets) or street food presented on western china and I hope to change that." She also adds, "Thai food reached its peak between 1870 and 1930. There is some tremendously mind blowing, complex dishes and techniques from this period in Thailand's history. The palace cuisine of the mid-19th century and early 20th century is when the Thai noble society was embracing a more international perspective. It was also a period when Thais began writing down their recipes for the first time." It is also the period of finishing schools and etiquette guides in Thailand. 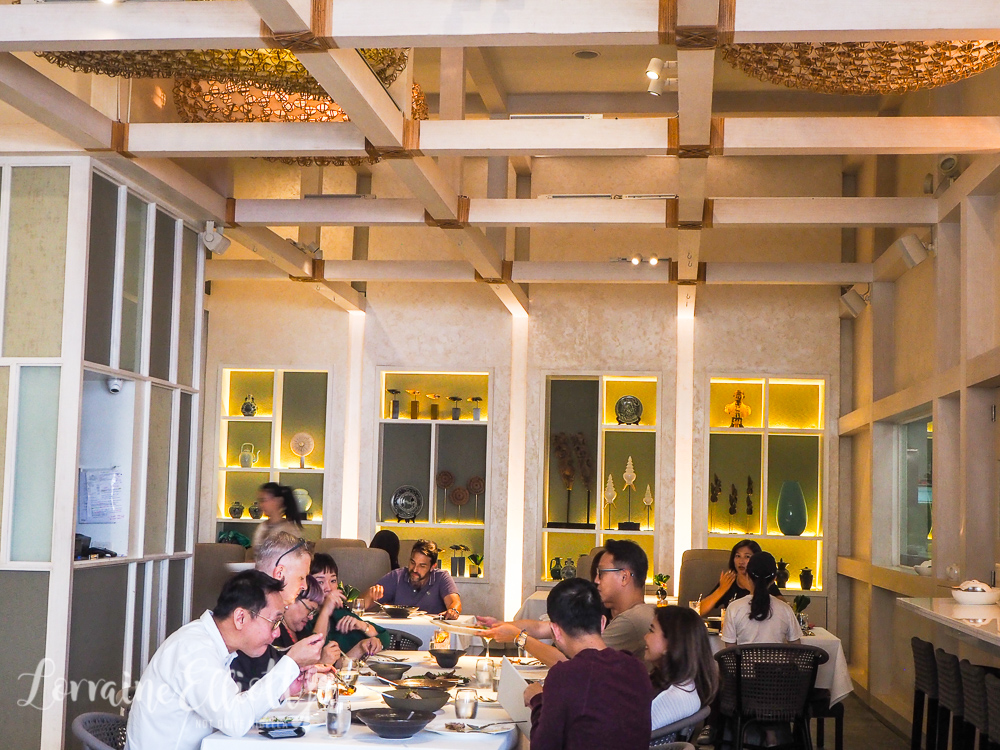 She is also opening a version of Paste in Luang Prabang at The Apsara Hotel and doing the same with historical Laotian recipes. Bee's family heritage traces back across northern Thailand and Laos giving her a genetic connection to the country and cuisine. 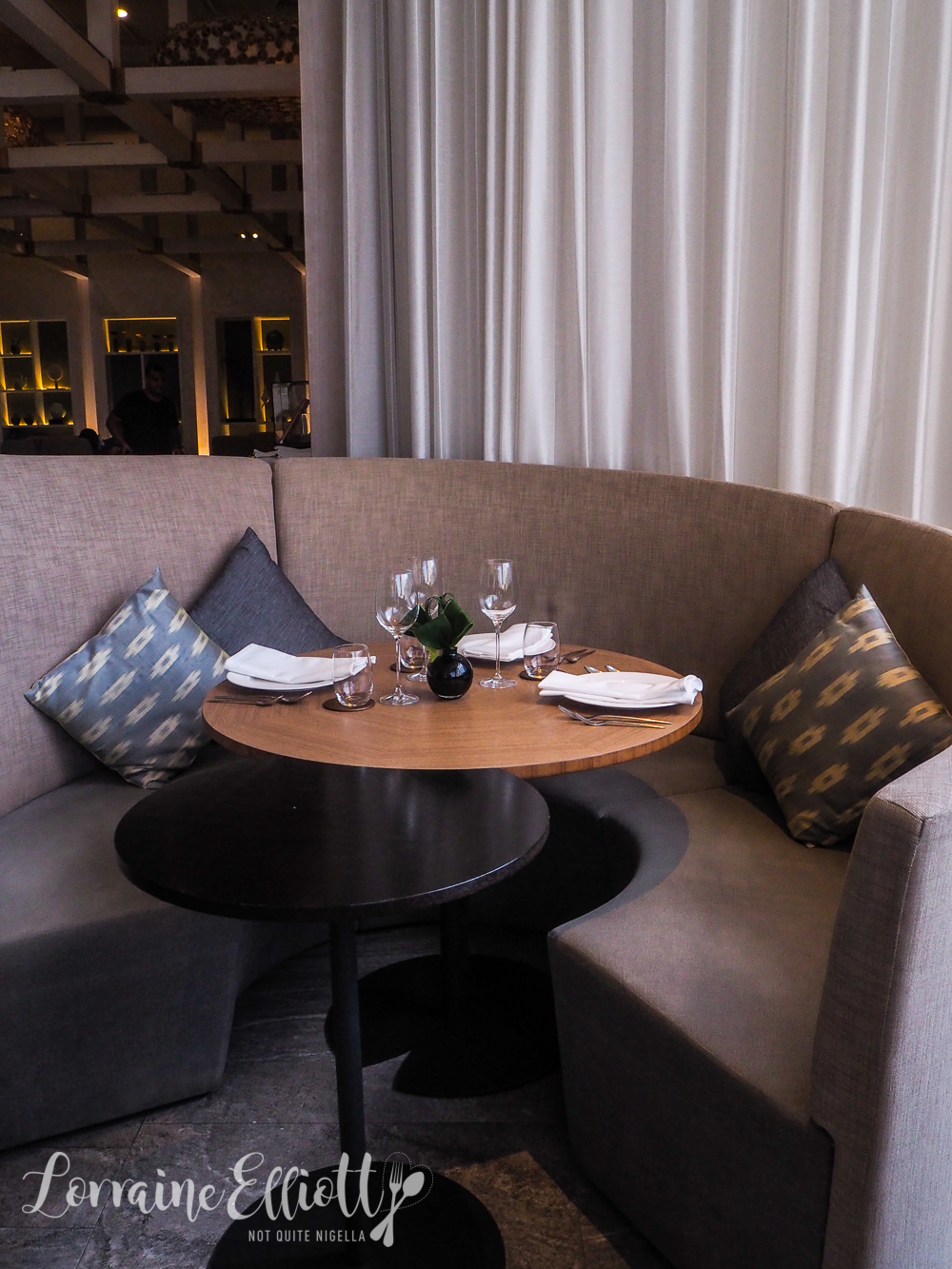 We tried a tasting menu that gives you a bit of everything. The menu explains that Thai food is best enjoyed with something from six categories of steamed, soup, fried, curry, salad, relish with rice being at the centre. The menu is then broken down into all of these six sections. 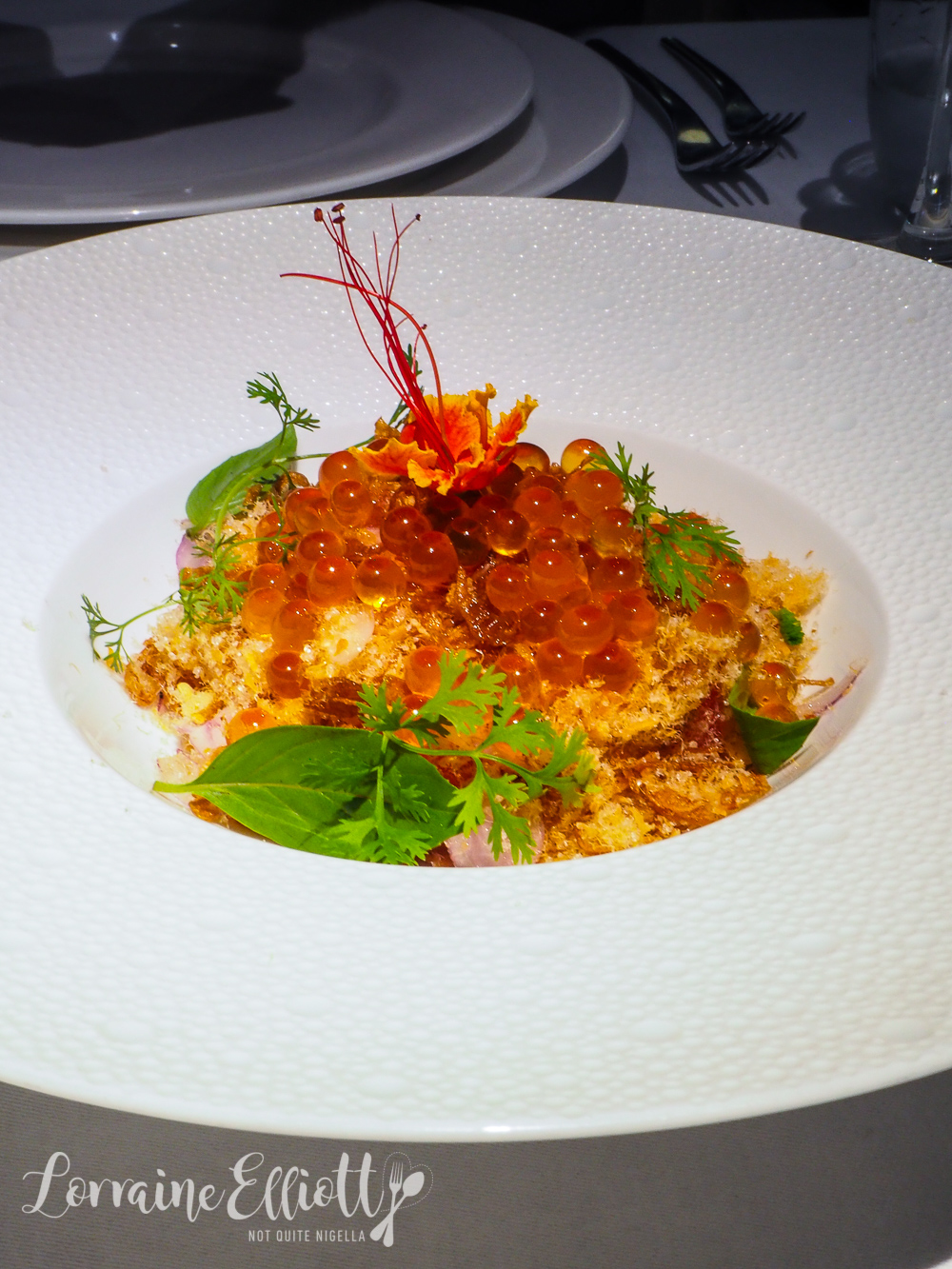 The watermelon starter is one of their signature dishes. Watermelon balls are rolled in a flavoursome mix of fried shallots and roasted galangal powder and topped with salmon roe for a salty pop. 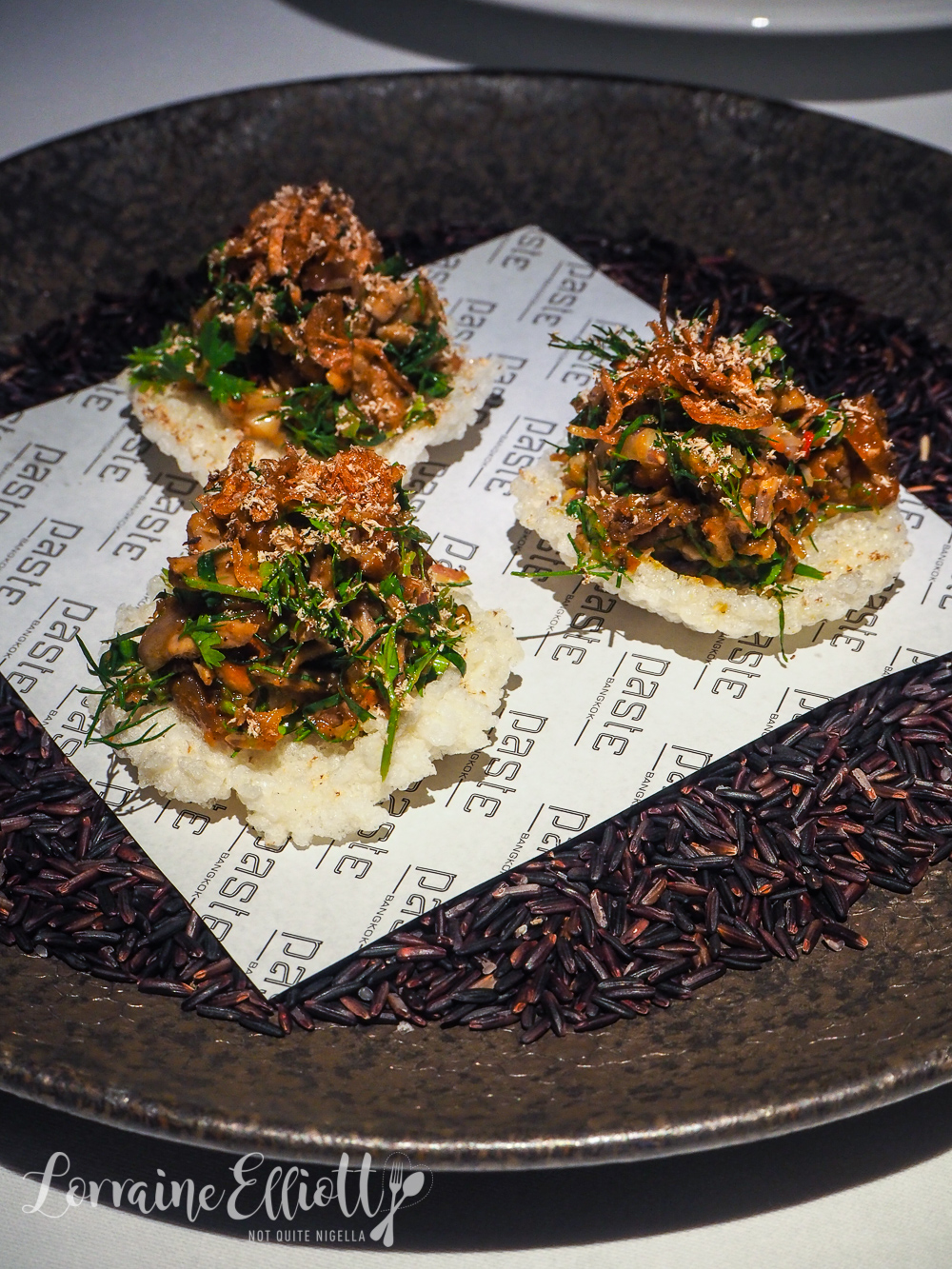 The crunchy rice crackers are topped with shredded roast duck with sawtooth coriander and a fine dusting of nutmeg powder. The crackers are appealingly crunchy and remain that way until the last bite. Bee explains that she was inspired to make these from a recipe by Snidwongse family cookbook Royal Thai Cuisine printed in 1968. She says that this cookbook in particular was referenced because, "There were a lot of aristocrat cookbooks during that period. The cookbook from different families depends who they get involved or in contact with. For example some families might marry with Chinese so their Thai food is created by mixing Thai with Chinese ingredients such as Chilli relish with black olives. But for Snidwongse they always remained Thai and their created dishes still remain true Thai flavors." 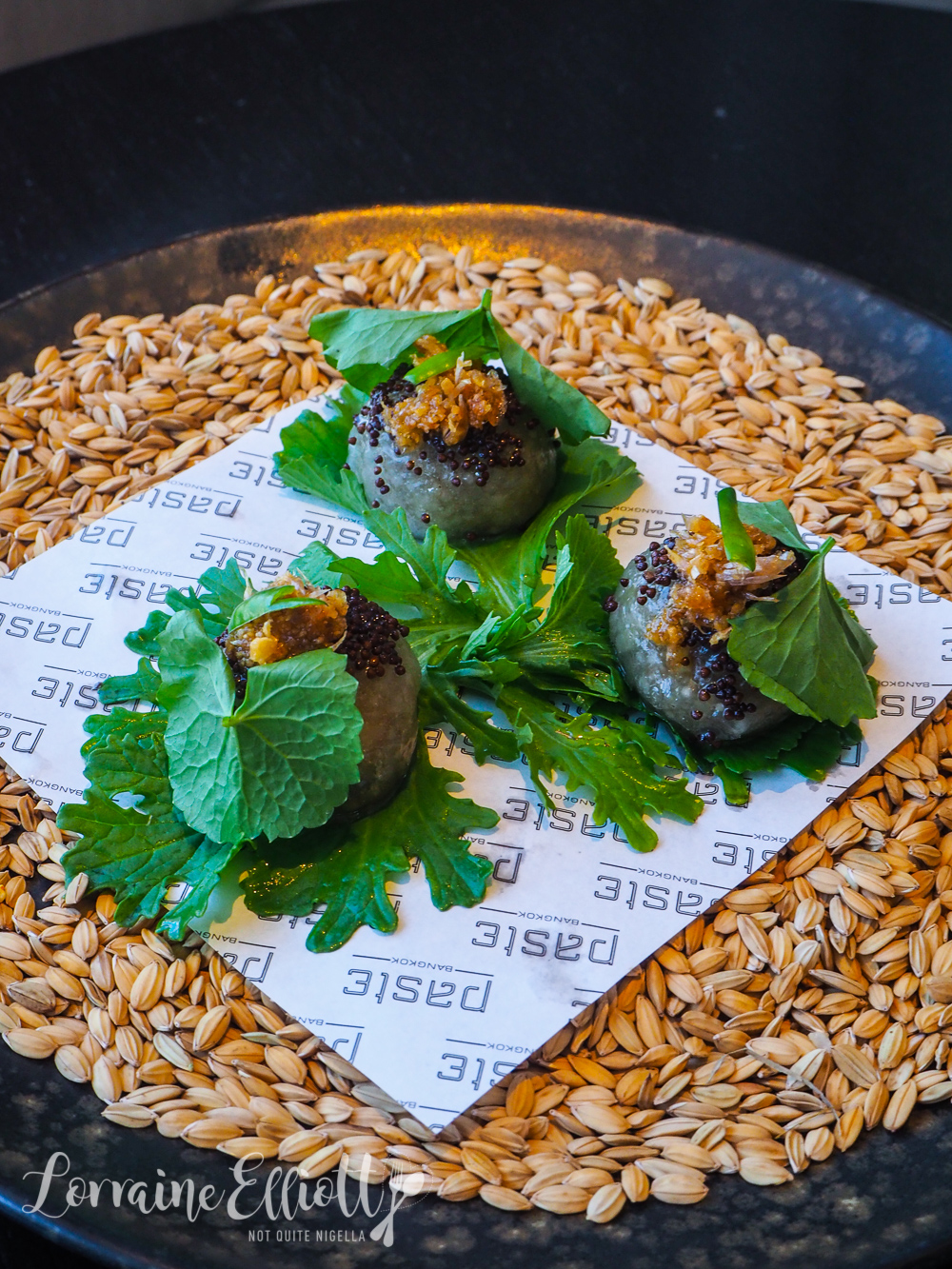 The delicious semi translucent tapioca dumplings are stuffed with Royal Project smoked trout, roasted peanuts and are given pep from Thai mustard leaf and wild sesame. 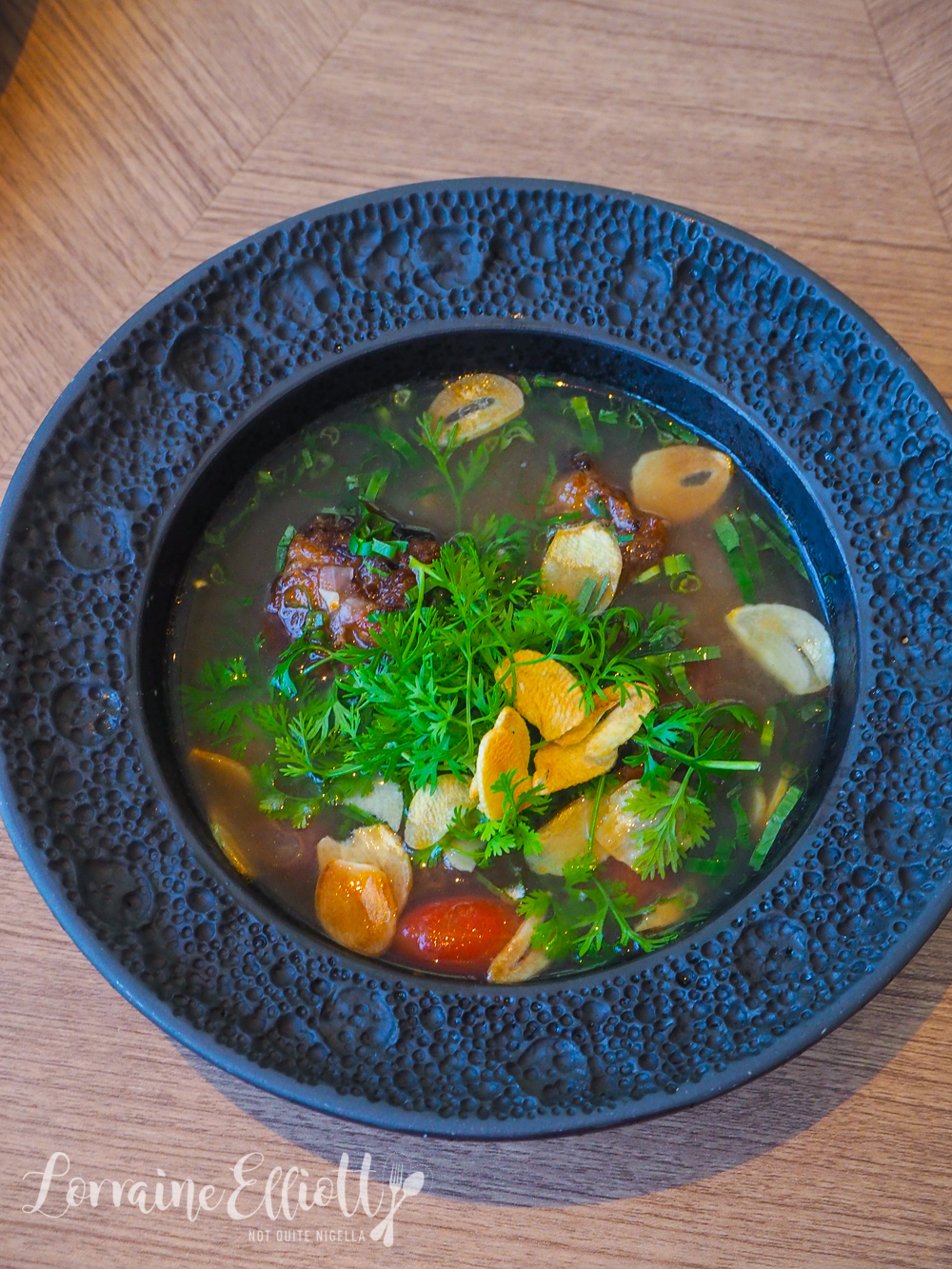 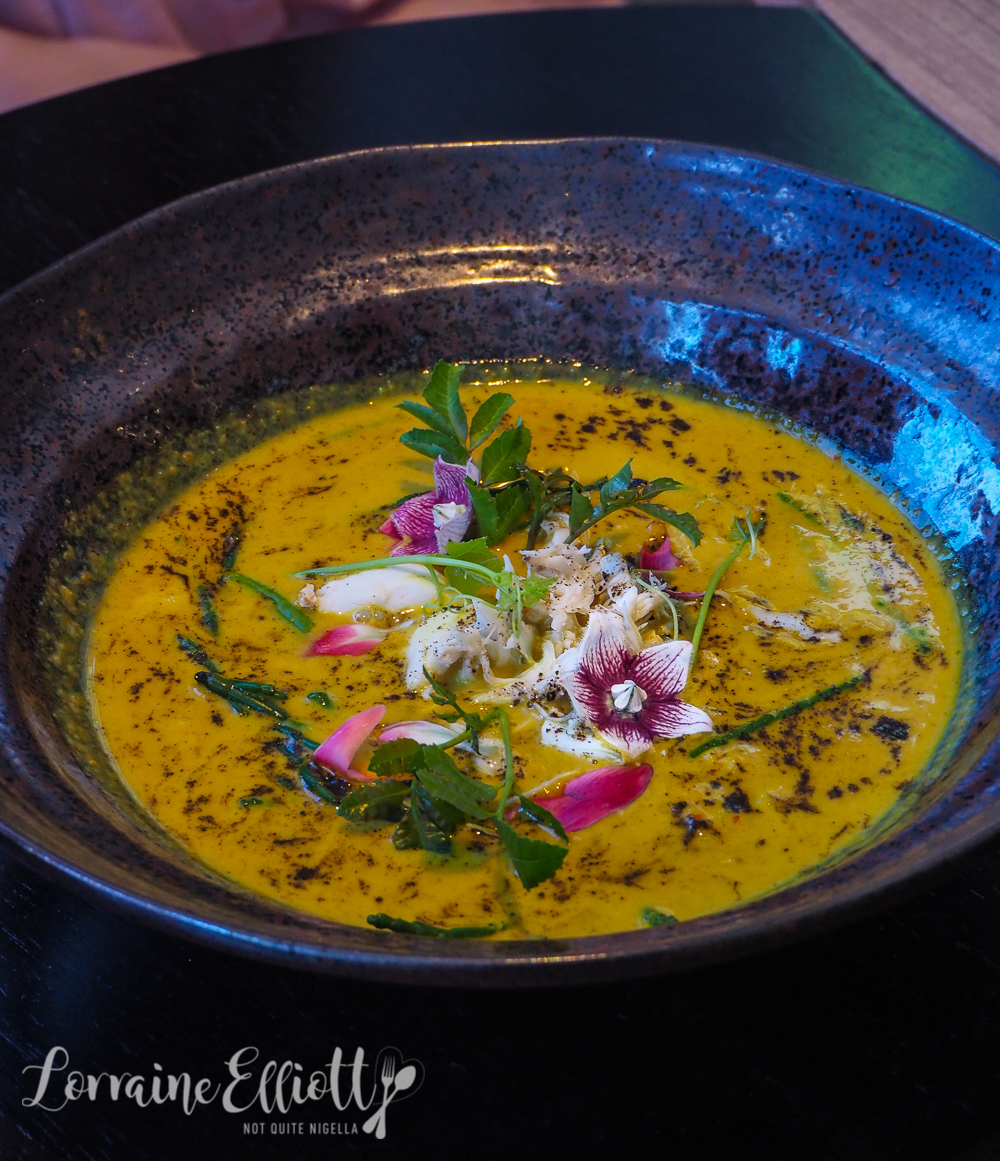 The menu then segues into more substantial plates. There is a bowl of Southern crab curry that has a wonderful depth of flavour and complexity. There's a generous amount of crab in there too and I enjoy the textures and flavours immensely. Bee explains the use of hummingbird flowers, "The flowers are eaten as a vegetable in South Asia, including Laos, Thailand, Java in Indonesia, Vietnam, Maldives. In the Thai language, the flowers are called ดอกแค (dok khae) and are used in the cuisine both cooked in curries, such as kaeng som and kaeng khae, and raw as an accompaniment with nam phrik relishes." She also tells me that the Thai samphire grows in the coastal salt water area although normally they grown wild near salt farms or the coast. 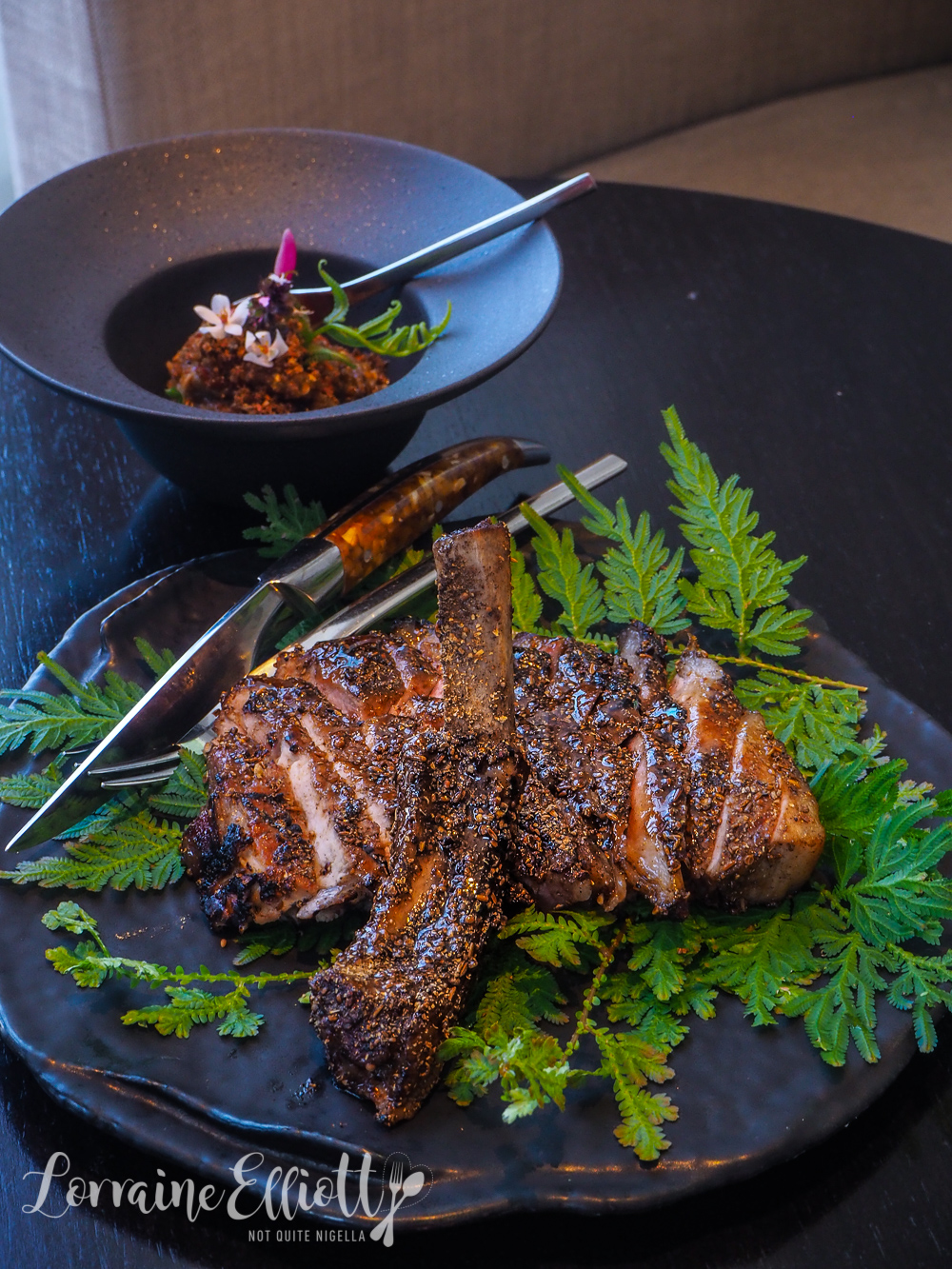 I also love the char grilled organic pork steak which is glazed with wild honey and fennel seeds. It comes with a smoked eggplant and tomato relish that gives the rich meat a mild piquancy. And you can bet I took the bone to nibble on. 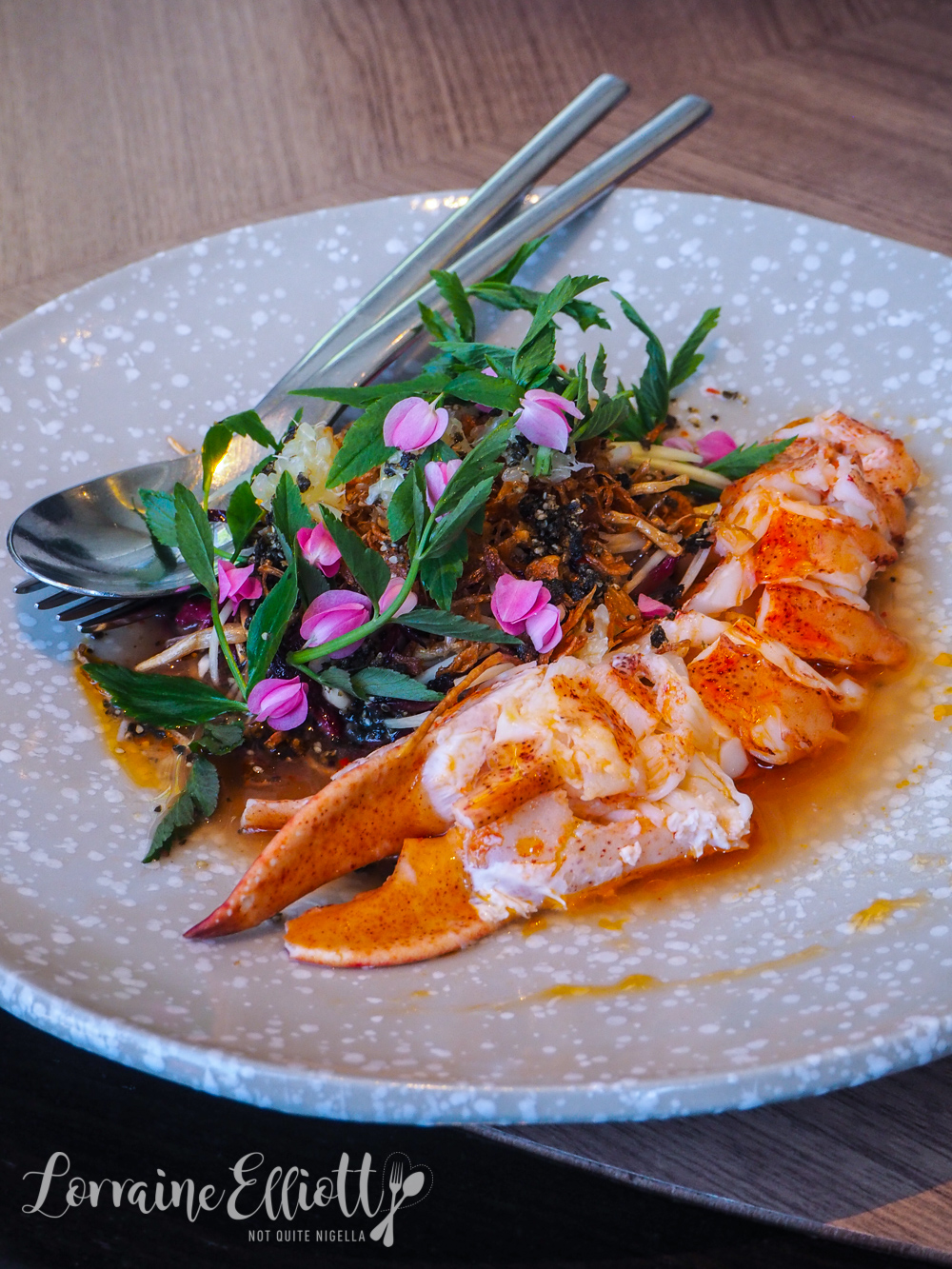 We are also treated to the live lobster from the tank that is buttery tender. This is served with a chive root salad, morel mushrooms, Asian citron, air dried seaweed and white turmeric. Asian citron is called Som Saa in Thai and the zest and juice is used mostly in old Thai dishes eg. zest in chilli relish and mee grob while the juice is used for curries or traditional Thai desserts. Bee says, "This fruit is quite hard to find as the new generation do not know and understand about them, so not many are grow anymore." Interestingly white turmeric which is an ancient spice is actually similar to ginger that was used in old Thai recipes but has now been replaced by standard ginger. Although, it belongs to the turmeric family, it smells like mango and turmeric and looks a lot like normal ginger. 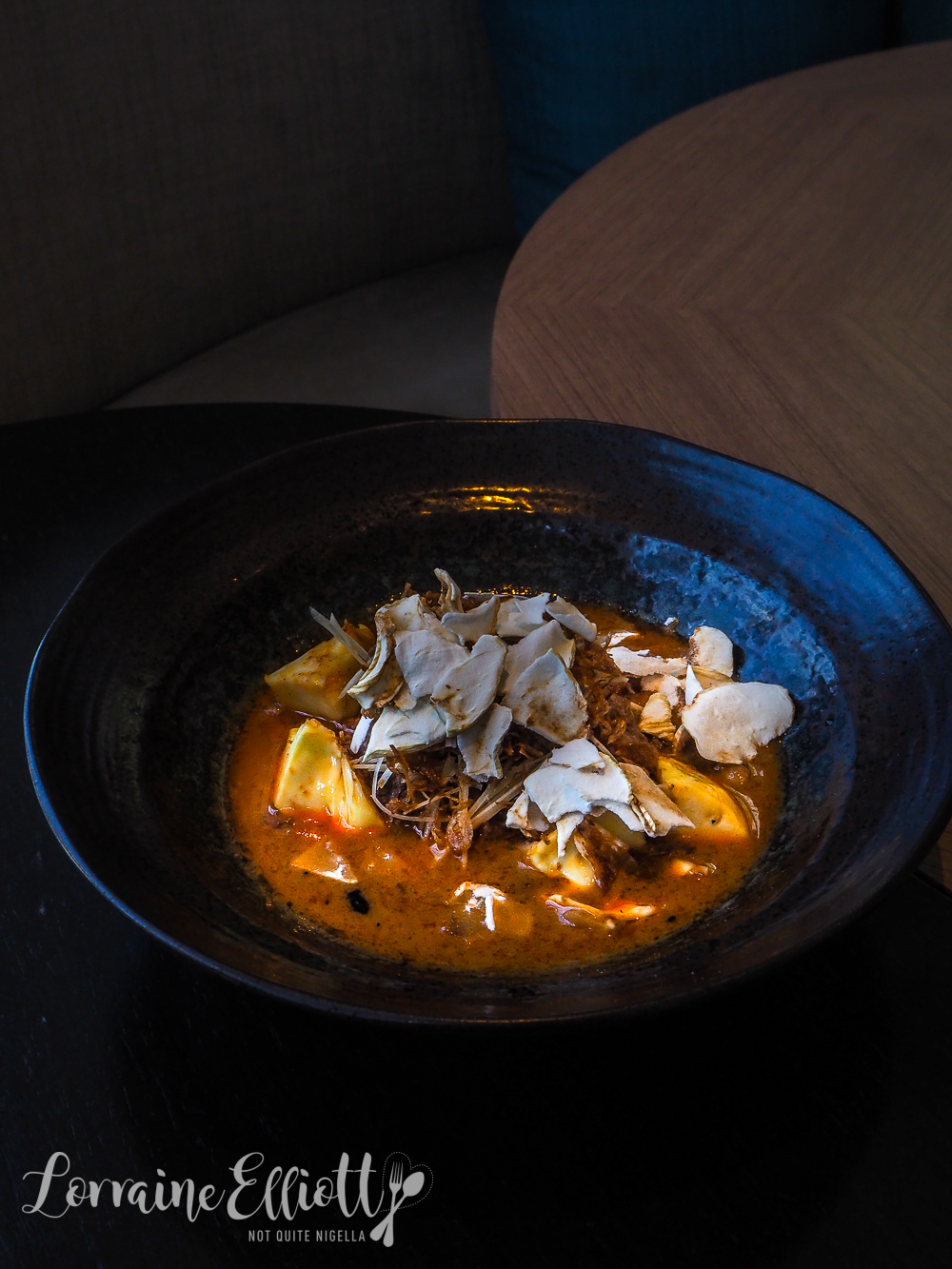 The massaman curry here uses tender lamb with young Mhon Thong durian, Thai cardamom and dried coconut apple. Bee explains that she was inspired by the food of Chanthaburi (that we are headed to in a few days) where they often pair fruit with meat. And the big question, how does the durian taste in a curry? It's very mild compared to the rich lamb and sauce and takes the backseat to the rest of the flavours. 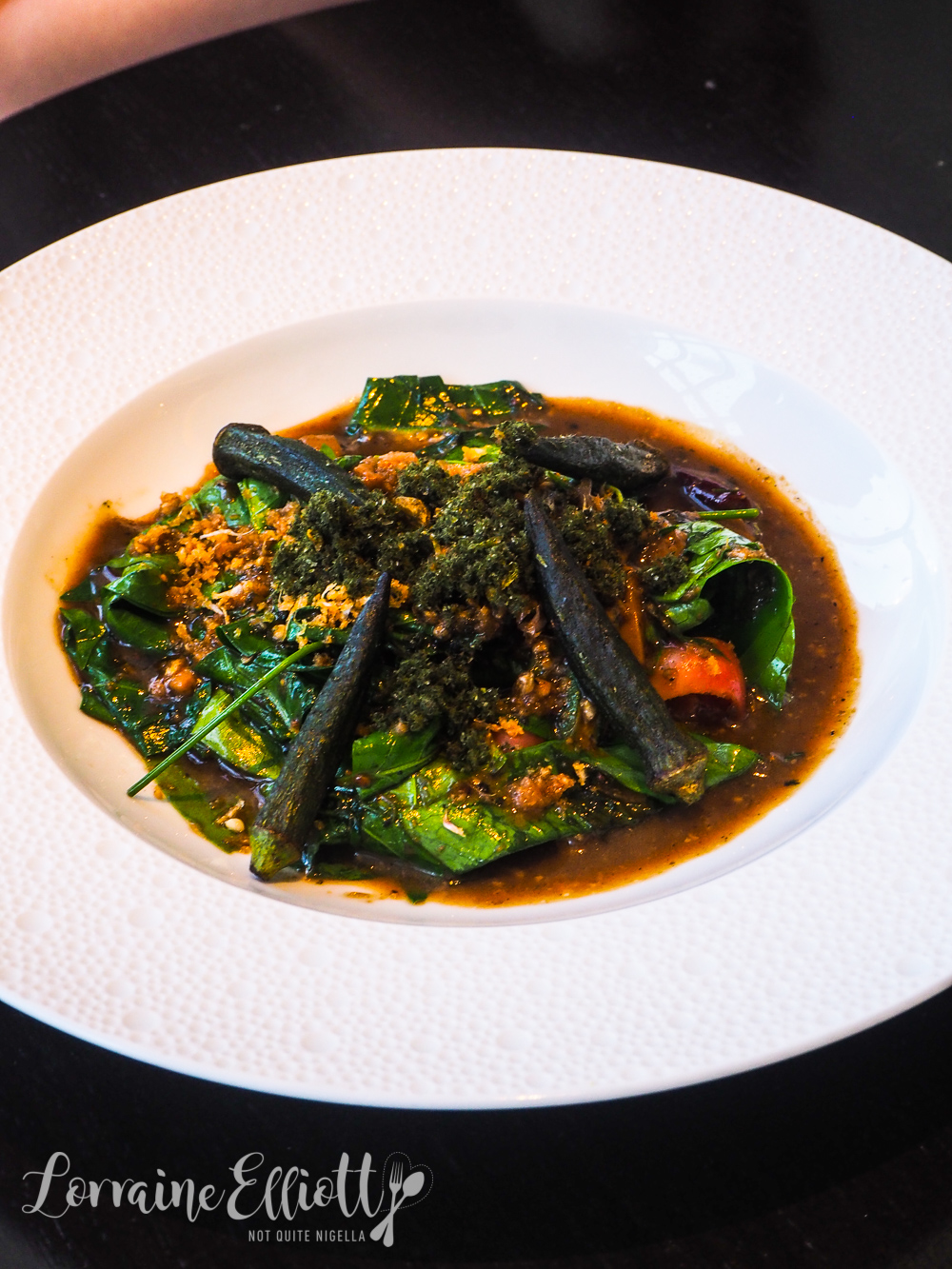 It's hard to choose a favourite dish here and even the vegetables have so much flavour. This a stir fry of pak chiangda leaves and sesame with Bengal currants. Bee says, "Bengal currants or sour plums forms an unexpected piquant mid-tone for stir fried greens and okra in this dish." 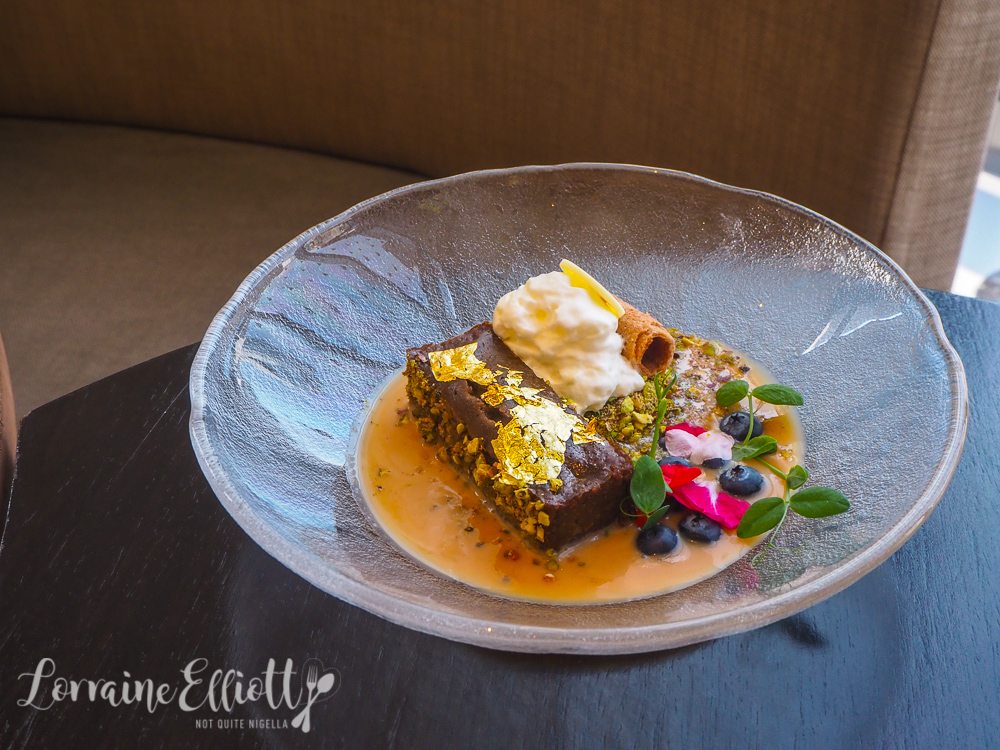 The dessert courses come out next and there is a coffee chestnut Thai custard log that is a firm, almost cake-like consistency. It comes with caramel cream and milk supreme espuma. 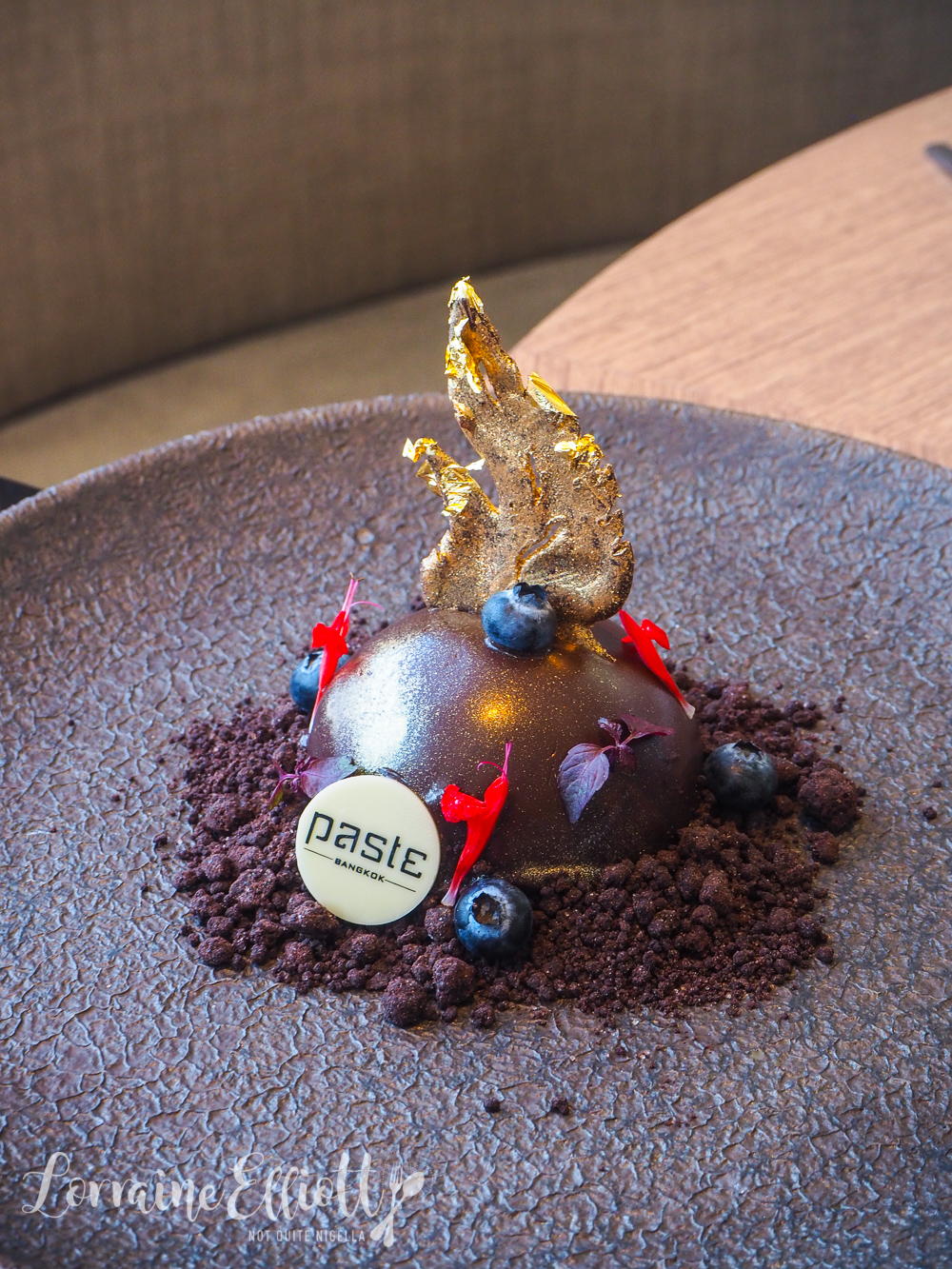 While the chocolate dome is more a Western style chocolate dessert. Hiding inside is a tangy passionfruit and banana gel in a Valrhona chocolate glaze coating. 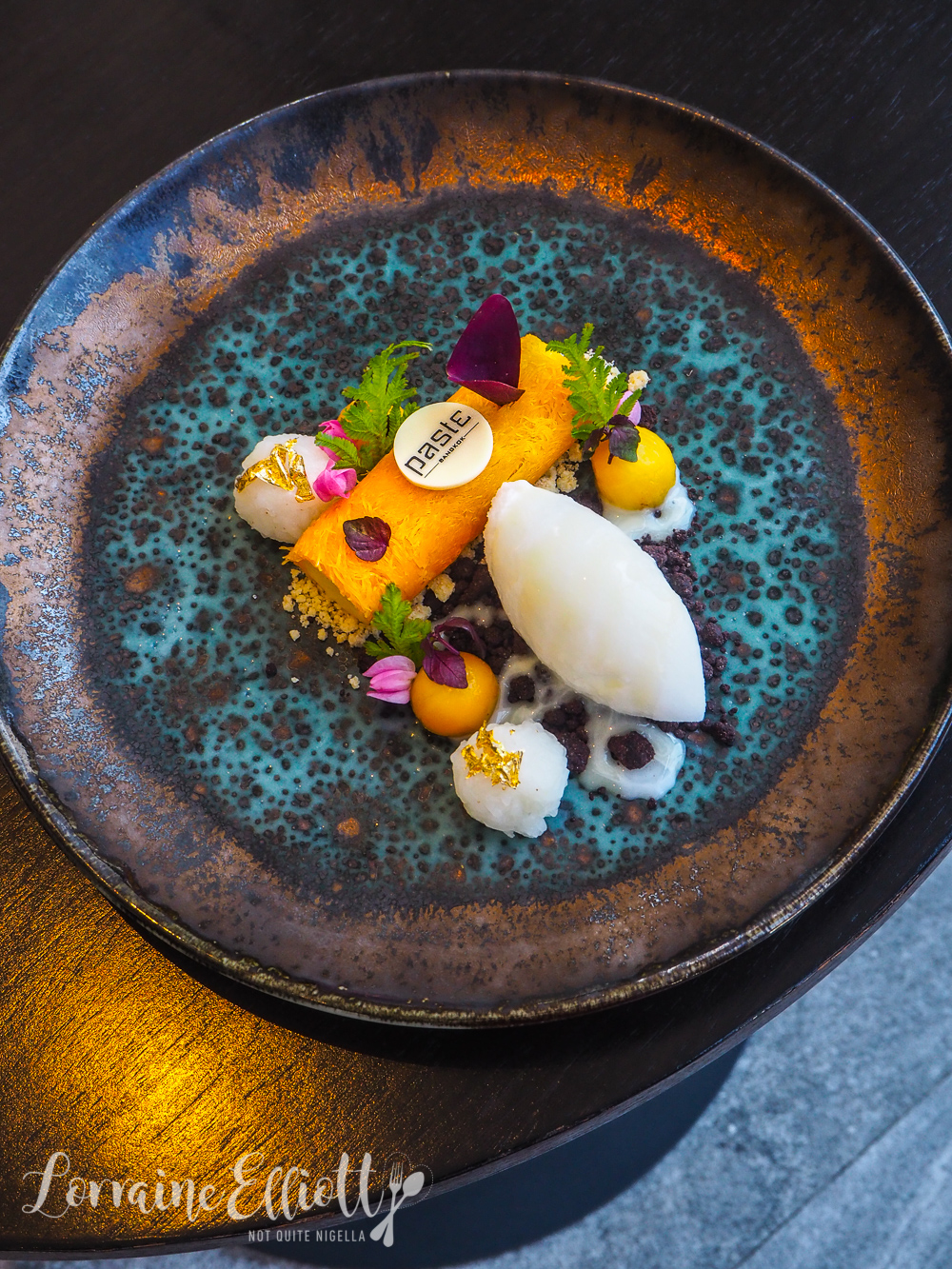 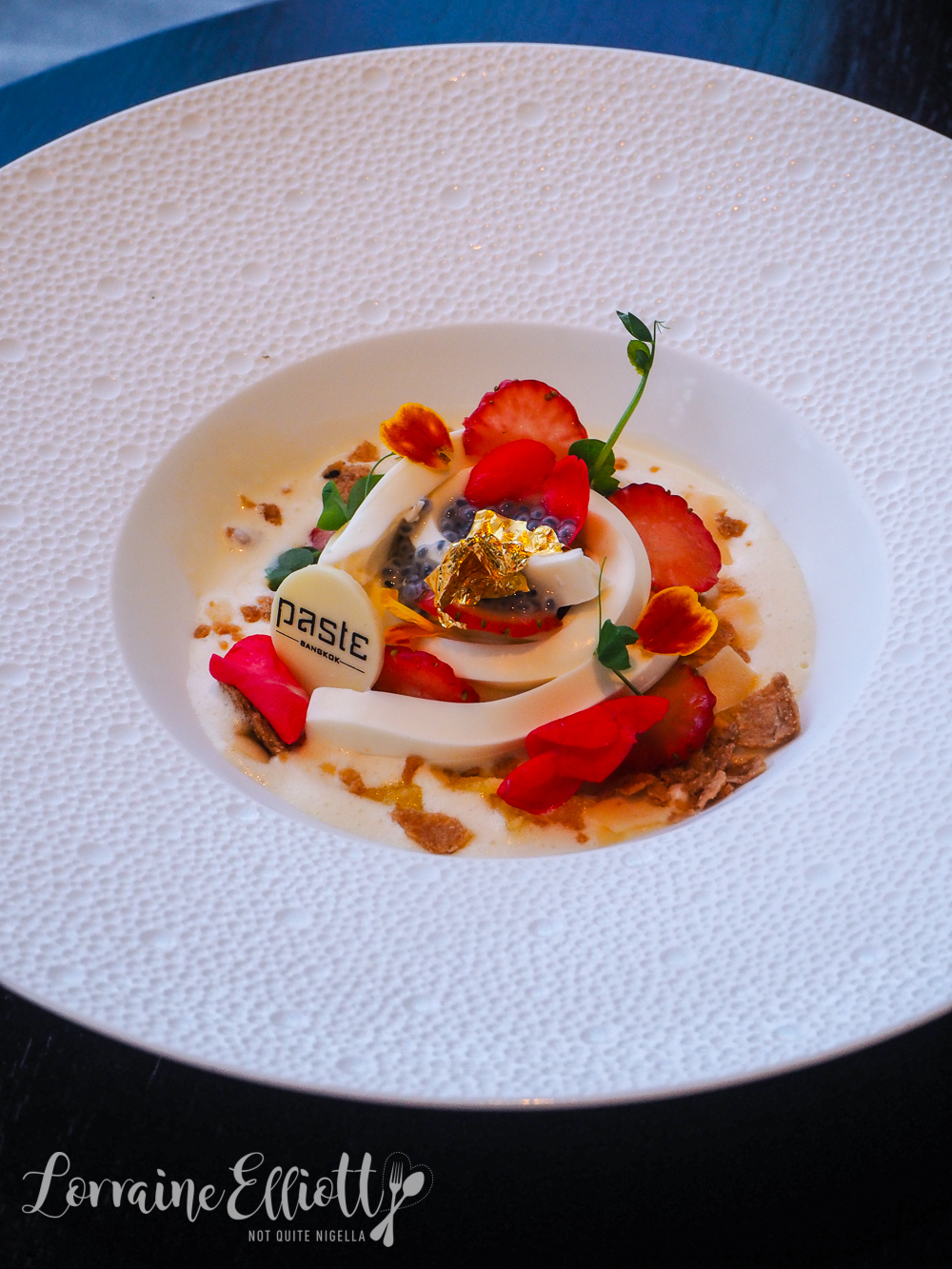 But hands down my favourite dessert is the coconut noodles which are "noodles" made from coconut milk jelly with smoked coconut noodles with palm sugar sabayon, lemon basil seed and intensely delicious dried pineapple.

So tell me Dear Reader, have you ever tried upmarket Thai cuisine? How do you feel about durian?

NQN was a guest of the Tourism Authority of Thailand but all opinions remain her own.