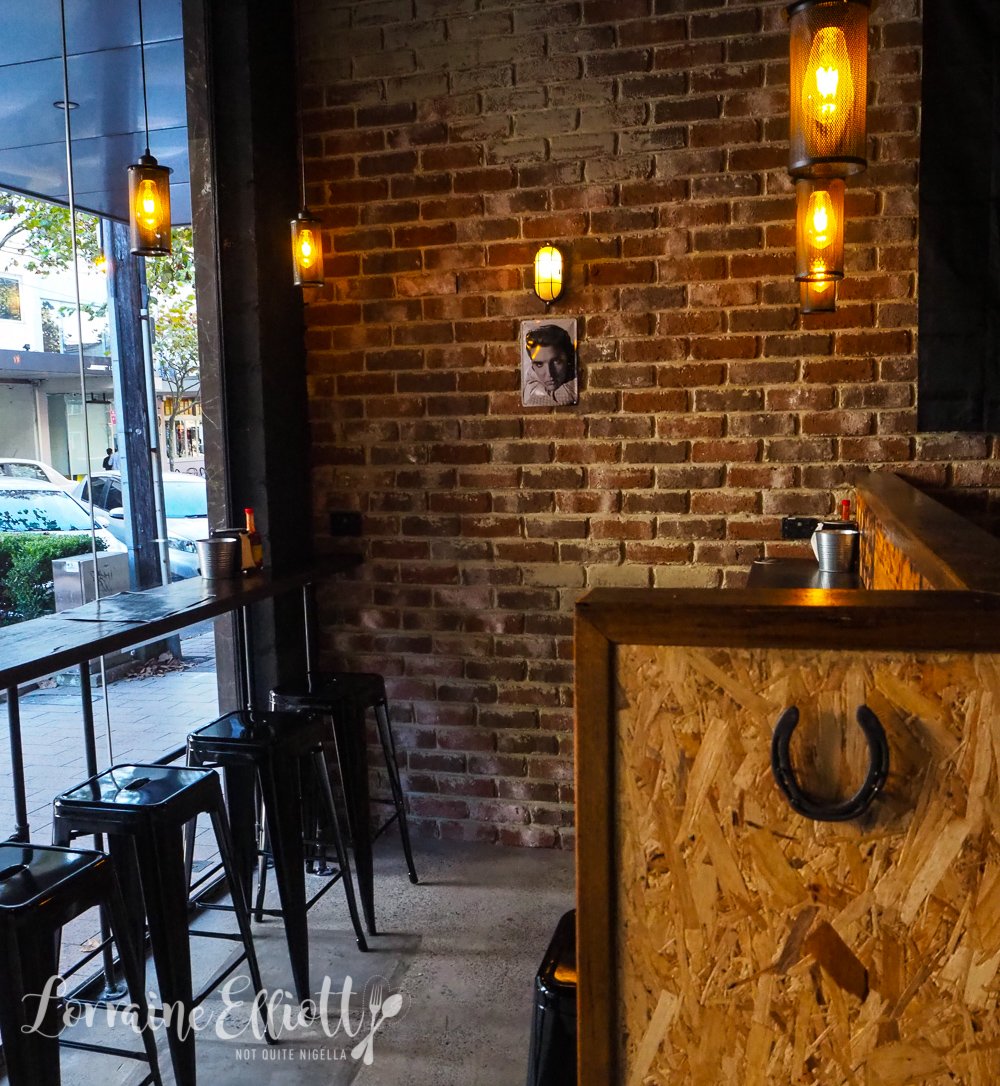 Heads up! There's a brand new American chicken wing and burger joint in town and it's as authentic as you can get. WingMill on Young Street in Neutral Bay is all about birds and brew i.e. chicken wings and beer. There are 8 types of American style wings, loaded fries, frickles, salads gigantic poured root beers and beer on tap! 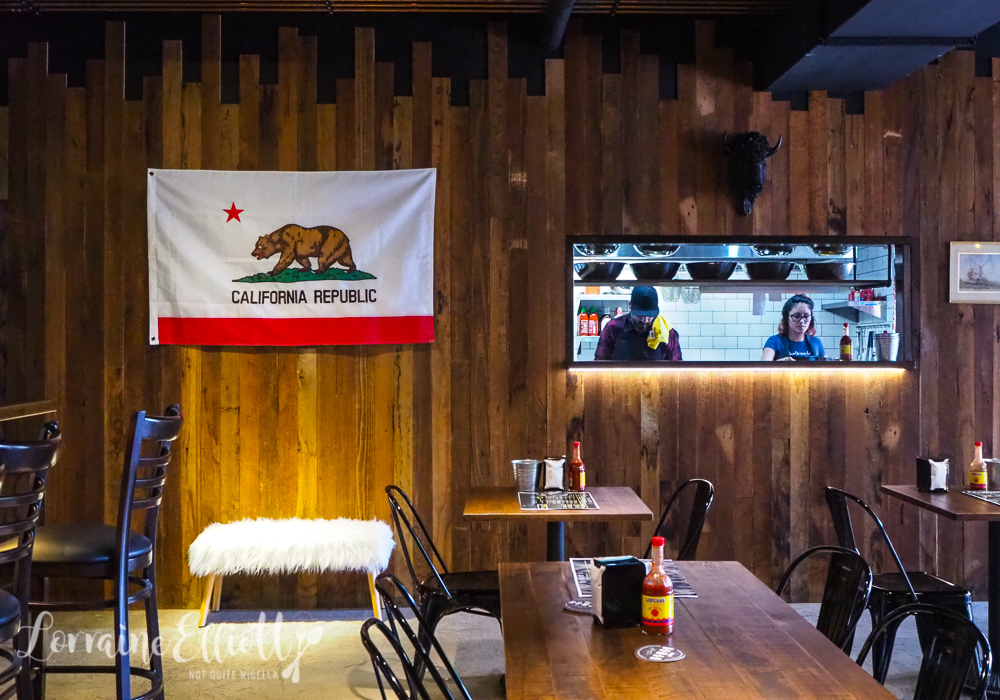 There's this thing that Ryan always does when he enters a restaurant. He walks over to the chef or someone else in charge, shakes their hands and introduces himself. I don't know whether it's a 1) guy thing or 2) an American thing or 3) a Ryan thing. 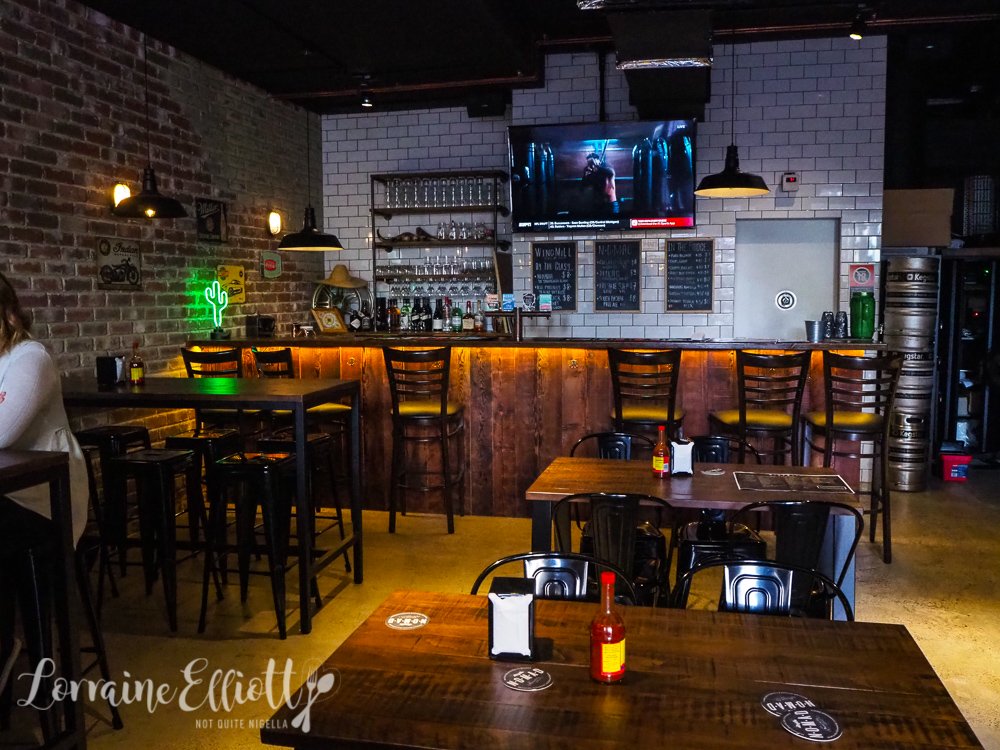 By the time Mr NQN and I arrive there Ryan has done his thing and he and Ivy have already ascertained what's good and found out a bit about the place and the chef. And speaking of Americanisms, Ivy found the fortnight old WingMill on her expat facebook group. One woman had vouched for the authenticity of the wings and so a quick date was set to visit WingMill a few days later (we don't mess about!). 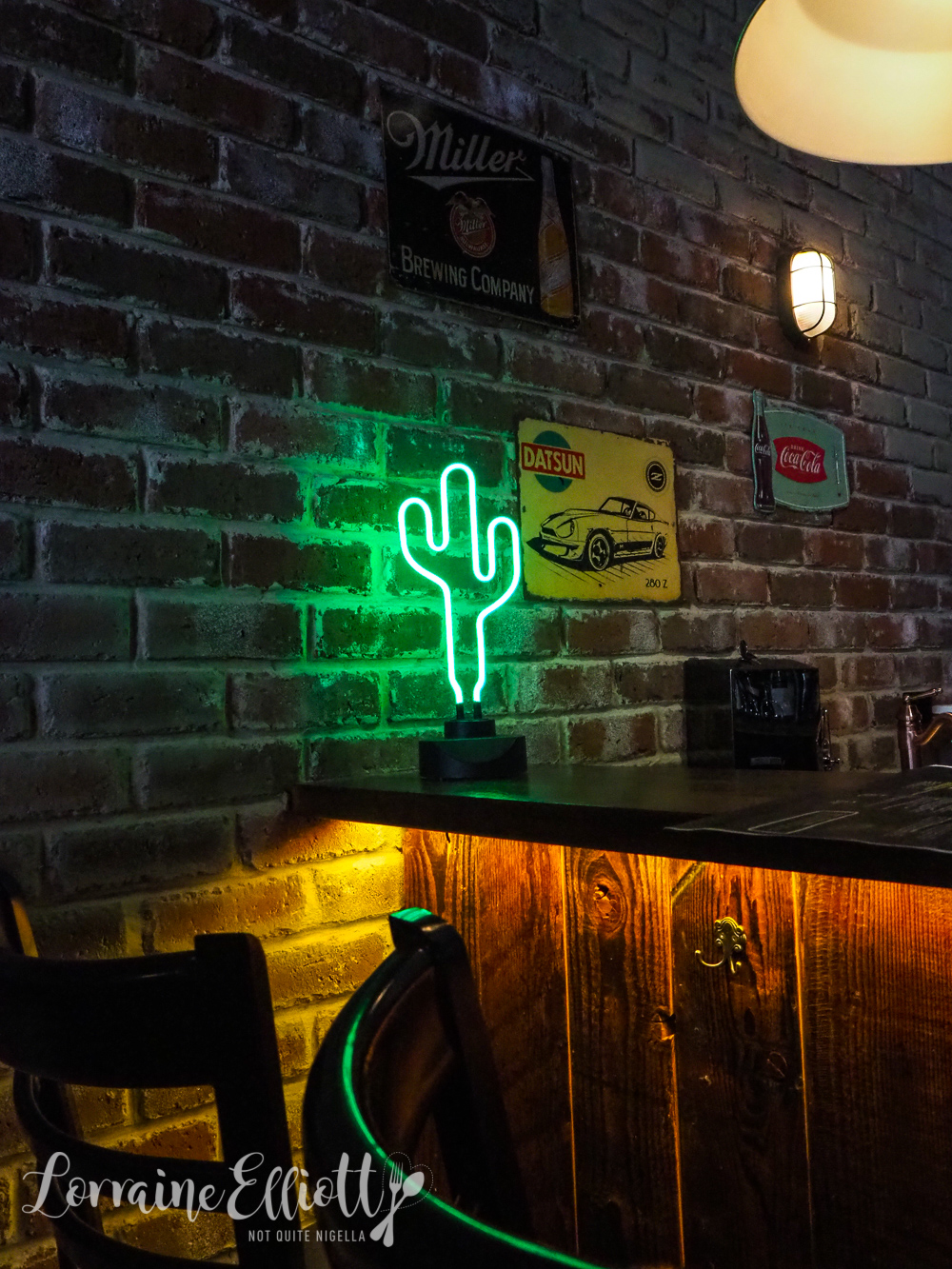 The menu is a good size, enough choice but not too much so that you're paralysed with choice. There's a list of eight types of wings as well as other American/Canadian sides and desserts. There are two large flat screens playing American sports games and bluegrass and country musician Robert Earl Keen plays in the background. There is also some outdoor dog friendly bench seating. 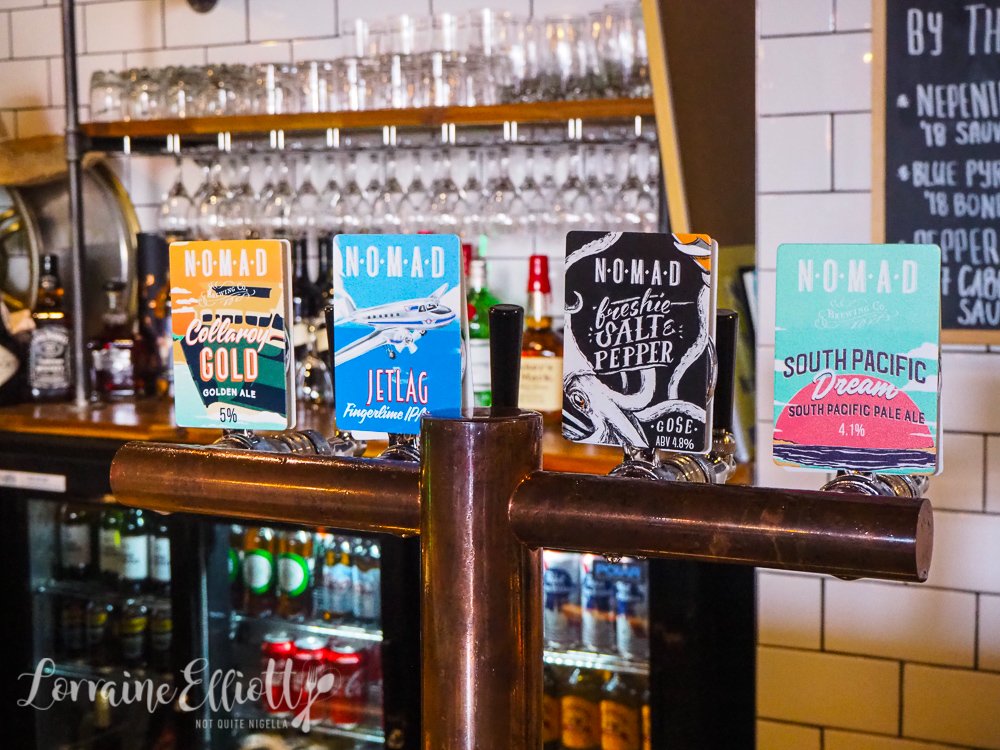 Chef Ahmed Kalil is from Modesto, California and he used to work in marketing at General Motors. This is his first food related venture. He moved to Australia in 2009 and he started off doing informal wing parties for friends. What started as 1 friend grew to 5, then 8 and then 14 and then neighbours he didn't even know were showing up at this house for wings. 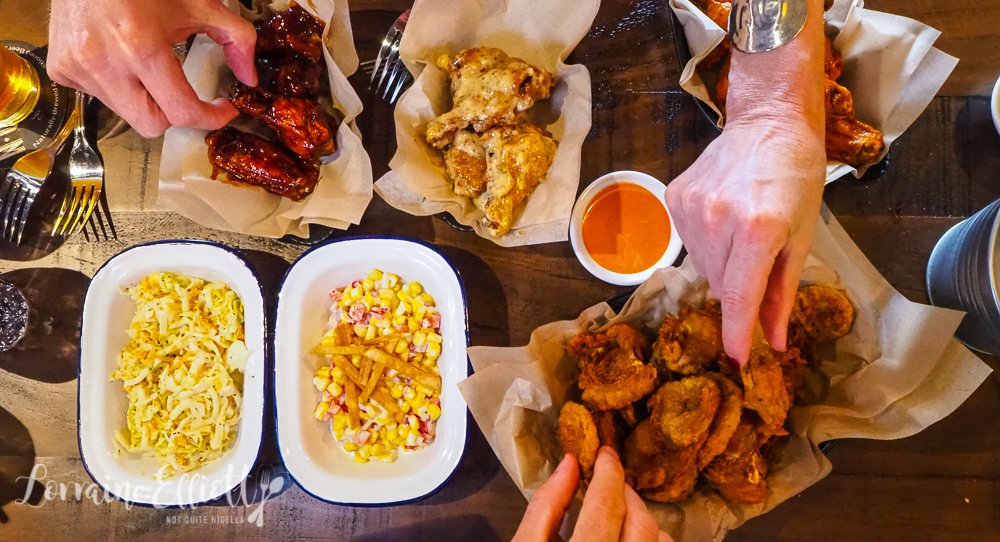 He is stickler for authenticity-the burger buns are imported from New York and the pickles are real American crinkle cut pickles. Prices are very reasonable, like American prices. He is very modest and friendly. 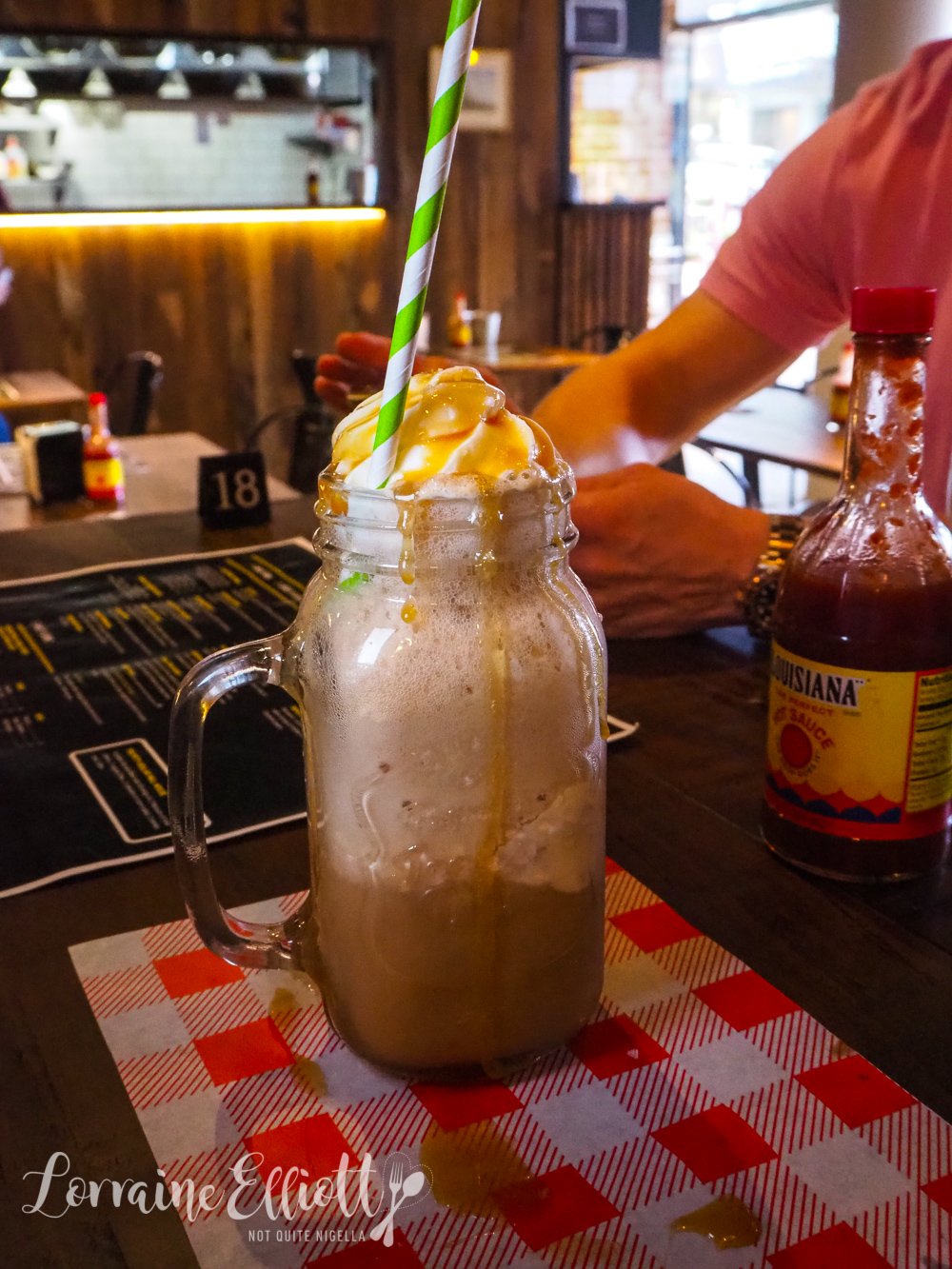 My root beer float arrives and it's enormous. It's cold, fizzy and creamy and just about everything that you'd want to toss back with a half dozen wings. 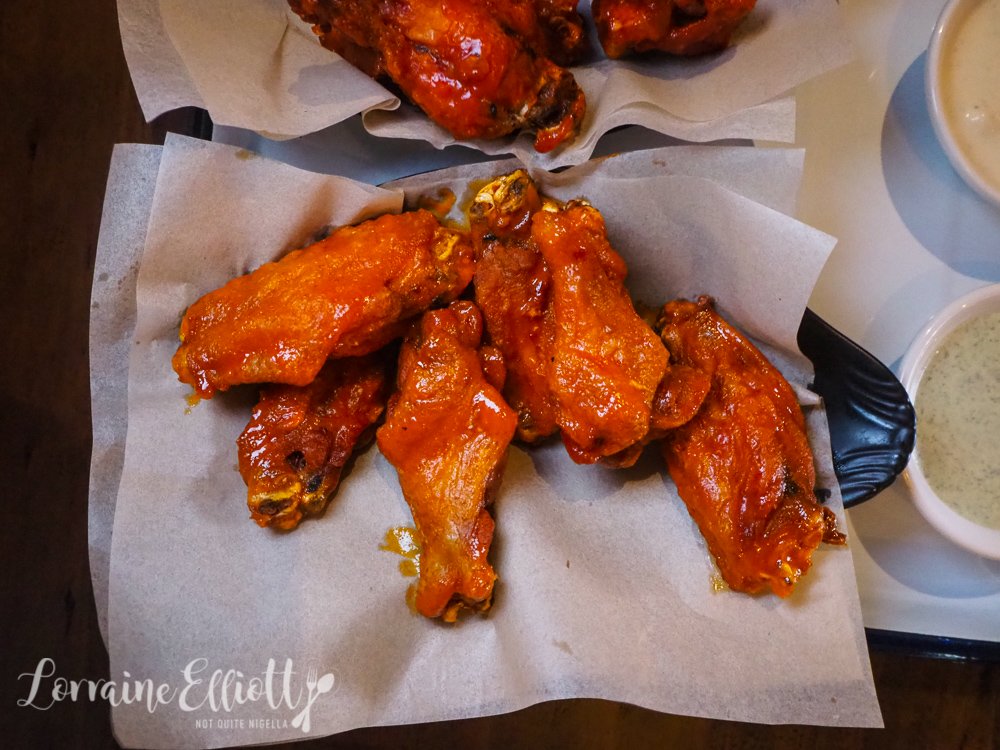 Oh that brings me to the wings. So American wings are single wings, not the double ones that you tend to get here. They are deep fried and served with a hot sauce and blue cheese dressing as well as celery sticks. These original buffalo wings send Ivy and Ryan into raptures from the first bite - I even think there's some swearing. Suffice it to say that these are the real deal. 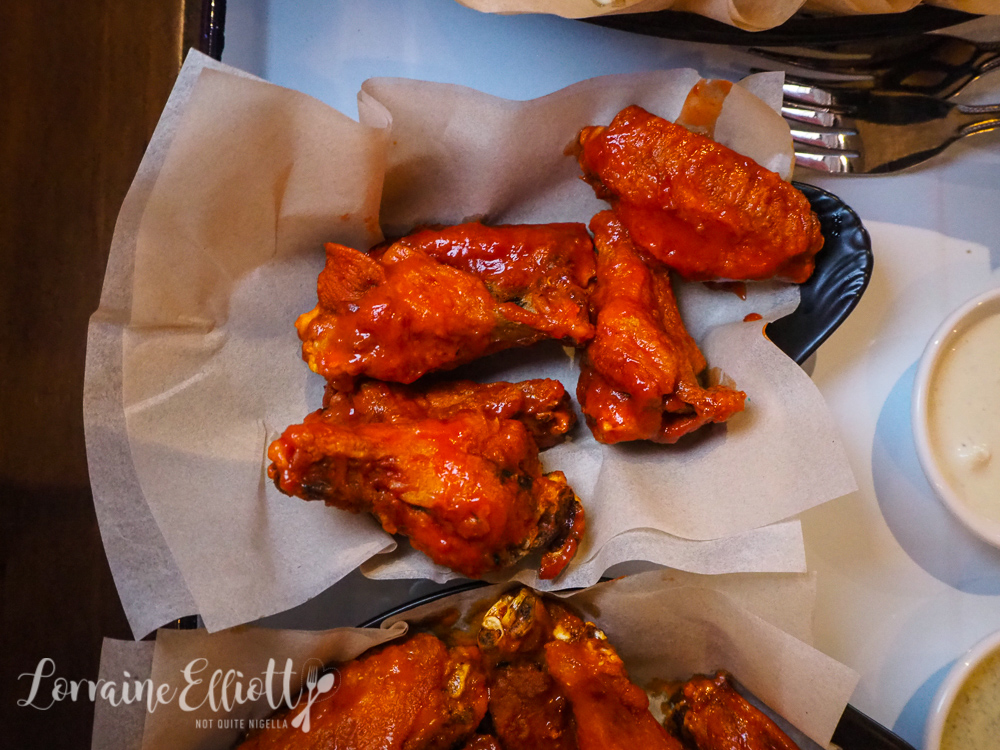 The "hot hot" wings are made with a combination of habanero and ghost chilli peppers which gives you an indication that these are hot indeed. Not fiery hot and intolerable like the ghost pepper wings at Wings X Tins (which seem more a death defying novelty). There's a definite, strong kick but they're not self defeating. 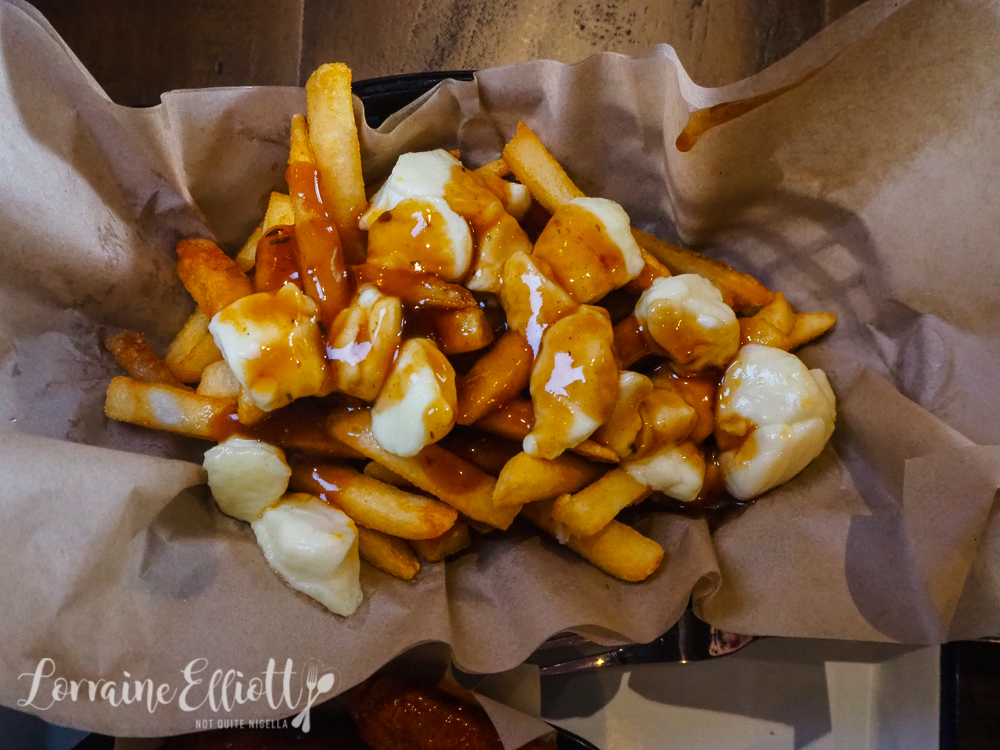 What's a border between countries? I adore Canadian poutine and this one has soft, squeaky cheddar cheese curds (yes real cheese curds!!) and just about the most perfect rosemary and thyme gravy. "That's Thanksgiving dinner gravy right there," says Ivy while I devour half of this serve. 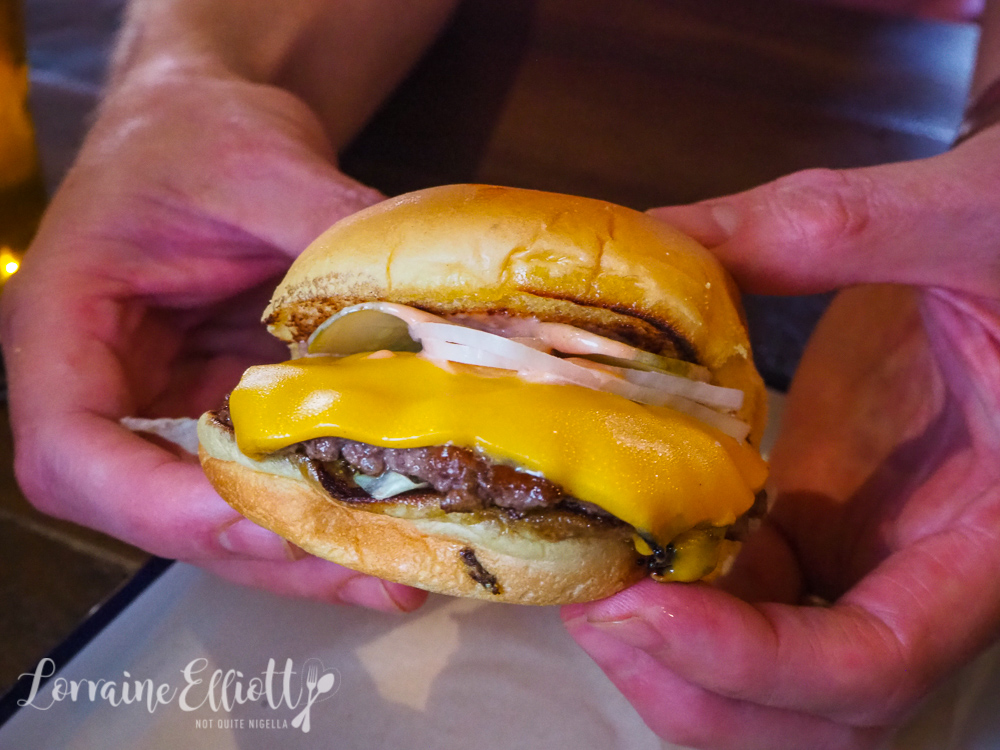 American Smash Burger one x one $9

Round Two! Ryan gets up and orders again because now he's Ahmed's best buddy. You can order the American smash burger with either one or two patties and given how many wings we had ordered we went with the single patty. It's has a seasoned beef patty, melted American cheese, lettuce, tomato, thinly sliced onion, pickles and mill (aka burger) sauce on a potato bun. It's like an In-N-Out burger but better. The bun is soft perfection melting into the patty when you bite into it and we wish we had order two. 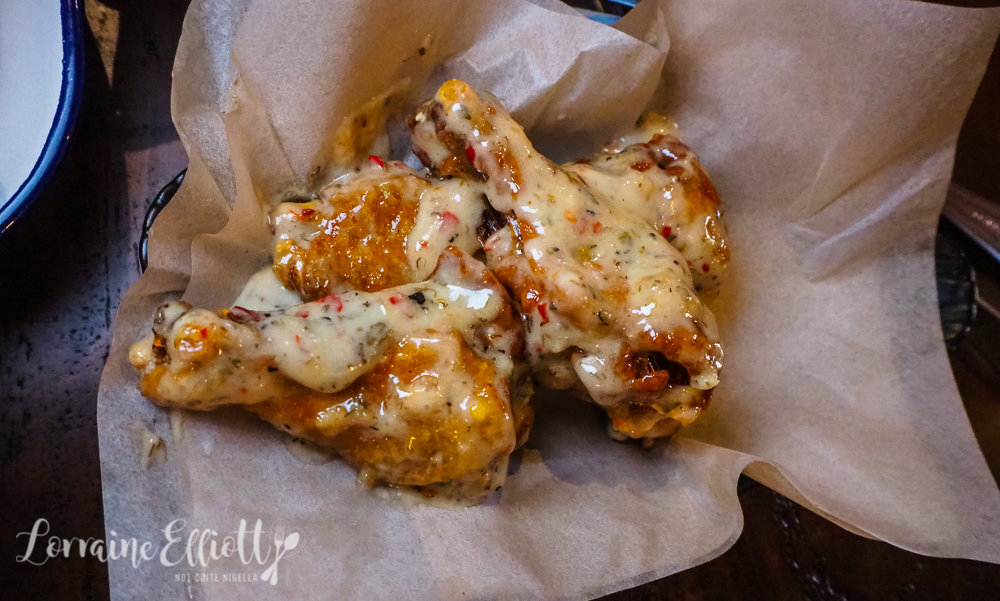 Hands down my favourite wings (I do tend to like saucy wings) are the garlic parmesan made with roasted garlic and parmesan cheese served in a creamy sauce. It's intensely flavoured and I just love that creamy sauce against the crispy wings. 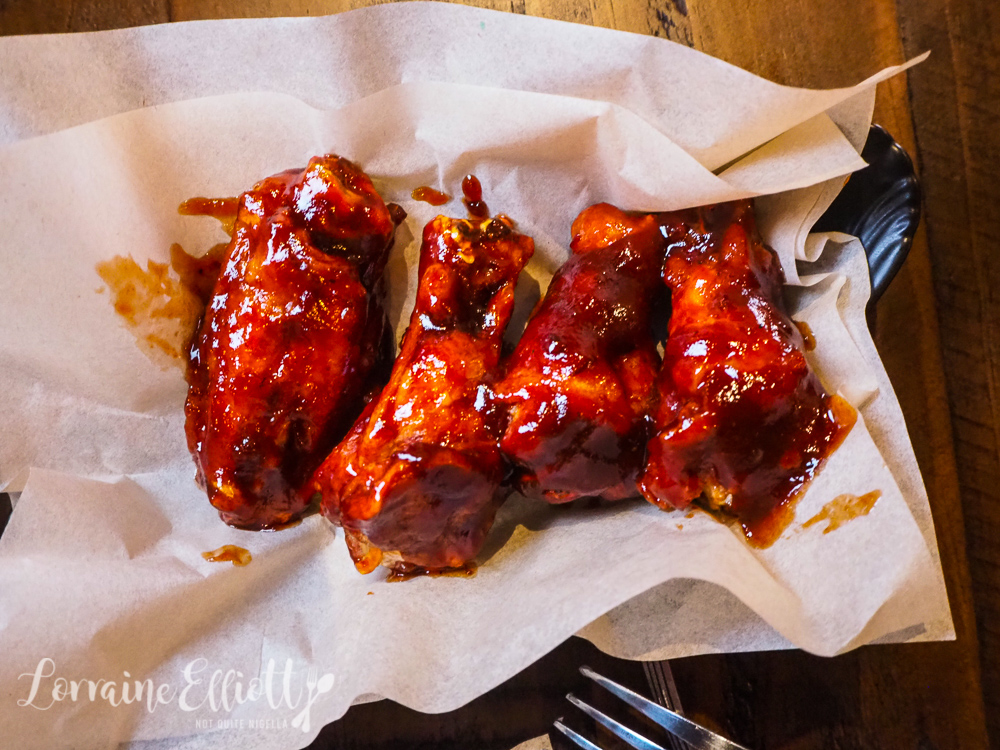 These are more the bbq wings that Australians are more familiar with and they describe it as "American BBQ meets smoked chipotle peppers," with the sweetness of honey. I also liked these because of the saucy quality of these where Ivy and Ryan like the drier texture of the original buffalo wings. 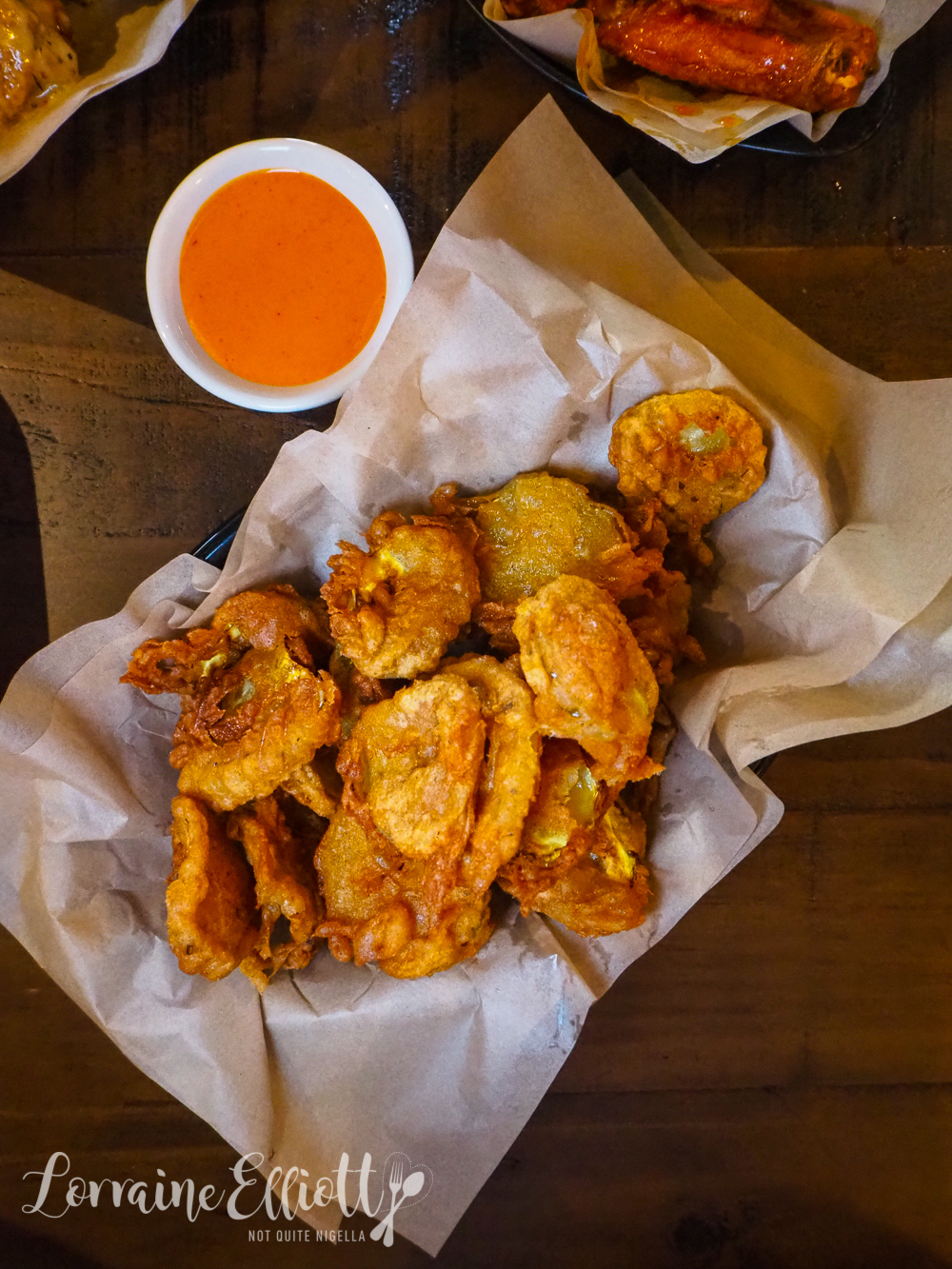 Ivy is very excited to see the Georgia frickles aka fried pickles (she's from Georgia y'all) and these are American crinkle cut pickles that are battered and deep fried and served with a Sriracha mayonnaise. They're crazy moreish and we also dip them in the blue cheese dressing ($3) and my favourite, the herby ranch dressing ($3). 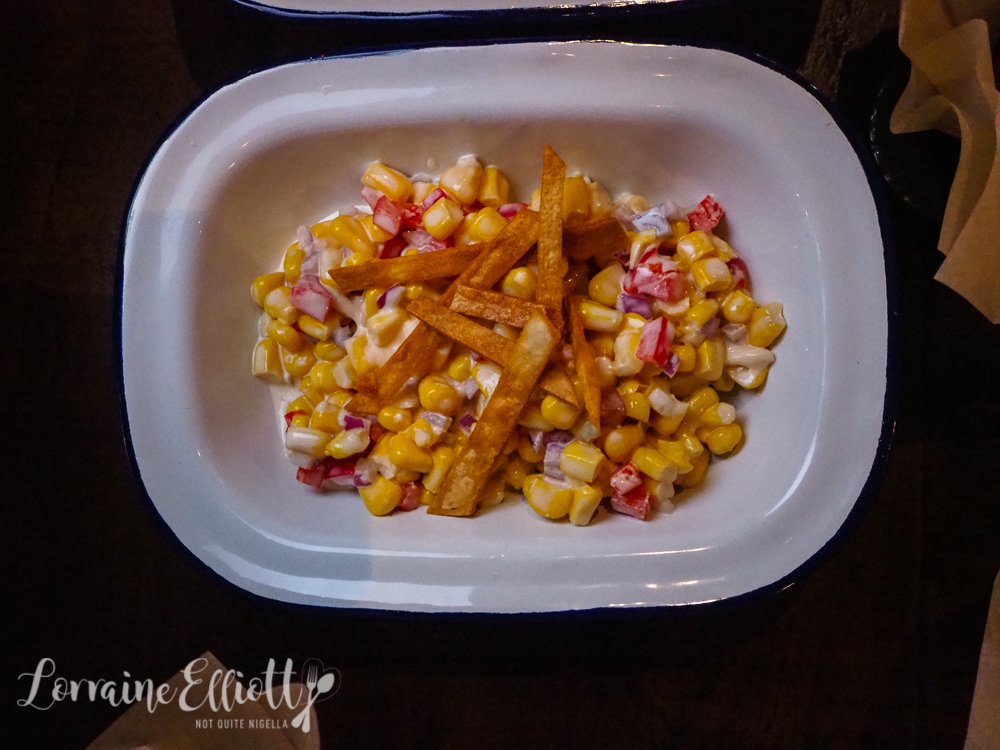 You do need some veggies when you go for wings and I loved the salads as much as the wings. The corn salad is simple but so tasty. With juicy corn kernels, mayo, capsicum and onion with crispy tortilla chips it is well seasoned but sweet from the corn. 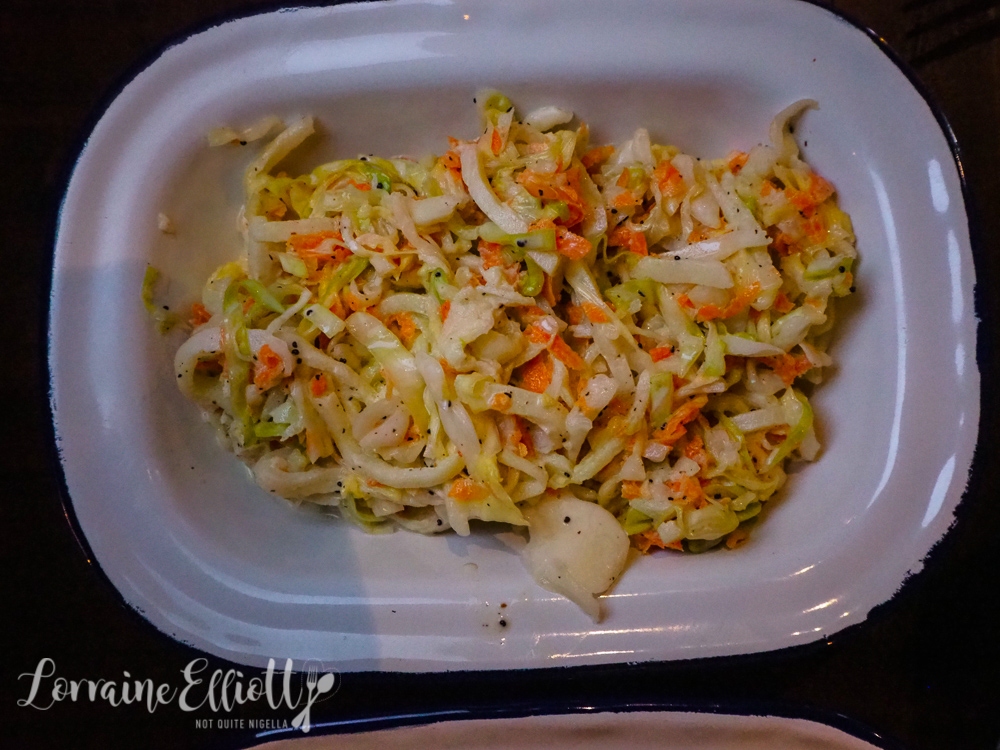 The coleslaw is made with shredded cabbage, carrot and apples with a creamy dressing. The apple gives it a fresh sweetness without being too distinctly apple in flavour. 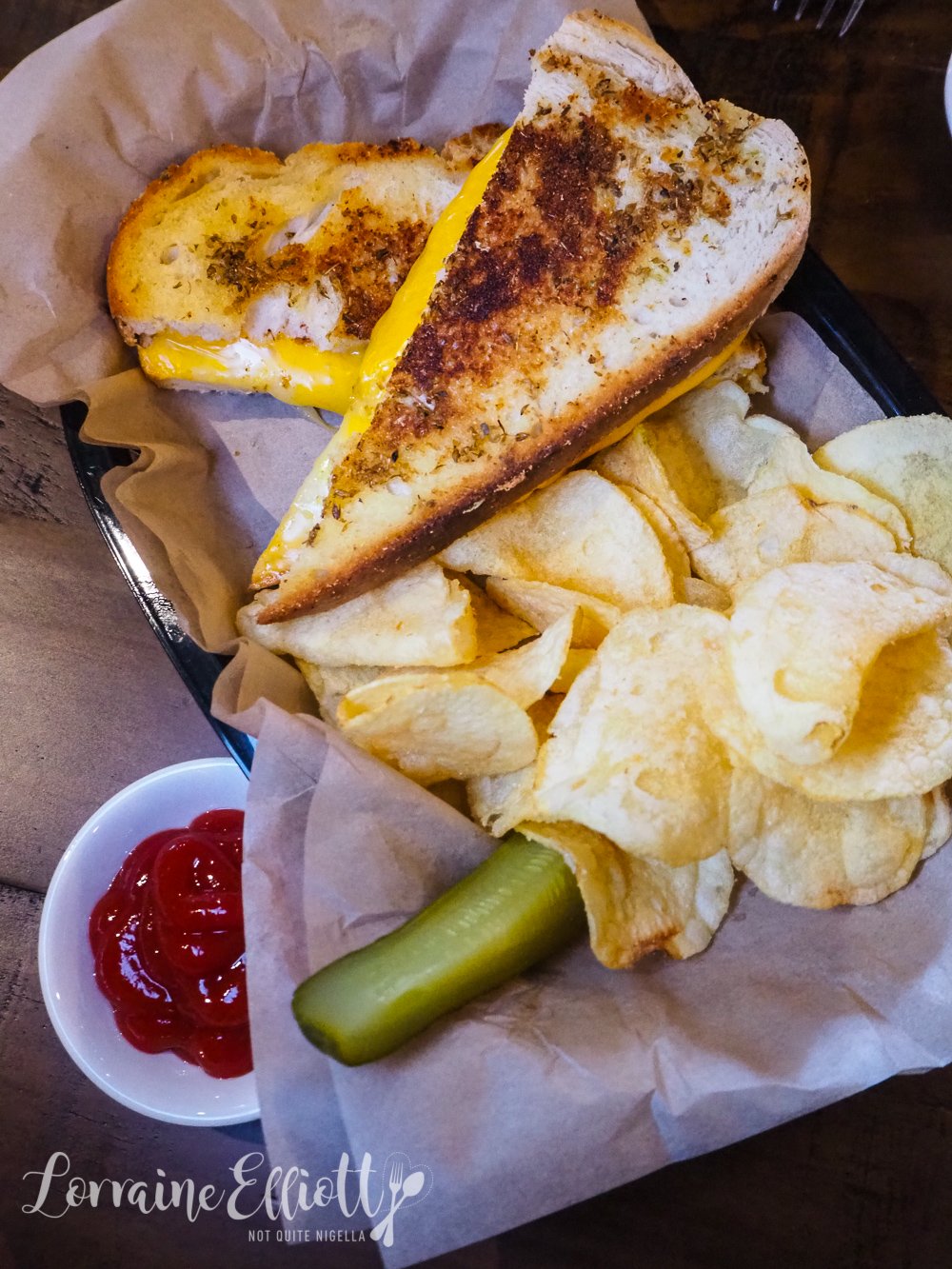 We were enjoying the food so much that we decided to order two more things: the sourdough grilled cheese made with herb crusted sourdough bread with four types of cheese: Monterrey jack, asadero, con queso and cheddar cheeses. It comes meltingly good and dripping with cheese with a side pot of tomato sauce, a pickle spear and some kettle chips on the side. 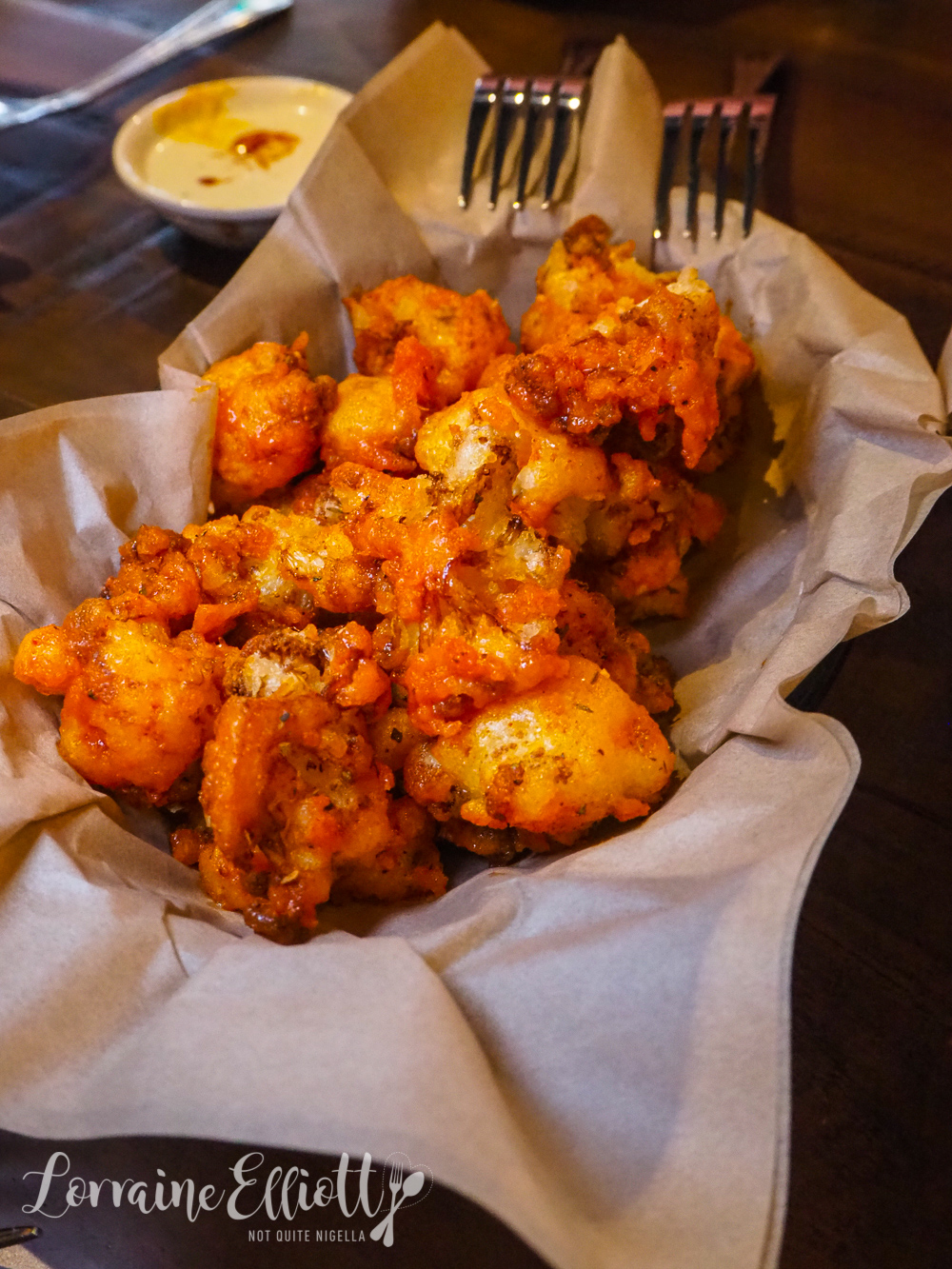 This is a choice that they designed for the vegans. It's lightly battered cauliflower "wings" or florets with a cajun seasoning and Sriracha mayonnaise. It's a pretty damn good imitation of chicken wings in terms of flavour and somewhere between the wings and a salad. 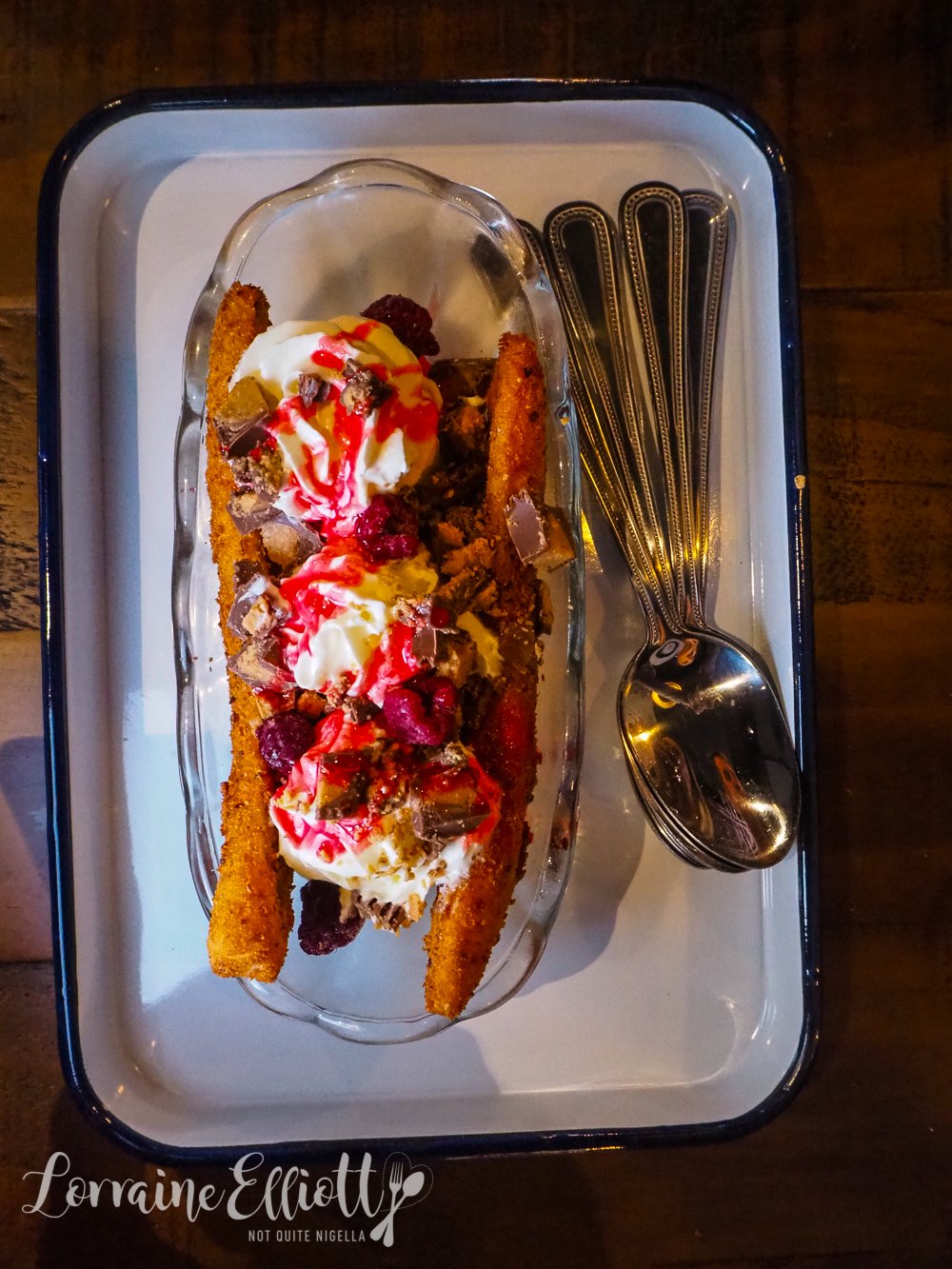 There was only room for one dessert and there are two on the menu. Ryan asks his now best buddy to recommend a choice out of the fried banana split or the brownie and Ahmed recommends the banana split. This is a halved banana coated in a cinnamon crumb and deep fried with scoops of vanilla ice cream, whipped cream, strawberry sauce and chopped up Reese's peanut butter cups. I think I'd prefer a caramel sauce to this but the two Americans at the table are smitten.

As we leave, they're already making plans to come back...

So tell me Dear Reader, do you chat to the staff or the chef when you go to a restaurant? Do you have a favourite wing sauce? Do you prefer them saucy or drier?