The Fast, Flaming and Furious at Wings X Tins, Darlinghurst! 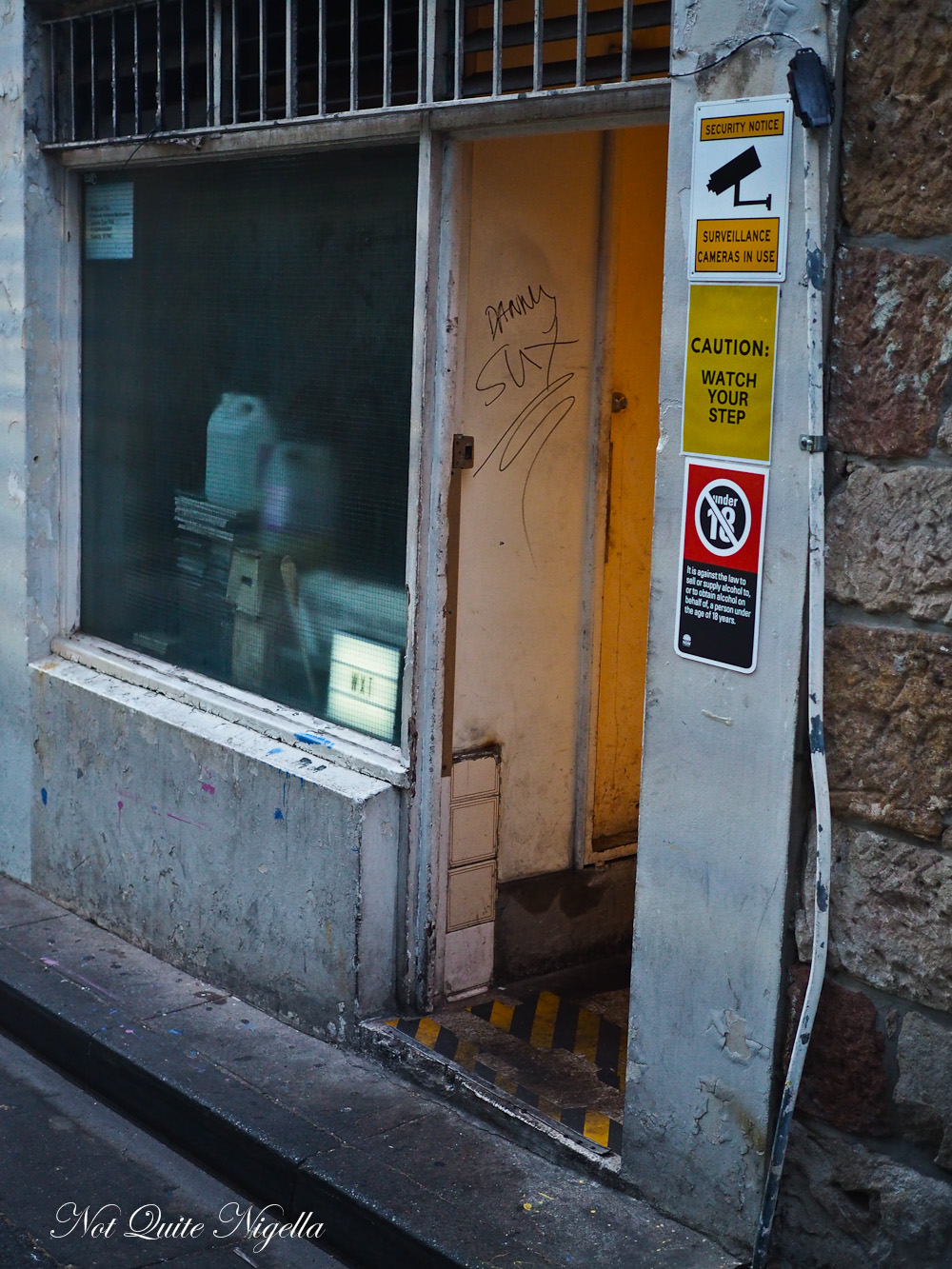 Wings X Tins is an unabashedly simple concept - beer (tins), seven types of chicken wings and six types of fries are what is on offer at this instantly popular place slightly hidden away on Chapel Street in Darlinghurst. And the best time to go? Well Wednesday nights for half price wings and a chance to play roulette with the Carolina Reaper chilli! 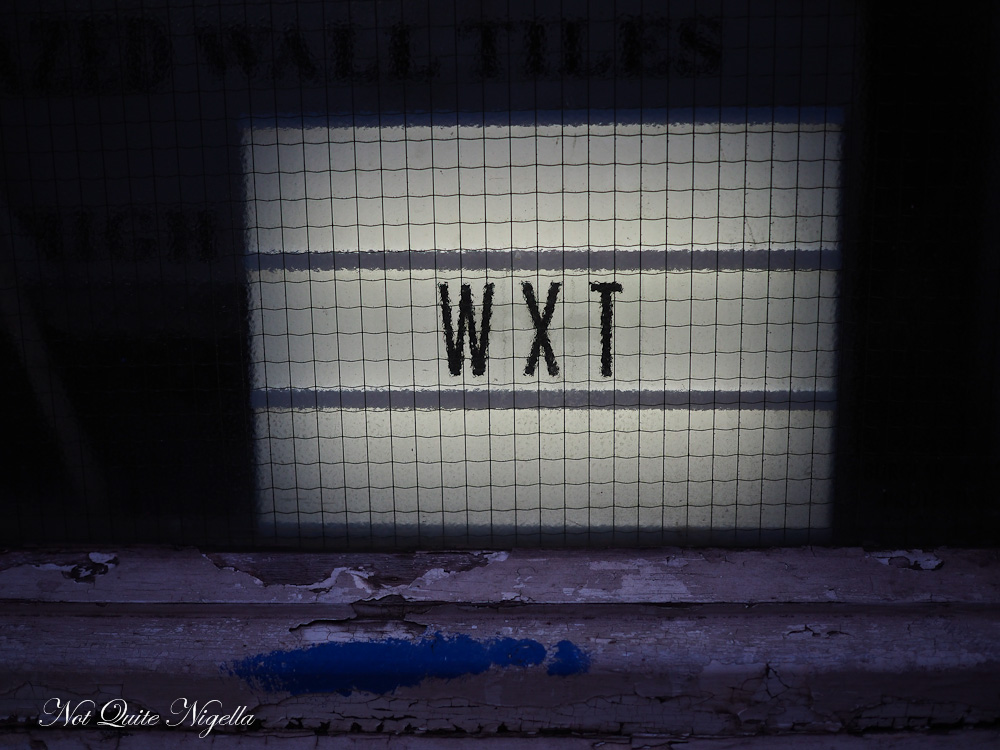 Wings X Tins is brainchild of Anthony MacFarlane and Alfredo Perez. When we arrive at 6pm we have our pick of booths and tables. But by 6:30pm it will be standing and waiting room only as people follow the discreet sign outside, past the toilet and up the stairs. There are no bookings and on Tuesdays there are half price tinnies and on Sundays there is reggae with $10 Ceasars. 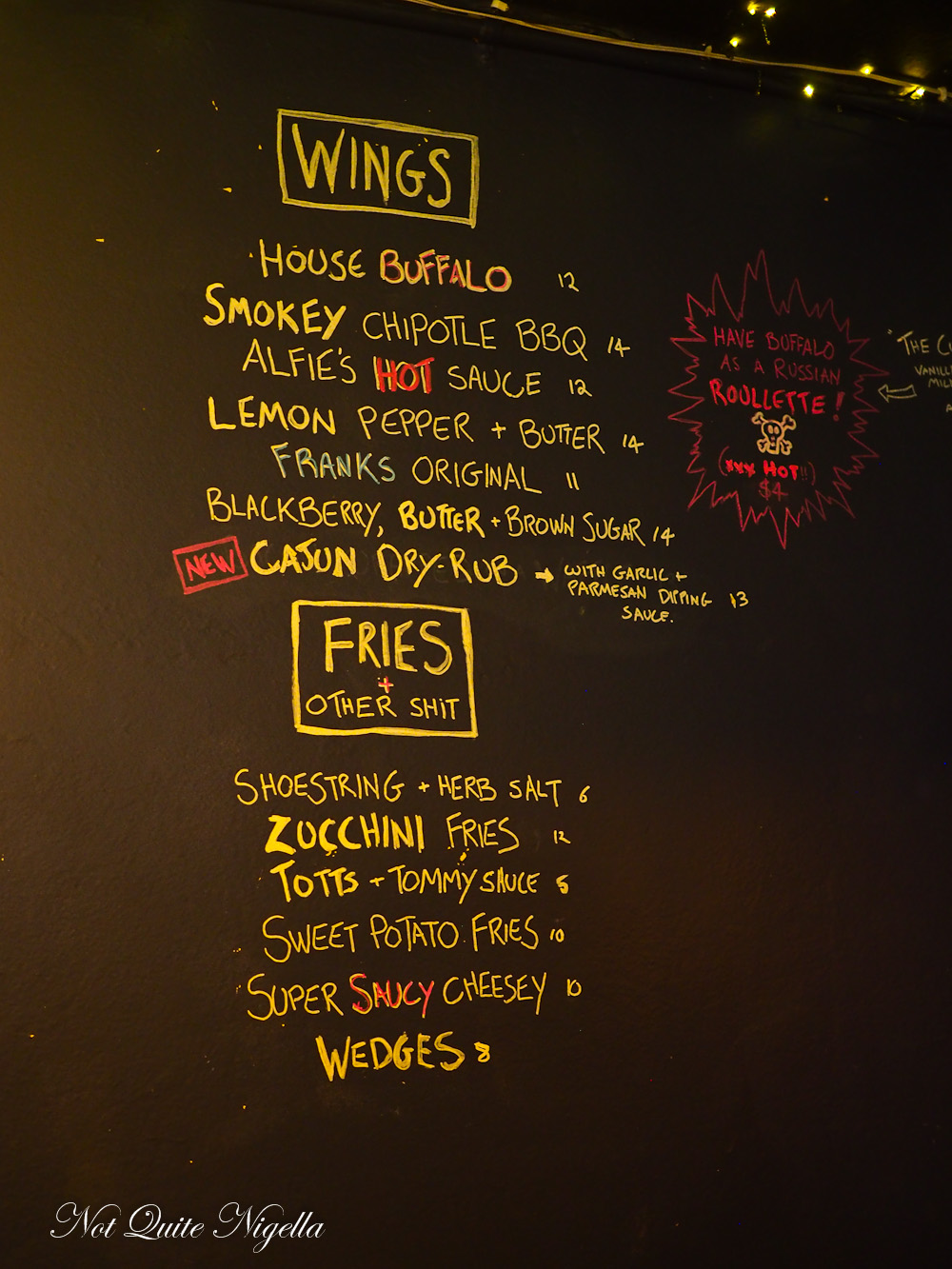 The booths are designed for easy wing and beer eating. There are metal canisters to deposit the bones and used tins but alas 8 month pregnant Louise is unable to slide into one so we take a seat at a table playing music videos with a soundtrack of the 80s and peruse the menu. 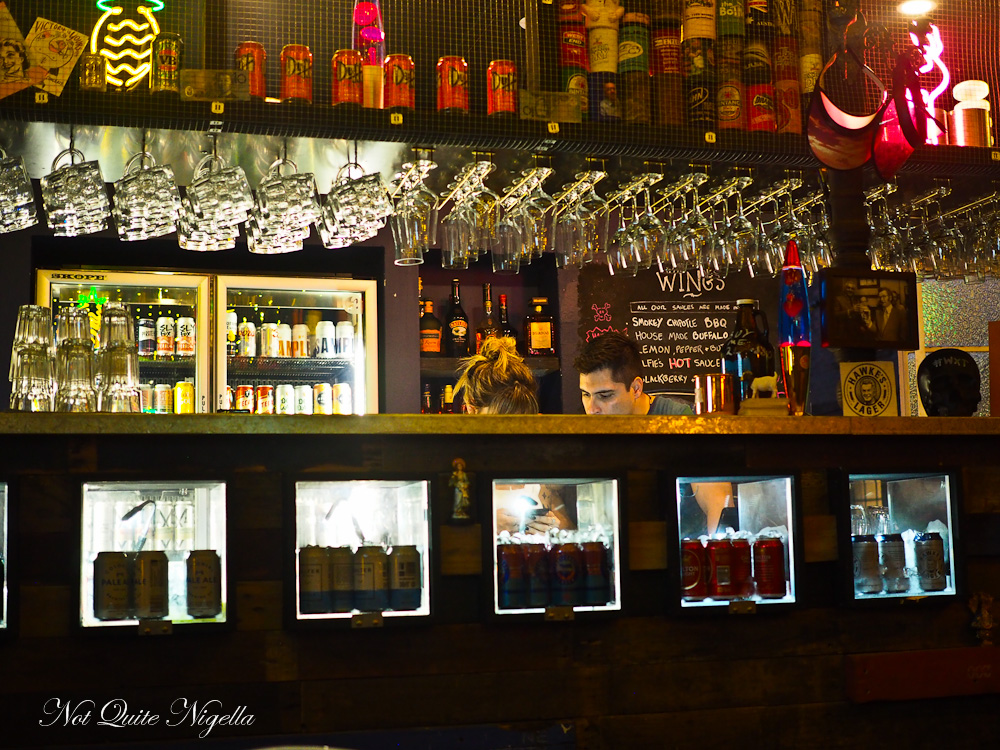 With half price wings that means that between the six of us we can really try all the wings and most of the fries. Beers and ciders are ordered - tins of Hawke's Lager bearing the former Prime Minister are sheathed in stubbie holders and we order a range of food with the super friendly, helpful staff. 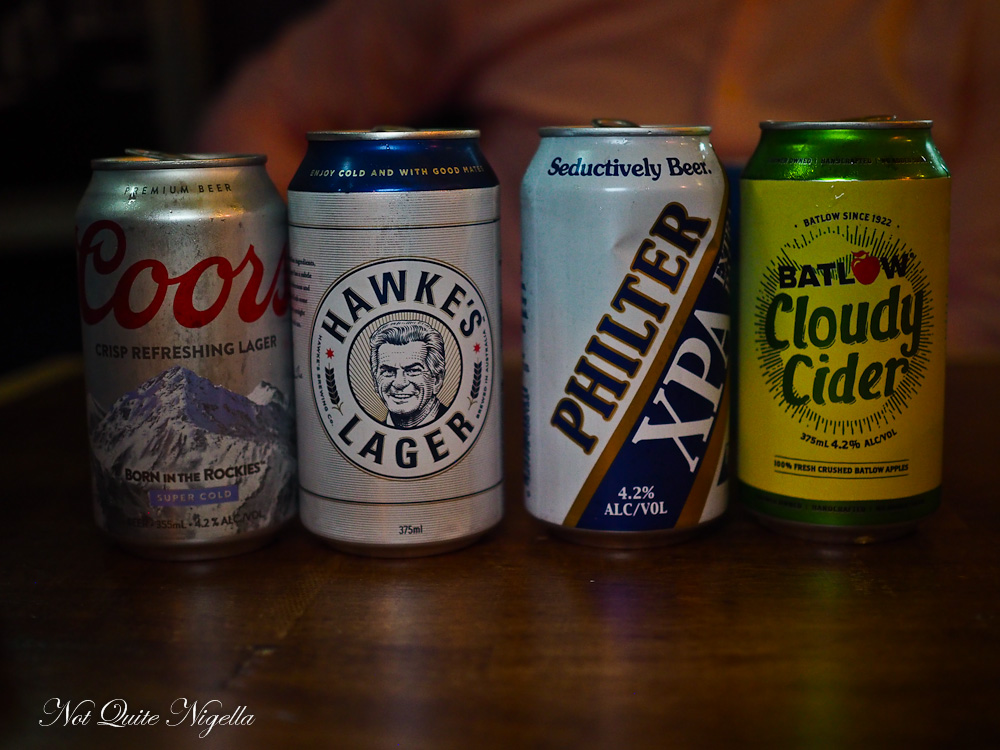 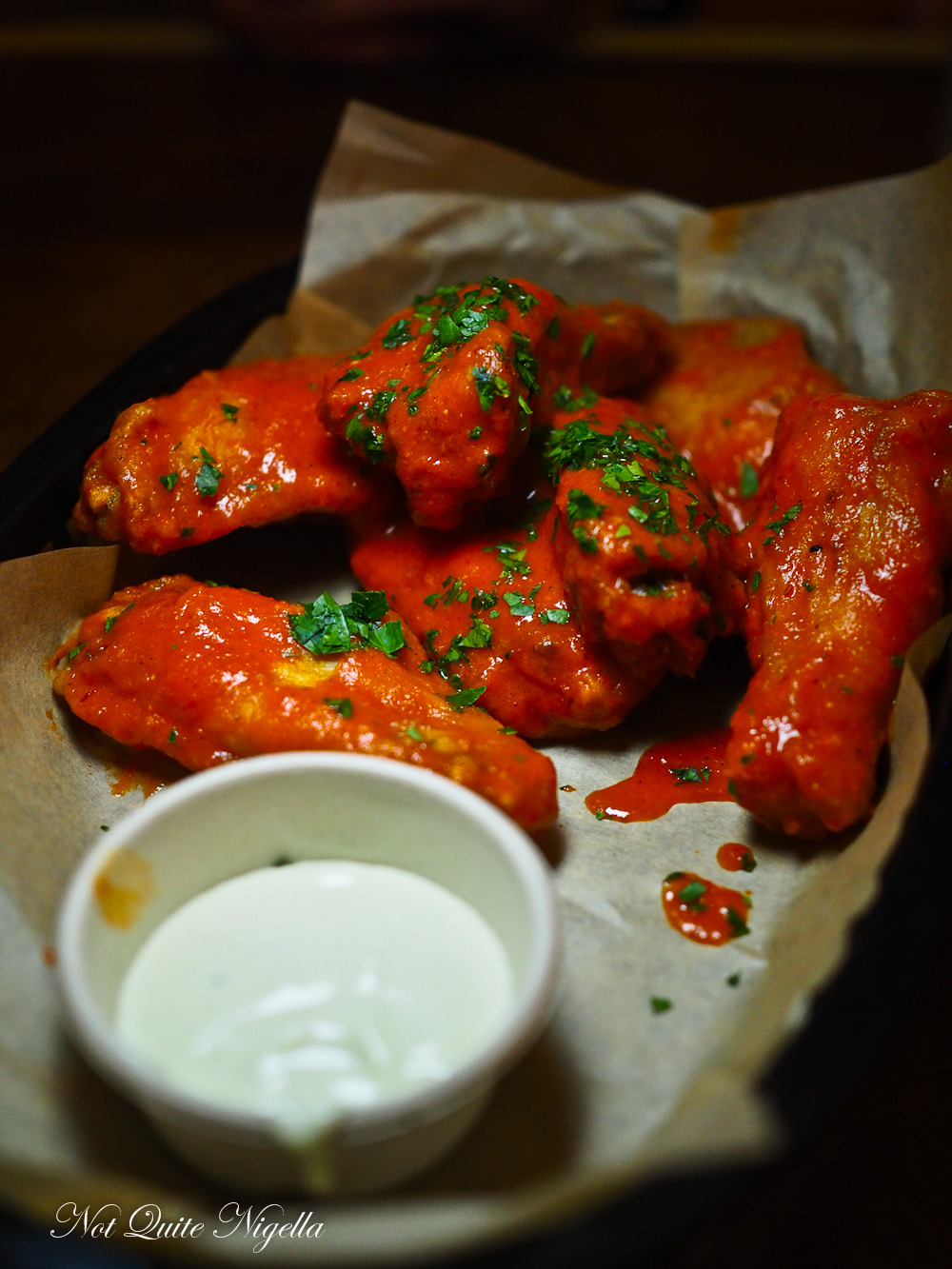 Our food starts arriving quickly along with two enormous brown paper towel rolls. We start with the saucy Frank's original wings served with aioli. They're juicy as hell and enormously enjoyable. 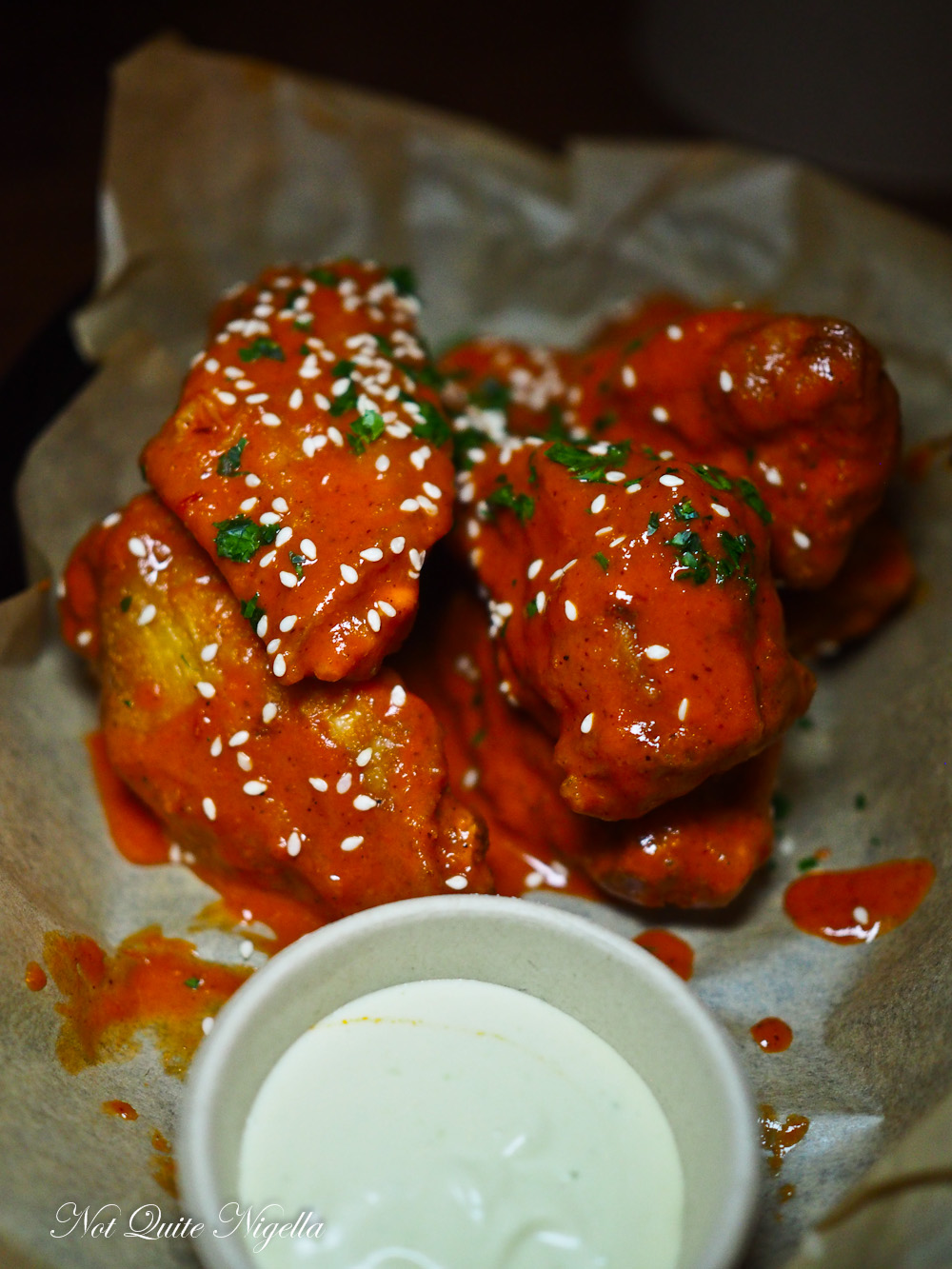 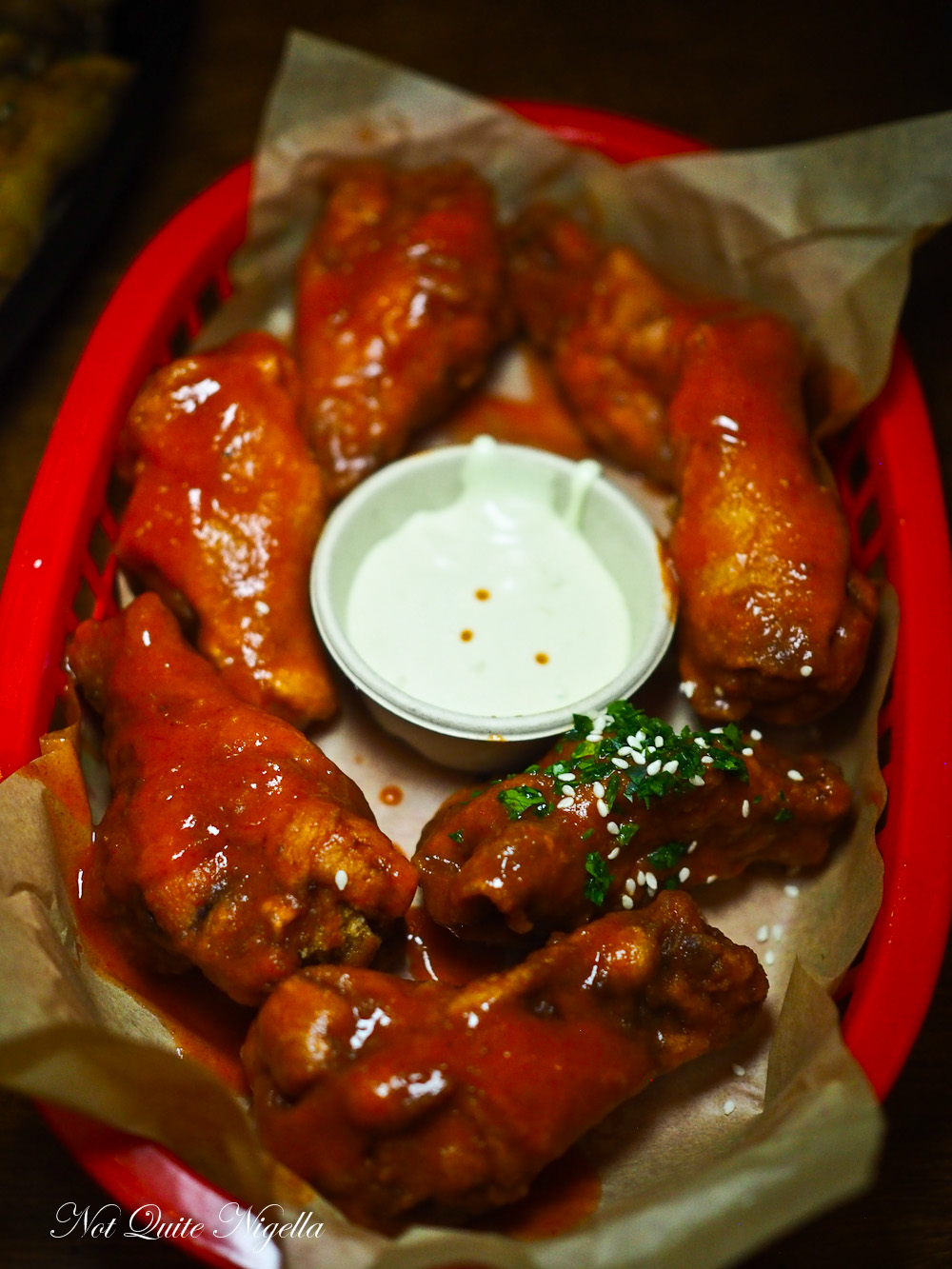 "There it is," says Ivy who hails from Atlanta, Georgia in the United States. She looks at her husband Ryan and they both look like they're in heaven. These tangy, vinegary, saucy wings are just like American style wings and are served with blue cheese sauce. 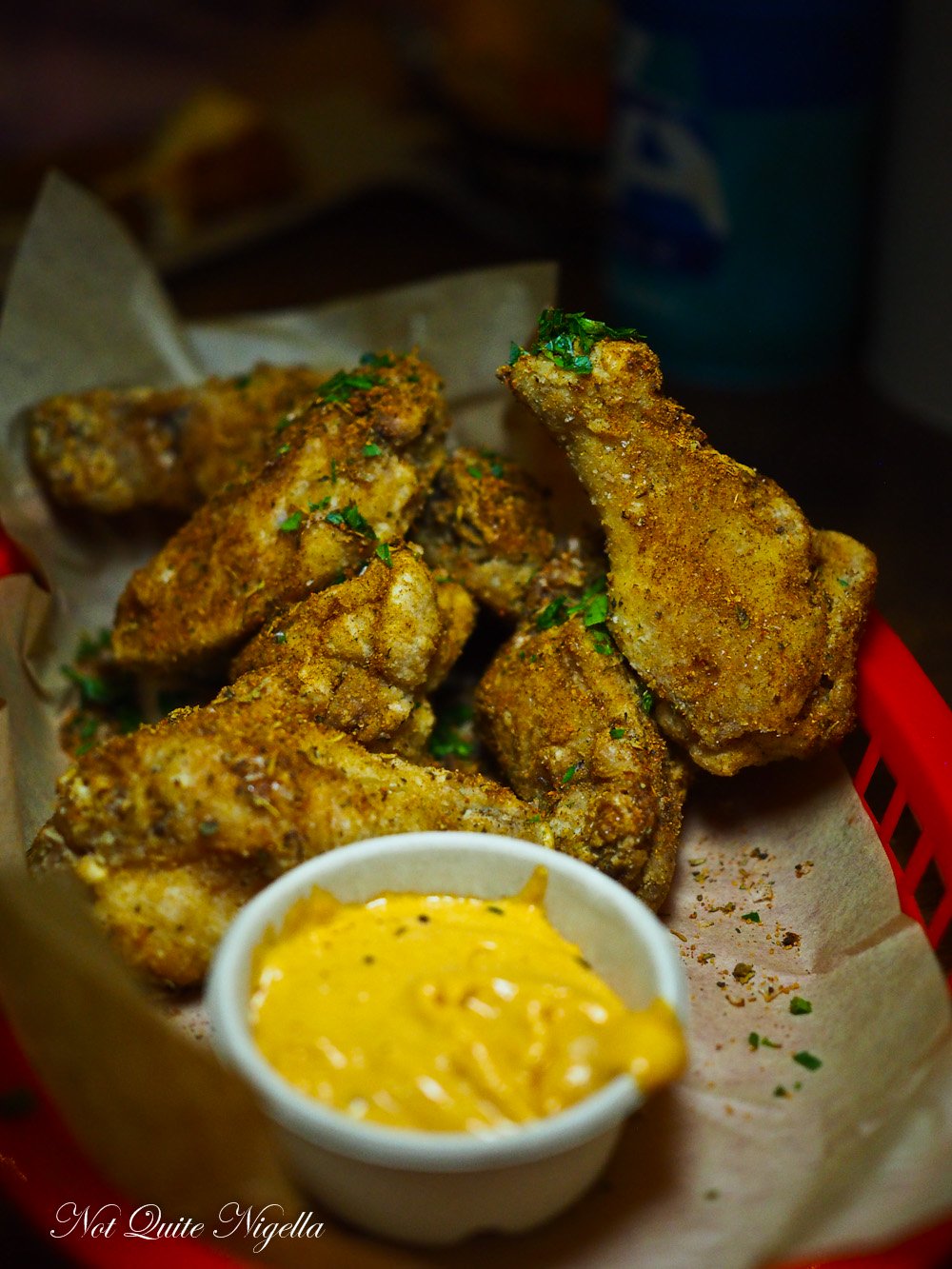 Now Ivy and Ryan being Americans seem to prefer the saucy, more vinegary wings but Ivy also really likes the spicy Cajun dry rub which I also really like. What we all commented on was how different each wing type was and once they set them down you knew exactly what they were just from the smell. 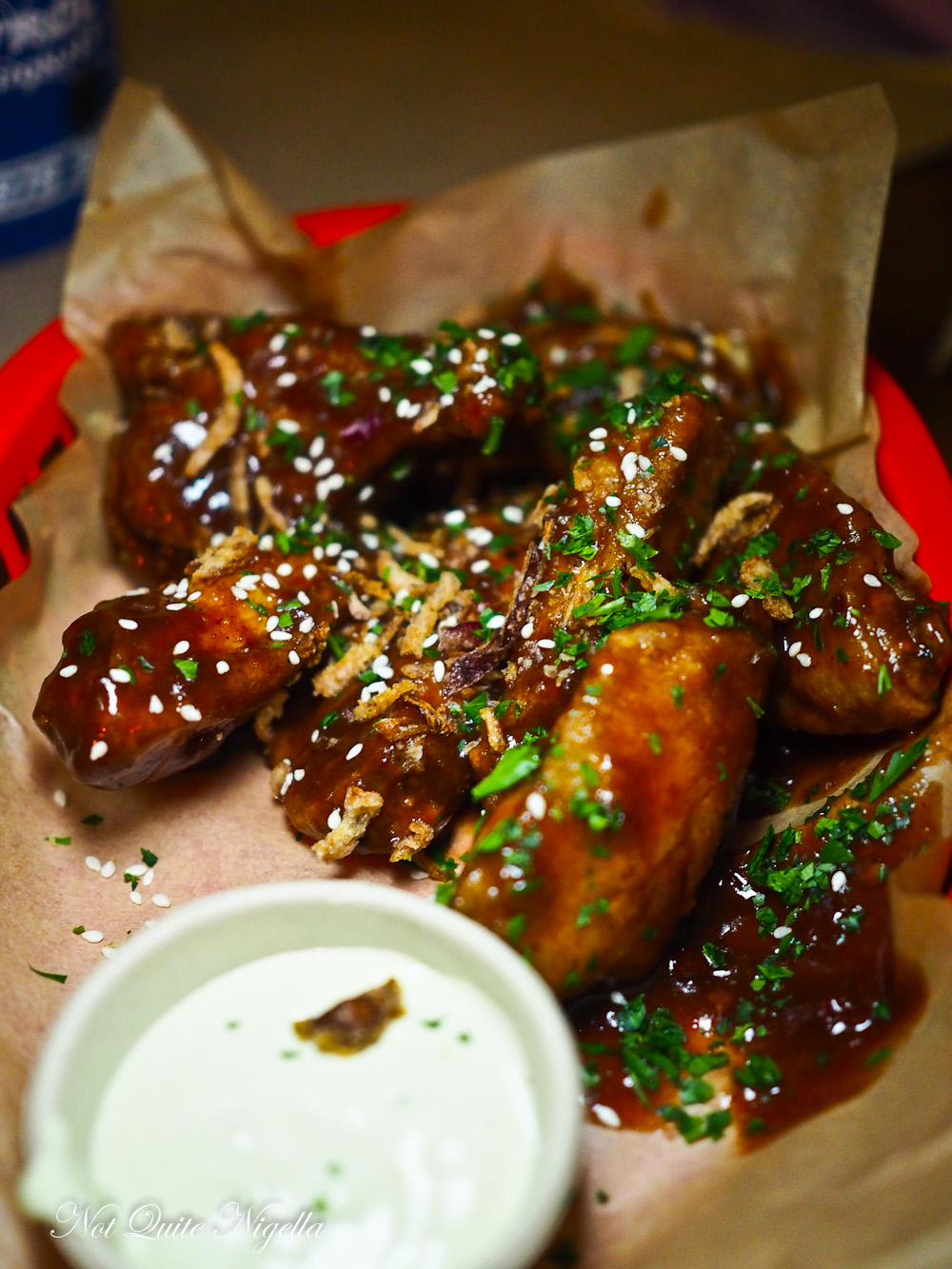 Likewise the smokey bbq wings were saucy and smoky and provided yet another iteration of a wing that we loved. The smokiness was strong but not overpowering too. 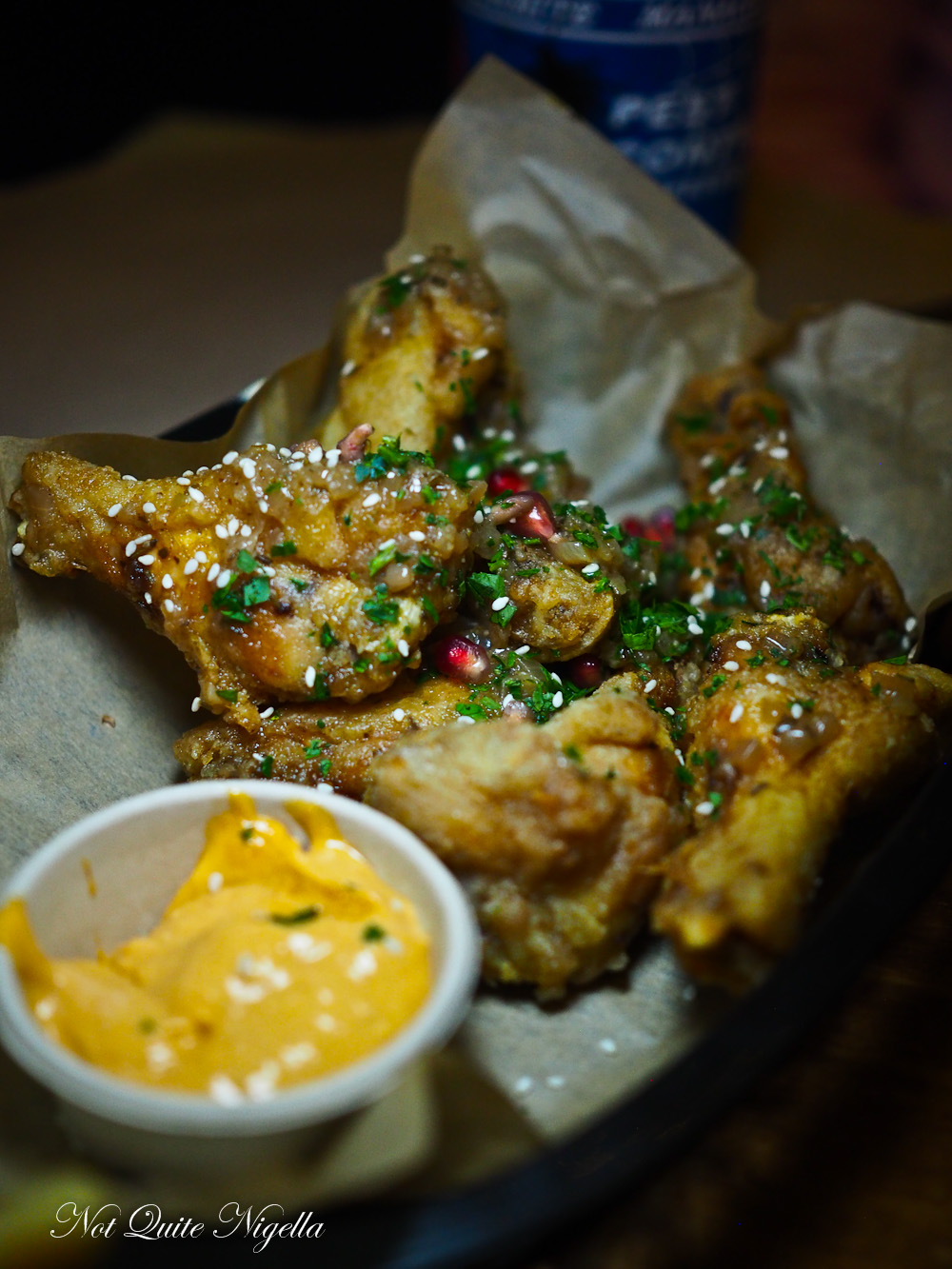 While most of the wings really were hitting the spot, there were a couple that didn't quite standout as much as the rest. The lemon, pepper and butter with sesame and pomegranate smelled amazing but seemed diluted or with less punchy flavours, perhaps after the strong flavours of the other wings. 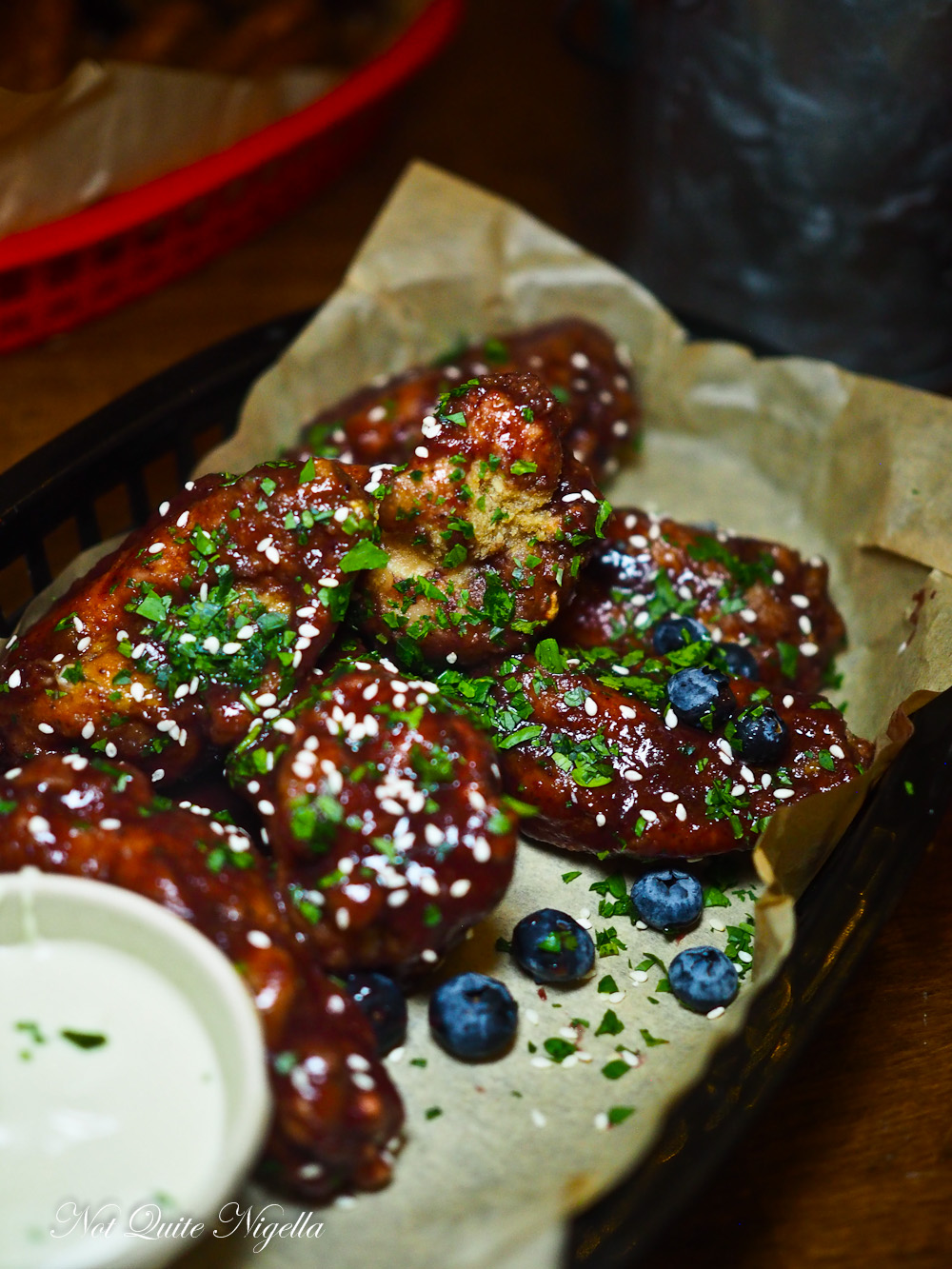 I was intrigued to try the berry, butter and brown sugar wings. They've got a touch of sweetness (and some blueberries on the side) but there is something small missing. I think all they needed was more salt on them. 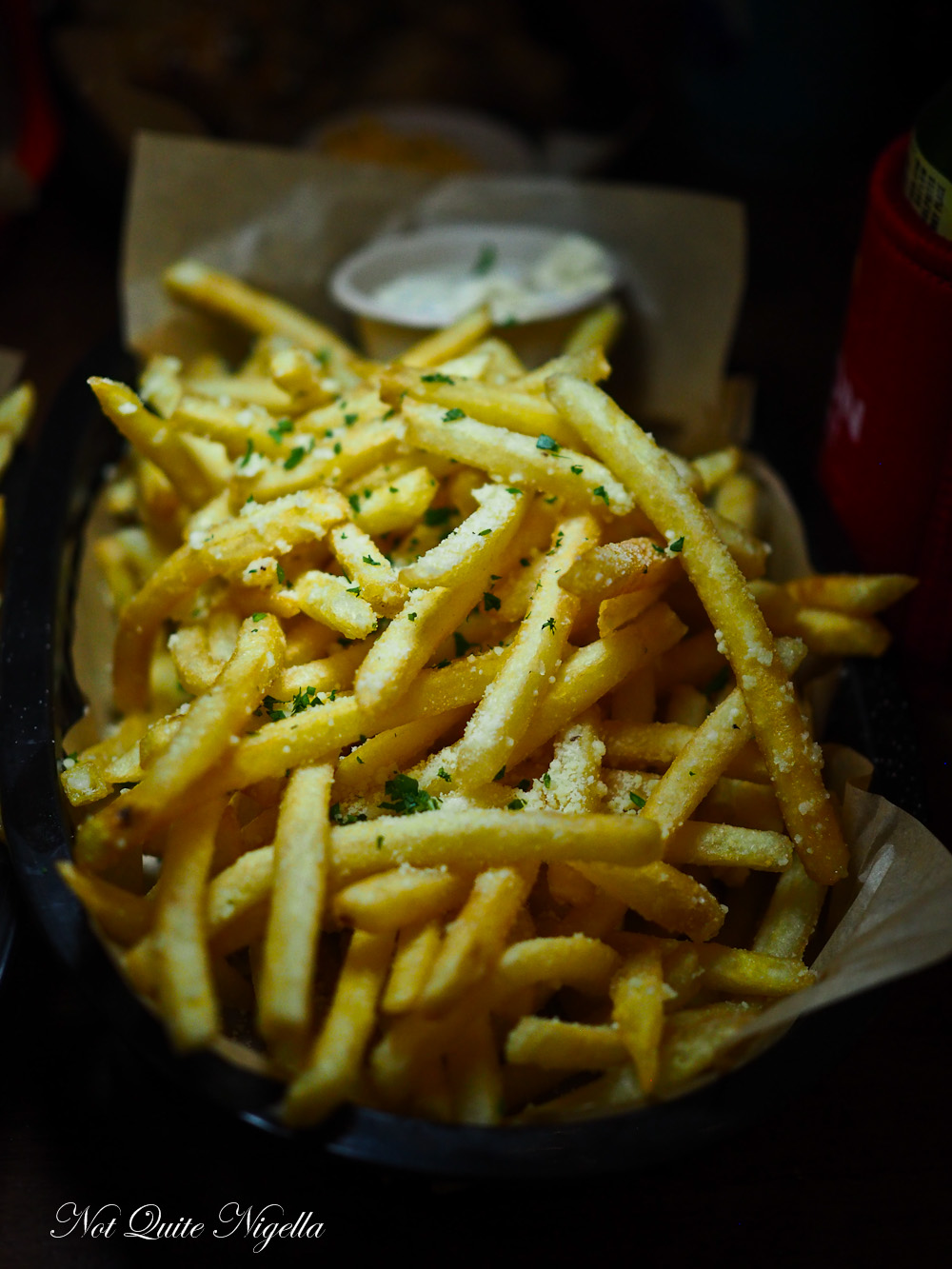 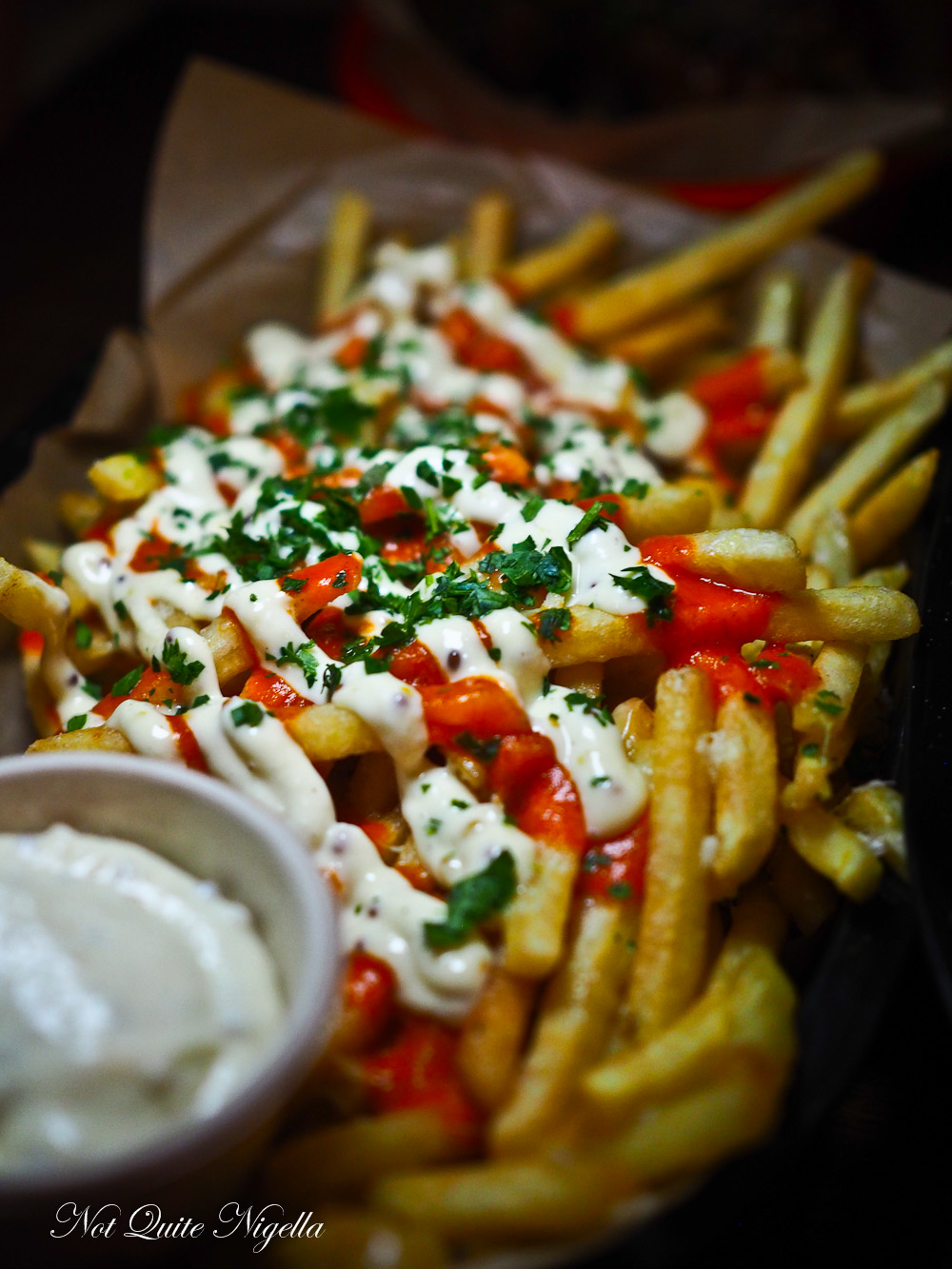 We also tried the super saucy cheesy fries. These are quite good although I think the wings are the real star over the fries. 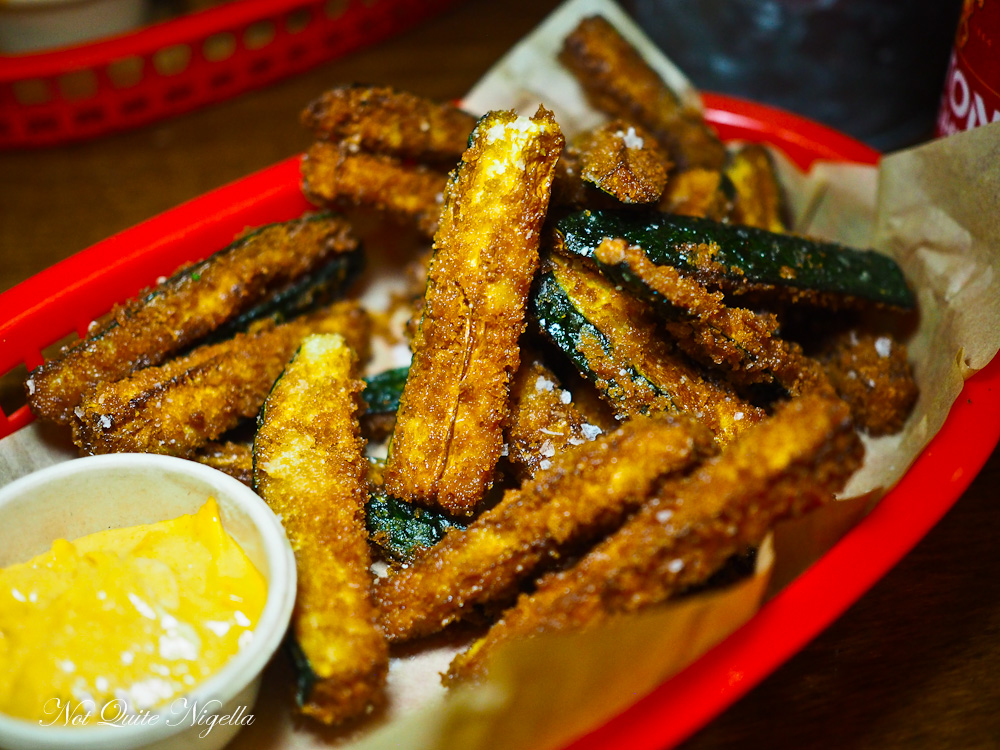 The zucchini fries are a pleasant surprise, quite crispy and they come with a spicy sauce. 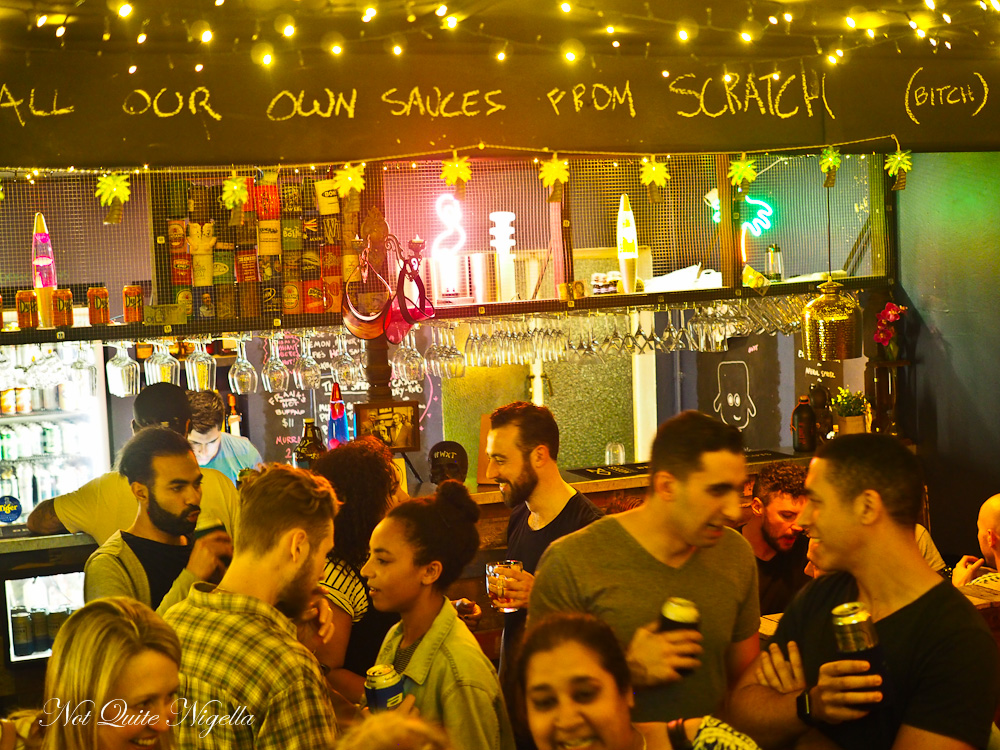 Oh I mentioned the Carolina Reaper didn't I? We saved the hottest til the last lest we obliterate our tastebuds. With a Scoville Heat Unit rating of 2,150,000SHU (a birds eye chilli is just 100,000–225,000 SHU) the Carolina Reaper is the world's second hottest chilli, most recently pipped by the Dragon's Breath Chili Pepper at 2,480,000SHU. You can have you Carolina Reaper two ways: first, there is the option to play roulette. You can have one of your wings as the "T-bone Doom Juice" wing made with the Carolina Reaper. They warn us seriously that these are not to be trifled with and the lovely waitress says, "Your pregnant friend can't eat this." She lets me know which one is the super hot wing (it's the one with the extra herbs) and we take a dainty nibble of the T-Bone Doom Juice wing. You're at first lulled into a false sense of security. And then the heat increases so that everything in your mouth and lips feels like it is on fire and only increases over the next 10 minutes. Everyone tries it except for Viggo and Louise.

We turn to the wall where there are about half a dozen names scrawled in chalk. These are the people who committed to the task and ate a serve of seven of these wings and lived to tell the tale (and those that do get the serve for free). They sell a couple of these fiery hot 7 piece baskets every night and around 30 serves of the roulette.

As we are finishing up there is a big crowd gathered waiting for a table so we leave making space for perhaps the next Carolina Reaper champion.

So tell me Dear Reader, have you ever tried a Carolina Reaper chilli? Would you play the roulette? And would you attempt the 7 piece basket of super hot wings? What food do you think you could be an eating champion of?