Road Trip Across Portugal: The Misty Mountains of Monchique 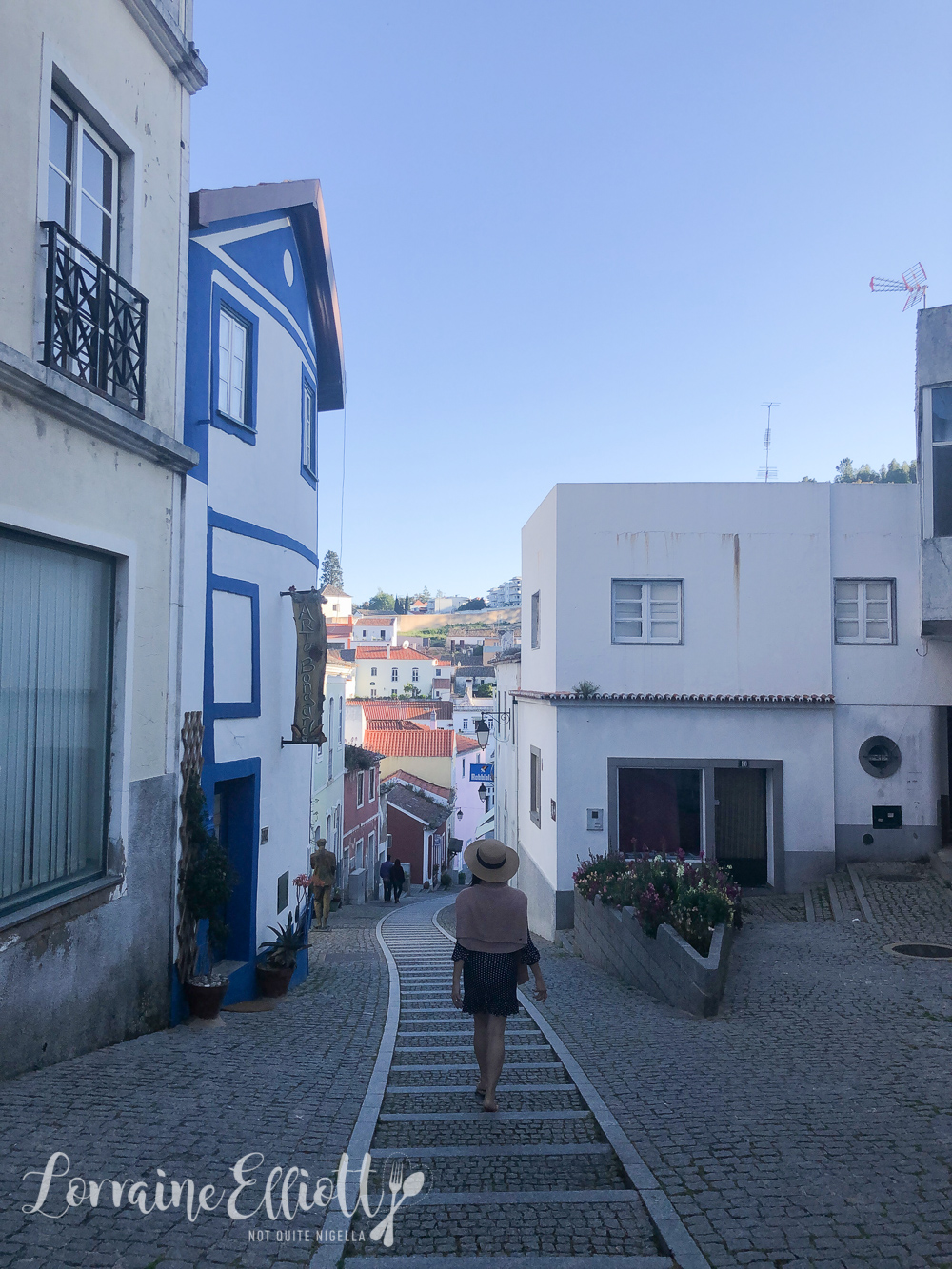 The charming mountain spa village of Monchique in the Algarve region is our first stop on our road trip driving across Portugal. To drive from the bottom to the top of Portugal takes a mere 6 hours but of course there's so much to see on the way. Over the next 10 days we'll be travelling our way across Portugal trying much of what this picturesque country has to offer! 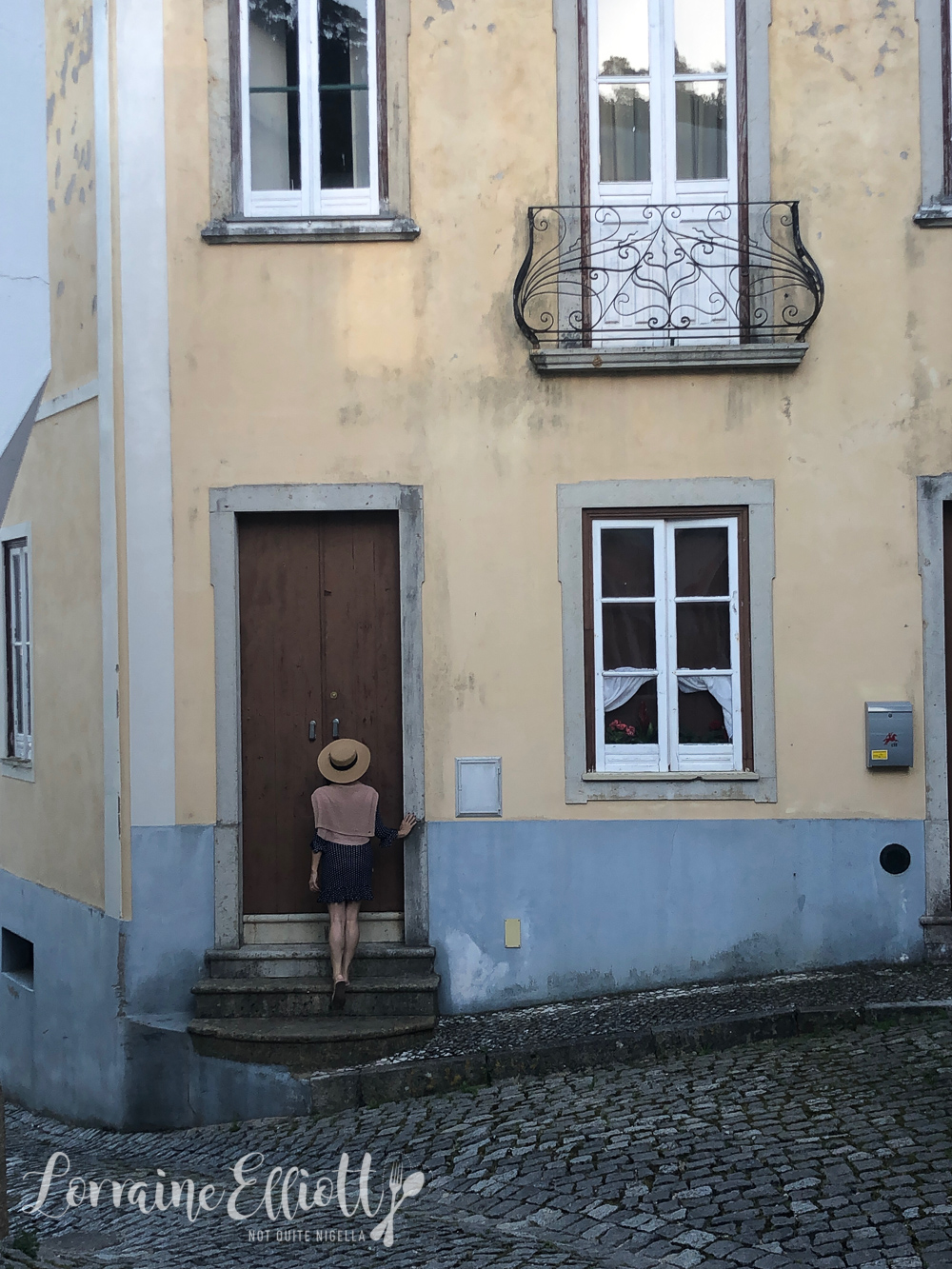 The start of this trip to Portugal wasn't a picture perfect travel fantasy. It involved Mr NQN purchasing a ticket on a different airline which we only realised when we had to part ways suddenly at Singapore Airport during transit. 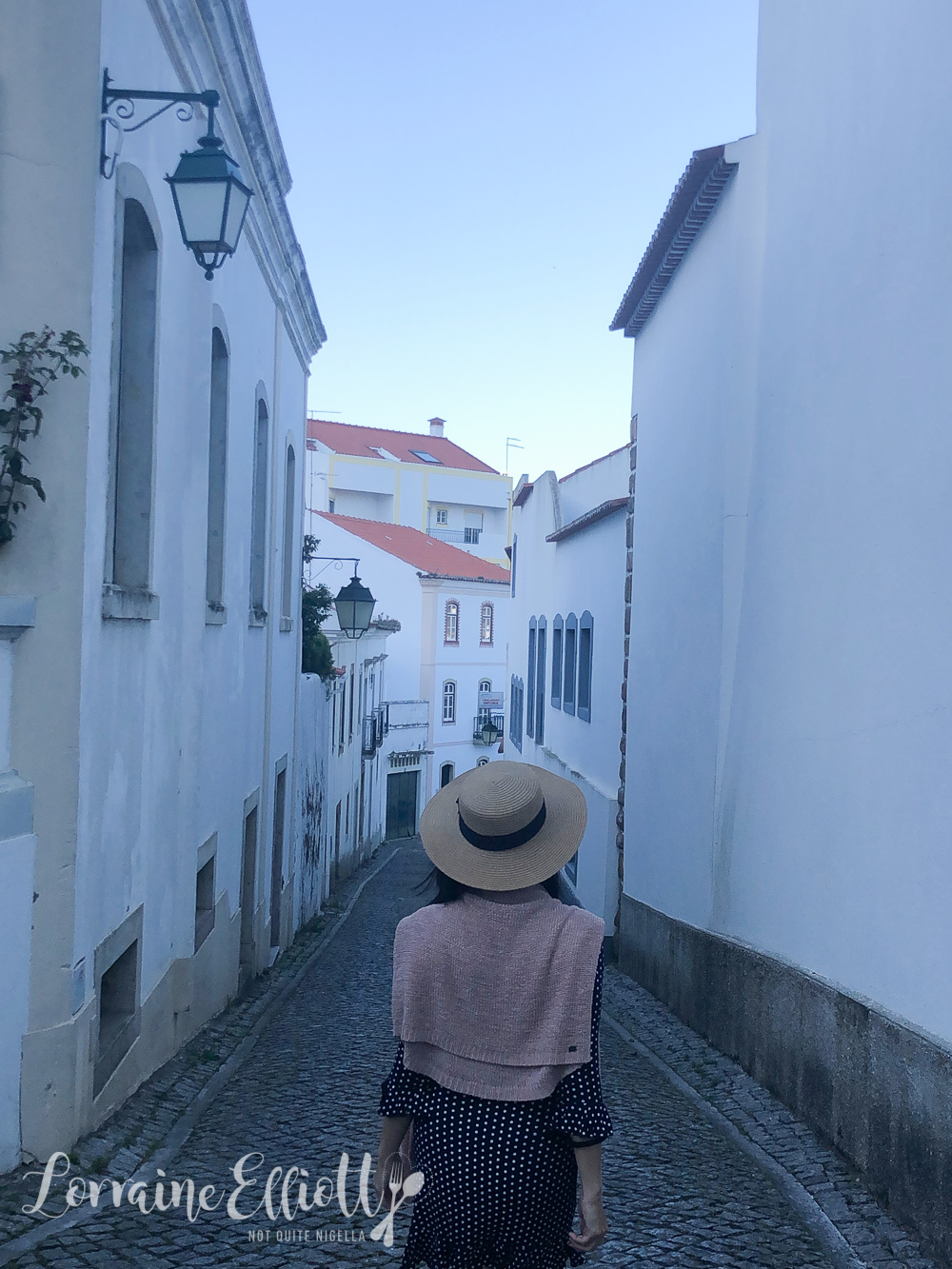 "Find me! Wait for me!" I yell out to him like a Rom Com heroine at the airport but with much more urgency and less yearning wistfulness than Kate Hudson. Then my flight was delayed three hours which meant that I missed our connecting flight to Lisbon. I forked out almost $1000 for the next flight (only business class was available, seriously!) and after we found each other again in Lisbon it was a tense 2.5 hour drive to Algarve. I was cranky, he was cranky. Tension was thick in the air and words were said and there were some F bombs delivered by me Dear Reader (spoiler alert: I swear) and I was in no mood to be charmed by Portugal. 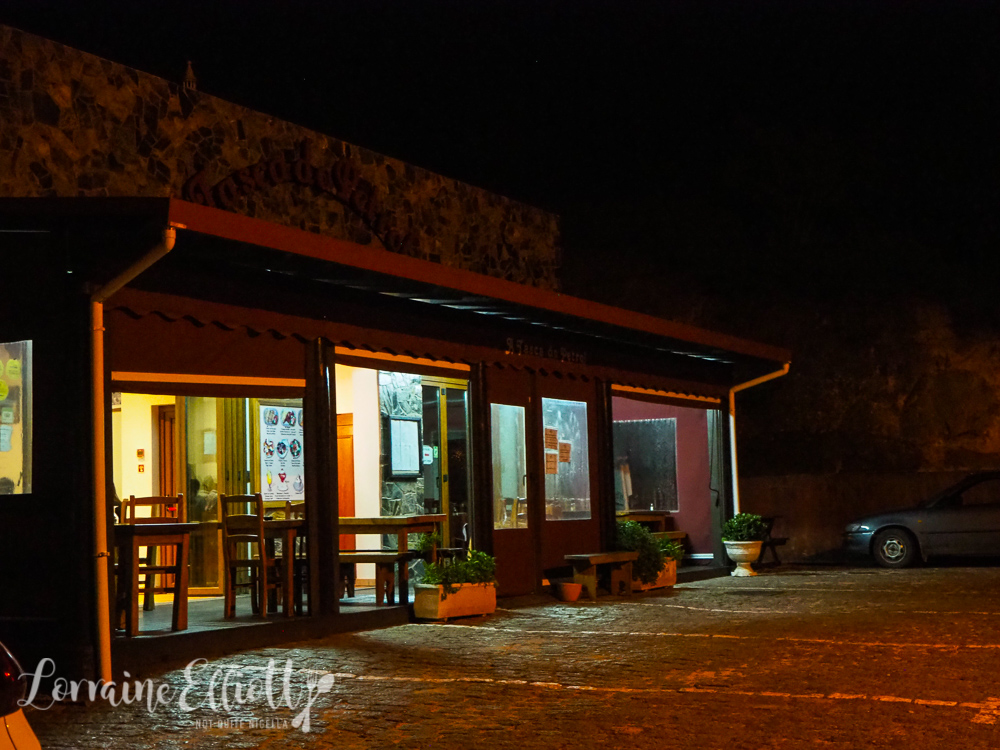 We arrive at Tasca Do Petrol in Marmalete just north of the centre of Monchique. We walk in and the man behind the counter shining glasses gives us a cursory look. I ask for a table for two and he shows us one without cracking a smile. He brings sliced bread to the table and then menus. 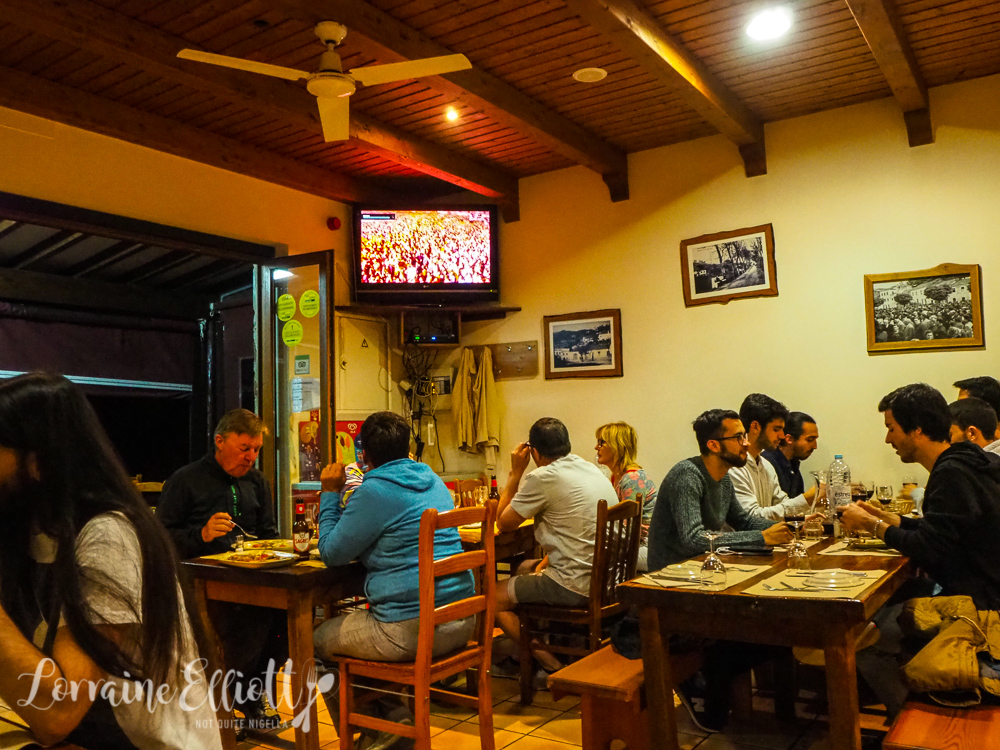 "This side of the page, ONLY," he says grimly, pointing to the left hand side. I can read enough food Portuguese to see that the more expensive, tourist friendly items are on the left which he has assigned us and the Petsicos or Portugeuse snacks are on the right. Maybe he wants to make sure that we spend more or maybe he just can't be bothered with us. 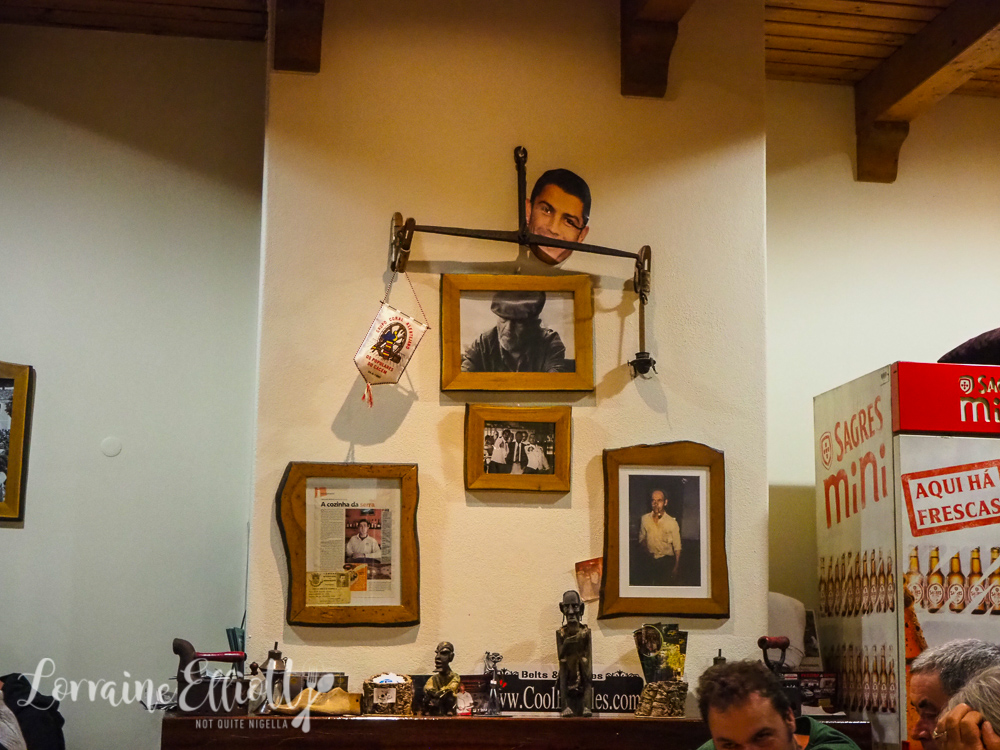 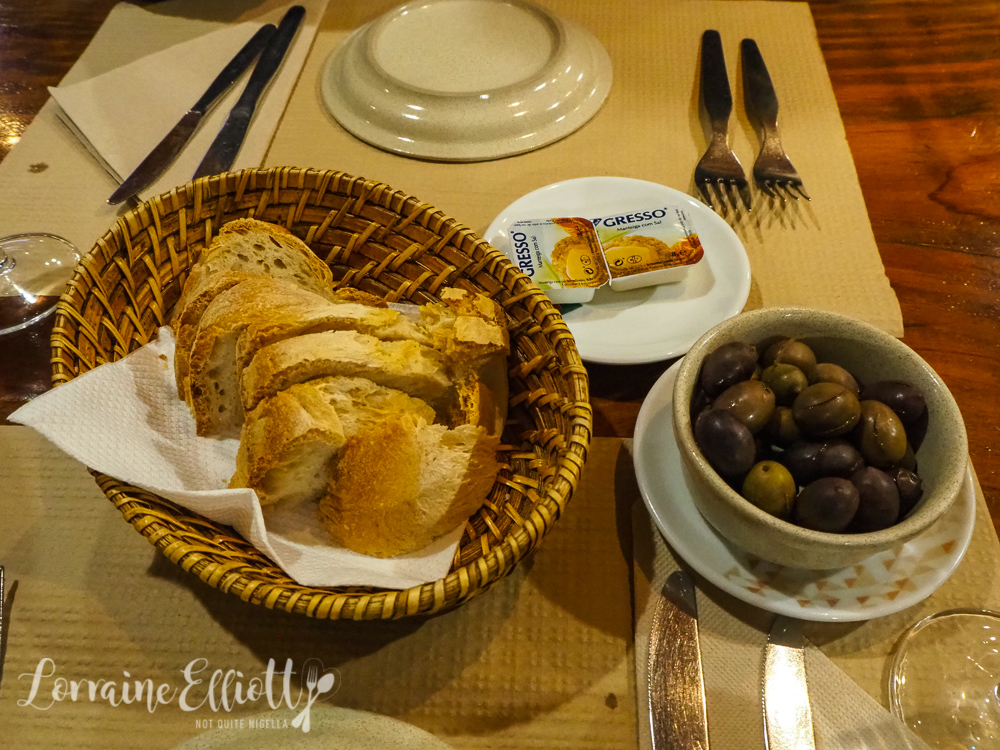 Along with the bread comes butter and olives or the couvert. The deal with couvert in Portugal is that whatever you eat you pay for. So if you don't want to pay 70C for the bread, don't eat it, likewise for the olives in brine. Oh and bring cash because this place is cash only. 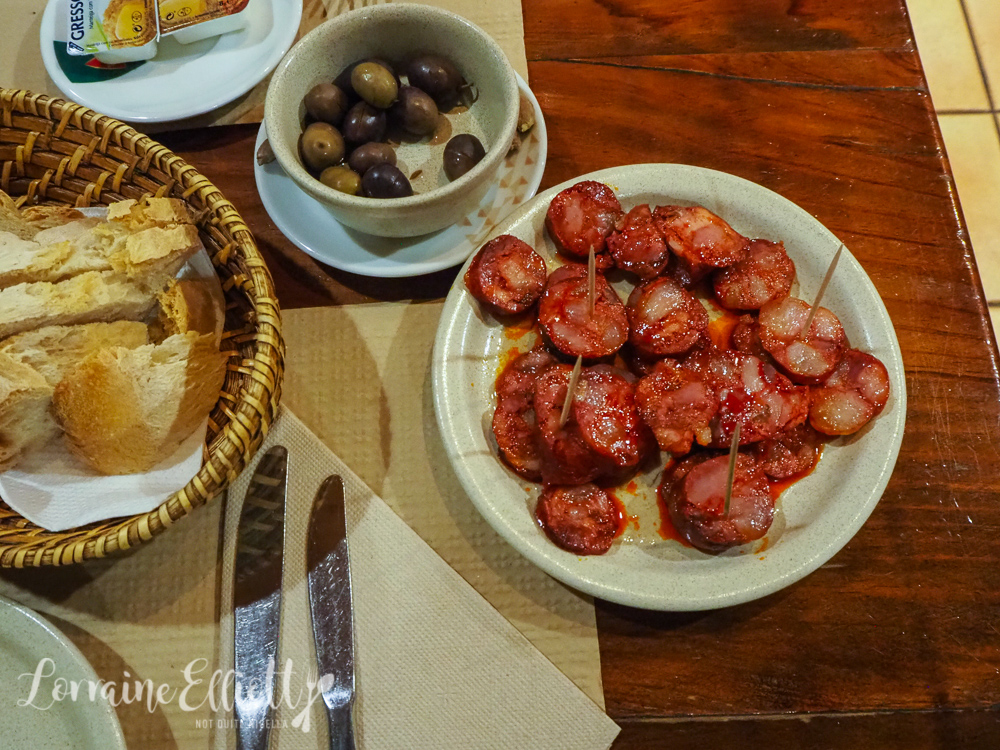 We see a plate of chourico sausage come out to another table. "I want some," I say to Mr NQN, "Can you ask him for some because I don't want to talk to him," I say to him. He orders one of the forbidden Petiscos aka beer or drink snacks, not unlike tapas and are usually served in taverns like this or tascas. "Sure," he says without a fuss or question and a few minutes later it comes out. The chorizo slices are smoky-wonderfully so, scarlet oil dripping from each intensely smoky slice and they're also salty. I pry apart a slice of bread, butter it and then wedge a slice of chorizo on it and it's fantastic. It's amazing what some chorizo and bread can do to improve one's mood. 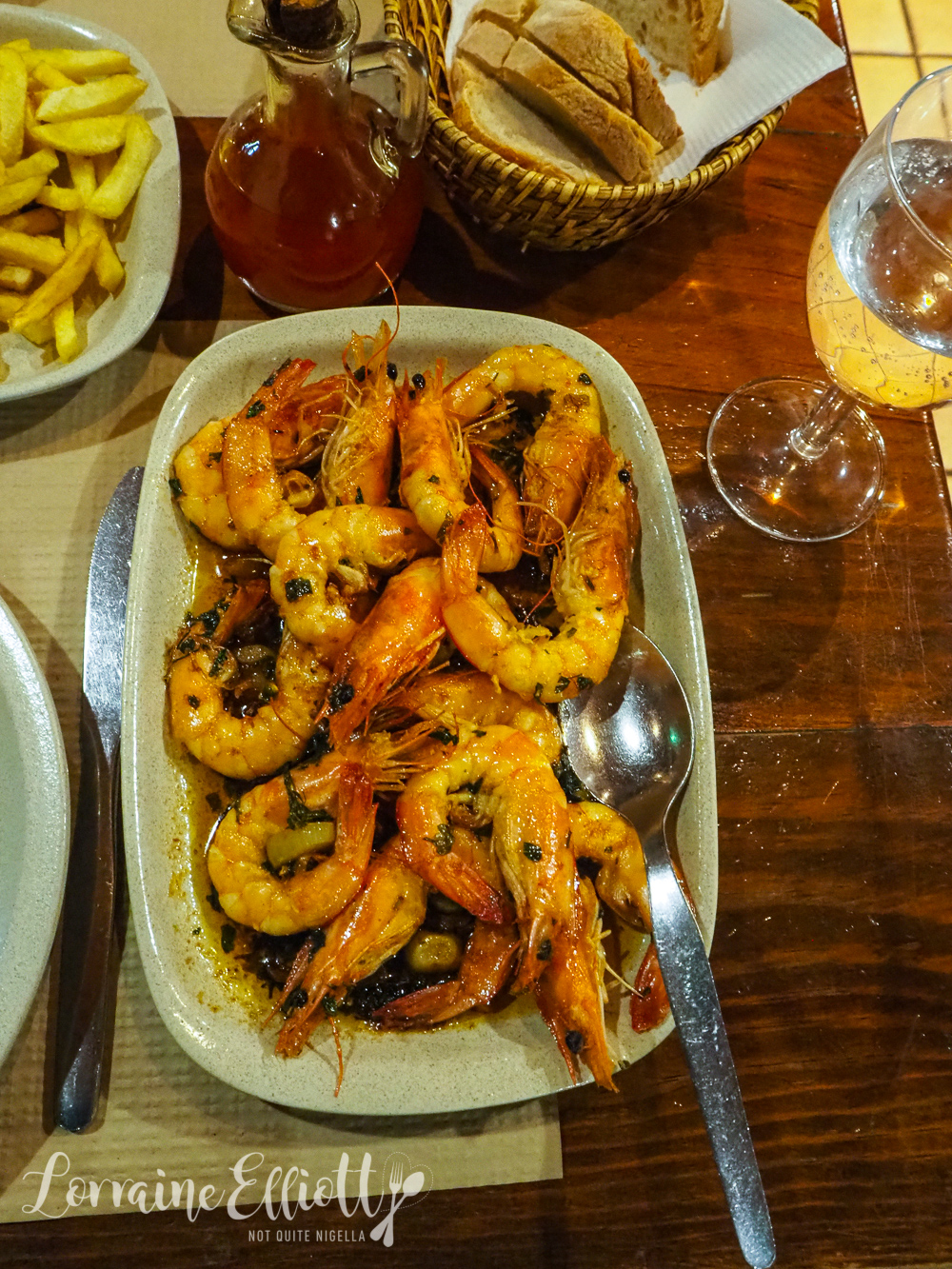 By that time the prawns arrive. While we are used to piri piri chicken, prawns here get the same treatment. Lots of garlic, parsley, coriander and a pot of fantastic and hot chilli oil to the side. I mix some of the garlic, oil and chilli oil and eat it with the prawns and it sings with flavour. It is honestly one of the tastiest shrimp or prawn dishes I've ever had. 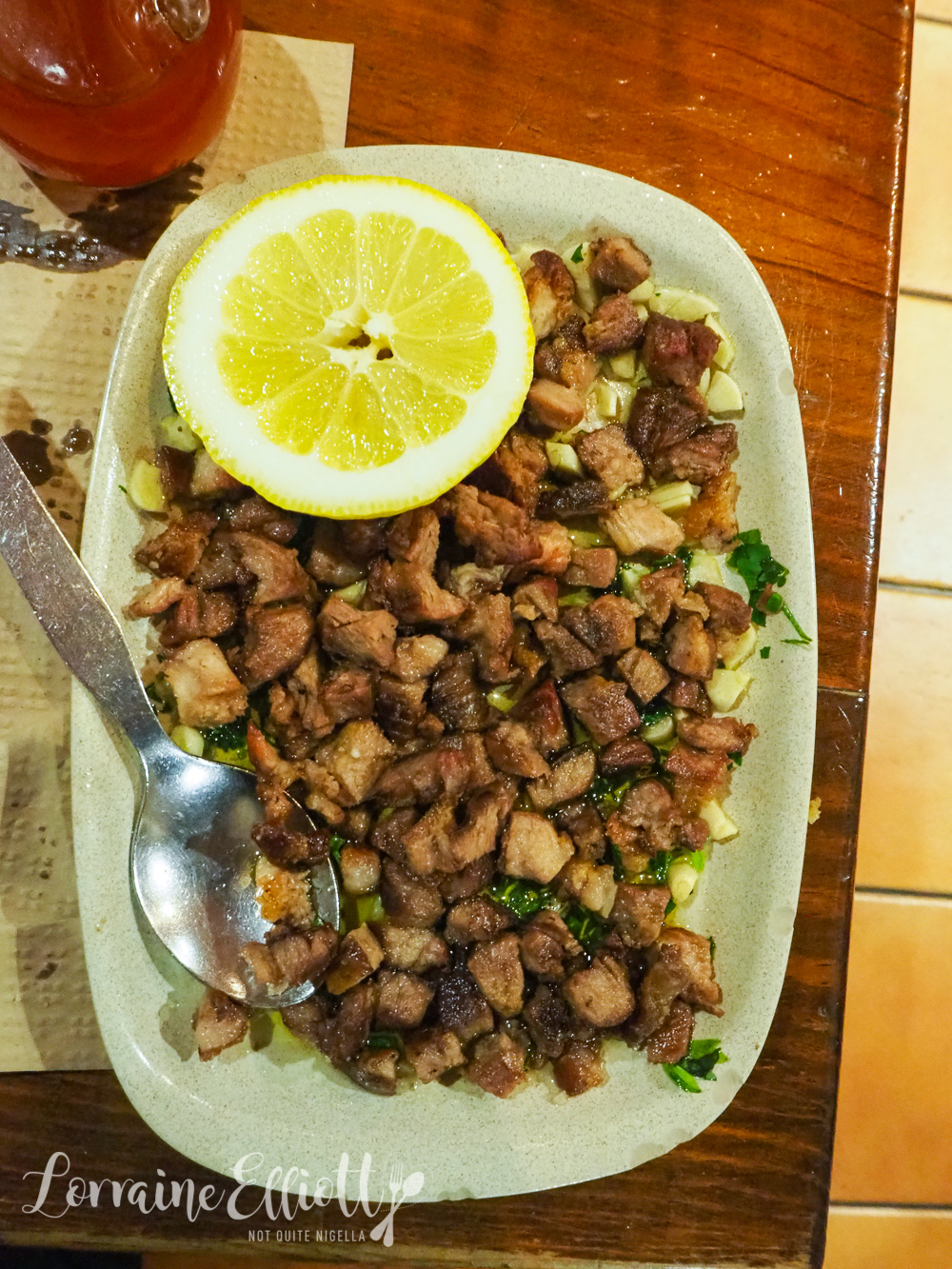 Pork, particularly black pig is king. Portugal shares the Iberian Peninsula with Spain which is where of course the famous Jamon Iberico or Iberian ham is from. The black pig is very popular here and is found in central and Southern Portugal which is where we are. The "grilled meat cooked Monchique style" is actually pork. It's diced into small pieces and fried with plenty of garlic and parsley and served with a huge half lemon that balances this perfectly. 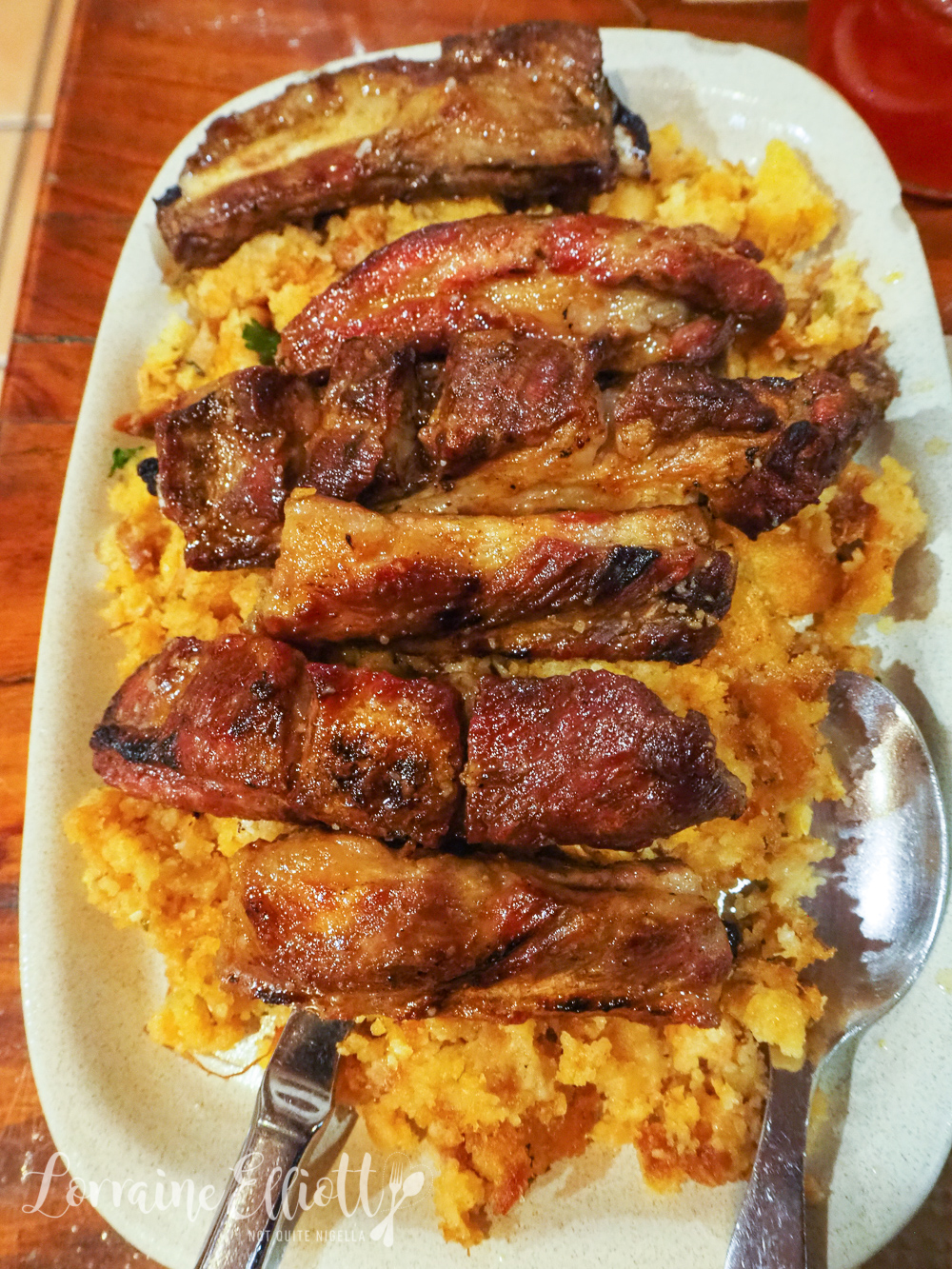 The same black pork are served as salt and pepper pork ribs with migas. Migas means "crumbs" and it is a fried mixture using day old bread as a base mixed with lard and onion and sometimes meat. It's a filling and rich dish, the pork ribs particularly lusciously fatty. 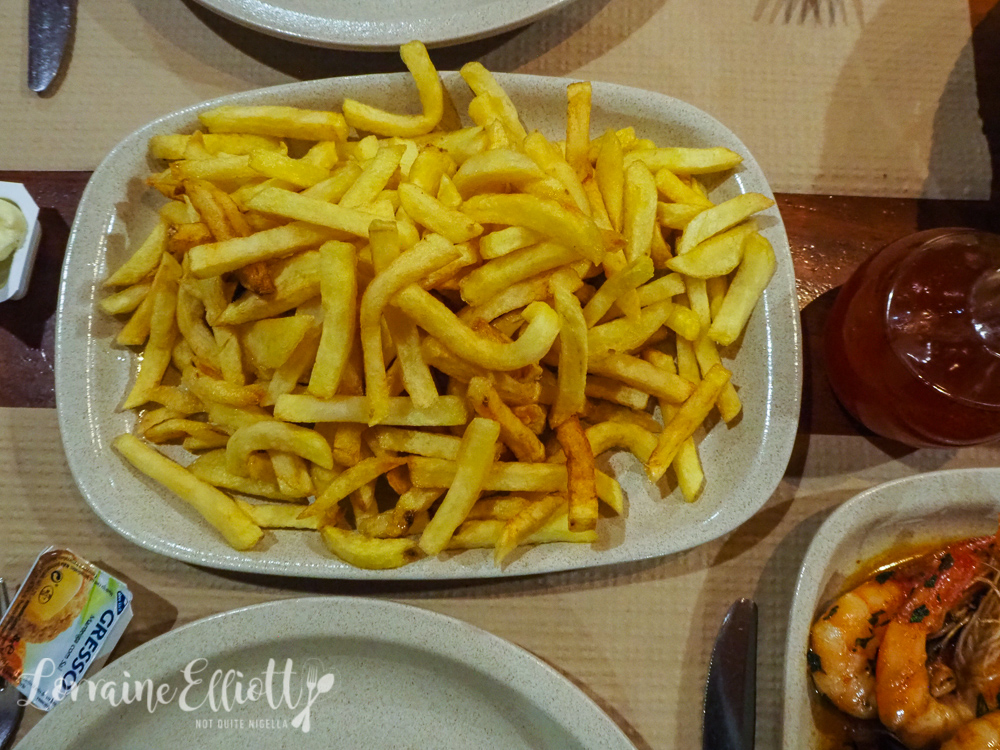 Everything as we learn comes with a huge plate of fries. I see plates of fries going past us thinking, "Does everyone order an XXXL fries with their food?" and before I know it, a plate of enormous fries lands on our table. The man chats to us about Australia, how he used to work on a cruise ship and that one day he will visit Australia. Despite its name which translates to "Petrol Station", this was more a general store that used to sell everything from food to horse feed.

There's no room for dessert and we are expected at our accommodation in Monchique. 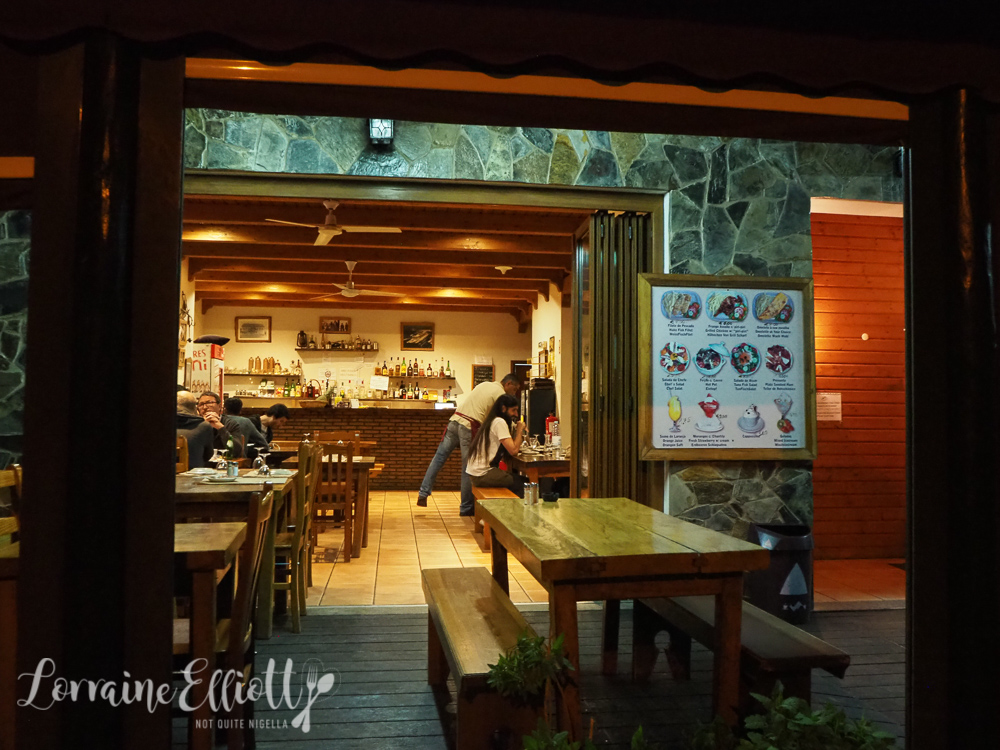 The streets of Monchique's town remind me of Cusco with its cobblestone winding paths and streets that go every which way. By now we're both so weary but I appreciate Mr NQN's cool Scandi patience while he wrenches the wheel of the rental car from side to side to try to find where we are staying (tip: don't rent a big car if you're visiting Monchique, you won't get it down some of the streets, our Volvo V40 barely made it). It's like a Dr Seuss map of a town. He's not complaining and he's also invested in making me love the house we are staying at because he chose it. 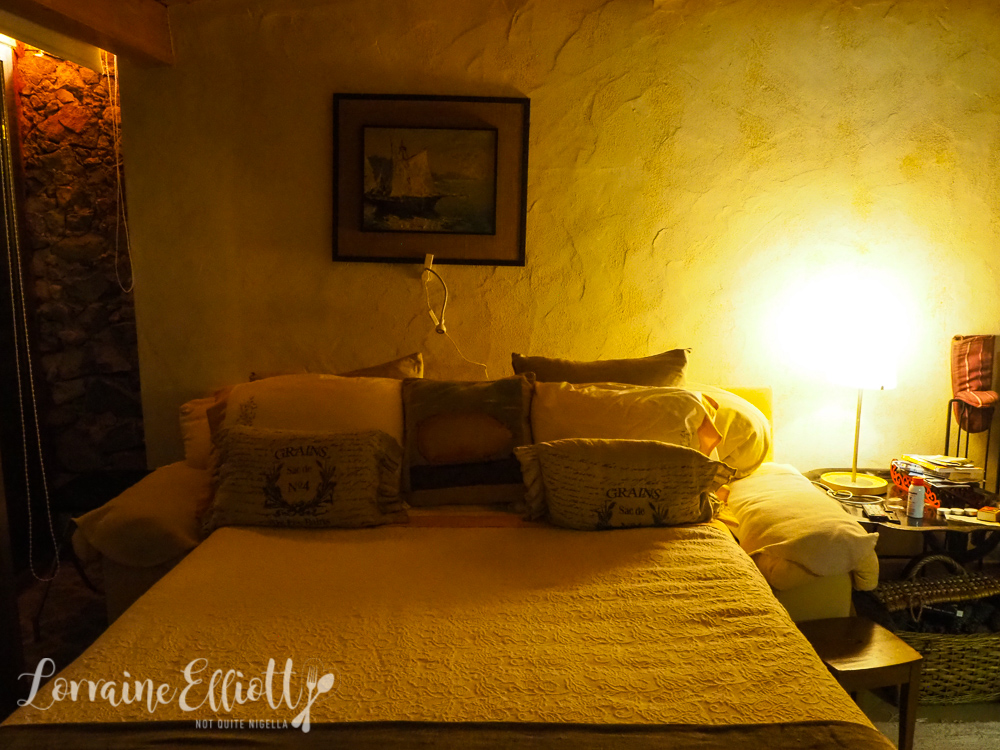 We finally find the place at around 11pm at night. There were many pigs that lived here," says the friendly and enthusiastic matriarch of the family that owns the property. These are typically Algarvian houses and they have preserved as much of the original house as possible. This house is located where pigs roamed and the large 5 bedroom house opposite is where they kept the horses. "I want to show you the rooms for the other house!" she says and beckons me and a neighbourhood cat and I follow her. I'm in a jetlagged daze as she points out incredible treasures from 17th century furniture to tiny little matchbox sized rooms. She and her husband are so friendly and lovely that I think they've mistaken us for someone famous but that's just the way they are and I'm too tired to argue. 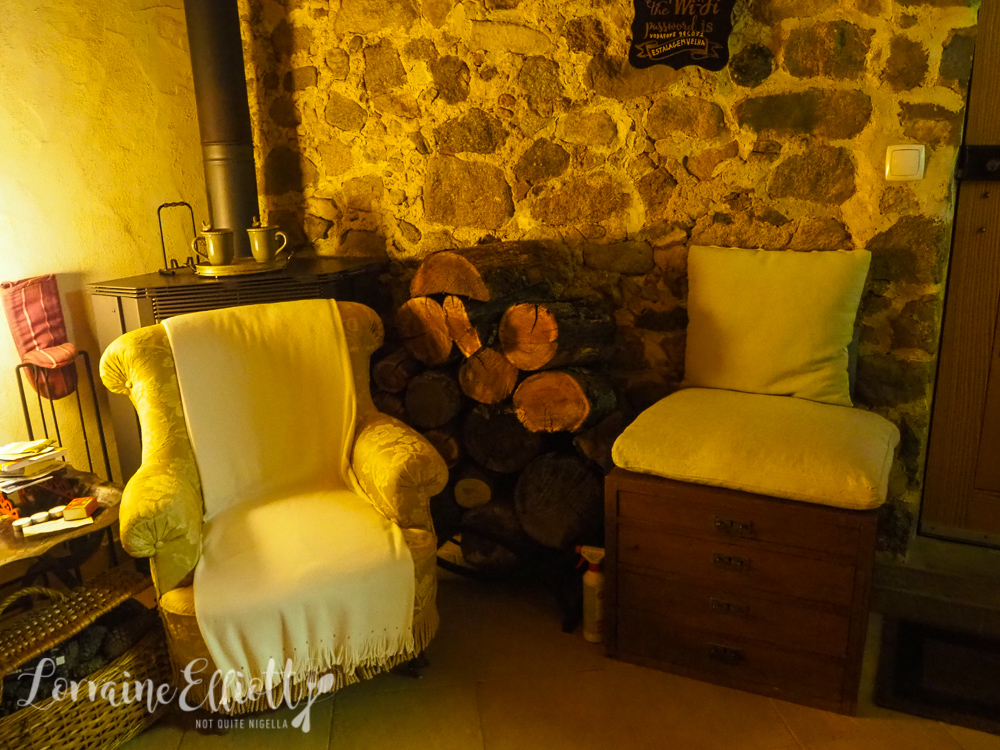 The house we are staying in is tiny and cosy (so cosy I wonder if there's enough room to put down my yoga mat the next morning). It really is as cute as a button though even down to the tiny grass lined balcony with a breakfast table and chairs. They've generously stocked the fridge for us with wine, yogurt, cheese, ham, pasteis de nata, croissants, rolls and sliced bread, juice and milk. I don't have the heart to tell them that I've got two boxes of leftover food from dinner that we'll probably eat for breakfast too. 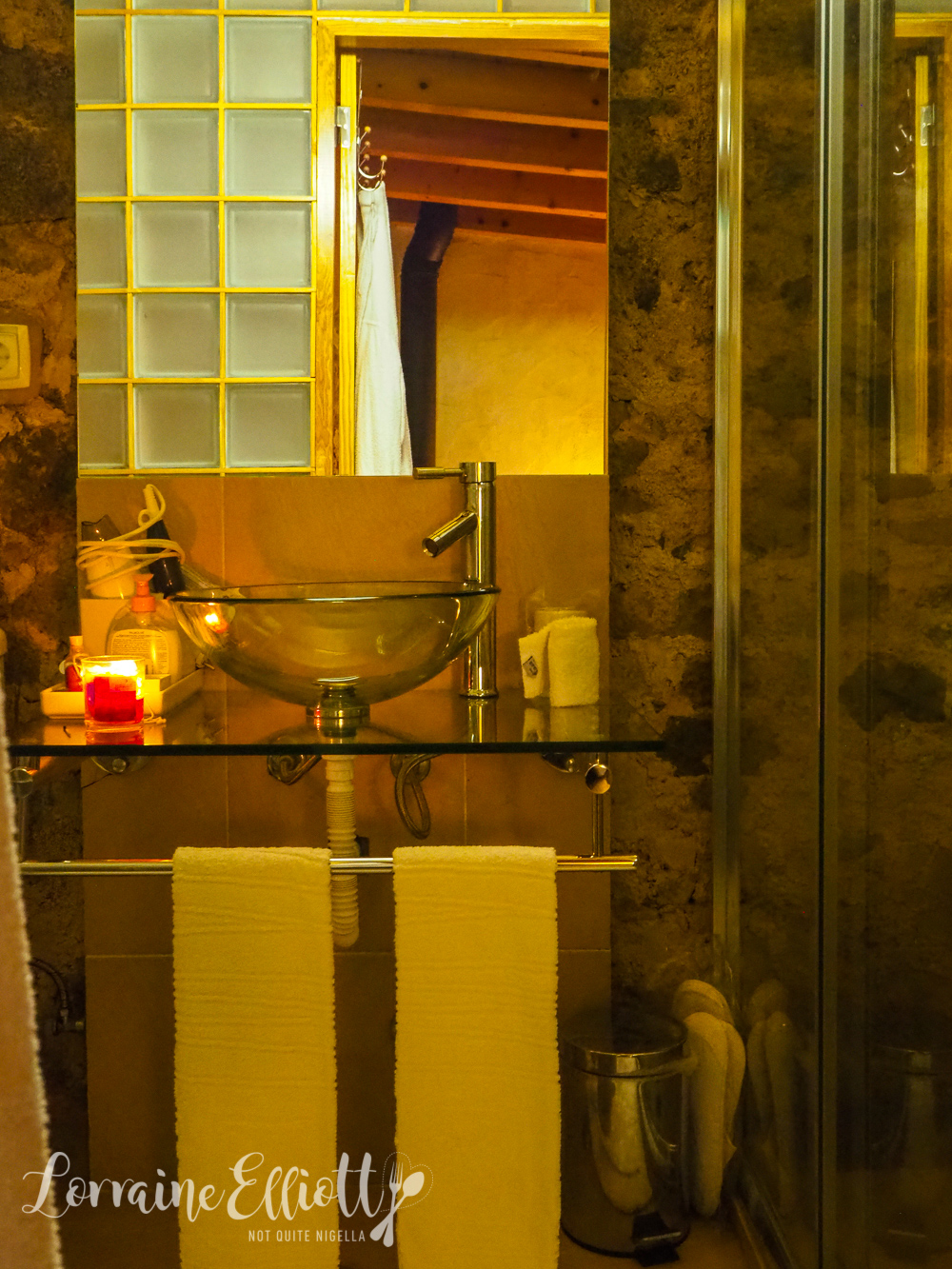 There's also wifi so I avail myself of this while Mr NQN showers and falls straight to sleep on the double bed (actually it's a sofa bed but it's a comfortable one with electric blankets). I take the world's longest shower and as I go to sleep, I hear the neighbourhood cat meowing softly outside our door asking to be let in. 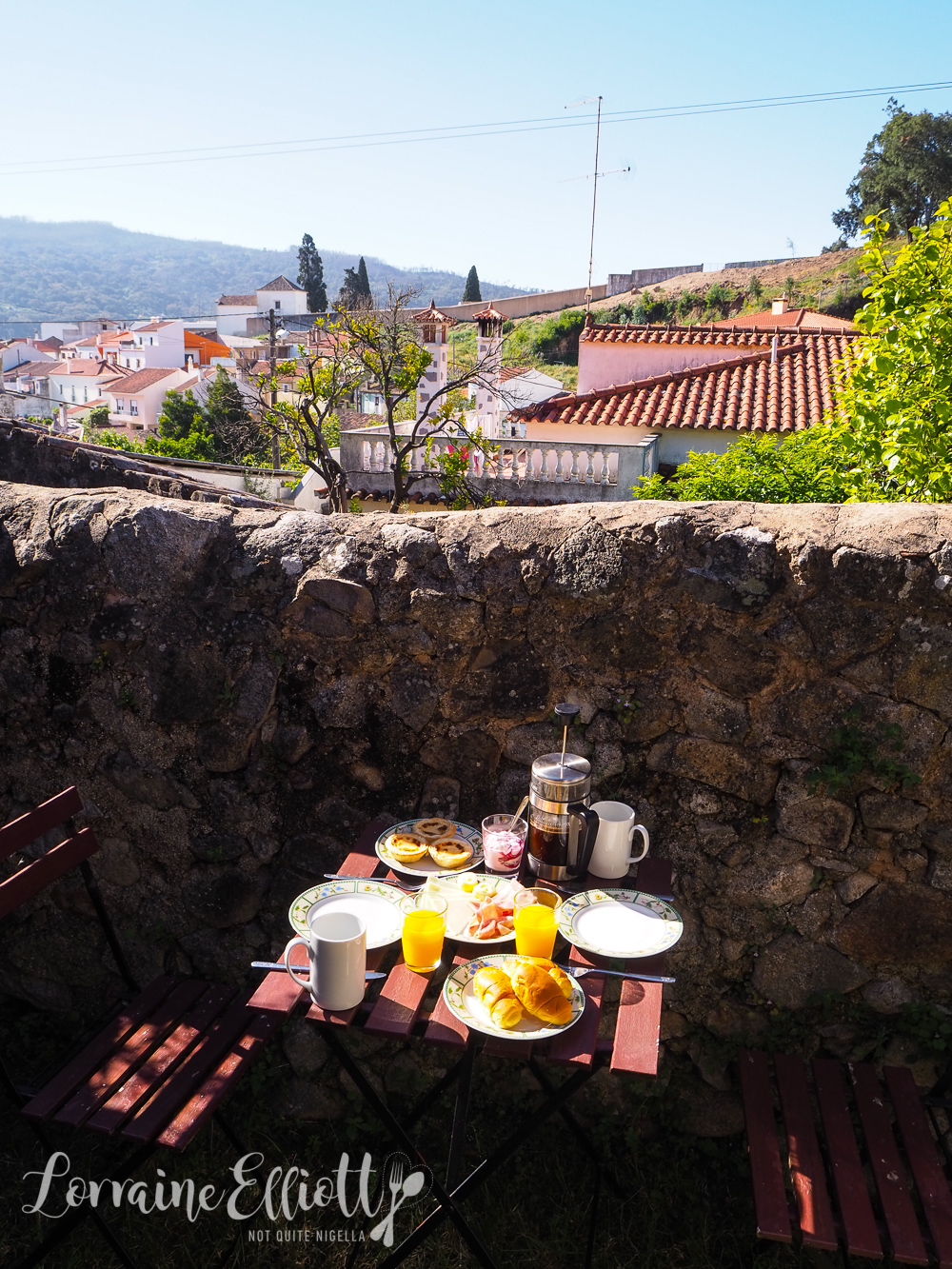 The next morning I can't wait to pull up the blinds. The view is glorious. We only got a few days of sunshine on this whole trip and this was one of them. We eat breakfast on the tiny balcony with the spectacular view below before leaving to explore the Algarve region (more on an upcoming post). 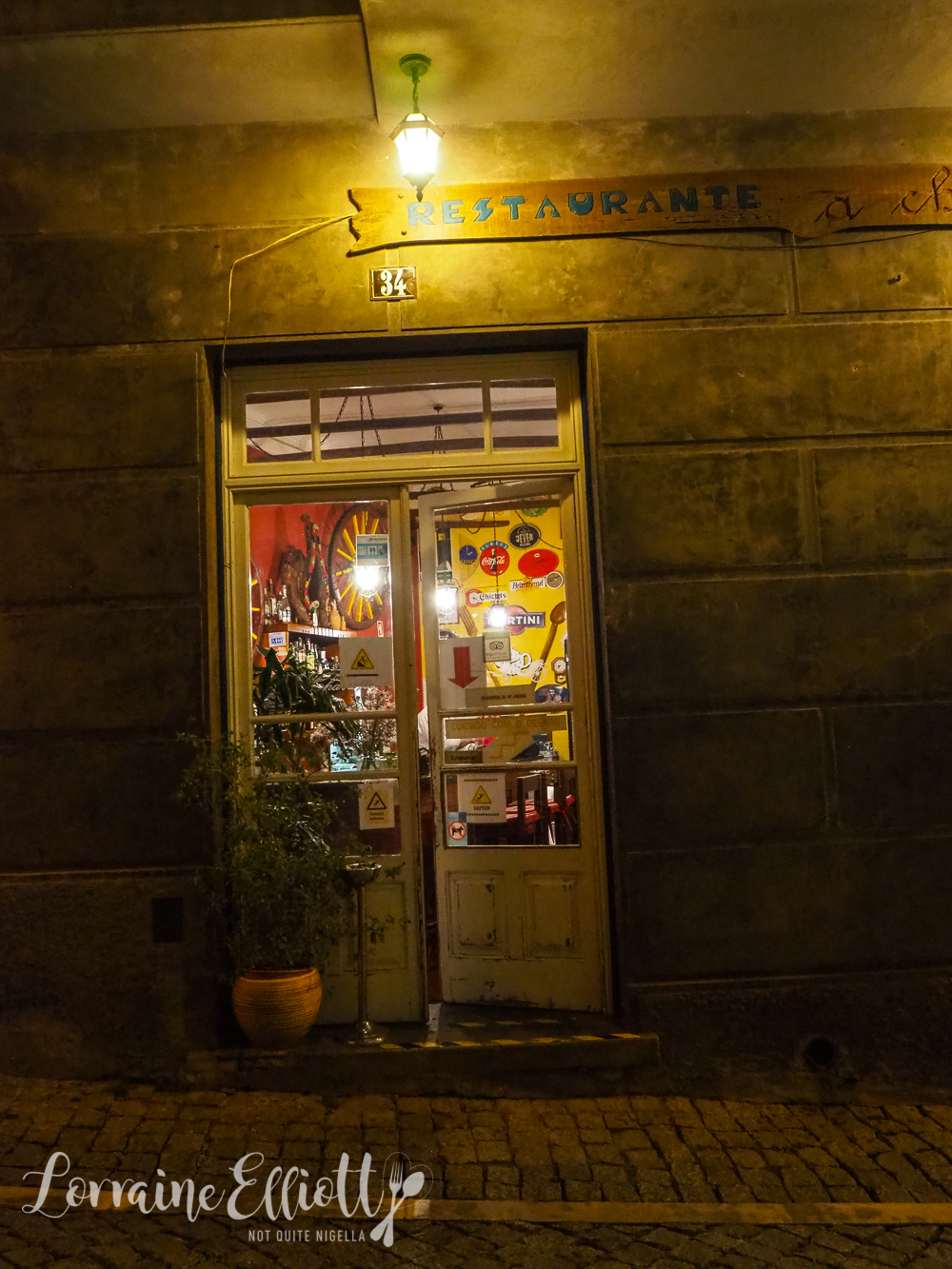 But Monchique town itself has a host of other eateries to choose from and one favourite is A Charrete, on Rua do Dr. Samora Gil. The restaurant has been open for around 30 years and the menu features many of Monchique's classic dishes. 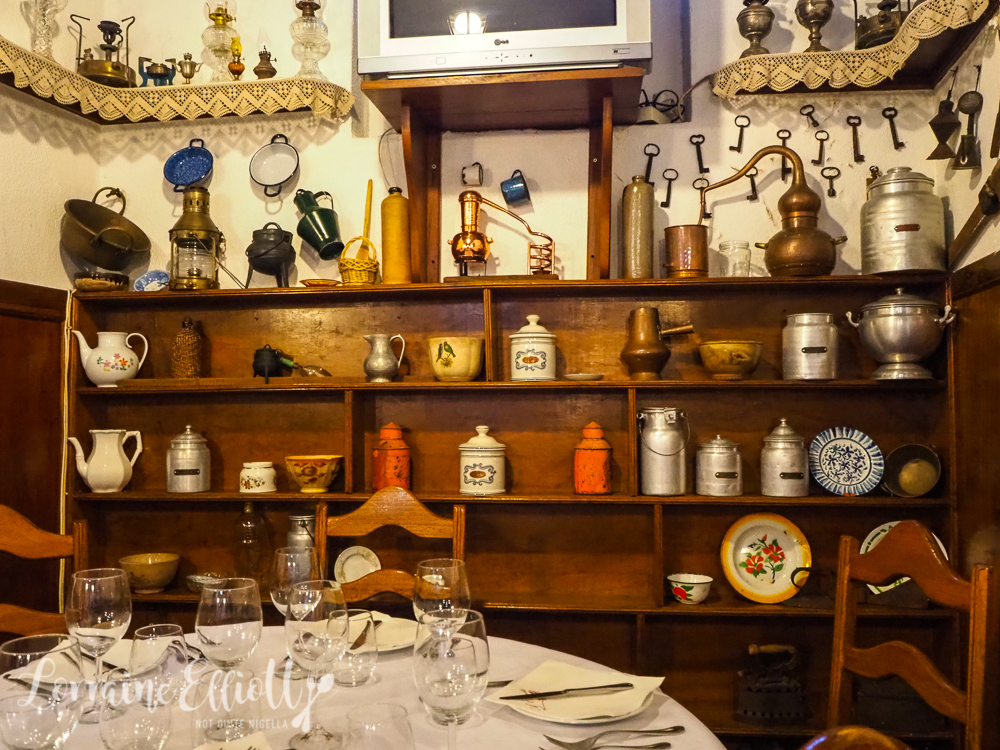 It's a large restaurant and the menu is translated into several languages and although it is popular with tourists, the food is traditionally Portuguese and specifically focuses on food from Monchique. 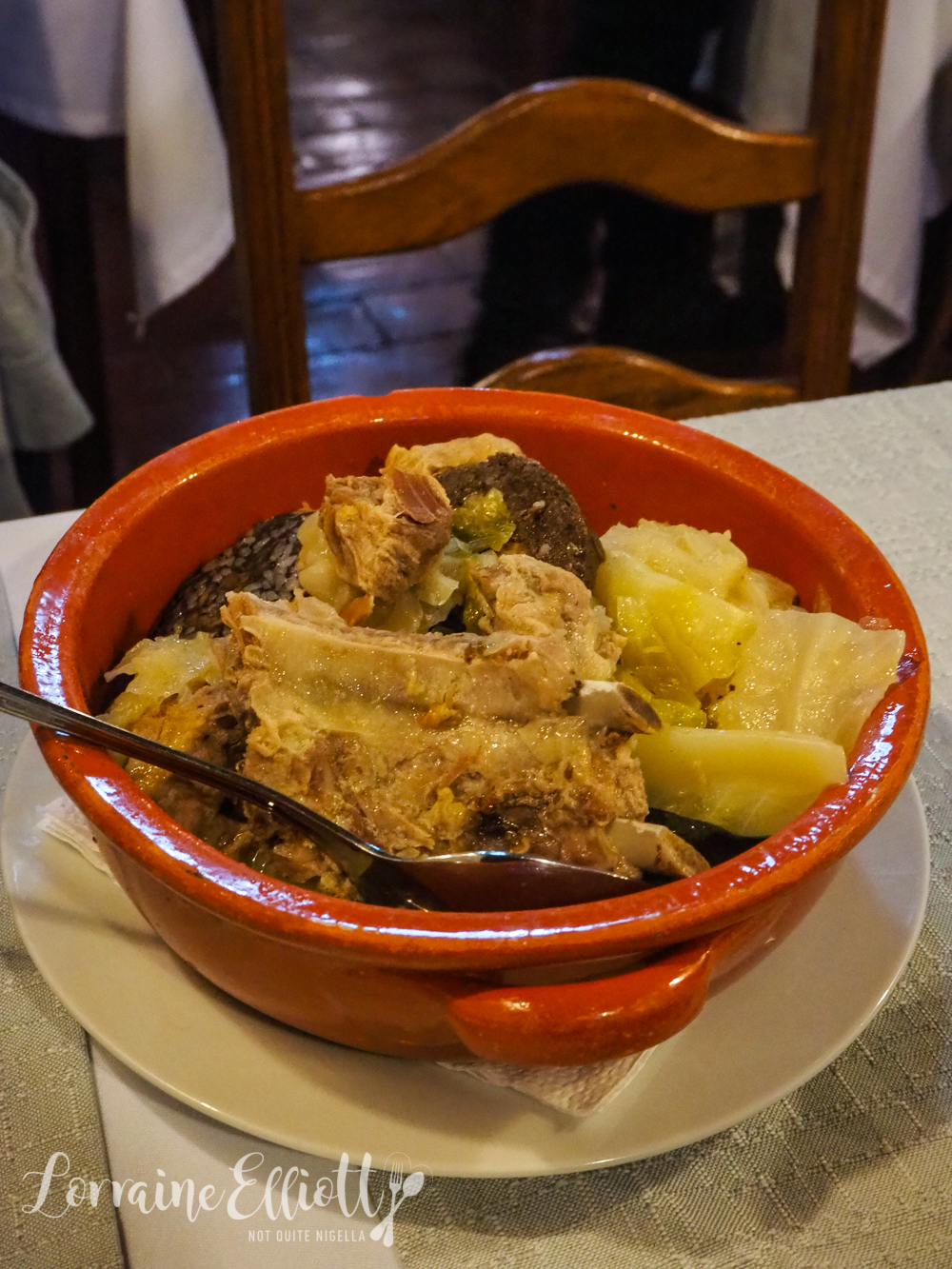 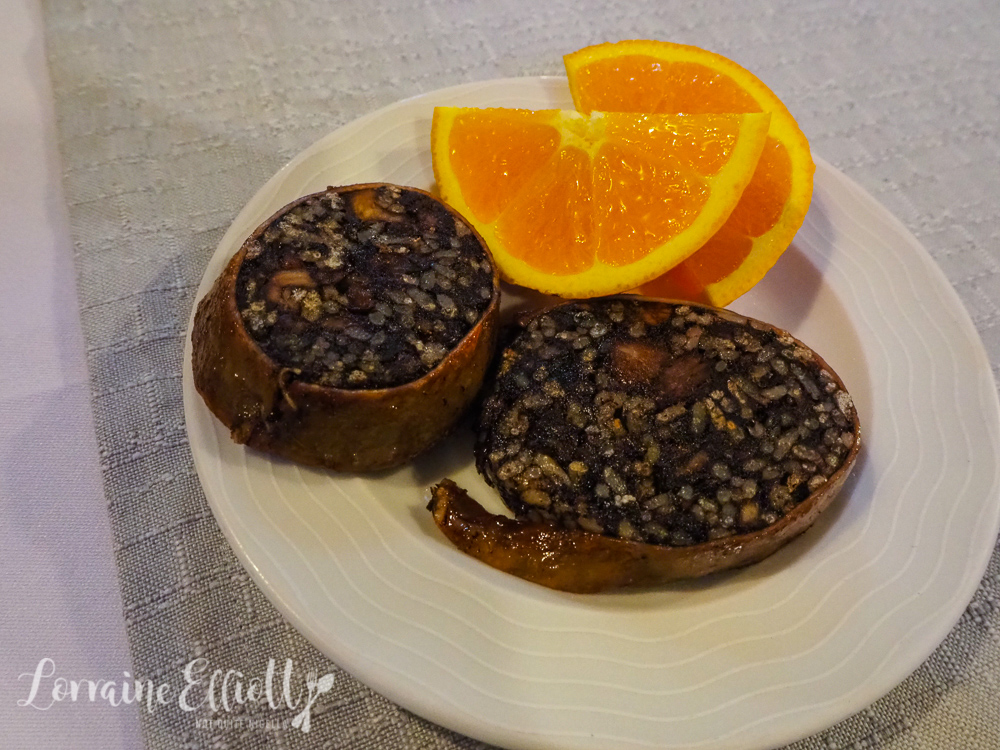 Take the cabbage Monchique style. It's an earthenware pot that could easily feed 2 or 3 people. It's soft cabbage with several cuts of pork from pork loin, pork ribs, sausages and mohlo a dark sausage similar to a black pudding but stuffed with rice. It's pure winter comfort food and the sort of dish you'd crave when it is cold outside which it is in Monchique. In fact I am craving this dish now as I write about it it's that good. 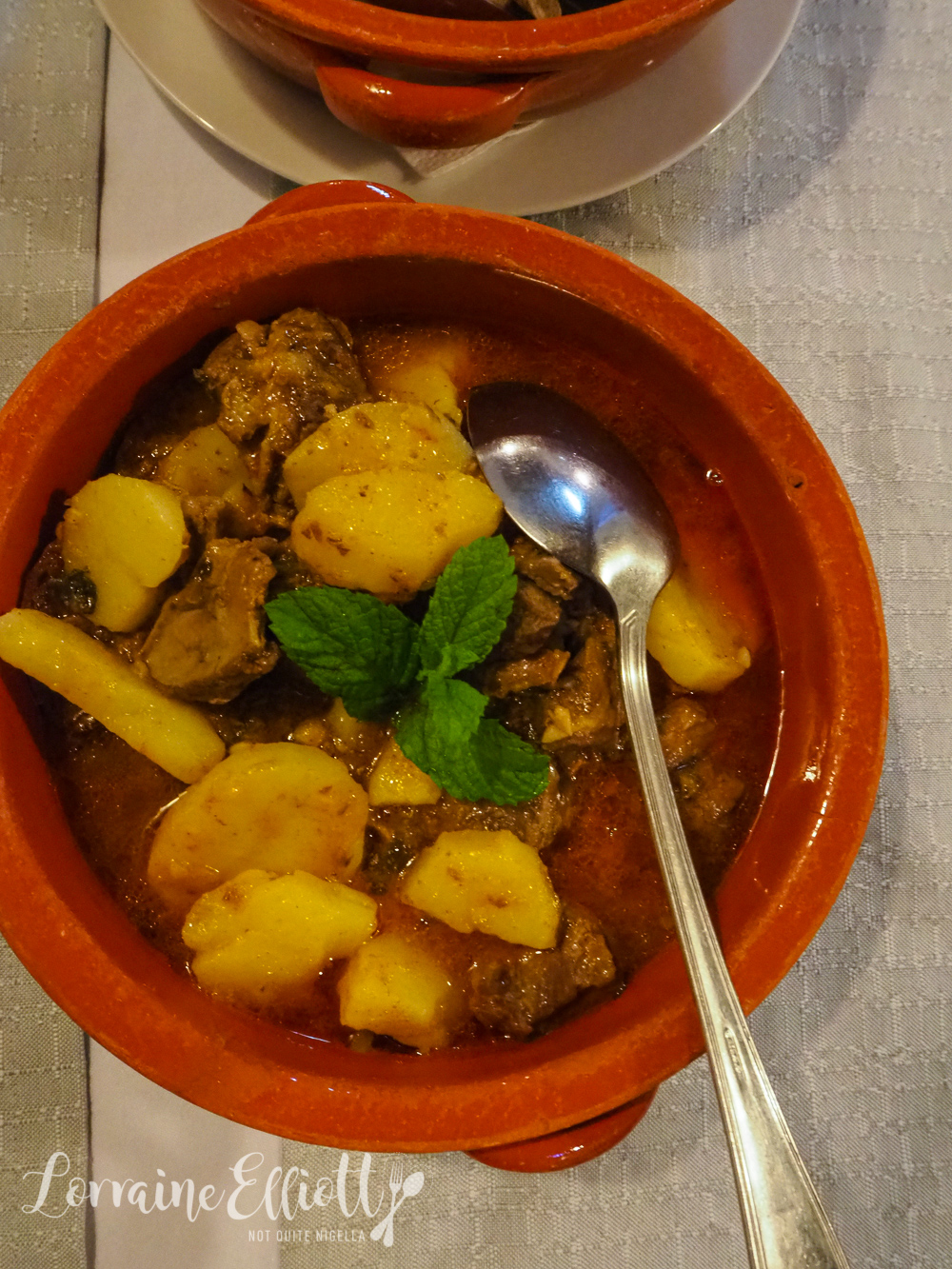 And then there is the Ensopada de Borrego starts with thin slices of dense bread topped with potatoes, slow cooked lamb, garlic, white wine and herbs. All the flavours meld together to produce a dish that is full of flavour and high on comfort. This is mountain food, designed to sustain and give your palate a hug. 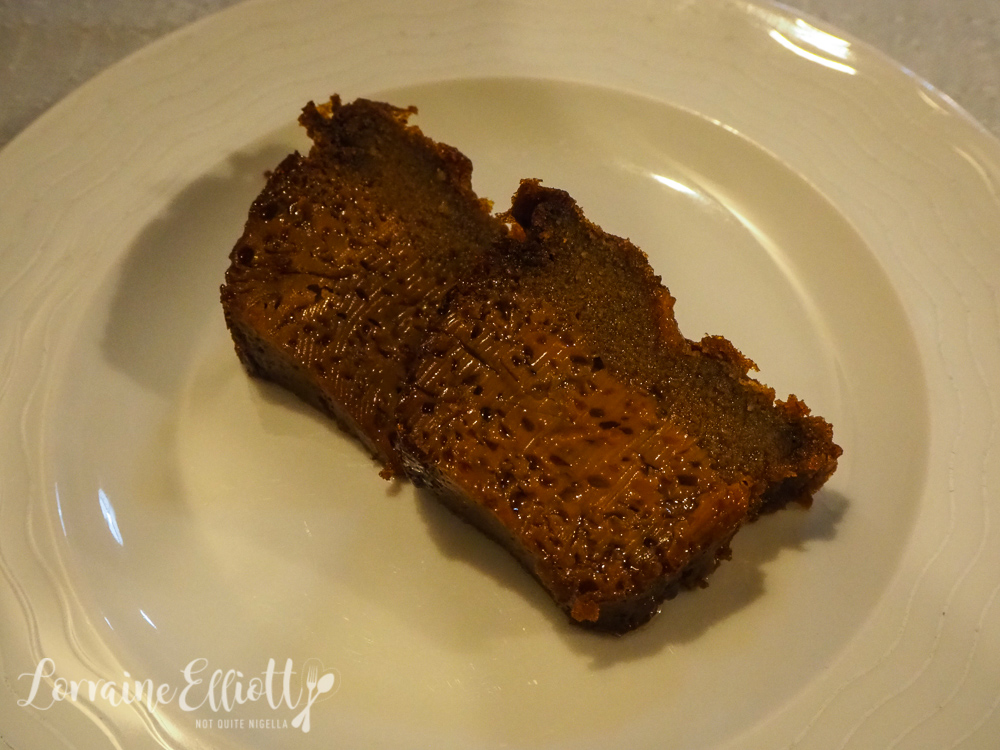 There's not a lot of room for dessert but we have to give one local cake a try. The Pudim de Mel is a honey flavoured "magic cake" where the cake separates into two layers-a flan and a more regular cake. It's sweet and very moist and when I can't finish my slice Mr NQN swoops in to finish it. 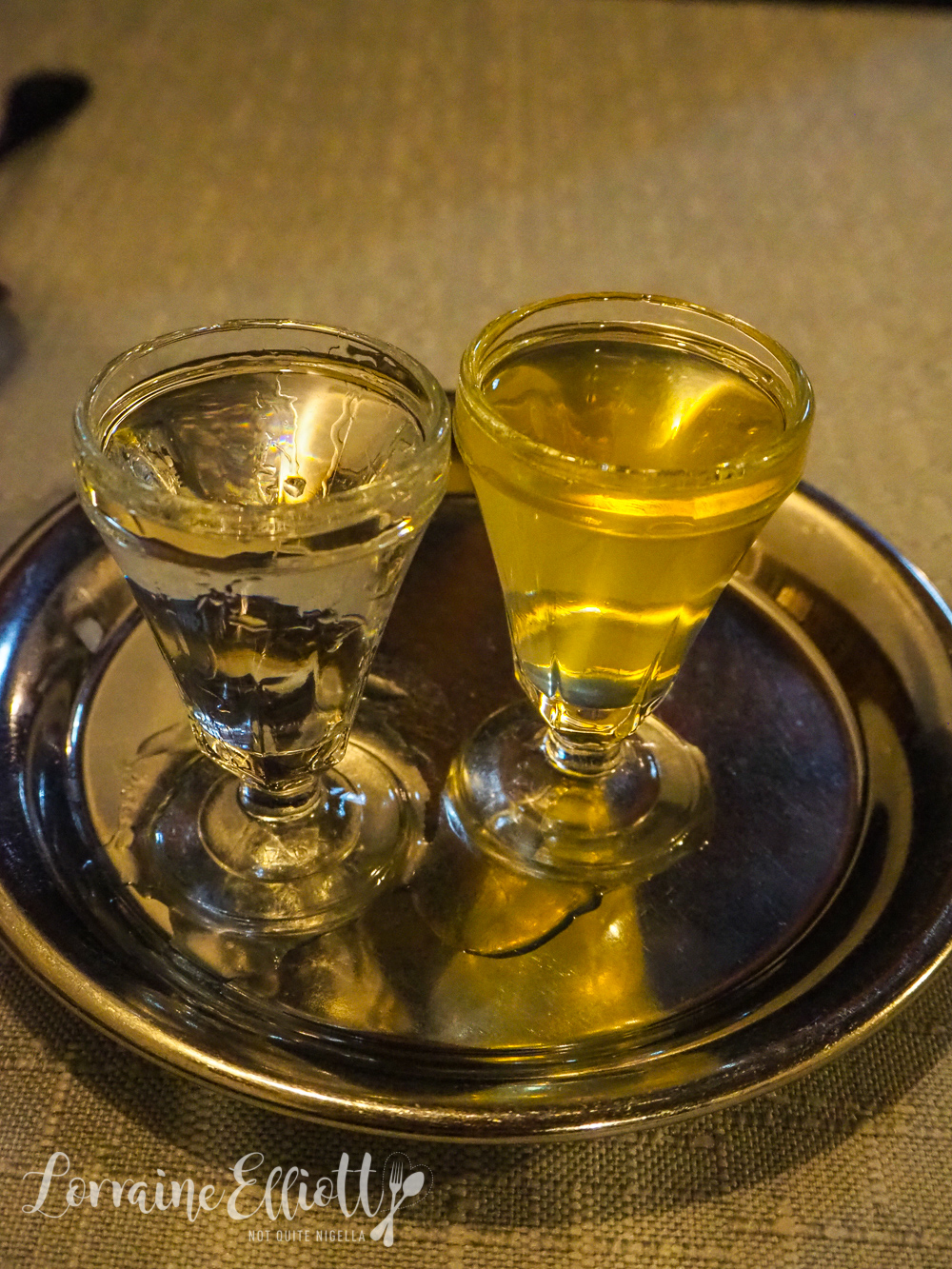 And to finish? Small glasses of Medronho, in the original version as well as the much more palatable honey version.

All meals and travel were independently paid for. 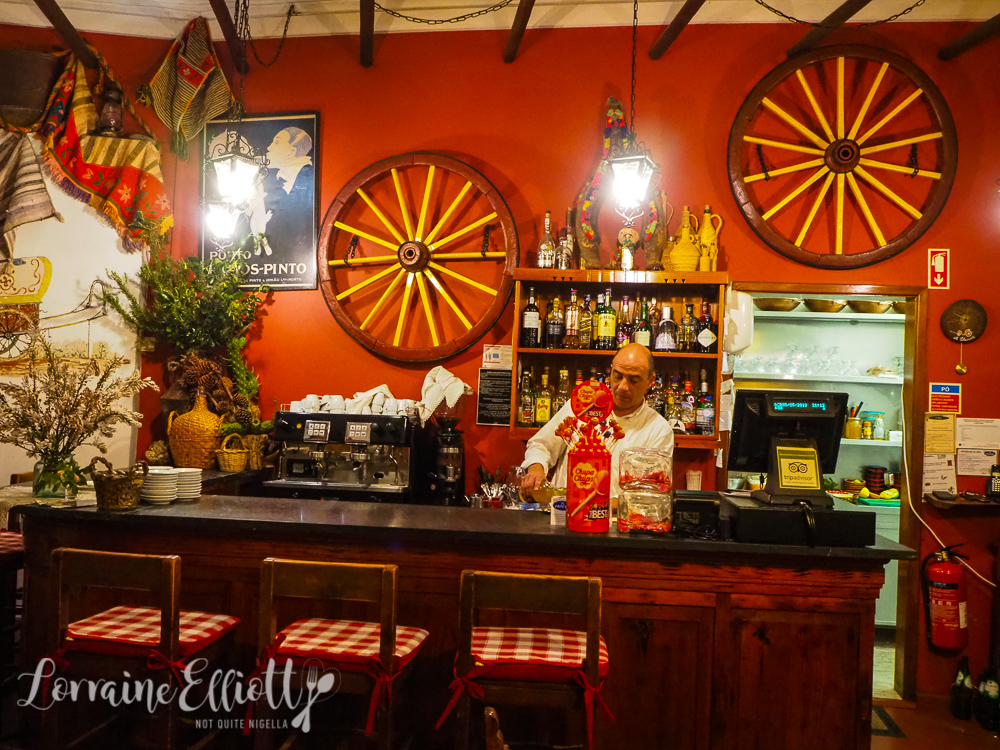