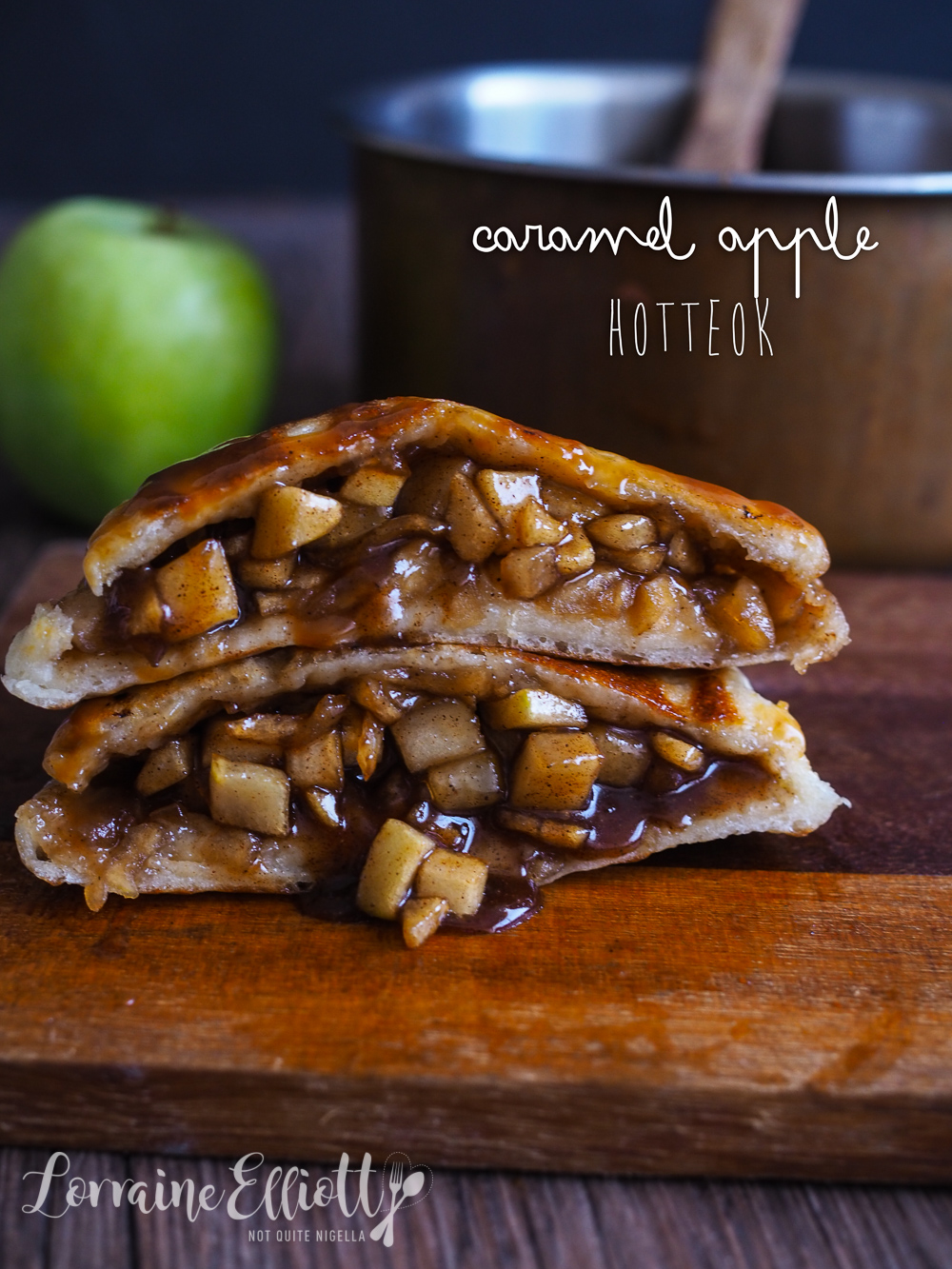 Hotteok is a Korean street food that transcends any language. It is a puffy yeasted pancake donut stuffed with sweet nuts or fruit. In this version I fill hotteok with cinnamon scented apples and a drizzle of salted caramel sauce. And Dear Reader, this is definitely a pushy recipe it's THAT good! I ate two hotteok hot off the pan!

Traditionally hotteok is filled with a sweet mixture of nuts, cinnamon and brown sugar but I wanted to make a version that tasted like apple pie, hence this caramel apple version. Hotteok are usually eaten during winter and they are said to be based on a Chinese savoury pocket. Apparently its history goes back to 1882 when Chinese merchants emigrated to Korea. Nowadays in Korea you can find packets of hotteok premix at the supermarket. And I will be making a savoury version too because I just want to eat hotteok all through winter! 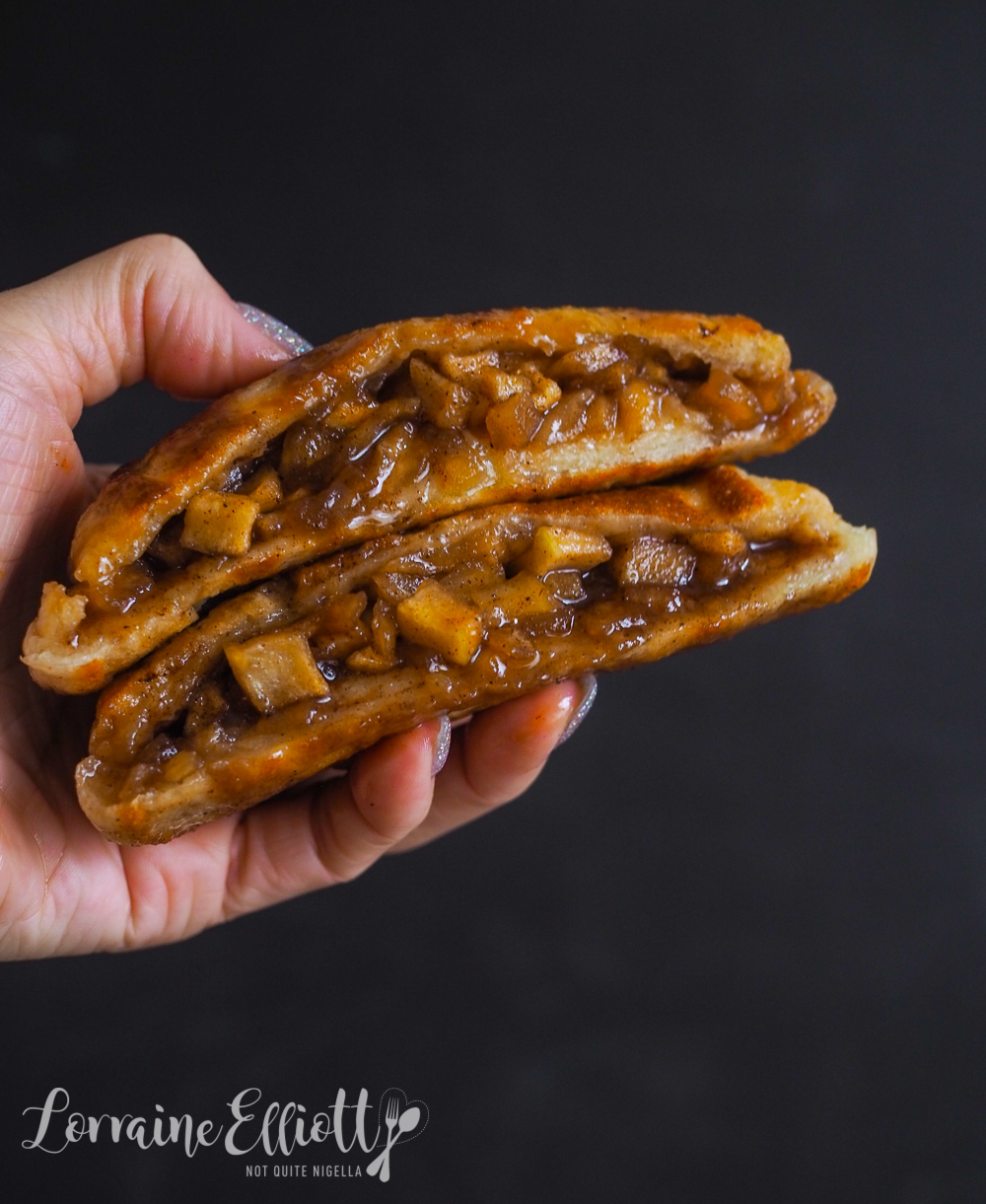 I tried my first hotteok at a restaurant in Surry Hills called Soul Dining. While hotteok usually uses plain flour, their version used sweet glutinous flour and that added so much fantastic, stretchy texture that I made my version using the glutinous flour. 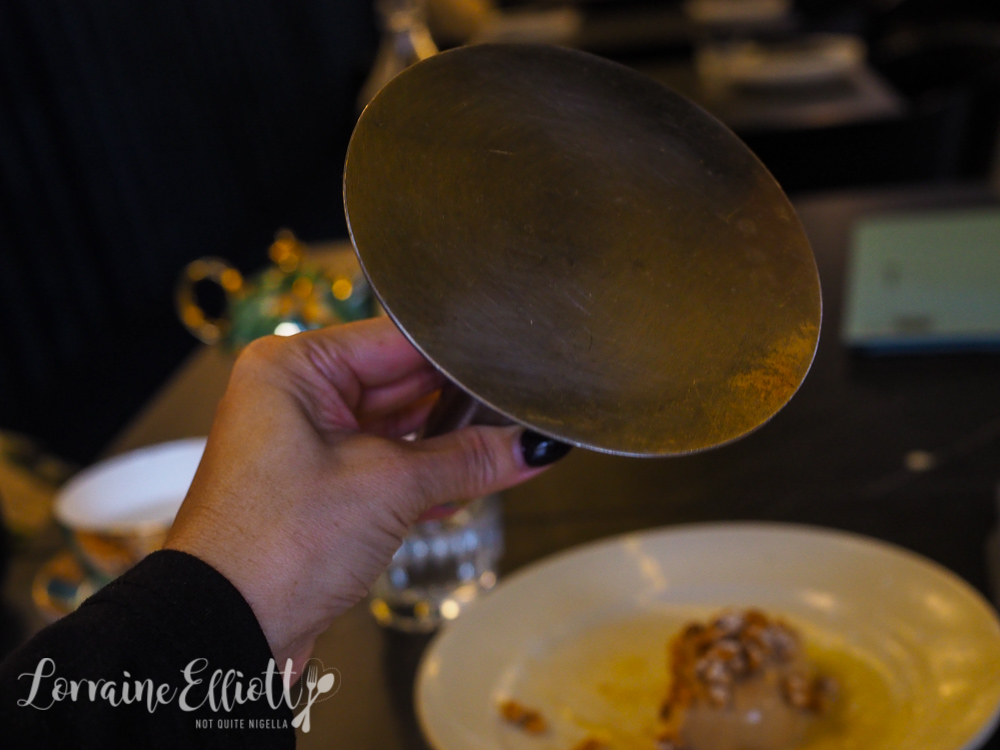 Street vendors press it down using a circular metal hotteok press with a handle. The owners of Soul Dining even showed me the one they use that they had brought over from Korea. A hotteok is best eaten hot which is why it's popular in winter. I had to stop myself at two they were that good (that's a warning, make these with people around)! 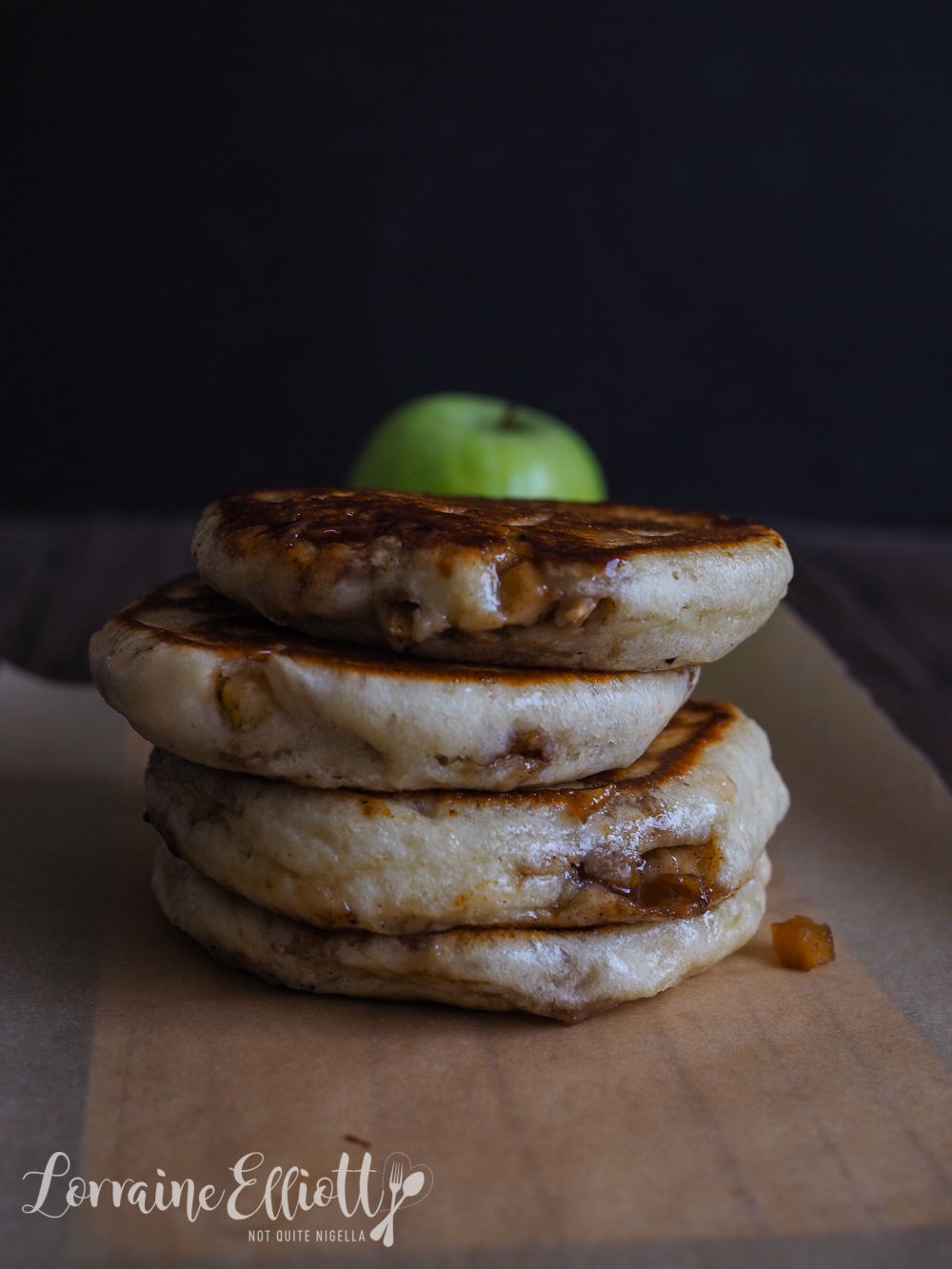 Someone asked a question on twitter the other day that went a bit viral. It was "What would your cookbook be called?" I thought about it for a moment and I thought mine would be called "Totally random eater". Because one night I will be eating Korean food, the next night I'll be eating Lebanese and then the night after I will be eating Pakistani food and then the day after I'll spend the whole day eating fried chicken. I think Totally Random Eater sums it up and I'll raise a third hotteok to that! ;)

So tell me Dear Reader, what would your cookbook be called? Have you ever tried hotteok? What sort of savoury filling would you suggest for my savoury recipe? 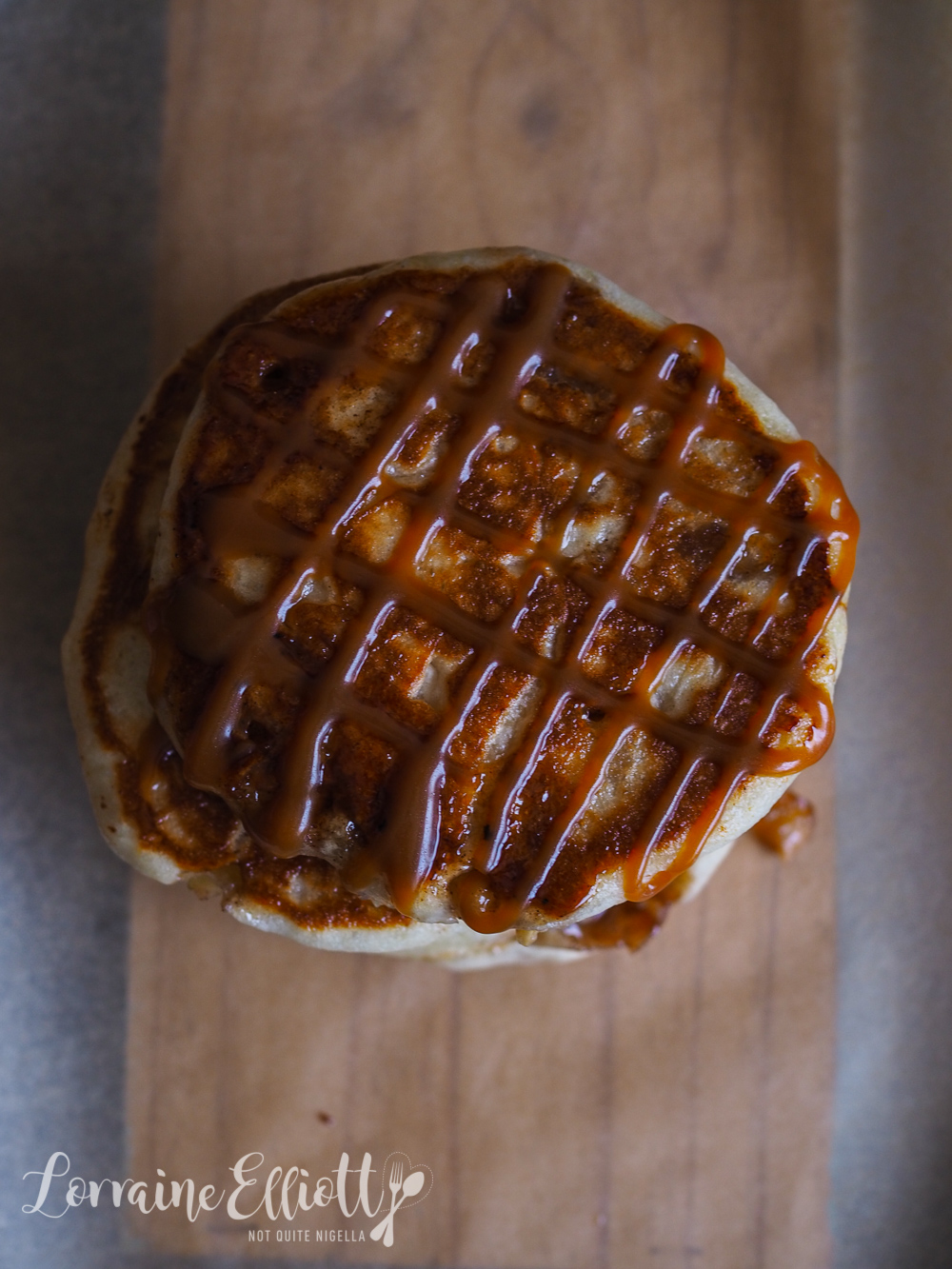 Sweet glutinous flour can be found at Asian grocery stores. If you can't find it, you can replace it with all plain flour but it will have a slightly different texture. 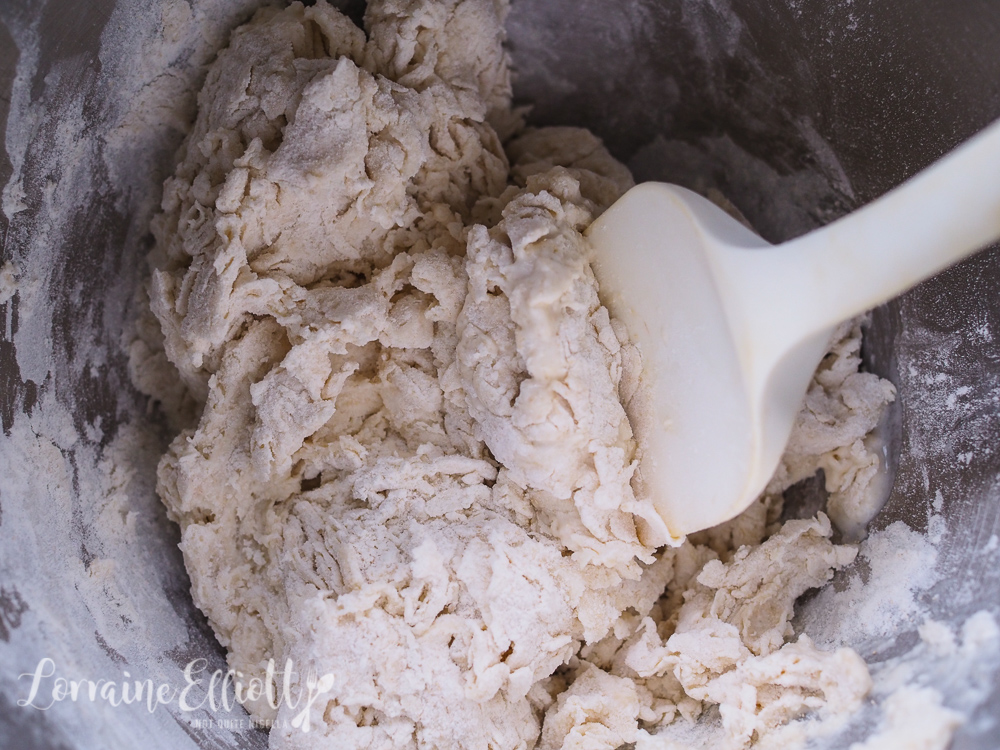 Step 1 - Mix the two flours with the sugar, oil, yeast and salt together. Add in the water and mix until it becomes a shaggy dough. Then knead for 8 minutes or until elastic. Shape the dough into a ball and roll in a light coating of oil and allow to rise for 1 - 1.5 hours in a warm place (I put it in a bowl of hot water) until double in size. 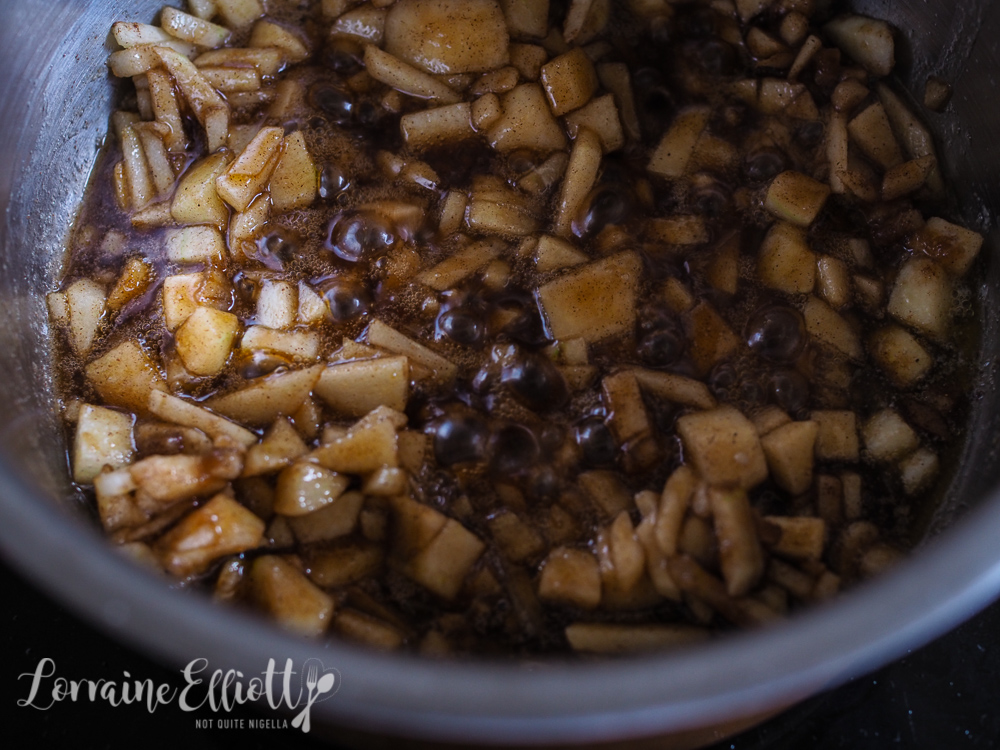 Step 2 - While the dough is rising, cook the apples so they have time to cool. Place the diced apples, sugar, cinnamon and butter in a small saucepan and simmer until apples are soft and you get a lovely syrup. Allow to cool completely.

Step 3 - Punch dough down and knead in salt. Grease a clean surface and divide dough into six rounds. Put a frying pan onto the heat - low to medium is best (eg. 4 out of 10 where 10 is the hottest). 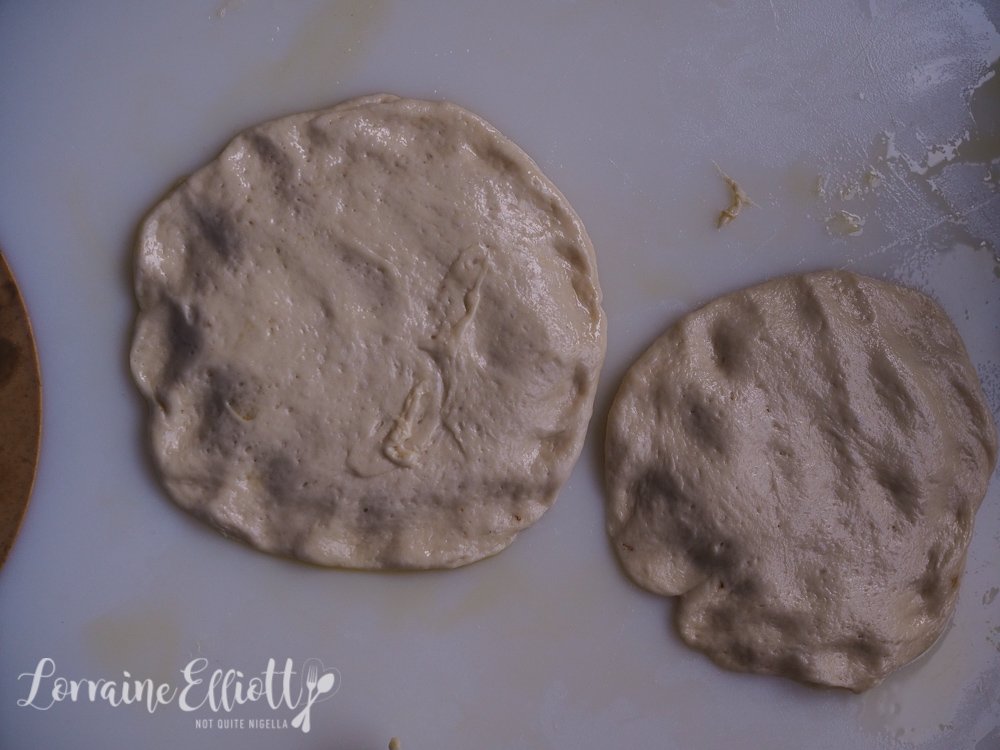 Making the rounds of dough thinner around the edges 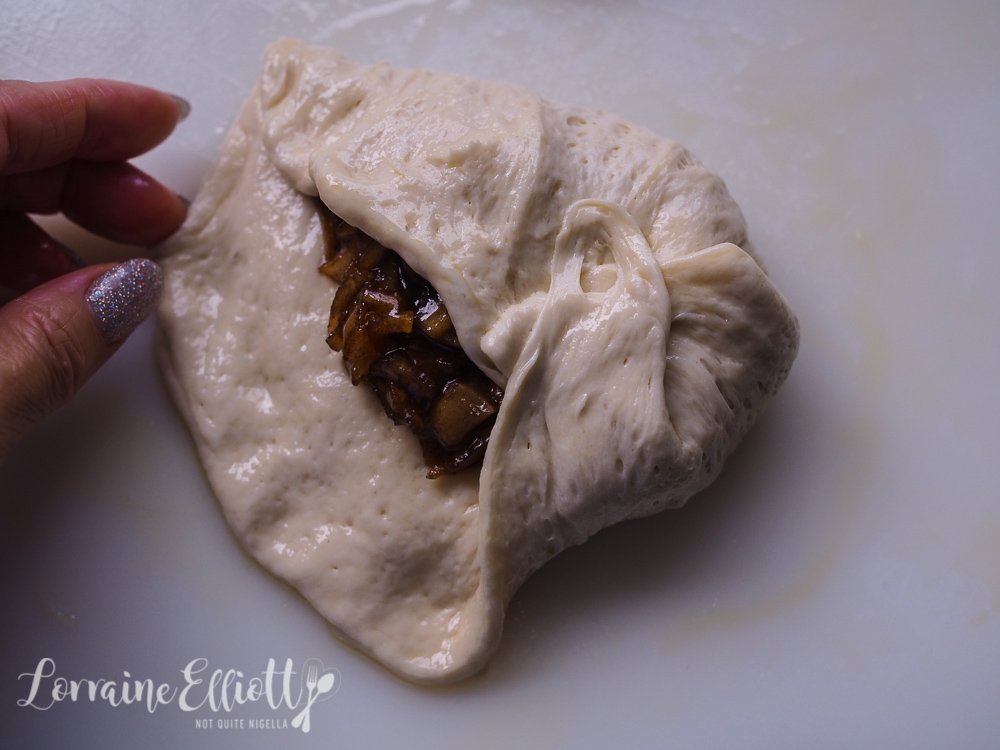 Closing up the rounds

Step 4 - Spread out one of the round dough making the edges a bit thinner. Fill with some apple filling and then close it up. 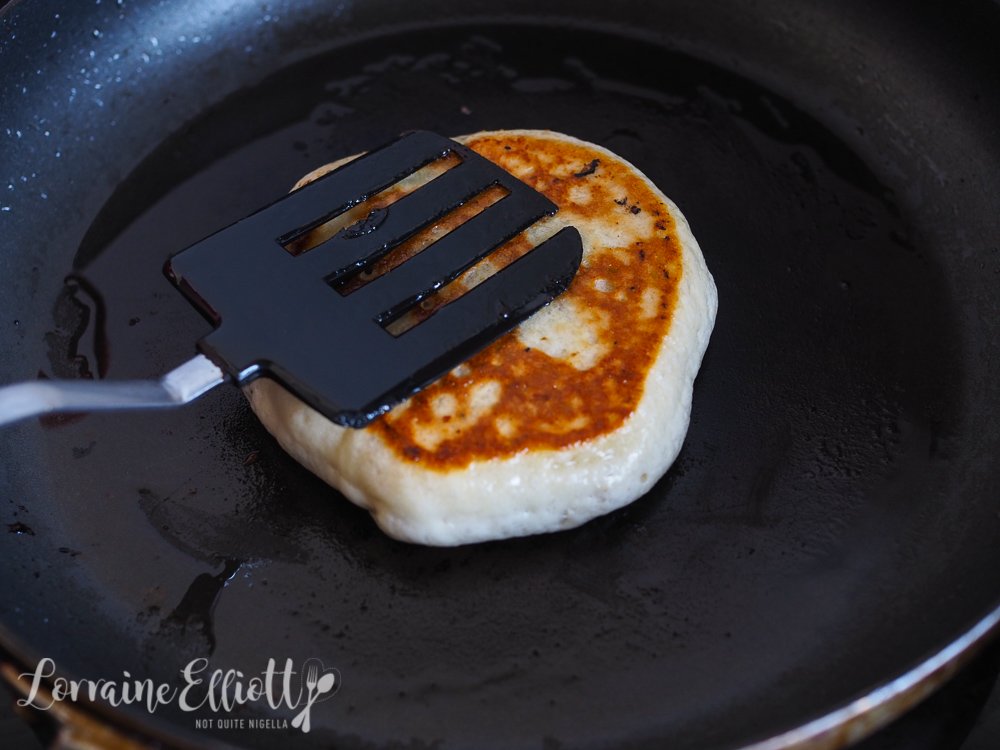 Step 5 - Add oil to the pan and fry the hotteok on one side until golden-about a minute or so. Then turn over and then place the lid on and allow the hotteok to cook for 3 minutes or until the sides are cooked. Make sure to gently press down the hotteok too. Repeat with remaining dough and apples. Serve hot with salted caramel syrup drizzled on top. 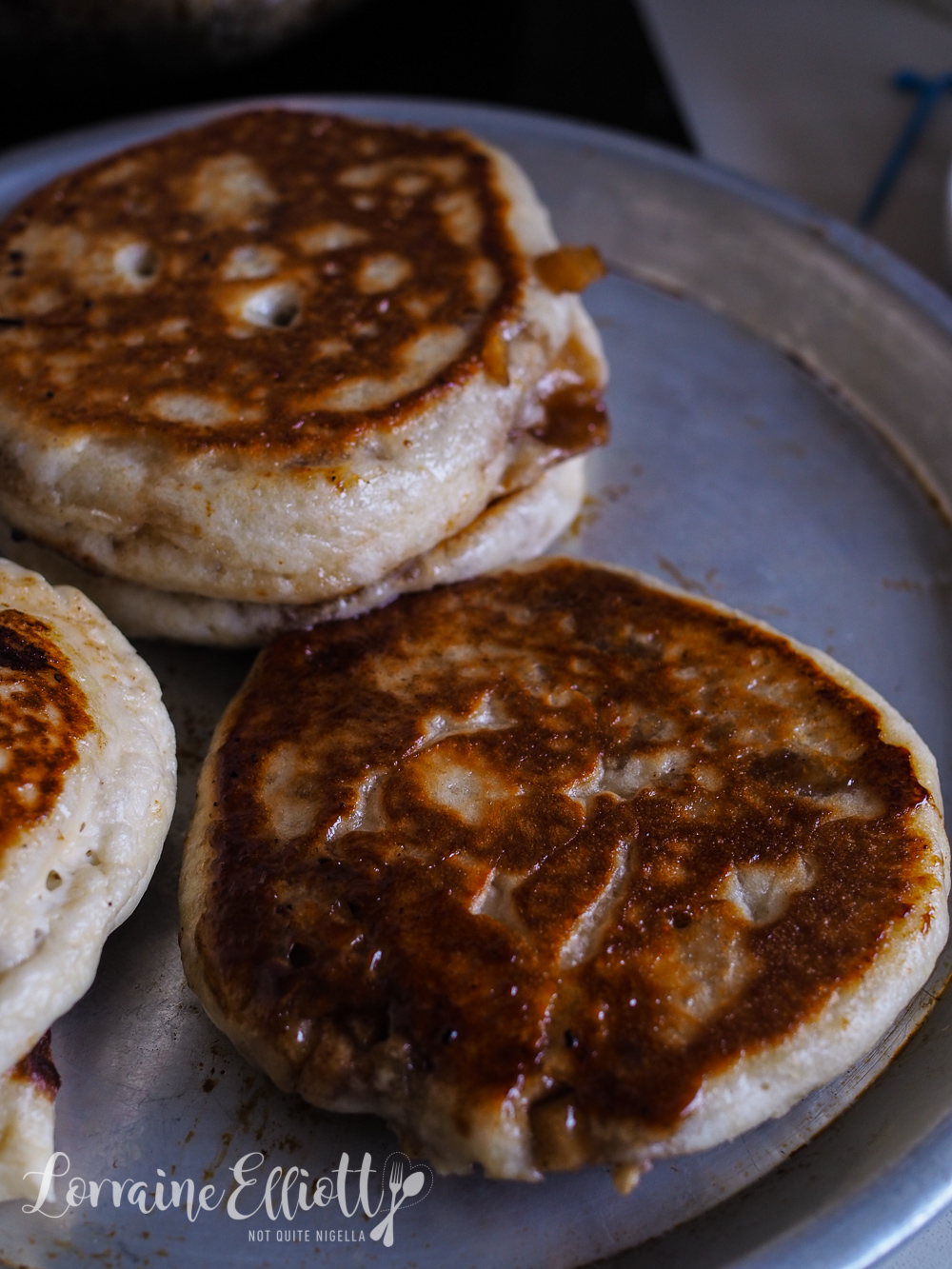 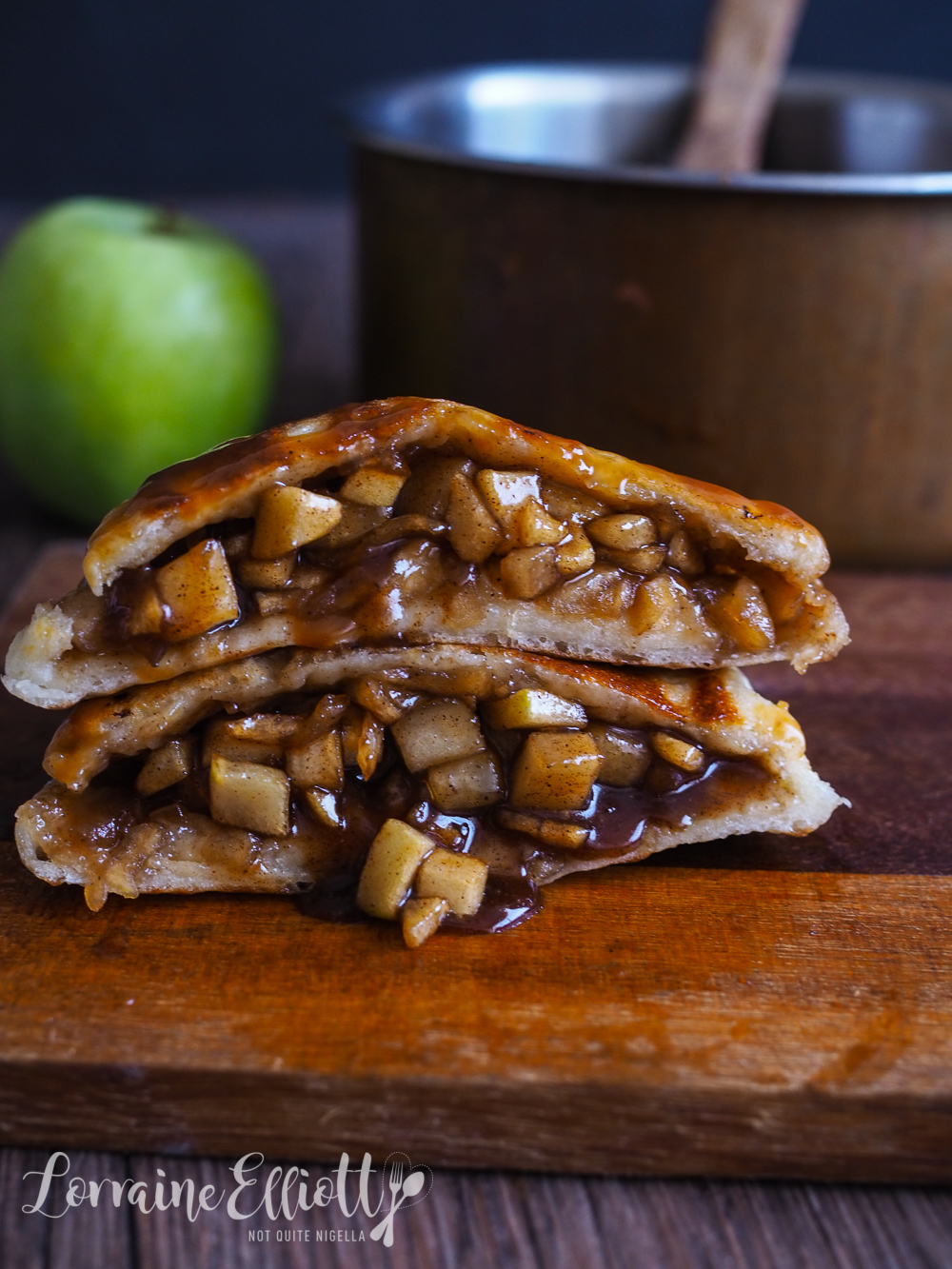