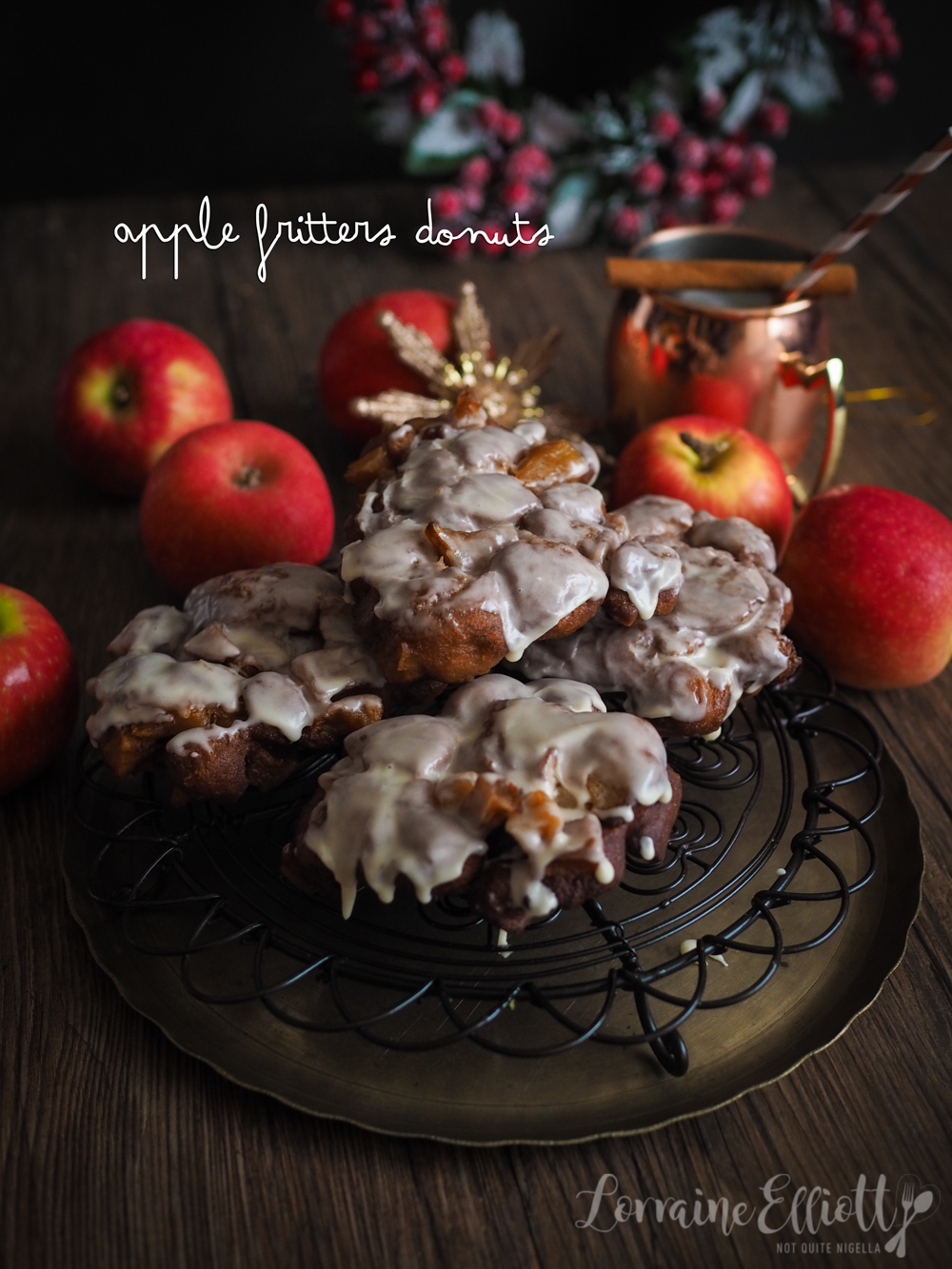 These Apple Fritter Donuts are full of softly cooked and spiced apple chunks held together by a rich, buttery spiced brioche dough and a delicious glaze made with Baileys Apple Pie liqueur. They're the sort of treat that will power you through the festive season or warm you up from the inside. They're the ultimate good mood food!

I used to see these fritter donuts at American doughnut shops a lot and we don't tend to get these fritters here in Australia. We do have fritters which are just a ring of pineapple or apple dipped in a beer batter which you can find at fish and chips shops but these apple fritters are donuts that have a chunky, knobbly and gnarled texture and are dripping in a delicious glaze.

Since La Nina decided to derail sunny Christmas weather, December has been about making food that you'd normally serve in Autumn and Winter which puts us in line with the Northern Hemisphere so I thought I'd make these. I was so happy with how these turned out-they looked and tasted just like the ones I had eaten in America! 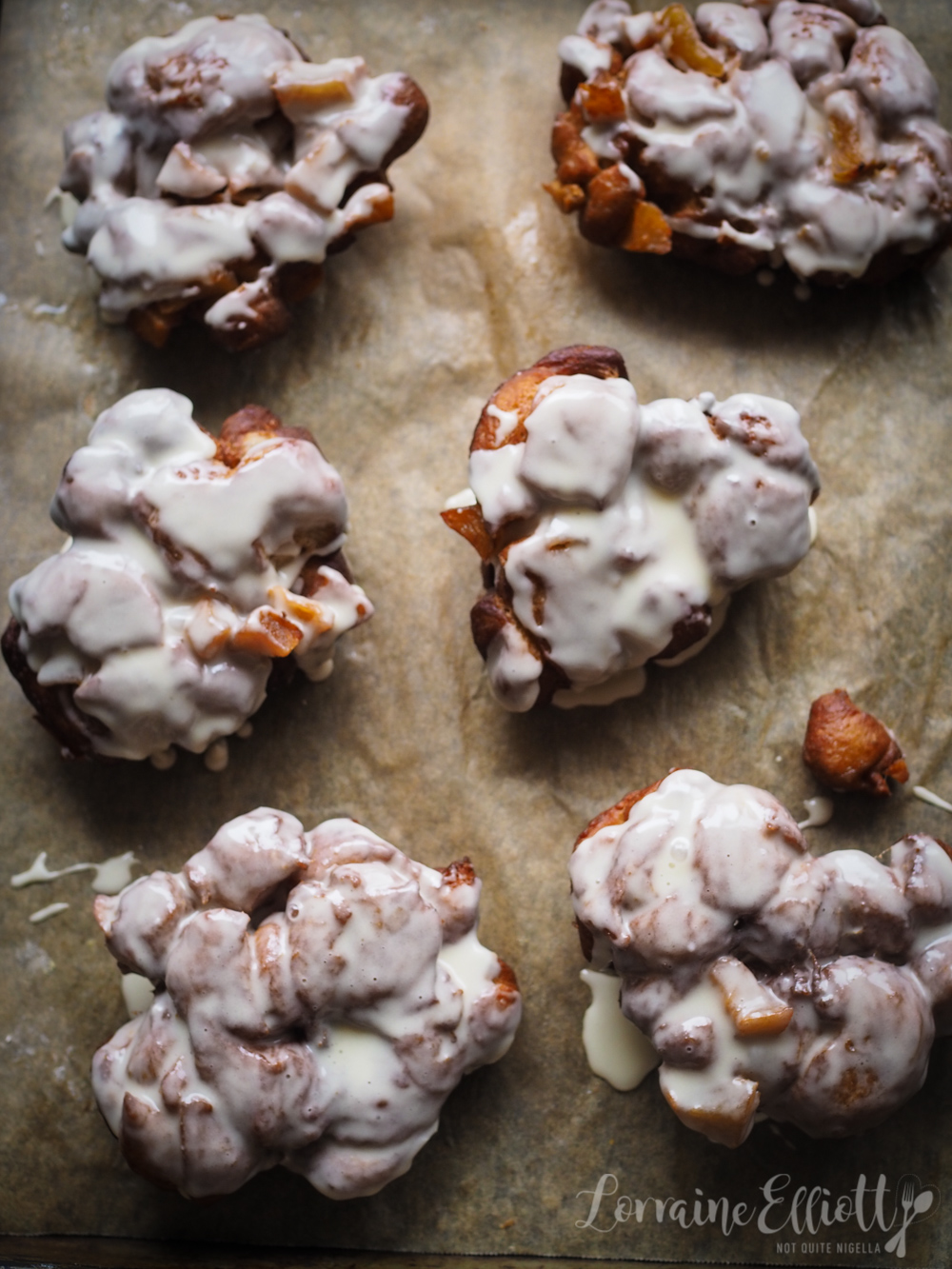 There are two types of dough recipes for this style of apple fritter: a quick one using baking powder and a version using a yeasted dough. I actually made both and the ones using baking powder were ok but nowhere near as nice as the yeasted version so that's the recipe that I'm sharing with you. Like all deep fried goodies, these are best eaten on the day that they are fried, preferably soon after they are cooked (and trust me, there will be no shortage of volunteers!). I did make a tangzhong roux in the dough to help these donuts stay soft for longer too.

1 - I made my apple fritter donuts using a brioche dough which is a richer dough but since it's Christmas coming up I thought that making them a bit more special. I also started these with a tangzhong roux just to help with the staying power of the donuts as fritters really don't last as long as other donuts. I added cinnamon to the dough to flavour the dough too.

2 - The most important part of making apple fritter donuts is to make sure that you tuck in as many apple pieces as you can. Please don't be tempted to add more apple chunks (I learned this the hard way), this is juuuust right! ;)

3 - Don't worry if some pieces of apple come loose during drying. This happens and don't stress about it. They're delicious on vanilla ice cream!

4 - Keep the oil temperature consistent at 180C/350F by only frying two at a time. They only need 2 minutes on each side at this temperature. If your oil gets too low in temperature the donut soaks up more oil.

5 - Sometimes when frying donuts they do not want to turn over and want to stay frying on the first side. To avoid this happening gently spoon some hot oil over the donut when it is frying on its first side using a large spoon. Then when it comes to turning them they'll stay turned.

6 - This recipe below makes 6 donuts but you can easily double this to make more. Apple fritters are best eaten on the day, otherwise wrap these in greaseproof paper and freeze and the good thing is that you'll never be far from a delicious apple donuts! 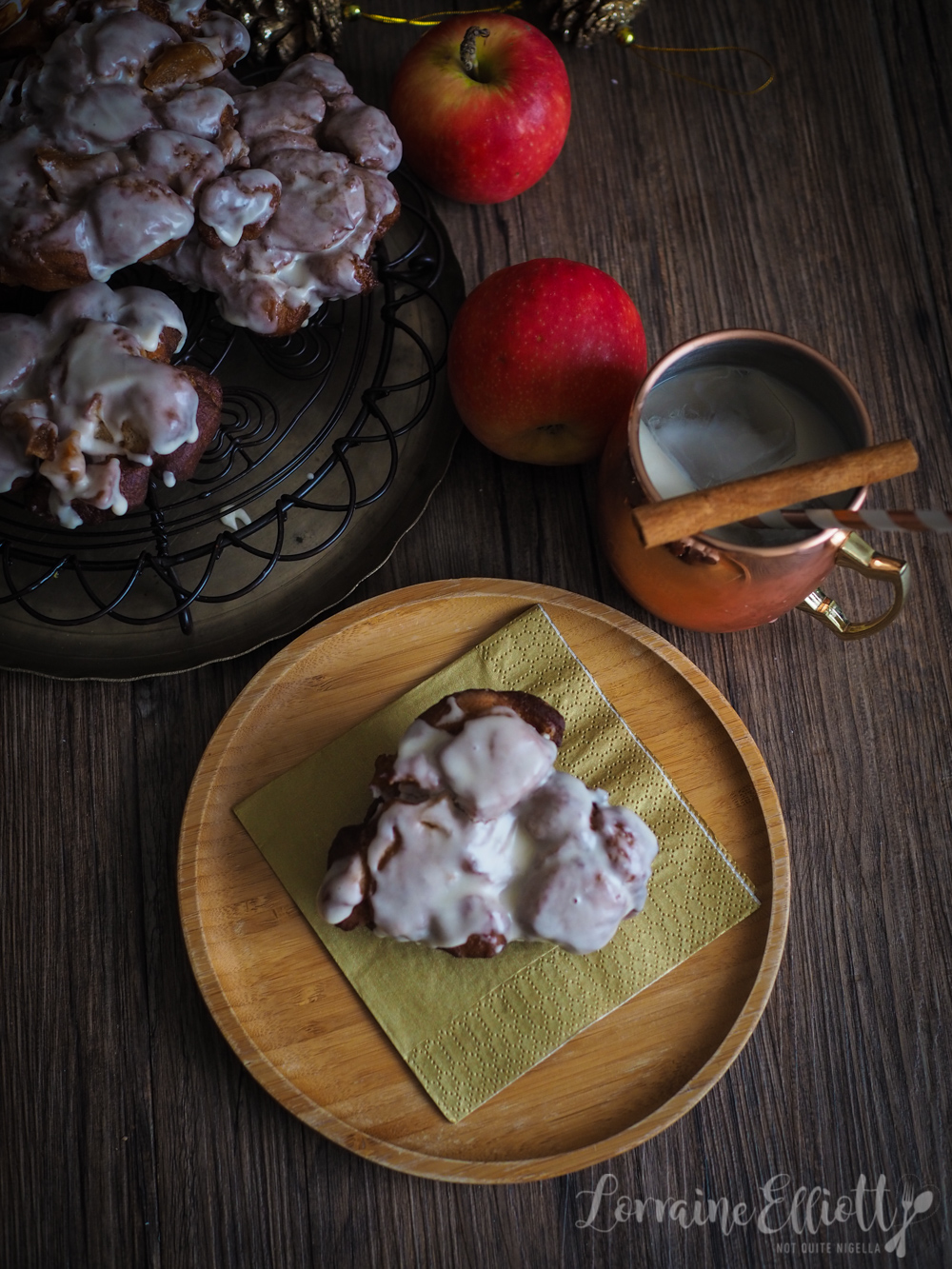 I loved these donuts as they brought back memories of travelling. It has been a very busy few weeks as I'm sure it has been everyone as Christmas looms. It hasn't been all work though and during this busy pre-festive season I saw the musical Hamilton with Monica and Marco. We had originally booked tickets to see it months ago long before COVID 2021 and we had originally bought tickets to a matinee (which is why Mr NQN wasn't coming as he was windsurfing). I had heard amazing things about Hamilton and was very excited to see it. I was intrigued by the idea of a rap and hip hop musical of the history of America with a young, racially diverse cast (diversity in casting being a big issue in musical theatre).

Some people had told me that I had to read up about the background of Alexander Hamilton while others had said that I would understand it without having to know the story. I know very little about Alexander Hamilton (actually I would say I know nothing about him apart from that there's a musical about him!) and my cursory knowledge of American history is gleaned from tv shows and movies. And the person that told me I didn't have to read up about him was Ivy who is American. If you're going to see Hamilton I would say a quick look at his wikipedia page is a good idea although you can glean enough from the show. 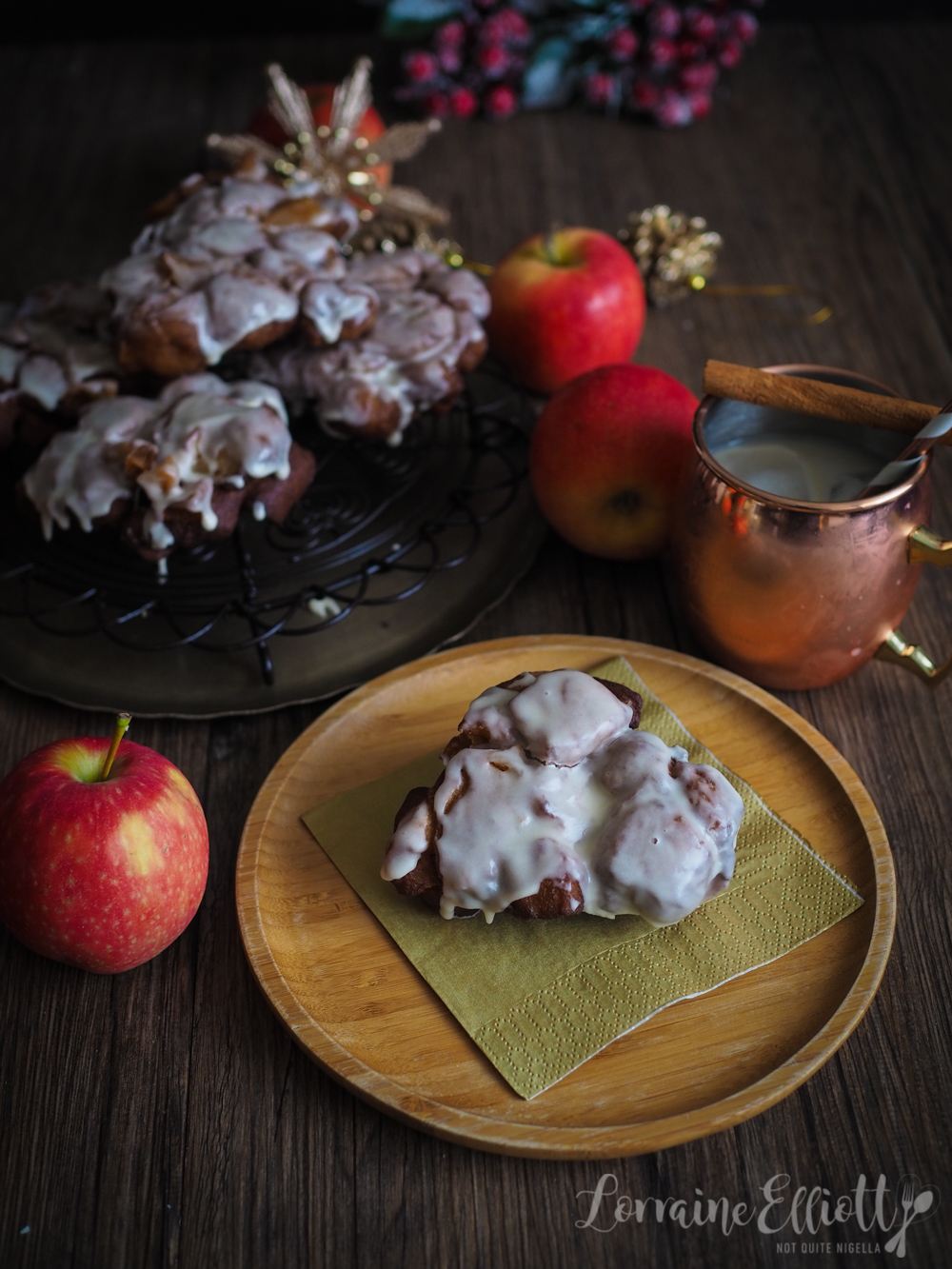 Hamilton is a musical with a lot of songs with not a lot of dialogue between songs so if you love a musical with lots of songs this is for you. Also having high expectations can kill a musical for me. I remained nonplussed by the Book of Mormon which I know a lot of people loved. My favourite musical by a mile is Wicked followed by Rent. I also loved irreverent musicals like Avenue Q but I'm very much far from a musical connoisseur.

I'm the most basic musical watcher, the equivalent of your dad at lunch who either gives a meal a thumbs up or doesn't. All I can offer you apart from it is very enjoyable and you have to see it for yourself, is that you should also avoid the choc tops on sale during intermission because they are terrible. And that Dear Reader is why I write about food rather than musicals!

So tell me Dear Reader, have you seen Hamilton? Are you a musical connoisseur and if so, what is your favourite musical? And have you ever tried an apple fritter? 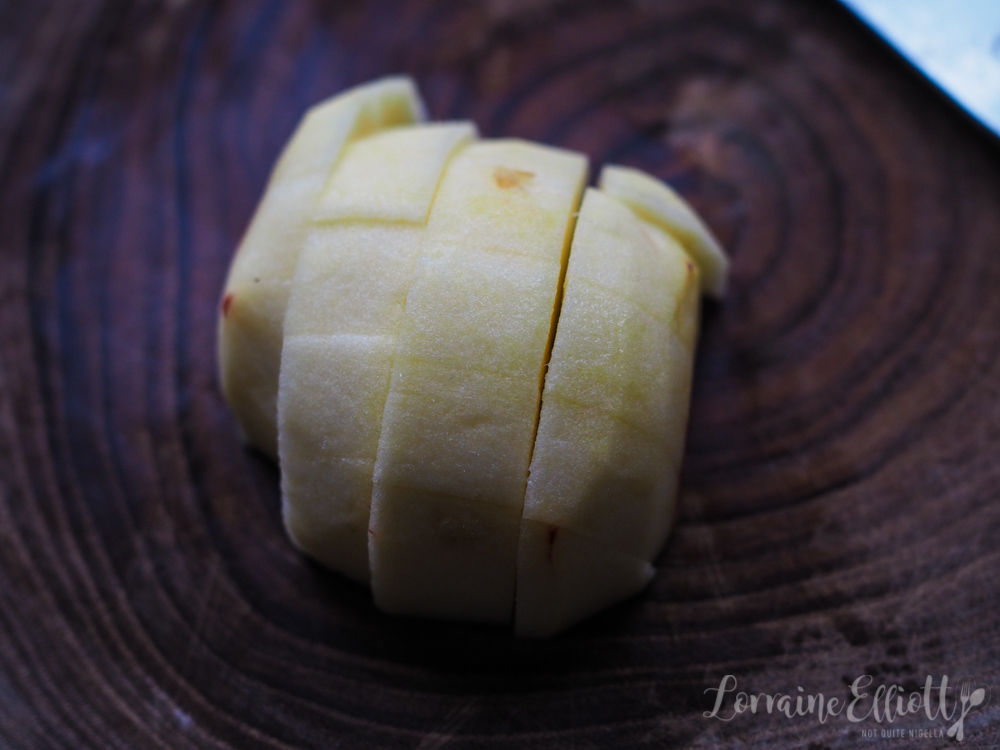 Step 1 - First make the apple filling. Peel, core and chop the apples into 1cm cubes. Place in a saucepan and heat on medium heat and cook for 5 minutes. Add the sugar, vanilla, cinnamon and nutmeg and simmer until the apples release their juice and are softened. Cool and strain well (save the syrup for cocktails). You can do this step 1-2 days ahead of time. 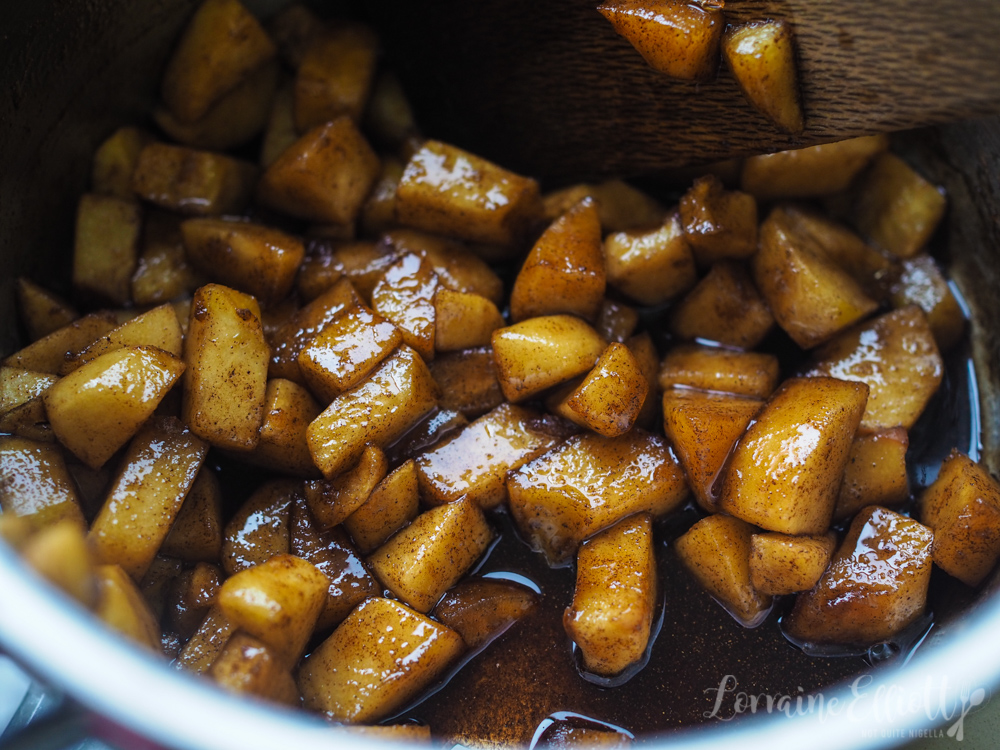 Step 2 - Add the 20g/0.7oz. or flour and water in a small saucepan and heat to 65C/149F and whisk until you get a smooth, creamy mixture. Remove from heat and whisk in the egg and salt. 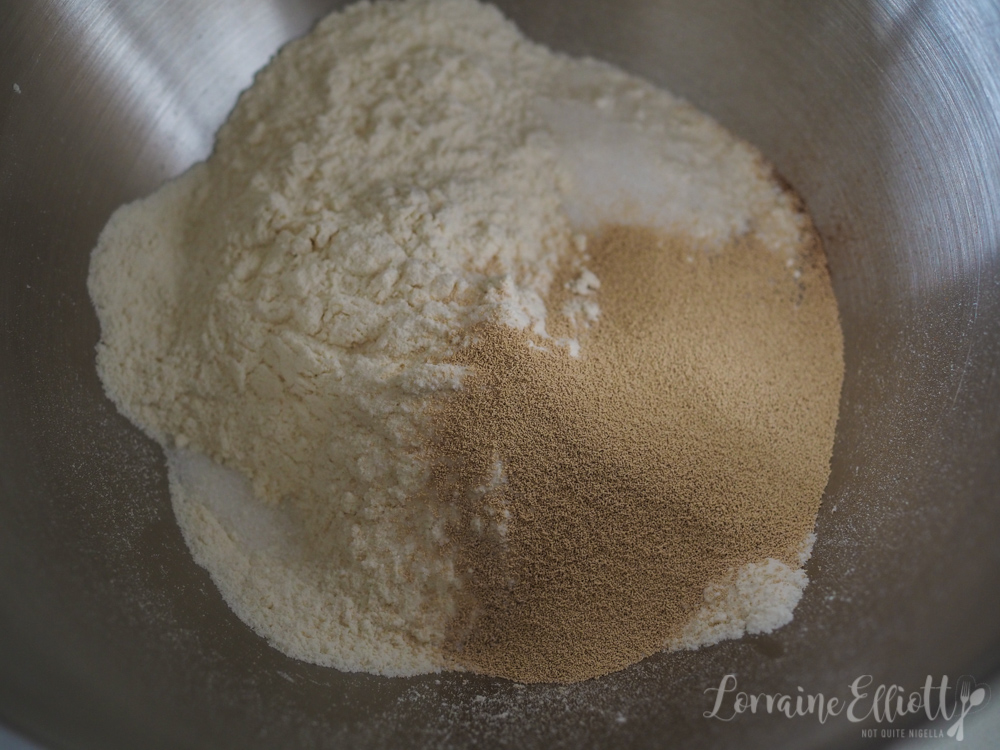 Step 3 - In a mixer bowl whisk the flour, yeast, sugar and cinnamon. Pour in the mixture from the saucepan and mix until shaggy. Add the 30g/1oz of butter and knead on low speed for 5 minutes. Add the remaining 60g/2oz. of butter and knead on medium speed until the dough pulls away from the edge and is no longer sticky. It should be pliable, easy to handle and not sticky. 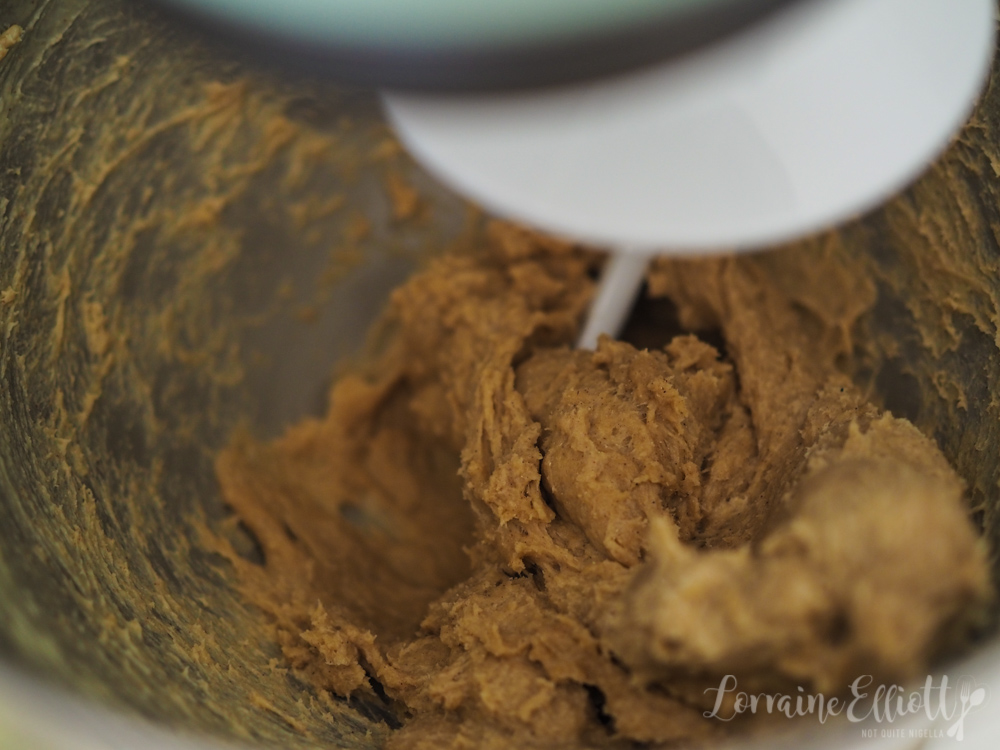 The dough goes from sticky... 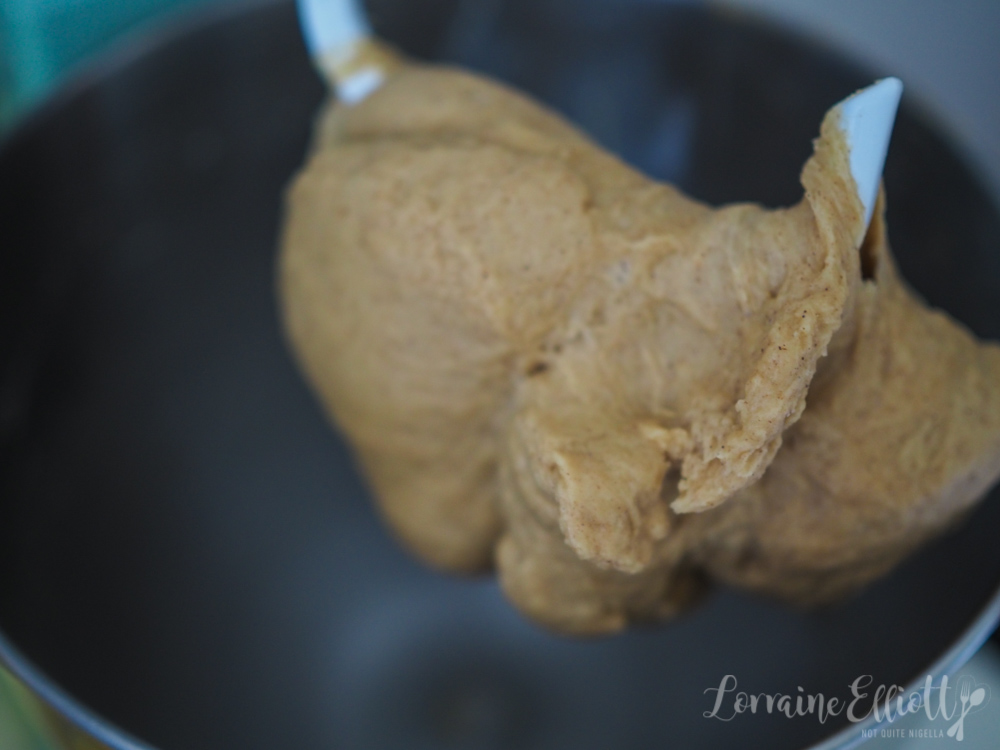 To cohesive and easy to work with

Step 4 - Place in a large bowl and cover allow to rise til 2-3 times its size in a warm area for around an hour. Punch down the dough and roll out to a large rectangle. Spread apples over half of the dough and fold over and chop up into squares with a sharp knife. 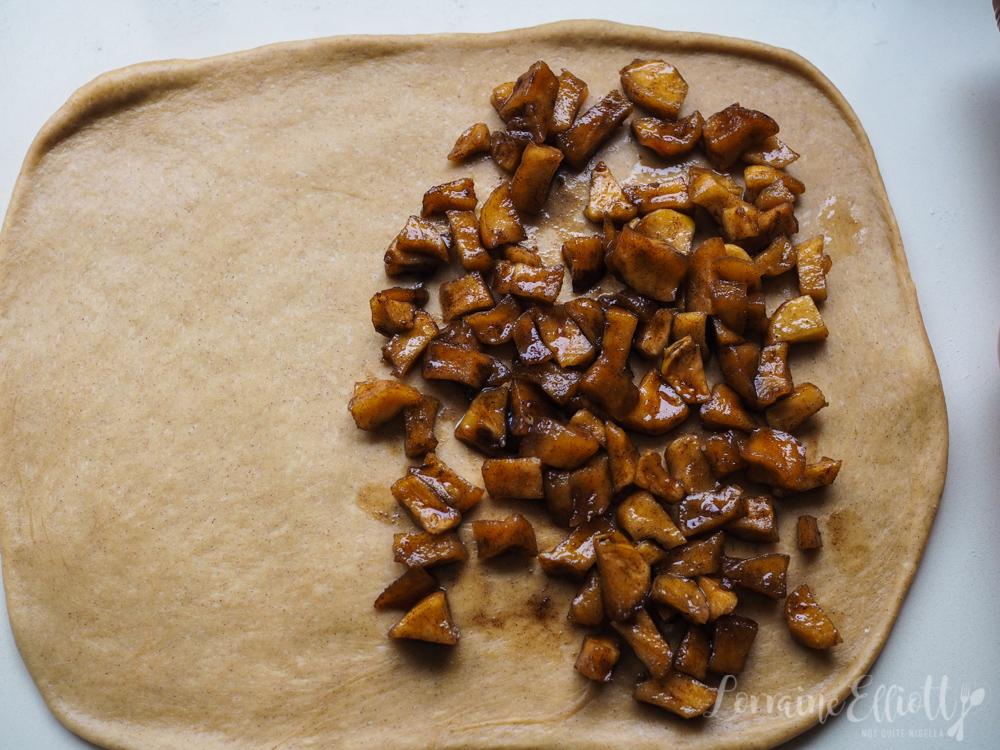 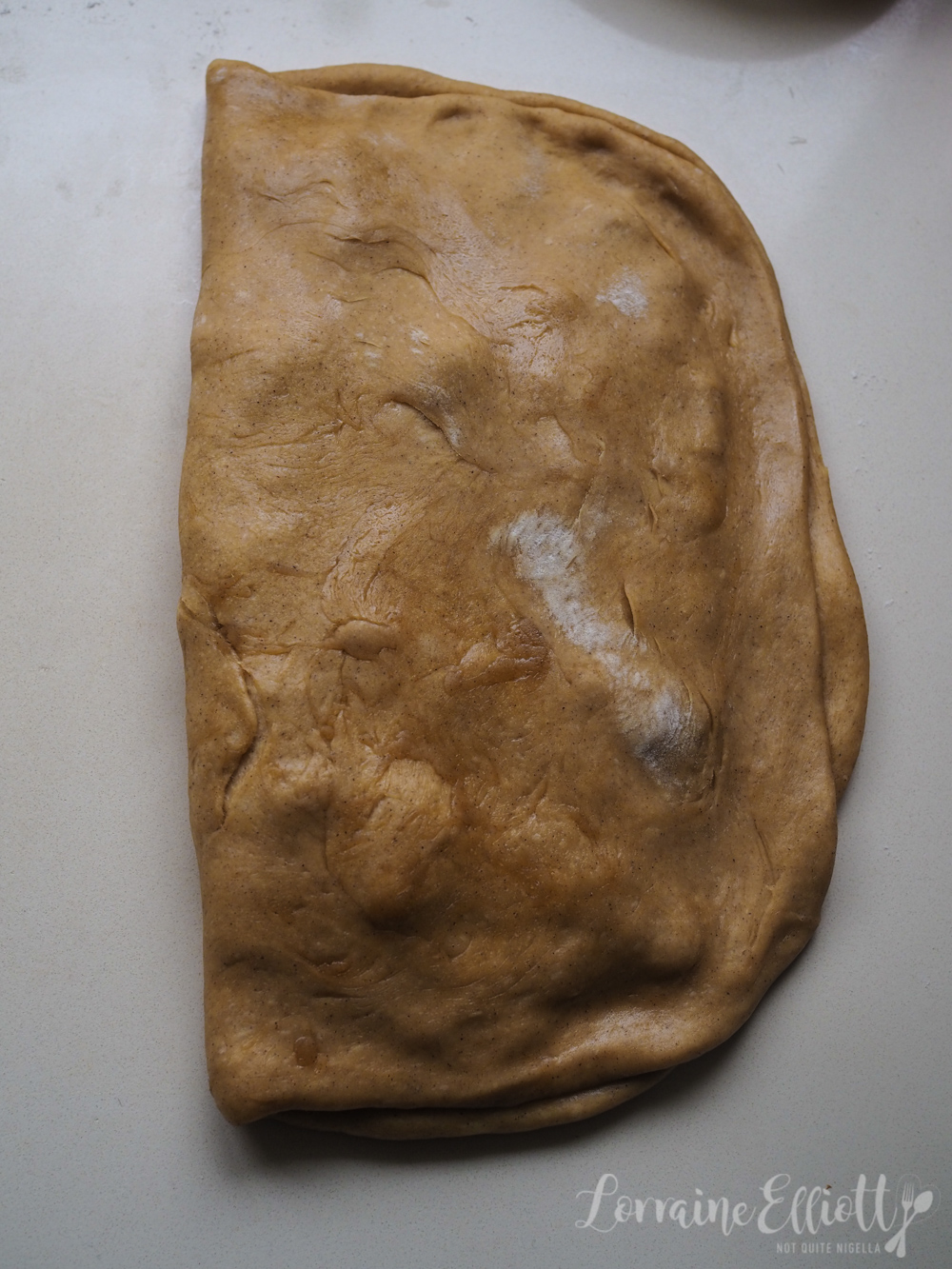 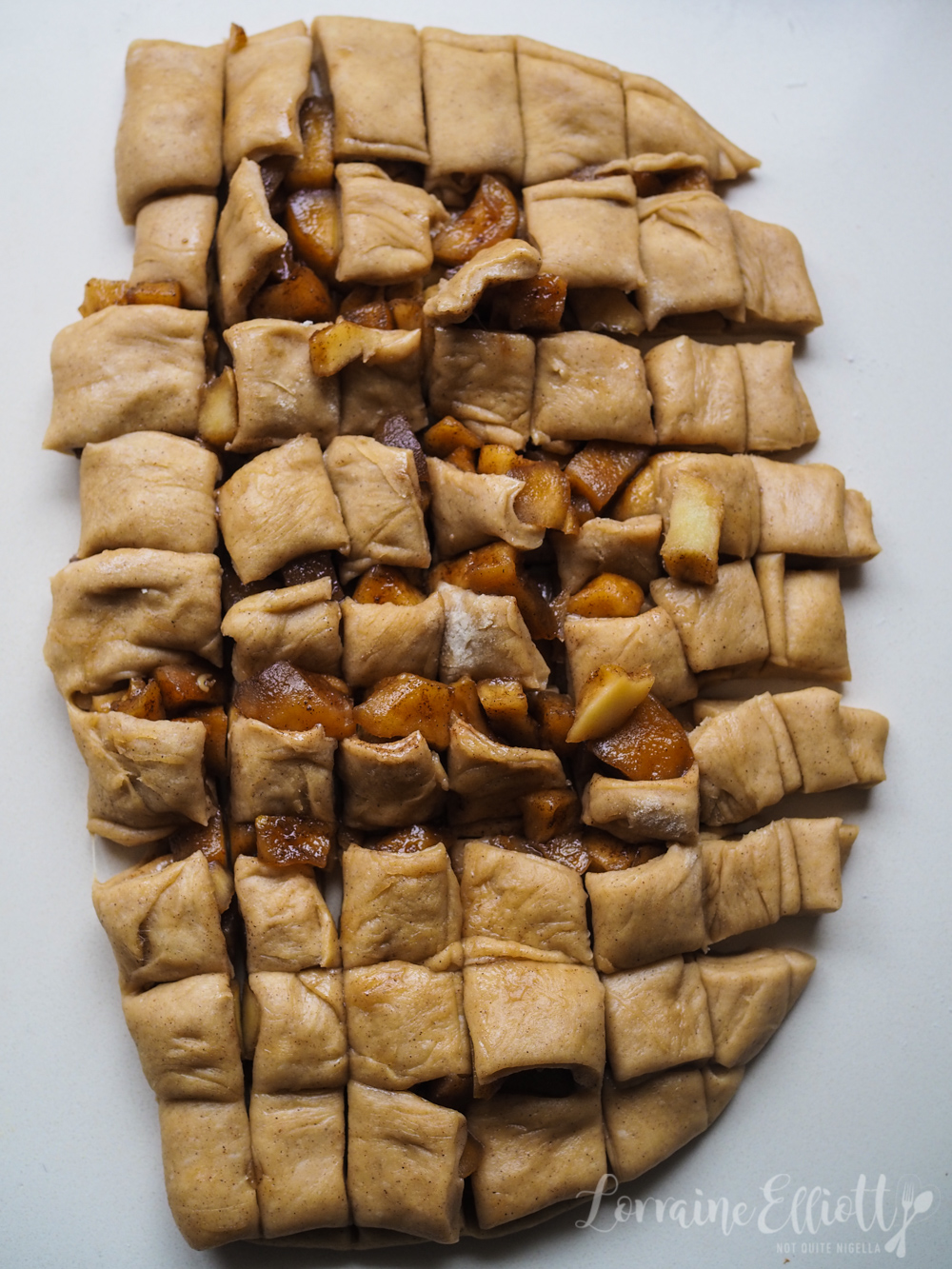 Step 5 - Line a large baking tray with parchment. Roll this mixture into a log with the extra flour and shape into balls and flatten slightly. Make sure that the apples are tucked inside the dough bits and place on the tray. Allow to rise for 20 minutes until puffy. 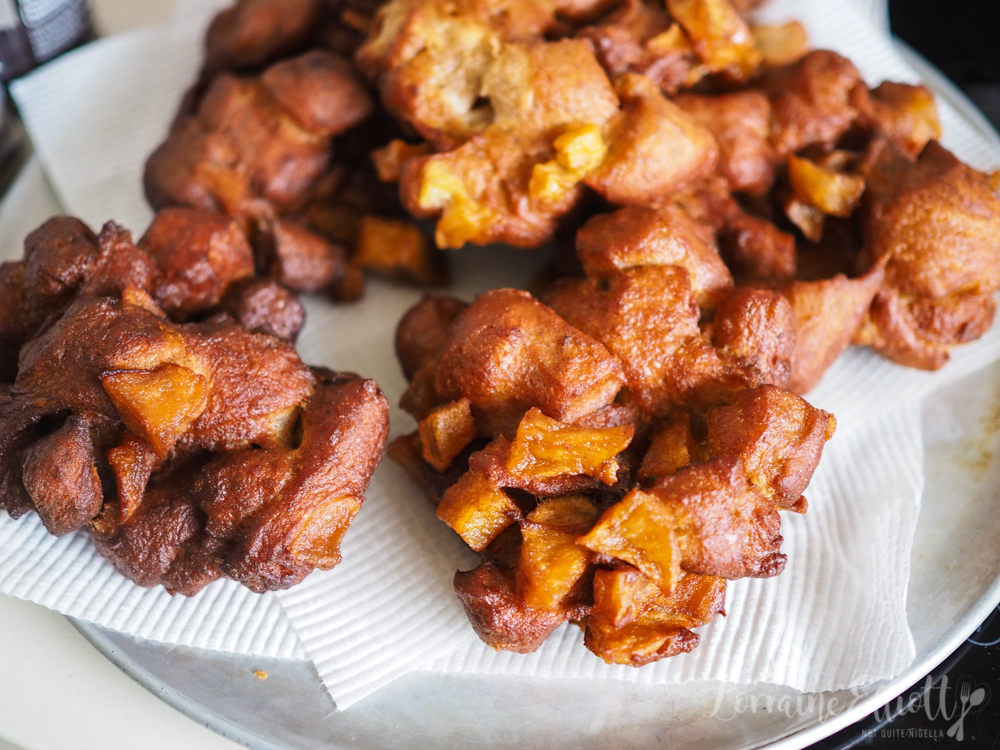 Step 6 - Heat 1 litre of oil in a cast iron pot or a deep fryer. When it reaches 180C/350F place donuts in 2 at a time so as not to overcrowd the pan and make the oil temperature drop. Gently spoon some of the hot oil over the exposed top with a large spoon, this makes them easier to cook on the other side. Cook for 2 minutes on each side. Place on paper towels to drain. 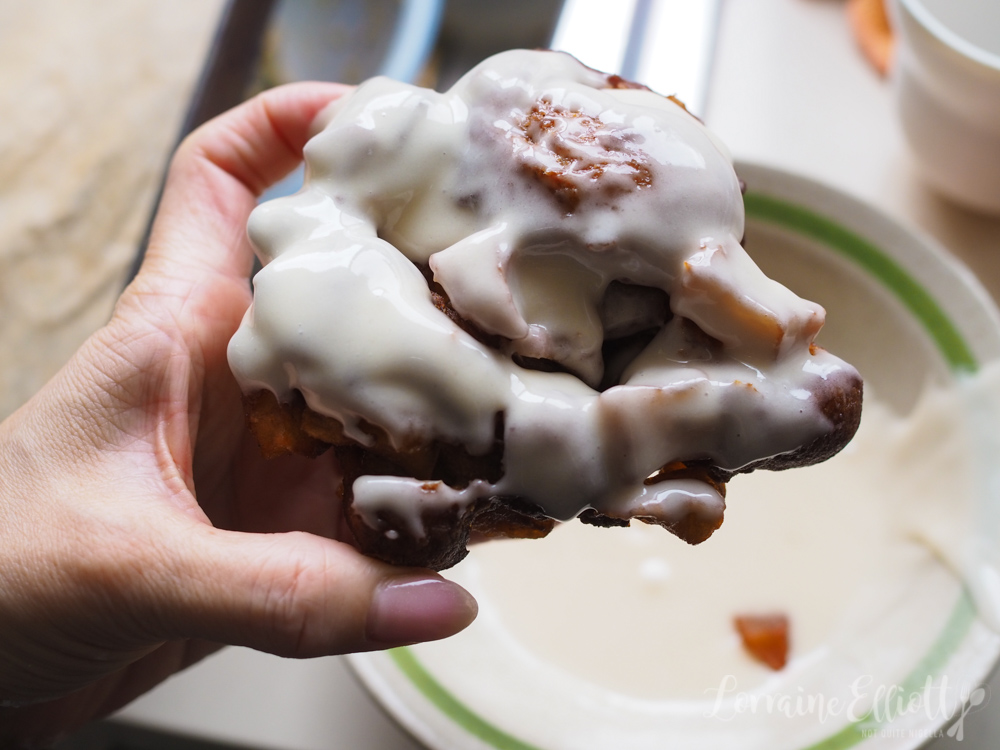 Step 7 - Sift the icing sugar and mix with the @baileys and water until you get a dippable glaze. Dip one side of the fritters in the glaze and serve. These are wonderful served warm. 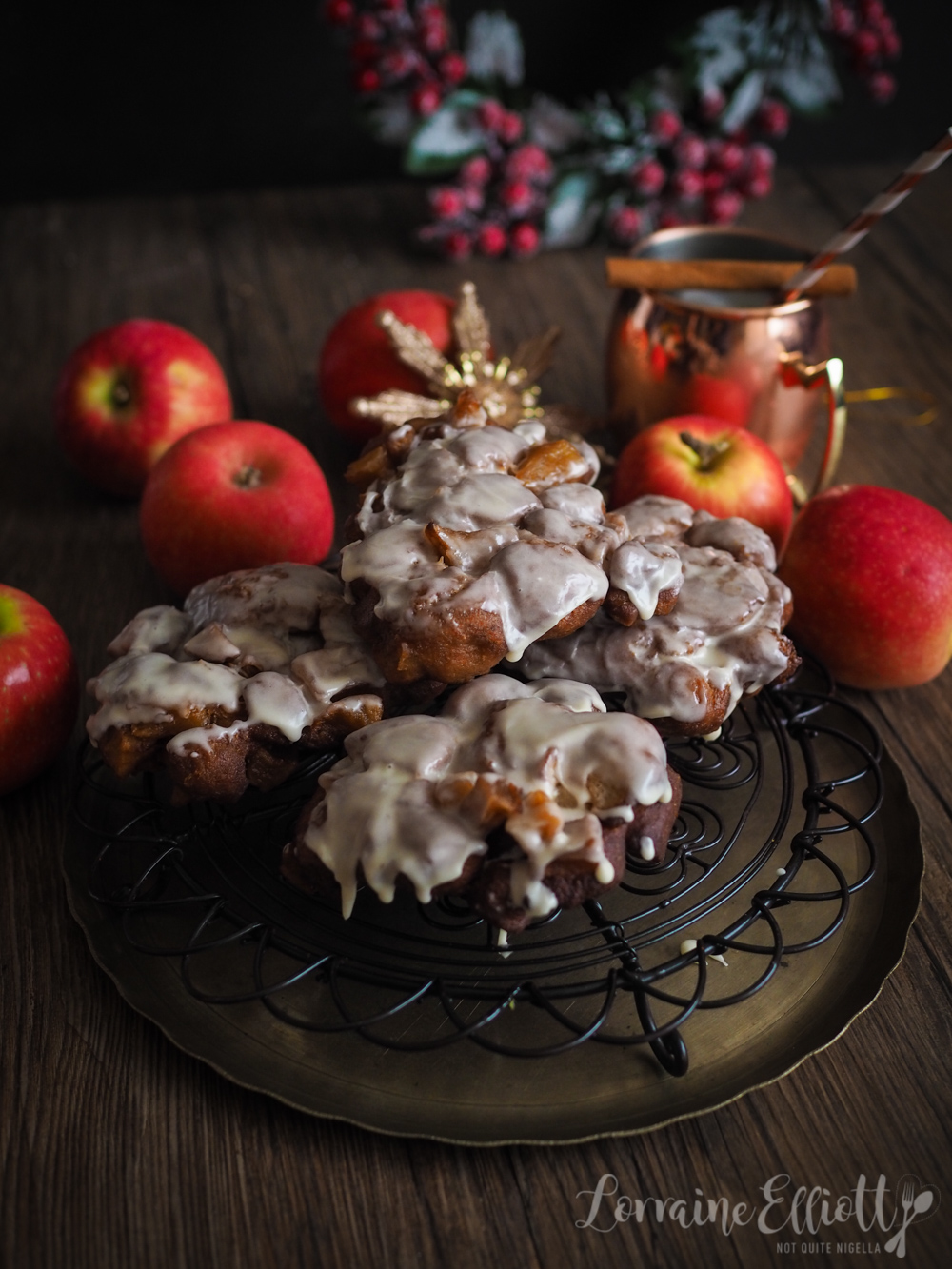