Noodle Me This - Killiney Kopitiam, Chippendale 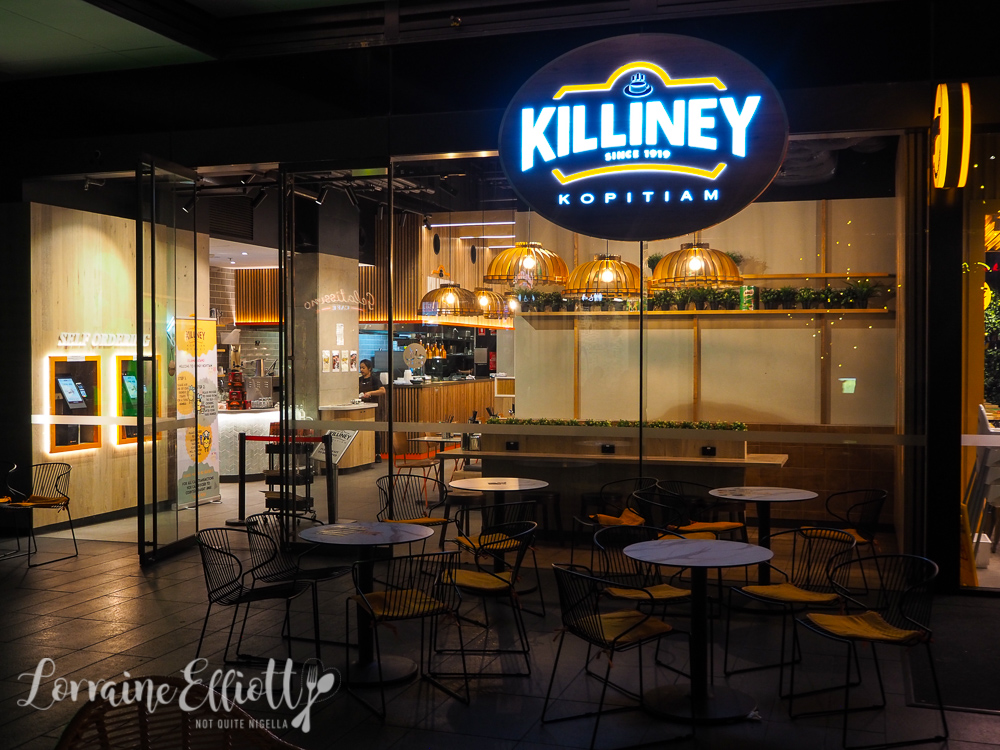 Craving Singapore food? Killiney Kopitiam is a Singaporean based chain of Singaporean eateries established in 1919 on Killiney Road. They have just opened up their first location at Sydney's Central Park. You can order via the large touch screens from Singaporean classics like Hainanese chicken rice, char kway teow and black and white carrot cake all washed down with a cold Milo or barley drink. 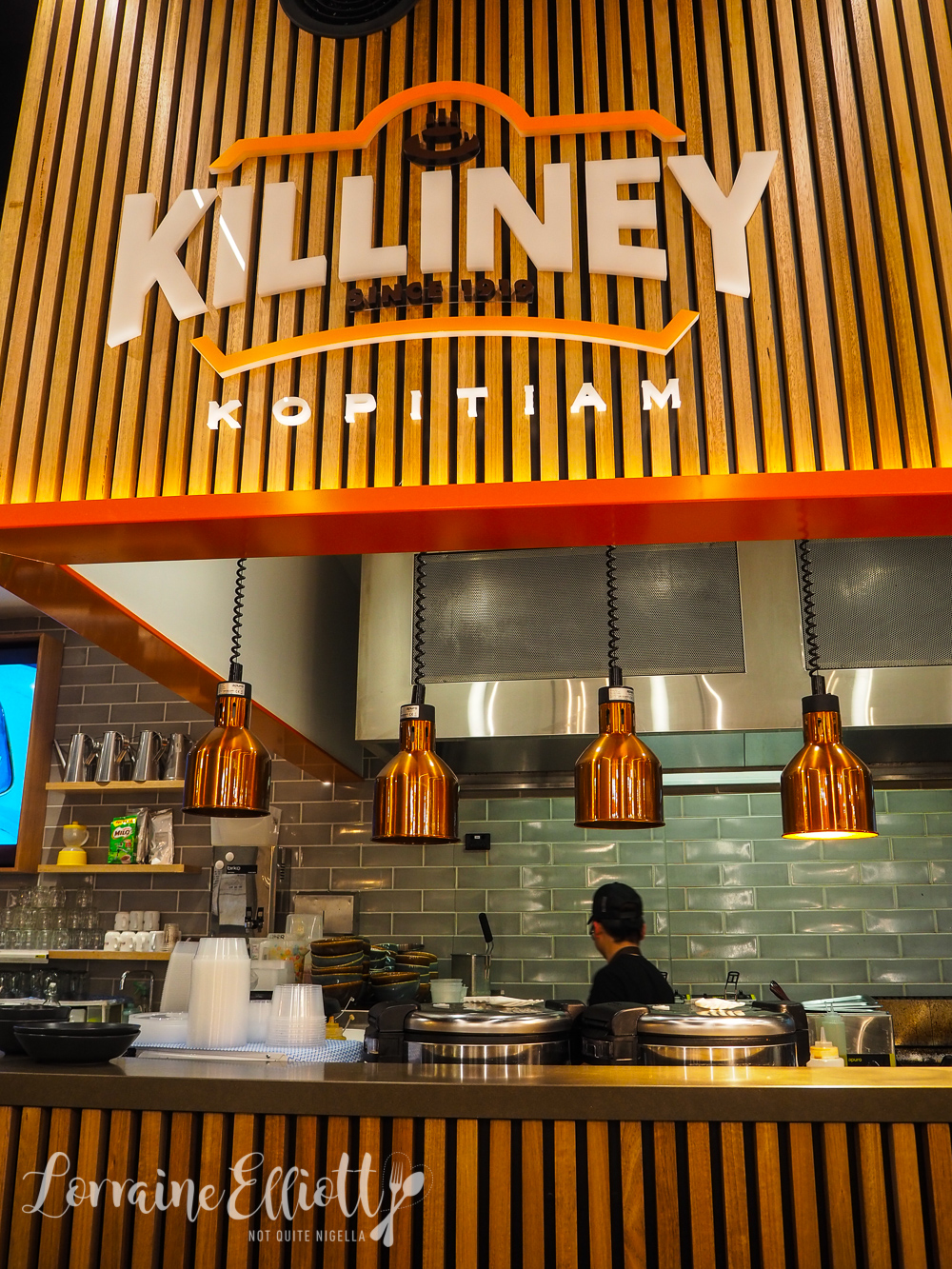 "Where are we going again? Something about a cat?" says Mr NQN as we are on our way to Killiney Kopitiam in Chippendale. It is located on the lower level of the Central Park shopping centre right next to Woolworths. There are booths as well as a large table. Mr NQN sniffs the air and says wide eyed, "Durian...". 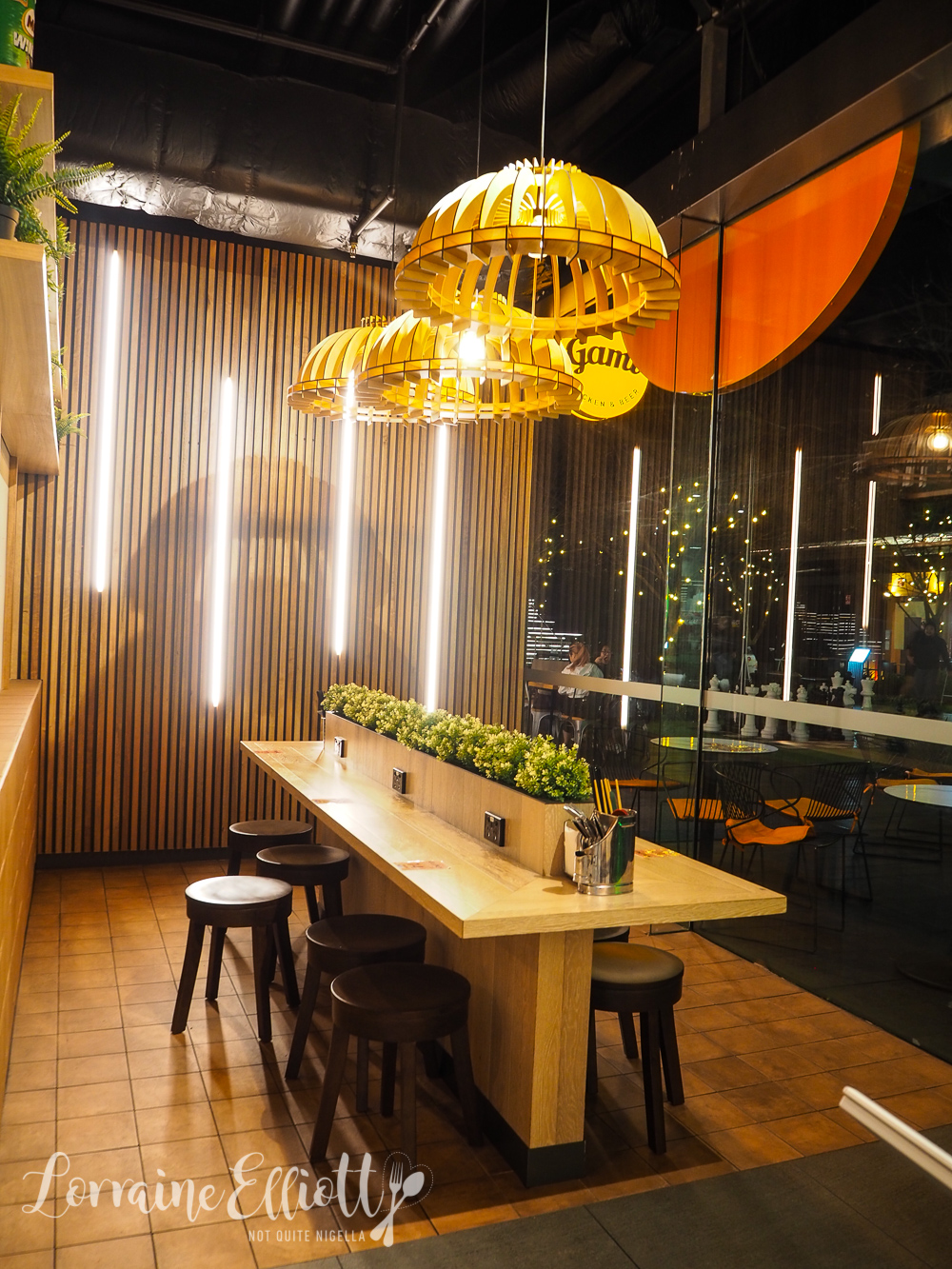 Ivy and Ryan arrive and we take a look at the menu. There are recommendations denoted by a thumbs up and they tell us the best seller is the char kway teow. Prices are around $10-$11 for each plate so we decide to go a little crazy. "You know even though we have a big table it doesn't mean that you have to fill every inch of it," Ryan says. "Yes it does," I tell him solemnly because honestly you'd think we'd never met before. 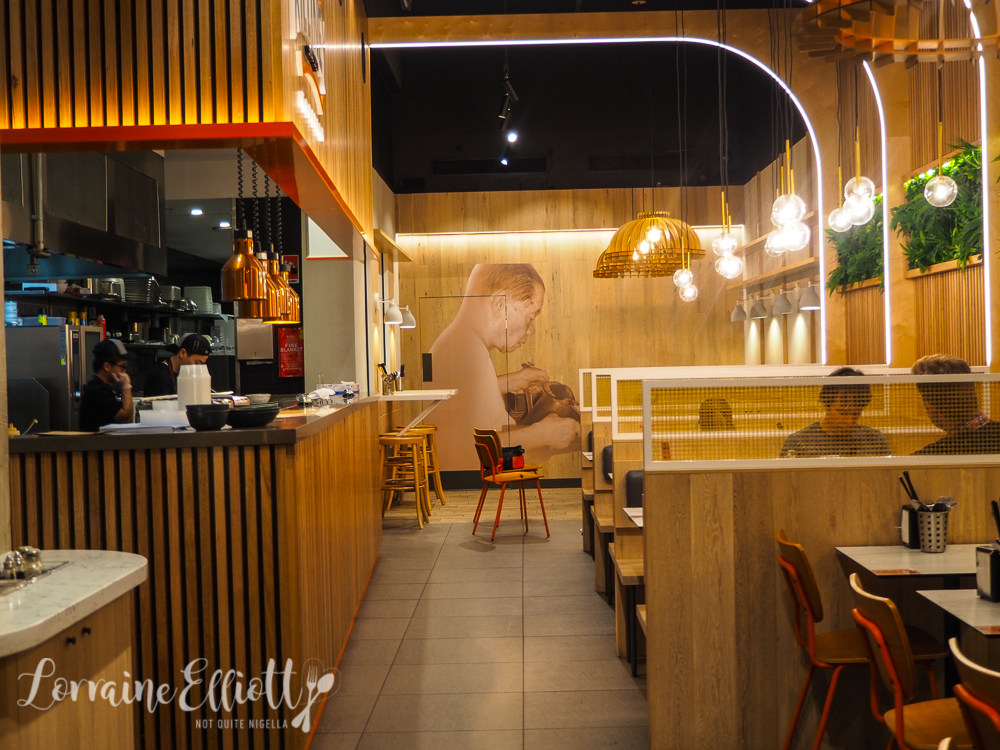 Ivy and I walk up to one of the two touch screen menus and to start you need to enter your phone number (you can also order as a guest or with the staff). The screen spits up a suggestion straight away and it's for the soft shell crab laksa which Ivy was just saying that she wanted to try. "How did they know that?" she asks, "Were they listening???". 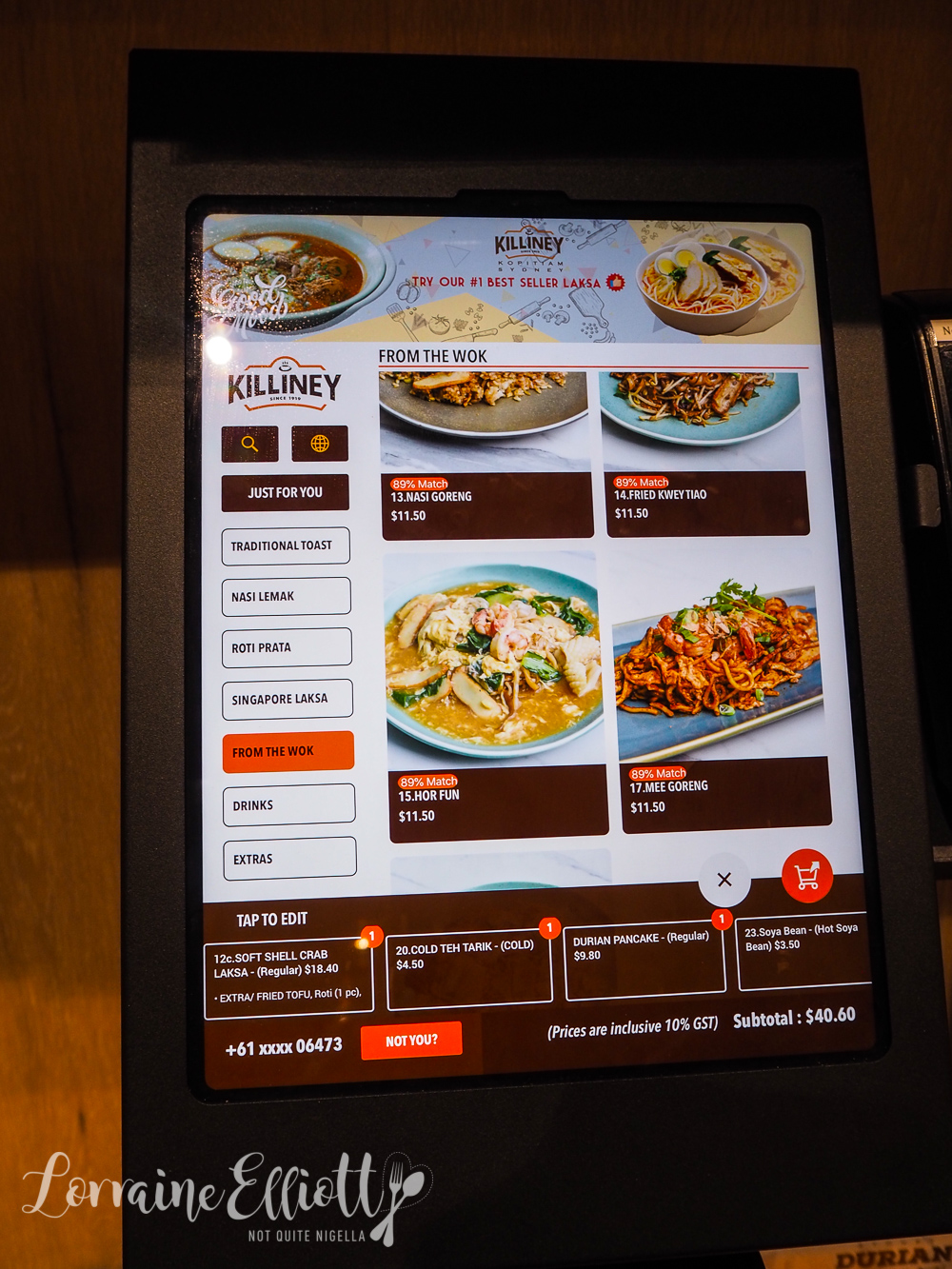 The website details items like Singapore chilli crab but this isn't on the menu. There are a lot of upgrades and you can add roti, soups or other things. The ordering system is easy to use and there are staff on hand to help although you can't do split bills at the end. 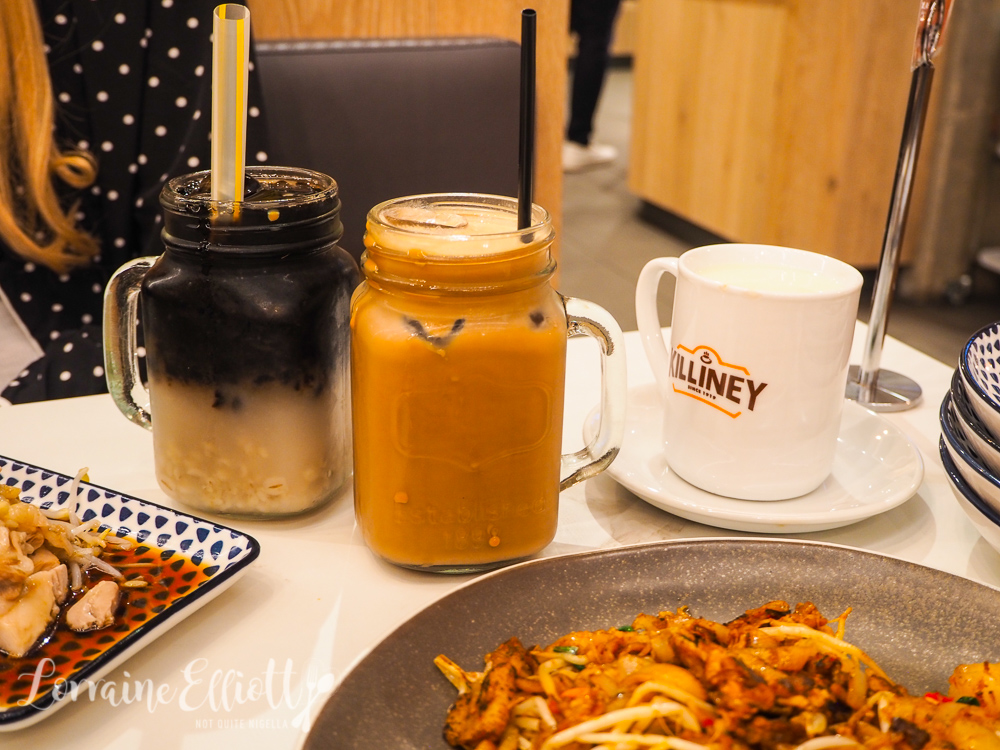 I love Asian soy milk so much more than the non Asian counterpart. When I first tried non Asian soy milk I was unimpressed at how it tasted so I ordered this both for nostalgia and also so that Ivy and Ryan could try it. Asian soy milk comes already sweetened and is less thick and more like regular milk in texture. Mr NQN enjoys his barley drink with grass jelly (a slightly sweetened herbal flavoured jelly) and Ivy likes her teh tarik. 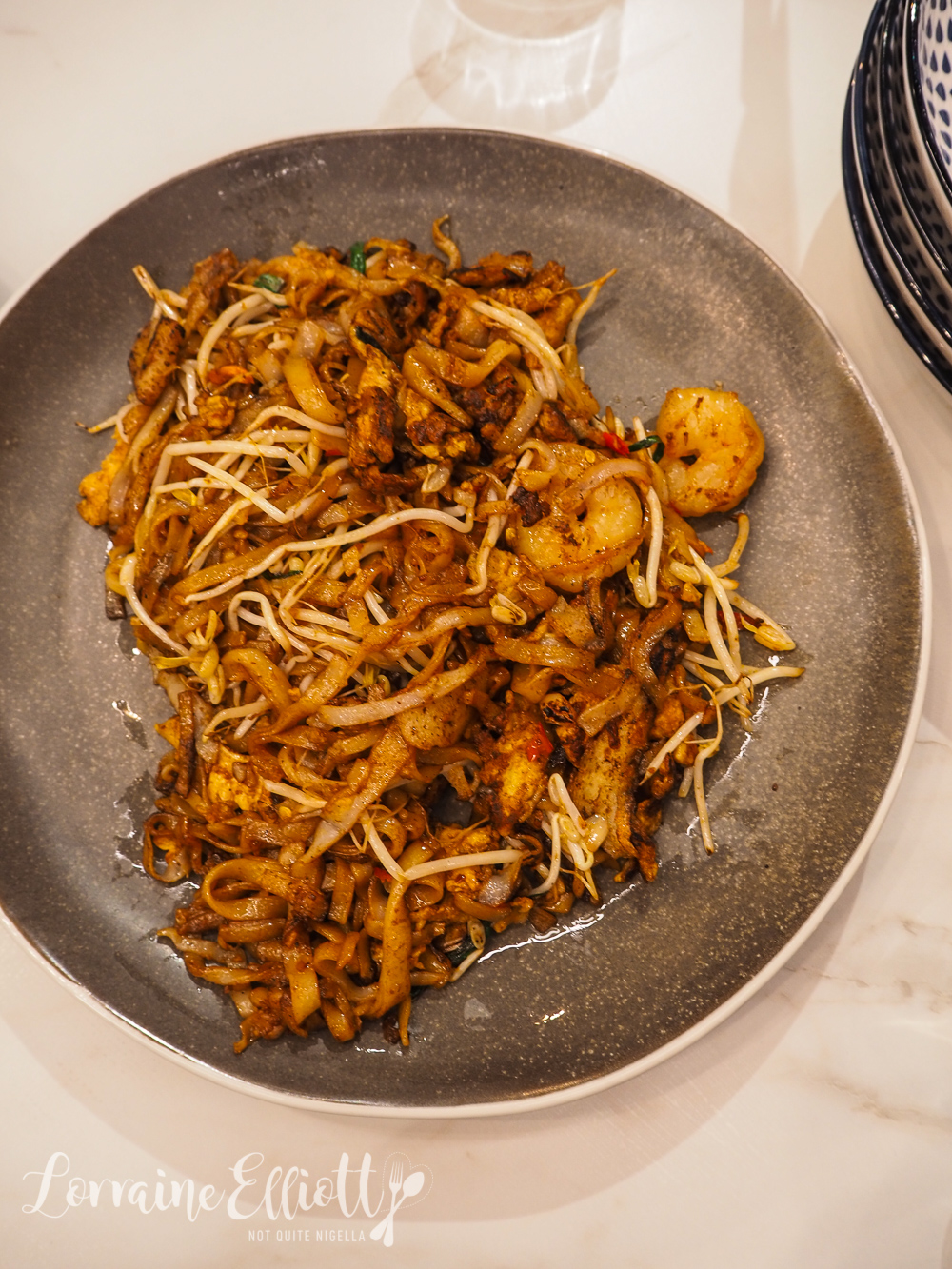 The most popular dish is the fried kway tow and funnily enough the beef version costs more than the seafood version. I may have hit the extra spicy button on this and it was spicy but not too fiery. There is a modest amount of seafood and there isn't any lup cheong and I like more smoky breath of the wok especially with this dish. 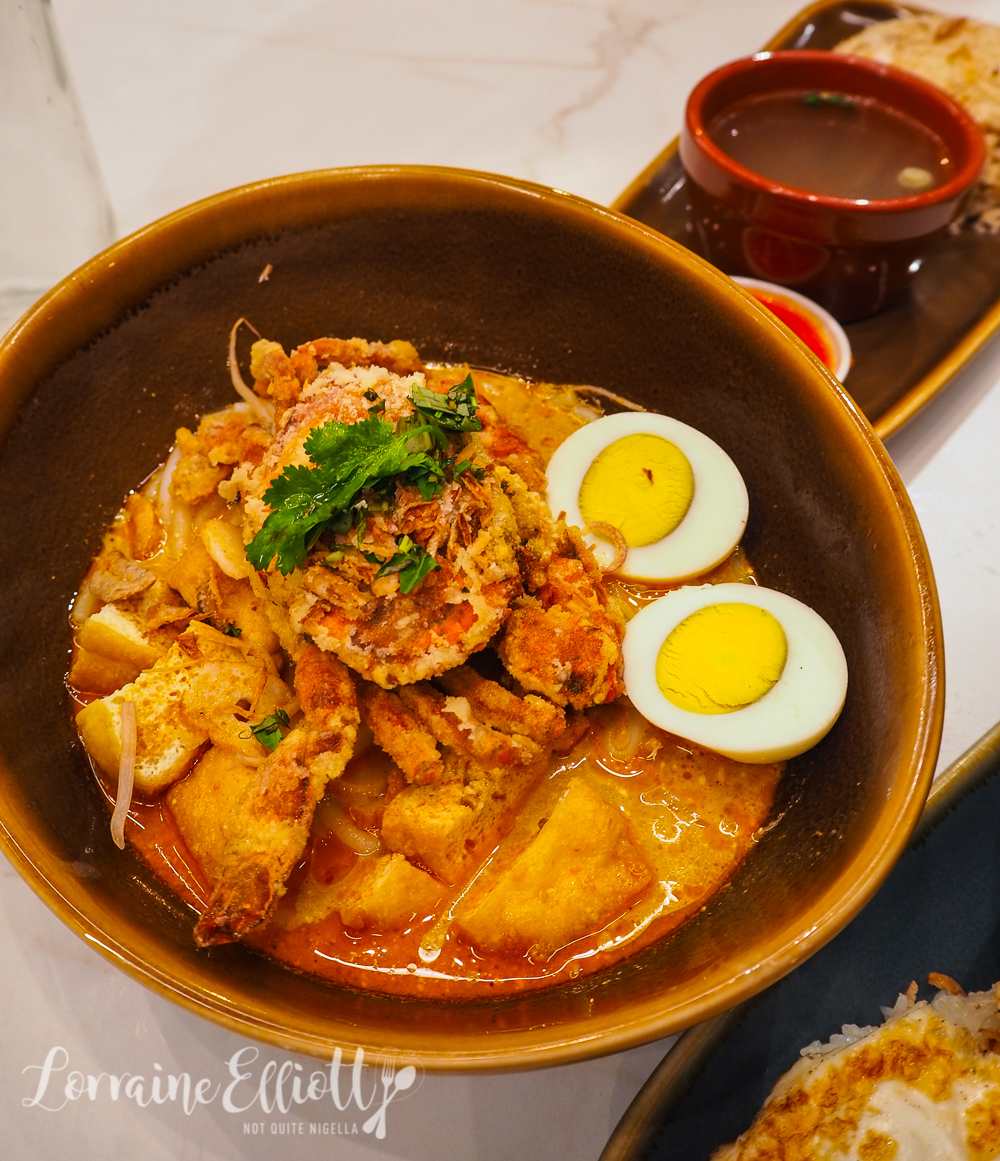 This was Ivy's choice as she loves soft shell crab. Honestly I wasn't overly in love with this dish as I prefer hokkien noodles in laksa and these white noodles were very, very soft as they had soaked up the laksa soup (hokkien noodles tend to stay a bit more robust in the short time you have eating a laksa as do vermicelli). 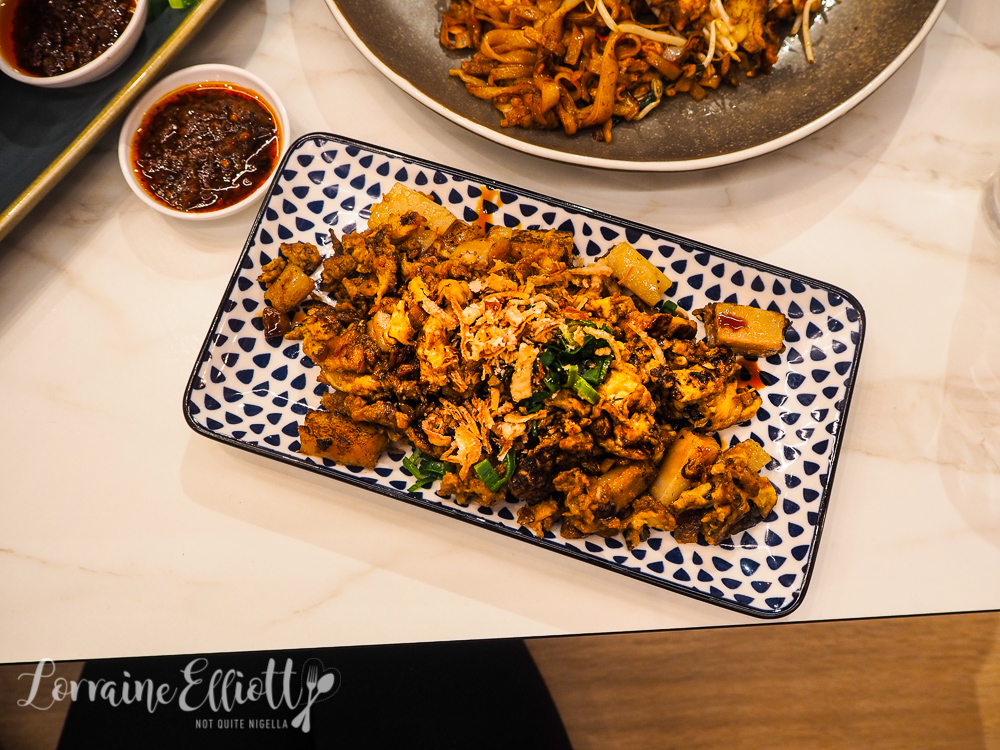 One of the new items on the menu is the carrot cake and you can get either a black or white version. We ask the staff what the difference is and they're not quite sure. As best I can figure, the black carrot cake has kecap manis on it while the white one looks to not have it and so we go with the black version. "Where's the carrot?" asks Ivy and it's a fair point because not only did I order something that looks nothing like their mental picture of a carrot cake but there isn't any carrot at all. Singaporean carrot cake is a savoury mixture of daikon (called white carrot), rice flour and eggs. I like this dipped in the chilli sambal provided and I think this is my favourite dish. 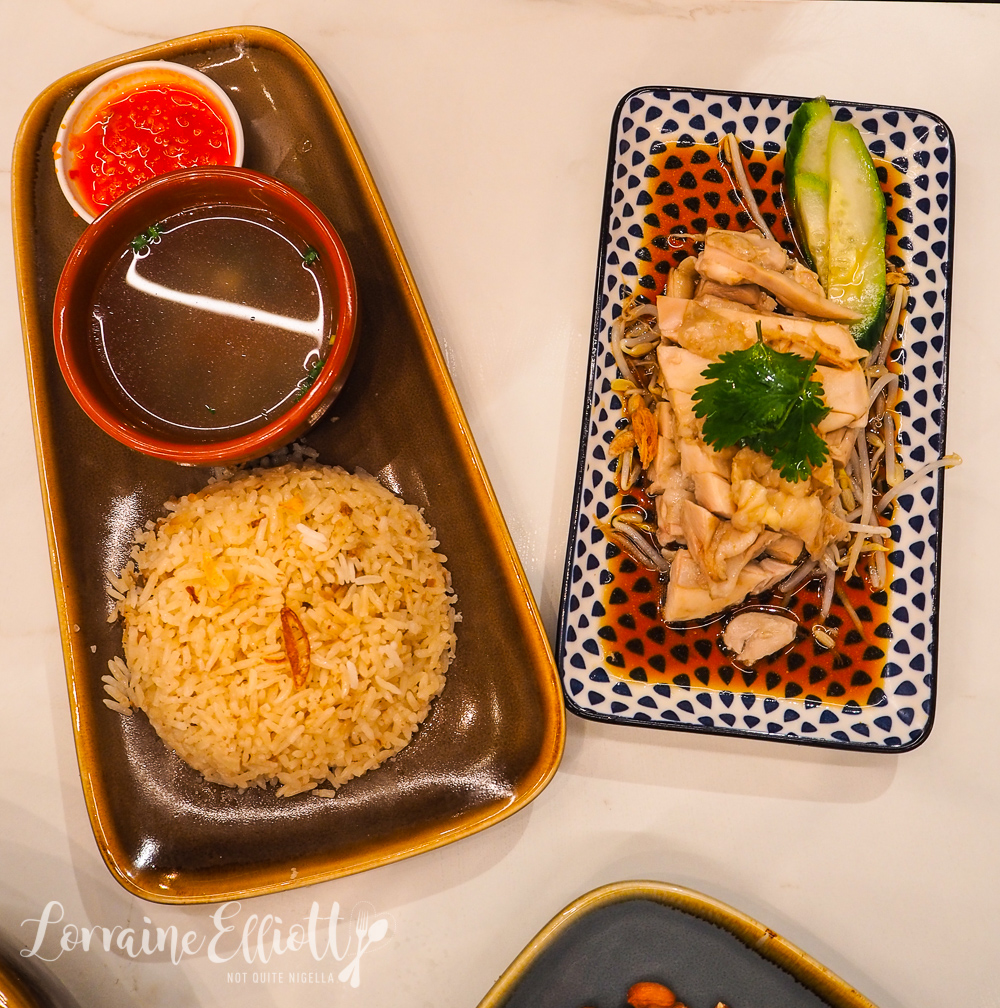 The chicken rice is quite nice and the chicken is soft although I do like it with much more of a ginger and garlic sauce punch to it. This has a bowl of chicken broth and a nice chicken flavoured rice but the punchy ginger and spring onion flavours that contrast well with the steamed chicken are missing from this. 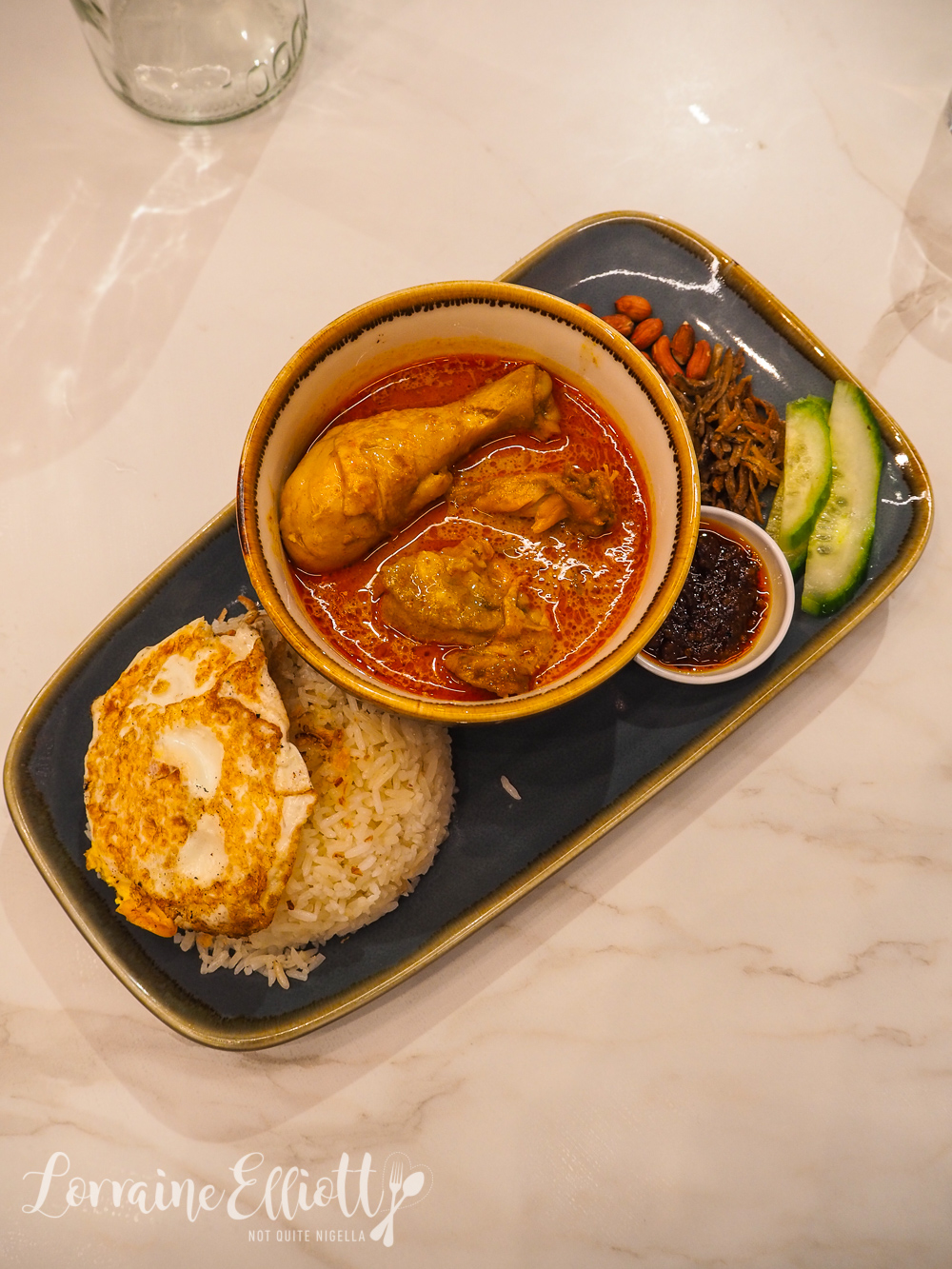 The nasi lemak has a bowl with three bone in pieces of curry chicken that taste pretty much exactly like my mother's curry chicken. It's a comforting home style dish with rice, fried anchovies, peanuts and chilli sauce and the chicken is soft and goes well with a side of roti to dip into the sauce. 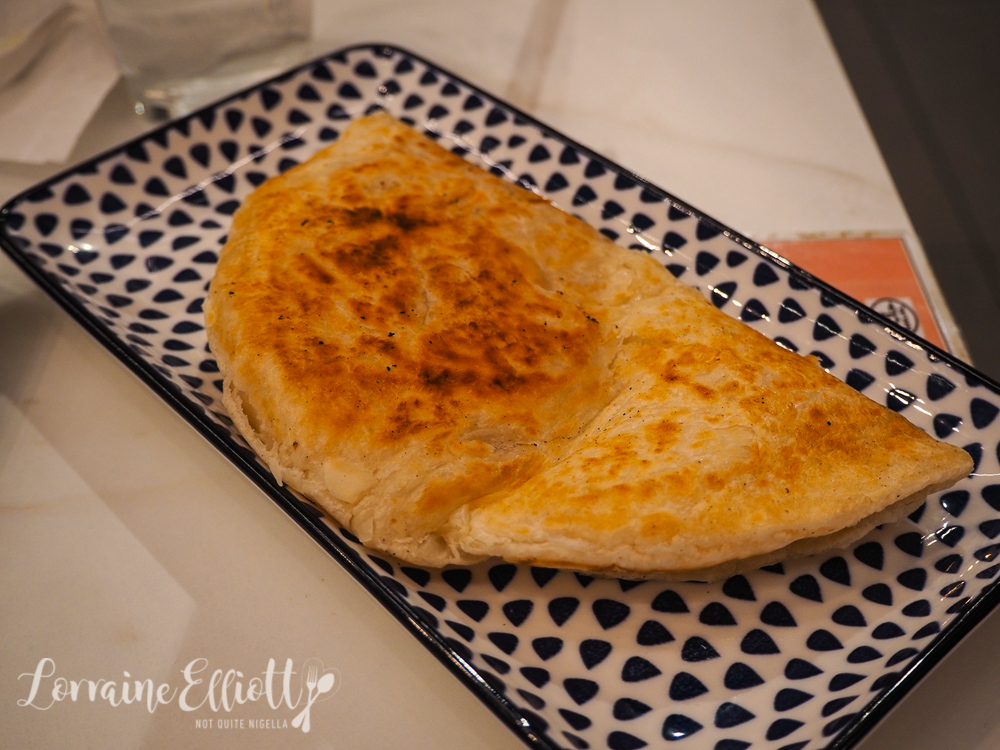 Originally I had ordered the roti as an upgrade to the laksa and I realised after checking the bill that they had forgotten to bring it so I ask about it and it comes out a few minutes later. It's slightly layered and thin (I prefer more layered) and we dip it in the nasi lemak curry chicken sauce. 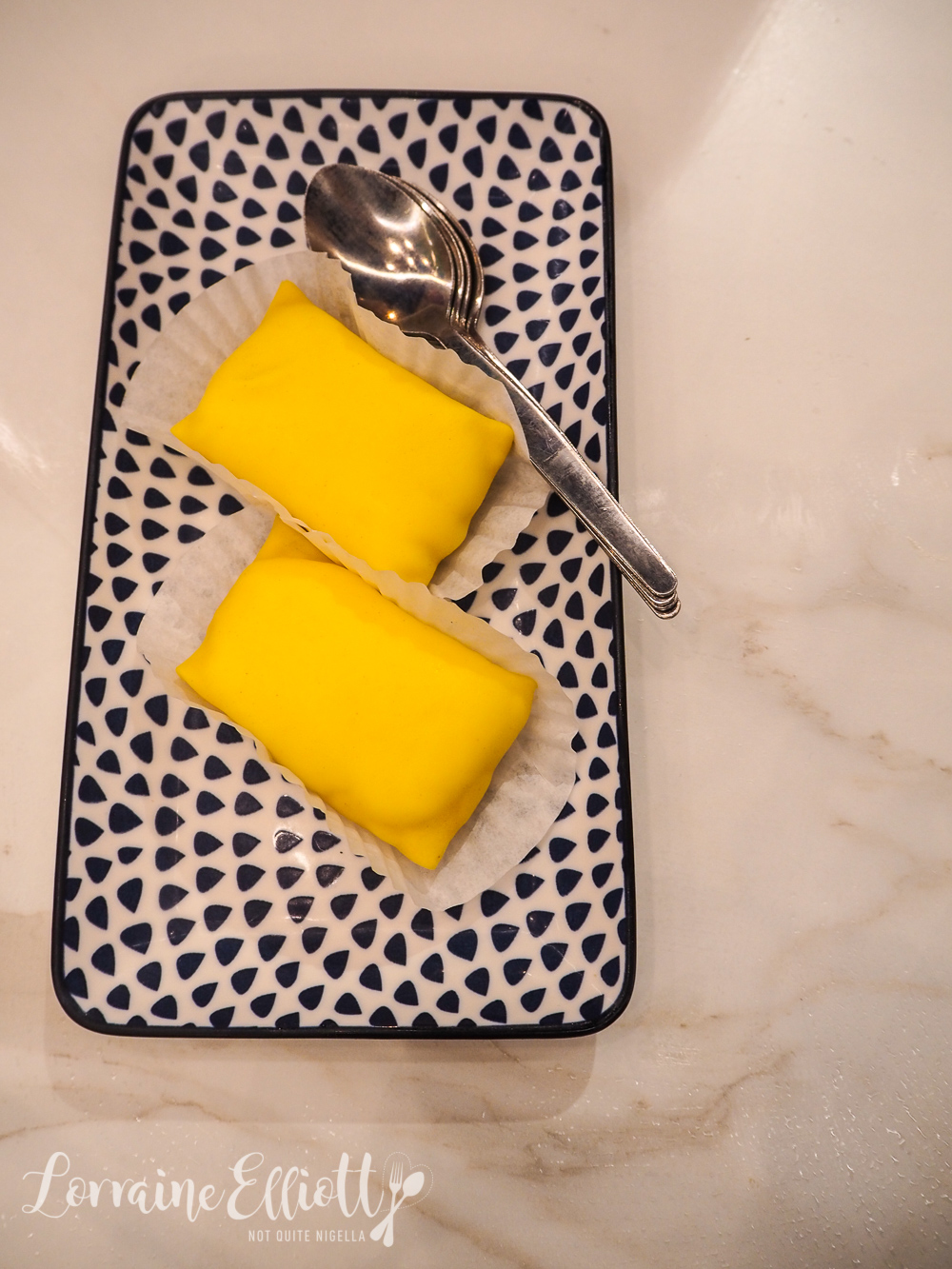 Originally they had brought the durian pancake out with the rest of the food but we asked them to put it in the fridge as it has cream in it and we wanted it for dessert. This is like a durian version of mango pancakes or crepes with two to a serve. Inside is fresh cream and durian. Mr NQN has never tried fresh durian before only durian flavoured things while Ivy has never tried it before and Ryan has eaten it before. Admittedly I'm not a huge fan because nothing can erase the smell for me, not even the taste which is inextricably linked to the smell. 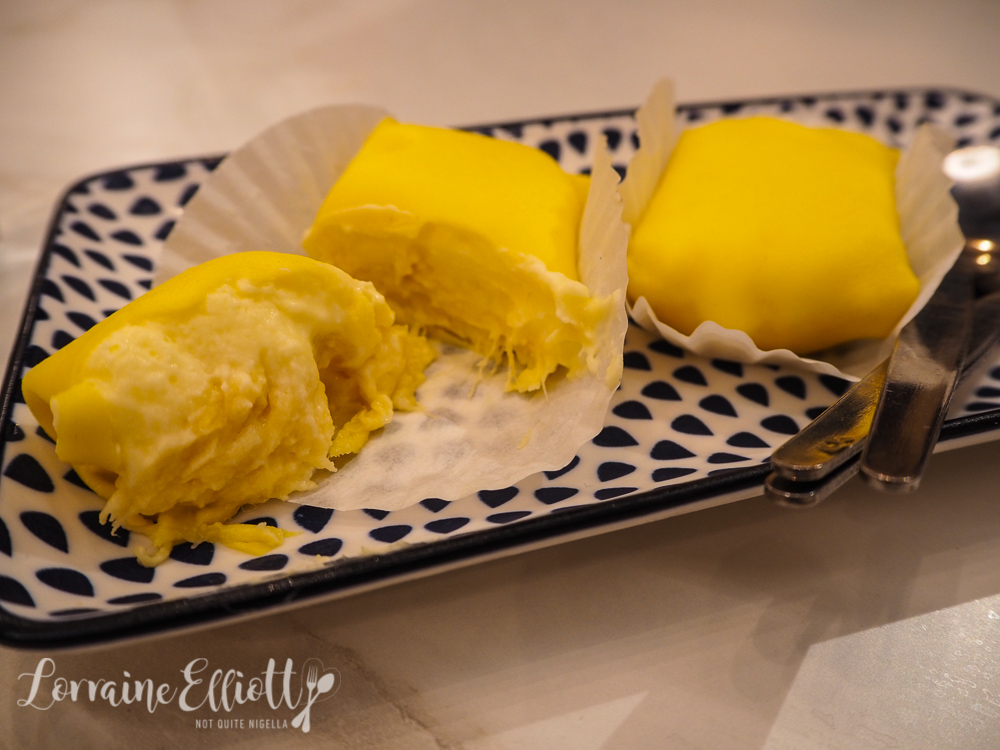 Ivy says, "I like oysters, Brussels sprouts, okra and fried crickets so I'm not precious...the smell was what did it for me. That was not to be underestimated. It has to be an acquired taste? How does one become immune to the smell? Aren’t we genetically wired to avoid things like that? The way the senses work? DANGER DANGER, DO NOT EAT."

So tell me Dear Reader, how do you feel about durian? Have you ever tried Asian soy milk and if so, what do you think of it?