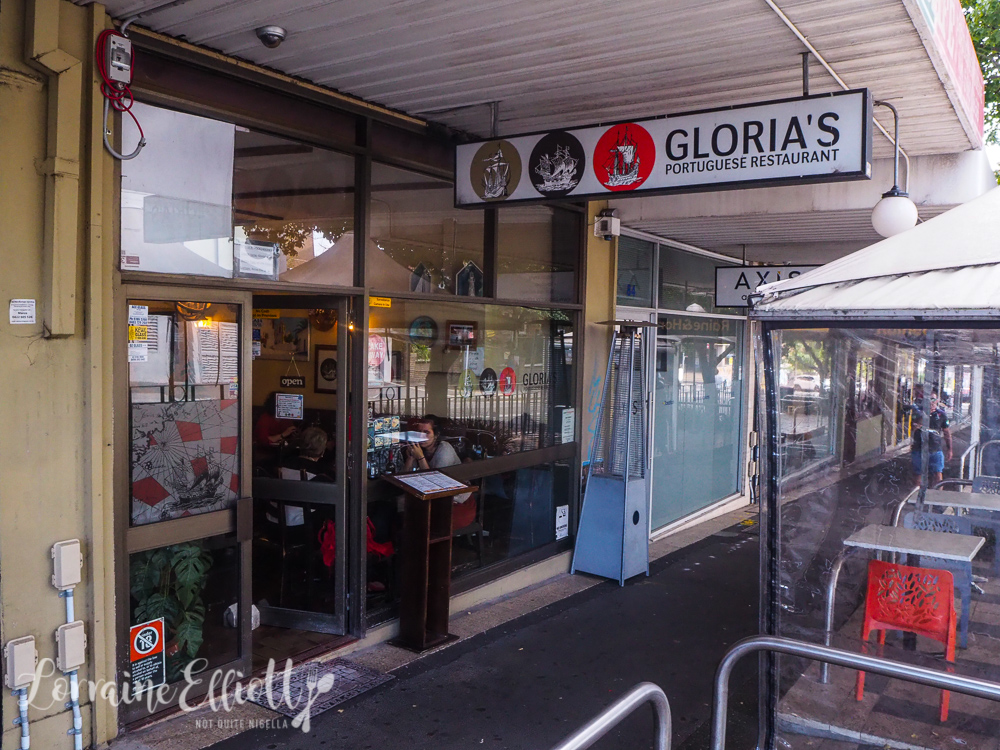 Gloria's is a Portuguese restaurant on Audley Street in Petersham. If you're craving Alentejo style pork, stuffed squid or Porto's famous Francesinha sandwich they've got it all! 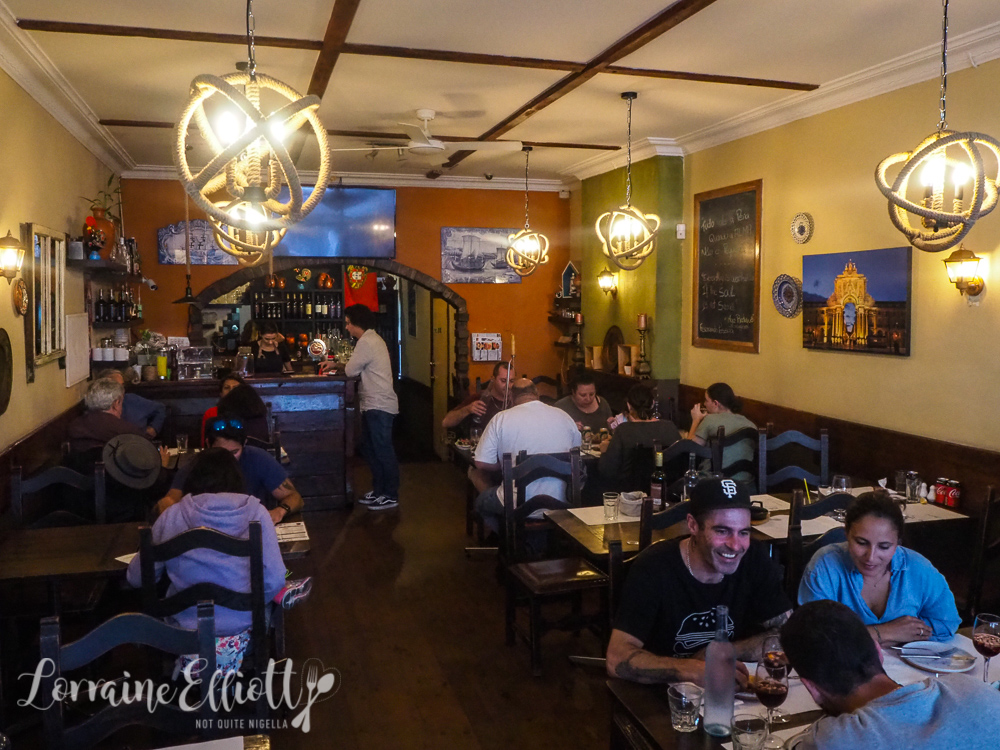 Two days after landing back in Sydney we had a craving for Portuguese food (or really I did and Mr NQN was happy to come along). So we headed to Petersham or Little Portugal in Sydney with Ivy and Ryan to relive the memories of our recent holiday to Portugal. 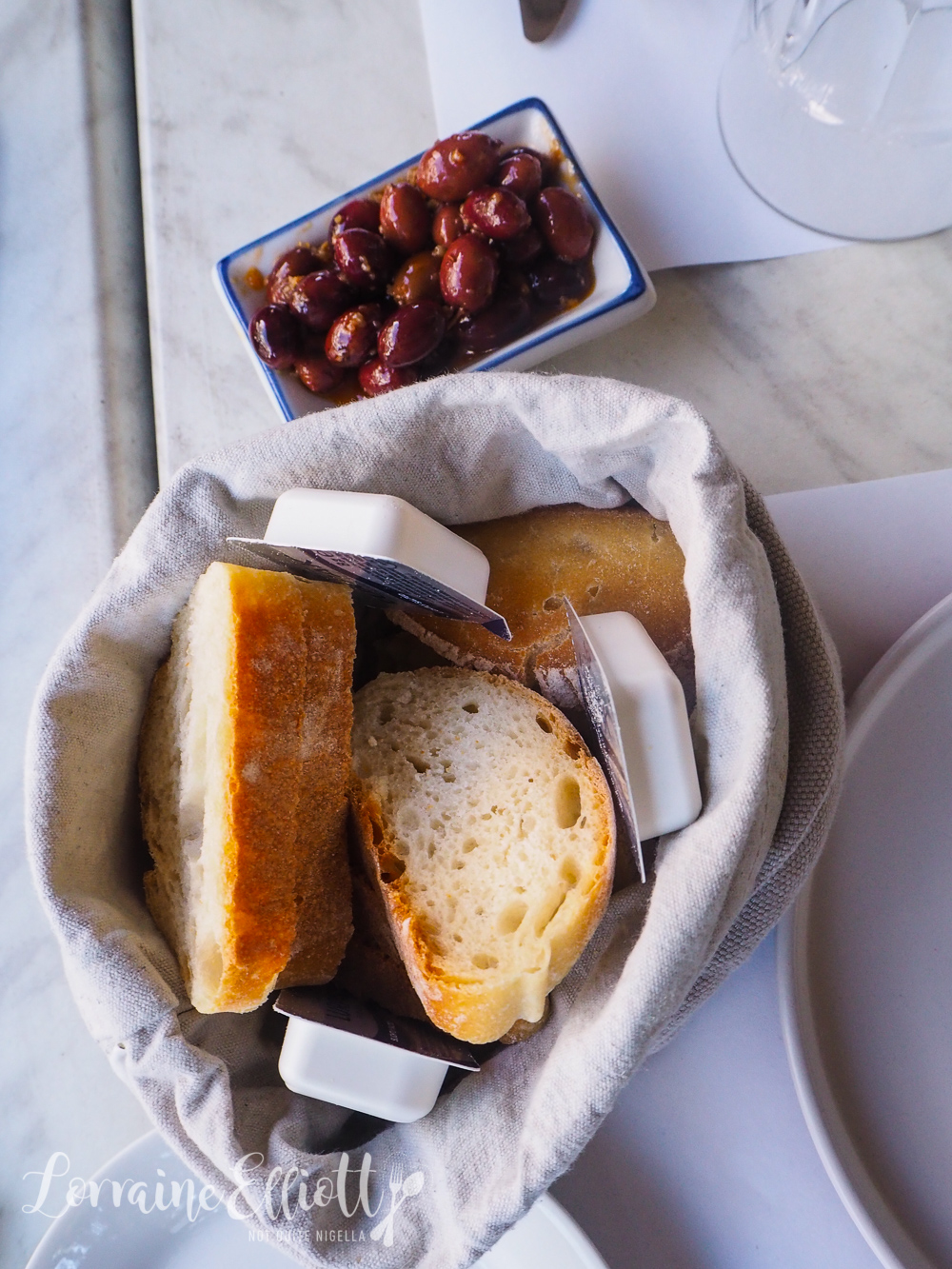 The menu at Gloria's is divided into mains and petiscos or tapas sized versions of the main dishes as well as some standalone petiscos. Service varies depending on the waitress. One is a bit uncertain and when Ivy orders a glass of Portuguese Chardonnay the waitress asks if she would like the red one. But other than that they're friendly and the other waitress gives us some recommendations. They bring bread, butter and olives to the table. 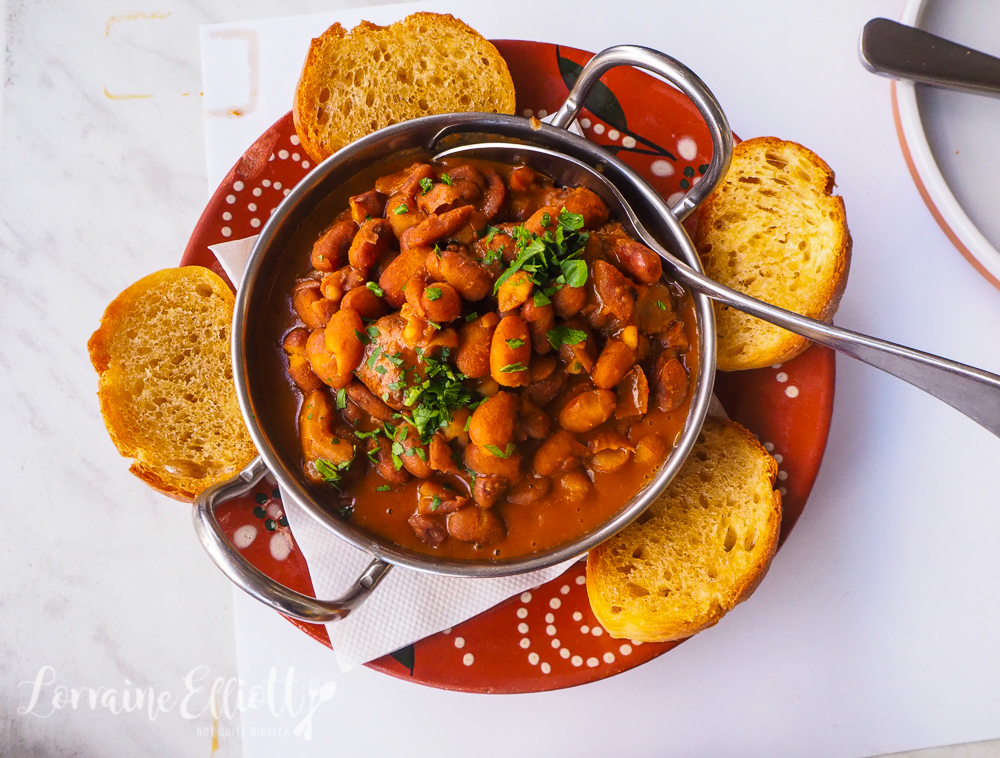 We start with a couple of tapas dishes which are quite sizeable. Ryan wanted to try the Feijoada which you can order in a spicy or non spicy version and we go for the spicy. It is a red bean stew with chorizo, soft beef and pork. This is one of my favourite dishes, not only because it was really spicy (and much spicier than anything we ate in Portugal) but it was also comforting and rich. It comes with four butter toasts to dip in. 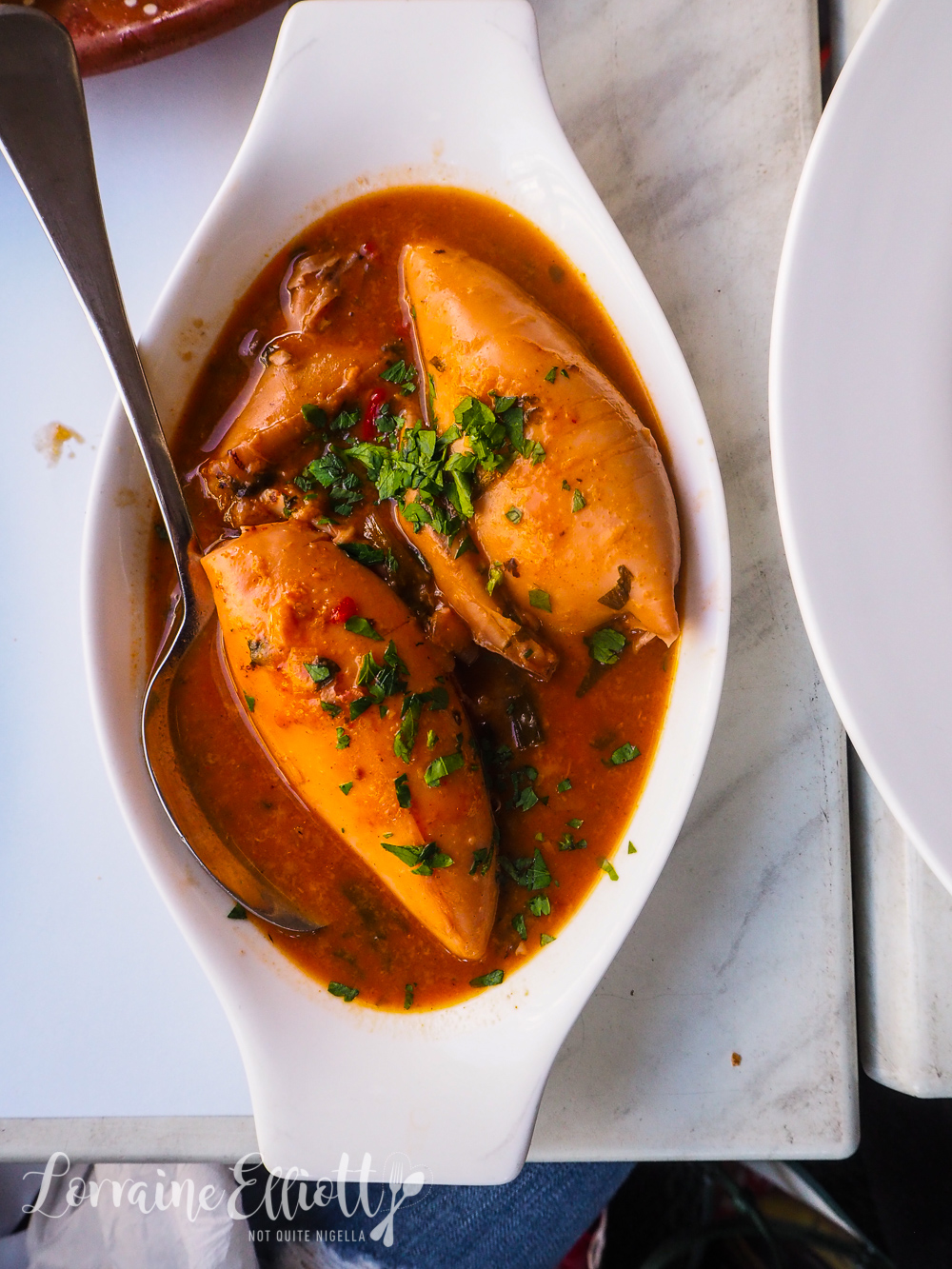 We never got to try the stuffed squid in Portugal so we decided to try it here. The calamari are tender on the outside and stuffed with bacon, bread and pine nuts and then cooked in a tomato based sauce. It's a good size for sharing and I do like the tenderness of the calamari. 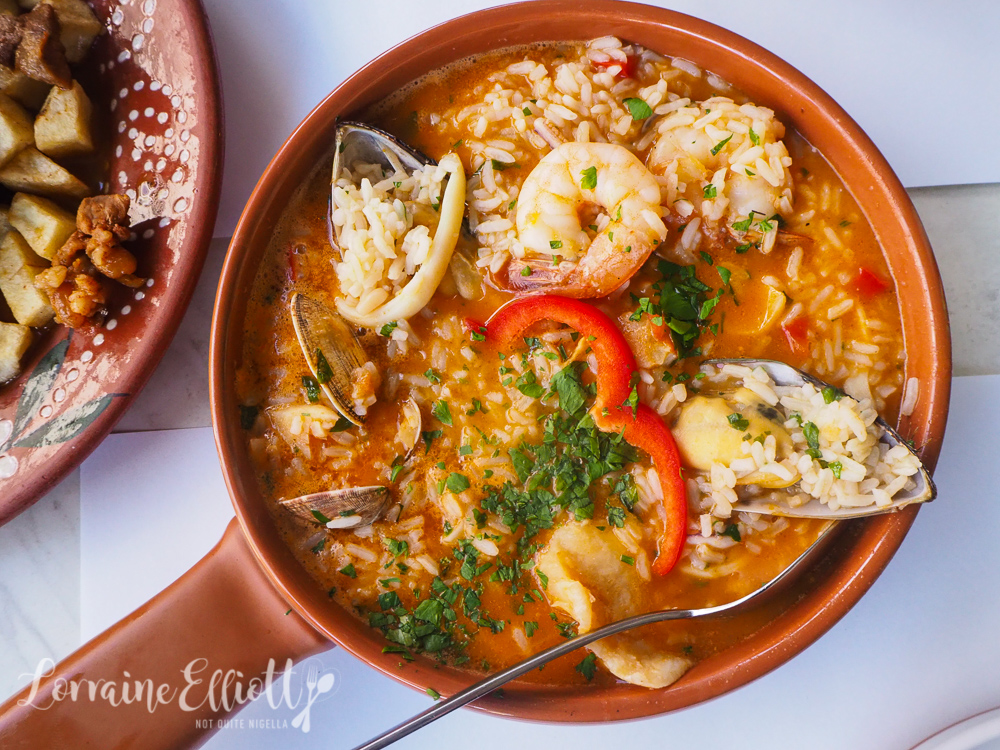 The seafood rice is a plentiful dish, really large enough to feed two as a main. There are prawns, fish, mussels and clams although this is a bit more muted in flavour than what we had eaten in Portugal. 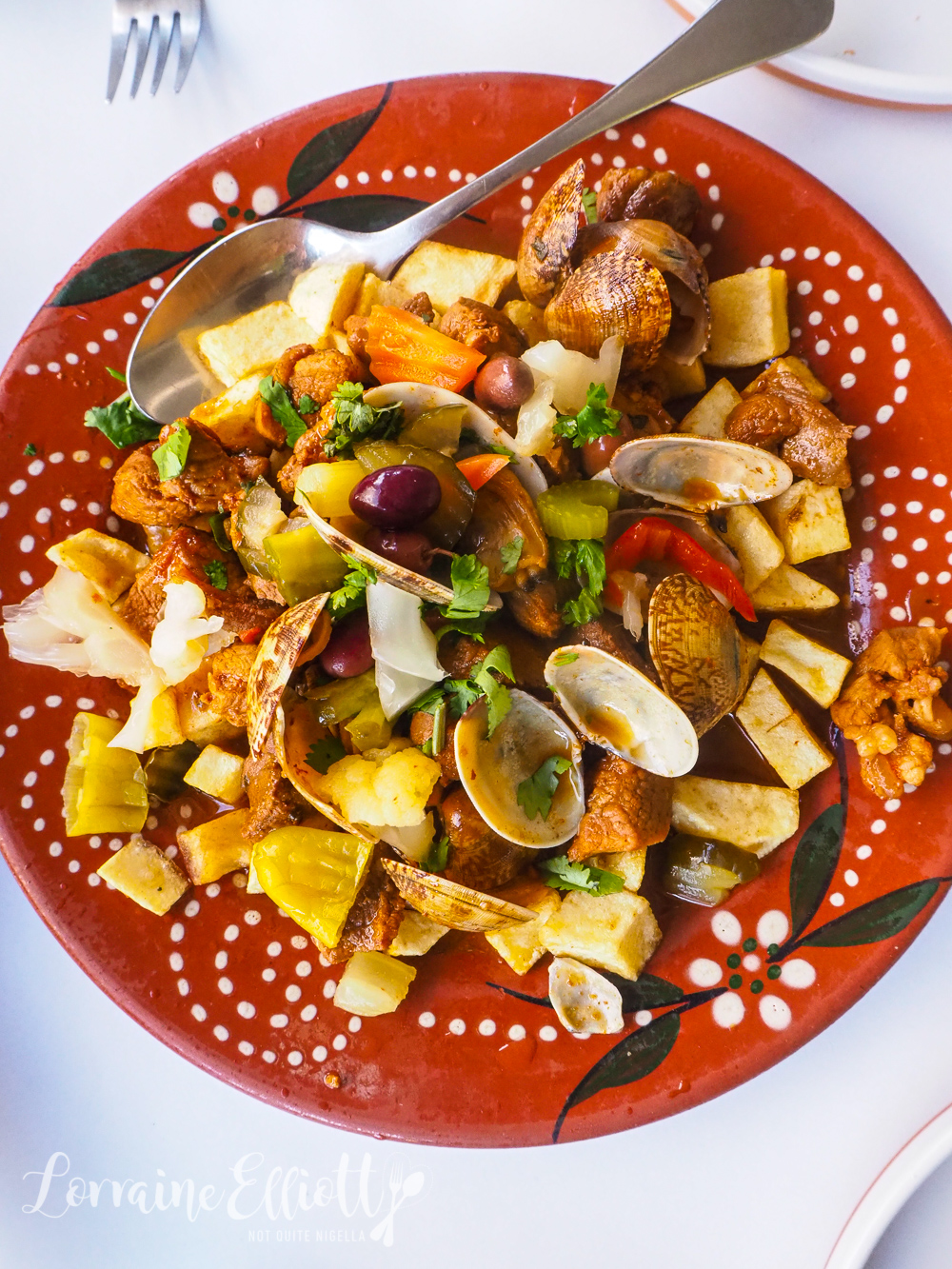 One of my favourite mains is the Porco à Alentejana, an area famous for its black pork. It is diced pork with clams, coriander, fried cubed potatoes and pickles. There is a robust flavour to this dish and I love the combination of clams and pork together. 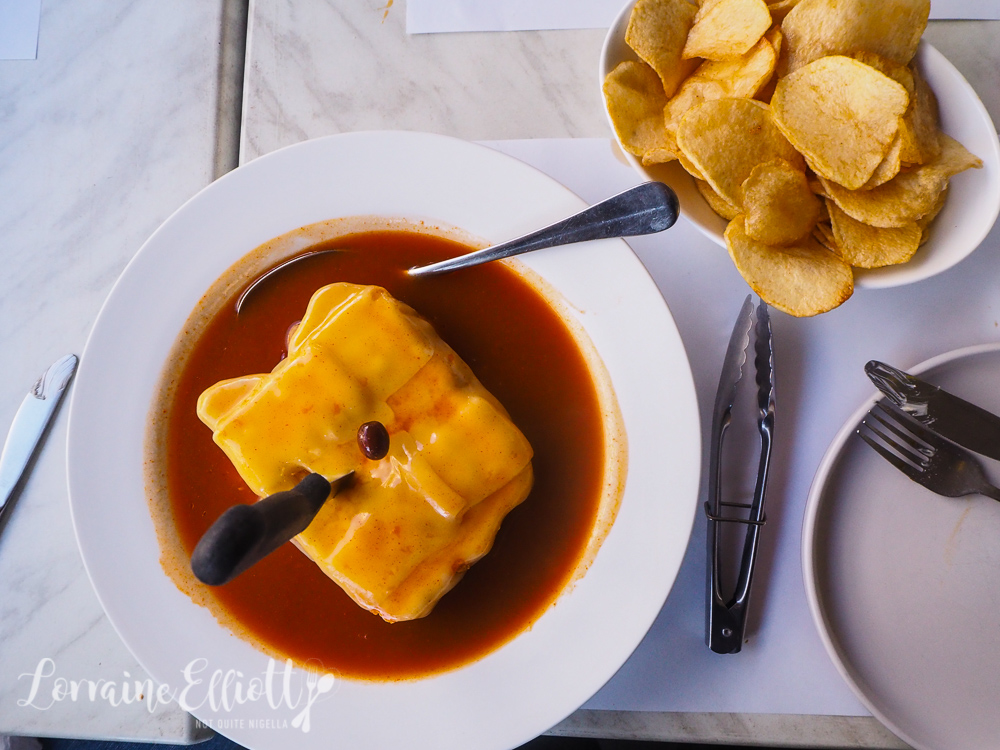 One of the most controversial things I ate in Porto was the Francesinha (I had to remove someone from my facebook page for being really rude about it). It's a sandwich unlike no other and is a pimped up cousin of a Croque Monsieur. It's a sandwich filled with steak, sausage, chouriço, egg, ham and covered with melted cheese and a tomato served with hand-cut fried round potato chips. 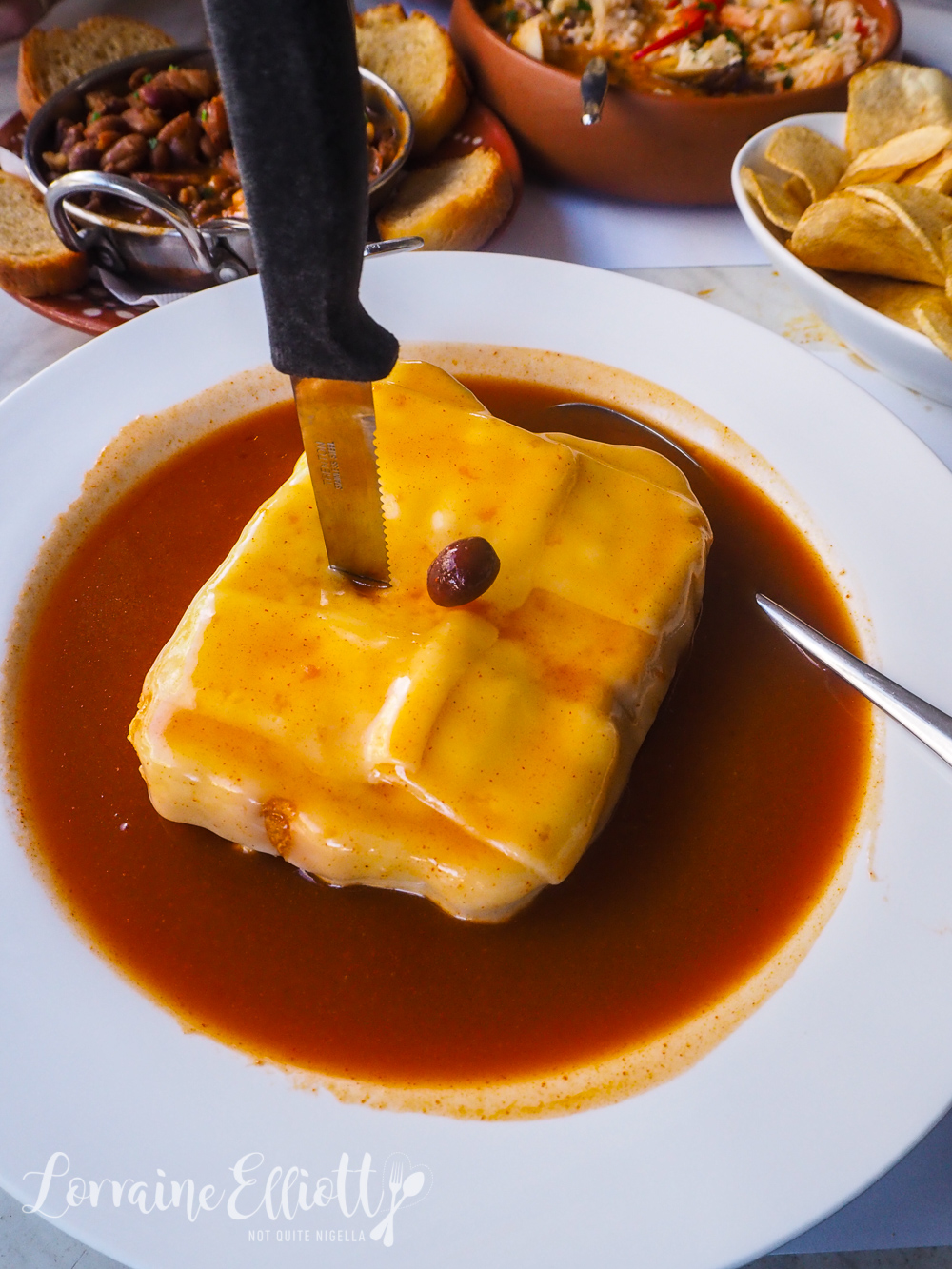 It's slightly different from the ones that we tried in Porto where they were served with an egg on top (and really no two Francesinha's are the same) and it is sitting in a lot of gravy. It's a nice version although practically speaking it is really difficult to eat with the amount of gravy it is sitting in as well as how liquid the gravy is. Ideally there would be less gravy in the bowl and a gravy jug on the side which is how they do it in Porto so that you can add it in without worrying about cutting into it and splashing yourself with gravy. The potatoes are fried, thin cut potatoes but they aren't crispy like chips. 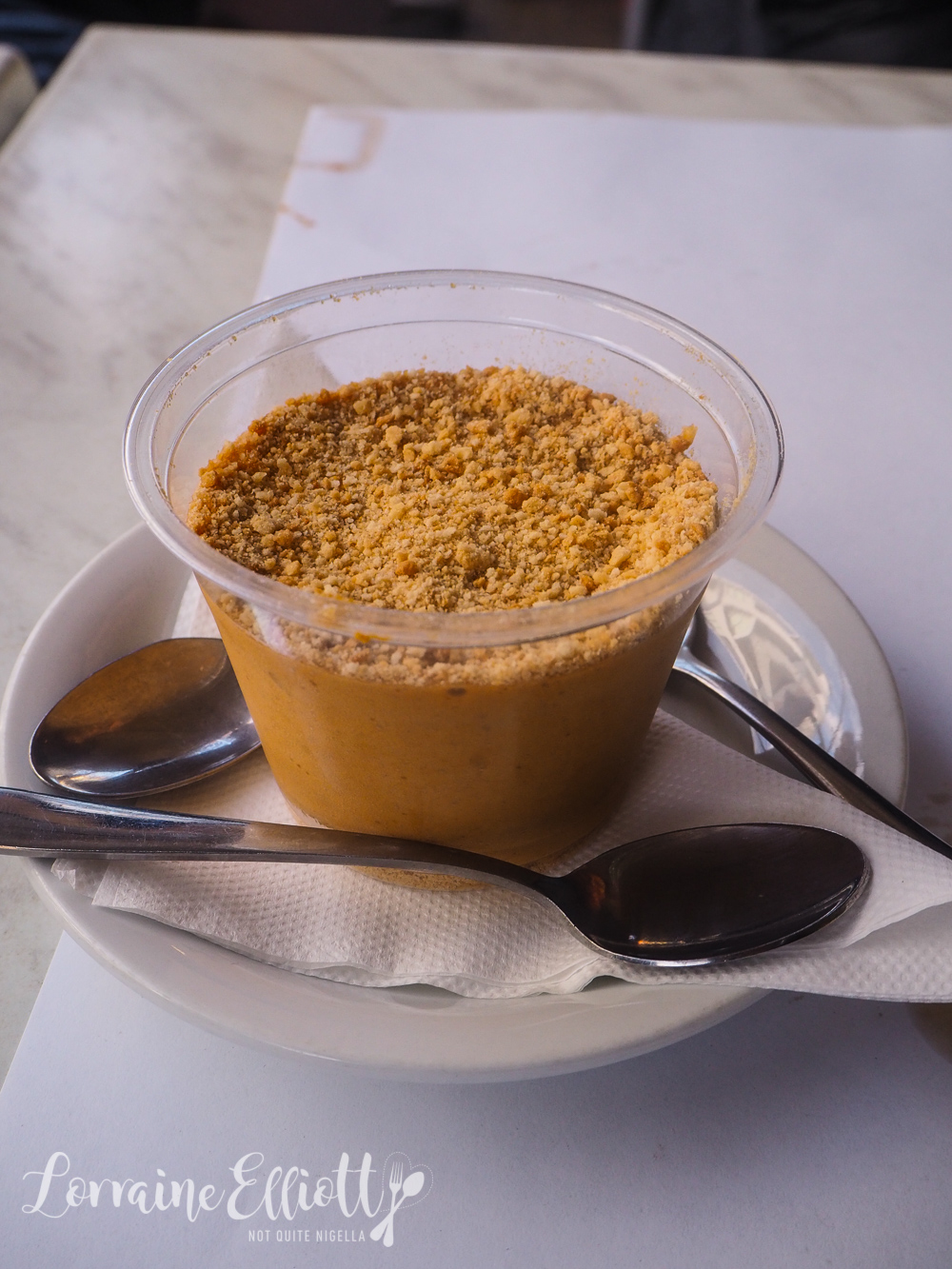 There's only room for one dessert here and Ivy hones in on the Baba de Camelo also dubbed "camel's slobber". It is a light mousse made of caramelised sweetened condensed milk with biscuit on top. I don't know what camel's slobber actually looks like but I'm sure it isn't as sweet!

So tell me Dear Reader, do you have a favourite Portuguese dish? Would you give the Francesinha a try?