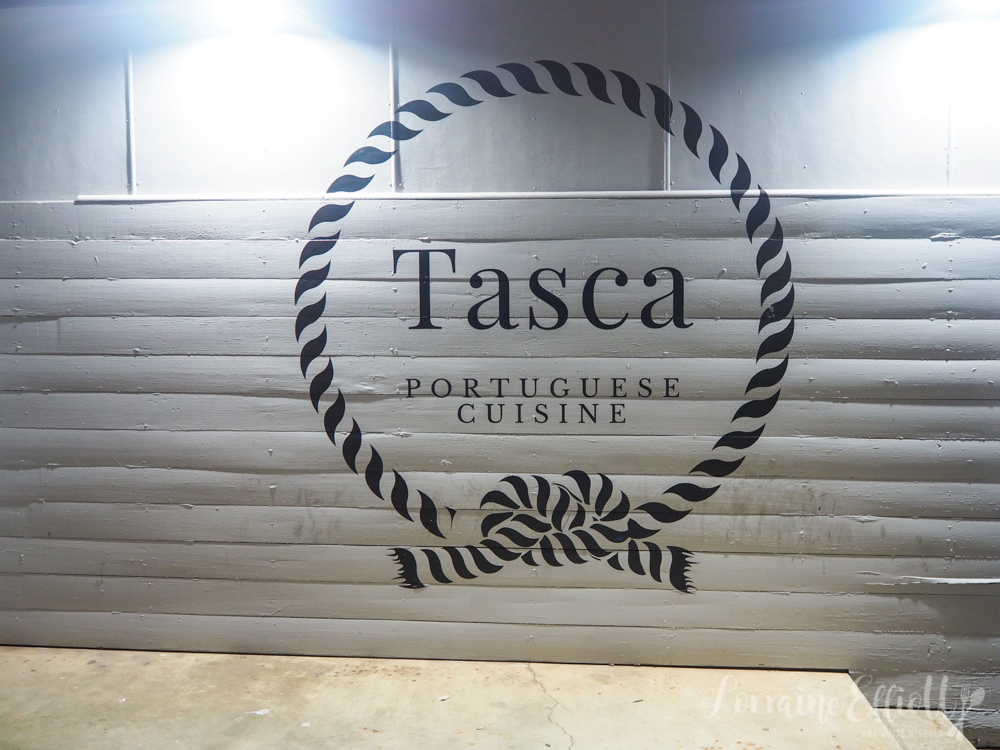 Tasca is the Portuguese restaurant in Portuguese Community Club, Marrickville. You'll find a menu of Portuguese classics including grilled seafood, clams, Alentejana pork as well as an eye catching Espedata de Carne Beef Skewer. All at a great price (if you can find it that is!) .

It was Queen Viv's birthday and she was excited as her son Michael was visiting from Brisbane. She asked me for some recommendations for her birthday dinner specifying something that would feel like a food adventure. I sent her a few options including the Portuguese club which she liked the sound of. 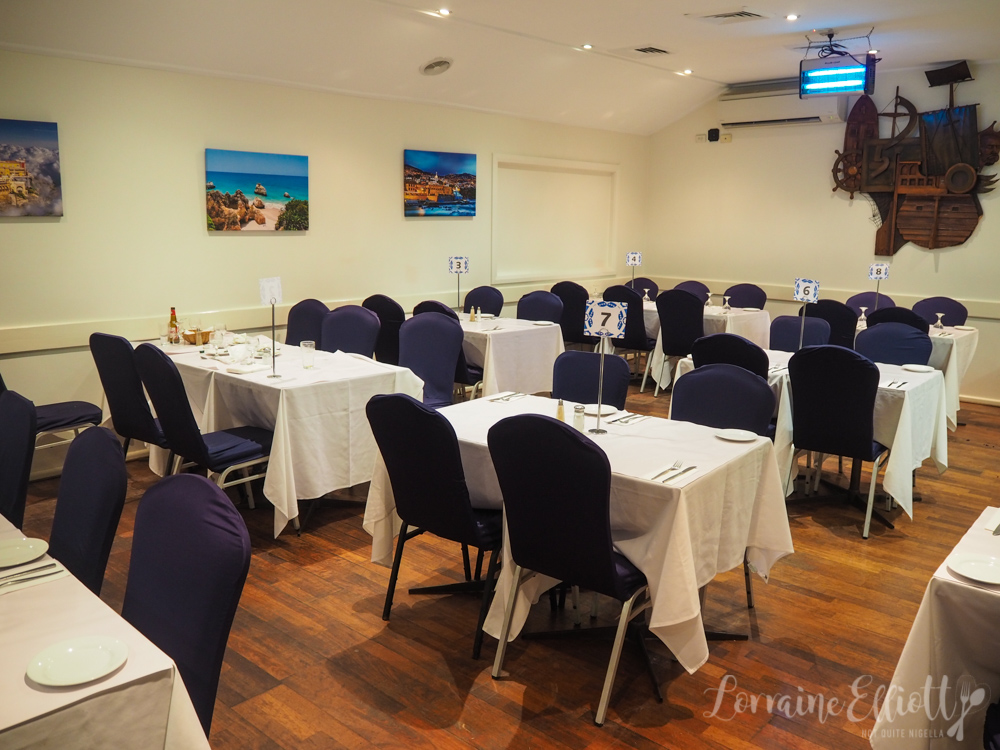 One week before she asked me, "Did I tell you what time I booked us in?" When I answered no she said, "Damn! I can’t remember what time I booked! I'll have to call them...". A few days later, unable to rouse them on the phone she suggested arriving at 7:15 to cover all bets.

As we leave for dinner Mr NQN asks, "Which Portuguese club is it?". "Errr the one in Marrickville," I say not realising that there are a few. 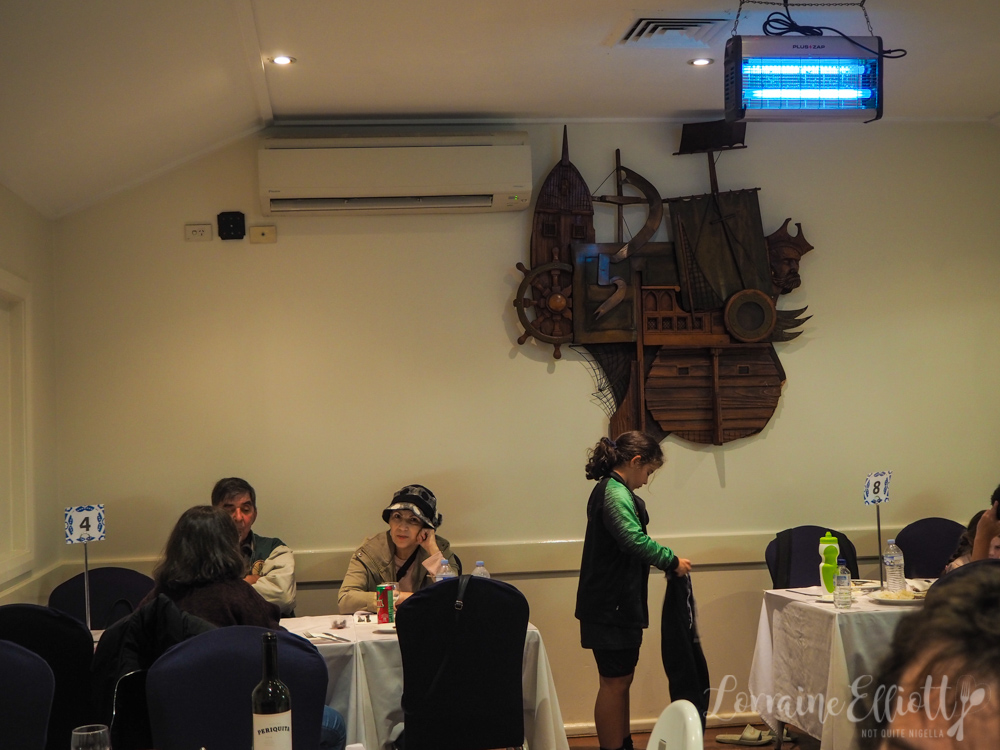 Google maps gives us a vague idea where to go but when we pull up on Marrickville Road, there's nothing to be found at the number. "Shall we get out and walk?" asks Mr NQN and seeing Queen Viv and Michael do the same all four of us start walking. "This looks like a crime scene setting from Law and Order SVU" I say watching steam rise and headlights shine on the bridge underpass creating shadows where the dubious lurks. It looks like there's nothing much here. We ask a man in high viz who is manning some construction and he points us in the right direction.

Spoiler: Tasca and the Portuguese Community Club aren't on Marrickville Road, they're down the road parallel to it so Mr NQN and Michael fetch the cars. You need to drive a bit of a distance past all the tennis courts and sports courts and at the end of the street there is Tasca and a large car park. Grateful to have found it we walk in past the list of rules and turn left and enter the restaurant where we are greeted by our lovely, friendly waiter. Miss America is already seated having gone through this exact thing already except on foot. The poor thing had found himself wandering the vast sporting paddocks by himself following his wits eventually finding it. I'm surprised he isn't halfway deep into a bottle of wine by the time that we arrive. 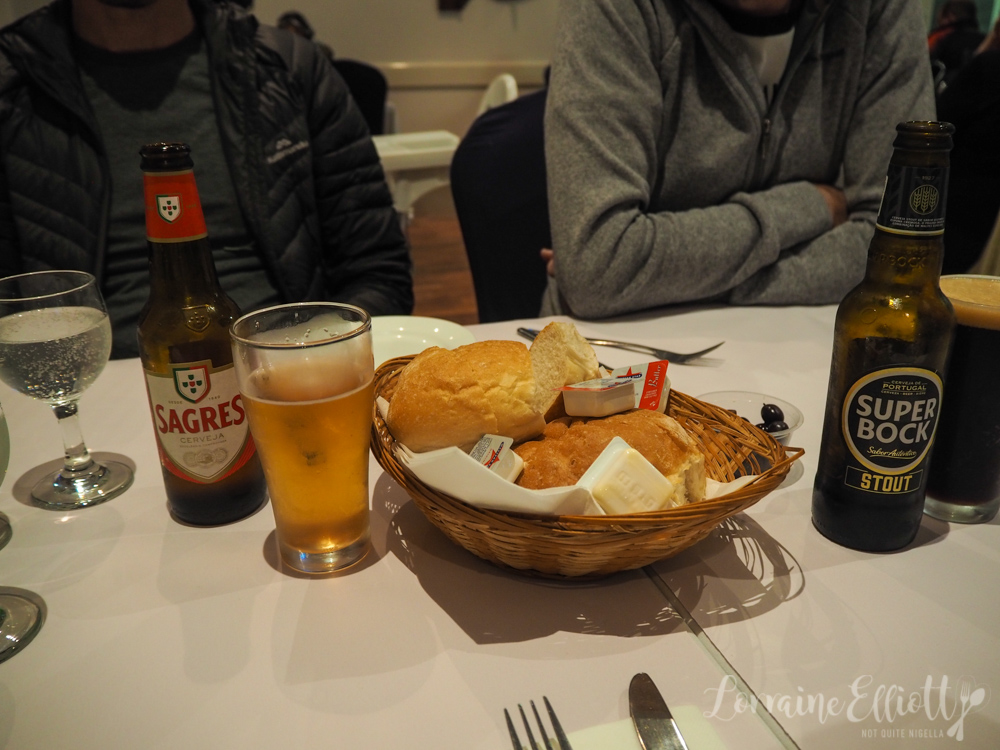 "I'm starving!" he announces so we get to ordering. I have a secret weapon: my food twin Monica is a regular here and she gives me a list of things to order on the menu. I locate them and we order quickly. She had warned us that the portions were ginormous and even our waiter suggests applying the brakes to our order and between the five of us we share 4 entrees and 2 mains leaving room for dessert. 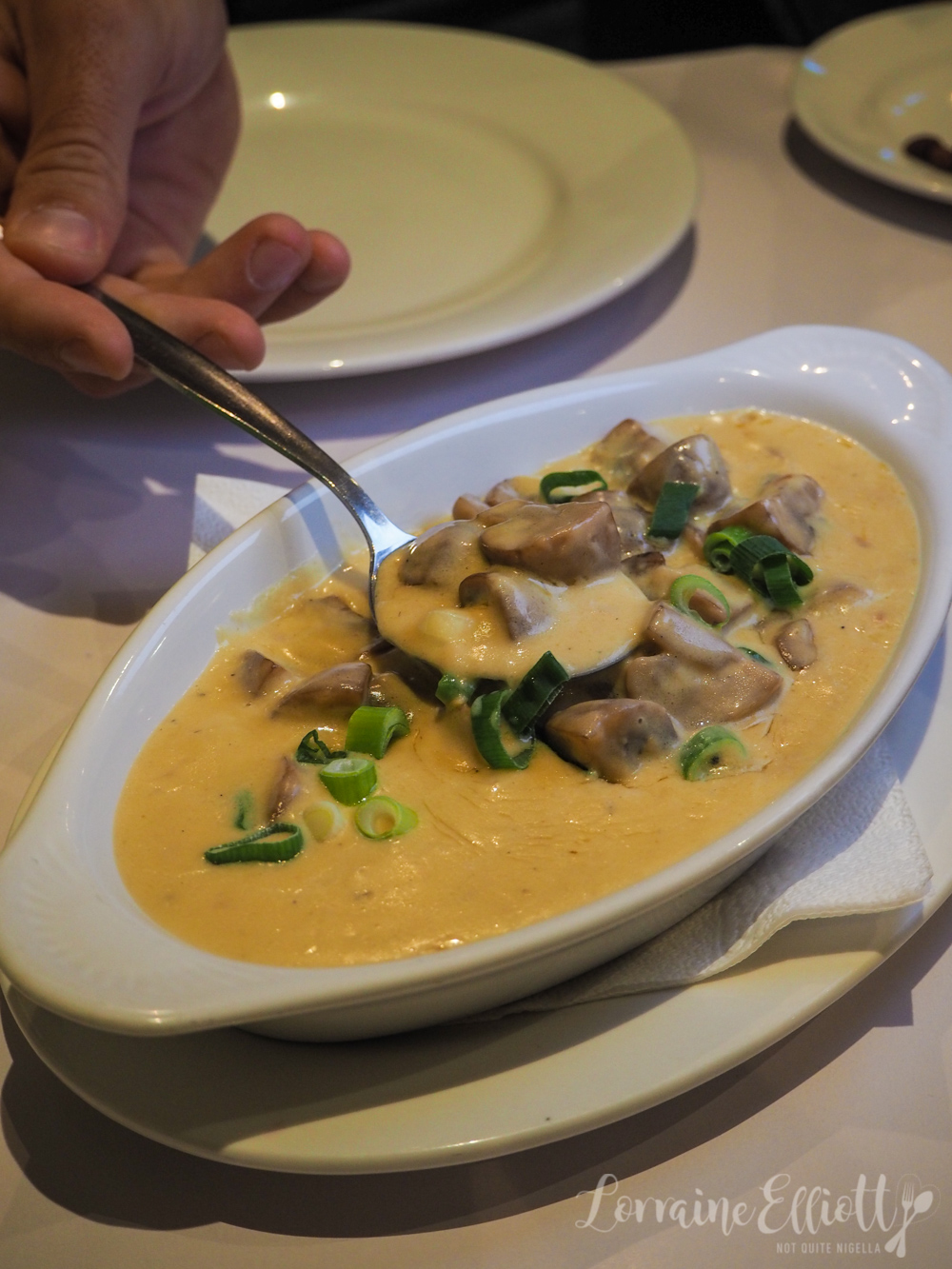 The food comes out quickly. First it's the mushrooms in a cream sauce. "I dream about those mushrooms," Monica had messaged . The garlic mushrooms are tasty and come in a thick creamy sauce that is perfect for dipping the bread in. They're nice although I'm curious that Monica dreams about them and make a mental note to ask her about them later. 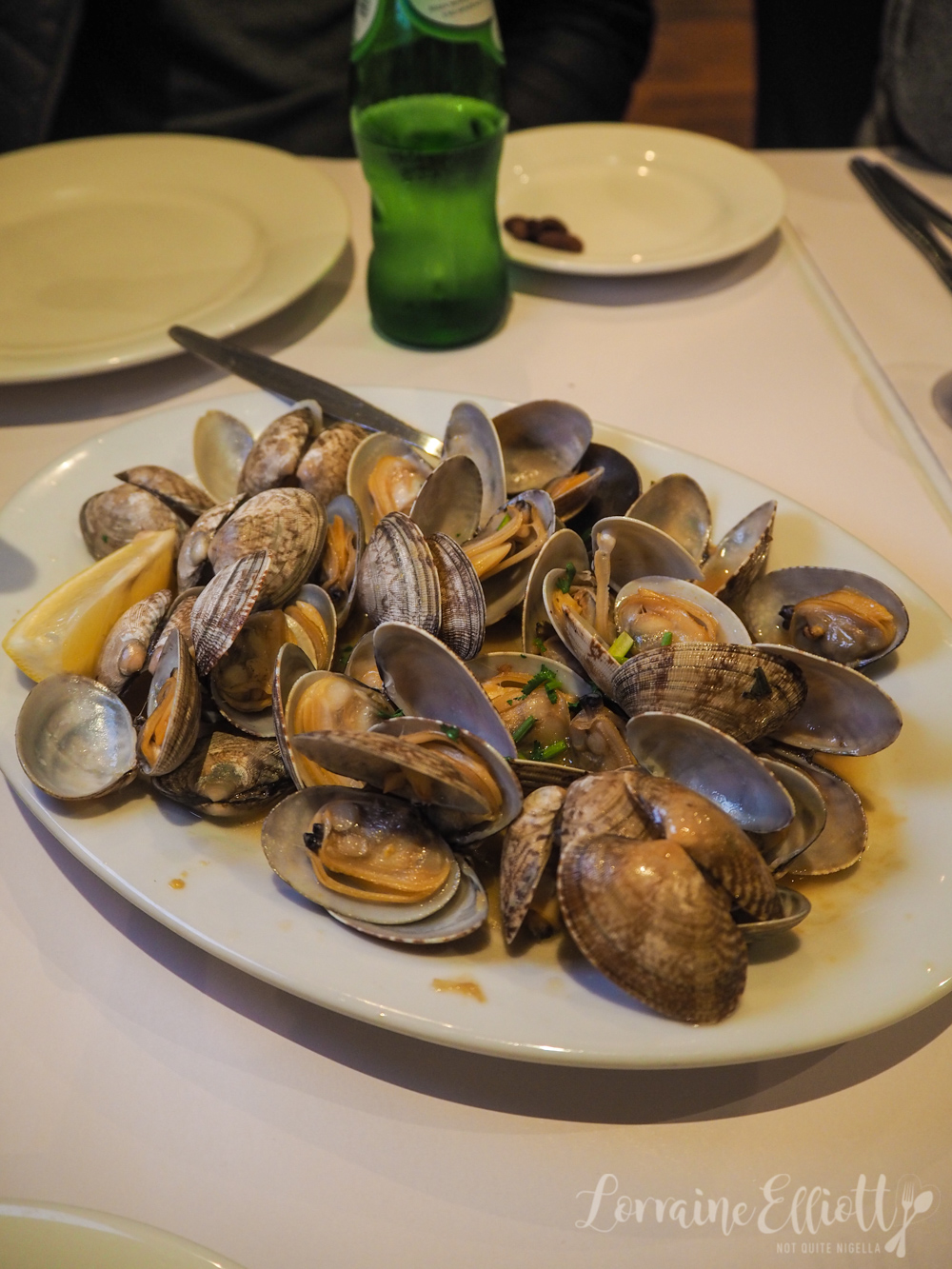 Then there are the clams with lemon, mustard and coriander. The smaller ones are a tad overcooked while the larger ones are perfect. 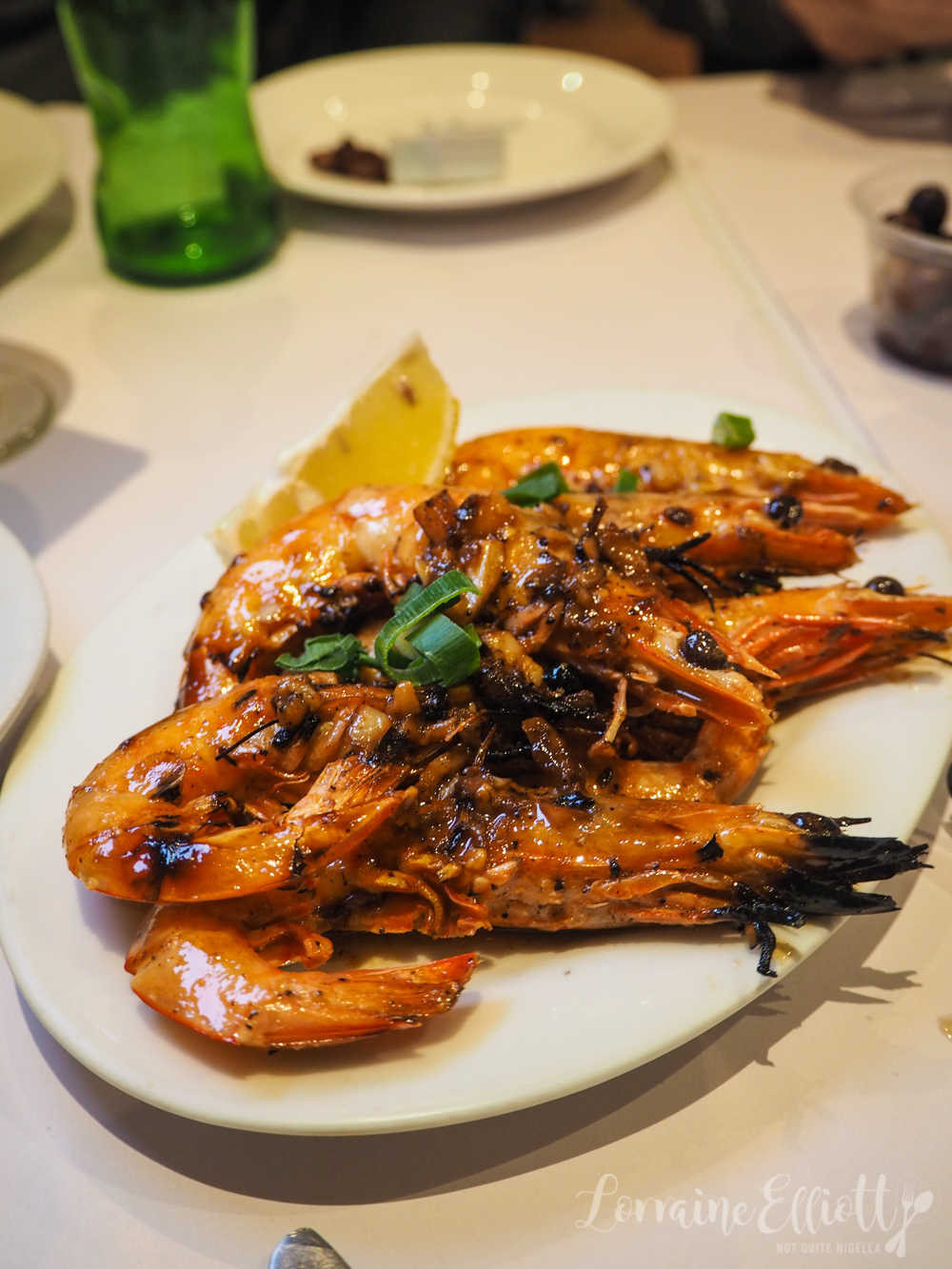 I adore the grilled king prawns with a sweet, garlicky flavour to them that just begs mopping up with the bread. They're meaty, served shell on and well cooked. 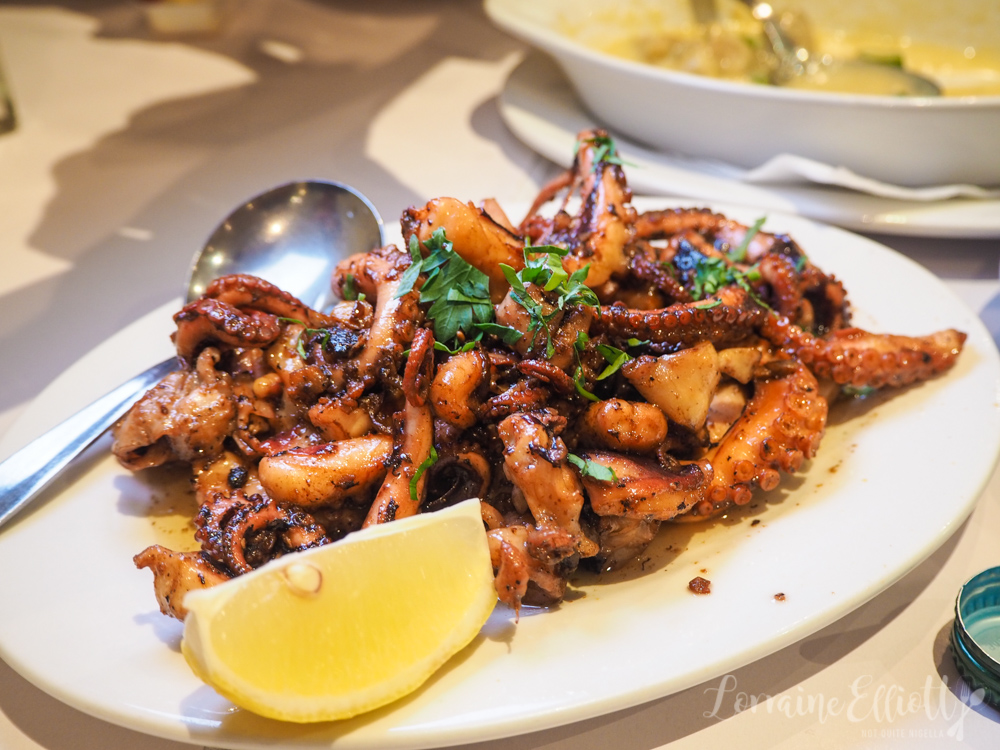 Queen Viv adores octopus and we order a serve of this. The grilled baby octopus is another favourite, tender with caramelisation from the grill. All it needs is a squeeze of lemon. 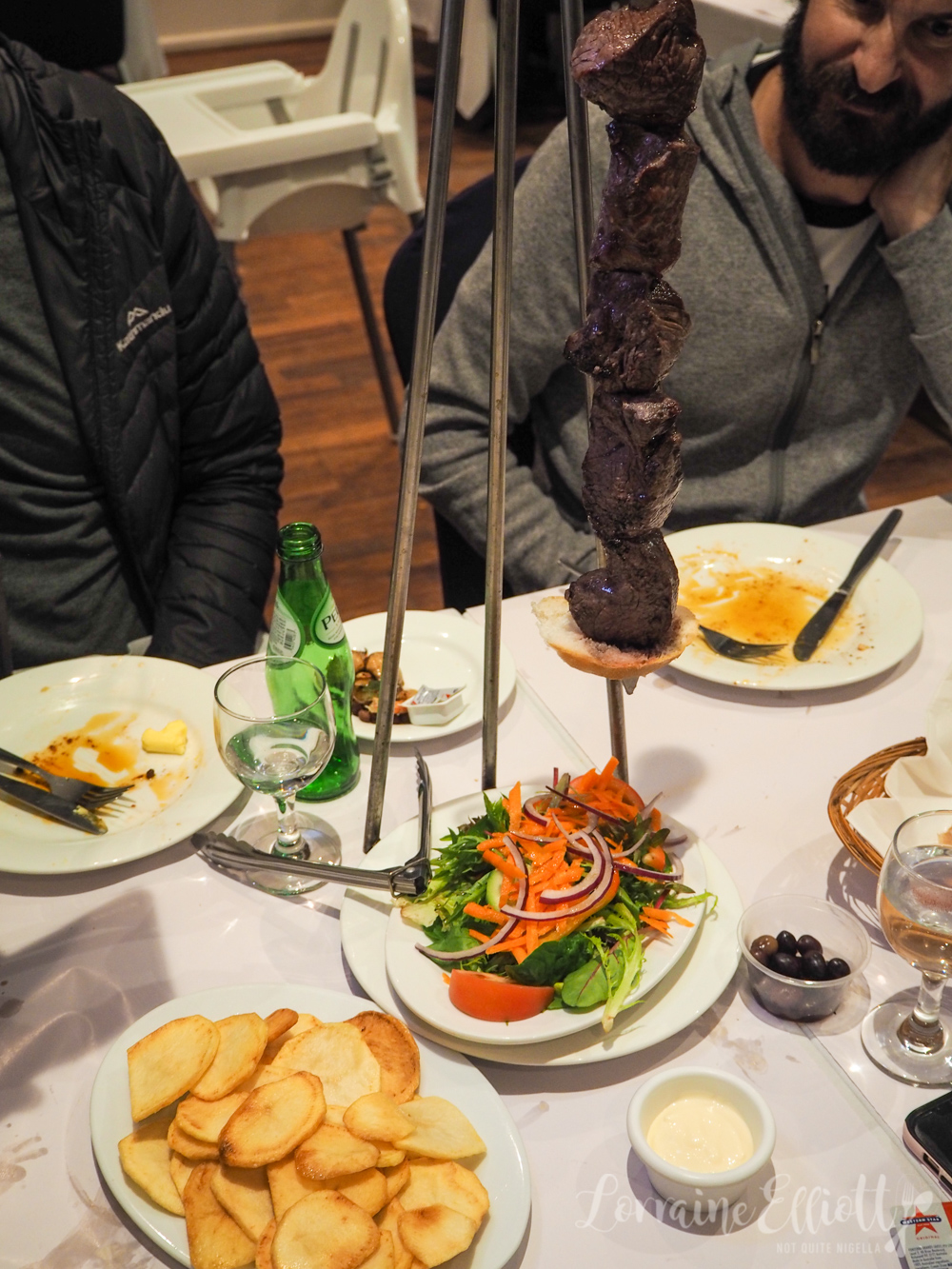 Then it's time for our mains. "You HAVE to ask for round chips with the beef skewer," said Monica. The Espedata usually comes with regular chips but when I ask for round chips it isn't a problem. The beef skewer comes out suspended on a metal stand. Michael does the honours of removing the meat from the metal skewer. It's a fun way to serve beef and it is very tender. As for the round chips, I'm very much smitten by these and I swear I ate half of these. As for the salad...well it's a nice gesture but only the hungry, tall menfolk Mr NQN and Michael finish it off. 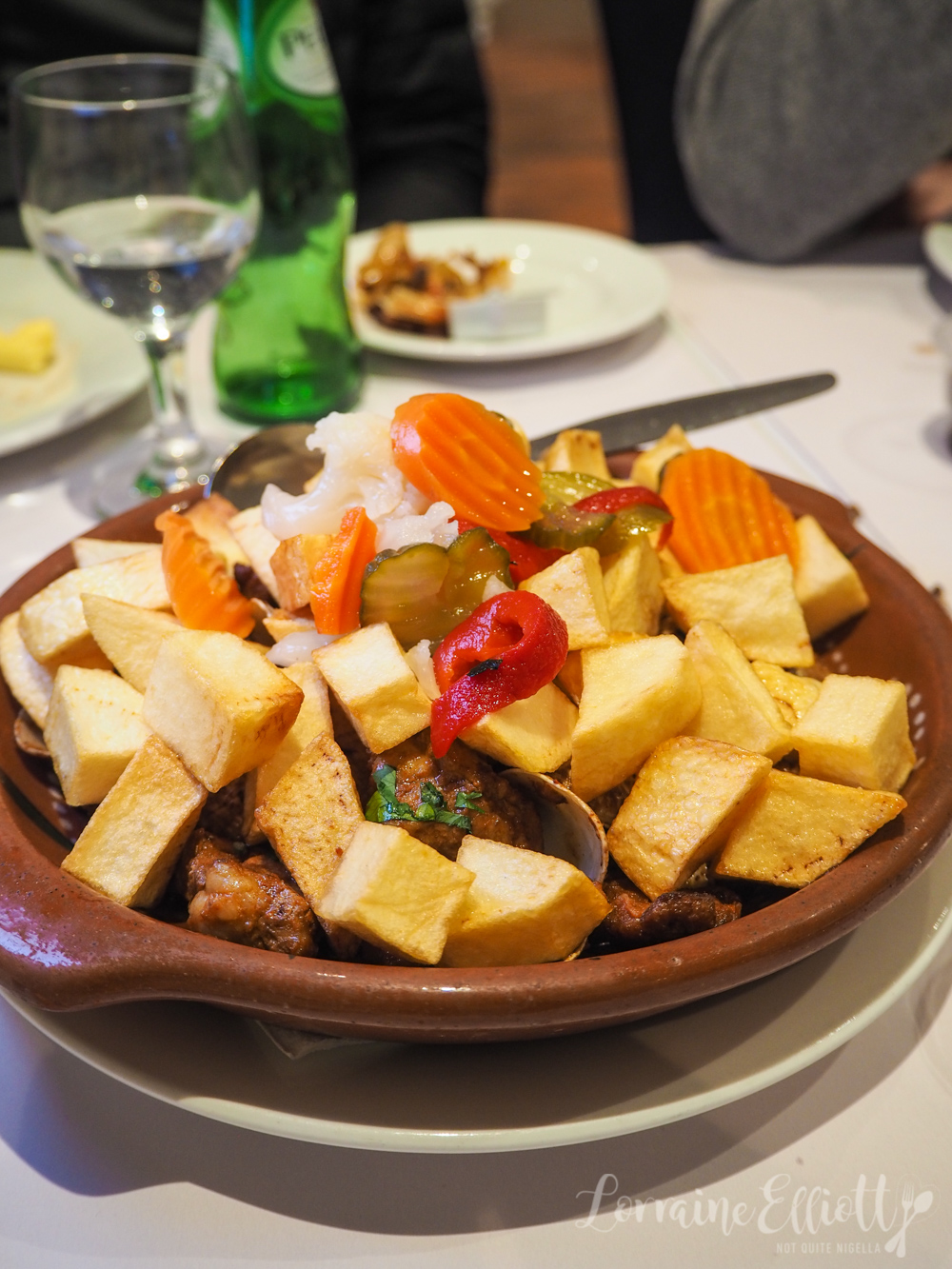 My favourite dish of the night is the Alentejana or marinated pork cubes. This reminds me so much of being in Portugal and some of the wonderful pork dishes we had there. The pork is tender, juicy and full of so much flavour from the marinade and it's served with clams, potato cubes (which they call square chips so we're trying both tonight) and pickles. You do have to eat it all together because the potato cubes aren't salted but the pickles and pork is so that it's perfectly balanced. I also love this with the round chips above too.

A text comes from Monica, "What did you think?" but I decide to answer her later once dessert has come out. Our waiter tells us there is chocolate mousse, flan and Portuguese custard tarts. I ask if there's Molotov available but they're out of it. 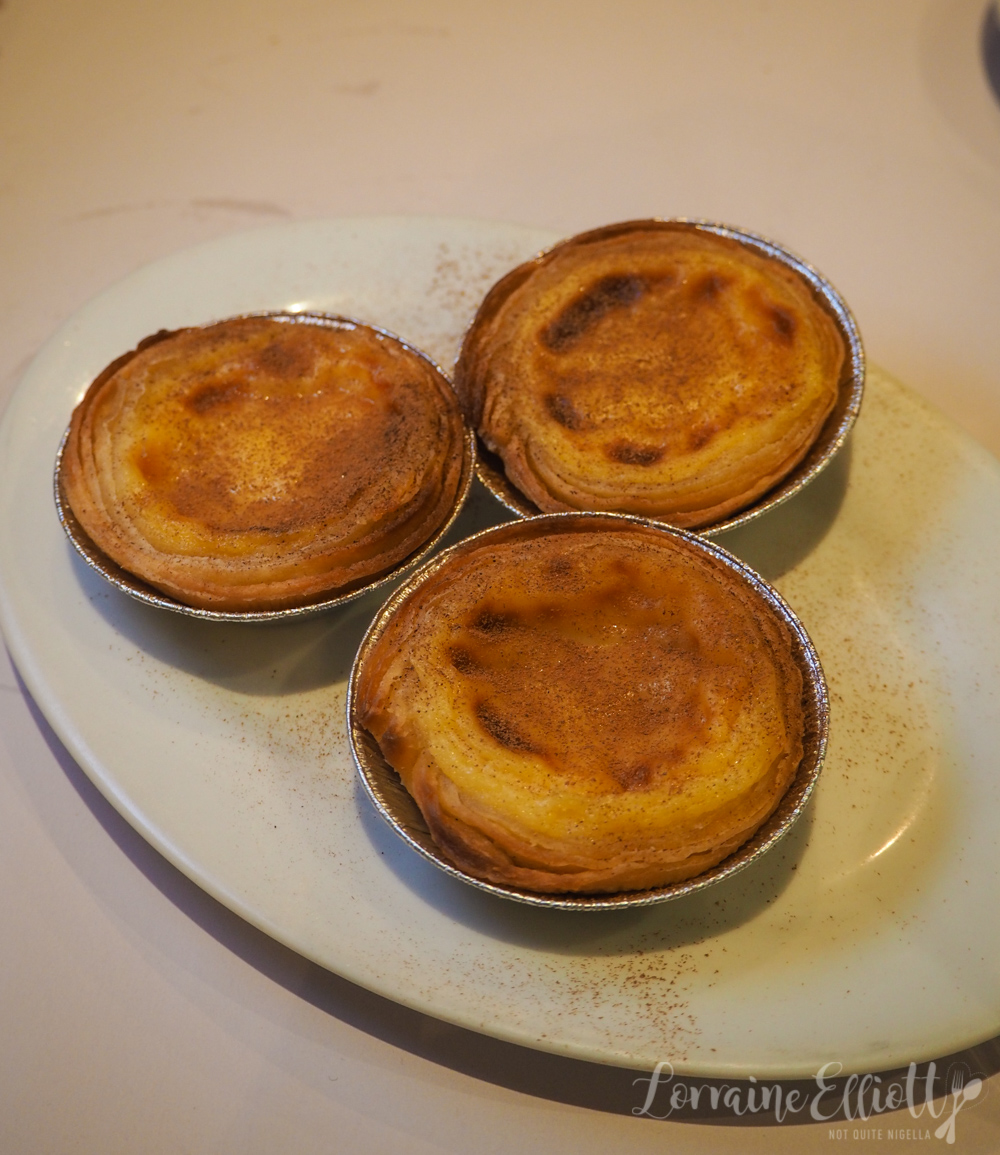 The Portuguese custard tarts aren't quite to the level that we want. They're served cold which is not an ideal start and I think I'd give these a miss, especially if you've had really good ones. 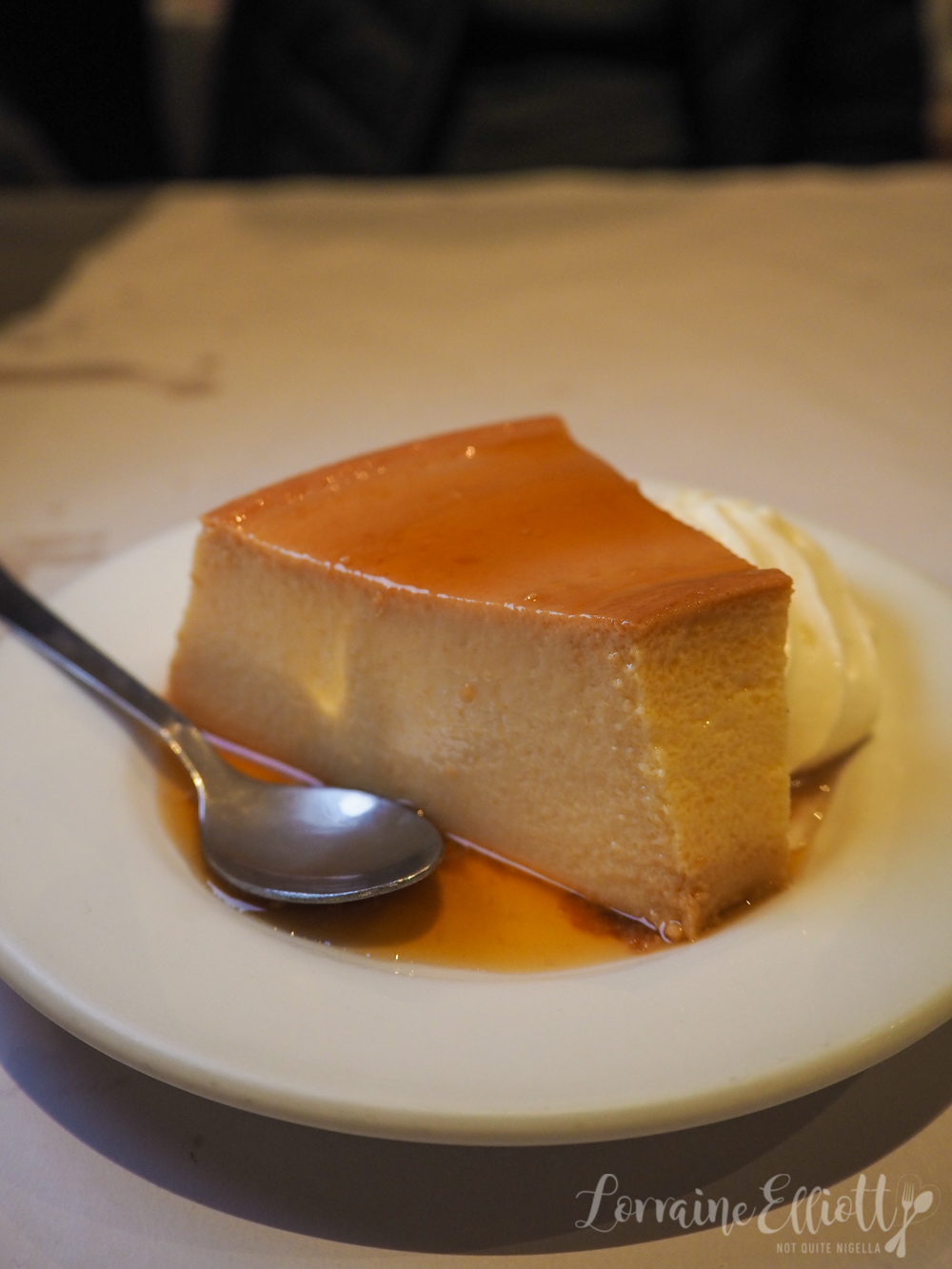 You're better off ordering the flan, a wobbly creamy custard with a puff of cream on the side.

As we leave we say goodbye to Queen Viv who says, "This was the perfect birthday dinner. It satisfied all my favourite things," she said laughing because no Queen Viv adventure is complete without getting lost or something odd happening.

On my way home I answer Monica's text. "So yummy and quirky. Queen Viv loved it, It was perfect for her b'day," I said sending her a photo.

Then Monica texts me, "OMG you went to a different Portuguese club!". Yep in classic Queen Viv fashion, there's another twist to the tale and although we had easily found the menu items that Monica has recommended, we had indeed gone to the wrong Portuguese club! I can't help thinking that it was a minor miracle that we all ended up at the same club that night too...

So tell me Dear Reader, have you ever gone to the wrong restaurant? Do you like Portuguese food? What sort of place did you go to for your last birthday?