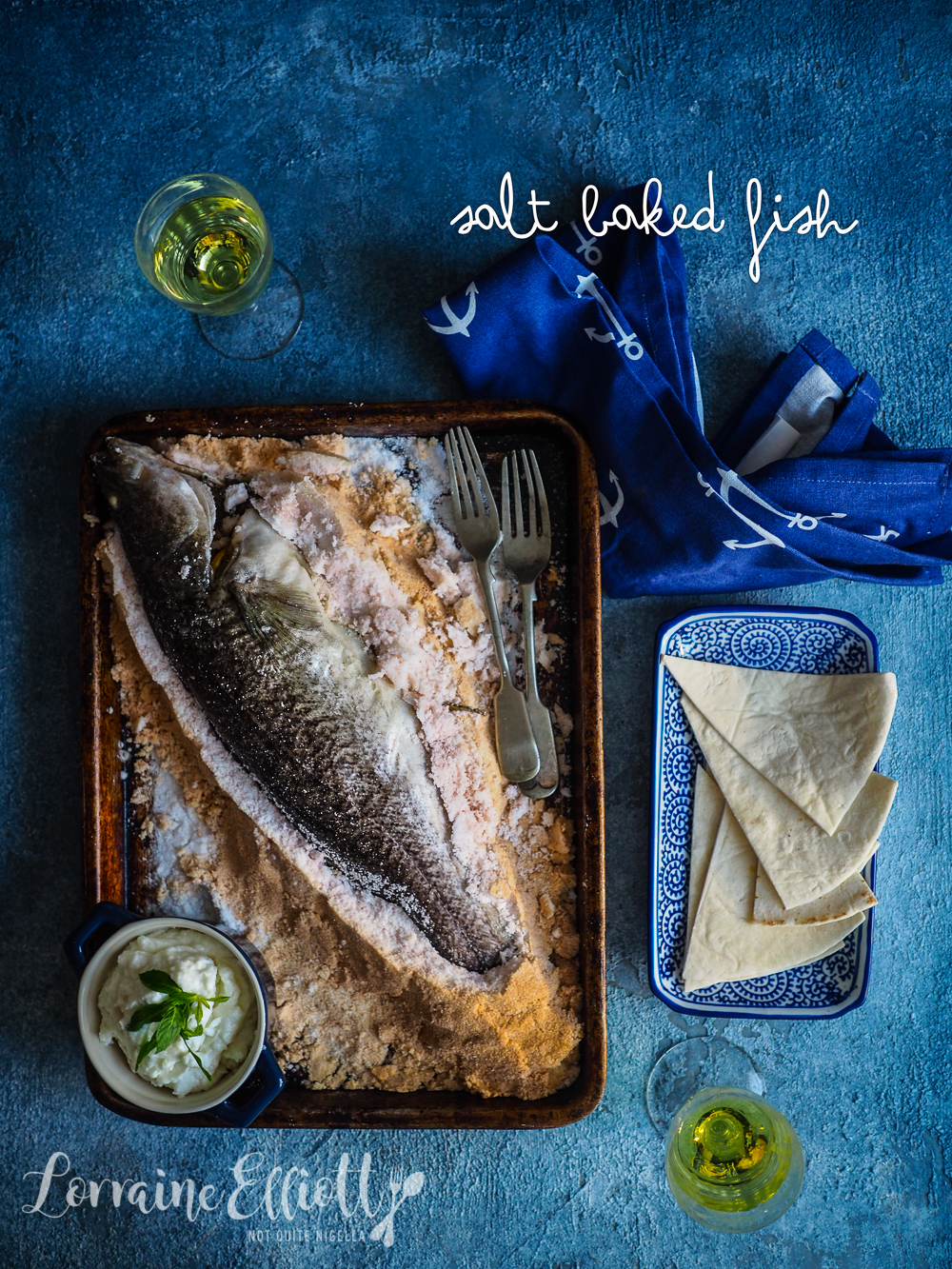 This salt baked method of cooking fish produces the most beautiful results. The meat of the fish is already seasoned from the salt plus it is incredibly moist thanks to the hard salt casing. It's also spectacular to crack this open at the table to reveal the fish inside! If you love whole fish this is a pushy recipe Dear Reader!

My lovelies, I didn't realise how good this would be. Certainly I've had it at restaurants (where it tends to be rather pricey) but I think this home baked version was even better. I think it was a combination of a really delicious type of fish like the Murray Cod as well as the salt bake method.

The salt provides a moisture sealing cover that steams the fish. You don't eat the skin (it's too salty for that) but the seasoning permeates through to the meat so that it really doesn't need anything save for a slice of lemon. I paired it with some garlicky toum because I love the stuff. 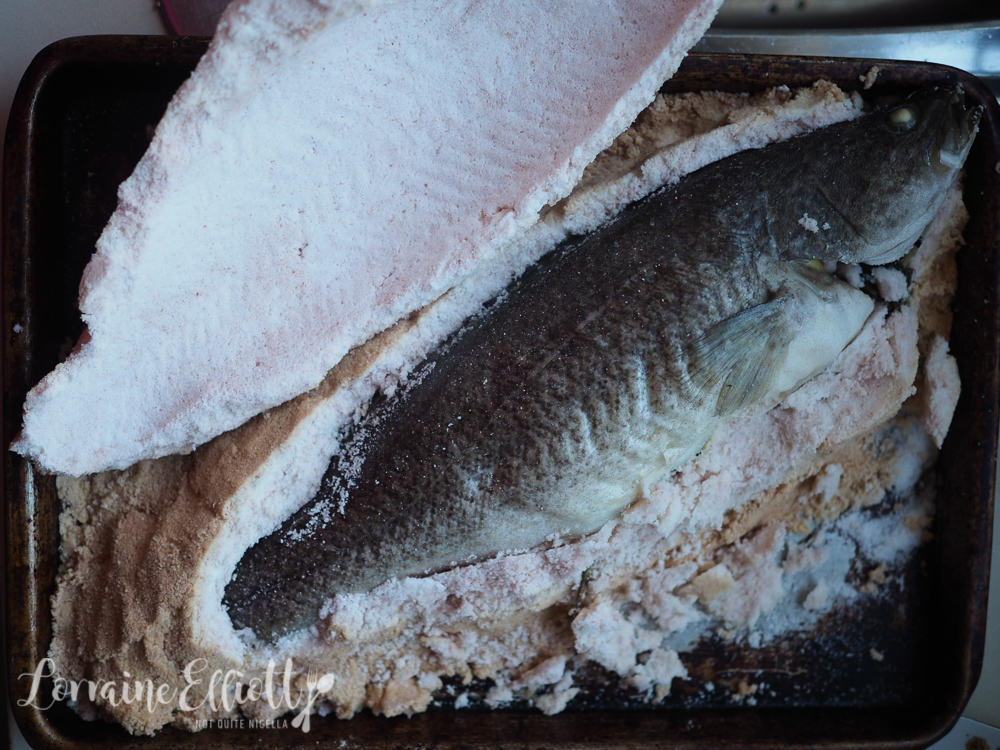 On the topic of salt, we've been wanting to get an air purifier because I have allergies to dust and mold. Now the Elliott way of doing this is with a Himalayan salt crystal lamp which is said to purify the air around it. I'm all for natural remedies but I wasn't sure if it would do as good a job as an actual electronic air purifier.

So I was discussing it with Mr NQN. "Do you think we should get an air purifier? There's lots of mold in the walls and it gives me the sniffles," I said to him.

"No," he said. He has a tendency to say no to things that don't affect him, especially home improvement related things or things that cost money. I asked him why and he said, "I think we need to work on the source of the problem, why there is mold," he said. 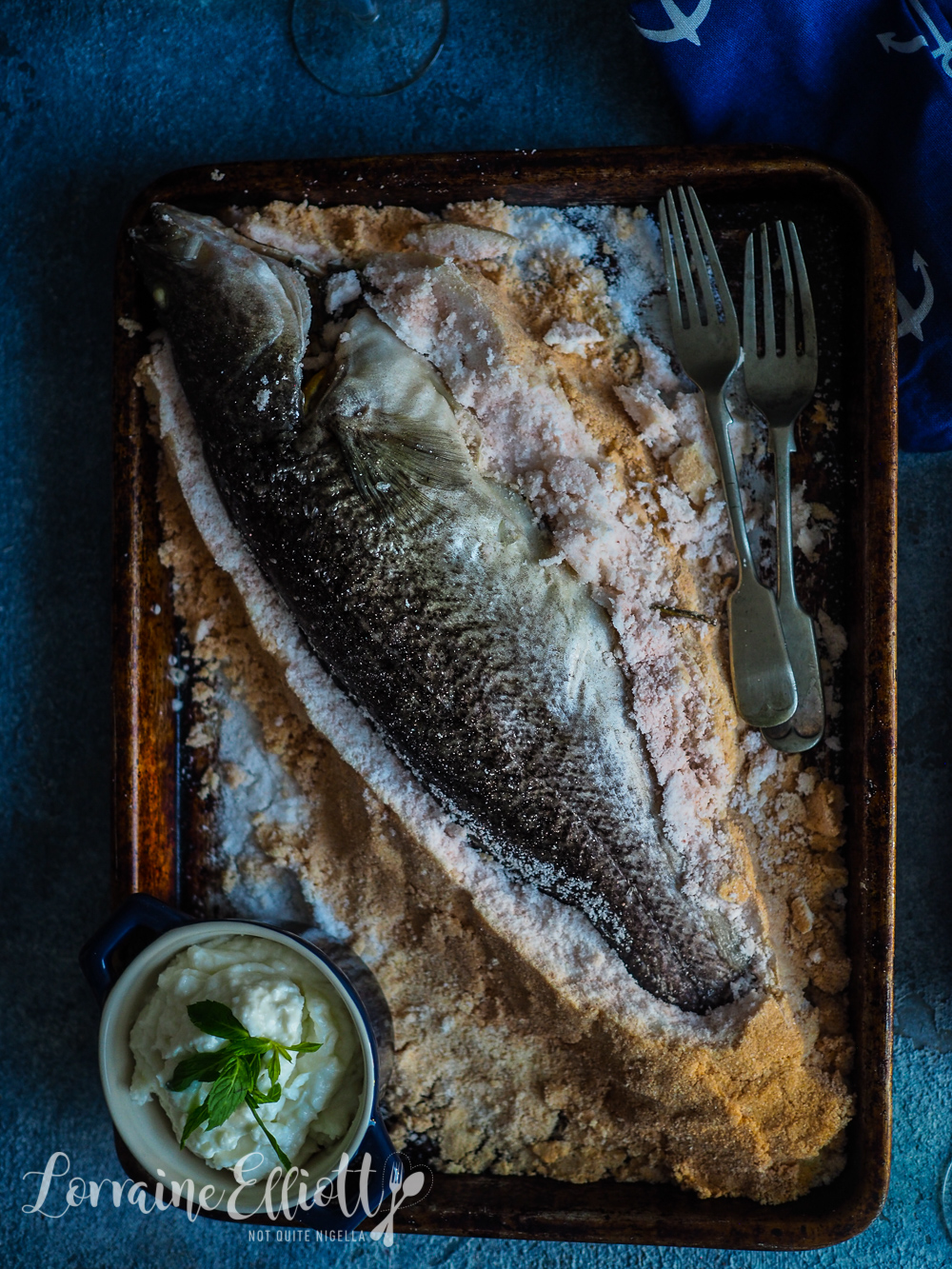 "The source of the mold is you never opening a window ever or opening the window after your shower," I said to him because I have asked him for at least 10 years to crack open a window. "Anyway we're getting one!" I said brightly.

"Why did you even ask me?" he said. I thought about it for a moment, "I like there to be a discussion but I didn't like your answer," I answered. "You'll love it," I added. In my favour, all of the home improvements I've made he has actually loved.

And the salt baked murray cod is another example. He usually eschews cooked fish and I have to make him eat it because it's good for him. But this one he adored. The key to this is the moistness with the fish. It really keeps it in. In fact he had seconds of this fish and would have eaten thirds if there were any!

So tell me Dear Reader, do you ever have these sorts of conversations with your partner or friends? Who makes the final decision? Have you ever salt baked a fish like this?

Cooking time: 30-40 minutes (depending on size of fish)

Step 1 - Preheat oven to 200C/400F and take a tray larger than your fish. Mix the salt with the egg whites until it creates a texture like damp sand. Add a bit of cold water if needed. 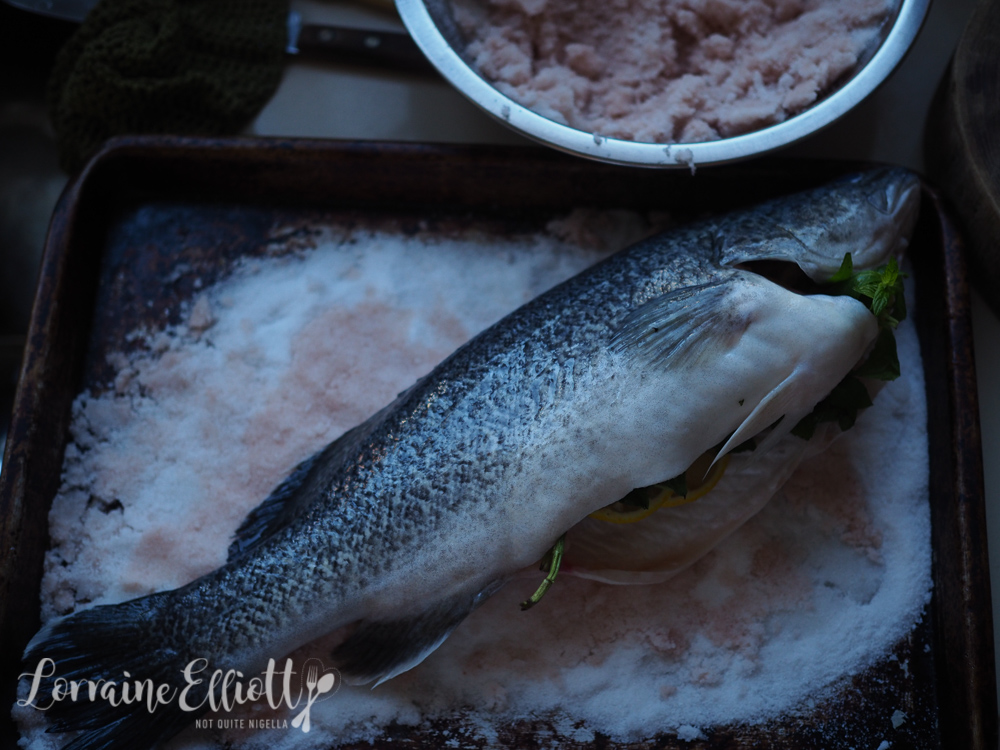 Step 2 - Lay out a bed of the salt mixture on the tray. Place the fish on top of it and then cover with the remaining salt until the fish has been completely covered in the salt with roughly an even thickness. Bake for 40 minutes. 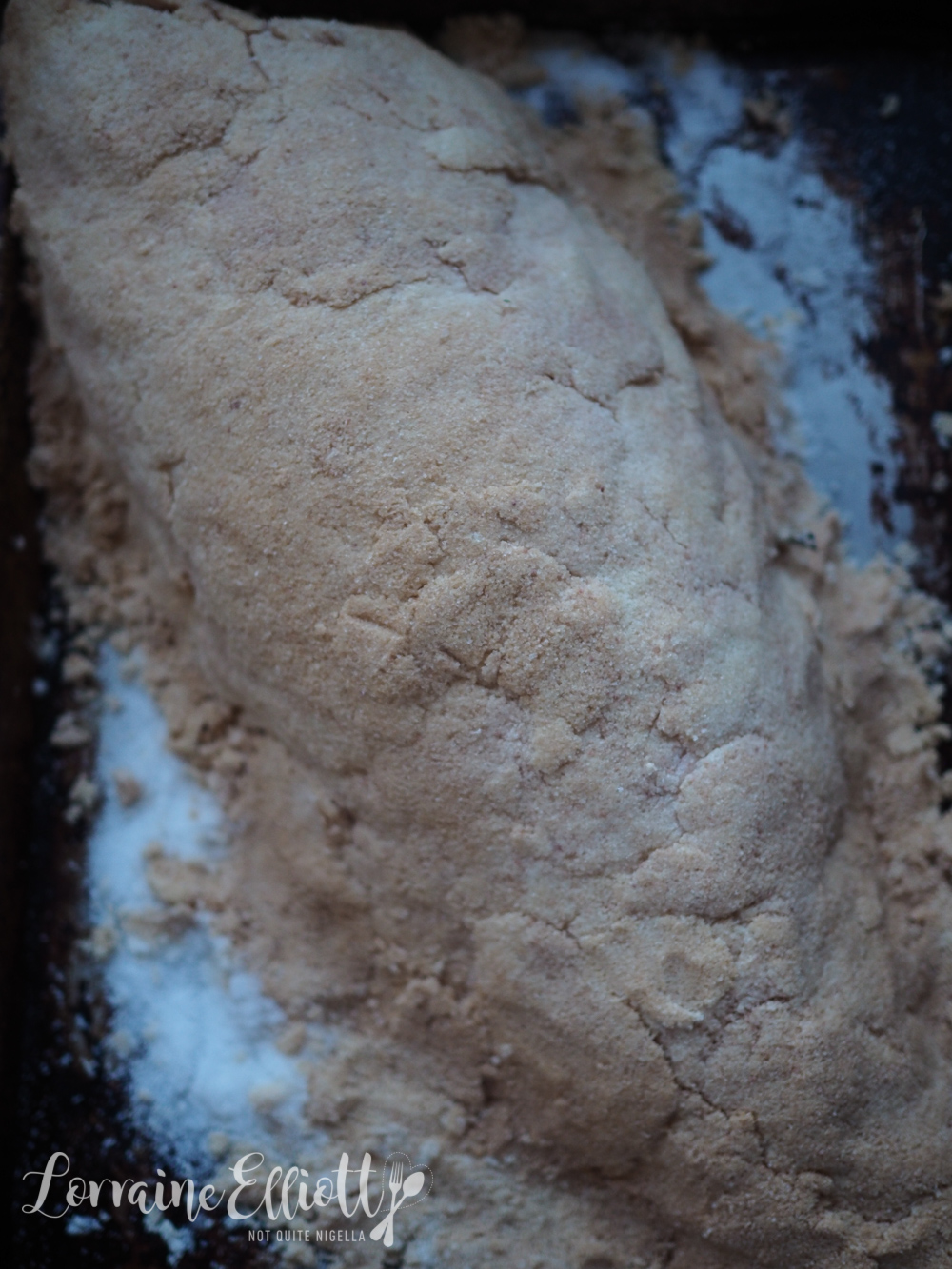 Step 3 - Crack open the salt with a sharp knife and then remove the top in one piece at the table. 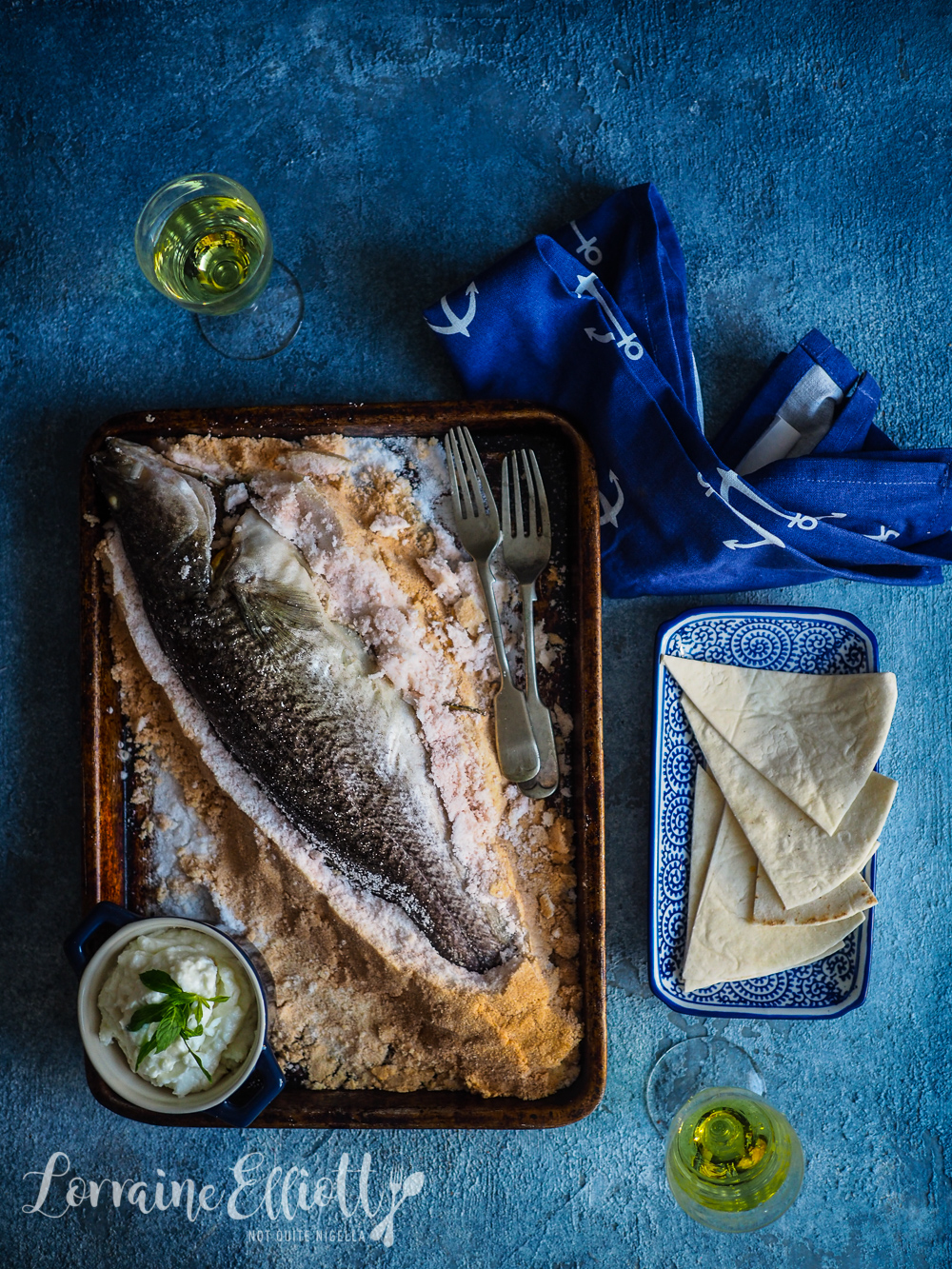