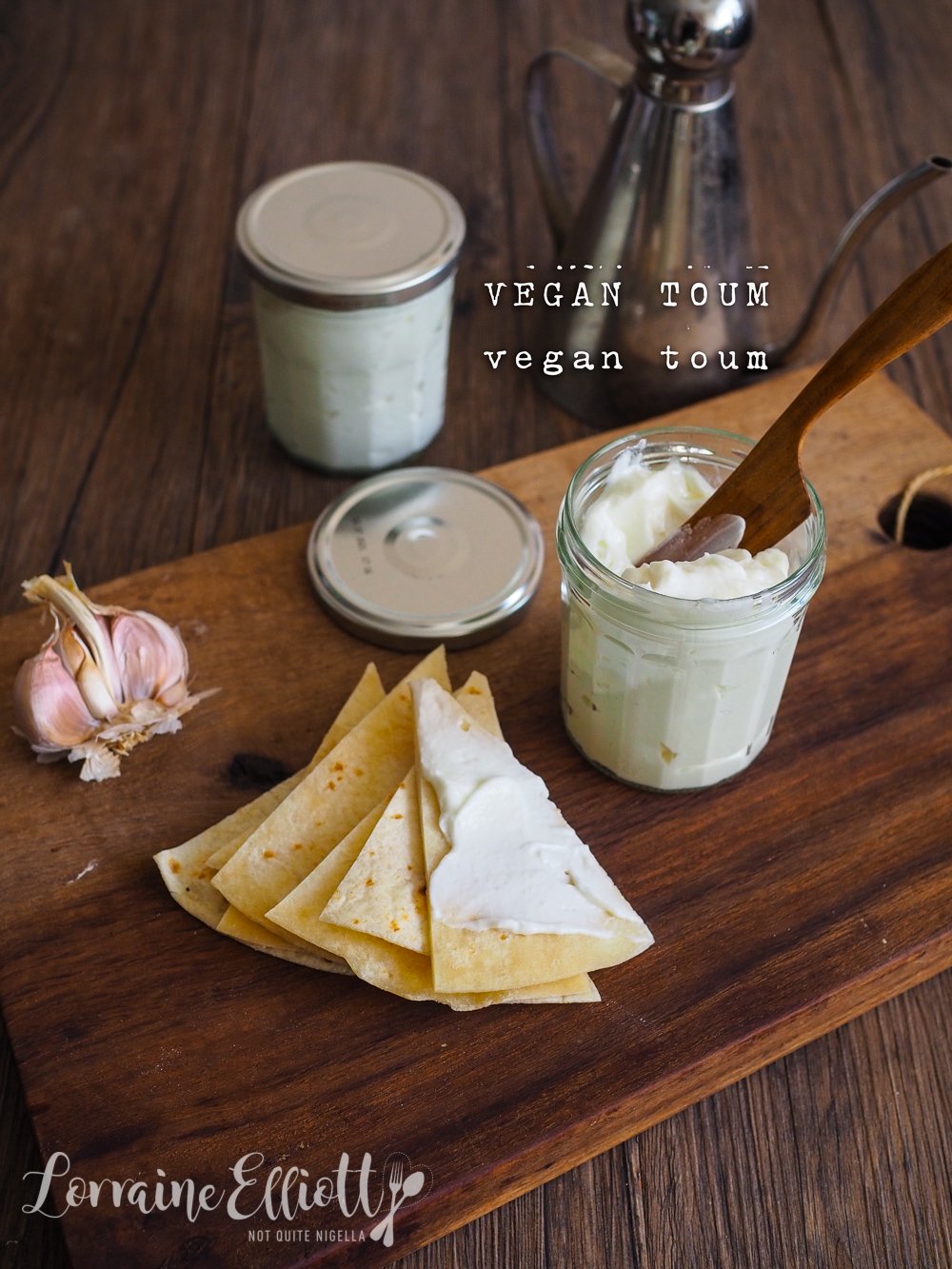 Lebanese toum or garlic sauce is food of the gods. This creamy, fluffy dip can be found at Lebanese chicken shops but did you know that you can make this in less than 5 minutes and that it is easily veganised? This is a definite pushy recipe Dear Reader!

I feel like any time someone tries toum, it flicks a switch in their brain. Suddenly life is rosy, life is delicious and you have now awakened a devotion to this moreish garlic fluff. If anything, toum is too addictive so I don't have it on hand all the time because I am powerless to resist it.

I've made 5 minute toum before after failing around a dozen times using the oil drizzle method that just netted me a big jug of oil and garlic. Then I found a method where you just put everything into a jug and whizz and in less than a minute it will transform into the lightest, fluffiest dip. It's truly magic. The only thing is that you use an egg white to emulsify it all and I wanted to see if I could make a vegan or plant based version. 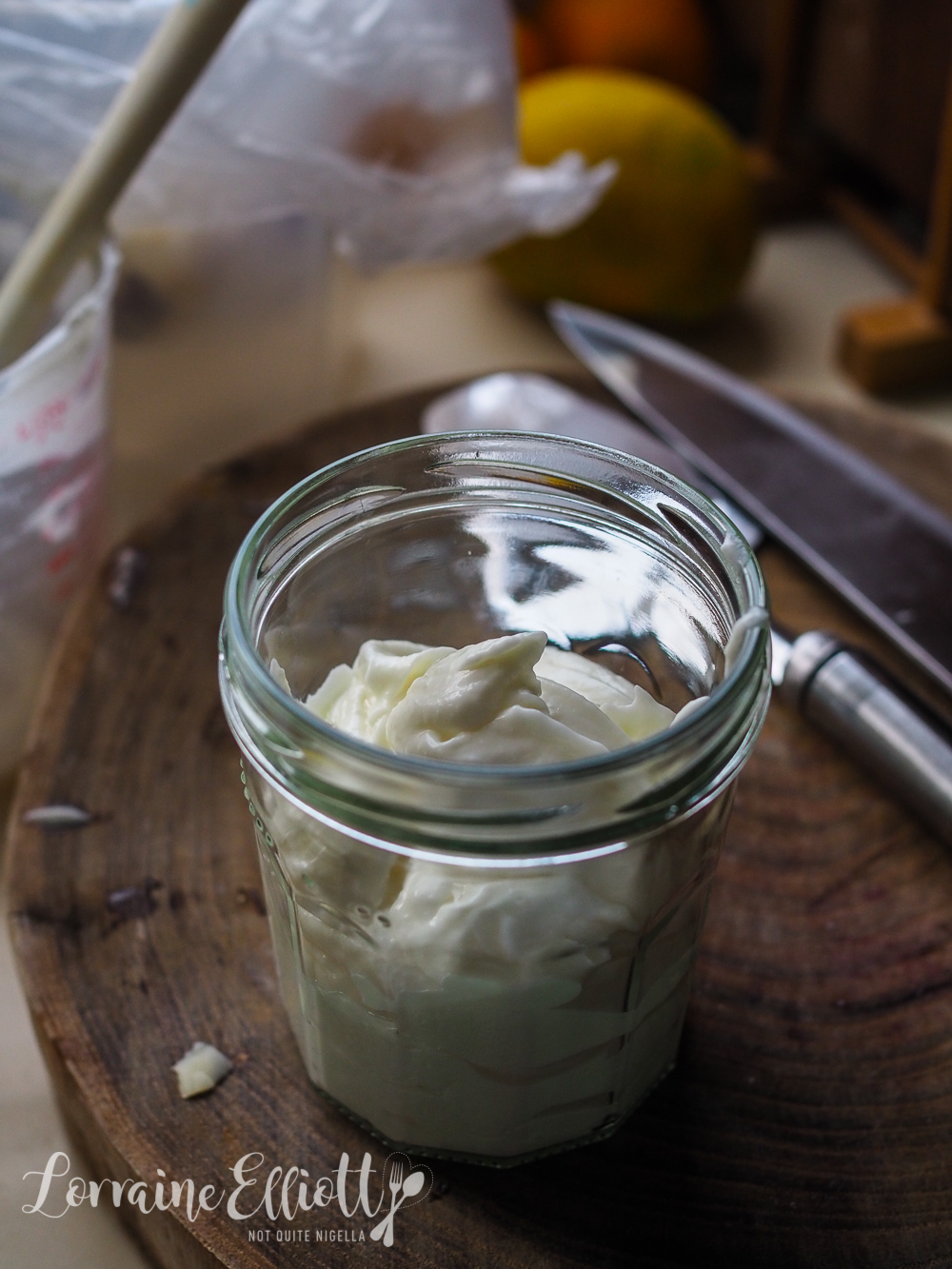 I'm glad to report that it's very possible to make this by using aquafaba or tinned chickpea water as an egg white replacement. I had to play around with quantities. You do need a bit more aquafaba than egg white so it's not a matter of swapping equal quantities but please promise me that you'll try this, at least once (and I'm sure you'll curse me as you become addicted). I promise that adding this toum to anything savoury will improve it vastly.

How to make vegan toum or garlic sauce

On the topic of addiction, Ivy recently got me a bit hooked on a new tv series called Drugs Inc. I'm very much against drugs probably due to my control freak nature so drug documentaries don't usually hold that much appeal but she pointed me towards the final episode of the series.

Honestly, it gave me NIGHTMARES.

It was about this drug that seems to have taken over Russia called Krokodil. It's a fraction of the cost of heroin and the kicker is that it is called krokodil because it literally eats your flesh and your skin resembles that of a crocodile (DO NOT google pictures of the effects of krokodil if you are eating or squeamish!).

In fact I used to think I wasn't a very squeamish person but I whimpered like a puppy when I saw these photos and by the end of the episode I felt quite ill. I don't want to ruin the episode for anyone that might watch it but I will say that it is utterly fascinating and ghastly and an excellent anti drug tool!

So tell me Dear Reader, have you watched Drugs Inc? Have you heard of Krokodil? Have you tried making toum and are you addicted to it?

Step 1 - Place all of the ingredients in a tall jug that can fit your stick blender. Blend on high speed moving the blender in circular motions making sure to make a pass over the oily sections. Within seconds it will transform into a fluffy dip.

Troubleshooting: if your toum doesn't emulsify and become fluffy and white, add another 20ml more aquafaba.