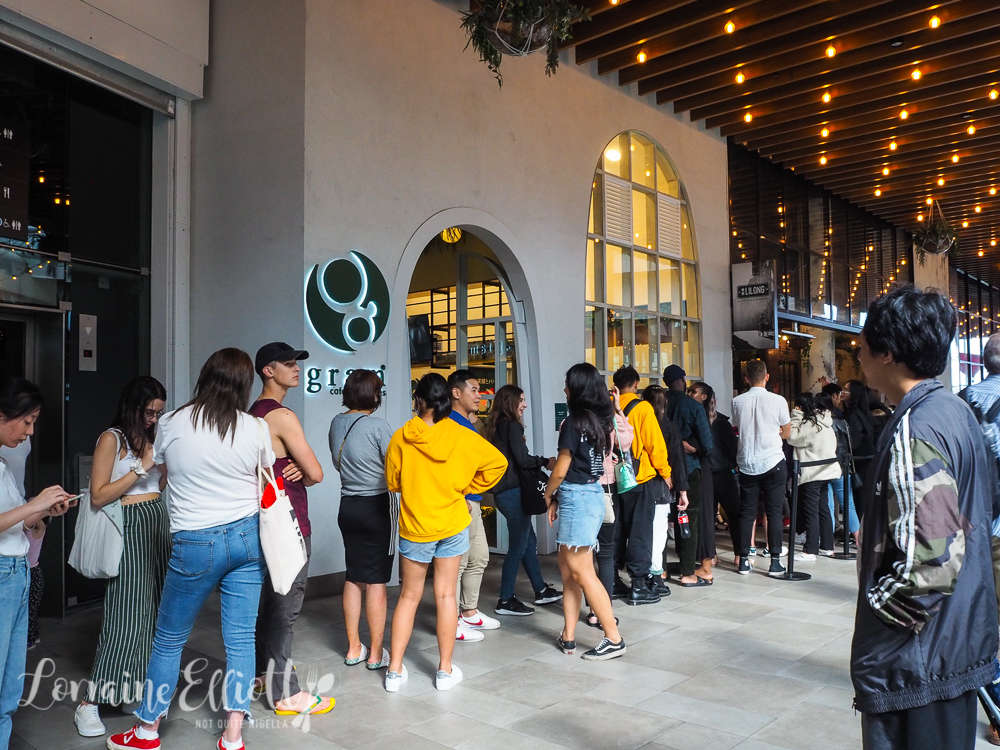 Everyone's talking about Gram pancakes, the Japanese chain that has just arrived in Sydney. Gram is all about soufflé pancakes aka inch thick, wobbly jiggling pancakes. But with an idiosyncratic system and long queues, is it worth the hype and wait? 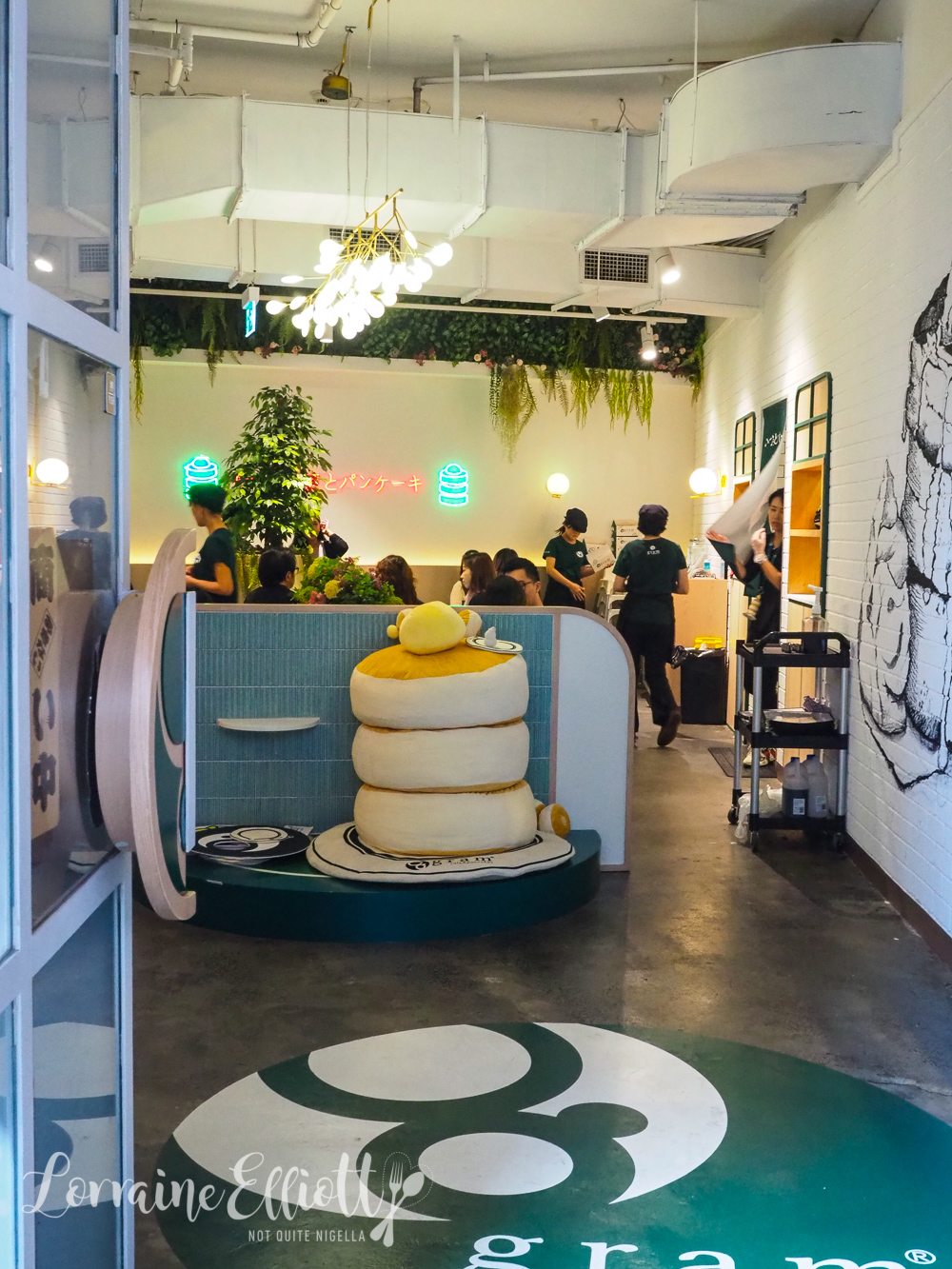 When Monica and Marco swing by to pick me up one Saturday afternoon we're all excited for a pancake adventure in Chatswood. Gram is located at Chatswood Interchange's Dining District opposite General Chao on the third floor above the train station. We first see it by the long queues outside the café. 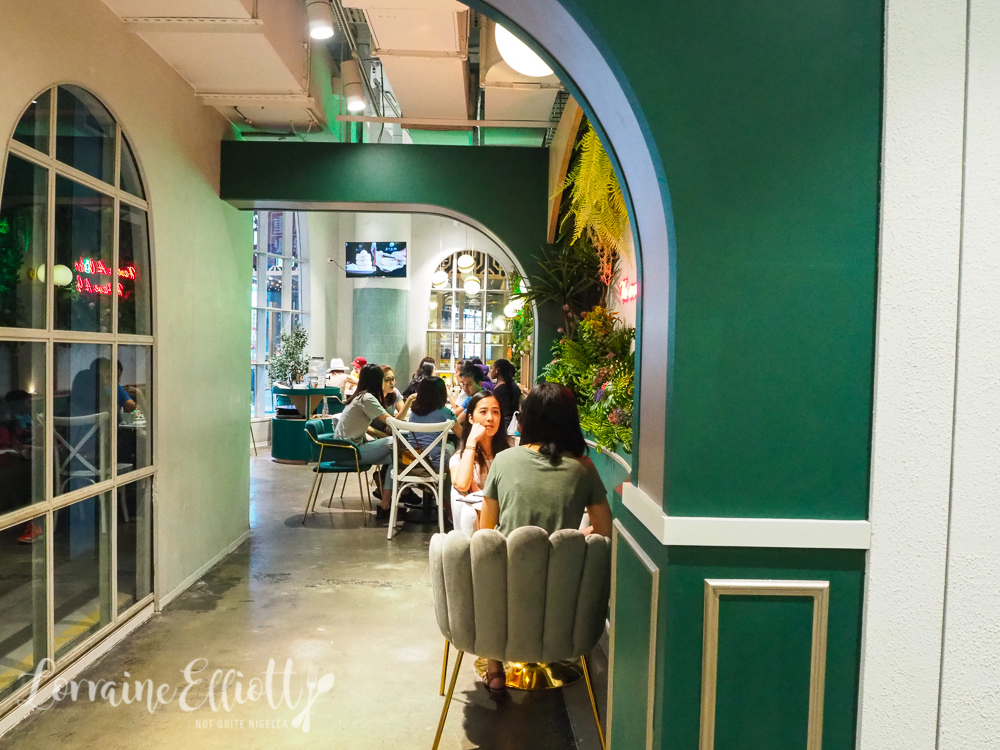 Gram is named after Instagram because the pancakes are so insta-friendly (sometimes I think we forget that food is to eat, not just to photograph!). The chain first opened in Shinsaibashi, Osaka in 2014 and now boasts a 48 stores around the world, mostly based in Japan. 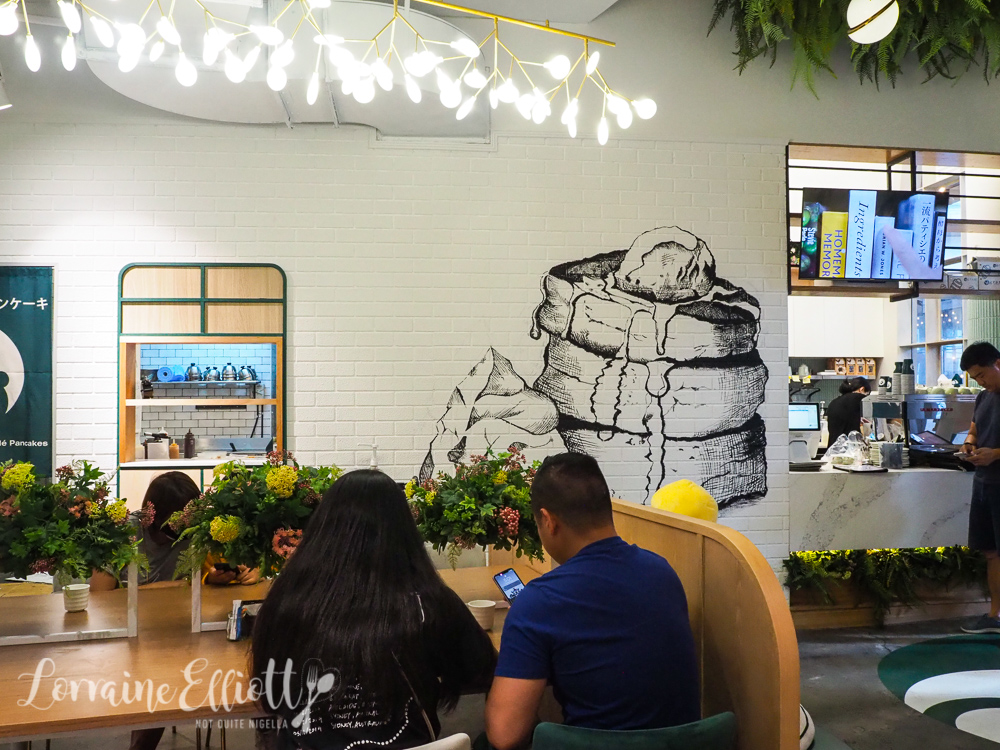 The queue ambles along slowly but surely. We will later deduce that the queue is a product of the super long time taken to make the pancakes. The soufflé pancakes called "Premium pancakes" take 40 minutes to make according to the menu warning. If the pancakes came out quicker the queue would move along quicker but as it is, the ever present queue is an effective FOMO stoking marketing strategy. 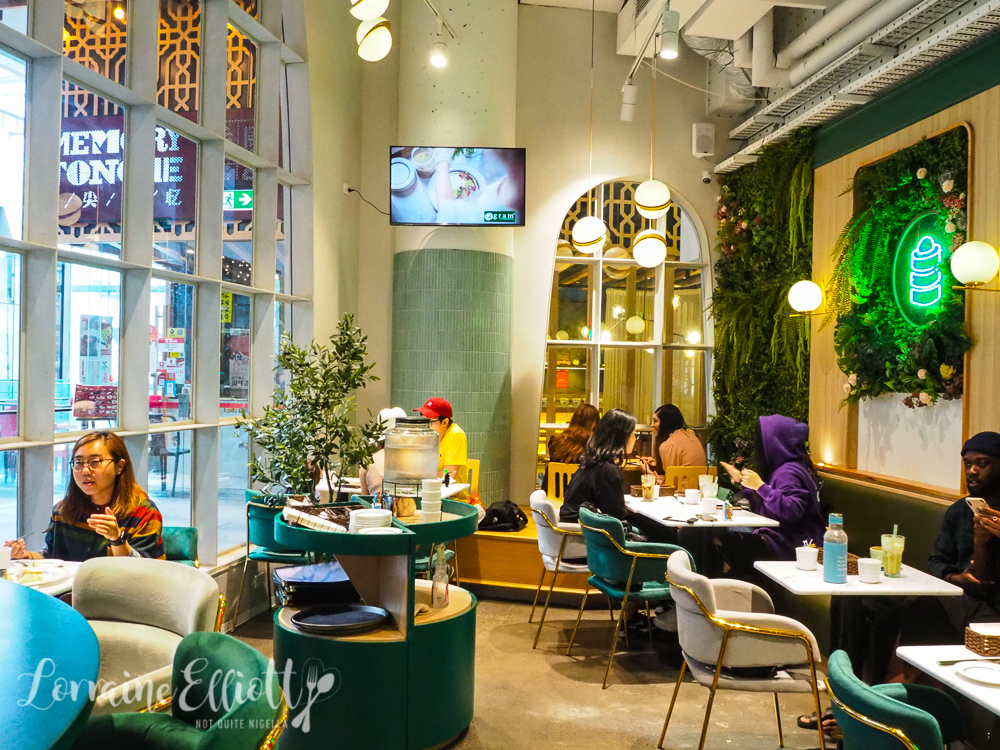 Monica and Marco have already eaten a serve of dumplings while waiting in the queue. An hour later we reach the last section of the queue with a row of seats, once two groups have dropped out in front of us. It's there that they ask us what we'd like to order. We've already looked at the menu and I was surprised to see that the premium fluffy pancakes comes in only one flavour with butter, cream and maple syrup. The rest of the menu is made up of cold pancake stacks with a more regular thickness in a variety of flavours as well as French toast. 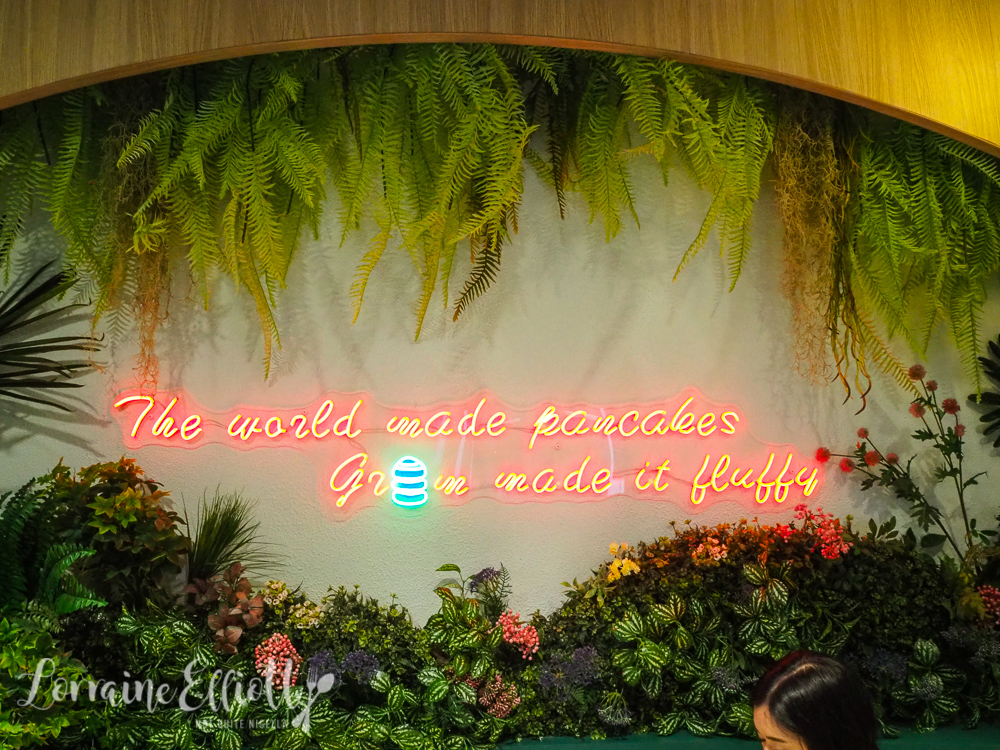 When we reach the front of the queue have a choice of squeezing the three of us onto a table for 2 or waiting and we decide to squeeze. As soon as we sit down they bring the bill. "Please pay this when you're ready," the waitress says and when we look surprised at the ballsiness of giving a bill before any food or drink has hit the table she quickly adds, "Once you get your food". 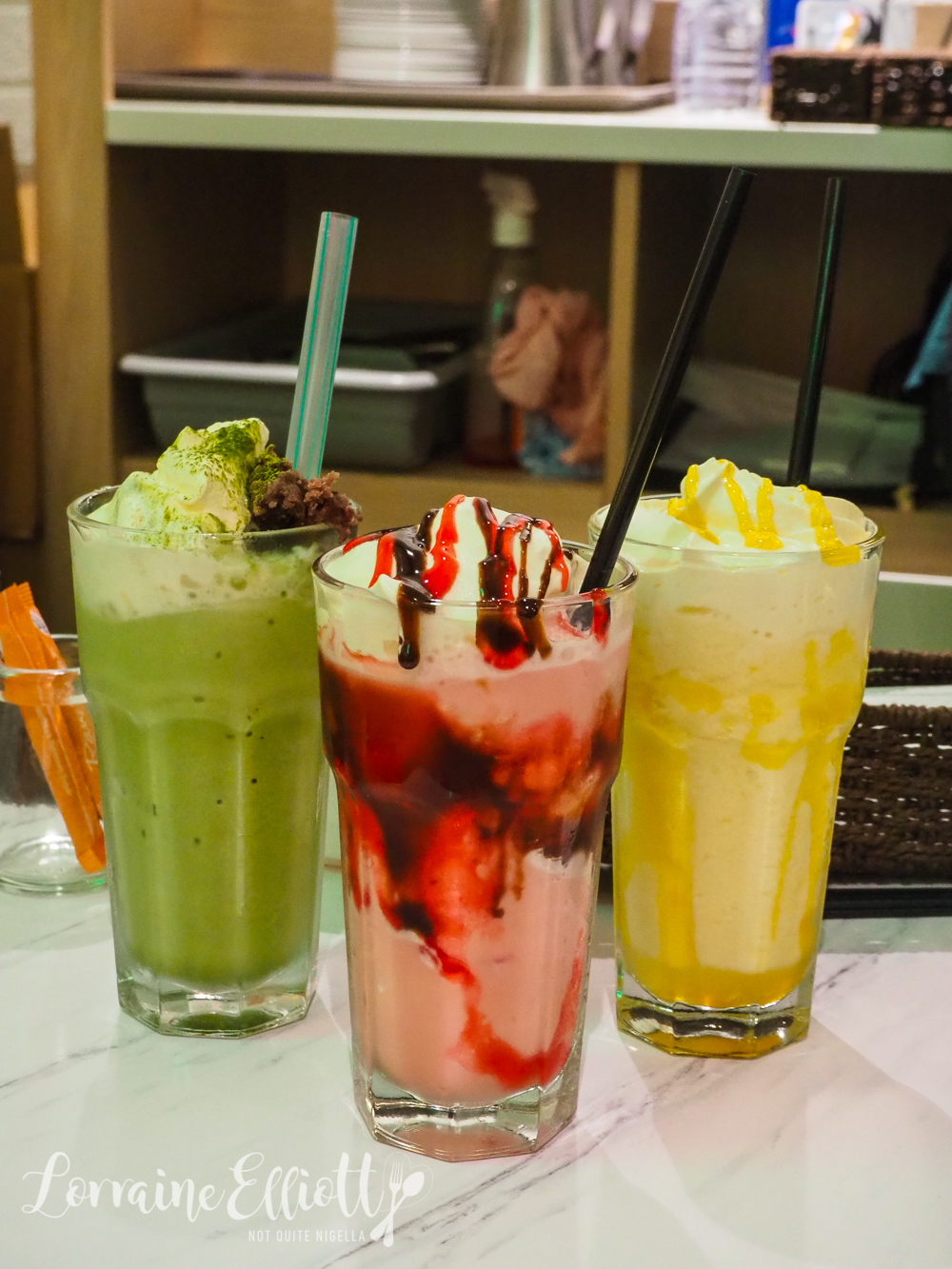 The drinks arrive and we have a mango, matcha and a strawberry smoothie. The mango and strawberry are made using a syrup that seems like it has little to do with the actual fruit itself. They also look nothing like the picture which looks icy and enticing. I take one sip of my strawberry and chocolate smoothie (the chocolate syrup is a surprise as it is not in the picture) and don't want any more. Even sweets lover Marco won't have a bar of it. The matcha smoothie is better because it actually tastes like matcha and has a little sweetened red bean. 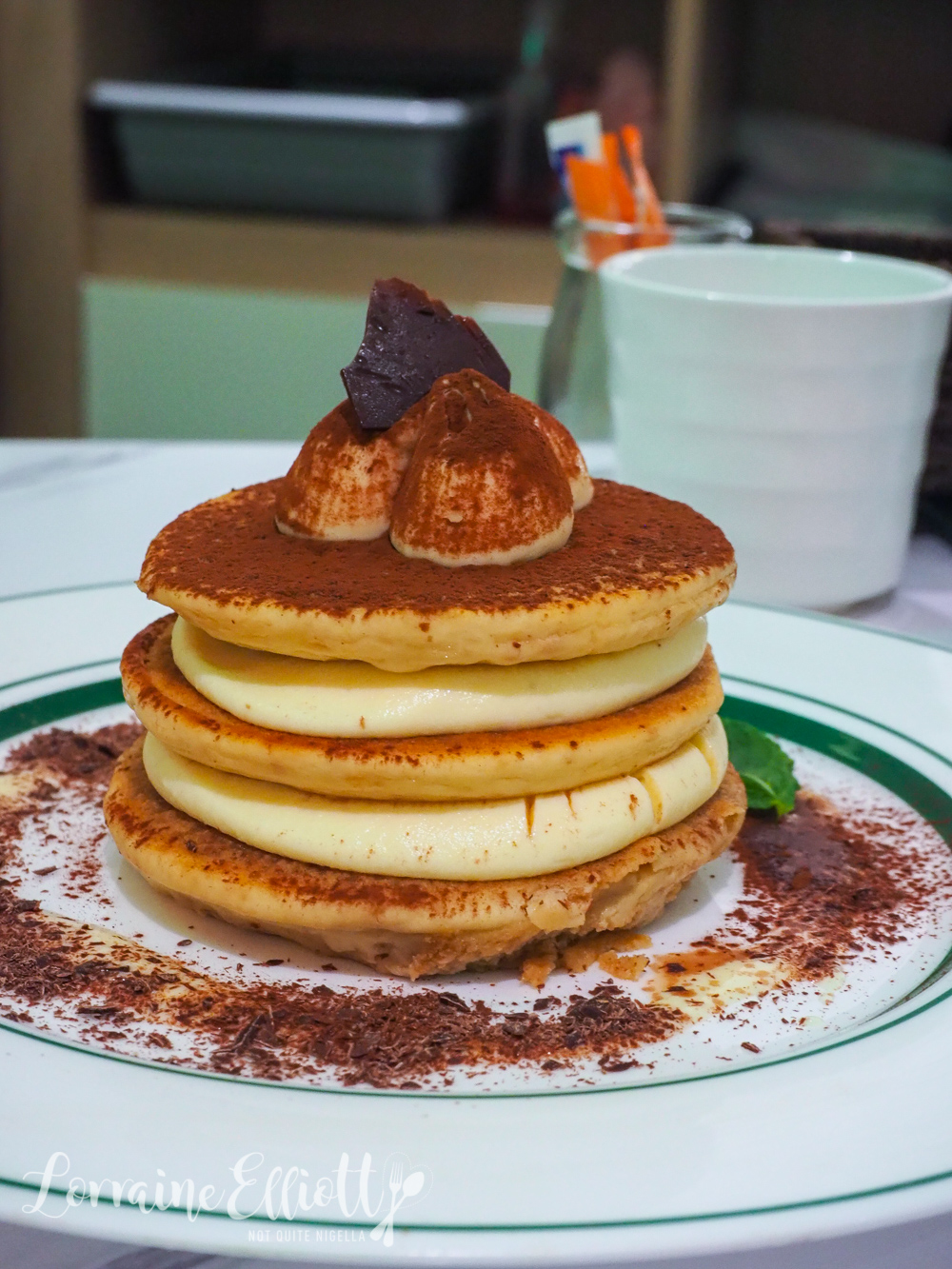 After around 20 minutes the first pancake stack arrives. Timing is a real issue here and you really have to share your stack because there are huge gaps between each pancake stack arriving which is baffling because it isn't that large a restaurant and the kitchen looks decently sized. The tiramisu pancakes are pre-made and served cold and then filled with tiramisu mascarpone and dusted with cocoa. The pancake itself is very dry and I've never eaten pancakes this dry before. It's not even that they're cold, when I've made pancakes and put leftovers in the fridge they're not this dry. I don't have any more than a bite of these and Monica and I feel that they're simply not worth the calories. Hungry Marco does finish these. 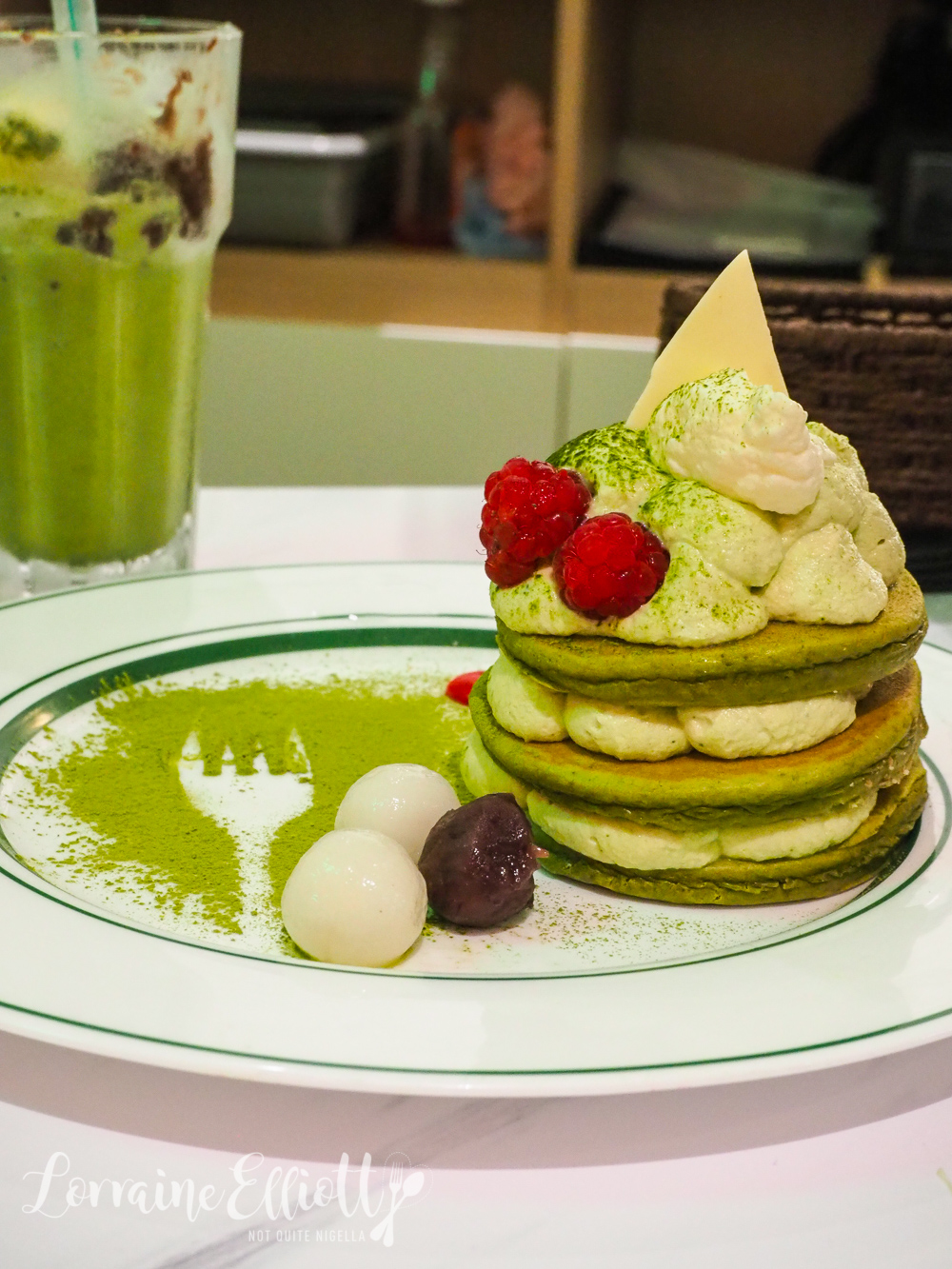 Slightly better are the matcha pancakes with matcha cream, red bean sauce and shiratama mochi. The flavour of matcha is good and strong and I do like the chewy mochi although there are just two of these so you don't exactly get one in each bite. But the problem again is the pancake itself. It's just so damn dry. I feel as though the thumbs up "recommended" icon on the menu is mocking us.

By now we've been waiting a while for our premium pancakes. It has been 50 minutes since we sat down and 1 hour since we placed our order in the queue. We enquire about the pancakes they tell us that they will be another 20 minutes. They apologise again and again and honestly the staff are lovely and number many. Perhaps they could do with more chefs in the kitchen instead. Honestly if it weren't for the stellar company of my friends it would have been a complete shambles. 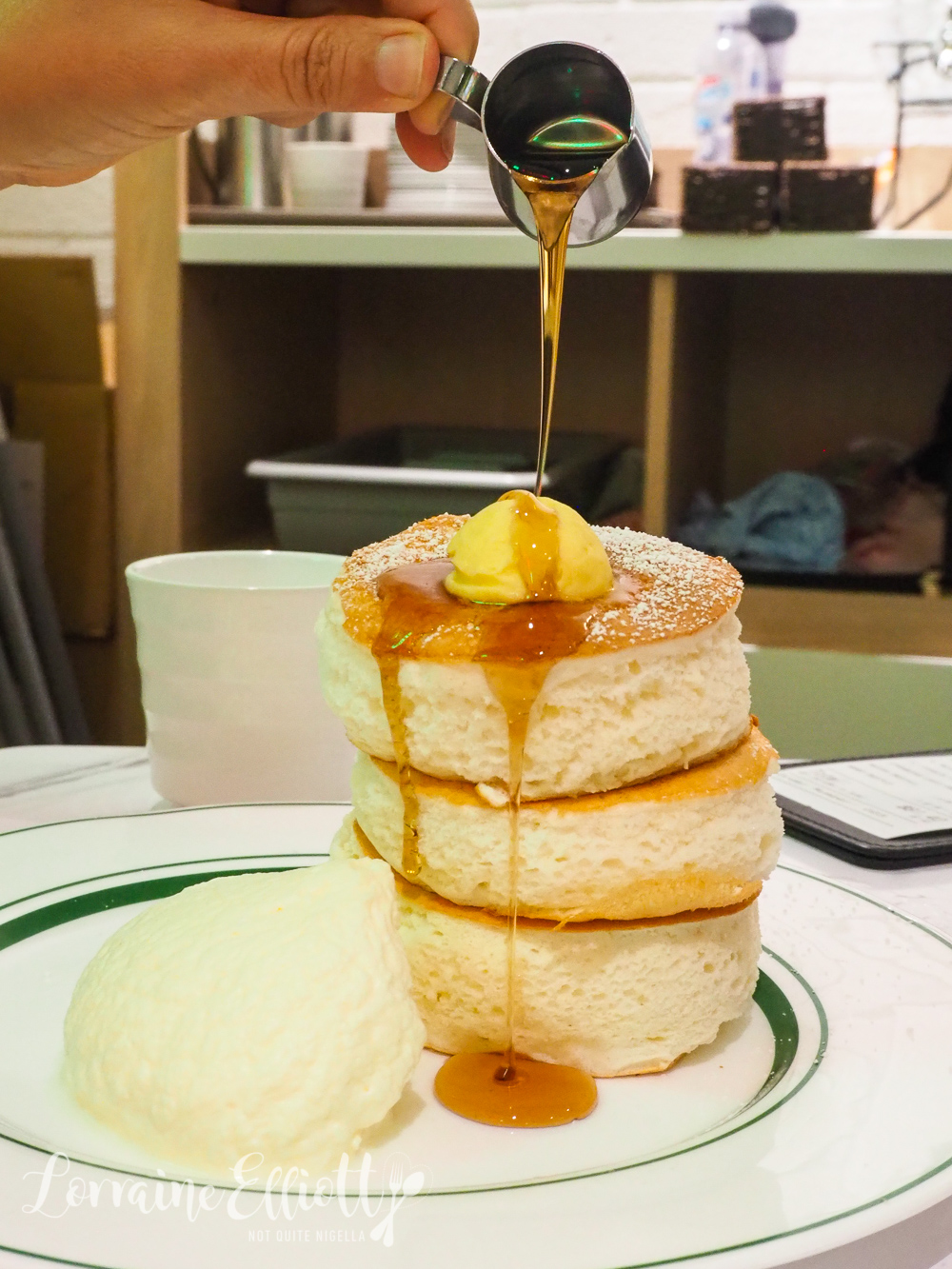 1 hour and 20 minutes after we first ordered them in the queue, the premium pancakes finally arrive like Mariah Carey arriving fashionably late to the after party. The pancakes are jiggly and piled three high to a stack. There's a round of butter on top and a squeeze of nama sweet whipped cream and a thimble sized jug of maple syrup on the side. All of the ingredients are said to be imported from Japan for these. Monica quips, "I've got to get botox right now because I've aged 20 years!". The premium pancakes are actually delicious - soft and fluffy and moreishly light. There isn't enough maple syrup but we have had enough of waiting for things and can't be bothered asking and waiting for more of this. We're not sure why the butter is stone cold but the cream is nice. But waiting 1 hour and 20 minutes seems crazy to have to wait for these.

So tell me Dear Reader, have you tried Gram pancakes? Or have you tried soufflé pancakes and what did you think of them? What is the last thing you queued a long time for and was it worth the wait?