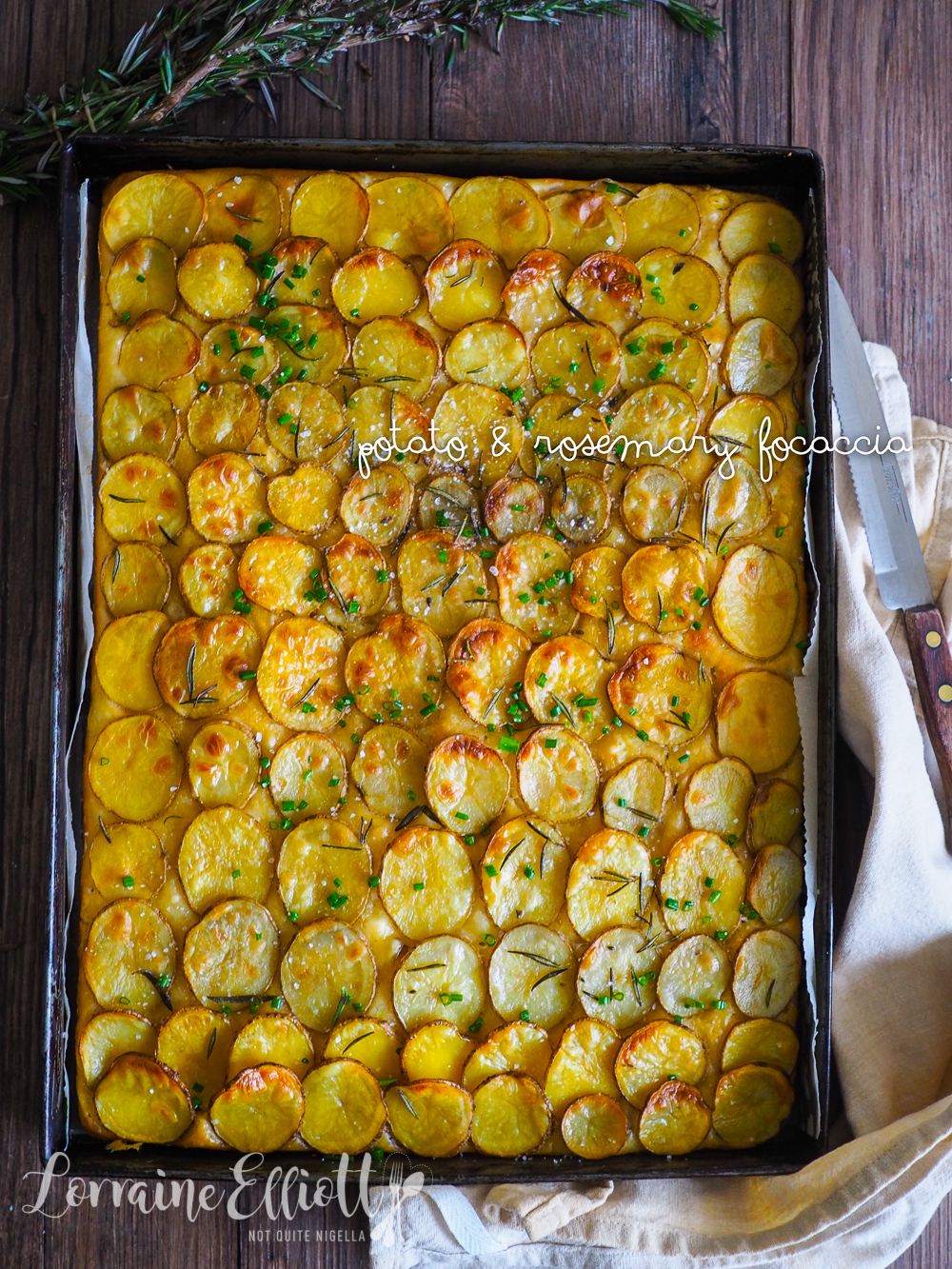 Dear Reader, out of all the focaccia recipes I have made, this is my absolute favourite focaccia! Potatoes add a wonderful texture to focaccia but they also form a gorgeous, crispy layer on top along with rosemary and chives. It's half potato pizza, half puffy focaccia bread! Another wonderful thing about this focaccia recipe is that it is a no knead focaccia so you don't need any special equipment at all. If you are new to making focaccia, I urge you to give this beauty a go. This is a pushy recipe Dear Reader!

I don't know how I would even start to rate my recipes, but basically if I can't stop eating a food, I know it's a winner. The same thing also happens to me with eating out. If my friends or Mr NQN has to pull a food out of my hands (usually at my own insistence) then it's a winner. And Dear Reader, I had this exact situation with this focaccia bread. Even though this focaccia doesn't contain any cheese and is in fact vegan, it tastes like puffy potato and rosemary pizza with lots of cheese on it! I've used less oil than normal in this because I appreciate that people don't necessarily want to use a lot of oil but this still gives you a gorgeous crunchy bottom and spongy interior. 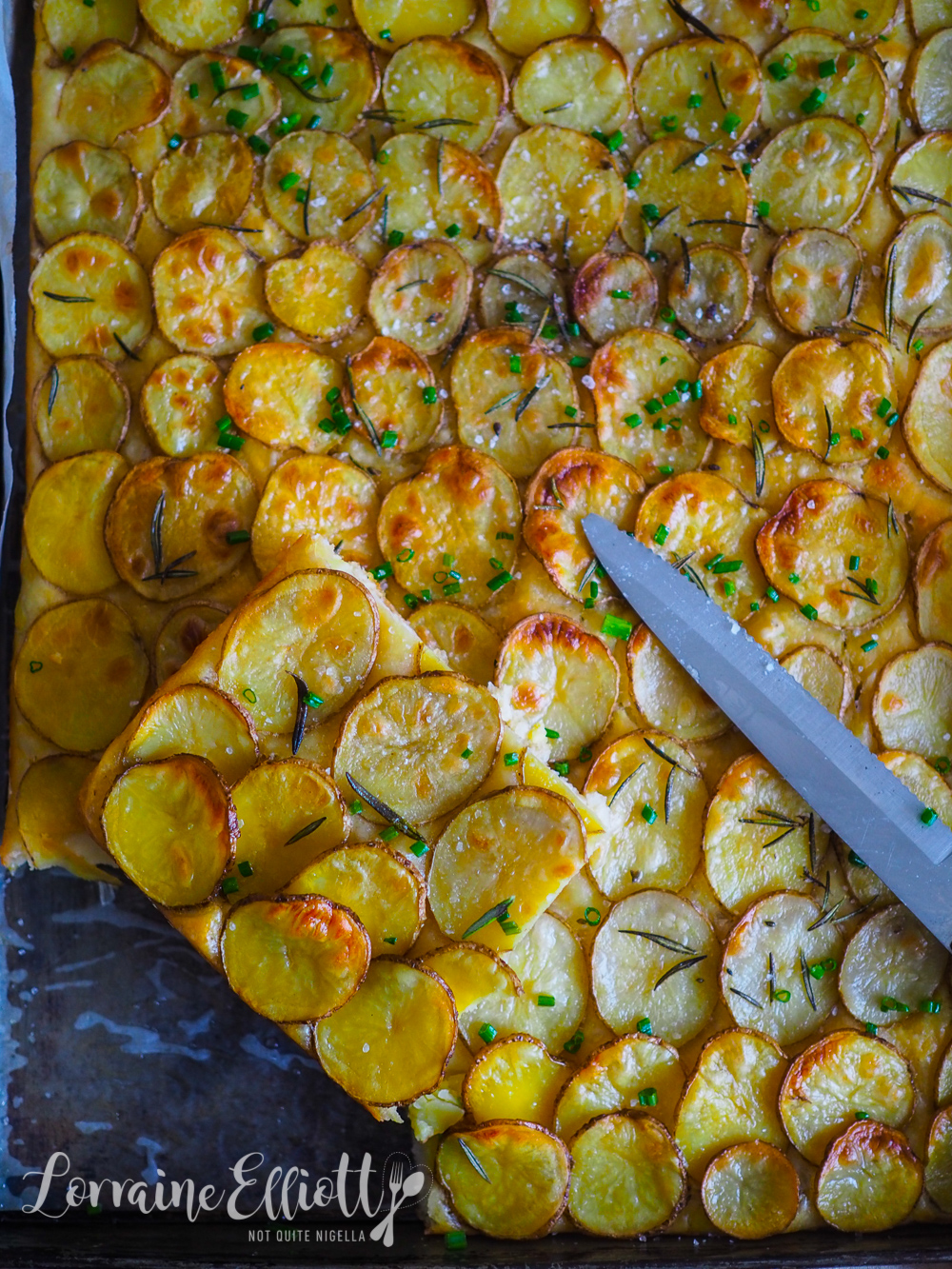 Potatoes in bread? Yes! Adding potatoes to bread gives it a wonderful texture. Even the water that potatoes are boiled in helps too. Potatoes add moisture and softness but also vitamins like potassium. It also keeps the bread fresher as potato starch molecules help to keep wheat starches from becoming stale.

No knead overnight focaccia vs quick focaccia: So I've shared many focaccia recipes and the no knead one is the polar opposite of the quick focaccia. This no knead focaccia involves mixing flour, water, salt and yeast together and letting it prove overnight so it takes 12 hours for the bulk prove. The quick focaccia has around 1 hour bulk proof. Whichever one you use is a function of the time that you have. But I will say that this overnight one won me over BIG TIME. 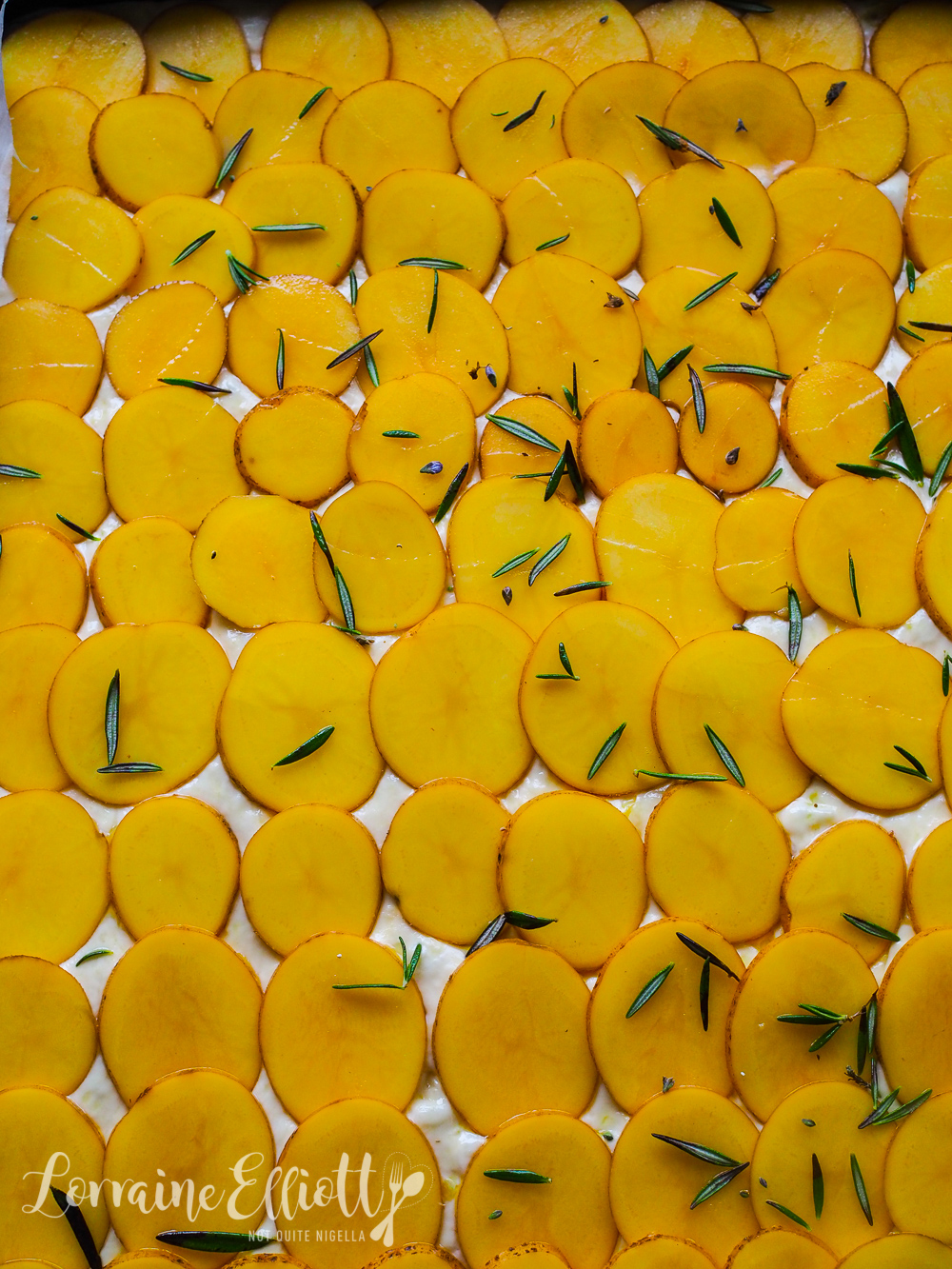 How To Slice Your Potatoes: I used a mandolin (my most feared and useful tool) to slice my potatoes to keep them even. Do not slice the potatoes super thinly as they will just curl and shrivel up in the oven. Make them around the thickness of an Australian 20c coin, American nickel or 1 Euro coin. I used long Sebago potatoes that ended up being around the same size when sliced.

Bread baking tip: Don't let the yeast touch salt as this may kill the yeast. I always dissolve my salt in water instead and this does the trick.

Can I use a sourdough starter instead of yeast? Yes! Sourdough starter is ideal for this slow rise focaccia as it can take longer than instant dried yeast to rise. Please use 50g/1.7ozs during summer and 100g/3.5ozs during winter (the dough needs a bit more of a boost during cooler weather).

Eat this focaccia: on the day that you bake it (ideally, shortly after it comes out of the oven, trust me!). Focaccia is best on the baking day but we've also eaten it over the next few days. It may lose that crunchy base but it will still be tasty. I keep it in an airtight container in the fridge.

I cannot tell you how utterly thrilled I was when I tried this focaccia. It was even better than I could have ever imagined! I gave some to Mr NQN and insisted that he try it warm and I could hear the crunch with his every bite.

Then I messaged Ivy and offered her some if she wanted to come by to pick it up. "I'm leaving in 5 mintues!" she said and I gave her some focaccia while it was still warm. She messaged me a short time later when she got home. 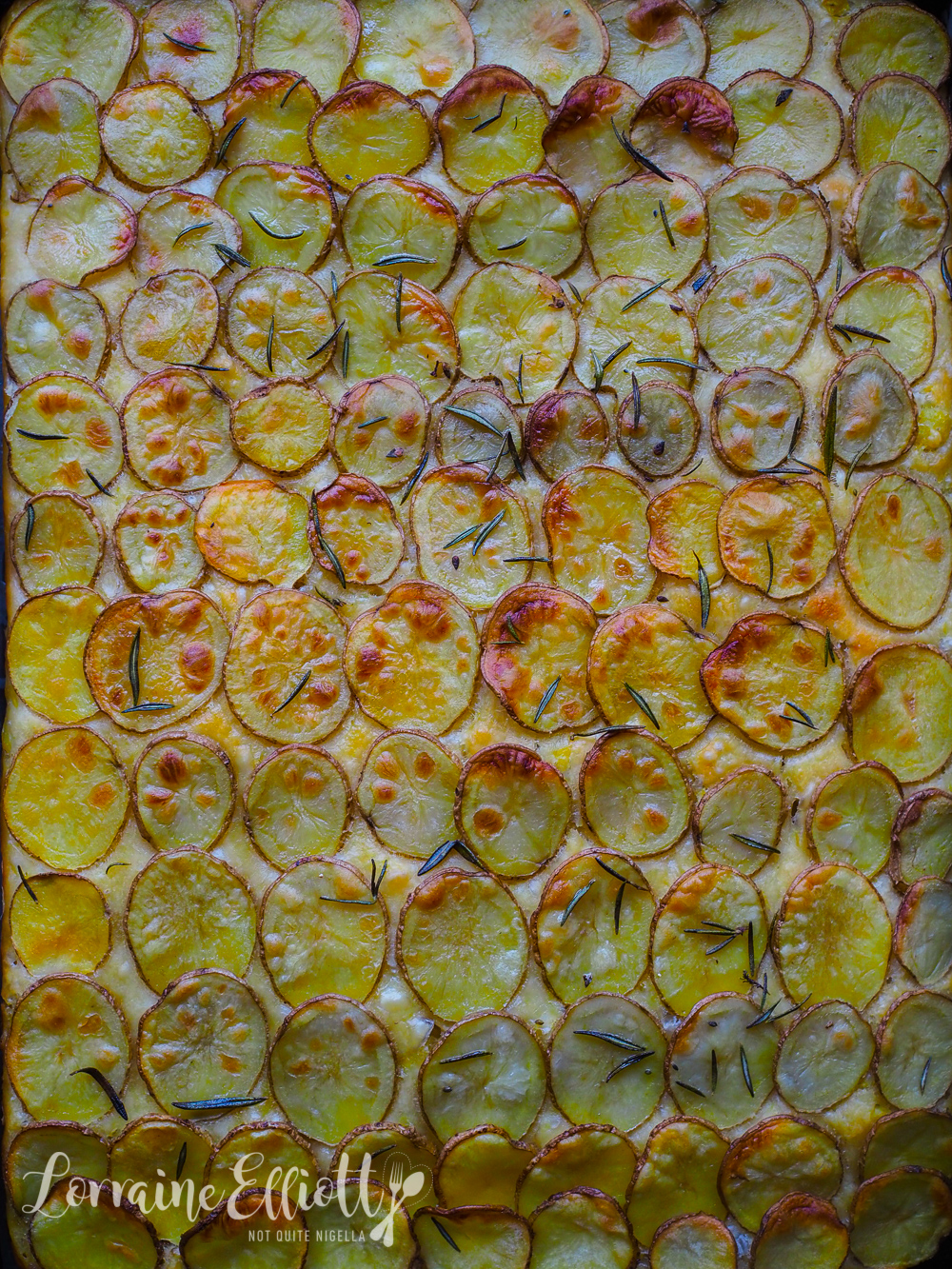 "This focaccia is straight up sorcery!" she said. "I can't imagine a better one, I have already eaten way too much". She then noted the chewy bottom, the spring back and the potato and chive top (please don't omit the chives, they really make it pop-think cheese and onion flavour even though there's no cheese!). The focaccia under the potatoes develops this cheesy sort of layer that's just a crazy delicious bonus.

I love giving away my food to people that will appreciate it. Ivy is one of those people. She and I talk every day by message especially during this whole Covid situation. During one of our marathon video calls after the guys had faded off in the background she and I were still talking while she was walking around her apartment. 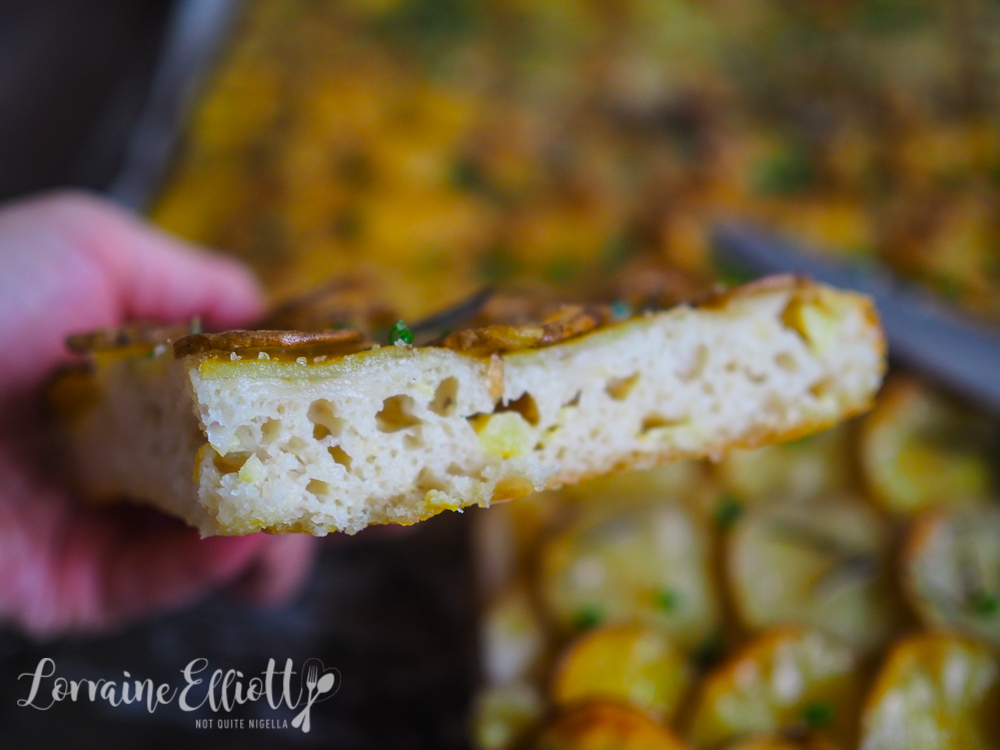 She made a cocktail while talking to me and then the scenery changed and she was suddenly in a different room. Without skipping a beat we continued our conversation and then it dawned on me.

"Did you just pee in front of me?" I asked her laughing.

"Yeah," she said laughing. I had to laugh because she is unpretentious and real and hey we are like kin. Hell I don't even want Mr NQN doing that in front of me! And I'll always keep some focaccia aside for people who appreciate it and show me their real selves.

So tell me Dear Reader, do you give food away to certain people because you know they'll appreciate it? Have you made focaccia before? 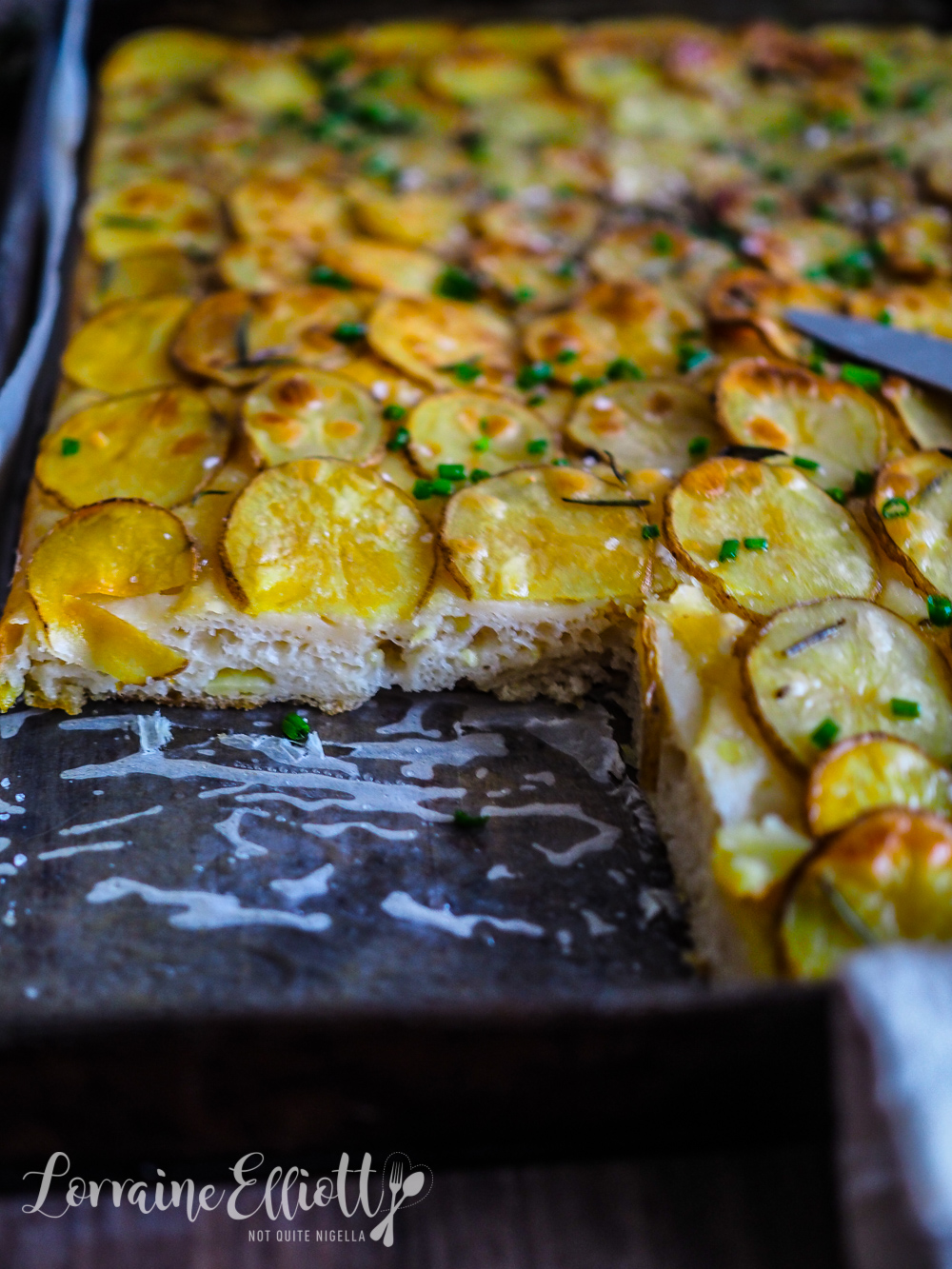 If you are using a sourdough starter, please use 50g/1.7ozs during summer and 100g/3.5ozs during winter 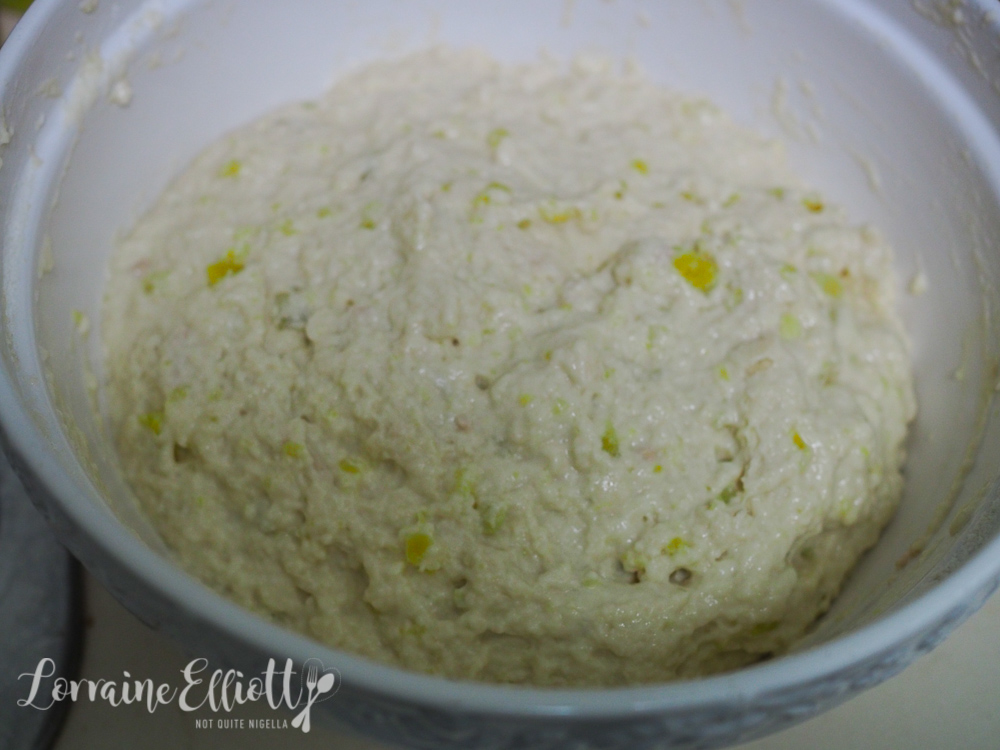 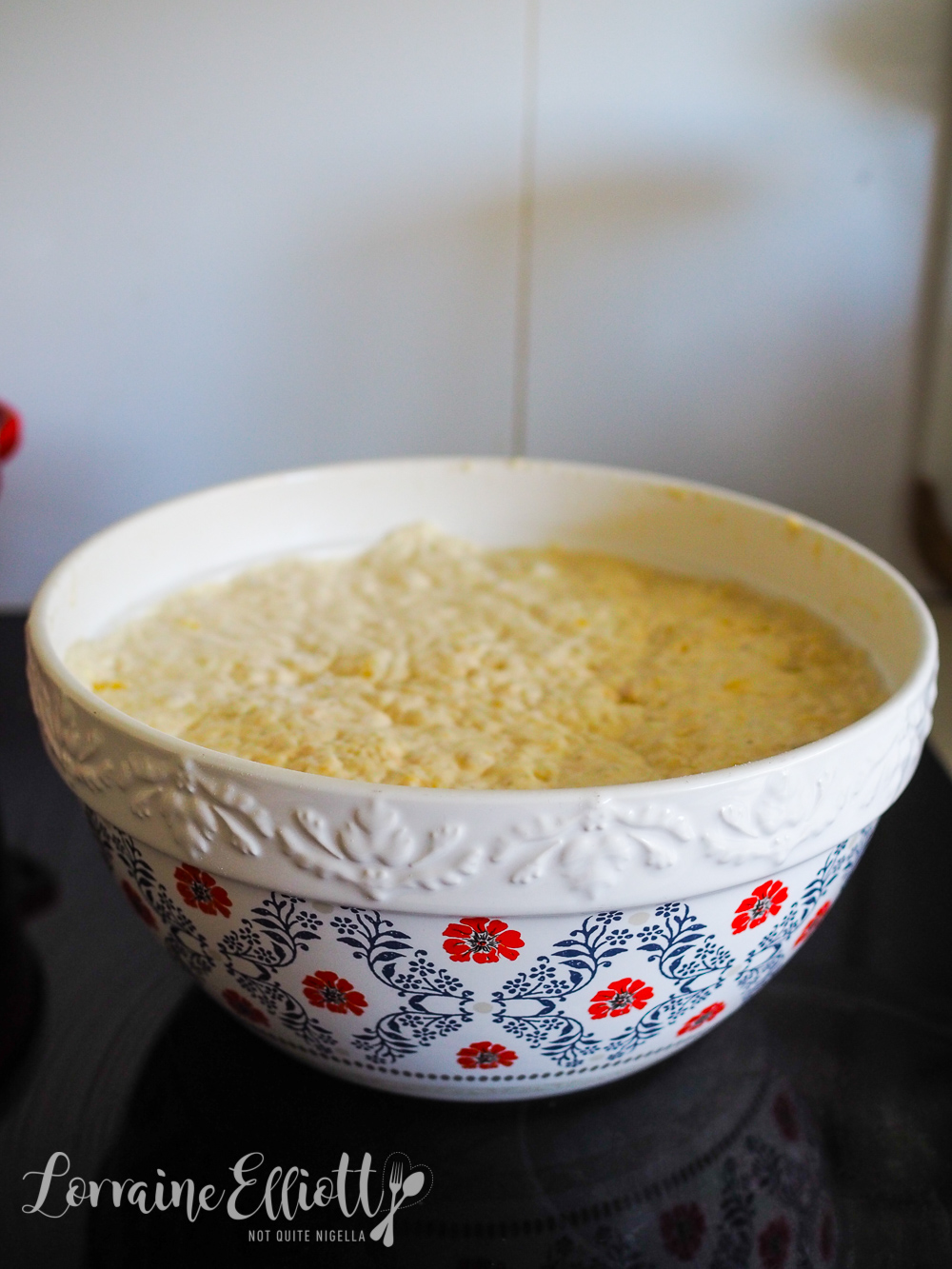 Step 1 - Dissolve the salt in the water in a very big bowl (I used the biggest bowl I had, you can also split this mixture in two bowls once the dough is made so that it can rise). Add the mashed potatoes and stir around and then add the flour and yeast. Stir until combined and then cover and rest at room temperature overnight for 12-18 hours. 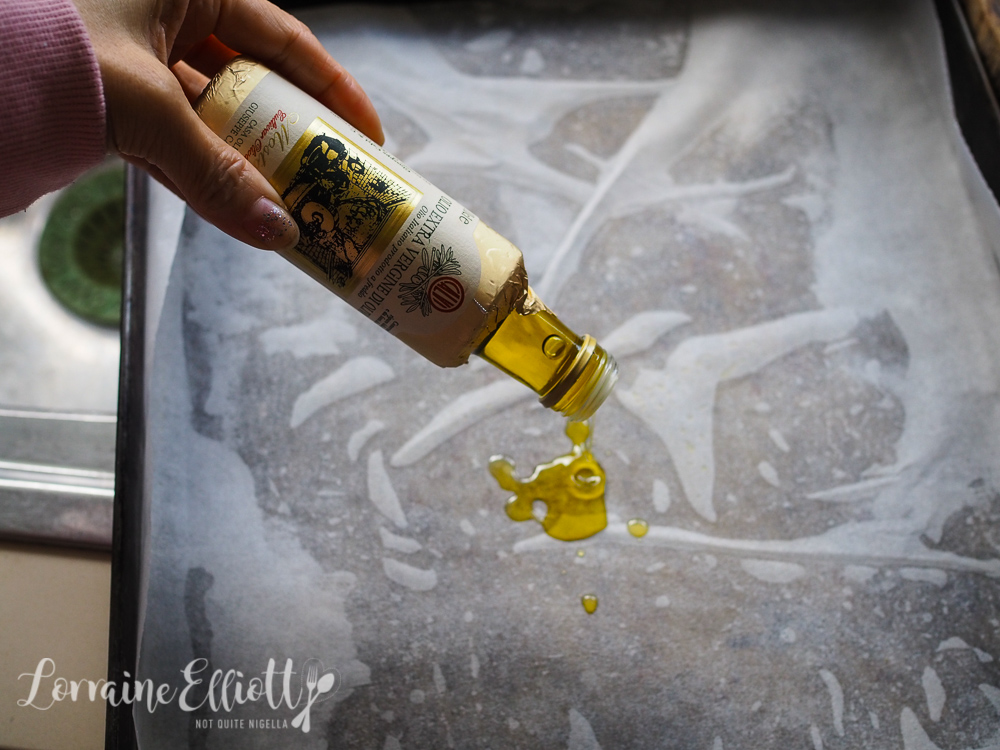 Step 2 - The next morning line a 40x30cm or 16x12inch one inch deep baking tray with parchment and brush with half of the olive oil. Stir the dough and then scoop into the prepared tin. Rest for 5 minutes and then spread it out to the edges with an oiled palette knife or silicon spatula and then brush with most of the remaining oil (leave some to brush on potatoes). Rest for 1 to 1.5 hours in a warm spot until it develops air bubbles. 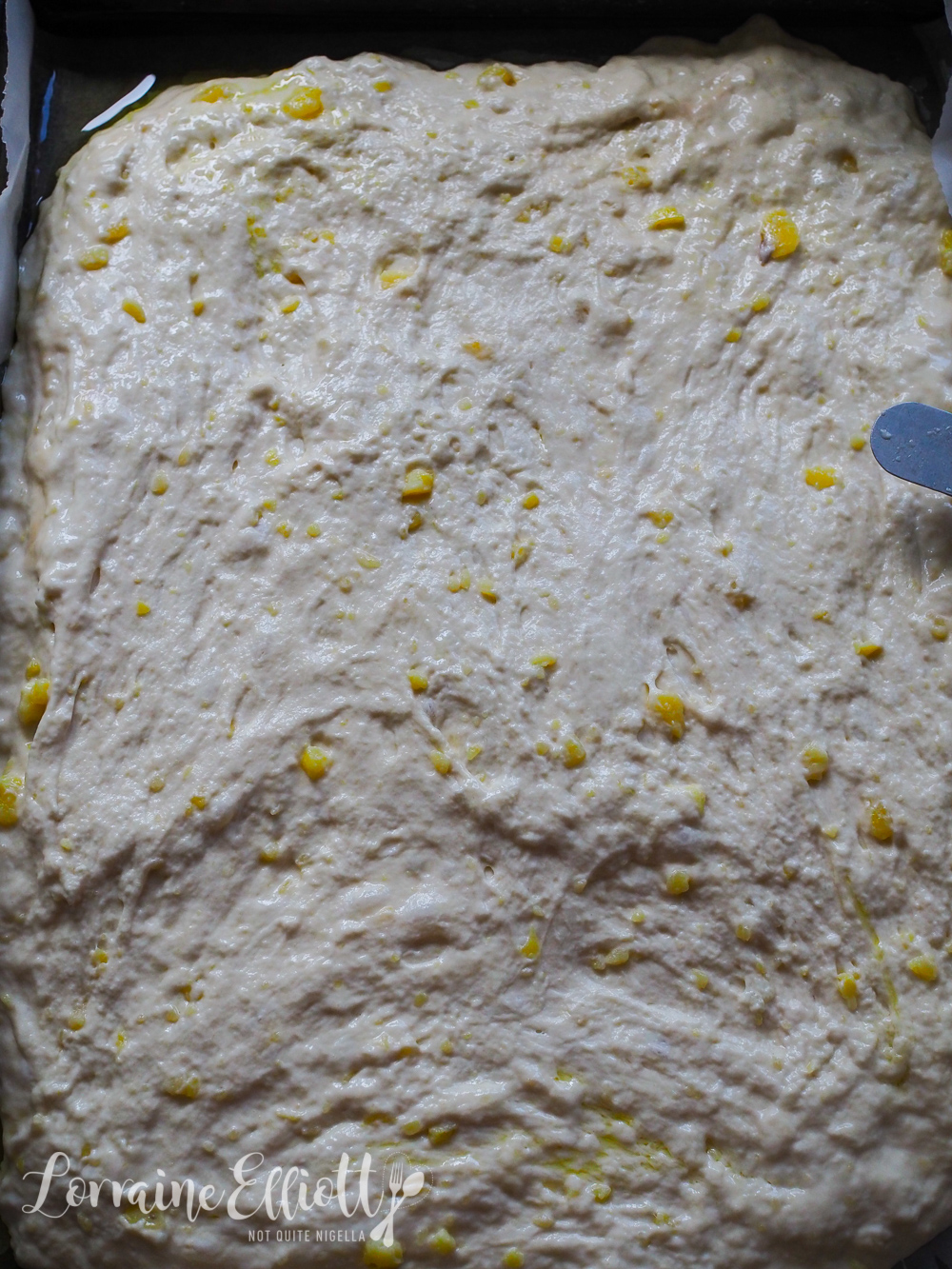 Spread out, before the second rise and prior to brushing oil 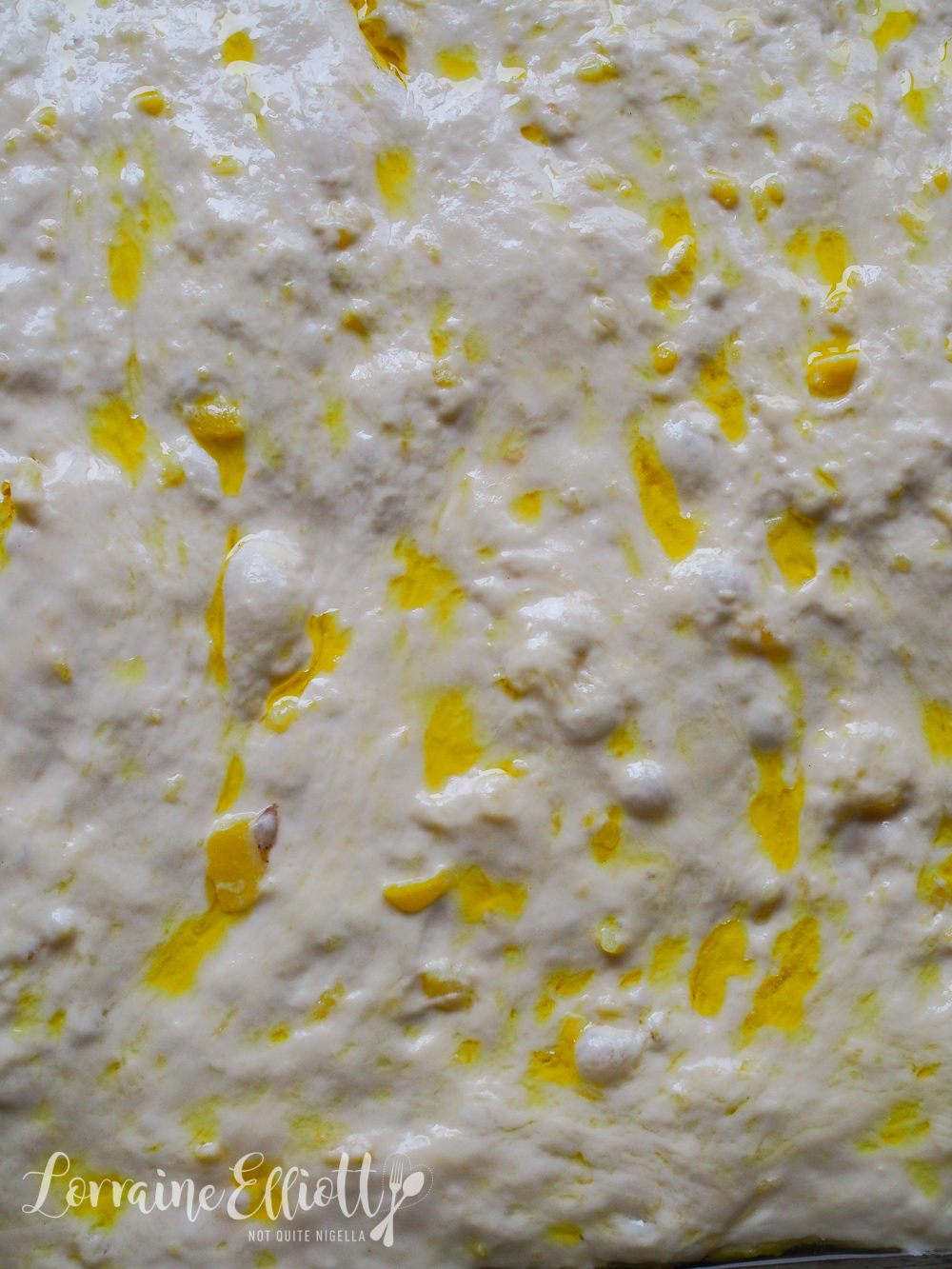 Step 3 - While it is resting slice the potatoes and preheat oven to 220C/440F. I used a mandolin and sliced them and positioned them in a semi OCD fashion. Brush the potatoes with the remaining oil. Scatter rosemary needles on top and then bake for 30 minutes or until potatoes are golden on top. Sprinkle some salt and the chives on top and serve warm. 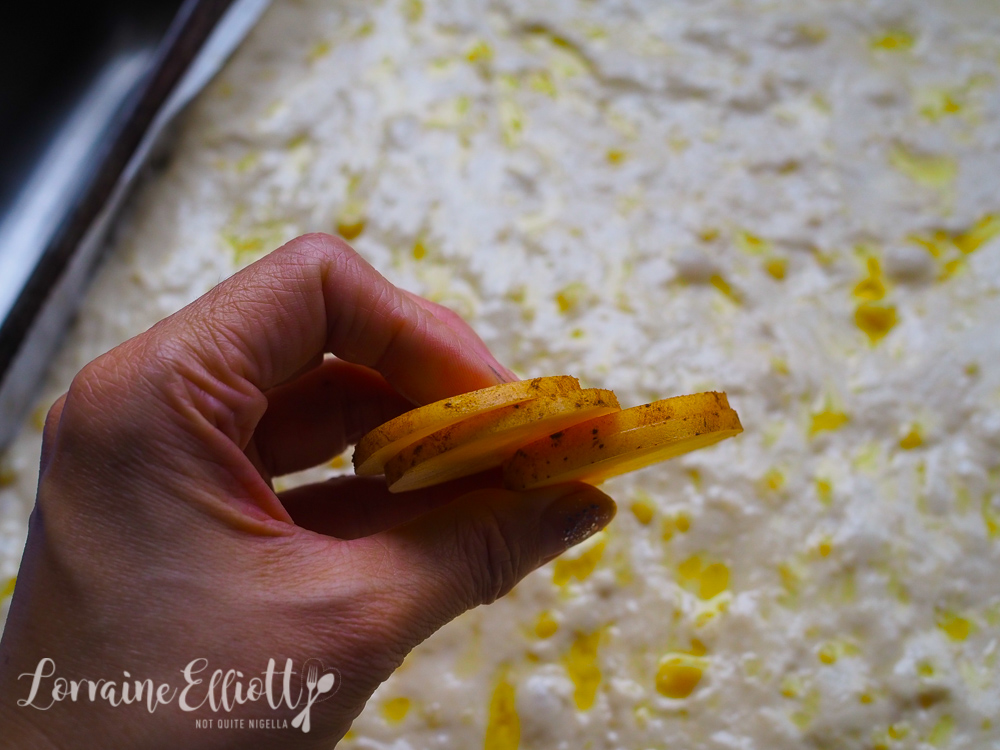 Don't slice the potatoes too thinly 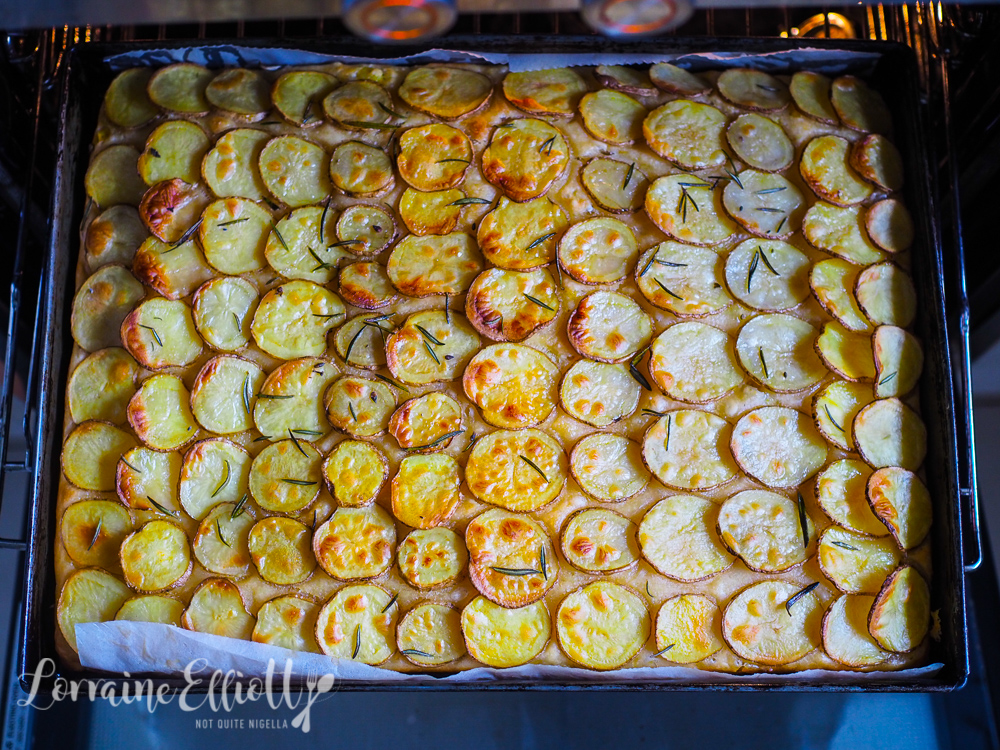