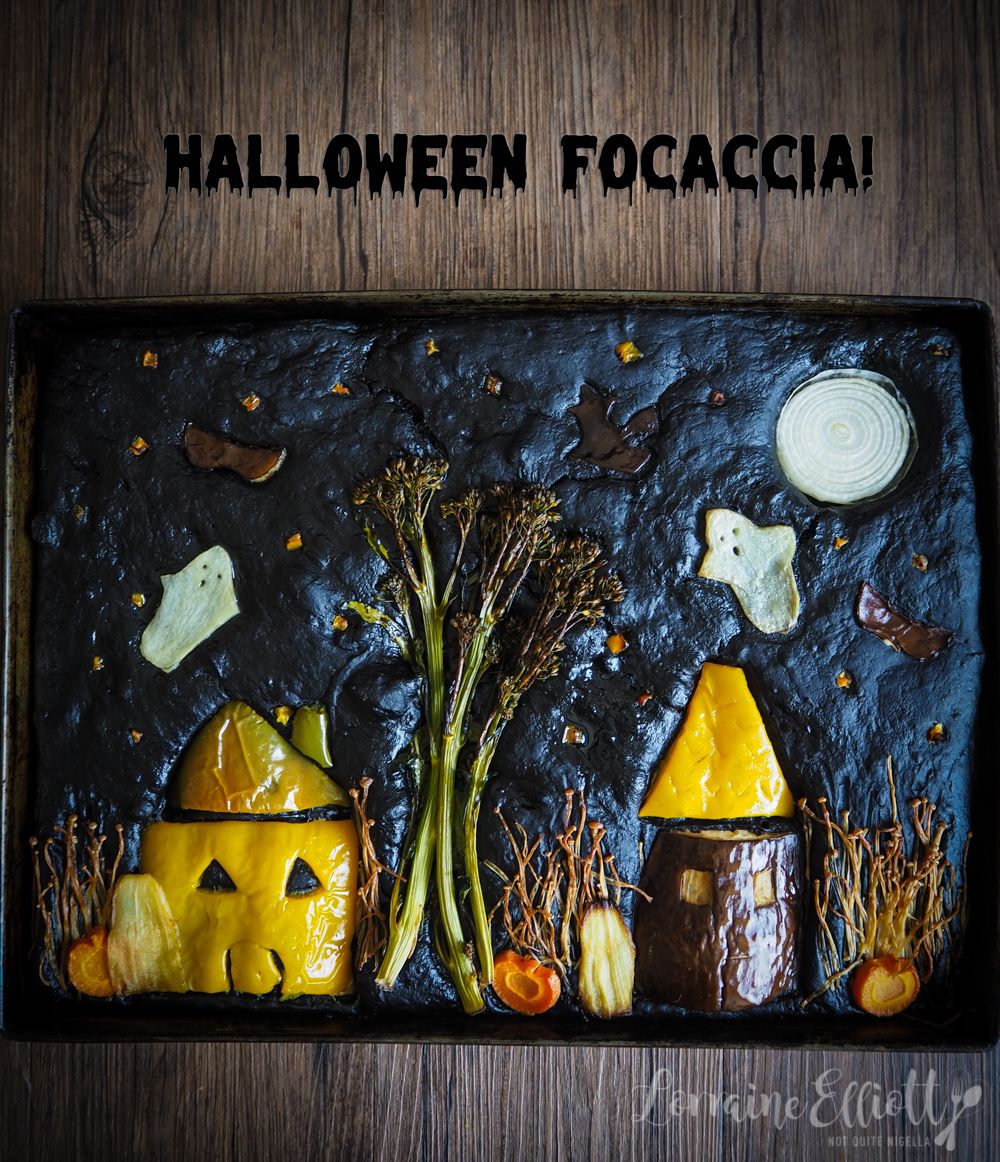 Want to set the scene for Halloween in the most delicious way? This Halloween Focaccia Haunted House scene is so easy and involves the most delicious no knead focaccia recipe! Let your imagination run wild and create your own customisable Halloween scene that is as delicious as it is adorable without breaking a sweat. I promise that this focaccia is so delicious and worth making and this is a pushy recipe if you're celebrating Halloween Dear Reader! 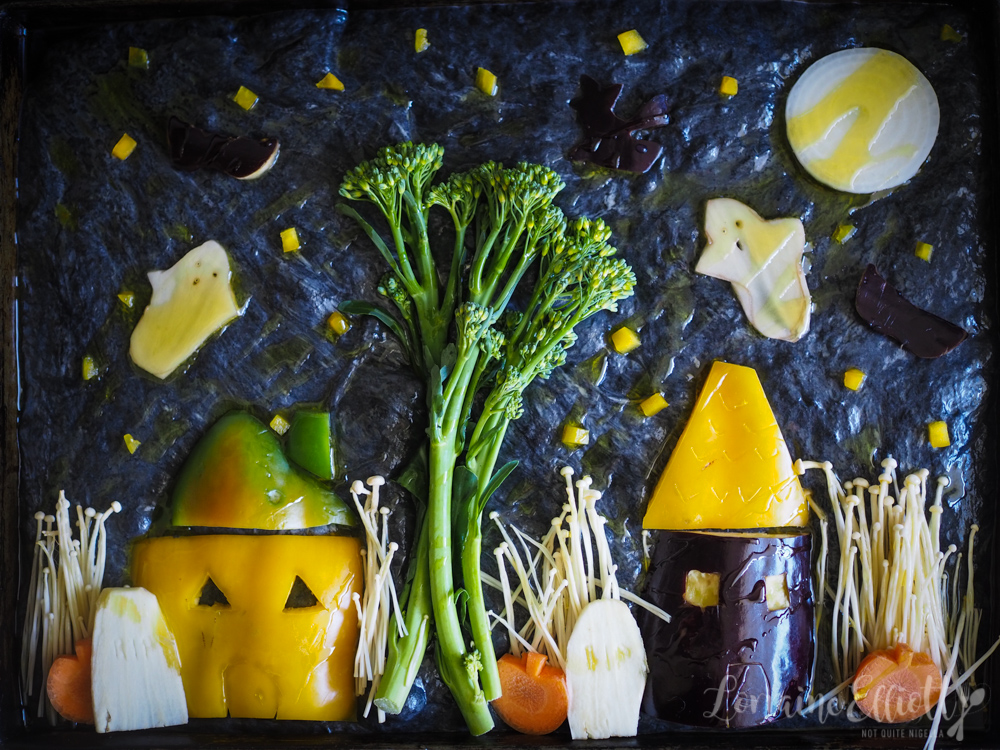 If COVID has taught us anything it's how easy Focaccia and bread making can be. This no knead focaccia dough is so delicious and I was so chuffed at how it turned out. I wanted to create a Halloween Haunted House scene and I always lay out my design before I place it on the focaccia as it helps me design it all. Once you place things on the focaccia dough it is very sticky and can be difficult to extract. I started with haunted houses and then built a creepy Halloween style scene around that. You can take elements of this and make it full of ghosts or broccolini makes great creepy trees. I think that people are pleasantly surprised is how easy it is to decorate a focaccia and how tasty the result is.

All this Halloween bread needs is two tablespoons of activated charcoal powder to colour it a deep, inky black. The charcoal adds no flavour at all and is harmless (some even say that it helps to rid the body of toxins). It's easy to find at health food stores. 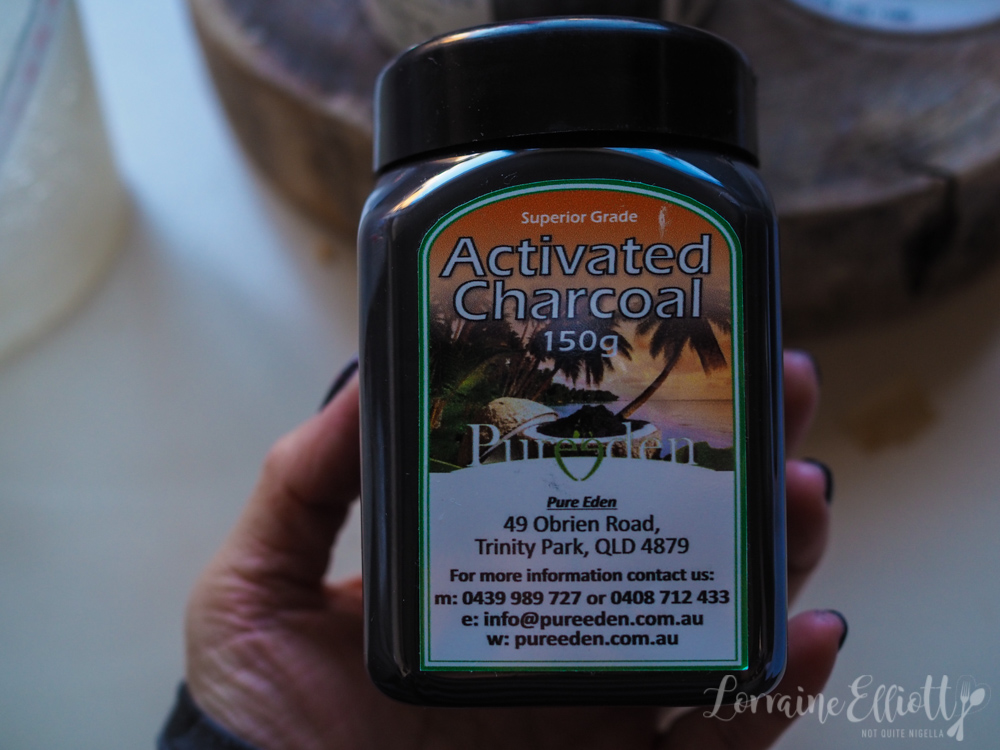 A note on flour for focaccia: I used a Provenance Lancer Flour which is a high protein single origin flour and I think that made a big difference in the overall rise and puffiness of the focaccia. If this is hard to source any high protein bread flour can be used and it's marked as such on the packet. High protein flour allows for a better structure and height to your bread as the protein strands provide structure. This makes a big difference in the result of your focaccia and I really urge you to try and find this flour. I bought it from my Vegebox and it was $10 for 2 kilos.

I started this focaccia on a Thursday night and made it on Saturday morning just in time for my Halloween party. It was one of the biggest hits as it was soft and pillowy and delicious on its own. It is also a focaccia design that looks both good unbaked and baked. My friend JY who was at the party loved it so much she took some home with her and she loved how puffy and soft it was. Valentina's husband Pete did think that it was burnt (LOL really). 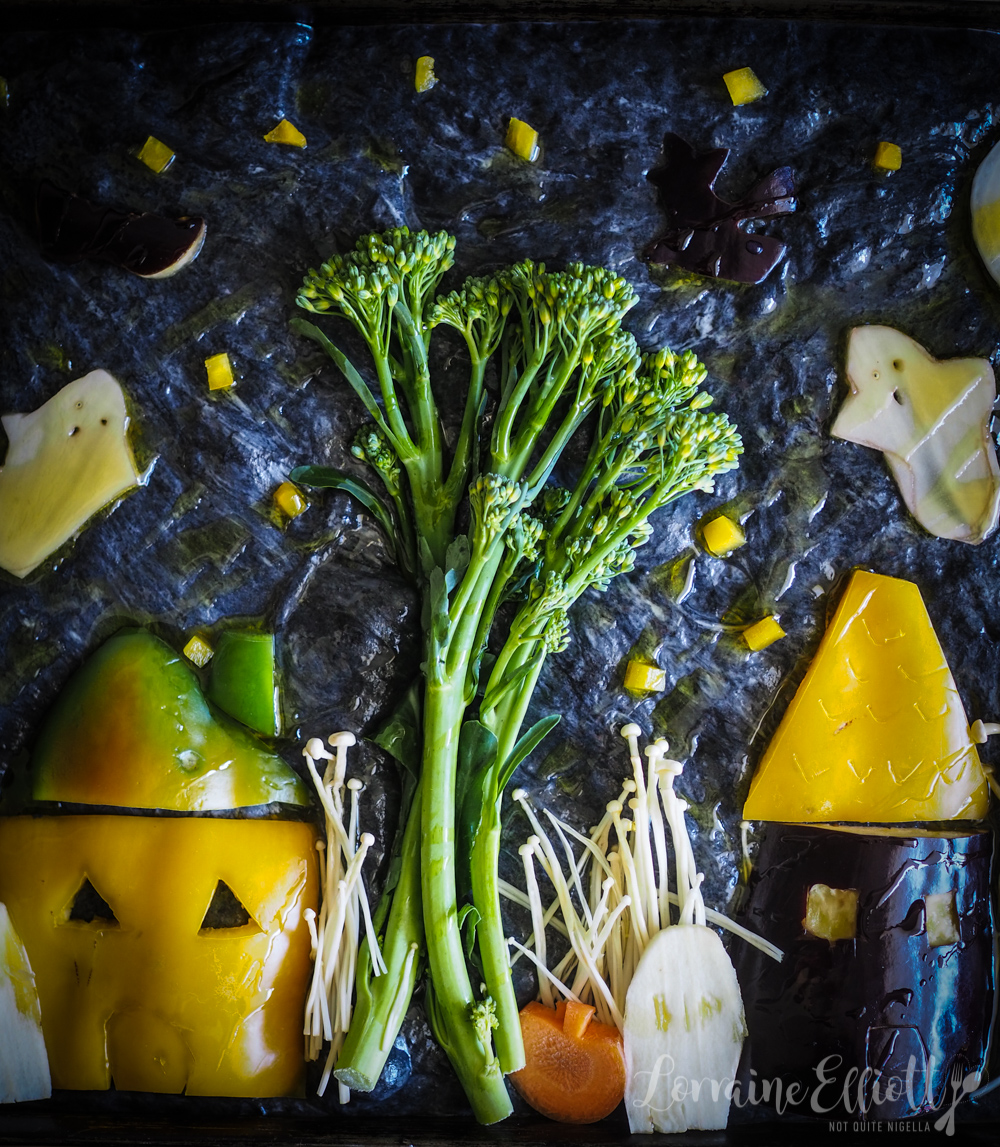 I've also got my recap of my Halloween party coming up which I hold a week early so that I can get the chance to share the recipes with you so that you can make them. This past Saturday I was busy prepping my food although my costume was ready. I left Mr NQN to do his costume as he actually loves dressing up for Halloween. When he first met me he hated the whole idea of dressing up but then he realised that it could be a talking point at the party and as someone that is very shy that was a good thing to have up your sleeve so to speak.

This year Mr NQN came to Halloween as John Wick. We had watched all of the John Wick movies this year (finally) and while we both don't usually like action movies we both loved them. It was hard for Mr NQN to top last year's Halloween costume (where he came as Danny Larusso from The Karate Kid who went to a Halloween party as a shower. He decided that since he hadn't had a haircut in almost a year and his hair was looking very Keanu and John Wick-like that it was a natural choice. 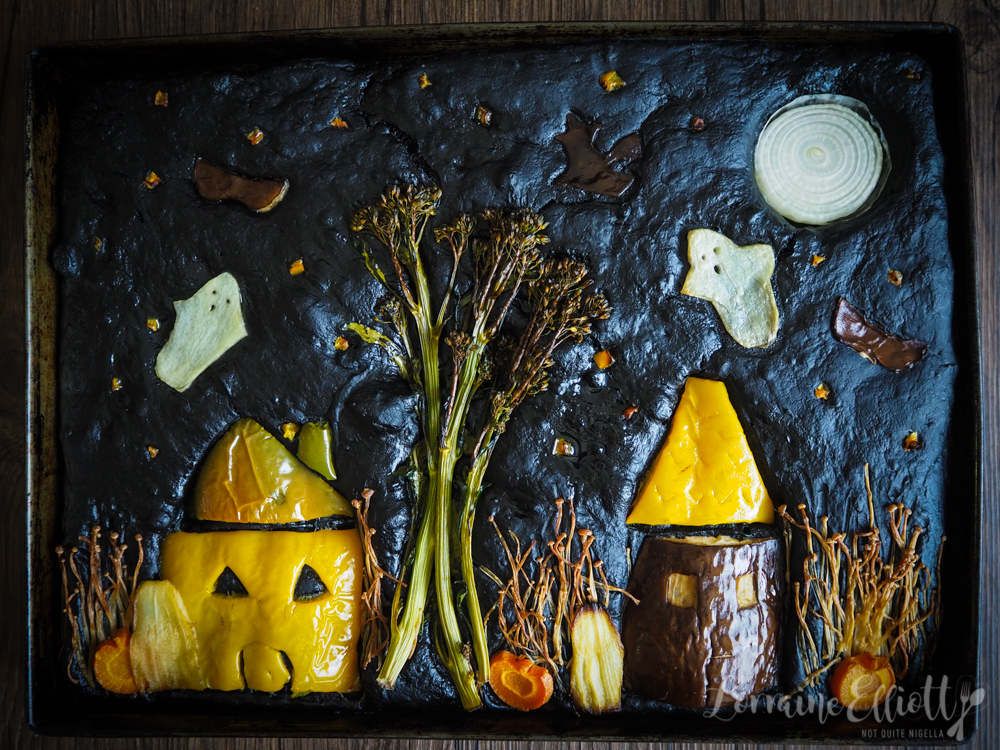 "Teddy will be the perfect accessory!" he said excitedly as a dog features in the film. Albeit John's dog was not a tiny, fluffy metrosexual poodle with a pom pom haircut but you've got to work with what you've got.

Just before we left for the party location I asked him, "Do you have blood makeup and all of that sorted?" I asked him. "Yup!" he said from the bathroom. I figured he had found my fake blood makeup stash and was busy applying that on his face. But when I went into the bathroom to apply my makeup I saw him standing there with a ball point pen in one hand and a red felt tip pen in another. He was drawing on his face with actual pen!

"Honey I have make up for that," I told him wondering if pen was hard to get out. At the very least it would hurt drawing on your face with a ball point pen over a make up brush. But Mr NQN was undeterred. "I think I'm doing a great job, see?" he said. And he did in fact simulate cuts and bruises quite well so now he thinks that he may have a career in movie makeup. 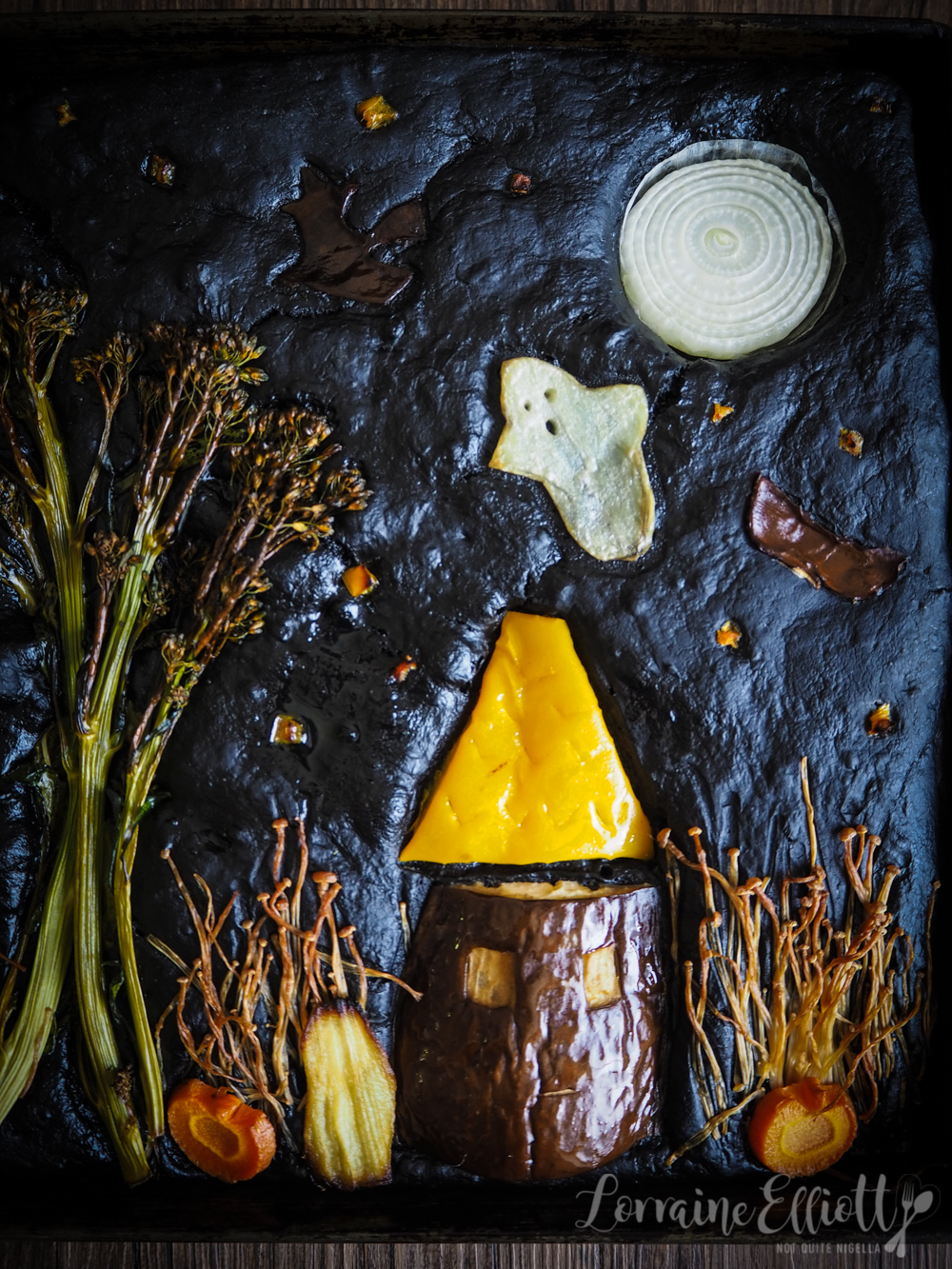 At the end of the night I asked him if he needed some product to take it off and he declined my offer. "I'm going to keep it on," he said. He liked that it made him look a bit tough and roughed up!

So tell me Dear Reader, do you like getting dressed up in costumes? Have you made focaccia? 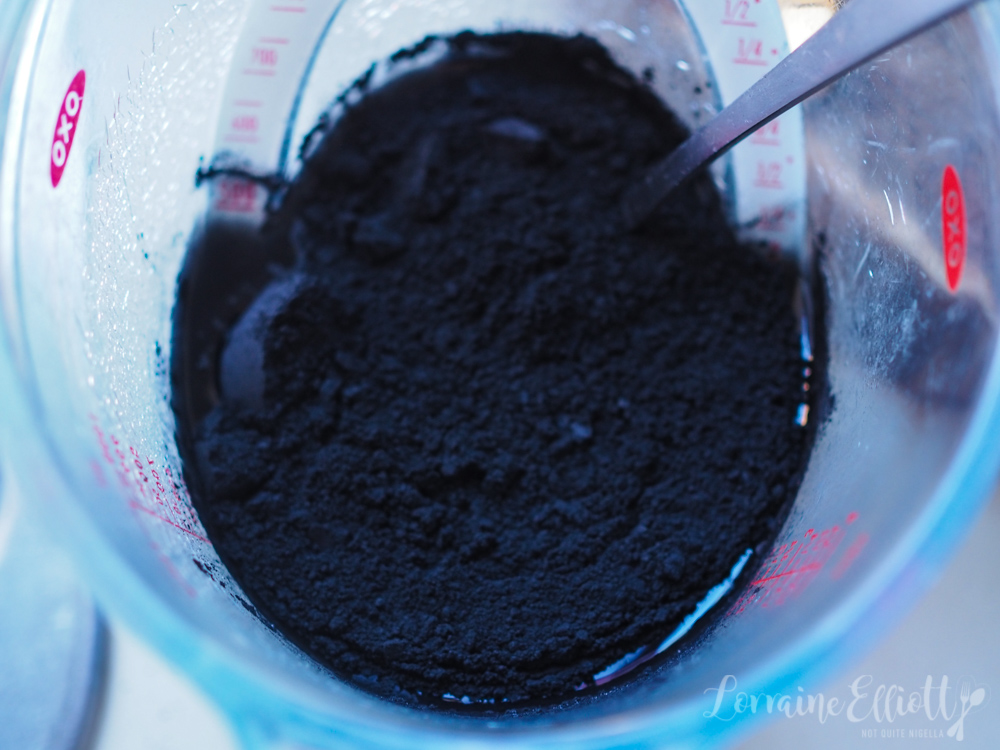 Step 1 - First make the focaccia dough which will rise in the fridge overnight. Mix the water with the activated charcoal powder and salt and stir to dissolve. In a large bowl (the largest that you have or split over two bowls) mix the flour and yeast. Add the black water to the flour and stir to combine well. Cover and allow to rise in your fridge overnight, for up to 3 nights. 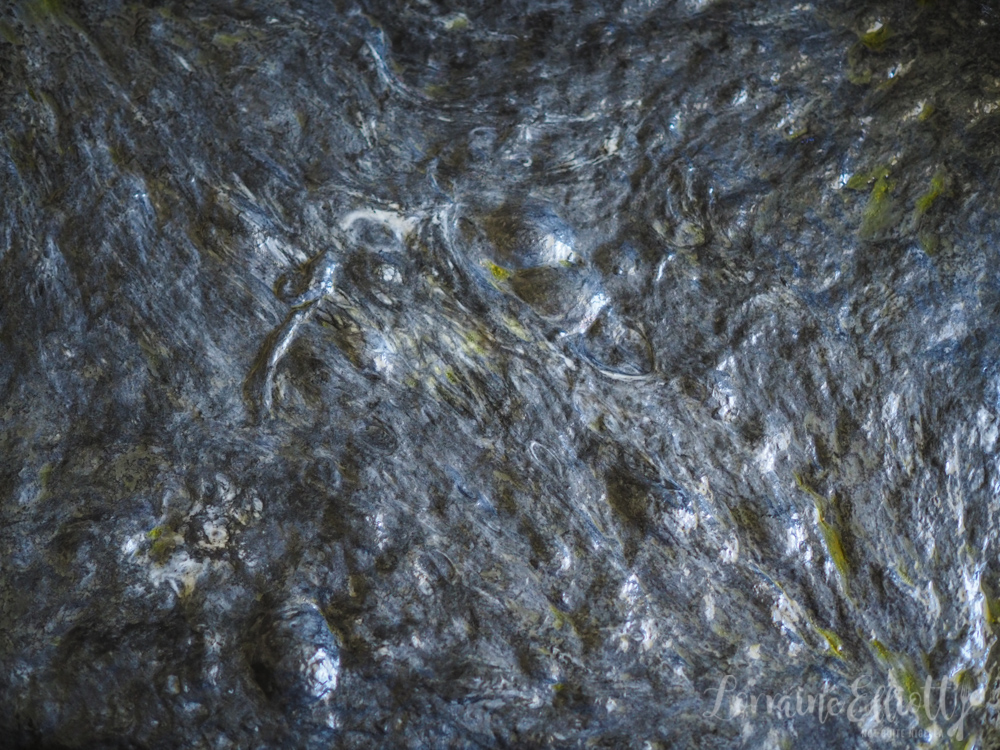 Step 2 - Take the bowl out of the fridge and spread 75ml/3.5flozs of the oil into a large 30x40cm or 12x16inch tray with at least 1.5 inch height as the focaccia will rise. Spread out the dough-it will be very wet. If it doesn't spread let it come to temperature a bit and wait and then spread out to the edge of the tray. Cover and allow to rise until puffy for about 1-1.5 hours (it needs a bit more time as it is coming out of the fridge). Don't worry if it looks grey, once baked it will be inky black. 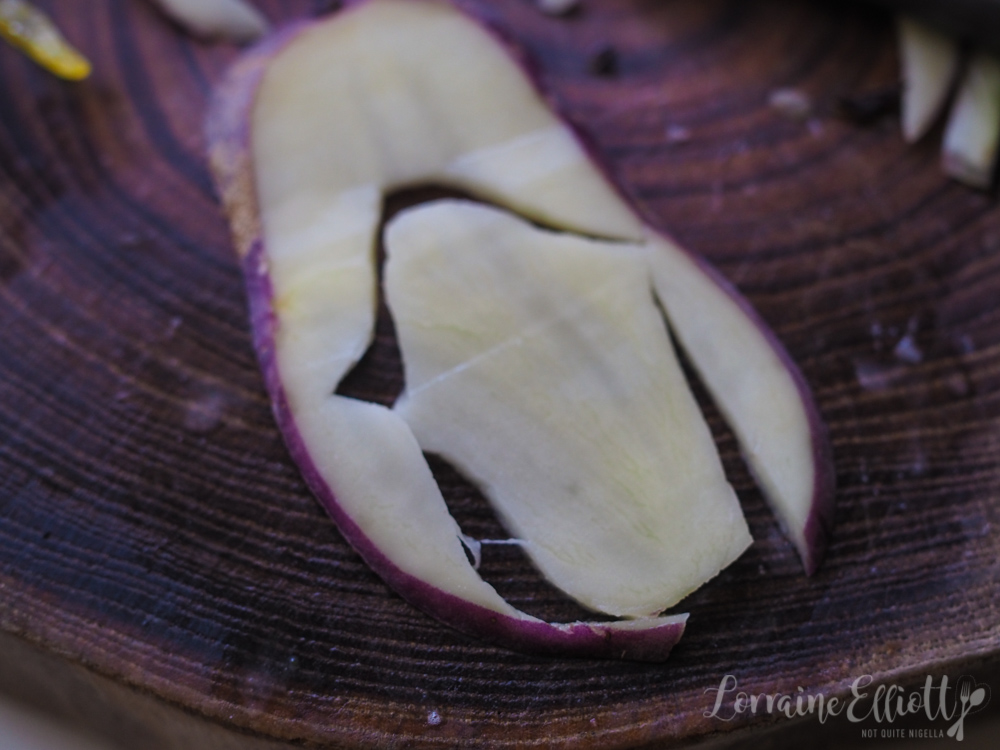 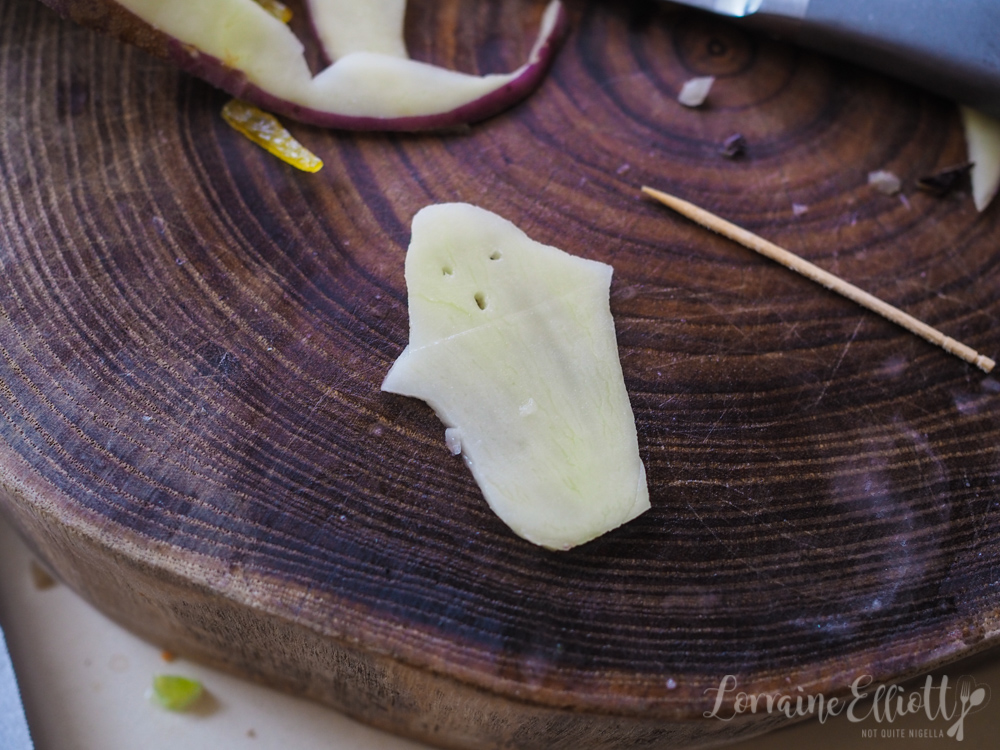 Step 3 - Meanwhile I always lay out my design on another tray lined just so I have the scene set the way that I want it. Place the onion in the corner and cut a house, roof and chimney out of capsicum. I made little pumpkins out of the carrot discs. I used some Halloween cutters on the black eggplant skin to make bats and a witch flying on a broomstick. I also carved out little tombstones and wrote RIP on them and made little ghosts out of thinly sliced potato using a small paring knife. I simulated stars by using the yellow capsicum. 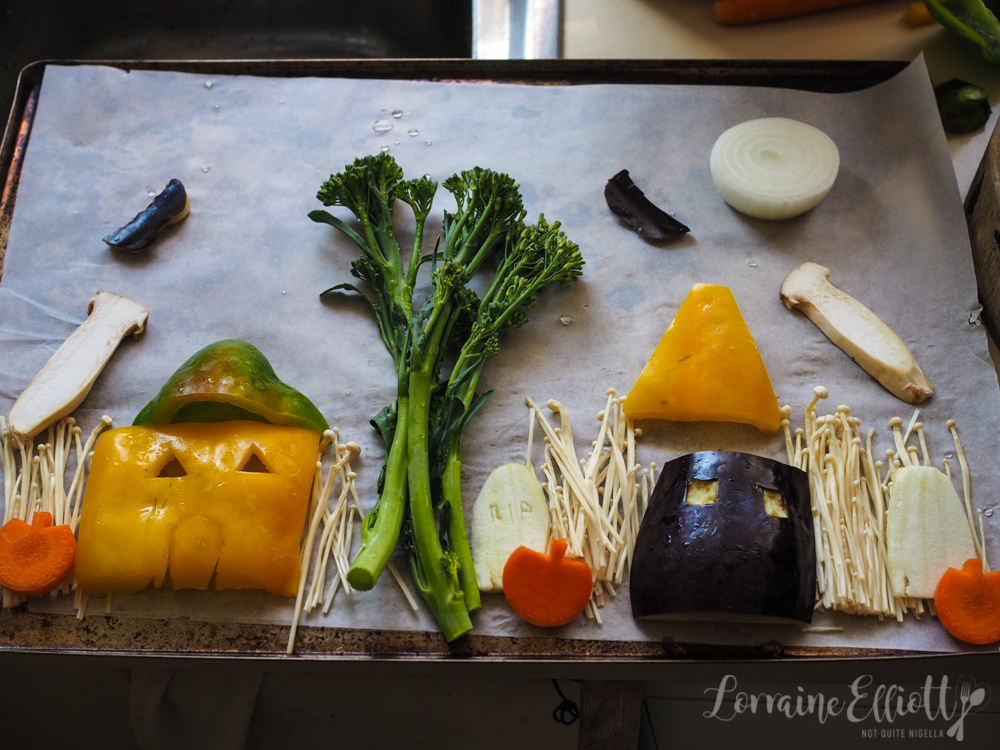 Step 4 - Preheat oven to 180C/350F. Once the dough has risen place your scene over the risen dough and drizzle with the remaining olive oil and extra salt. Bake for 30 minutes and serve warm. 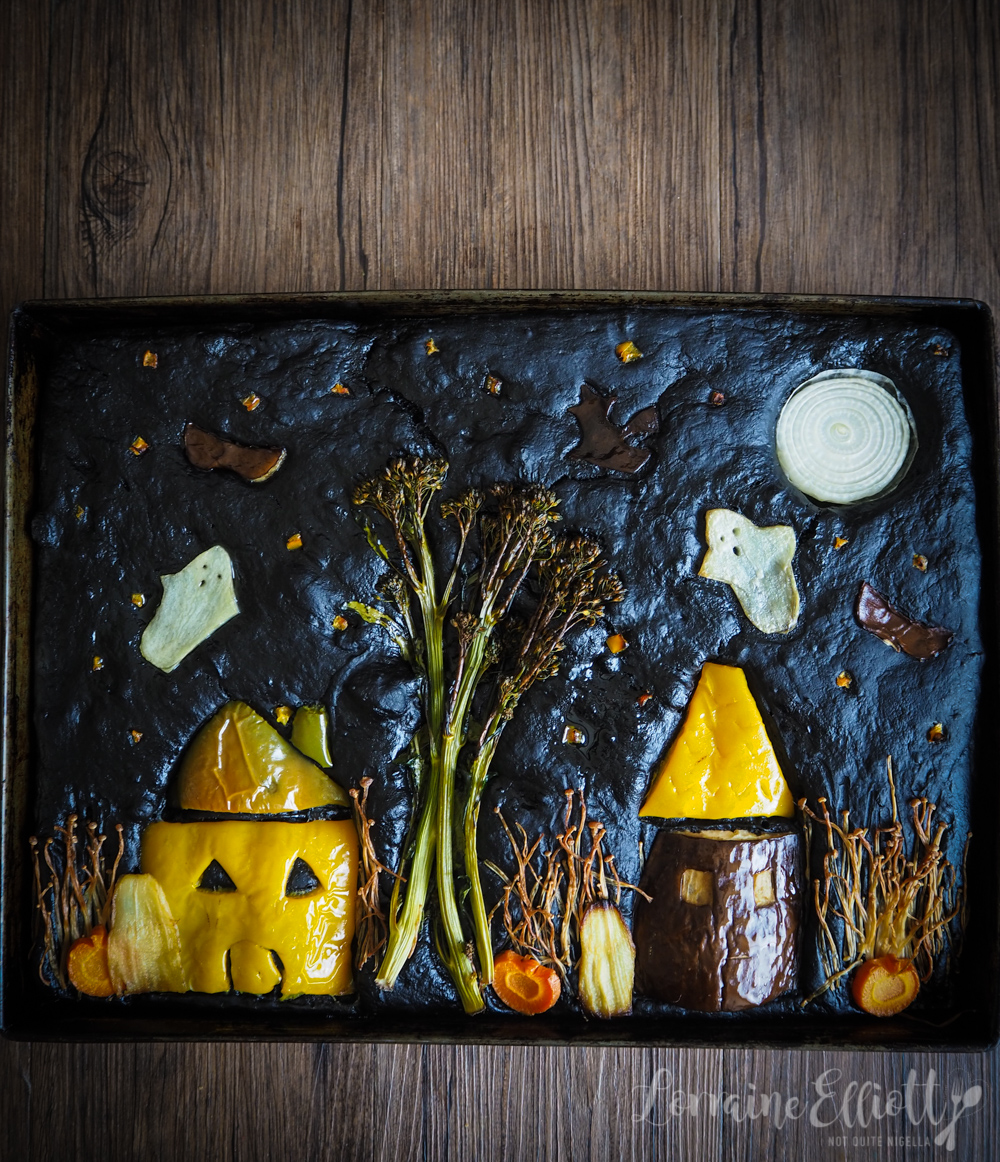