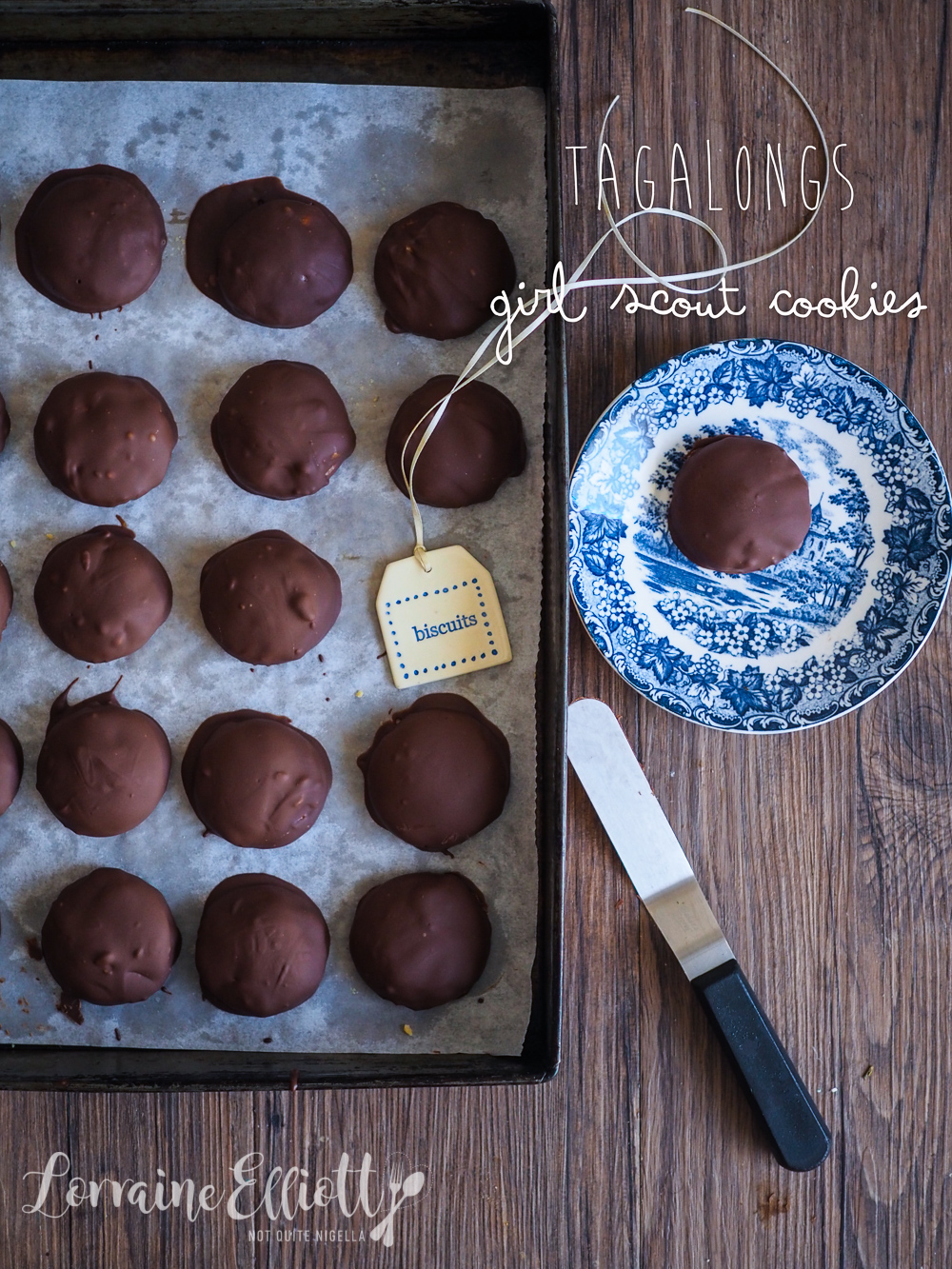 Love the combination of peanut butter and chocolate? Or are you curious to try another type of Girl Scout Cookie? Try these Tagalongs with chocolate, peanut butter and shortbread! These are a pushy recipe Dear Reader because they're THAT moreish!

Tagalongs are a Girl Scout Cookie used for fundraising. A tagalong has a vanilla cookie base, peanut butter filling and a chocolate coating. They're also one of the easiest Girl Scout Cookies to make and taste SO much better than the real thing! The secret to this very moreish version of Tagalongs is the mix of crunchy and smooth peanut butter. 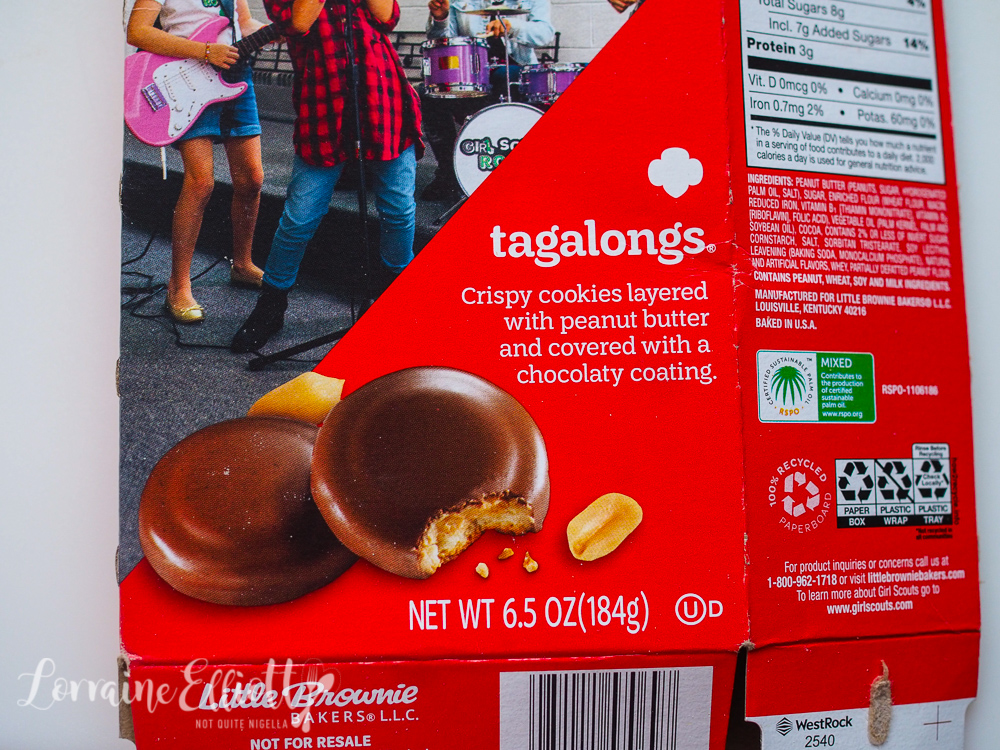 A Tagalong uses Peter Pan brand peanut butter and a chocolatey coating. They're made by two companies: Little Brownie Bakers and ABC Bakers (the latter call Peanut Butter Patties). The thing I was struck with when I first tried a tagalong was how much better it would be with proper chocolate but the idea of the tagalong is simple but delicious. 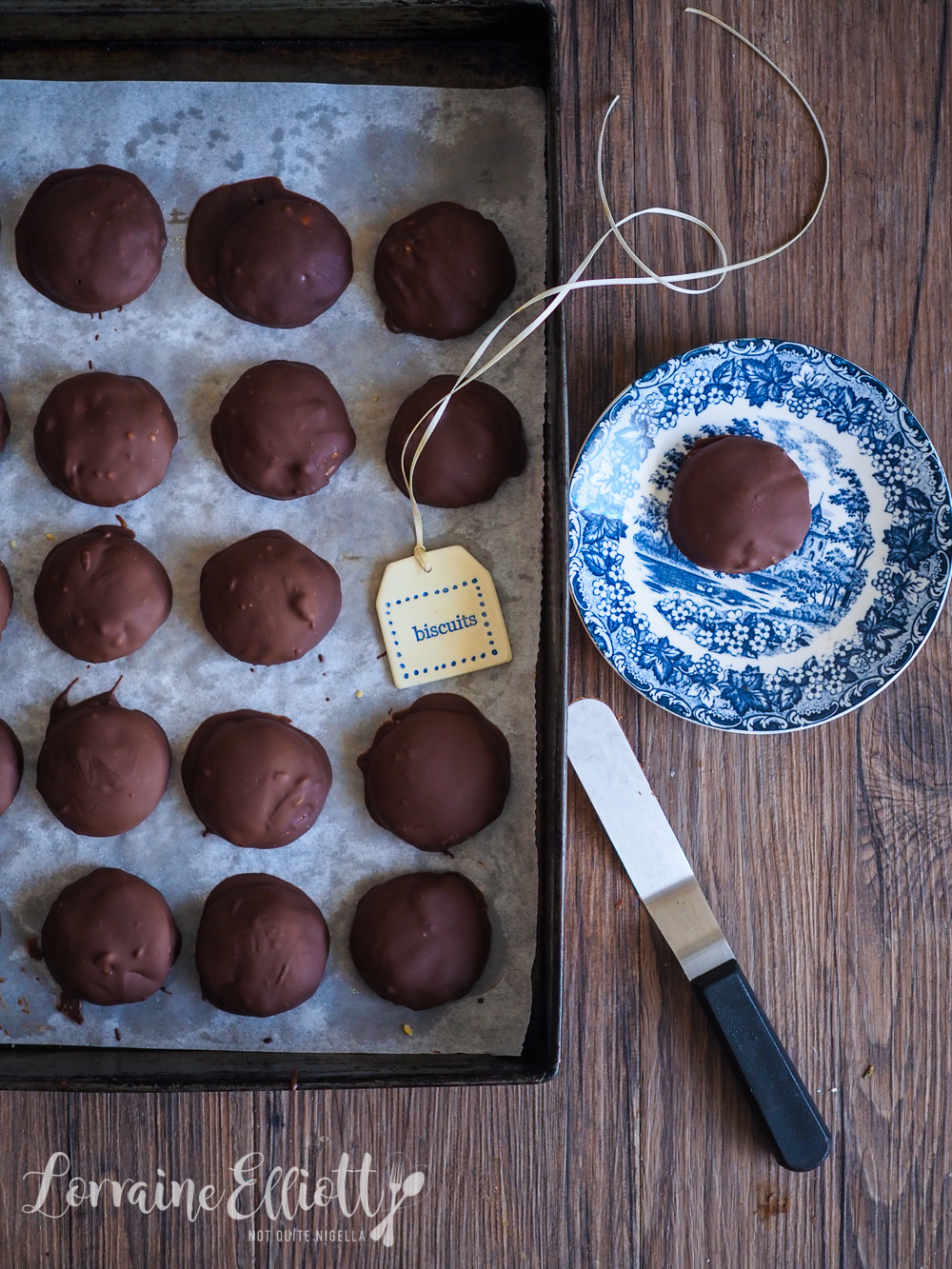 Milk or dark chocolate? Milk chocolate will obviously be sweeter and the result is like a Reese's Peanut Butter Cup. Dark chocolate is a good choice if you don't like your cookies as sweet. 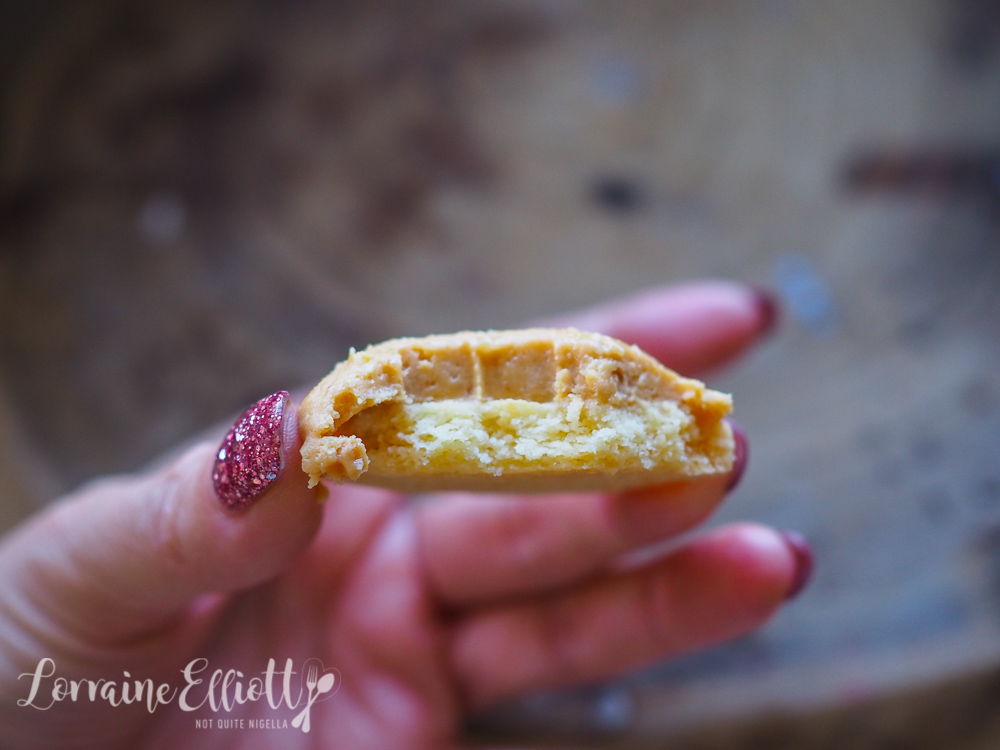 My version of the Tagalong cookie has a fatter section of peanut butter because I love peanut butter so much and I think it tastes better with more peanut butter. If you want to make them thinner and more like the real thing, halve the quantity of filling and make the peanut butter layer half the thickness of the one above. Mine was about as thick as the cookie itself. 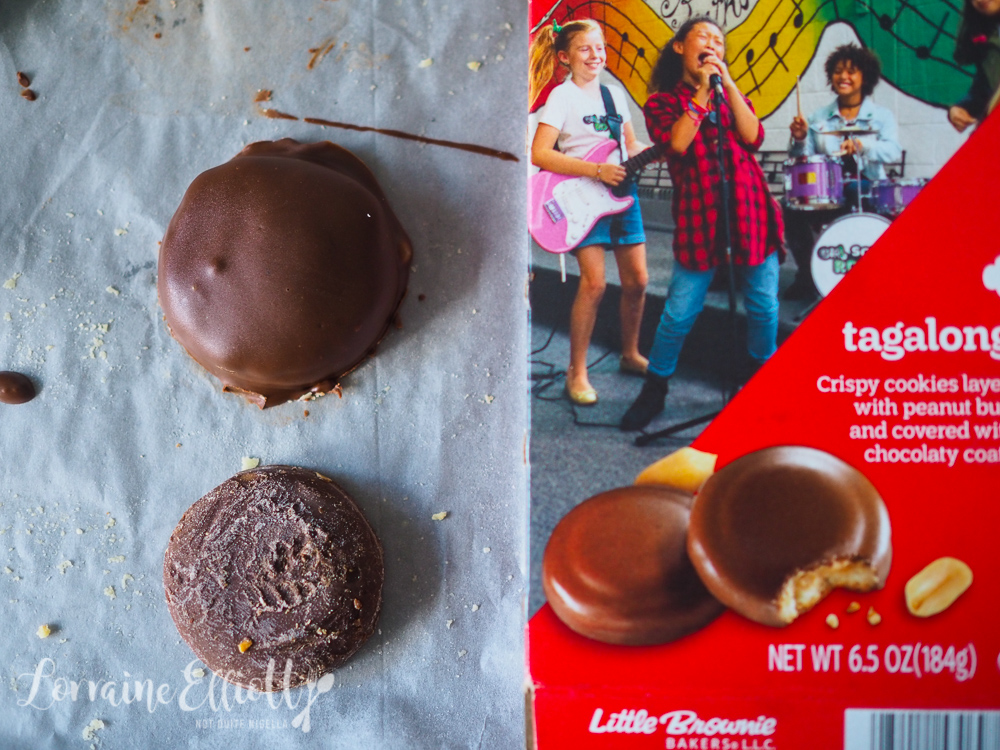 My tagalongs were also a bit larger (on top, real tagalongs bottom left)

Coconut oil: I add some coconut oil to make the chocolate easier to dip in and a bit smoother. If you don't want to use coconut oil you can use oil instead (you can use any kind except for flavoured oils like sesame oil).

Shrinkage: These shortbreads don't expand very much so there's no need to sit them too far apart but they may spread a few millimetres.

Allergic to peanuts? You can definitely replace peanut butter with other nut butters or sunflower seed butter.

Thermomix version: these are really simple to make using a Thermomix. Here's a link to the Thermomix recipe for Tagalongs! 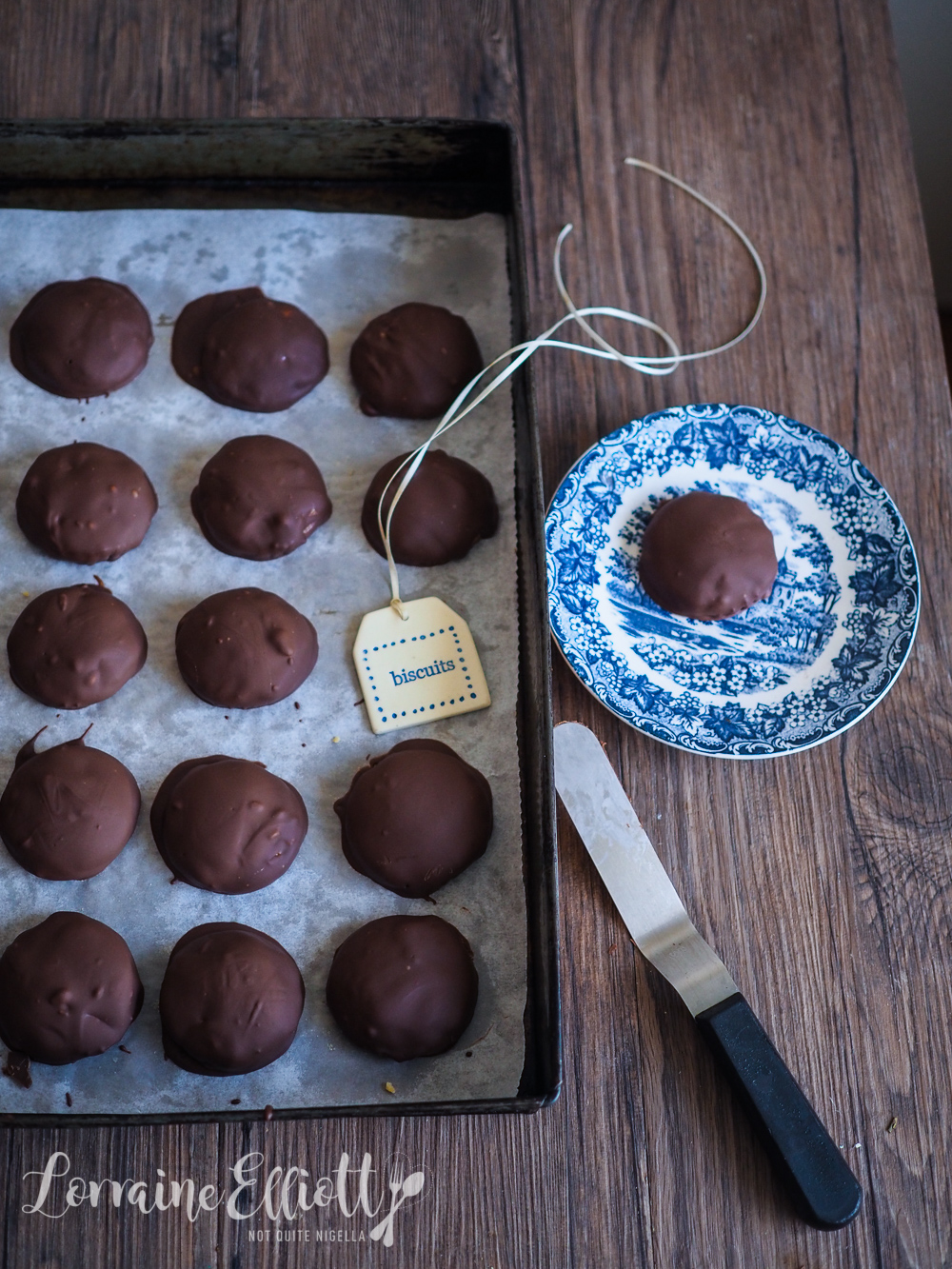 The peanut butter and chocolate combination is a classic favourite. I gave some to Laura who took them to her boyfriend's house to share with him but them promptly took them home so that she could eat them by herself. "I thought he won't miss what he won't know." she said. She's a sharer like me, but sometimes we will come across something that is highly addictive that we don't want to share. It's rare but it does happen.

Ivy loved them too saying that she hated me for starting an addiction to them. I loved them so much that I gave them away because I couldn't stop eating them. So I guess what I'm trying to say Dear Reader is to make these, but also be prepared to start an addiction that you can't quit!

So tell me Dear Reader, do you like the chocolate and peanut butter combination? Have you ever meant to share something with someone only to take it back because you like it so much? 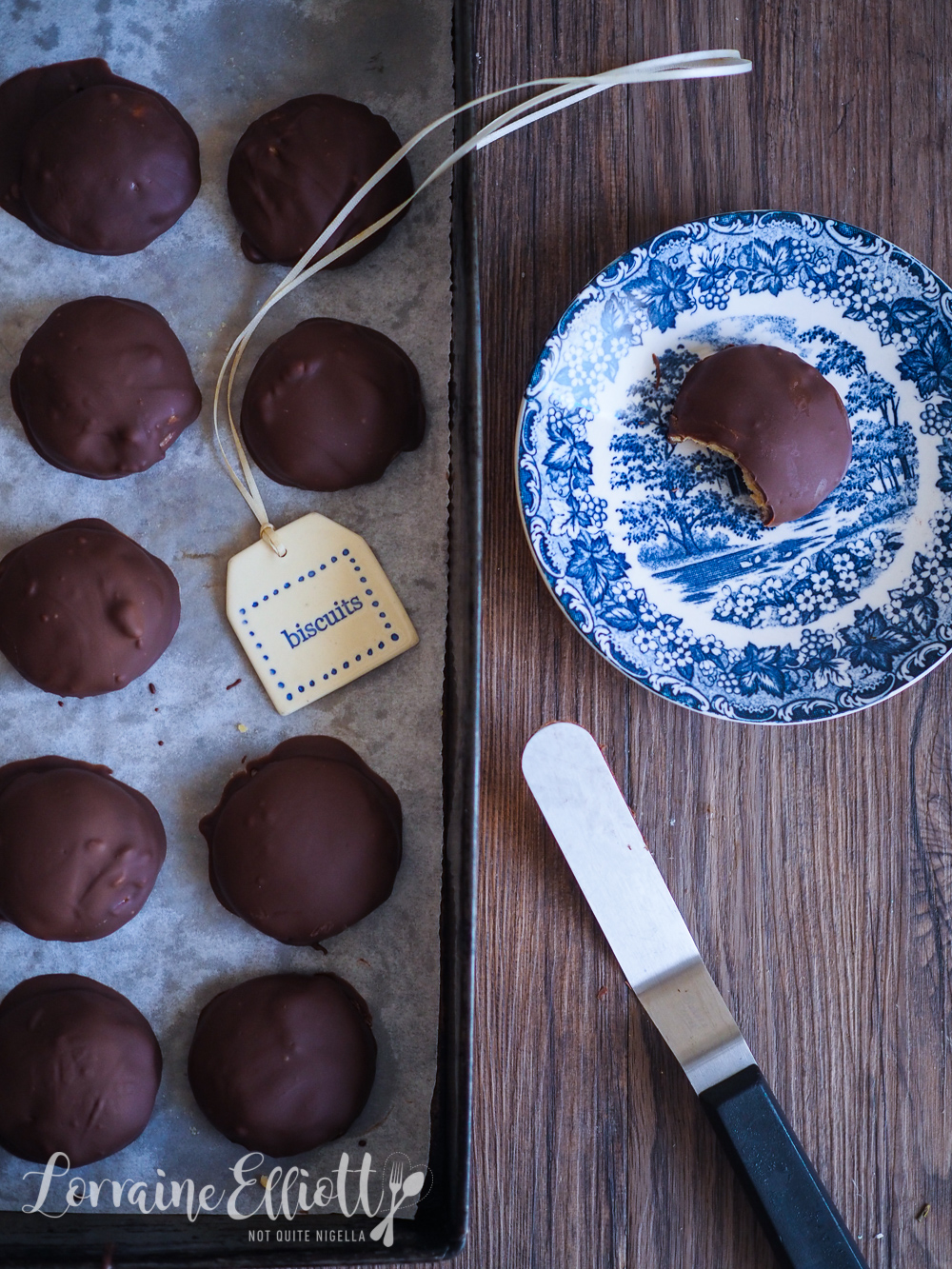 For the Peanut Butter Filling 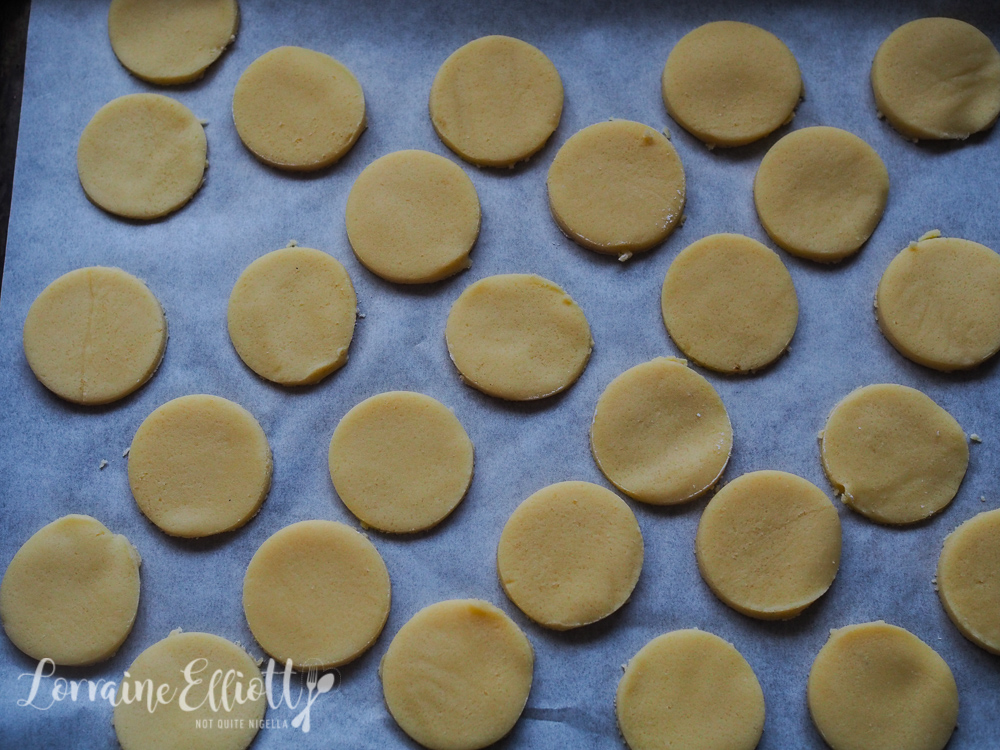 Step 1 - Preheat oven to 150C/300F and line 2 baking trays with parchment. Cream the butter and caster sugar together until light and fluffy (around 3 minutes). Mix in the flour until just combined.

Step 2 - Divide the dough in two. Flour two sheets of parchment and roll out one half of the dough and cut out rounds using a 4cm/1.6inch round cutter. Refrigerate for 30 minutes, 60 minutes if you have the time. Then bake for 23-25 minutes until pale golden. Cool completely. 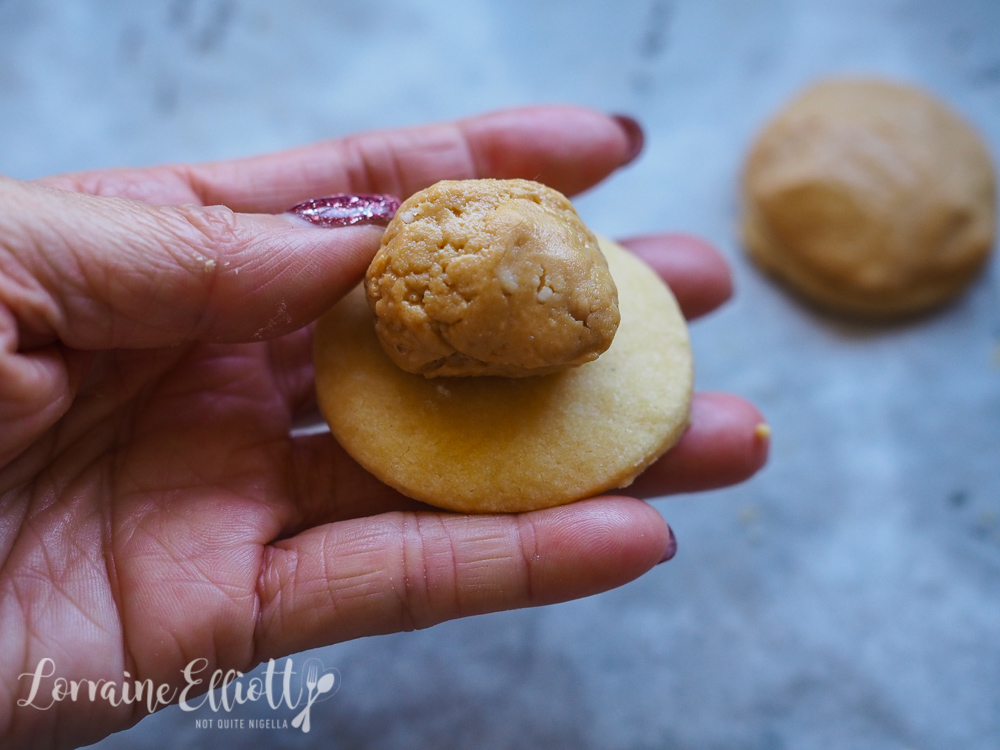 Step 4 - Pinch off small balls, around the size of a fat grape and flatten gently between your fingers or in your palm. Place on the shortbread and repeat until all cookies are covered with peanut butter. 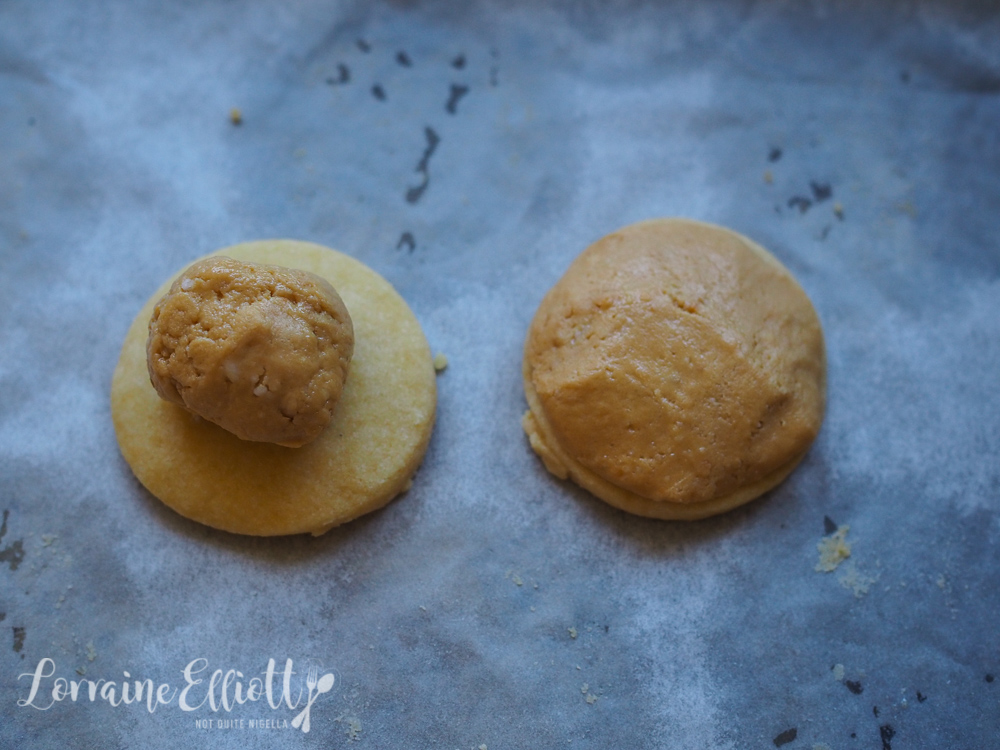 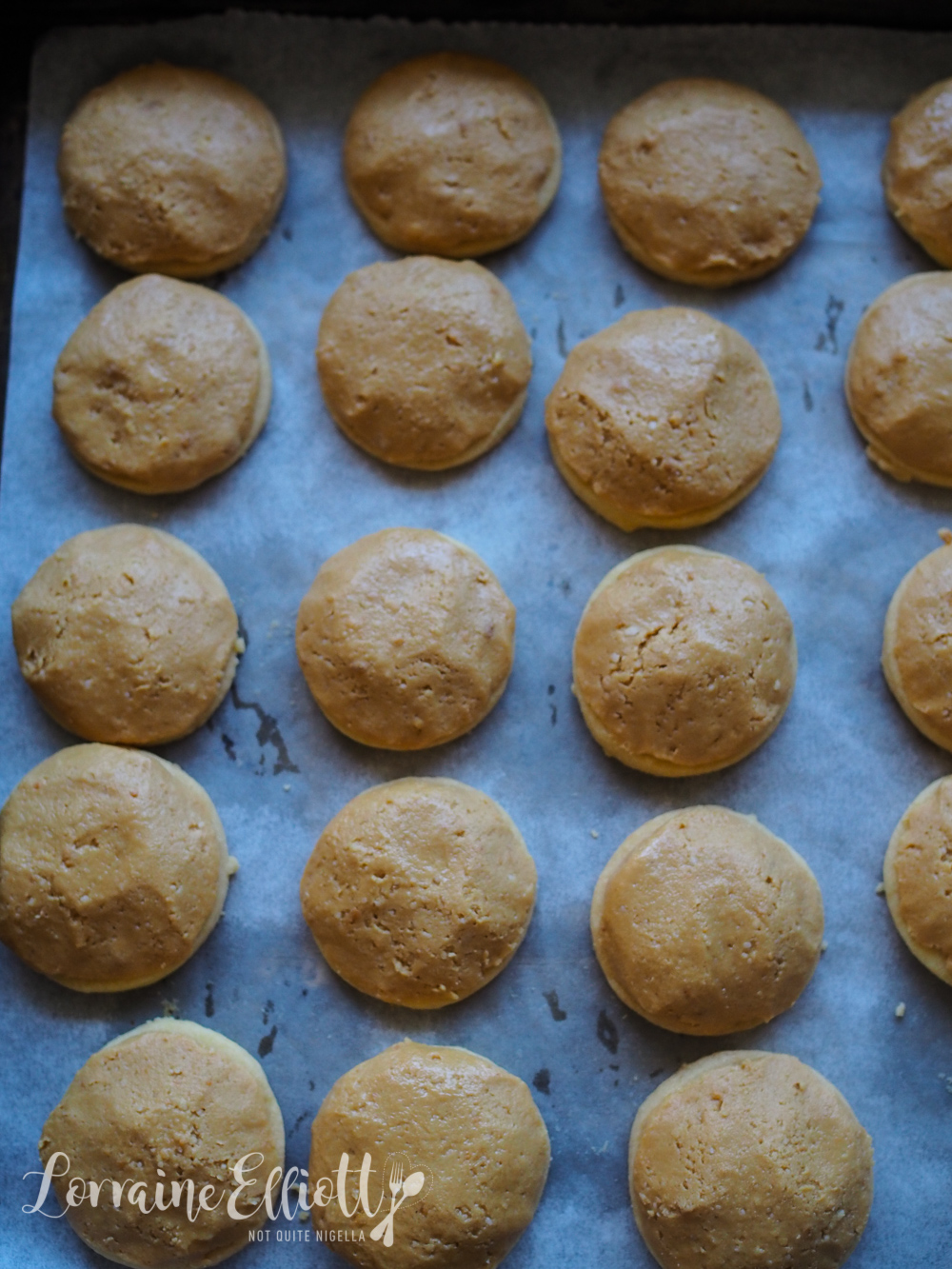 Step 5 - Melt the chocolate and stir in coconut oil. Dip the cookies in the chocolate and using two forks lift the choc dipped cookie out. I leave it for a few seconds to allow the excess chocolate to drip off before placing back on the parchment to set. Set in the fridge for 20 minutes. 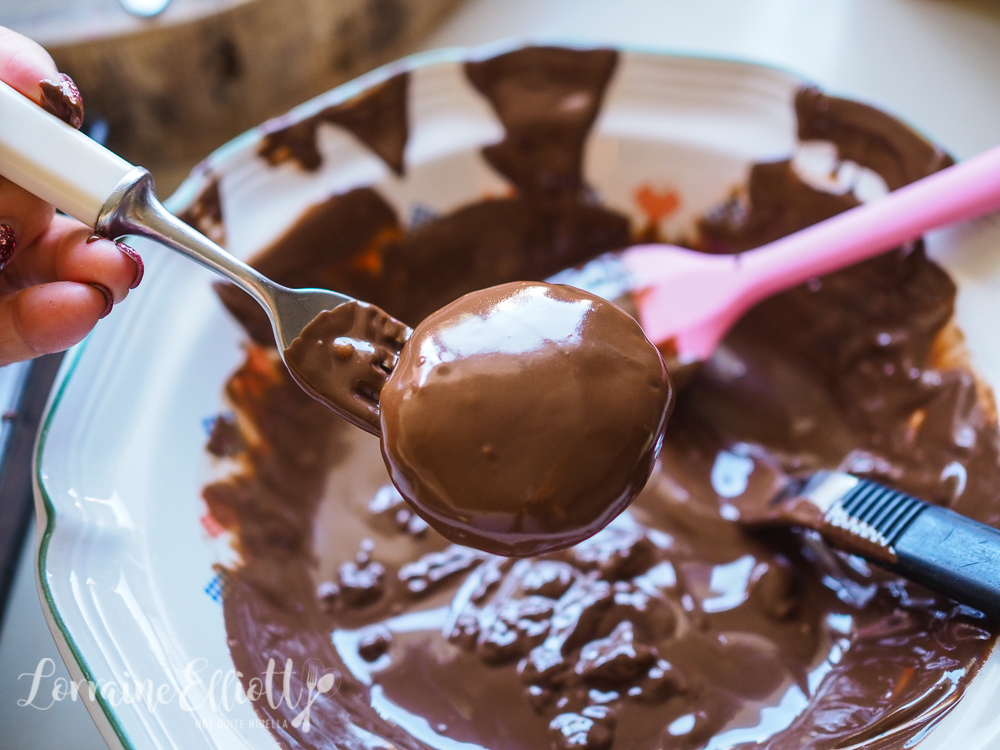