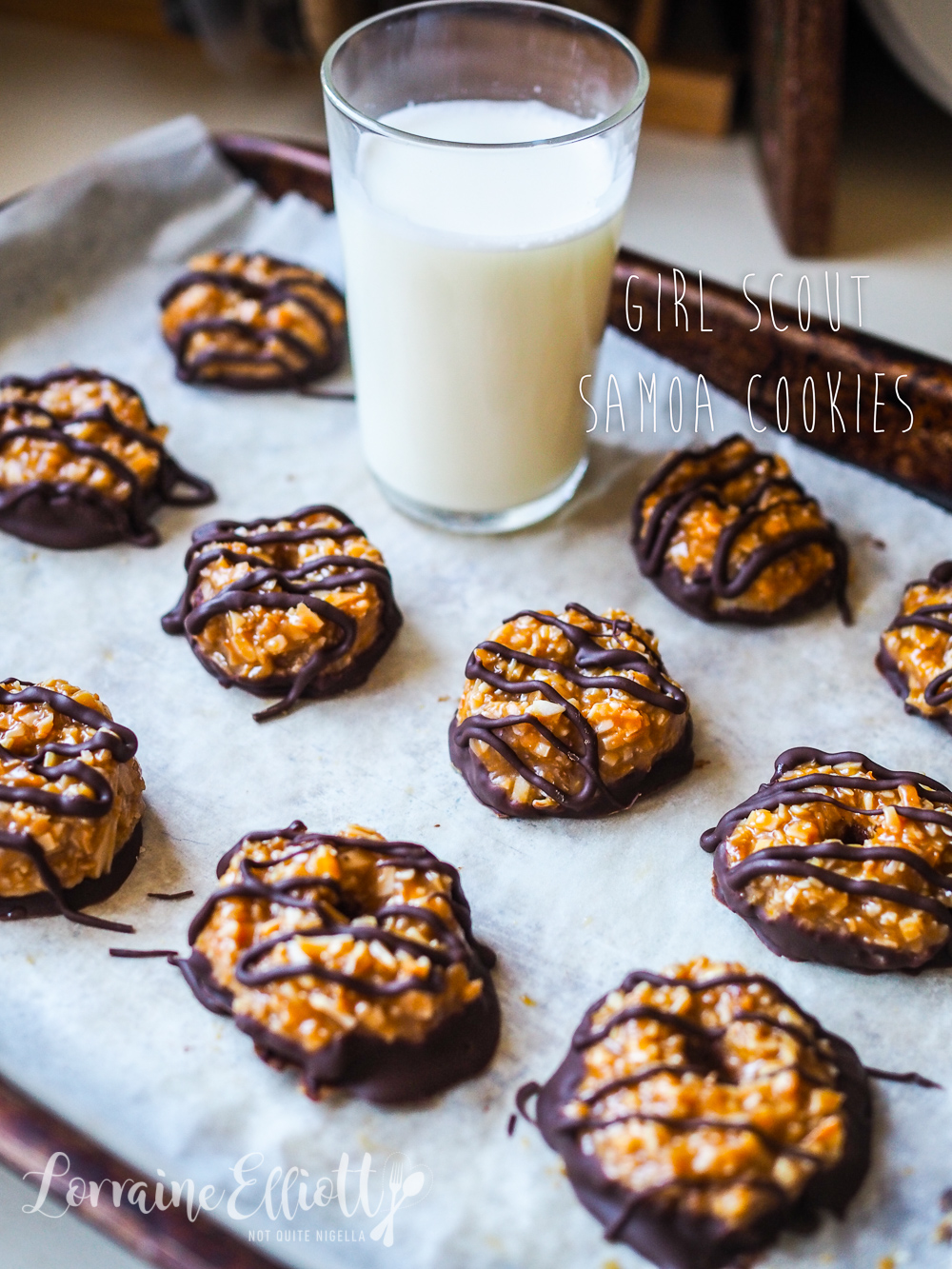 Samoas are one of the most popular Girl Scout Cookies (second in sales only to Thin Mints). Added as part of the GSC lineup in 1975, Samoas cookies are small donut shaped cookies with a cookie base, a chewy coconut and caramel topping and a dark chocolate dip and drizzle. Dare I say these home made copycat Samoas are actually better than the bought version because they use real vanilla, butter and real dark chocolate. These wonderful chewy caramel cookies or Samoas are one of my favourite ever cookies and this is a pushy recipe Dear Reader!

If you're going to make one Girl Scout Cookie, make it these Samoas. The Do Si Dos peanut butter cookies are similar to the real Girl Scout Cookies but while I love the concept of these caramel coconut cookies dipped in chocolate, the actual Girl Scout Samoas Cookies aren't as good as this home made version. Home made Samoas are SO much better! I feel terrible saying that because I love that GSC help fundraise and help the girls become financially literate but really there's no comparison for a home baked cookie. 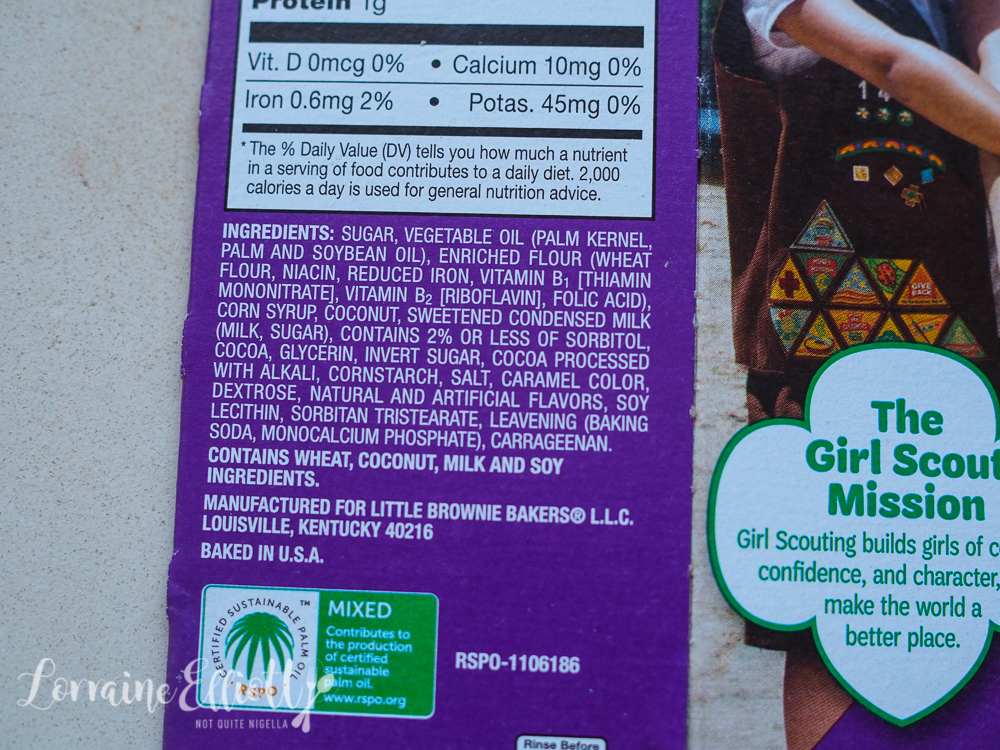 Firstly Samoas don't use butter, they use vegetable oil including palm oil. They also don't use chocolate, they use a chocolatey coating that quite honestly doesn't have that much flavour. The original Samoas also don't contain vanilla but I added it because it makes them smell wonderful. 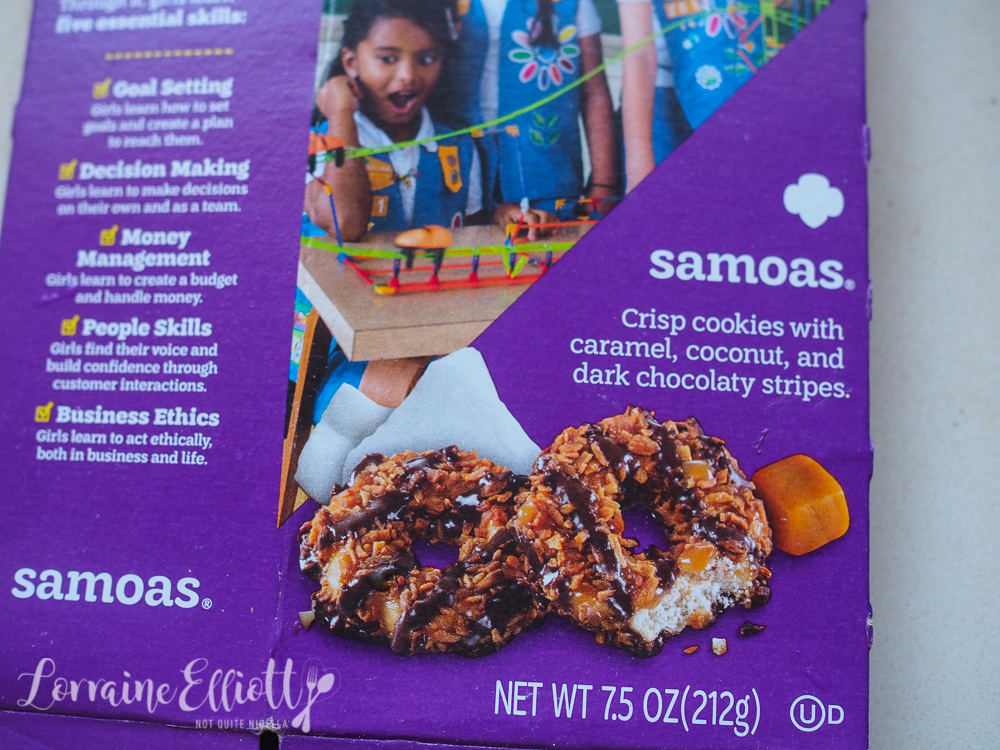 Samoas are sometimes called Caramel DeLites although the two cookies have some slight differences. That is because the Girl Scouts have two bakeries: ABC Bakers and Little Brownie Bakers. The latter make Samoas while the former make Caramel Delites.

There are three parts to a home made Samoa cookie:

Samoas are small at 5cms or 2 inches in diameter but you can make these larger if you don't have a cutter that small. I used a bubble or boba tea straw to punch out the centre. Or you can leave it as a circle rather than a donut.

This is a bit of a departure, but I used a sheet of shortcrust pastry or pâte brisée to make the cookie base. This will make it thin which is what you want, because the best Samoas are ones with a bit more of the coconut caramel topping on them. I use some home made shortcrust pastry and they had good structural integrity and were deliciously crisp too. Traditionally, Samoas have more shortbread and less caramel coconut, while I switch around the ratios and use more coconut caramel and less shortbread (or in my case shortcrust).

Time poor and want to skip a step? Use store bought shortbread fingers (thinner ones are ideal). The caramel filling is relatively easy and can be done quite quickly. 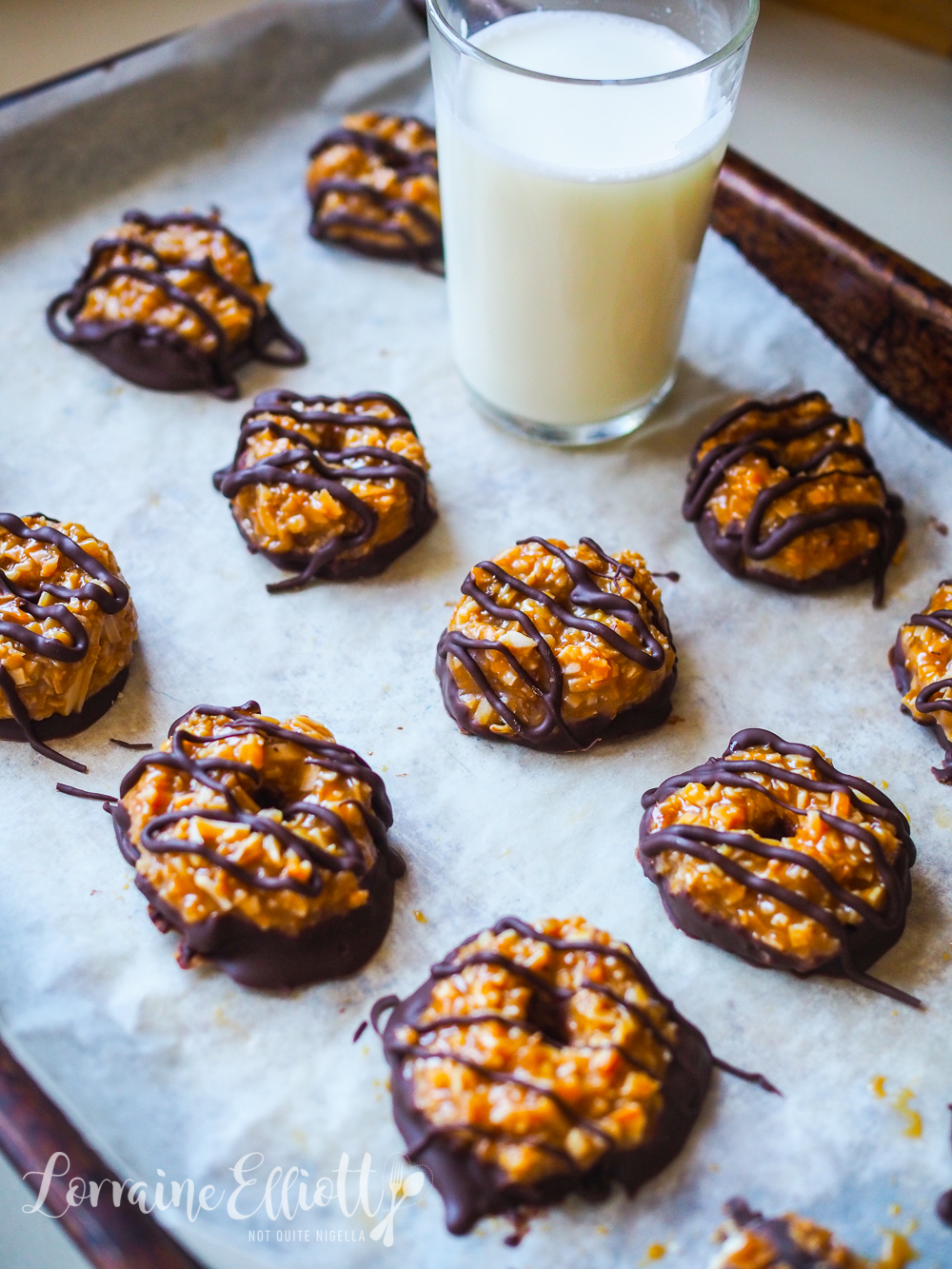 You can make your own soft caramels (see my soft caramel recipe here, just omit bacon) but I used Werther's chewy caramels. Other caramels may also work (like Jersey caramels) but I haven't tried these.

Use shredded coconut rather than desiccated coconut. I spent a lot of time just on trying to get the right coconut texture. Maybe American coconut is different but Australian coconut is either super fine (desiccated) or comes in flakes or large shreds. The best solution was to toast it in the oven until browned and crisp and then crumble it up with your hands-it will crumble easily once toasted. Don't use a knife as the coconut will go everywhere and don't put it in a food processor or you'll end up with desiccated coconut. 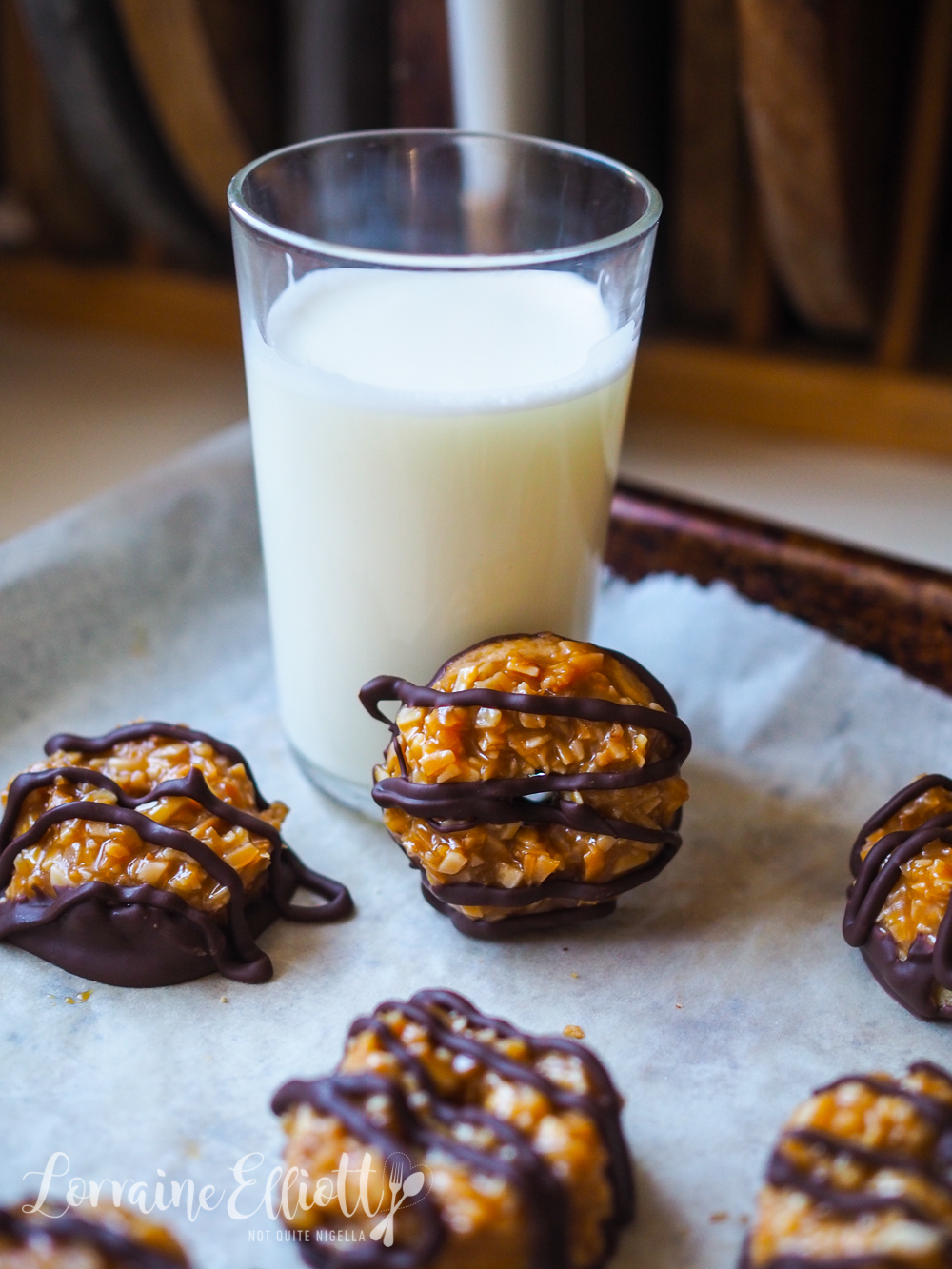 I always thought that Girl Scout Cookies were a bit mysterious and I'm so glad that I got the chance to try these and make my own versions because they can be hard to find as they only come out once a year. And these home made Samoas are now one of my favourite cookies EVER they're that good. When I made my first batch of Copycat Girl Scout Cookies with the Peanut Butter Do Si Dos I think I chose the hardest ones to try a version of. These ones are much easier and I got the tips for the coconut caramel from Instructables.

The next ones I'll make are the Tagalongs and then after that I'll give the Lemon Ups a go although the Lemon Ups are the most gorgeous cookie with inspirational sayings stamped on them and I won't have those stamps. A lot of people ask about the Thin Mints but our Australian mint slices are said to be better than Thin Mints. I actually love testing out different recipes to find one that tastes like the real thing and look upon these copycat recipes like mysteries that need to be solved. 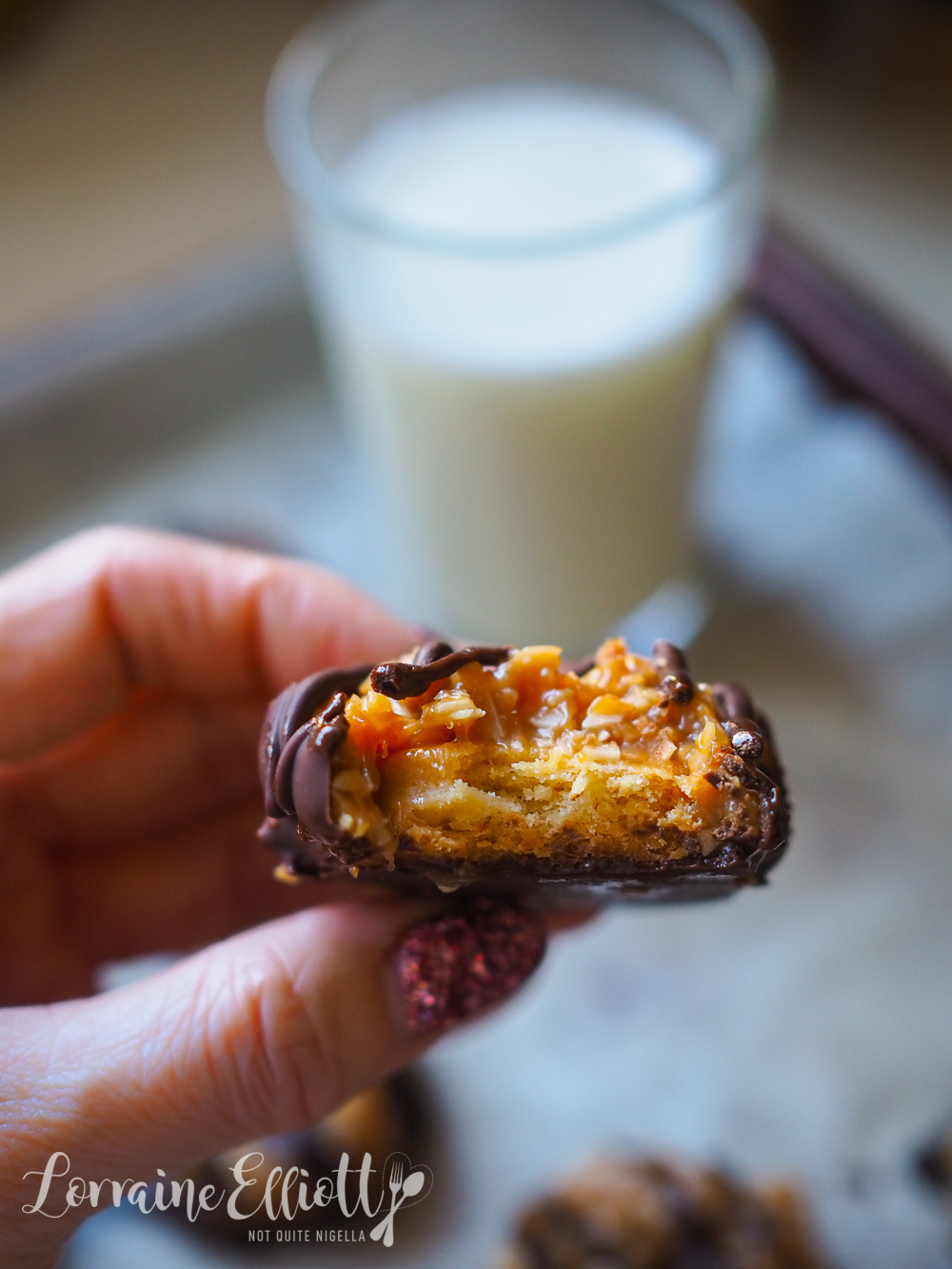 Speaking of mysteries, my true crime listenership has gone up exponentially during the last few months. A lot of my friends and I love reading and listening to true crime books and podcasts. Women in particular are said to be big fans of true crime.

I like reading about people that survive crimes because I like to learn tips on how to survive. They're also like puzzles, that you try and solve, perhaps with trying to understand human nature which is something that many women are particularly skilled at.

That got me to thinking about my favourite true crime mysteries. One day I'd love to know about what happened to Elisa Lam. She is the woman who was found drowned in the water tower at The Cecil hotel in Los Angeles. There is some eerie footage of her taken in the elevator where she looks like she is being chased or is scared of someone. 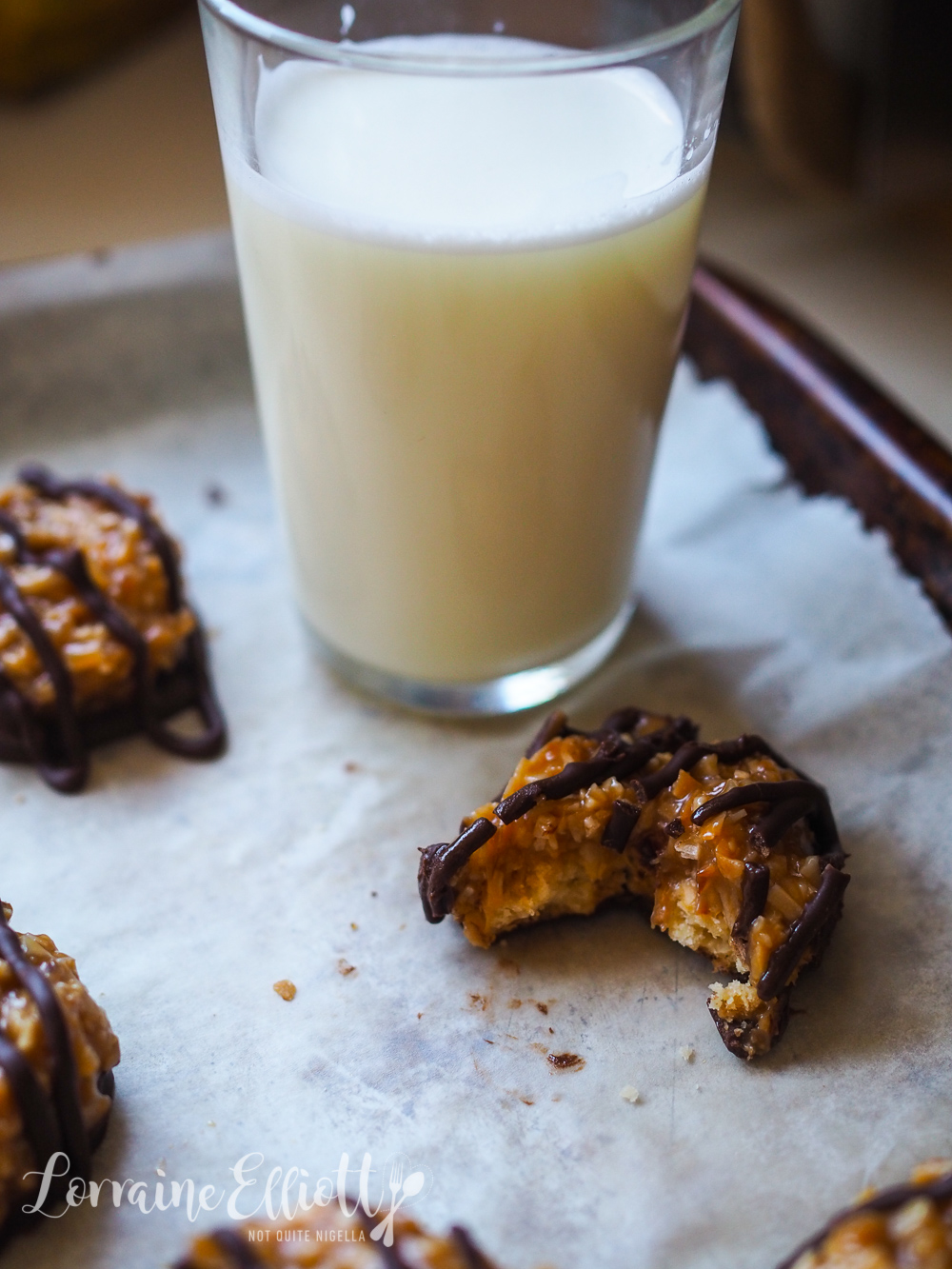 I'd also love confirmation on Jon Benet's murderer and who murdered Abby Williams and Libby German, the two girls who posted some grainy footage on Snapchat of a man walking towards them on the railway tracks just before their bodies were found. And of course I'd love to know the classics like Jack the Ripper and Zodiac killer. So many mysteries to solve but I promise this Samoas cookie is one less mystery to solve!

So tell me Dear Reader, are you obsessed with true crime? What mysteries would you love solved? Have you ever tried a Samoa cookie?

Step 1 - Place the butter and flour in a food processor and process until it resembles fine sand. Then Add the water and salt and pulse quickly until it starts to come together. Roll out onto a floured surface and knead until it becomes a cohesive dough. You may need to add a little more flour or water. Rest for 1 hour. 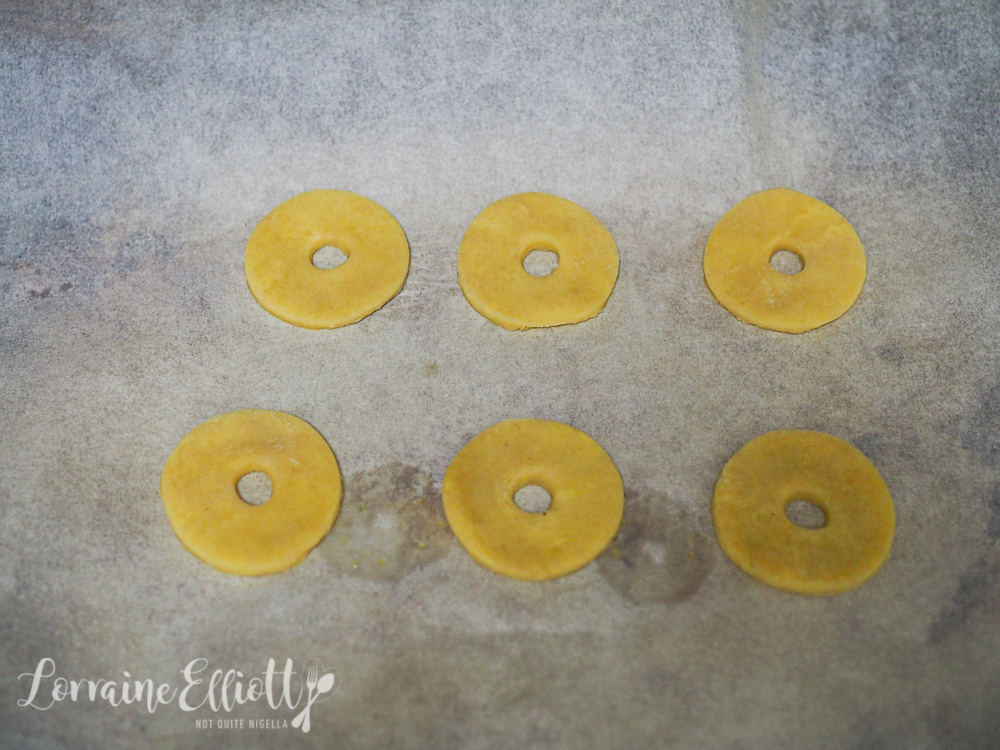 Step 2 - Preheat oven to 180C/350F and line 2 baking trays with parchment. Flour a board and roll out dough. I find it easier to divide the dough in half and do it in two lots. Cut with a small round cutter around 5cms/2inches and cut out a small hole in the centre (I used a bubble or boba tea metal straw). Gently lift onto the parchment and then refrigerate for 45 minutes. Then bake for 15-20 minutes or until light golden. Cool completely. 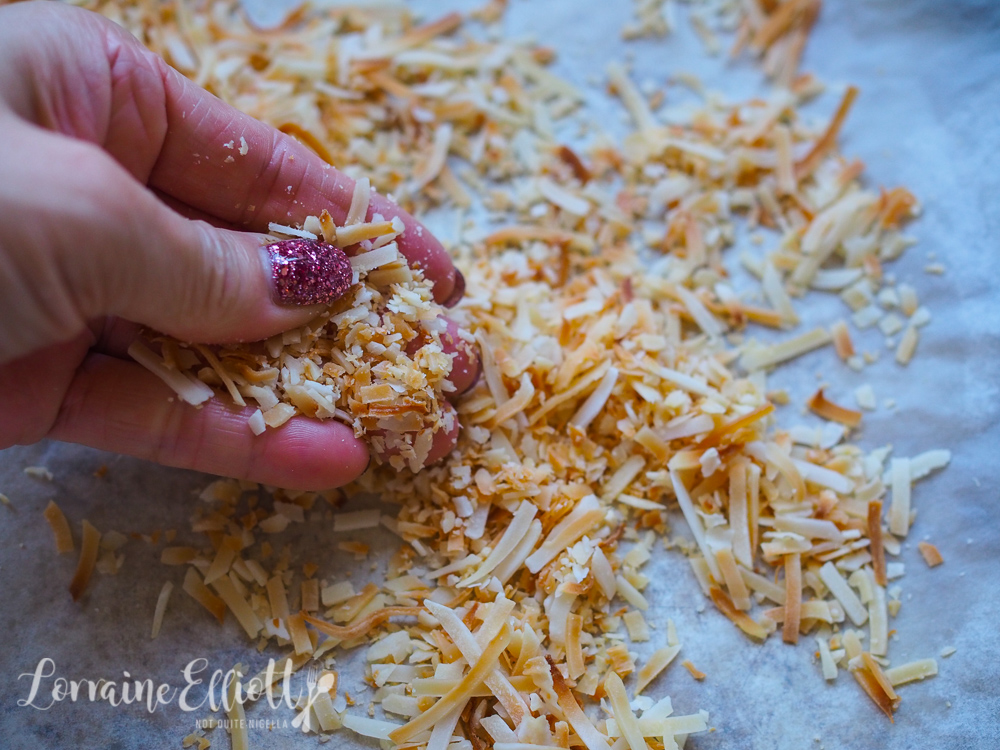 Step 3 - Make the coconut filling. Preheat oven to 180C/350F and spread the coconut out on a large parchment lined tray. Bake for 8-9 minutes tossing the coconut gently halfway so that it is evenly baked. Cool for 5 minutes and then crumble into small pieces with your hands. 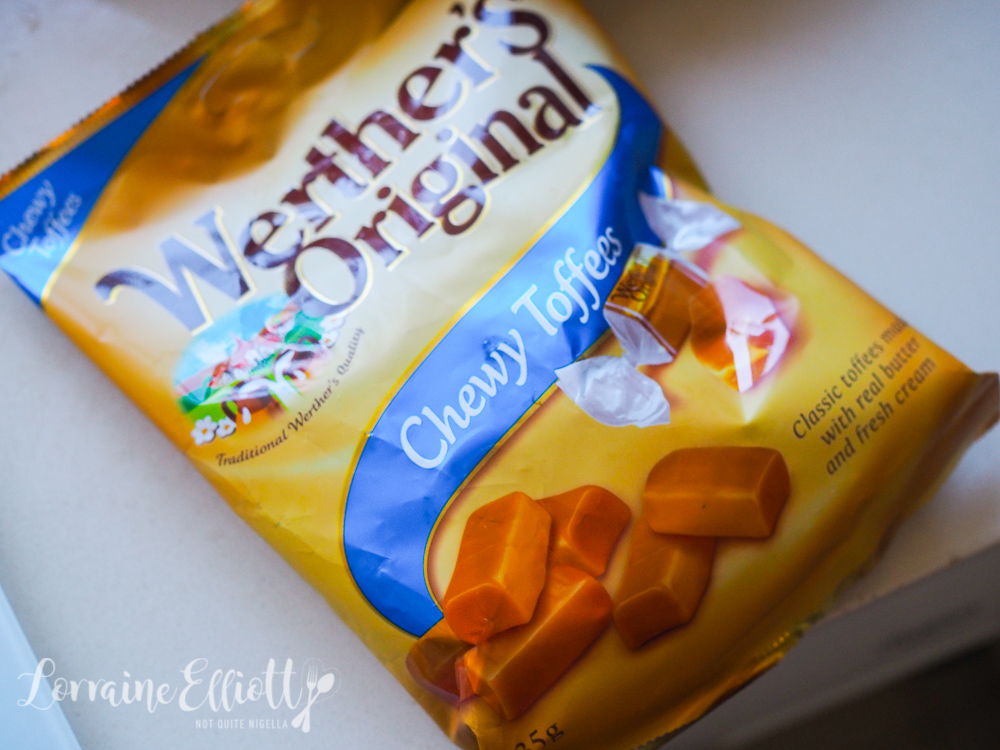 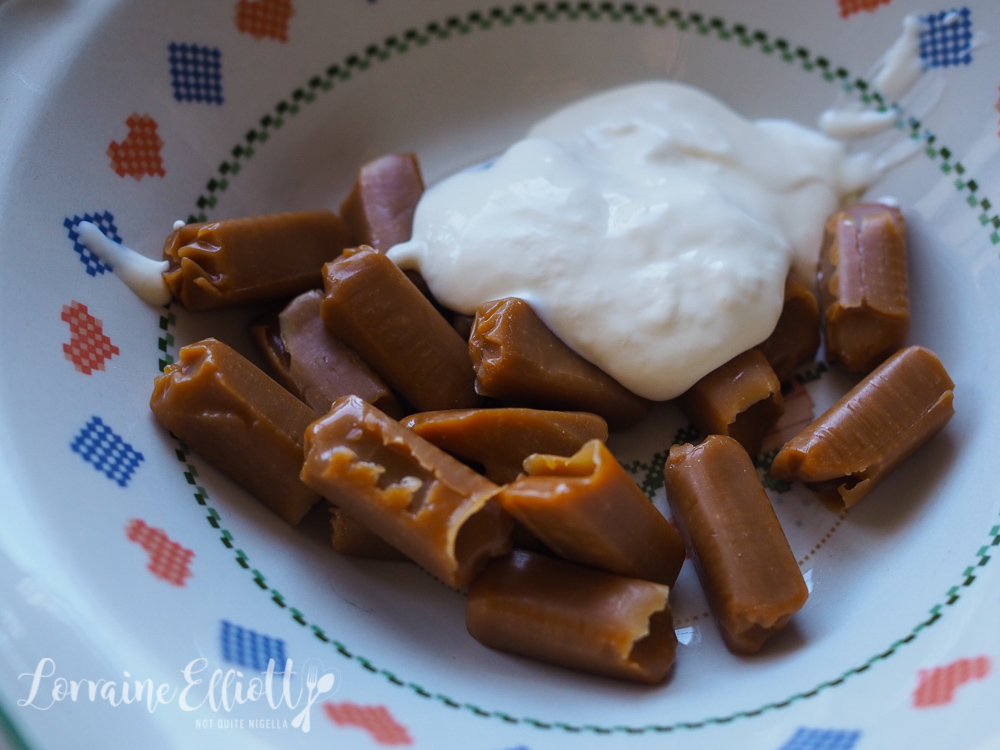 Step 4 - Remove the caramels from the wrappers and place in a large microwave proof bowl. Add the cream or milk and heat for 1 minute on high power. Stir to combine and then microwave again in 30 second bursts until the caramels have completely melted and you can stir it to make a smooth caramel. Add the coconut, vanilla and salt and stir to combine. 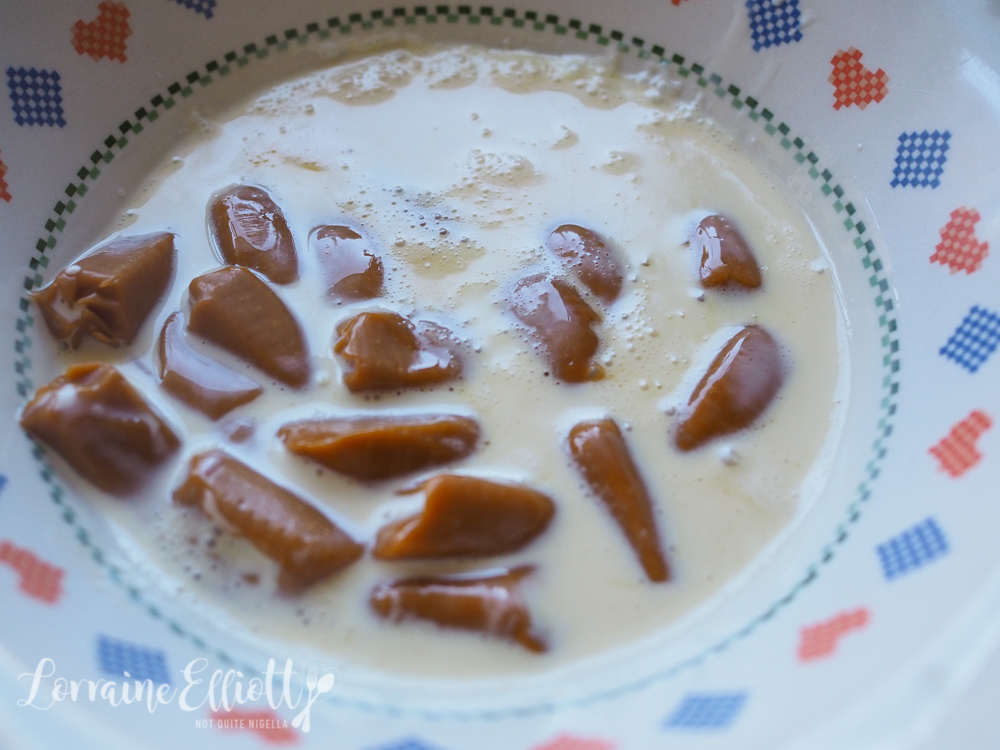 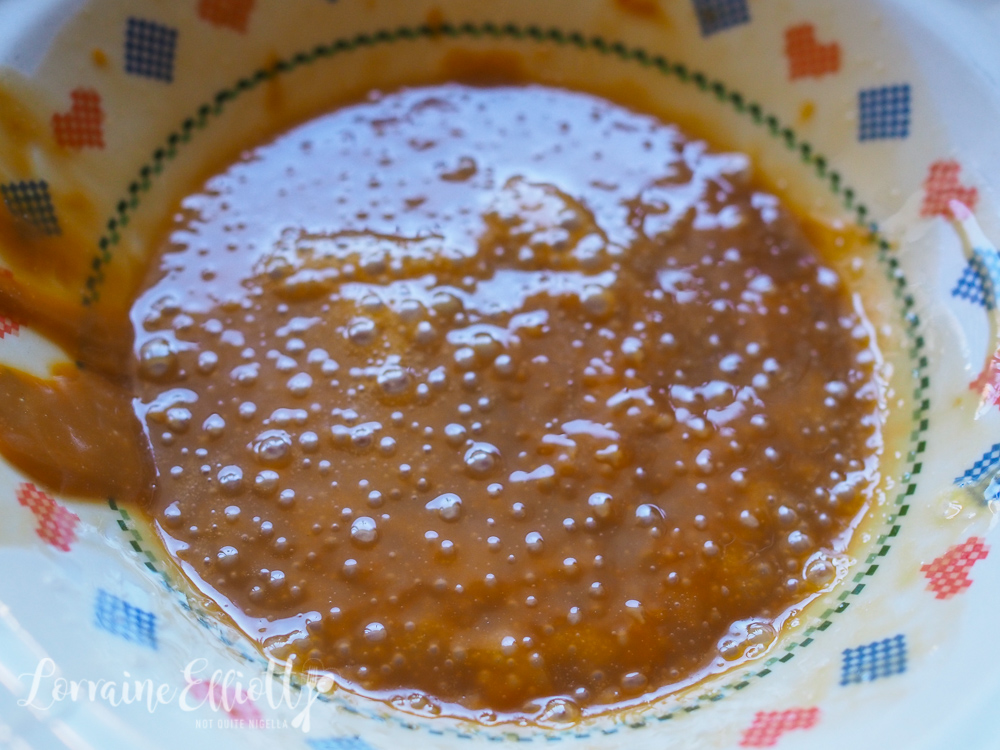 Step 5 - Use a small spoon or palette knife and place the coconut caramel on top of each cookie. I used a chopstick to poke a hole in the coconut for the centre hole. Refrigerate until firm. 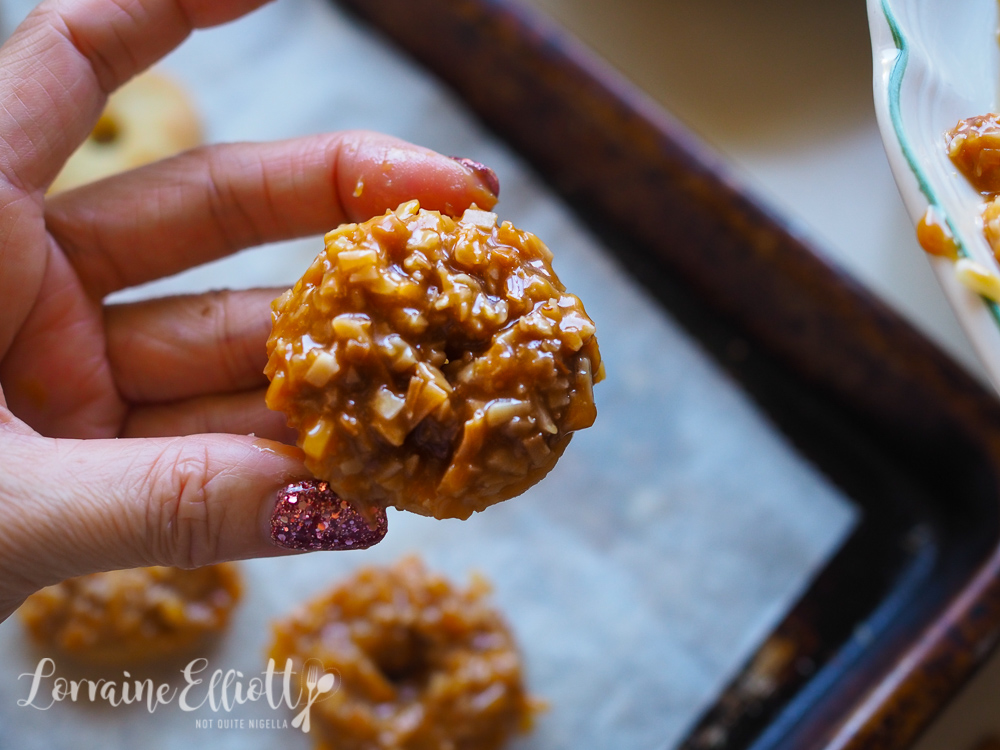 Step 6 - Melt the chocolate in a double boiler or in a microwave and stir until smooth. Using a chopstick in the hole fish a cookie and dip the bottom into the chocolate and place on a parchment lined tray. Place the remaining chocolate in a small piping bag and pipe stripes of chocolate on top of the cookies. Allow the chocolate to set. Store in an airtight container in the fridge (these are shelf stable for a week if they last that long!). 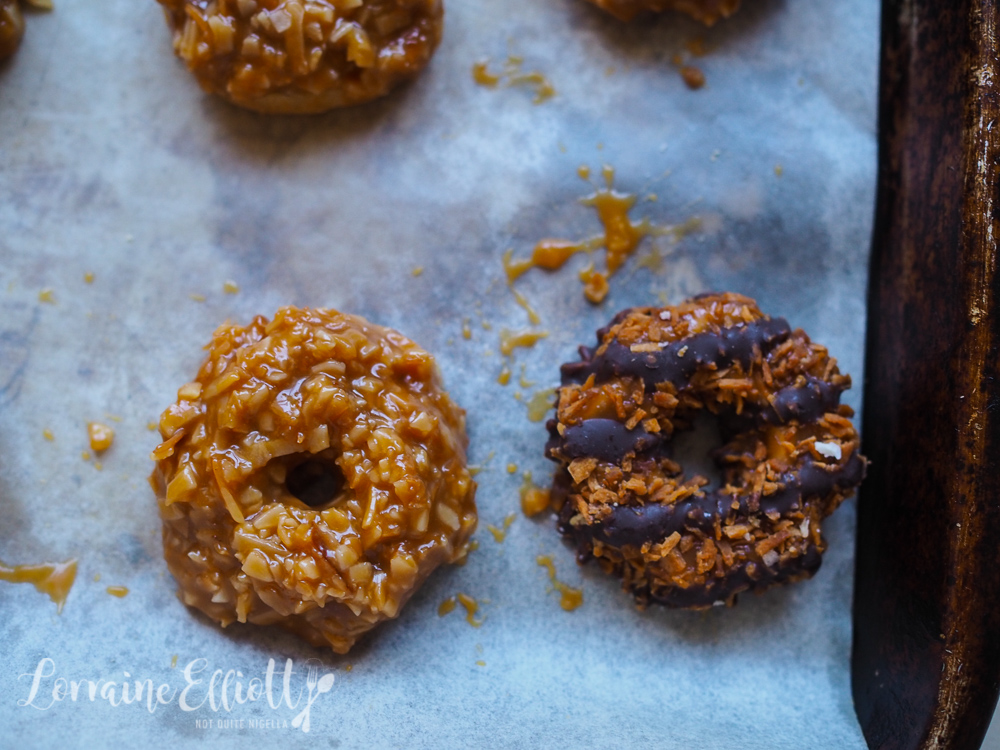 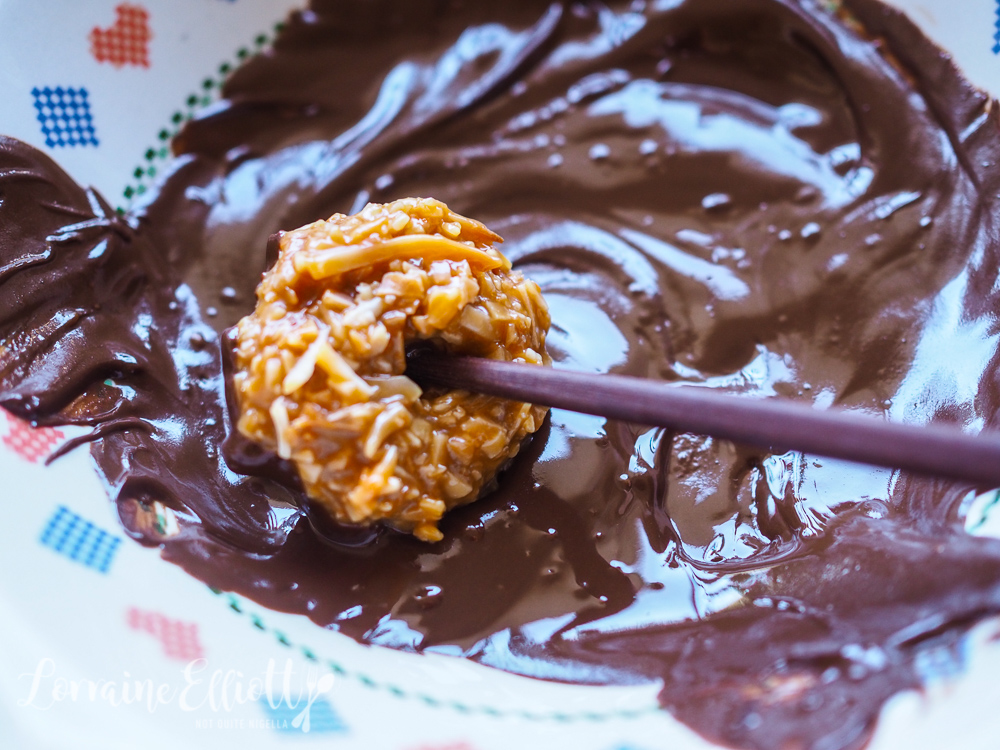 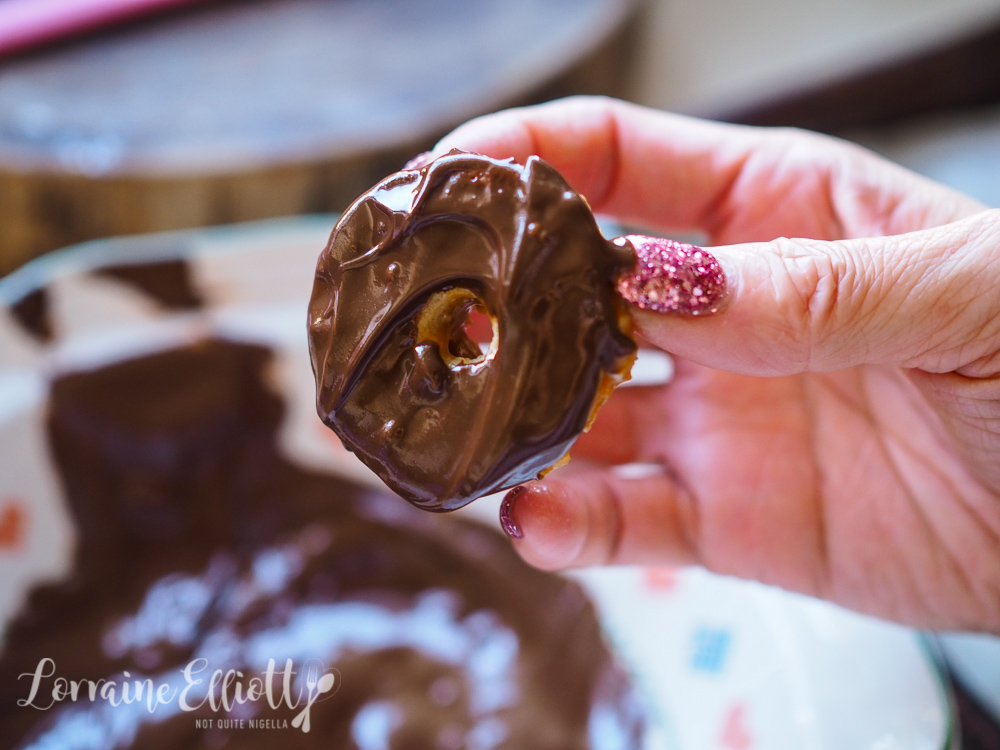 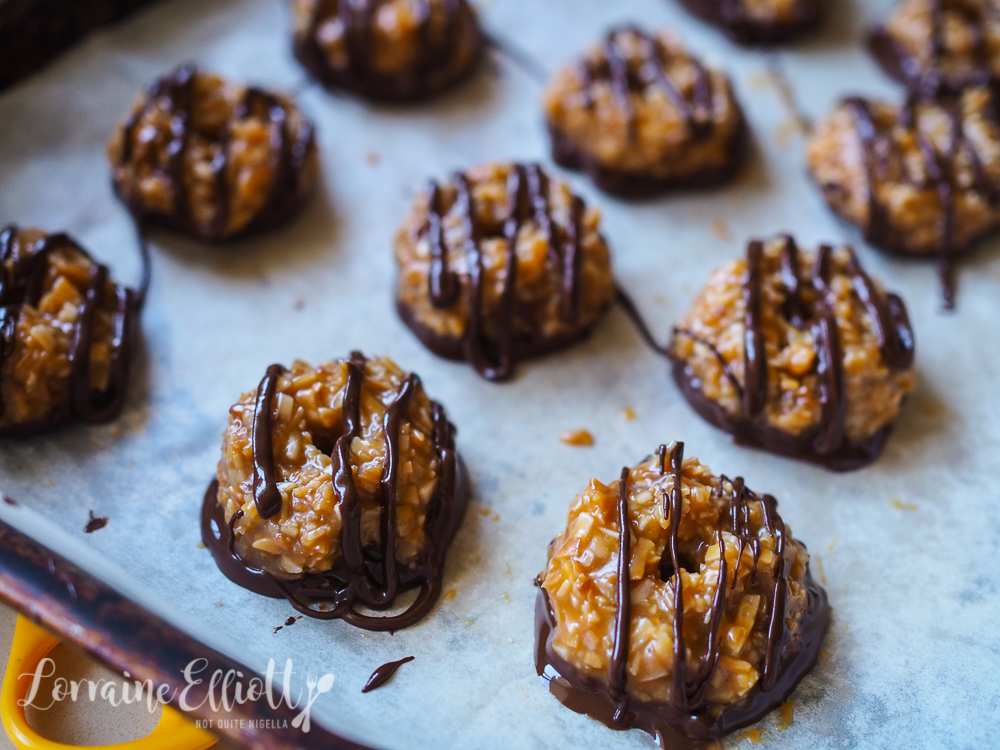