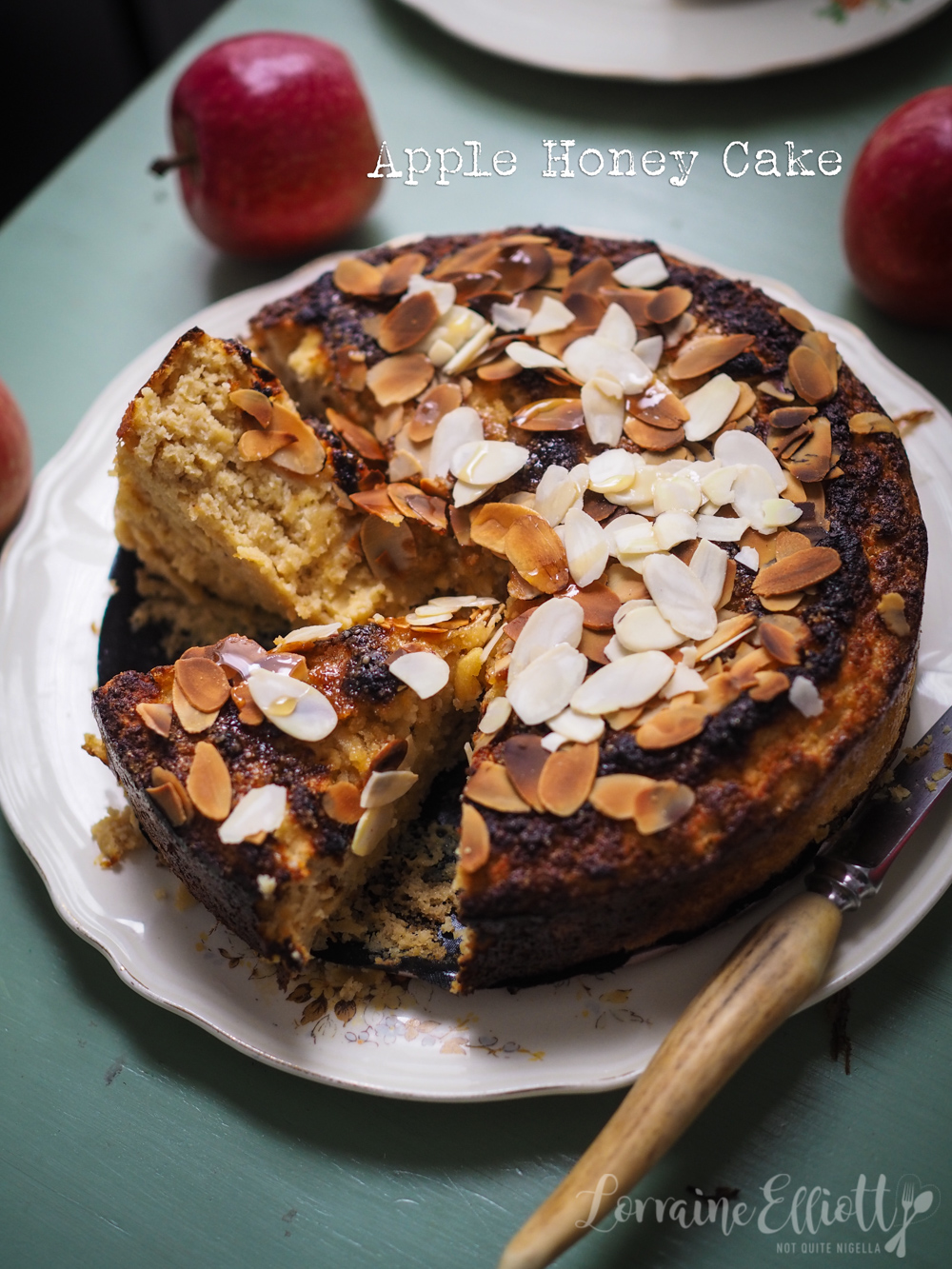 This apple honey cake is perfect for the Jewish new year holiday Rosh Hashanah coming up but even if you aren't religious this is a lovely cake to try. It's feather light, simple and flour/gluten free with lots of apples, honey, spices and almonds. I called her Aliza.

Like a lot of Australians I actually don't really subscribe to any religion but I do like reading about food rituals associated with religion. And the reason why Ashkenazi Jews served apples dipped in honey during the Jewish new year or Rosh Hashanah was because they believed apples had healing or medicinal properties while honey brought hope that the following year will be sweet. This year it is on the 25-27th September 2022. As for me I just wanted to bake a cake and eat it too. 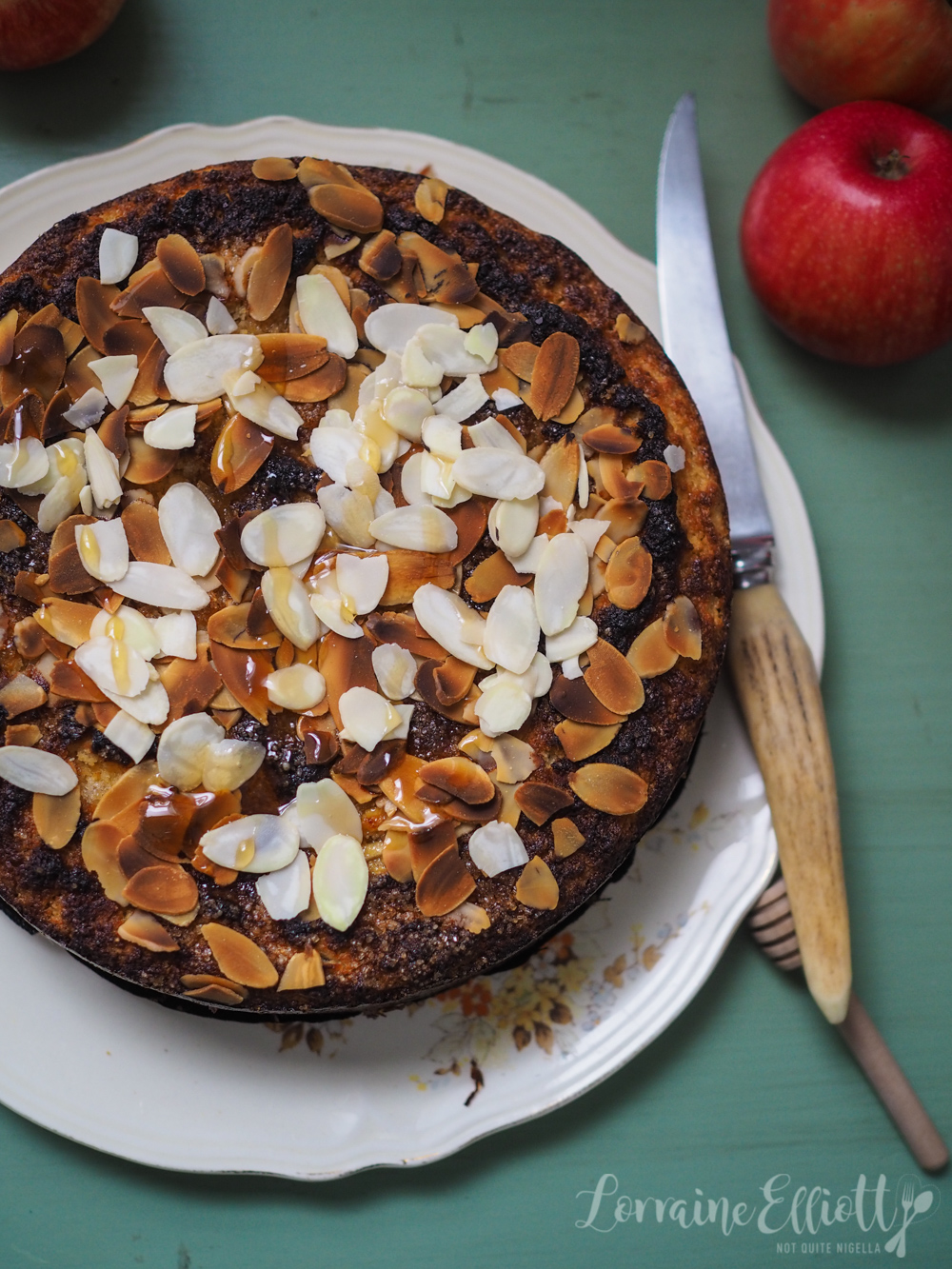 The texture of this cake is absolutely lovely-the egg whites give the cake a beautiful gentle rise and delicate texture while the apples give it a wholesome quality. There's no oil or butter in this cake and yet it is not dry at all thanks to the apples and eggs. I'm getting used to my new oven-the old one limped along and I swear everything cooked slowly but this one is powerful and you can't just leave it for 5 minutes because the cake browned a bit more than I wanted. Seriously when I opened it at 30 minutes it was golden perfect but then it became too dark. I added some more flaked almonds on top and honey. 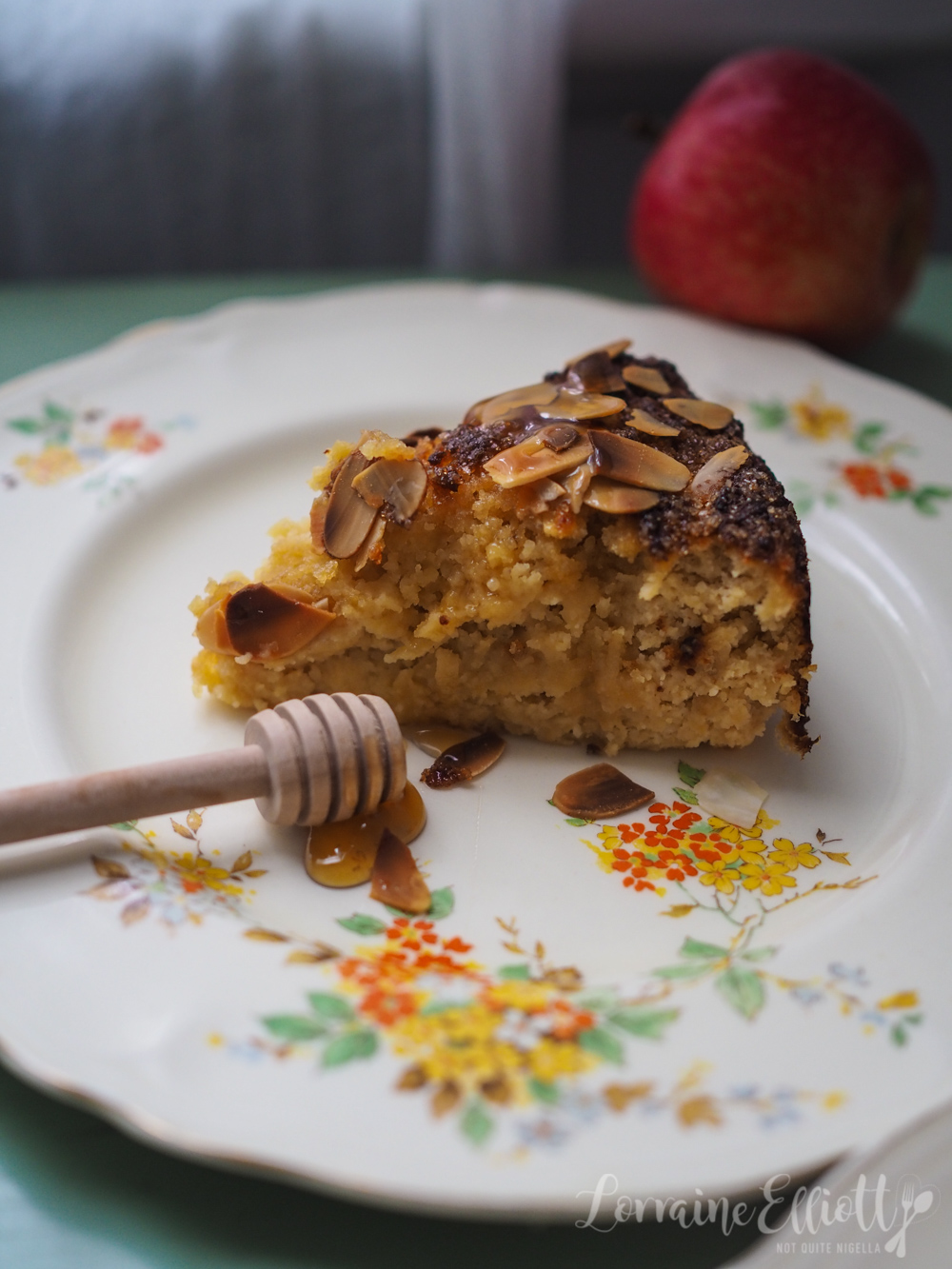 I made this cake on the Queen's Memorial public holiday last week which was a nice, lazy day off. Mr NQN napped upstairs with Teddy as it is his favourite past time on a public holiday and Milo and I baked downstairs. We've now had Milo for 6 weeks and his personality has really come out as has his allegiances. At first I thought he might attach himself to Mr NQN and there would be three boys and one girl in this house but it seems that Milo has picked me as his human. Everywhere I go he follows much like Mochi. When I am working he presses his nose against your leg to let you know that he's there and taps you when he wants your attention with his big bear paws. I call him my little brown bear. 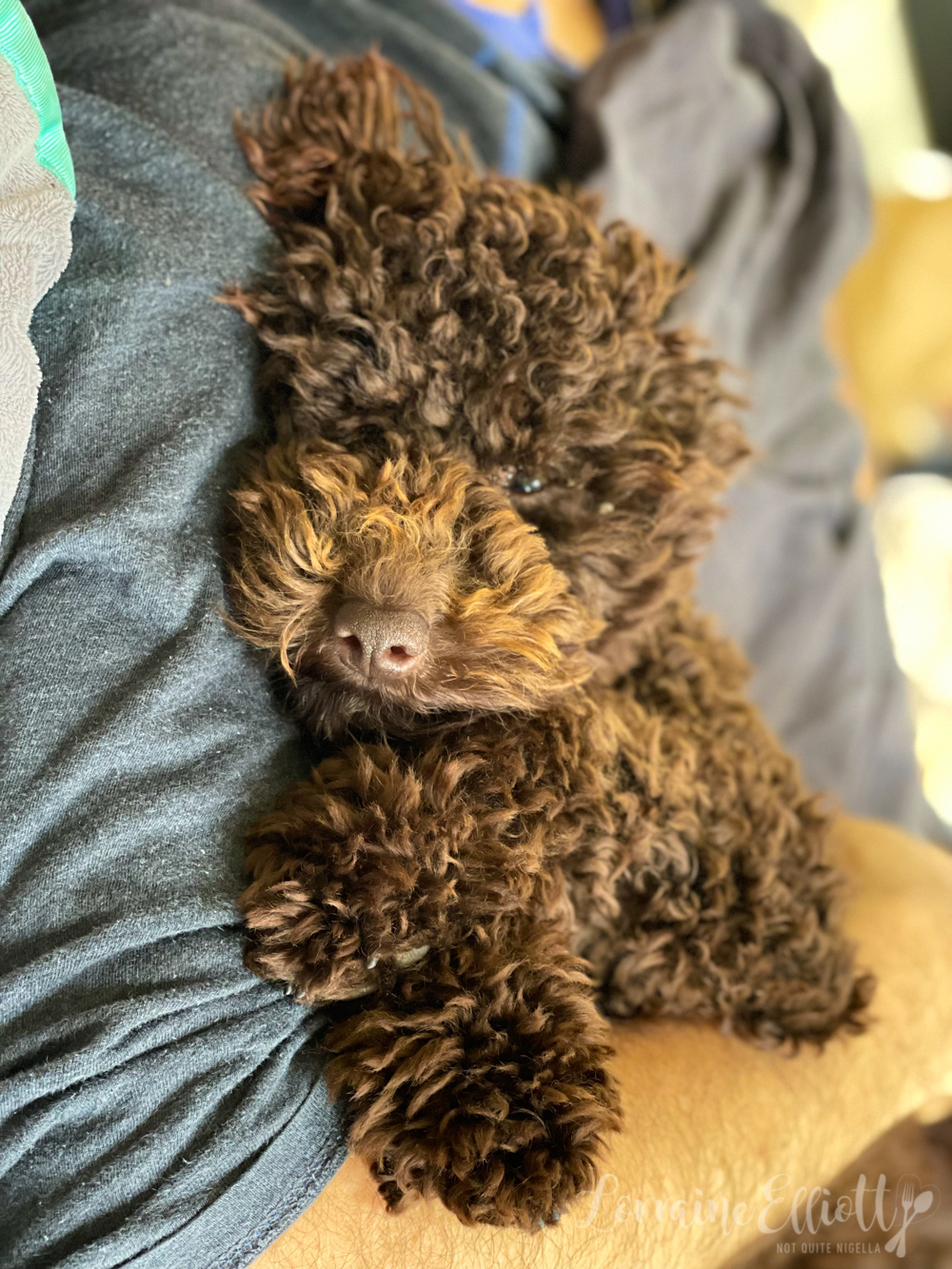 When we were discussing dog allegiances Mr NQN said that he wasn't surprised that Milo gravitated towards me. He pointed out that Milo's personality is much more similar to mine. Milo is boisterous and outgoing while Teddy is more reserved like introverted Mr NQN. While Milo loves affection and cuddles, Teddy isn't as fond and everyone gets around 10 seconds of cuddling Teddy before he wriggles out of your grasp (as preferred human Mr NQN gets 15 seconds of cuddles, a whole 5 seconds more). Milo will literally sit cradled in my arms like a baby until I get tired of it. I considered calling this cake Milo because he loved the smell of it and like honey, Milo is so very sweet.

So tell me Dear Reader, do you celebrate any religious holidays? Do you think you'd like this apple honey cake? And does your bonded pet have a similar personality to you? 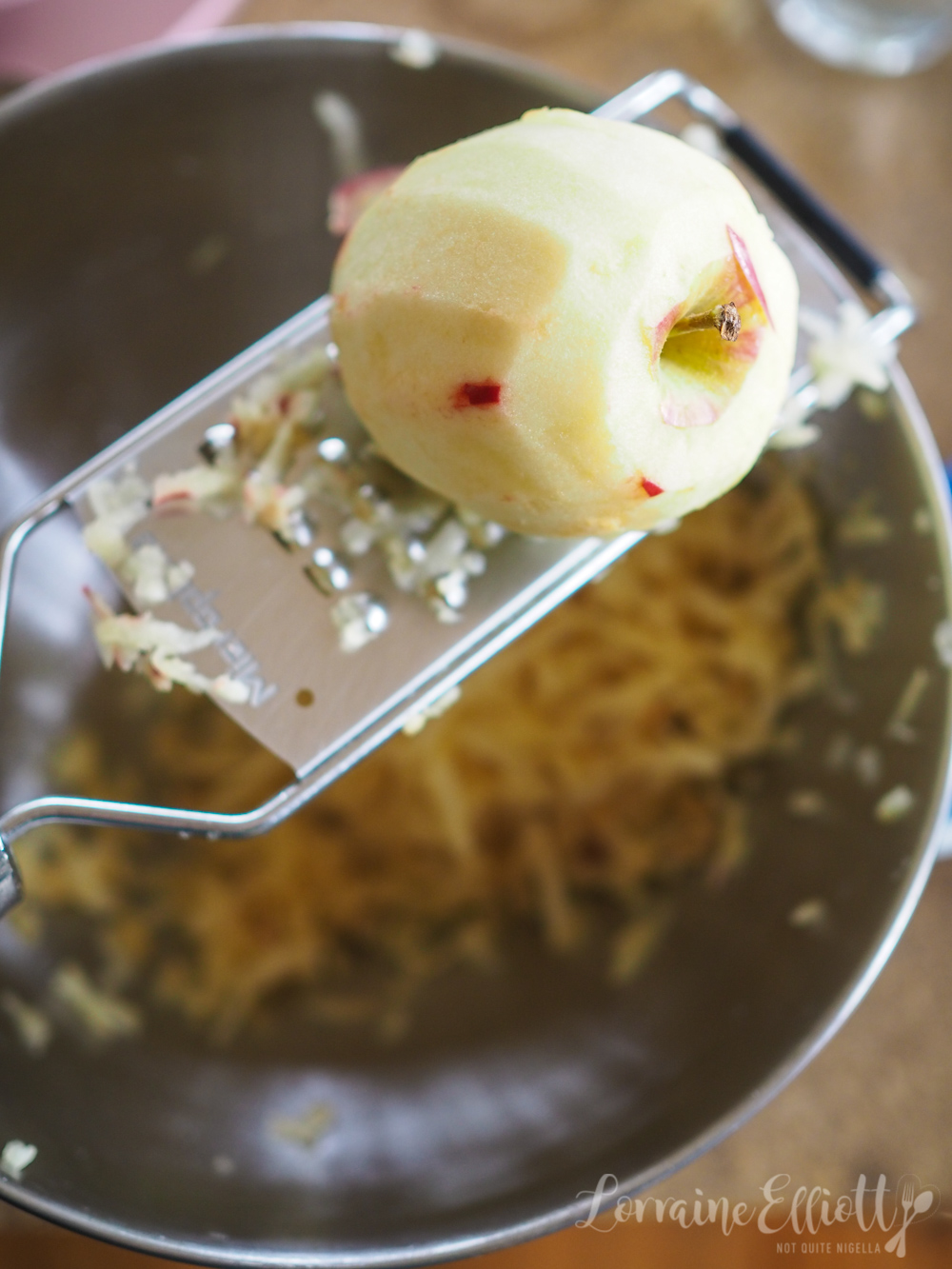 Step 1 - Preheat oven to 180C/350F and line the base and sides of a 20cm/8inch springform tin with parchment. Peel and grate the apples and toss with the lemon zest, juice, vanilla and cinnamon and set aside. 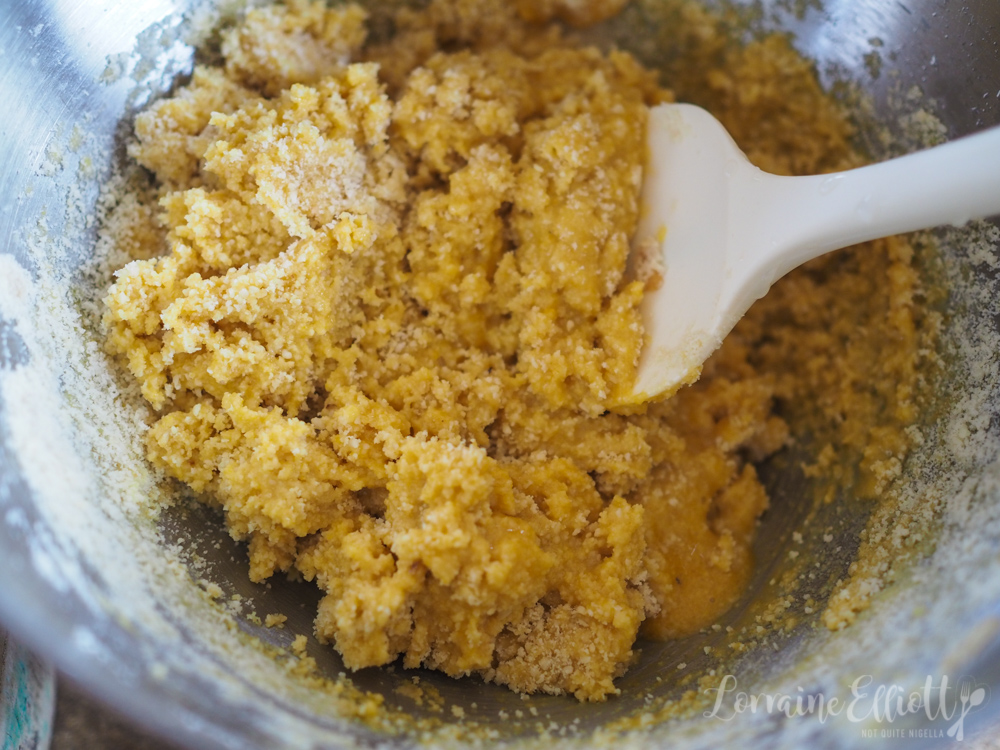 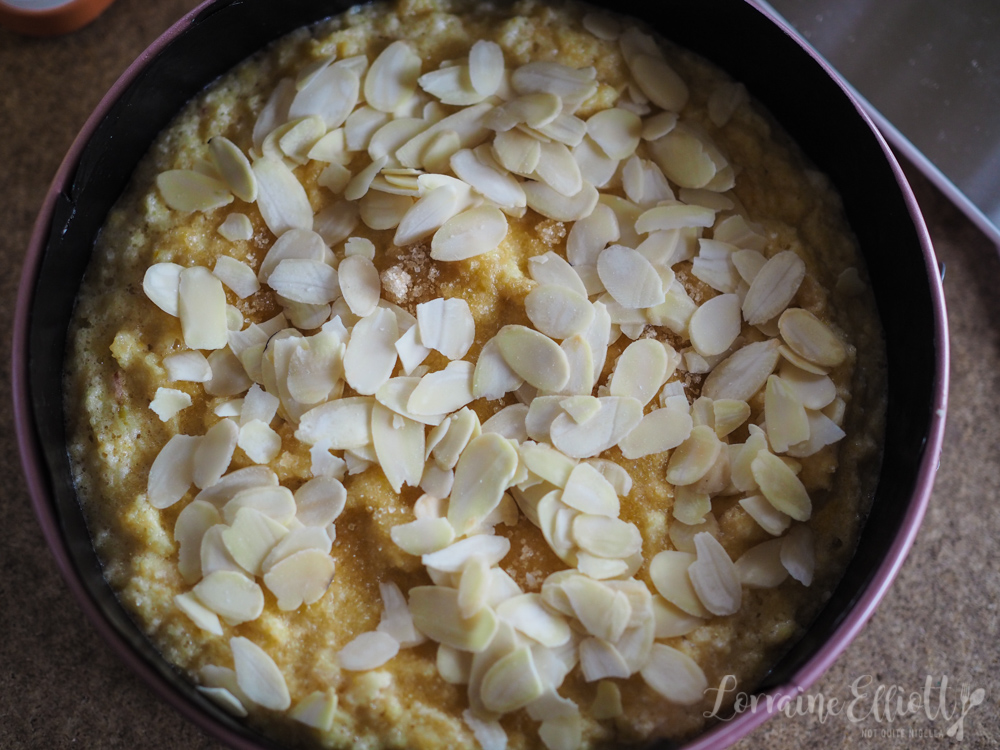 Step 2 - Separate the eggs making sure that there is no yolk in the whites at all. Whisk the egg whites until you get stiff peaks. Set aside in a bowl. Then in another bowl beat the egg yolk and honey for a minute and then add the almond meal. Then stir in the apple mixture and then gently fold in the egg whites in four lots making sure that there are no streaks of white remaining. Scoop into the baking tin and sprinkle with the flaked almonds and bake for 30 minutes or until the centre springs back when touched. Cool in the tin on a cake rack and then place on a serving plate with ice cream or cream. 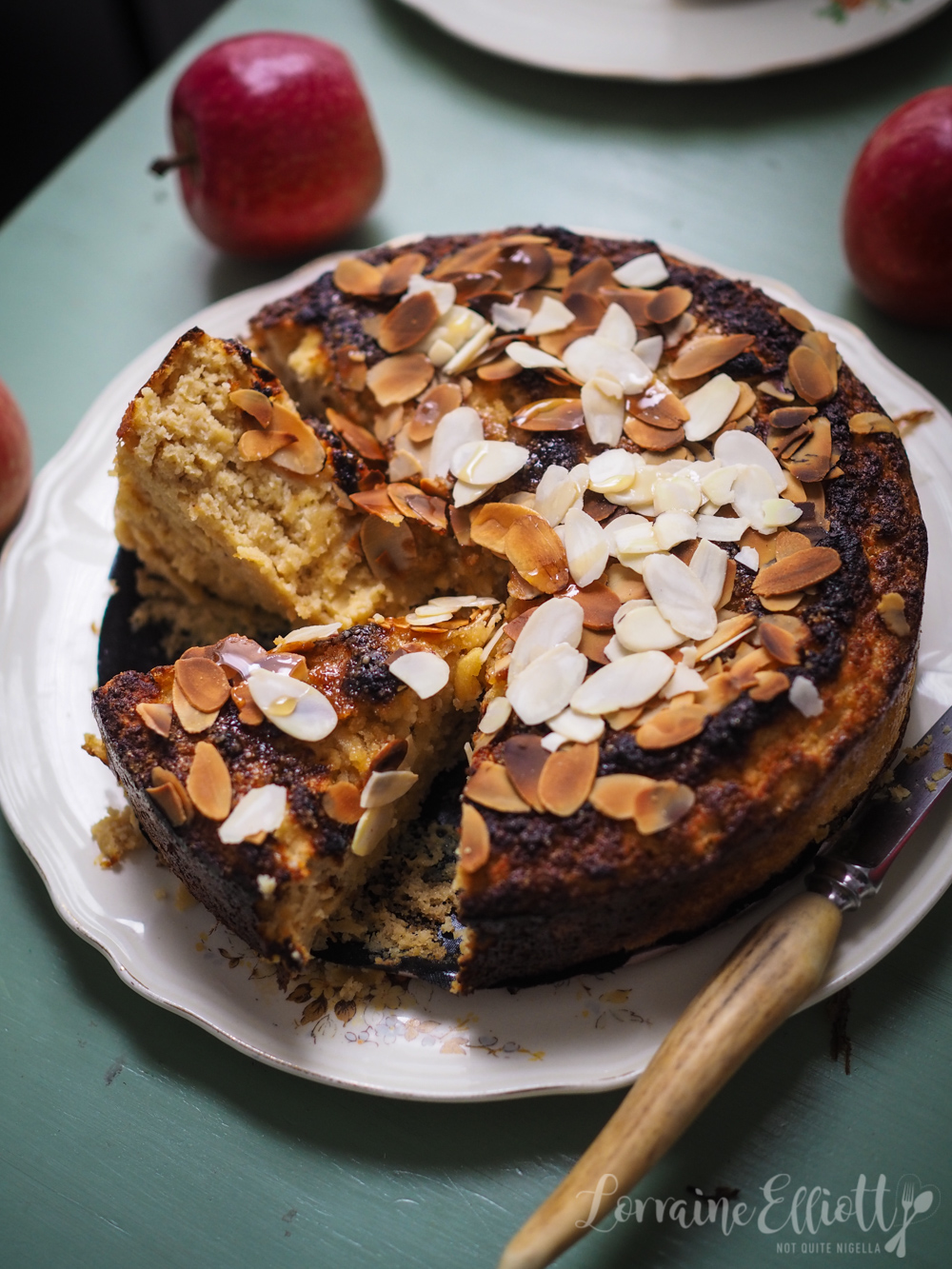