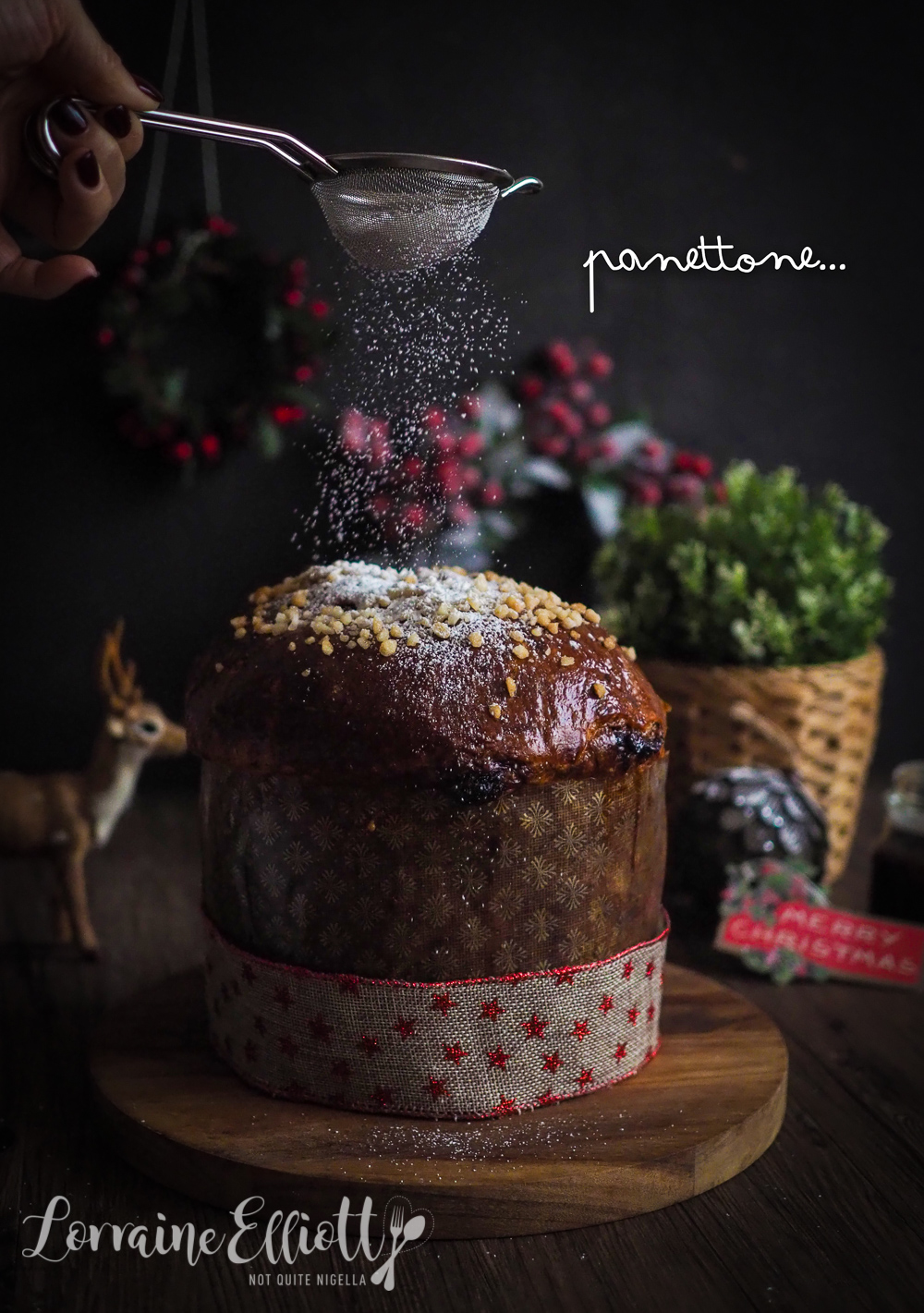 Panettone is the ultimate Christmas accompaniment. This Italian bread is studded with fruit and is sky high. Panettone hails from Milan and weighs around 1 kilo and is shaped in a cupola shape. But it can be intimidating. But with this recipe, you'll make a buttery delicious panettone that will change your life and start an obsession!

Panettone comes from the word paneto which means "small loaf cake" but adding the suffix of "one" changes it to mean large loaf cake. Non-Italians may be wondering what the fuss is all about with panettone. The first time I ever tried one I didn't understand what the big deal was about it as it tasted like stale fruit bread. But when I first tried a good panettone it was like the heavens opened up and I finally saw what everyone was talking about. It wasn't merely a Christmas decoration, it was fluffy, light and buttery as a brioche covered in sugar and studded with fruit. 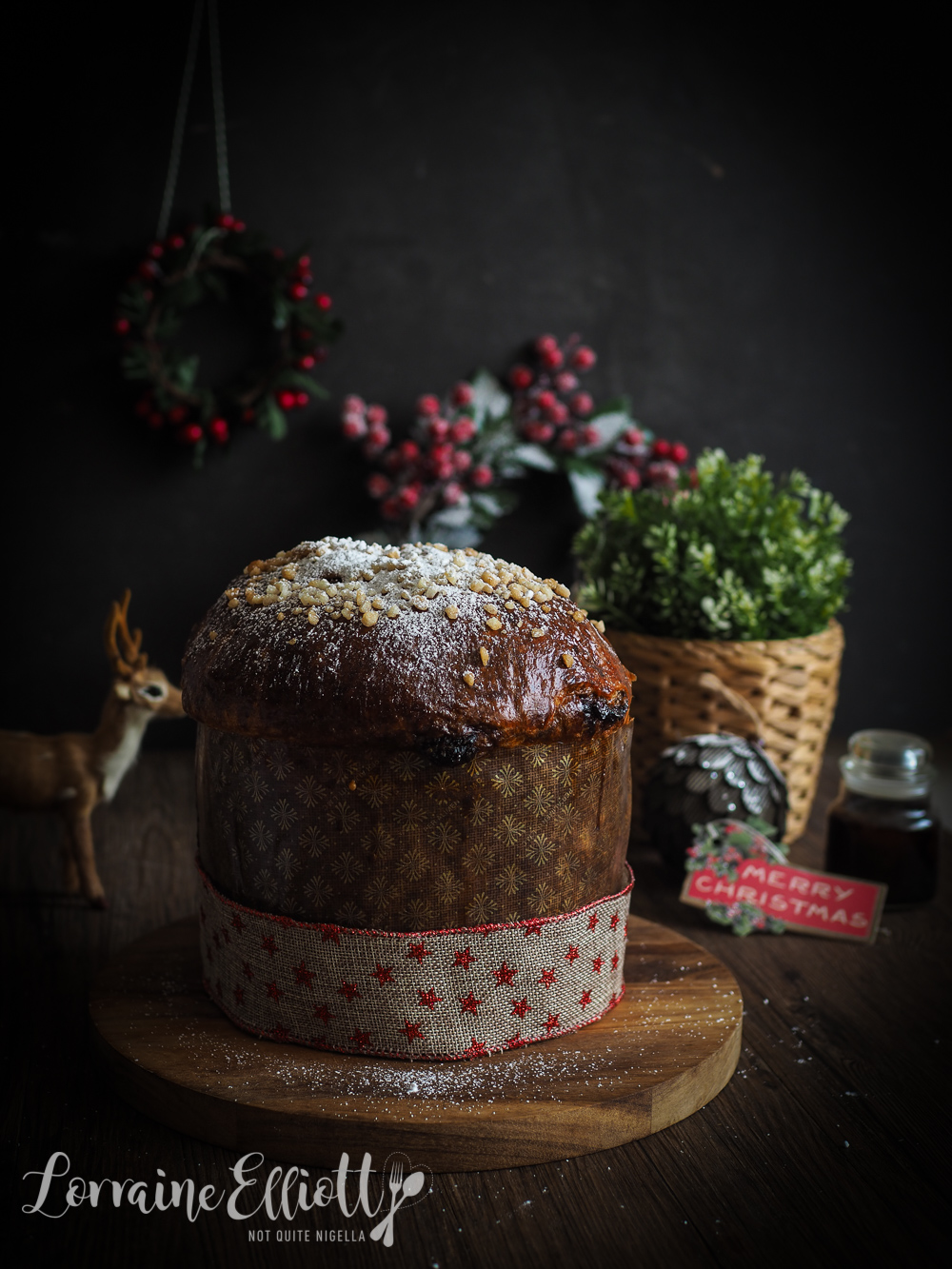 Price often dictates how you will find a panettone and in Australia, a panettone $50 or above usually gets you the object that starts obsessions. Less than that you'll perhaps be nonplussed and use it for French toast (here are some recipes for leftover panettone).

The process for panettone takes 2-3 days but they're not heavily active days (like say a French Bûche de Noël which should come with anti-anxiety meds). The first is to start the dough and knead the hell out of it and then it sits in the fridge overnight (or for two nights if you want). Then you bake it on the day but then hang it upside down to cool completely overnight. On the third day you feast on it. You can of course eat it on the second day as it will cool within a few hours. If you use sourdough there is an additional process to make the levain and make sure that it's well fed before using it so that adds an extra day.

There have been efforts to obtain Protected Designation of Origin (Denominazione di Origine Controllata – DOC) for the panettone but this has not happened yet. And although it hails from Milan in the Middle Ages, the ingredients for it did not hail originally from the place that it was first prepared. It was a luxurious item for Christmas. In some regions panettone is served with a mascarpone cream or a crema di mascarpone made with mascarpone, sugar and a little candied citron with egg whites used in some recipes. 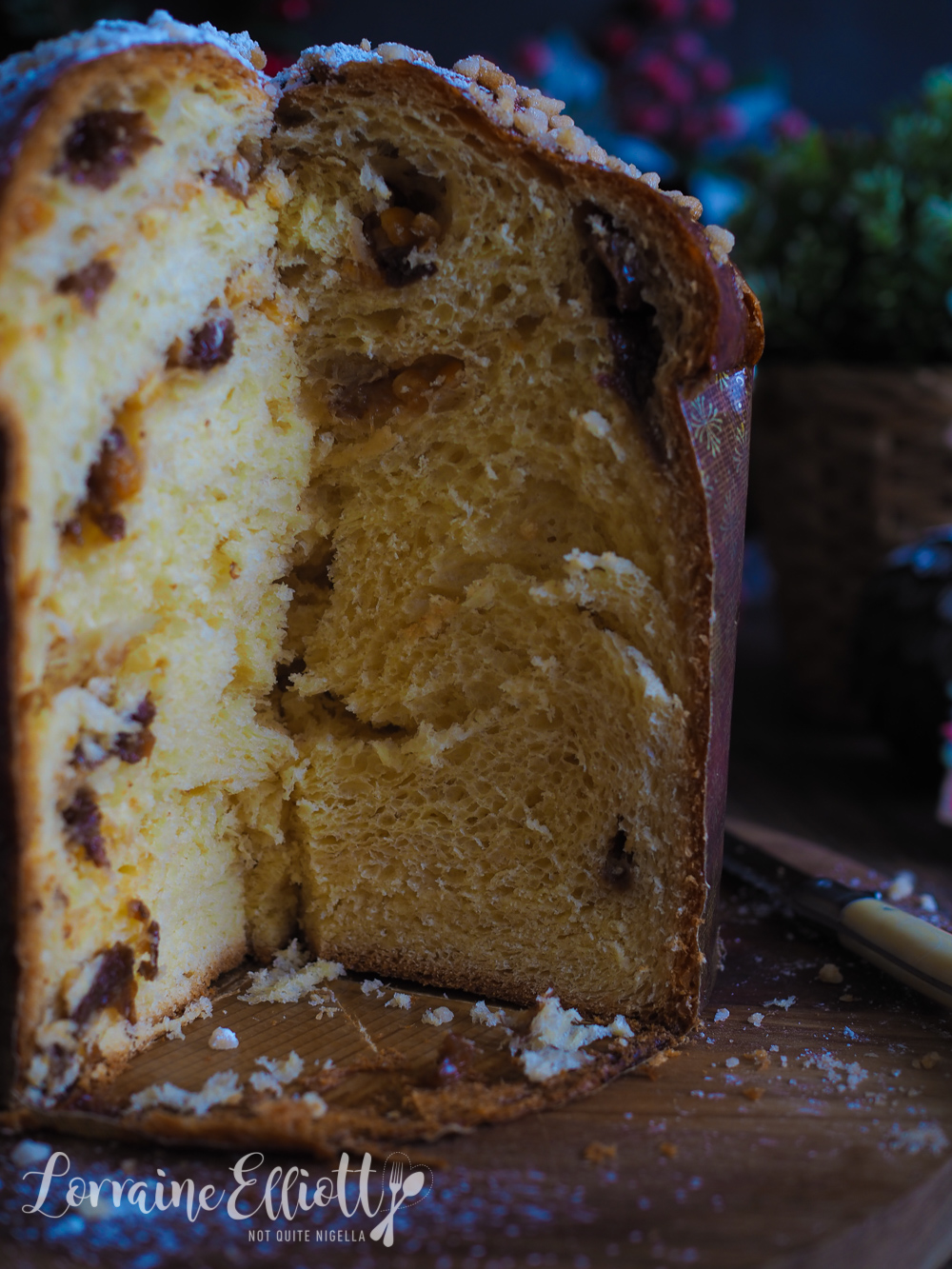 I was determined that I had to give panettone a go this year. I wanted the challenge as 2020 was not going to control or cower me. I made this attempt a few times, the first turned out more like a fruit bread as I added lots of spices and didn't use the panettone mould as I wanted to see if it could be done.

It was tasty but I knew what I had to do. I used my tangzhong brioche recipe, pretty much to the letter, just adding soaked dried fruit. Panettone recipes are pretty much identical to brioche recipes so it wasn't a crazy change and at least I knew that I'd get a high rise and buttery texture. Italians, please forgive the use of tangzhong, it is merely to extend its life and make sure it us downy soft. And after a month of eating panettone (a food version of My Year of Living Dangerously), I am so excited to share this recipe with you!

I gave some to my home made panettone to my friend Monica, the most passionately Italian person I know and a chef and she messaged me. "Wait, was the panettone you gave me the home made one?". When I told her it was she said, "Oh my god girl that’s INSANE. ITS PERFECT. Hun it's legit," which felt like I was being blessed by the pope. 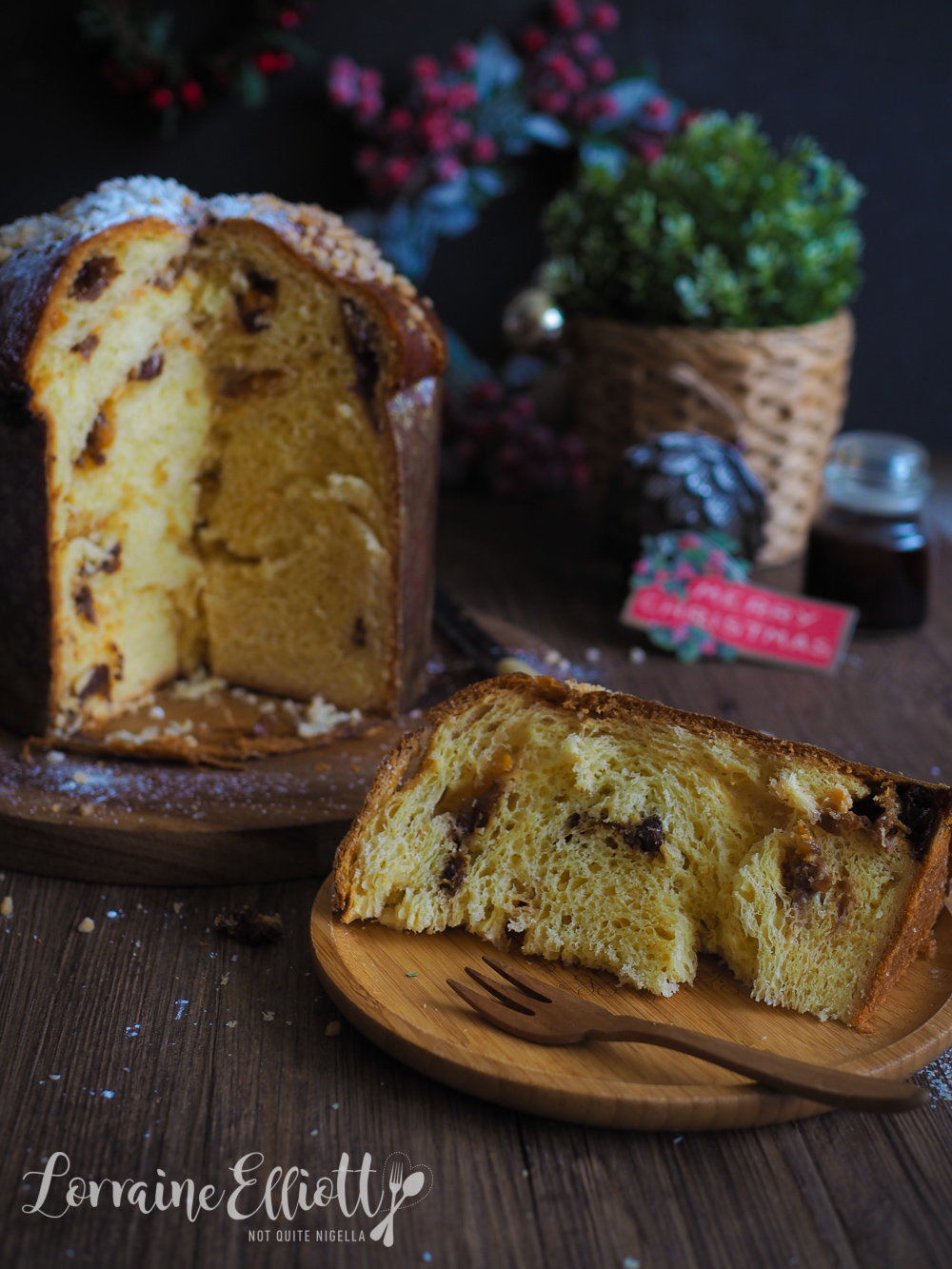 Tips for making panettone at home:

1 . First start with getting a panettone mould. These can be tricky to find but they are stocked at Skorin Deli in Concord who sell paper and metal panettone moulds. I recommend getting the paper mould because that way the panettone can be easily hung upside down after baking. They also sell the mixed peel that you combine with the raisins for the fruit. 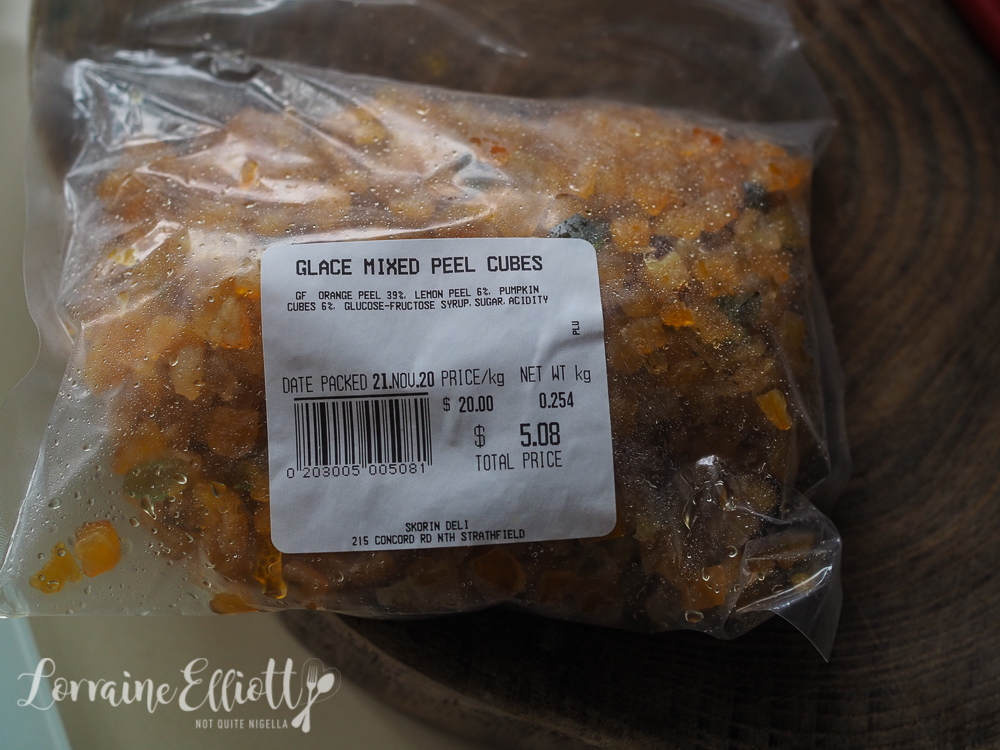 2 . You need to use the correct type of flour for this. You want a medium to high protein flour for this which is called "Baker's flour" or "bread and pizza flour". Panettone's height is from the structure that forms when the gluten is worked so you knead the bejeezus out of that dough to create the gluten strands. If you can get a hold of high protein flour (13.5-15%) use that but it is hard to find in Australia so medium protein or 9.5-10.5% protein is often used here.

3 . Panettone is usually made with a sourdough starter but as you may know, I've sworn off sourdough making because I can't keep a starter alive so you can do this with instant dried yeast and it worked well. You can also use a sponge or sourdough and I have found sourdough produces bigger bubbles. I've included sourdough instructions below.

4 . Traditionally the fruit is unsoaked but I soaked mine so that the fruit doesn't dry out the dough by soaking up any moisture.

5 . Baking the panettone for the right amount of time is key. You don't want to over cook it but you also don't want to undercook it. Over time and over many panettone (and I feel like this might become a Christmas tradition for me I loved it so much) you'll get to know your oven as every oven is different. Also the tangzhong helps to keep the moisture in too so that it doesn't dry out.

6 . Hang the panettone upside down when it cools. It sounds kinky but it's not worth skipping this step after you've gone to all the time and trouble. It means that the bread won't collapse into itself and you get that lovely high rise (mine was 20cms/8inches tall). 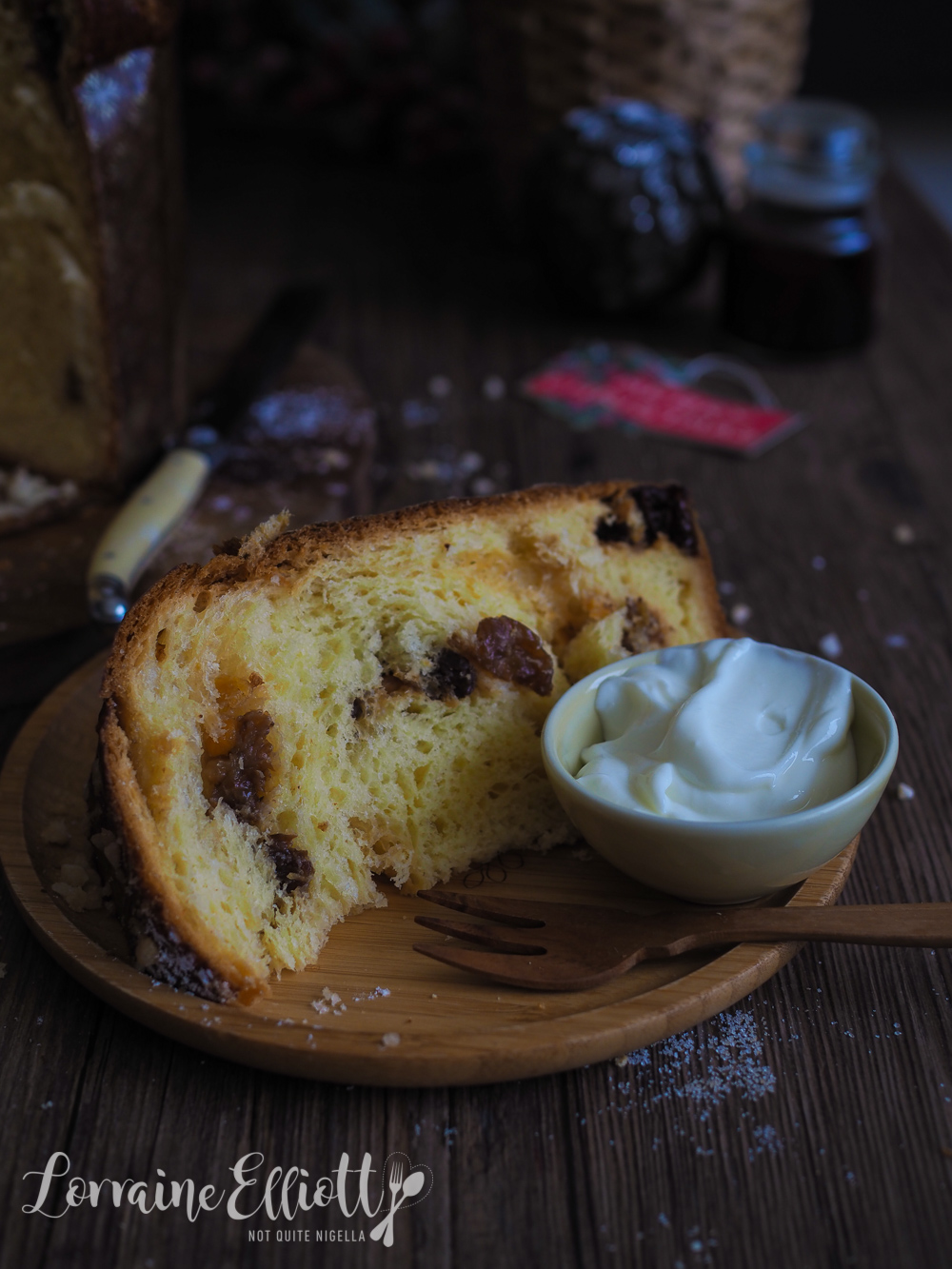 Do you know the Baader-Meinhof phenomenon or the frequency illusion where you think you hear about something all the time because it is front of your mind? Well this year definitely felt like The Year of the Panettone. Everyone was talking about it. Or so it felt like it to me.

My friend Carm is selling and delivering fancy panettones from Dolce & Gabbana and she gifted me a massive panettone as well as a baby one that we will eat at Christmas. When she came by to deliver it I was about to embark on my home made panettone quest and asked her for advice on how to make panettone.

"My best advice, BUY ONE," she said laughing.

Only the less foolish would listen. Happy year of the panettone!

So tell me Dear Reader, how do you feel about panettone? Have you ever made one? 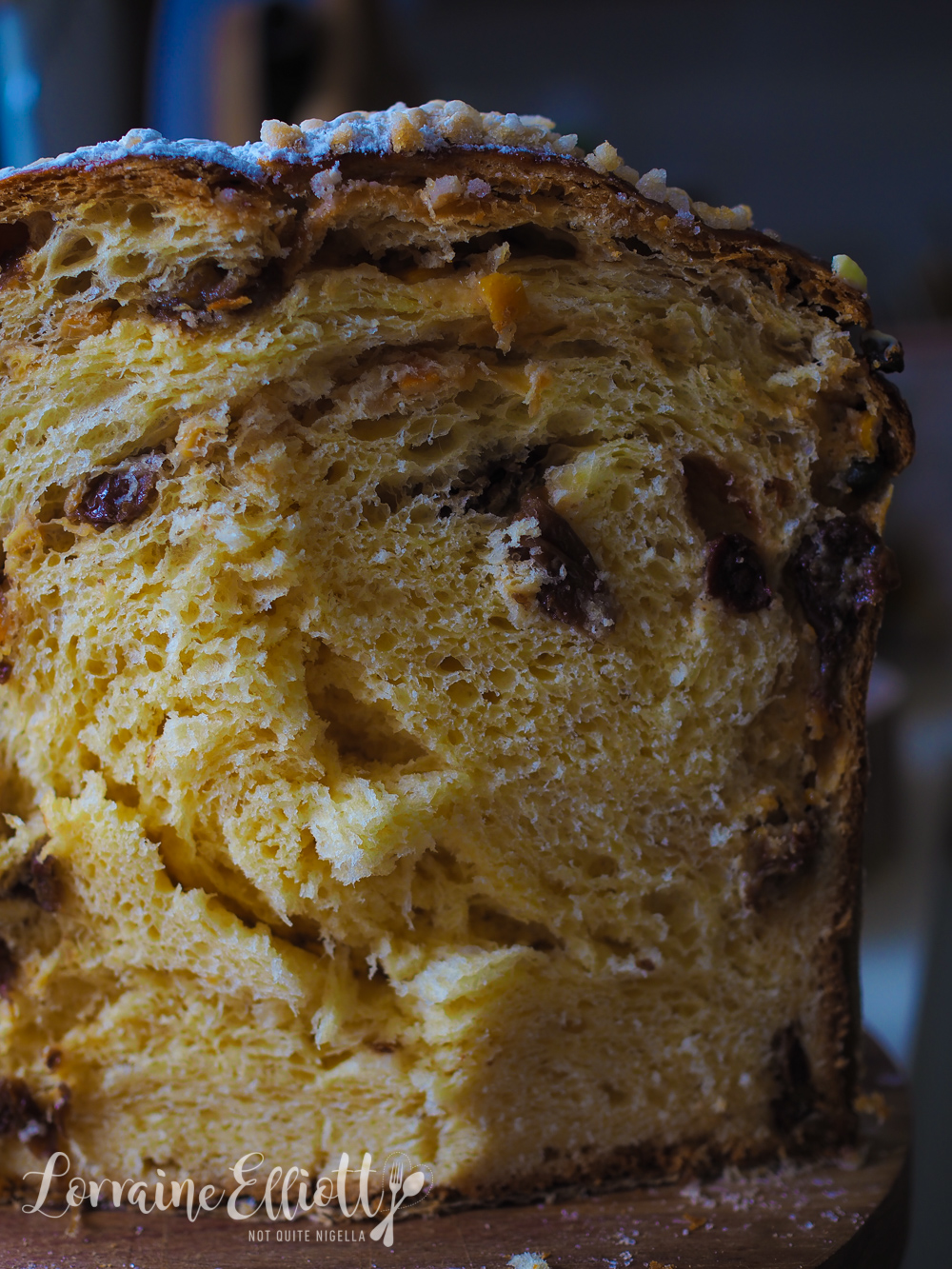 For panettone's tall structure you do need at least a medium protein flour with 10% protein. This is called baker's flour or bread and pizza flour and can be found at the supermarket and at specialty stores.

Sourdough instructions: If you are using sourdough, start this the night before, 3 days ahead. Mix 50g/1.7ozs starter, 50g/1.7ozs bread flour and 50g/1.7ozs water to make a levain. Then use this 150g levain instead of yeast.

Step 1 - First soak the fruit in hot water. Cover and set aside.

Step 2 - Take 1/6 cup of the total weight of flour and whisk with the milk, vanilla and salt in a small saucepan. Heat on a low medium heat and switch to a silicon spatula. Stir to make a roux until it reaches 65C/149F. Remove from the heat and whisk in the eggs. 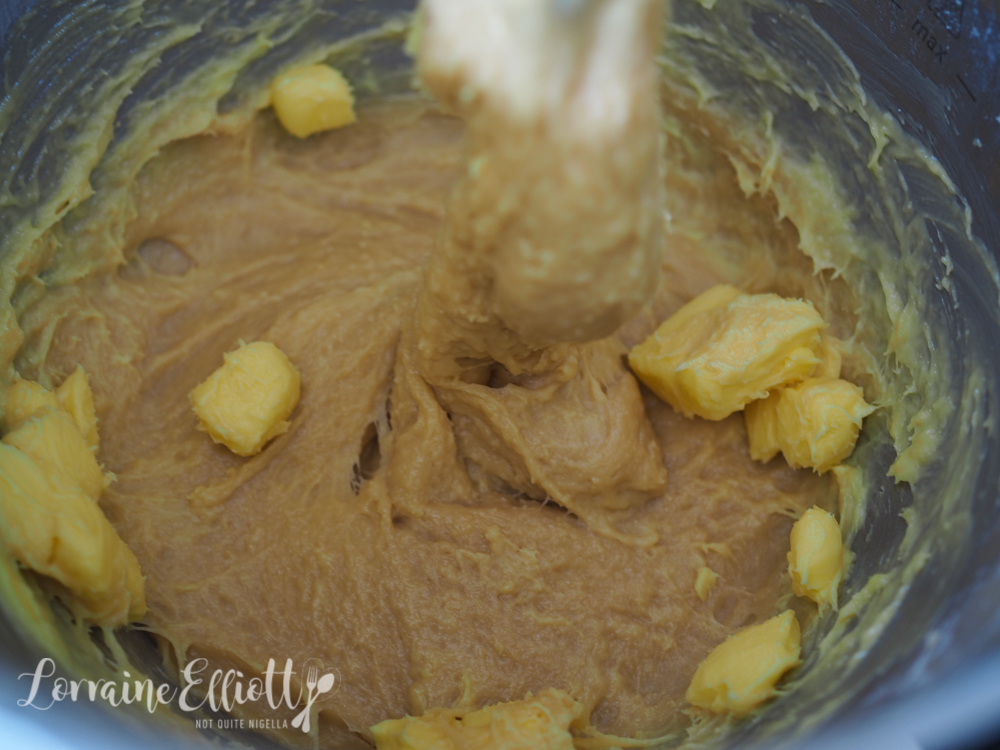 Step 4 - Set this to knead for 10-12 minutes on low speed. Then add the butter a few cubes at a time increasing the speed to a bit higher (say 4 out of 10 where 10 is maximum speed). You do this to work the gluten and knead it for up to 20 minutes until the butter is well combined and the dough pulls away from the sides. 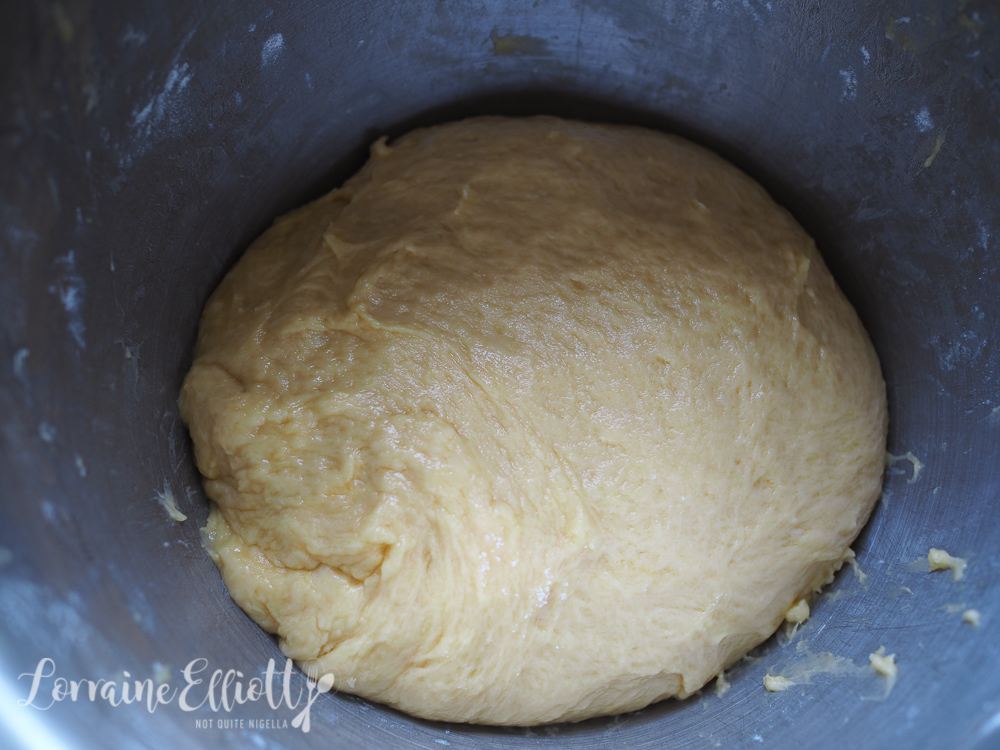 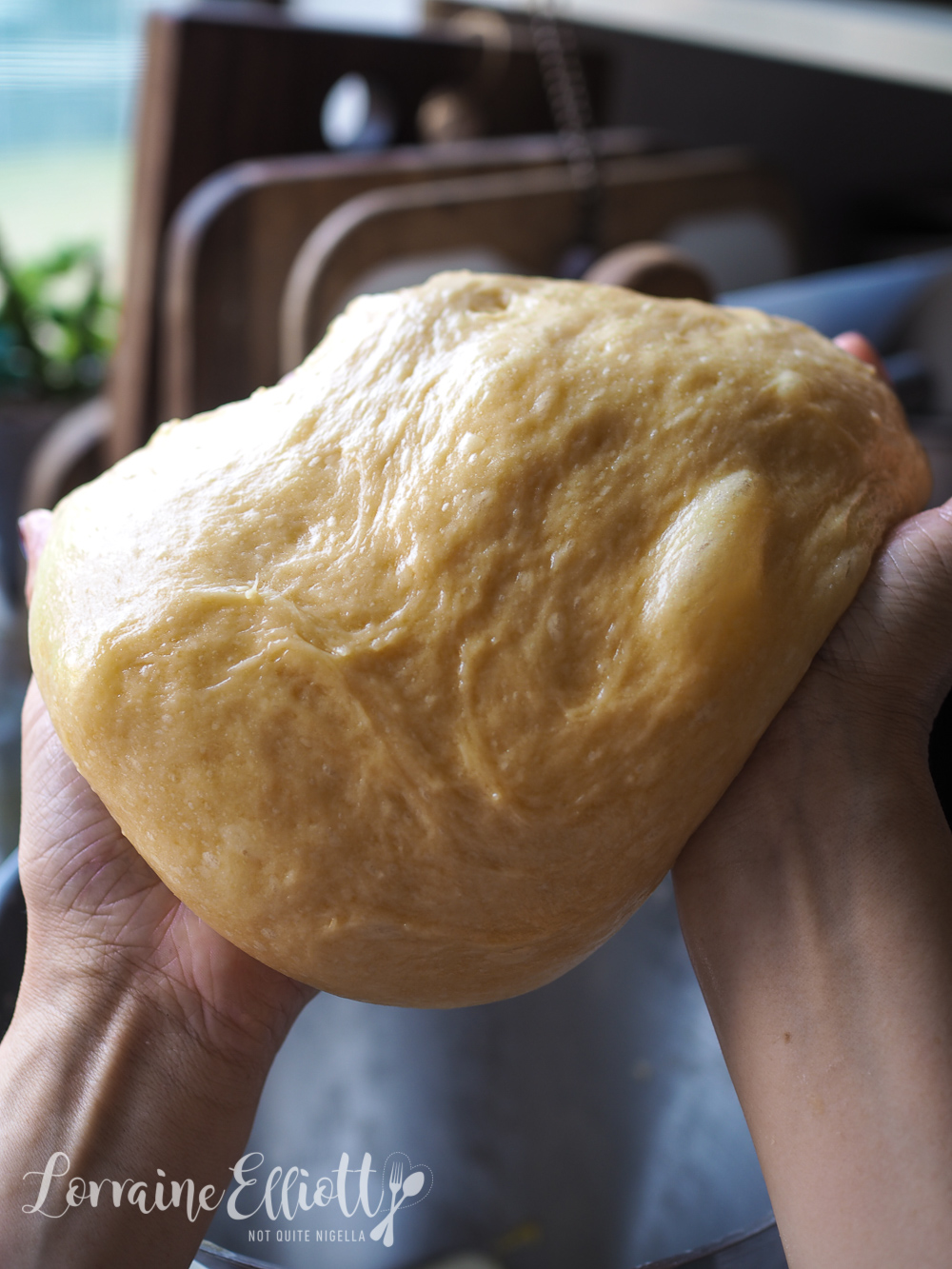 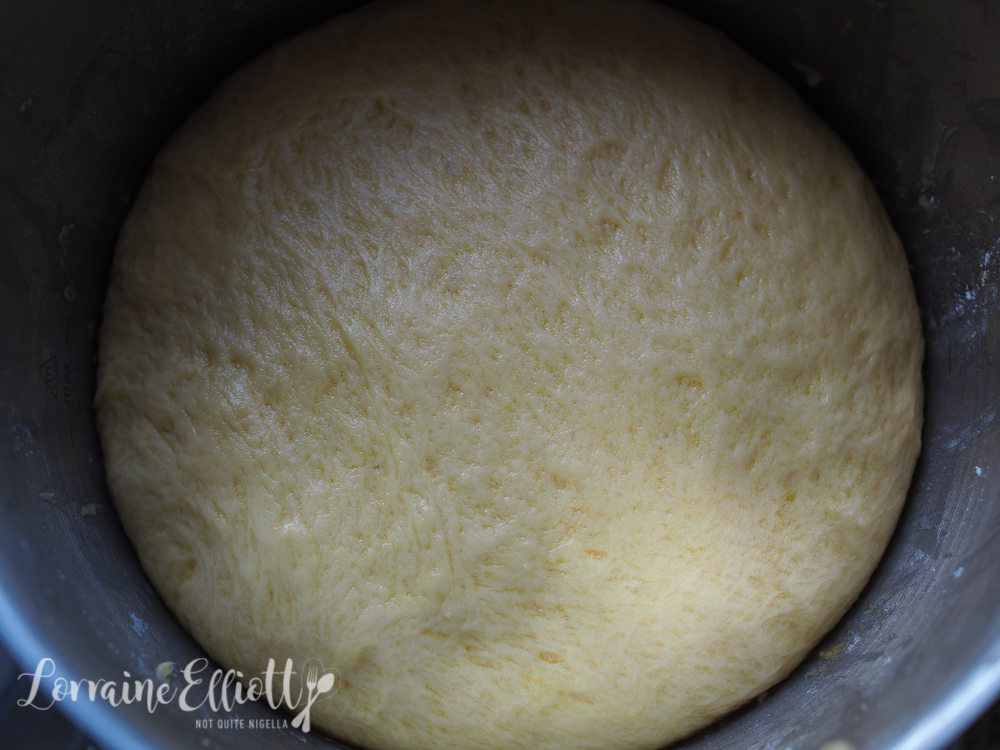 Step 5 - Grease a very large bowl and scoop this very wet and sticky mixture into the bowl. Cover and refrigerate overnight (or for 2 nights where it will develop an even better flavour if you have time). 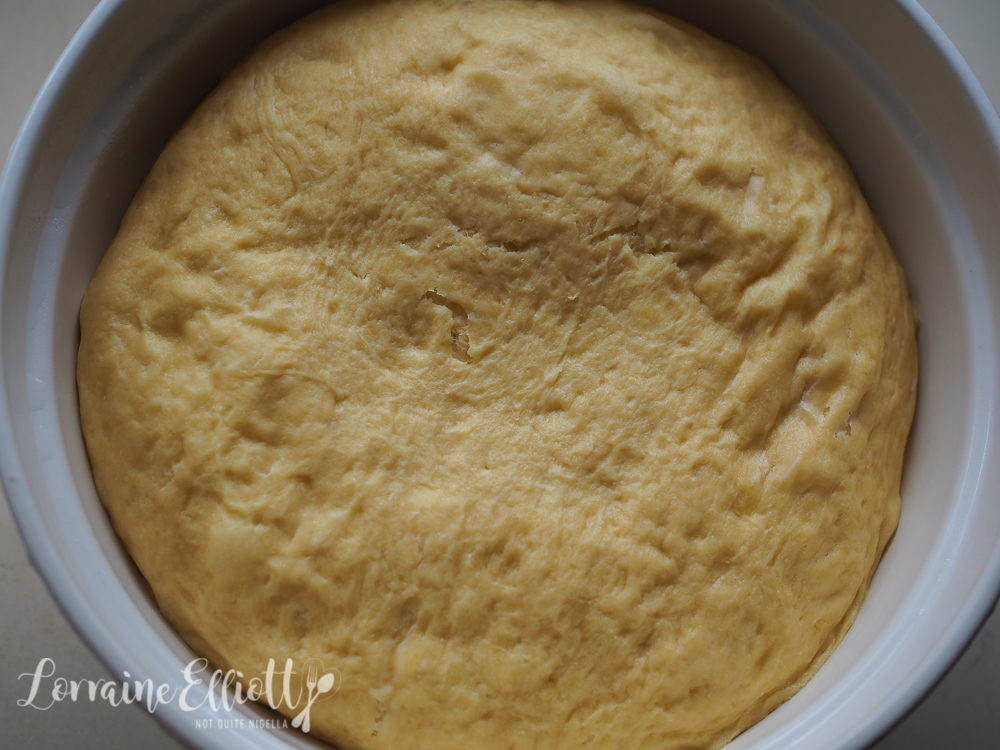 The dough the next morning 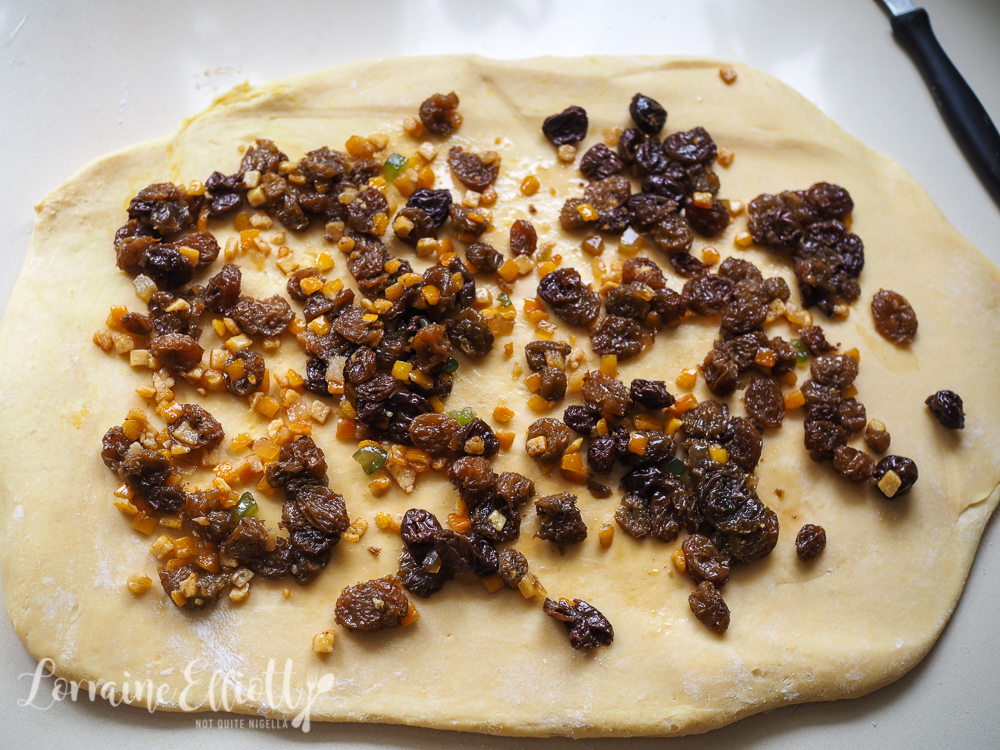 Roll out into a rectangle and scatter the fruit 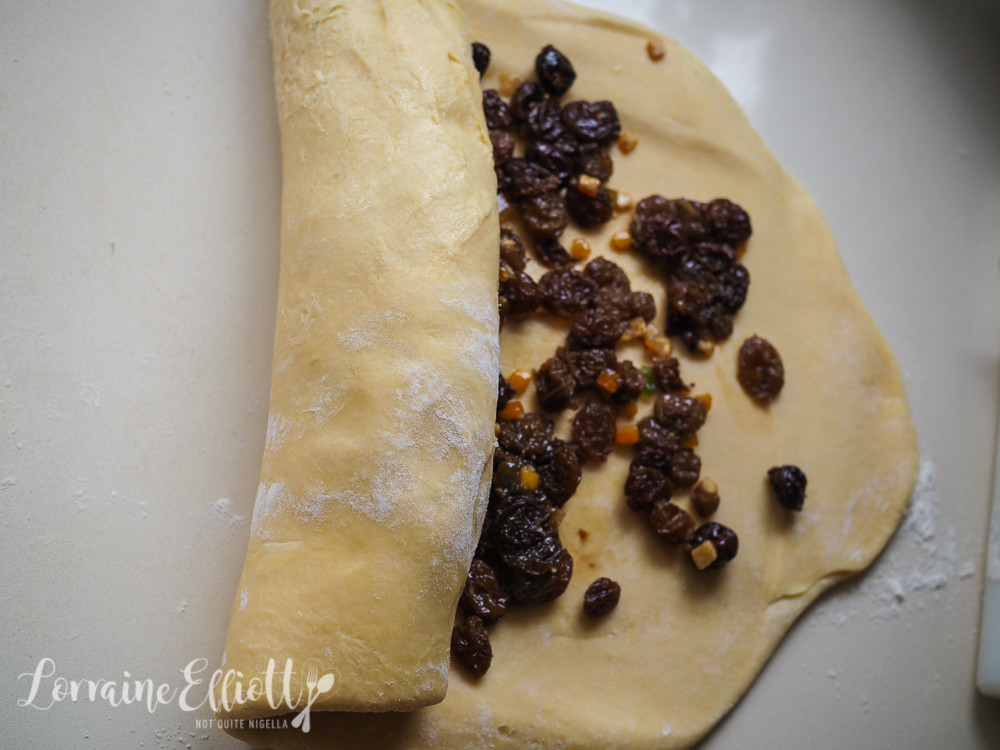 Step 6 - The next day drain the dried fruit well. Then take the dough out of the fridge and flour a surface. Roll out the dough to a rectangle around 20x30cms/8x12 inches. Spread the fruit across the dough leaving a 1 inch border and then roll the dough up from the shorter end. Press down on the dough and then fold into thirds where you will end up with a square. 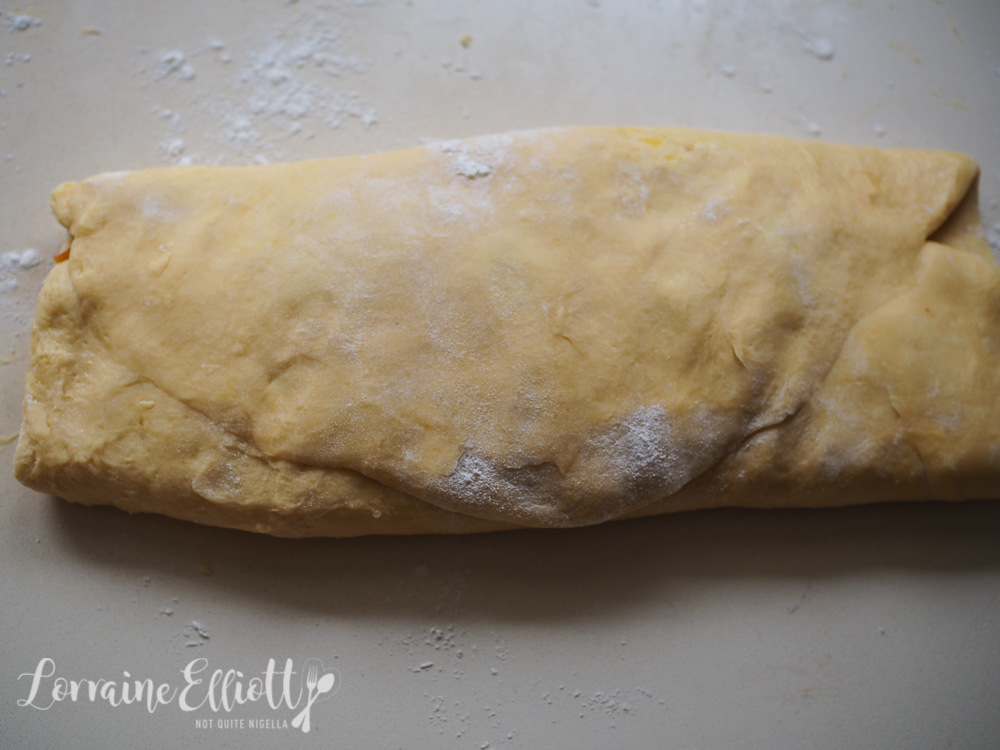 Then flatten with the palm of your hand 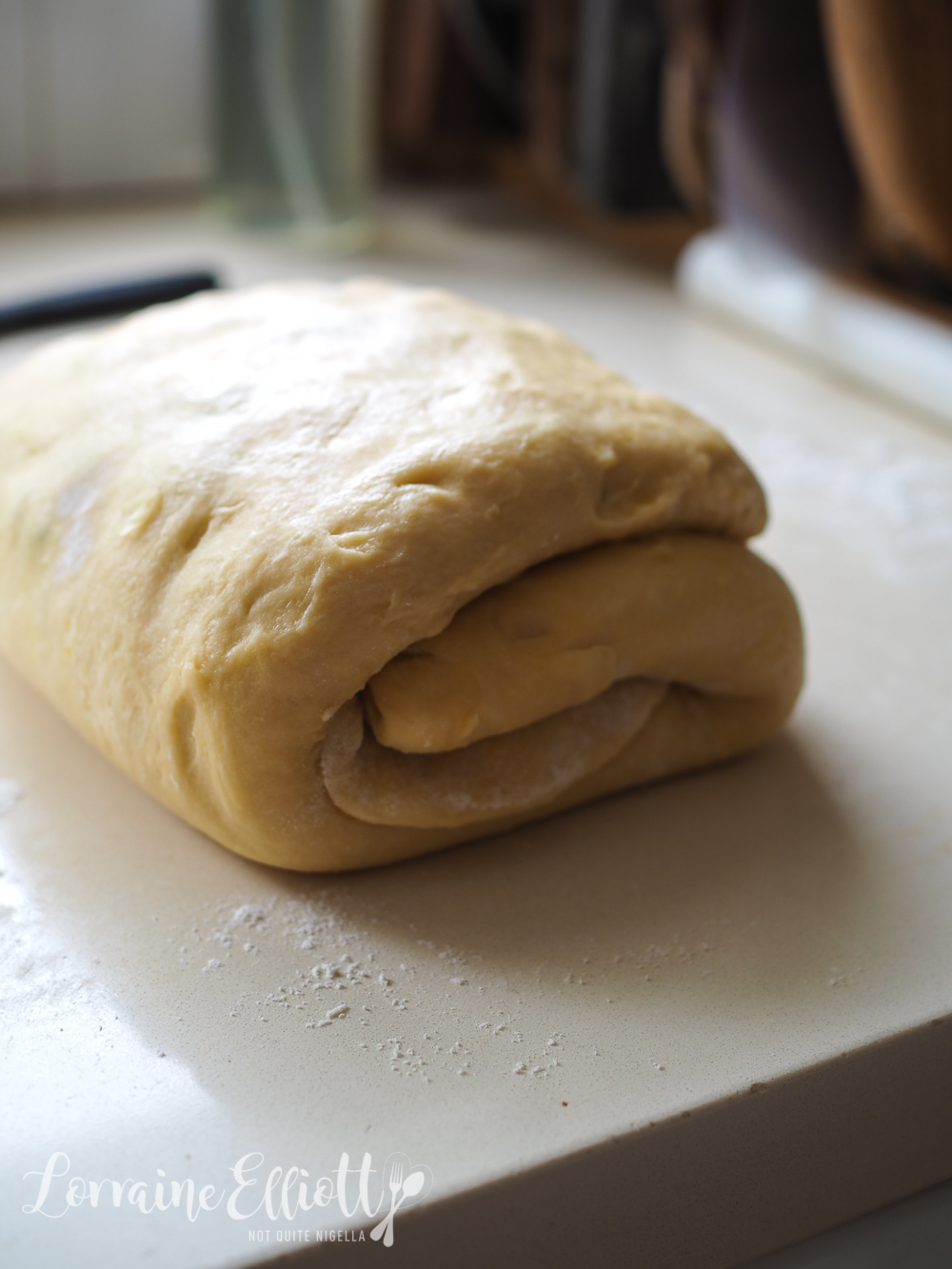 Step 7 - Flour the surface again as it will start to warm up and it is very buttery, and then shape it into a ball making sure there are no cracks on top. 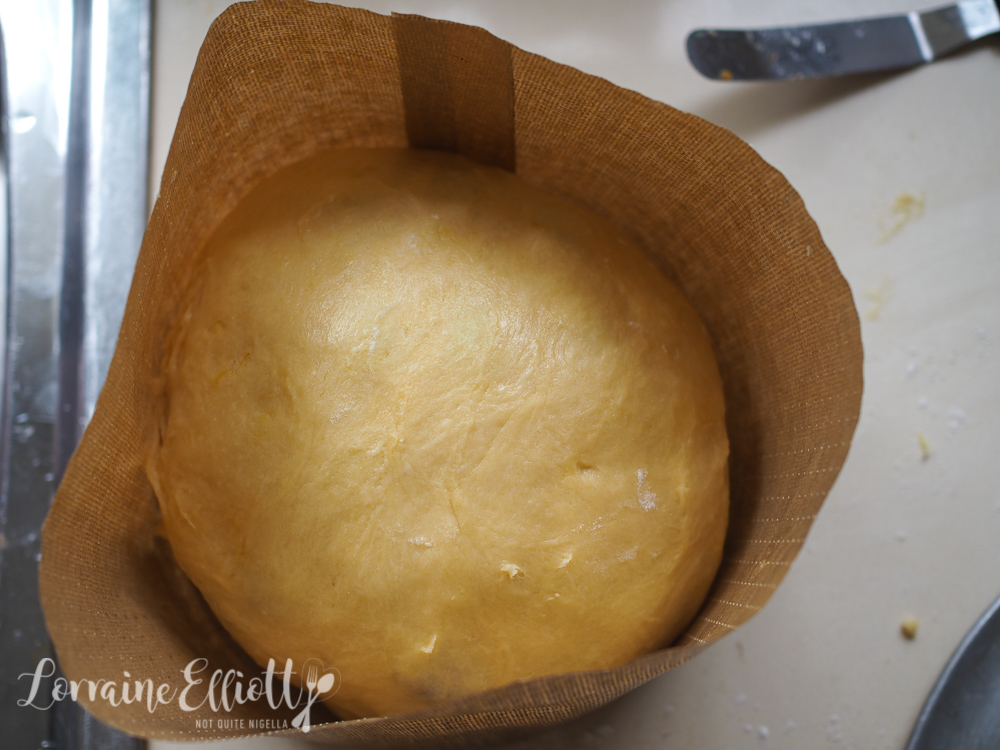 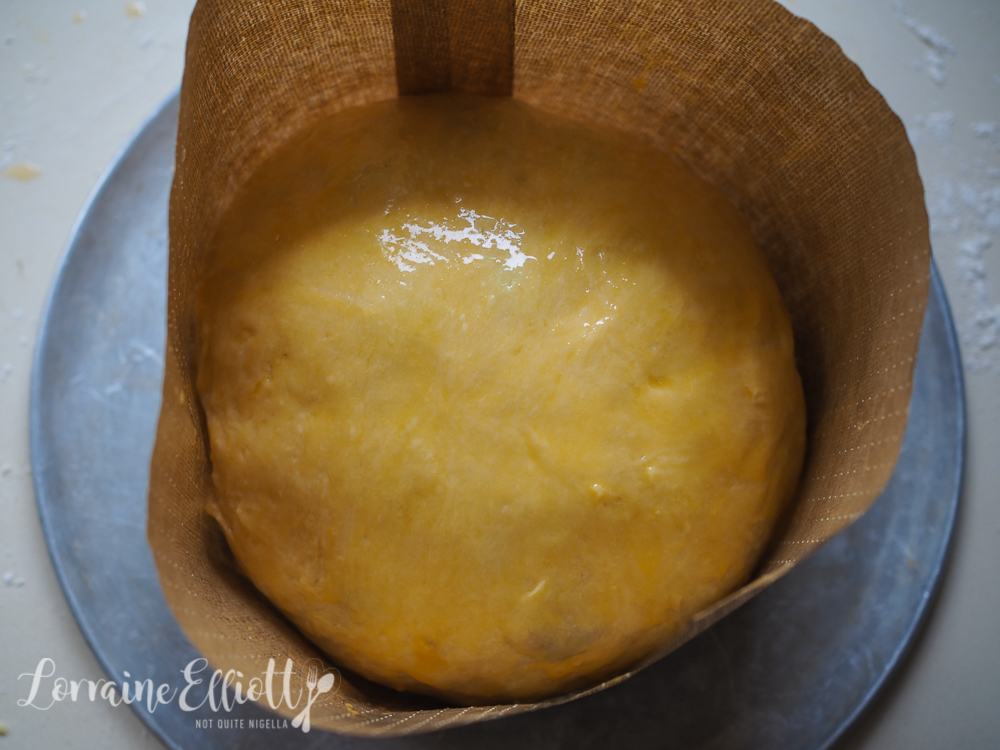 Step 8 - Spray the panettone mould with oil and place the dough inside it. Brush with the egg yolk glaze and allow to rise for 3 hours. I went out Christmas shopping and it had already extended beyond the collar. Score the top with an X with a sharp knife cutting it to the edges and then glaze again with egg and then sprinkle with the pearl sugar. 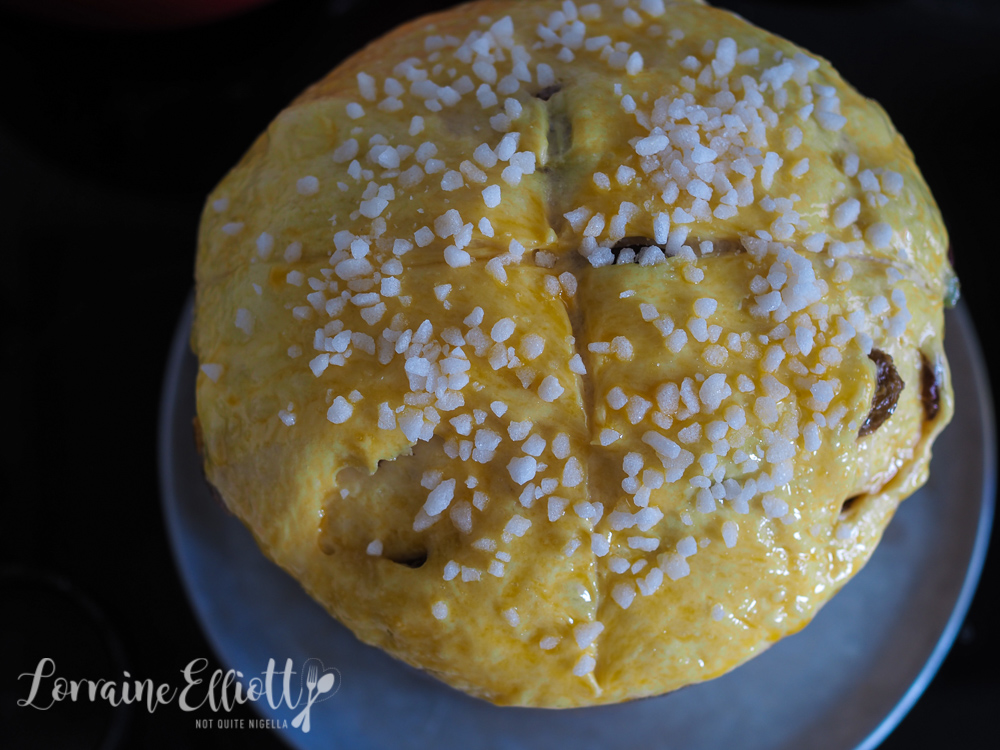 After 3 hours brush with more glaze, score a cross on the top and sprinkle with pearl sugar 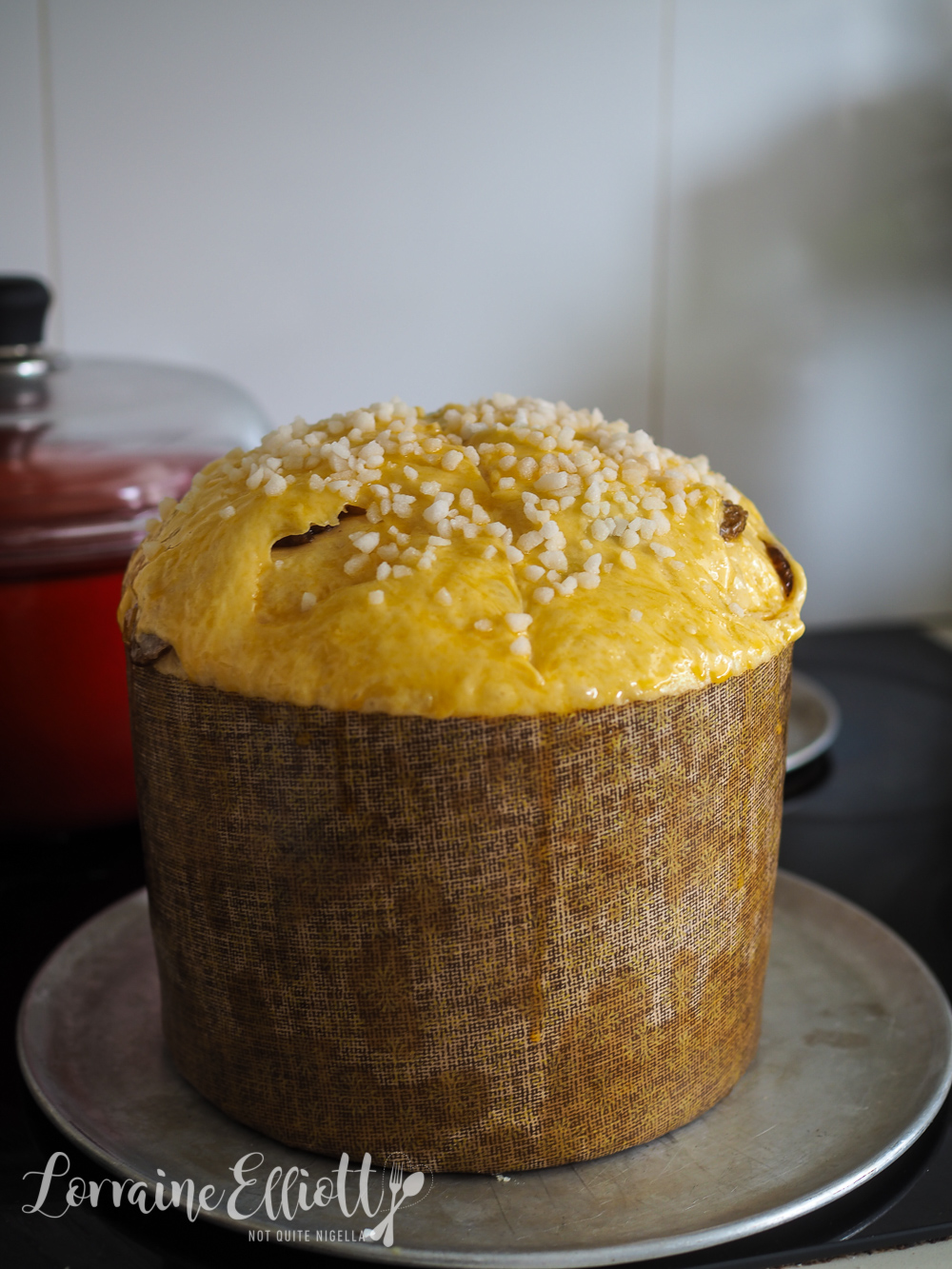 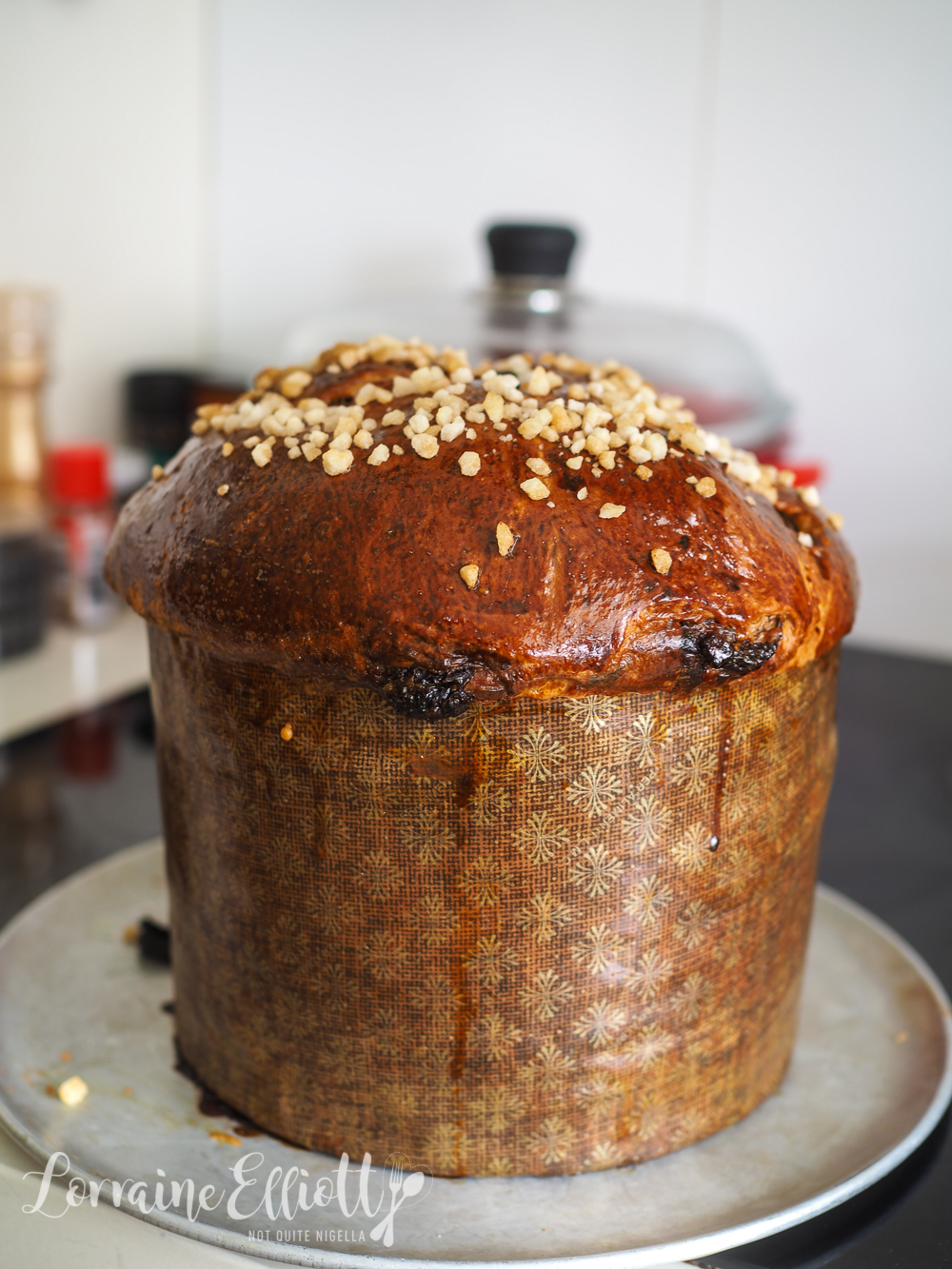 After panettone is baked

Step 9 - Bake in a 160C/320F oven for 30 minutes. Then cover with a sheet of oiled foil and bake for another 45 minutes. As soon as it is out of the oven, stick two long skewers in the base of the panettone and then hang upside down (I hung it between two chairs) and allow it to cool completely. 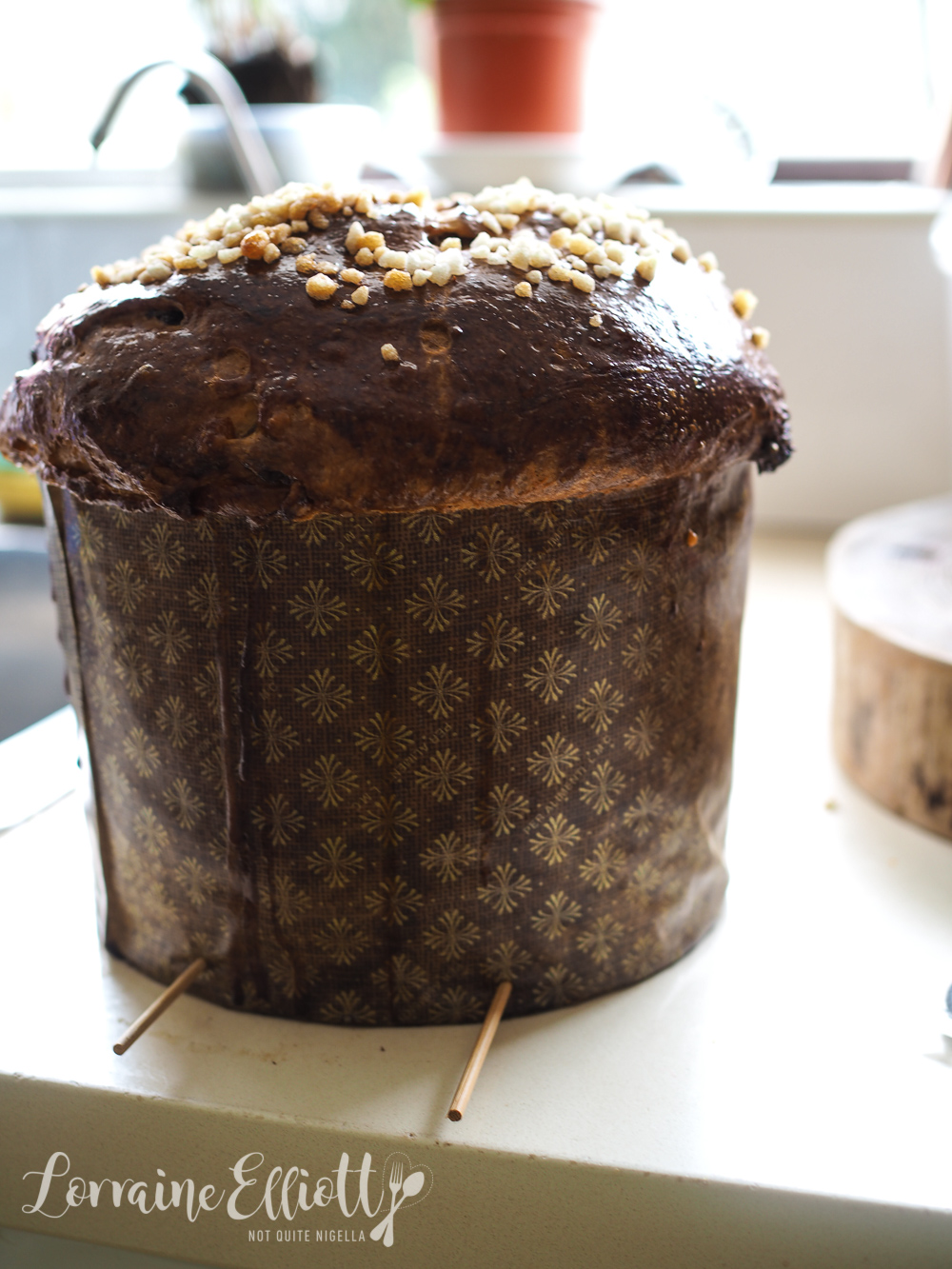 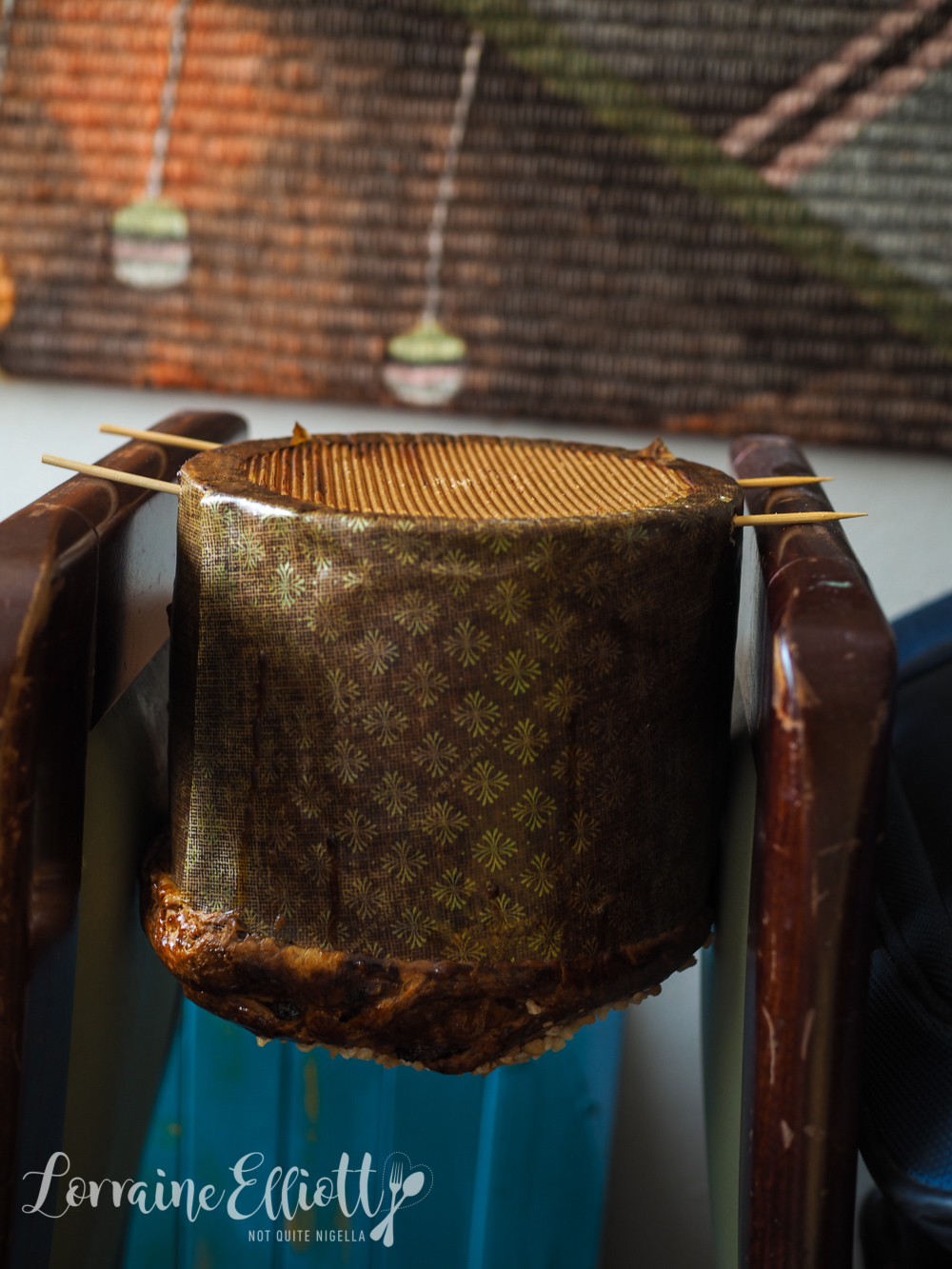 Then hang upside to completely cool 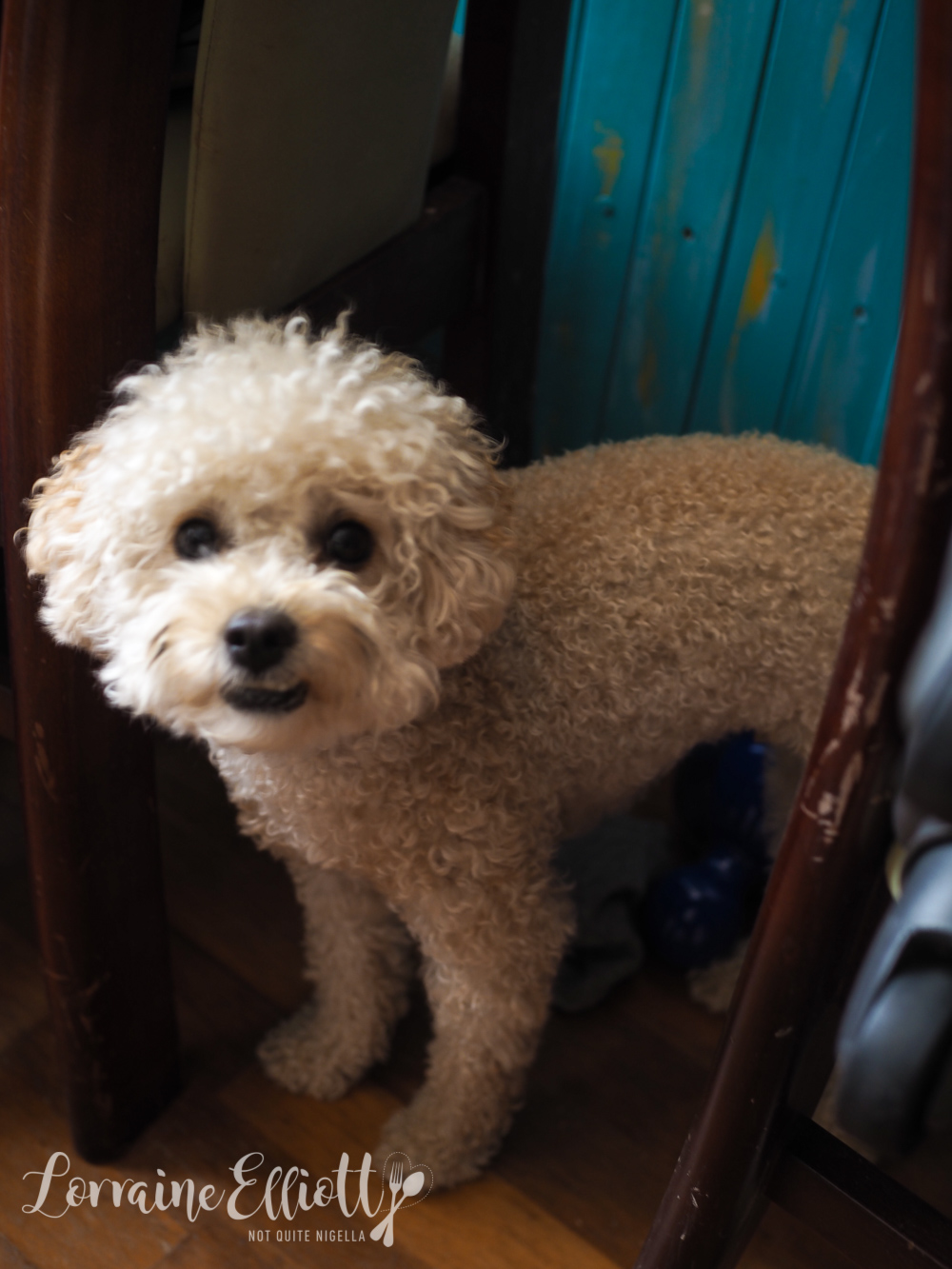 I thought I cleaned up all the pearl sugar but Teddy found some!

Step 1 - Whisk the icing sugar with the mascarpone and stir in the candied peel or vanilla.