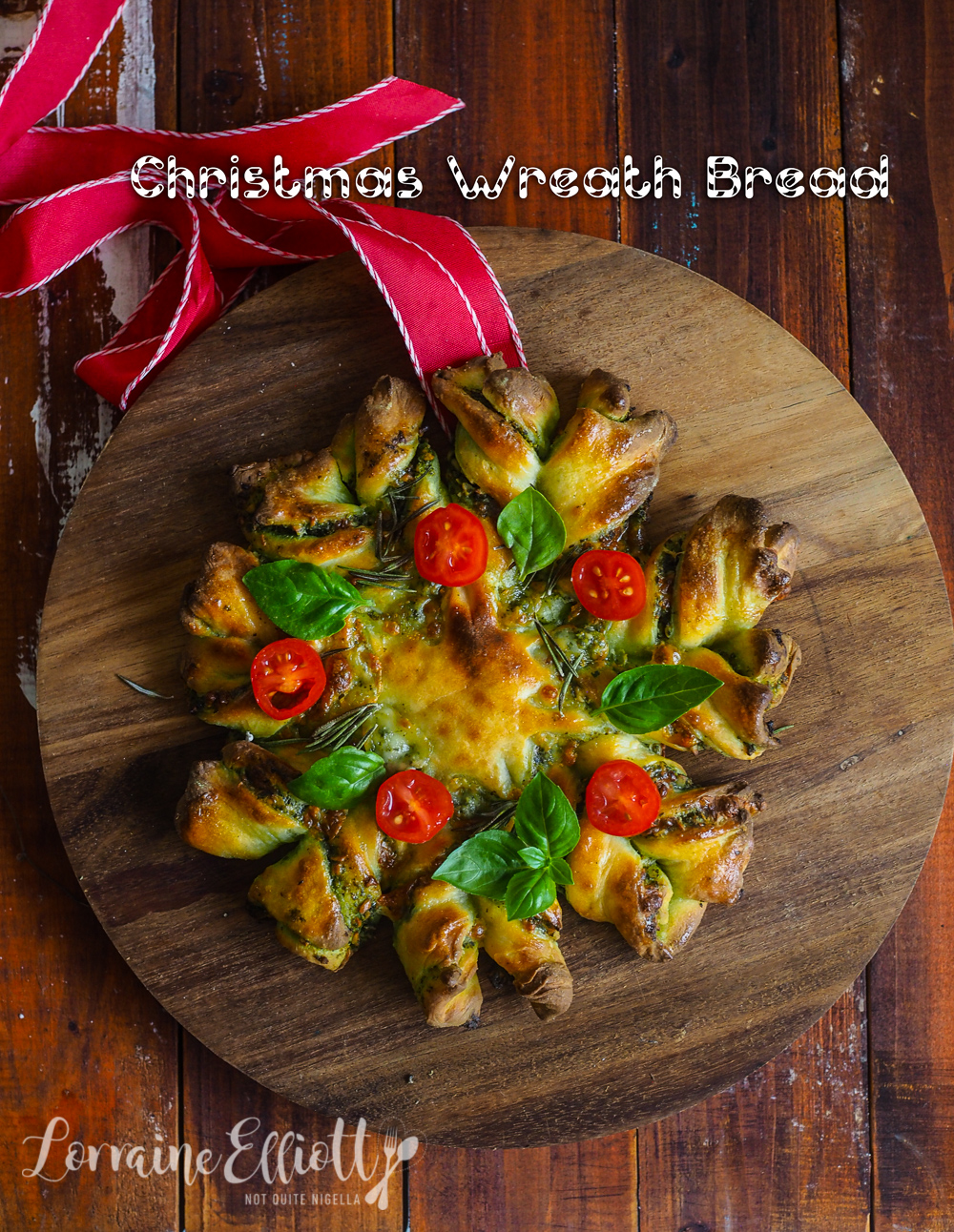 One recipe - two amazing breads! Dear Reader, this is one of the most exciting and easiest things to make this Christmas! A delicious, soft bread shaped in both a Christmas tree and then a pretty wreath using the scraps! The bread mixture is based on a super simple pizza dough using just two ingredients and the whole thing is such a cinch it will be our secret about how simple this is! 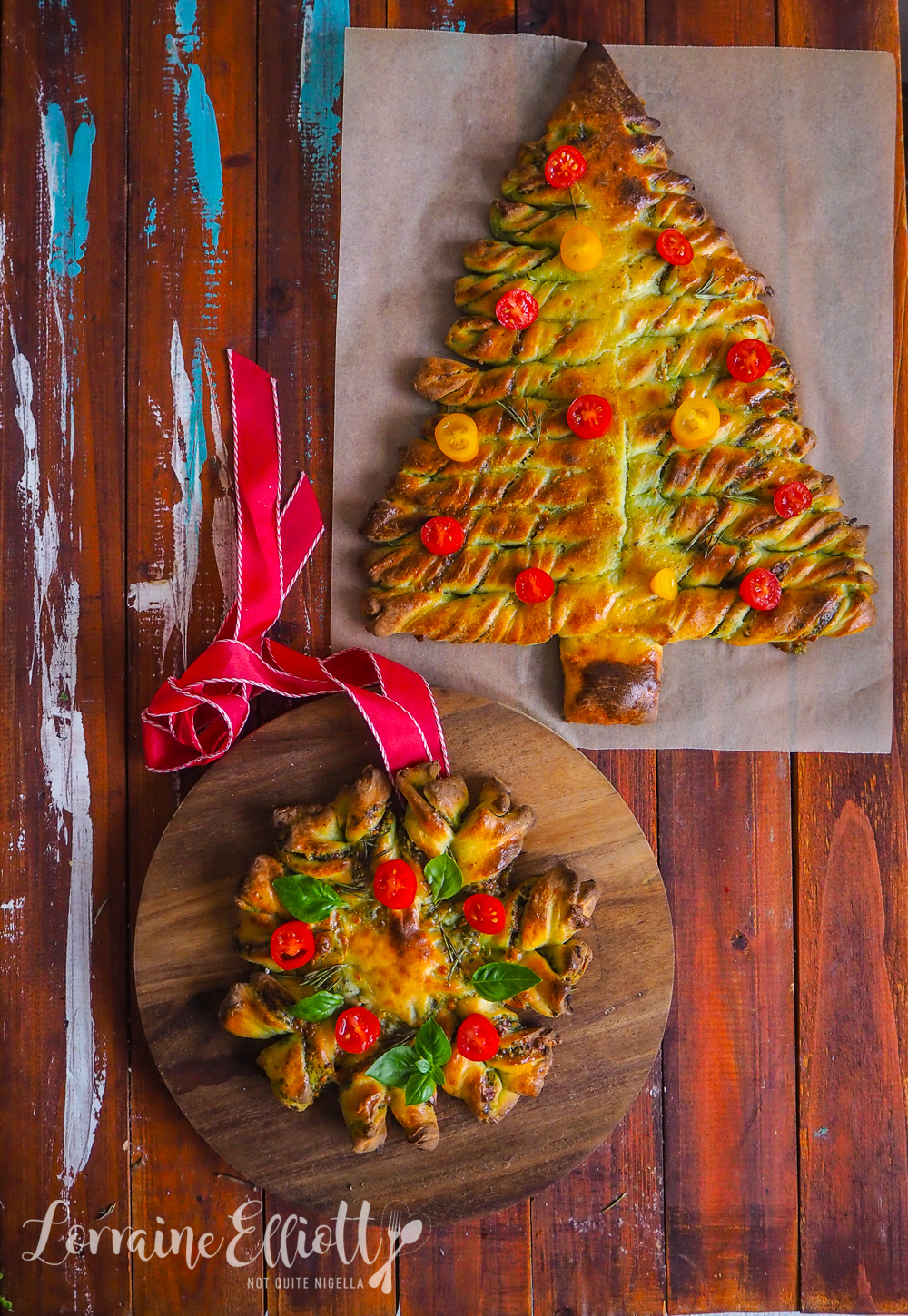 I've seen this idea on lots of American blogs but they all used pre-made crescent or croissant dough. We don't really have the same sort of dough here - sure there is puff and shortcrust pastry but I wanted to make it more a pizza so that it could be served with Christmas lunch or dinner.

Enter the fantastically simple two ingredient pizza dough hack using self raising flour and natural yogurt! There's no need to wait for the yeast to activate, you can get these both done in record time! Everyone can grab a piece of soft bread and it goes with pretty much everything. I also made this ahead of time, froze it and will warm it up just before dinner and serve it warm. 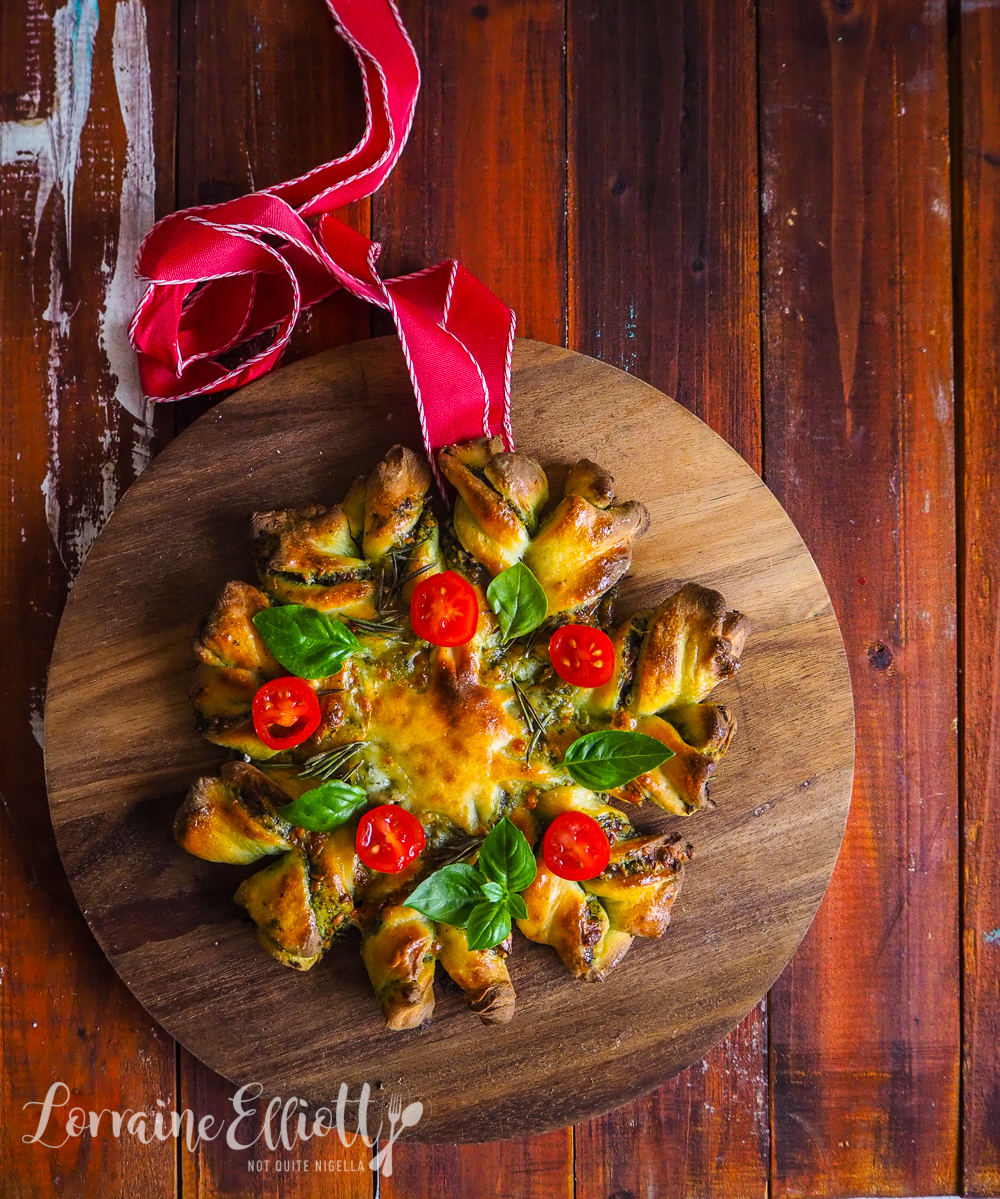 I want to say thank you for all the lovely messages about my father's recent stroke. He has been busy reading all the comments from his hospital bed and loves seeing them. I've had a few of you ask me about how his progress. He was moved from ICU to the Acute Stroke Ward to Neuroscience ward which is all good news. 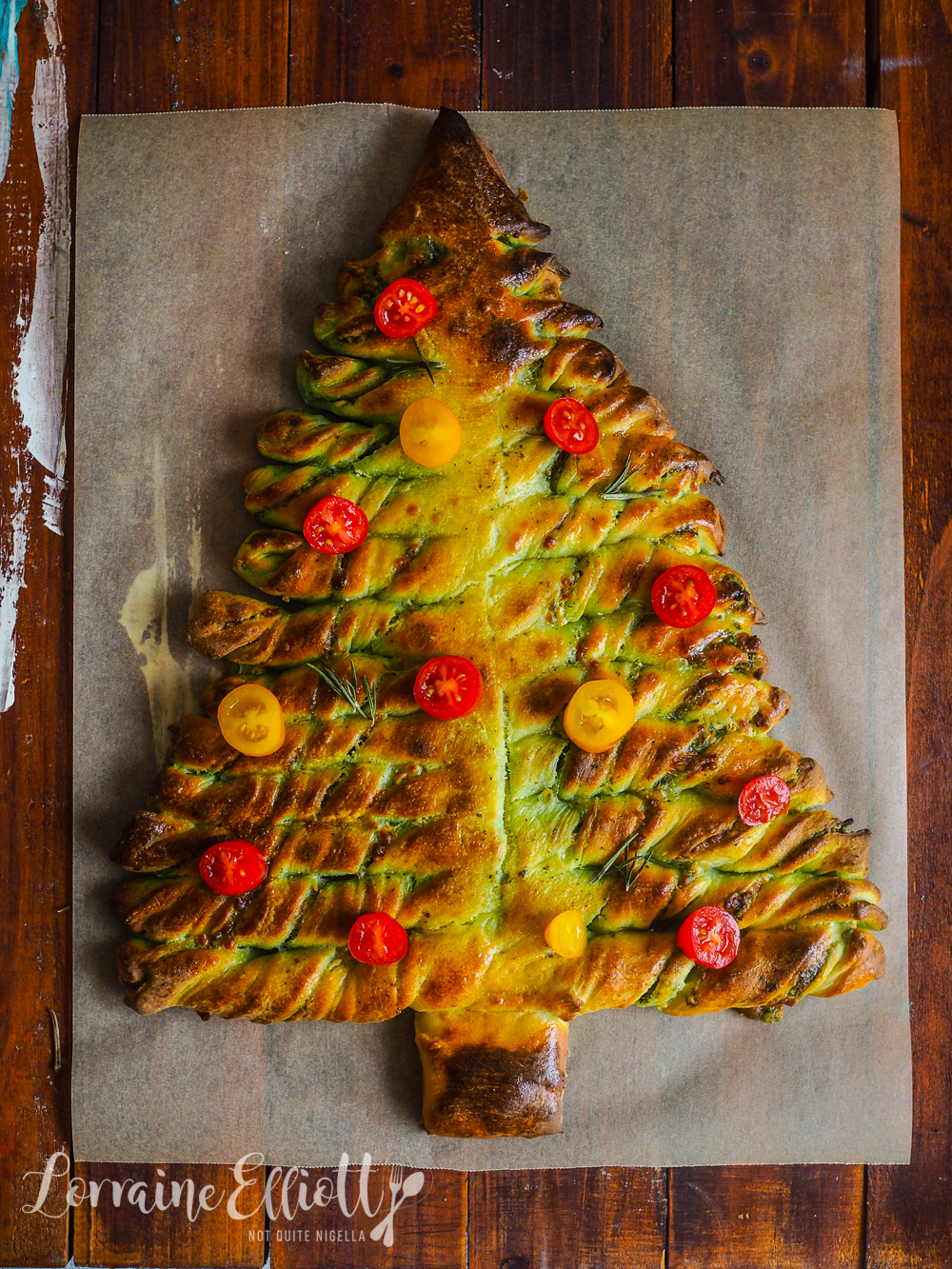 He made a huge leap of progress on the third day and had his feeding tube removed and he able to speak (although before the stroke, he never really talked much). He has relearned how to count, say the alphabet and is currently trying to learn the names of animals using our old childhood books. We still haven't seen a doctor for almost a week - they're proving as elusive as a rare bird. He also has to do 15 minutes of drawing every day. 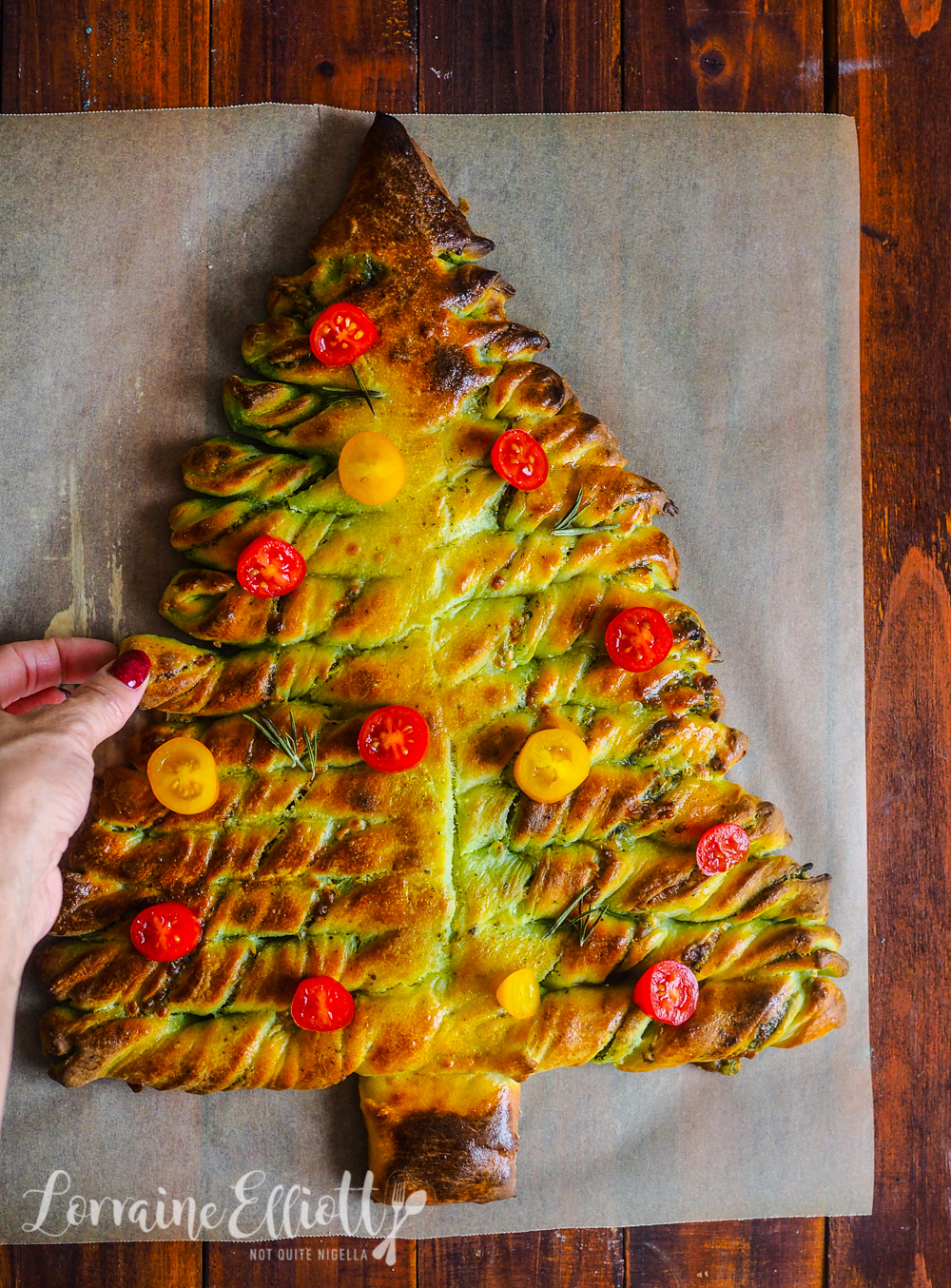 The funny thing is that he is drawing the same man over and over again. It's a man wearing a hat wearing a shirt and long pants. And nobody has any idea who it is.

And every day he either shakes his head or whispers, "Secret!". Because sometimes he's almost like a kid again.

So tell me Dear Reader, have you got your Christmas menu already planned? Are you cooking and is it at your place? What is on your menu this year? 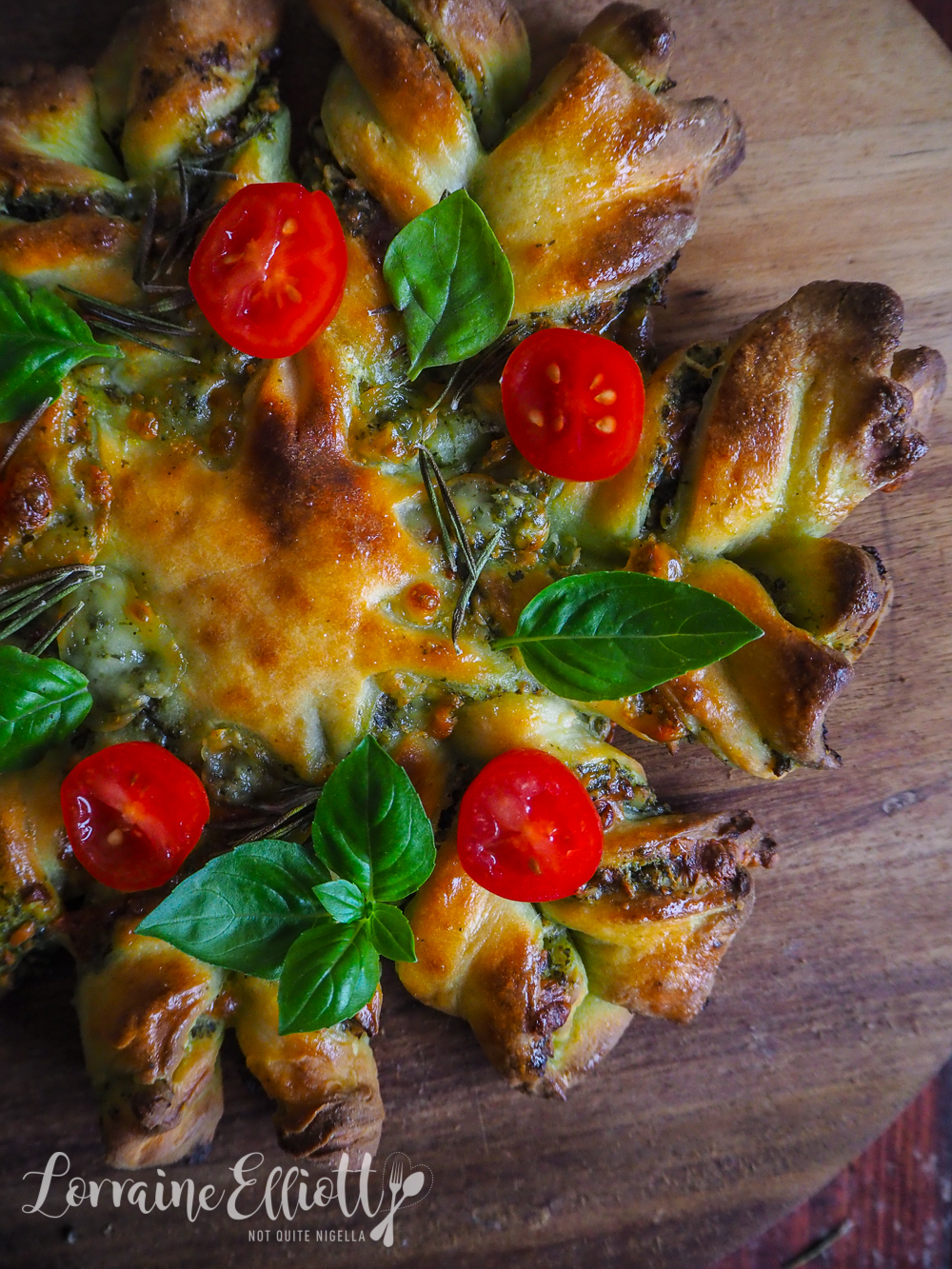 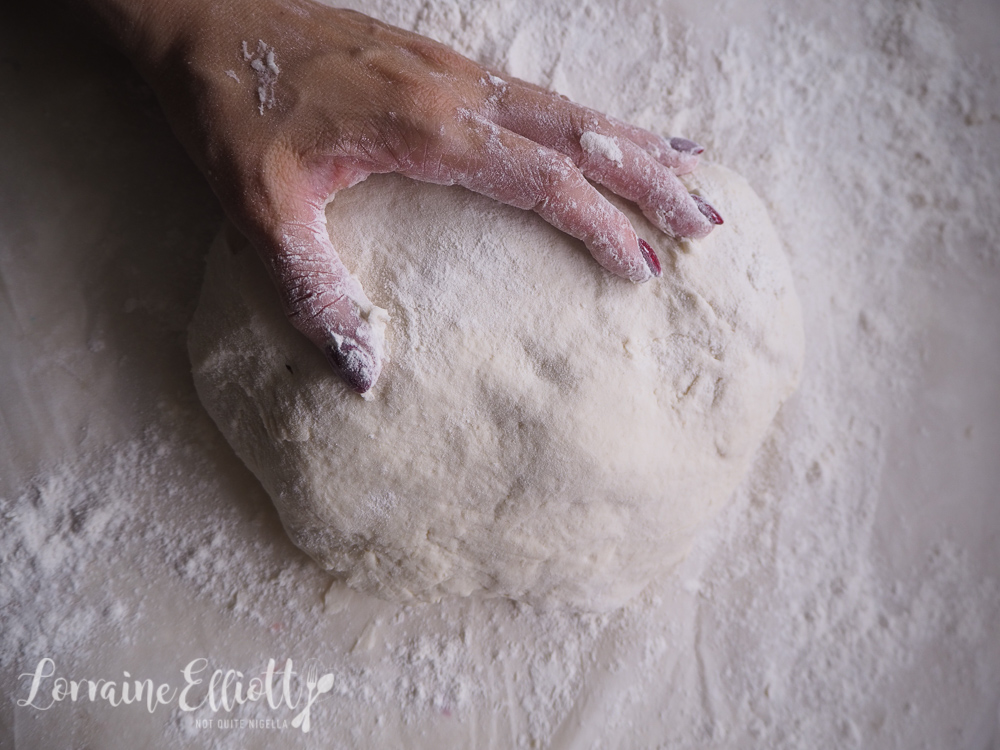 Step 1 - Mix the flour, Greek yogurt and salt until it comes together as a shaggy mix. Then knead with a dough hook for 6-8 minutes or until elastic in texture. Roll out on a floured surface into a large rectangle. Cut out a tree shape including the trunk and a triangle shaped tree but reserve the two triangles to make another triangle (which you'll put on top later). 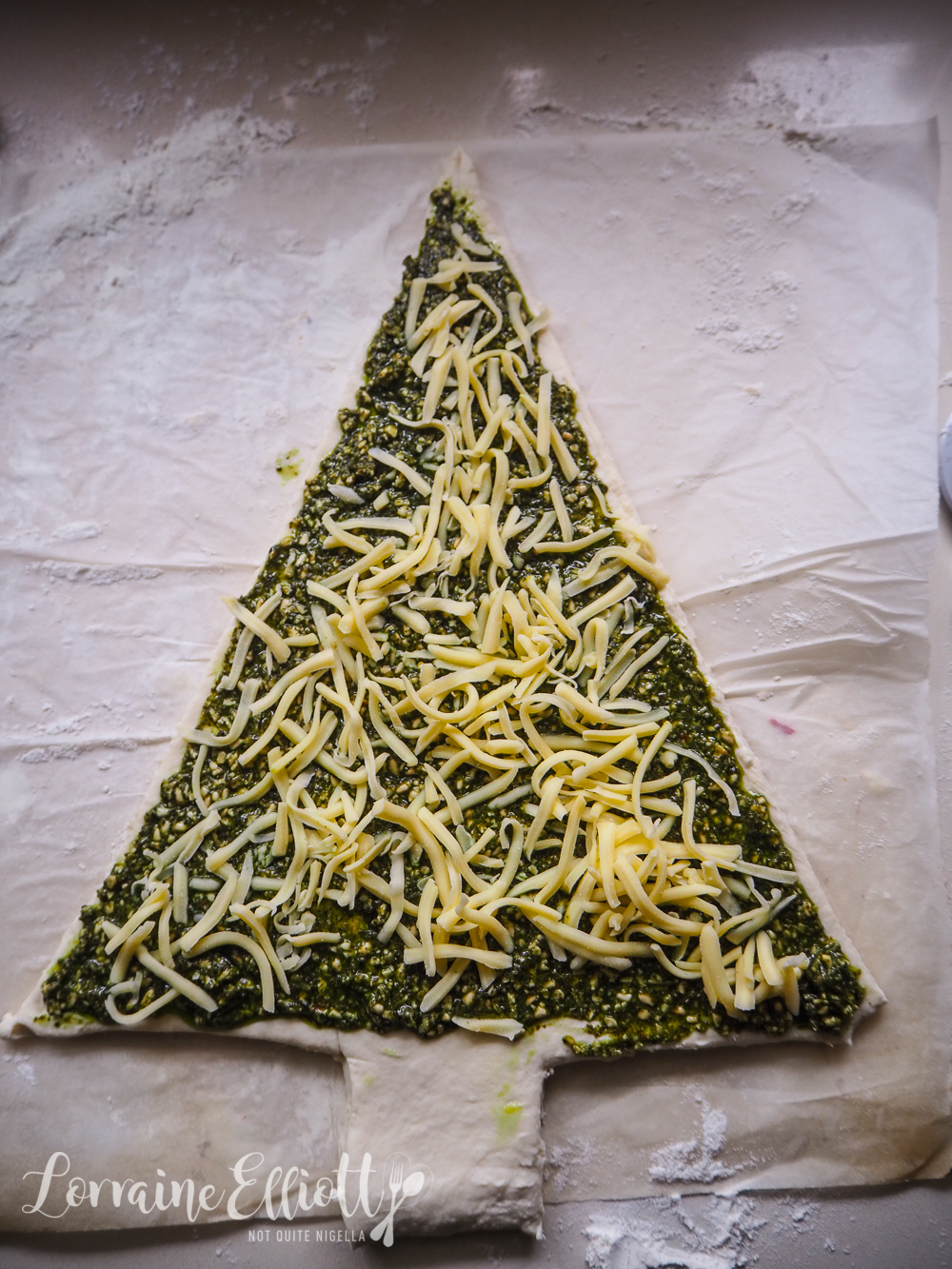 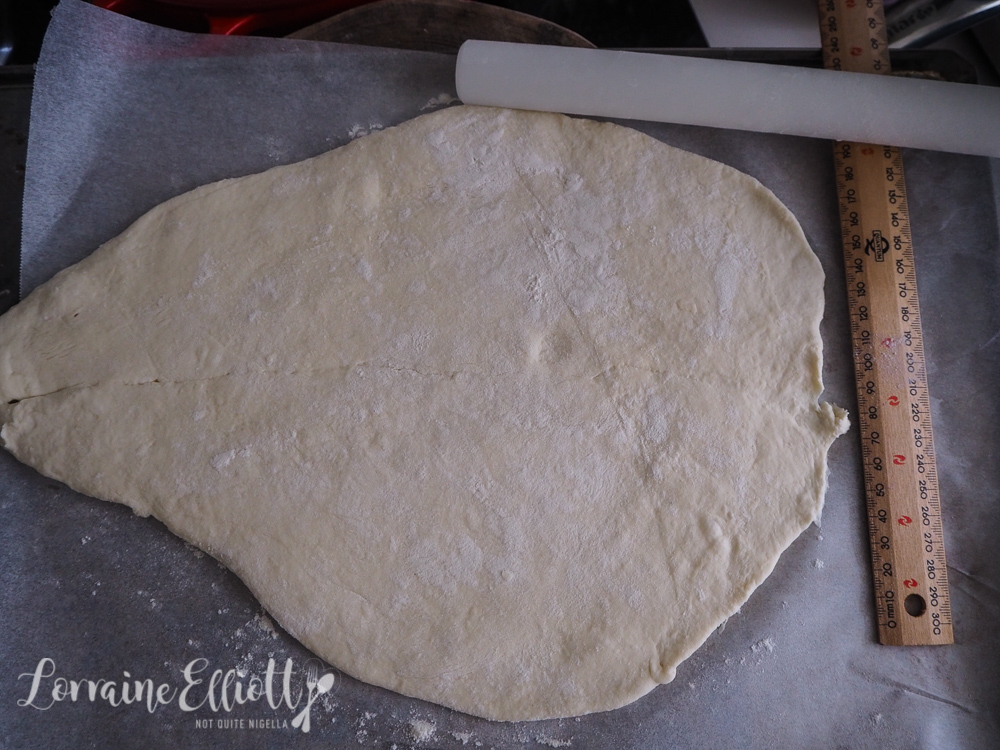 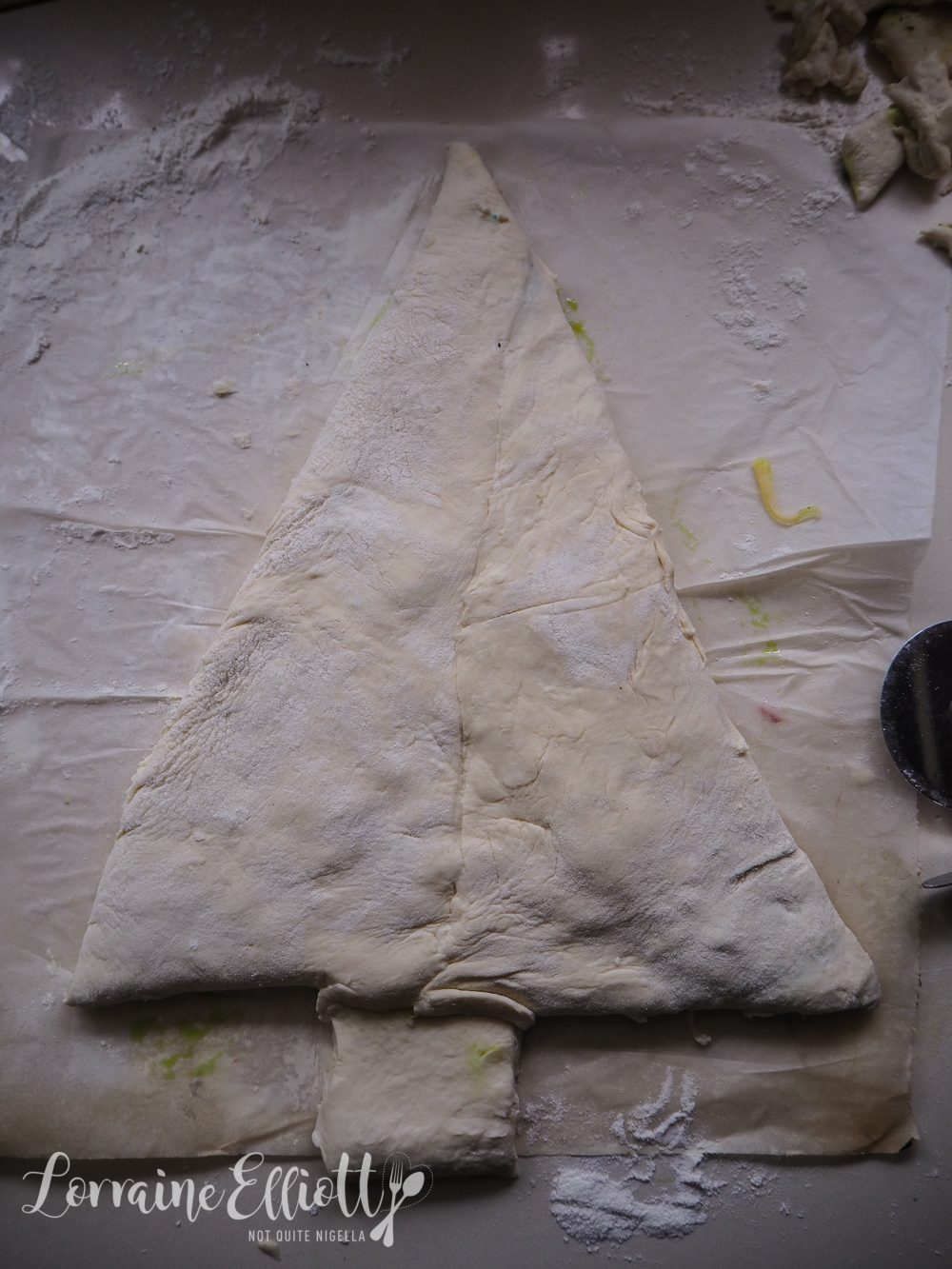 The second dough layer on top

Step 2 - Spread with 2/3 of the pesto or dip to the edges and then sprinkle with 2/3 cup of cheddar cheese. Then roll out the remaining triangle of pastry on a floured surface and then cut out a triangle around the same size. 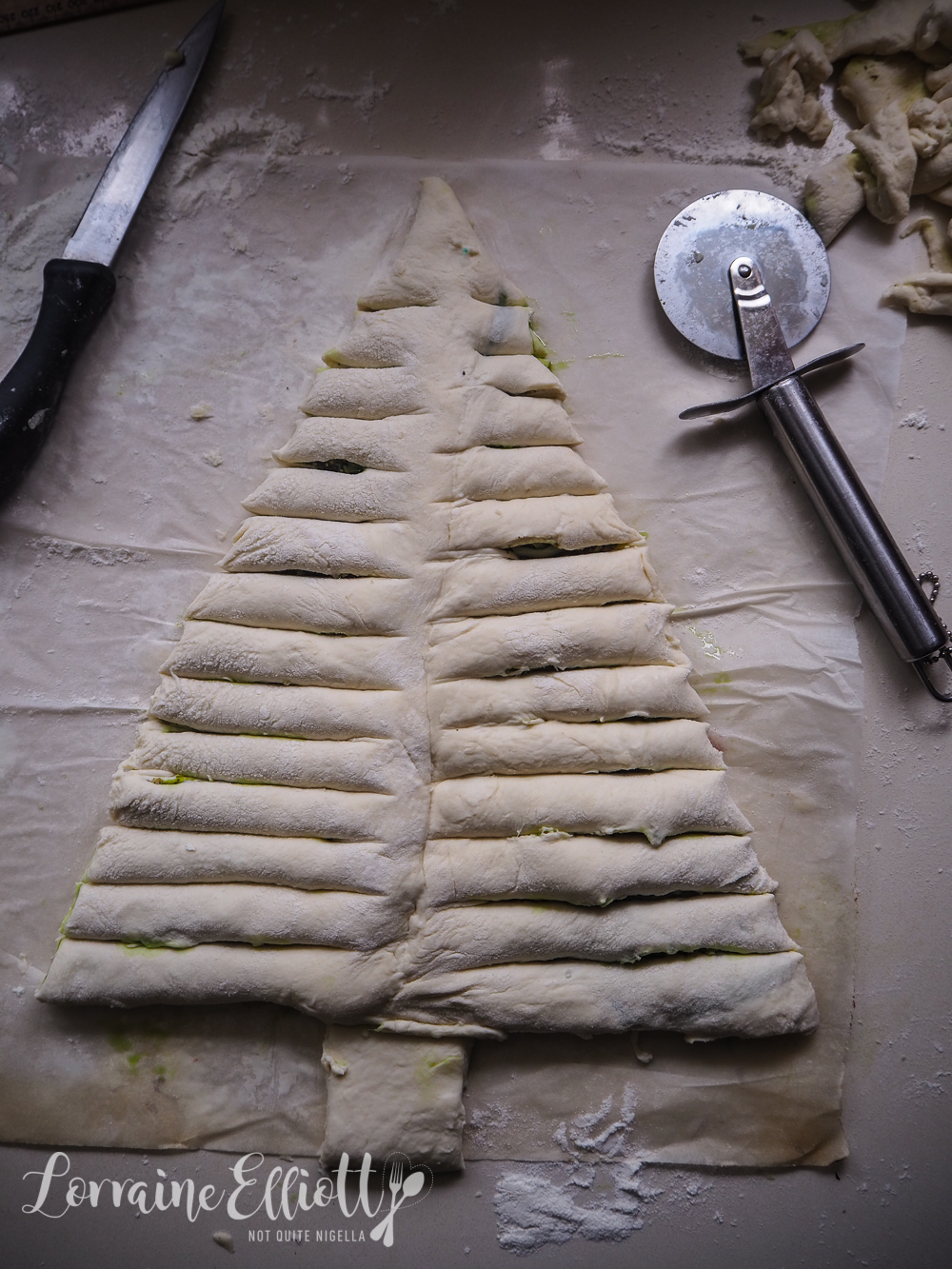 Slicing into the tree avoiding the centre 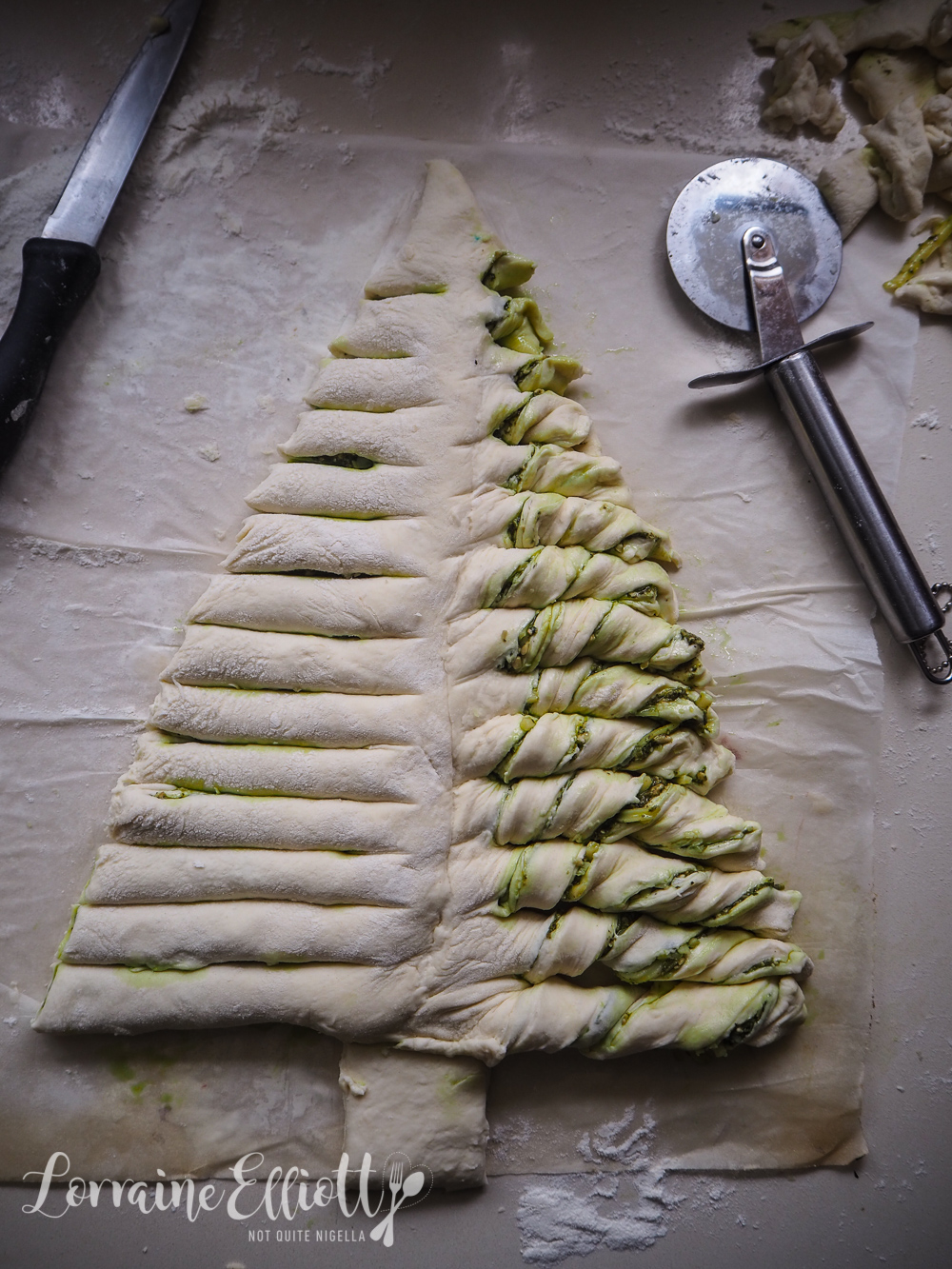 Using a ruler and pizza cutter or sharp paring knife trim to fit the bottom tree shape. Reserve the rest of the dough to make the wreath and just let it rest for the time being. 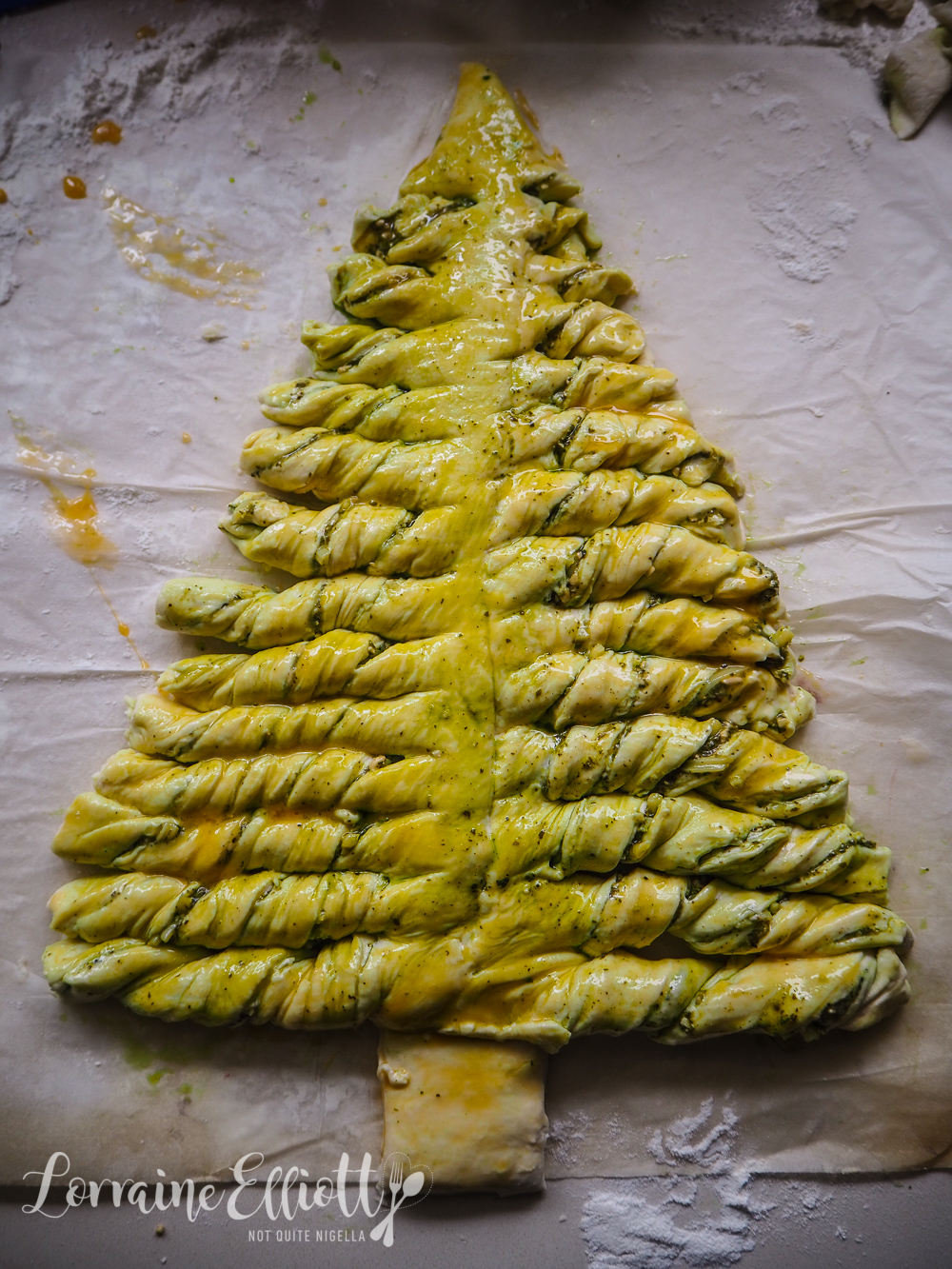 Brushed with basil oil from the dip

Step 3 - Preheat oven to 235C/455F. Take the pizza cutter or knife and cut horizontal cuts on the same level on the left and right side of the tree avoiding the centre. Twist each strip on each side to create a pattern. Then brush a bit of the green oil from the pesto dip on top to colour the bread green. Brush with the egg and rest for 30 minutes. Then bake for 10 minutes or until golden brown. 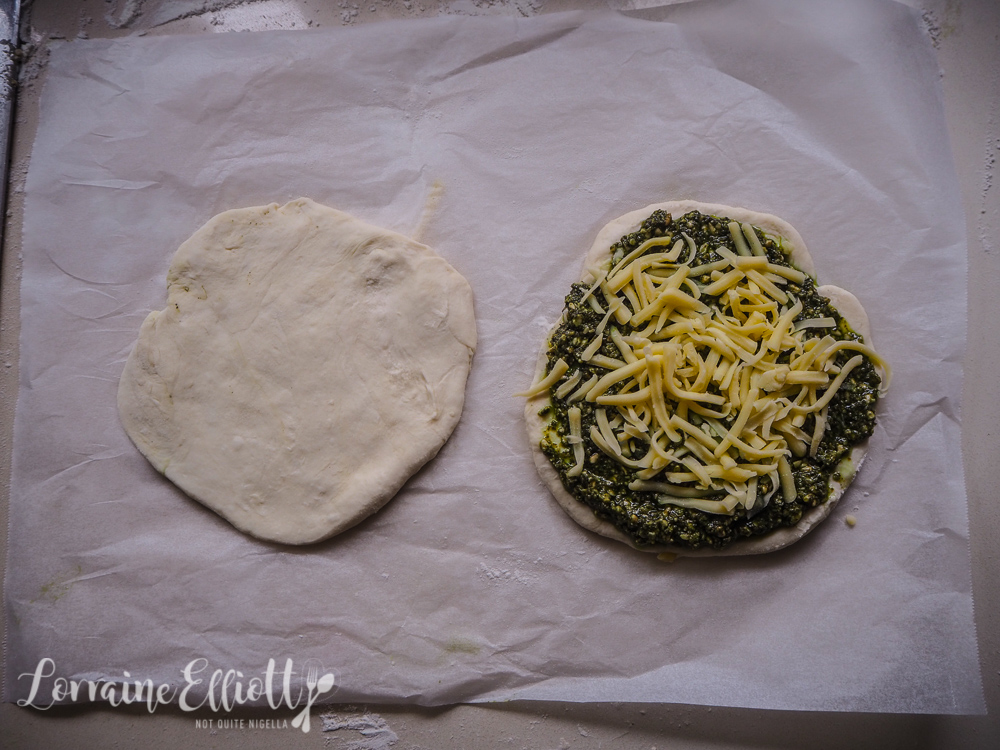 Two dough rounds, one with dip and cheese

Step 4 - Making a Christmas bread wreath: Divide the remaining dough into two even sized balls. Roll out into even sized circles and brush one disc with pesto and sprinkle with cheese. Place the other disc on top. 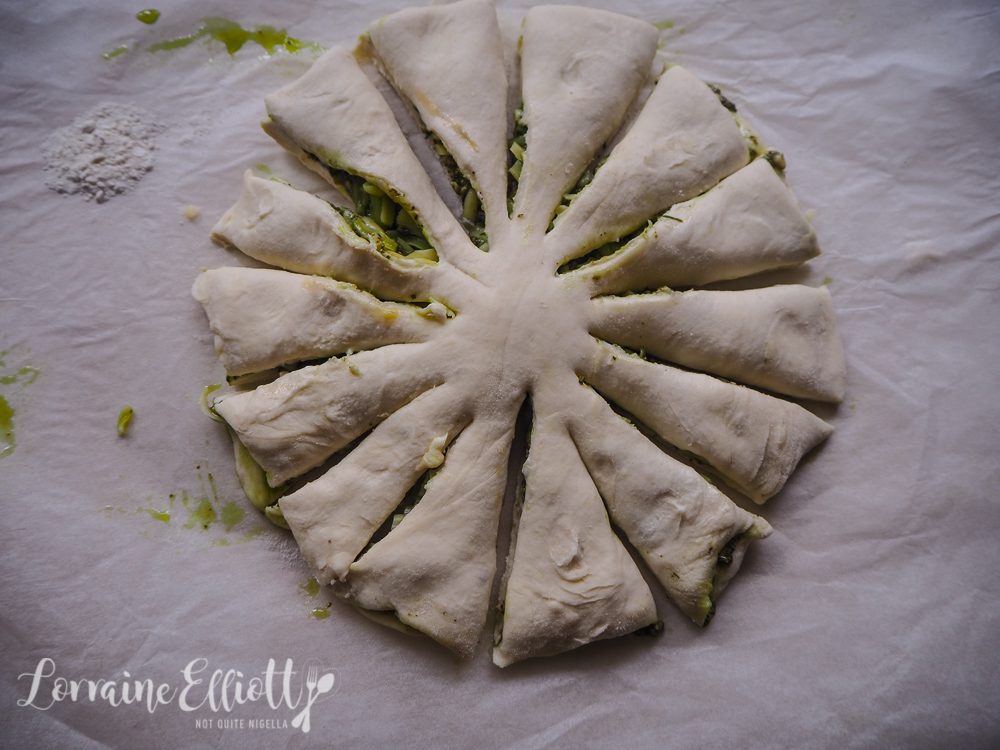 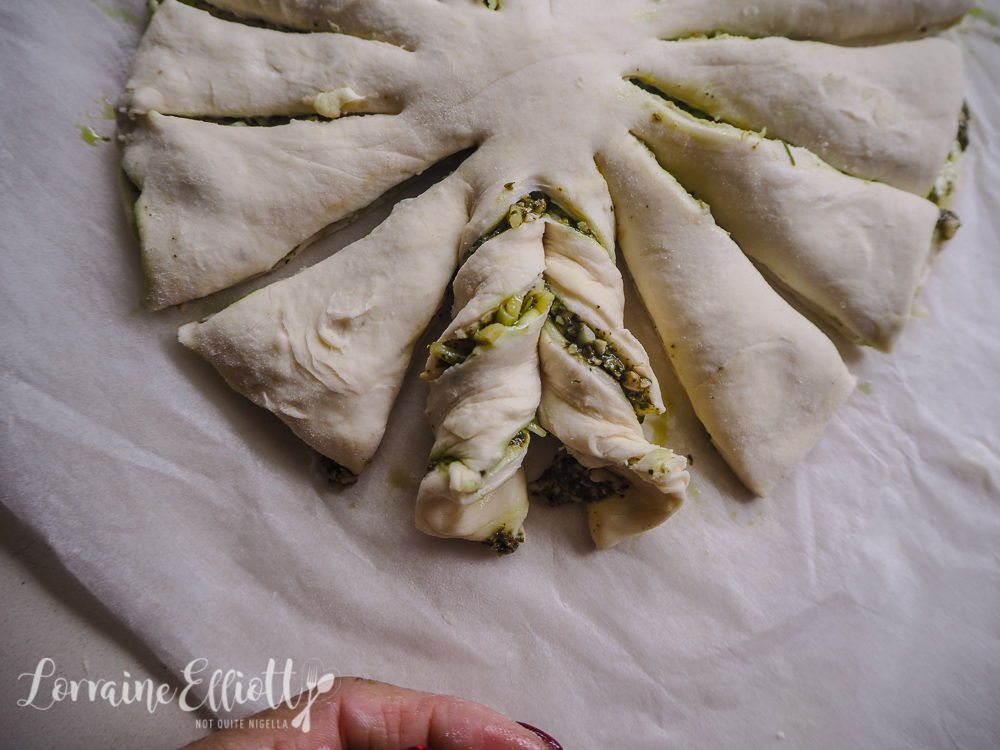 Then using a pizza cutter or knife cut 14-16 slits (even numbers) radiating around the centre leaving a circle around an inch in the centre uncut. Take two adjoining strips and twist them in opposite directions. Repeat with other pairs. Brush with egg wash and rest for 30 minutes. Then bake for 8-10 minutes or until golden brown. 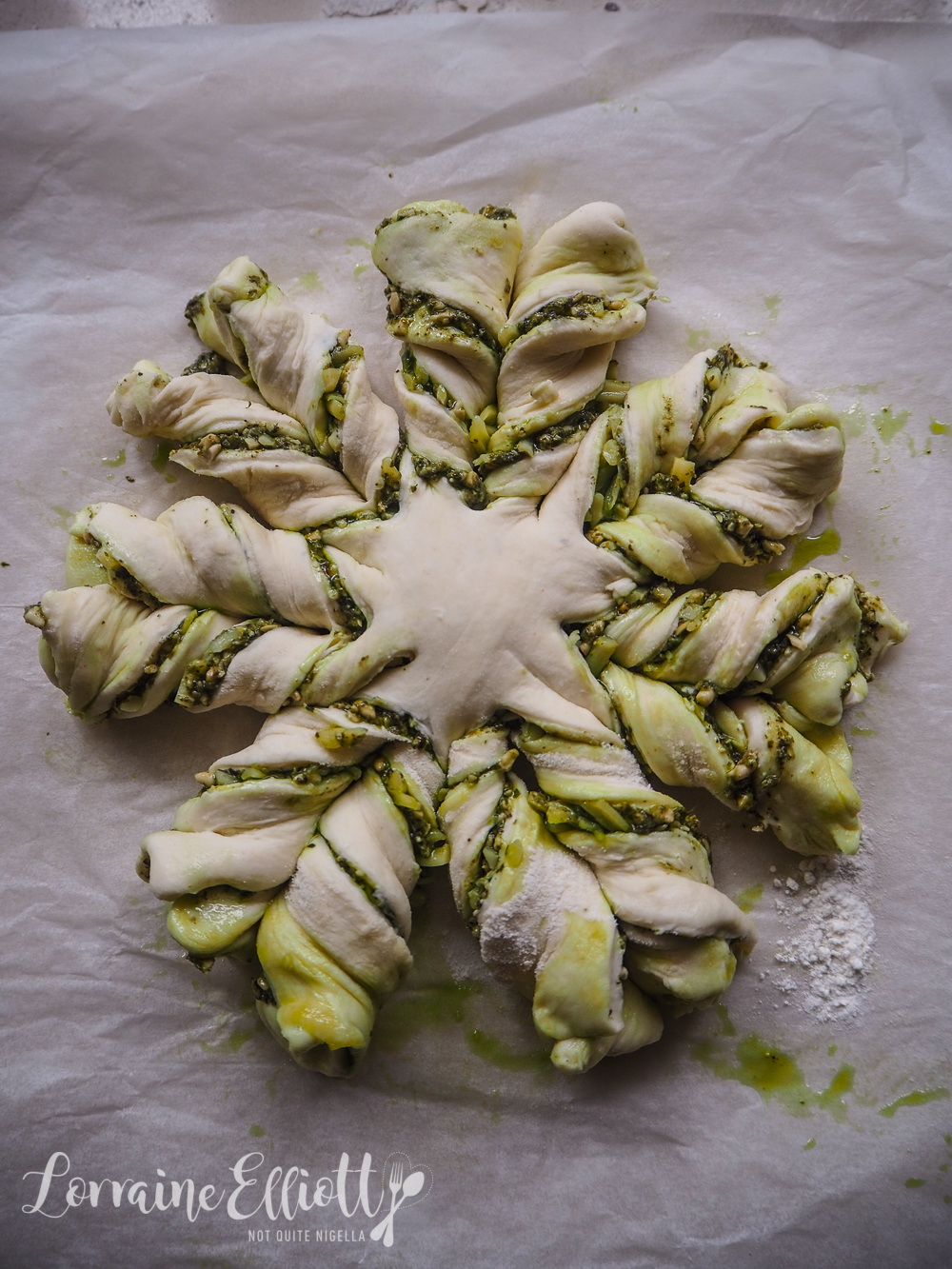