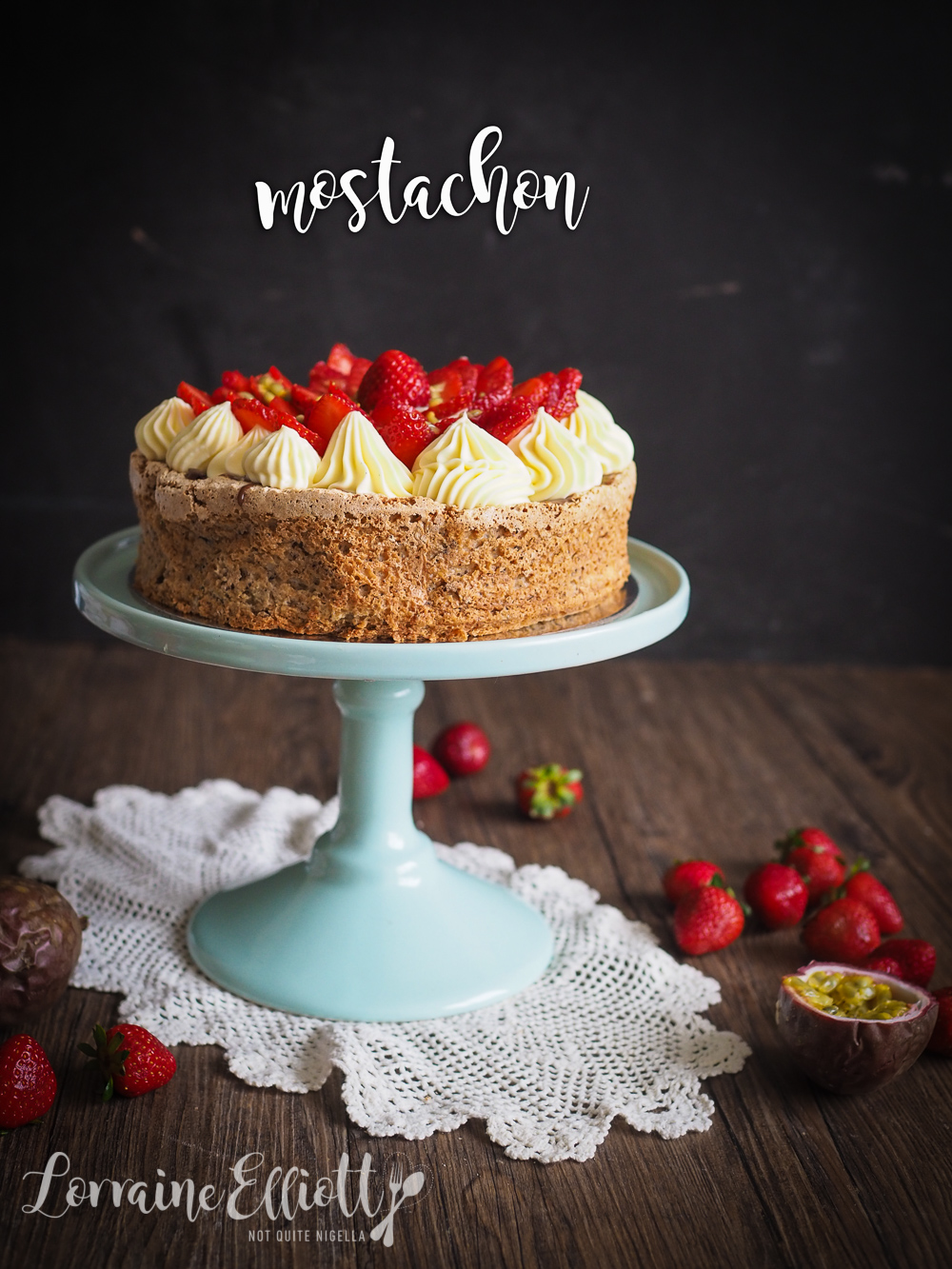 Mostachon de Fresa is a delicious Mexican fruit topped cake similar to a pavlova! Fluffy meringue is folded with nuts and cookie crumbs and then topped with a delicious cream cheese filling and fresh, sliced strawberries!

Some people call Mostachón a Mexican meringue pie or a Mexican version of pavlova although to me it's more a cousin of a dacquoise cake. Mostachón means "big moustache" and it is popular cake in Monterey, the capital of Nuevo León in the North East of Mexico. 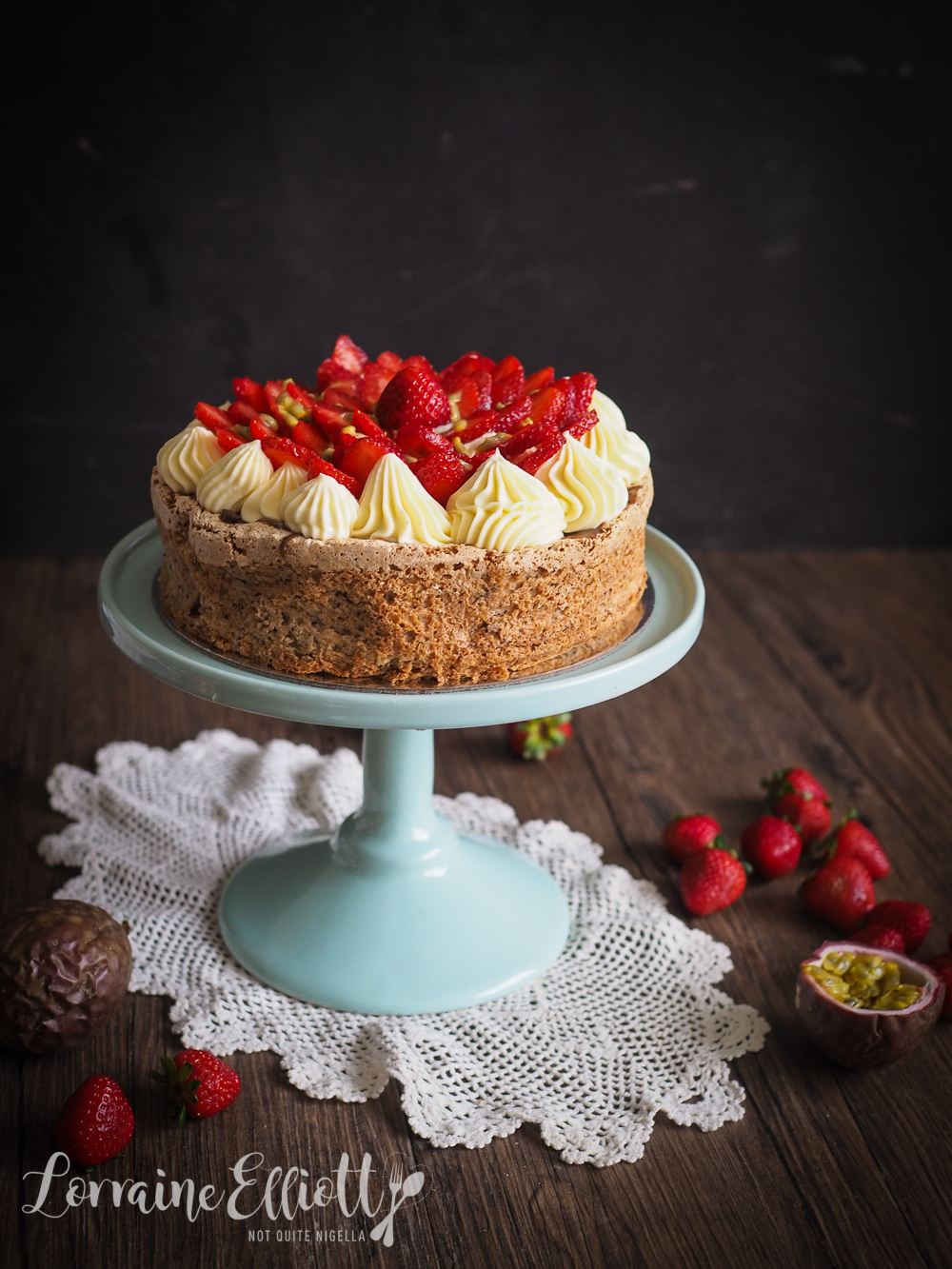 Traditionally Mostachon can tend to be on the dry side with all of the nuts and cookies mixed in and the cake layer. People love the chewy, slightly dry texture of mostachon. I adjusted the base ingredients to be less dry and more pavlova-like just to suit our tastes. I also didn't have walnuts that are traditionally used so I used hazelnuts. 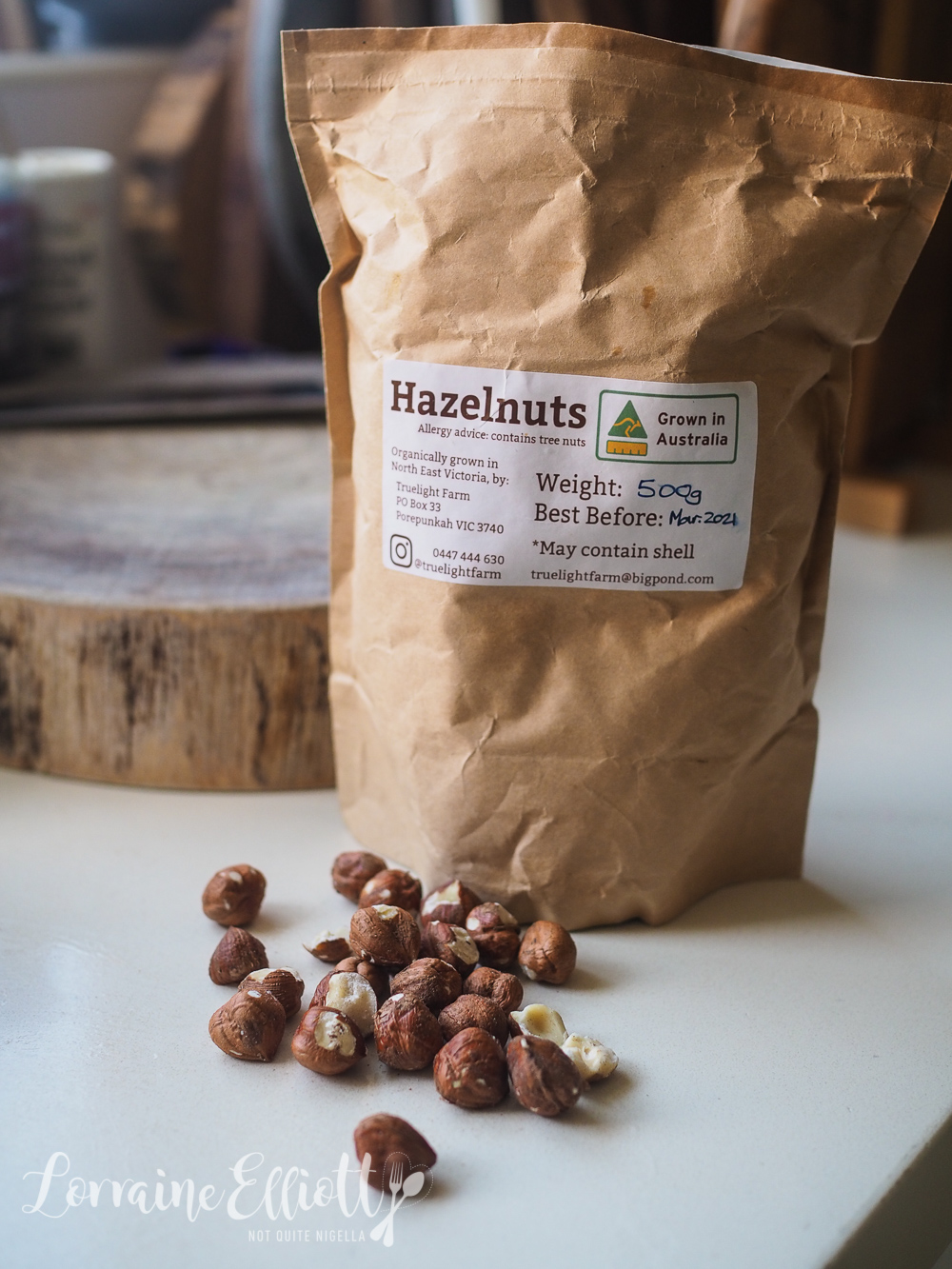 I used some hazelnuts I was sent from Truelight Farm in Porepunkah, Victoria

Normally a mostachon cake is thinner and the quantities would be 4 egg whites (instead of 8) and 1 cup of caster sugar (instead of 1 3/4 cups). If you want to have the more traditional version of Mostachon, please replace the egg white and sugar quantity with this one but keep the other ingredients the same. 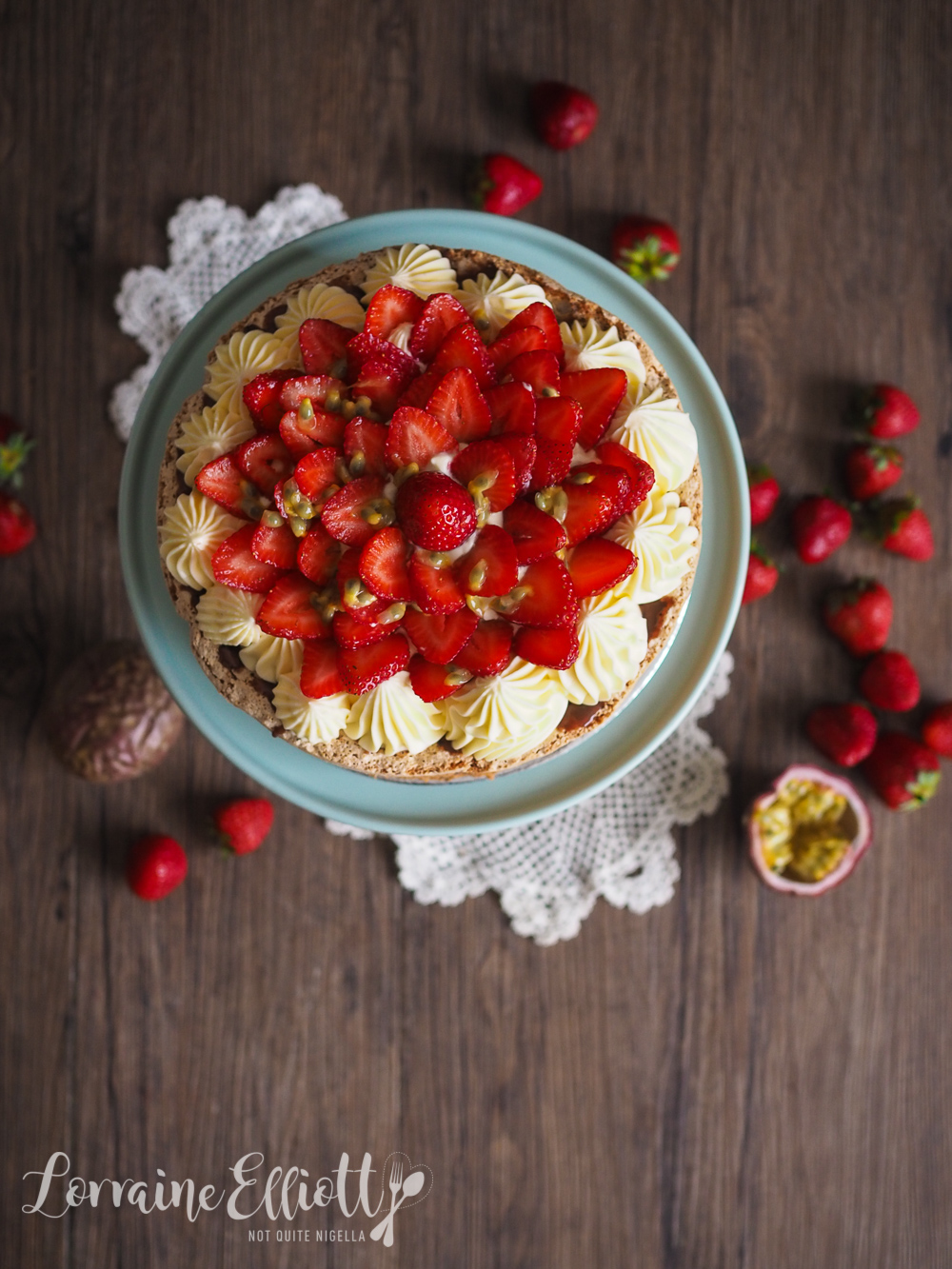 You can also use mangoes on top of mostachon. I added passionfruit because I was given some beautiful home grown ones by Valentina. Really any seasonal fruit will work well.

I actually made two of these Mostachons as I had lots of egg whites left over from the fruit tarts and custard tarts and the first one was a bit dry for my taste and I knew that if I just changed the quantities and experimented a little, I would end up with a mostachon that we would enjoy more. 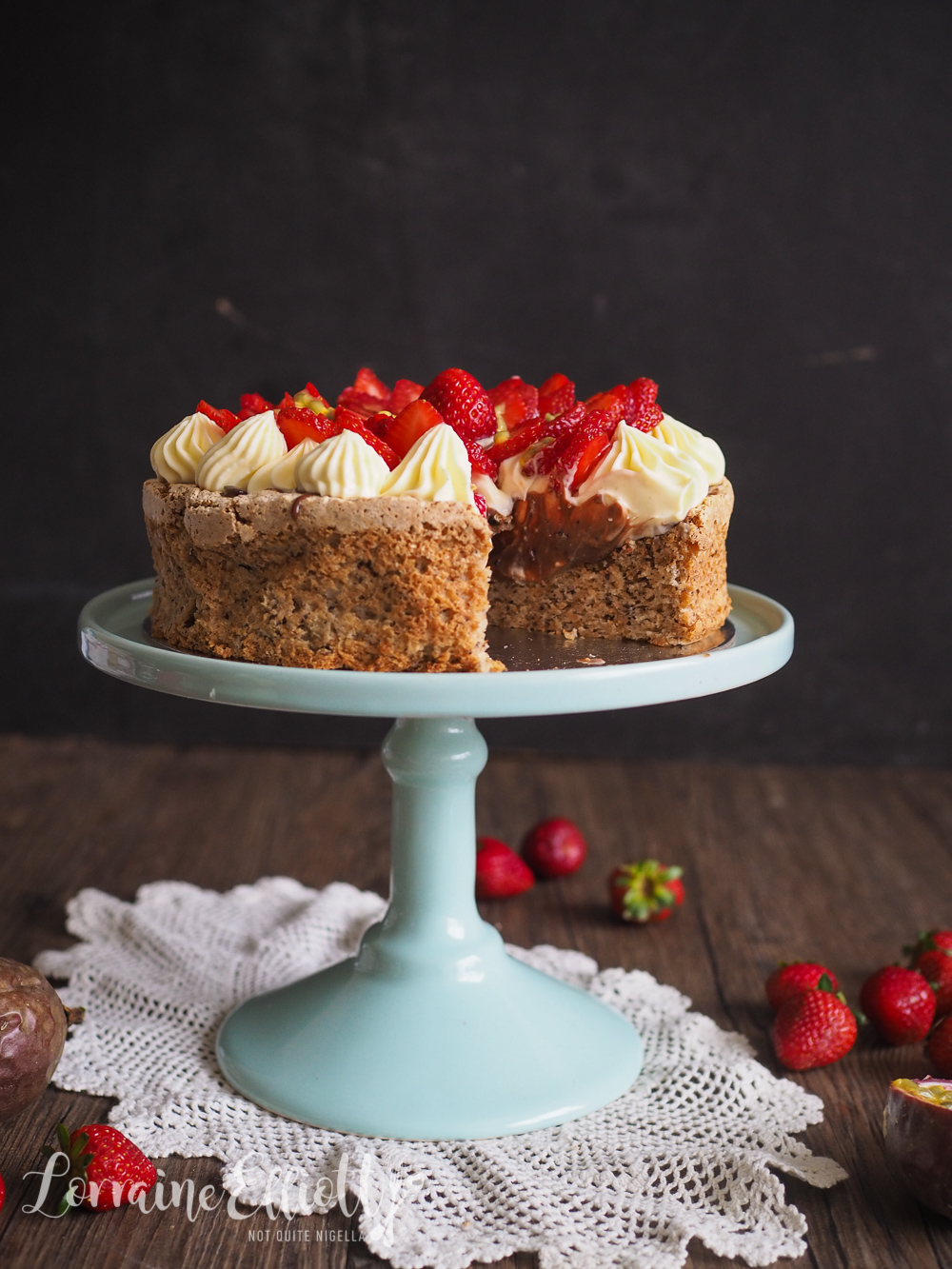 With the first one, I felt like it was more a test one and sometimes you adjust the recipe the second time to suit your tastes. I even added a layer of chocolate ganache because chocolate goes so well with strawberries. 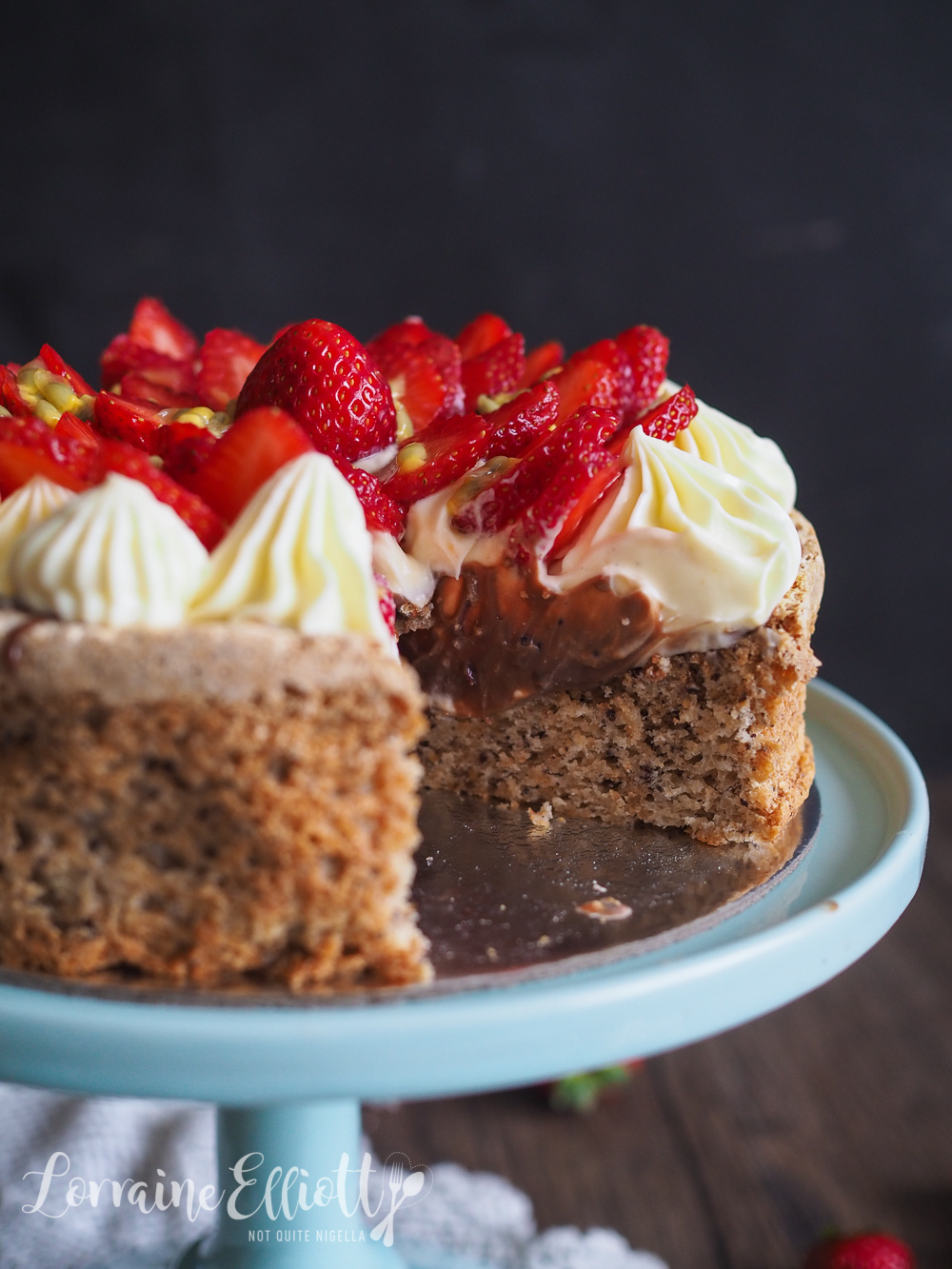 Another example of getting better on the second attempt was with our dogs. Mochi was our first dog and I felt like she was our first child. If you're a first child you know that you get the unenviable task of breaking your parents in while the youngest gets it much easier. Mr NQN and I are both the eldest and we both definitely clashed with our parents more than our siblings.

We tried our best with Mochi and she wanted for nothing but I feel like we are better parents with Teddy. Teddy has his own "apartment" ie a safe space where he can just chill and Mochi didn't as we just didn't know that she needed it (although Mr NQN pointed out that she just wanted to stick by me 100% of the time anyway). 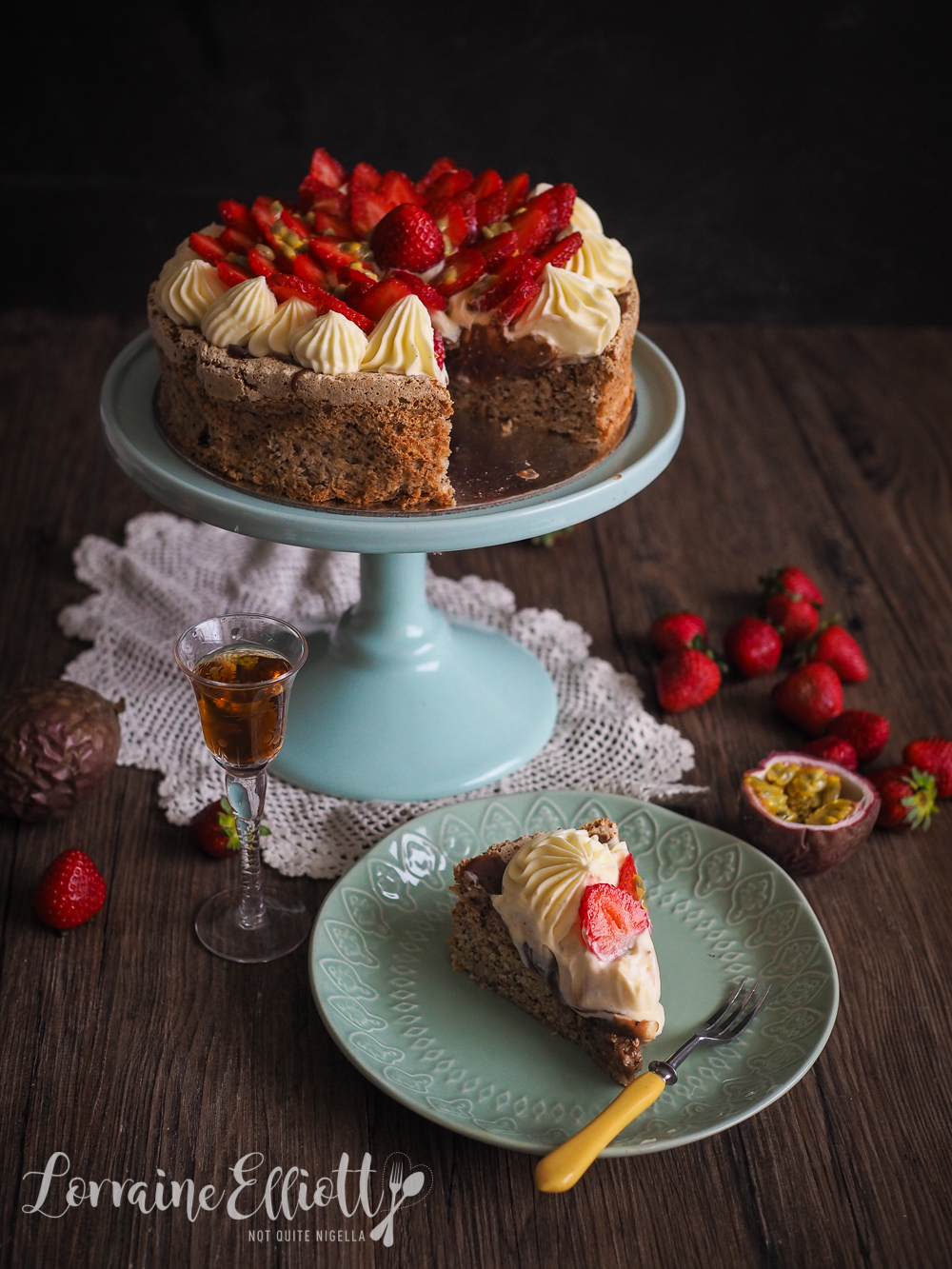 One thing that Teddy isn't fond of is the car. Mochi was fine in it and had no issues at all but Teddy gets very anxious. He starts licking his lips, then drools and then froths and throws up. 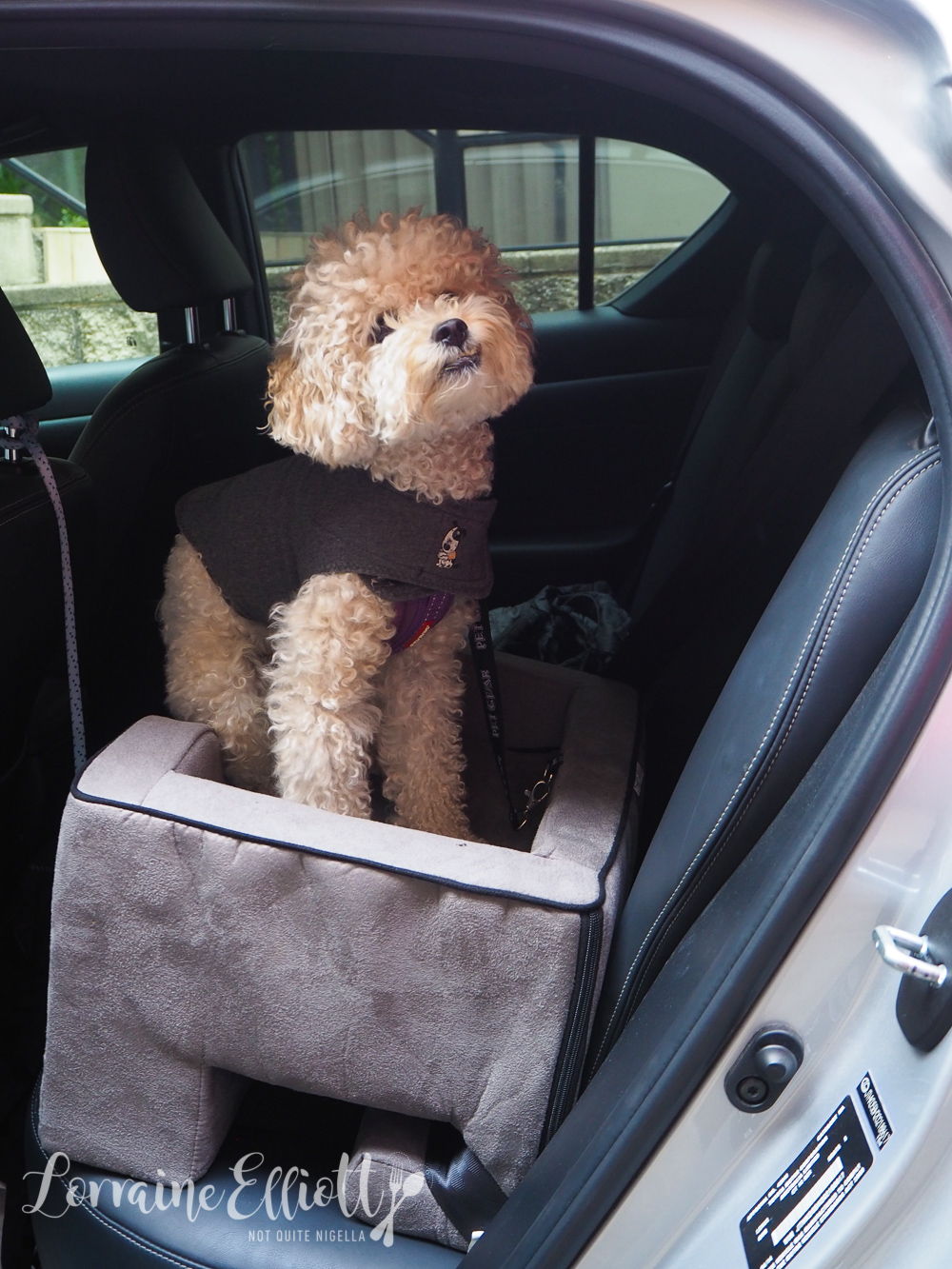 We sought advice from dog owning friends and Ivy suggested buying him a very high booster seat. The one we bought him is designed for little dogs and he is able to see out of the car which is helpful in the same way that looking at the horizon is helpful with carsickness or seasickness.

We tried it with me sitting in the back seat with him and then I gradually moved back to the front seat. He is coming ahead in leaps and bounds. He now sits up and sniffs the air and no longer licks his lips and drools which means that Teddy can now come on road trips!

So tell me Dear Reader, have you ever tried a mostachon? Do you make the recipe as directed the first time and then change it on subsequent occasions? 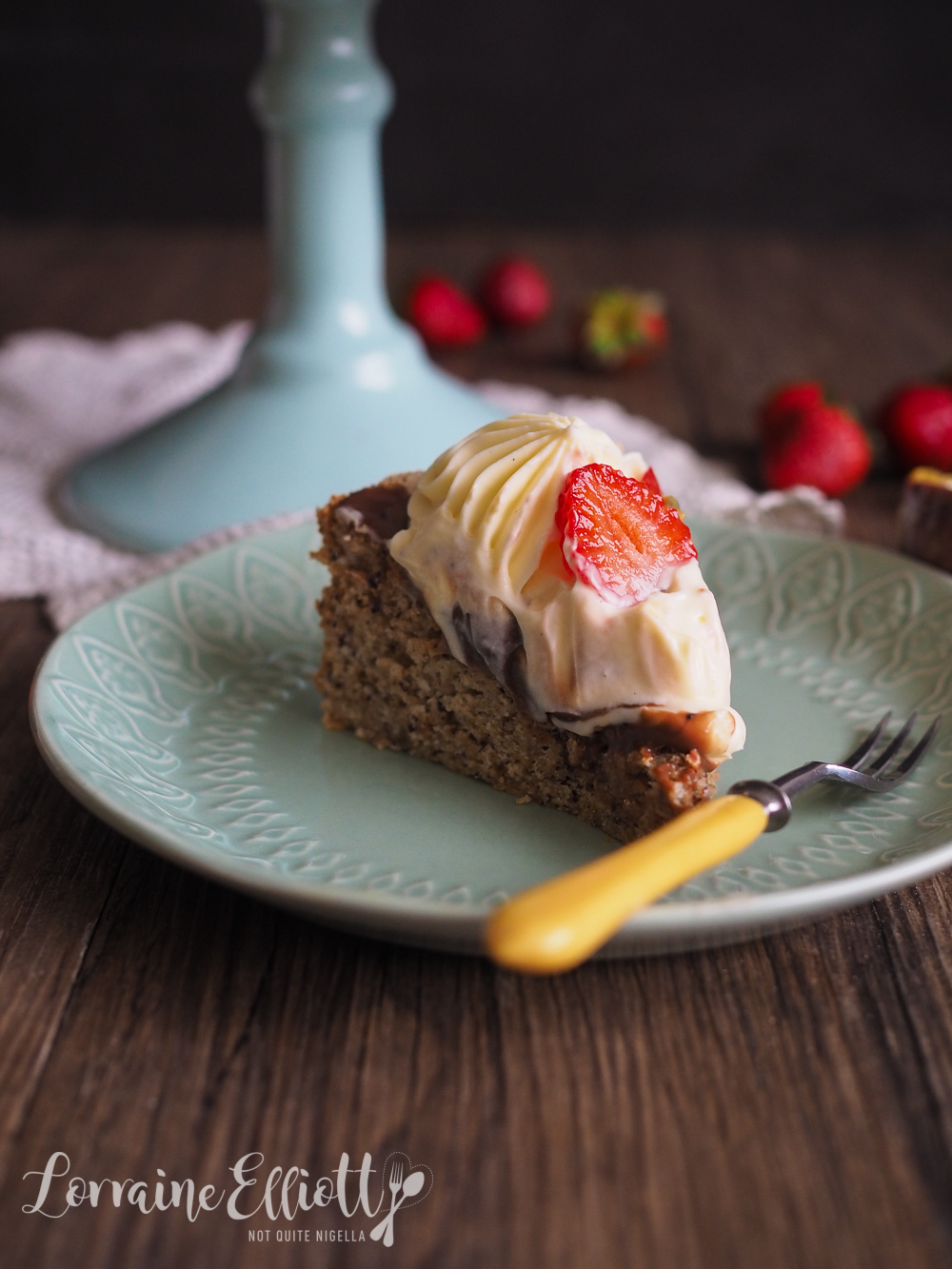 Step 2 - Using a very clean bowl whisk the egg whites and cream of tartar until soft peaks form. Then gradually add sugar and whisk until you get firm peaks and the mixing bowl can be tipped upside down and the meringue doesn't move. 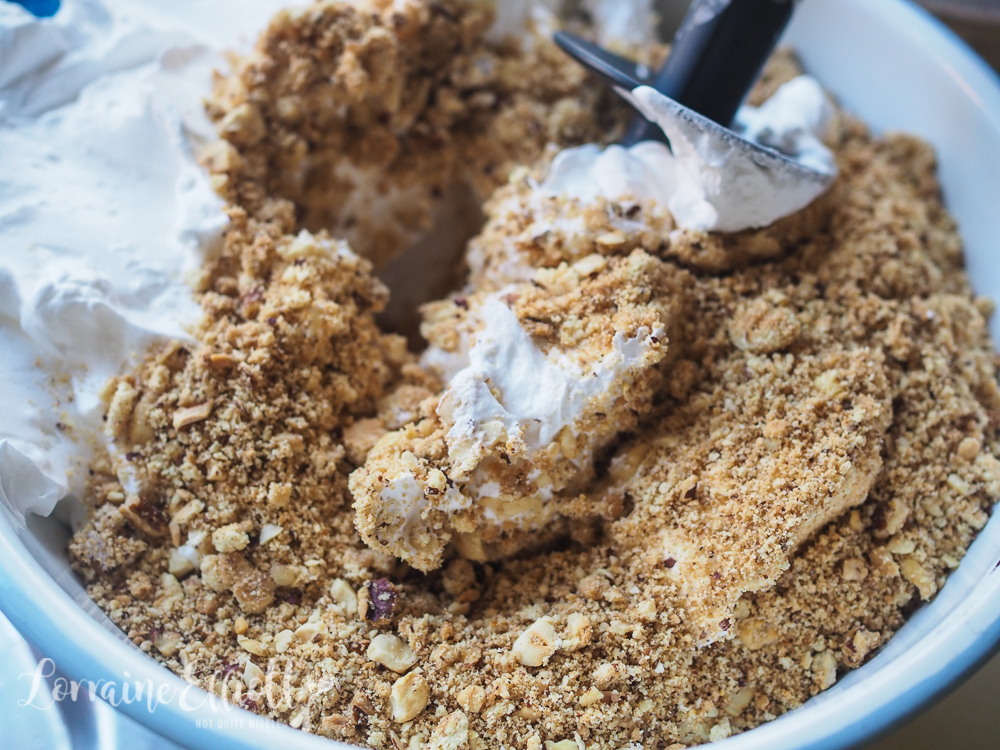 Step 3 - Fold in the ground up nuts, biscuit crumbs, vanilla and salt and scoop into the prepared tin. Smooth the top with an angled spatula and bake for 50-55 minutes. Cool in the oven and don't worry if the centre sinks, it just means that there's a cavity for that delicious fluffy cheesecake cream. This part can be made 2-3 days ahead of time. Just cover and store in the fridge. 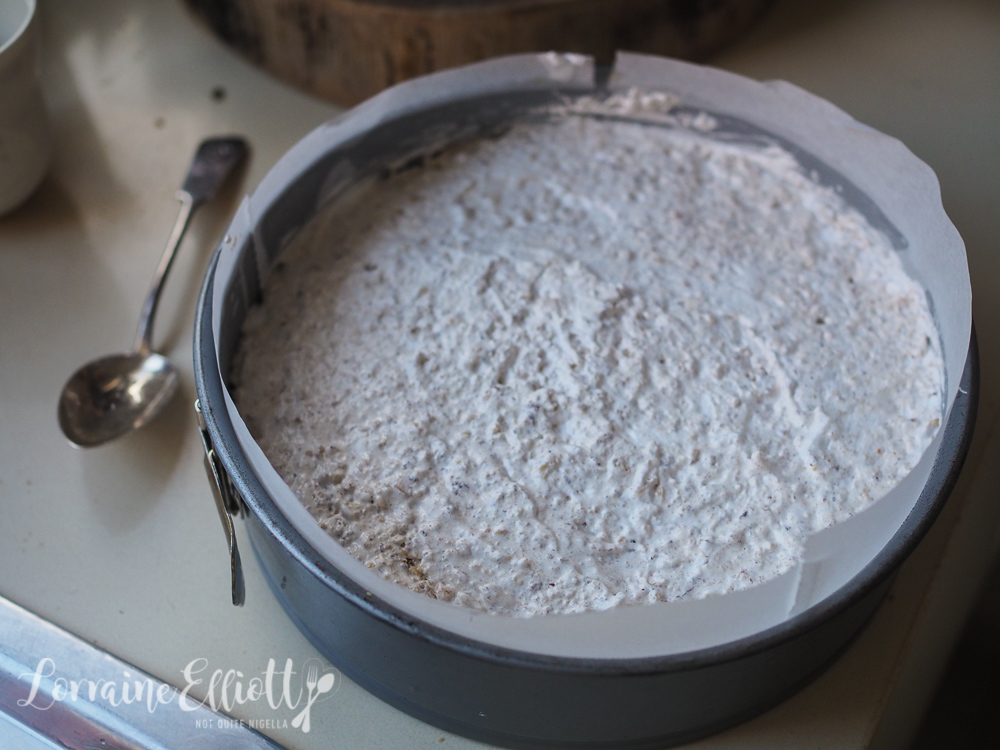 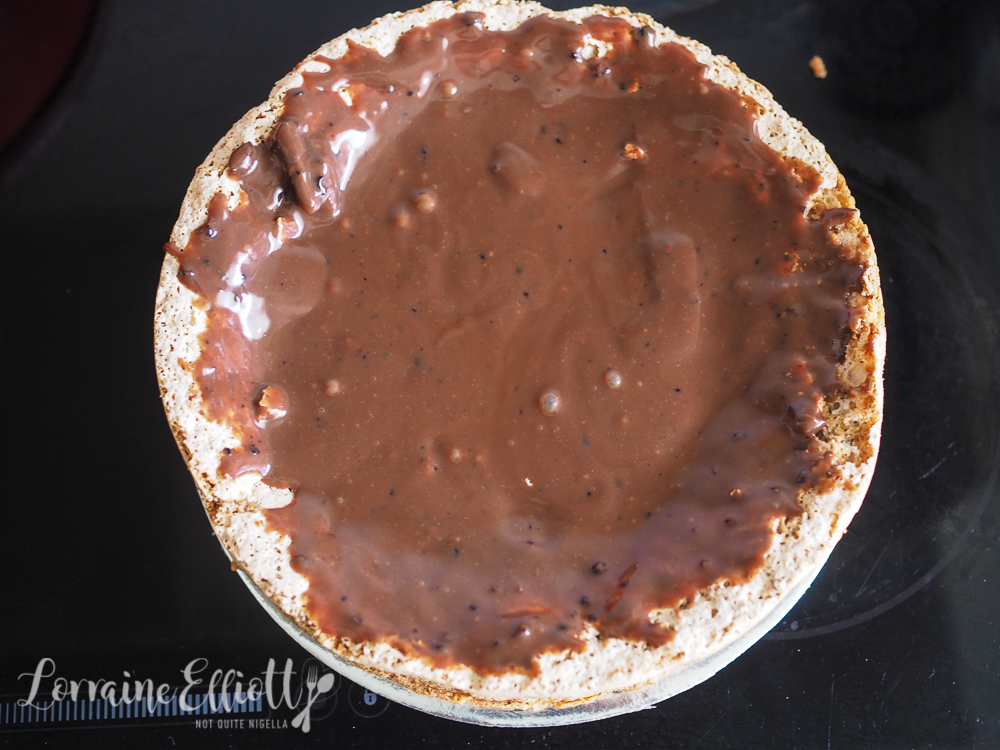 Step 5 - Whip the cream until you get soft peaks. Then add the cream cheese, sugar and vanilla bean paste. I piped this over the cake using a #867 piping tip. 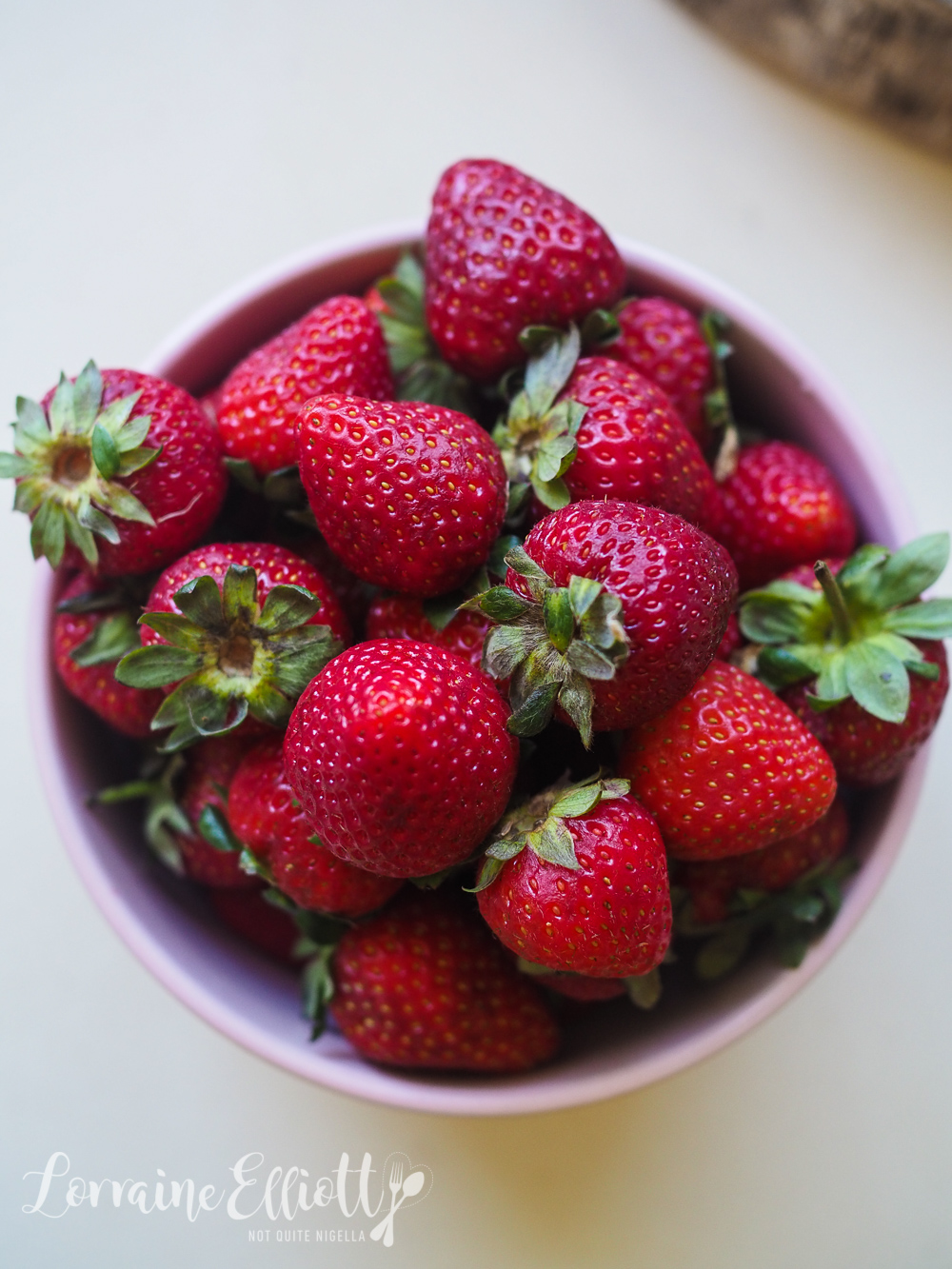 Step 6 - Wash, hull and slice strawberries and place a single whole strawberry in the centre on top of the cream and then fan out strawberry slices around it (you won't end up using the very small slices at the side). Add passionfruit. 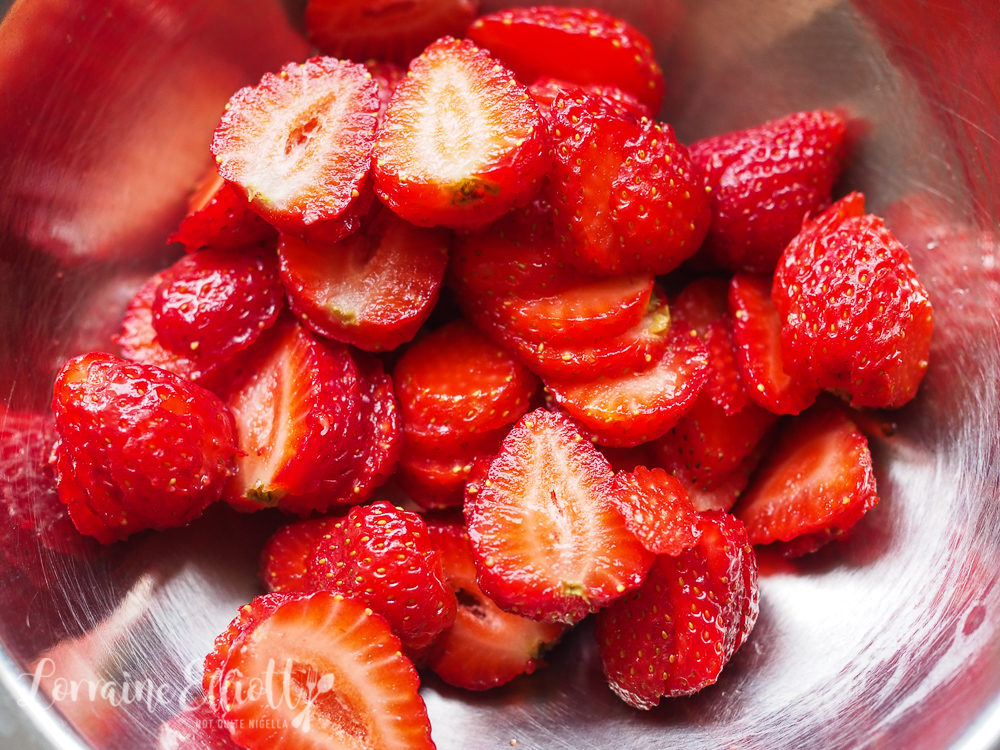 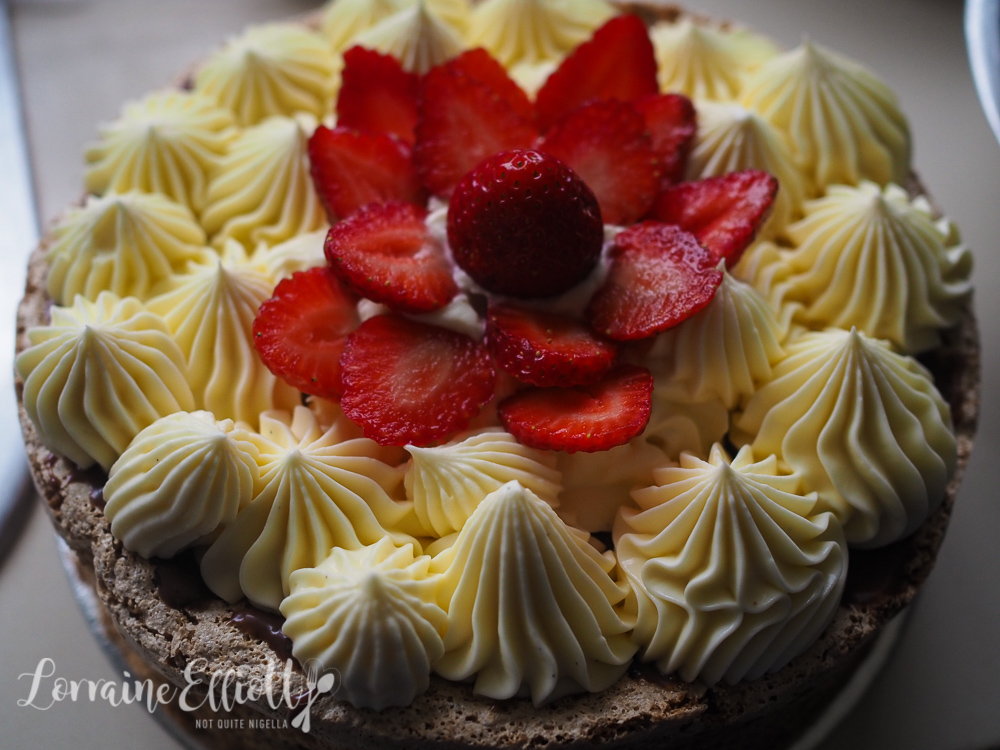