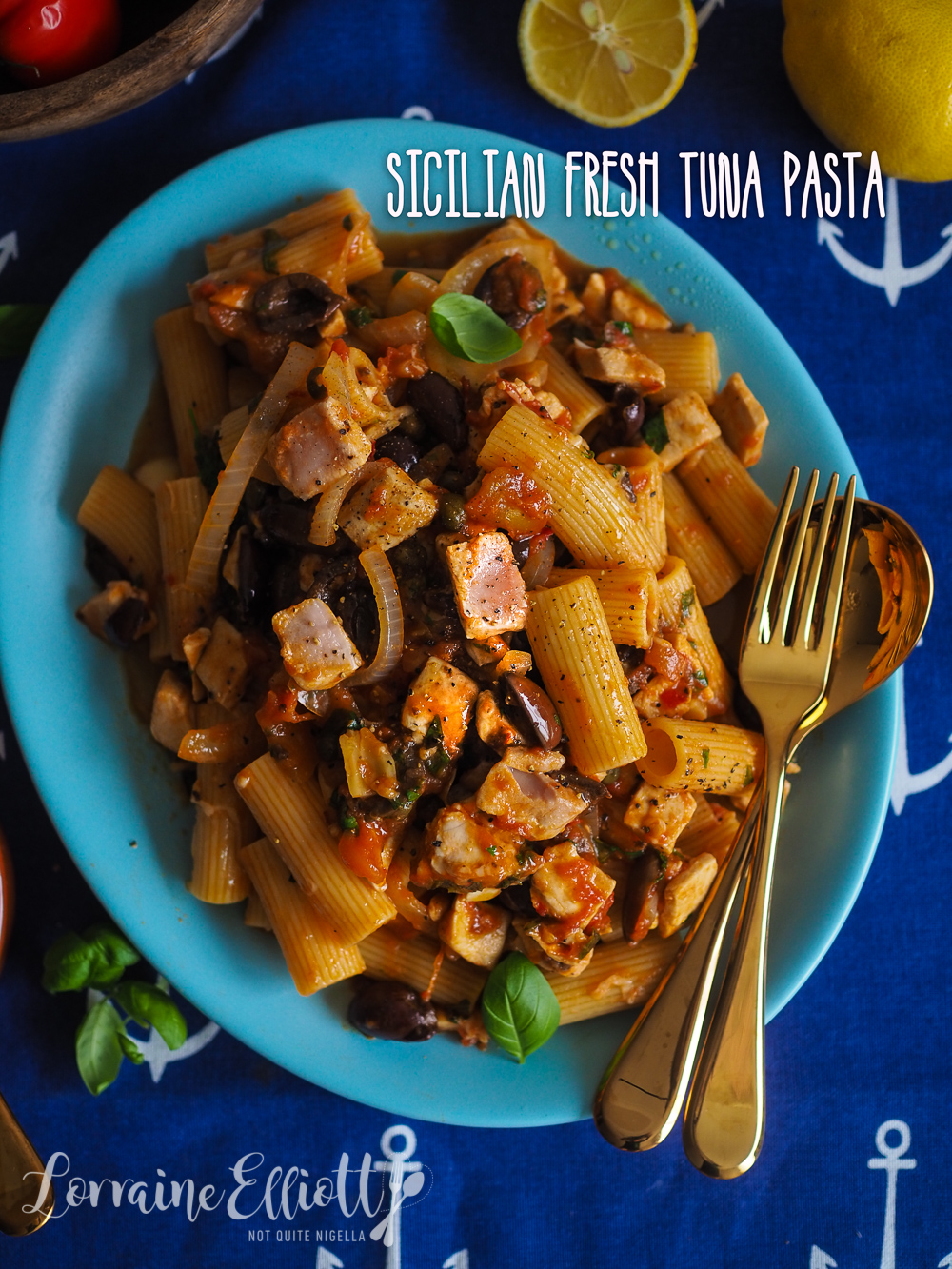 This Pasta alla Eoliana or Aeolian Islands Pasta is something special. It uses sashimi grade tuna cubes, kissed by the heat of the pan but still juicy and tender pink inside with a gutsy caper, olive and herb dressing. This Sicilian recipe is simplicity itself and if you like fresh tuna, this is a pushy recipe!

I tried this at Monica's house when she served it to us for dinner. I was so enamoured of it I had three servings and that's just not me. The whole pasta dish was so juicy and flavoursome that each bite delivered a powerhouse of flavour along with the perfectly cooked al dente pasta. This pasta may just change the way you feel about tuna pasta.

"My mom often made pasta with tinned tuna and she got that from the Marcella Hazan cookbook. Then in the summertime she'd do the fresh tuna with capers and olives," explains Monica, before adding "She was an extremely good cook but she loved following recipes, like the opposite of me."

"There's a lot of tuna fishing in the Aeolian Islands. This pasta comes from what was around. My experience of it was eating it in the summertime," says Monica. The bottarga on top is Monica's own touch. 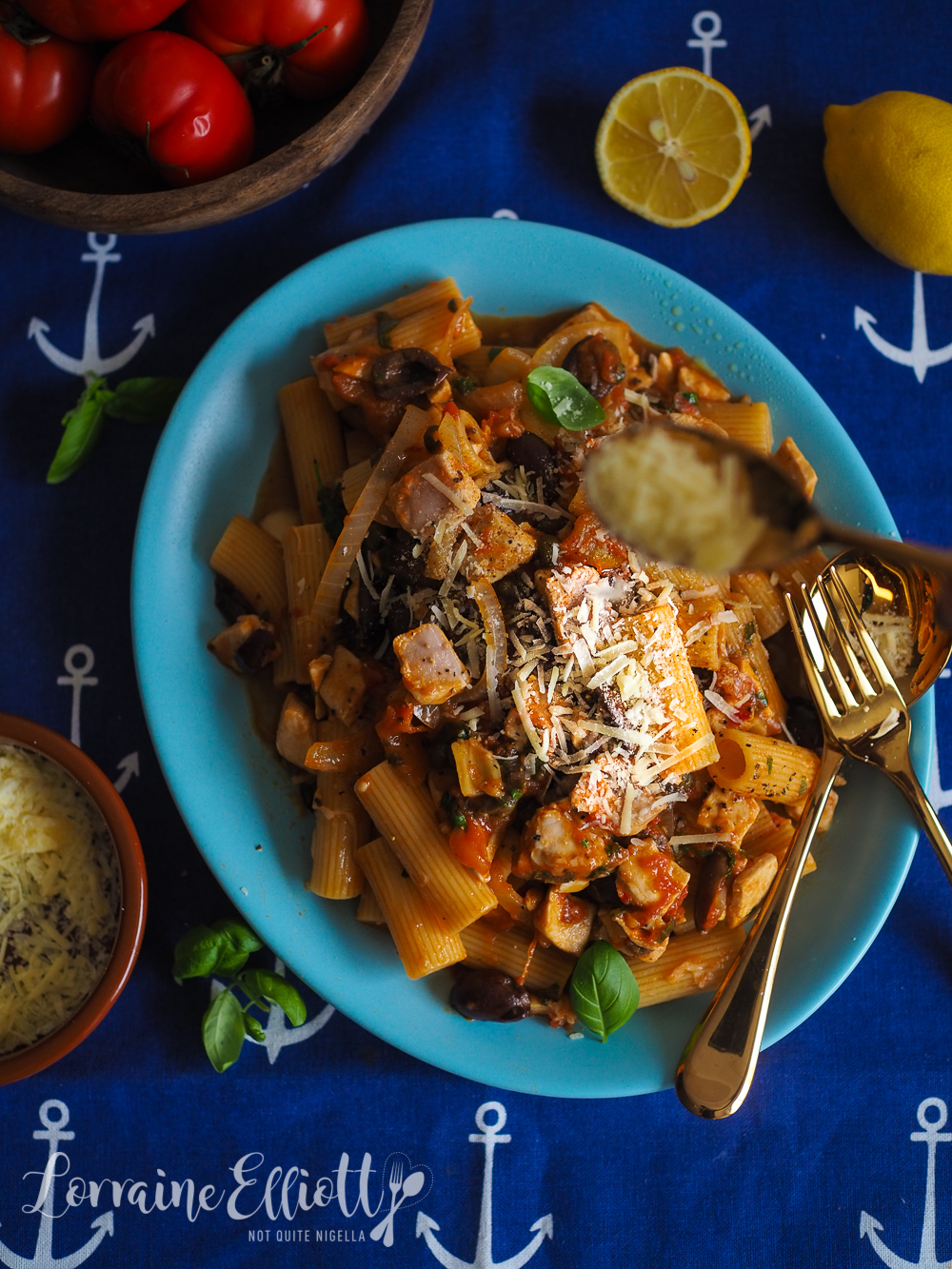 Monica's addition of bottarga on top generously seasons this Pasta all'Eoliana with even more umami from the sea. If you find it hard to get bottarga or if it simply isn't in your budget use parmesan cheese. One would typically use Aeolian capers which are smaller capers but if these also prove difficult to procure, try baby capers.

Usually this is done with long pasta but I really liked this the way that Monica did it with rigatoni as the tiny capers and sauce hide inside the tubes.

Monica says that you can sub sashimi tuna for swordfish cubes but then you need to cook it fully along with the tomato sauce. And you can also sub tinned tuna to make a pasta al tonno.

Capers are little powerhouses of flavour. They're tiny but mighty for flavour. I joke that they're like Sophia Petrillo from the Golden Girls (one of the favourite shows of Monica and mine). She's small but salty and not shy and sharp on the tongue. 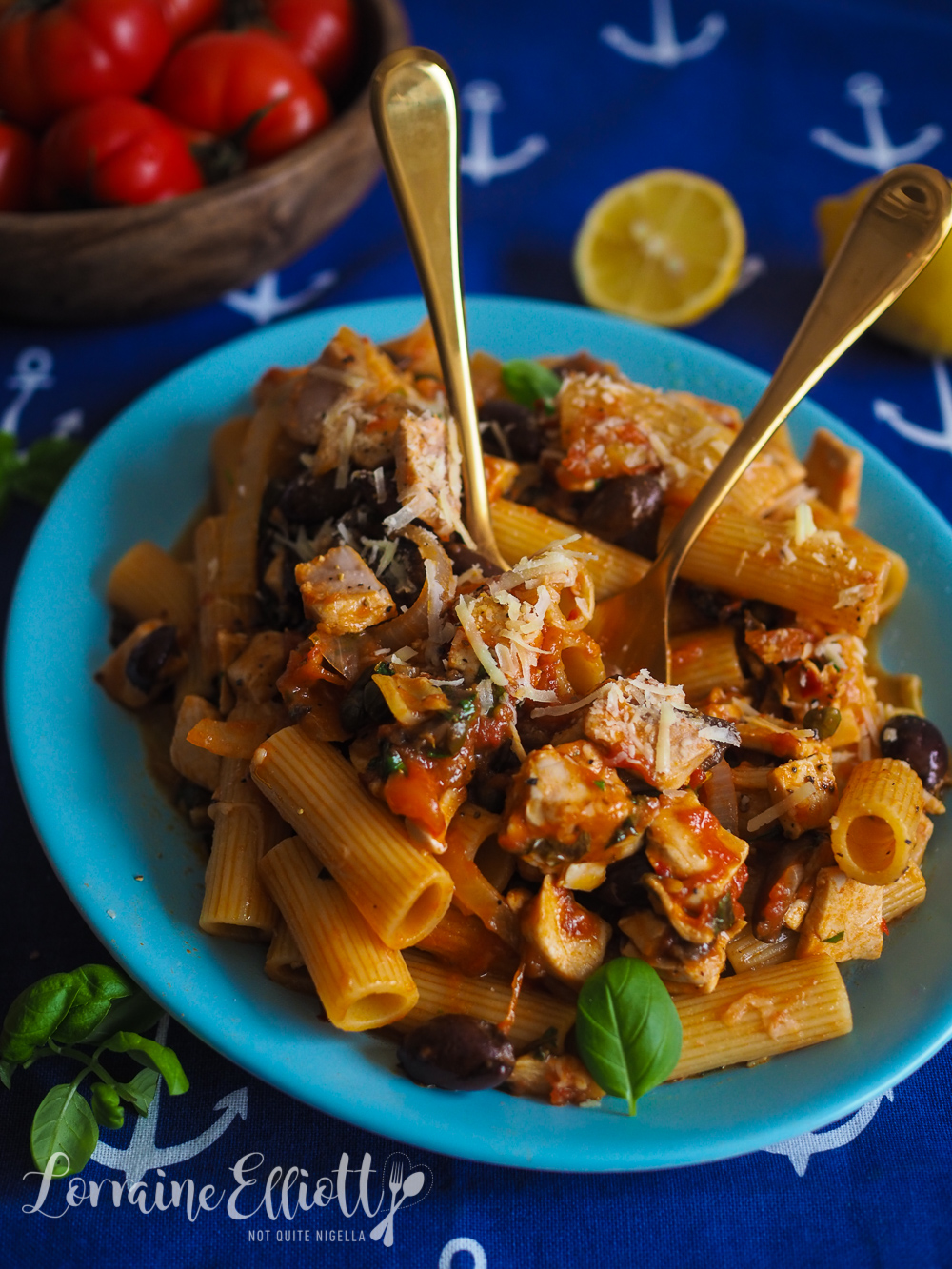 If we're going with this Golden Girls metaphor, in this dish Dorothy is the olives because she's just as salty as Sophia but bigger in size. The lush tuna is Blanche Devereaux because she was always wearing a silky pantsuit and Rose is the tomatoes, all sweet and blushing. We even discussed going as the Golden Girls this Halloween. Apparently I'm totally a Blanche and Monica is a Sophia!

So tell me Dear Reader, were you a Golden Girls fan? Which Golden Girl would you get dressed up as? Have you ever tried Pasta alla Eoliana? 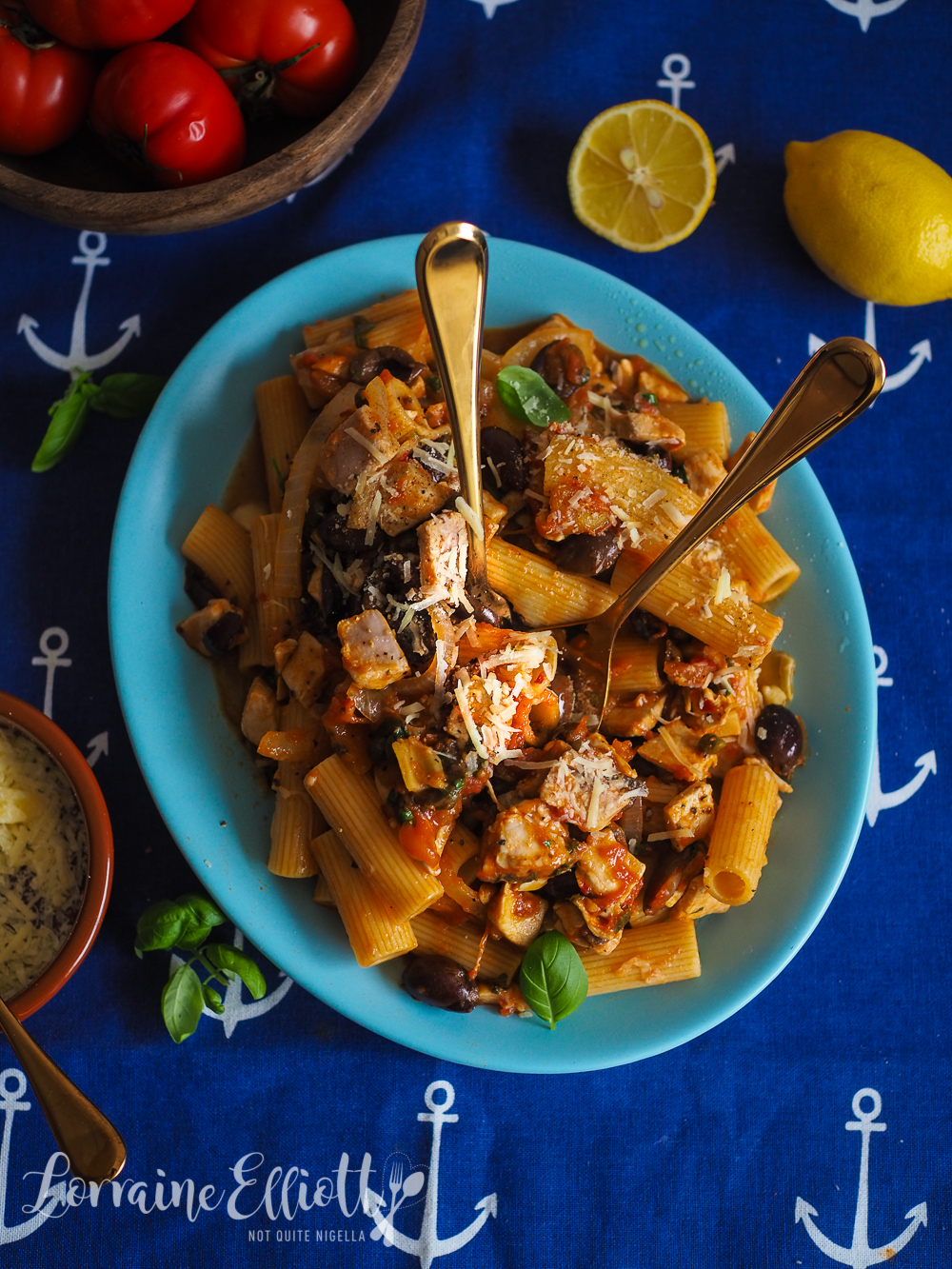 An Original Recipe by Lorraine Elliott, adapted from Monica Luppi 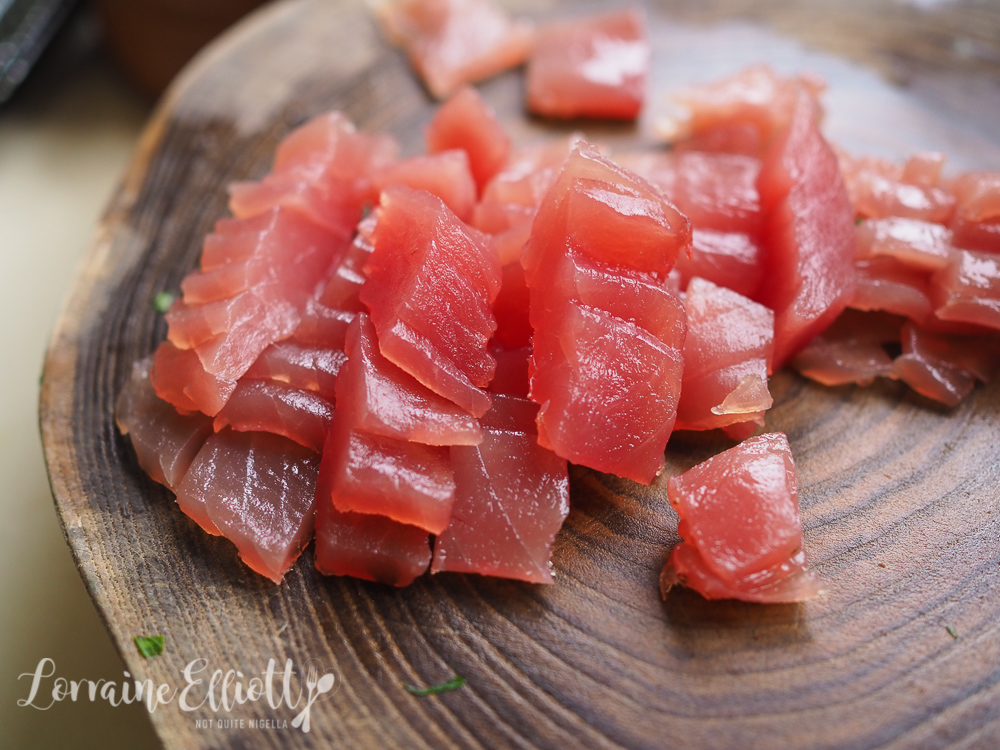 Step 1 - Heat oil in a large pot and add the onion and saute on medium heat until softened. Add the garlic and saute for 1-2 minutes. Add the tomatoes, white wine, olives, capers and chilli flakes and simmer until reduced for around 15 minutes. Test for seasoning-add a little sugar if the tomatoes aren't sweet enough and add salt and pepper to taste. 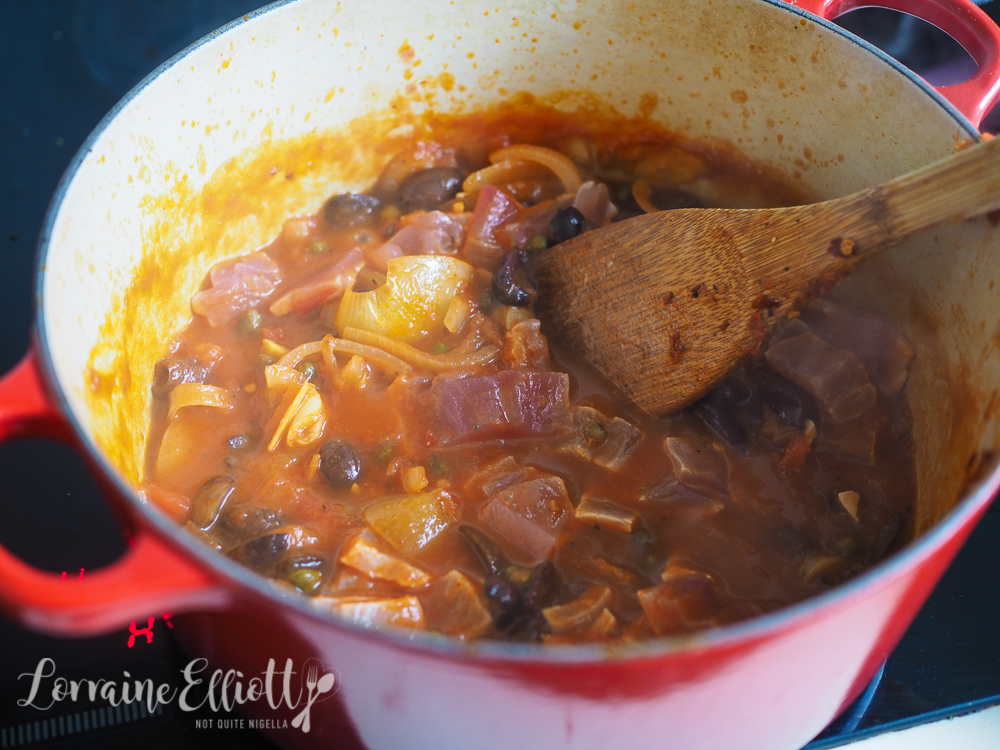 Step 2 - While the sauce is cooking, cook the pasta in a big pot of salted boiling water. Drain and reserve a cup of pasta cooking water (I didn't need it but if your sauce is to thick, it helps). Add the pasta to the sauce and stir to coat adding some more olive oil. Then take it off the heat and add the tuna and stir gently and cook until tuna is cooked on the outside but still pink in the centre (a couple of minutes should be enough). Add the herbs and stir and spoon onto a serving plate. Shave parmesan or bottarga on top.