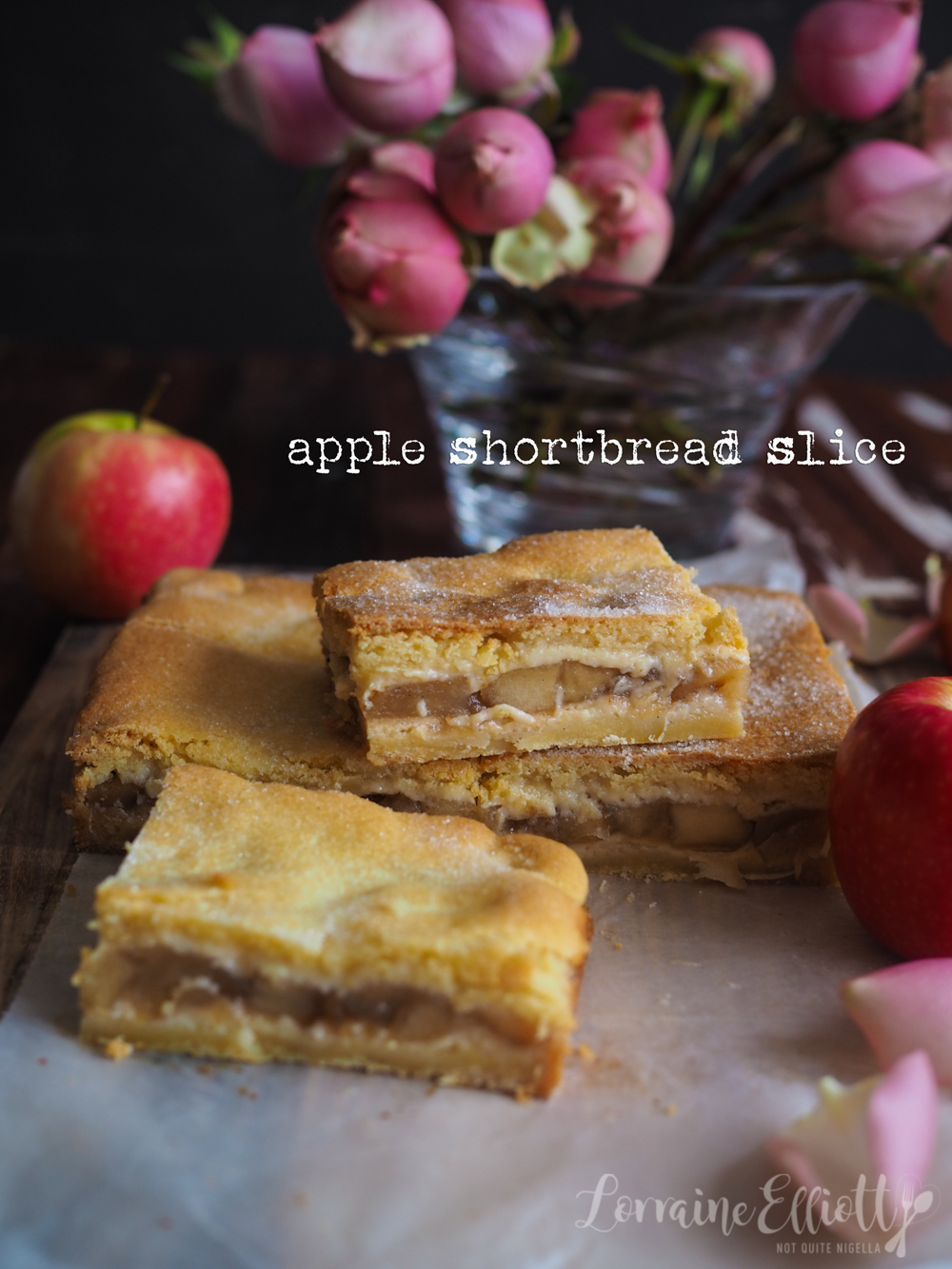 This double layered apple shortbread slice is another classic Australian slice recipe! A top and bottom layer of shortbread dough encases a layer of delicious cinnamon apples. It's perfect for an afternoon tea, lunchbox or dessert served with ice cream and is a definite crowd pleaser! This is a pushy recipe Dear Reader, especially if you enjoy traditional Aussie slices!

Last month I made the traditional Australian apple slice with sour cream (which is one of my favourite things on earth!) and a few people mentioned how much they also enjoyed the shortbread apple slice so I decided to make this too as we have so many apples. The key to this shortbread apple slice is cooking the base first so that it completely cooks and isn't doughy. If you bake the whole thing at once, the bottom layer will be a bit raw and underdone. 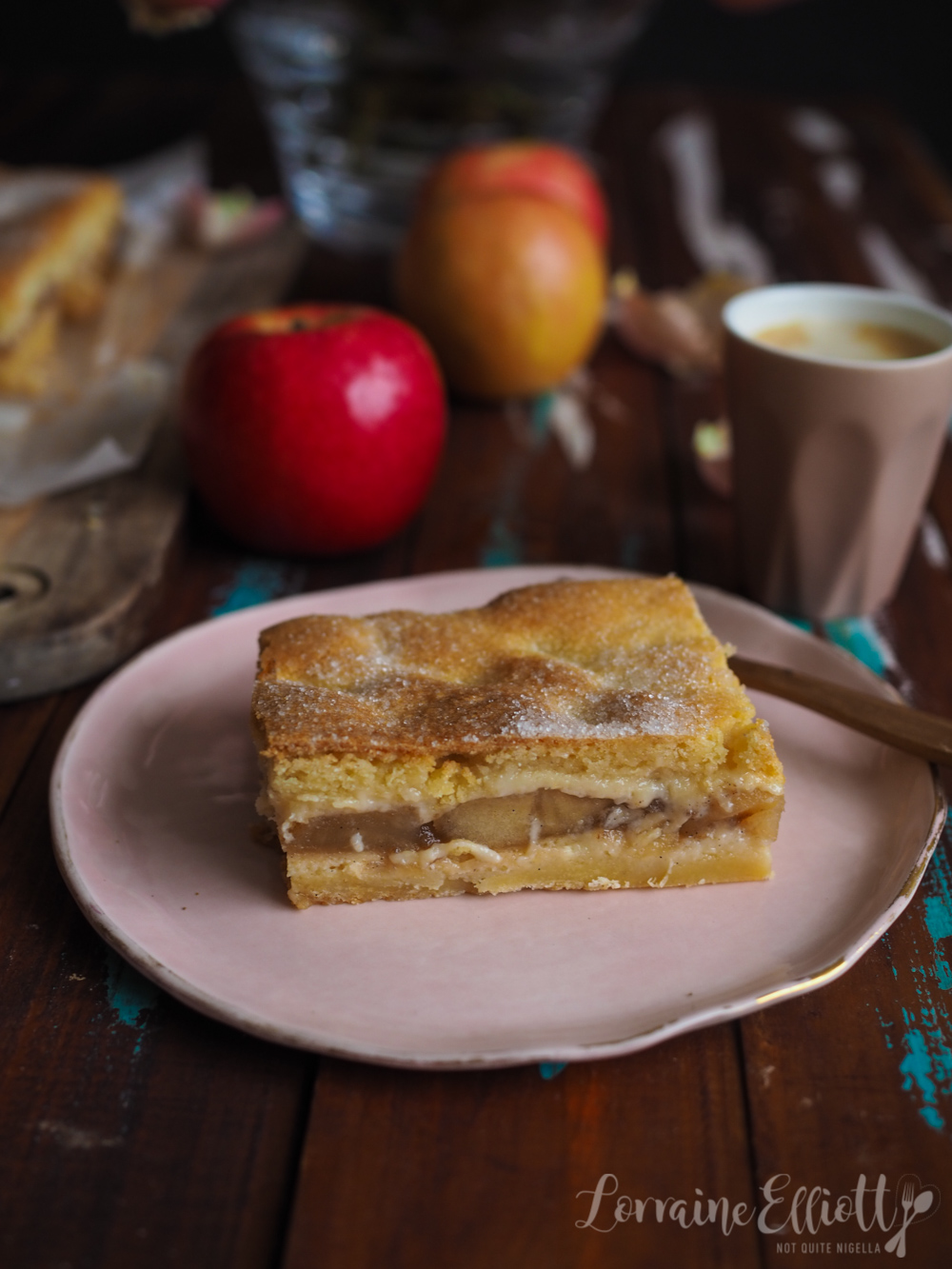 I am really enjoying making this whole series of Australian slices. There's a reason why some things are classics and that's because they're delicious. The added advantage of slices is that they're easy and make plenty which is good for when you want to feed a crowd or don't have time to make fiddly things.

How to Prepare Apples for Pies and Slices:

While you can use tinned apples, fresh apples are abundant, especially in winter when there are less varieties of fruit available. Here's how to cook apples for slices:

1 - Take 8 small to medium apples (mine were 120g/4ozs each). Cut the apples in half and core them with a melon baller or use an apple corer 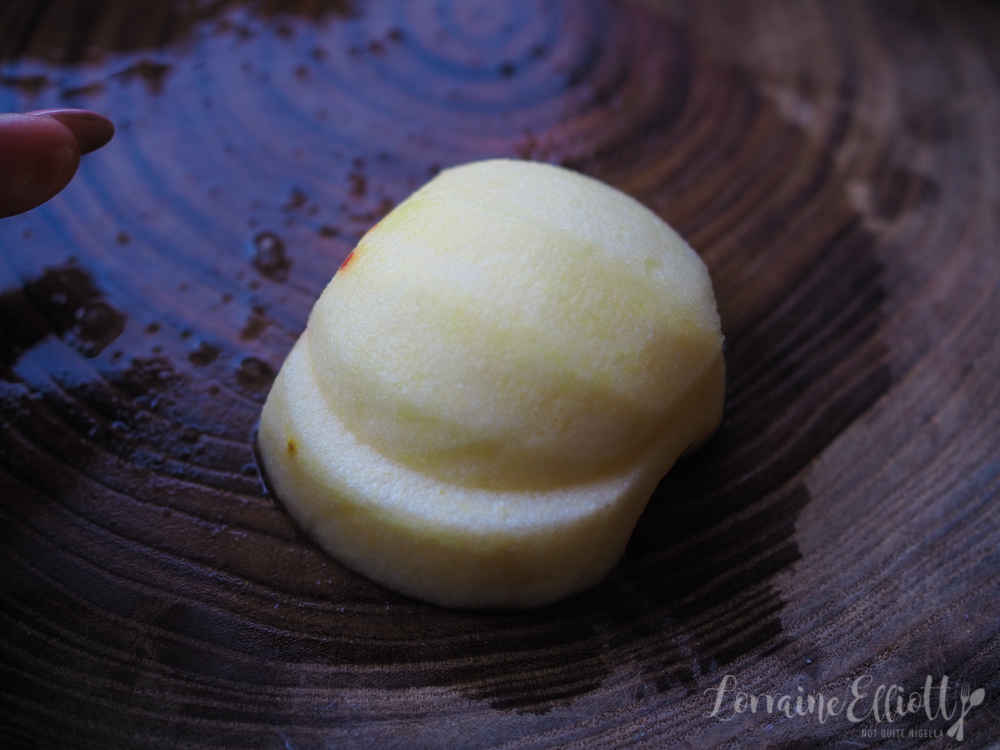 2 - Cut each apple half into half horizontally and then cut it into 9 pieces in a hatch pattern. 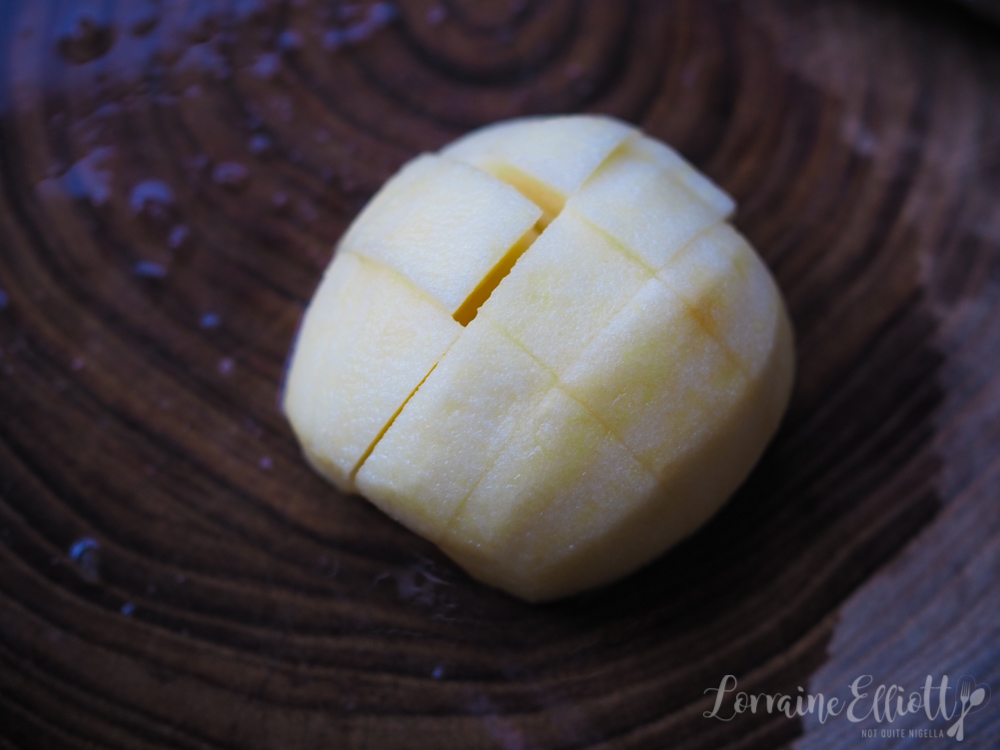 3- Place them in a saucepan with 1/4 cup of sugar, 1/4 cup of water and 1 teaspoon of cinnamon. Bring to a boil and simmer gently until soft but not mushy. Add in 1 teaspoon vanilla and cool. 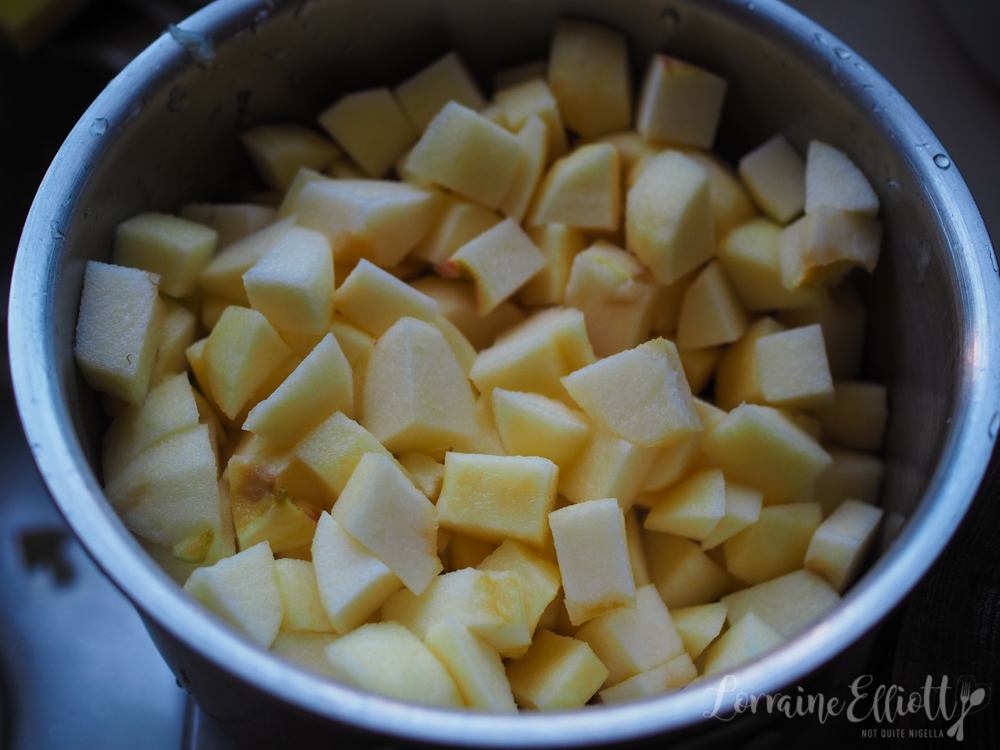 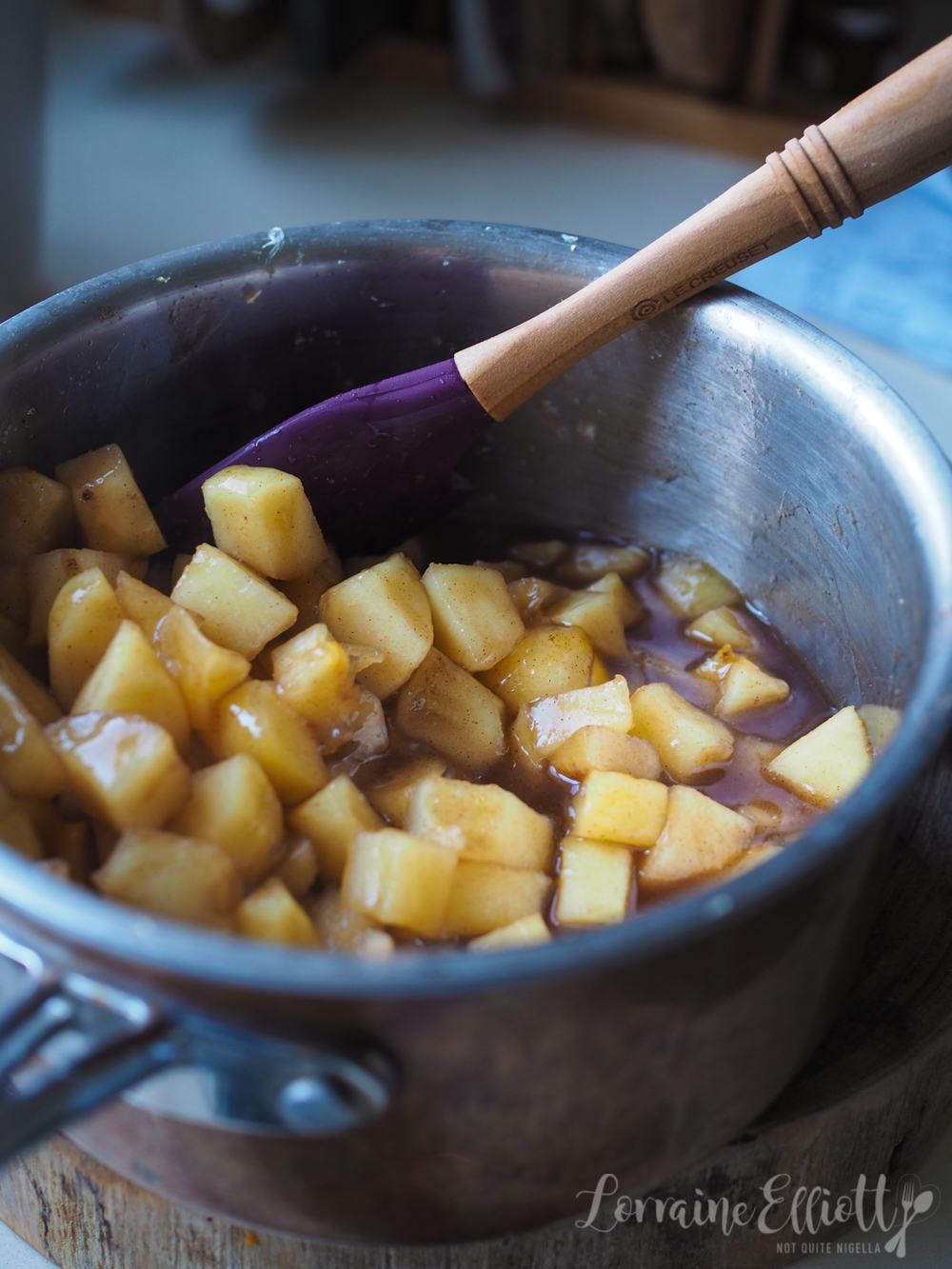 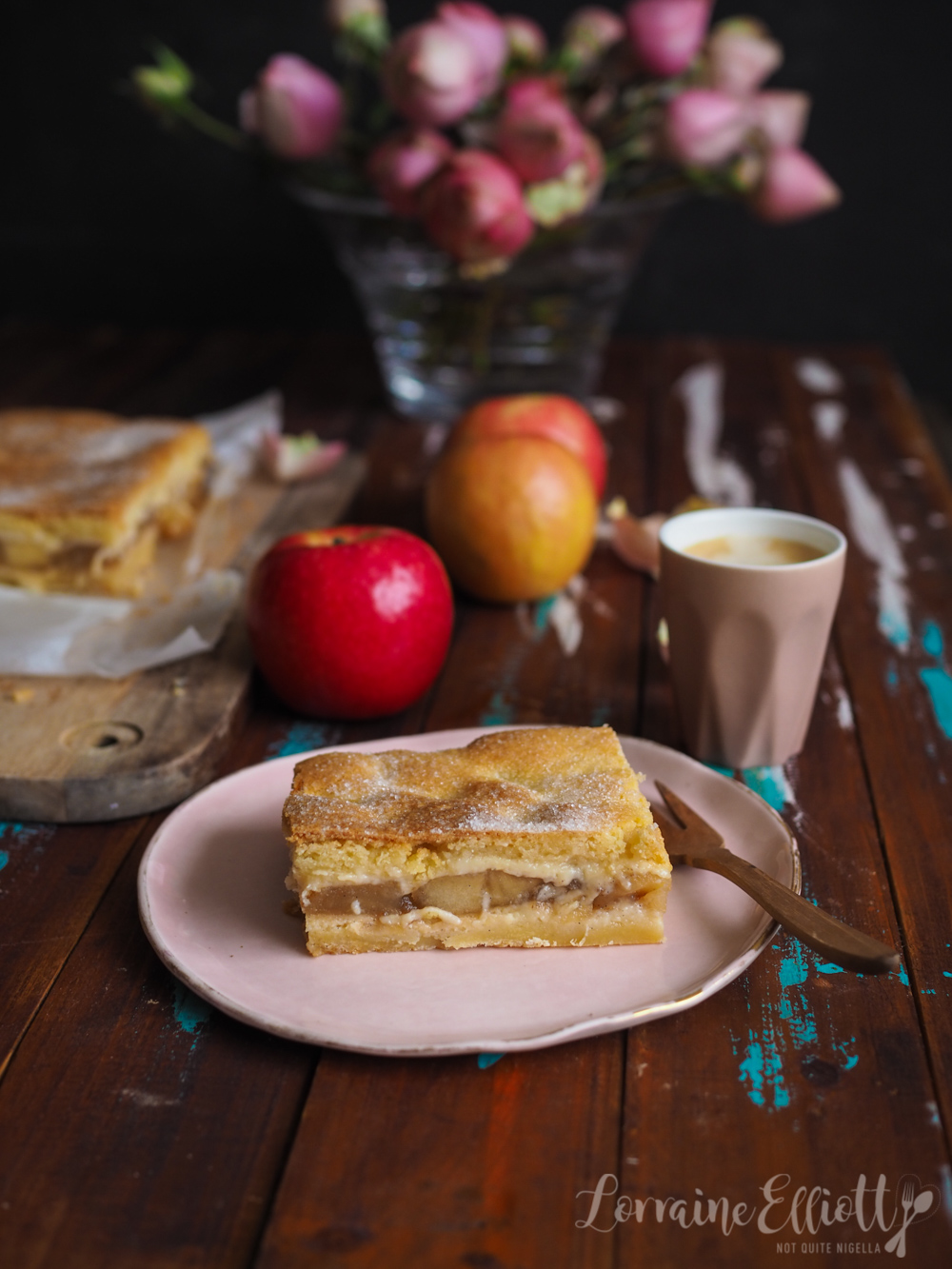 I cannot tell you how pleasurable making these slices are. Whilst I love the whimsy of fantastical creations, sometimes you just want something to be easy and delicious and this slice was just that. I served it as it was for afternoon tea and I also served it with ice cream for dessert. It's easy to whip up on short notice too, especially if the apples are already cooked (I always seem to have a container of these because I get so many apples in my vege box) or you use tinned apples.

Sometimes tasks are simple but seem insurmountable. Sort of like the growing pile of apples in my fruit bowl. Mr NQN has some definite strengths but handyman tasks are not one of them and I'm just as hopeless at that sort of thing. For the past few months we've had a dripping shower head. It's not annoying enough to have to do something serious about but it's annoying enough to niggle at you when you have a shower and tug at your attention if you're in a hurry and trying to get out the door. 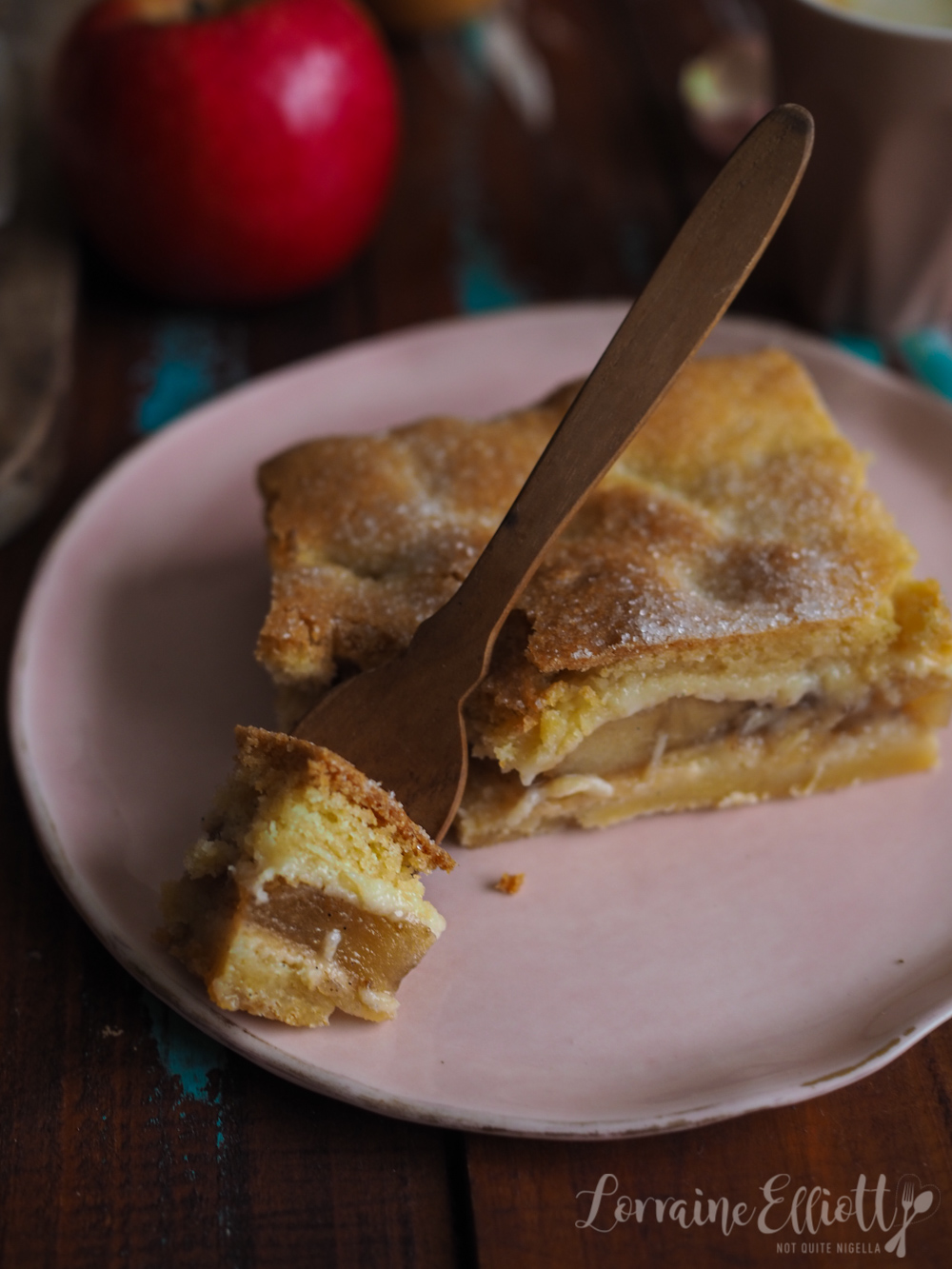 "Get an airtasker or a fiverr," suggested Monica one day, "It helps get S@*% done." She gets Sherpas and Airtaskers all the time to do little jobs around her house that she doesn't have the time to do. I was a bit nervous because the last time I got a handyman in he was a disaster but she explained that you could read reviews on the people before booking them (I promise this isn't an ad!). I put up an ad for a plumber one day and estimated how much it would cost. Someone responded straight away but at an exorbitant price almost twice what I offered (which upon later searching was on the high end of the scale already). Then a guy responded with a reasonable price. He had great reviews so I figured why not. Pushing aside the episodes of Law & Order SVU that I had been watching out of my head, I gave him our address making sure that Mr NQN would be home (again SVU).

The next day he turned up on the dot and fixed our leaky shower. He also told us that he didn't need to use the replacement taps that Mr NQN had bought so in a way he saved us money while getting the job done. Next time we have a plumbing issue we'll give him a call instead of waiting for months to do it ourselves. As for me I'll stick to the slice making, Mr NQN will stick to his data science and we will outsource the rest!

So tell me Dear Reader, do you ever outsource jobs? What is your core competency? Are you more likely to make something like a slice over a cake? 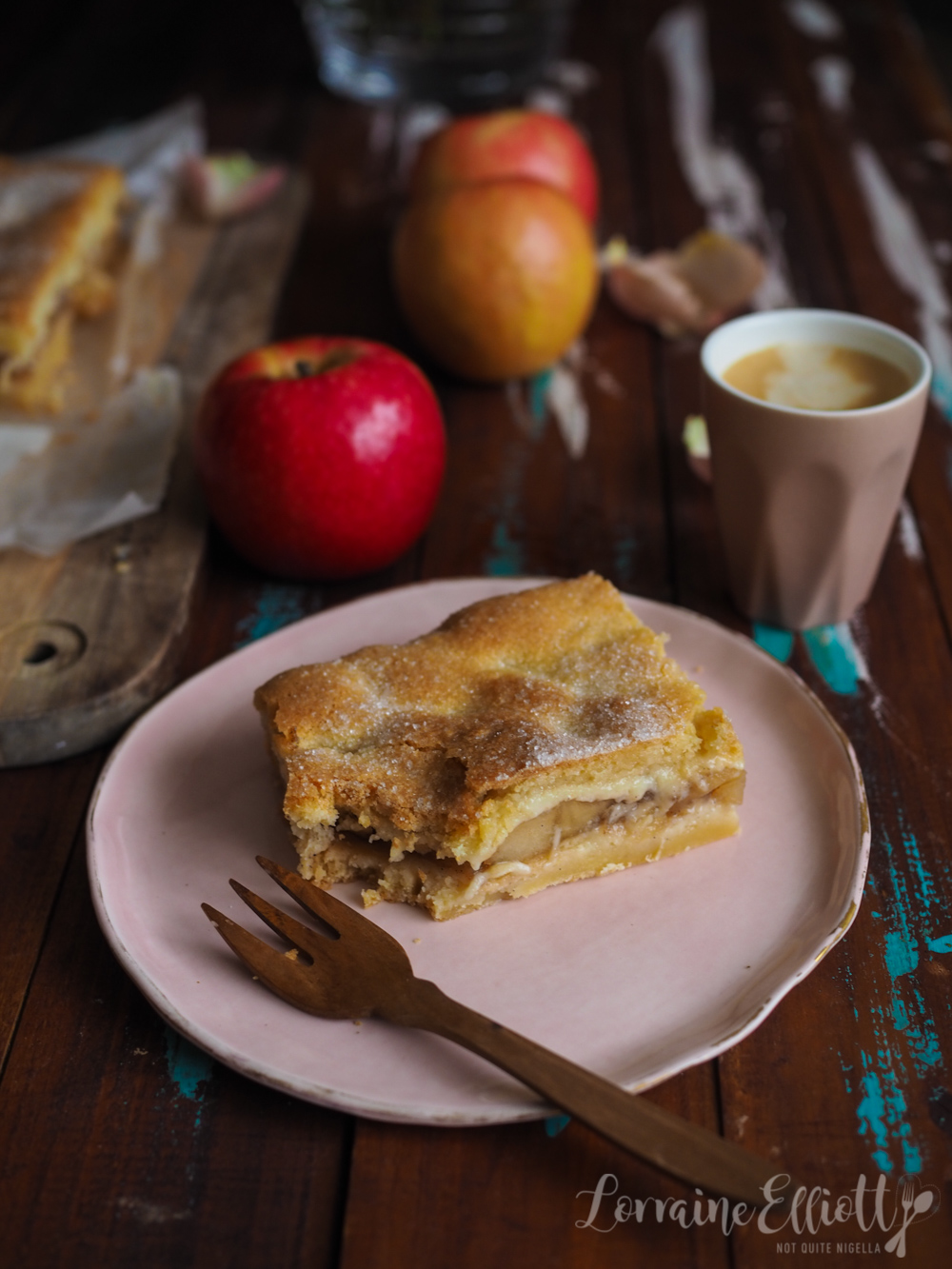 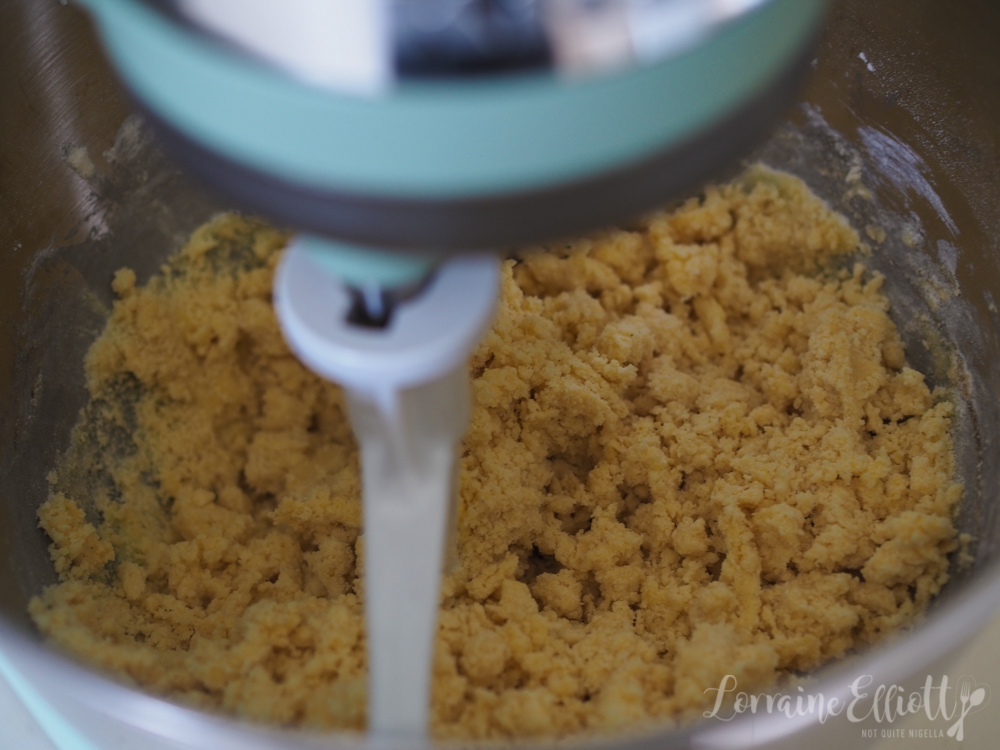 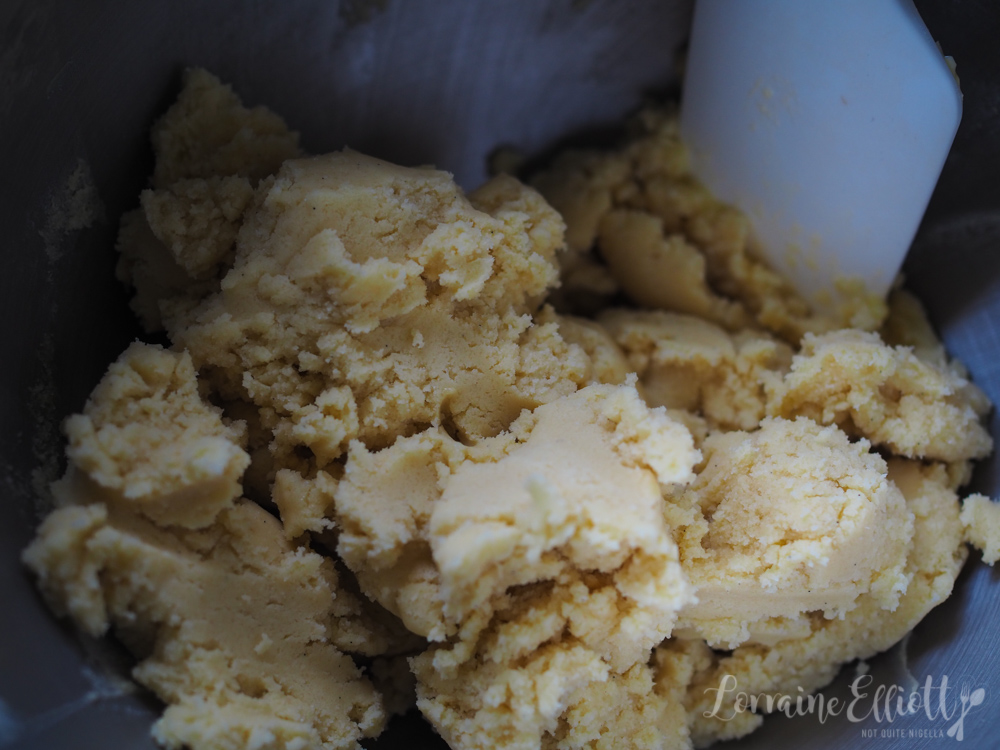 Step 1 - Cream the butter and sugar together for 3 minutes until pale and fluffy. Add egg and beat until incorporated. Whisk the flour and baking powder together and add to the mixer bowl and beat this into the butter mixture along with the vanilla bean paste and salt. 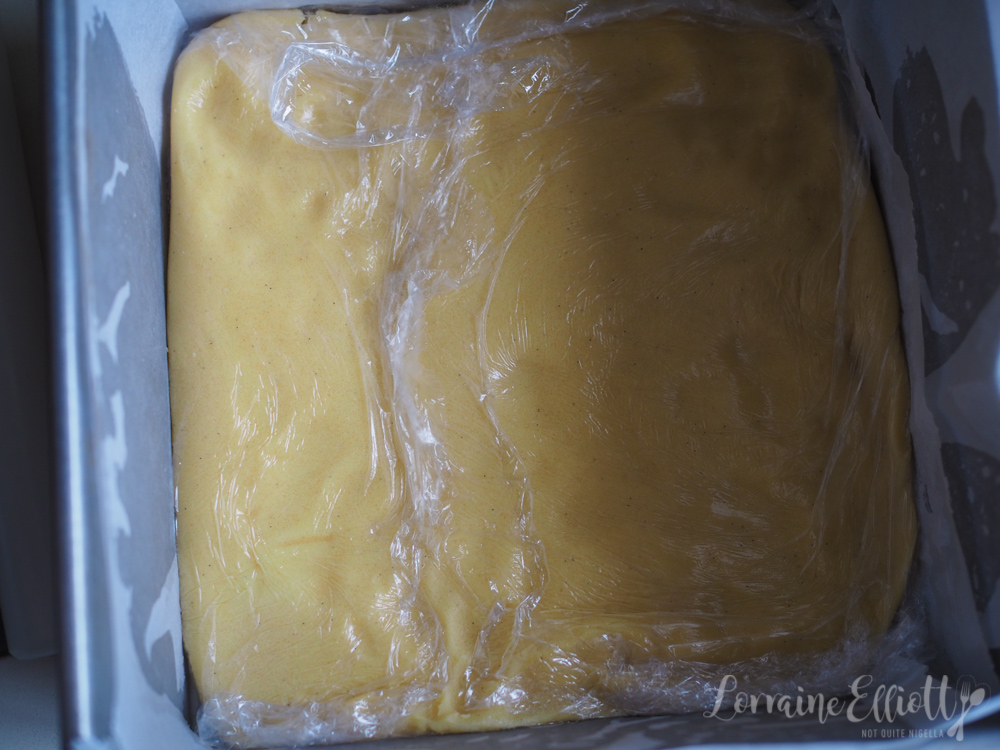 Step 2 - Divide the dough in half and wrap in cling film flattening it in the film and rolling it out and shaping it so that it fits the tin (it's easier to do it now rather than when it is firm, trust me haha). Place in the fridge to firm up for 30 minutes. 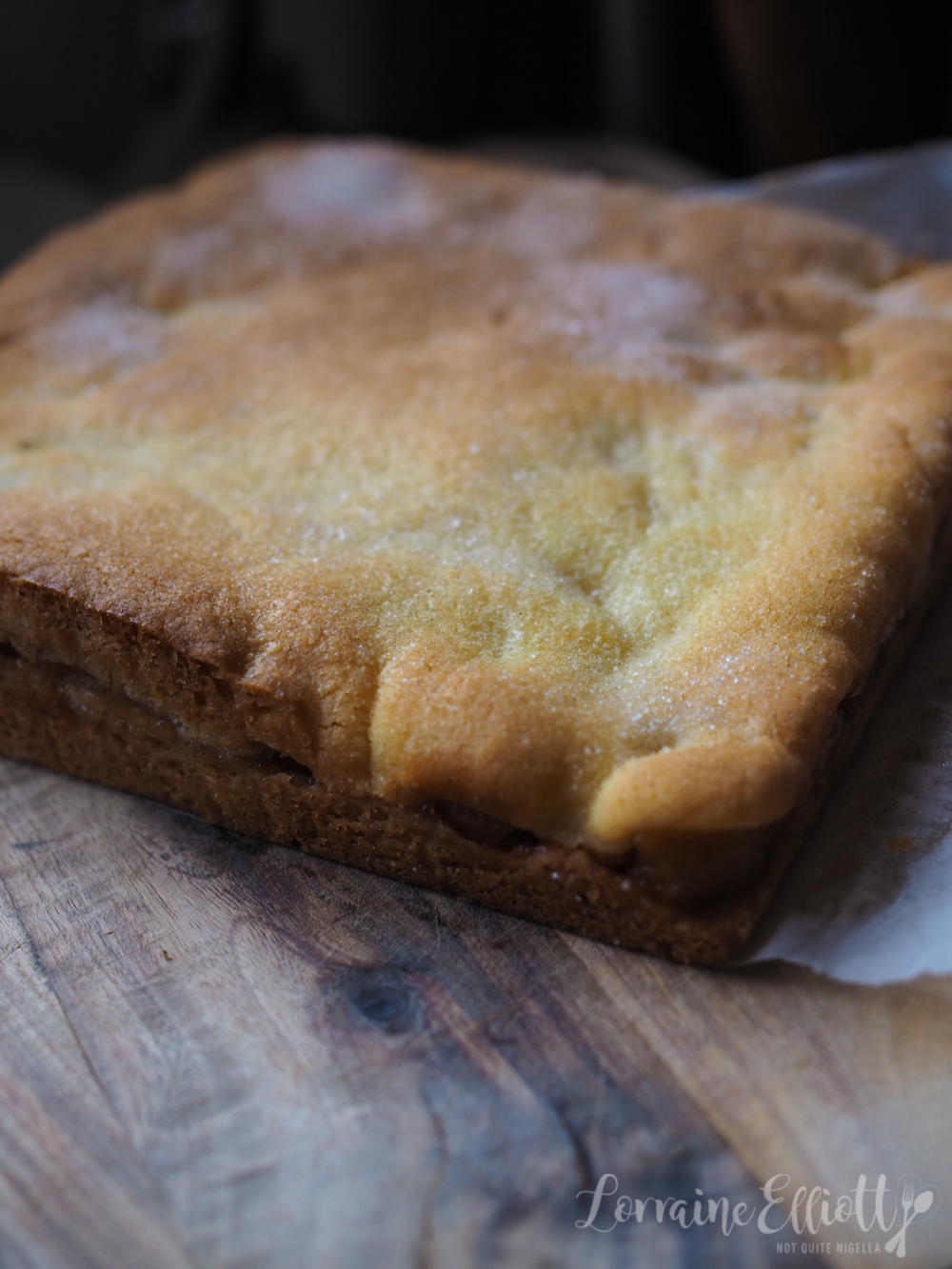 Step 3 - Preheat oven to 160C/320F. Line a 20x20cm/8inch square tin with parchment on the base and sides. Place one of the shortbread dough squares in the tin and bake for 20 minutes. Then layer with apples making sure to get a single layer of apples over the whole base. Place the second shortbread dough square on top and sprinkle with sugar. Bake at 170C/338F for 20-25 minutes or until golden (rotate the tray halfway if necessary). Cool and then cut into squares or rectangles. 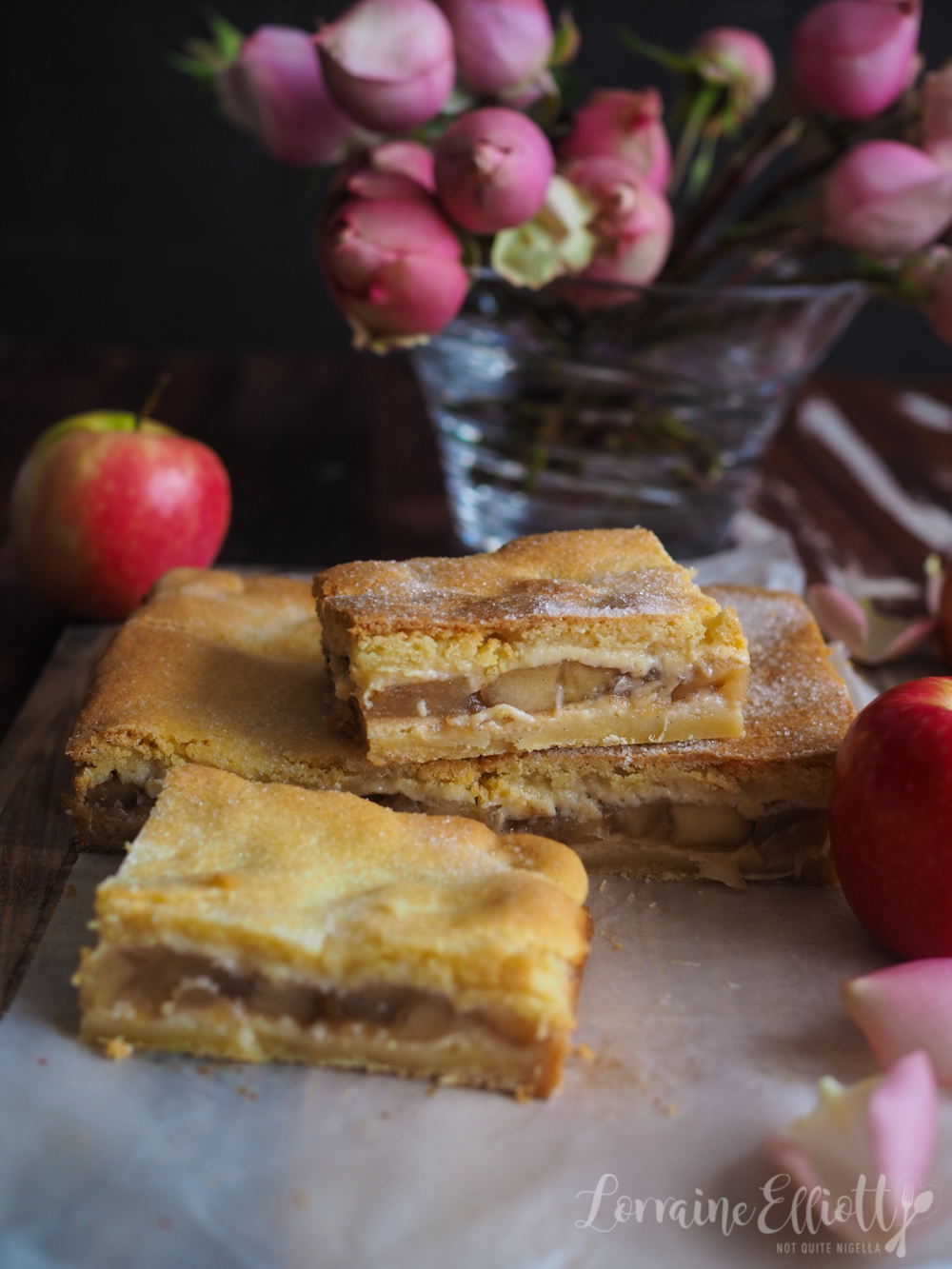